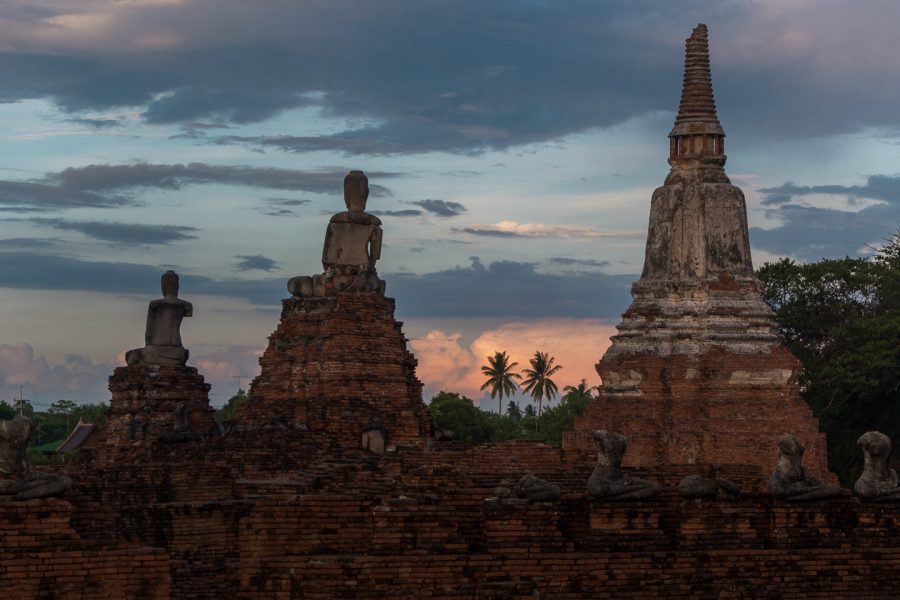 Today, I’ve been visiting a temple, it has been a long time. Phra Nakhon Si Ayutthaya is THE city for old temples apparently. There few of them in the same area. A part that, I cycled from very early this morning until the next petrol station, stayed there most of the day before I headed to temple to catch the sunset. After the visit I struggled a bit to find my next 5 stars hotel but as always, I found it! :-) 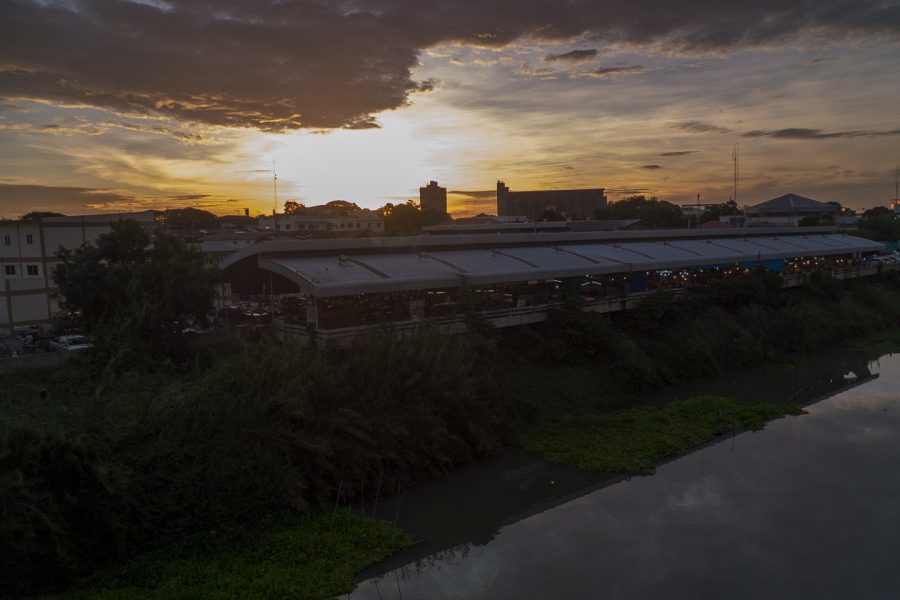 After 2 nights spent in Tha Rua I keep on cycling towards Bangkok. I left early this morning because the cafe opens at 6am and I didn’t want to bother the staff or even be seen. That’s good because I can enjoy the fresh morning :-) 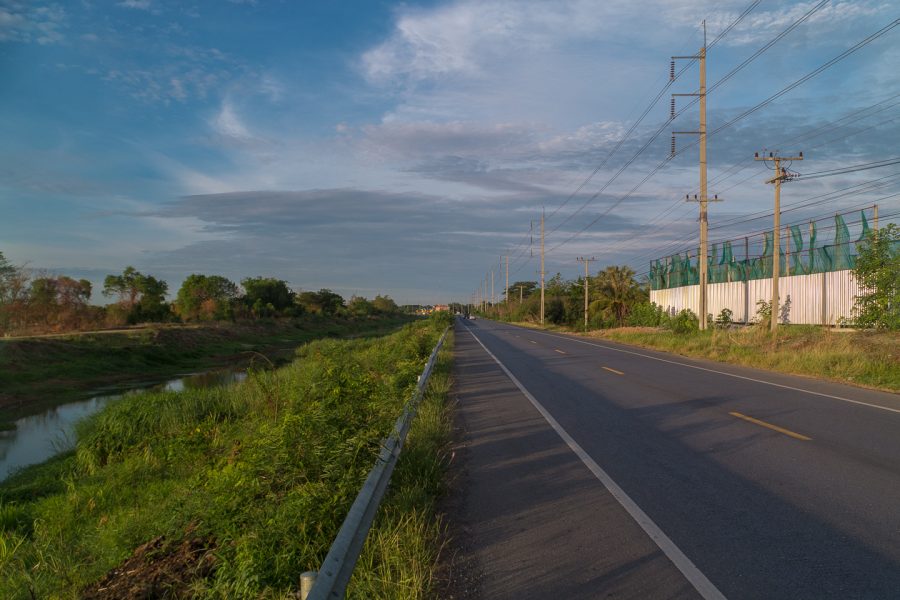 I’m on a small road this morning, travelling along a river, that’s nice. 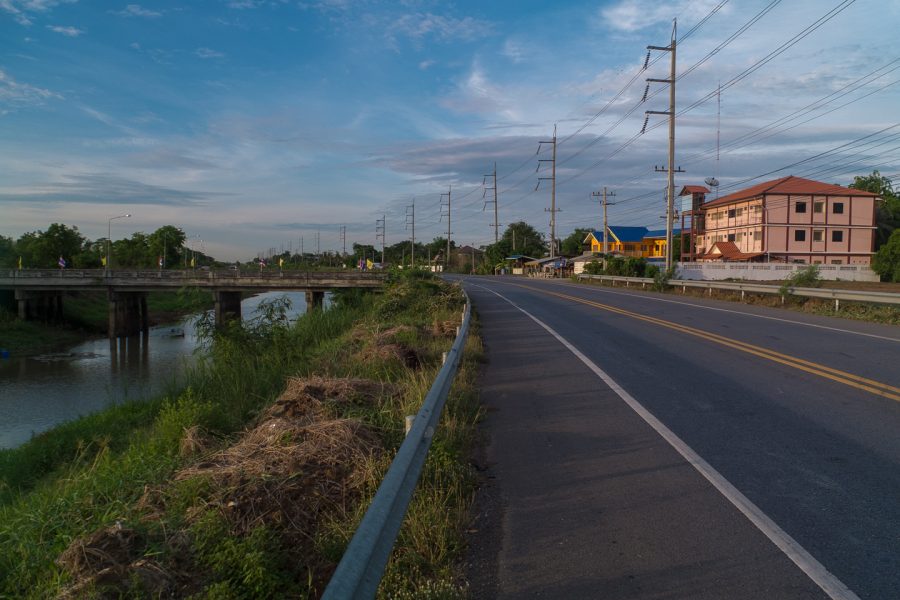 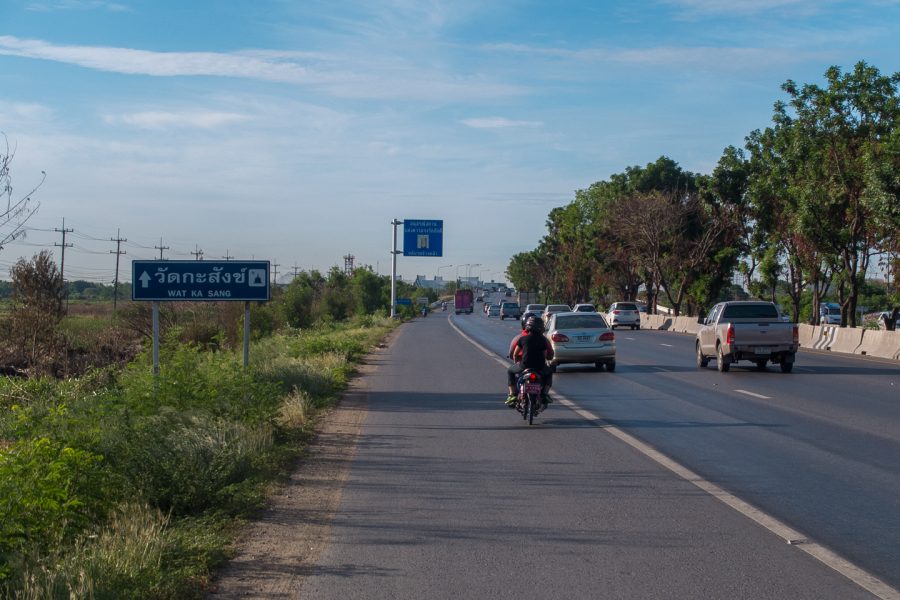 About 40km later, I’ve just reached the highway again but not for a long time because the next petrol station is almost there. 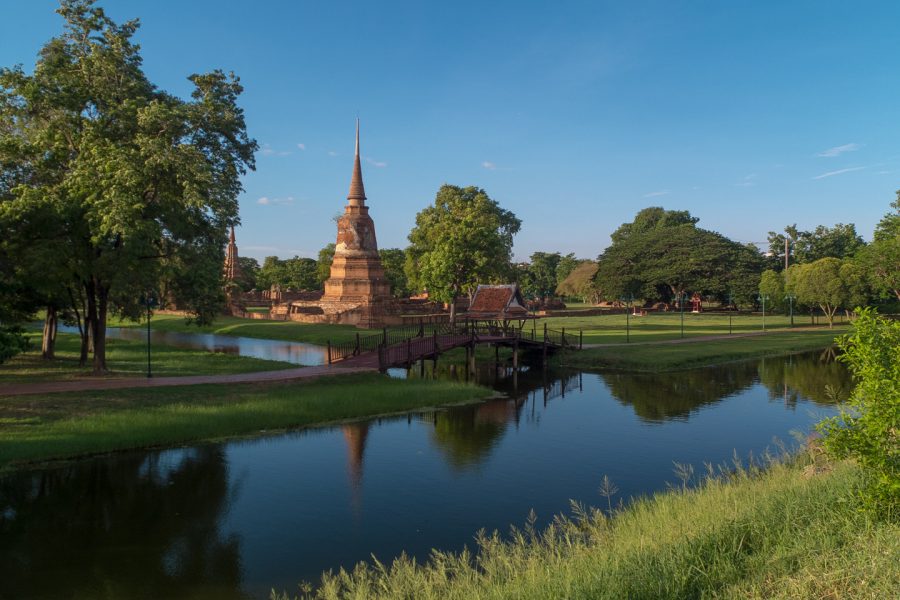 We jump right on this later afternoon!
I’m now in Phra Nakhon Si Ayutthaya. I left the cafe a bit earlier than usual because I want to visit a temple, not this one. 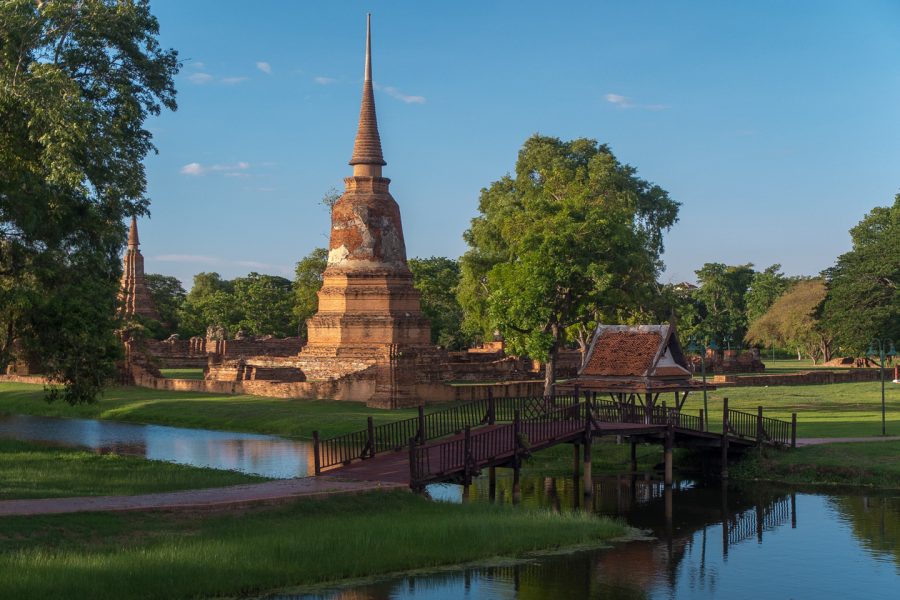 This garden looks good. Could it be my campground for tonight? I doubt. It might be guarded at night. 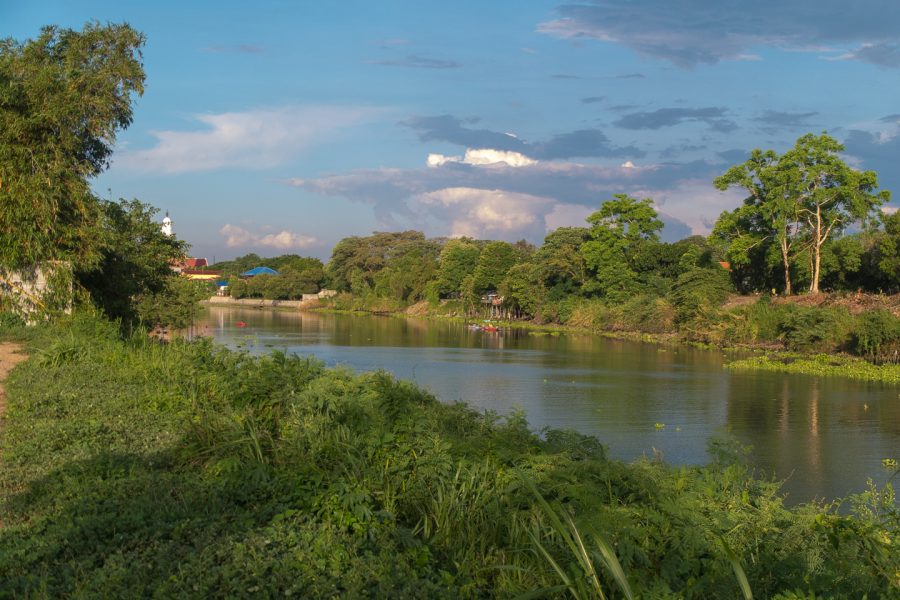 The river again! Maybe not the same one. The temple is on the other side, not very far from here. 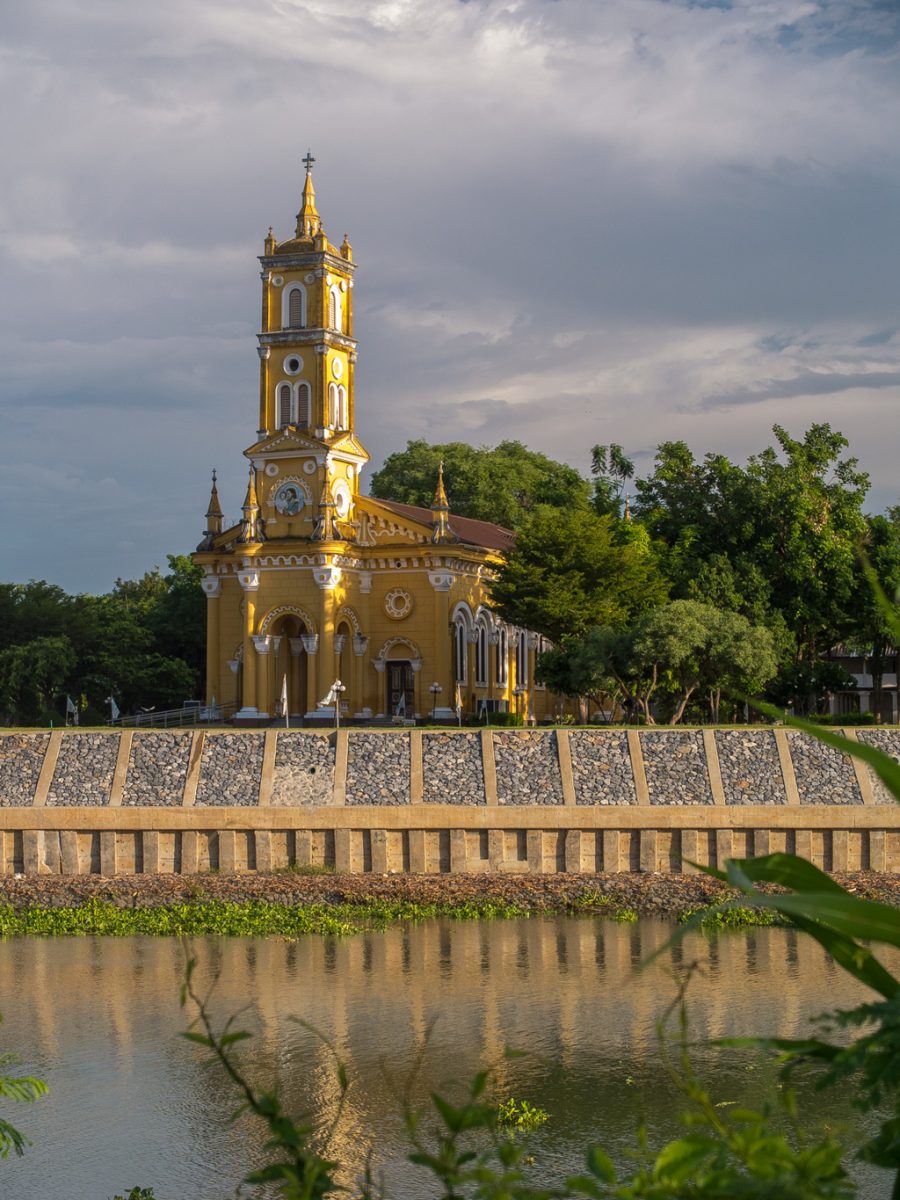 Church! To me, it looks like the ones from south America. Very bright colours. 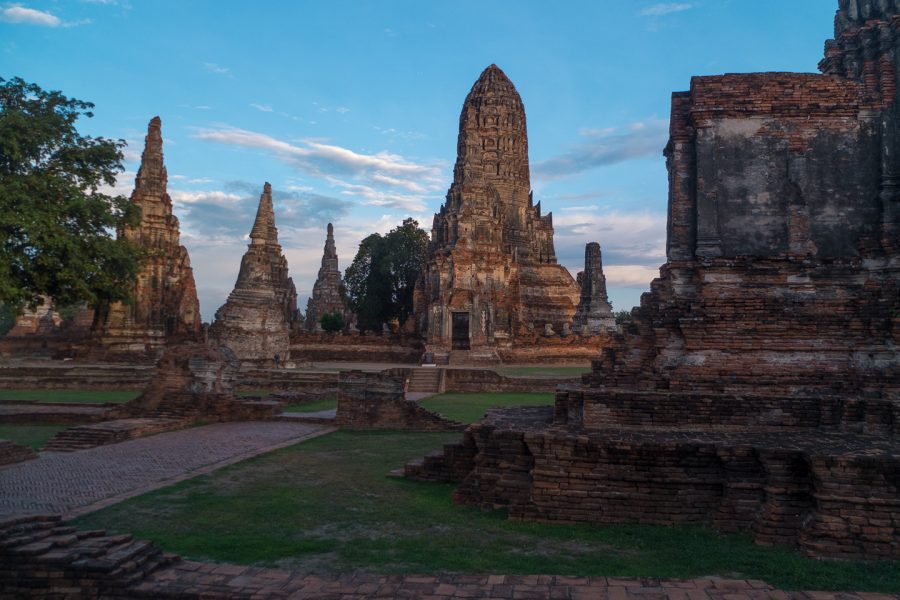 That’s the one :-) It’s called “Chai Watthanaram Temple“. There is few of them in this area but I will visit only this one. The entrance was 50 baht so yes, one is enough :-) 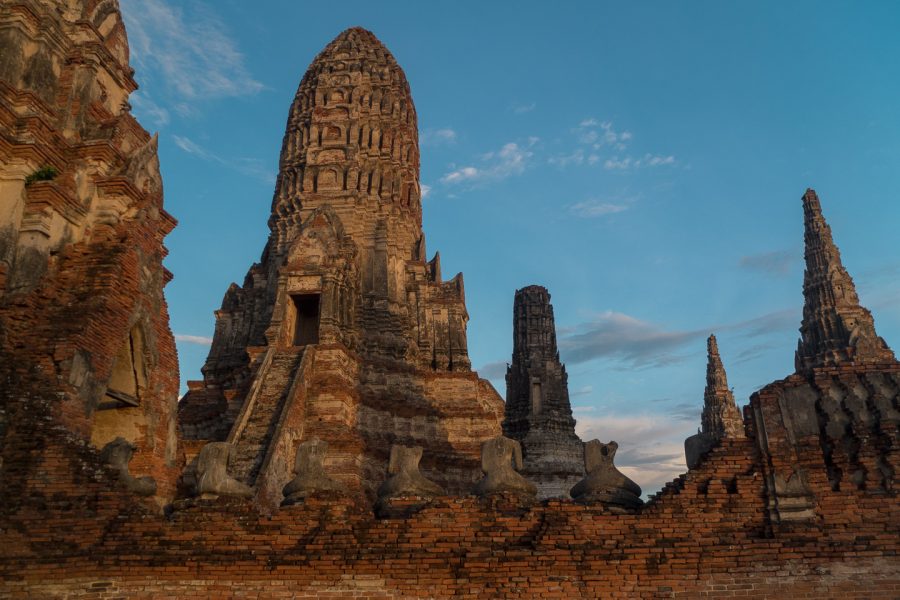 A lot more impressive than most of the “new” temples around the country. 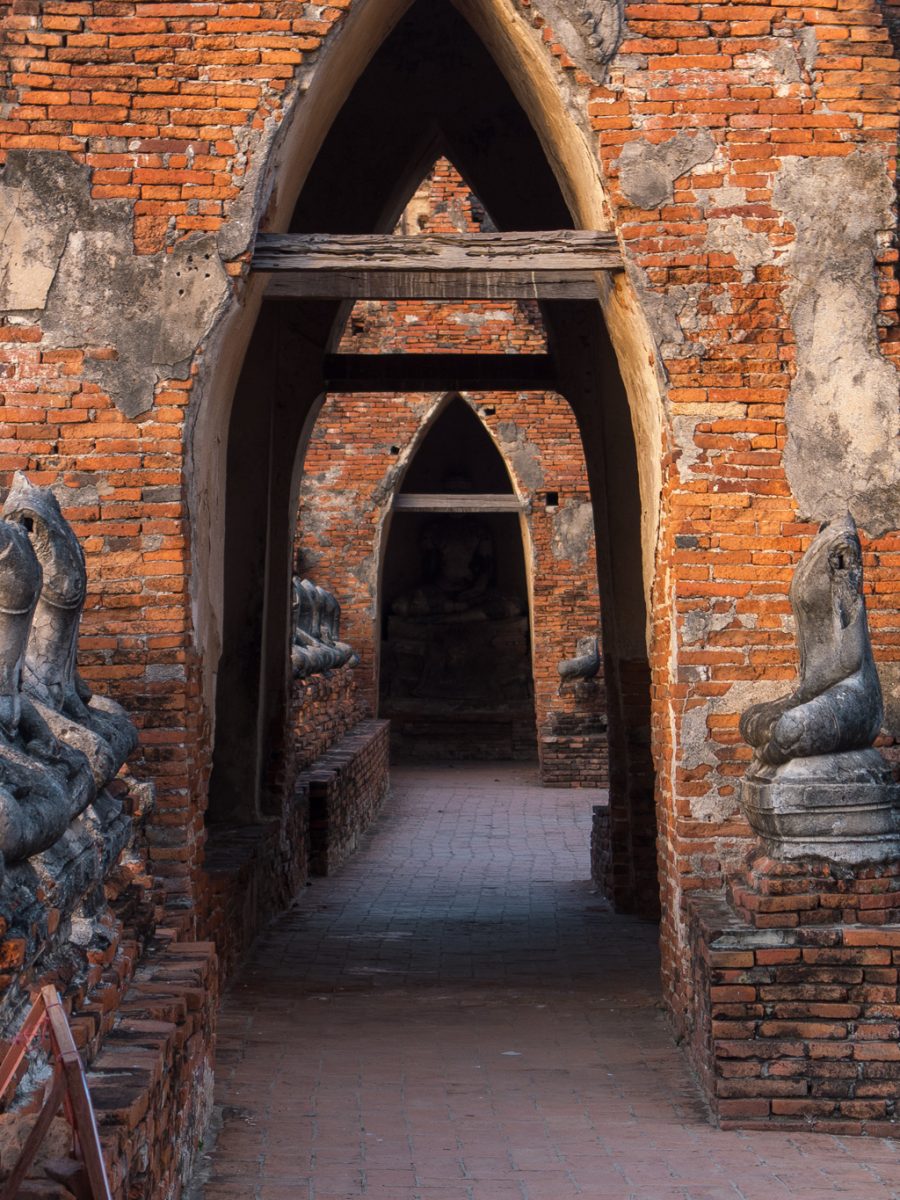 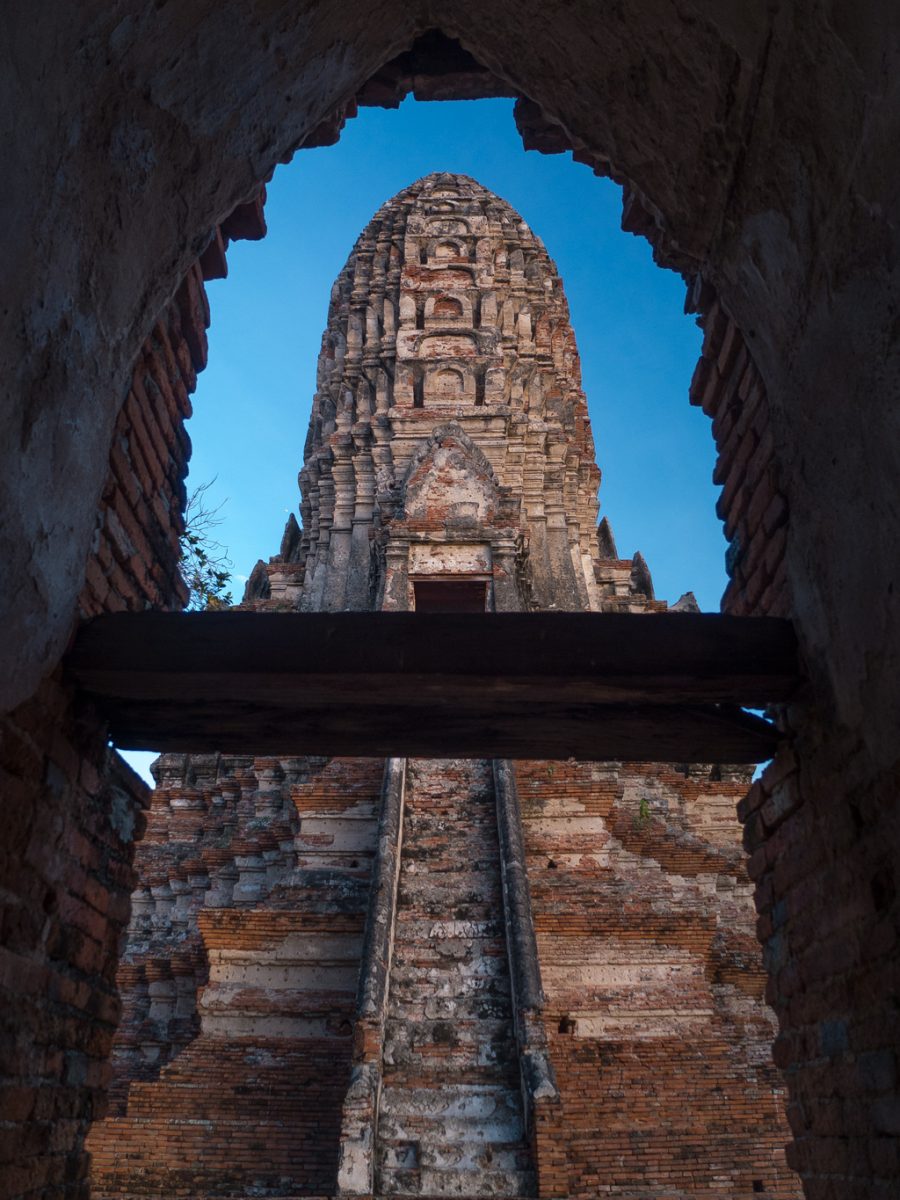 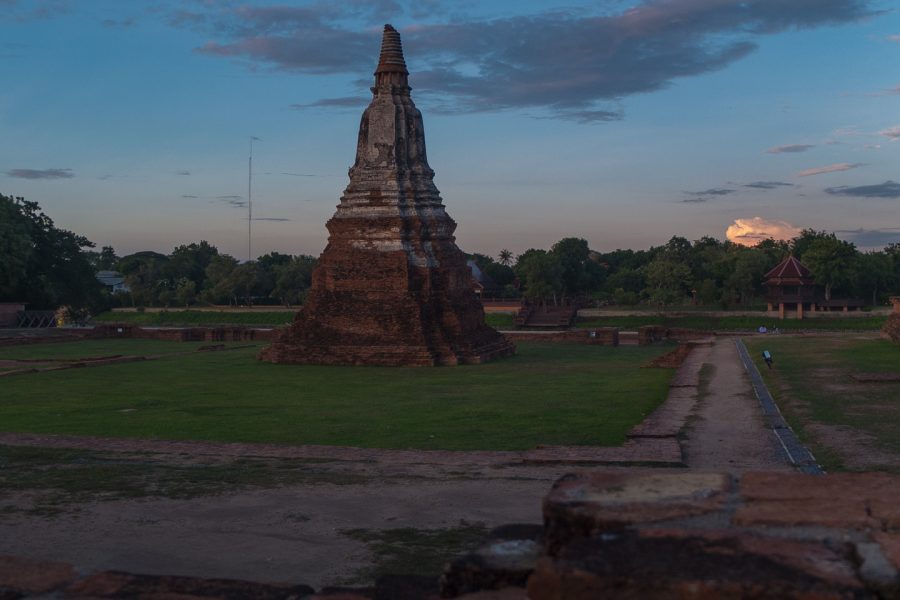 The garden and the river at the back (you will see it very soon). 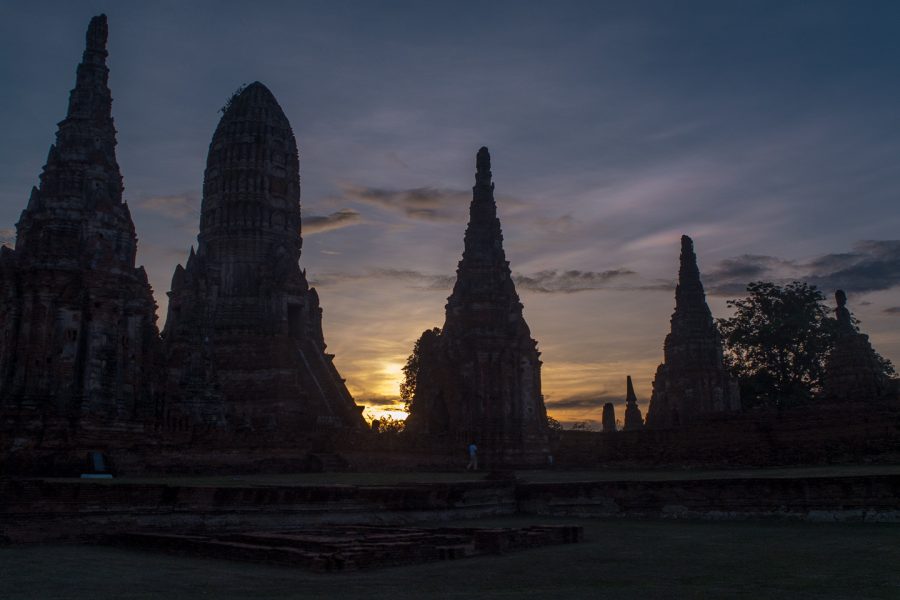 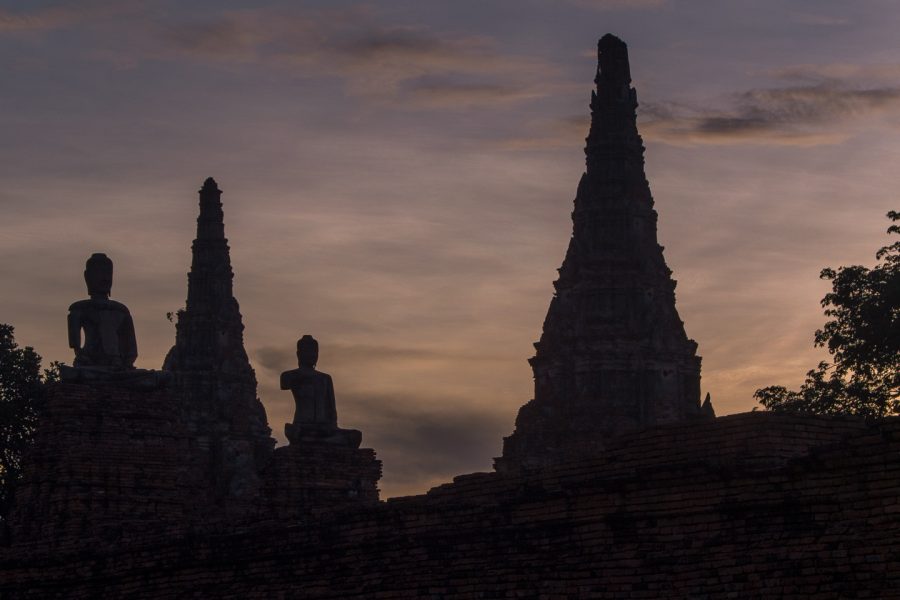 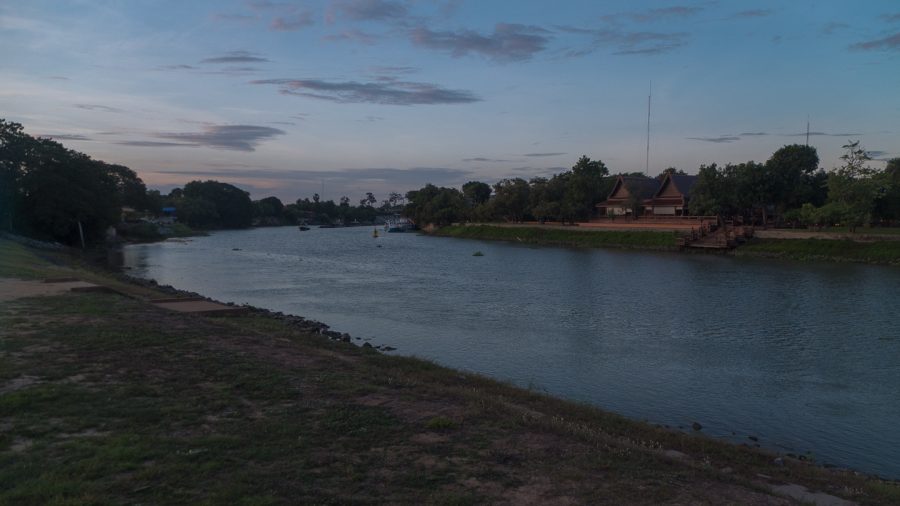 The Chao Phraya River. I think I’ve been already cycled along this one few month ago when I was travelling with Pita. Ah yes, that was when we were around in Buri. 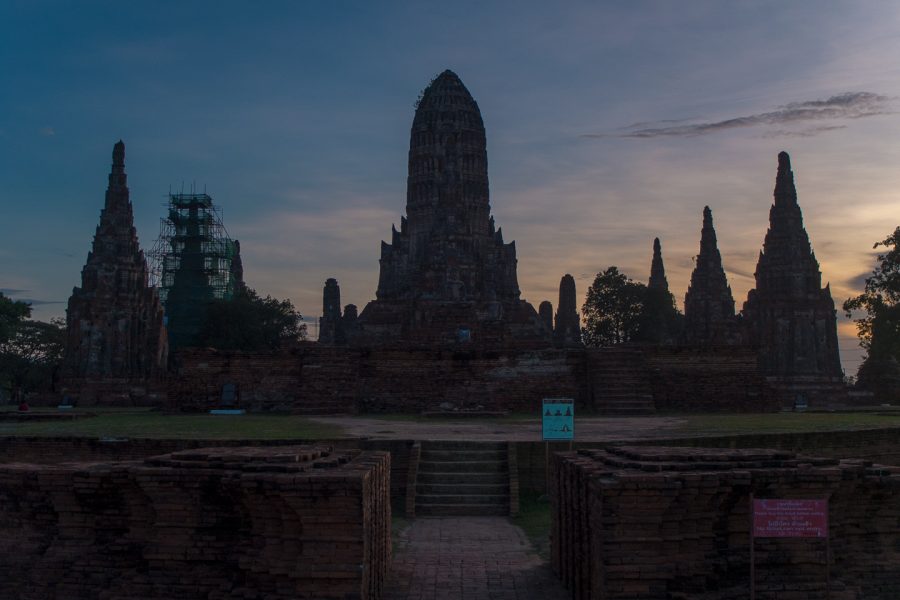 That’s a shame there is those scaffolders on the left hand side. Maybe I shouldn’t have mentioned it because now you can focus on them haha :-) Ok, forget what I said :-) 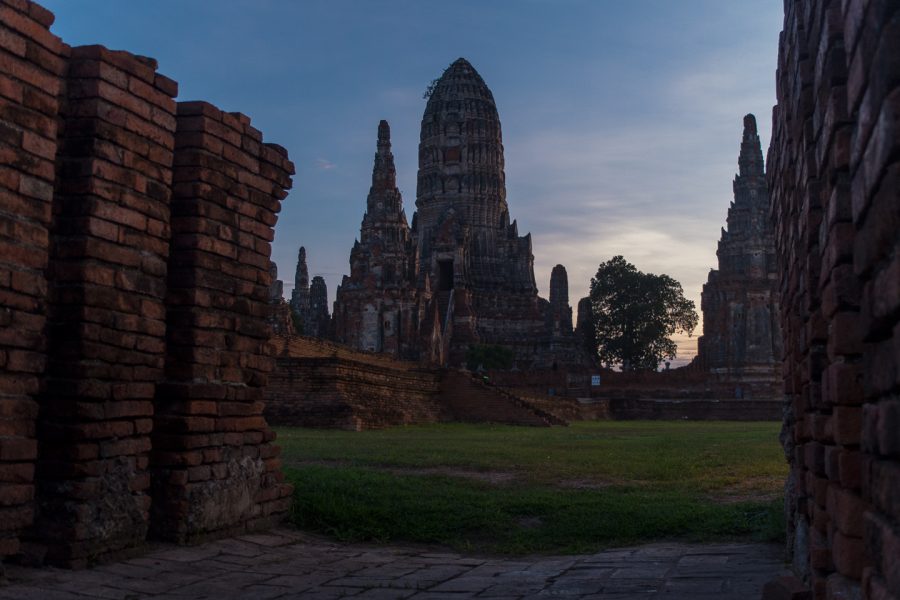 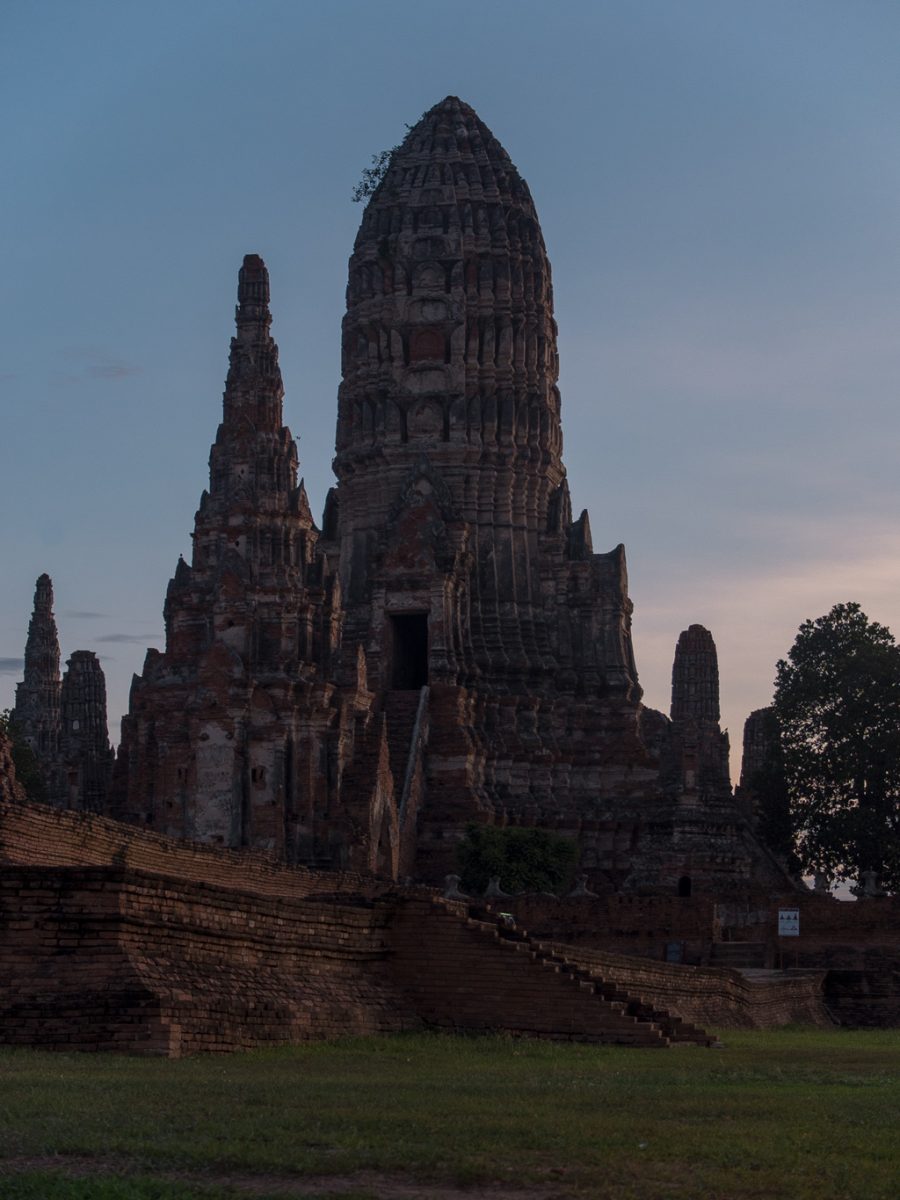 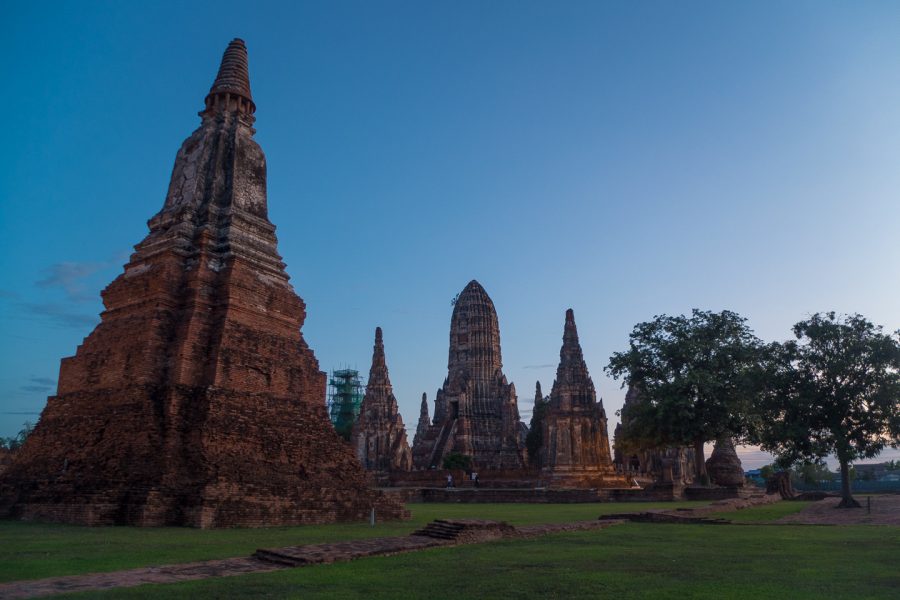 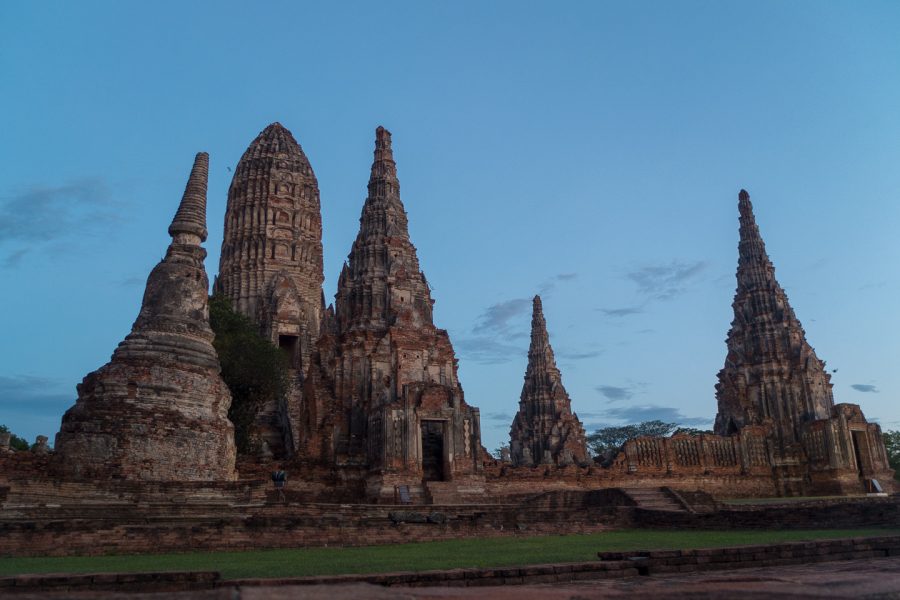 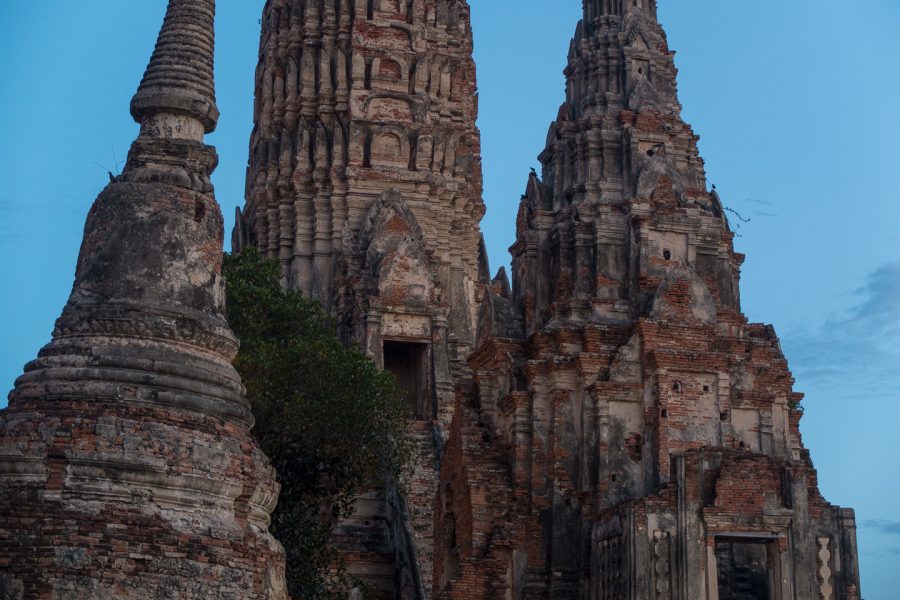 Before I came in, a guy at the entrance explained that at 7 o’clock the spot lights will turn on, so I guess it will be better. I’ve waited until then but there is still too much light at this time. I should have to wait another 30 minutes or more I guess but I need to find a campsite for tonight so let’s go. Those pictures are nice enough for me now.

So, I kept on cycling and cycling… and cycling but I could not find any nice place. I’ve stopped maybe 4 times along the way. The first one was too grassy and very close to the road. The second spot was too muddy and without enough trees. The third one was muddy again with only one tree… Finally, the fourth one was THE one! There was a perpendicular little road leaving the main one. At the entrance, there was even a sign saying “Welcome”. Thanks! :-) Just on the left side I saw a small field, not muddy for once with a shed and one tree. Under the shed there was some plantation so I could not stay there. The weather forecast said that no rain was coming tonight so I attached the hammock between the shed and the tree. Of course, my best friends (I mean the dogs :-) were around wishing me good night but none of them came close enough to receive some nice and round stones. Once I laid quietly in my bed, the night became peaceful again and I could enjoy my sleep :-)