That such a long time I wanted to take the time to collect these informations and put them together on one page. My goal is first, to share of course. But the my main purpose is to show to future Touring cyclist that there is no rule in this domain. You can be young or old, alone or with friends, Sporty or not, all you need is a bike (any kind of bike) and the motivation to do it. I’ve met people cycling with second hand bikes, others with expensive new touring bike, some other with folding bike. I’ve hear about few Kiwi guys who cycled 400km with their BMX! Choose the bike you feel right with it and starts the adventure! That list (the top one is the newest) will grow with the time so don’t hesitate to come back if you need inspiration ;-) See you soon! Dam
Note: you can click on the images if they are cropped too much. 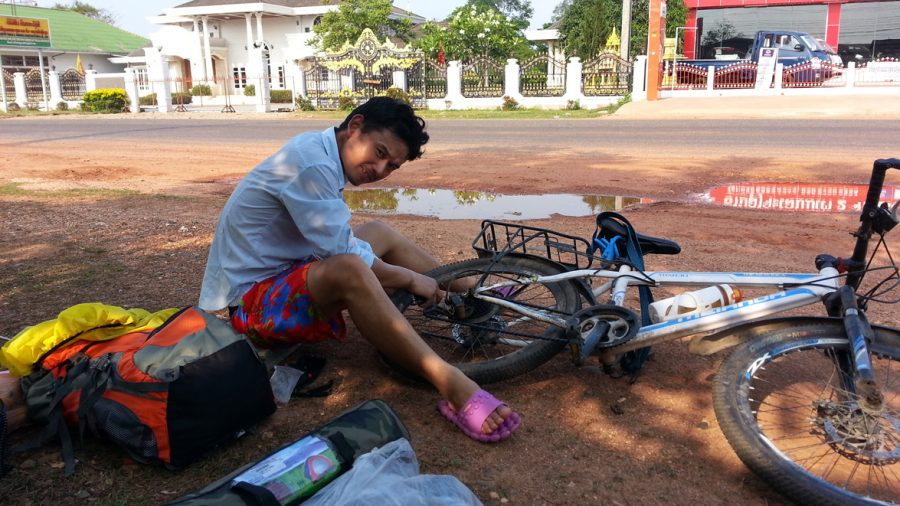 I met Bright in Laos, few days before we arrived in Vientiane the capital. He was cycling from Chengdu (China) towards Thailand. Unfortunately he realised too late that he couldn’t go to Thailand on a VOA (Visa on Arrival) so he made the decision to carry on in Cambodia, then Vietnam. 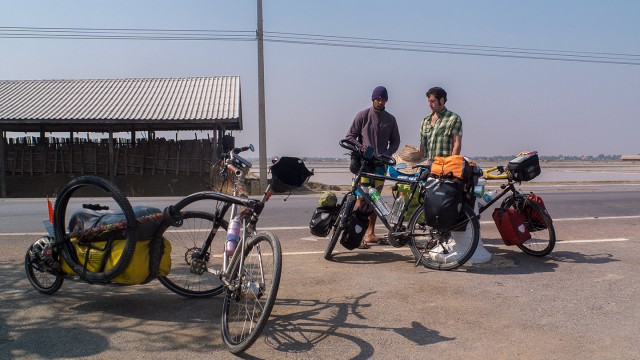 This super cold morning, we met “Lucky” Ronan (from France) who travels alone. That day the wind was pushing him to the south when we were fighting against it. Ronan travelled “the basic”. “I want to get away from electronics stuff” he said. He was using a paper map to get anywhere he decided to. Well, yes of course that’s working. 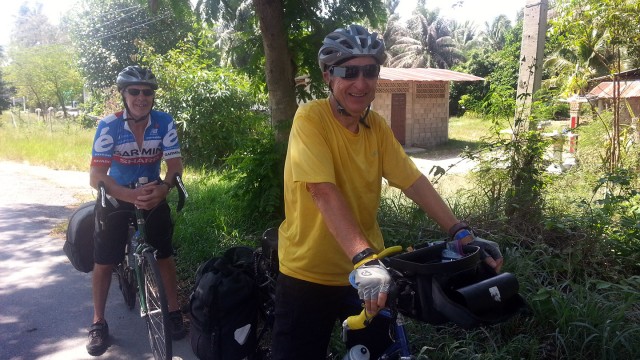 England and America met 5 years ago and since then, they organise a trip every year in Thailand. They said “we are 66 and 60 years old remember”. Yes, I can see, there is no particular age for cycling. The motivation is the only thing who works! 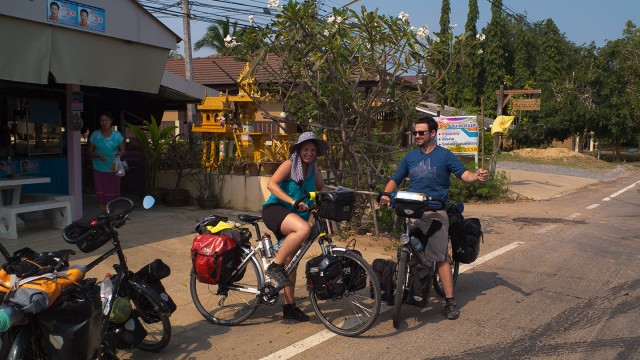 Manon and Eddie want to cycle to south Thailand following by Malaysia or Indonesia and then fly to Australia to work and save some money for the rest of their trip. Back in France they have a truck and live inside all year round. Eddie never lived in a house because his parents lived in a caravan. That’s very interesting :-) For him, cycling is just the same as his truck but smaller. Eddie did some other bicycle trip in France and South America. For Manon that’s the first time and she loves it! Good on them. 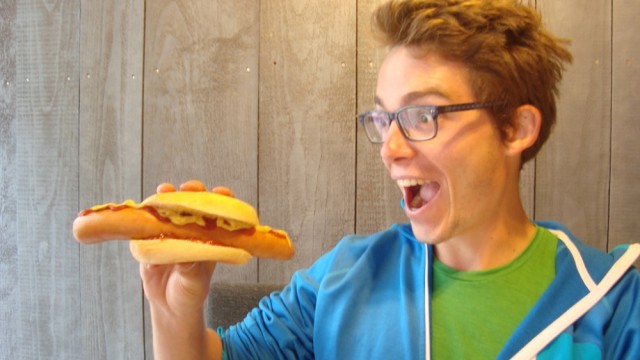 We met Clément in Krabi (Thailand). He started the adventure in September 2014 from France and wants to cycle around the world. He is one of the few in this list who has a blog and it’s written very well (in French only). You can follow his trip here. 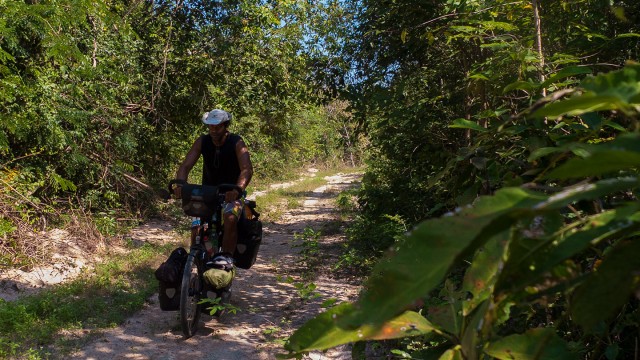 I met Stéphane in Melaka (Malaysia) as he freshly stated cycling. This trip is a dream he had since 14 years. During his twenties, he went cycling to Iceland and loved it. But since then he never had the opportunity to go back on the saddle until recently. Stéphane left everything he had behind, sold all his stuff to have enough money and realise his dream. We travelled about 3 months together from Melaka to Bangkok (Thailand). Being cyclist is one good thing and Stéphane is also a photographer. Let’s have a look to his travel blog :-) 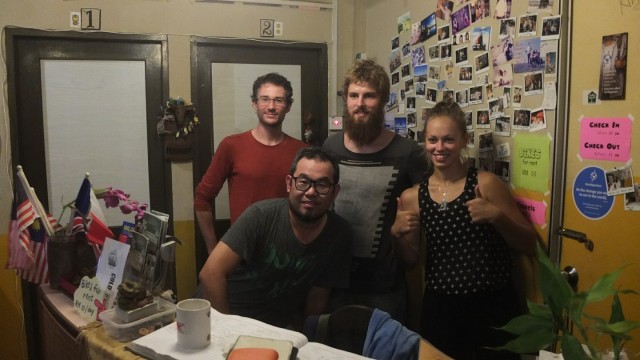 Howard (the guy with the glasses) is the owner of the Ringo’s Foyer in Melaka. He used to cycle himself. Today he welcomes any cyclist for free. The two guys on the right (They are actually 3 people) are coming from Latvia and have been cycling all the way down to Malaysia. They got their bike stolen in Poland only a month or two after they started. They had to work somewhere there to buy new bicycles. That was bad luck! They want to cycle until New Zealand and find a job there. After that, they think about splitting and continuing the adventure by themselves. 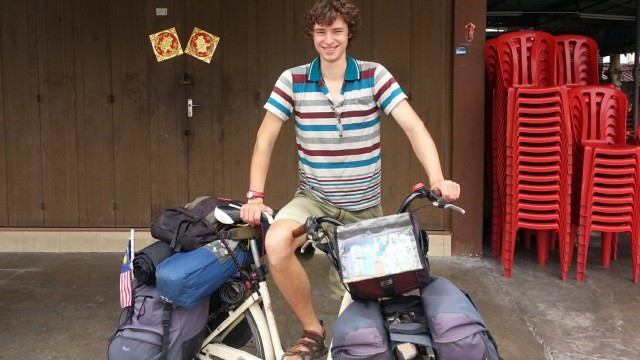 Jerome has been cycling from Belgium until Malaysia (where we met) in about 9 months. He wants to carry on until, at least, China where he will meet one of his friend with whom he will be cycling. During his trip, he has done most parts alone and some other with friends. He is carrying a lot of stuff and doesn’t necessary look for quality products. His bike is a simple Decathlon city bike that resisted all the way! (even a car rolled over on one of his wheel after he felt down). Have a good trip Jerome. 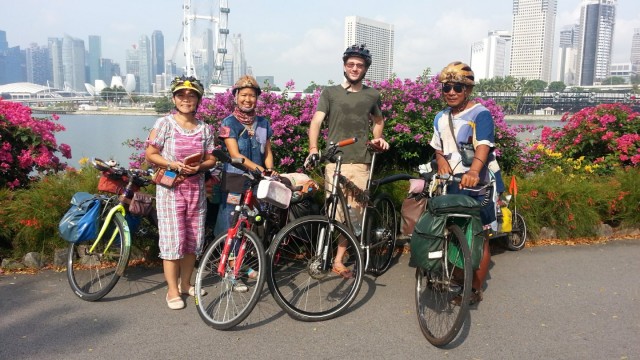 I’ve met 3 cyclists from Thailand during my stay in Singapore. On the left side, Pita, is new to bicycle touring but she wants “to become one”. She follows Kate and Grandin who are cycling together since 2012. They have been travelling mainly in Thailand, Malaysia and Singapore. We decided to travel together from Singapore until Melaka where I stopped for a while. Few months later, I met Pita again and we cycled together for another 3 weeks from Ratchaburi to Chiang Mai. 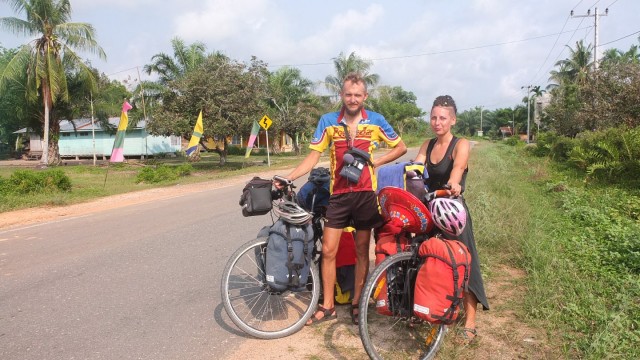 Hooo, for the first time since I was travelling through Asia I meet finally some touring cyclists. These guys are coming from Ukraine and have been cycling from home! We did not have a lot of time to talk because they have an appointment somewhere in Sumatra. They are also musicians and organised concerts during their travels to make some money obviously.

Too many cyclists (England, Australia and Finland) 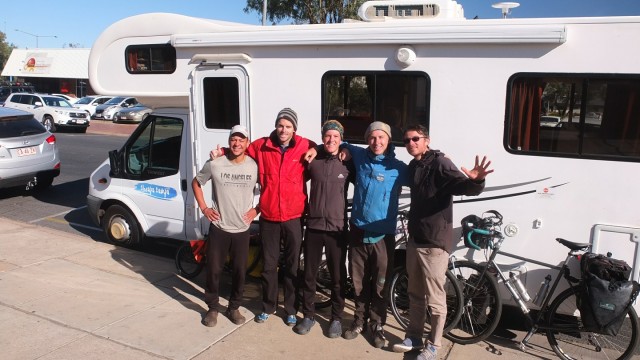 That’s in Alice Springs where I met two english guys(the ones around the red jacket guy) cycling from home. At that time, they were heading to Australia. Then David from Australia (in red) with his girlfriend from England (which is not on the picture unfortunately). They have been cycling from England too and planned to stop in Melbourne where David comes from. Finally Antti (in blue) from Finland who cycled from home and wants to go to New-Zealand. 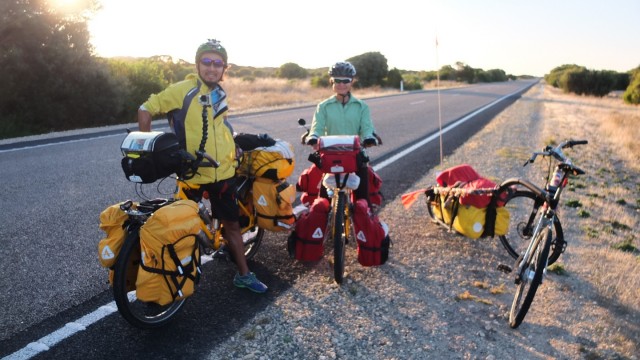 Cindy and MJ are travelling since December 2013 and started from their home, China. They entered in Australia flying from Bali and then rode Darwin to here in 2 months. They want to go to Melbourne and fly to New Zealand for another 3 months. Guys, I’m going to follow your mark on the other side :-) Here their website (which is in Chinese) if you want to have a look to their amazing adventure! 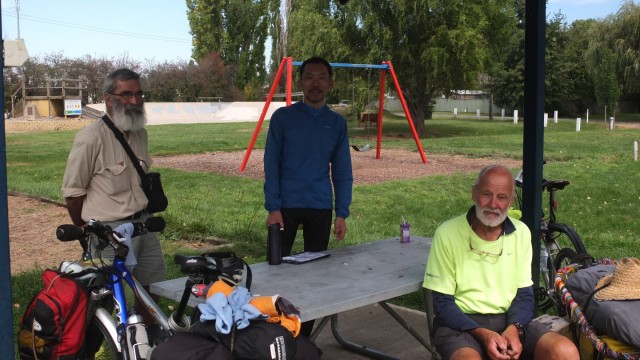 That morning, I met Alain a kiwi guy (on the left side) and Jean an Ozzi guy (on the right side) who were cycling together during a 3 weeks trip. They are respectively 70 and 66 years old and they did not choose the easiest roads at all. They cycled across the forest in the mountains. Very good on them!
5 minutes after we met, another cyclist joined the group. He name is Akihiko, from Japan. He was doing a 4 days ride for charity except that the charity was cancelled. That did not stop him. I even follow him onto the summit of Australia :-) 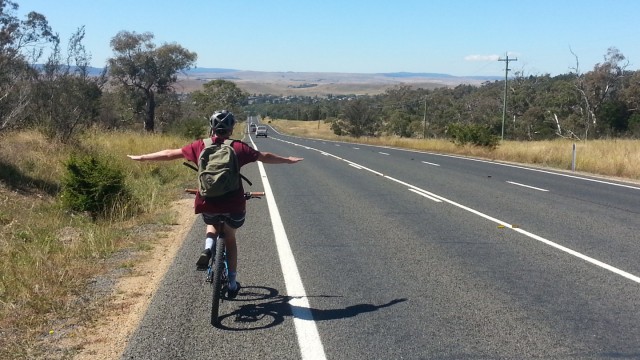 Tim, a young an clever young man I met in Cooma is gonna be a perfect cyclist later on. Actually, he is already one. He does mountain biking and competitions. When I met him, he plan to cycle from his hometown and reach the sea to visit another part of his family. That’s about 250km! You are tough man :-) 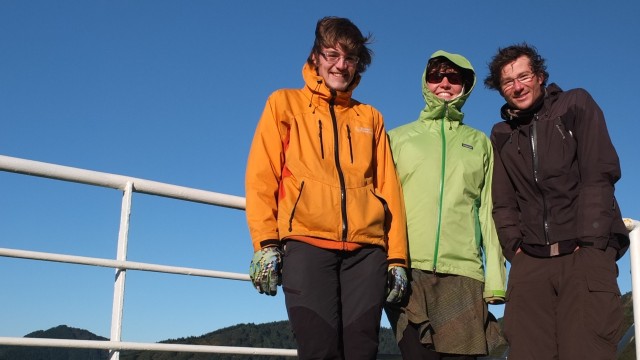 Cyril and Valérie are brother and sister. They come from Switzerland (the french speaking part). They both use a trailer, the Bob Abex which looks pretty good. Unfortunately a big problem with his knee and was forced to stop cycling. When I met them that day, they were on their way back to the airport and would fly home soon. Cyril was very disappointed about this but he couldn’t do better. 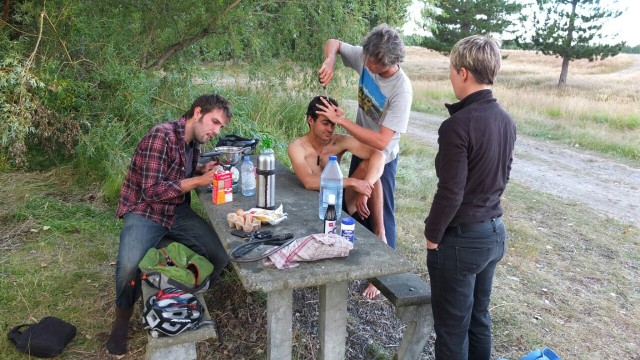 Only few days after I left Josiane, I met four Frenchs guys. Charlotte, Matthieu (the improvised hair dresser ;-), David (red shirt) and Leo (the victim). We didn’t meet all the same day but in a very short period of time. Charlotte and Matthieu are from Brittany, David from Jura, and Leo from Hautes Alpes. We spent something like 2 months together as we stopped at the same place to work for about 5 weeks. 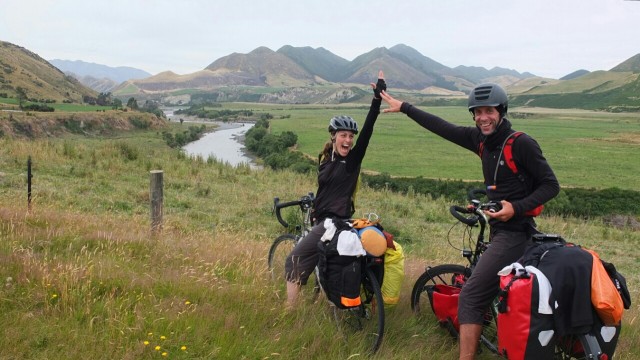 Few days before we arrived in Christchurch with Josianne, we met Sebastien from France. We was on a trip for 3 months (if I remember well). We cycled half a day together because Sébastien was cycling north towards the east coast (where I haven’t been finally) and we kept on going towards Christchurch. 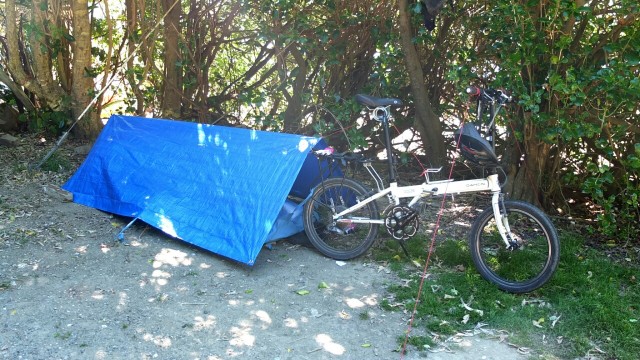 I don’t know her name unfortunately. She is 50 years old, from Canada (Chinese type) and she cycled in NZ for 9 months on this bike, a folding bike! Her set up is the lightest I’ve seen since. She has only one waterproof bag at the back of her bike. Her campsite is very minimal but she enjoys a lot and she is a very friendly person. I wish I dared to take a picture… Very interesting. 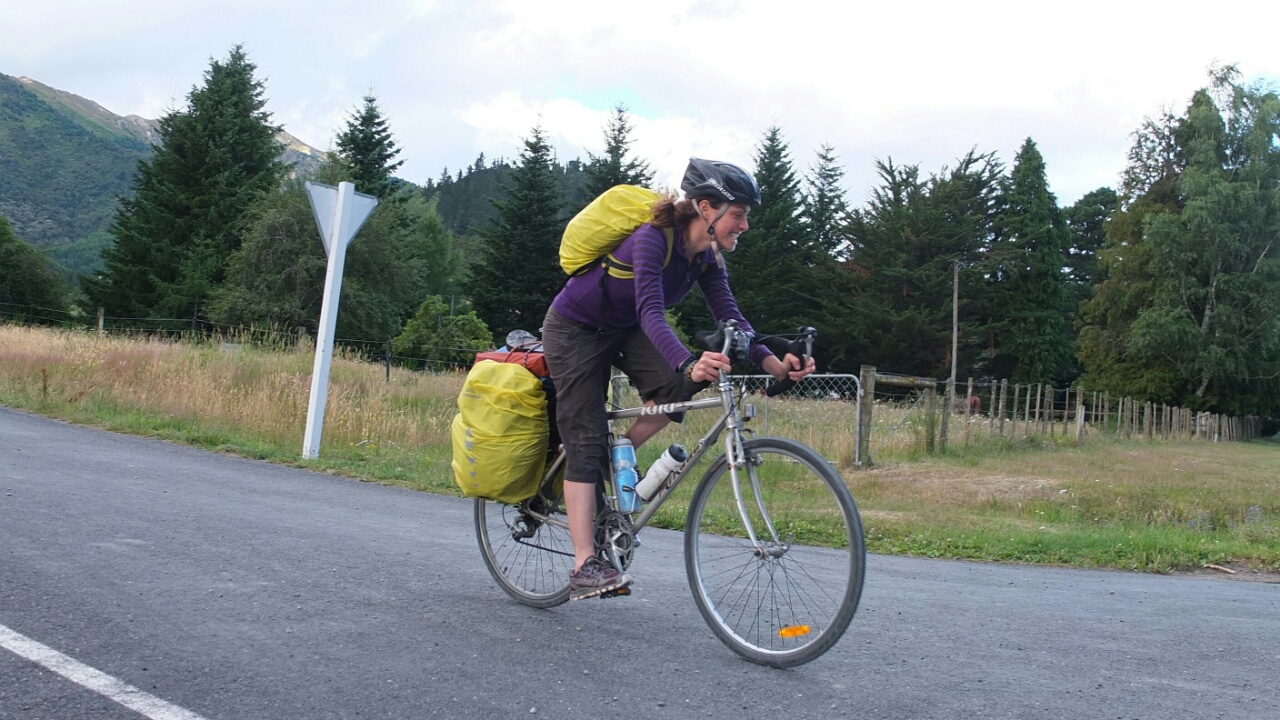 Josiane is from Canada, Quebec. I met her right after getting out of the ferry from Wellington to Penang. At that time she was cycling alone and we were going approximately to the same direction. I expected to cycle on the east coast but she wanted to visit the center. I thought, why not! We finally travelled together for 2 weeks until we reached Christchurch. At that point she was going to visit her friend and I decided to visit Akaroa, the peninsula on the eastern side of the city. 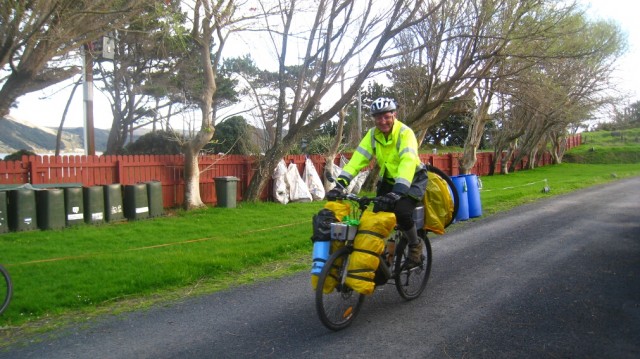 I first met Karl (from NZ) one day or two after Cap reinga. He was on his way towards it. He said he was an old guy and wasn’t doing much kilometres everyday but he enjoyed it a lot. A long time ago, he has cycled around NZ clockwise. Now he decided to do it the other way. One late afternoon, when I was resting not far from the road Karl rushed to me with his big smile :-) He caught me up! I’m not necessarily fast when I’m travelling but for an old guy (as he said) he is quick! Good on him :-) 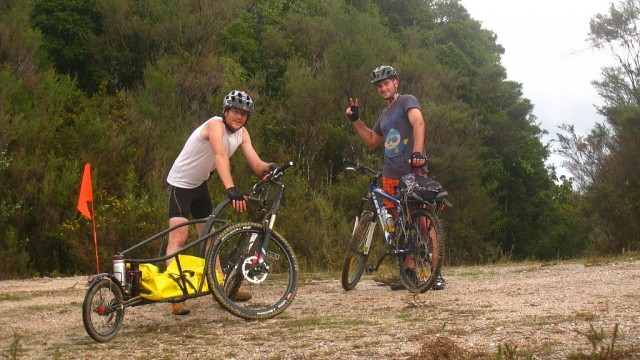 Peter is from Czech Republic. I met him in KeriKeri (New Zealand) where I stopped to work for the first time. He didn’t come to New Zealand with a bicycle but simply decided that on the way. One day, he hitchhiked back to Auckland after he bought a second hand bicycle from internet (gumtree). Then he cycled back to KeriKeri with nearly no gear! Once we finished working we did part of the road together until Cap Reinga. 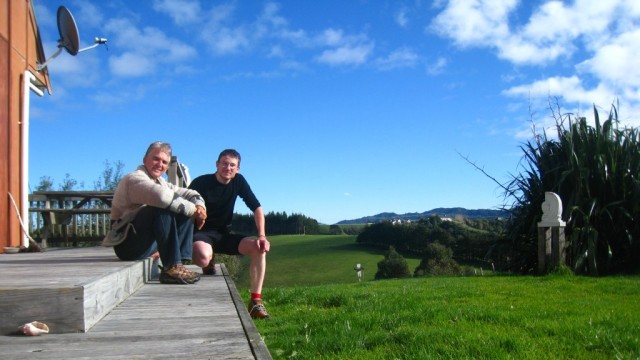 Yan, a Kiwi guy, is the first person I met in New Zealand and the first touring cyclist too! When I met him, he was on his motorbike. First, he overtaken me (easy) and stopped few metres further. He told me he just came back from a trip in Thailand, Laos and Cambodia and would be happy to host me for one night. When Yan is not cycling in Europe or NZ, he is also a Yoga teacher and get on his bicycle when he can. That was a good push to start my trip :-) Thanks!