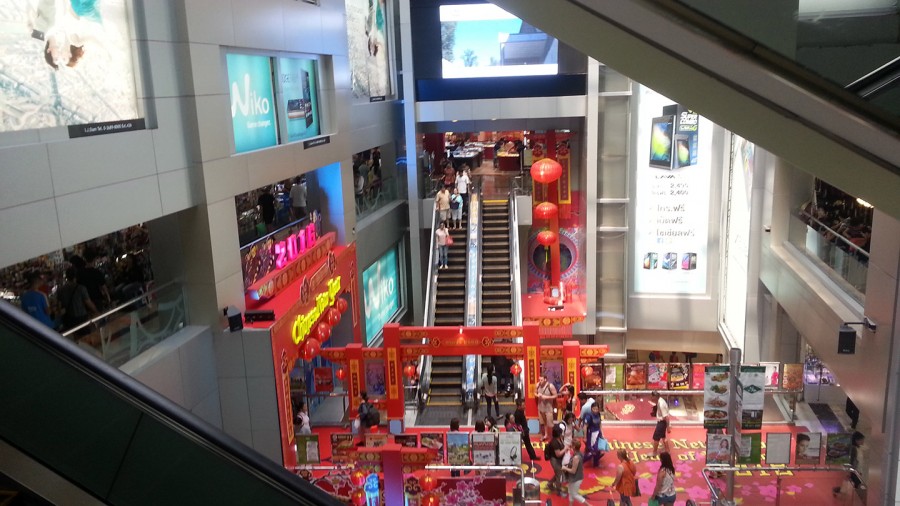 Let’s resume Bangkok in one post. I’m not particularly attracted by these megapols at all. I’ve done all I had to do here and certainly too much shopping malls. I’ve been to the embassy, cycled around the city to reach the different places, try to sleep in the cheapest backpackers I could because I stayed only one night at Pita’s mom “boombed” place and saw Stéphane few more times before we take different directions across Asia. That’s all! 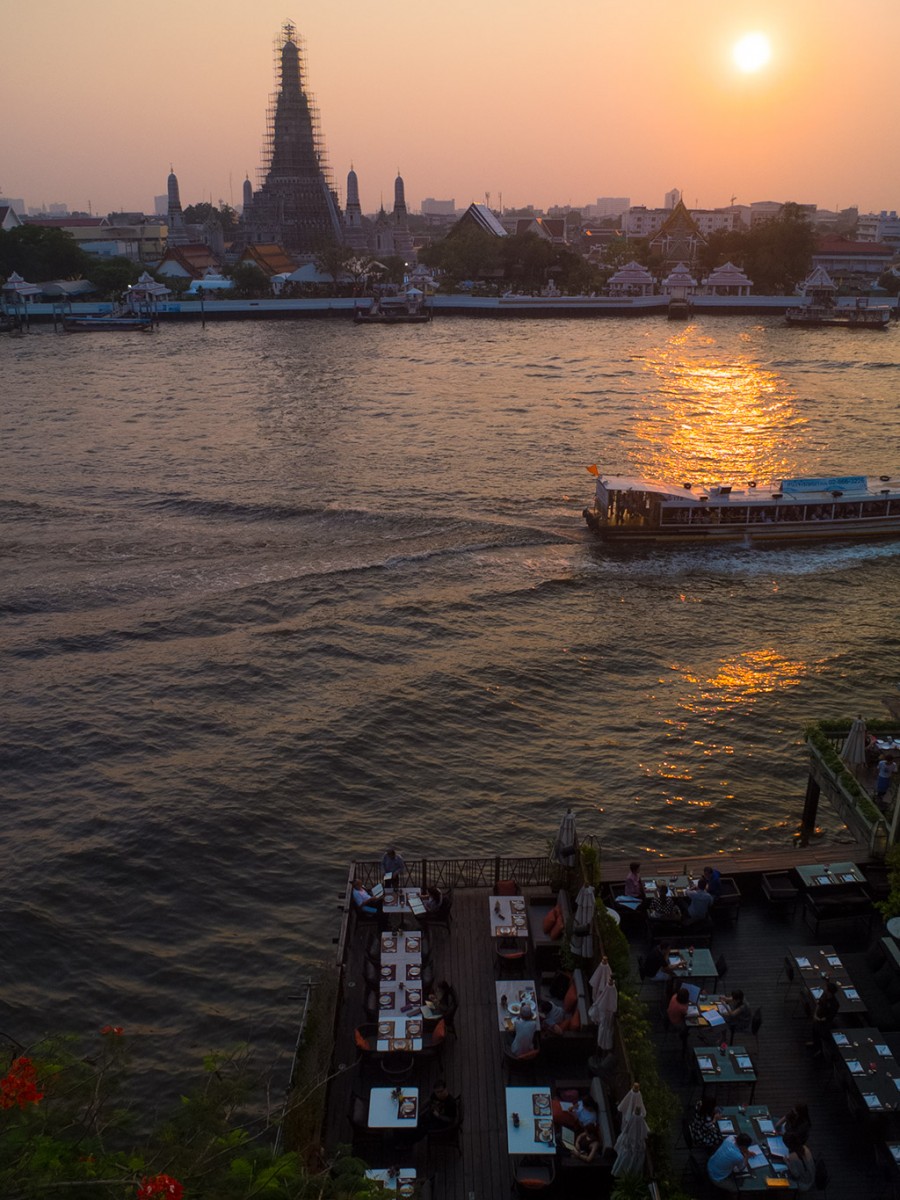 The same day when I arrived in Bangkok I joined Stéphane around a spot he wanted to photograph. We looked around for a while until we discovered a rooftop terrace with a nice view upon the temple Wat Arun. Unfortunately it’s completely surrounded by scaffolding now. 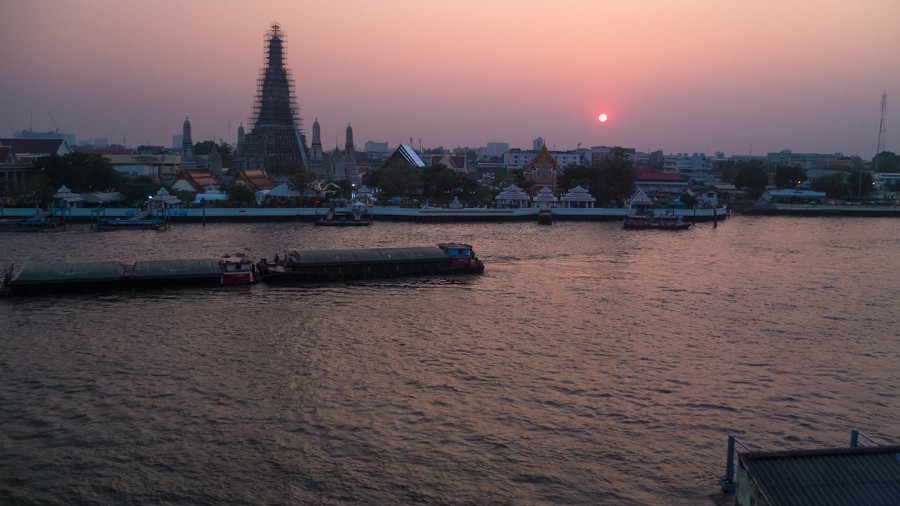 A friend of Stéphane who came here many times told him that, during one previous special day, they dismounted all the scaffolding for the event and then reassembled everything the next day! haha! Crazy! 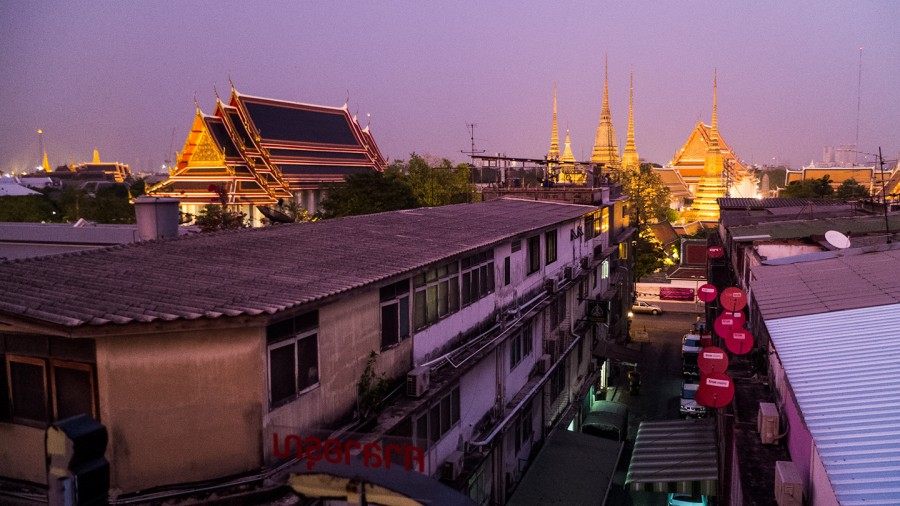 That’s the view at the back of this rooftop bar. There is few other temples too :-) 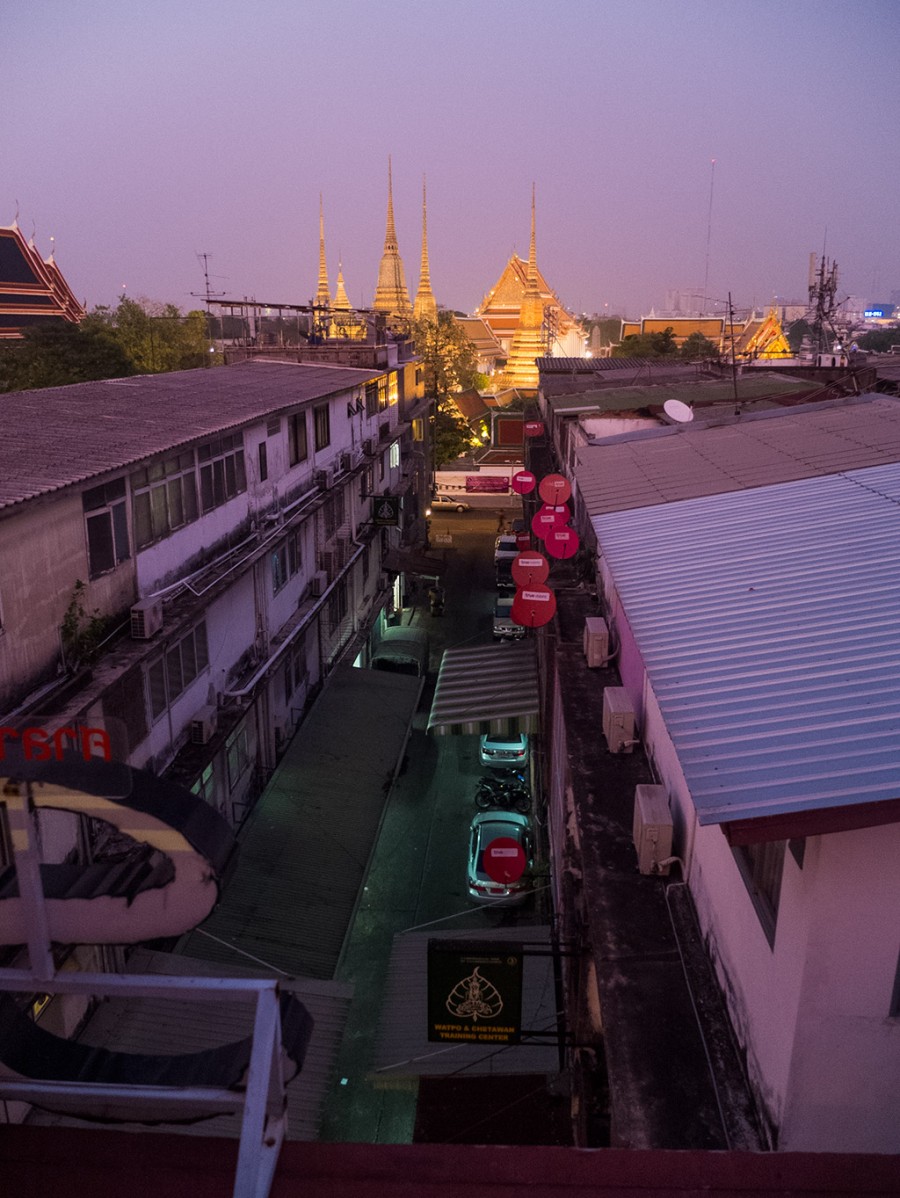 Portrait one onto the street. 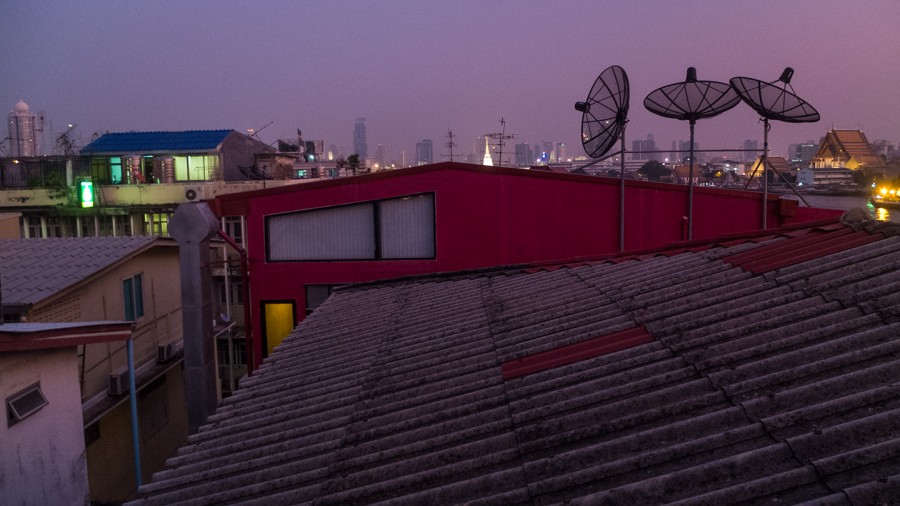 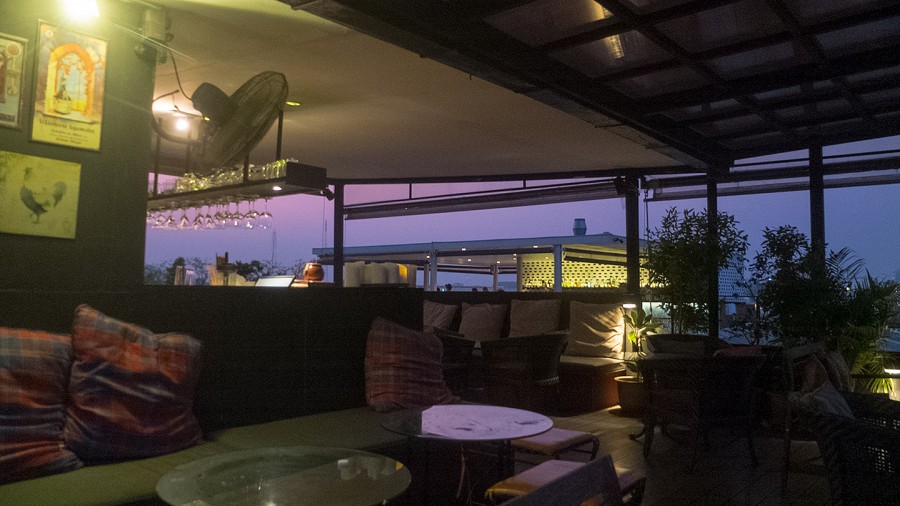 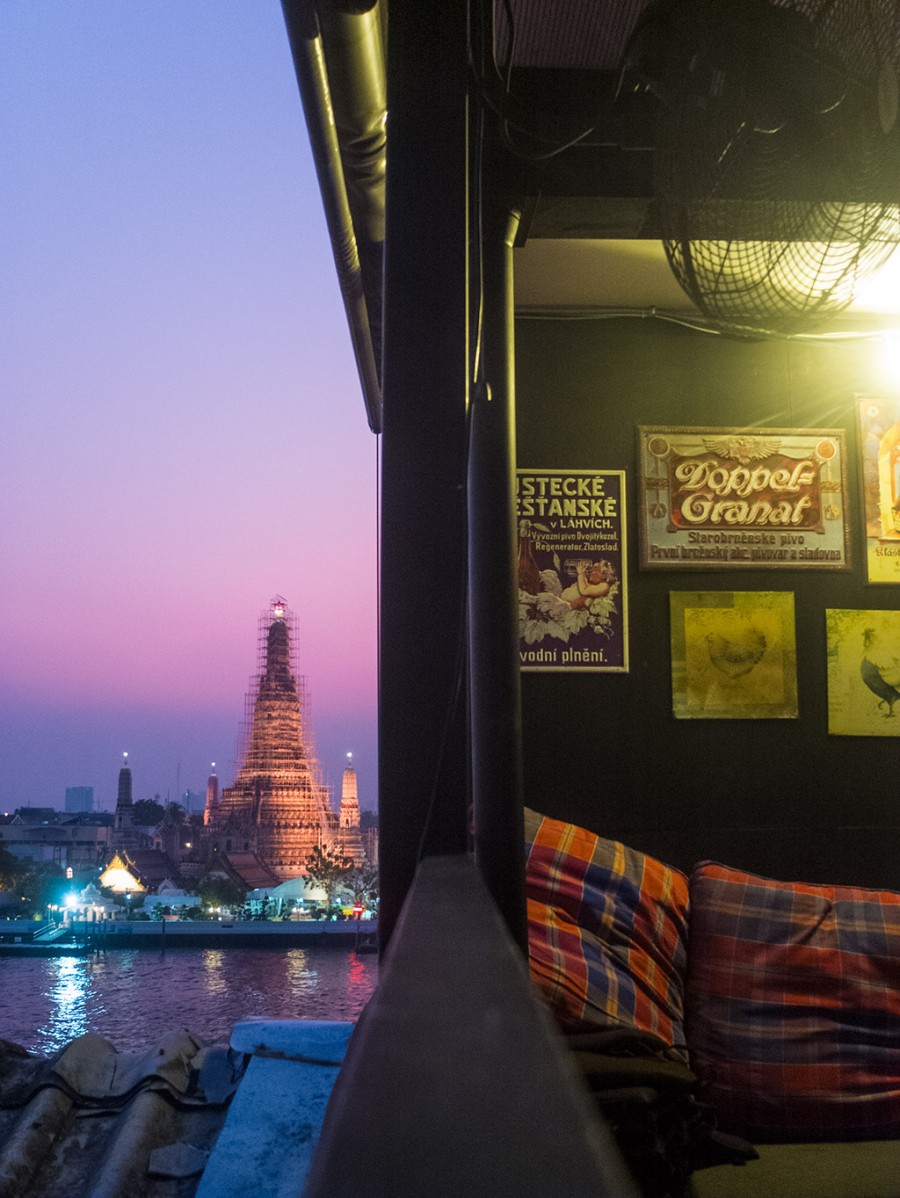 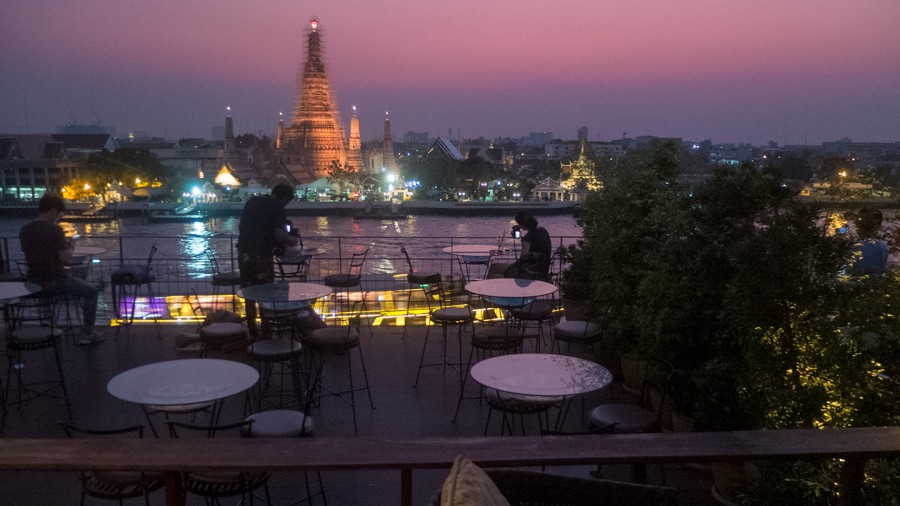 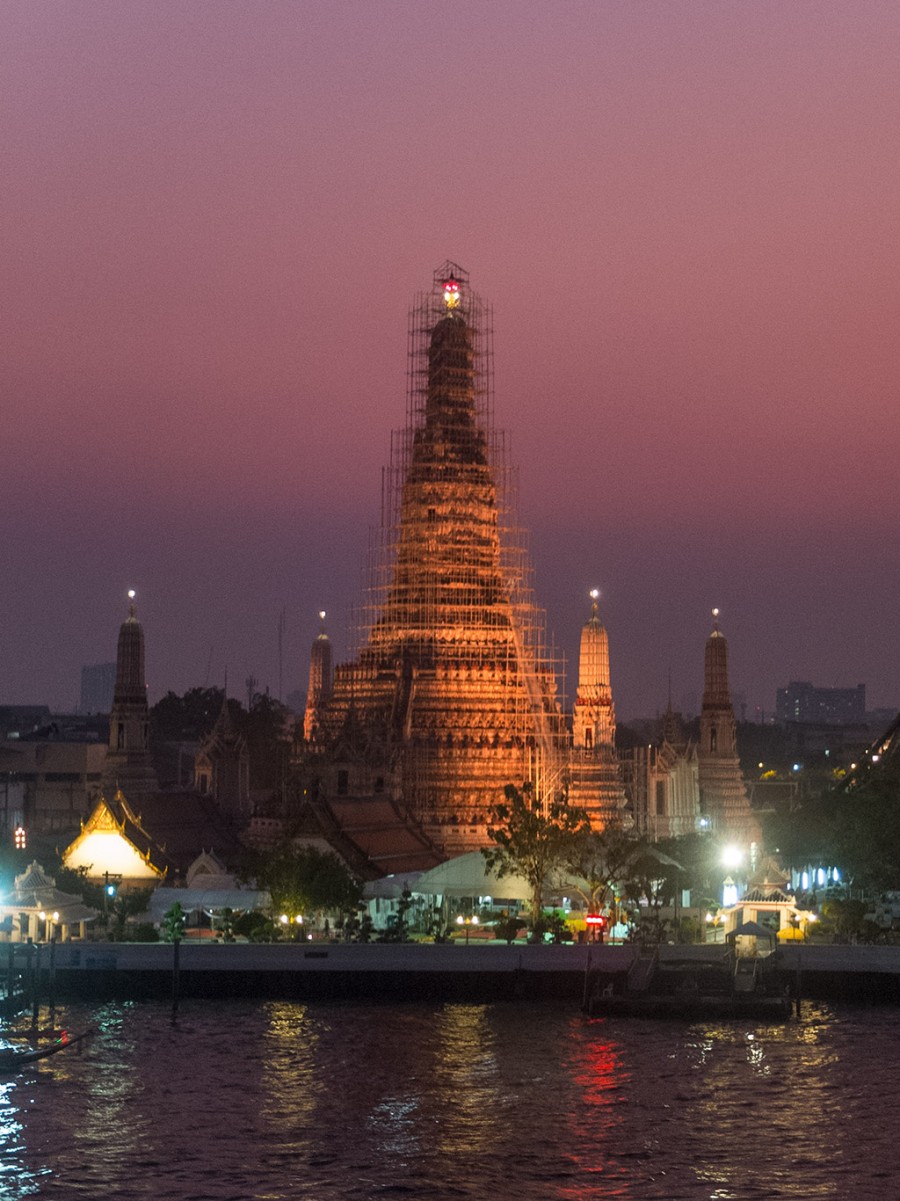 It would be sush a better picture without this structure around it. 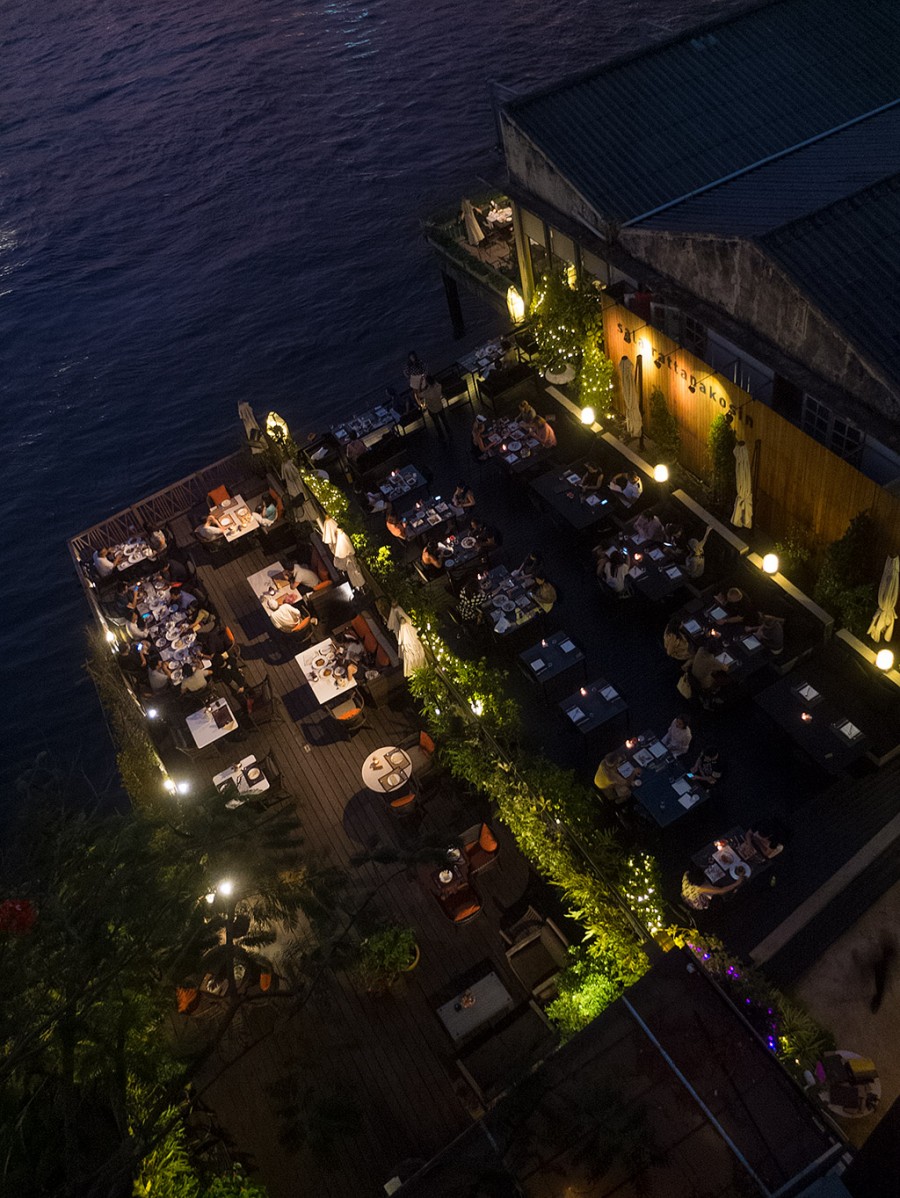 First we’ve tried to sit on these terraces down there but as soon as Stéphane asked if he could use his tripod they refused. 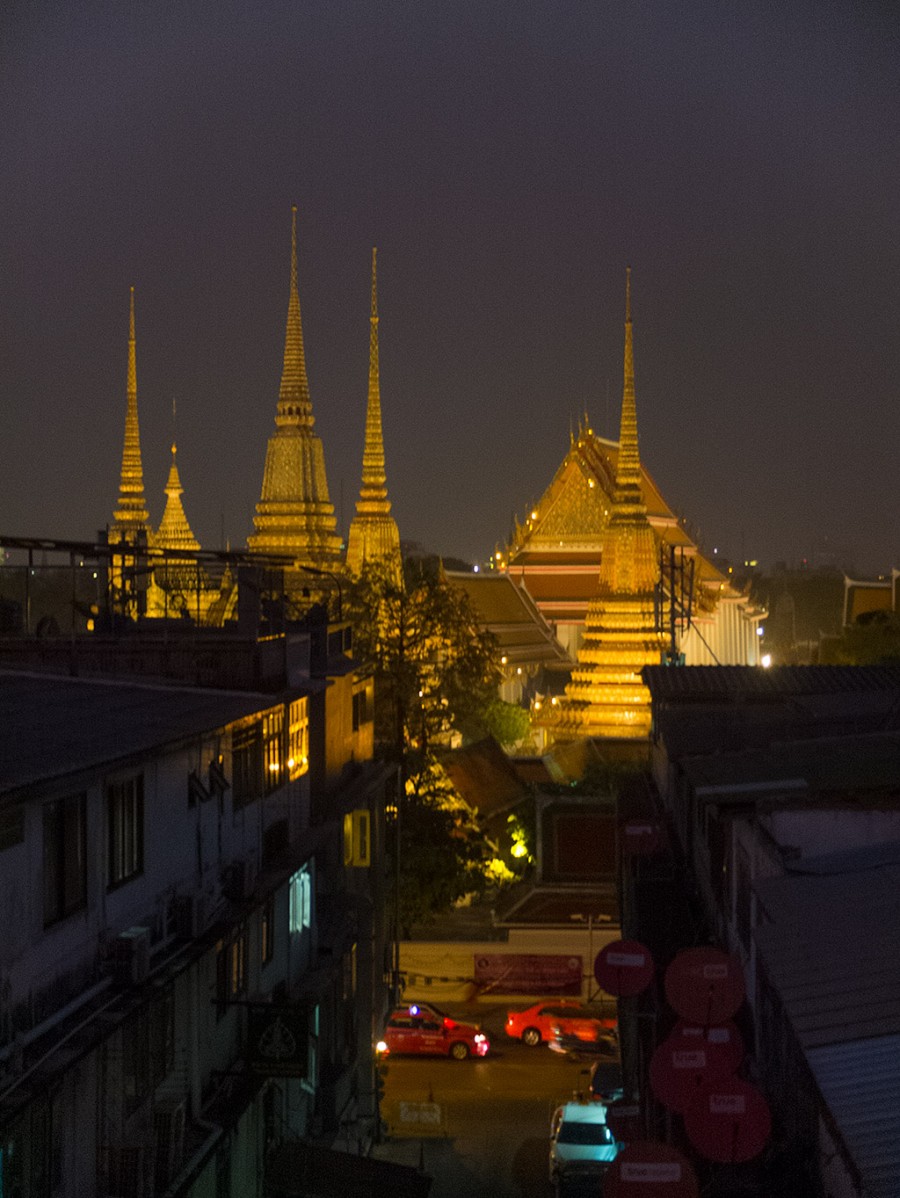 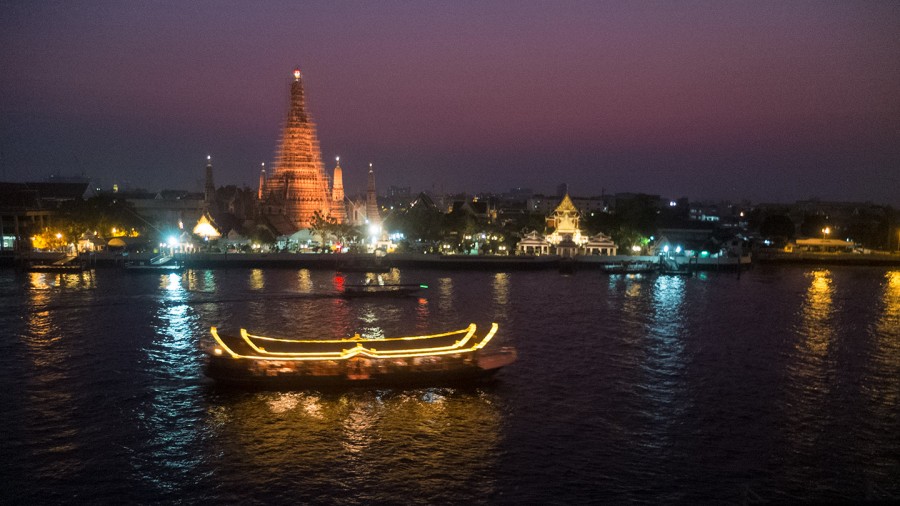 Houuu! That’s a nice touristy boat this one! 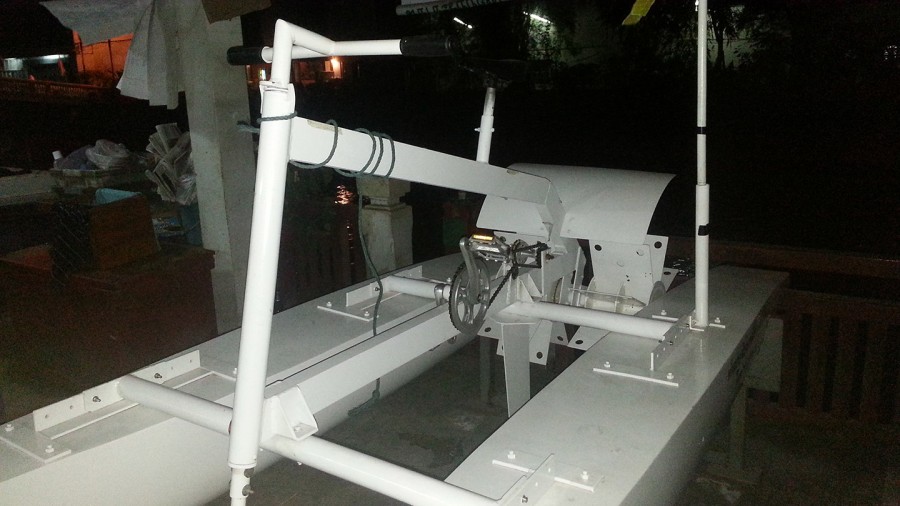 Few days later, we were walking around and discovered that nice “pedalo bike”. Here we are! We just need to find the way to attach waterproof bags into that and we could literally cycle on water! 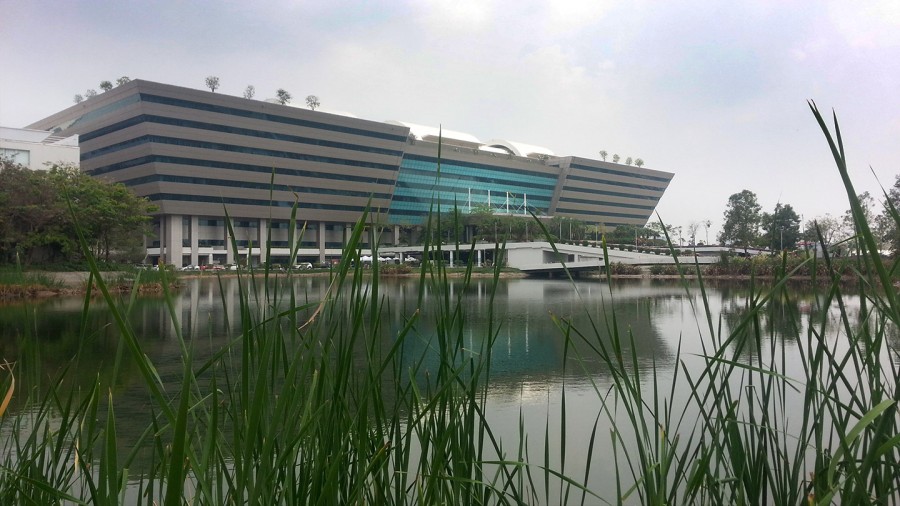 That’s the embassy where I got one month visa extension. Everything is quite well organised here. All I needed was:

I arrived around 9:30, a bit late. During I was waiting for my visa and passport to be back, 12 o’clock rang. Actually they do a break between 12 and 13pm. Everybody must leave the room during one hour ” for security reasons” (I like that). I was lucky because when I got to the office to ask if my visa was ready they could give it to me just before the break. Few! No more waiting! I’ve got another month in Thailand :-) 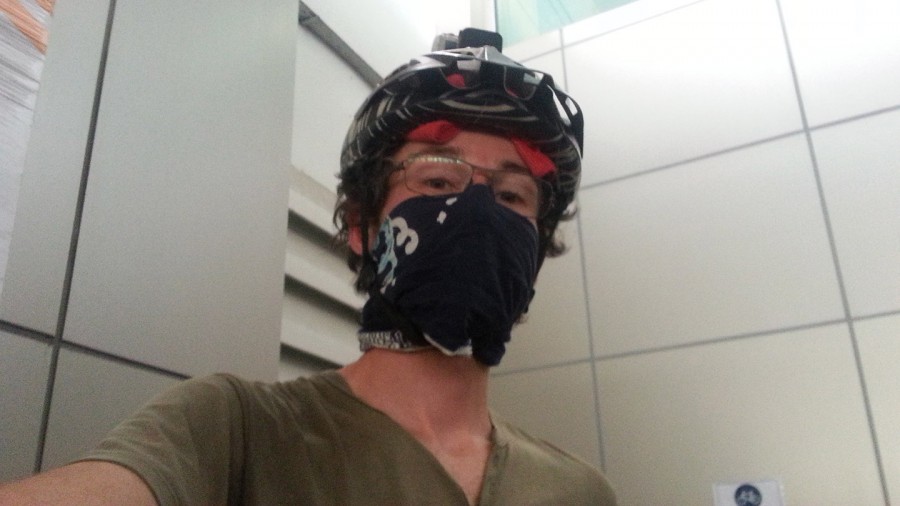 Now, ready to ride to Kate’s friend’s place. Kate arranged for me another accomodation but her friend lives 25km from the city centre. Unfortunately, when I got there after more than an hour cycling (with my painful 7kg backpack) Dong, her friend, texted me that he would be back in 4 hours. I’ve got some other things to do today so I ate something around and kept cycling back to the city centre. 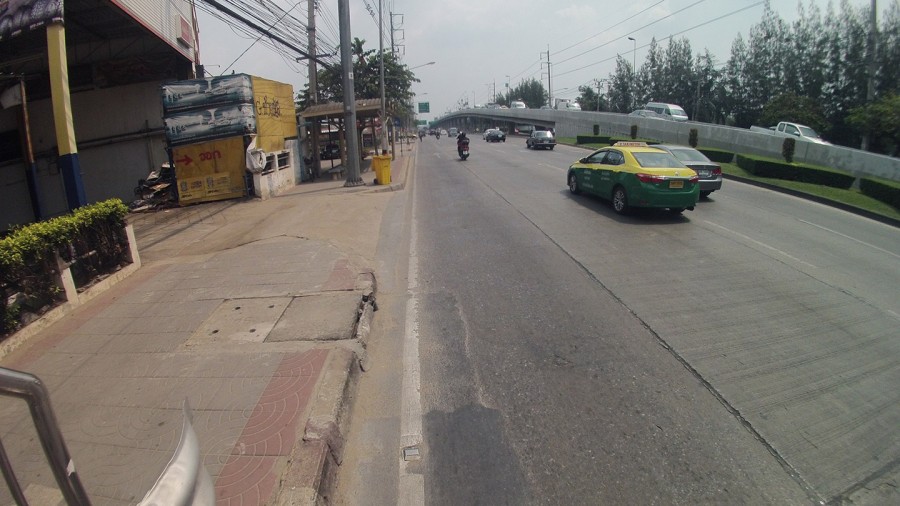 Once there, I will book a backpacker so I won’t have to spend too much time riding with my bothering backpack.

How is riding in Bangkok? Something doable if you are careful enough. 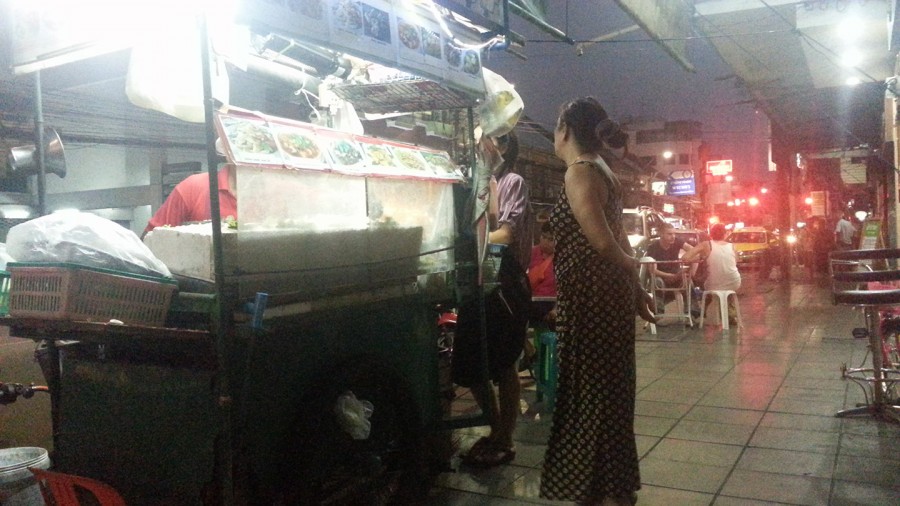 I tried to eat cheap food everyday but it’s not always easy. Once, I stopped to have some “street food”. I was sure this would be cheap until I realised I paid 20 baht more than a local woman. When she heard the price, she said something to the shop owner. I could guess that she was surprised of the price. The shop owner answered her. The only word I understood was ” Falang” which means “stranger”. Basically I’m pretty sure she told here ” for stranger it’s more expensive”. So I paid 60 when the other client paid 40 baht. Of course that’s still cheap but why should I have to pay more?! Is it my fault if I’m coming from another, richer country?!

I will remember you! If one day you come to France. IF I have a restaurant. IF you are in holidays and come to my place, you will pay this higher price and will get that nice feeling of being ripped off! That’s lots of “if” obviously…

During the rest of my visit in Bangkok, I came back several times to the MBK shopping mall and other around. The second day I bought a magnet USB cable that has the same kind of connection as Apple computers. Quite a good idea I thought but maybe too fancy? The packaging seemed to be good quality so I gave it a try. I had to come back two days later because the cable worked sometimes only. They said:

This went on for 20 minutes maybe. I’ve explained that the cable would work only sometimes, that the last night it should have charged my mobile but it didn’t. They tried the cable and saw it was working (of course here it works…). ” You must push hard, you see?” The guy tells me. “No, I bought this magnet cable because THERE IS A MAGNET. So I don’t have to push like you say”. I’ve tried myself many times too and reproduced more than once the problem front of their blind eyes. They kept refusing to refund me. I even offered to get only 50% back and insist several times until, very sadly, like it was the end of the world, they refunded 50% of the faulty product which I left behind, of course, to show them I was honest. “You can use it yourself because it’s working as you keep saying”.

Bloody sellers here! They count on unexperienced tourists who won’t be able to come back to sell them shitty products, because it’s what it is. I’m pretty sure these malls sell more than 50% of low quality stuff to tourists who think “wow that’s so cheap in Thailand”. Well, you get what you pay for… I had a doubt on this fancy cable and I should avoid the trouble by buying something more classic. 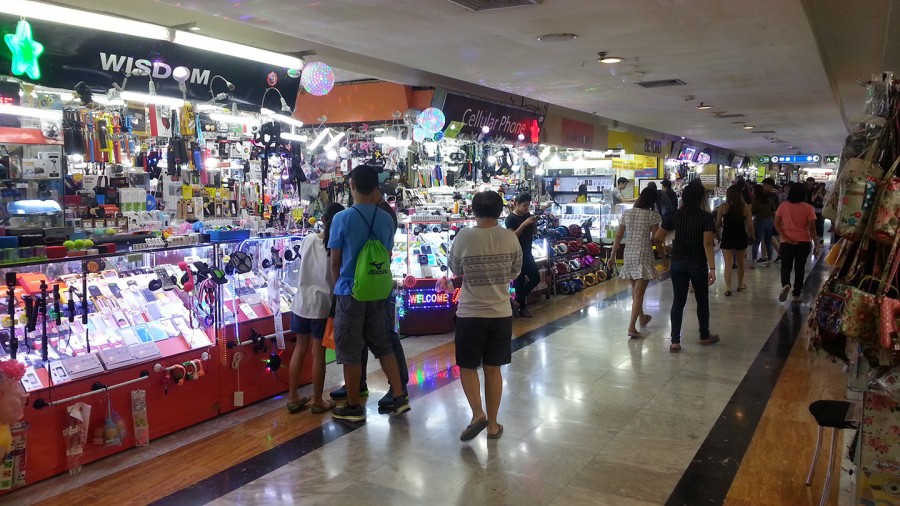 With the 150 baht that shop refunded I went to another one and bought a simple branded USB cable (Remax flat cable), the same model that the one I own already. I know this one works.

My tip would be: buy only stuff that has a security lock on it. It could mean that the quality is better but nothing is sure…

I don’t like touristy places and this kind of experiences don’t help at all! I’m angry!