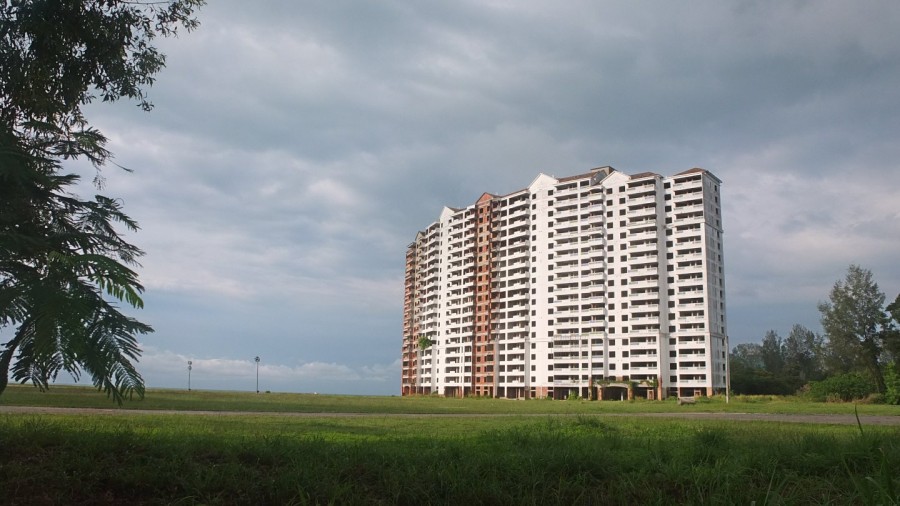 Second day on our way to Kuala Lumpur. We’ve started really early this morning to make sure we would avoid most of the heat. The first part of the day was hot and a bit hilly and the second part was rainy and more hilly ;-) Lucky us, as we were searching a place where to camp, we met Amir, Sabariah and their family with who we had a great time. 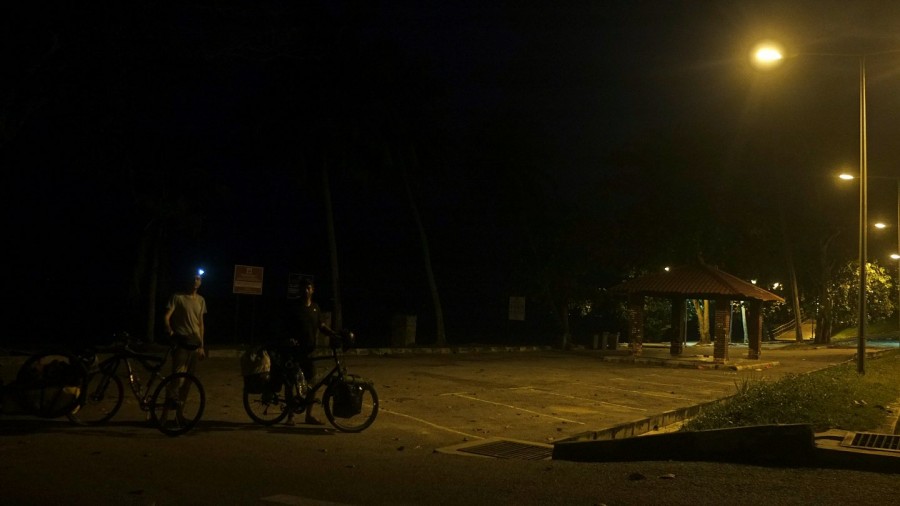 As I said previously, we woke up before sunrise this morning. The night was ok, it did not rain at all finally but it was pretty hot. Stephane was sweating in his tent when I was ok in my hammock. Looks like I’ve done the good choice by trying this new set up. There was plenty of strikes last evening and a bit a wind but nothing got worse.

We are ready to go! 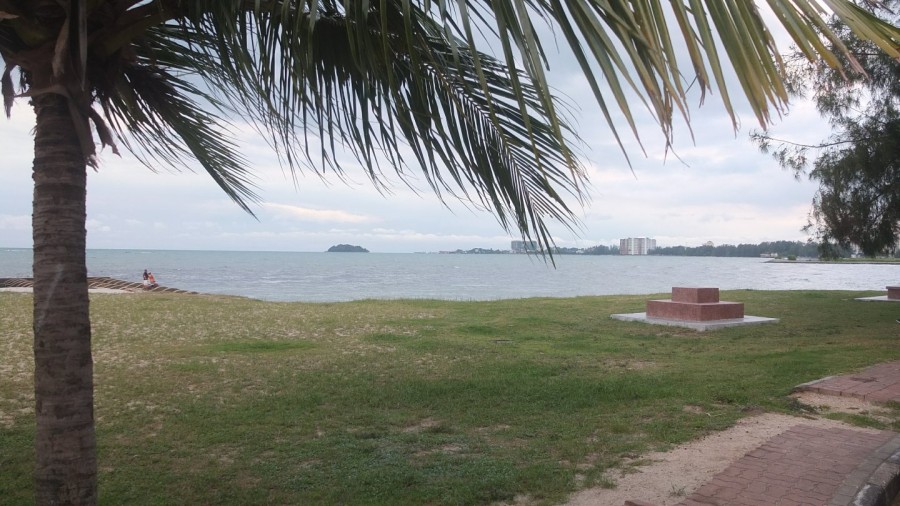 Few hours later and after breakfast, we are now cycling along the coast. The sky is covered so it’s not too hot. 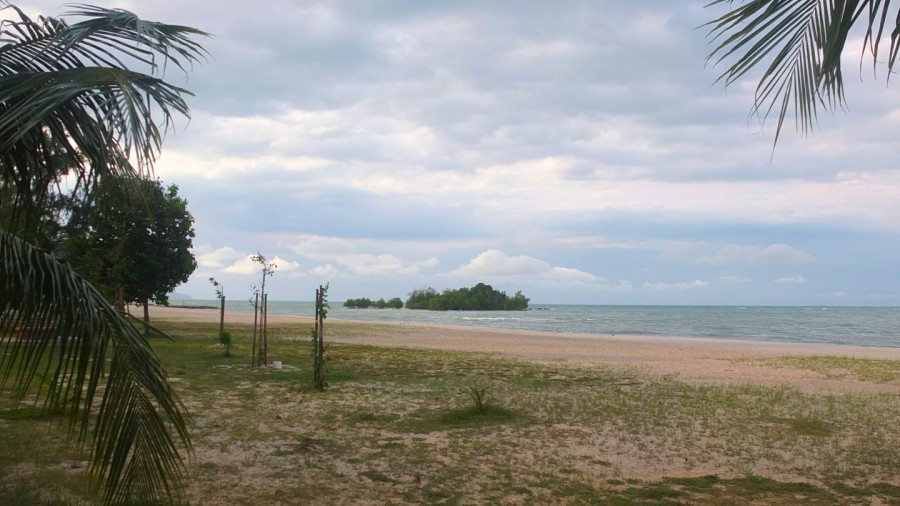 That’s not too bad here. Malaysians don’t seem to like water. Or maybe the pollution doesn’t allowed them to swim. 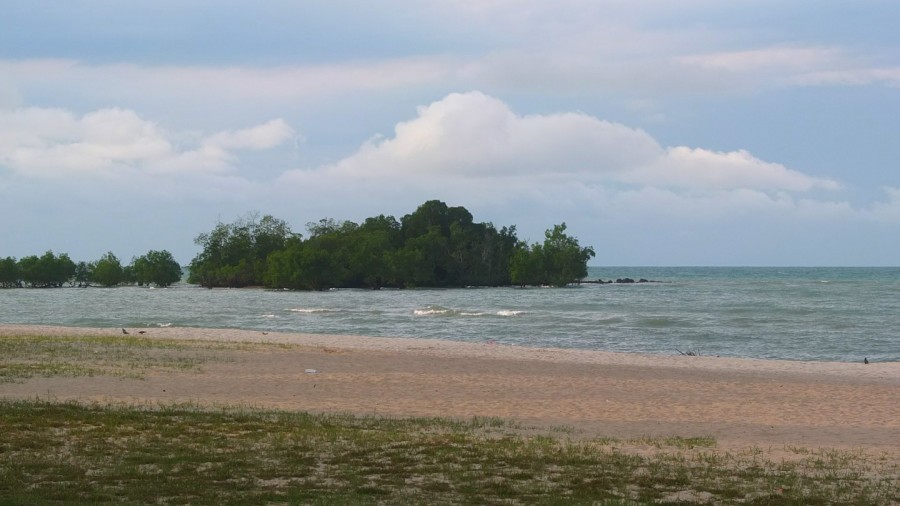 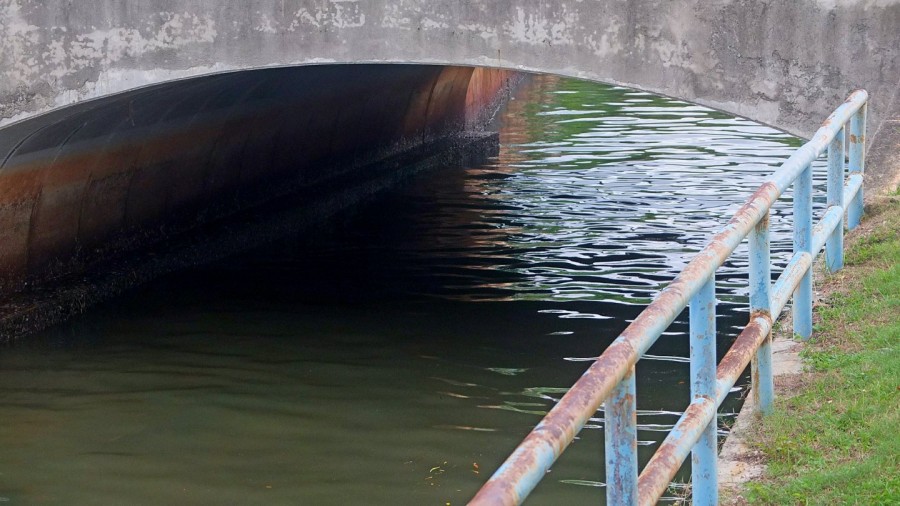 That’s the river which goes in the sea. In Malaysia, most of them have this colour. I’ve never seen clear water yet. It must be better in the mountains, I hope!

Along the way, we can see lots of inhabited and abandoned buildings. This one is huge! 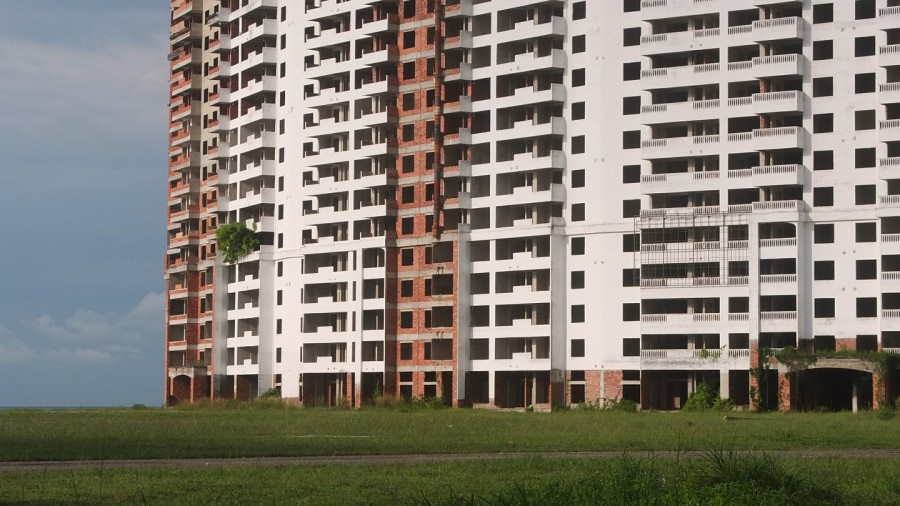 For sure, no one live here now, a part some homeless people maybe. Looks like they did not even finish the building. The works were stopped on the way. 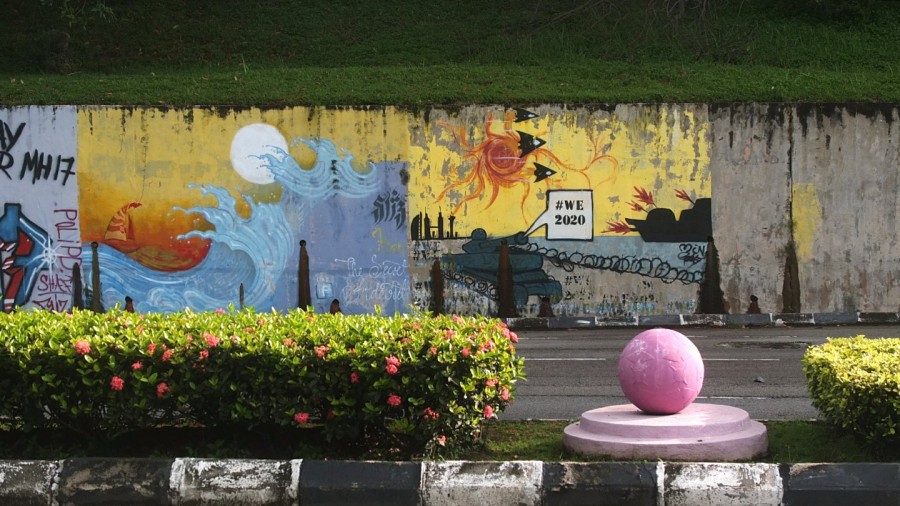 The graff on the right hand side shows thoughts of certain people in the country. This is far to be a “pink” future. Is Malaysia heading to war? against who? and why? At least, we have a date… 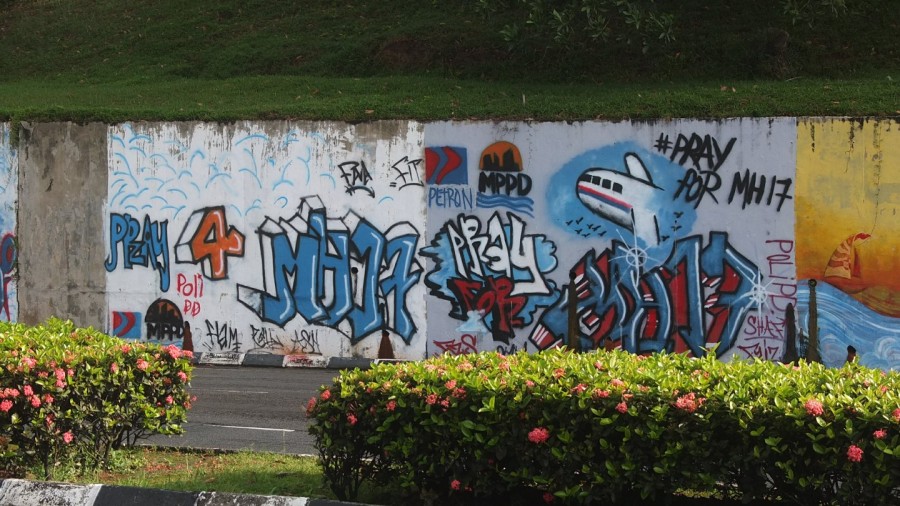 Some other graffs are more focused on the tragedy about the plane crash that happened months ago now. 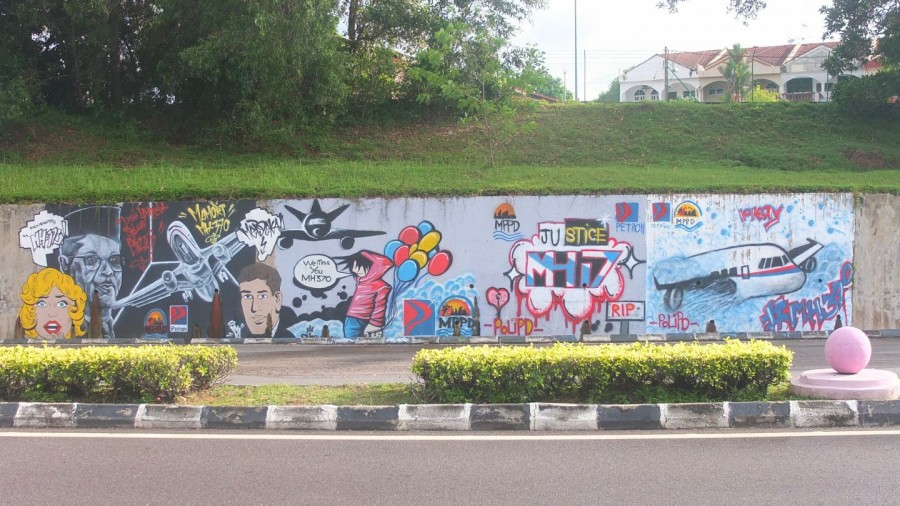 It must have hurt more people than ever for sure. 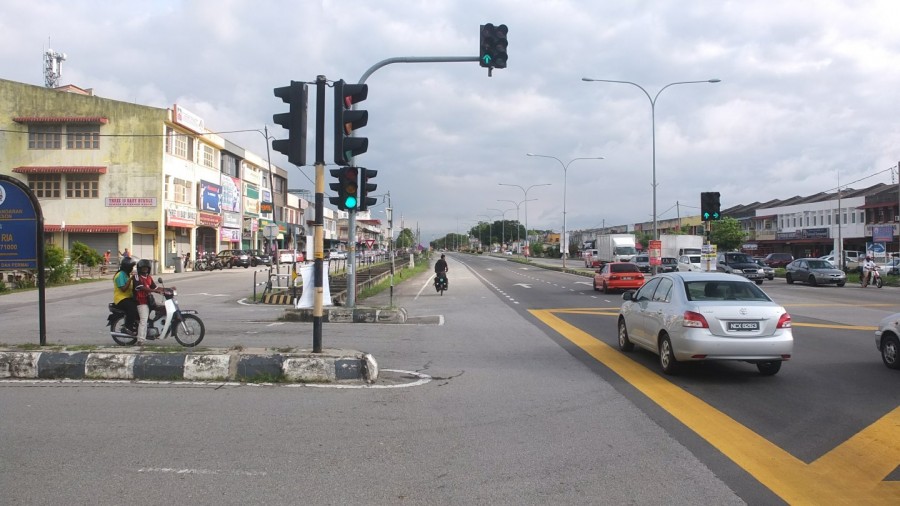 We continue our trip through Port Dickson which is not the most wonderful city (at the first glance). 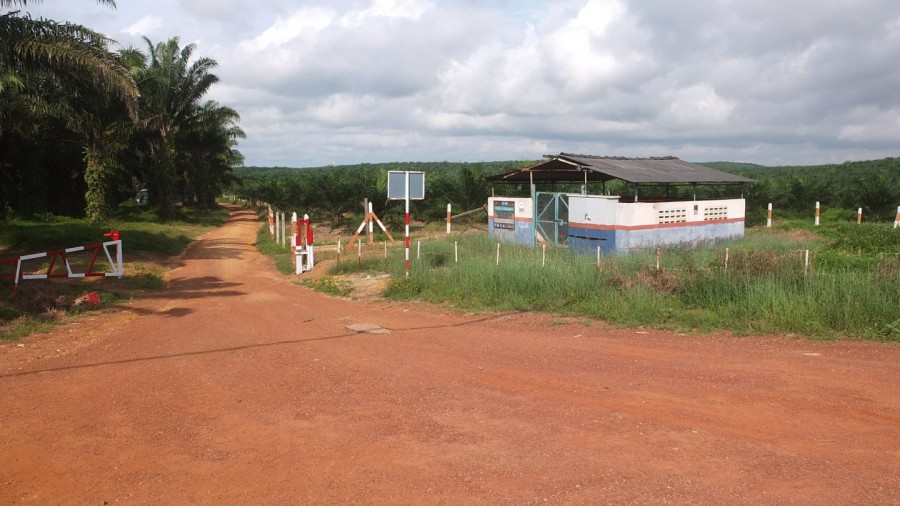 After Port Dickson, we travelled through some palm oil farms. The landscape became a bit more hilly. 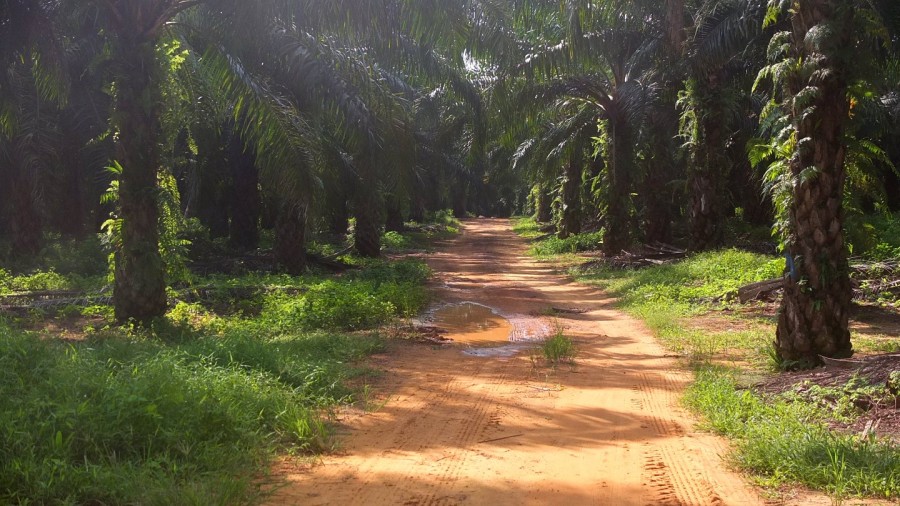 A short break in one of those farm. 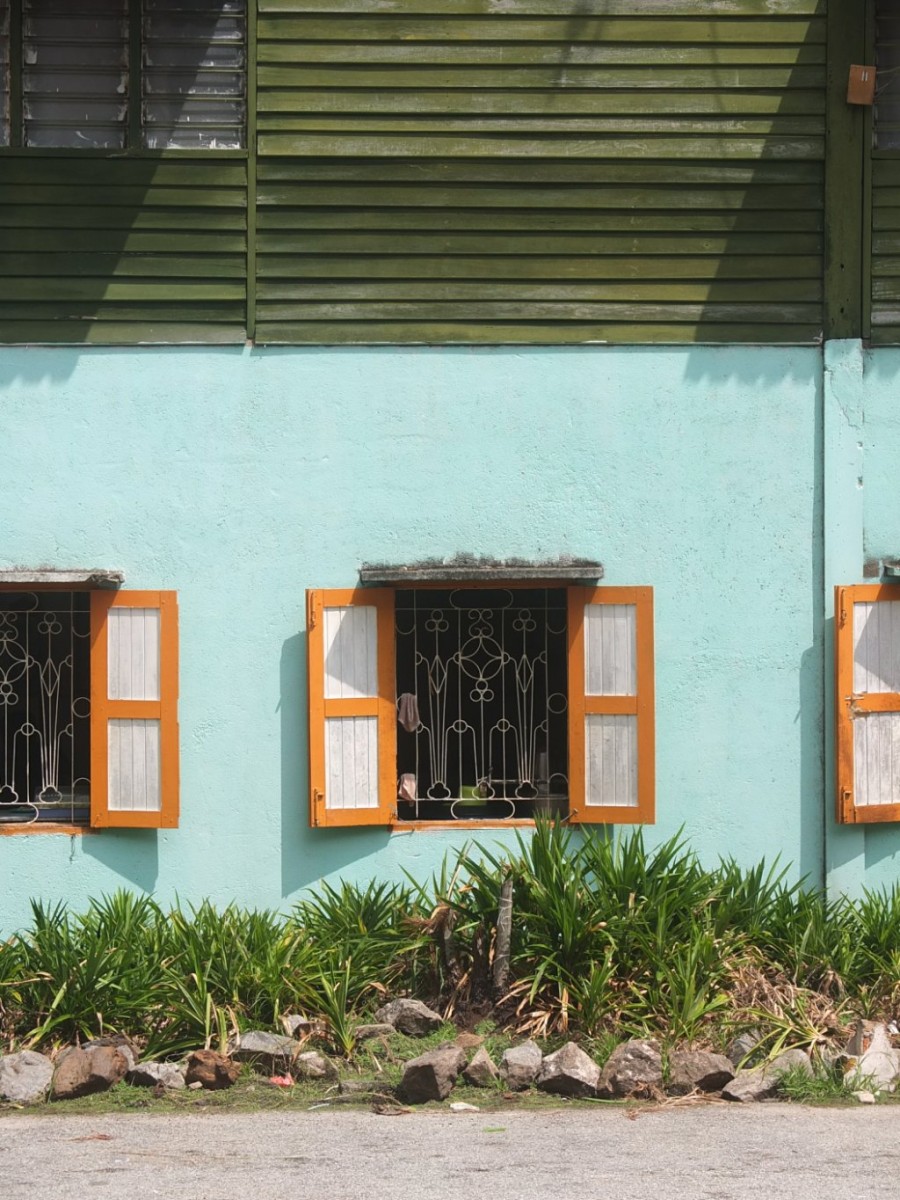 Later one after a pleasant downhill, we reached the small town of Sepang where we stopped for lunch. 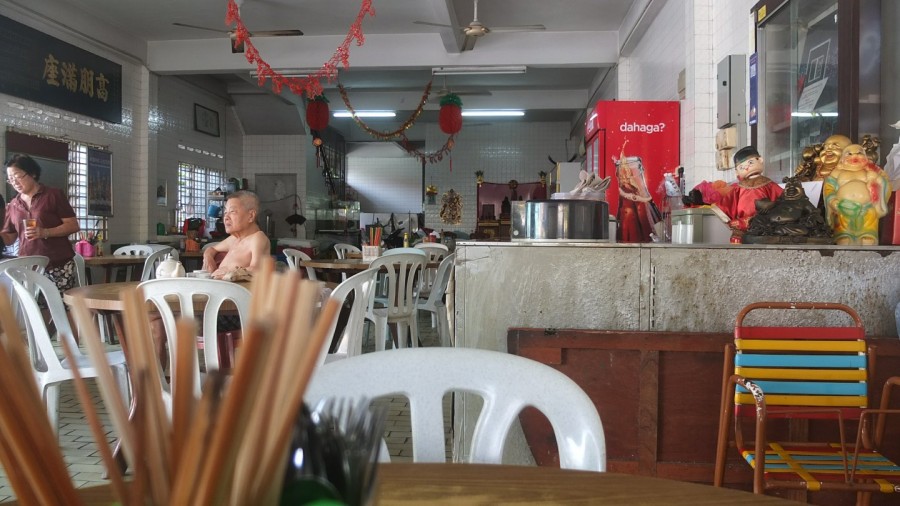 There was a chinese restaurant that looked good except the owner (the shirtless old guy) that doesn’t seem to be very friendly. 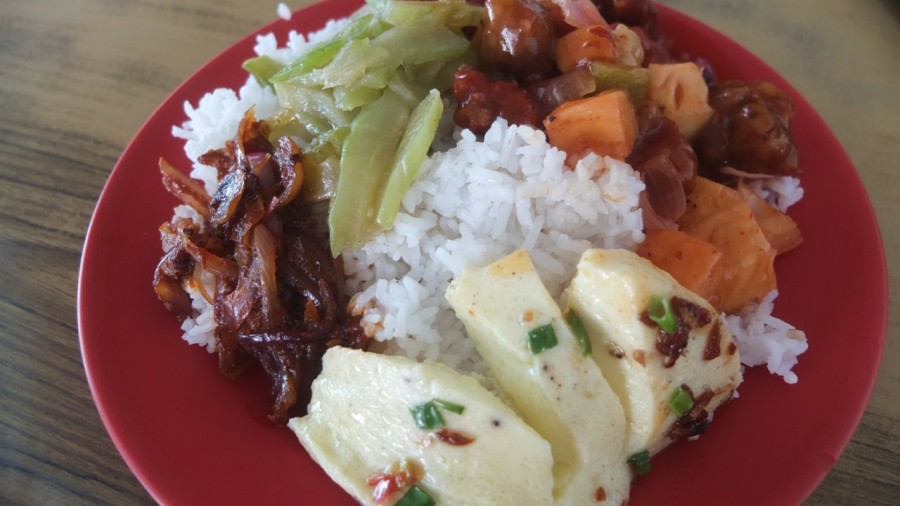 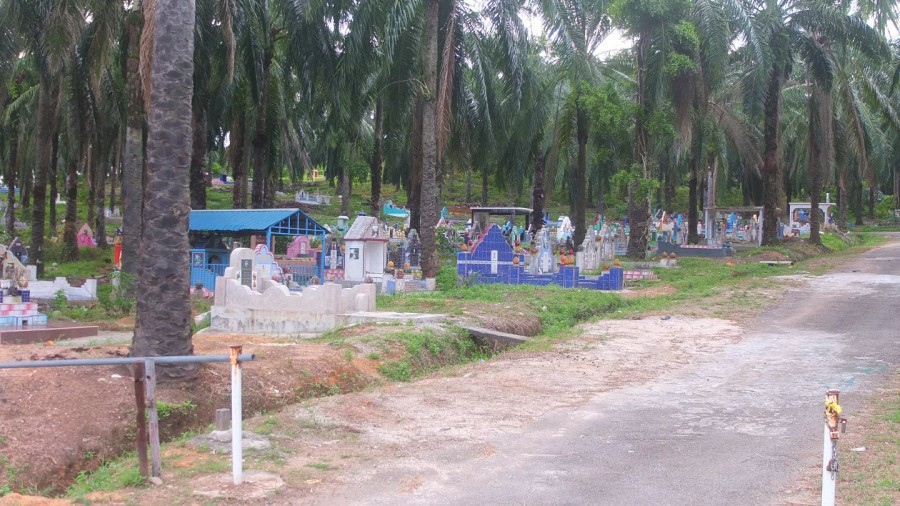 Four hours later, we were back on the road. Our lunch was one of the most expensive one we had since Melaka. We payed 30Ringgit for two. Okay it’s not that awful but compared to what we are used to now, that’s out of budget. I think the guy make us pay the four hours that we have spent at his place even if we bought some drinks over the time, sometimes. Well, that’s the rule, it doesn’t work out good all the time.
Anyway, This is a cemetery in a Palm oil farm or a farm in a cemetery. Who was here first? :-) 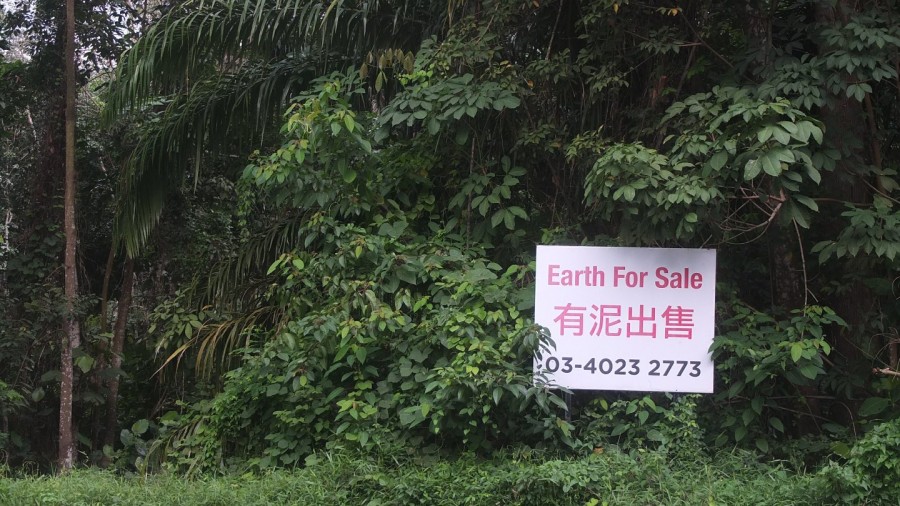 Oooh, we did not know that, the planet is for sale! If your are interested, you’ve got the number ;-) 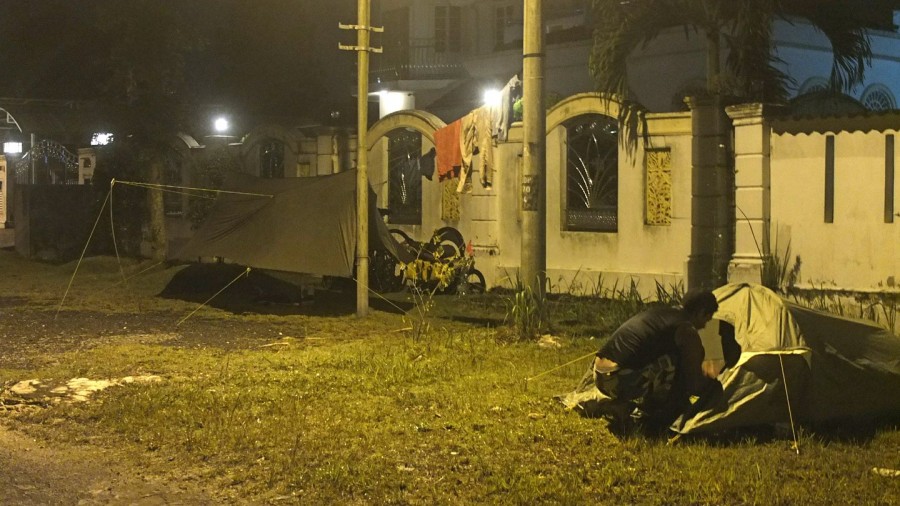 This night is one of the night that did not started very well (at first). We were cycling and looking for a place where to stay. The rain started a bit, not really funny… Finally after hesitating between two spots, we ended here, in a quiet street of a upper class district. One of the parcel was empty and as we planned to sleep there, a neighbour came to us. He asked us some questions about our trip, we had a short chat. The man allowed us to sleep at the front of his house and he said that he would text his neighbours to let them know that two homeless French cyclist are going to sleep here. That’s nice :-)
We finished set up our temporary campground and started showering when some other guys came to us. At this time we were half naked, crouched between the tarp and the wall. That was a bit embarrassing. This is how we met Amir and his family that came to us after having received the text message from the first man we met. As we explained we were in the middle of our shower, they invited us to continue that at their place. 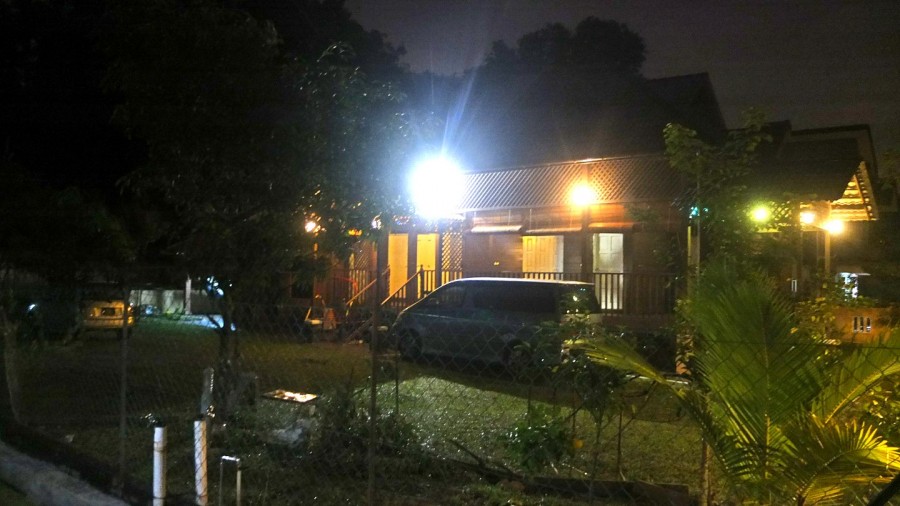 Their house is only few metres away from our campsite. After the shower (we use a hose from their garden with nice fresh water), Amir and Sabariah offered us to share some snack food with their family. They have seven kids. I’ve never seen a big family that peaceful. No one is shouting or crying. Everyone speak good english so the communication is easy. Amir is an engineer and Sabariah Doctor. This is actually their secondary house. The design is taken from the original Malaysian Kampung house. Amir explained that decades ago, a Kampung house was cheaper to build than a concrete house. Today, this is the opposite way. I guess this is because the people who know how to build them are in small number. Having a Kampung house is also a return to traditions too and it has a price. Everything is business.

We had a great time with Sabariah and Amir’s family. An hour or two later, being tired, we came back to our campsite to sleep fresh. Tomorrow morning, we will have breakfast at their place again :-) Good night!