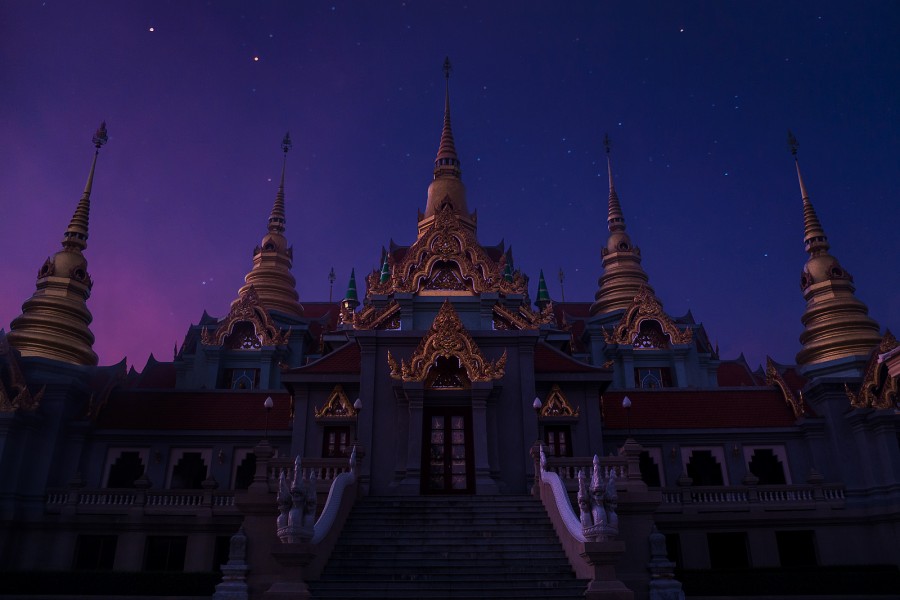 Few! my blog is still surviving! The last two weeks were full of different events and I did not find any time to write anything. Well, I kept doing the images, the maps and uploading some tiny videos but everything was offline. Very useful isn’t it? I’m now in Bangkok, but let’s come back two weeks earlier, here when I left the story. We are back in time :-) That following day started really early this morning. Stephane wanted to catch the early lights this morning so we woke up at 5am. The night was very short as we had to change our spot in the middle of the night because that bloody dog never stopped barking at us. Result: four hours of sleep, shuh! Behind this picture, there is actually two: One for the sky, and one for the temple. I think I’ve pushed my camera to its limits this time. The quality is not as good as I would like but the next camera of my dream is far too expensive and maybe too big too for my travel style. I have a week to think about it before getting to Bangkok. Anyway, let’s start that day before I forget everything haha :-) 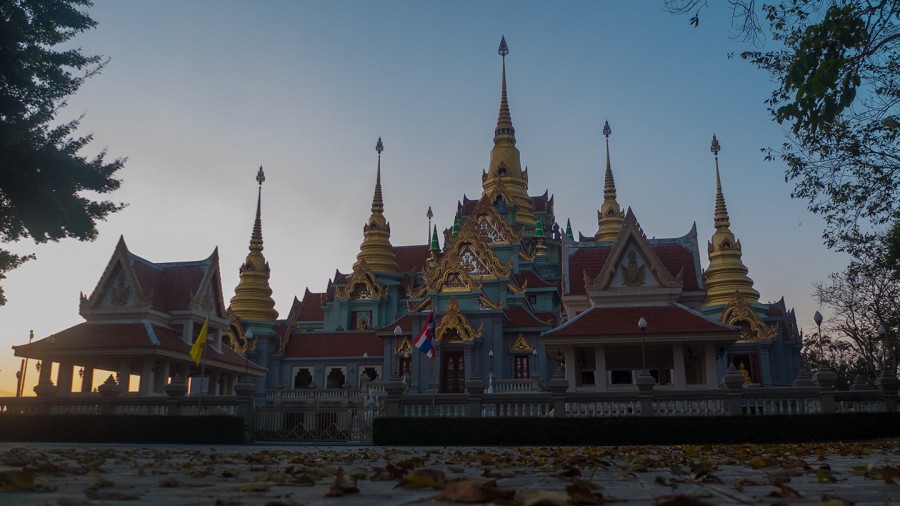 The first lights of the day are pasted. Stephane moved on the other side of the temple again to get different sunrise colors.

I should do that more often. That’s a Time Lapse. Unfortunately it’s too short and I did not take enough pictures. Next time, next time :-) 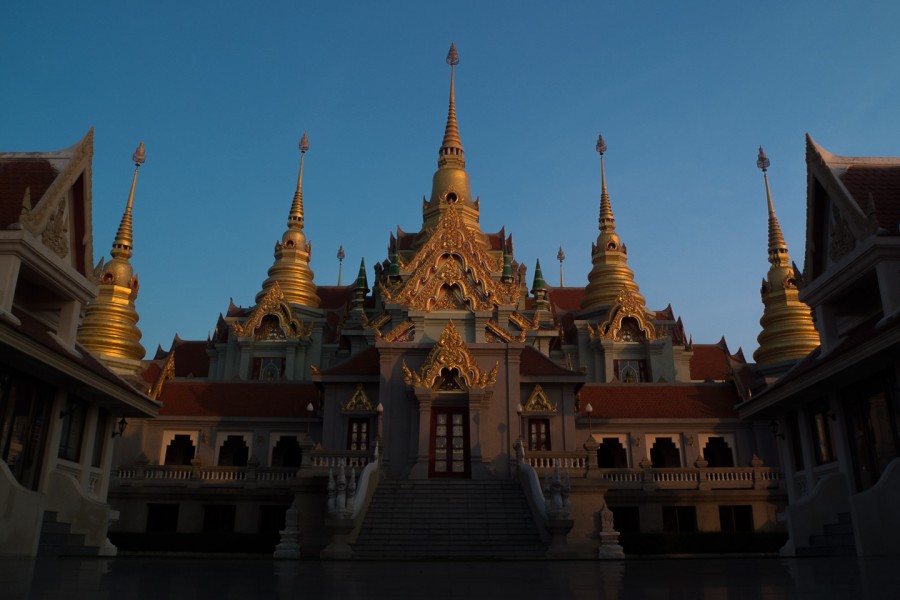 I’ve joined Stephane on the other side. Well, that’s nearly the same as yesterday. Nothing magic to me. 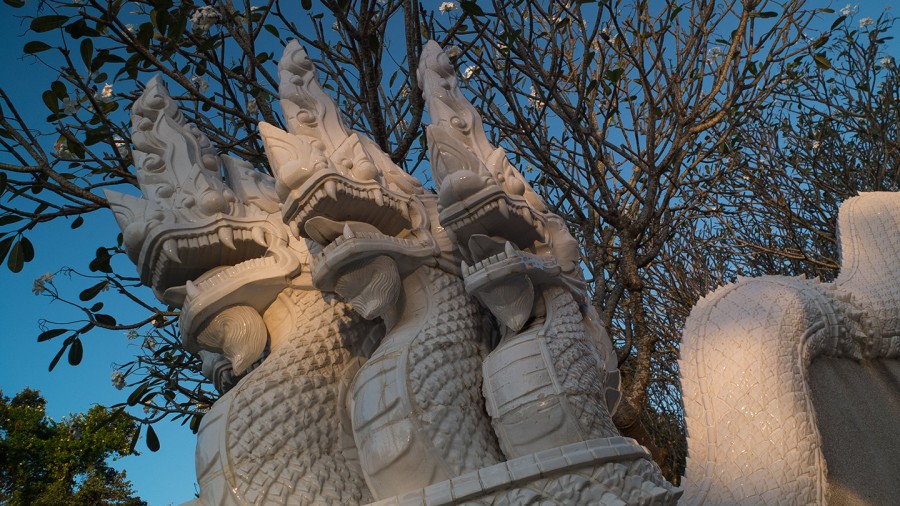 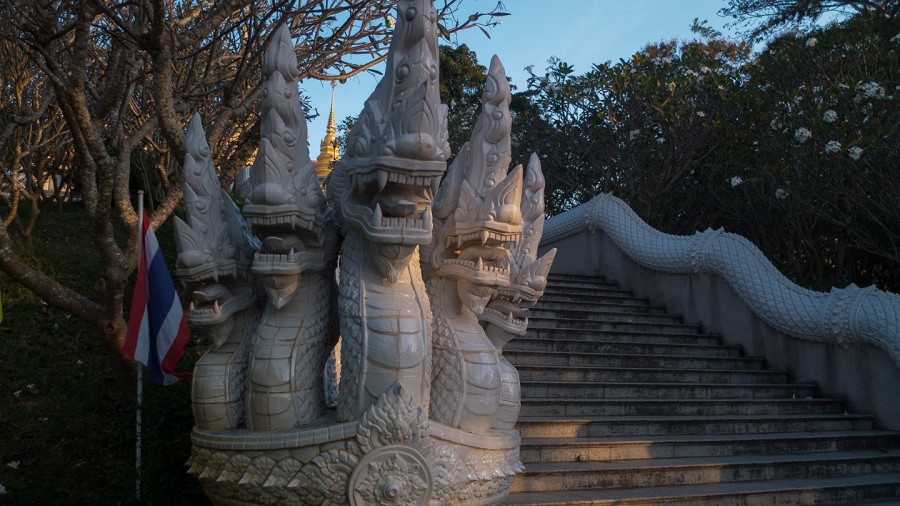 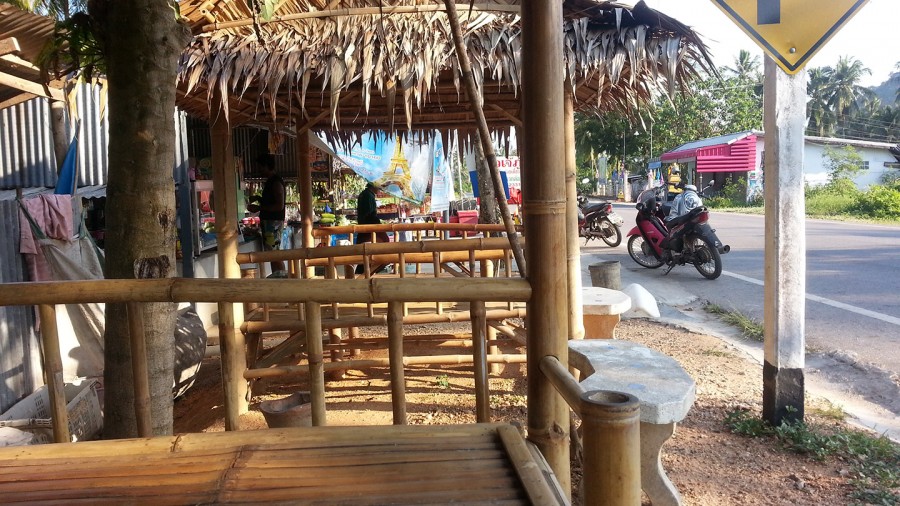 We are back on the road. Well, almost… This is breakfast time :-) 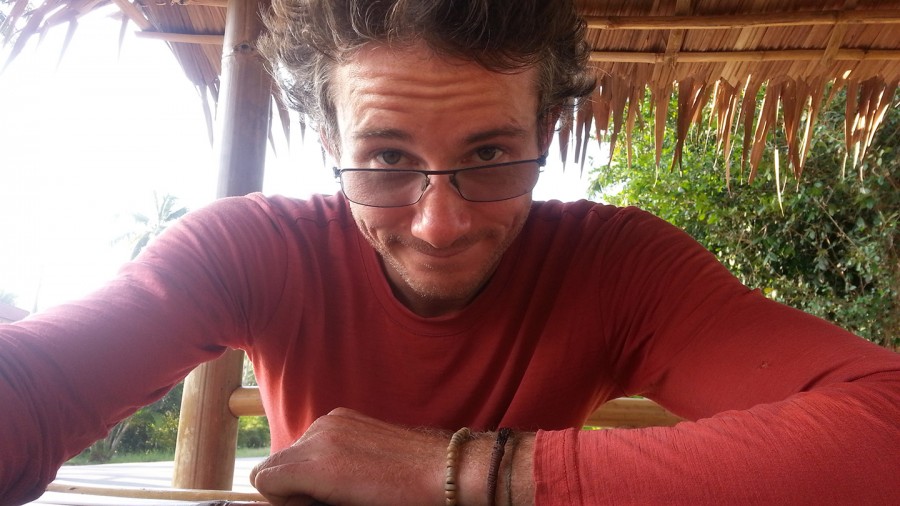 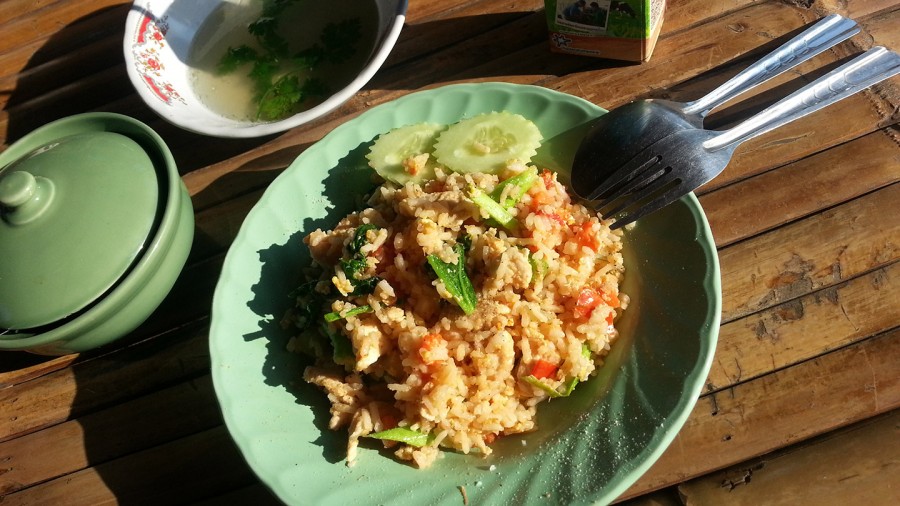 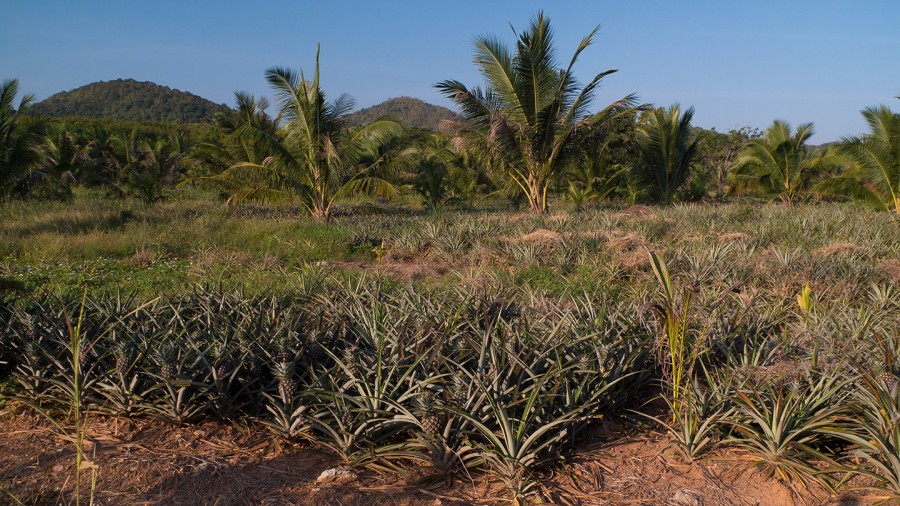 Wow! Look at this field. 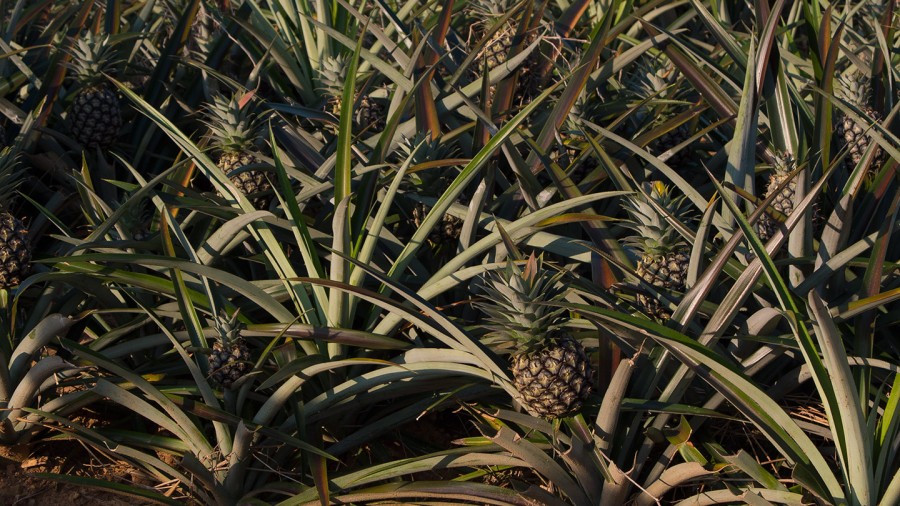 Finally, I can see with my own eyes how look a pineapple in it natural environment haha :-) 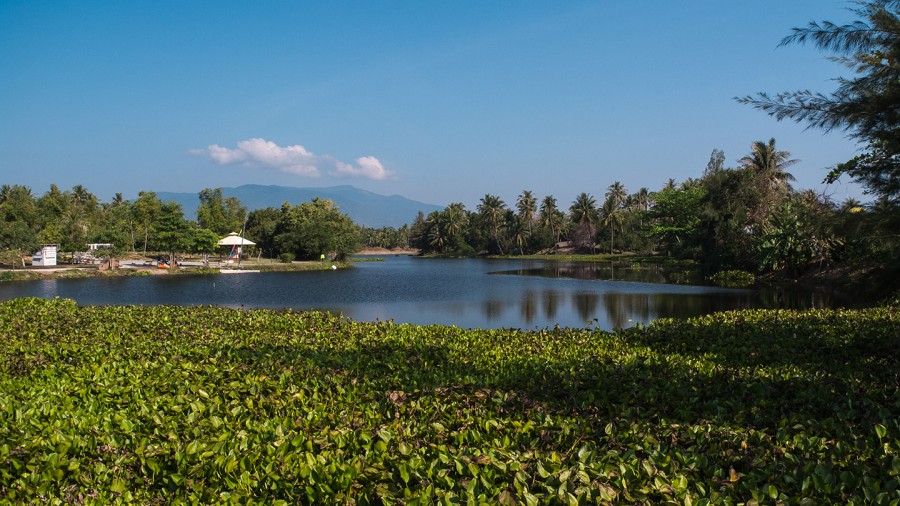 We keep cycling towards the sea. We are not very far now. 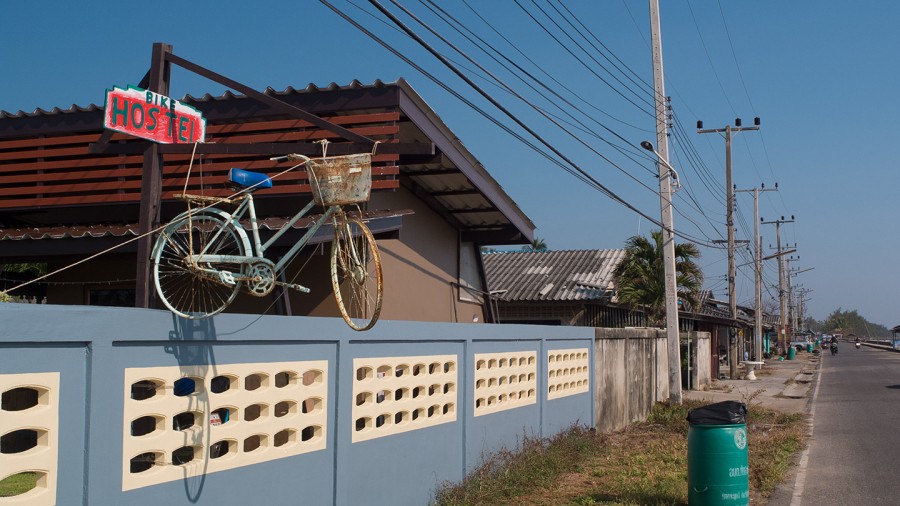 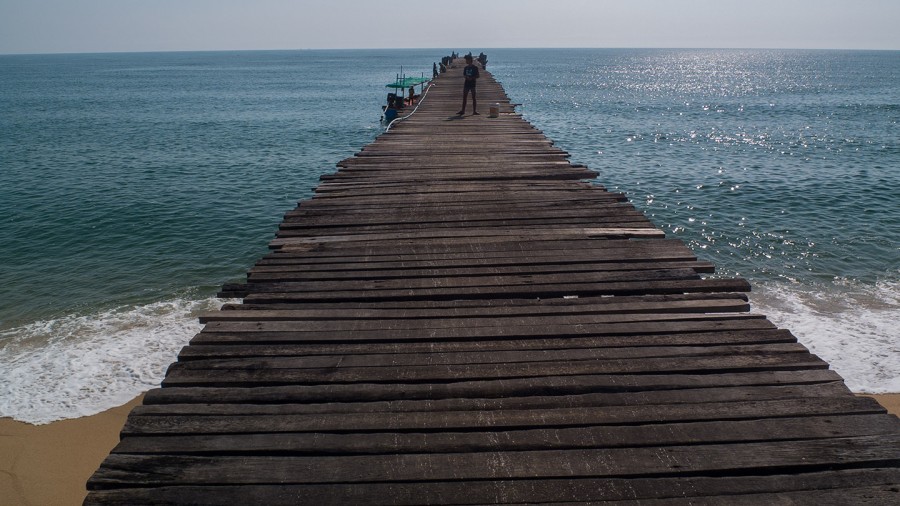 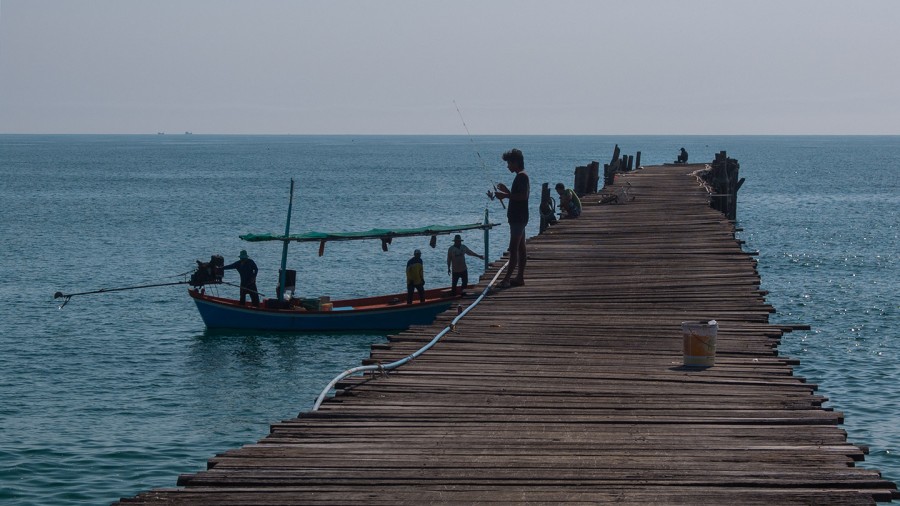 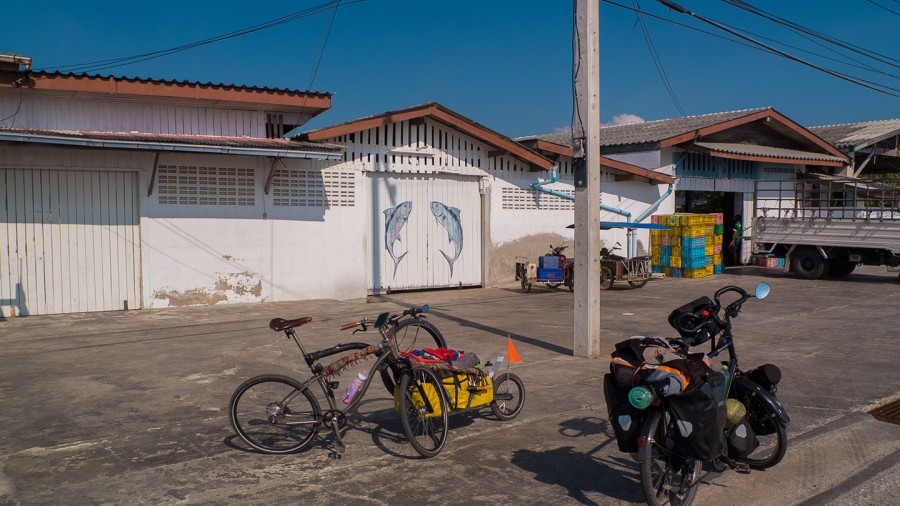 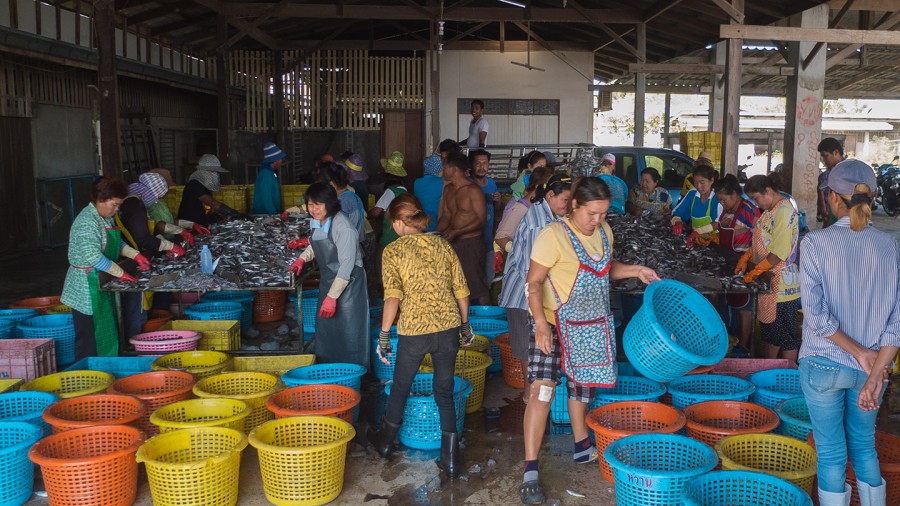 Everyone is working together. They certainly sort the fish by size, I guess. 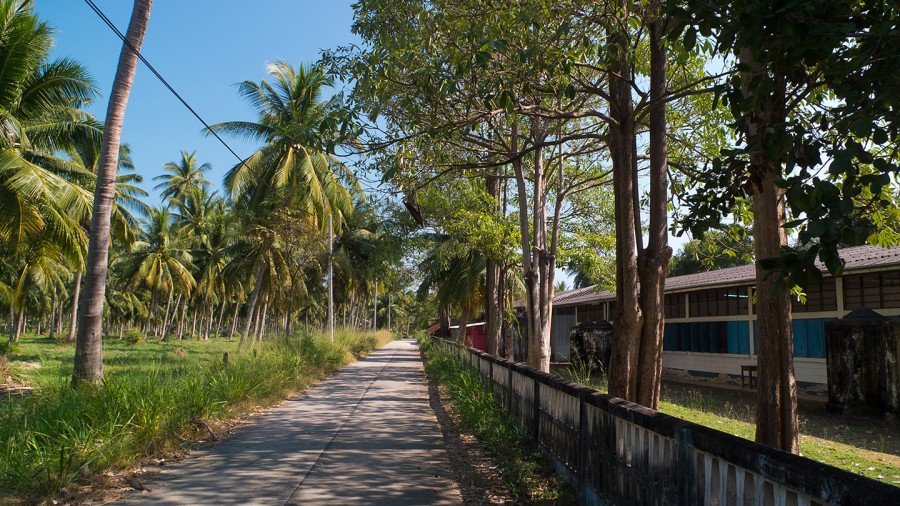 Until now, we have still avoiding the highway pretty well. 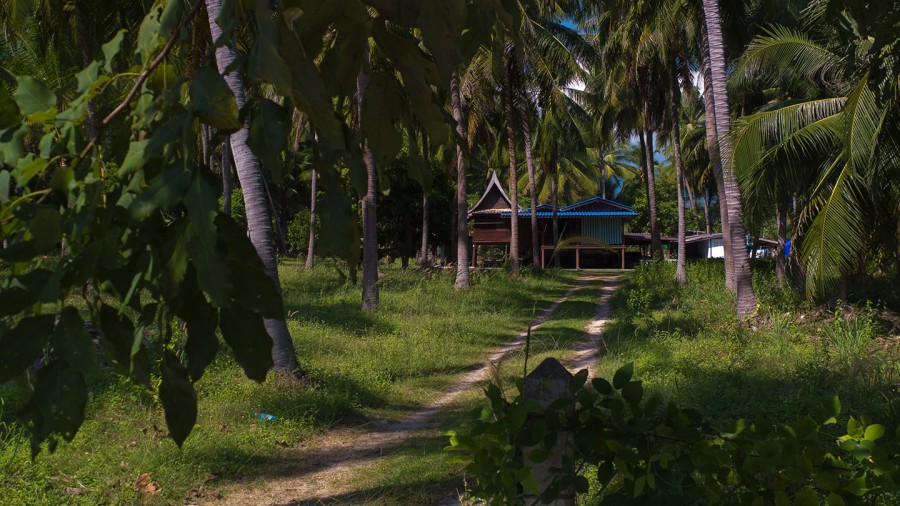 Nice wooden house at the back of its greeny garden. 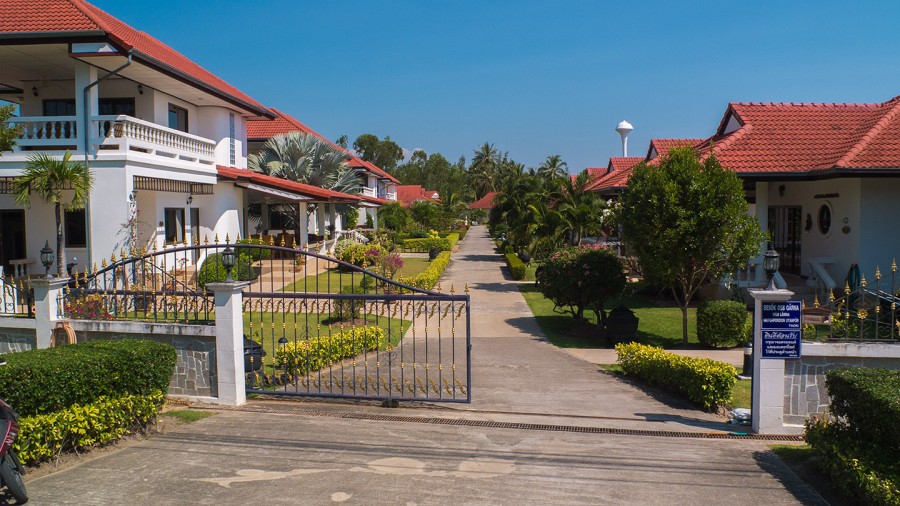 Since a while now, we have been observing a lot of these new properties along the road. They all look the same, they are quite big, they don’t look Thai at all. That’s tourist houses for sure… 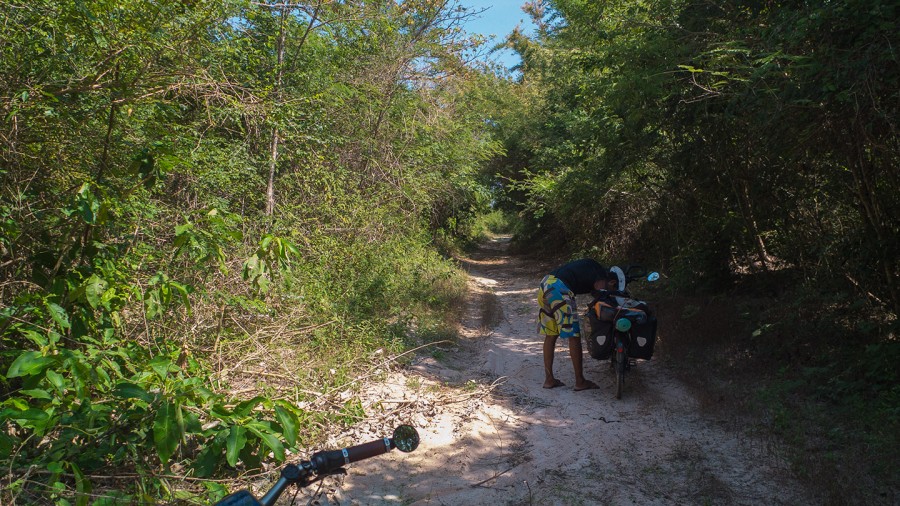 We had two solutions: come back on the highway or cycling through a national park. The second solutions sounded much better but now we are here, a doubt is coming. 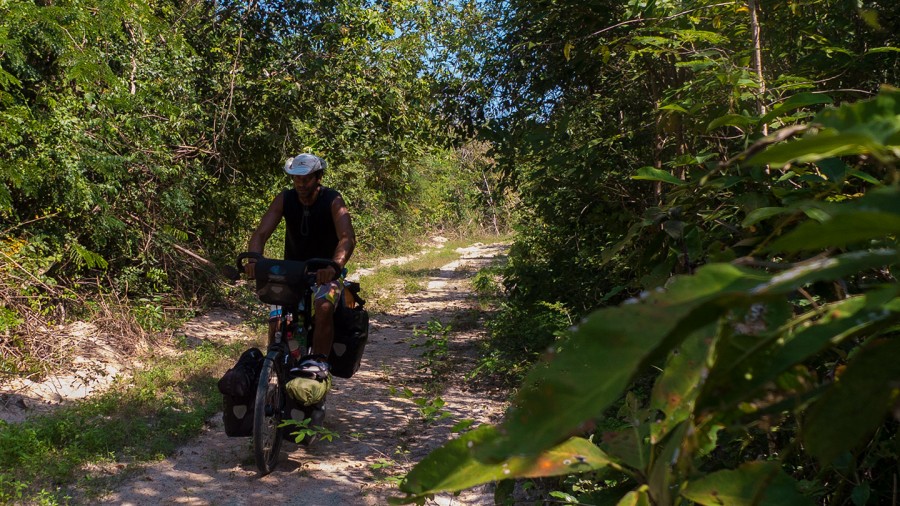 After few kilometres on a chaotic sandy track, we are coming back from where we start from. That’s going to be the highway unfortunately… 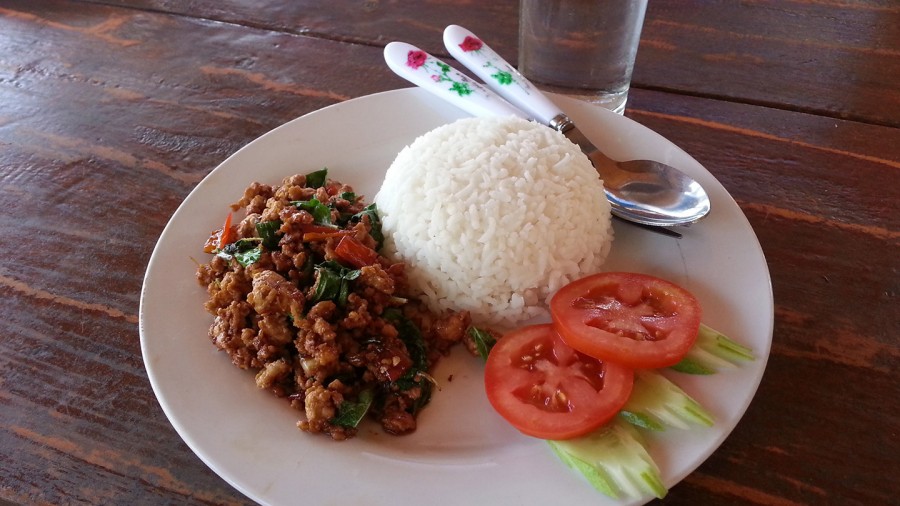 But before that, let’s have some lunch: Steamed rice with fried chicken, basil and veggies. 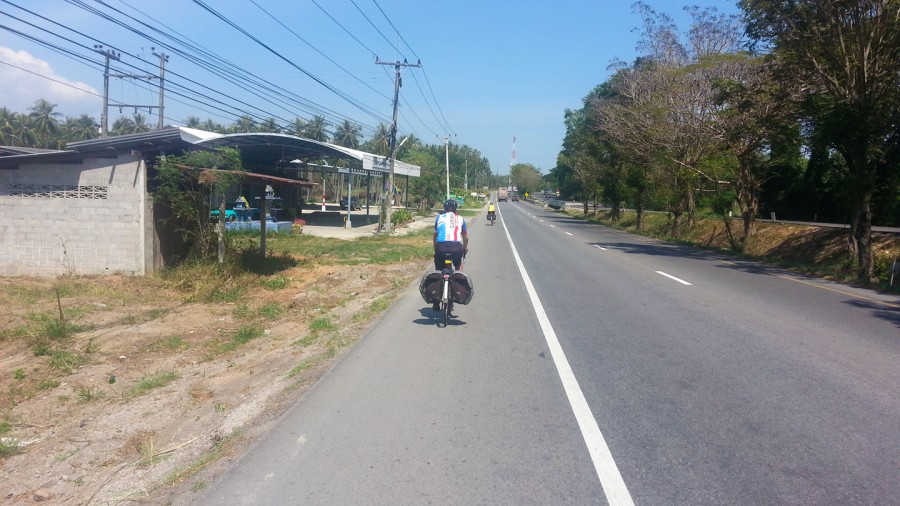 Few minutes after we got back on the road, and just before we hit the highway, we’ve seen two cyclists like us! I’m trying to catch them up! 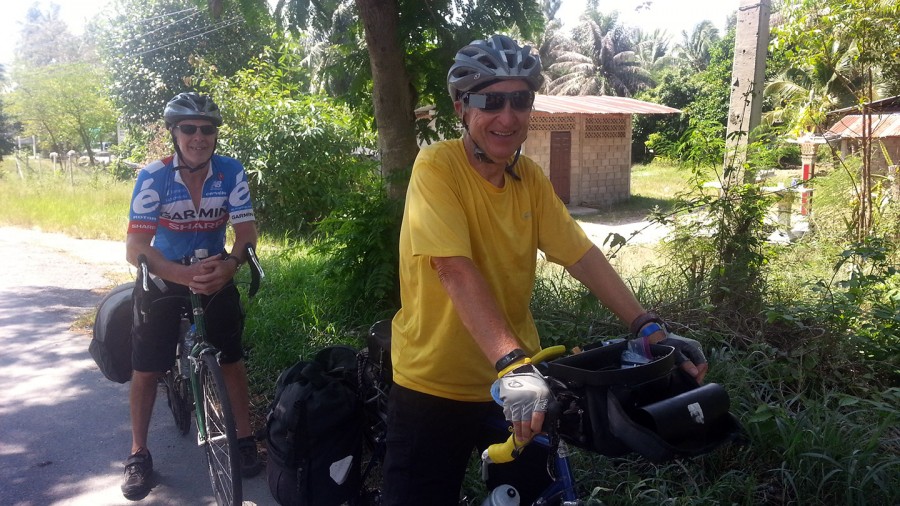 Those two guys met in Thailand 5 years ago. The yellow T-shirt is from America, the blue one from England. They have done the same trip in Thailand for the last 5 years. At 66 and 60 years old you can see that the age does not matter at all. That’s in the head!

Finally we kept going for a little while until we reached the next “Amazon Cafe” where there is free WiFi and plugs to charge our stuff. After that, around 4pm, we came back on the road until the next city where we found a school where to sleep. A guy who was working there, take us around the school, showed us everything we needed like showers, toilets, where to set up our campsite. He was very kind. Lucky us again!  That’s it for today, Cheers!