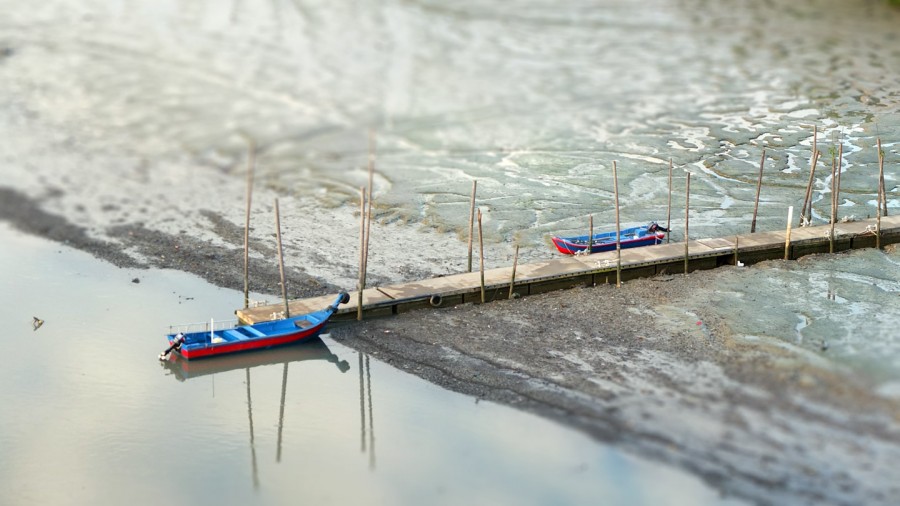 This time we are coming to Penan by ferry. The crossing cost us 1.40 Ringgit (bicycle included). That’s cheap. I’ve heard about Penang since I’m in Malaysia. Georgetown is an historical city and the capital of Penang. It reminds me Malacca in some places and has too much shopping malls for me. The development of the city seems fast. Lots of tall skyscrapers are in construction. There is lots of traffic. I’m disappointed that there is no beach in the city where people can walk or have a drink. We must have to go further out to see that. In general I can see that Malaysia (like Indonesia) doesn’t really care about improving the area next to the water. Maybe that’s the case on small islands but from what I’ve seen until now, this is not really the case. 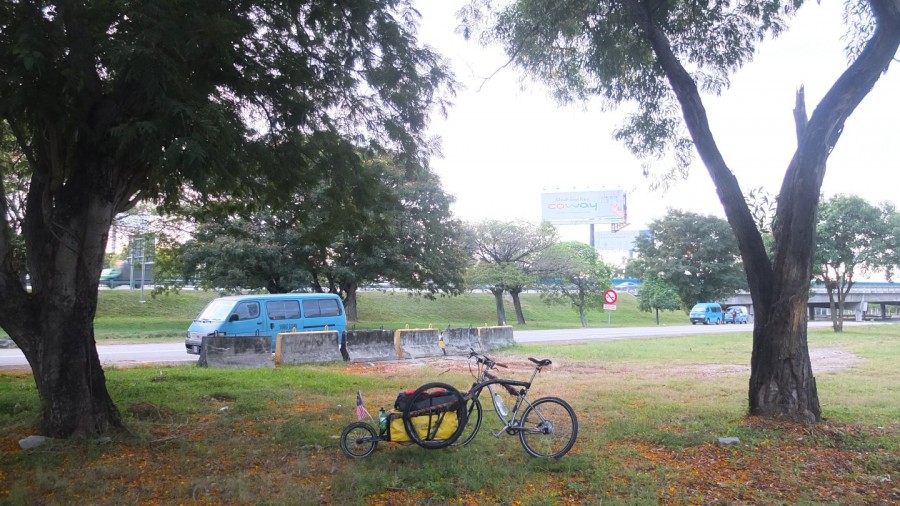 That’s where we slept last night. The highway is not far. The noise being constant, it did not bother us, especially after 119km cycling :-) This morning, during we were packing our stuff, some taxi drivers pointed their finger at the left tree. The guy said “very dangerous”. We look at it and saw the same big wasp nest that we have seen in Borneo, during our boat trip with Mr. Aji. We did not see that yesterday night of course. Like every insect or animal in the nature, if we don’t bother them, they don’t attack for no reason. We were fine. 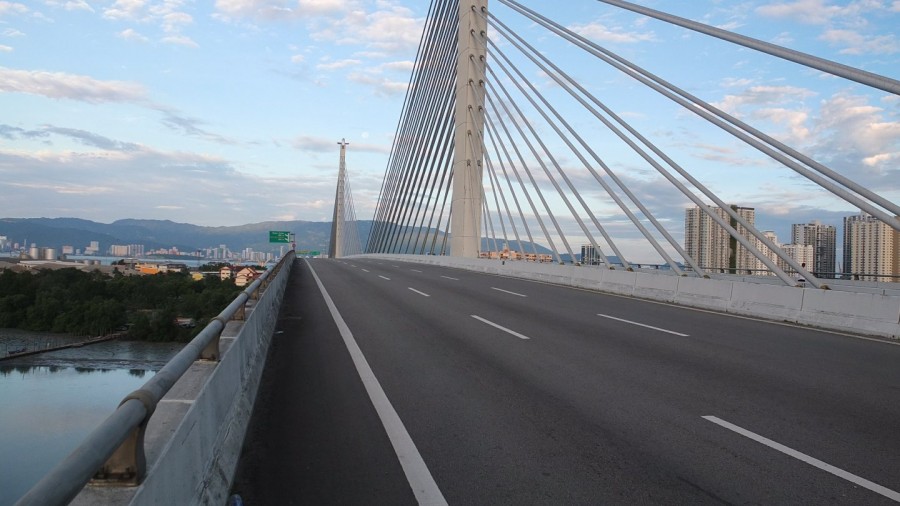 We are cycling towards the ferry terminal. That’s a bridge but not the one of yesterday. 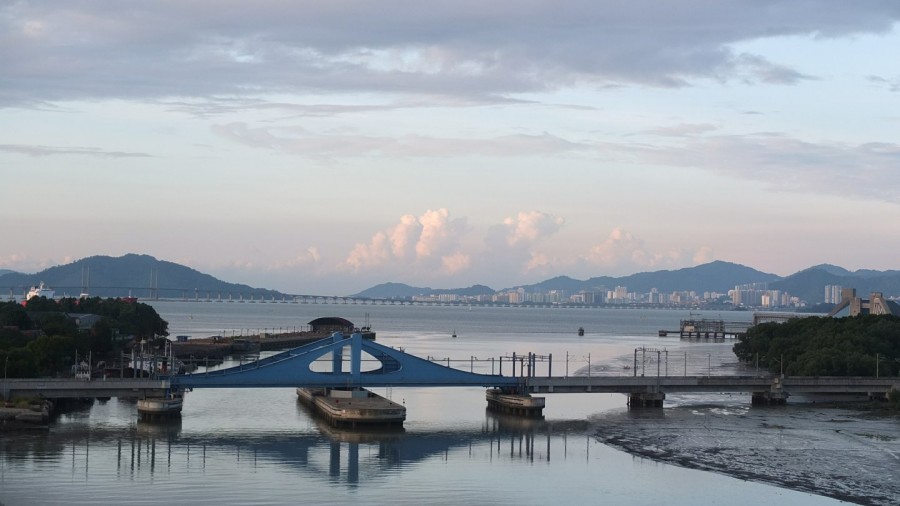 On the background, that’s the bridge we could not cross yesterday night. 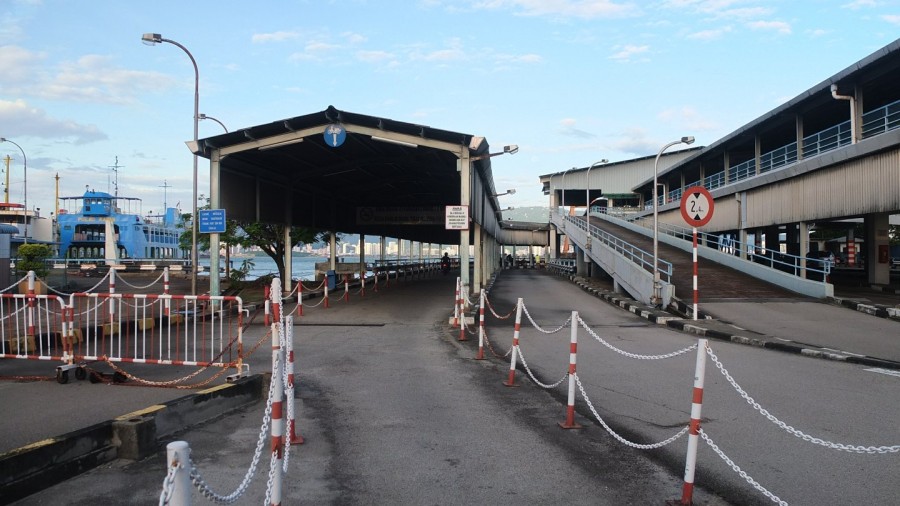 We’ve just payed and now have to wait at the end of this shelter. 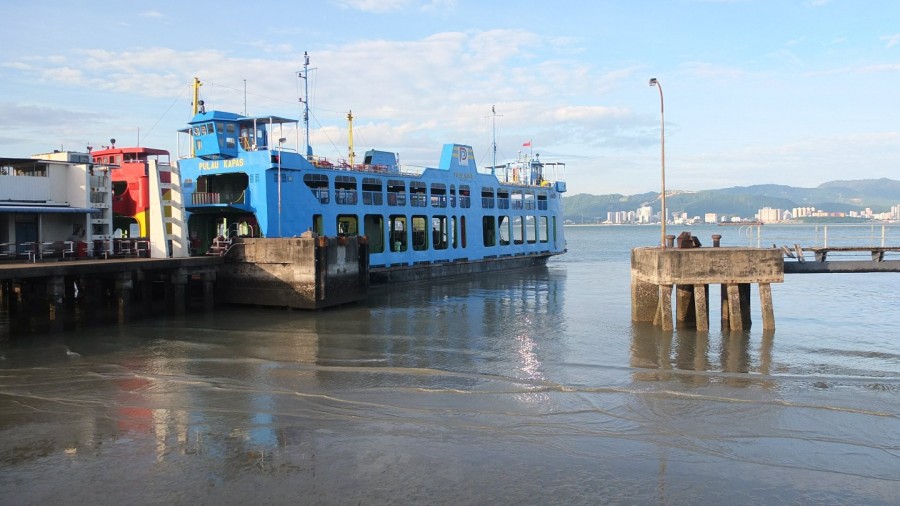 This is the kind of ferry we are going to get. Today (Sunday) only one ferry is running but normally there is three, about one every 20 minutes. More details here. 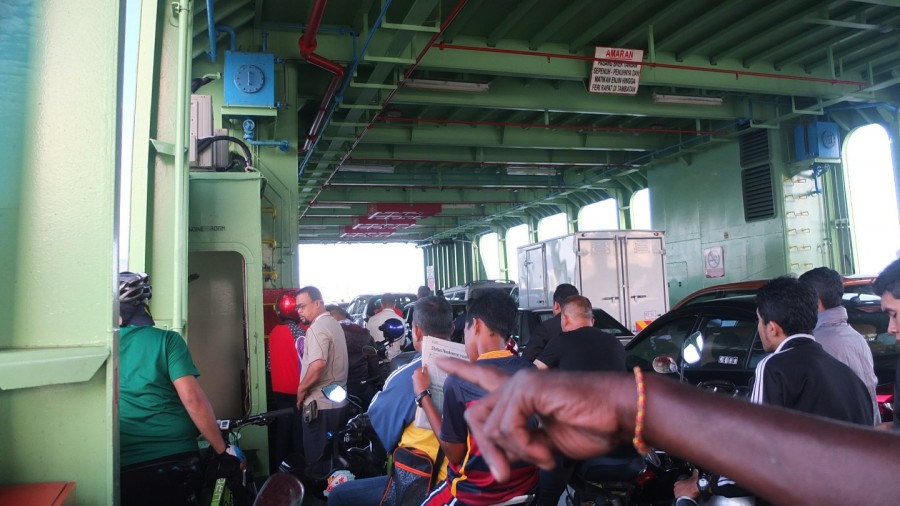 Hey! What’s that arm in the middle of the picture. I think that’s the same guy who told me: “Do you know what is in that barge over there? he asked. “No, I don’t. Coal?” I’m going to learn something I guess) but the guy’s answer was : “Actually, I don’t know too”. Ah… ok… that was very useful. 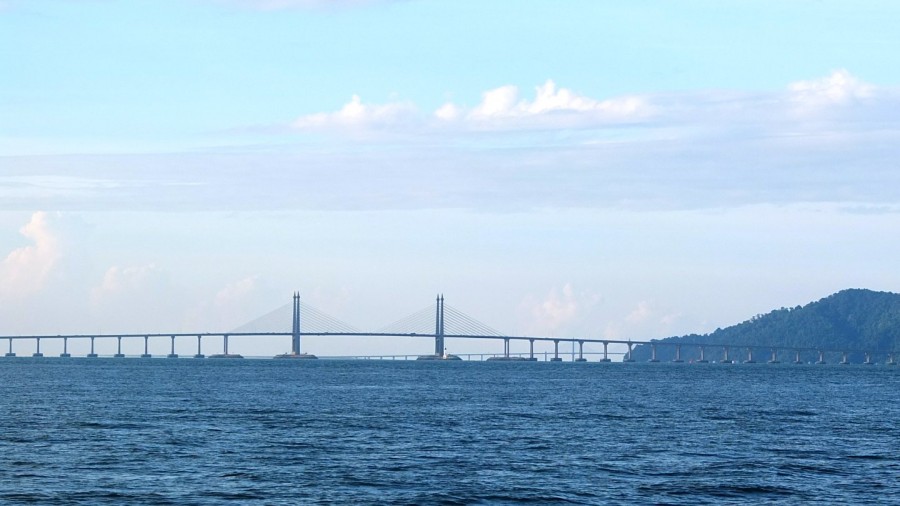 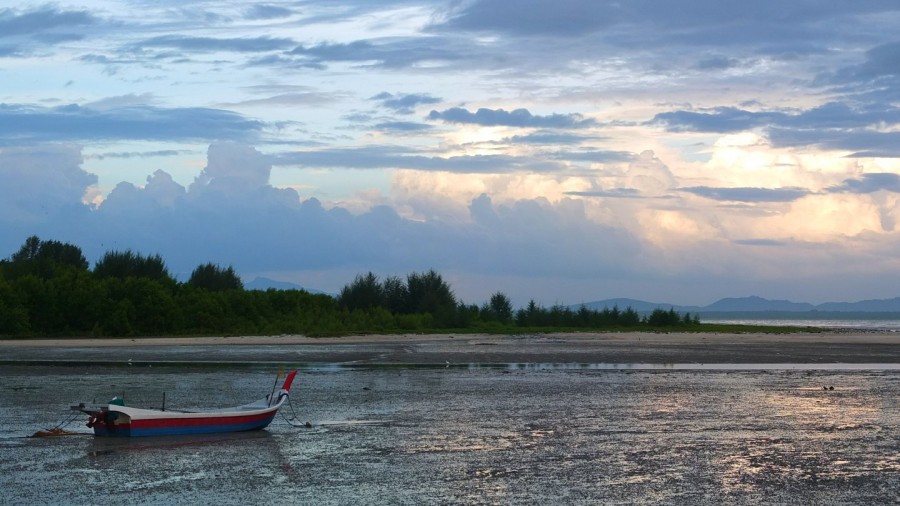 We finally got to Penang. Stephane went to a backpacker where he will stay few days. Myself, I don’t know yet where I’m going to sleep. I’m looking for a spot. 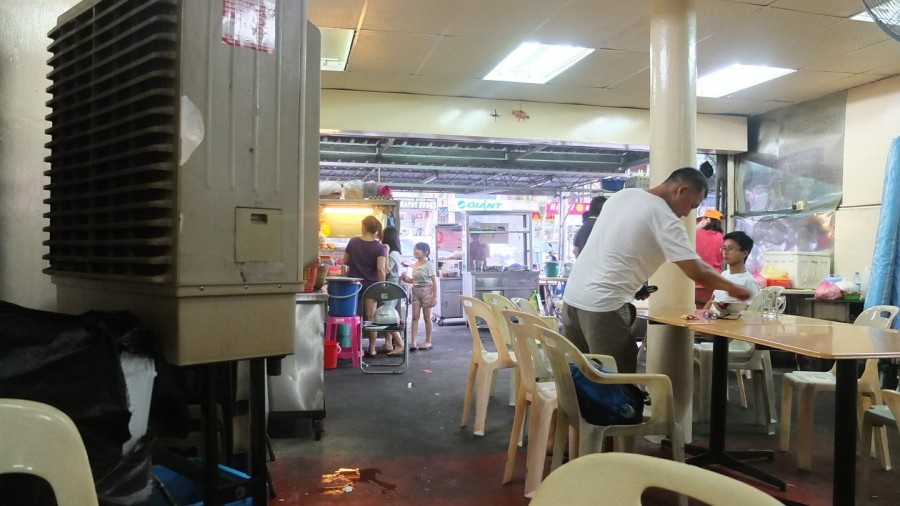 It took me about 20 minutes to find a very nice and quiet place. I’m going to have some dinner and will come back there after that. 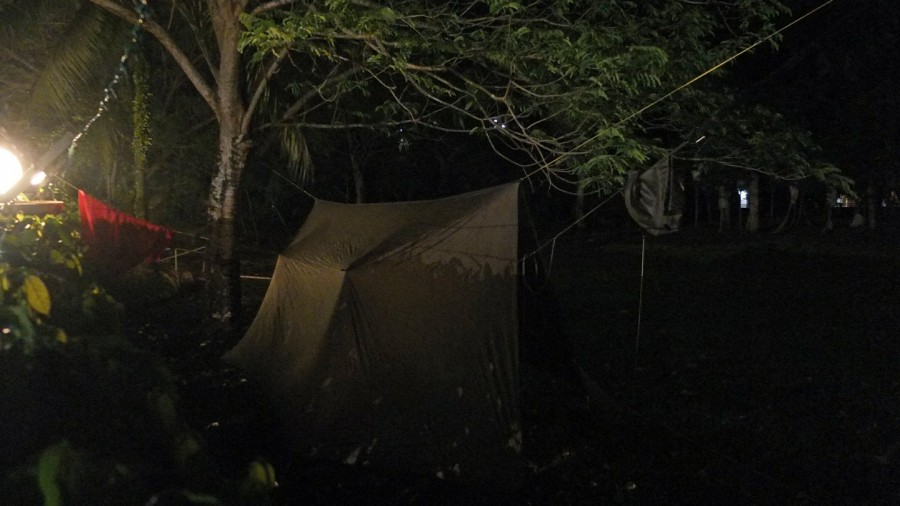 This is it. Ok, I know we don’t see very well. I should have take a picture this late afternoon. There is actually a large area with grass and trees along a fence. At it’s back, there is some plantations, essentially popo trees. At the front, I’ve seen a kind of warung where people had some food and drinks. I’m not sure if they live here are not. I said hello and cycled to the back of that garden. Nobody seems to bother apparently. 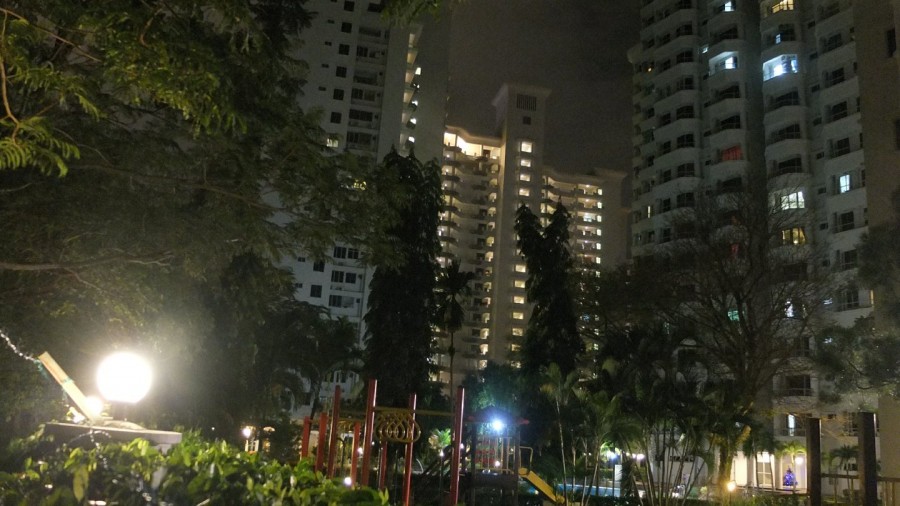 On the other side of the tree fence where I’ve set up my campsite, there is tall building with apartments. Most of them seems vacant. I think I will be super fine here. No problem at all. Good night!