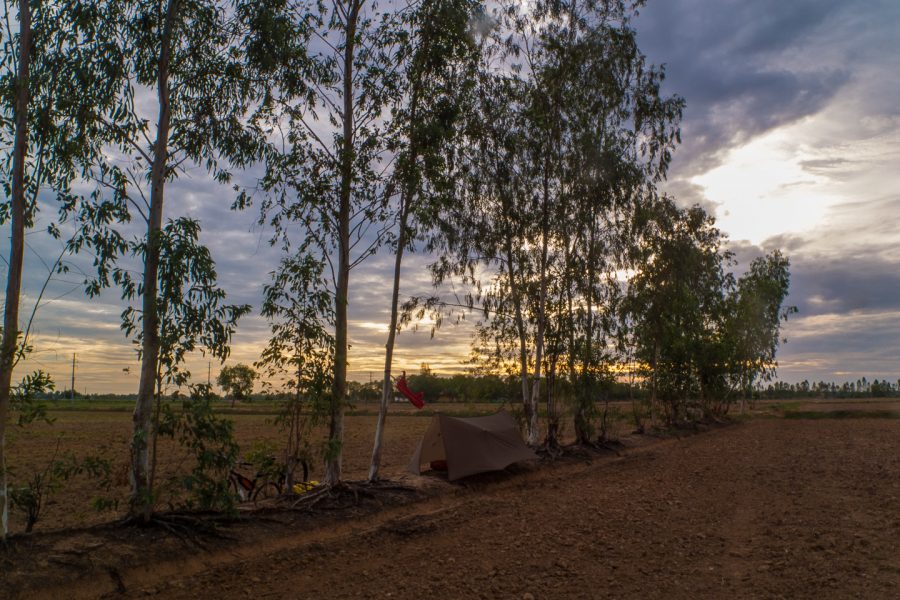 First night in Cambodia! That was a good one :-) Nobody bothered me, I was far enough from the main road to avoid the traffic noise. I was lucky because this row of trees has only one spot that I could use. One is enough though :-) I might arrive around Siem Reap today but I will manage to find a spot just before the city to save one night in a guesthouse. Actually, for this second night, I’m going to sleep in a hotel but I don’t know it yet ;-) Cheers! 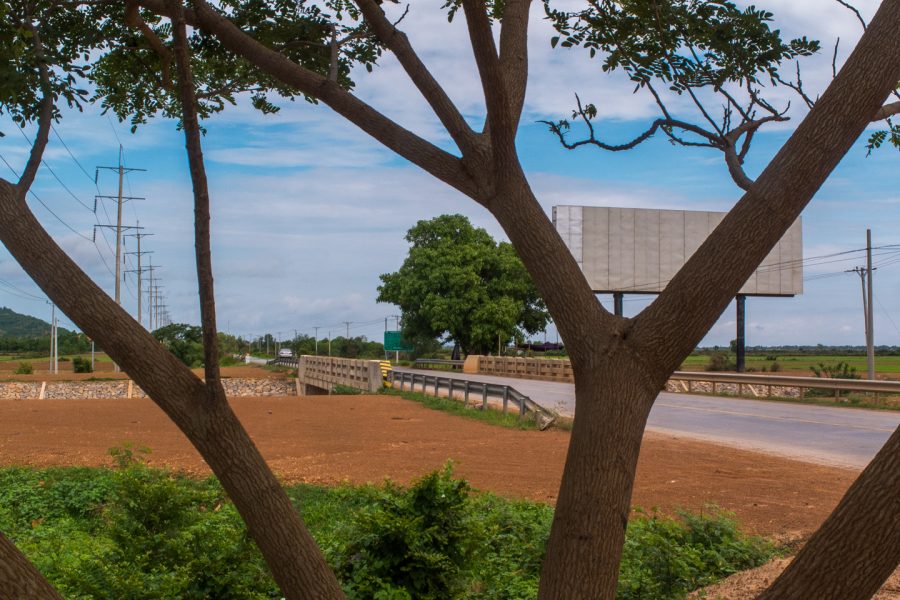 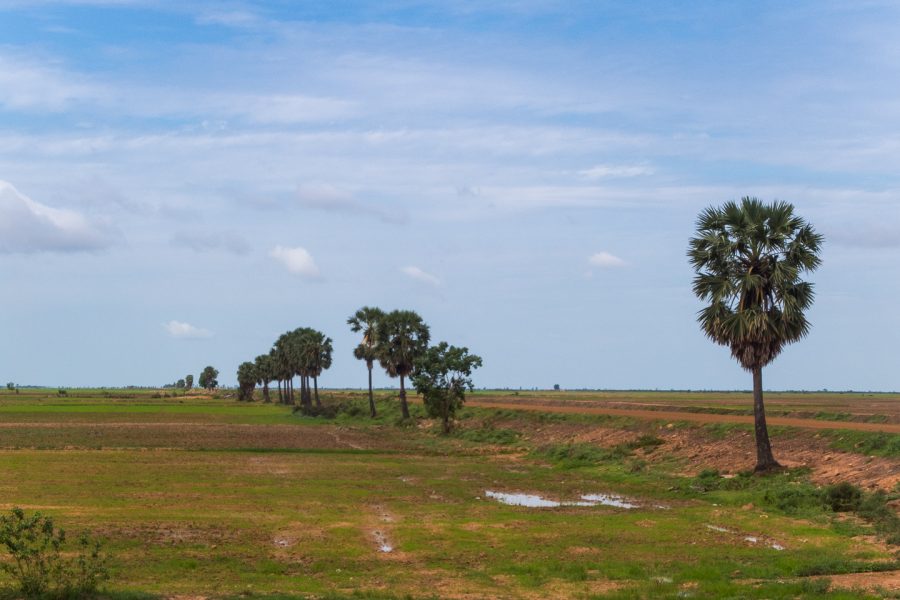 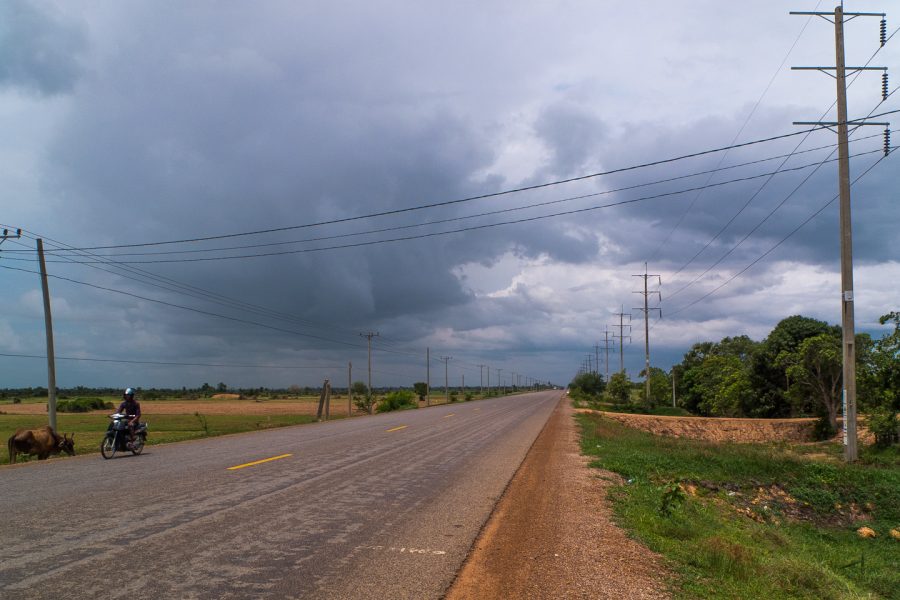 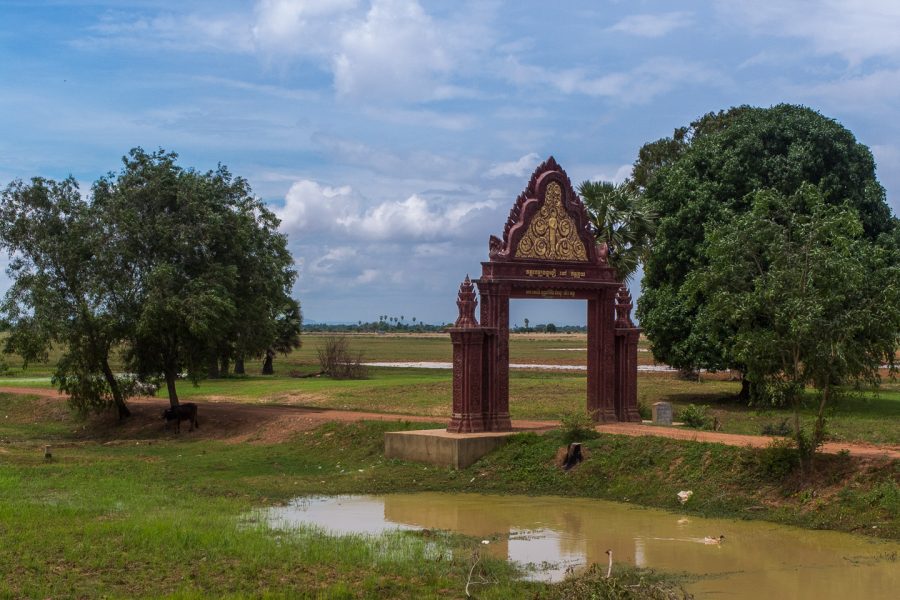 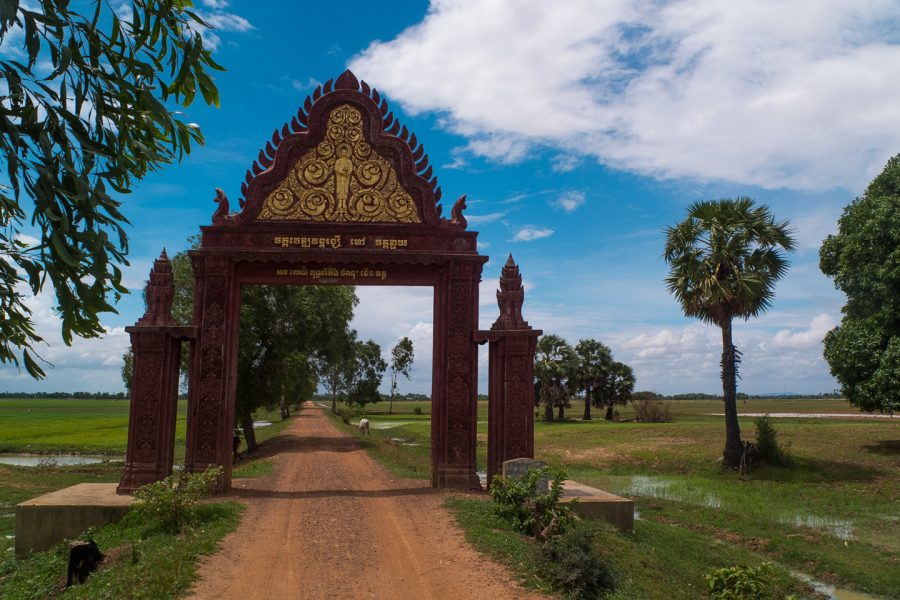 It might lead to a village or some sort. 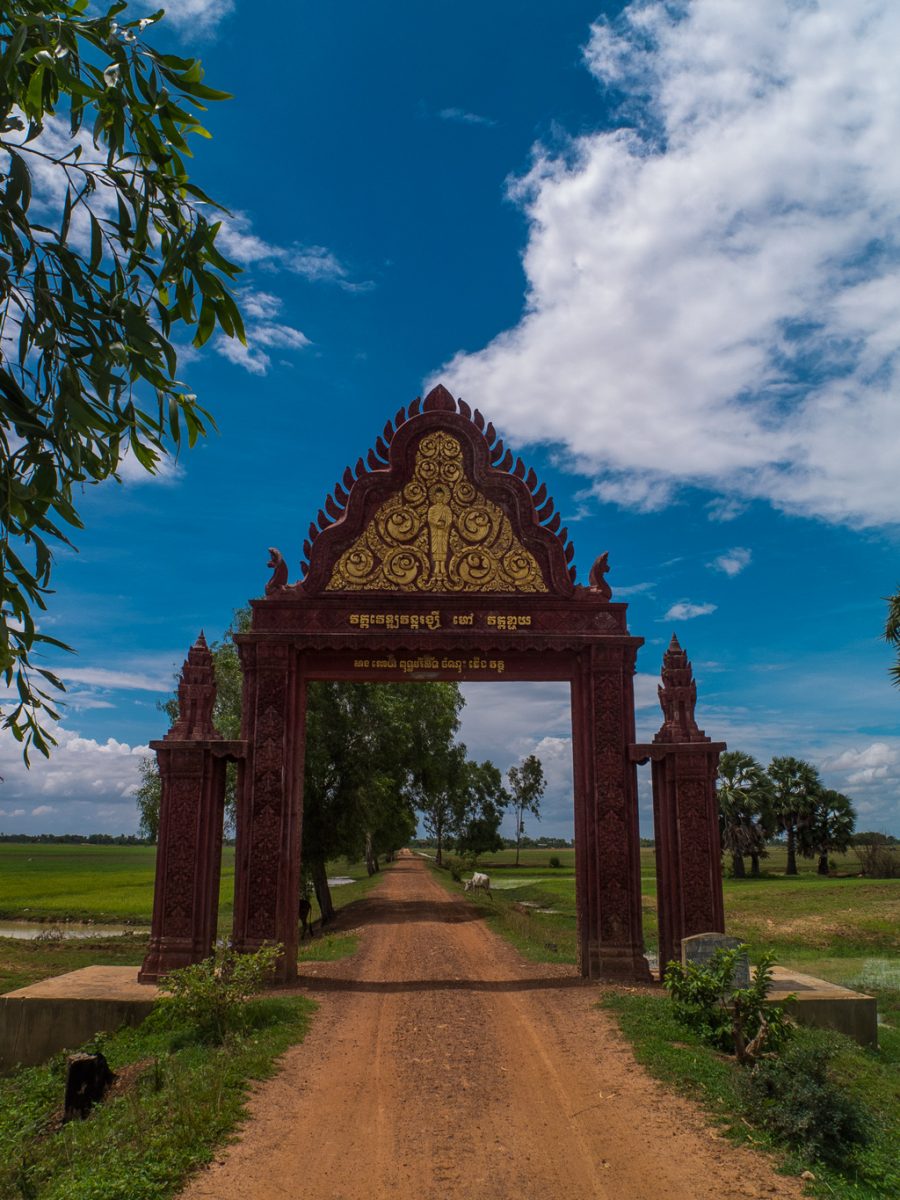 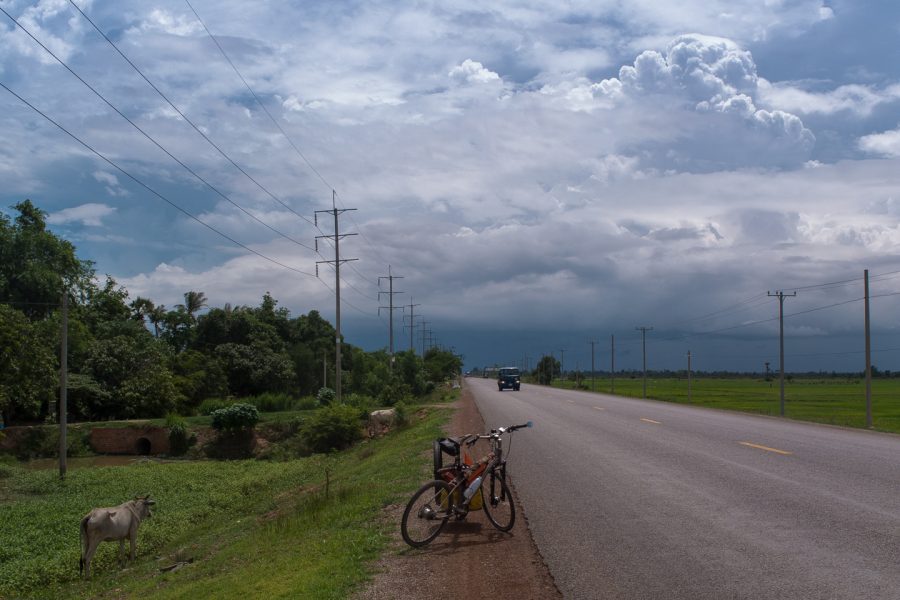 I’ve got clouds front of me of behind too! 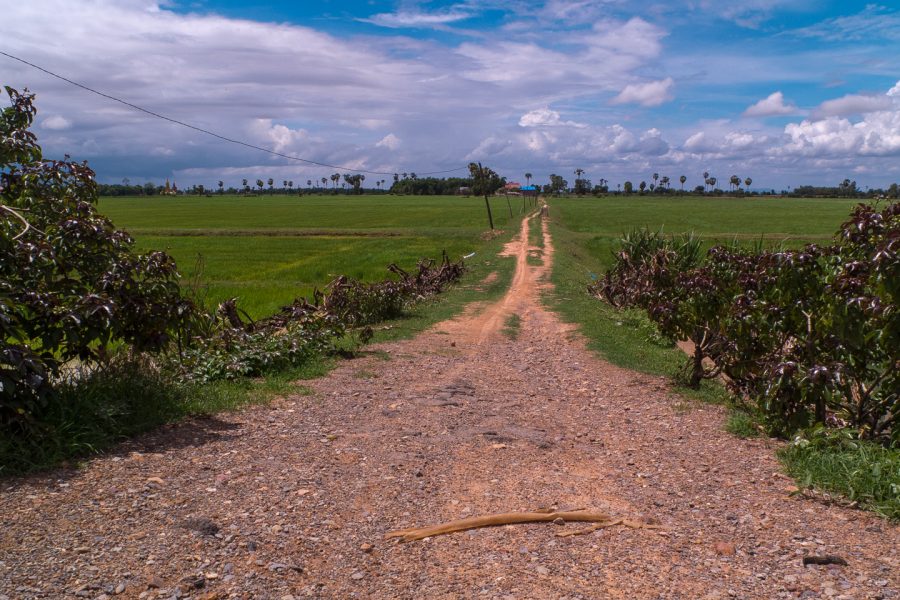 I wish Siem Reap would be this way then, it looks better there :-) 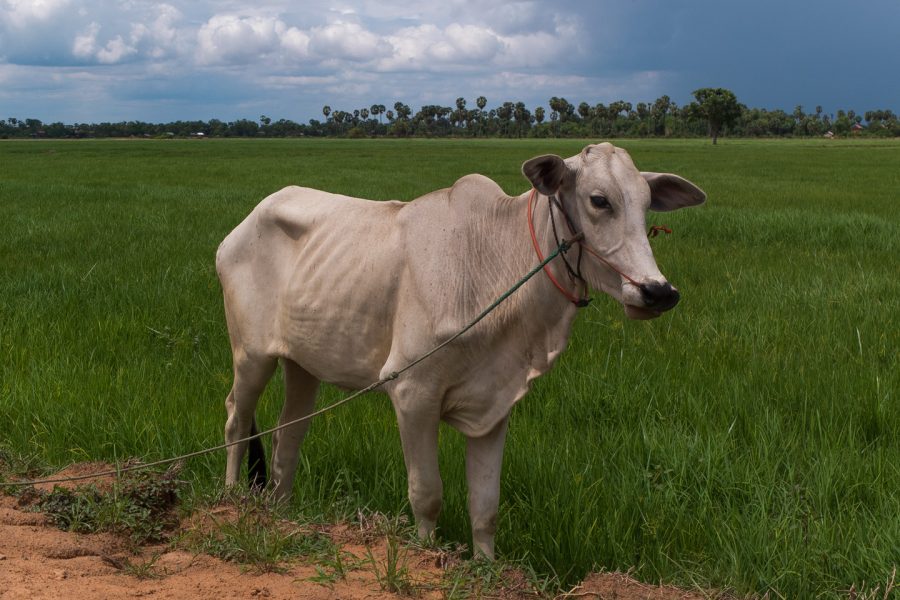 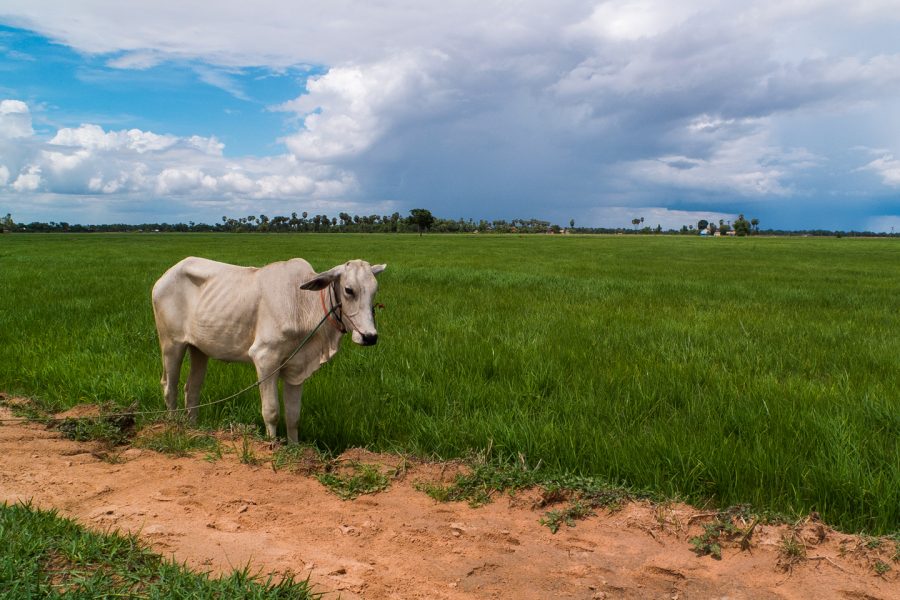 You’ve got a nice field just for you. Lucky cow. 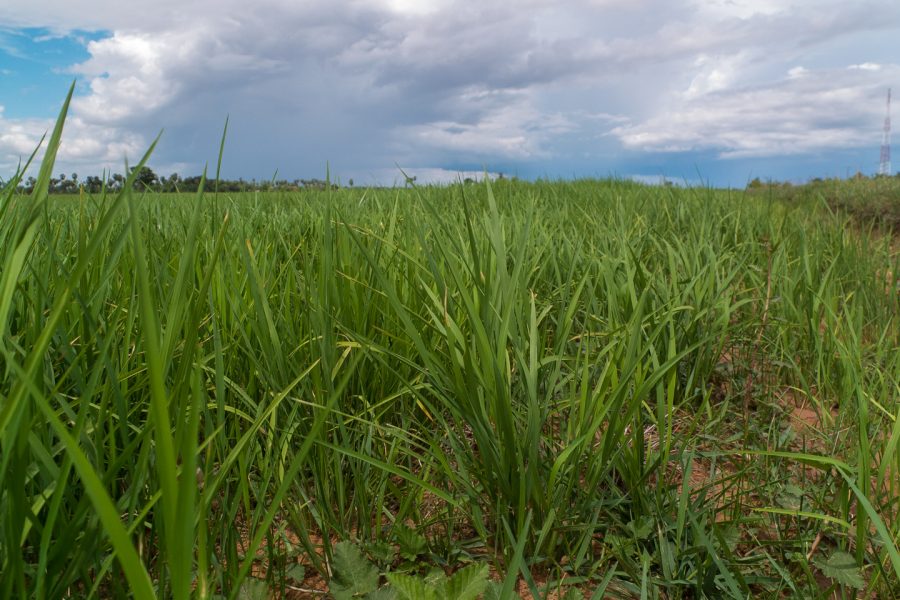 The clouds in the grass. Well, it must be rice in fact. 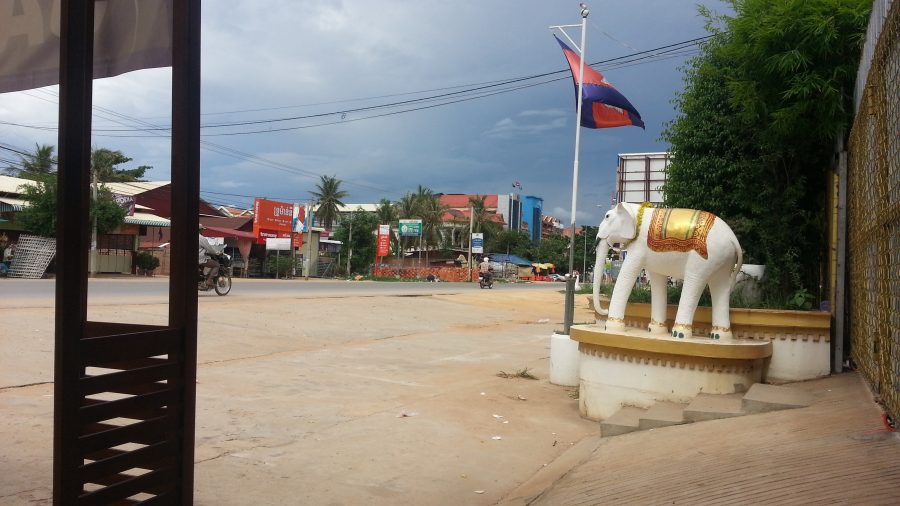 Another short break. I was just sitting here having some cookies and some water when a guy came along. His family lives here (their house is on the right side). He came to me with a nice fresh bottle of water and we had a short chat before he left. Maybe 5 minutes later. Another guys stopped here. He was on his motorbike with his son who were half asleep. We had a chat too for a little while. His english was good enough to have a conversation. He gave me a short historical lesson. He talked about the market of this city (I don’t remember the name). He said that when he was a boy, the market was in the city centre. Then, years later, the market was moved to another place on the edge of the city. Many people complain because it was far away from the centre. The old market was still there but very small. That’s only few years ago that they moved back the market where it was before. That’s curious. He describe a bit where he is living, close to the forest. He has a garden and teach his son how to take care of it so they can have “free” food. The man also told me that I should visit Battambang (but it’s not on my way for now). Those city are only 80km far from each other but their climate is very different apparently. One has a dry weather when the other one has a wet weather. If I wanted to get their I should have made my choice yesterday when I reached a fork: Siem Reap was on the left and Battambang on the right side. 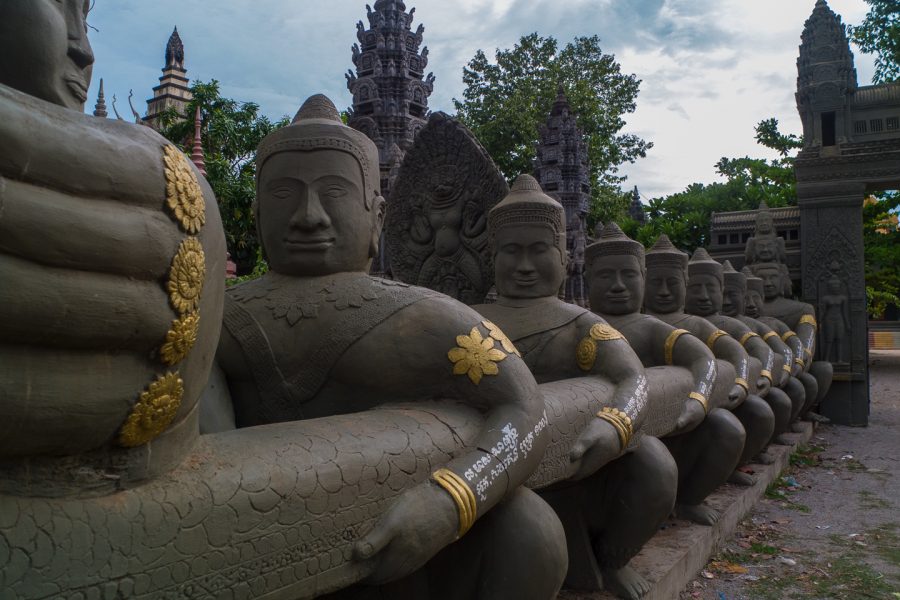 After this nice break, talking english with two people in a short period of time, I came back on the saddle. That’s the first Cambodian temple I come across. Let’s have a short look. It’s looks new. 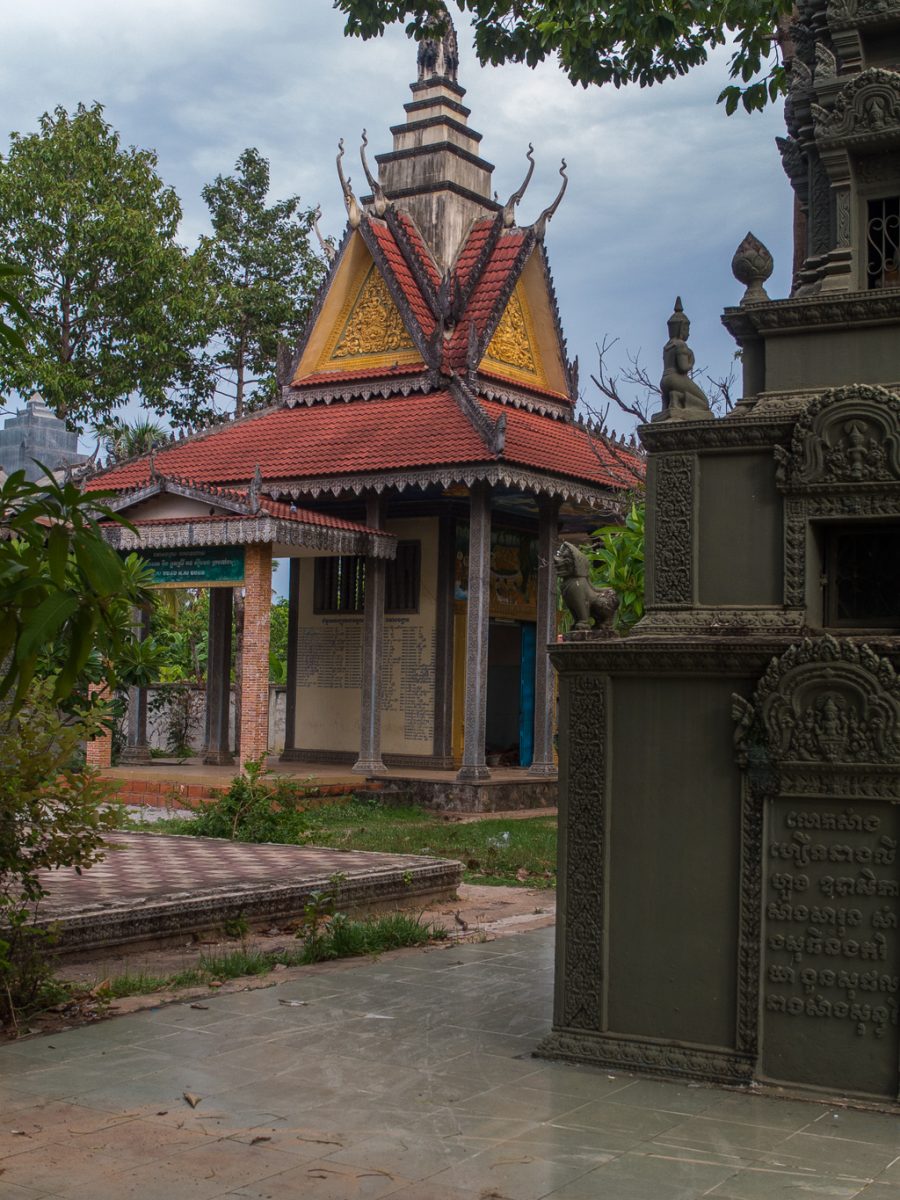 There is some old building and new ones I guess. 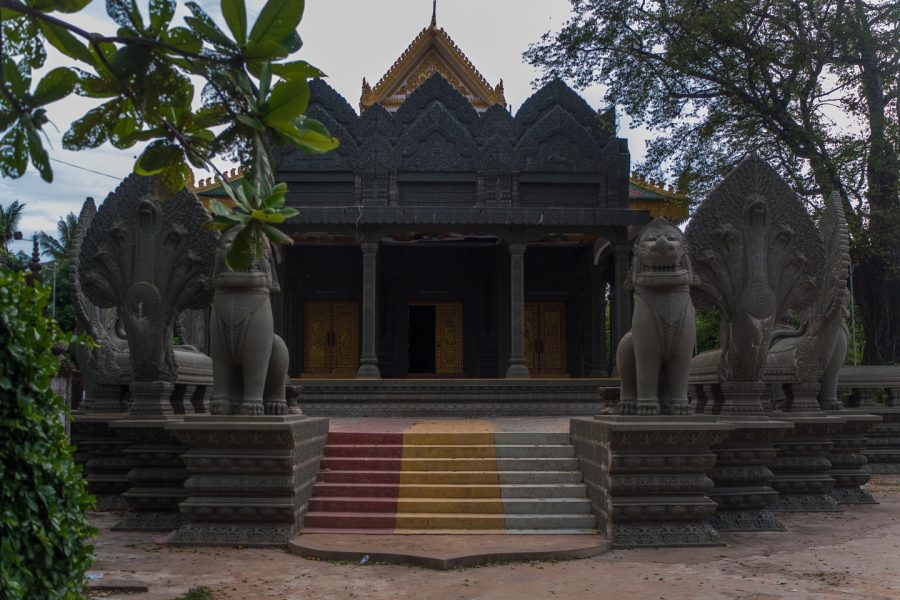 They must do some renovation here. 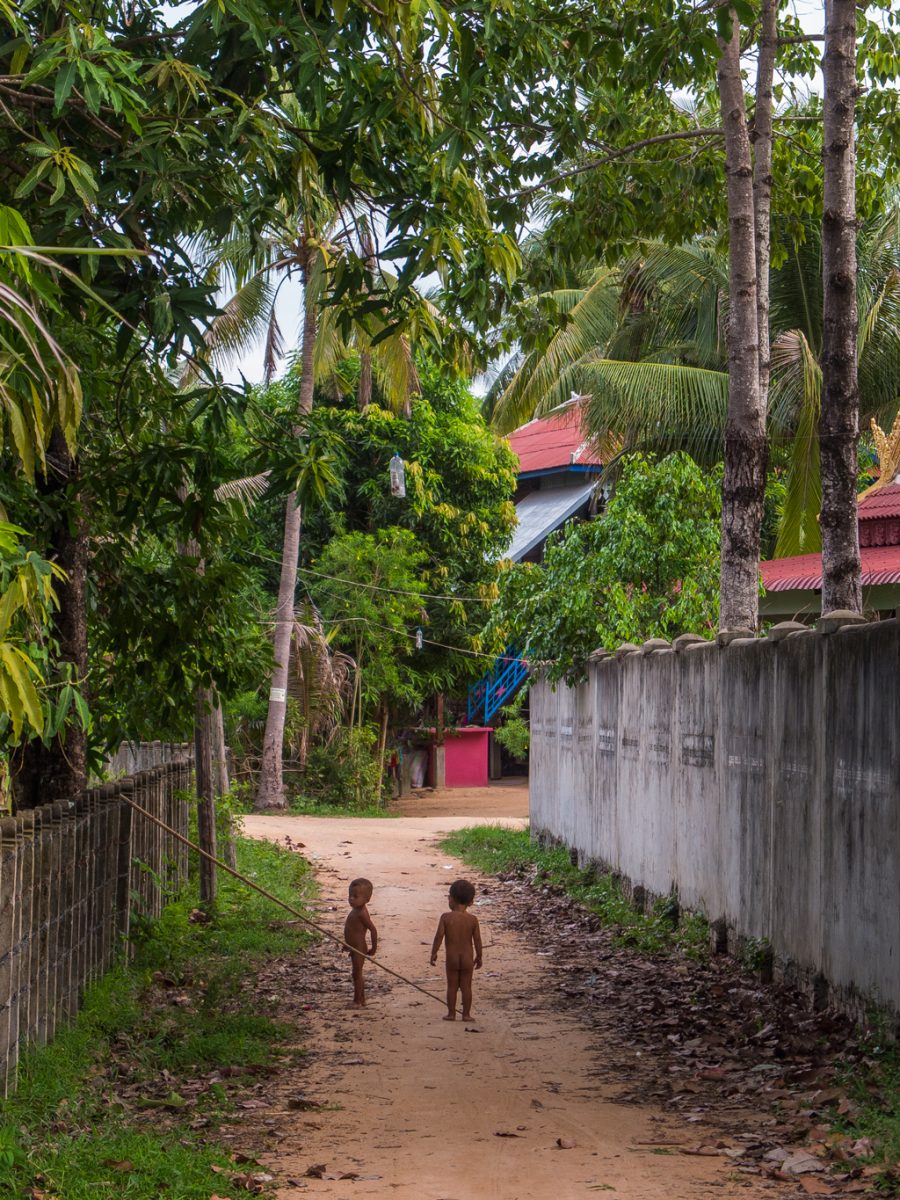 That’s what I call Freedom! Do what ever you want kids, nobody’s watching you (except my camera :-). 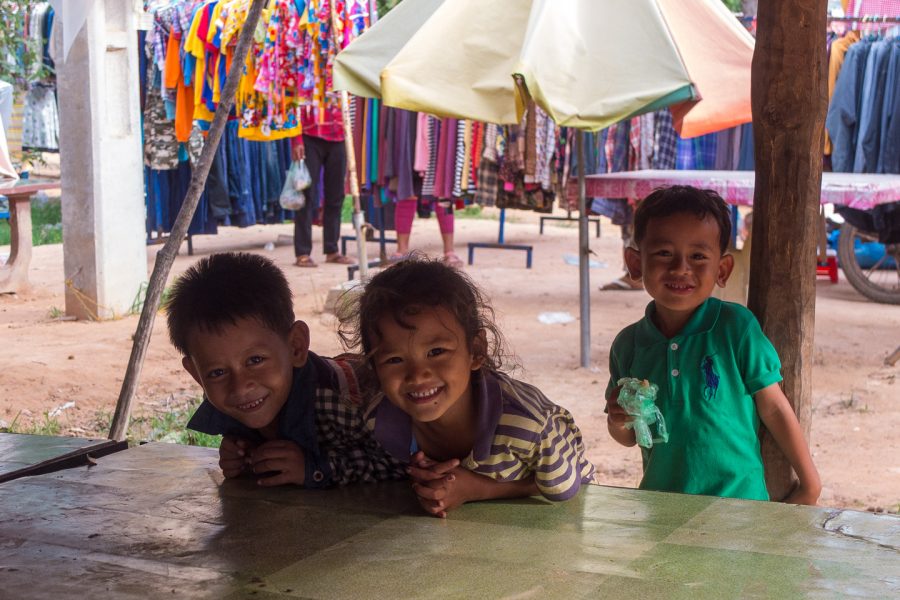 A little while later, I stopped in a local place to find some food. Few kids came around and ask me for a picture. No problem :-) 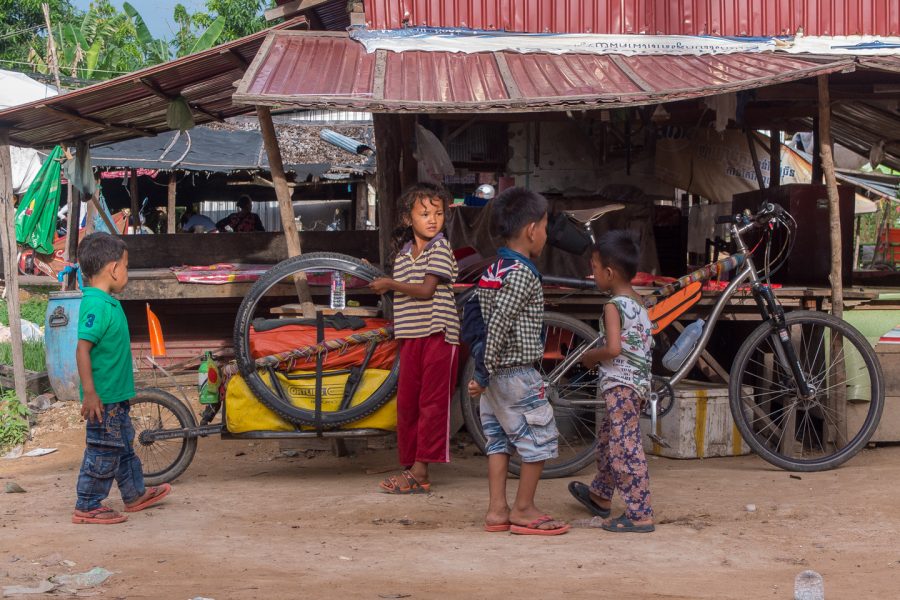 As always, I sit the way that I can keep staring at my bike, just in case. I’m absolutely not worrying here but I want to make sure they don’t push it on way or another, just to play. The kids are observing every single piece. I don’t know why but the piece that get the most attraction is always the mountain bike tires. In every countries, I’ve seen bicycles with this kind of tires but people keep touching them, look at them like they never seen something like this before. That’s curious to me. 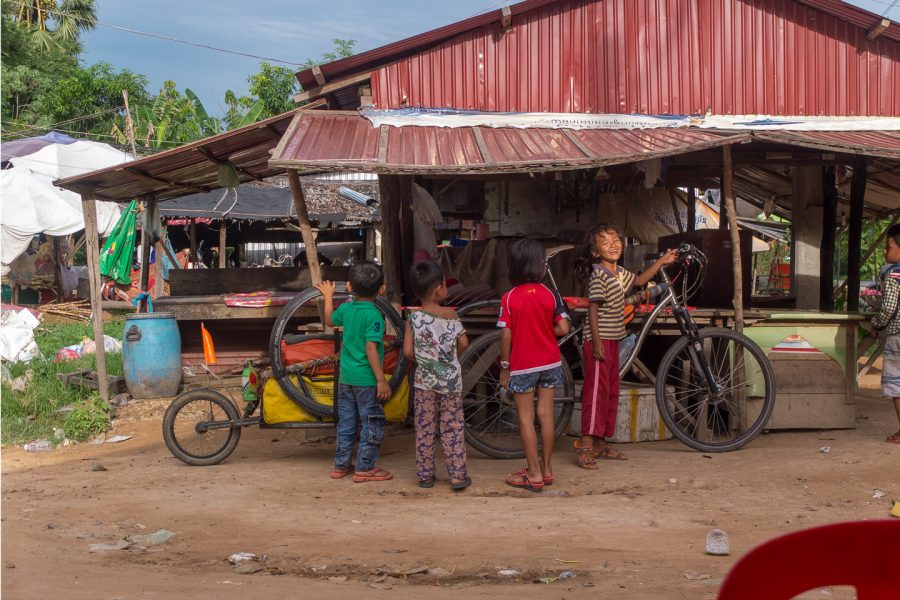 The one on the right side loves the sound of the bell :-) Diiiiiinnnnng! 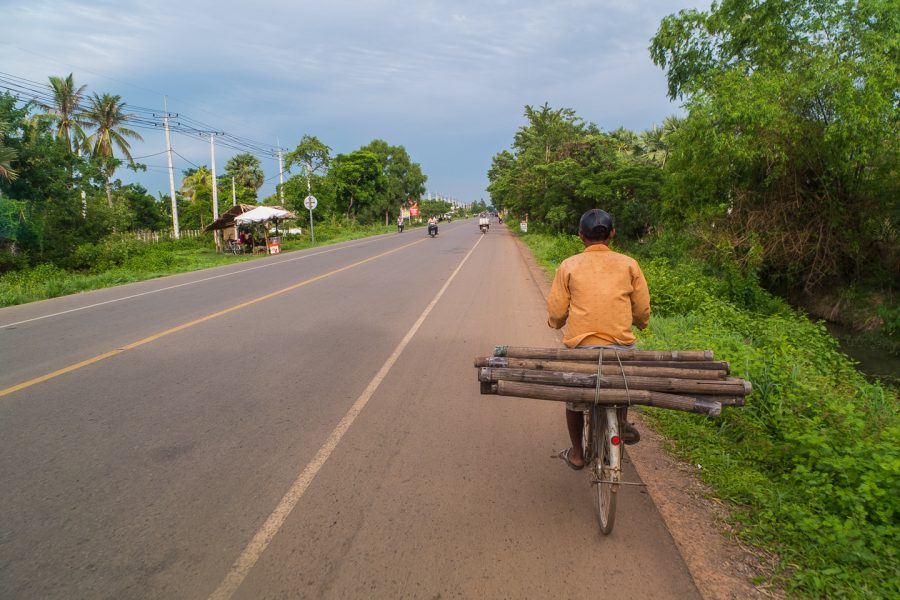 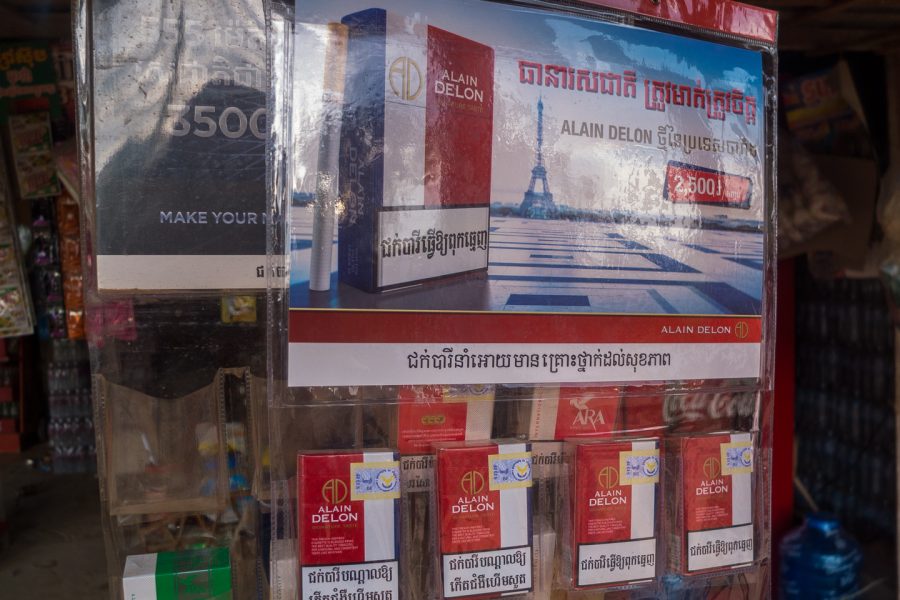 As I was looking for a sweat dessert I came across this: Uh! What?! I did not know Alain Delon had his own brand of cigarettes.
2500Riel for one packet = 0.82USD or 0.55€, so cheap to kill yourself. 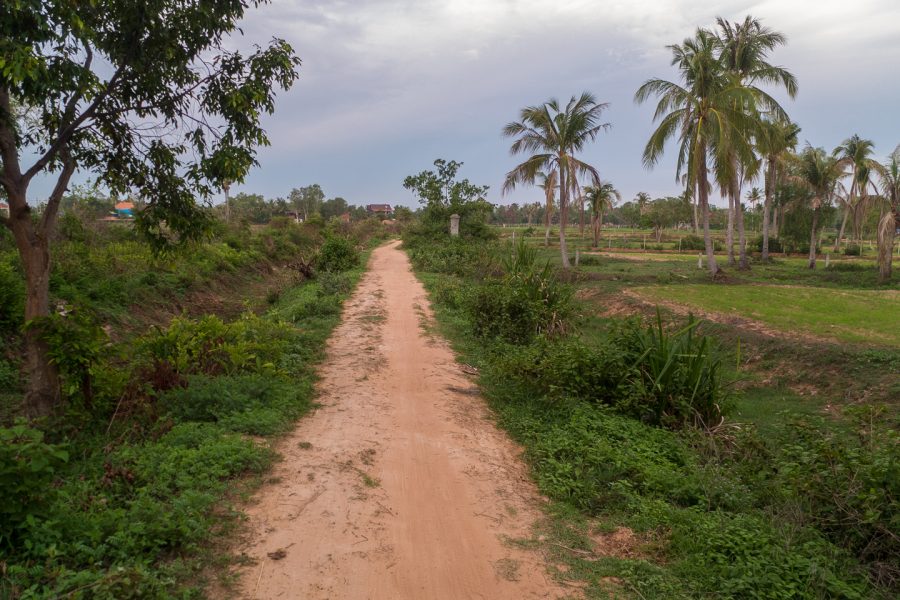 I’m getting closer to the city but found a way around. Much better here :-) 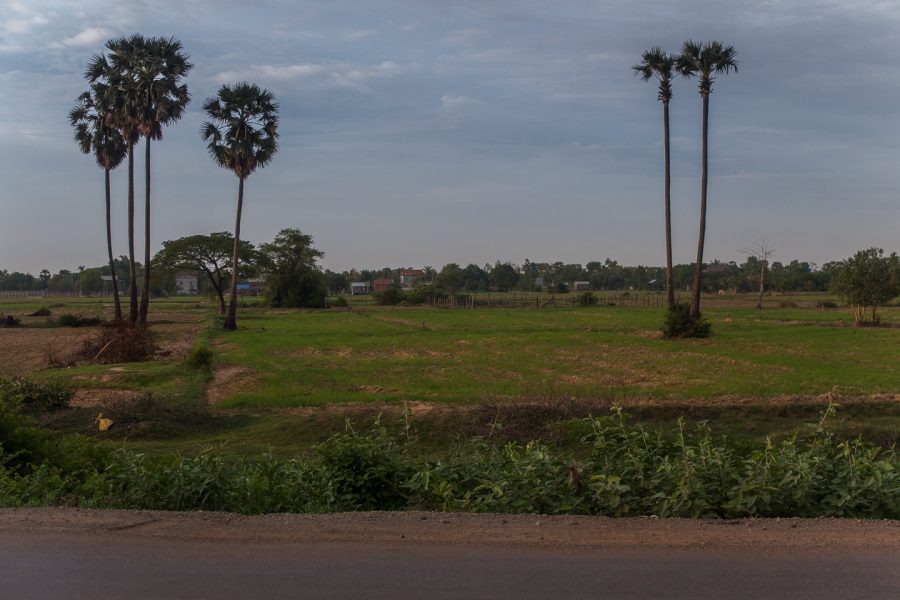 I’m now looking for a place where to sleep tonight. Once that done, I will get some food again. 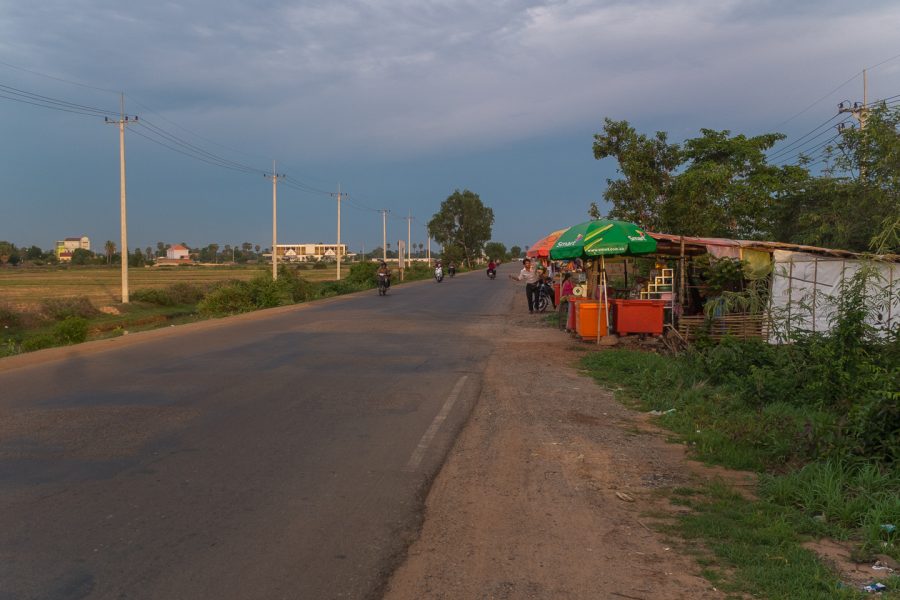 Not very easy to find a spot around here. 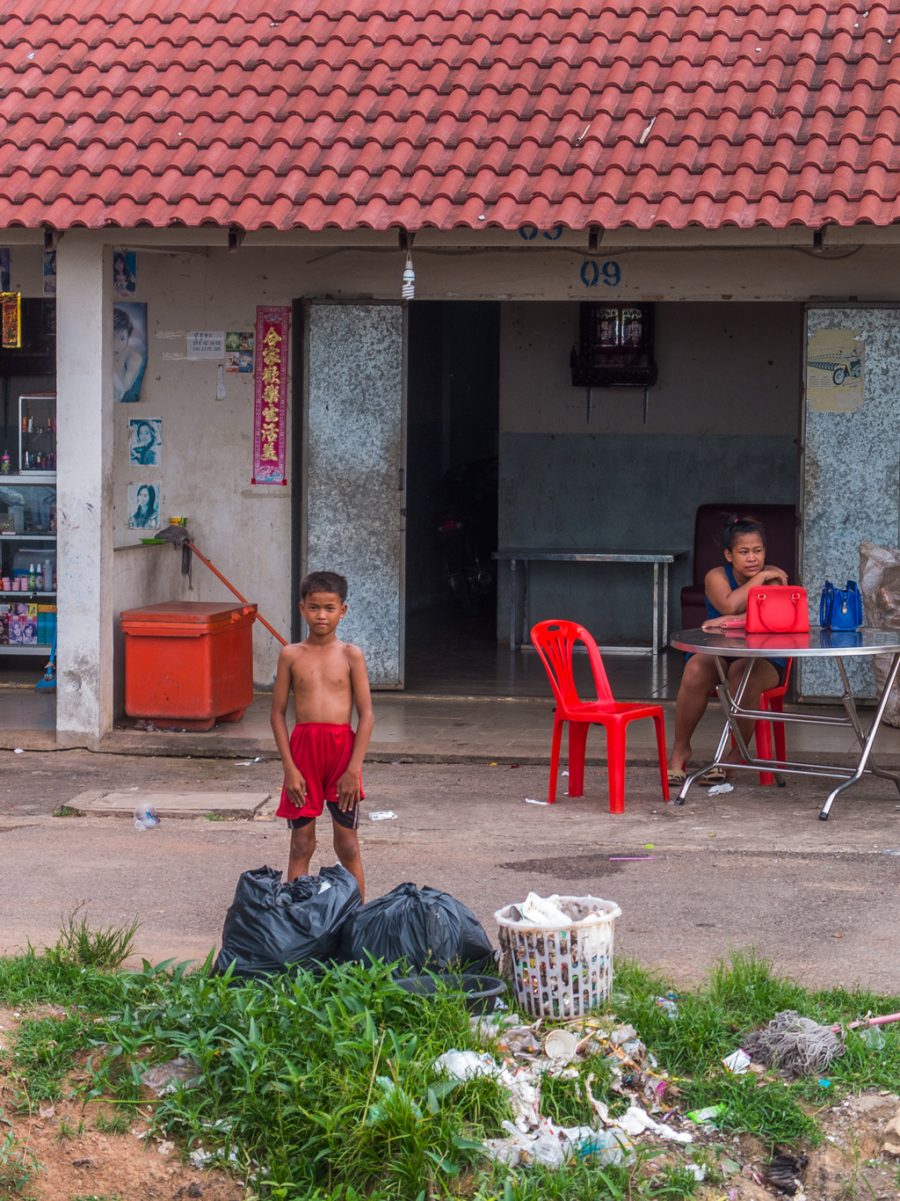 On the other side of the ditch, when that kid saw me taking the previous picture, he was gesticulating on my side. I knew what he was looking for :-). Last time people behave like this I was cycling across Indonesia. Once he gots in the box, I moved a bit further so he could join me and see how he looks like :-) 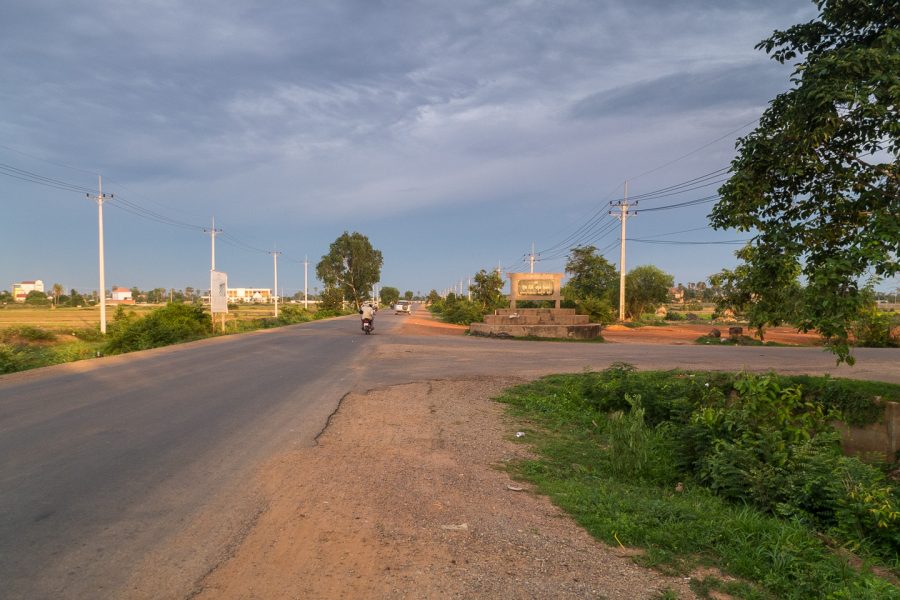 Ok, let’s turn right first to see if there is nothing interesting. If not, I will come back and stay straight on this road.

Finally I’ve found a nice spot not far away from the crossroad. There is just two trees with the perfect length between them. 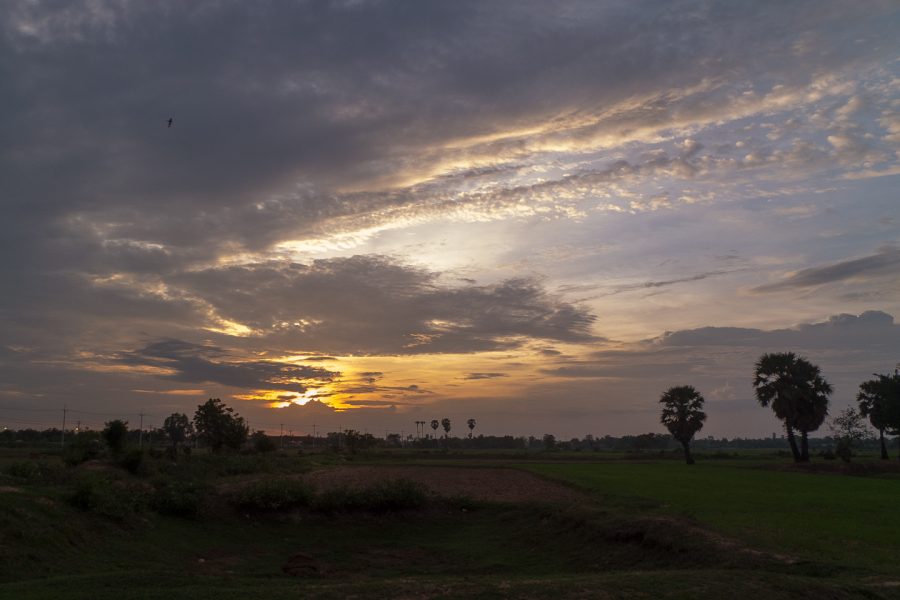 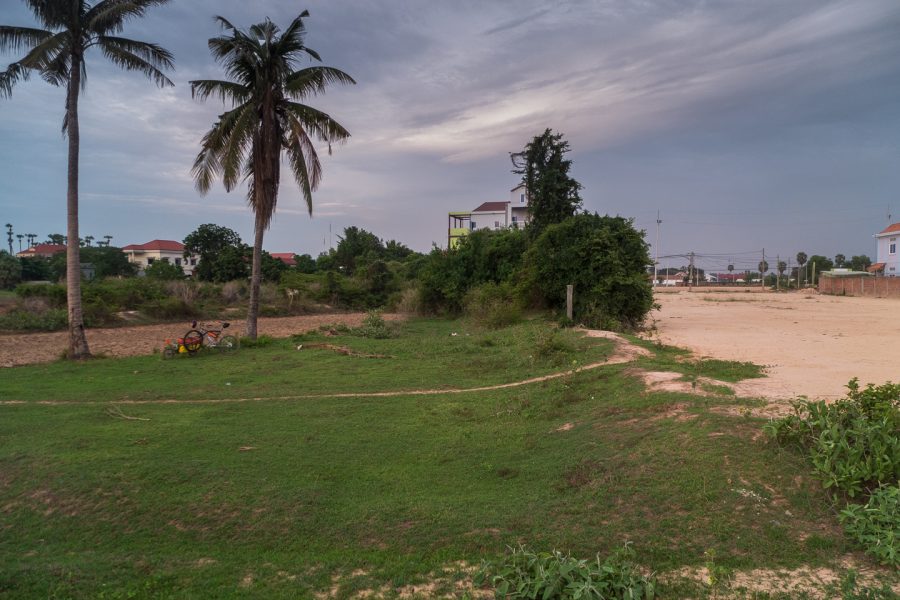 So let’s do set up the camp, have a shower and sleep. I’m lazy to cook but I still have some dry stuff I can eat tonight.

During the time I was setting up my camp, someone came around with a torch. A lot of People in Cambodia seams to speak a basic english which is easier than in Thailand or Laos. I explained I was going to stay here just one night. I don’t know if he got it but 15 minutes later, while I was just ready to take my shower, three guys came to me again. I thought I’ve found a pretty quiet spot but apparently… not really. One of them was a policeman. He said it was not safe for me to stay here tonight and I had to move to a hotel. I explain that’s not my goal, if I’m camping that’s because it’s a lot cheaper and I don’t have money for a guesthouse. Then he said “no problem, you can sleep for free. Pack your things and follow me”. Ok… I was a bit pissed off because I was just ready when they came. 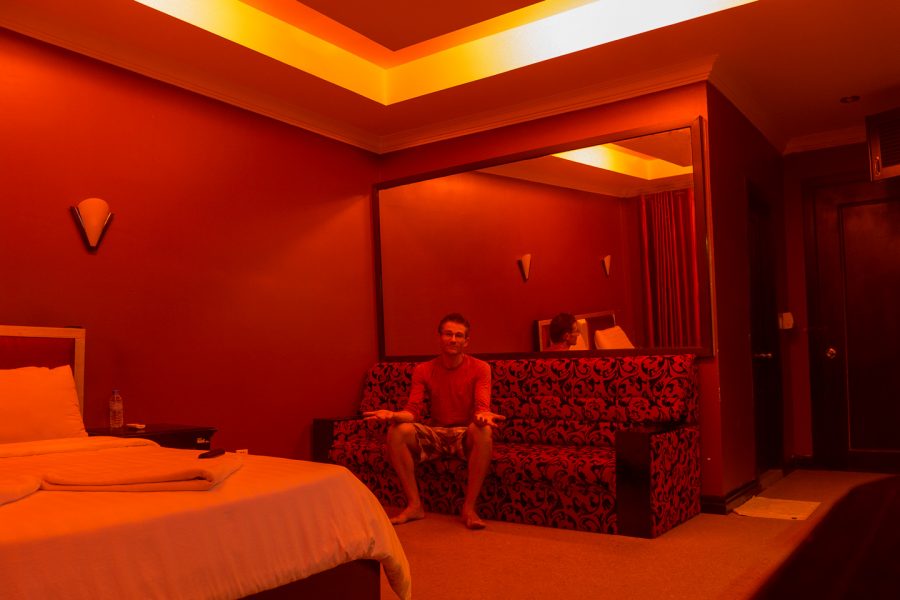 That’s where I’m going to sleep tonight finally. I did not expect that of course. I followed the policeman for few kilometres. Actually I’ve seen this place earlier this evening. The policeman talked to the guard and a minute later he gave me this room. There is a shower, a big bed that I won’t use, and even aircon. Yes, I don’t want to sleep on this bed because they will have to clean everything. It’s free so I will stay on the couch for tonight. And from tomorrow I booked a guesthouse for 4 nights. Fair enough. Second night in Cambodia :-)