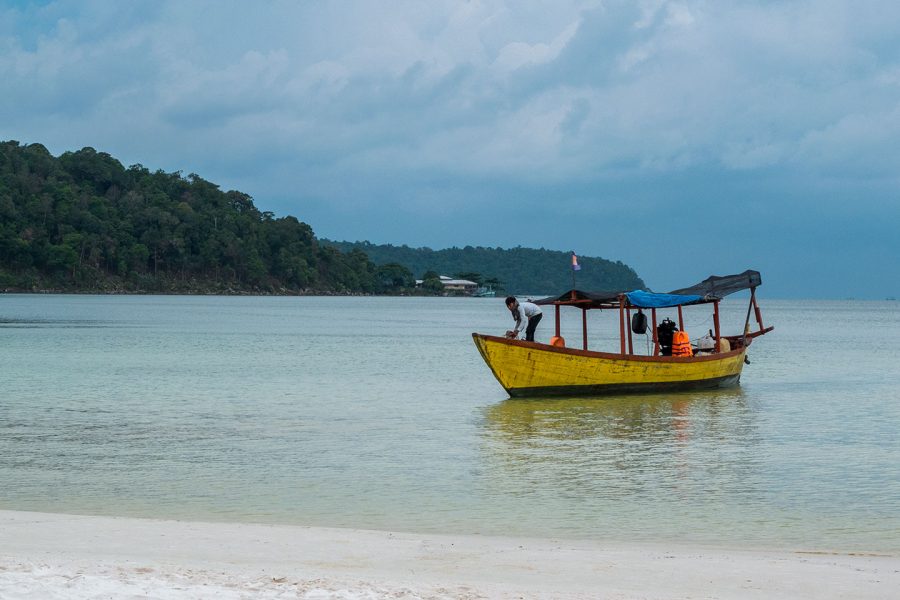 Second day in Koh Rong Samloem. This afternoon we are going on a boat tour to do some snorkeling, visit a village at the top of the island, enjoy sunset, have dinner at a local place and finally see fluorescent plankton (which I don’t have any pictures of it because it was a way too dark and subtile). Before lunch we decided to have another walk and visit the light house of this island but unfortunately we didn’t have the time to finish the track. 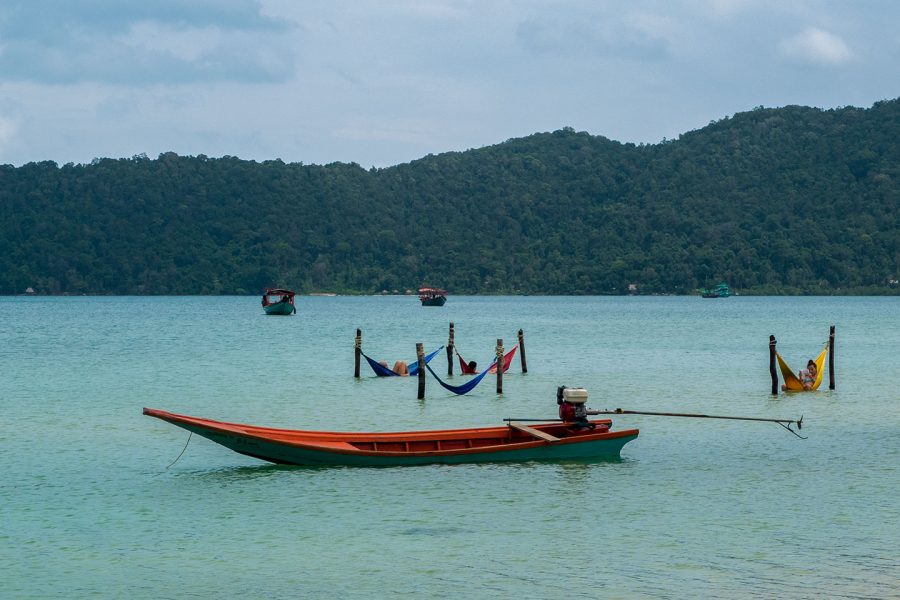 This morning, we decided to walk until the lighthouse of the island situated on the south west “corner”. So, here we are walking along the beach first. Along the way, some hotel had some simple nice idea: those people are sitting in their hammock, in the water, reading or doing whatever. It must feels cold after a while. 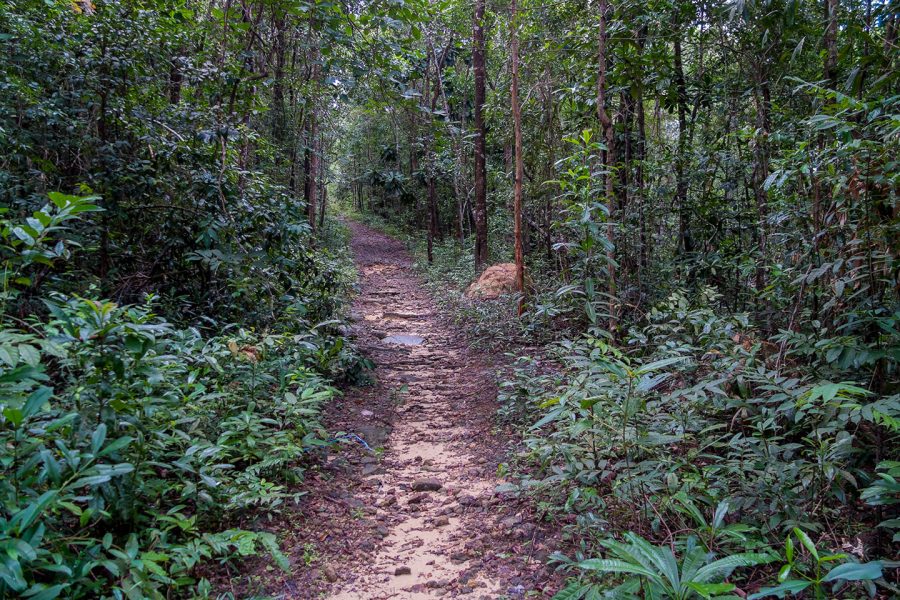 About 30 minutes later we reached the track which goes through a forest towards the other side of the island. The slope is very gentle and the track in good shape most of the time. 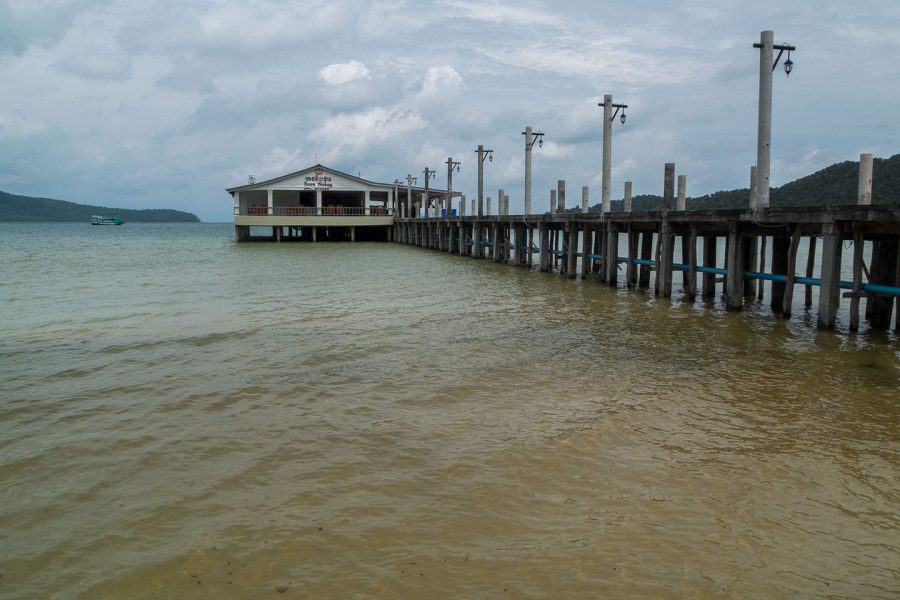 And nope, this is not the other side… As we were walking we realised we didn’t have enough time to do the whole visit so unfortunately, we had to turn around, come back to the hotel to have lunch and be ready when the boat would pick us up. 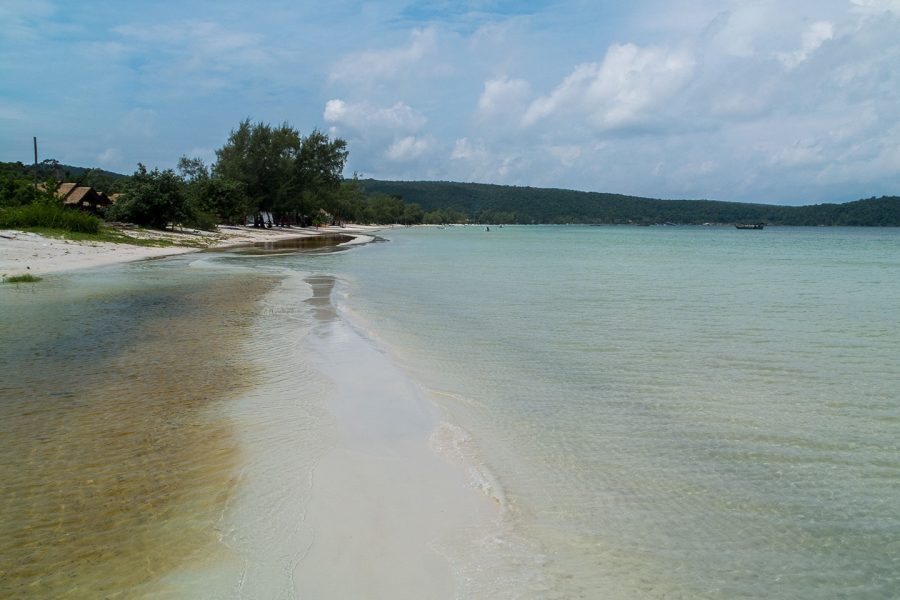 So we are now walking back along the beach. 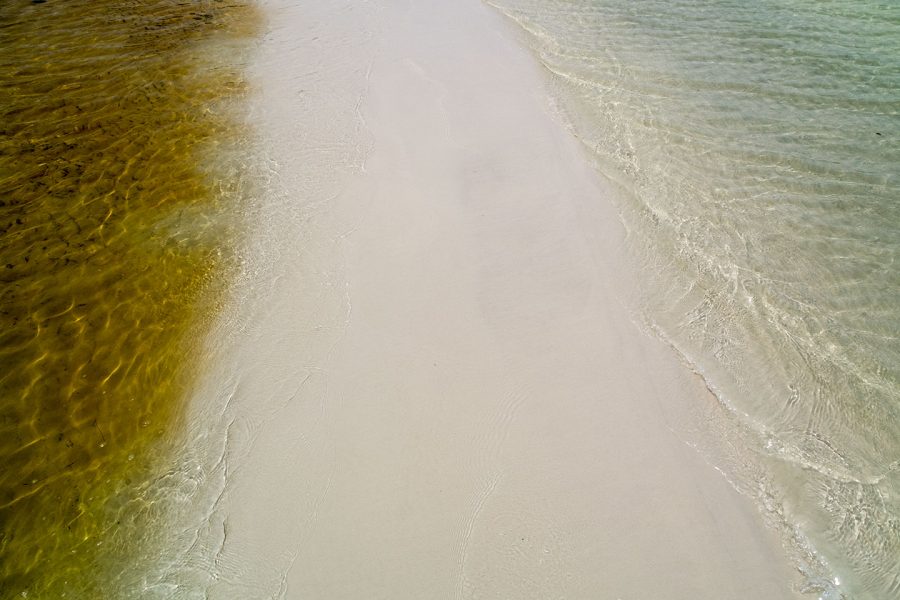 Look at the colour of this water, brown on one side, transparent on the other. The left side is not like this because of pollution but because of the leaves, well I hope so.

Is it our boat? Nope but it’s going to be similar for sure. 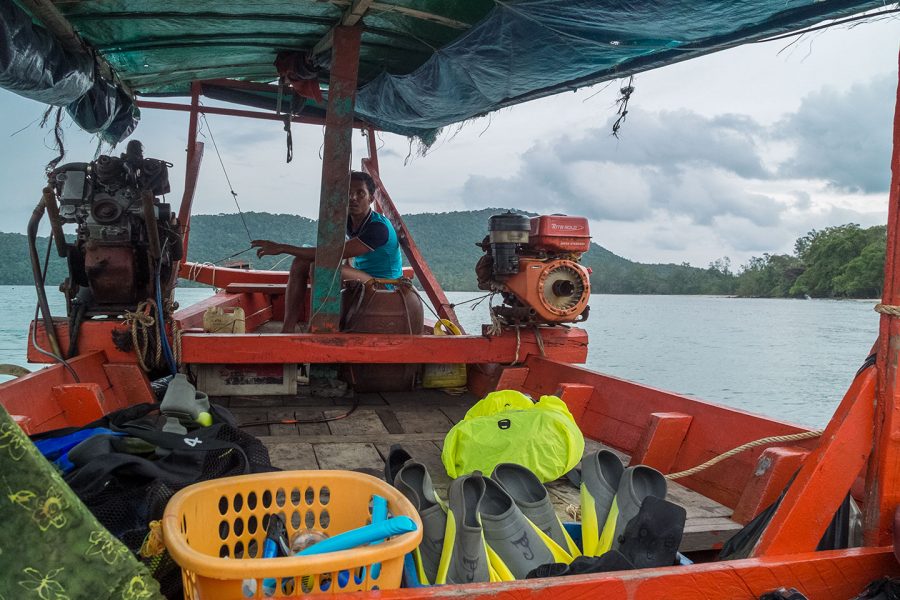 Finally we are on board. The snorkeling material is ready, there is some fresh drinks too. I’m not going to have any underwater pictures today because I completely forgot my gopro (as usual).

The snorkeling was not too bad but far to be better than Mabul island in Borneo. The weather was covered too and the water was not super clear. Still we could see some flashy fish and green coral but the general experience was like a green, grey and quiet underwater world. Like I said, not too bad but far to be like pictures you can find online. I wish I had the gopro to show you what I mean… 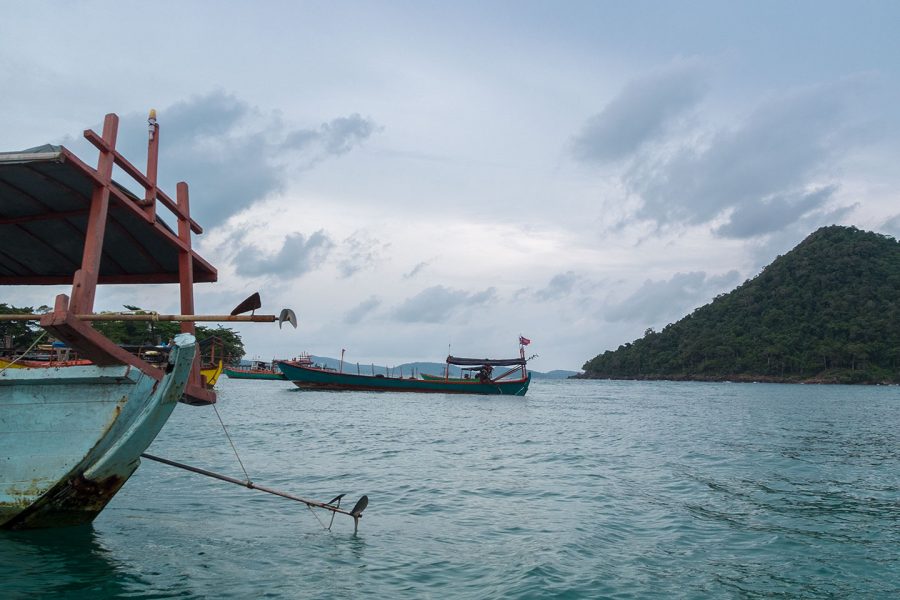 Few minutes after the snorkeling we reached our next destination. 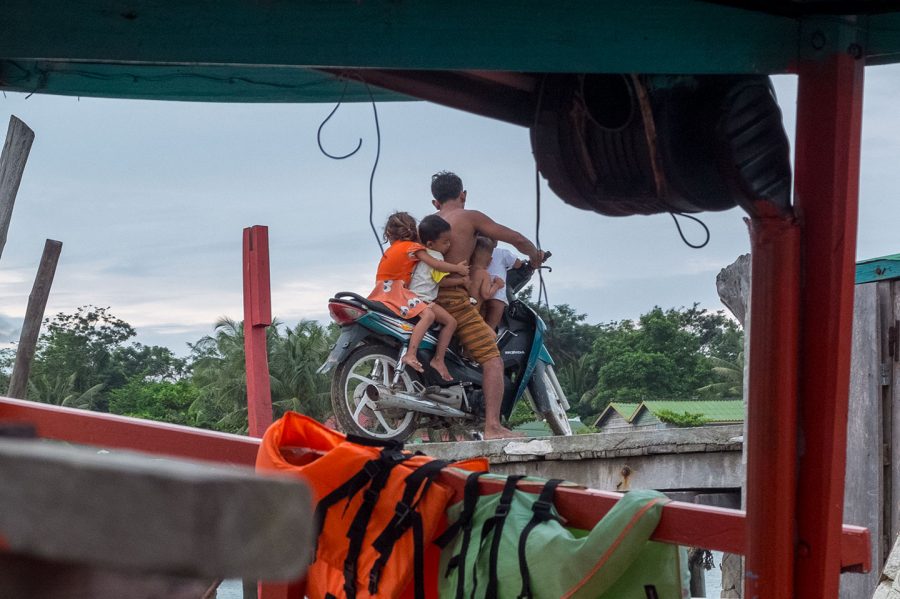 Only five people on one scooter! Come on, you can do better, there is a lot of space behind that little girl :-) They could be seven I’m sure! :-) 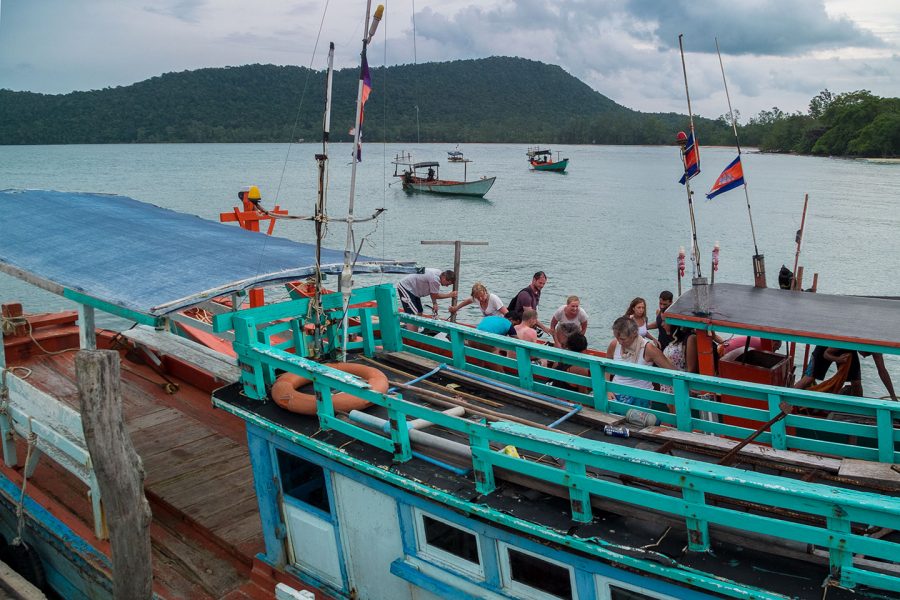 Time to disembark. We are not against the pier so we have to hop on two other boats first. 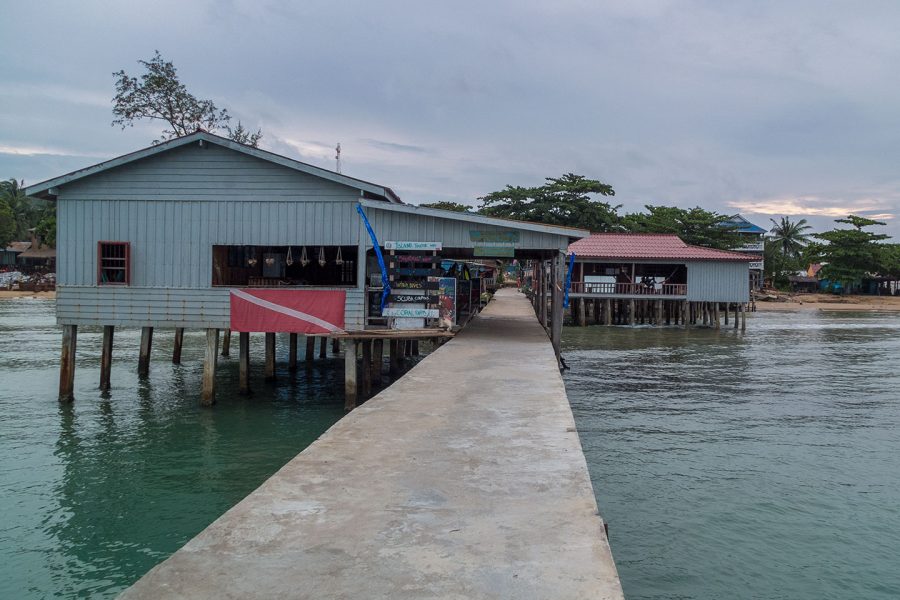 We are going to do a visit around the village. 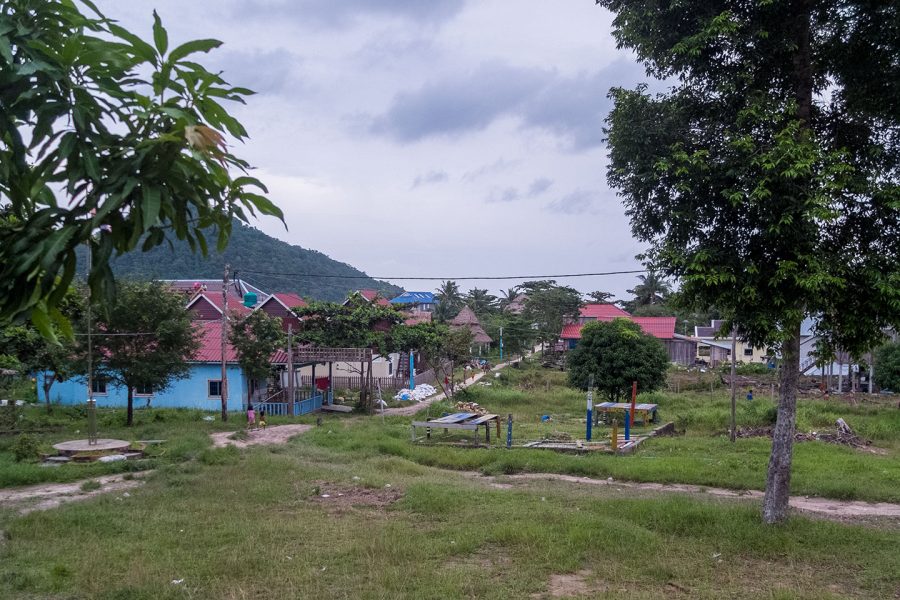 I didn’t want to take pictures inside the village so this is a general view from the back of it. We are now in an association’s school built by Italian people (if I remember well). They help the children of this community, teaching them english and other stuff (I hope). They should also teach them how to clean their own place because there is rubbish just everywhere. As far as 2012, this place had just few houses and people didn’t know much about the “modern” world. In less than 4 years, a lot of families came here to live. Today, there is many backpackers hostels and the village expect to make money with tourism. I don’t know why, I feel it’s not the best idea… It could be the perfect place to create a community who doesn’t use money, where people work with each other, where every house is build with local material and have their own organic garden. They could be so much more happier this way but no, people want to be part of the system, they want to feel poor, they want to complain, they want to buy unnecessary stuff. Bah! This is so much waste…

I’m really looking into this kind of alternative lifestyle these days (self efficient communities, mud houses, bamboo houses, no money, vegetarian and vegan food) and I really think that the “poor” countries as the world tagged them (and even themselves), are the one who could shine so easily. They don’t have all the rules, not yet, that stop people to do what they want. They have a lot more freedom compare to “modern” countries. Unfortunately, people just want to reach the same lifestyle of rich countries and they don’t know yet the huge mistake they are doing. 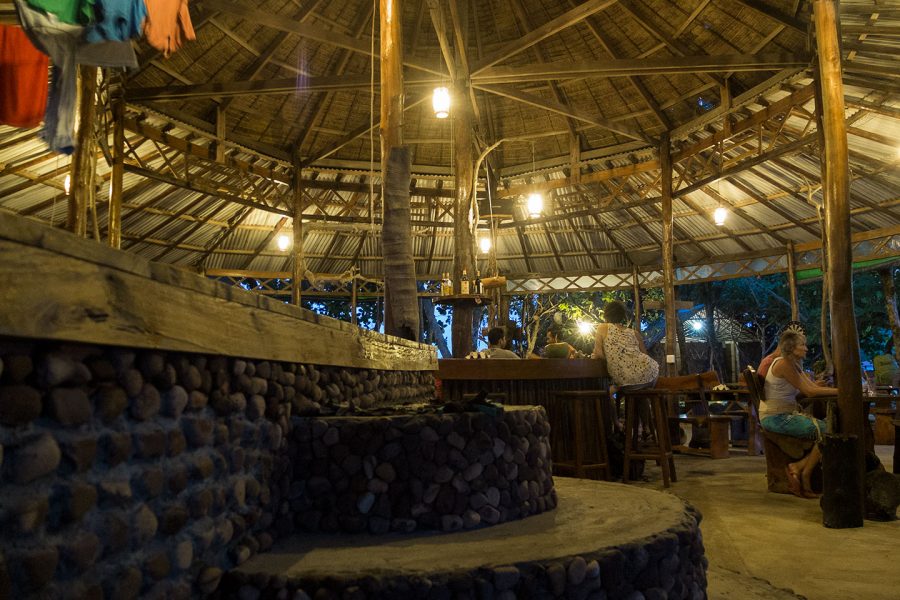 Anyway, after this short visit of the village, the guide brought us to this place called “sunset bar” or something like this. And you know why? 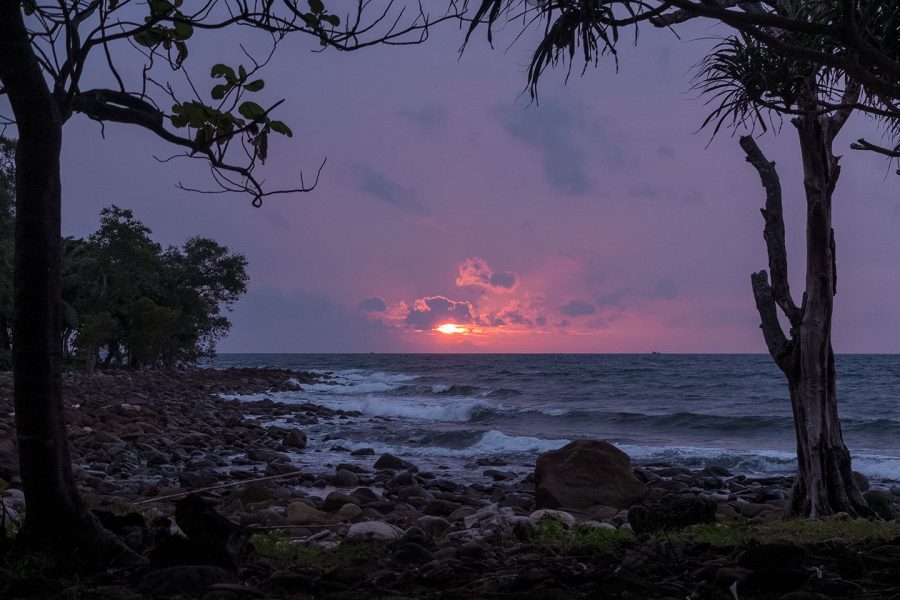 That’s the reason why. I’ve seen a lot better though. 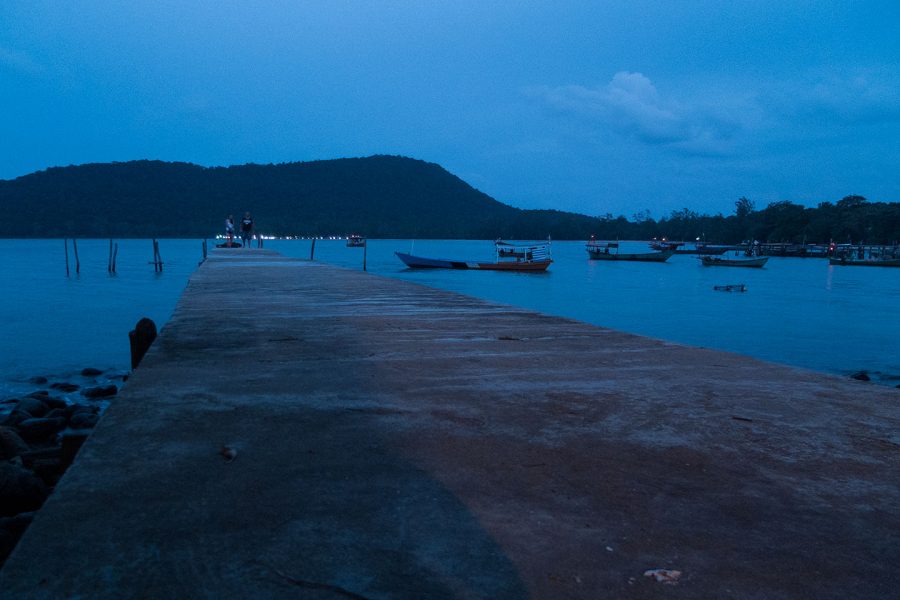 View towards another pier and the port on the right hand side. 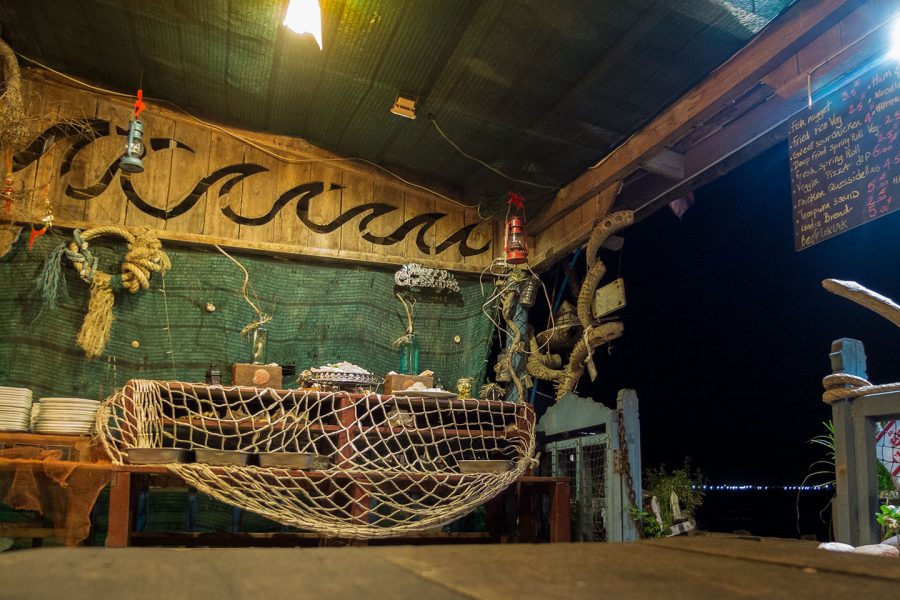 Finally we came back to the first pier where a restaurant welcomed us. The food was almost ready. The people of this place cooked a lot of delicious food (not necessary local food). Everything is vegetarian and delicious! The rest of the food will be given to the poor people, as they said. That’s it for today, at least in pictures.

Later on after dinner, we came back on board and, using just a flashlight, the driver brought us to the plankton place where we could swim in it. At night, in the dark, the plankton is easily noticeable (especially when you “shake” the water) but most of the cameras are not sensitive enough to capture the delicate light in movement. It was an interesting experience and I hope tourism doesn’t destroy their habitat.