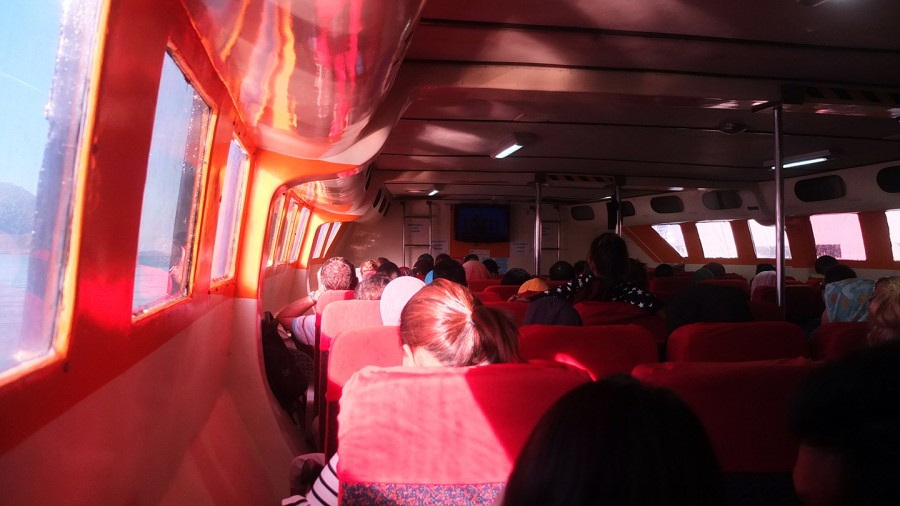 Here we go, this is our last day in Malaysia as we are heading towards Thailand by boat. We could have crossed the border by the road but it’s nice to take travel by sea sometimes. Once in Thailand, an hour and twenty minutes later, we had to cycle to the next town to get organised with money and phone number plus internet. We found easily the bank and then a shopping mall for the SIM card. Finally, we’ve just stayed in that same shopping mall and worked on our website until dark. Then we cycled few kilometres and stopped in a park where we spent our night. 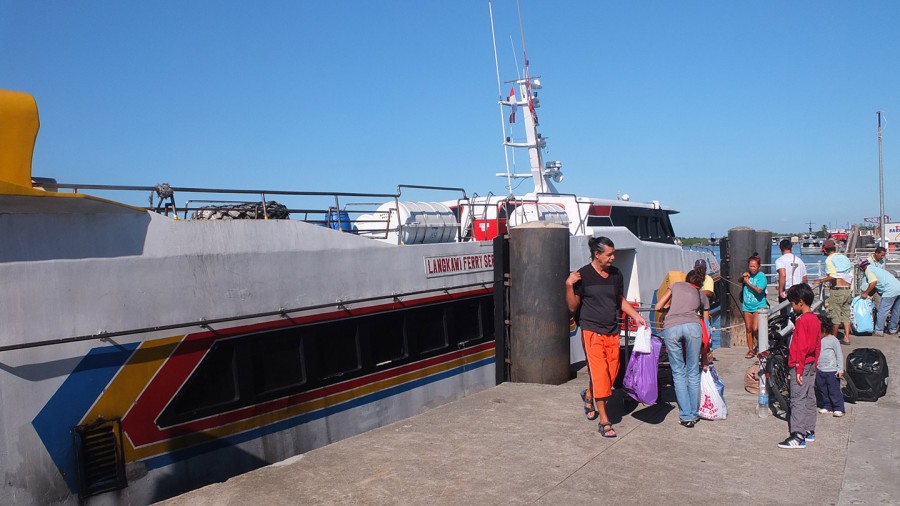 Here we are in Thailand! 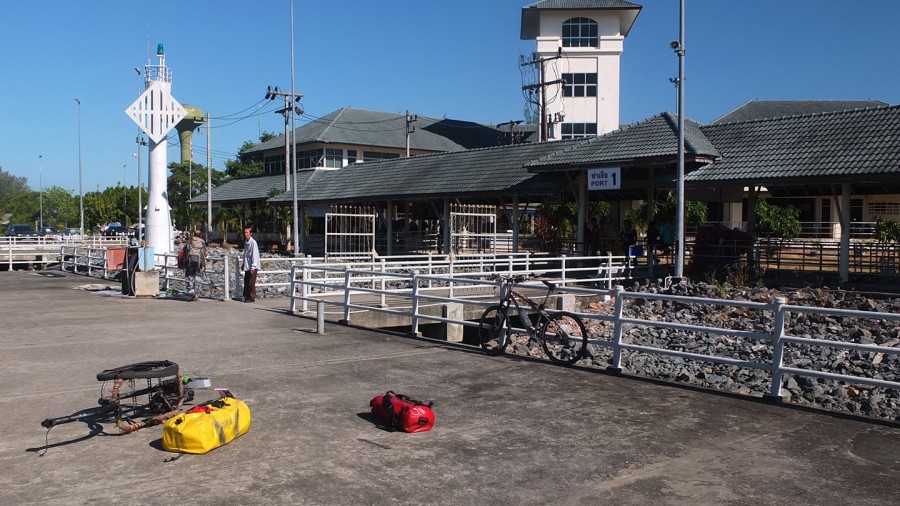 We were the last one to come out. My bicycle and trailer are waiting for me :-) 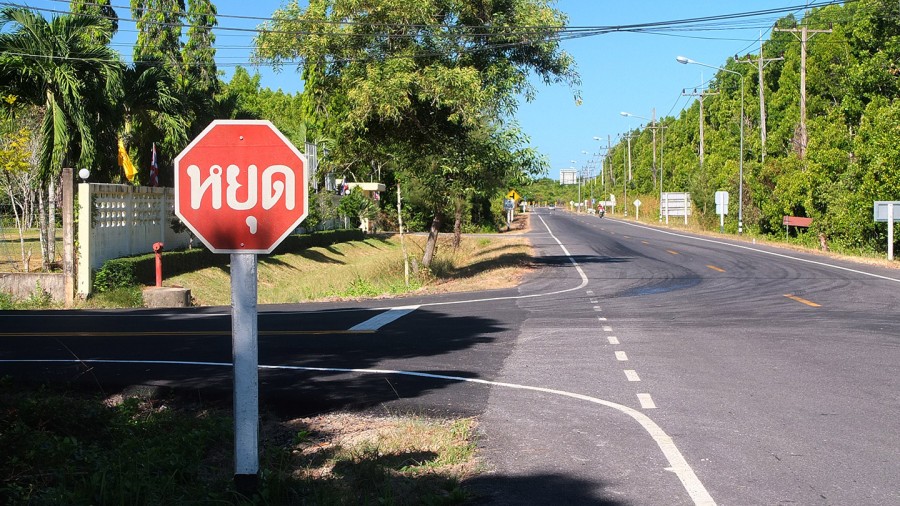 On the road again towards Satun. Satun is a region and a town. Is there something wrong here? I guess this sign says STOP but its position is weird. We are on the main road. The road on the left side has a white stop line on the ground but we have a stop sign… Something I don’t get here… Should I stop? 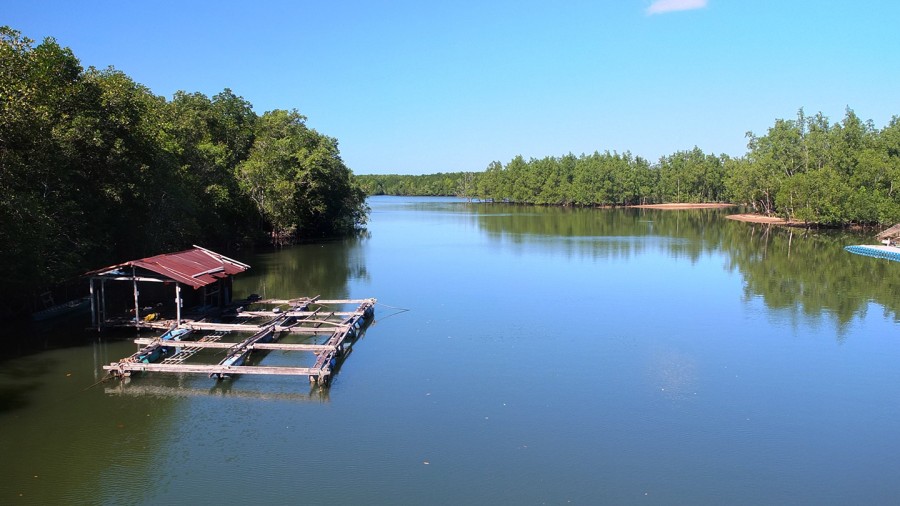 The first river in Thailand :-) Everything is new. Everything deserve a picture :-) Well, I know this looks like any river but hey! this is Thailand! 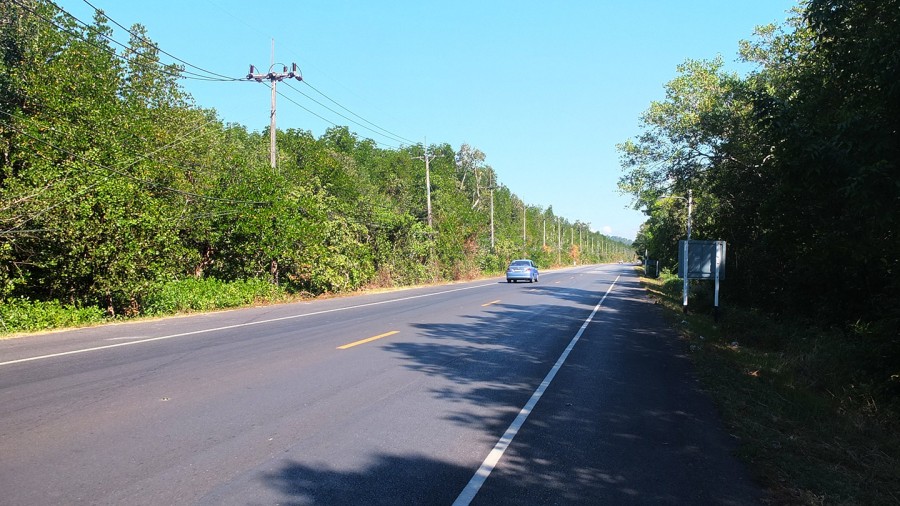 It’s flat, straight and super hot, few! Better riding on the right side to avoid the heat. 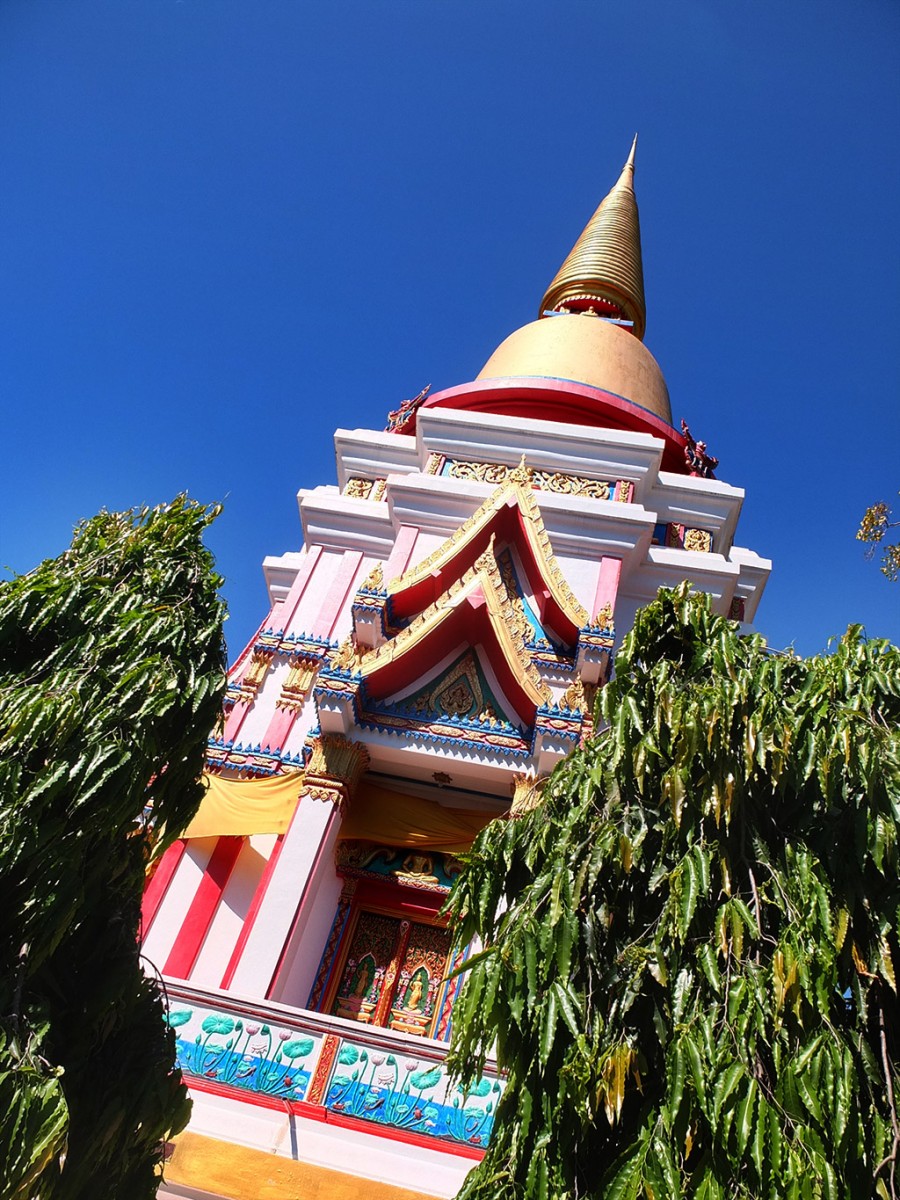 Here we are in Satun city. That’s the first temple Thai I’ve seen here. Some more, much more are coming :-) 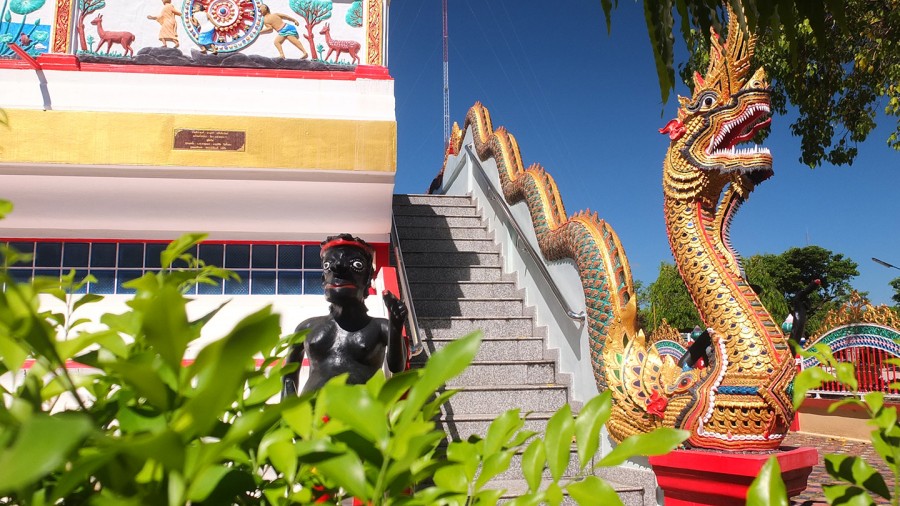 What is this guy pointing his finger next to the dragon? I must research about that. 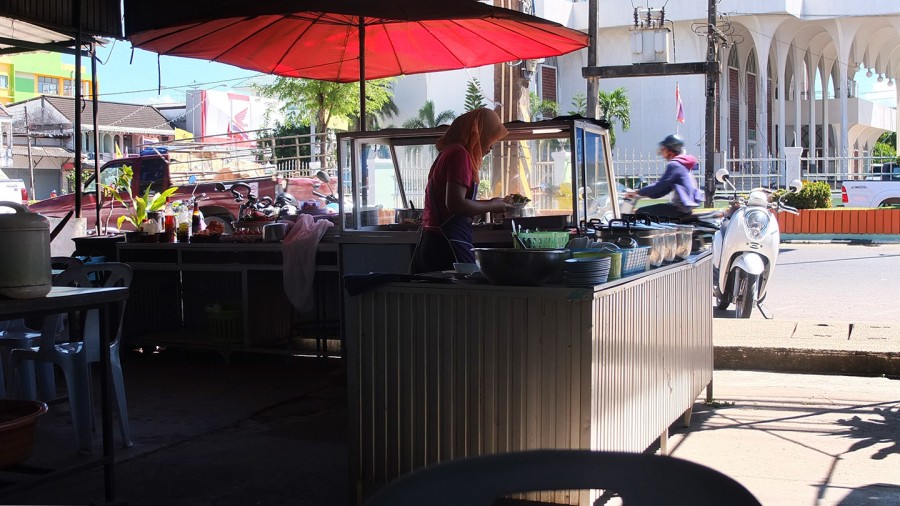 We got to the bank first to get some cash. The bank fee was 180 to 200 baht for each withdraw. I will compare later with other banks further north because it seems a lot. Well 200 baht are approximately equal to $8AUD. But still! Eight dollar fee for one withdraw… Now we are rich, let’s have something to eat, in a Malay restaurant, front of a mosque haha. 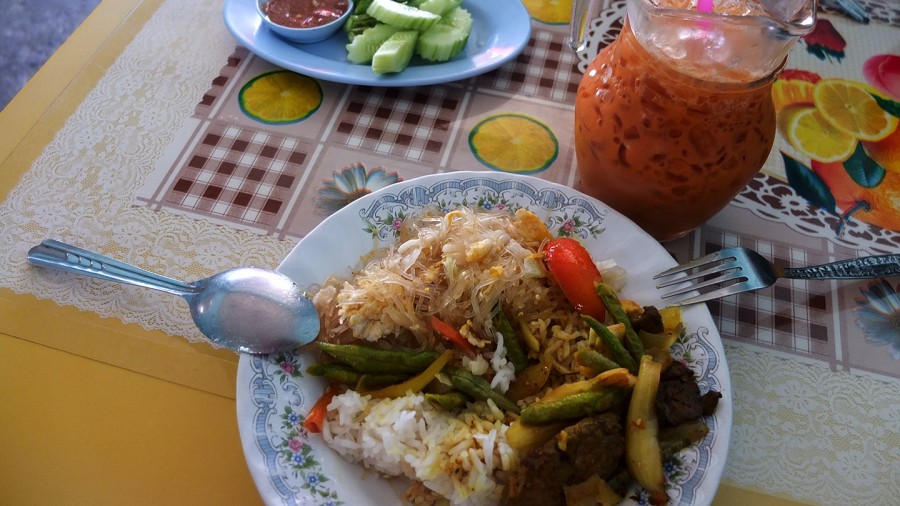 Rice, veggies, vermicelli and chicken (I think) plus a nice fresh tea. That’s good to eat :-) The big difference with Malaysia is that they provide water and ice for free. In Indonesia or south of Malaysia, they offer water but it’s warm. Better here :-) 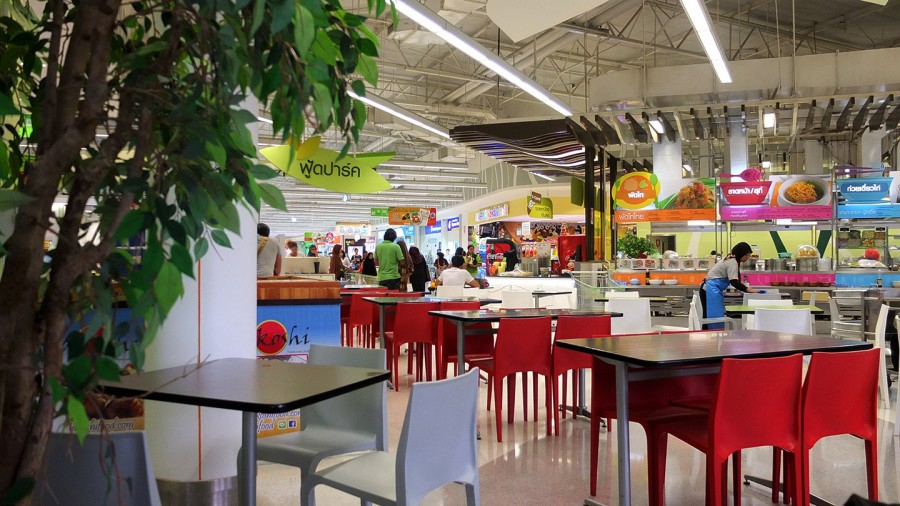 After lunch, we found that shopping mall where we first bought a new SIM card. As we had a short walk around, we discovered this open space with tables and electric plugs. The perfect spot to work on our laptop. I don’t feel I’m travelling when I’m in this kind of “internationalised” places but I’m late on this blog! Just get a drink and enjoy working.

Finally, we moved out around 7:30 and headed out of town searching a quiet spot where to sleep. At some point we met some military guy who were sitting in the middle of the road where the separation is. I don’t really know what they were doing here at this time. Checking random cars? or people? No idea. We had a chat for few minutes. No one understood each other very well but we managed to explain where we were heading. One of the guy, asked for a picture. “Smile” :-) Then another one took a picture of my passport with his phone. Heu, ok, why not.

After that, we kept going for a short distance and saw a kind of public park. Nice! Let’s set up the camp here. We realised a bit late that it was a Buddhist temple and its surroundings. The main problem we had during our research was dogs. There is many dogs here. They belongs to no one and bark all the time. Everywhere we stopped, at least 2 dogs would come and bother us. They are not aggressive, they are just scared I think. Anyway, we found our spot for the night :-) Nice!