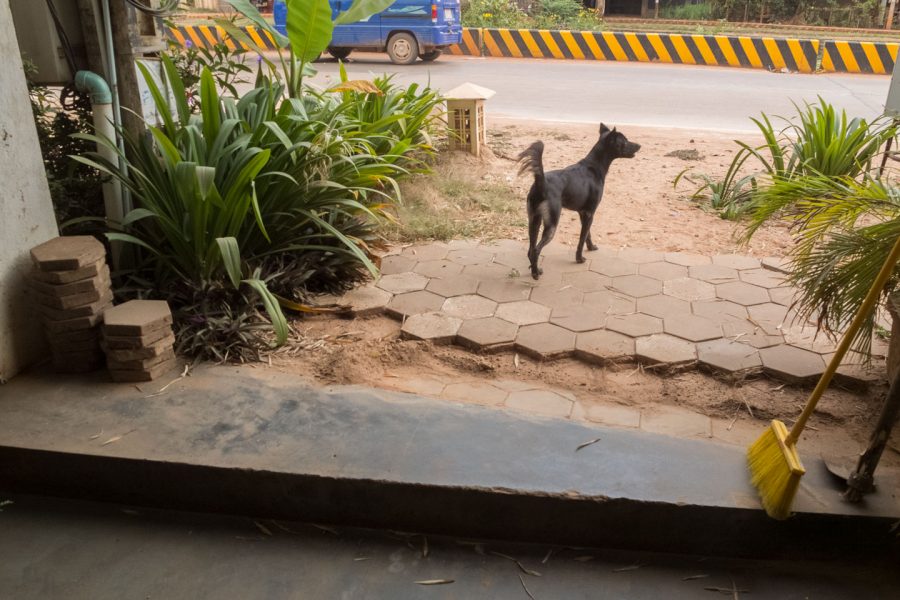 Second big project: The entrance of the hostel. Same, it took me several days to fix this area and still, it’s not finished but the difference is largely visible already. Few years ago, the city made this road again. Like in Indonesia, they build on top of the old one which created a 30cm step. Since then, the owner never adapted the floor’s entrance. Let’s fix this :-) 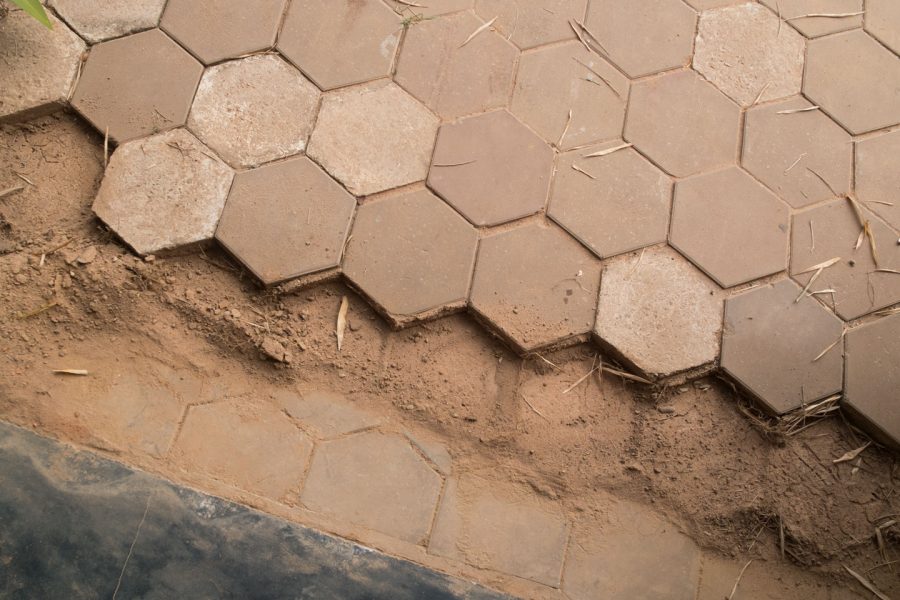 The first step is to dismount the top layer of pavements and then see how it looks underneath. 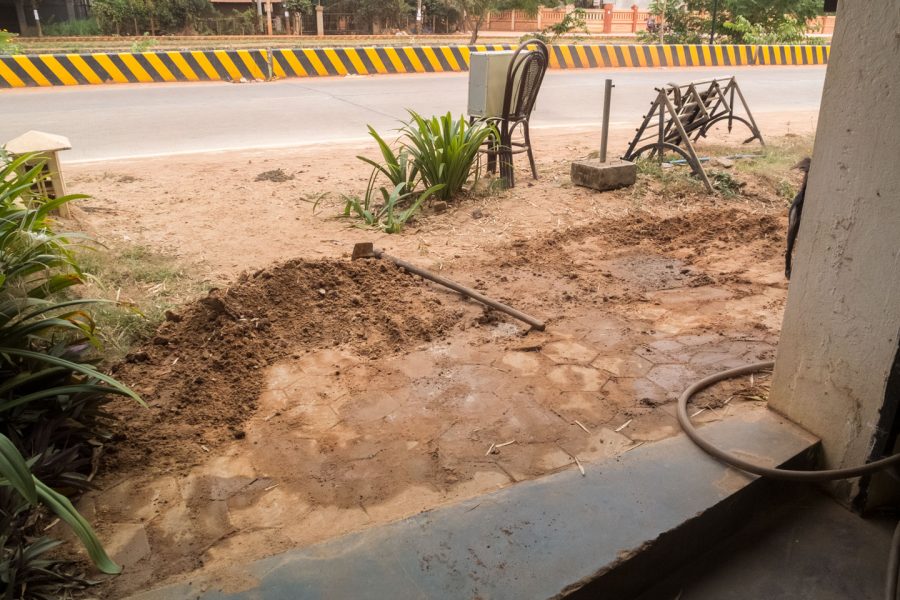 Ok now I get it. They simply filled the area with dirt which covered the original floor. 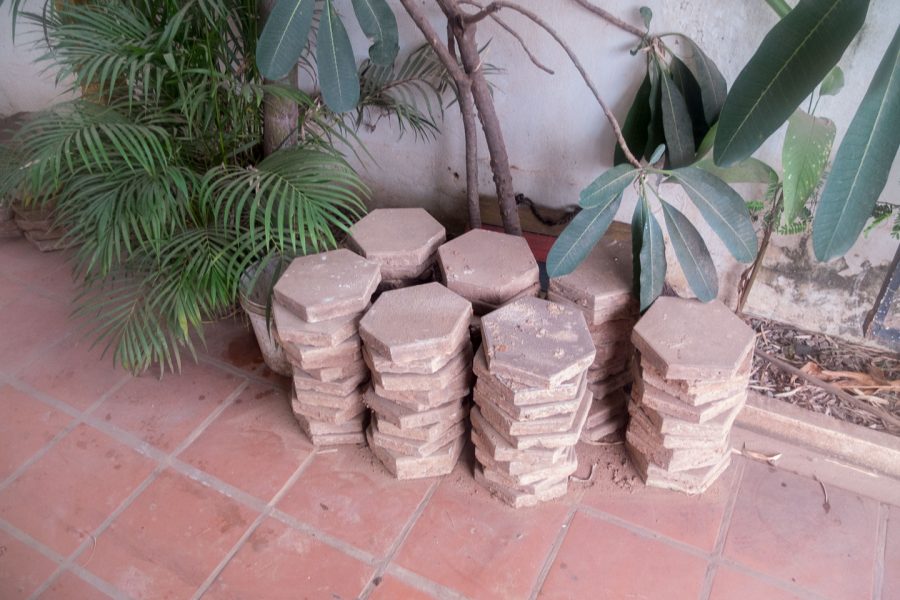 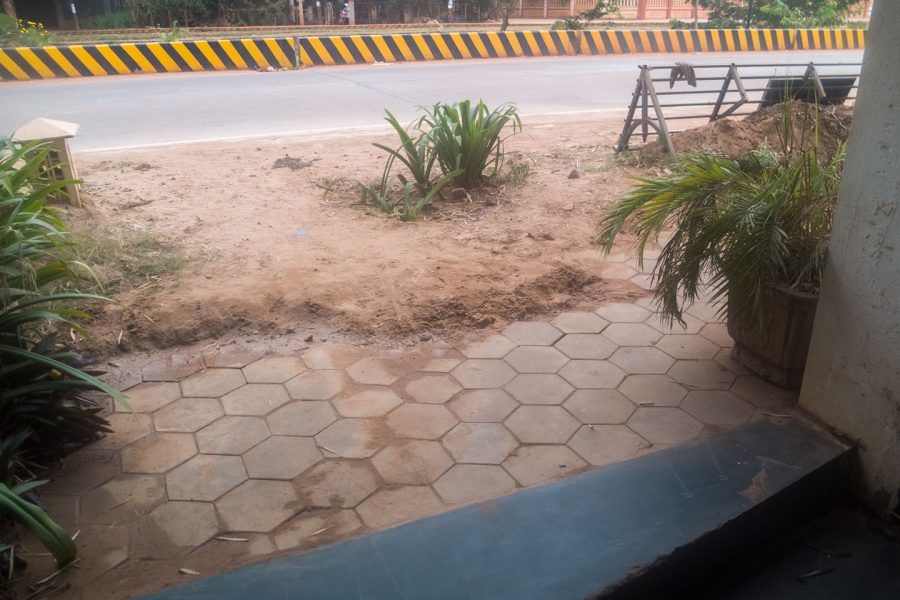 It’s a shame that they covered this nice floor. I’ll have to dig all the way to the road. 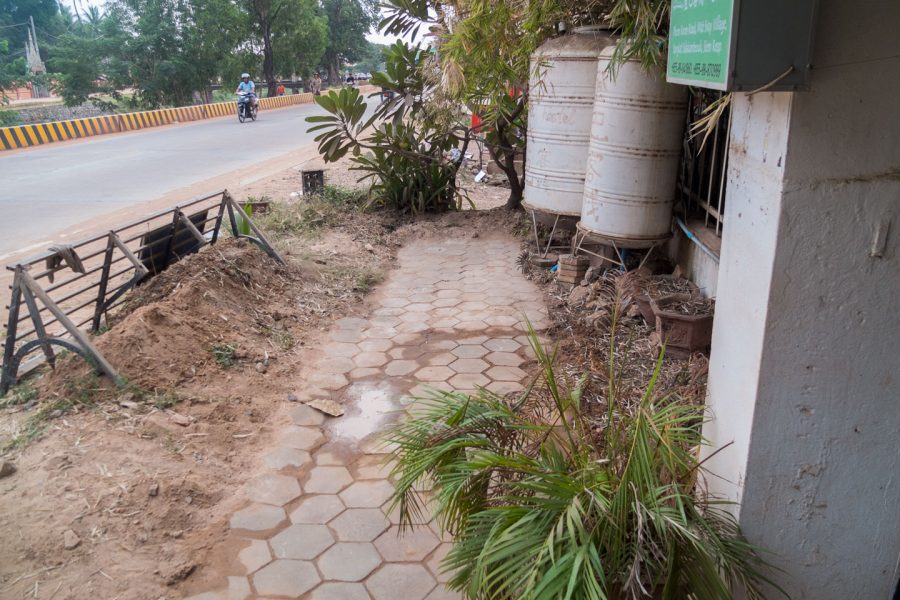 The more I dig, the more I found pavements, ouch! The whole front use to be covered! 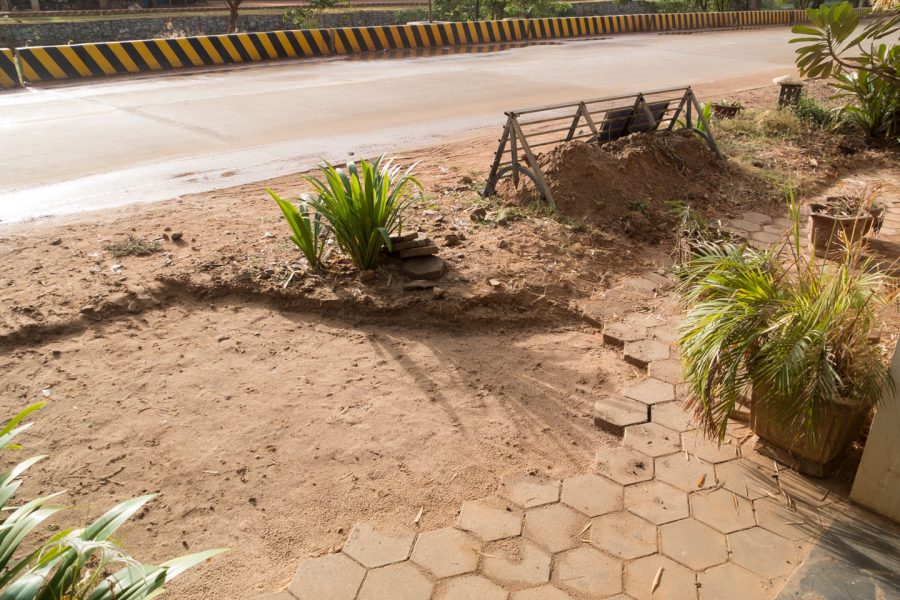 Another day, another step forward. I’ve extracted all the tiles and created the slope. Yesterday evening, it rained a little bit, just enough to prepare the ground for tiling. 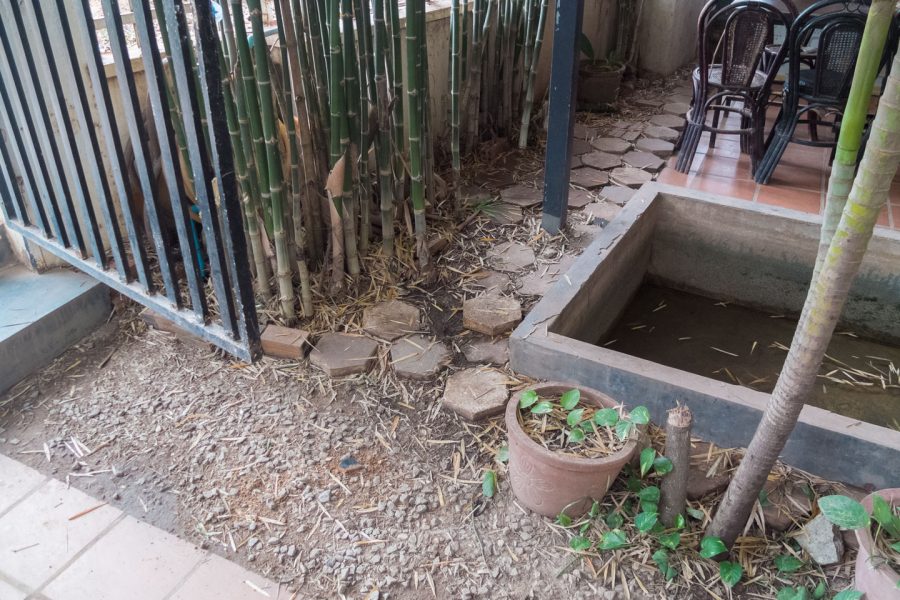 I will need more tiles in the future and I know where I will get them from :-). This area will be covered with small rock in the future. 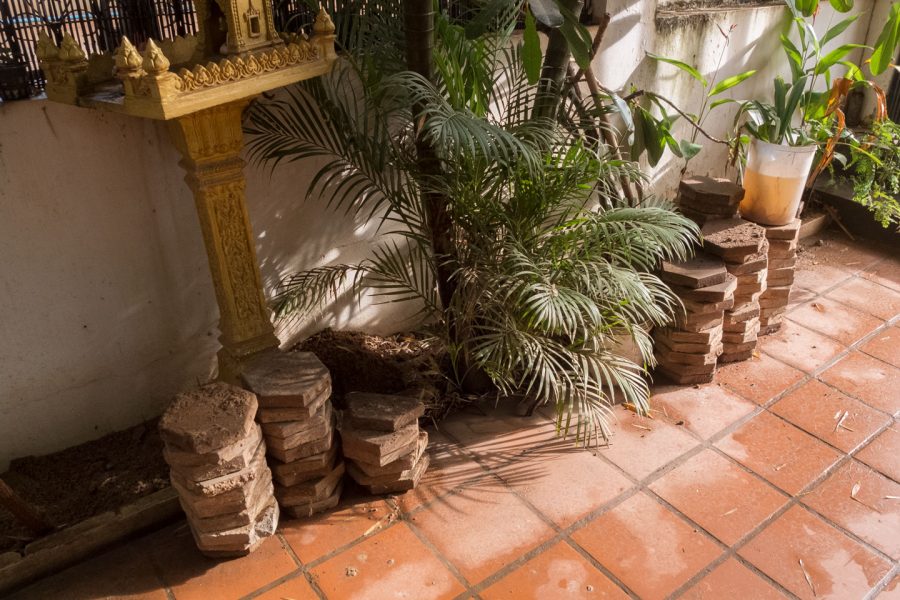 I’ve got more and more tiles. 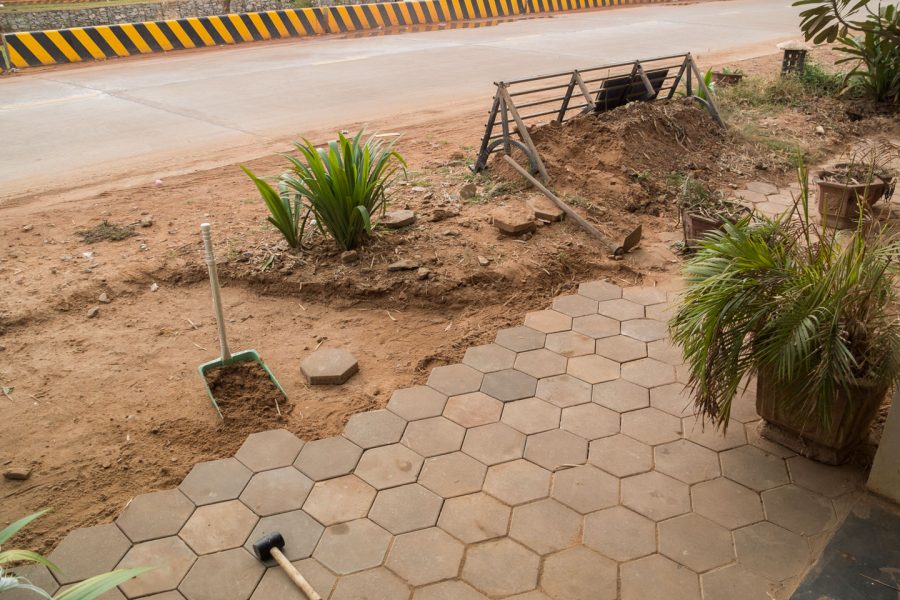 Let’s make the new floor :-) I’ve never done that before and figured out a technique myself. I hope it will last more than a month, at least. I just add some wet sand, and hammered down tile after tile to make sure they will remain stable. Then I want to get rid of this dirt because I have to much. 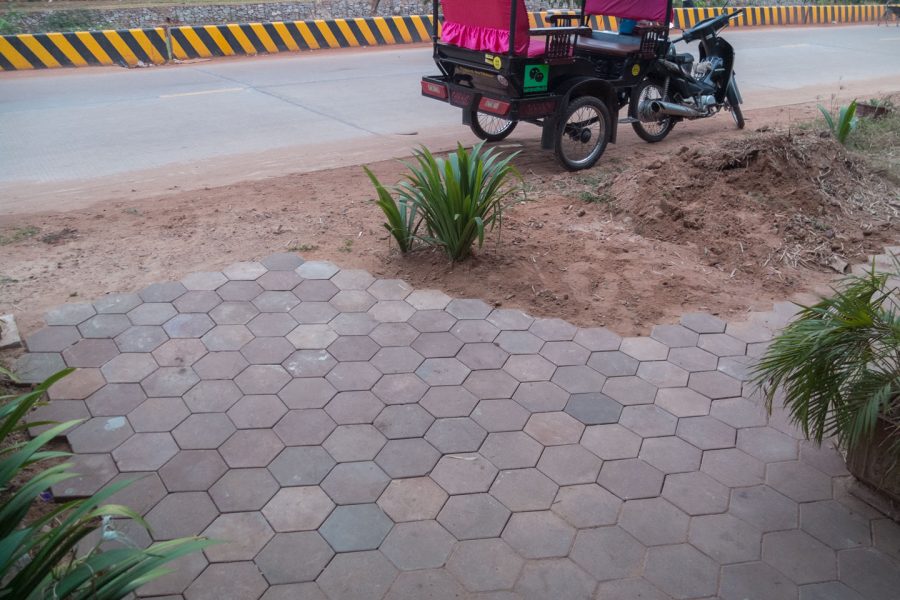 The first part of the floor is now done. That’s looks a lot better :-) I really hope it will last.

In the mean time, I also fix the signs. The light were broken and the Dengba sign use to sit on a chair… Not very professional looking. I will have to paint the tanks again later because Tina tagged them. She wanted to do something good, but I think it’s worse now. 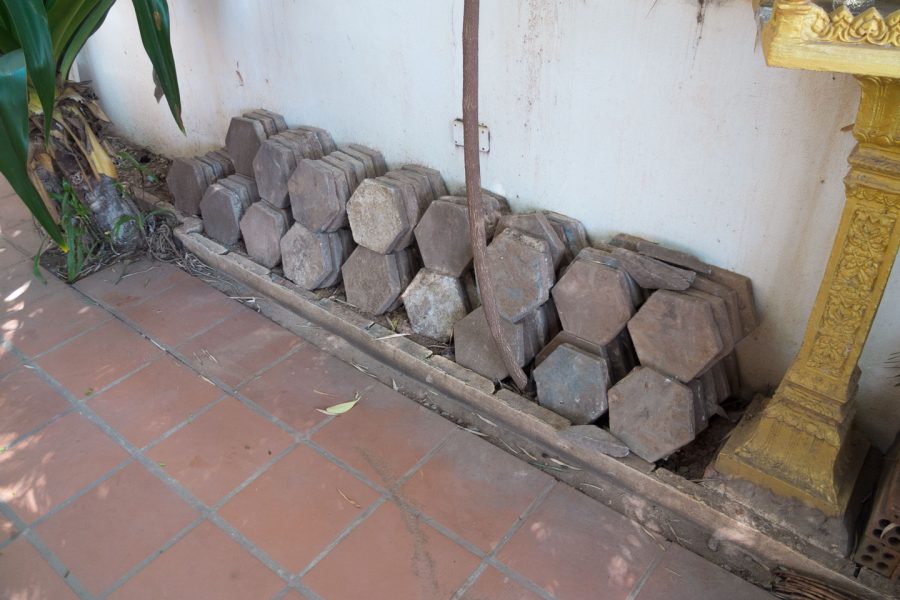 By searching around the property and digging out more tiles, I have now a huge collection :-) That’s good because this project is not finished yet. 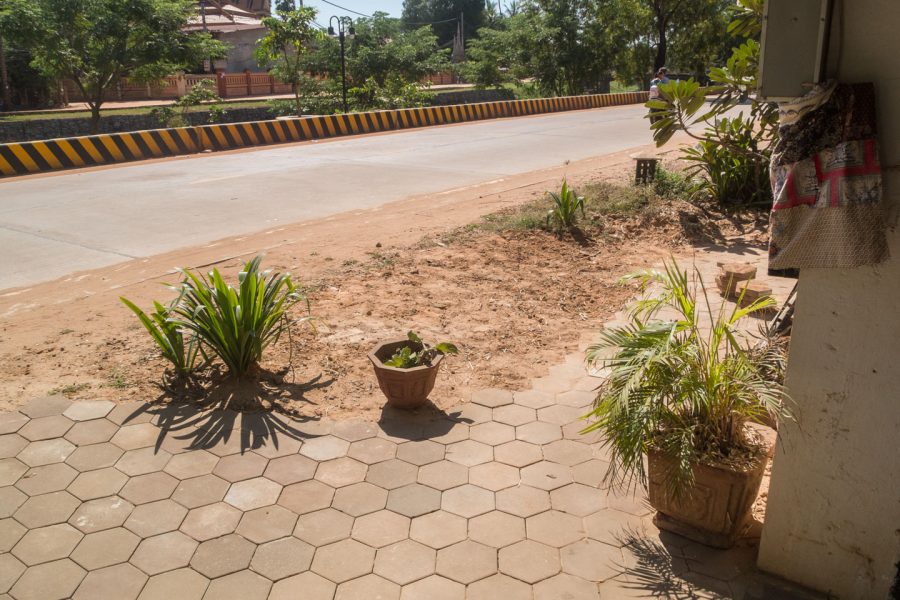 Finally I got rid of that big pile of dirt. Now the front of the guesthouse looks a lot better. 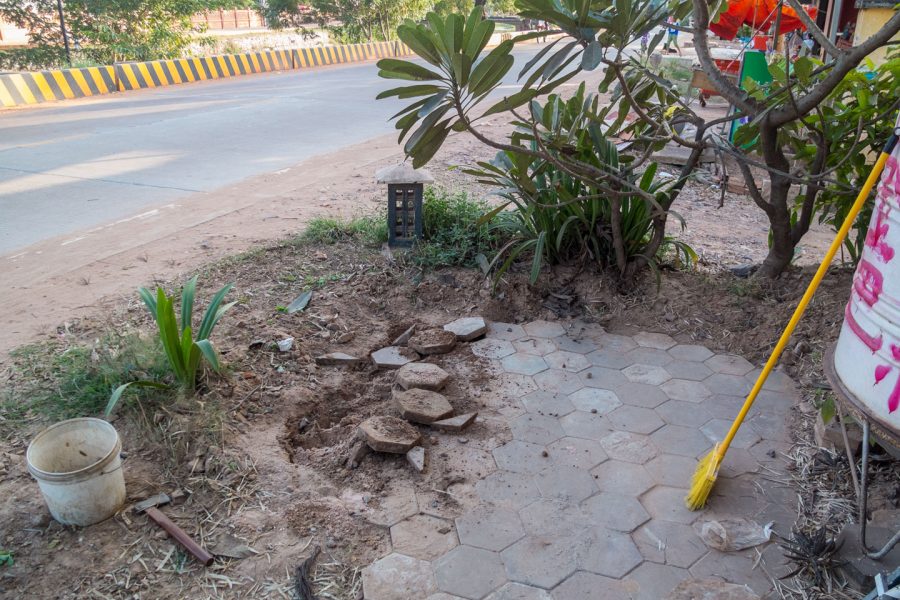 Another week later… From the main entrance, the pavement was running along the front of the hostel until a dead end. So I kept on digging and discovered that originally, the floor turned back towards the road to create a secondary entrance. Now I’ve got more work to do. 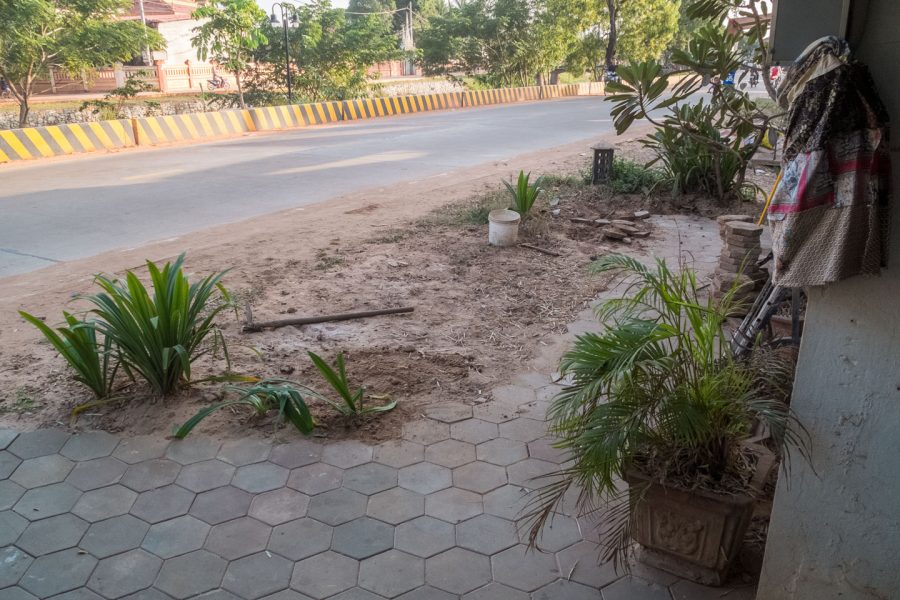 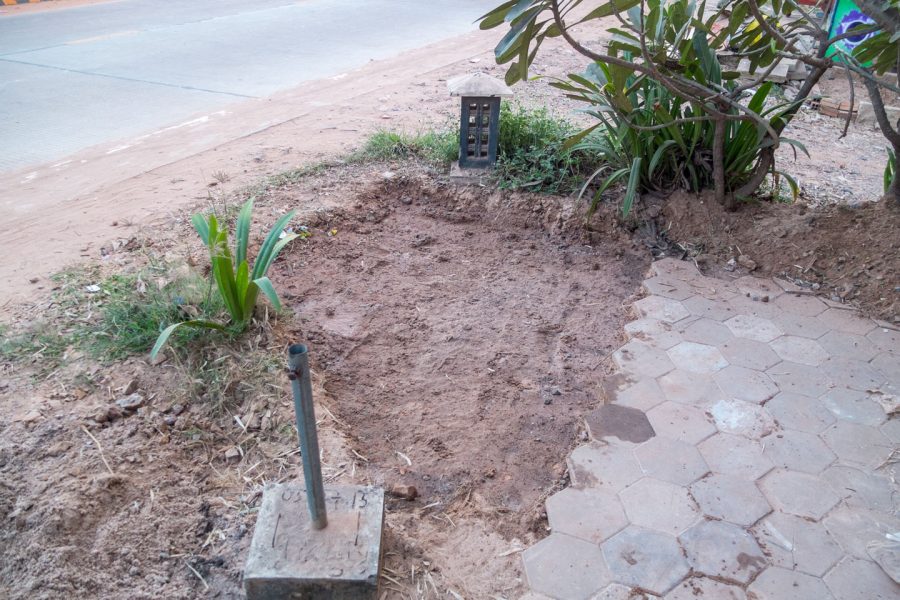 Same technique as before. I created the slope and added some water. I will tile up later on. 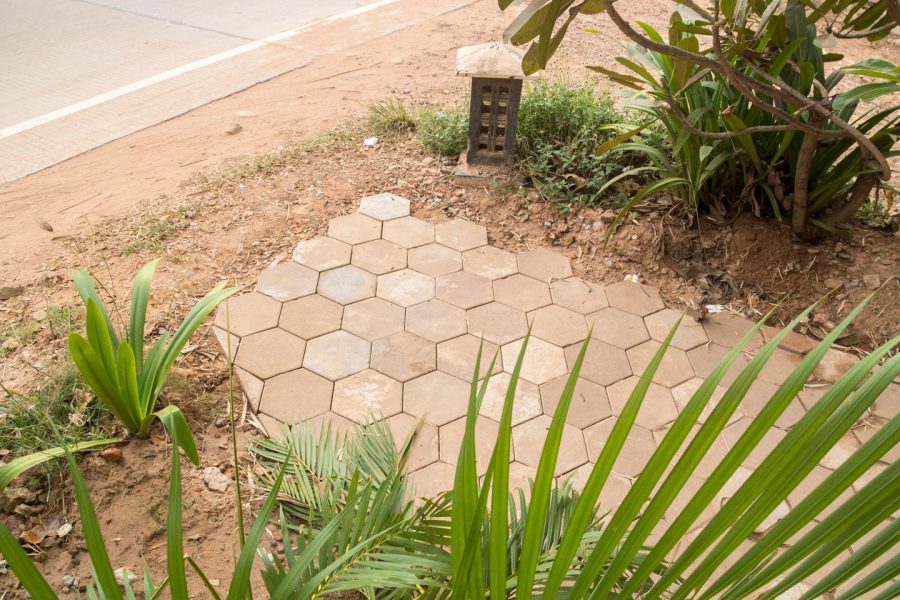 Another day, another progress :-) It’s not finished yet but the idea is here. 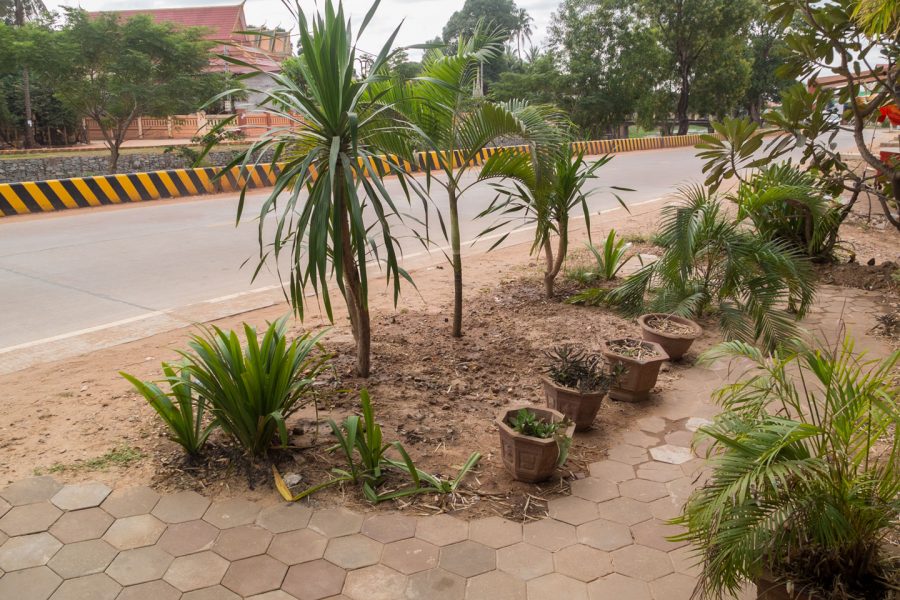 Today, we saved some trees. In fact, there is few trees that live in pots which are away to small for them. So we selected three of them and plant them at the front to complete the decoration. 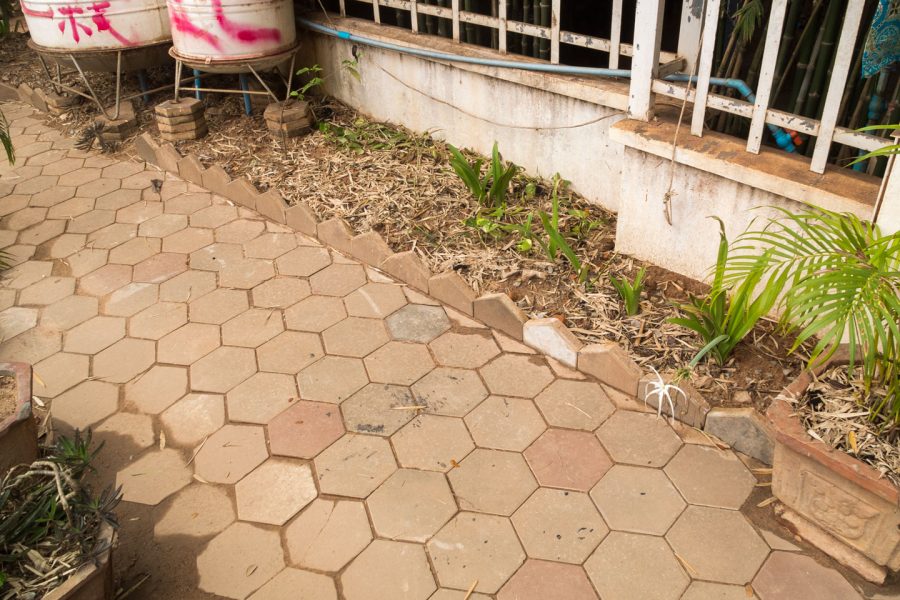 Today I’ve started the details and planted some more plants I’ve found in more pots inside. 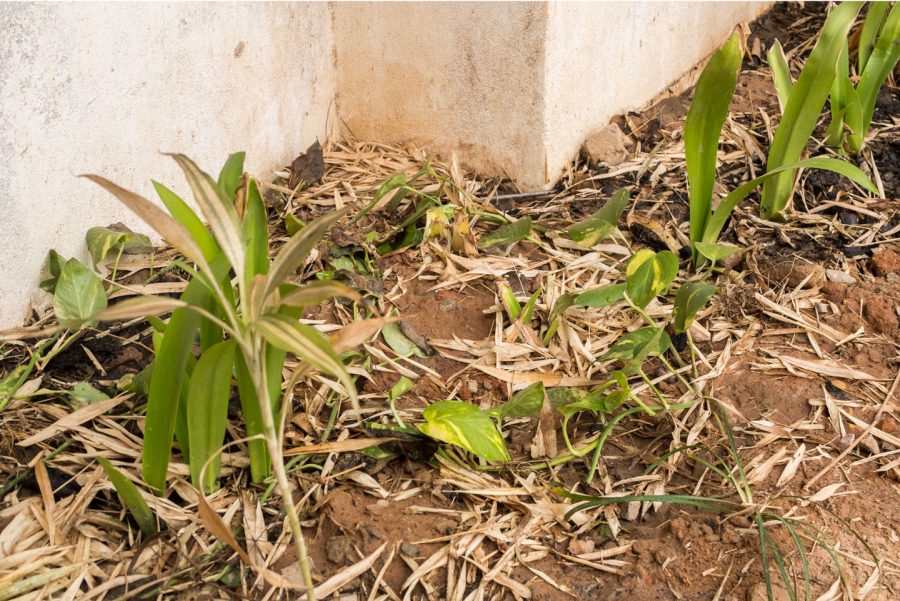 They seems to be happy here for now. 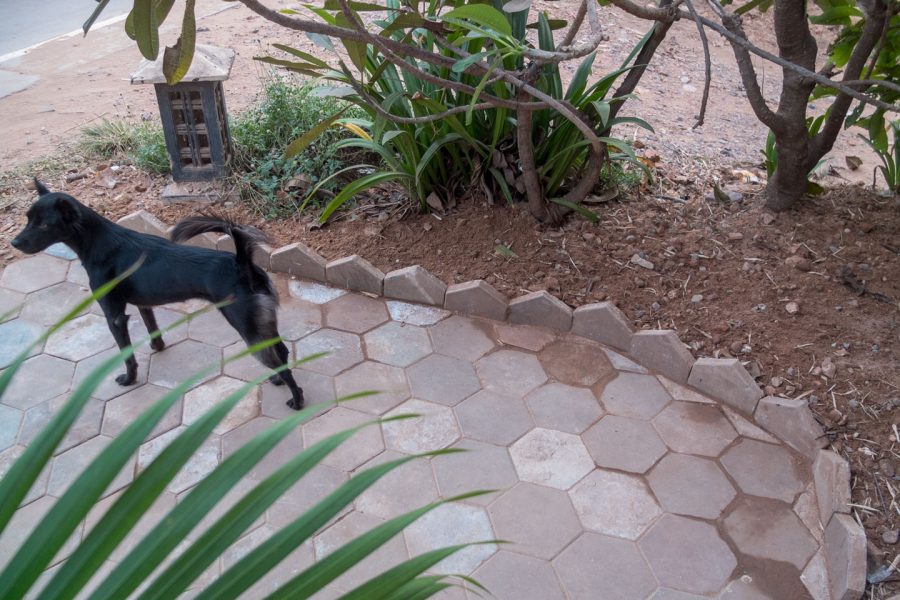 I also finished the border on one end. I’ll have to do the other one later. Lucky, what are you doing here? 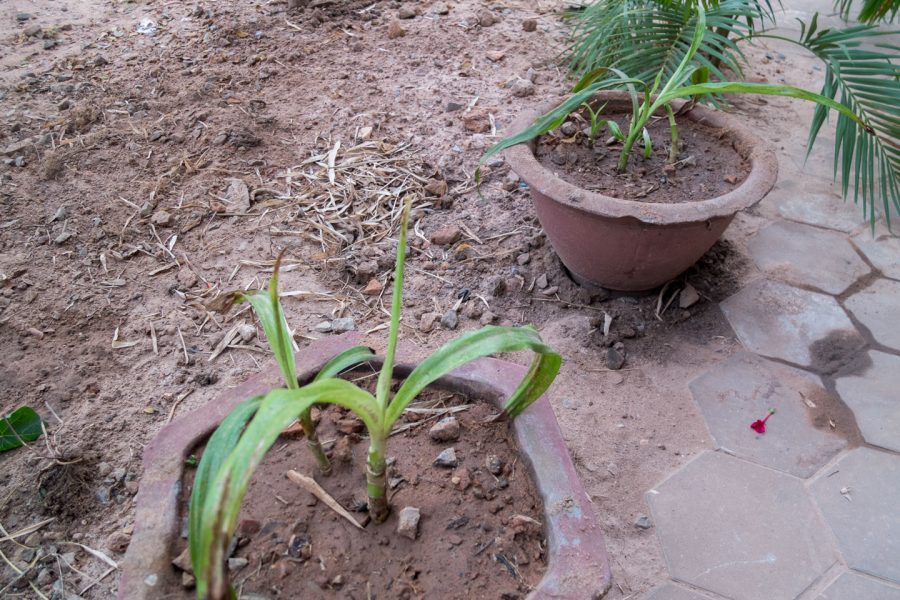 The pots of the old trees did not stay empty for a long time. 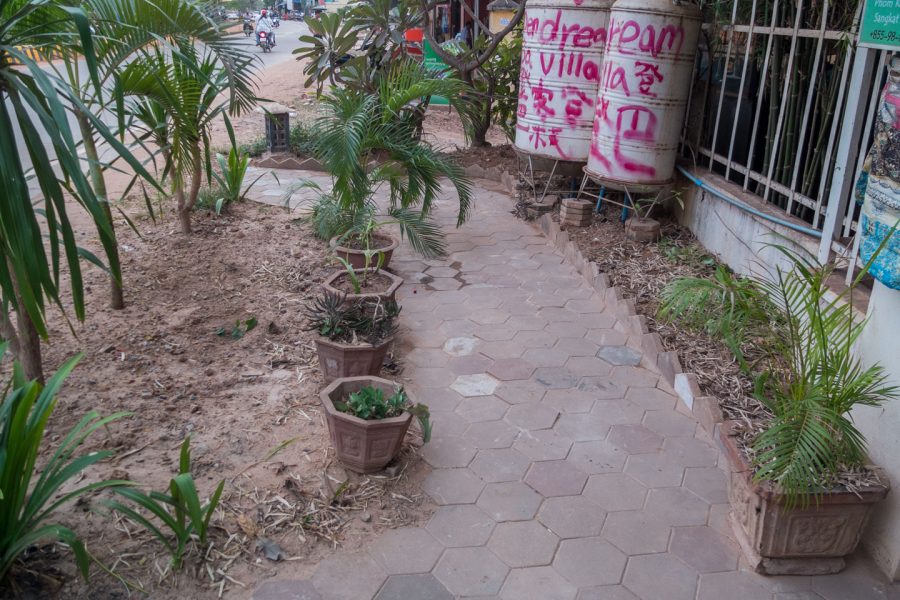 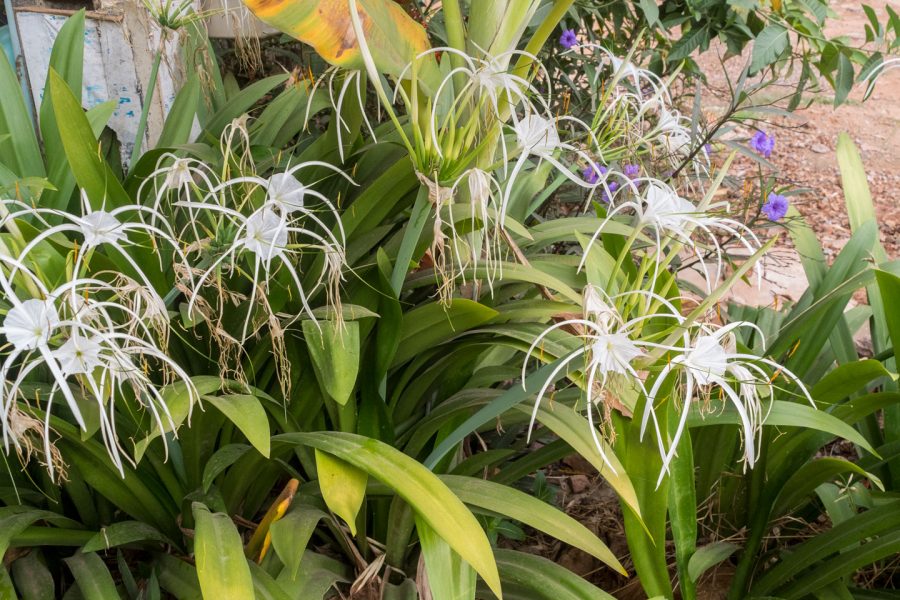 Since we water the garden, those flowers don’t stop to blossom. 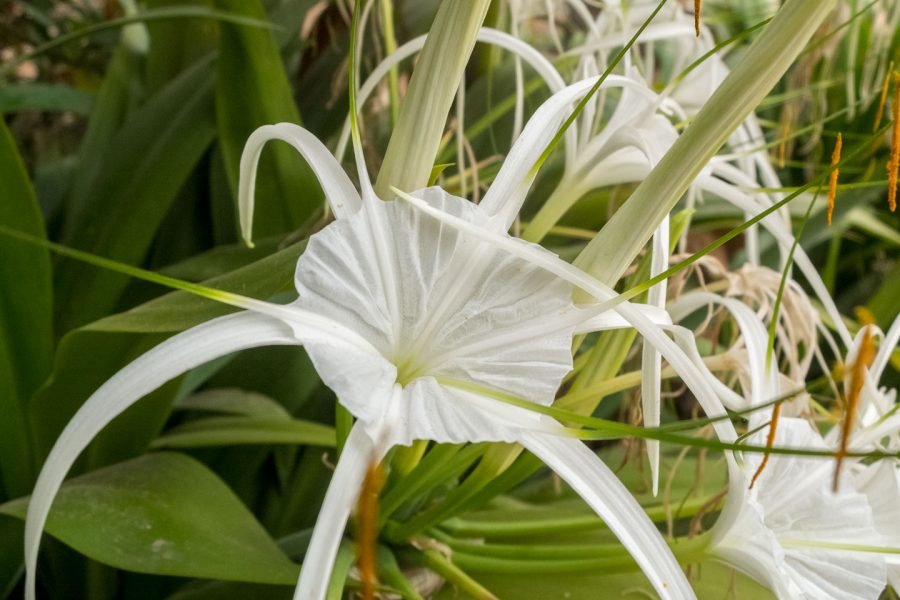 And the smell is wonderful. Can you? Sorry…