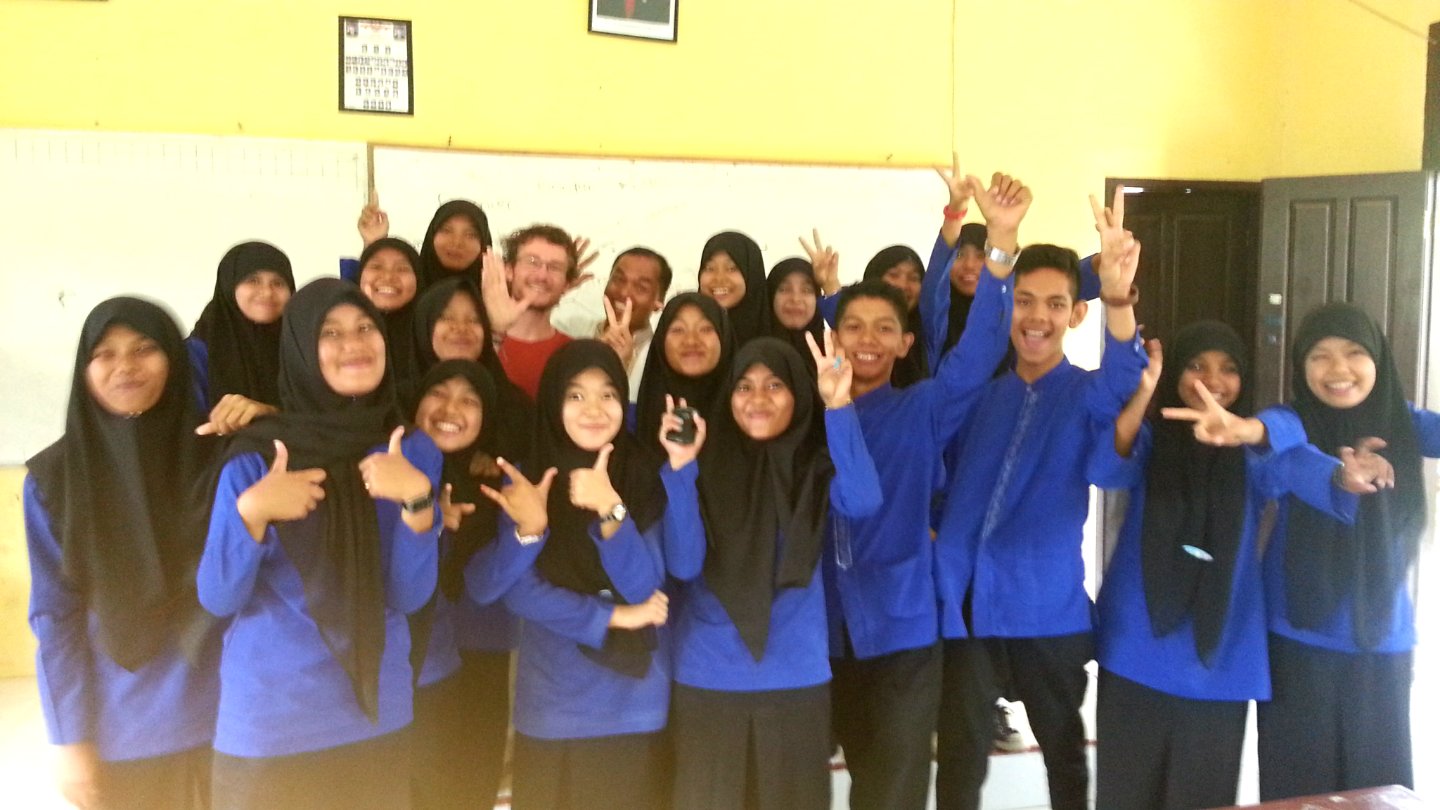 A new day for a new experience. As we agree yesterday, I’ve been visited the school next door where Rahmat’s sister and certainly all her brothers and sisters have been studying. I met first few teachers and then the english one. We talked about the differences we can find in our culture and the importance of english today. The teacher invited me to appear in his classroom and exchange with the students, in english of course. I think it’s great!. I really think that the school system need to teach students how to like english. It needs to show them how important is it. Yesterday, another Rahmat’s sister (the one who loves selfie ;-) asked me to help her with her english exercises. The english books are difficult. As I said to the english teacher today, the story showed in those books are just not realistic. They talk about babies singing with angels inside flowers. How come this is going to be useful in real life?

They should learn english through the story of their own country. Or talk about history, fashion, facebook or whatever but create a link between learning the languages and what you can do with it. And France has the same problem. We study dum non interesting texts that doesn’t help in real life at all. I hope like the teacher that I opened the mind of those friendly students. And I wish the school where I went would be more open as well. They don’t create links between the different classes like Math could talk a bit about history sometimes or Chemistry about math, english about geography. Everything is working together but at school we study them separately… I think this is wrong and I just realise it now. 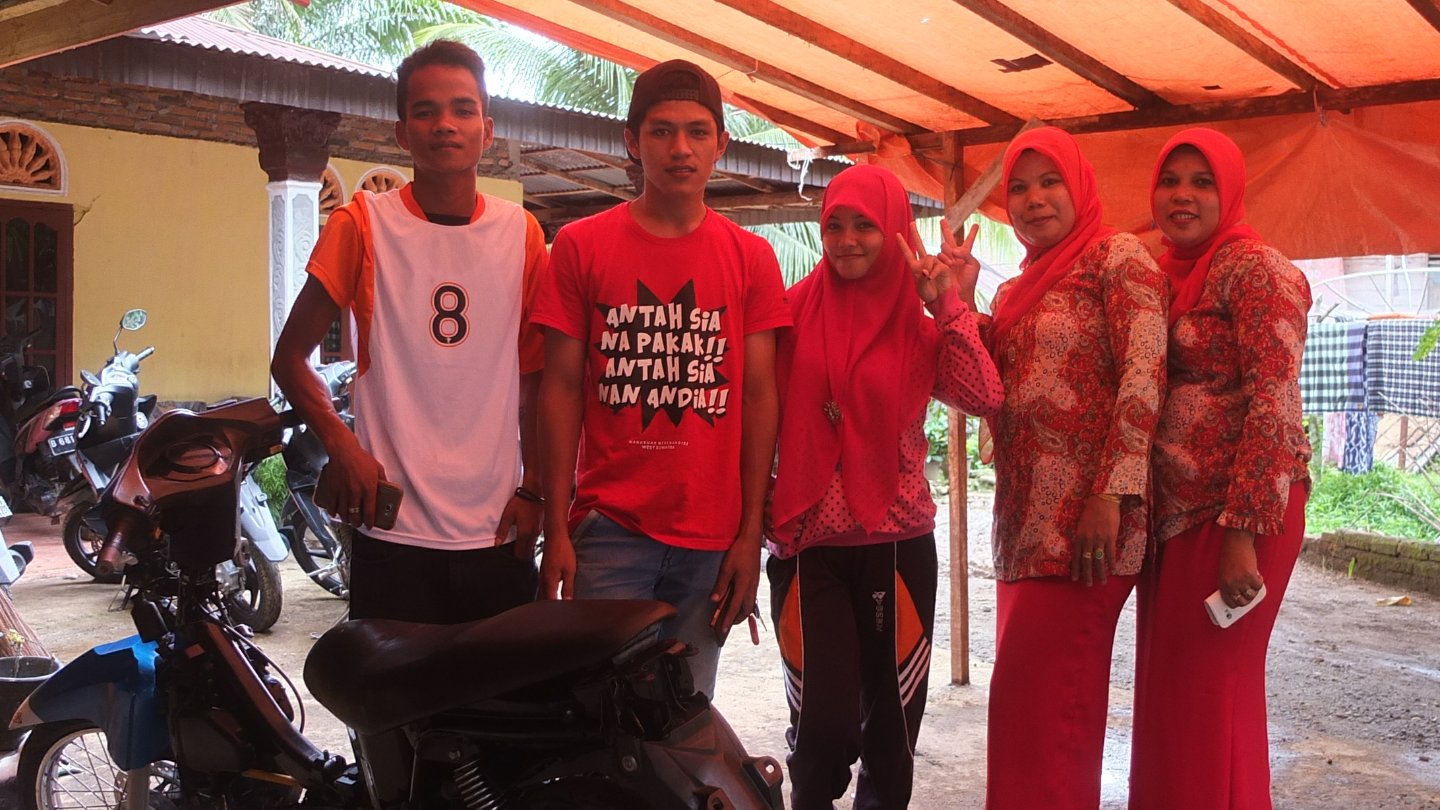 I’ve spent much more time than I wanted to in the classroom but I’ve enjoyed it. Actually I would be very happy to come back again :-) I’m ready to leave this morning. I must go unfortunately. More photos for memories? Yes of course. On the right hand side, two teacher, on the left, Rahmat, a friend and Rahmat’s sister. 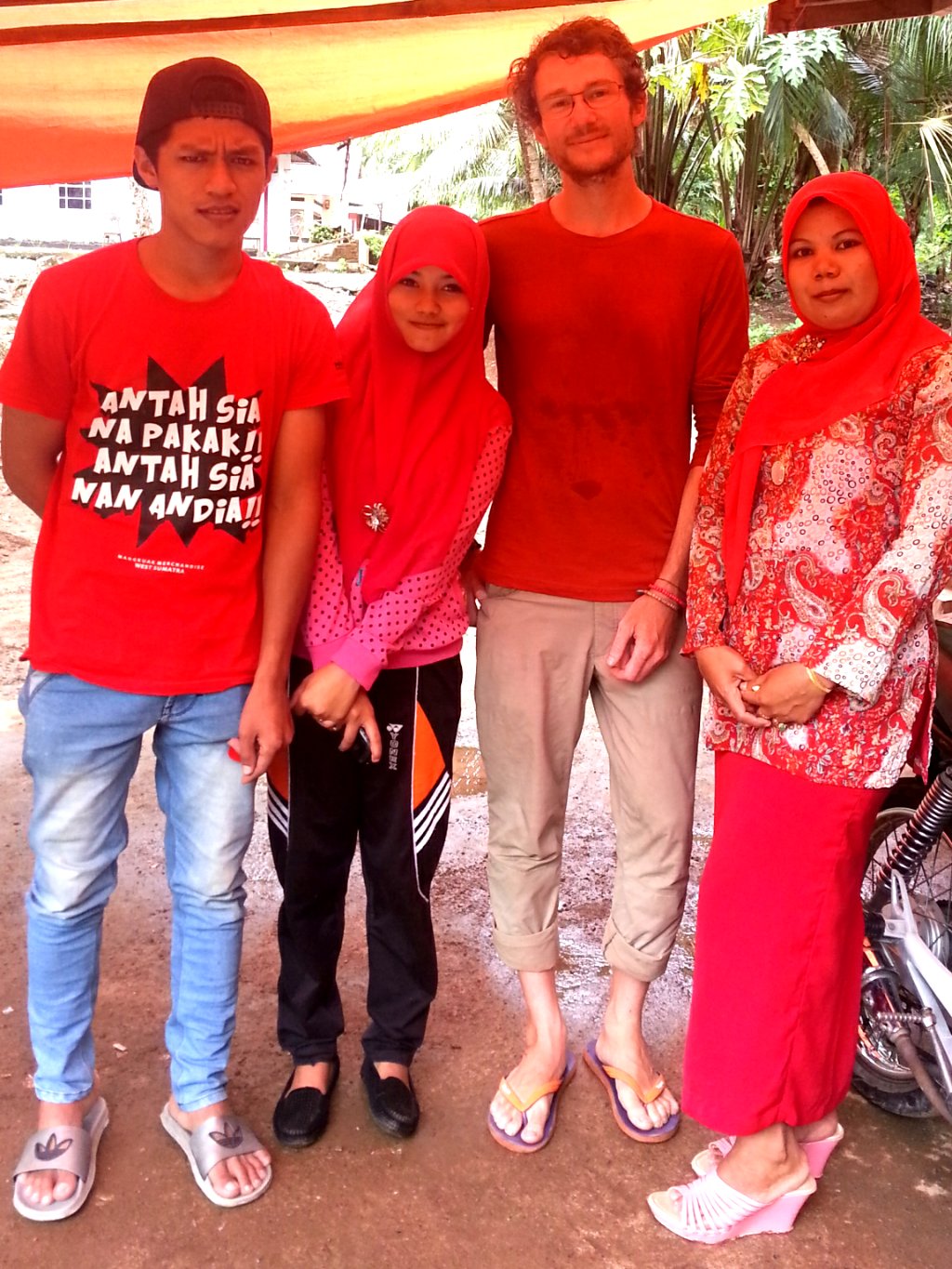 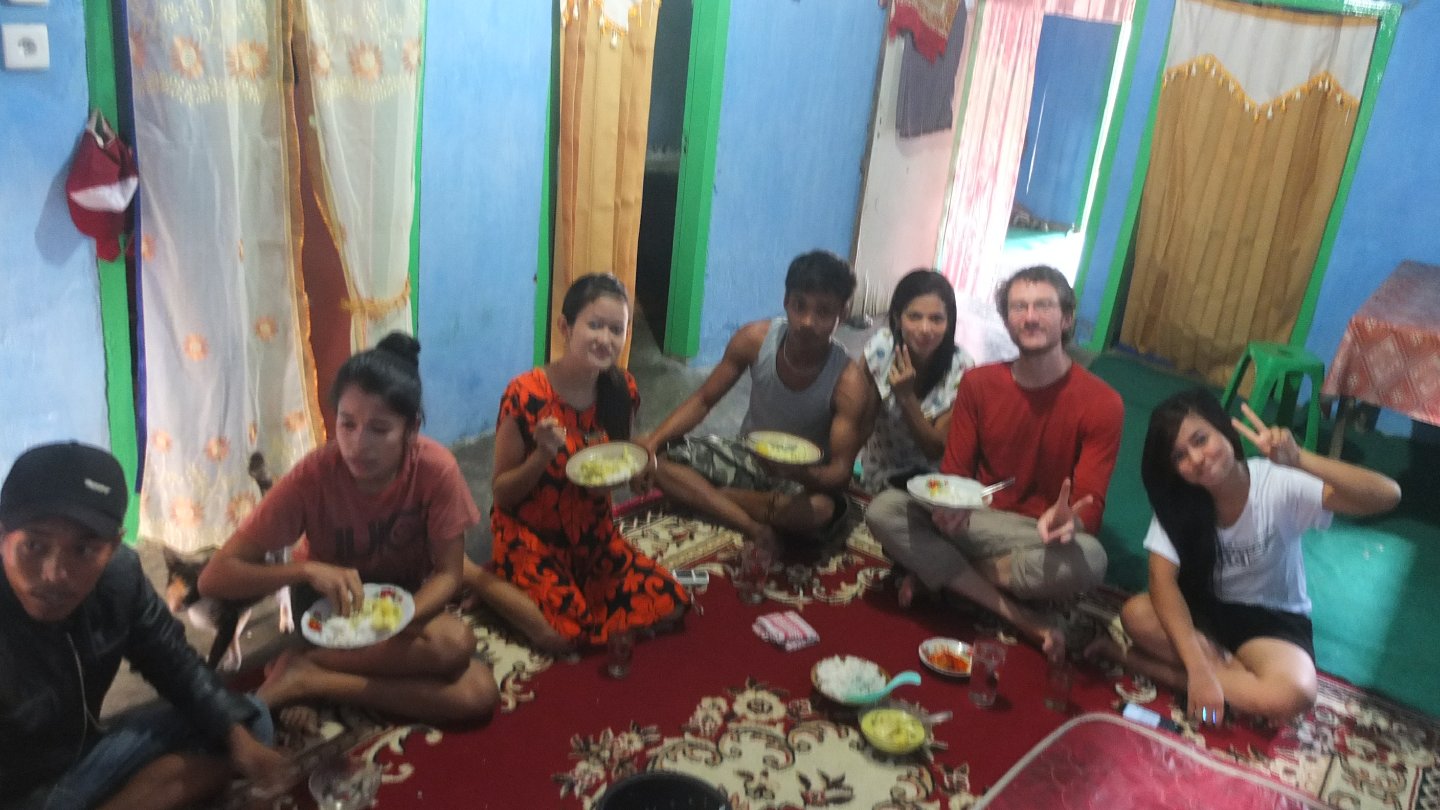 Rahmat’s mother asked me if I wanted to get some breakfast before I go. Well, yes, I can eat and enjoy a bit longer with you guys :-) 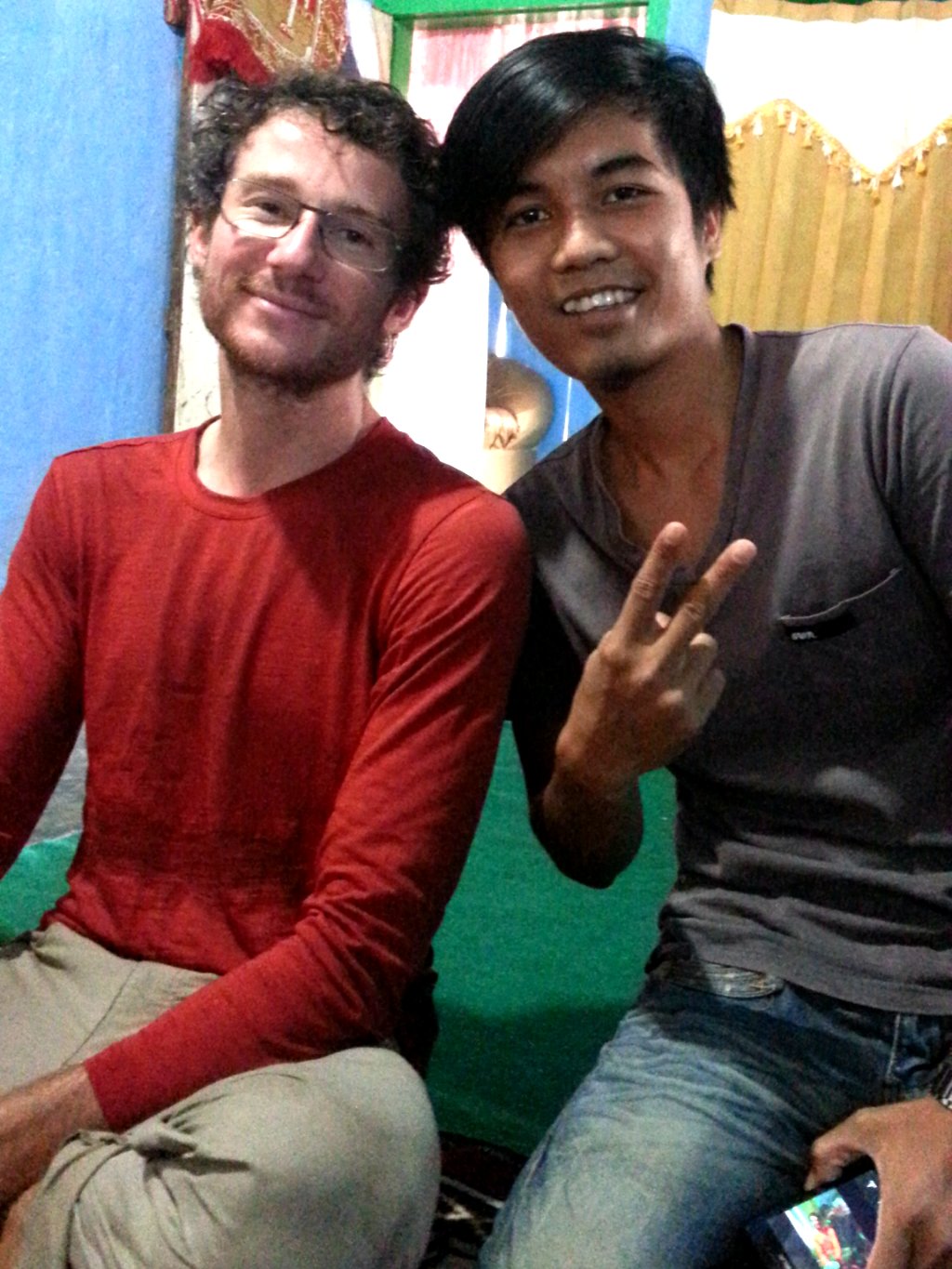 I’m not sure if this map is really accurate. My GPS is now bogging several times per day (I don’t know why) and I’ve lost all my tracks between Bukittinggi and Dumai which is very annoying…

This is it, after multiple temptation, the time arrived and I had to leave. I had great time here and I’m thinking about coming back after Malaysia. I’d love to. My only concern is the mountains that are situated between here and Dumai. If I come back I will have to cross that section again! 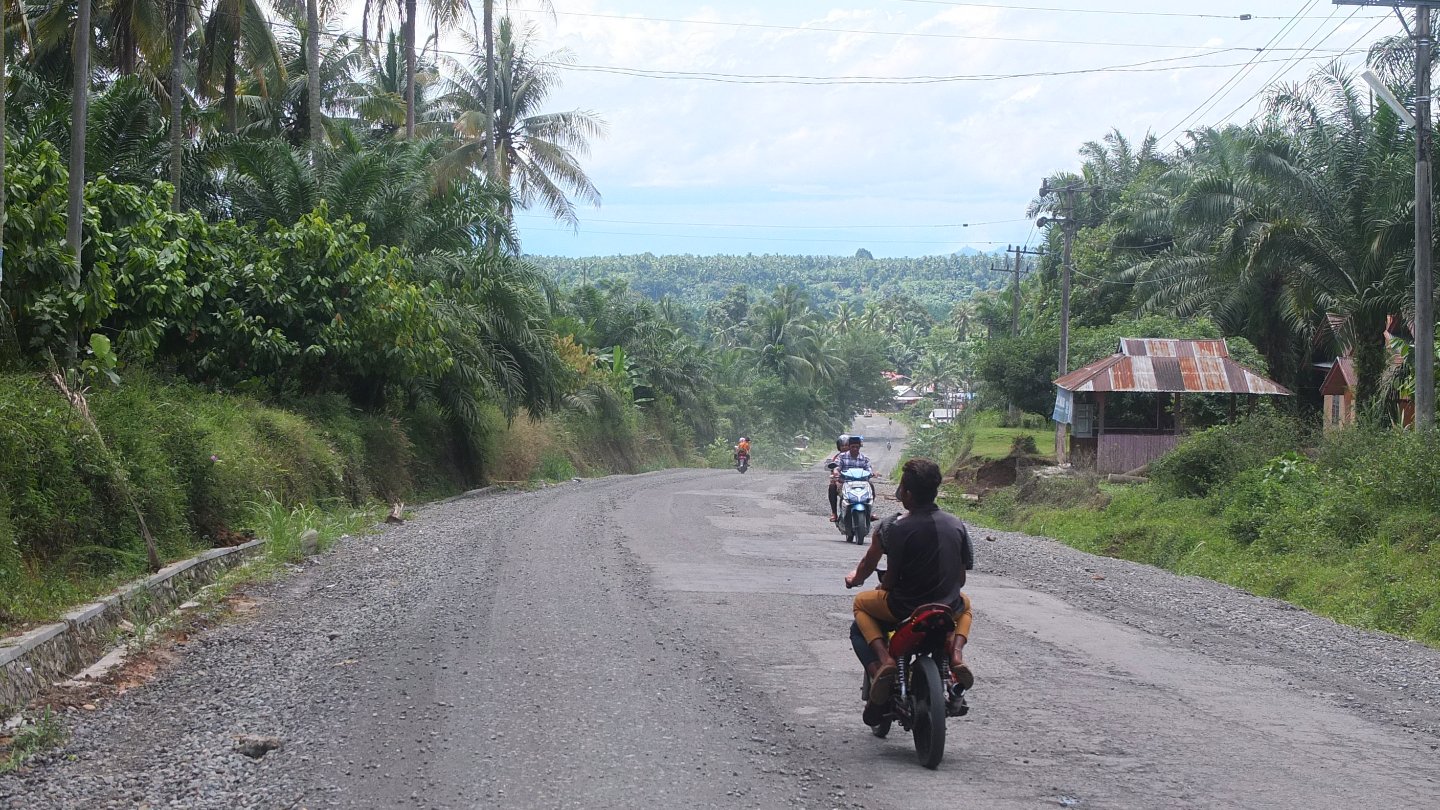 This part of the road is passing through some huge forest of palm trees. 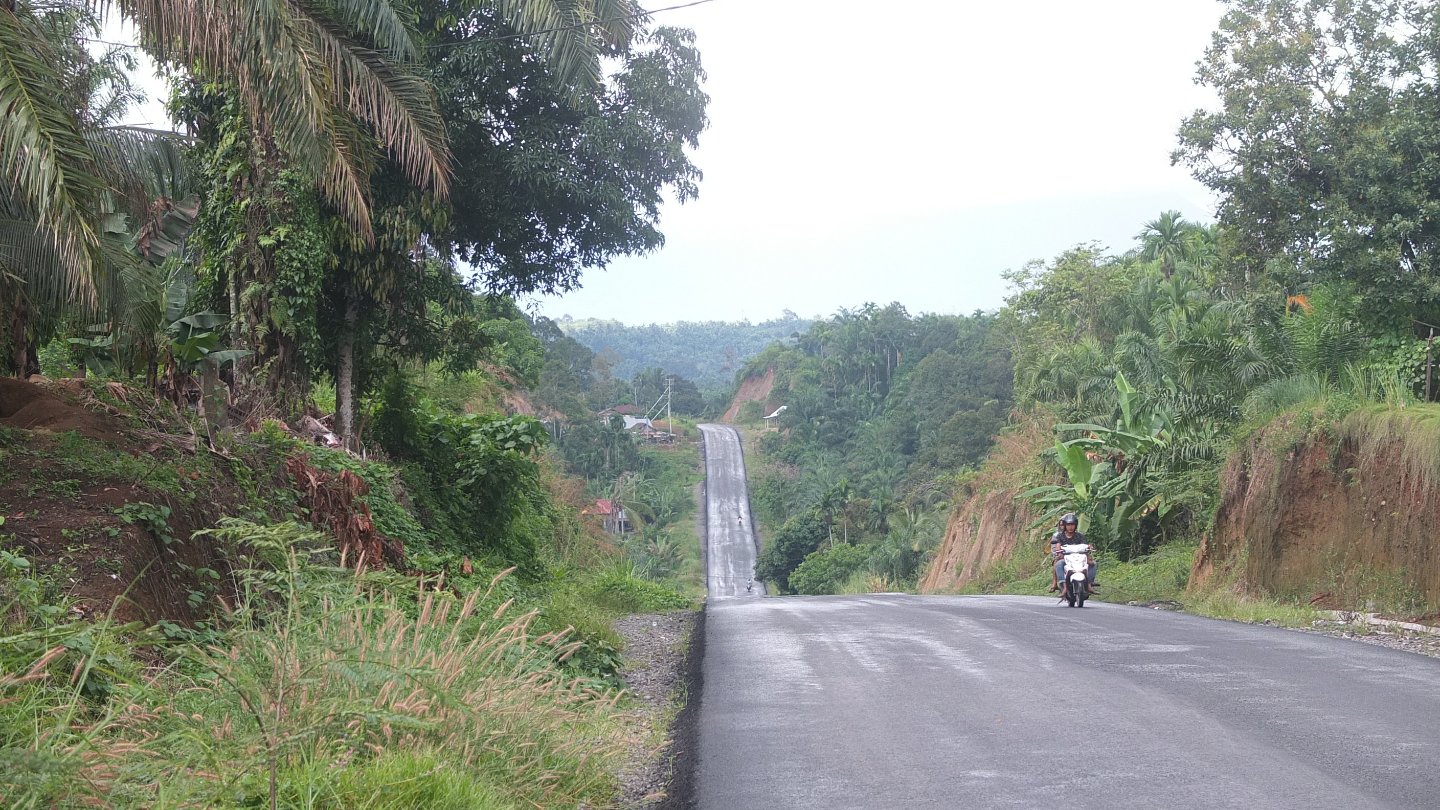 The road is hilly and it’s very hot already. 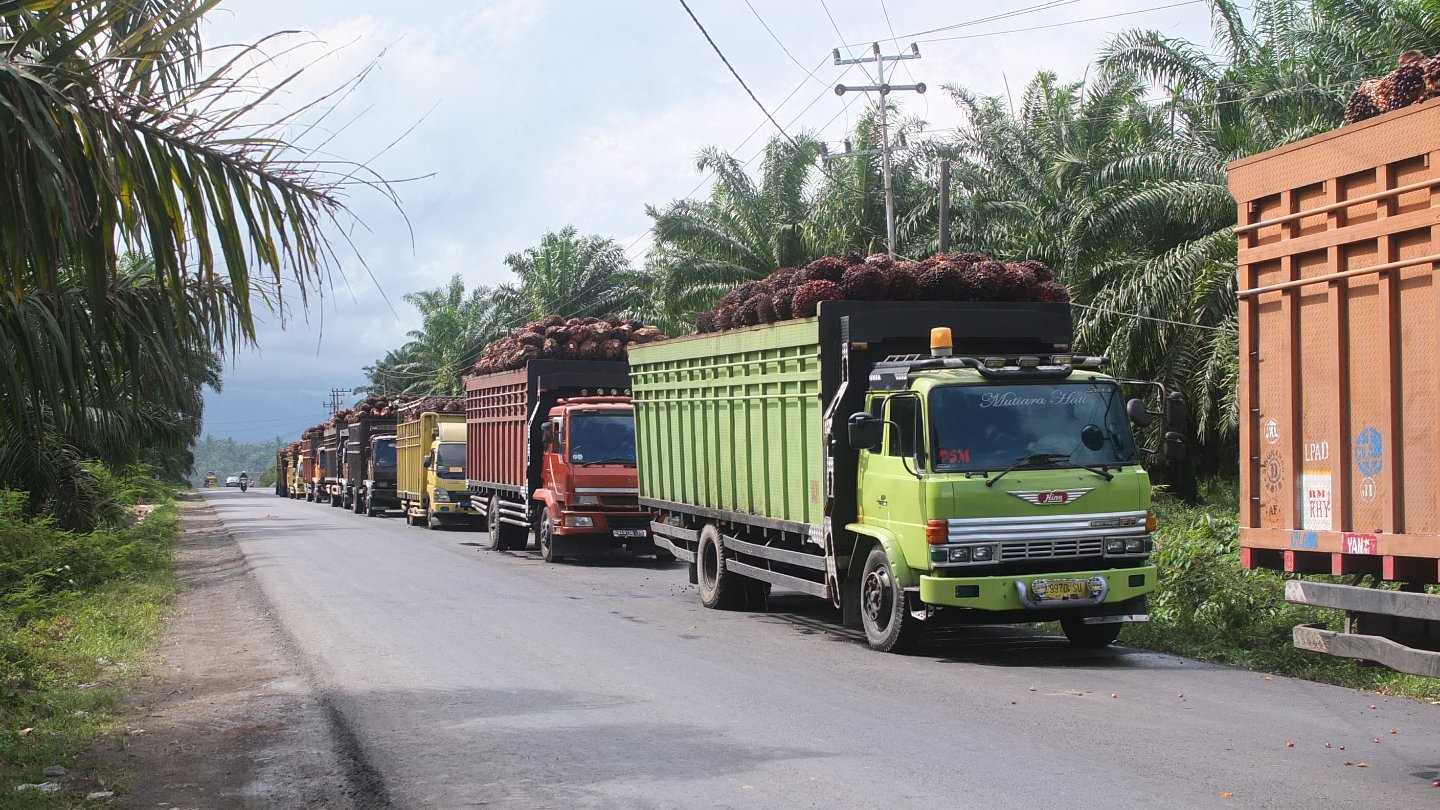 Trucks, trucks and trucks. But what do they transport? 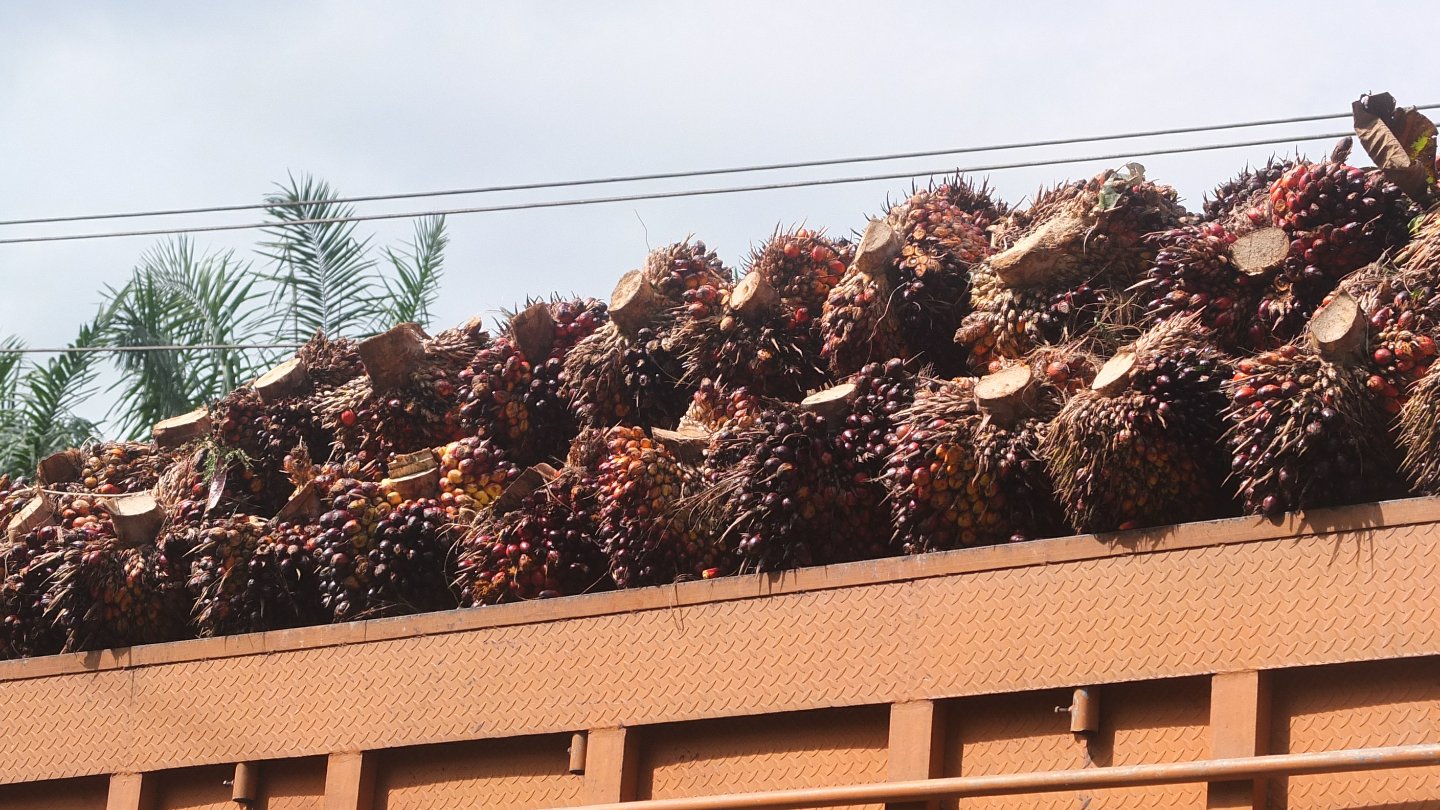 I guess this is palm oil. I’ve heard many times that the palm oil production is huge in Indonesia and apparently Sumatra owns the bigger part of it. 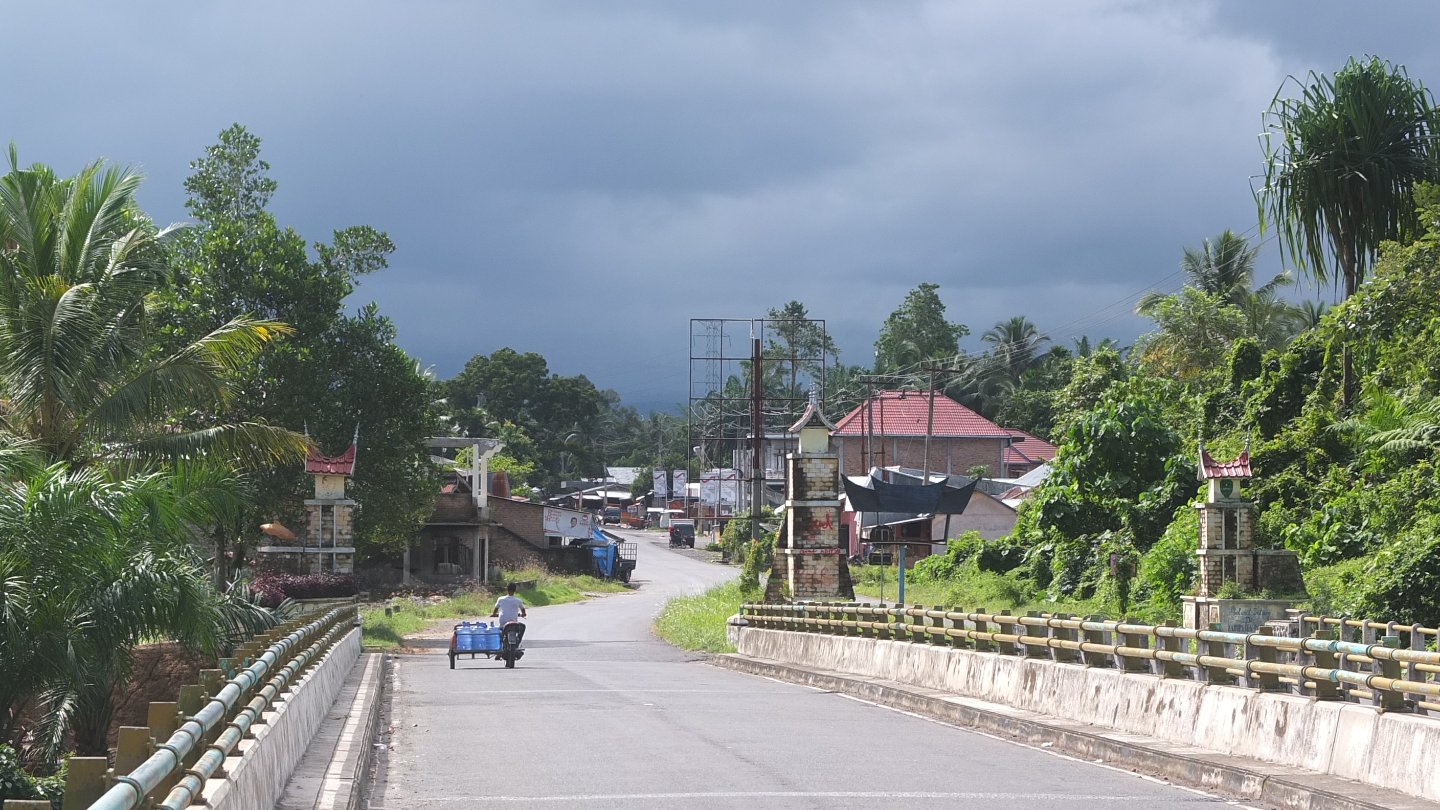 The weather seems to be unstable. This morning when I had breakfast with Rahmat’s family it started to rain. I thought I was going to stay one more day more it did not last. Maybe I’m gonna get a shower very soon. Anyway, I need one already! 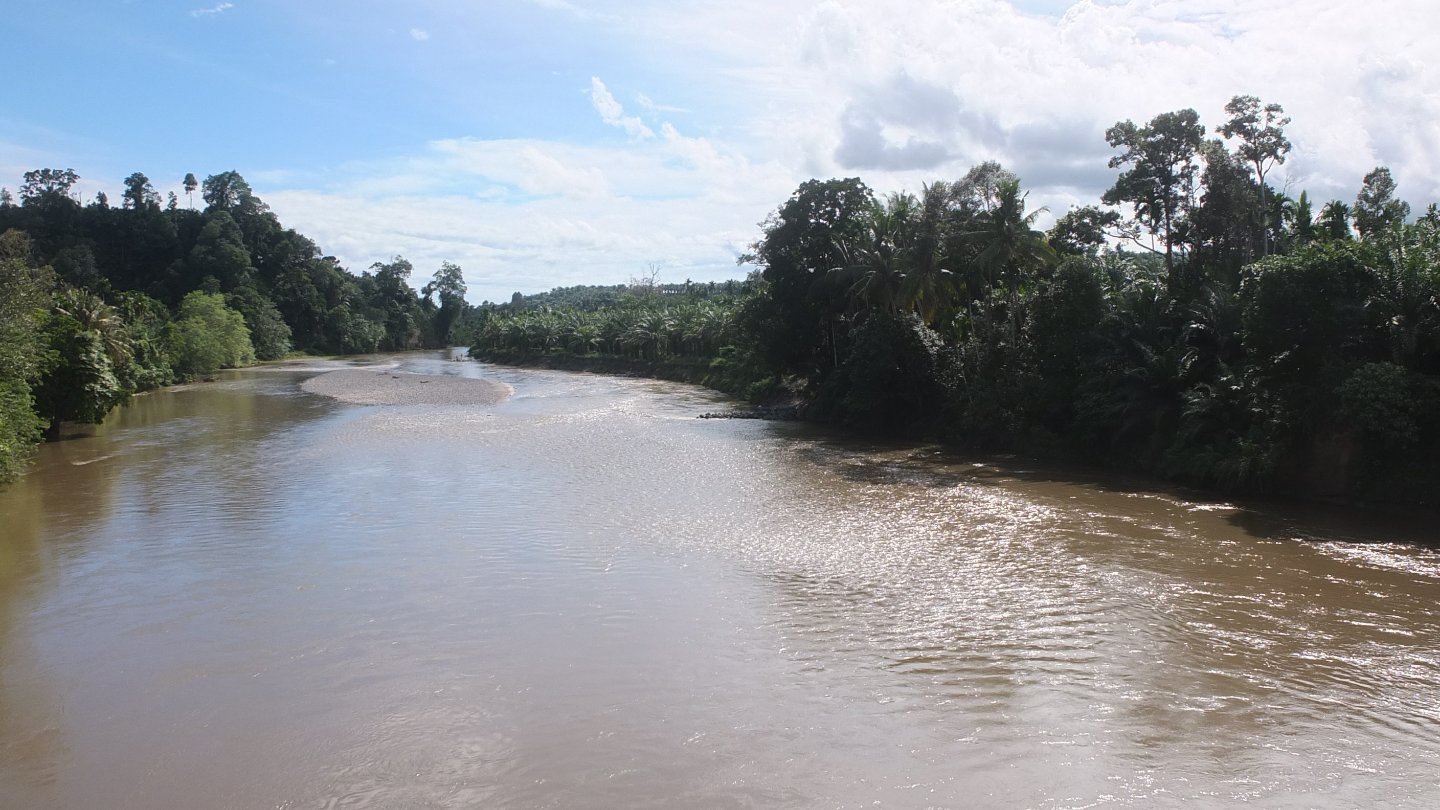 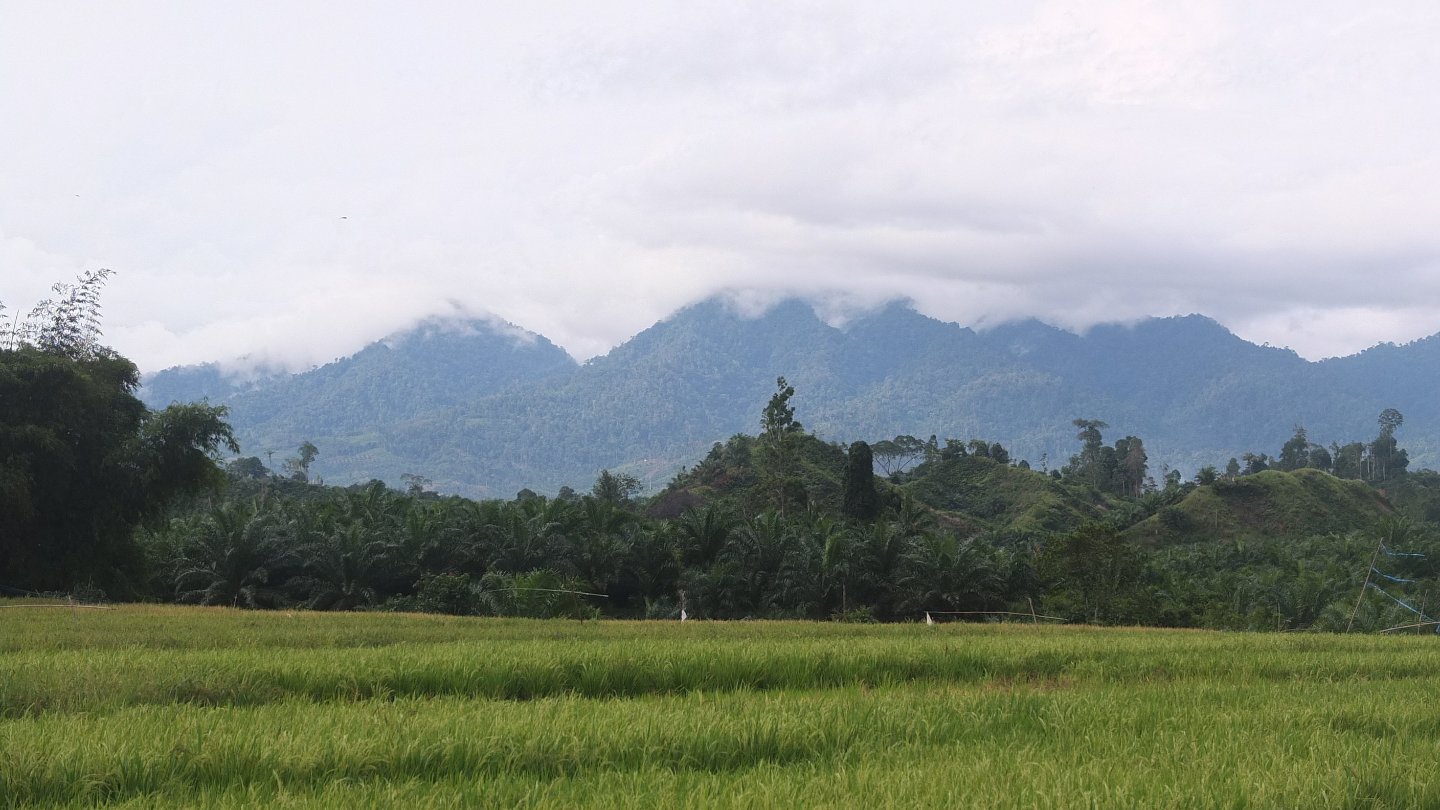 I arrived in a kind of city where I stopped to asked my route and had a short break. Quickly people started to accumulate around. I explained nearly everything in Indonesian my trip. I’ve done some progress now and learn some more words :-) Then I stopped in a Warung to get some lunch and continue my way. 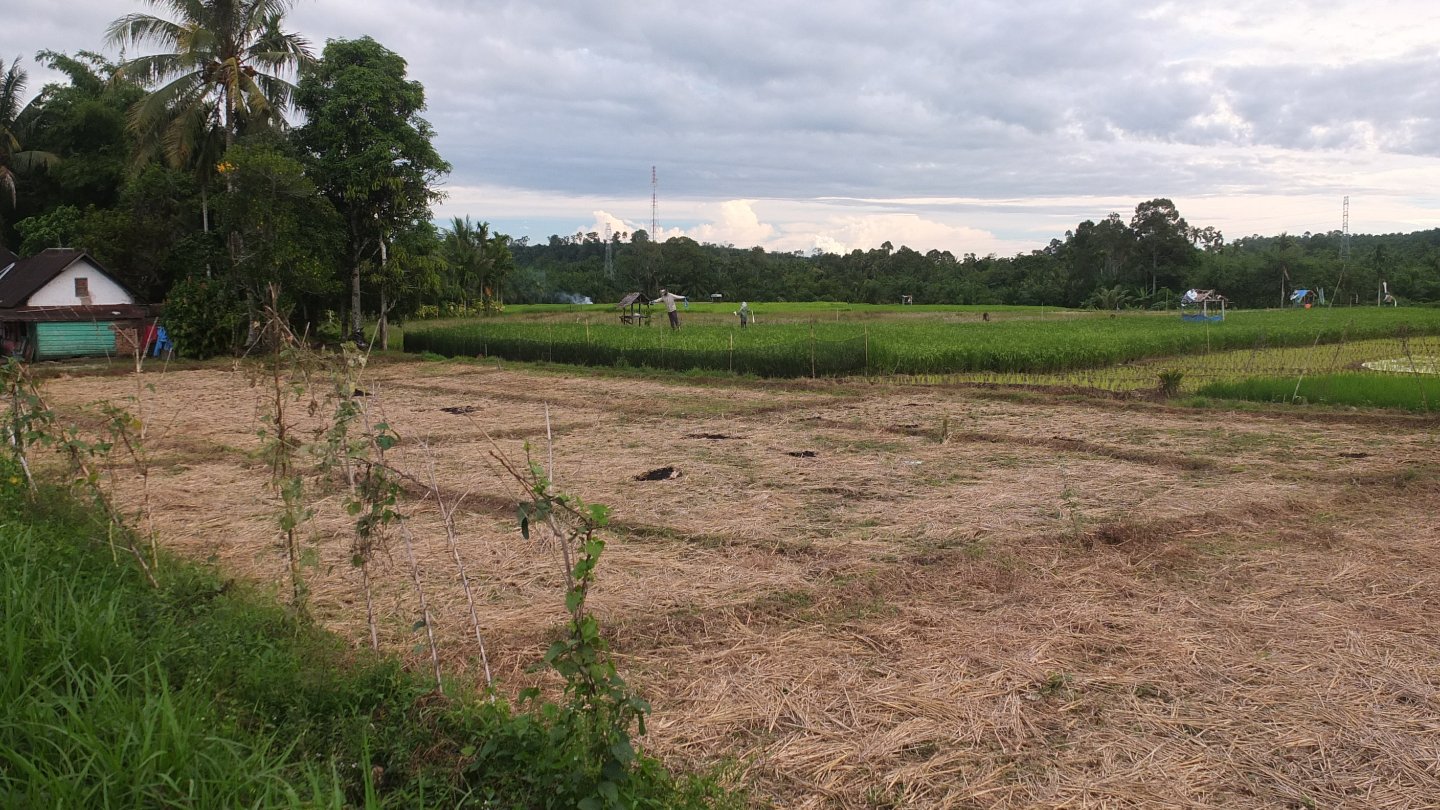 Few scooters on the way waved their hands at me and during I was climbing a steep hill some guys I’ve seen previously on the road asked me to take photo with them. Ok, Ok :-) During we were shooting ourselves another scooter with two guys stopped behind us and asked for the same treatment! I’m not sure if I’m going to be on time in Dumai because these last few days I’ve never take that much pictures with people. Looks like there is not much tourists who comes in Sumatra.

Later on, as I was looking for the road where to turn off, I stopped at a warung to get some help with the direction I should take. Two women were there and told me that I was on the right road. Then a guy who were driving on the opposite way stopped next to me and asked me where I was going. I explained that I wanted to cross that mountain to get to Bukittinggi. His body languages make me understand that the road I want to use is very rough. Well, I’ve done some rough road already so if I have to push again I will. The guy left and I stayed a bit longer chatting with the two women. They asked me if I wanted a drink. Firstly I said now because I did not want to spend more money and I have some water with me already. But they insist and offered to me! Thank you! I finally left the place, decided to not come back from where I’m coming. I will cross that mountain anyhow. 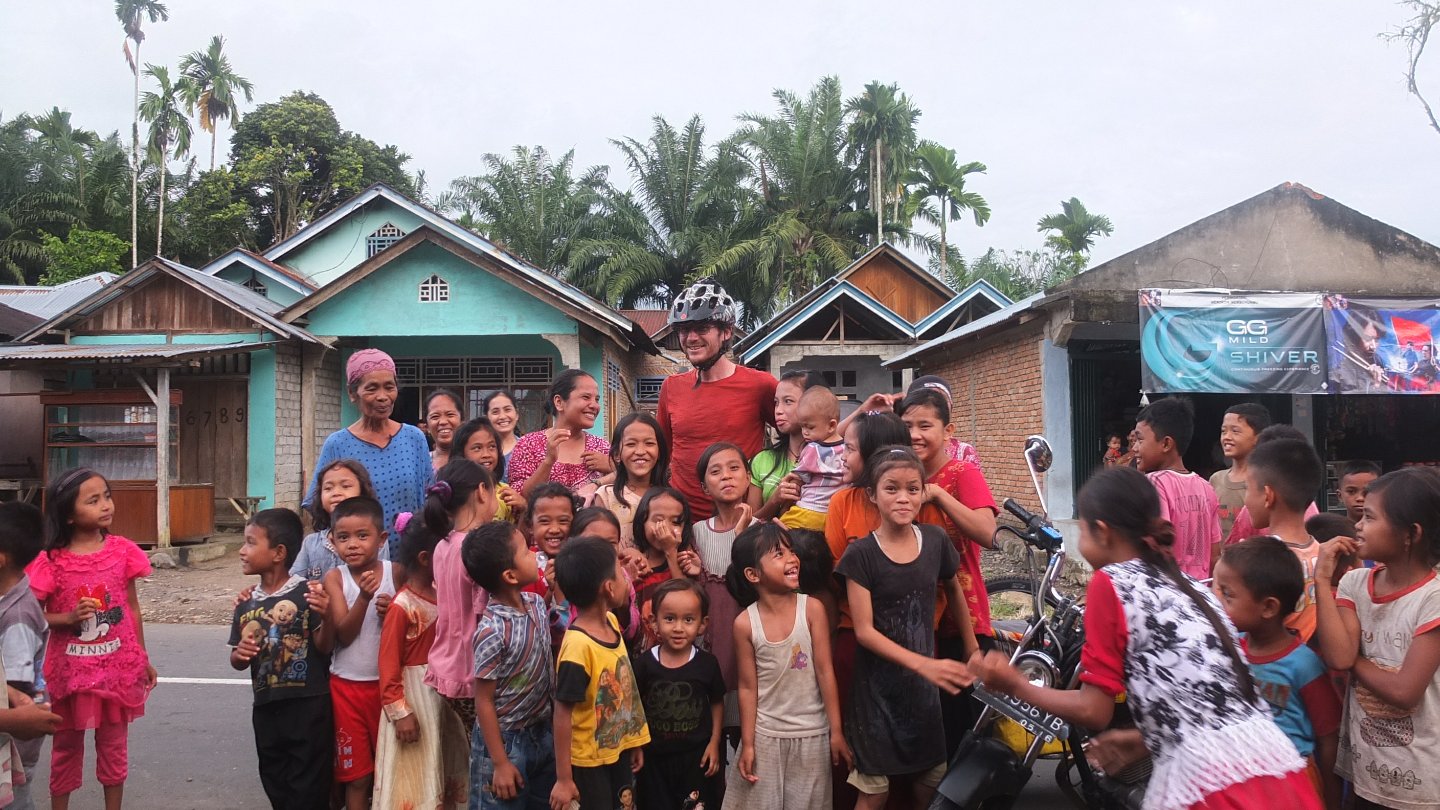 Maybe 10 minutes later, I was cycling on a tiny road in a kind of long village. So many people were outside their home and said politely hello to everyone I could see. A guy who was on the side of the road, asked me to stop. We had a chat and only few second later, dozen of children surrounded us! And more were coming! 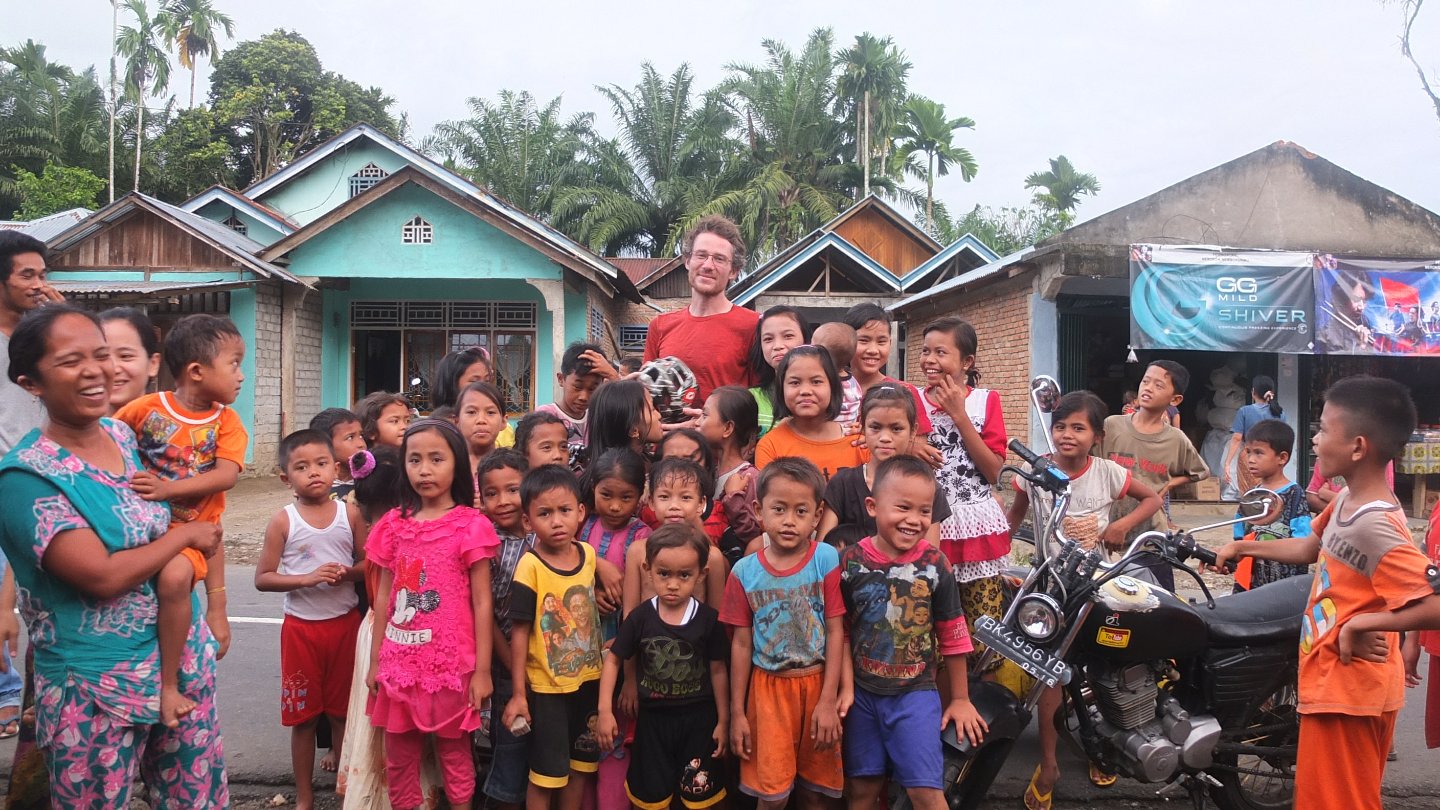 The guy’s name is Mr Reza has he describe himself. He speaks a bit of english so the communication is not as basic as if I would use my 56 Indonesians words ;-) 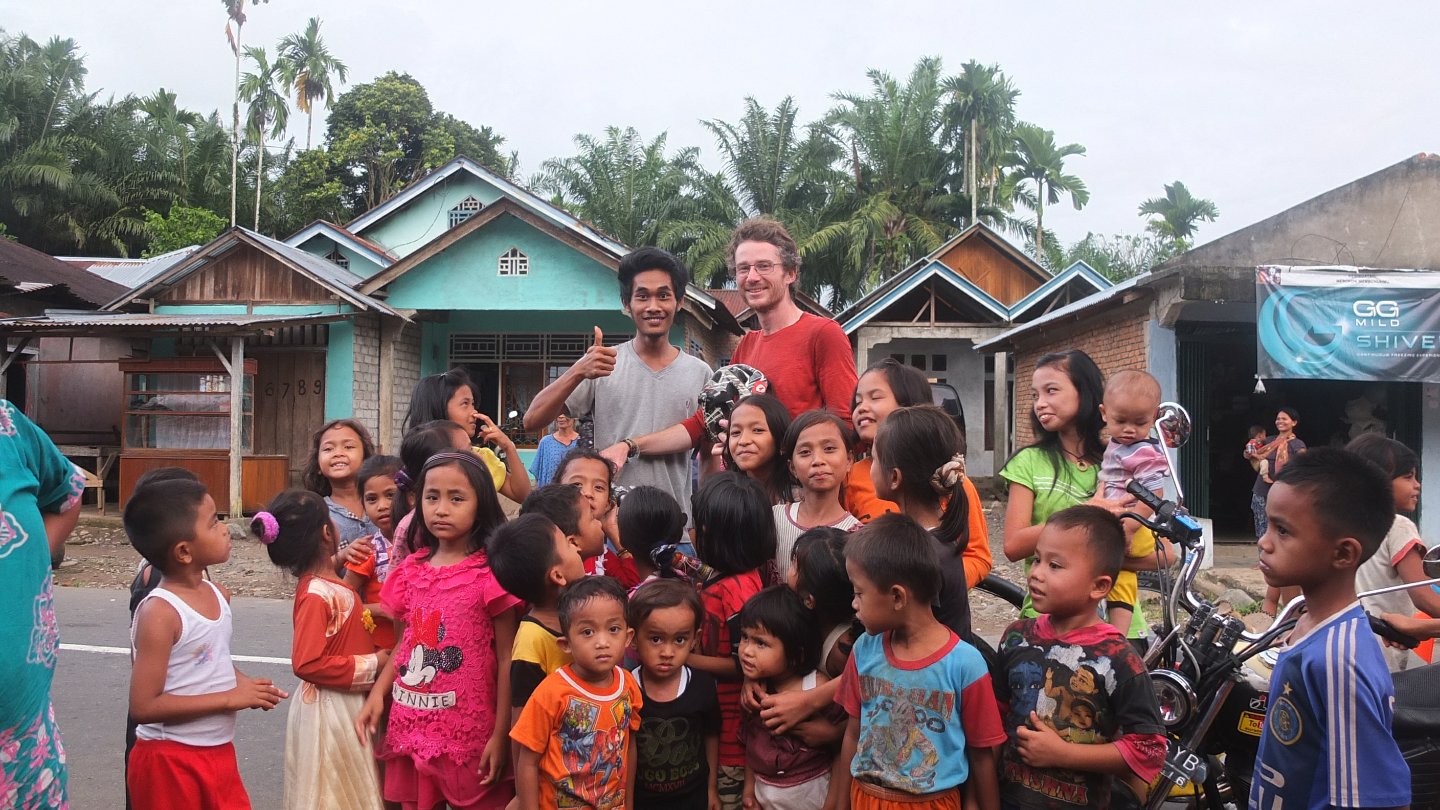 More people and neighbour came around to be in the frame of the camera :-) 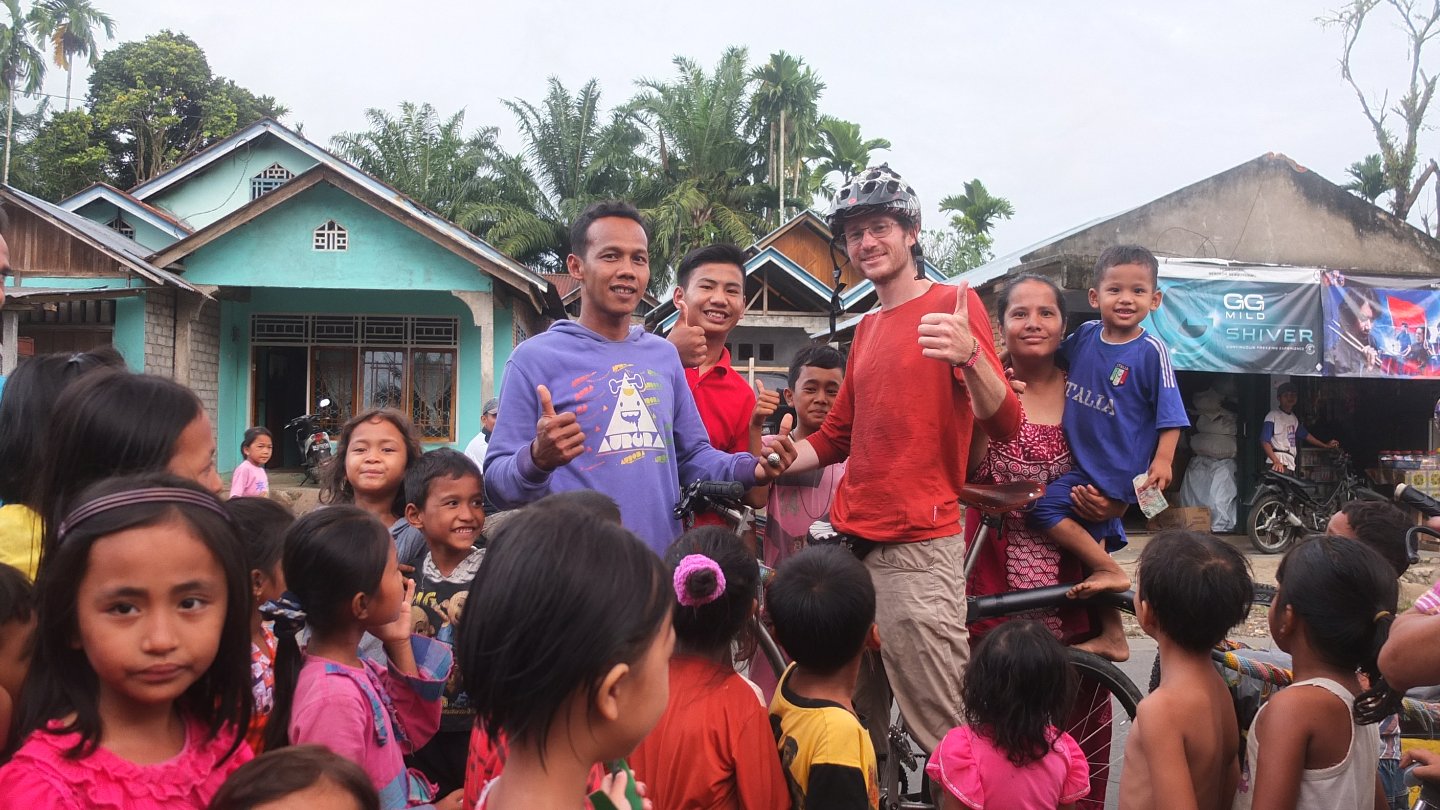 Finally Mr reza who was the photographer until now did a photo with me :-) Well with us! hahaa. 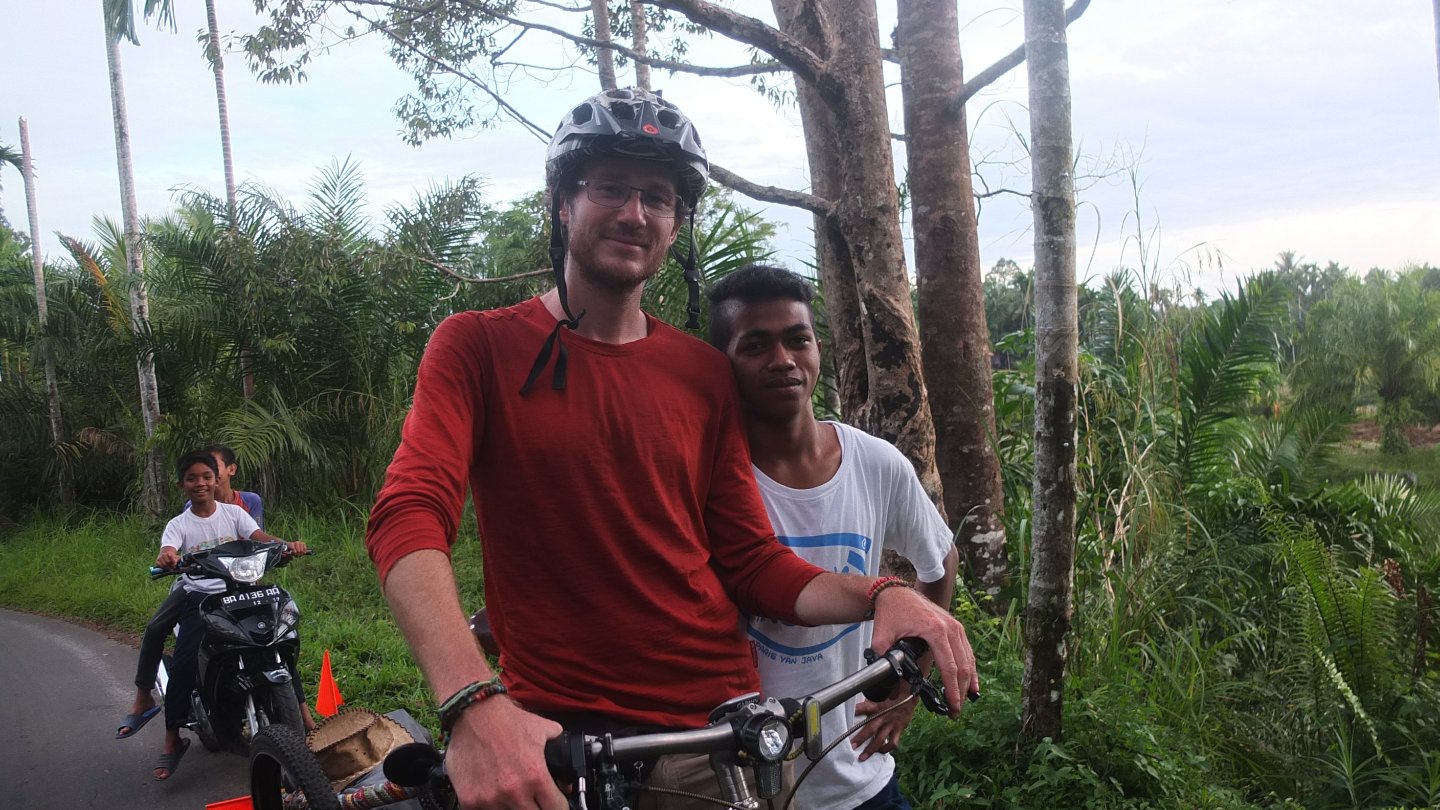 I left the village slowly, the children were running behind me and laughing at the same time. They really seems to enjoy seeing a white fellow like myself cycling in their country. I think they even respect that. This is why I don’t have to worry about my stuff or anything else. People are so nice in this area and certainly in Sumatra in general. So I kept cycling and could hear that I was followed by someone until two guys stopped me again, asking me for more photos. They could not get in the frame previously and really wanted to apparently. So I had another short break :-) 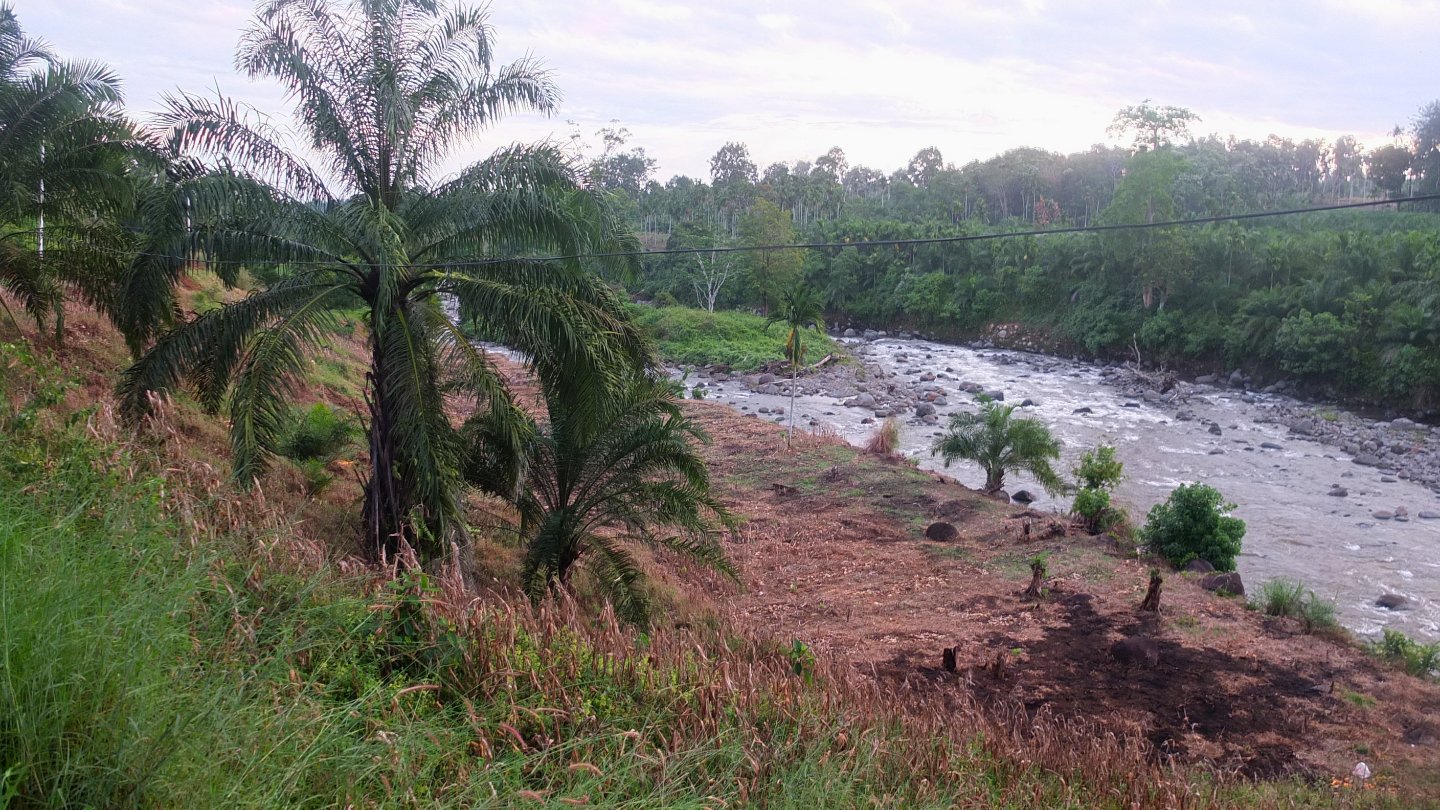 Few! What an experience here! 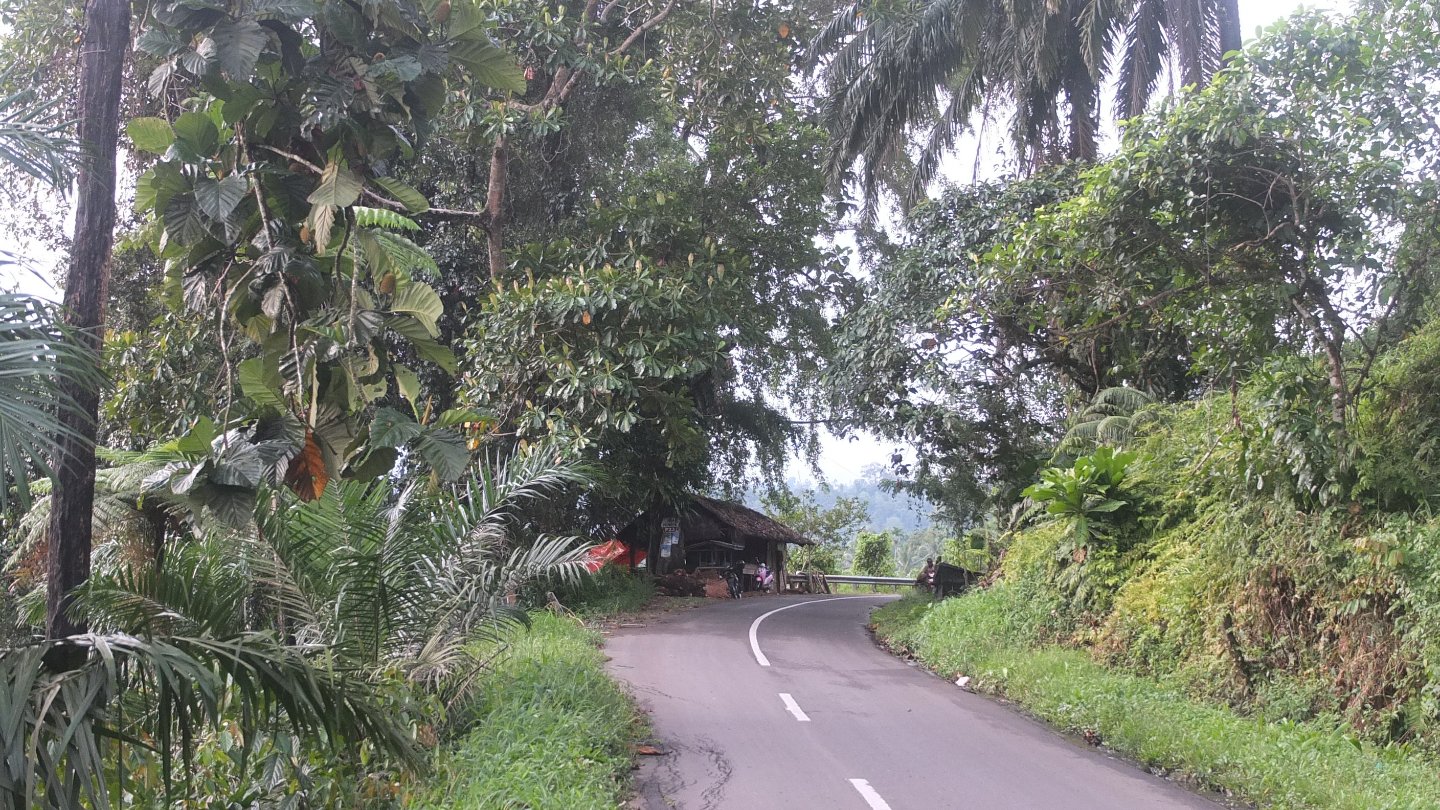 The road becomes quiet again, well there is still scooters and trucks driving around of course. 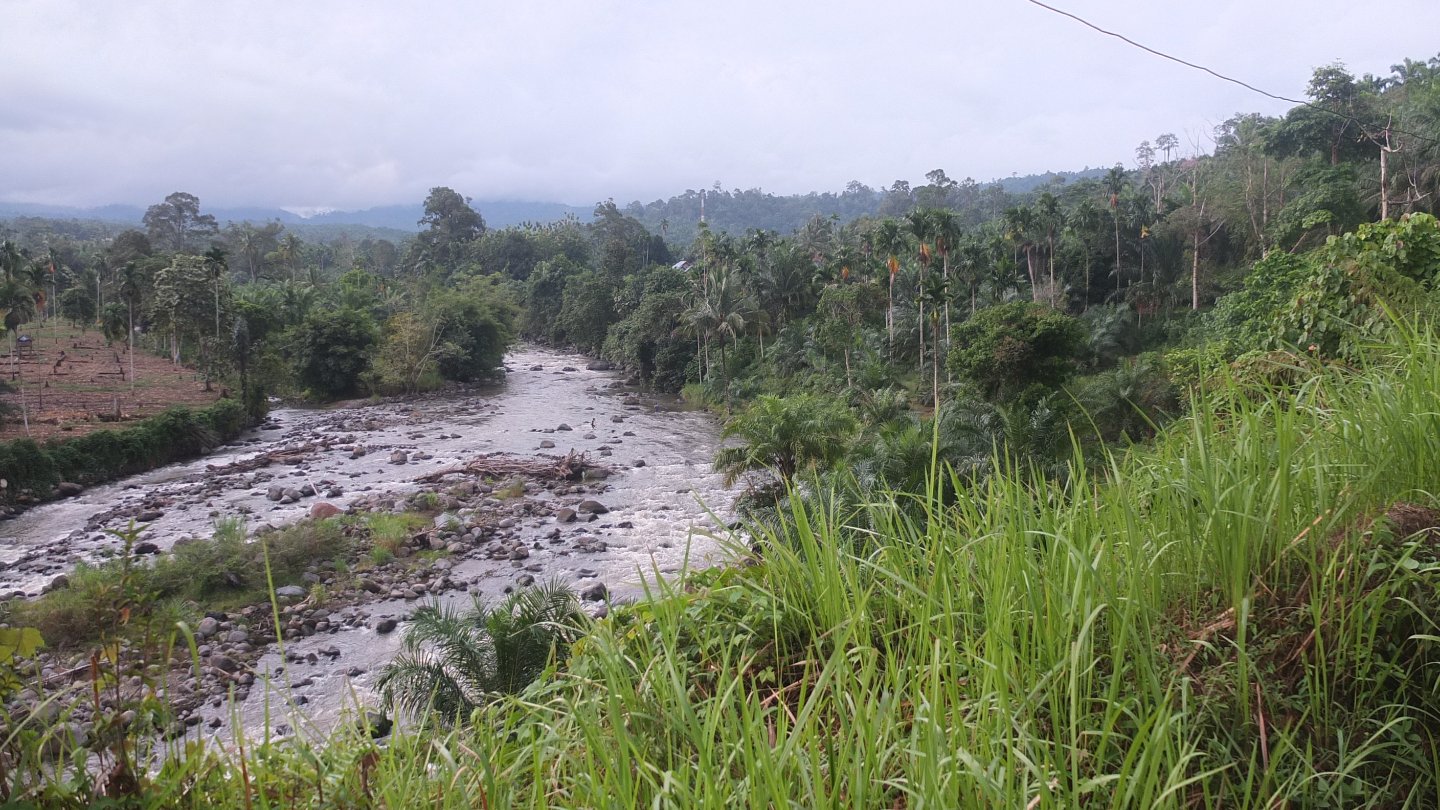 That’s a big river and I have no idea what would be its name. 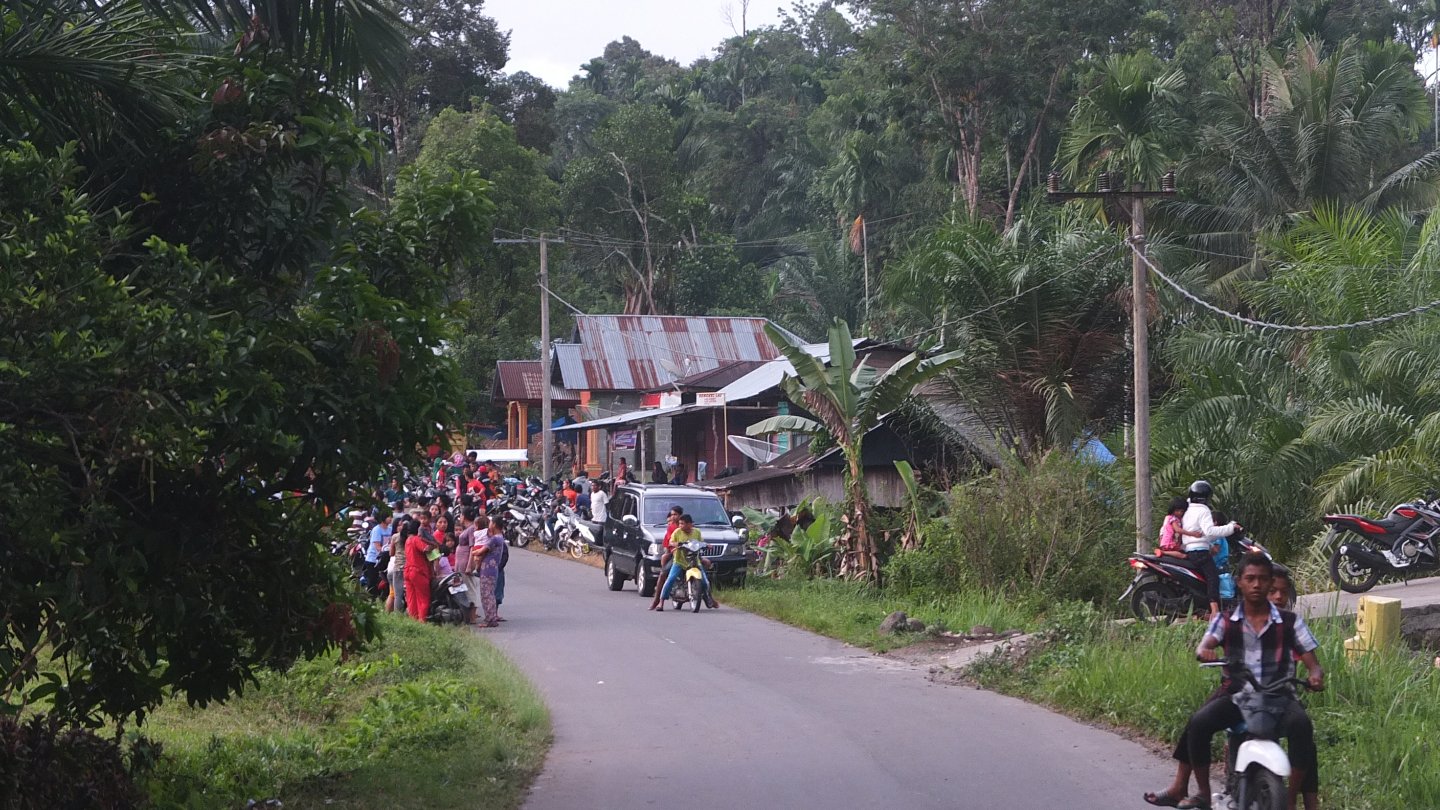 Ho ho hooo, what’s going on other there? Maybe I should stop before to know where I am going. Let’s have a short break. 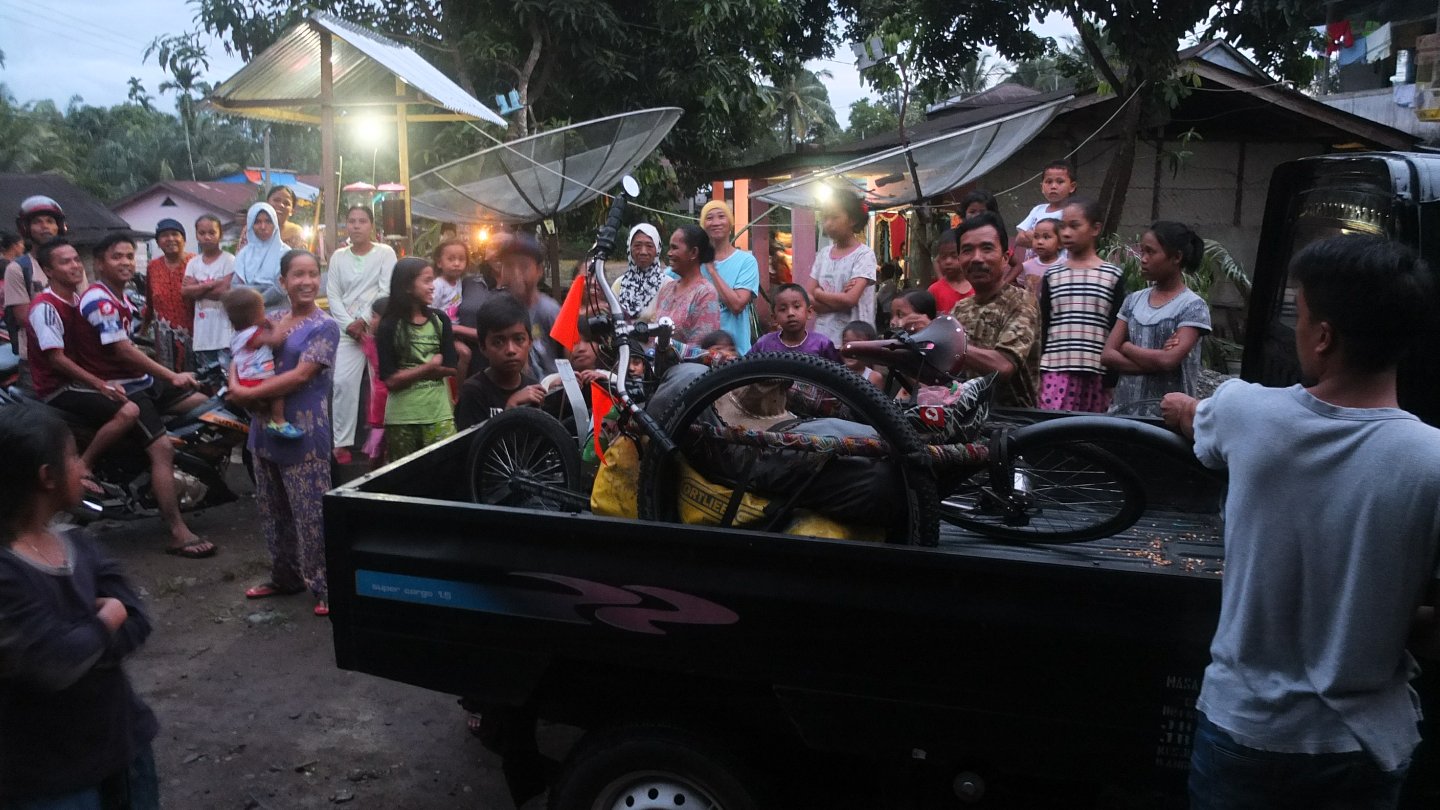 How did that happened? I’ve stopped for a minute and asked to a guy if I was on the right road to cross the mountain towards Bukittinggi. Seconds later only, the same crowd arrived from all around and looked at me. From what I could understand, the road I want to take now is rough (as said the previous guy who stop earlier today to tell me the same thing). I tried to know how rough it is but I did not get any more details. The guy was kind of worried about me. “It’s dark, do you have a torch? Where are you going to sleep? in the forest? You are not scared? the road is really rough you know”. The guy offered me to drive me on the other side. I thought about that but “Berapa?” (How much money you want?) He said that I choose the price I want. Well, maybe he is right, maybe I should follow him. 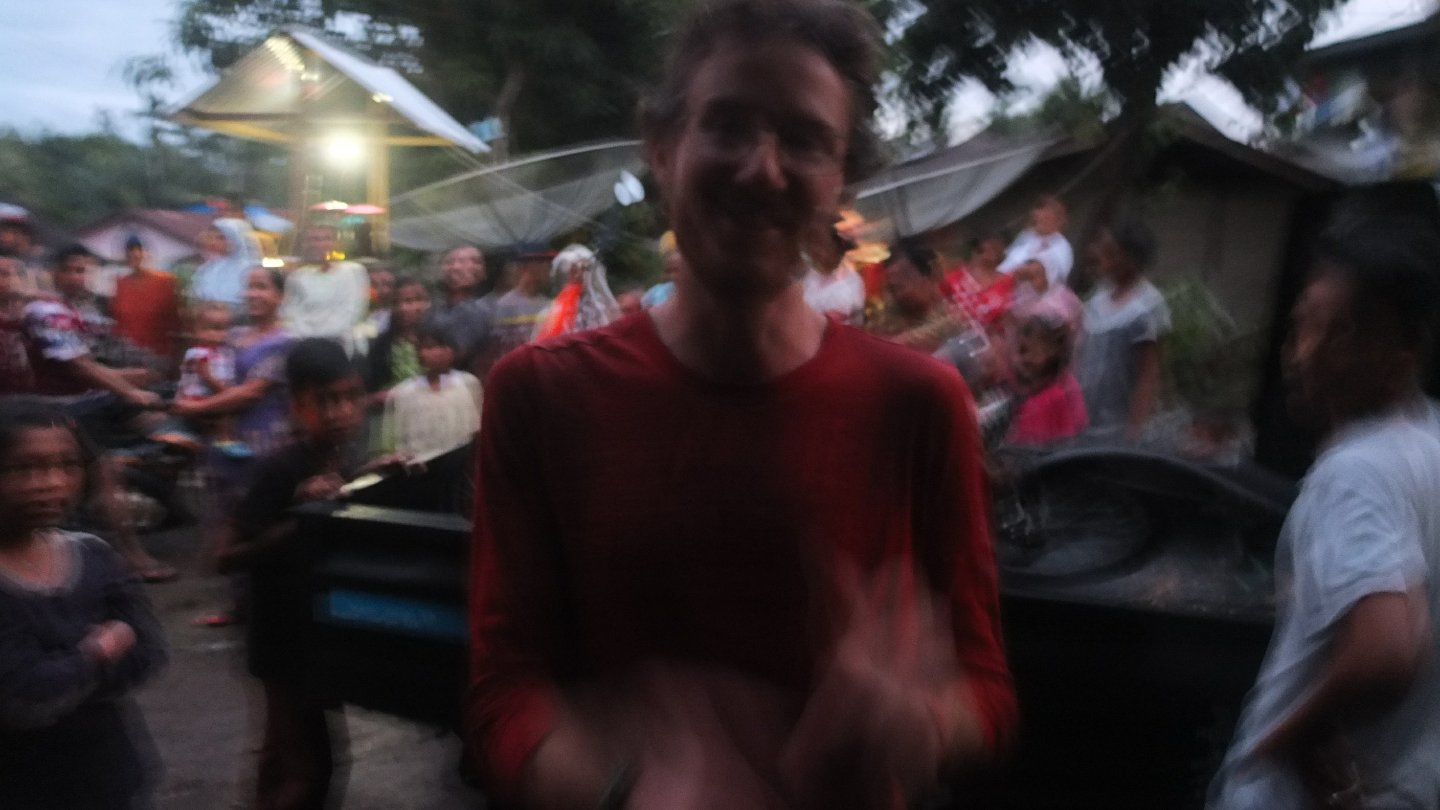 Finally I’ve decided to drive on the other side using his truck. Another guy I was talking with took a picture for me but well, it a bit blurry :-) I keep it for the souvenir.

The bike and trailer were safely fixed at the back of Masri’s truck and 10 minutes later we started driving at night time. We were three in the truck, Masri, his son (the driver) and myself. At the beginning, the road was really okay and I regretted a bit to not be able to cycle it. But 10 minutes later this is where the rough road started. Unfortunately I could not take any pictures as it was too dark. The road was full of holes and big once. I would have struggle a lot by pushing my bike here. I guess I would be able to do it but it would be hard. His tiny truck is not a four wheel drive at all and once Masri and I had to go out and seat on each corner of the truck to put weight on the back wheels because we were stuck. But it seems completely natural for them to do this. The road was rough but we were far to be alone! Big trucks were driving here at night same as scooters and other four wheels drive cars.

By the way, we crossed the equator that night :-) I’m back in the north hemisphere!

When we got to the other side I gave 100.000 IDR to Masri and he was very happy with this. As I said I was sometimes going to Pertamina gas station to sleep he indicates me the next one which was 10km away. I’ve got my super light so it won’t be a problem to get there even at night. Most of the way was downhill. I stopped once to get some dinner then reached the gaz station. I thought about sleeping there but it was dirty and the rain started to pour. I used the toilets and came back on the road to find a spot for the night.

During I was cycling slowly through a tiny town, a guy shouted at me if I wanted to have a coffee or something. I said I was looking for a place where to sleep and did not want to drink now. I was tired. A woman came out of the warung, She was speaking a bit of english and shouted back to the guy what I was doing. They discussed for a minute and then she said “you can sleep in his home if you want”. I answered: “Thank you for the offer but I need to sleep now, not in two hours so I prefer to find my own place”. She talked back to the guy and few seconds later he also came out of the warung. The woman told me again “That’s ok, you can sleep now at his home”. This is how I met Esri, a quiet guy with long hair who without knowing me at all, invited me in his home for the night. I had a bed, he showed me where to get a wash and came back to the warung. I will stay here alone this night because Esri is going to sleep next door. I cannot say Indonesian people are not helpful! Wow!