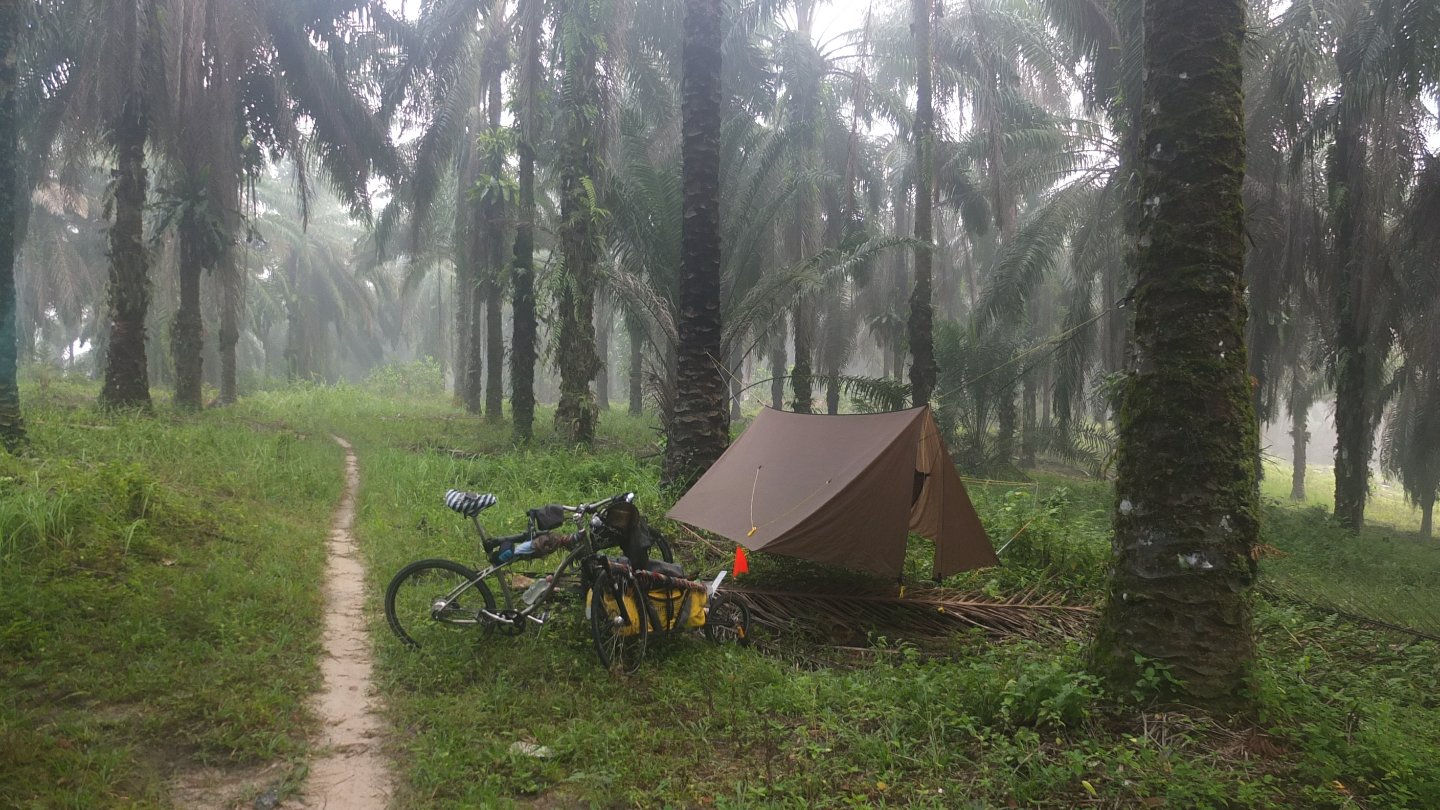 The last night was great. It did rain a bit so I was glad I’ve take the time to set up the tarp. Today has been an easy day. The road was all flat, the weather not super hot. I’ve passed through the city of Siak Sri Indrapura which has a singular style. I felt a bit like in Disneyland sometimes. Lots a huge colourful buildings and big avenues with flowers on the sides. I’ve crossed the Sungai Siak river again today but this time there was a proper bridge and it was free :-) I stopped in a warung at lunch time and around 5pm when I was ready to go a storm came up and I had to wait for a little while. Then I’ve continued my way following roughly the same river and ended in an other warung for dinner where I’ve spent the night! This is in short, the story of the day :-)

As I said, the last night in the forest was good. I was not disturbed by anyone, there was no music around neither mosques. I’ve heard some animals walking around but that’s all. 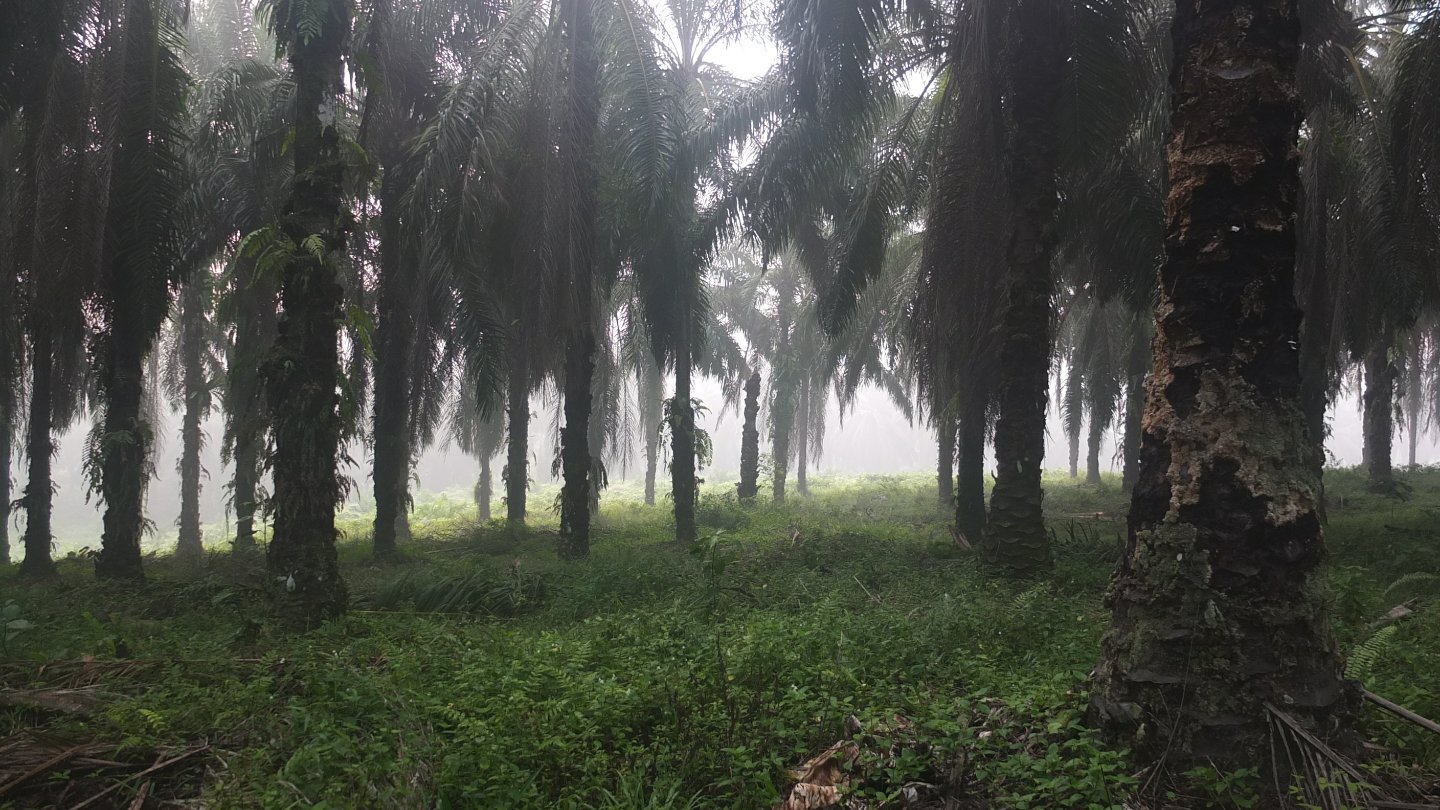 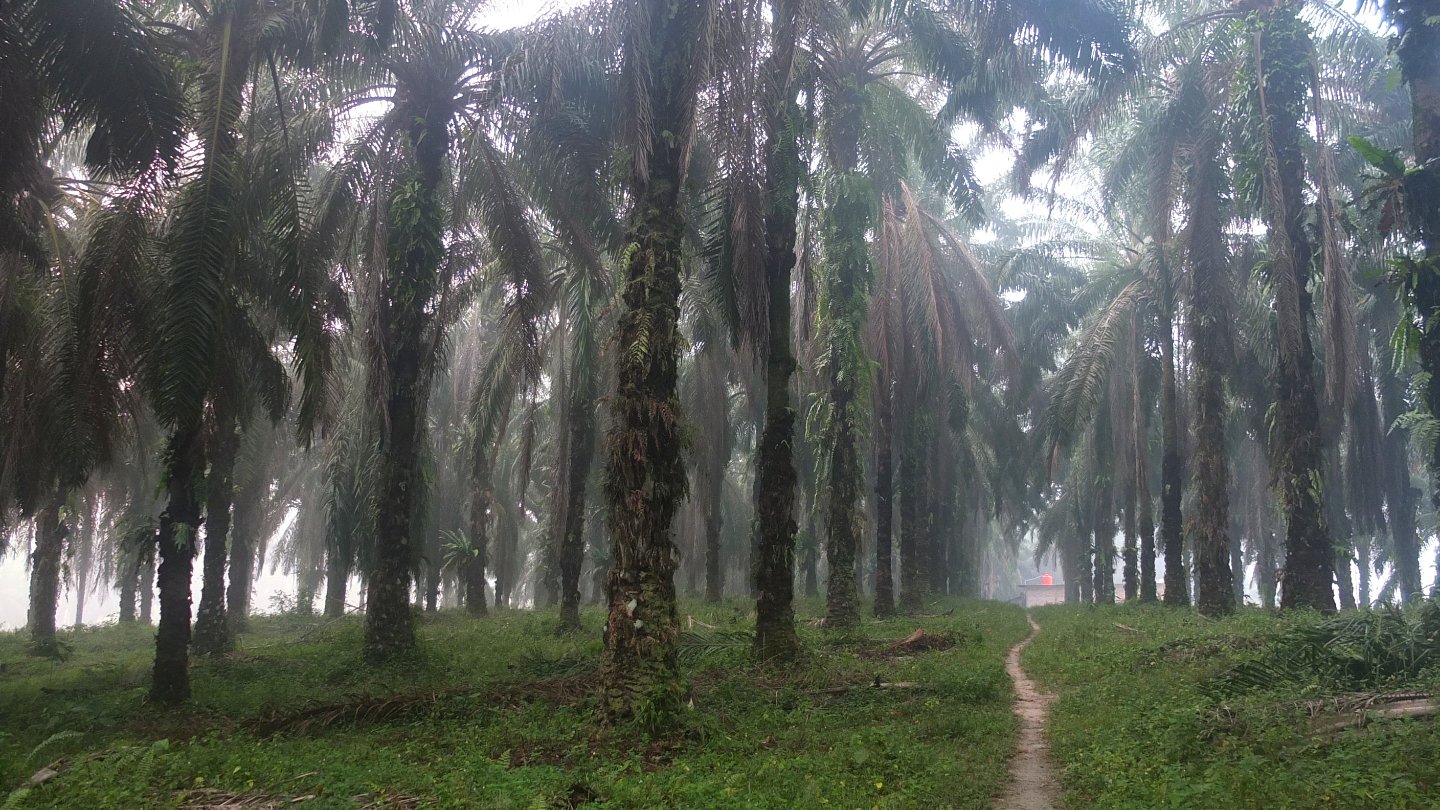 A path is heading certainly to a home or the company which manage this land. I’ve no idea… 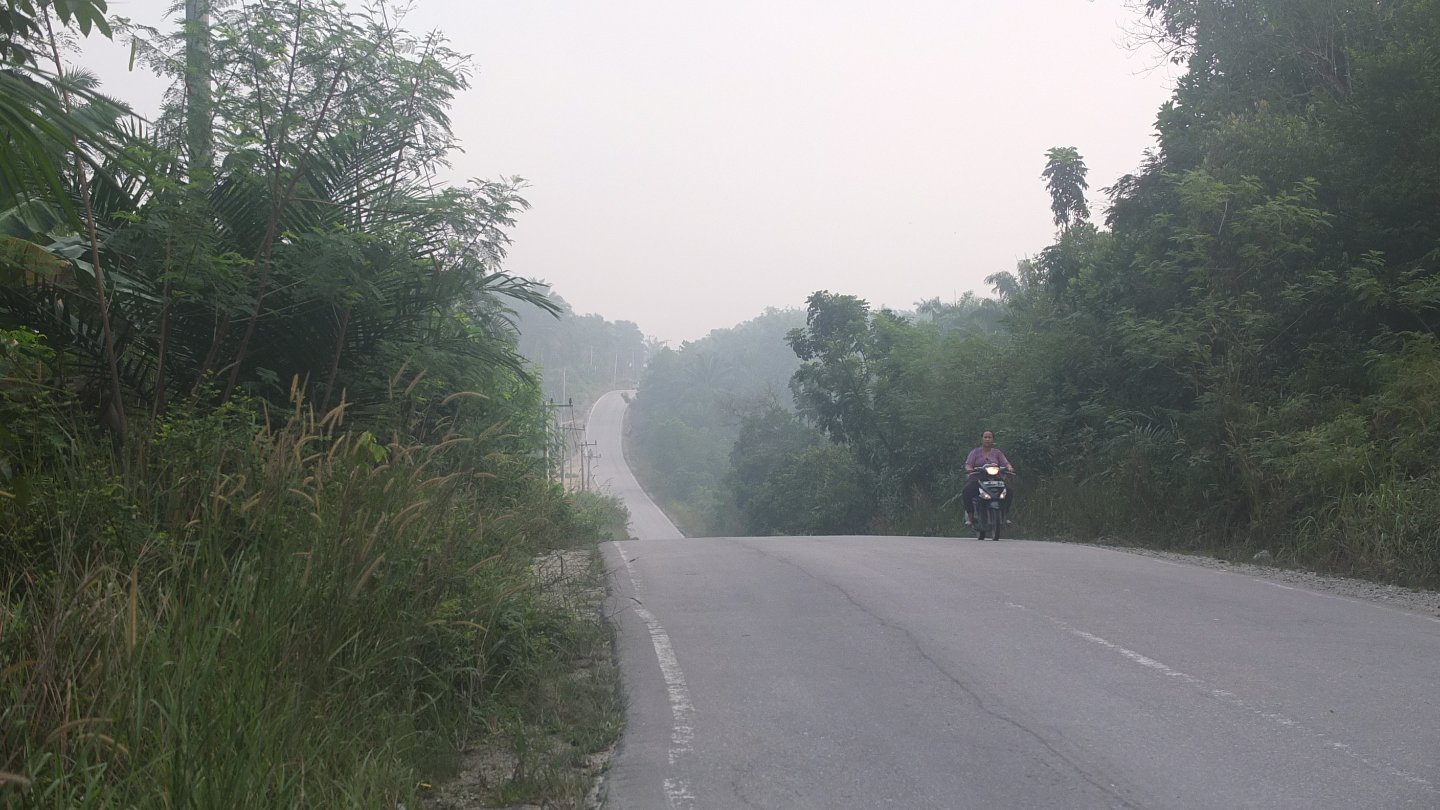 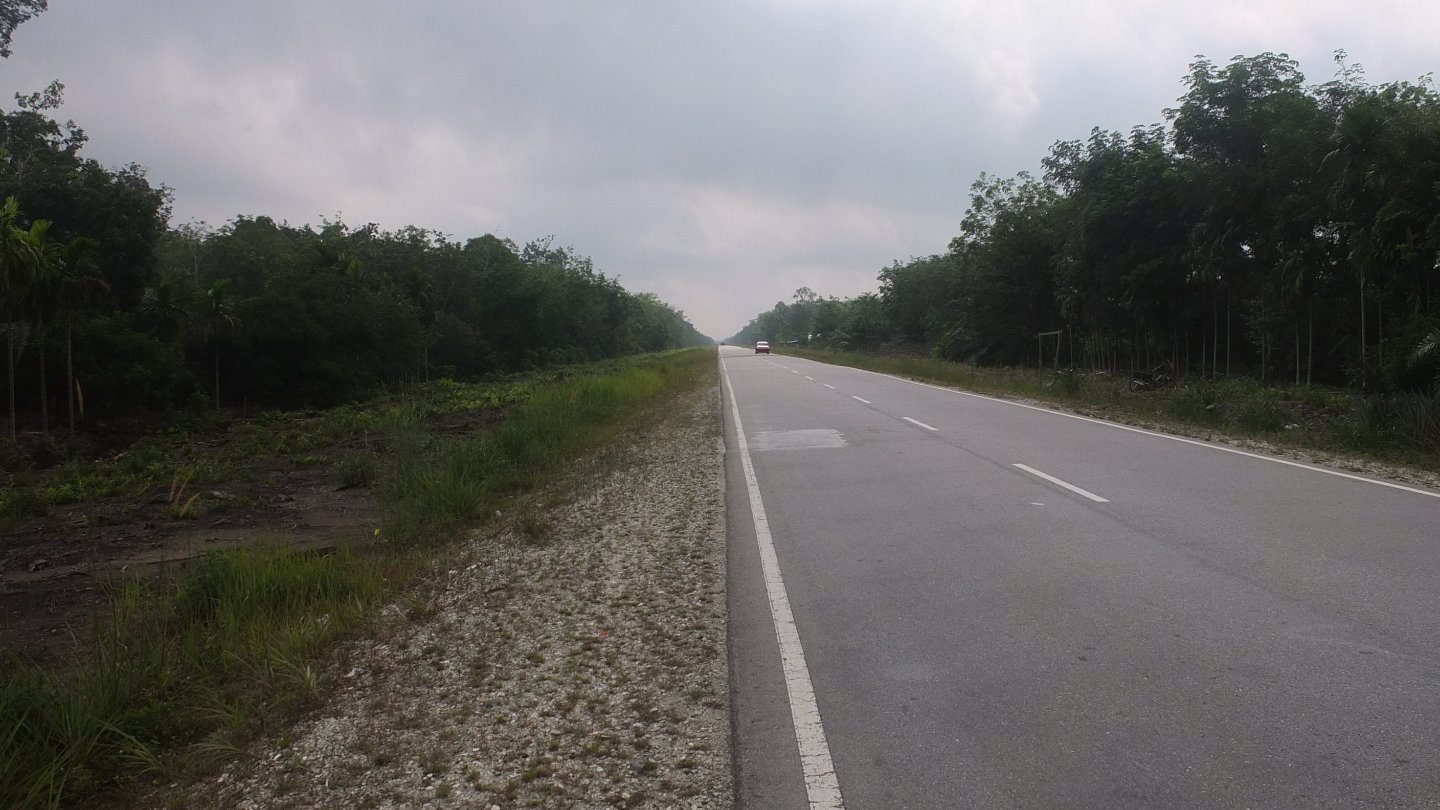 In this area, they love straight, long flat roads :-) 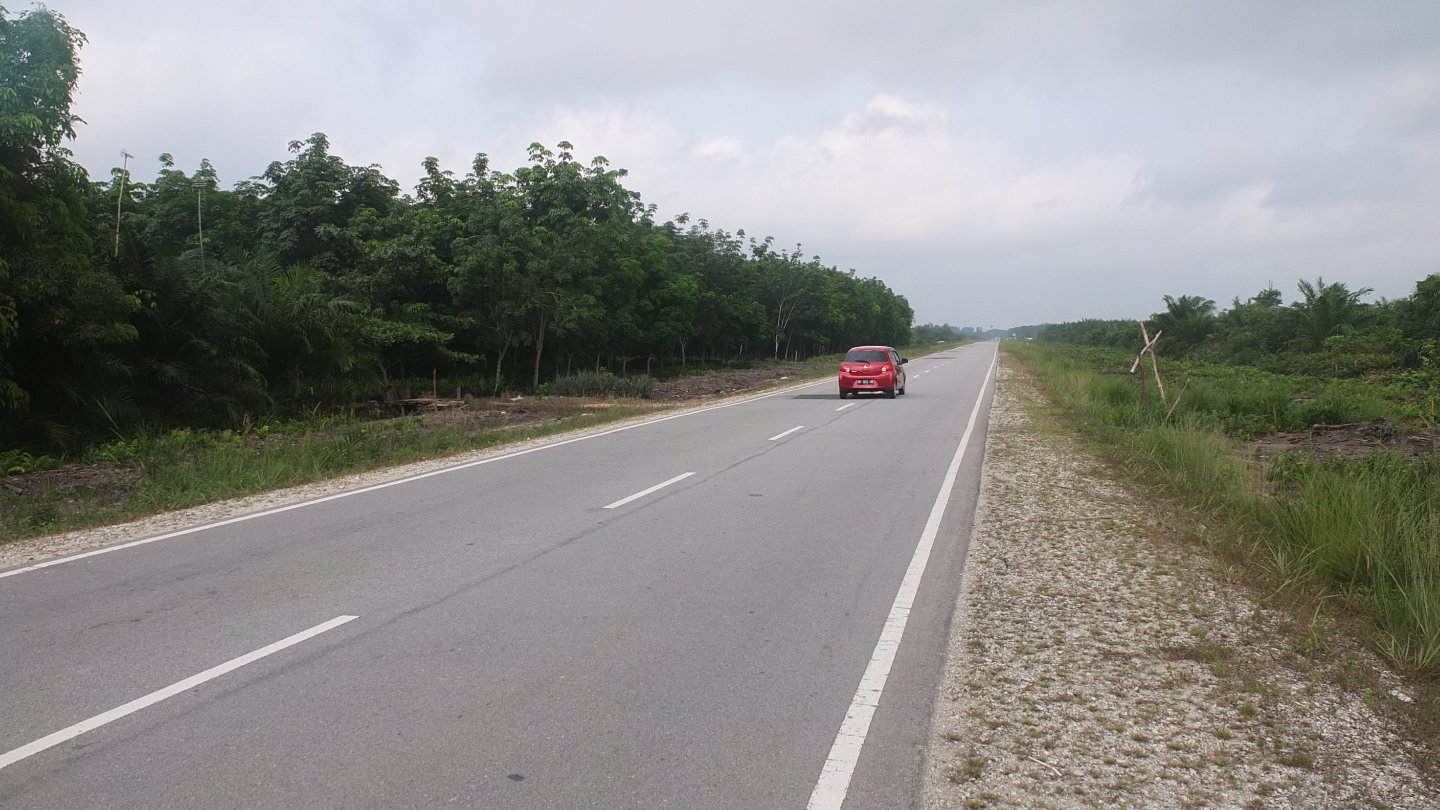 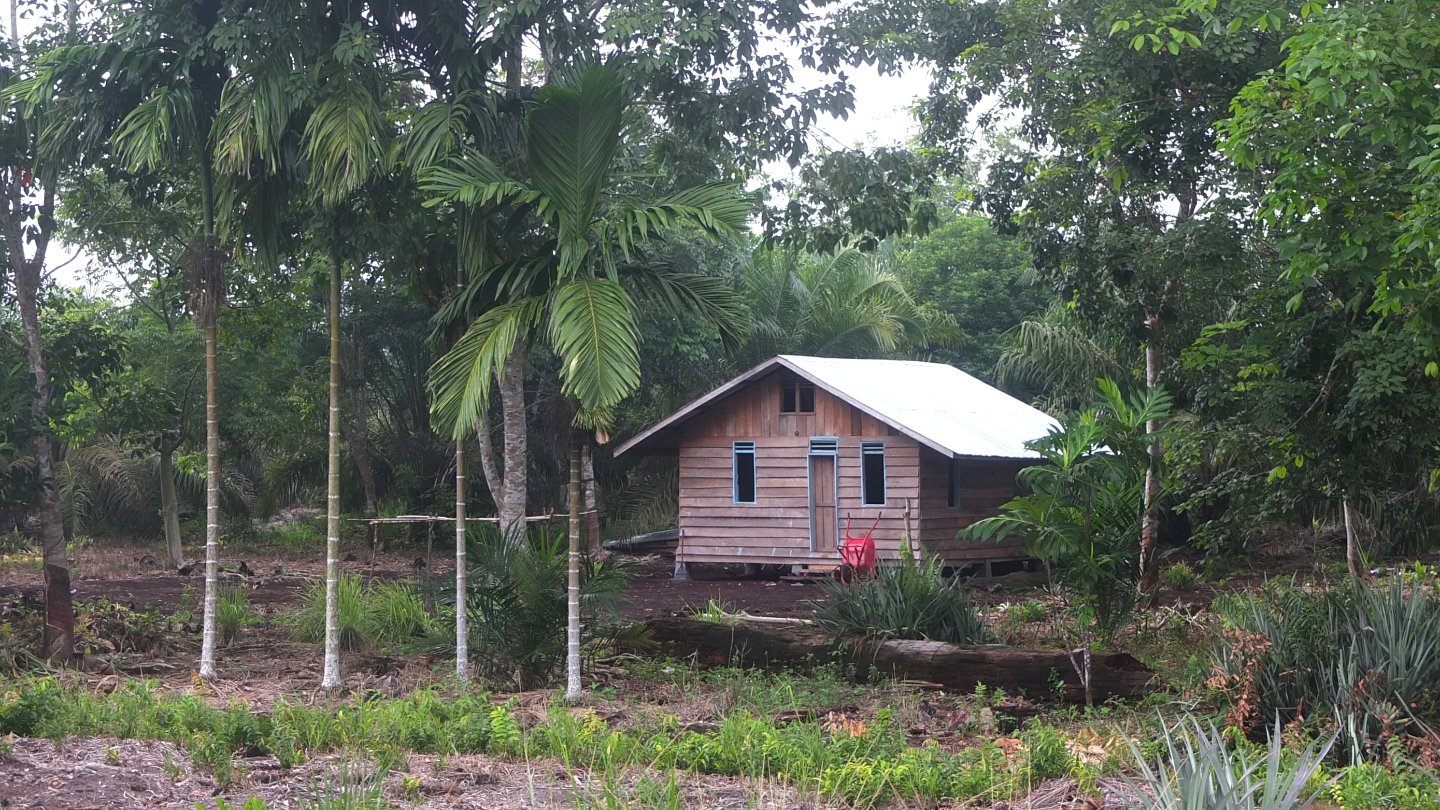 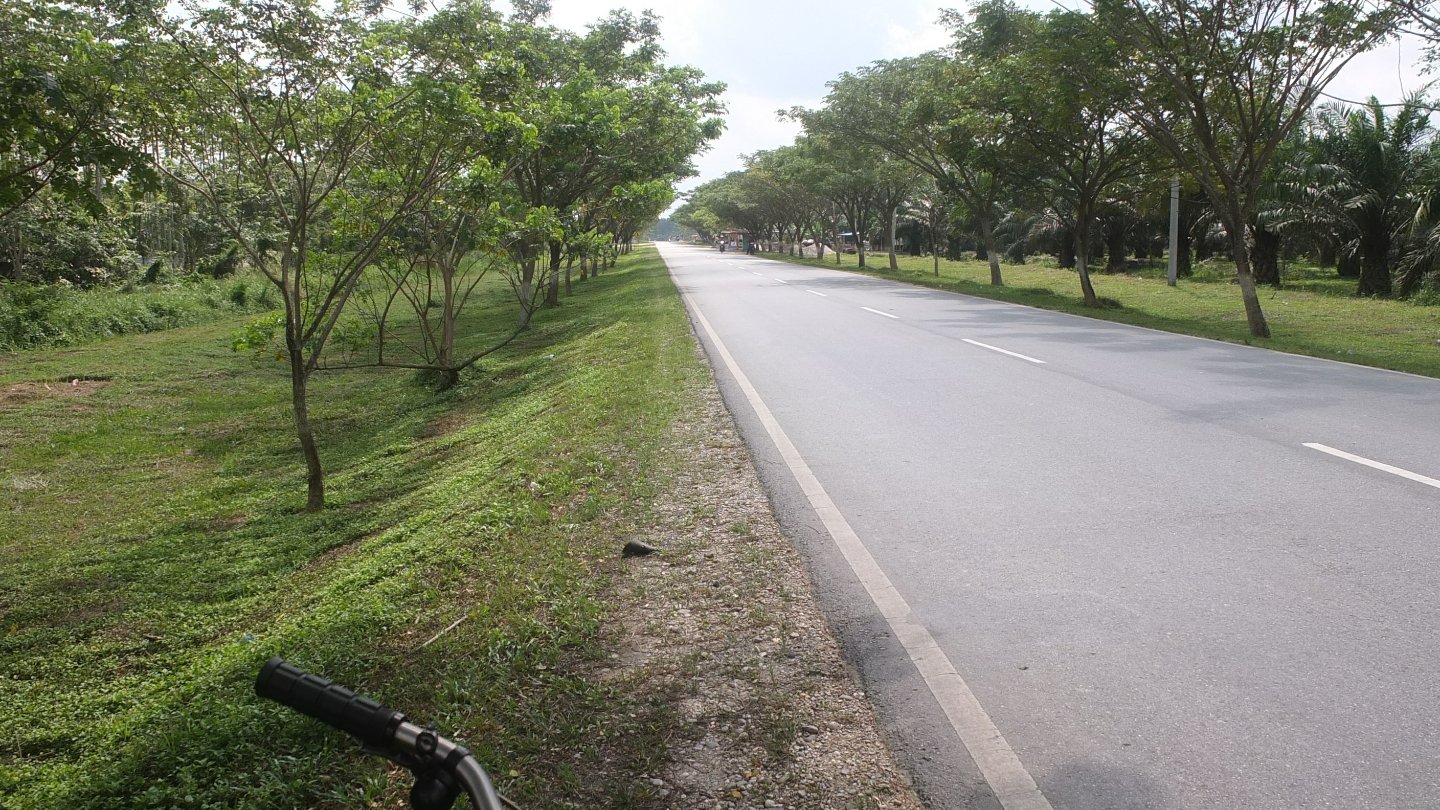 This looks quite organised around here. 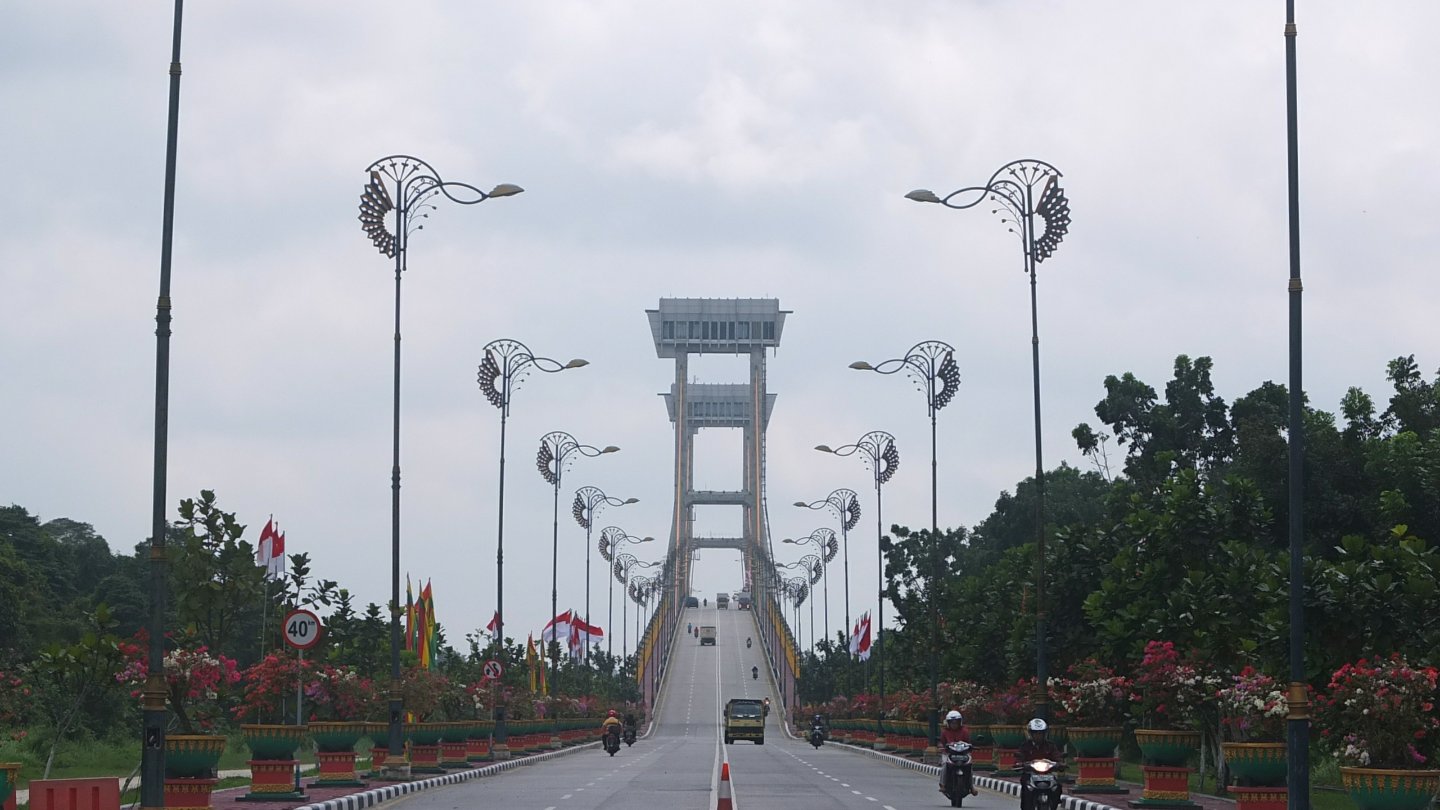 Wow! This looks even more than organised around here. I’m in a city of Siak but did not see the real city yet. I’ve seen some huge building like government buildings or huge mosques. No houses, no warungs, not much people along the streets… This is a strange place. 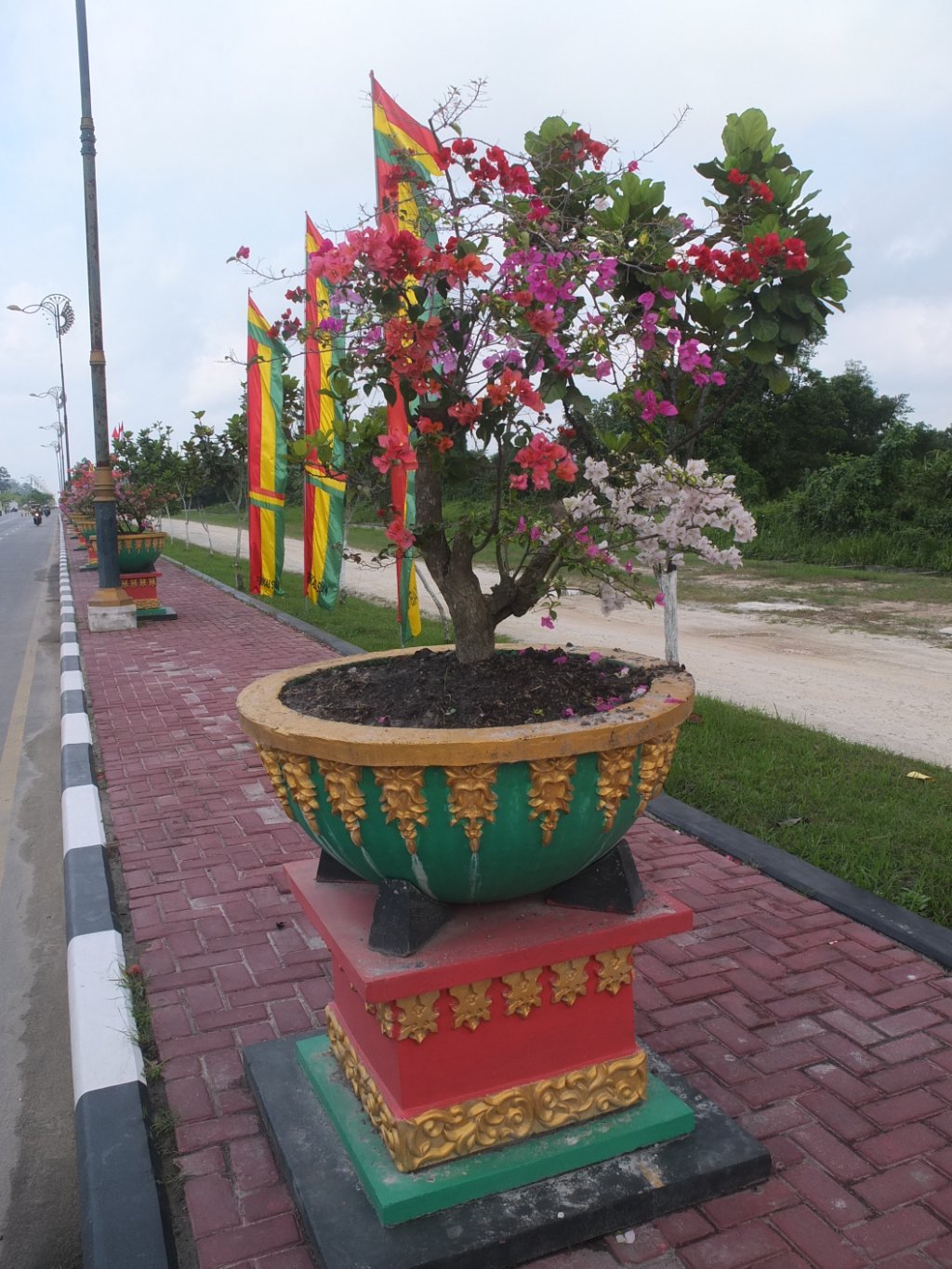 Like in Bali, there is those special bougainvillea which have 3 or 4 colors mixed on the same tree. The pot is very fancy though (like Disneyland ;-) 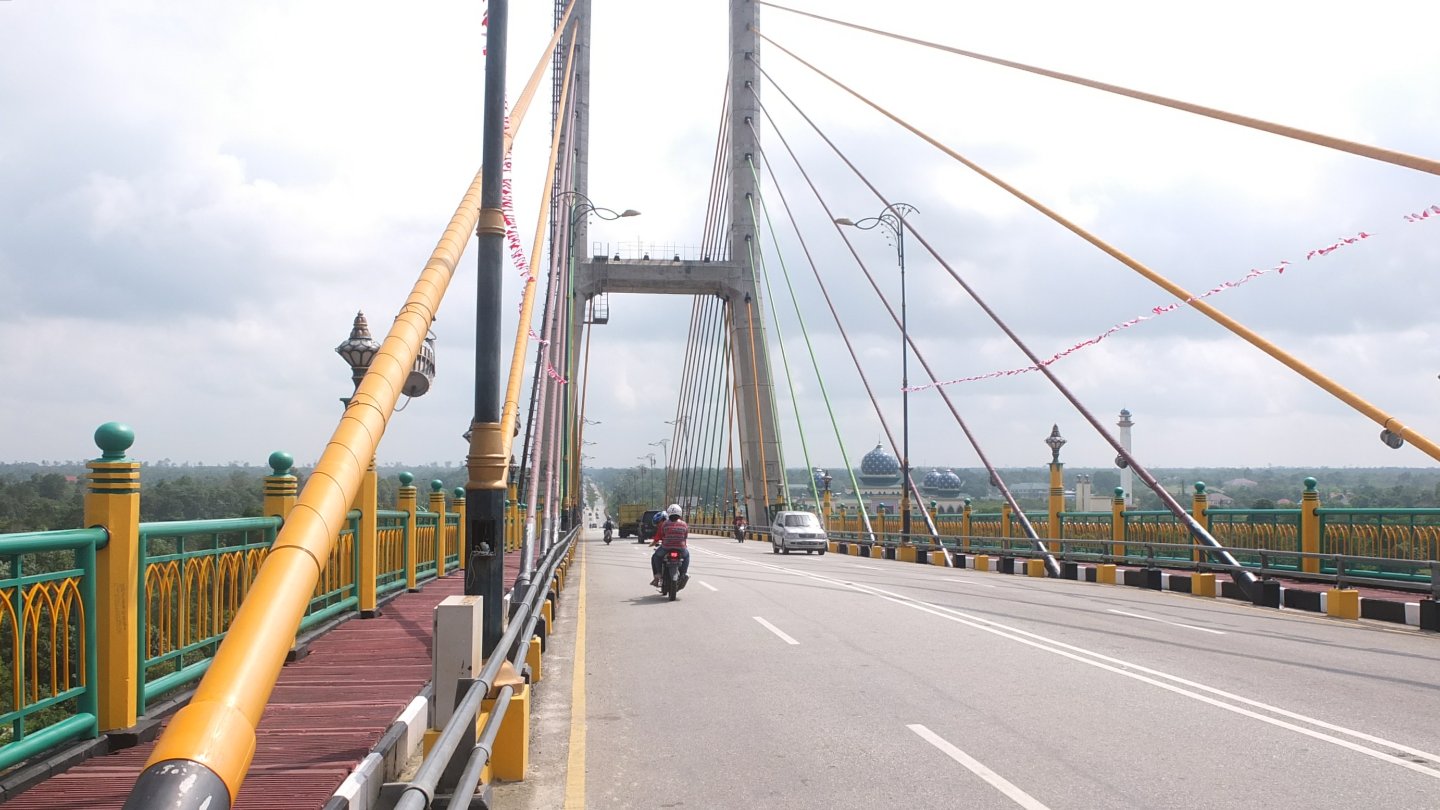 Up on the bridge! 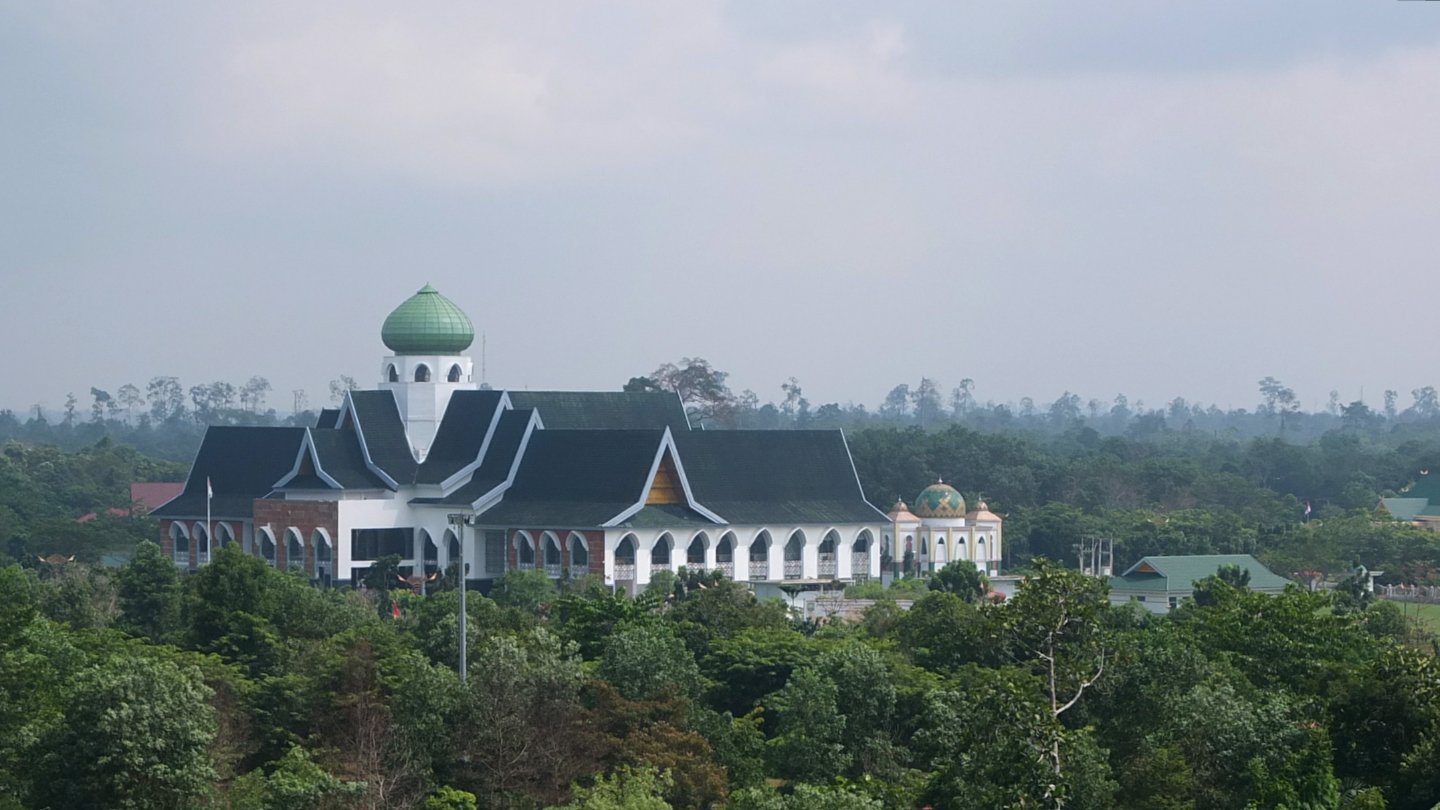 Look at the size of this construction. A mosque? Hey, there is a little one on its right hand side. I don’t know what they use it for? 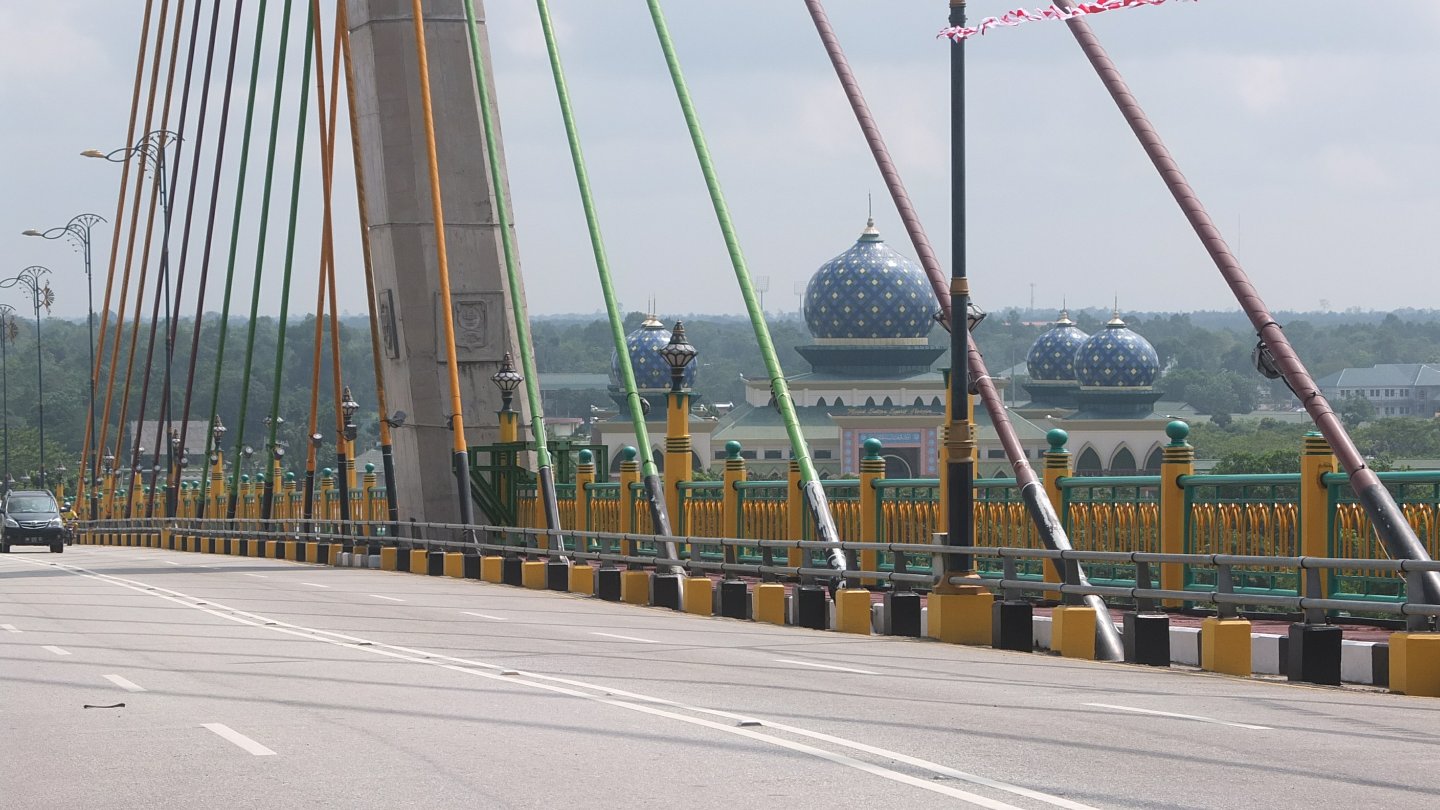 On the other side of the bridge, there is another mosque, a huge one again. Those buildings are big but no one seems to live in this area. It reminds me the city of Canberra in Australia. This is the same kind of atmosphere. 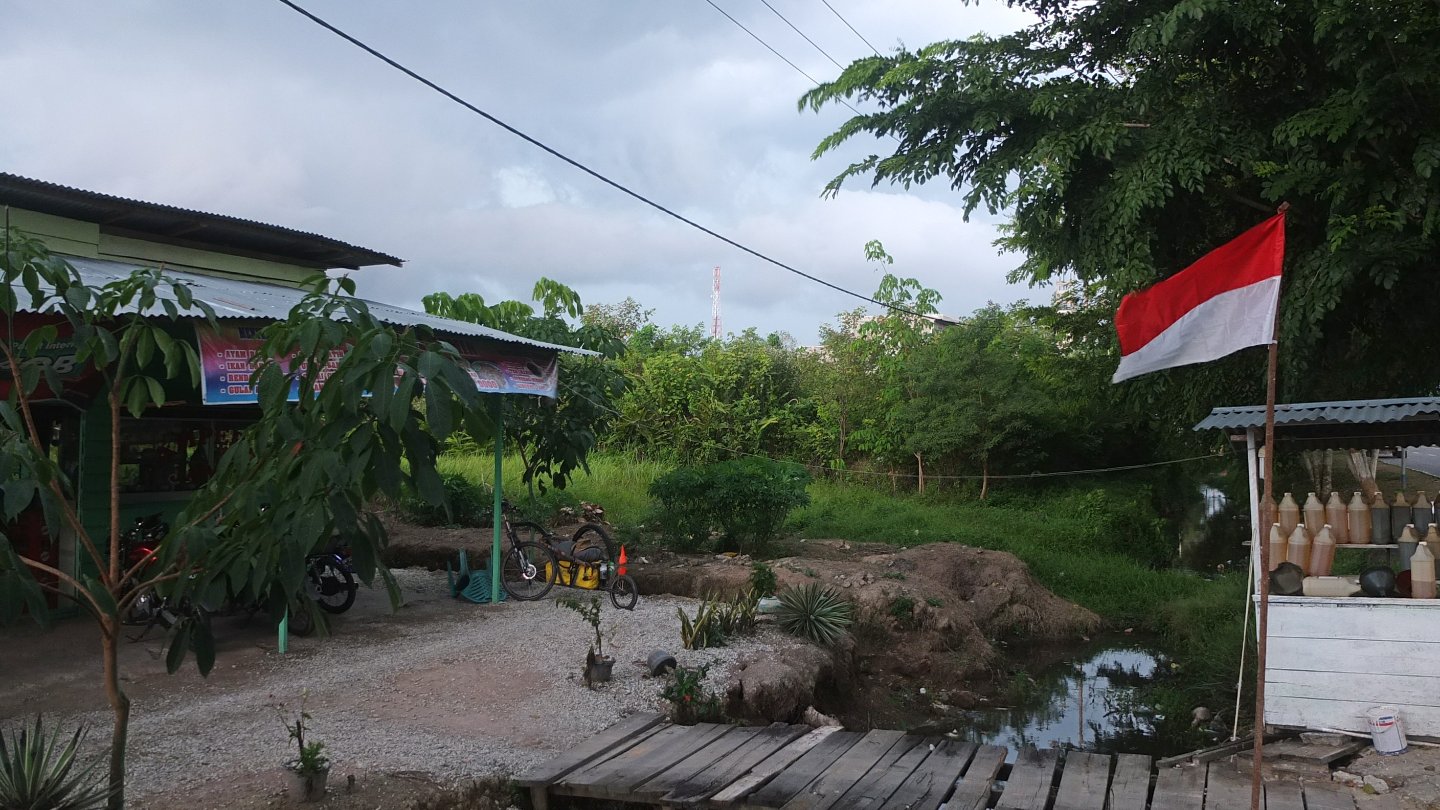 Finally I found a place where to get a rest and have some food. 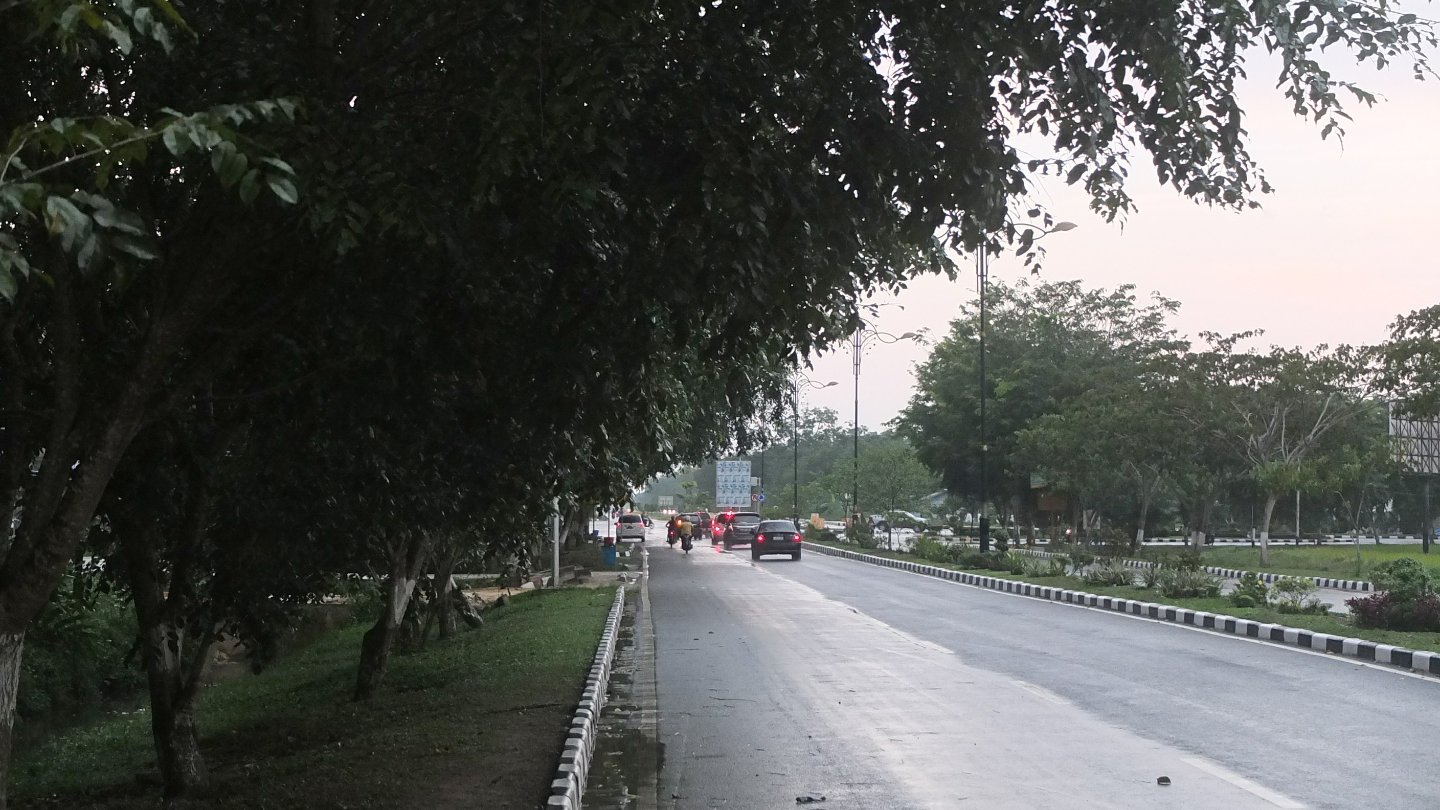 I think I’ve stayed maybe 3 hours in this Warung. I’ve ate (naturally) and wrote my blog a bit. I don’t have much opportunities to be by myself but this place was quite. Once the storm blew away, I quickly prepared myself and hit the road again. 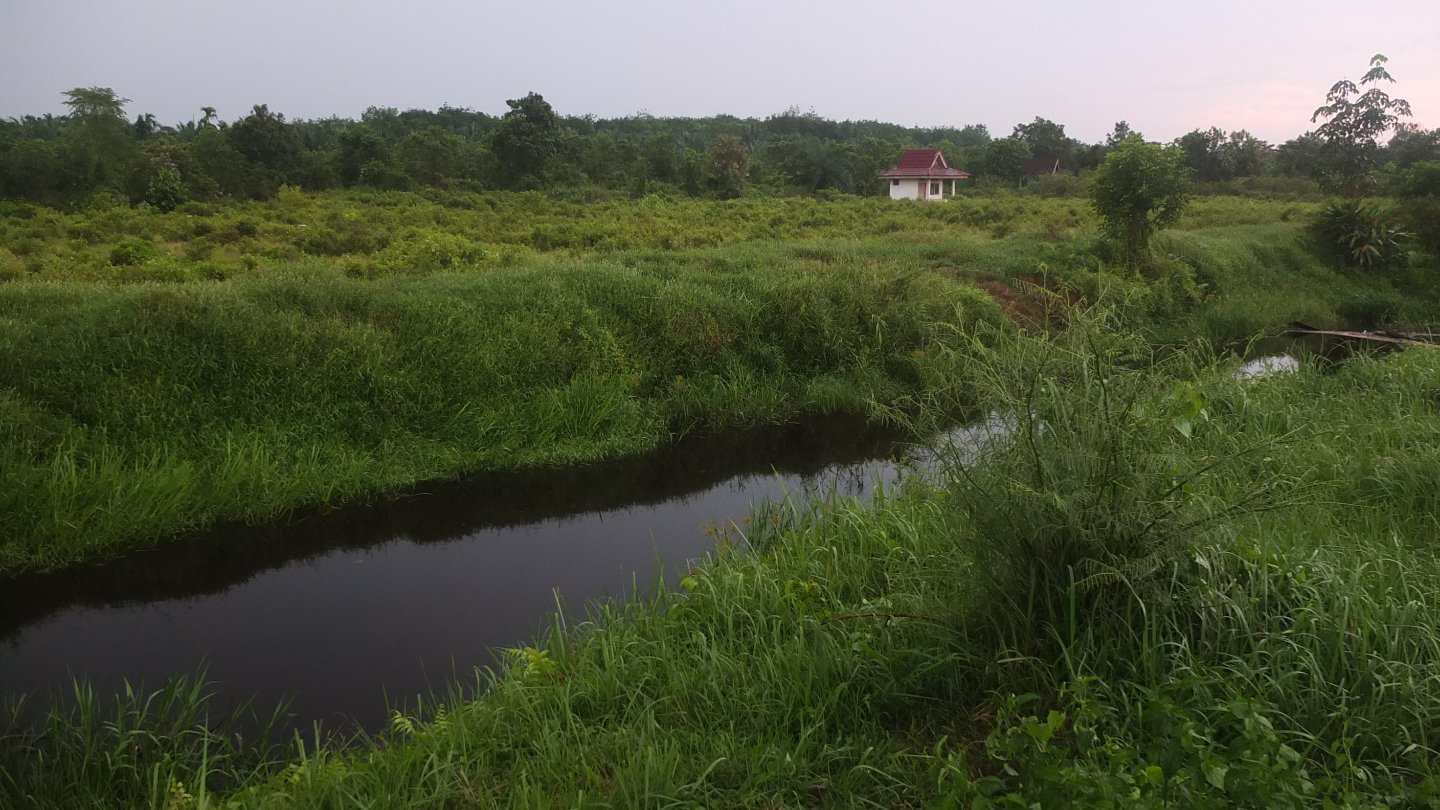 This is good now because it’s not that hot. The landscape is really green around. 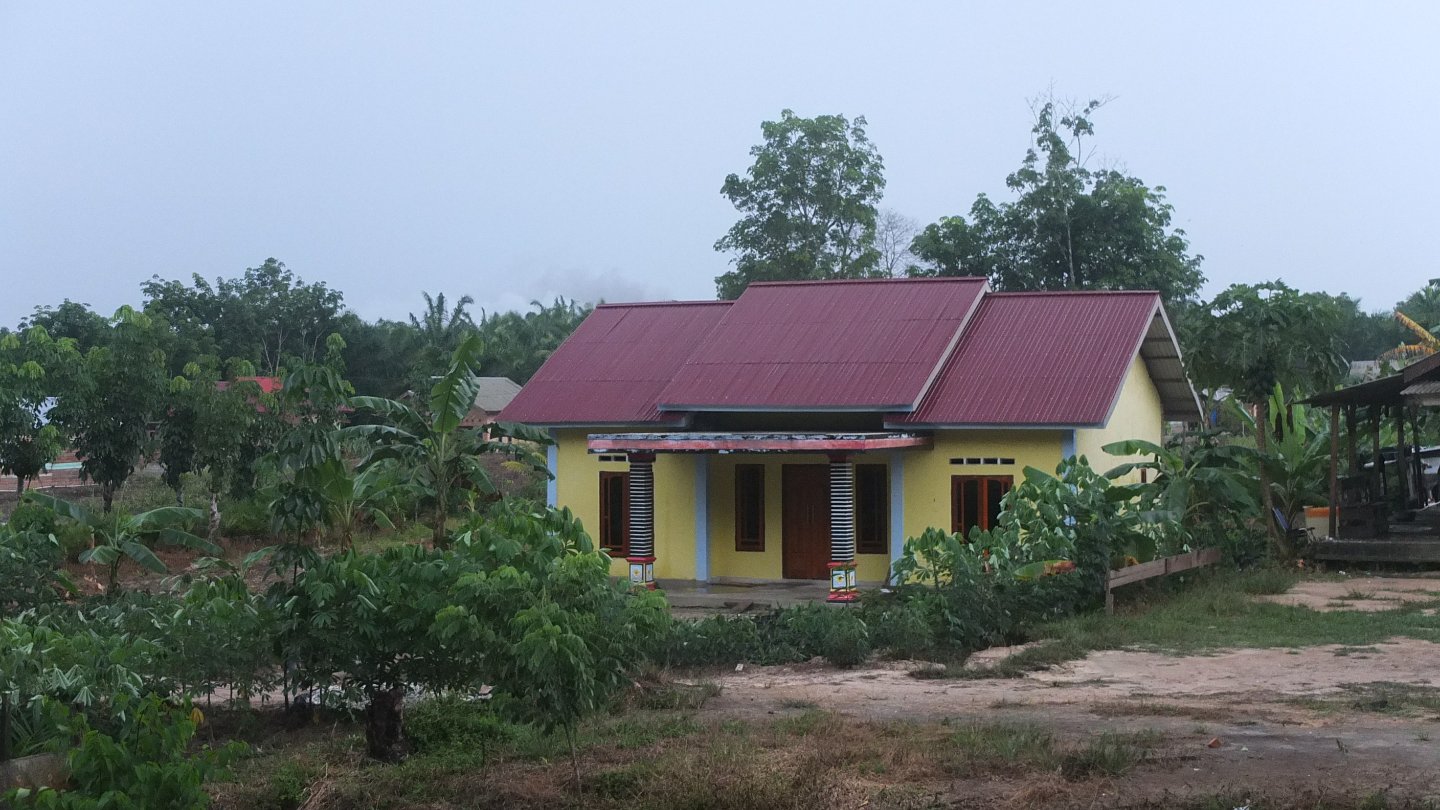 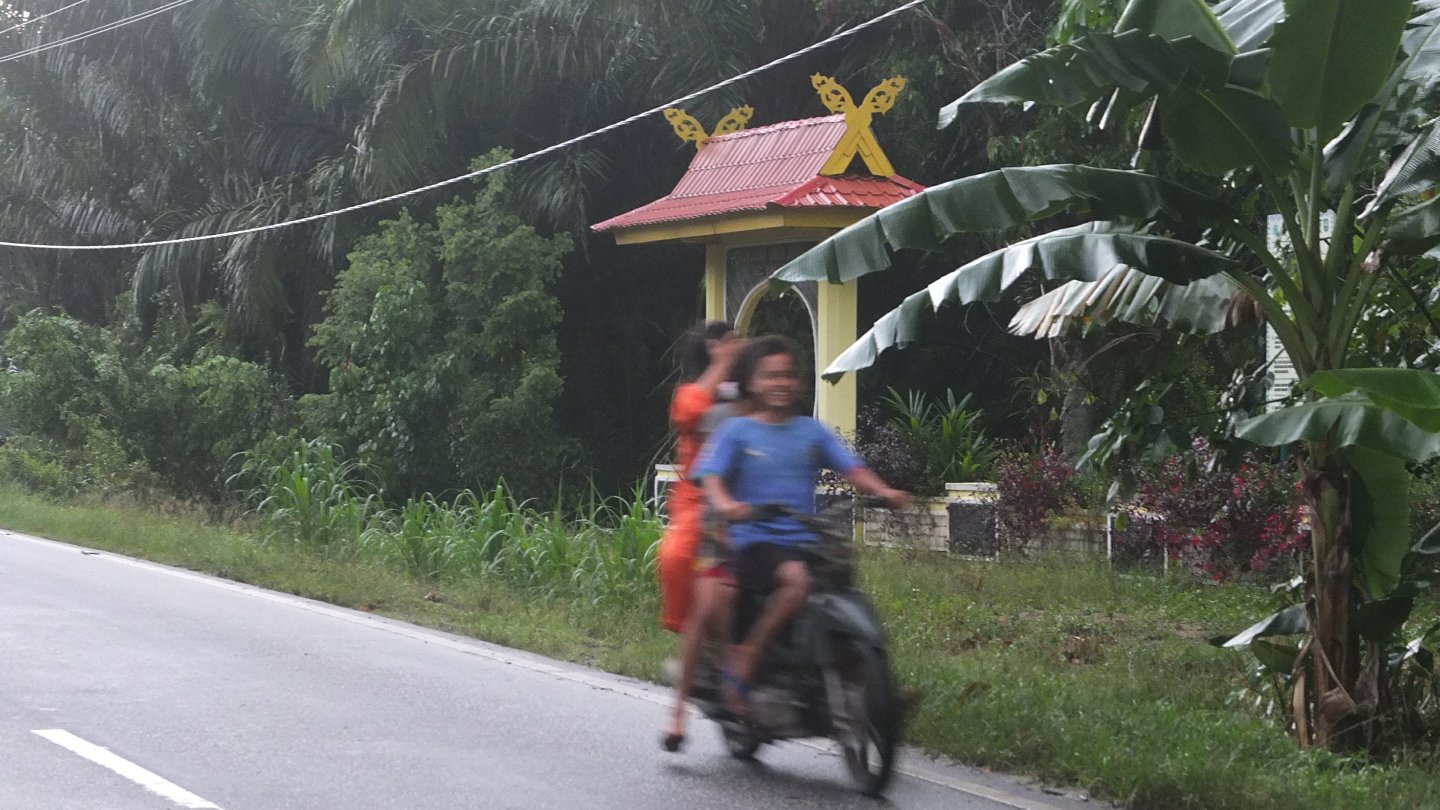 This is blurry but this is more to remember this moment. Those girls were previously behind me driving their scooter. I could hear them talking and laughing. I was pretty sure it was about me the “Buley” (stranger). They overtook me and did not dare to look at me :-) Then I’ve seen them turn around and coming back. They thought they would be discreet enough to watch at me but that did not happened :-) I actually stopped already to shot the previous house and waited for them to come back. When they saw my camera they screamed, laughed, hide themselves and quickly passed me by. Hhaha, funny ones :-) 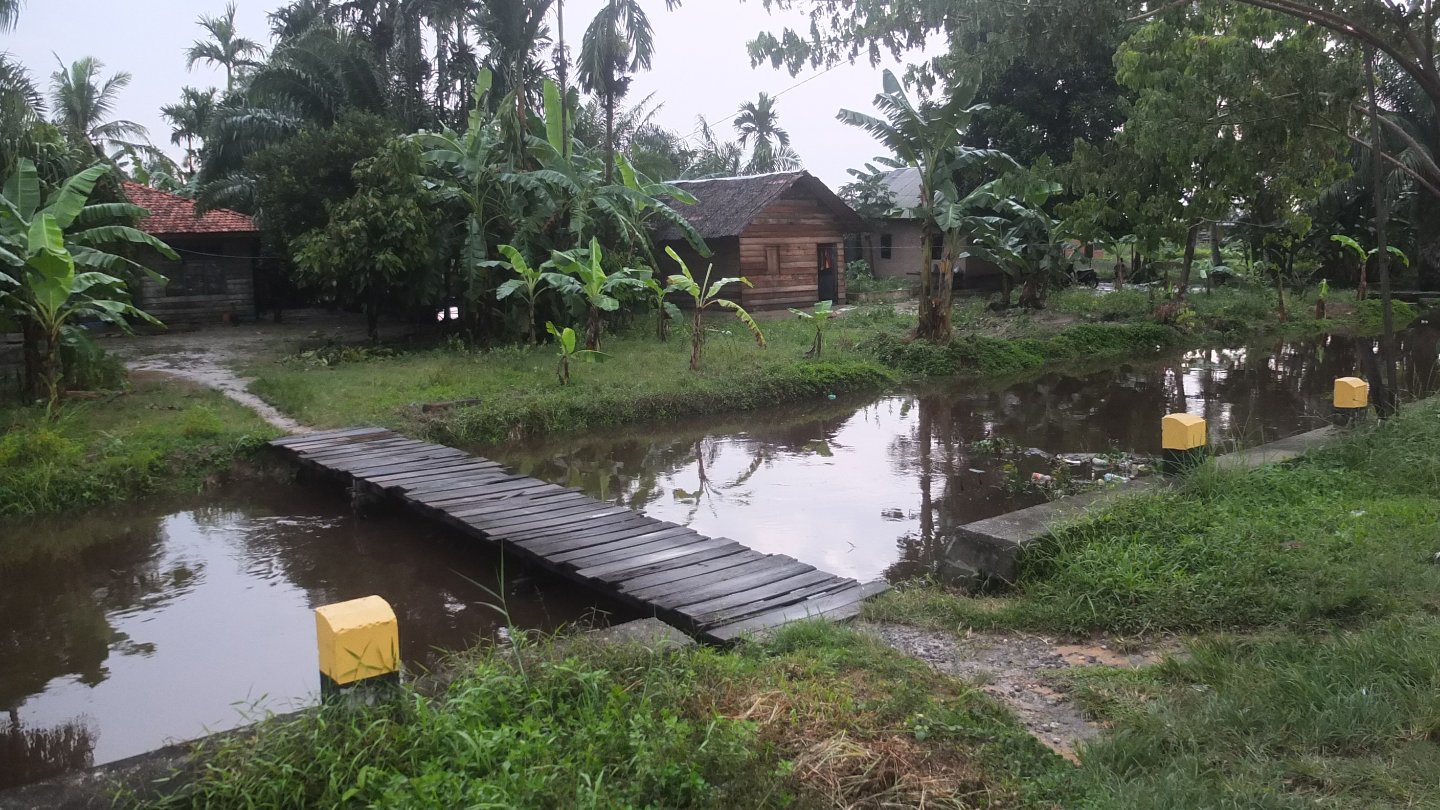 I’m continuing to travel along a river which is not the Sungia Siak but a tiny one. I’m now on the road, there is the river and on the other side the houses. 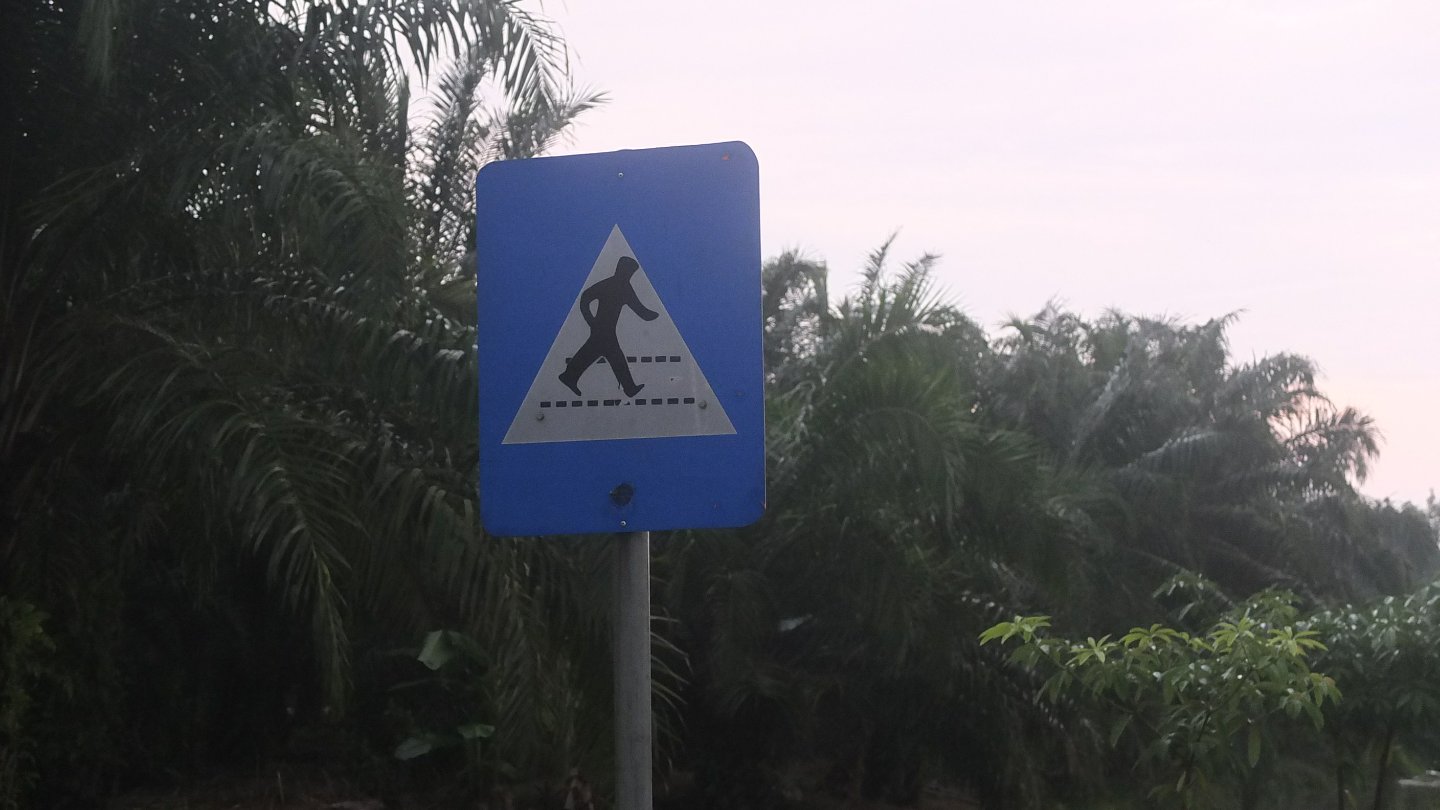 I like this kind of road sign. The design is a bit different than ours. Apparently, you must rush here when you cross the road ;-) 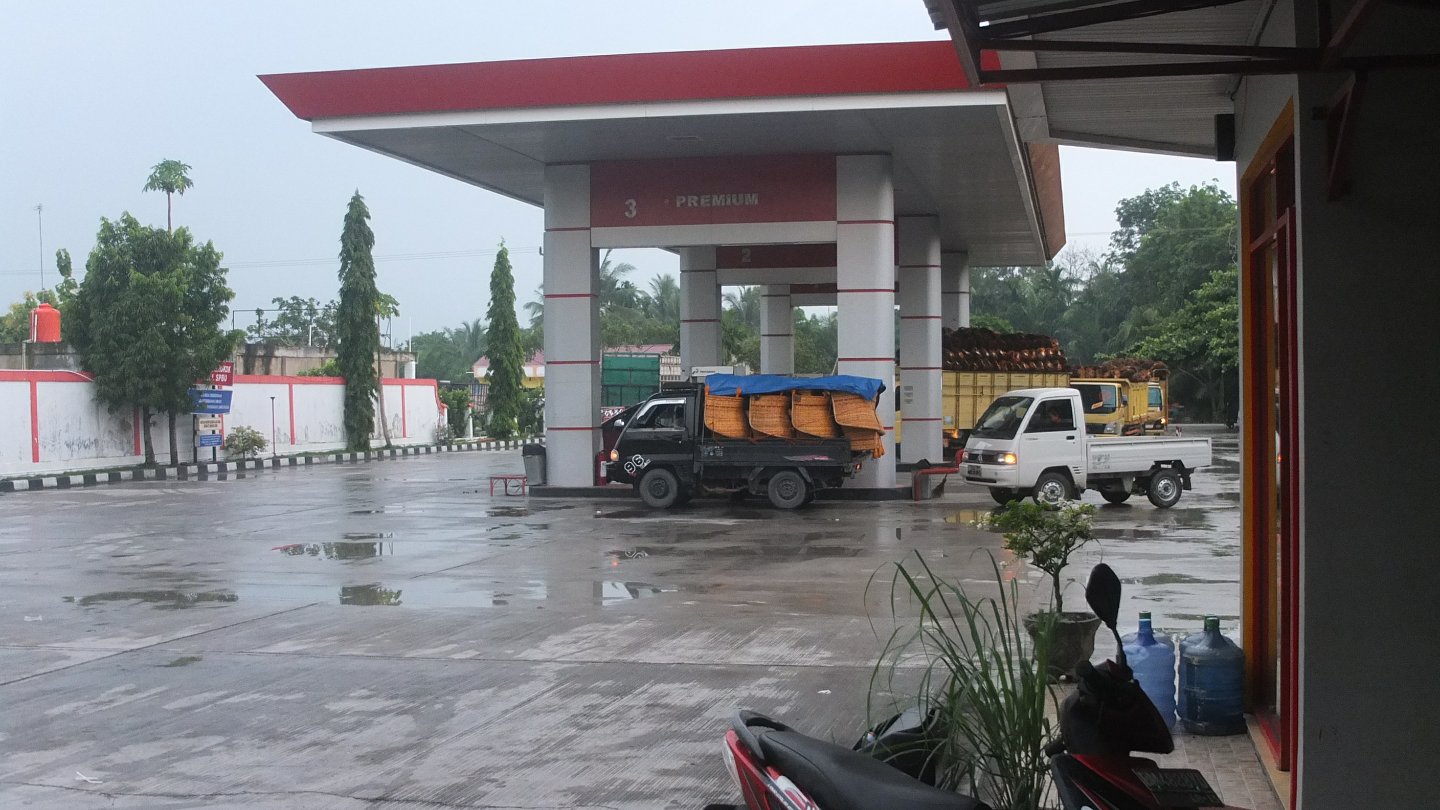 Here I am in a Pertamina gas station again :-) 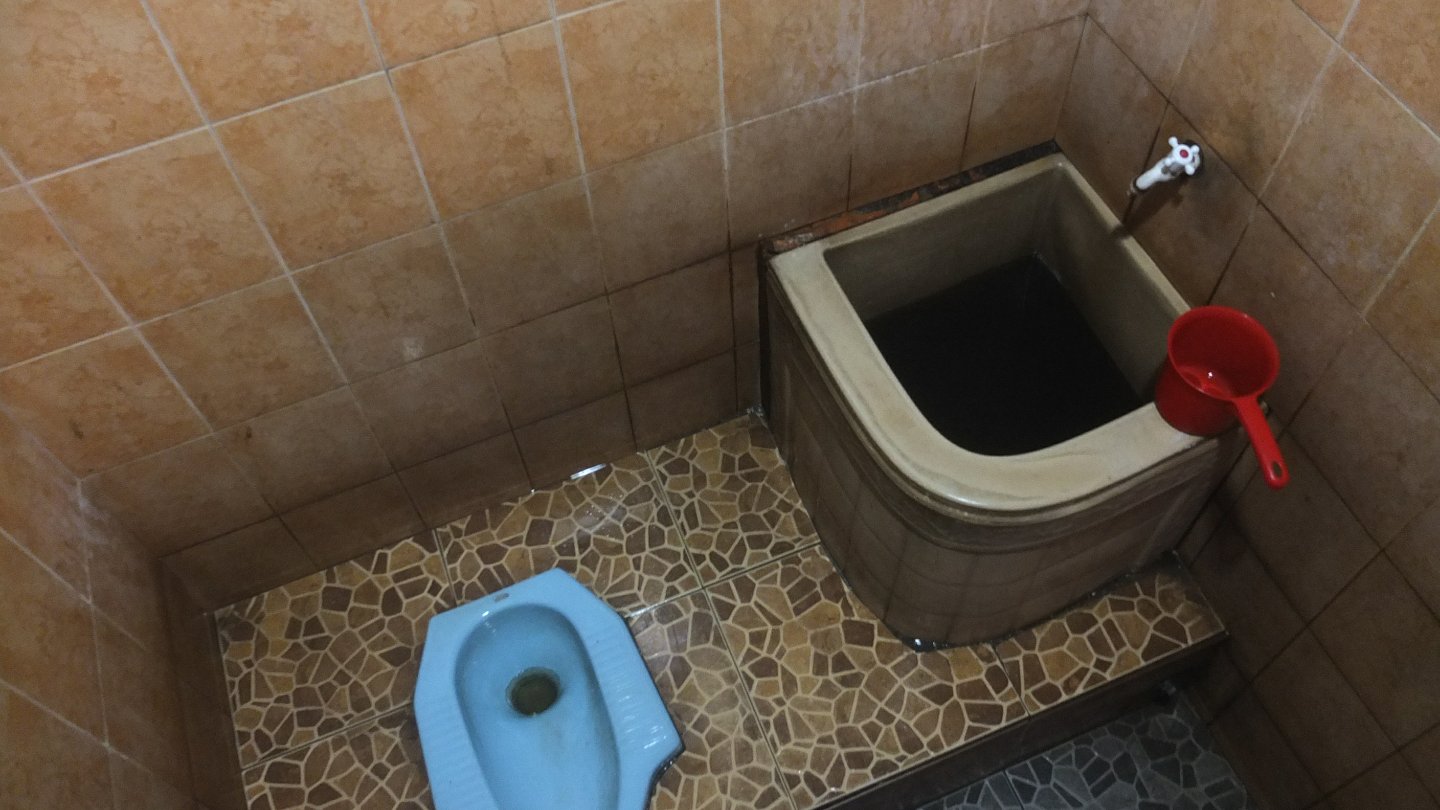 Indonesian toilets :-) I think they pump the water directly from the river here because the water is actually dark brown. Doesn’t look very clean… 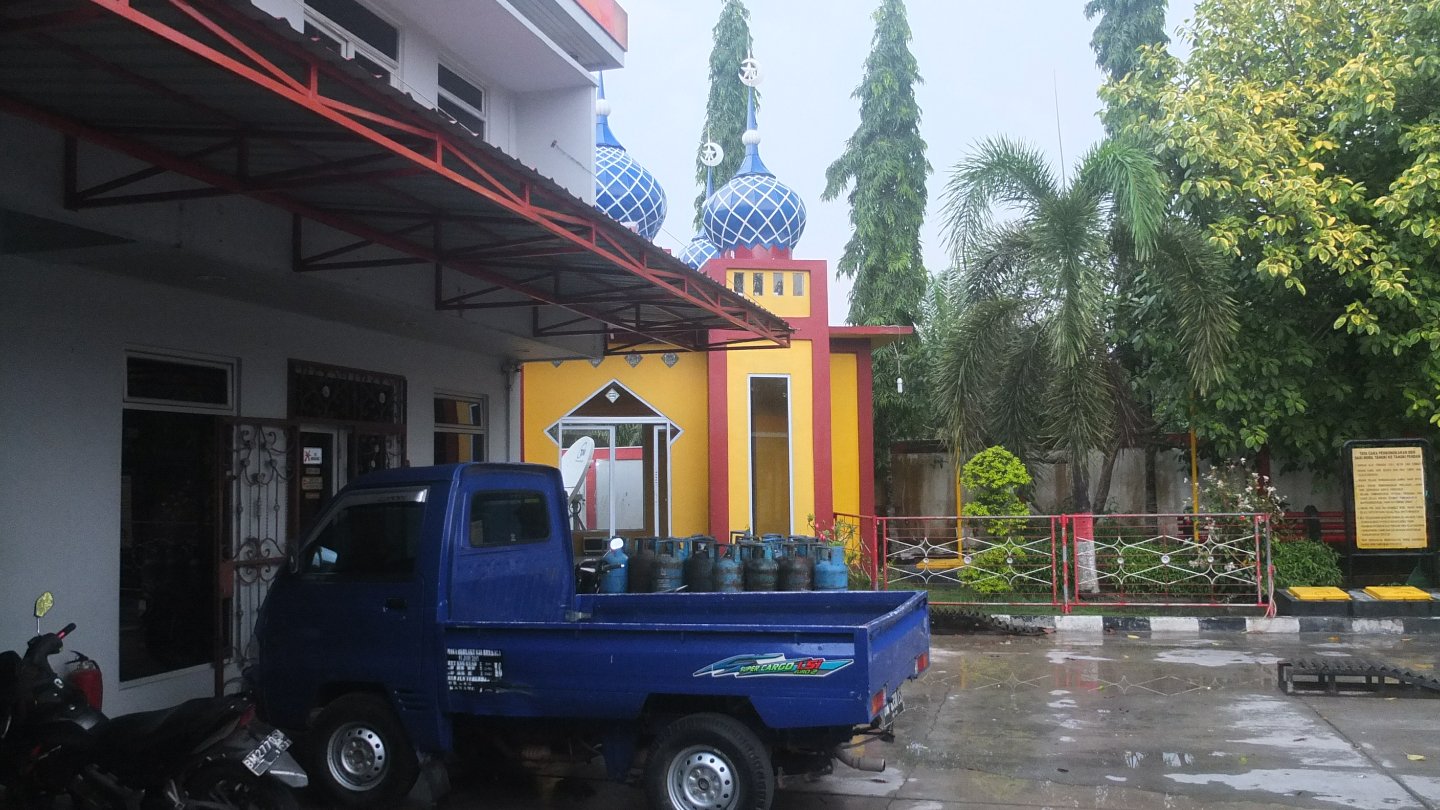 Each Pertamina station has a mosque so travellers can easily pray during their trip. 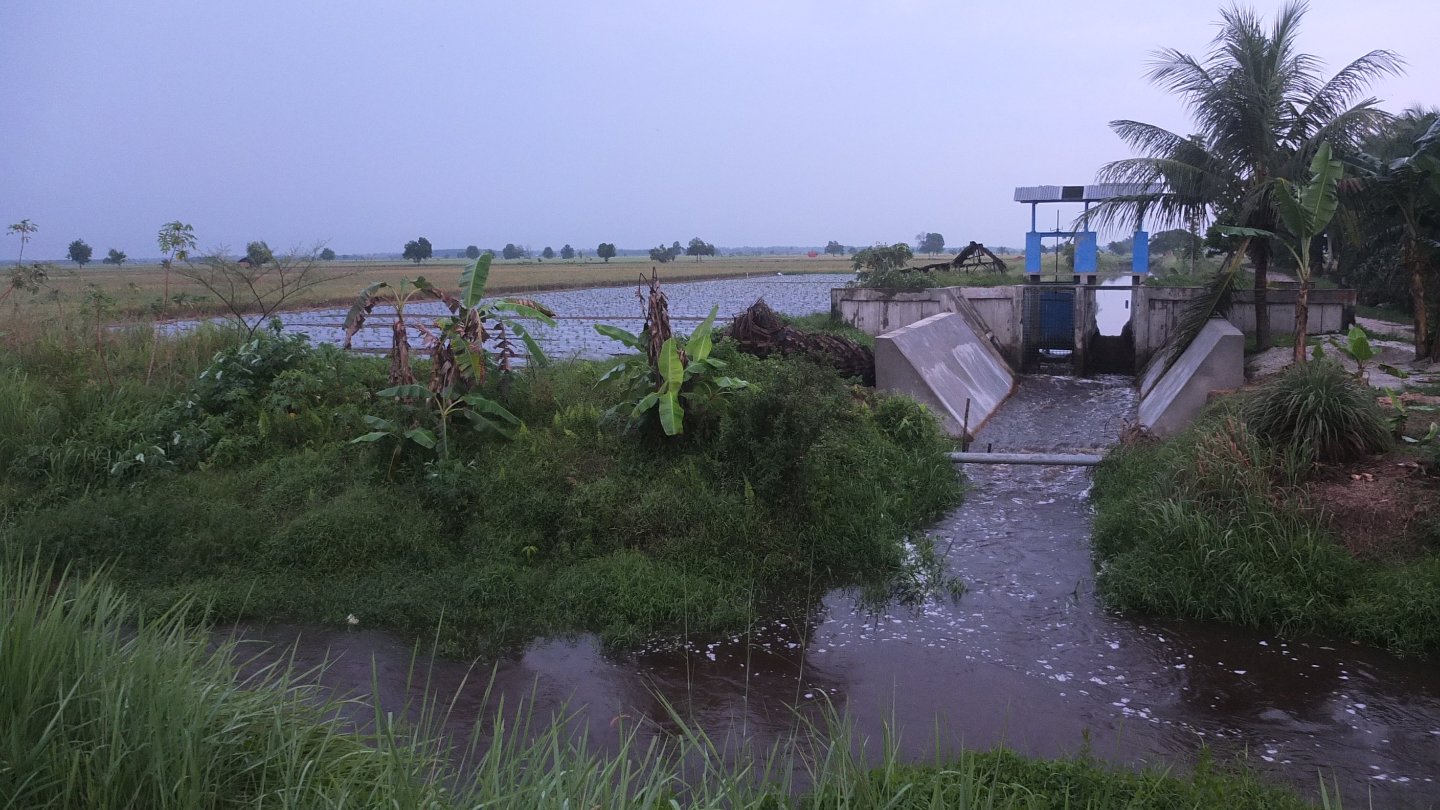 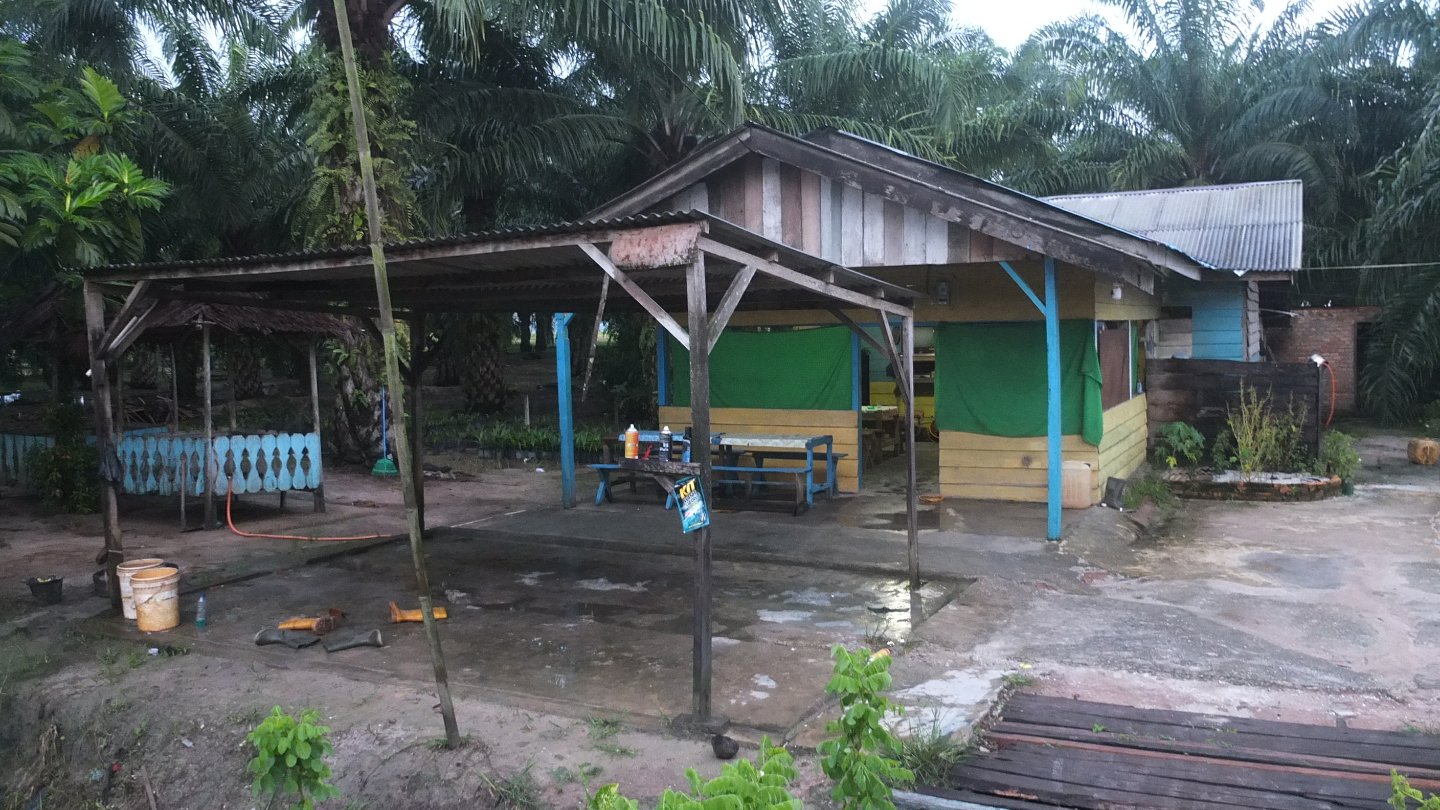 This looks like a Warung, I will stop here for dinner and will decide what I do next. 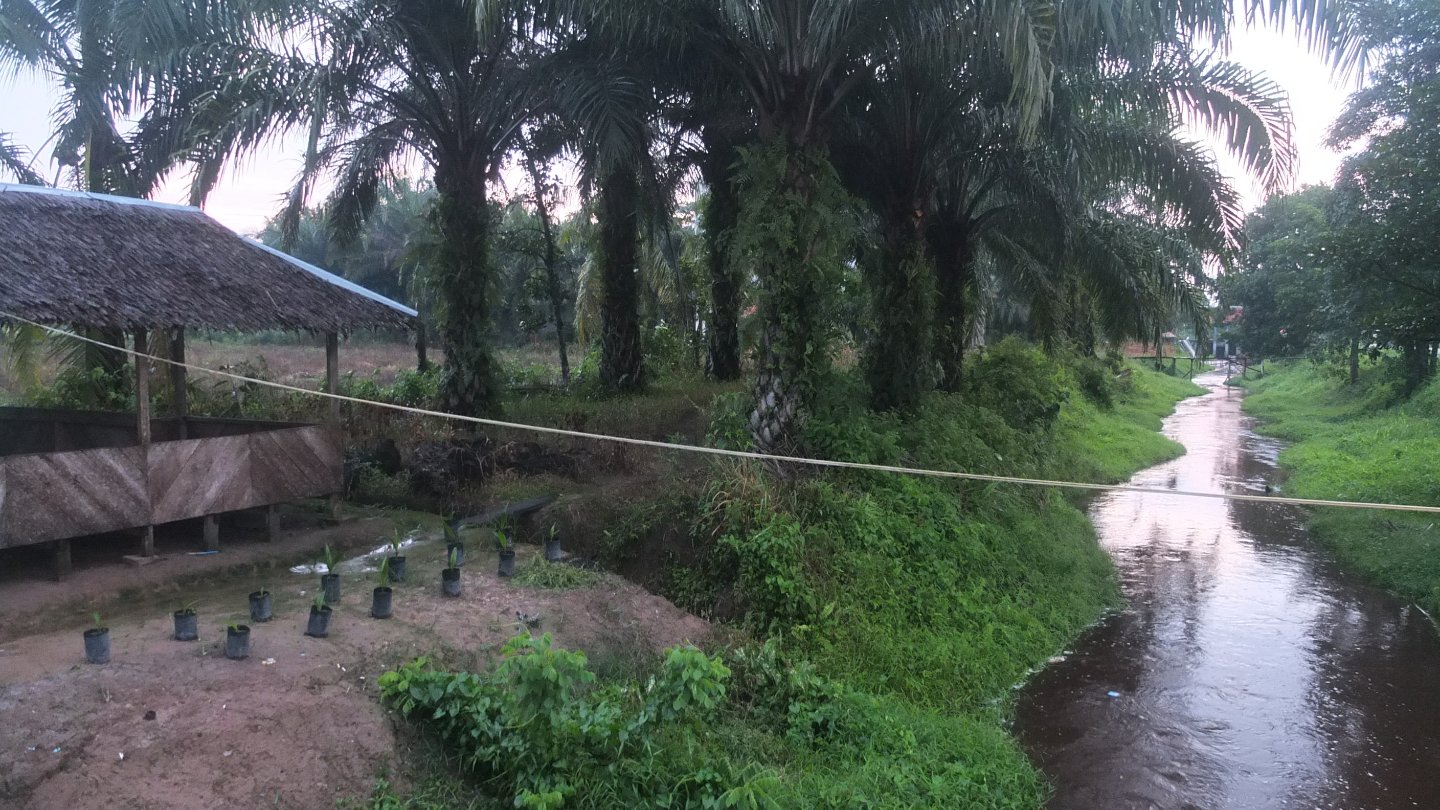 Like previously, there is a bridge to cross the river. That’s good because it should be more quiet than when the warung is just next to the road. 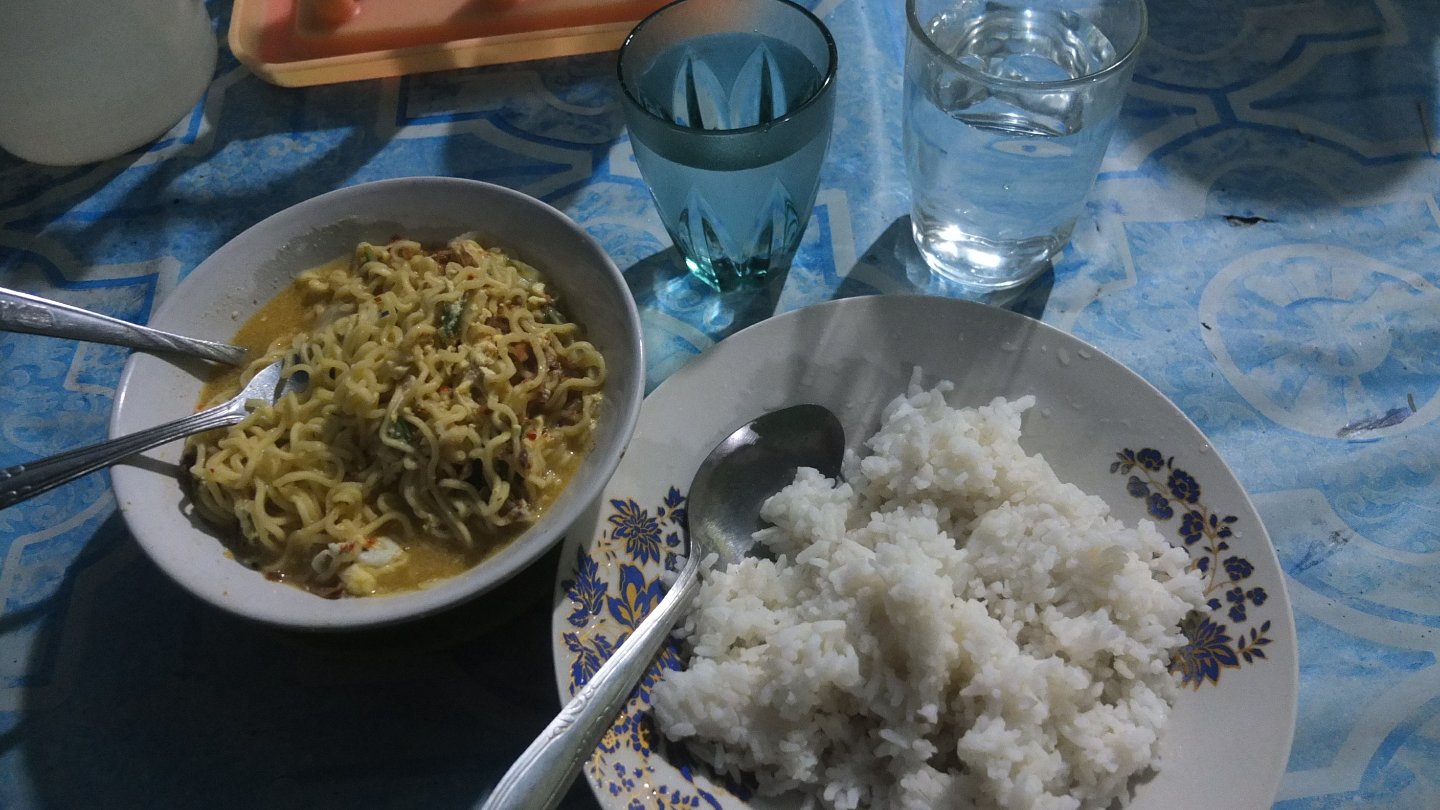 I’ve ordered some Mie Rebu (Noodle soup) and the guy gave some rice too. 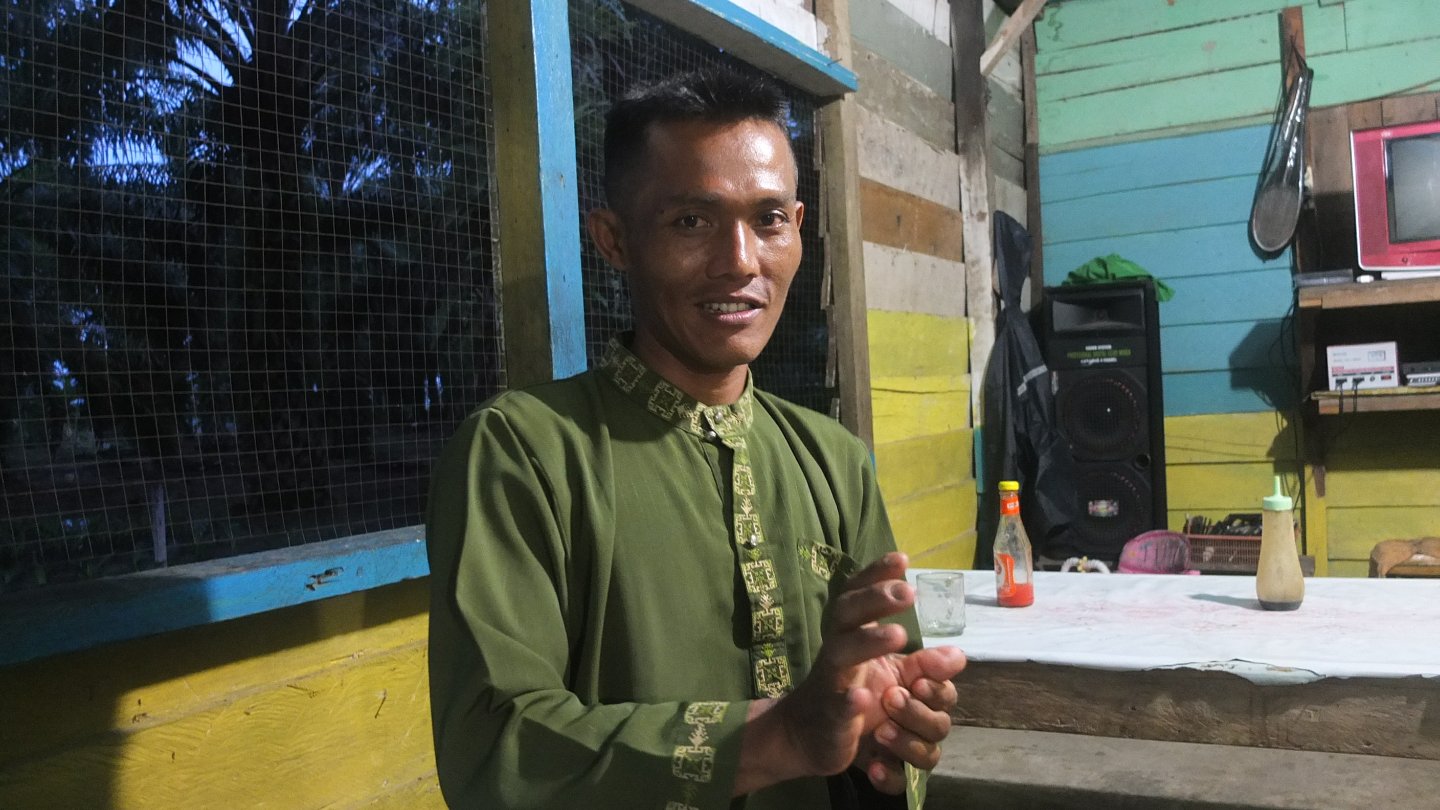 That’s the owner :-) Very nice, he speaks little little english so I must use my 57 Indonesian words to have a chat. The body language helps a lot and my phone too! 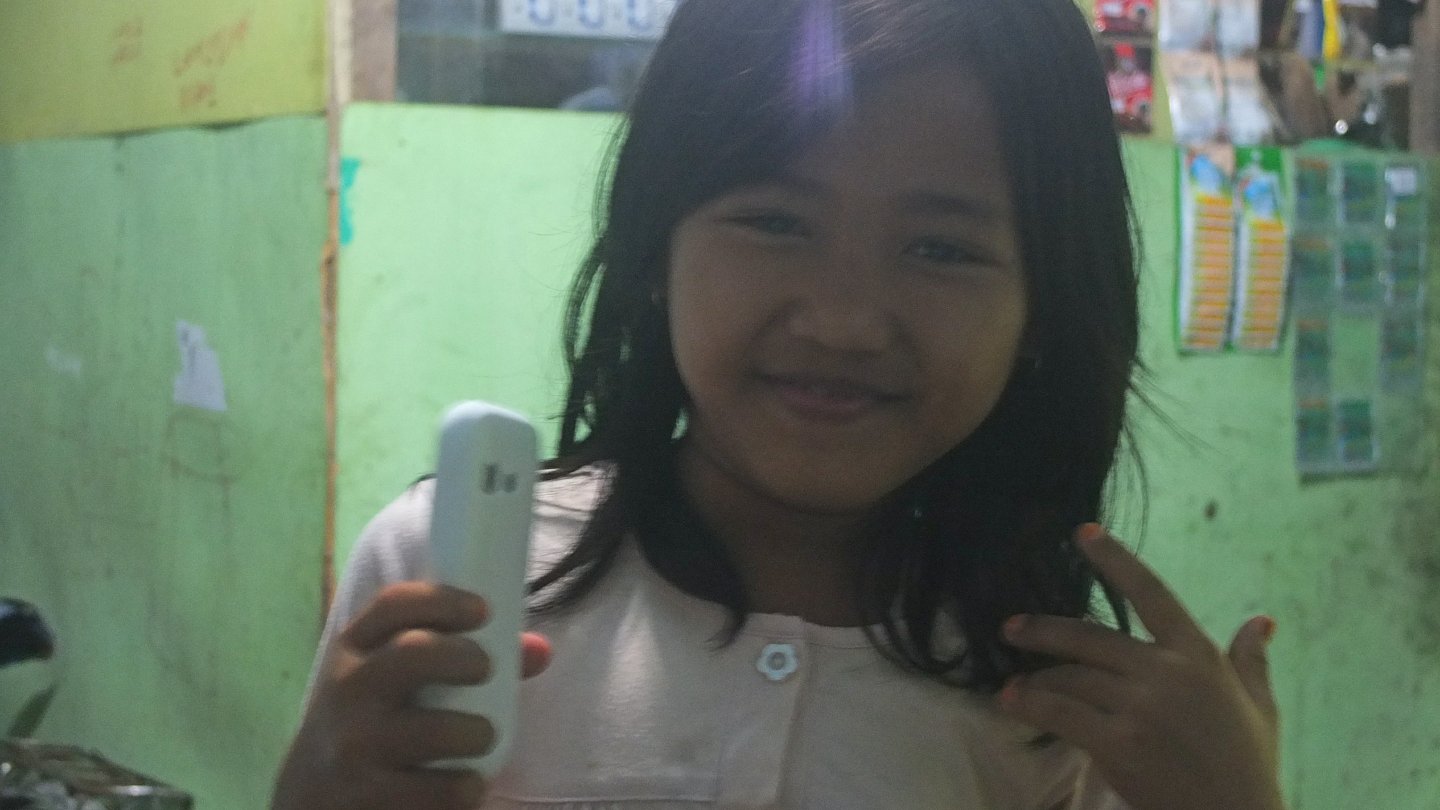 One of her daughter did the “Pause” when I wanted to get a picture of her. In fact we had a time for “fotos!”. She looks so much like her mother! Same face and expression. You will see that tomorrow :-) 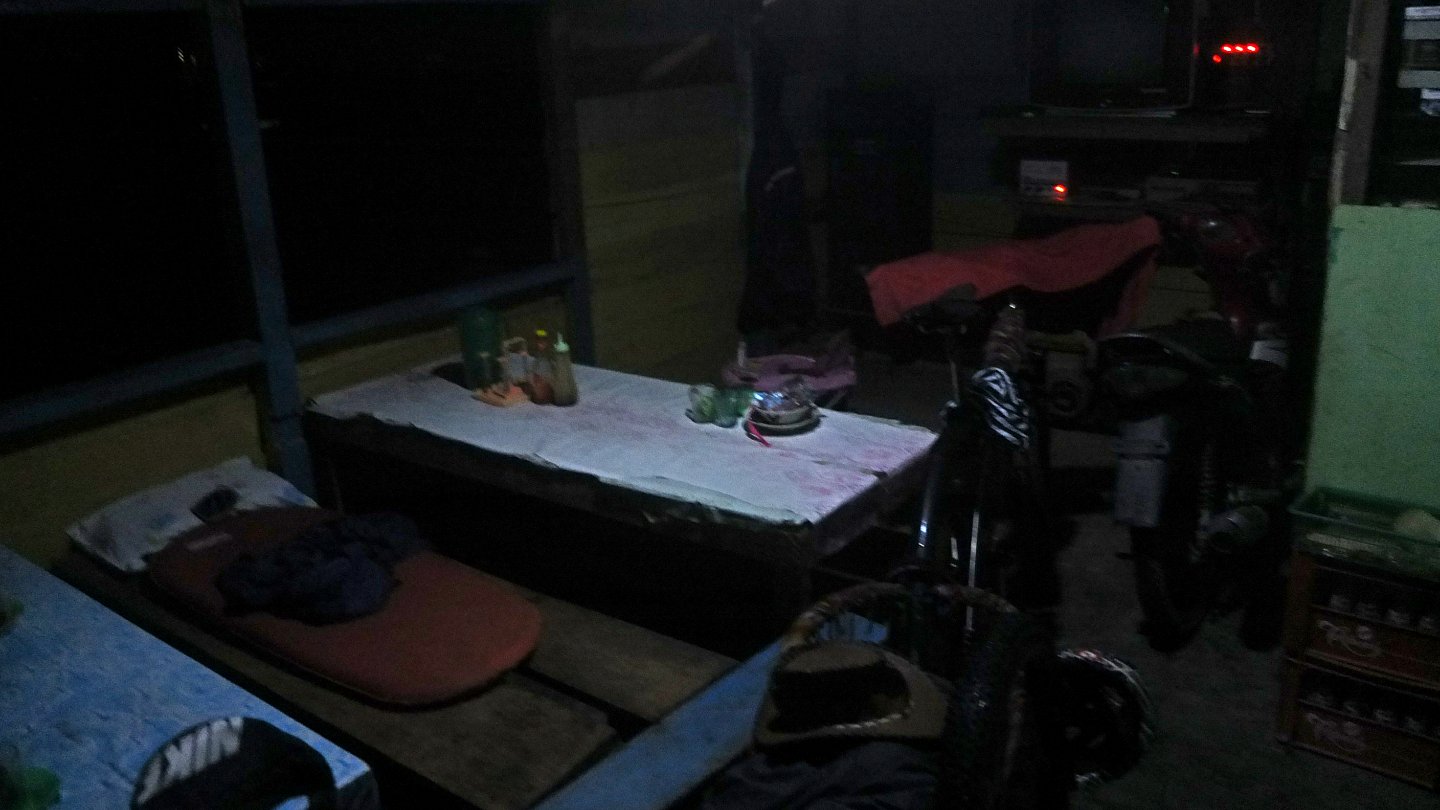 I’ve spent some time with the family. The mother and two other daughters arrived later. They have a little boy as well, the last one. Before I get to this place I’ve seen two trees in a field next door. I asked if I could sleep there tonight but the father told me I could sleep here. I could even take a shower. Life is too easy! Good night!