Today I have done two passes again. There is not much choice if I want to keep doing a minimum of 70km per day. I have also met 3 cyclists from United Kingdom during the first morning ascension. Once at the top, I was welcome by those 4 children who waited for me to take pictures of them. Then I continued downhill until I reached the river and a village where I had my lunch break. Finally I started the second climb of the day, reached the summit and then got caught by the night and a double storm. I really thought I would finish the night fully wet but fortunately my camp site resisted. Lucky me! 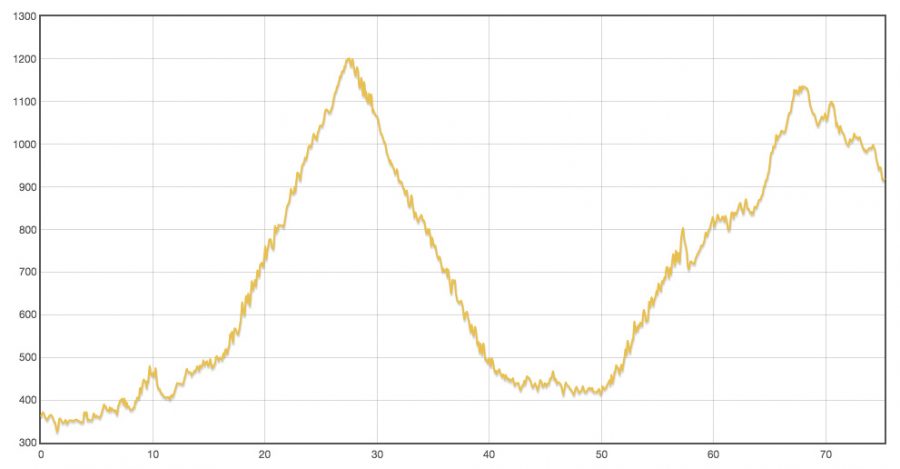 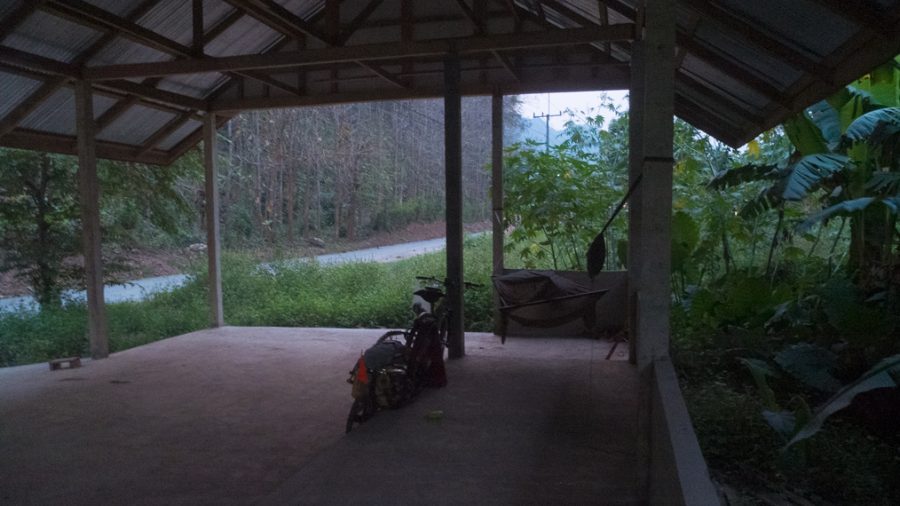 The last night under that big shelter was very peaceful. I slept very comfortably. 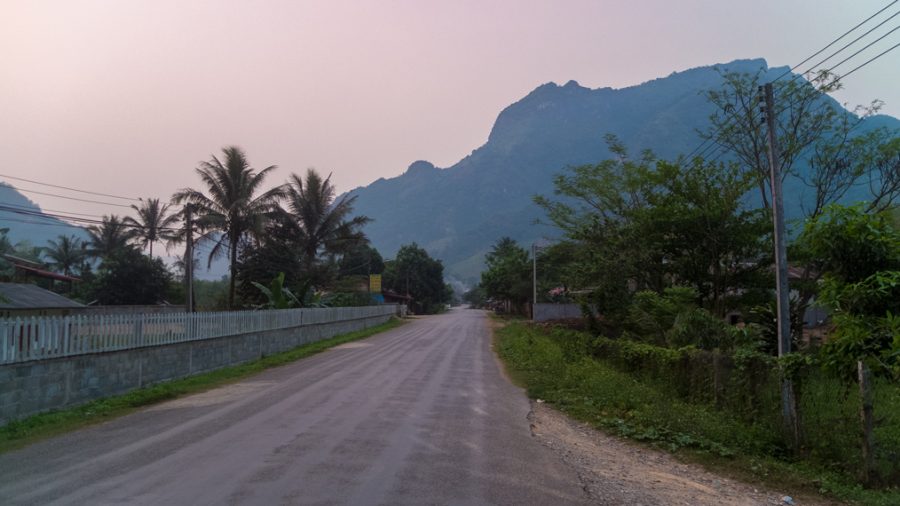 It’s now around 6am and I’m already on the road, cool! 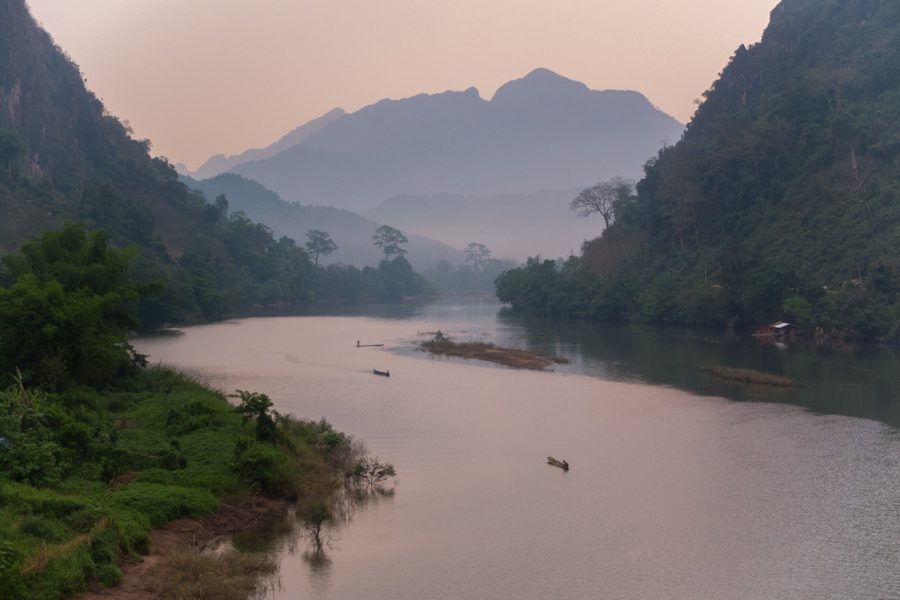 Same view as yesterday from the bridge. 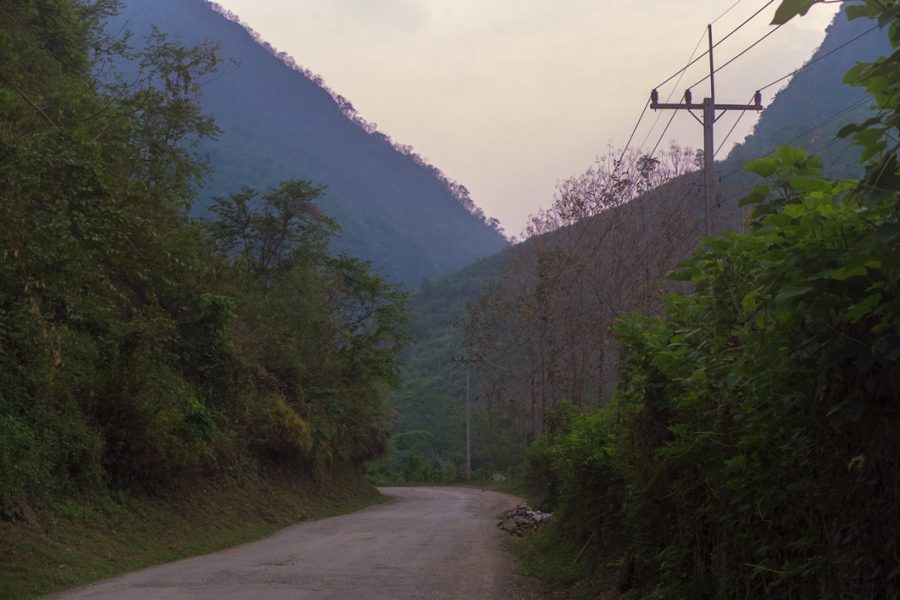 For now it’s gently going uphill but I know I’ve got a lot more to go. 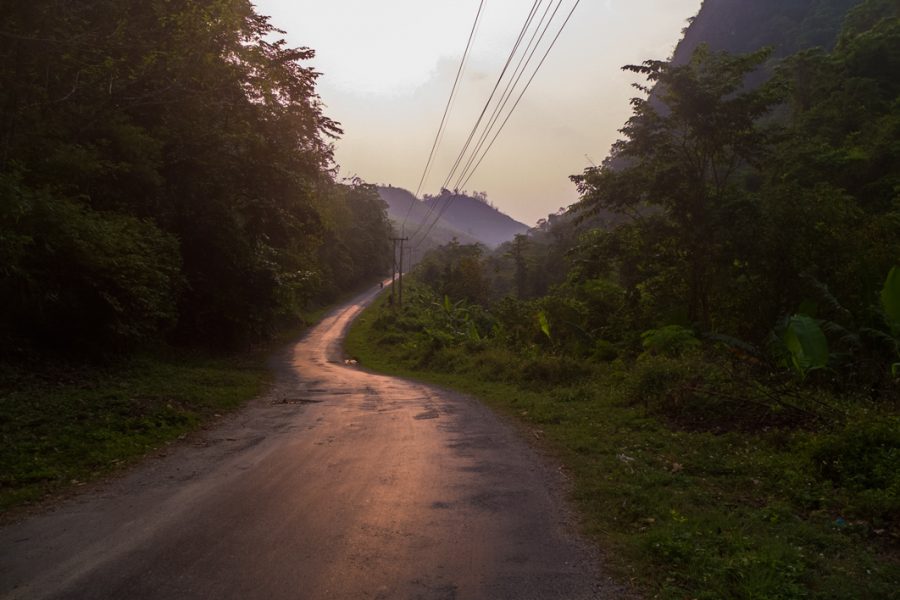 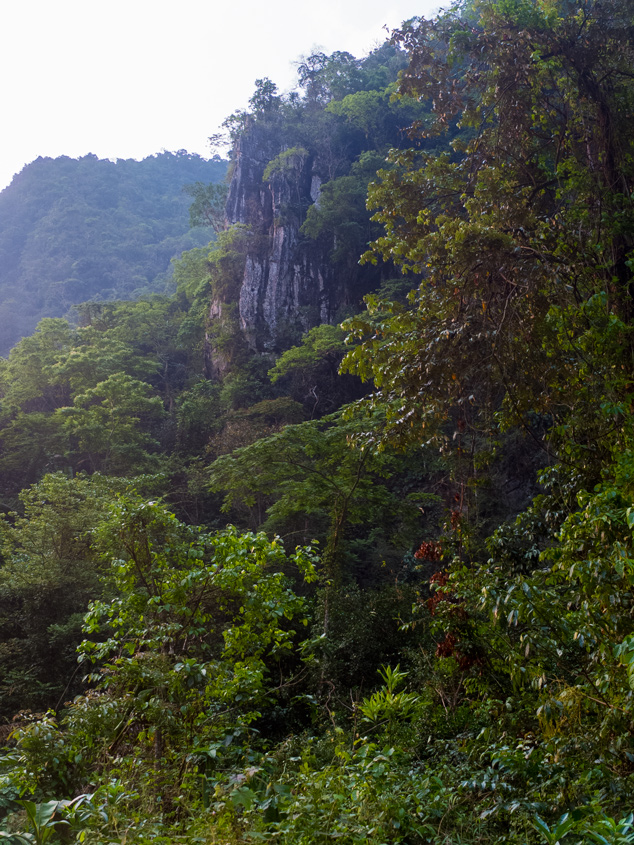 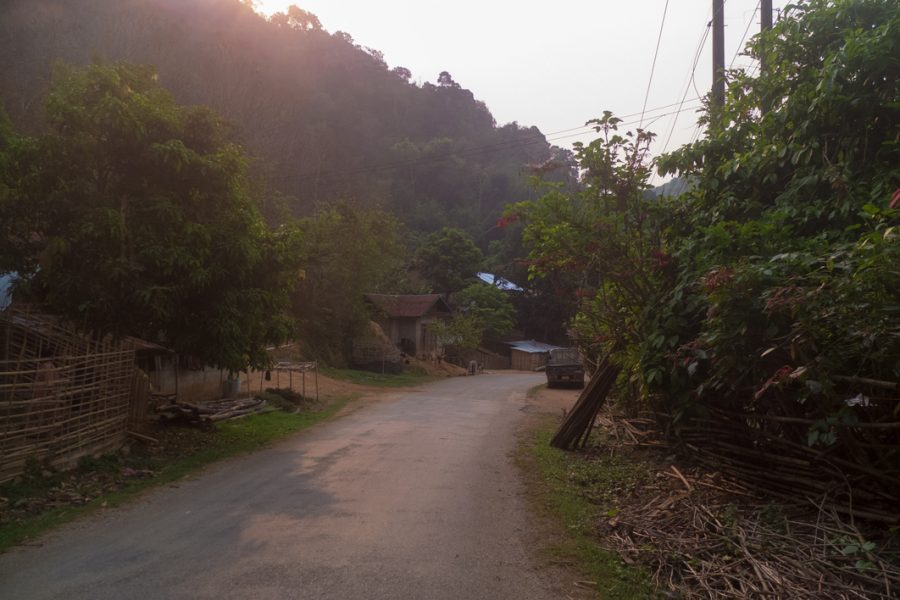 The sun is coming! 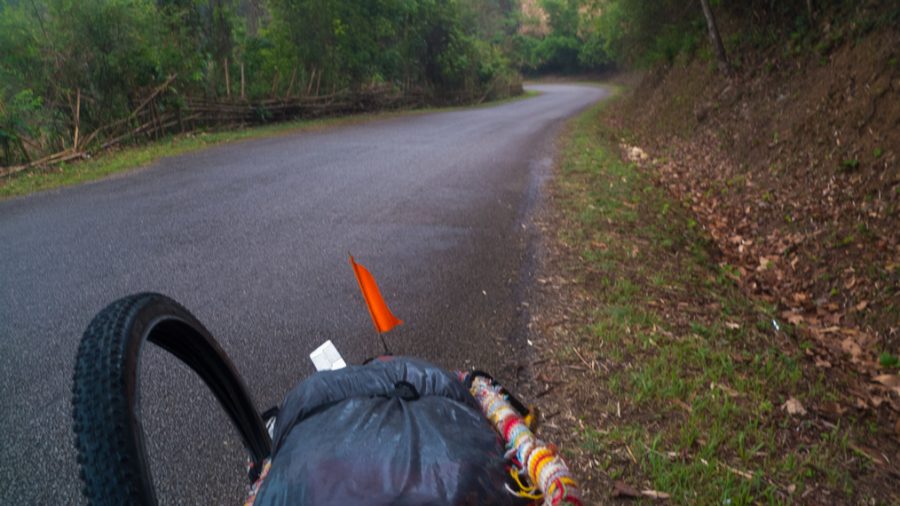 I passed through that last village, had some breakfast on the side of the road for a moment. Few minutes after I’ve started cycling again the rain started… For now it’s not too heavy so I can keep on going. 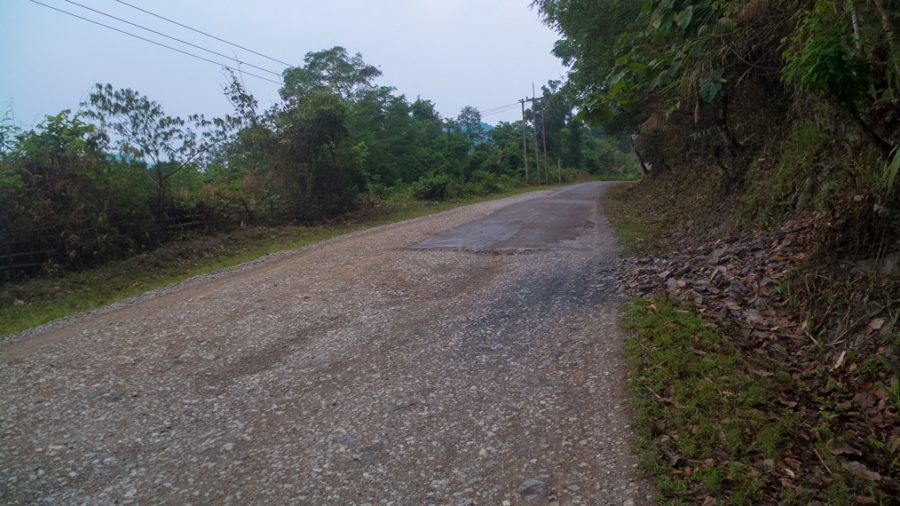 More I go forward more the road becomes patchy like this. At the beginning, most of the time the road was sealed and some short parts were gravel. But now, the gravel parts becomes longer and longer. 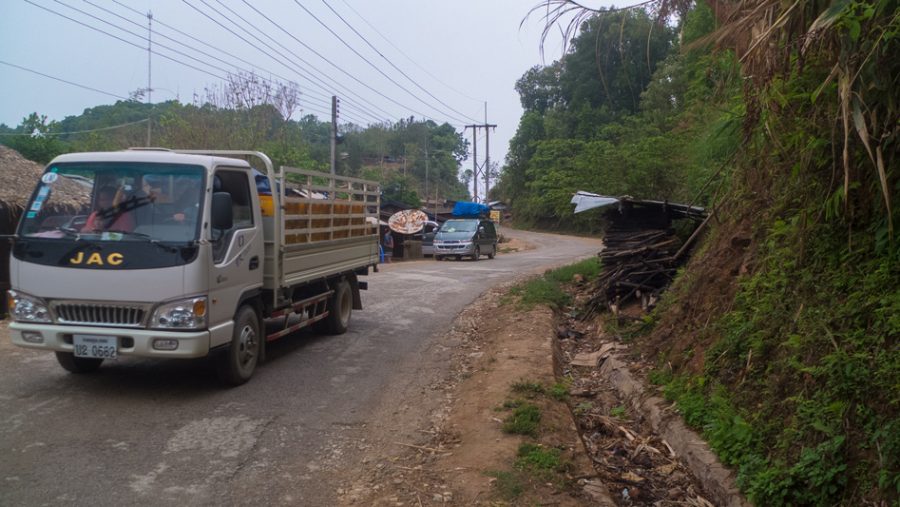 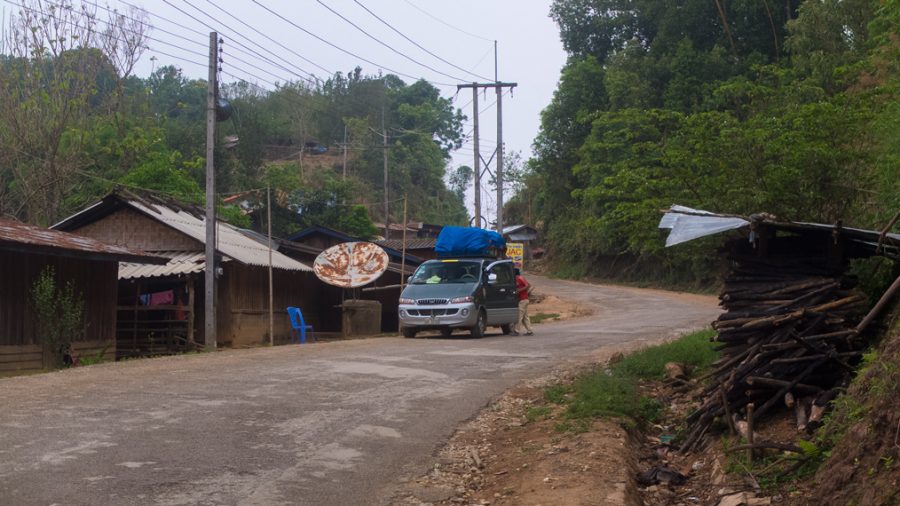 Two more curves and I’m there. 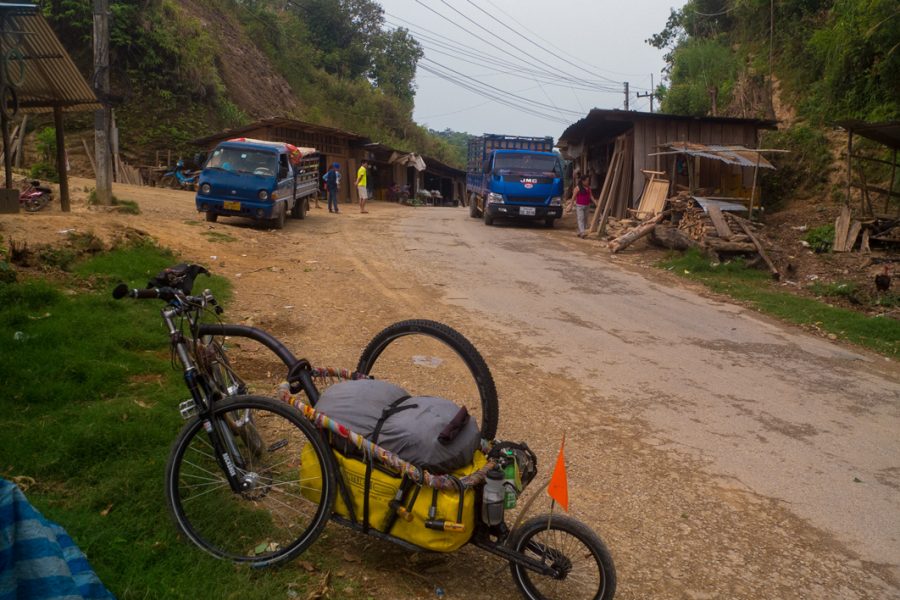 Nice to have a break. I must wear my jacket for the downhill part because it’s not very hot now due to the previous rain.

When I stopped those kids, curious, came around to observe me. They saw my camera and I understood that they were waiting for me to take picture of them. I pointed my camera towards them just to see their reaction. They laughed immediately. 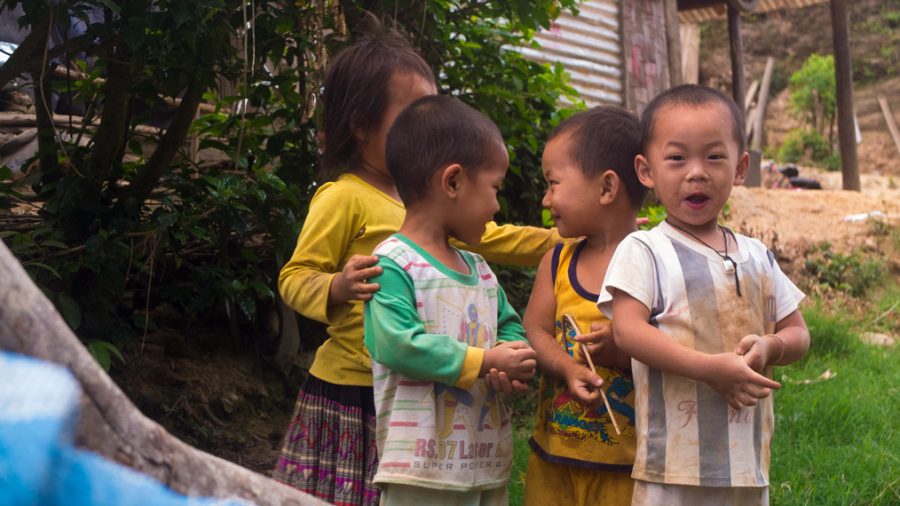 They were very happy to pause :-) They reorganised themselves several times. 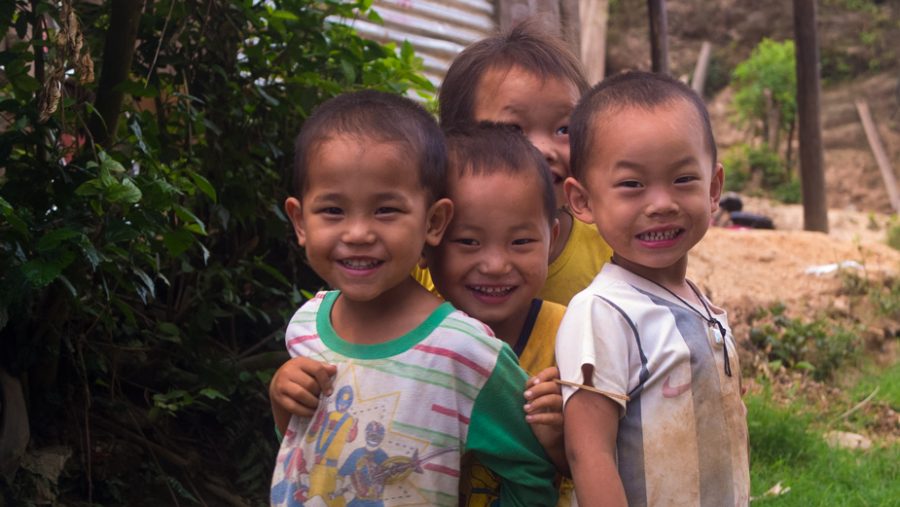 Once I’ve done a few, I showed them the pictures and they laughed even more ahah. That was fun :-) 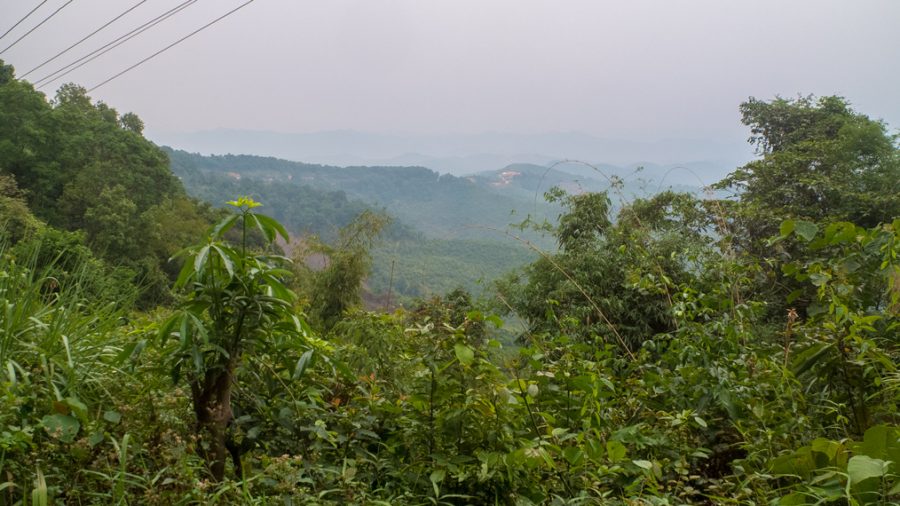 After that short break, I put my jacket on and said goodbye to the kids. Let’s go! 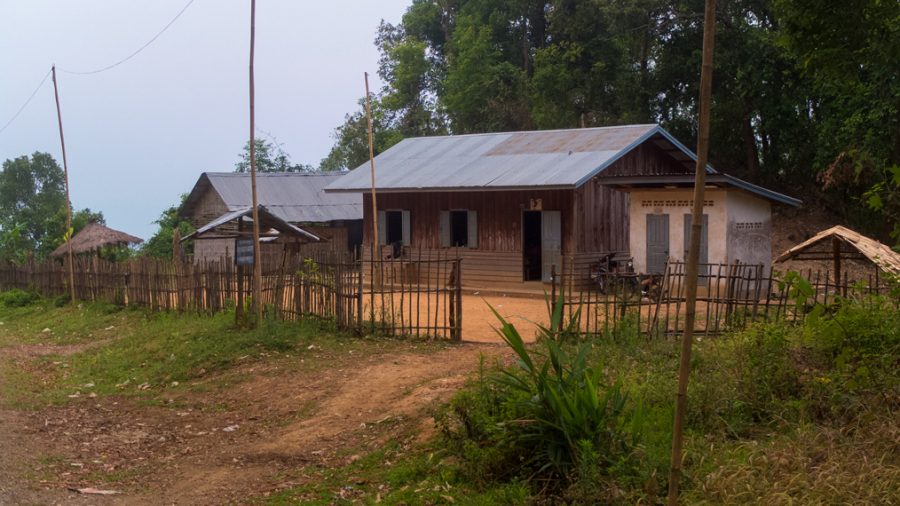 I guess this is the primary school of the village. 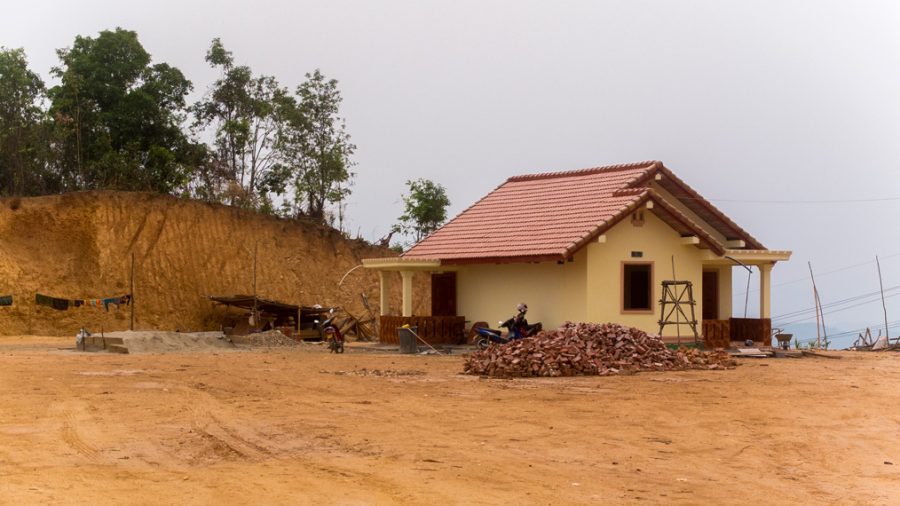 The top of that hill has been cut off. I presume the owner of this land sold most of the soil to construction company and built his brand new house with this money. This is only supposition. I’ve seen many times now this kind of shopped land with a house in the middle. 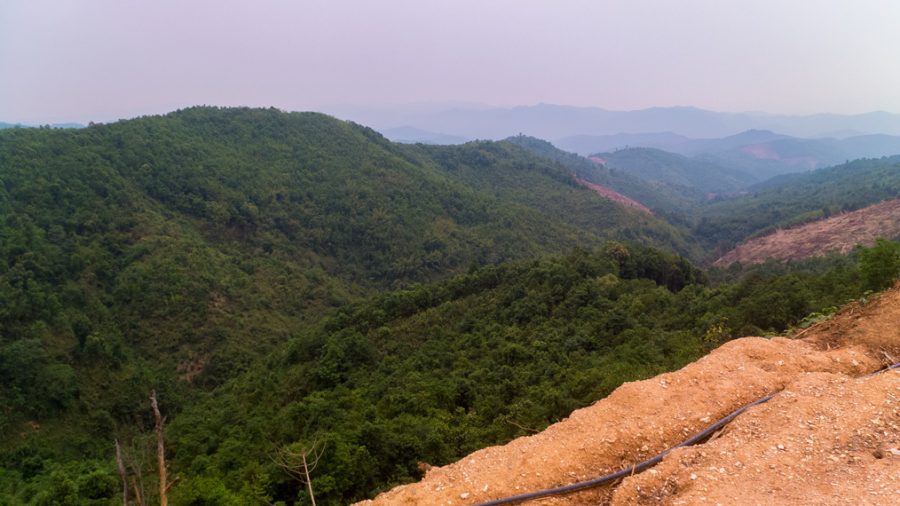 That’s the view from that “newly naked garden”.

Hills all around the place. Not much thing to see a part that.

During this downhill, every time the road becomes a bit more flat, you can bet there is a village. 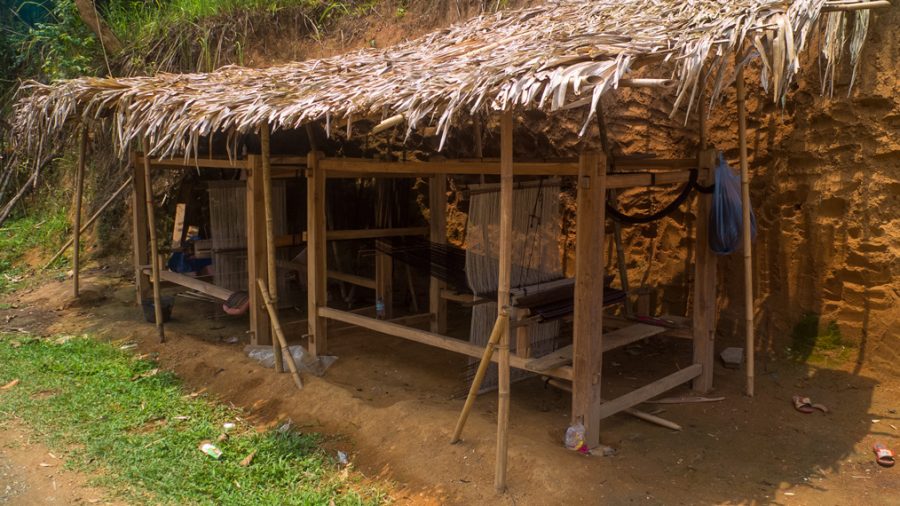 Most of the house here have their own loom. I’ve seen only women using them: teenagers practice, women create and elderly master the technique. 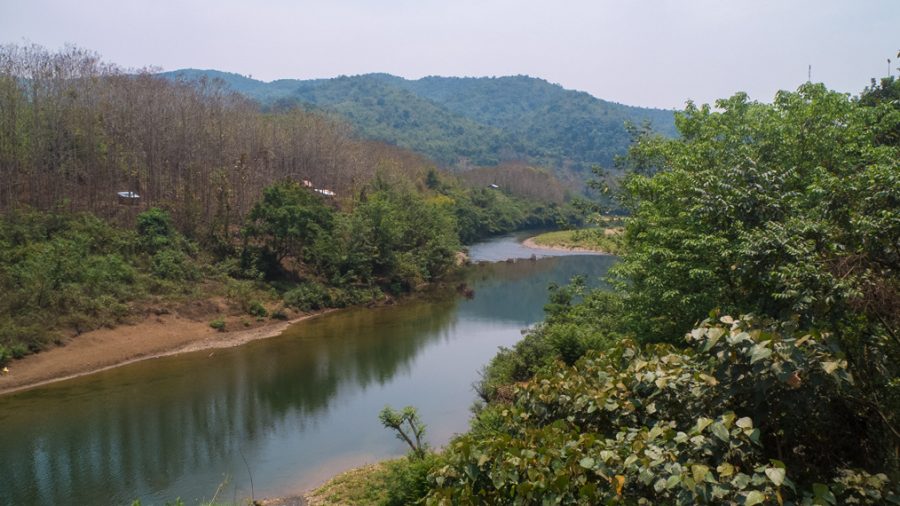 I think it took me something like 2 hours plus to climb and 20 to 30 minutes to reach the river on the other side. I’ve met not a long ago three people (I guess they were from UK) on bicycles coming from Vietnam I think. They just had a big backpack attached at the back of their bicycle and that’s it. Unfortunately we didn’t have the time to talk much. They were going uphill and wanted to reach Nong Khiaw today. We said goodbye, good luck and kept on going. 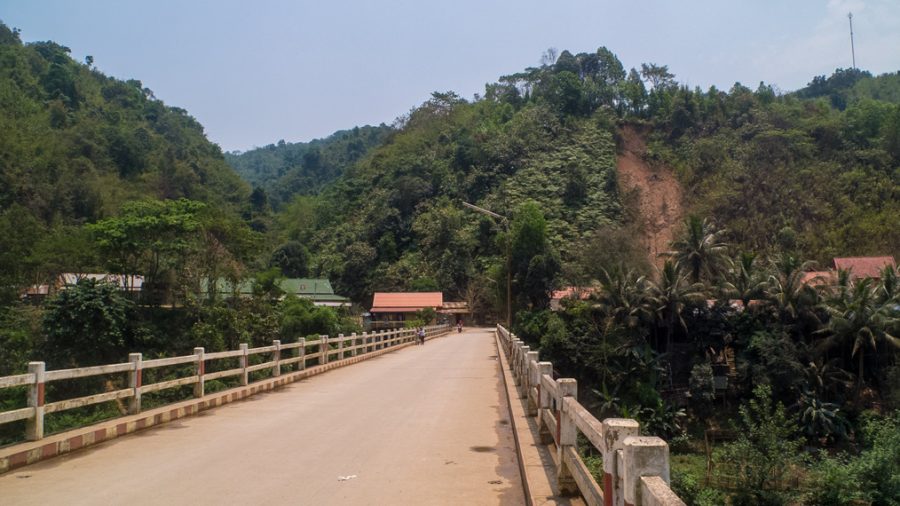 I know what’s going to happen after this bridge. Another hill! 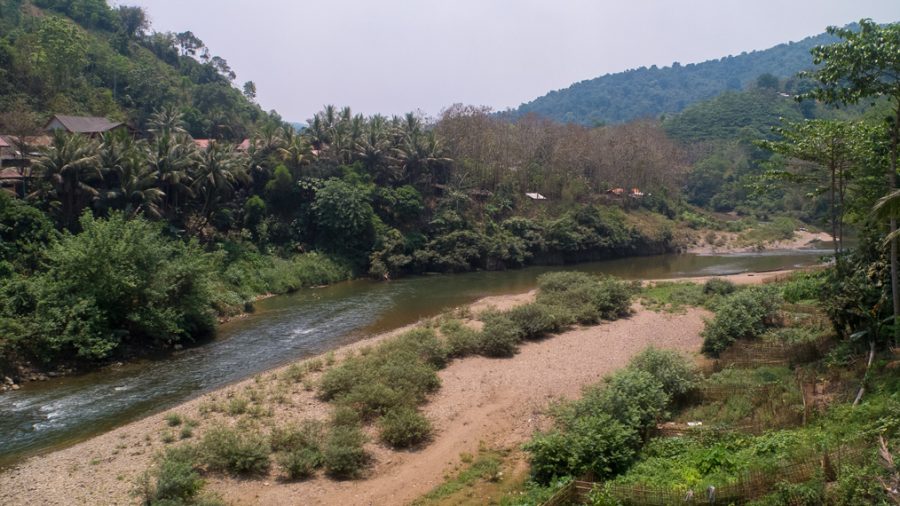 If I could find an access where to get closer to this river I would be very happy to have a rest here! Unfortunately, I don’t see anywhere I can cycle down. 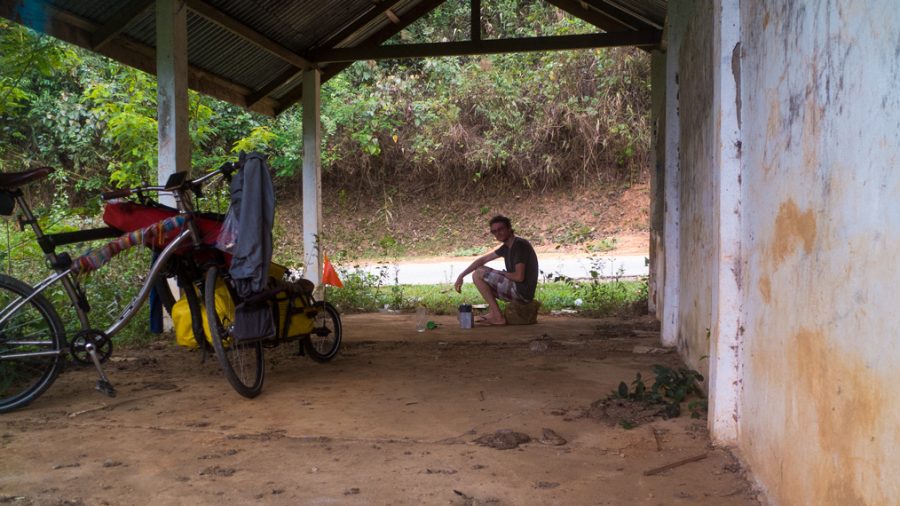 Not long after I’ve started the second hill of today, I found this shelter. It’s not very clean but at least there is space, I can cook and I’m out of the sun. 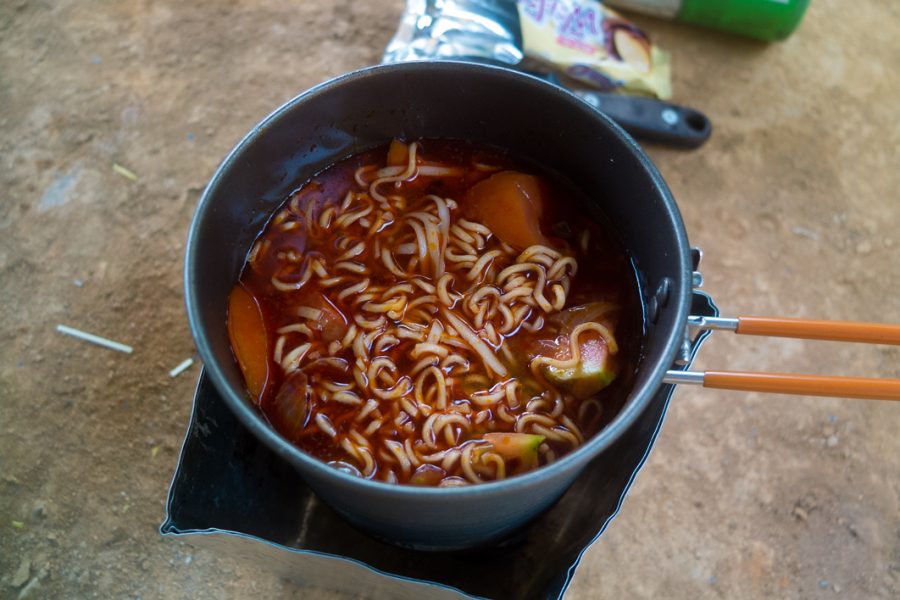 Mmmm, those nice basic noodles with tomatoes and cucumber again :-) It’s not too bad actually ;-) 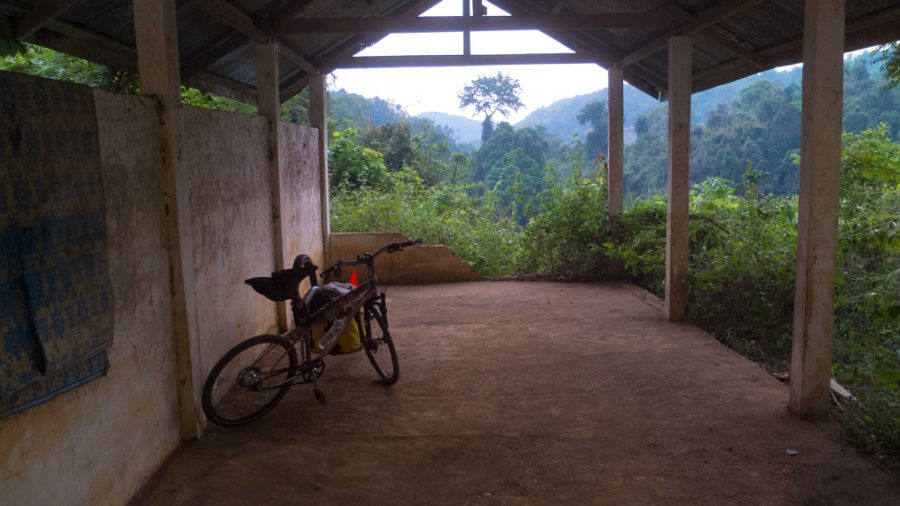 After lunch I thought about having a rest but before I wanted to clean the space I was going to lay on. I knew that, I started cleaning, and cleaning, and cleaning and finally I’ve done it all ahah. I wish I had a broom to get rid of the dust but still, it’s much better than before and I hope it will be useful for other people, maybe even cyclists. 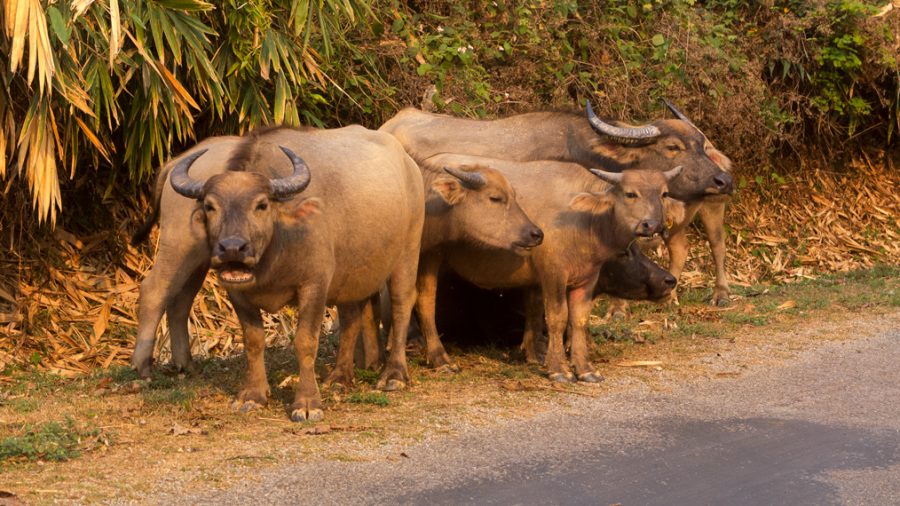 Around 3:30pm, I’ve checked the weather and saw that the sky was kind of covered so I decided to keep on going. This time I came across huge buffalo who, I knew, dreamed about being photographed. Ok guys, I can do that for you :-) 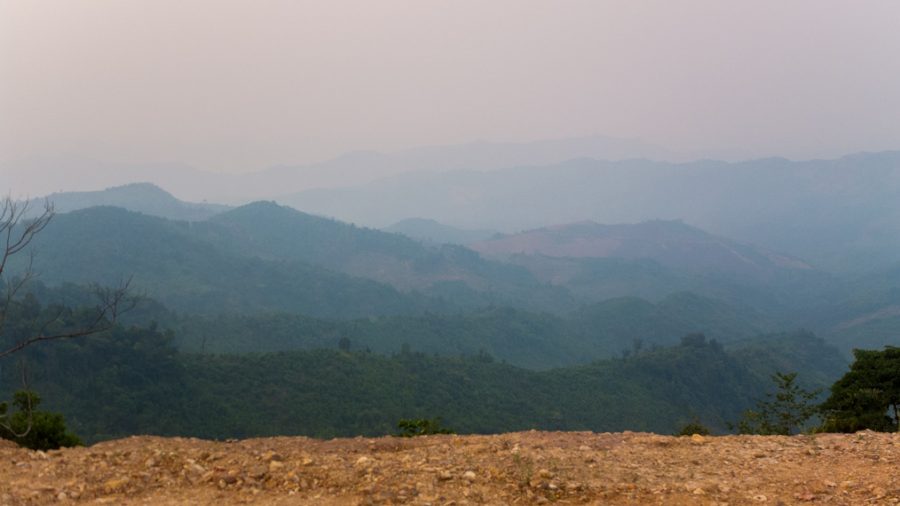 Another two hours plus later I’ve finally reached the second summit of today. I also had the second and last opportunity to head towards Luang Prabang now which is a shortcut to get to the capital of Laos. My problem remained: Should I chose the short way or the detour to visit Phonsavan. Between here and where those two itineraries will join again there is respectively 270km (about 4 days) and 440km (about 7 days). Rah! Let’s do it!

I don’t want to regret anything. Phonsavan has a place to visit which seems interesting. This is called the “Valley of Jars”. Plus, if I got there, I might have the chance to see Stéphane again who is on his way to Vietnam. We could see each other when he would be cycling north and myself towards south. That’s at least two reasons to try this way. Let’s continue east for now.

When I was still riding along the crest of that big hill I passed through small villages. I thought about stopping nearby especially because I’ve seen some water supplies. I thought I would have the time to reach the river side again so I kept on going until I got caught by the night. The road did not really continue downhill. There was up and downs, the surface was mostly gravel, I was tired… I had to stop somewhere. After one more downhill during my expectations to reach the river rose again, I was abruptly stopped by another uphill. This time, that was enough.

On the right hand side of the road, there was an area where electric poles had just the right distance for my hammock. I thought: “That’s the opportunity, let’s take it”. During I was unpacking my stuff I briefly heard the sound of a storm coming. That’s not good. I accelerated pace. Shortly after the wind joined the party. That’s not good at all. I will have to set up my camp very carefully because something is going on. I didn’t have the time to install completely the roof that some rain came along. I must be quick before all my stuff get wet! Quick quick! The ground was not flat which is not really important with a hammock but I had another problem. Just between those two poles grows spiky plants. I knew I had to get rid of them because they would damaged my hammock once I will lay inside. The spikes were all other the plants so I could not grab them. Fortunately I found some cardboard around and fold them on the ground before cutting them at the base. During I was gardening, I could still feel the storm approaching slowly. The free shower is coming! I just need soap :-)

Finally, the campsite was ready, my bags were closed carefully, the bike was locked. It took me some time to adjust the tarp and make sure the pegs were strongly and deeply pushed in the ground. I did not bother cooking some dinner because the wind was already too strong. I would have waste so much gas trying to boil water. I just hoped (carefully) in my hammock and ate dinner like this.The menu was: one packet of dry noodles with a cucumber, some biscuits and water.

It took about another 30 minutes for the weather to get worse, a lot. The storm definitely headed towards me. I heard the thunder on two different places. Is there two storms at the same time?! I guess so. Very soon, that became impossible to sleep. The wind became very strong, the rain reached the hammock where the roof had some weakness. I’ve never ever seen that amount of lightning per second. It was like being a movie star walking through the crowd at the Canne festival. The thunder was tearing the sky. Even if I pitched the tarp as carefully as I could, one of the pegs flew out. Suddenly I received a wave of water smashing onto my bed. That’s not good at all! Quickly, I unzipped the mosquito net, grabbed the flapping side of the roof and kept it as low as I could. If the tarp flies out now I’m in deep trouble. It’s going to be the worse night ever. It reminds me the night in Singapore, in the park where I finished sleeping in the public toilets after all my stuff got smashed by the wind and the rain. This time, I have nowhere to go. There is no shelter around…

For about 30 minutes, the two storms surrounded my camp, the winds tried many times to get rid of the roof but fortunately it did not work. Several times during that period, I’ve seen cars driving on the road. The people inside must have seen me but no one stopped to ask if I was fine. I guess, if I would be out waving for help I would get some help, I hope!

Finally, the intensity of the storm decreased slowly. I knew my camp would survive to this one but what if another storm later tonight. As soon as the rain stopped, I got out to verify each peg again. Unfortunately I did not find the one which flew out previously. I would check that the next morning. The humidity and the wind loosen most of the string lines that I adjusted again. I really hope the rest of the night will be quiet because this storm was heavy.

One more time, I’m looking for adventure, I got it!