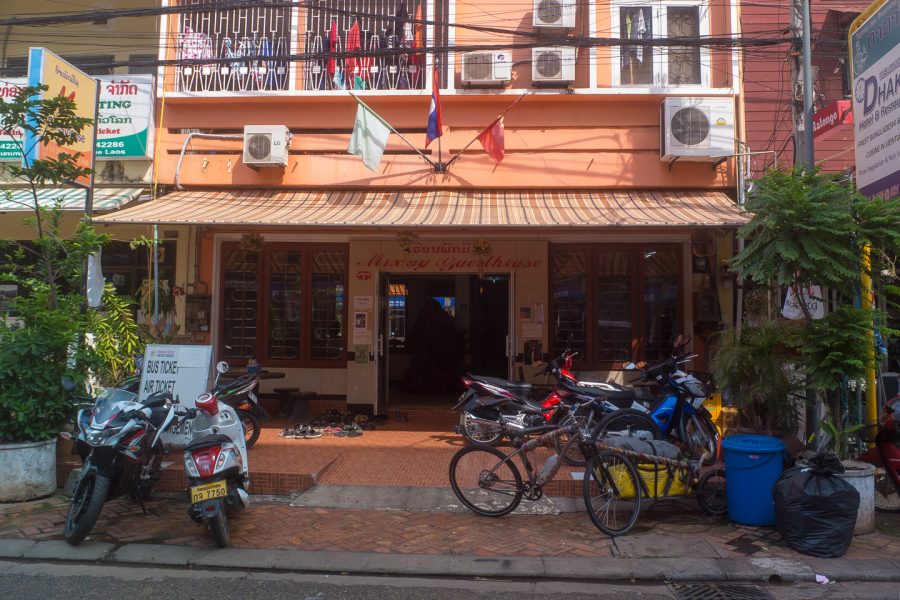 Finally, I’ve spent much more time in Vientiane than I thought I would. I didn’t visit at all. The few times I’ve been around the city was to get some cash, find a cheap place where to eat or just look for some specific shops. Everything in this city was a bit expensive compared to the country side. Once, I found THE nice and cheap restaurant, I came back their minimum once a day. They had local, Thai and western food so I could change everyday. That was nice :-) After each lunch, I came back to the guesthouse and worked on my laptop until very late at night. I thought many times about going out to take some pictures but I did not see any particular places. Everything was “okay”. It was a break on cycling AND a break for not taking pictures. I was very late on my blog too (like I am now) so I needed to catch up on that. Anyway, I’m leaving this morning, after nearly 3 weeks spent in a windowless small square room or on this terrace. I’m back on the road! The next step is Bangkok (again) where I will pick up my fixed GPS and apply for my Cambodian Visa. Let’s go! 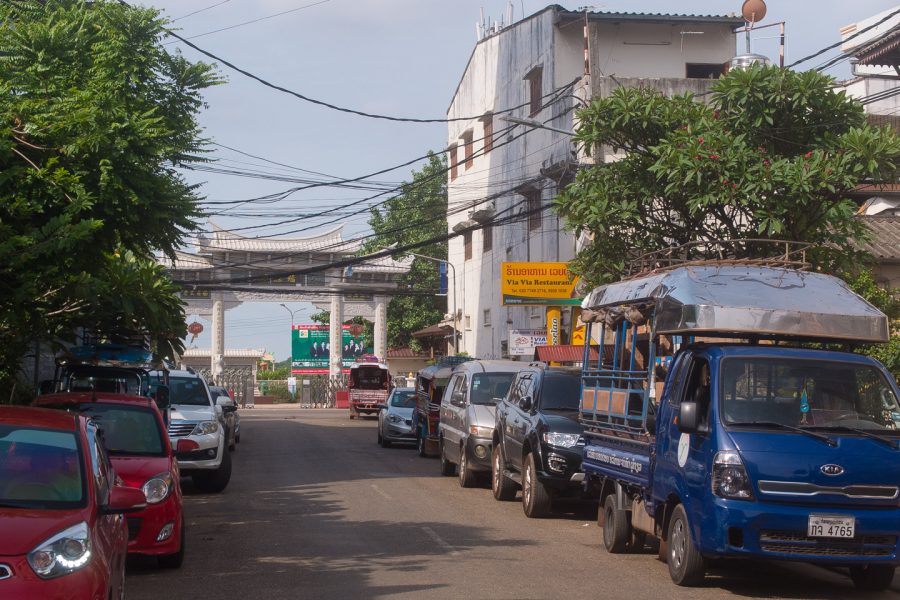 That’s the street I’ve walked everyday to get some food. At this end, there is the Mekong river a bit further down. If I turn right, I can reach the night market where I could buy cheap food for dinner. Every single day, when I passed along the Tuk-tuk, the men asked me if I needed a lift. I said “No” every single time but it didn’t change anything. They kept asking me again and again. Don’t you recognise me after 3 weeks, 3 times per day? 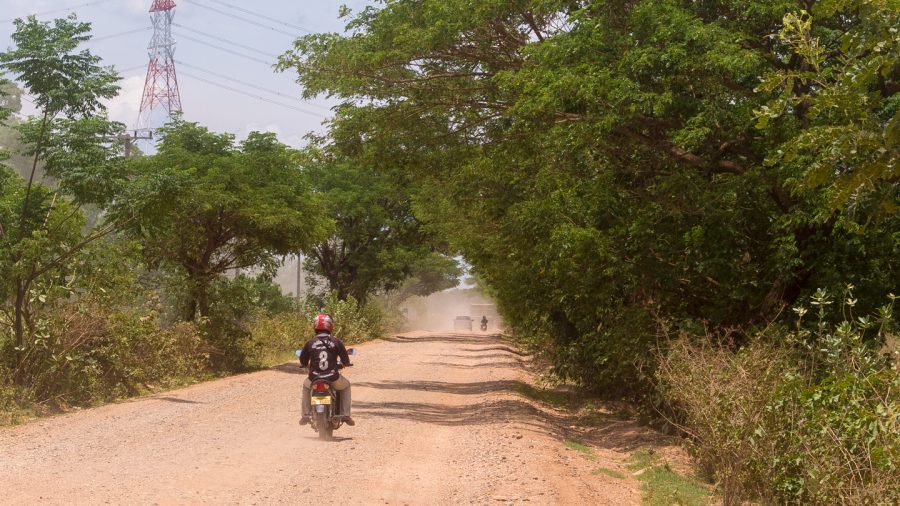 20 km later, I passed under the friendship bridge again and decided to leave the main road. Few kilometres after that, the sealed road let place to a gravel and dusty road. In fact, lots of trucks drive here. Once more time, a mask is very useful. 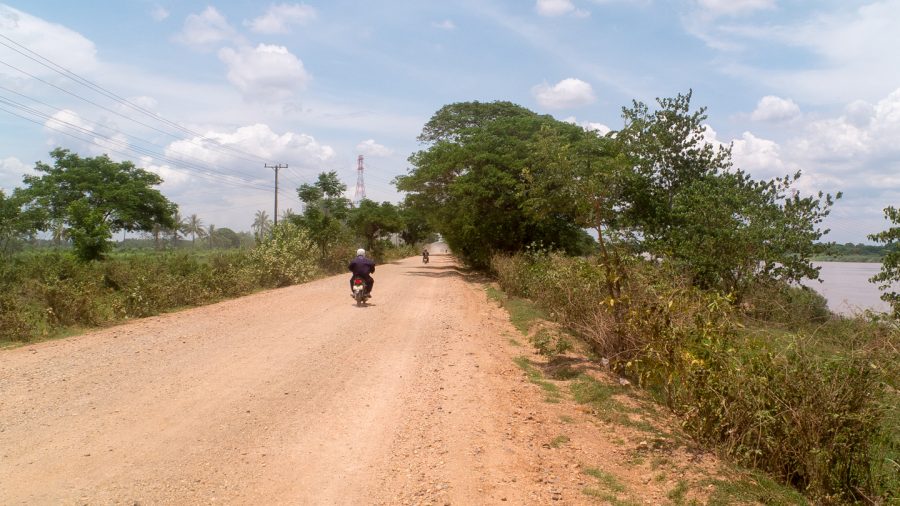 At the beginning, I thought it would last only few kilometres but that’s not the case. It’s dozen of kilometres… Aie! 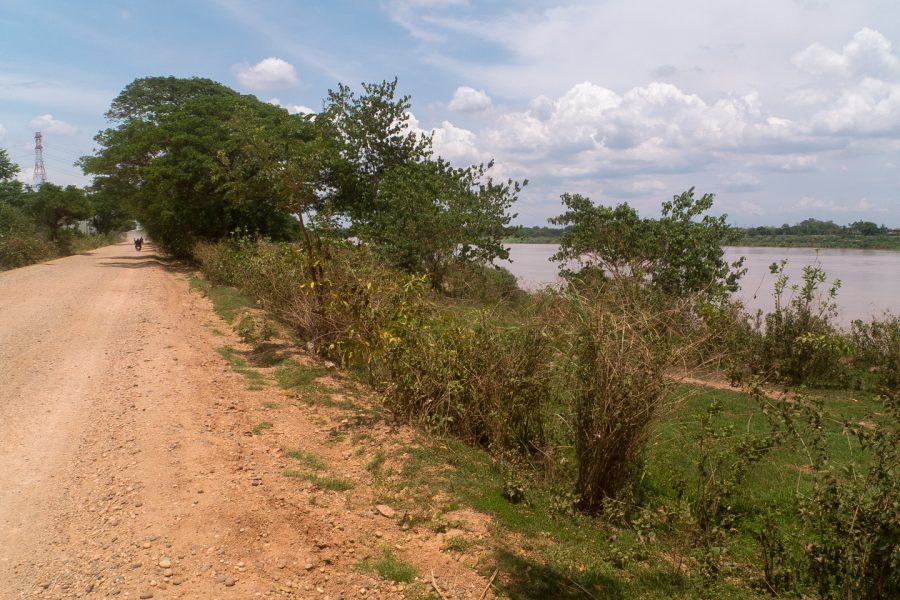 At least, I can have a look at the Mekong river and Thailand sometimes. 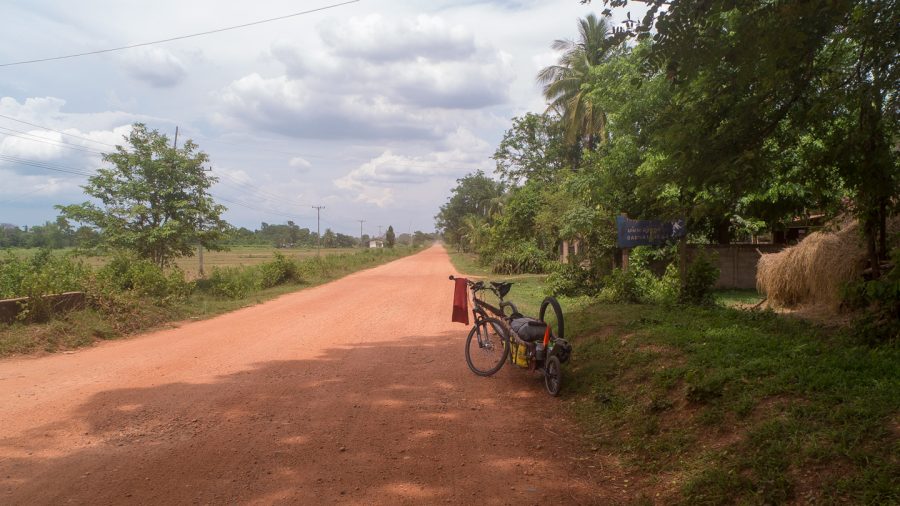 I’ve started at 9am this morning, pretty late. I couldn’t woke up early this morning after 3 weeks sleeping around 1am every day. If I want to be on time I must cycle 70km per day. That’s why I’m still on the road now. Tomorrow morning I will be more serious. And after tomorrow, alarm at 5:20am! 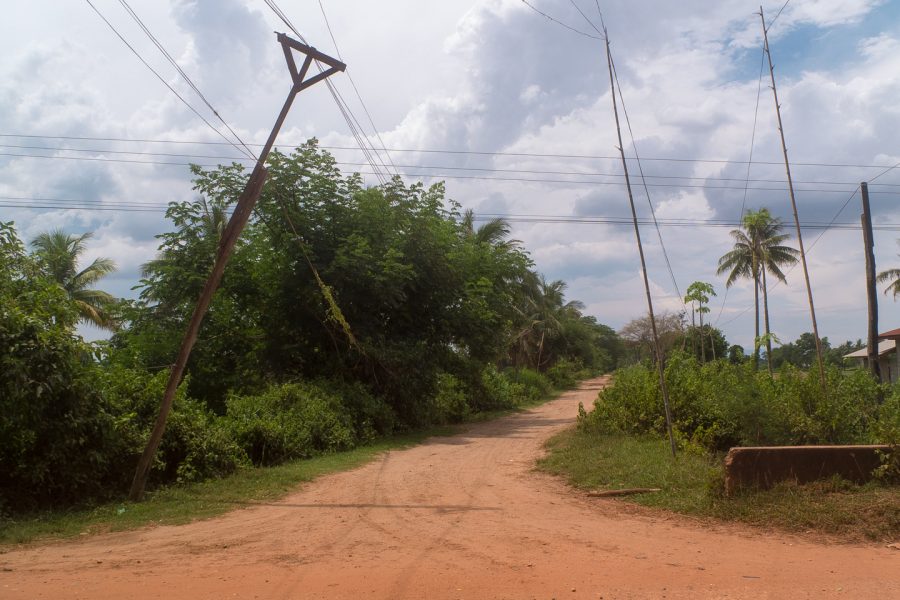 Is there something wrong in that picture :-) What kind of pole you would choose? The wooden one? The bamboo one? The “falling soon” one?

Finally I reached the sealed road again. I did turn earlier than planned to get on a nicer road because the other one was too dusty. I stopped for lunch at a small very local restaurant. In fact, it had only one table. A mother with her two kids served me some rice and two sweet sausages like they commonly do here and in Thailand. She gave me some fresh water and refill the pot once as I was very thirsty. She was very nice. Later on, a guy came by and had a look at my bike. We tried to communicate using a translator but that’s always a bit limited. Then, the mother gave me two little green mango for dessert. I thought they weren’t ready yet but when I tried the first one it was very sweet and soft. Very delicious :-) Then the guy offered me two big bottles of water and when I was ready to go and asked how much I had to pay for the meal they said: “No, no. Free, it’s free”. It’s funny because Stephane, during his trip from the south of Laos towards the capital, so the opposite way, told me: “Be careful in the south because they like trying to ripe you off”. Actually, I’m not in the Southern part yet so that’s why. Thanks guys! 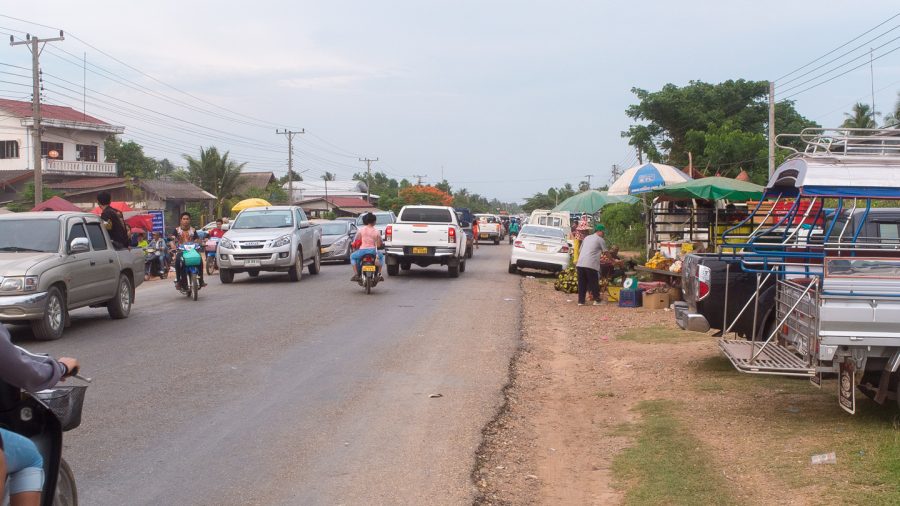 There is a kind of party or festival going on here. Just few minutes after that, some people launched a huge rocket that tore the sky. It went hundreds of metres high and made a tremendous noise. Clearly there is something special today.

Finally, I cycled more than I had too today. This park on the side of the river looks good. 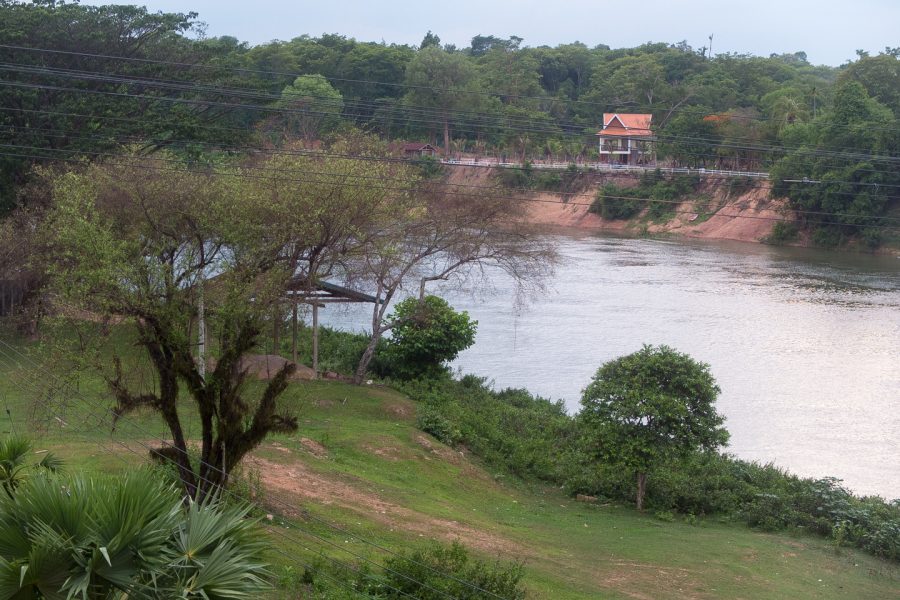 That shelter down there looks even better! Let’s have a look. 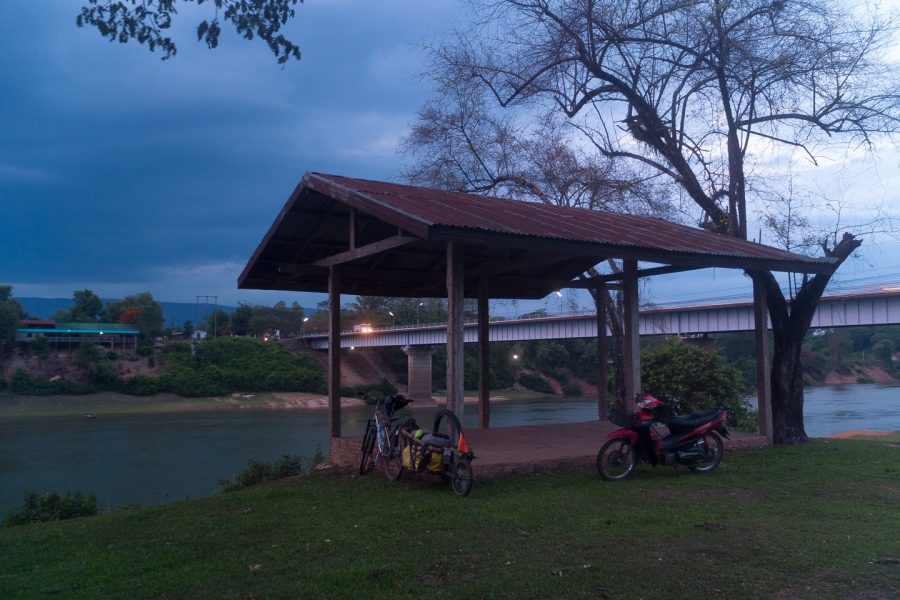 An hour later during I was quietly laying in my hammock, the wind blew in a way that I knew a storm was coming. Effectively, very dark clouds charging with strikes were coming this way. I packed everything (again) as quickly as I could. I did not have the time to set up the tarp that the rain arrived and soaked everything. Fortunately, I had anticipated. Another 30 minutes later, the storm was away and I could setup my hammock again.
When I was in Vientiane, it rained maybe once per week. Now I’m on the road again, the rain comes back straight away. That’s bad luck or what?