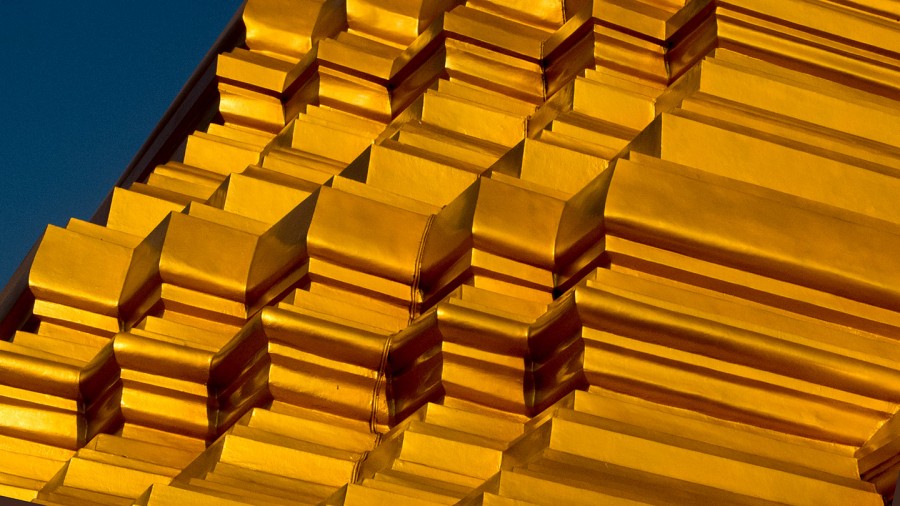 What is that? A Pile of gold? Nope that’s a temple :-) Today we have visited only one place early morning. A part that, we cycled on the smallest roads as possible. The temperature rose certainly above the 40°C around midday. It became very hard to cycle and even to rest. The break time was too hot as we did not find a very good place.

Last night was OK. I did not dare to set up my hammock in that super clean place the monk offered us to sleep in. We could use mat and slept on the tile floor. That was a firm night as you can imagine. Surprisingly, it’s not that uncomfortable. It reminded me Shen (who I met in Malacca) who purposely slept on hard surfaces. He explained that it was part of the “Paleo” lifestyle (like the way of eating non processed food or having cold showers). Apparently, it’s good for the back. The first time I’ve had this kind of experience was in Indonesia when I had been invited by students. They slept every night on a simple carpet. That night I copied them and had a surprisingly good night. 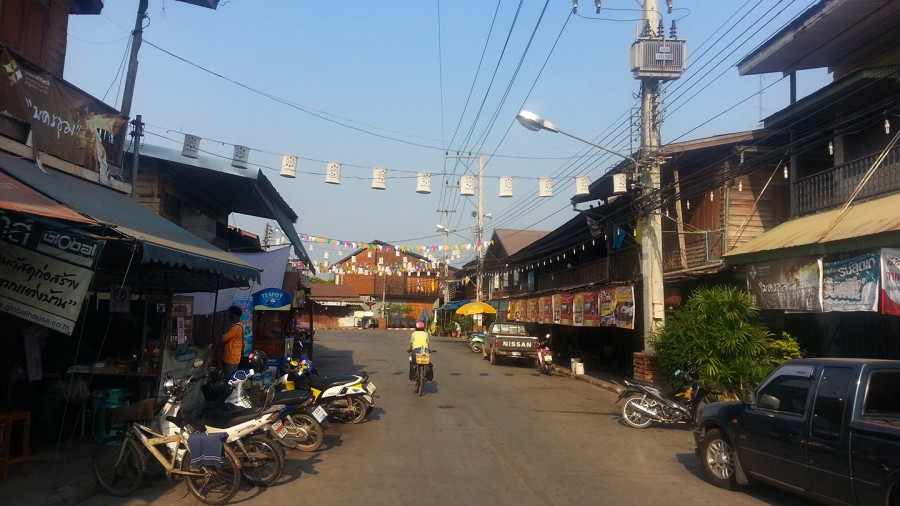 Back to this morning… We cycle through small villages and it’s nice.

In that village a passed front of this temple which is called Wat Phra Borommathat School. 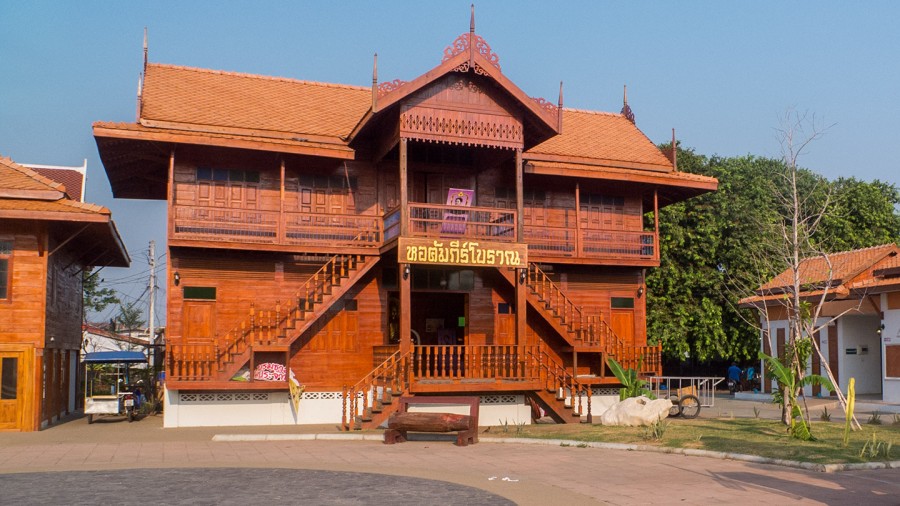 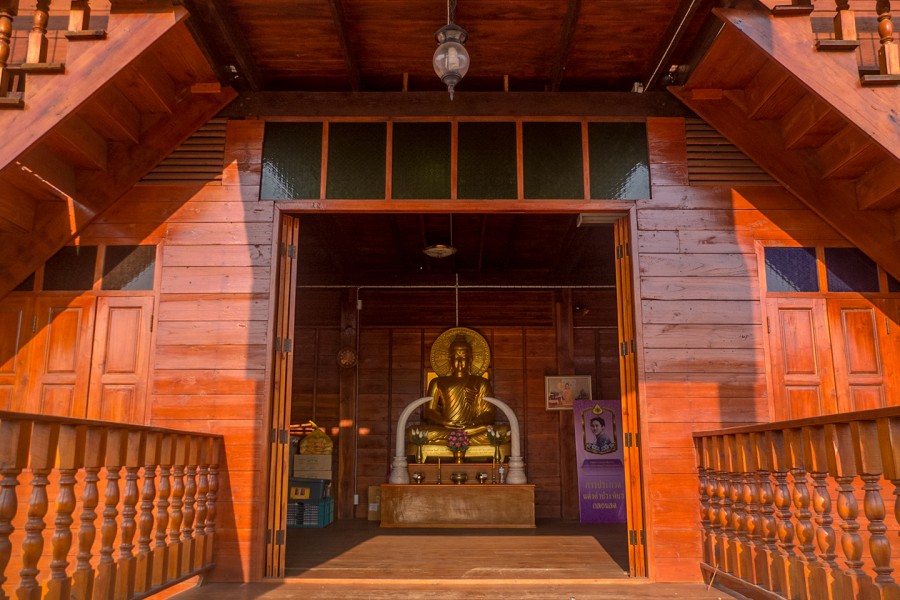 Buddha is resting in there. 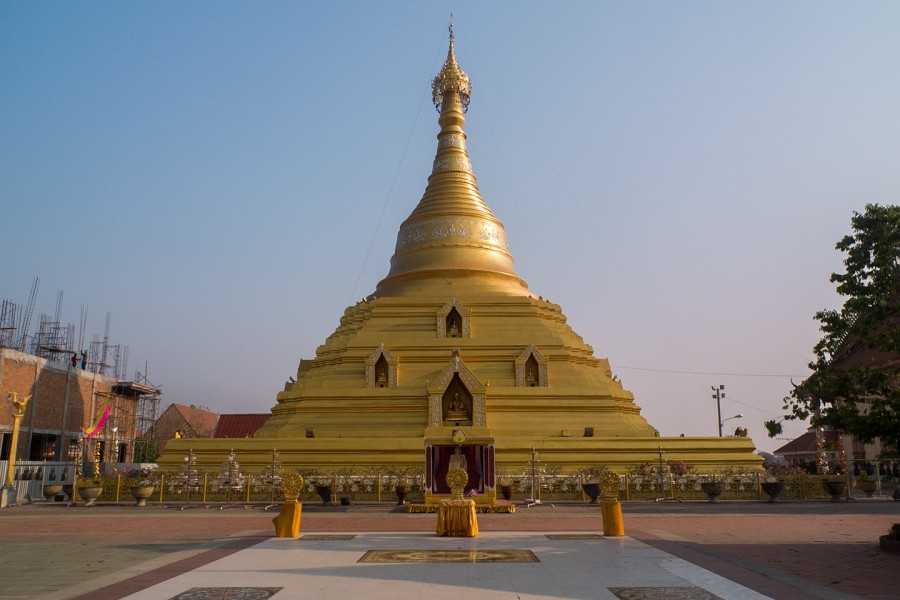 Let’s see that Chedi as they call it in Thailand. 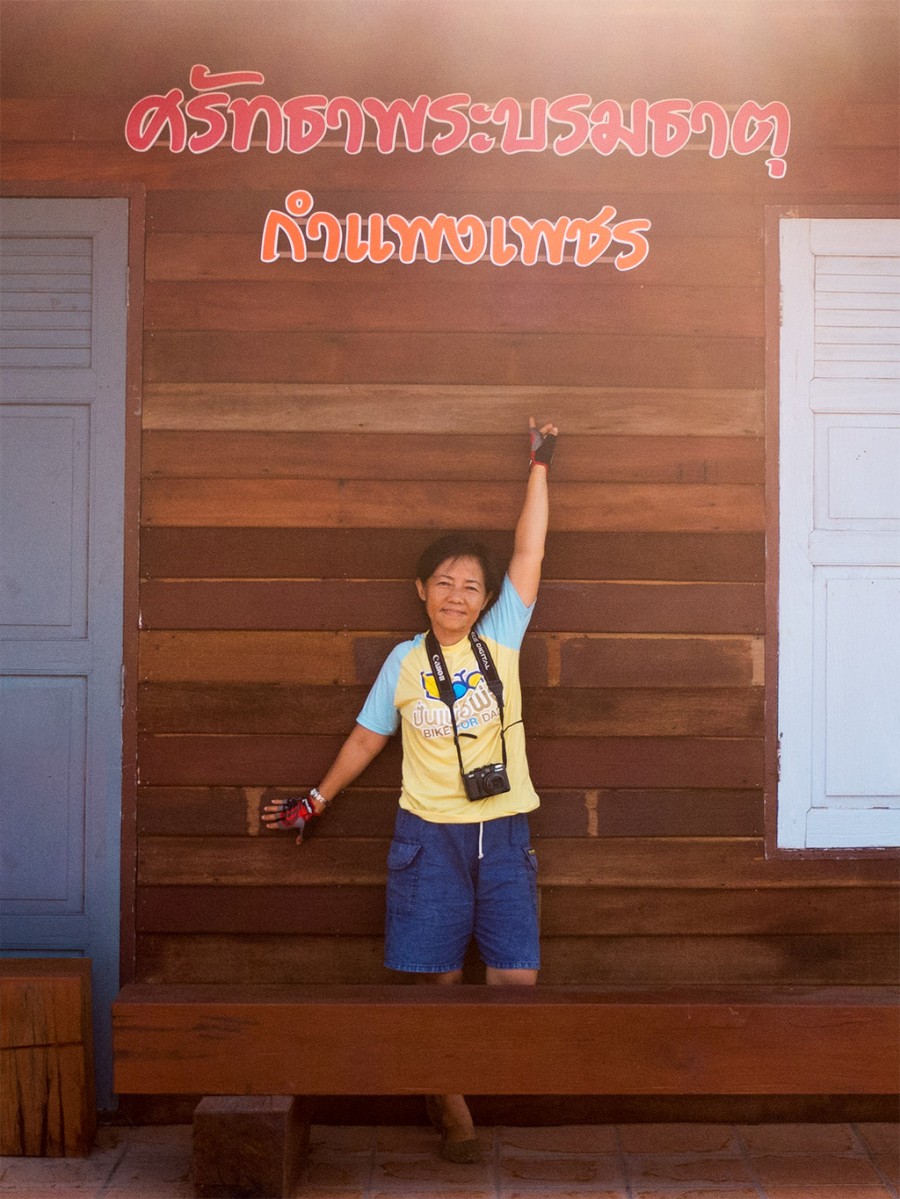 Pita pauses next to the name of the temple, well I guess because I don’t understand what it means. 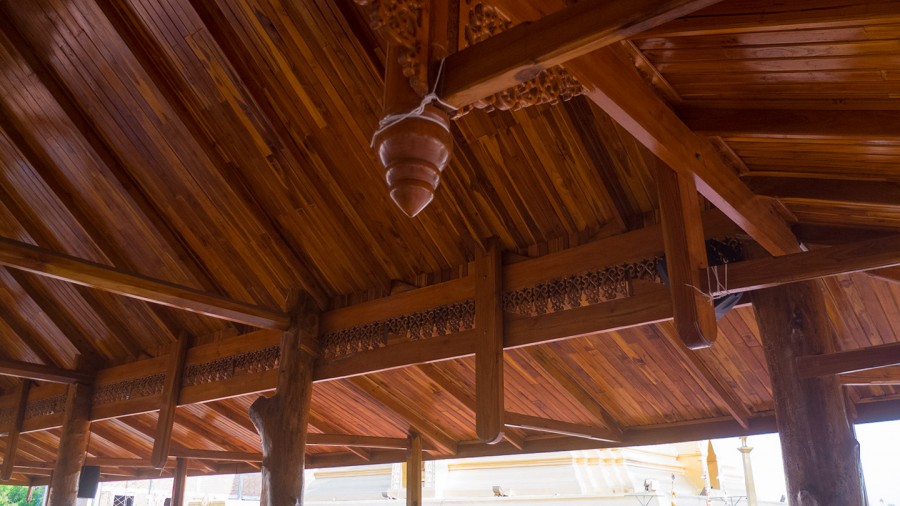 Another example of Thai word work and carving. 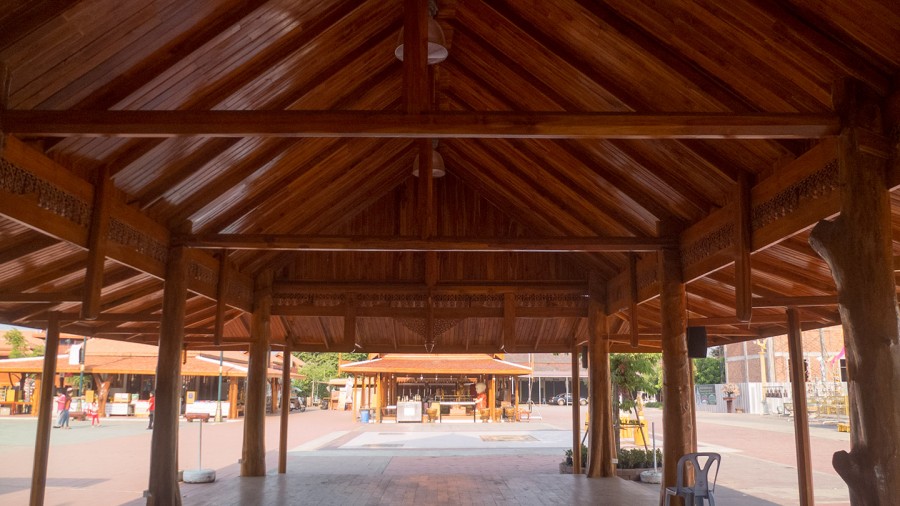 I like the way they keep the original shape of the trunks for the main poles. It’s very stylish. 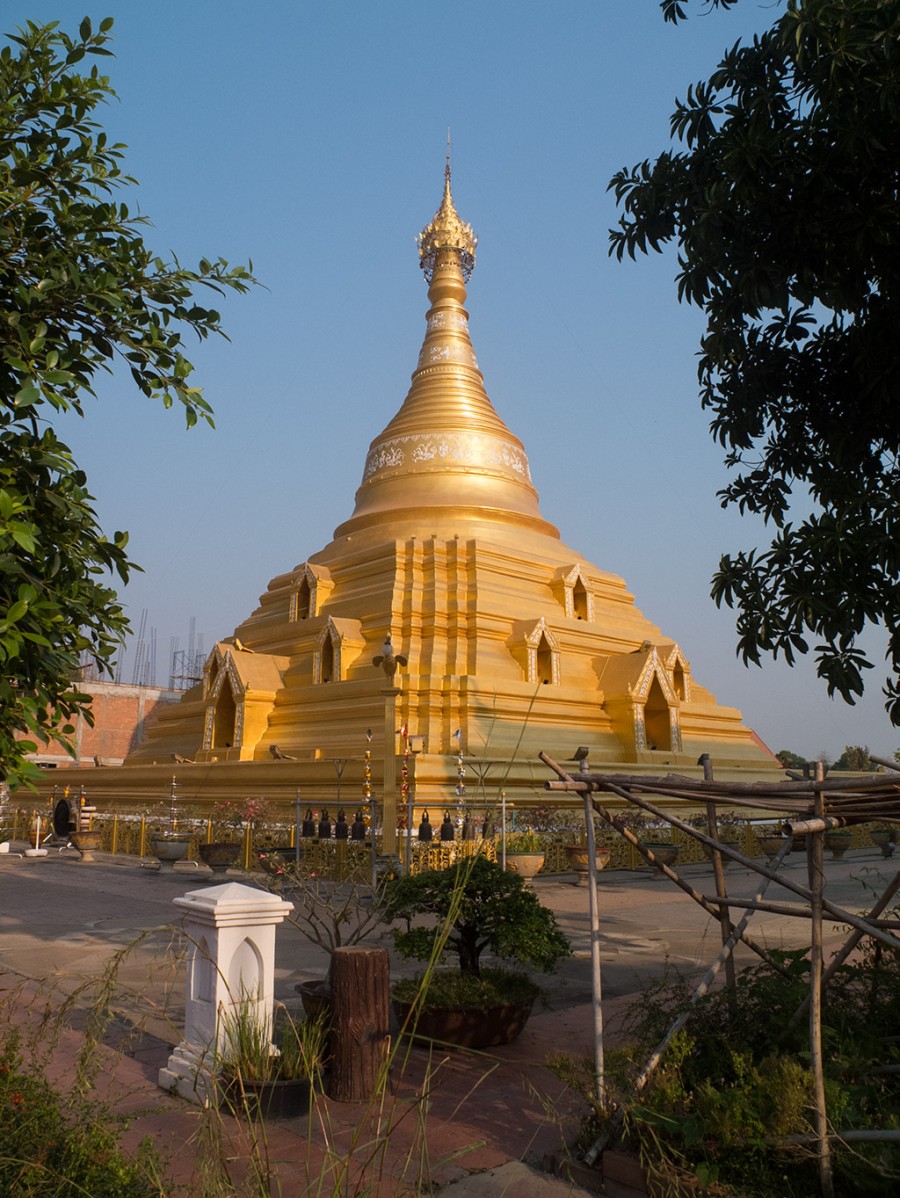 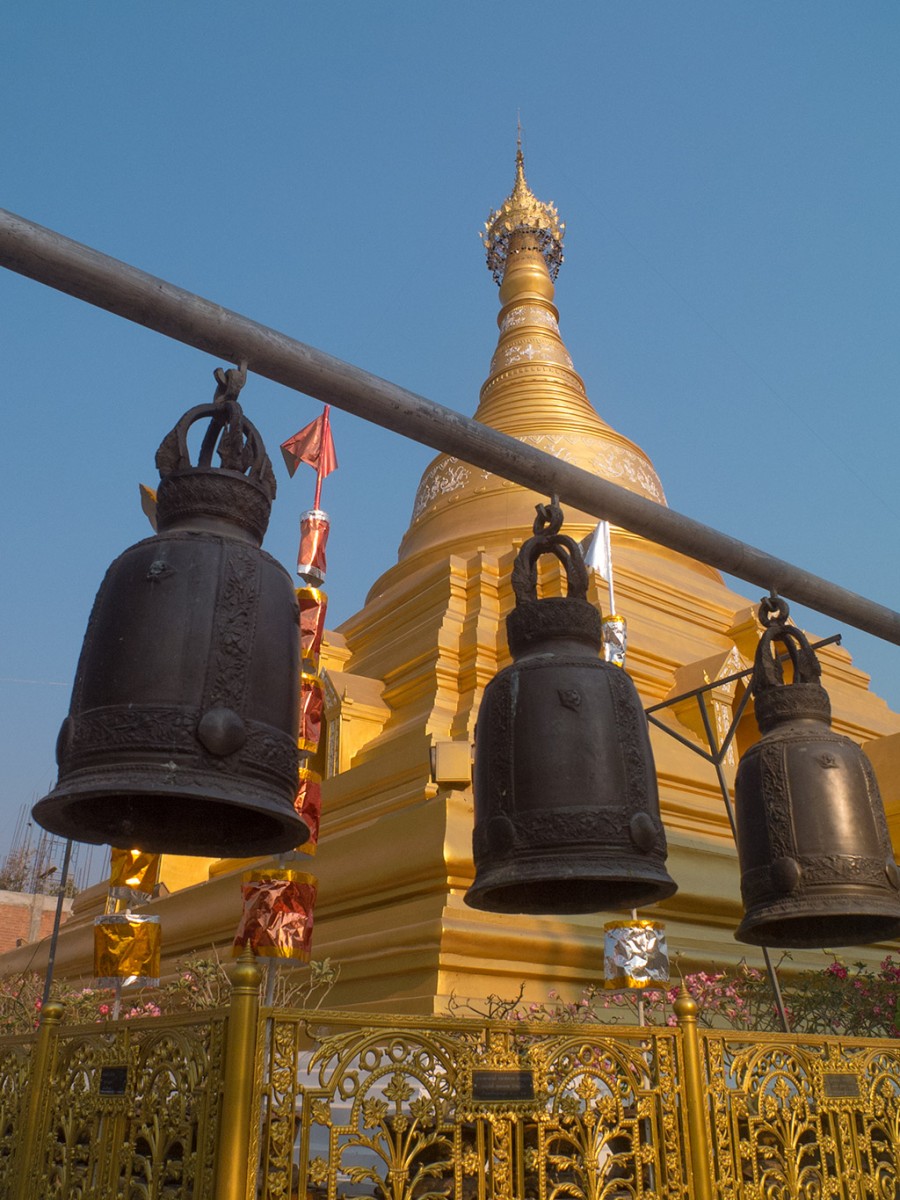 The bell symbolizes Buddha’s voice. It calls for the protection of heavenly deities. The sound of the bell equals the sound of the Dharma, or the entity or law, which sustains the order of things in the universe. Some sects of Buddhism call this the ”Mystic Law” as well. Depending on the sect of Buddhism practiced, these protective deities can exist outside the practitioner — more like minor gods in some religions — or represent a function of the higher self, called Buddhahood. In the latter case, the protective forces come from within the practitioner’s own life. For example, a good mother can represent the heavenly deity. (source from this page) 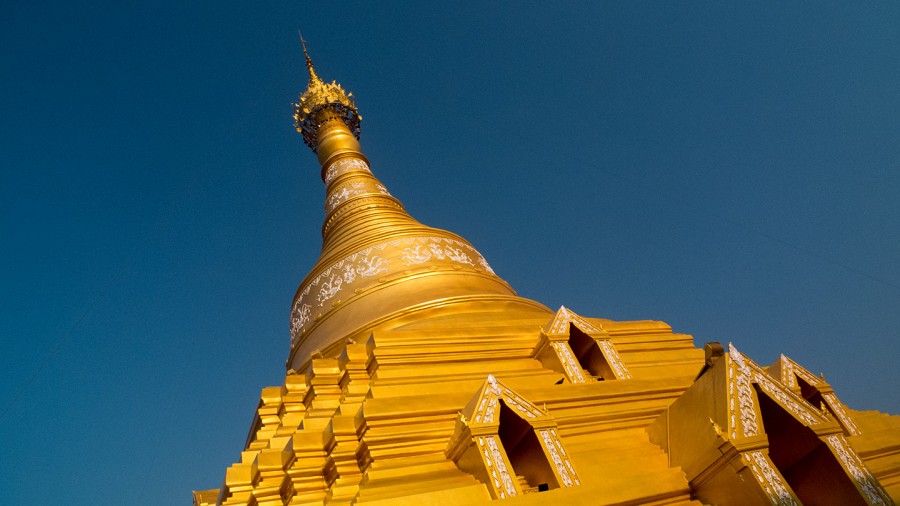 This Chedi is obviously recovered with gold. The smooth and warm morning lights enhance it super well! 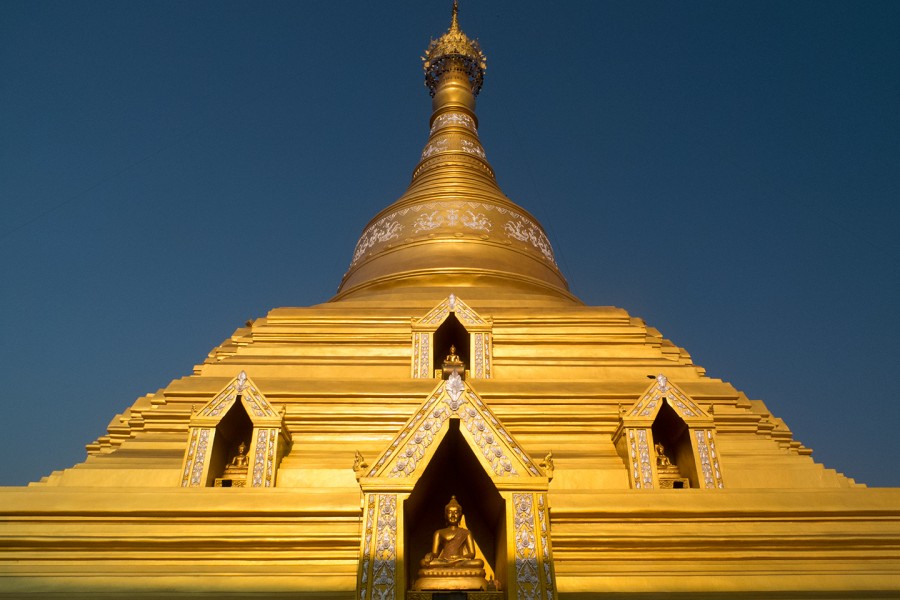 On symmetrical side view. 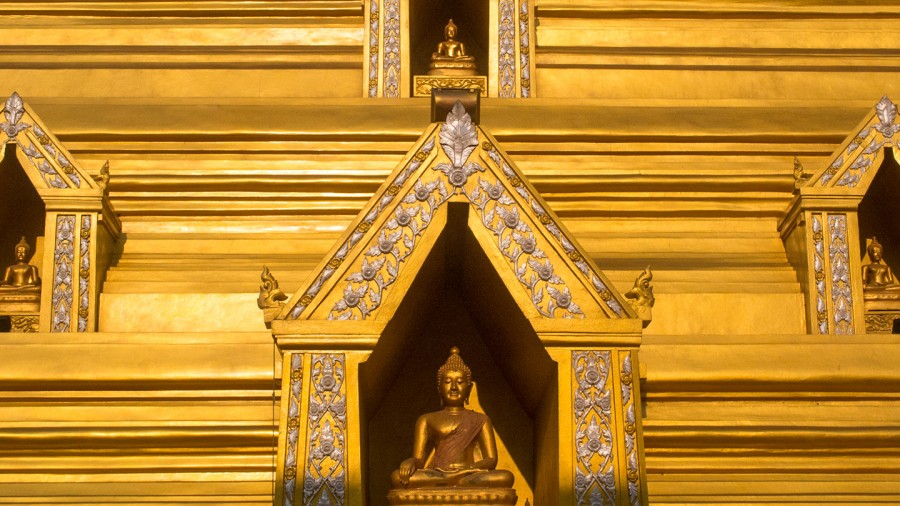 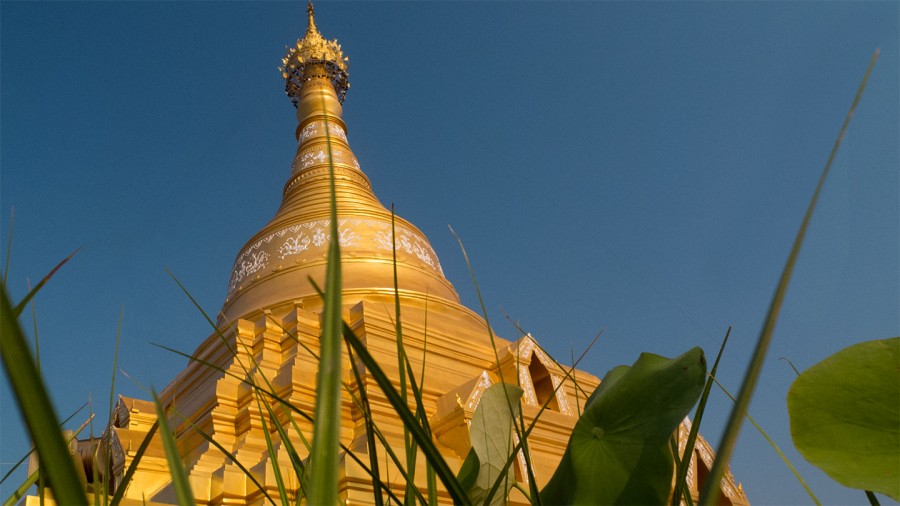 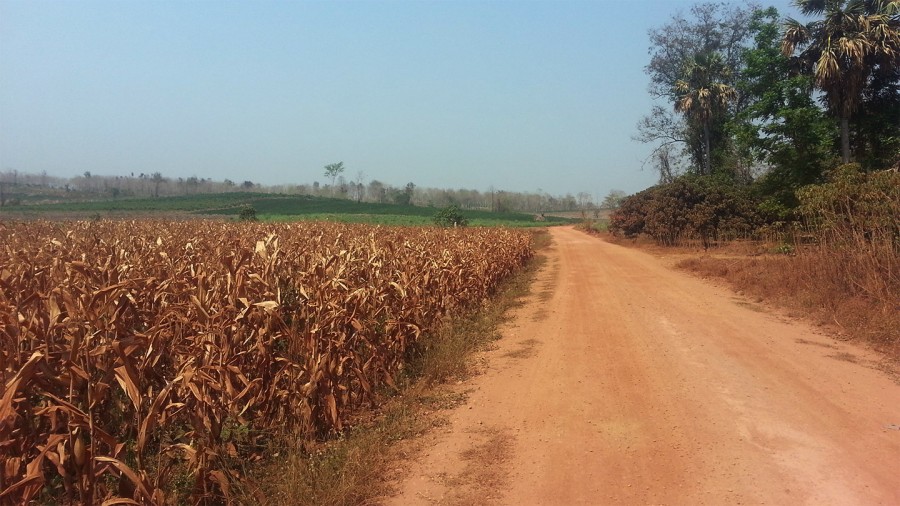 Back on the road, we attack now the gravel. You can see this is dry season. This corn is dying, at least, it looks like it. 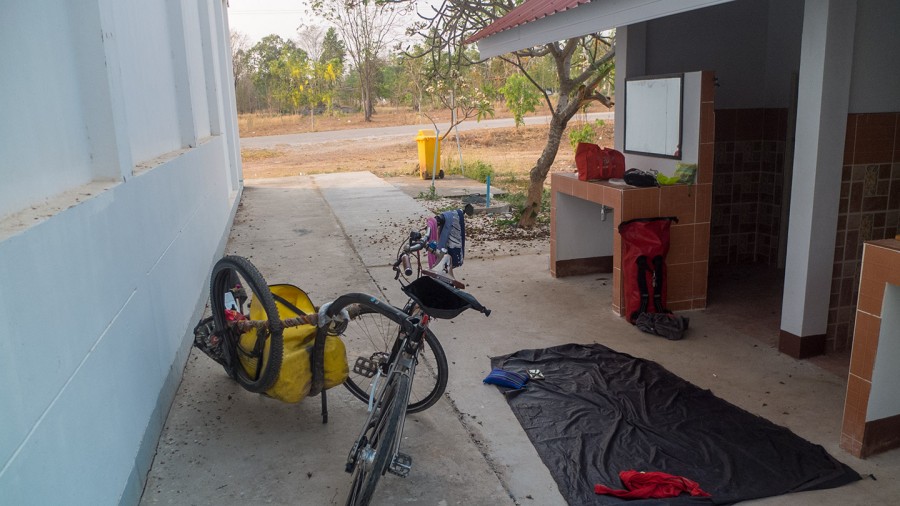 It’s very hot today. The gravel road we were onto became a bit rough at the end. It was even harder because of this barely supportable heat coming from “above”. We had some lunch under the roof of a huge hangar but no fresh air came in. After checking the map, I offered to cycle another kilometre to reach a National park. When we arrived in the area where this park should have been, there was nothing that looked like it… Damn it! We pushed a bit further to reach a temple but that one was such a tiny one that we had to find something else again.
Finally, we found that huge building with toilets on the side. These toilets don’t work but at least there is some shade here. Pita found the way to enter inside the building. I prefered to stay outside.

After the “hot break” we got back on wheels and kept following the Ping river which is something we do everyday now. Around 5:30 – 6pm, we stopped at a small temple to spend the night. The dogs in that temple were not very friendly. If we stayed quiet, no problem. But as soon as one of us would walk to the toilets (which made us cross the area where some dogs was resting) the pack of dog started barking again. The monk who welcomed us was friendly. I did not understand a word of what they exchanged with Pita so I stayed quiet and set up my camp for the night.
Something I did realised later is that this monk was going to sleep very close to us. Well, I should say that WE were going to sleep very close to him. In fact, this monk doesn’t sleep in the same building with the other monks. He stays in a tiny temple, next to Buddha and we are camping right at the front of that place. Until now, no issue at all of course. But when we decided that it was the right time to sleep, this same monk was in his room watching TV… No room is really close in Thailand because of the hot weather. The sound was not super loud but enough to be, a bit, annoying. Well, we cannot have always the best spot.

Actually, we could. The best spots are in the forest where there is nobody :-) See ya!