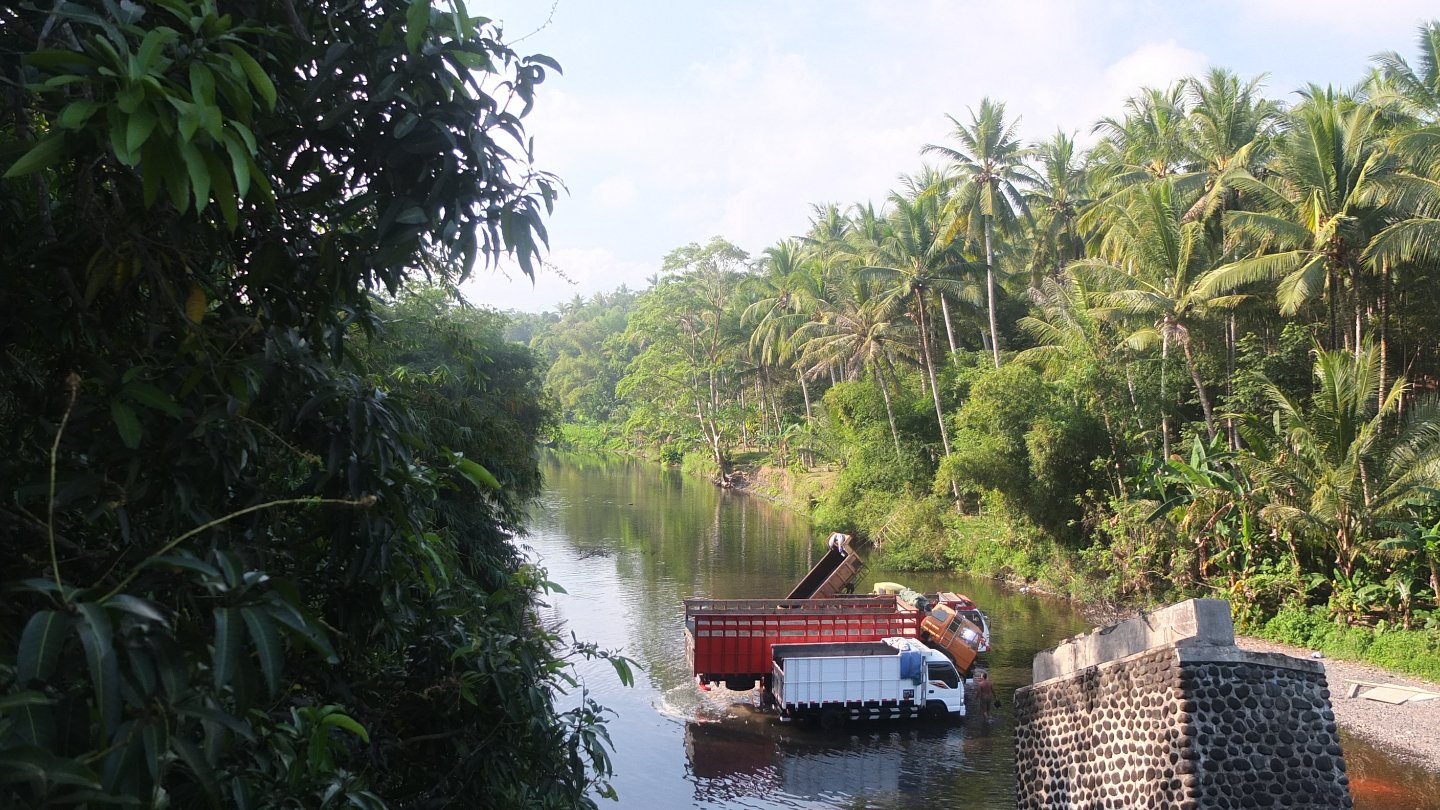 Okay, I know I’m late on my blog. As I expected to, Indonesia is different from France, NZ or Australia. I’ve been 4 days on the road and I’m trying to catch up with my diary. Contrary of what I’ve heard from Indonesia, people are very kind and I feel safe enough. The traffic is dense but each person, scooter, car, truck and buses take care of anybody on the road including me. They love horning to say “I’m here, I’ve seen you”. The most shocking thing I’ve seen since I’m travelling here is the rubbish. These are everywhere, unfortunately, especially in the rivers. Let’s start my first day of cycling in Bali :-) 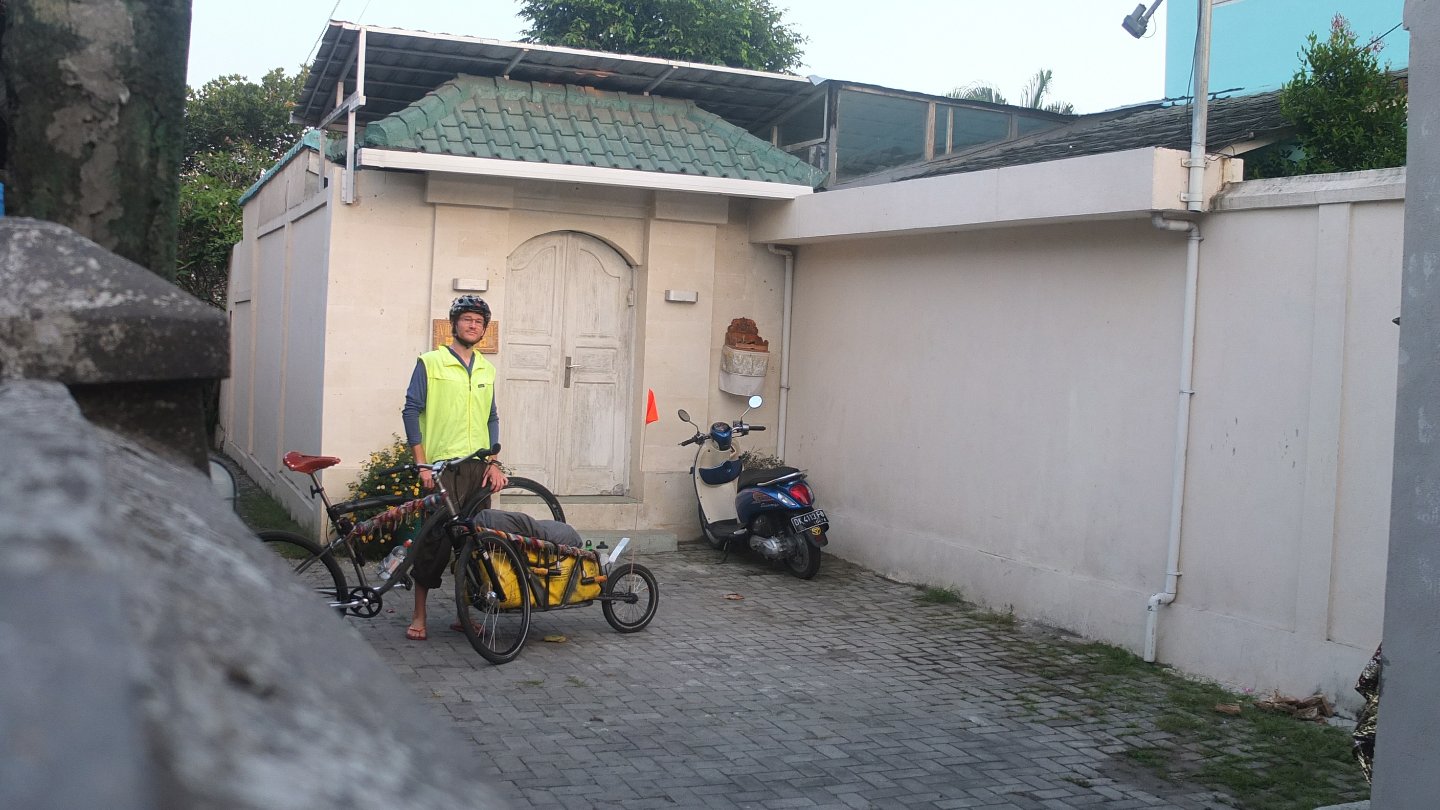 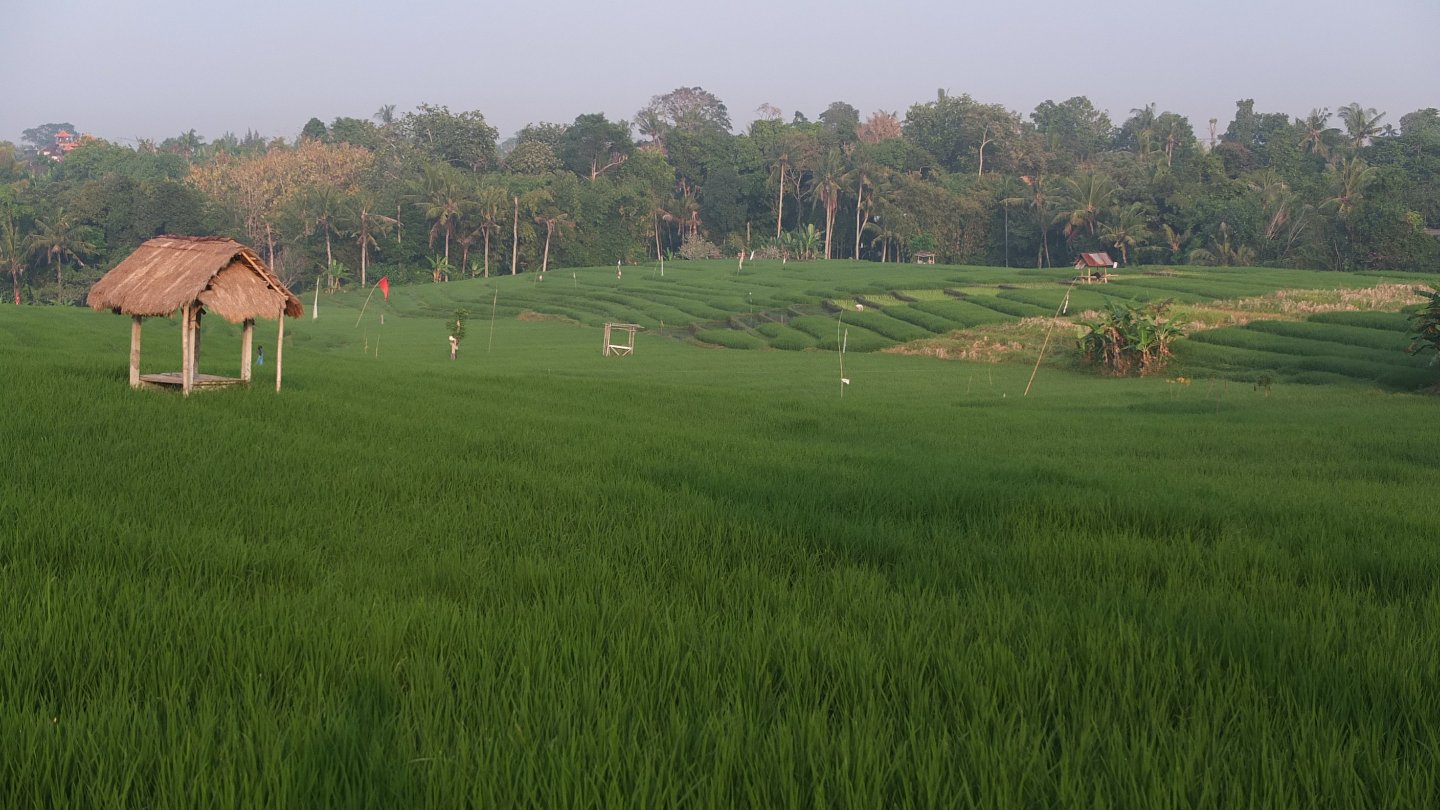 The west Bali landscape from the road. 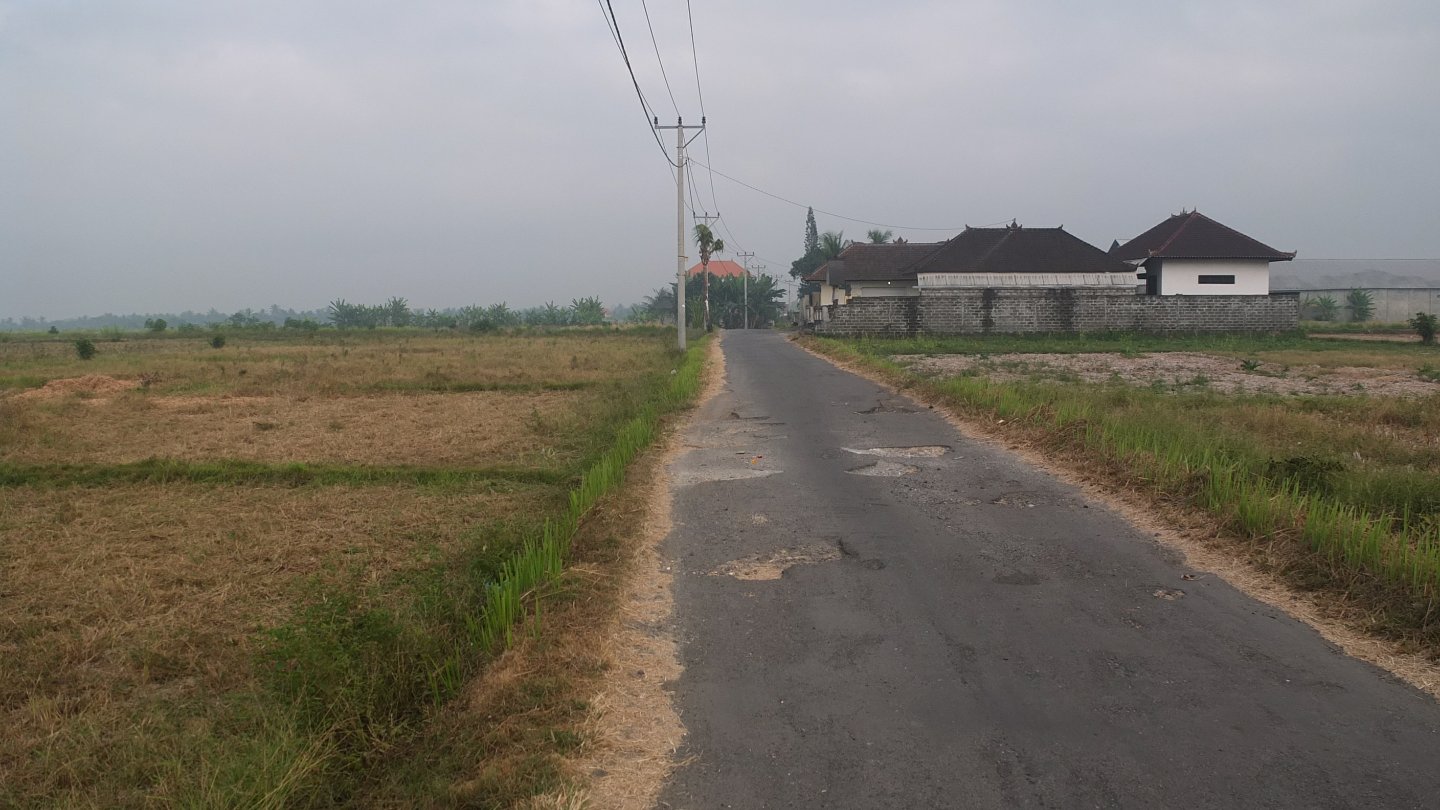 I try to avoid the main road as I know I won’t be able too later. The road is bumpy sometimes but it’s quiet. 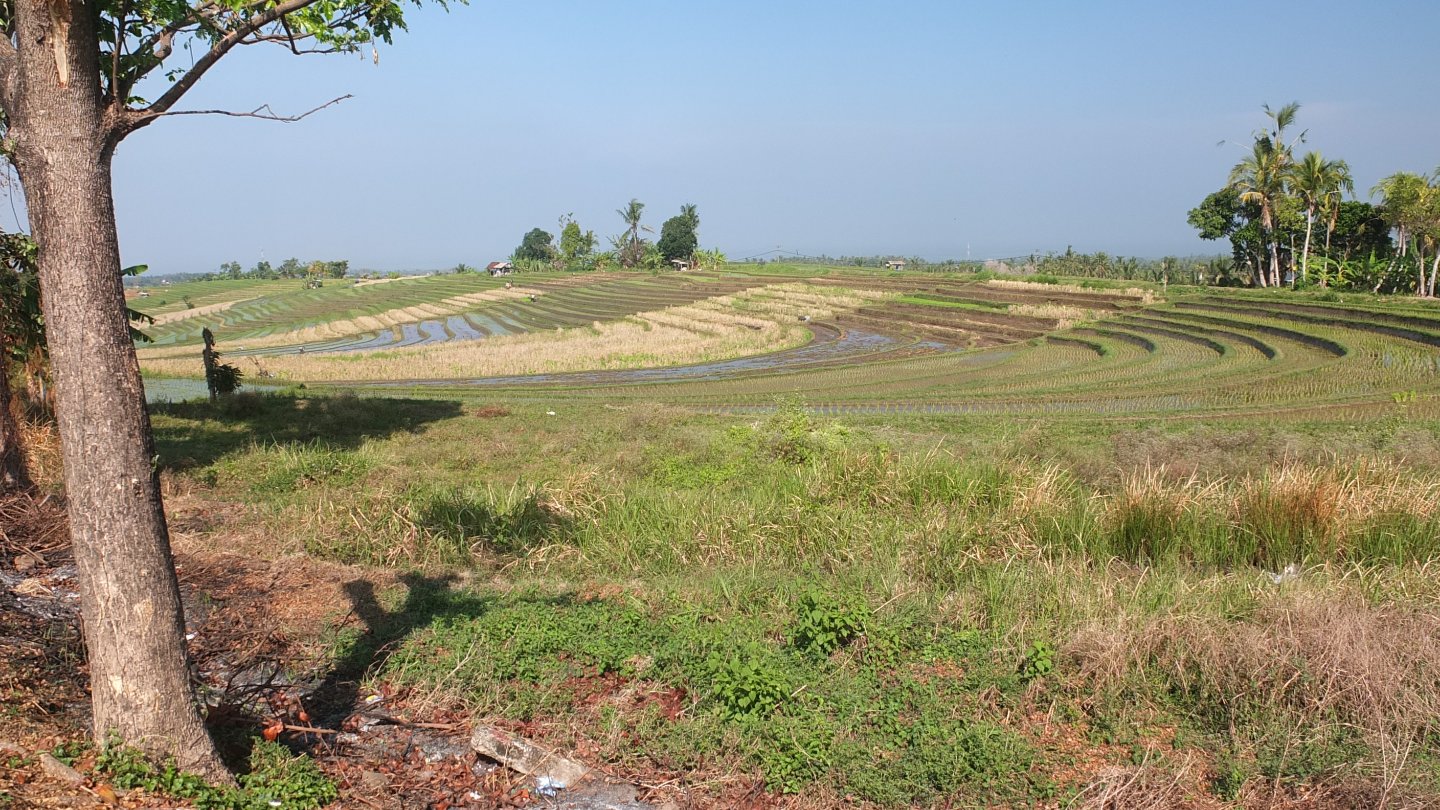 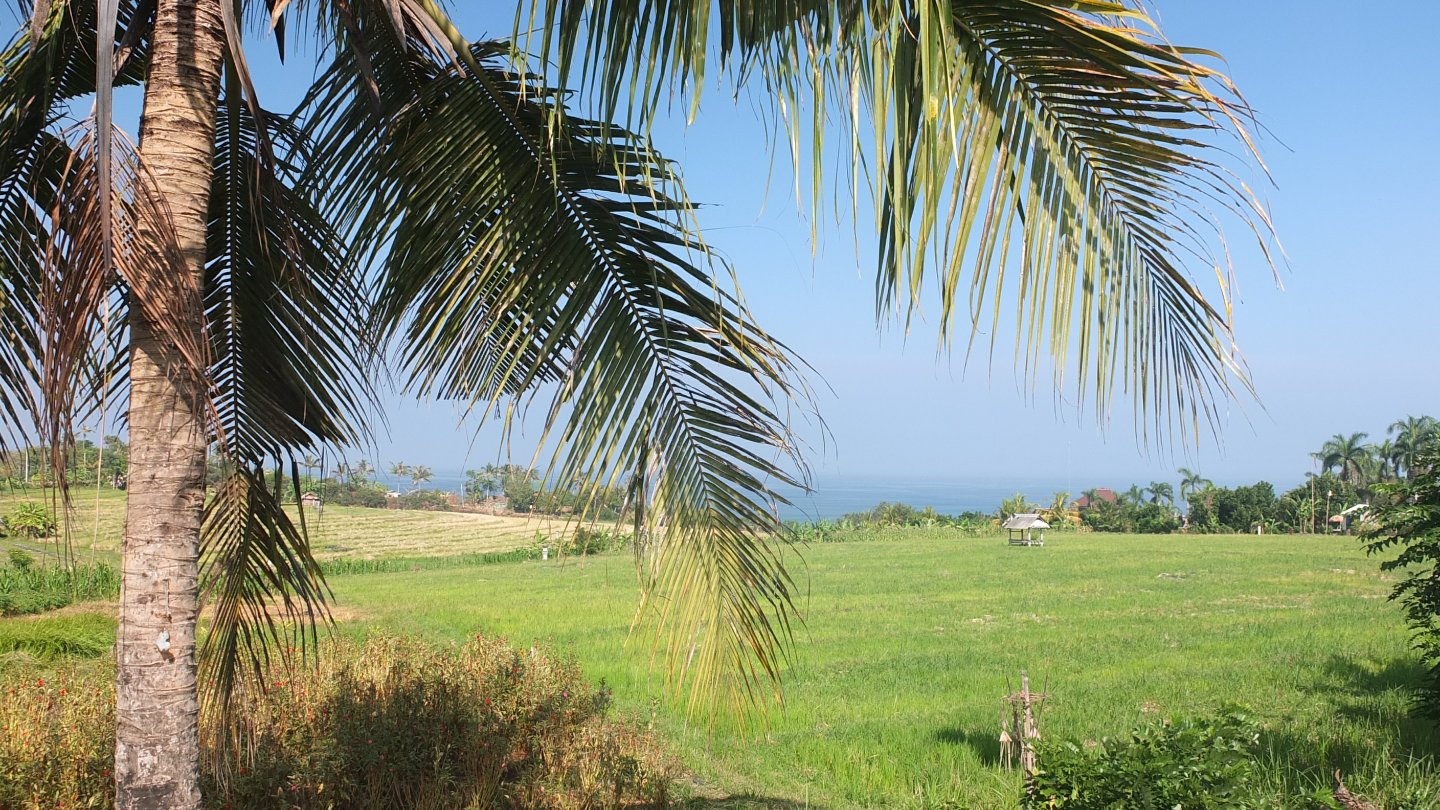 I’m now on the main road since a little while and I’m reaching the sea. 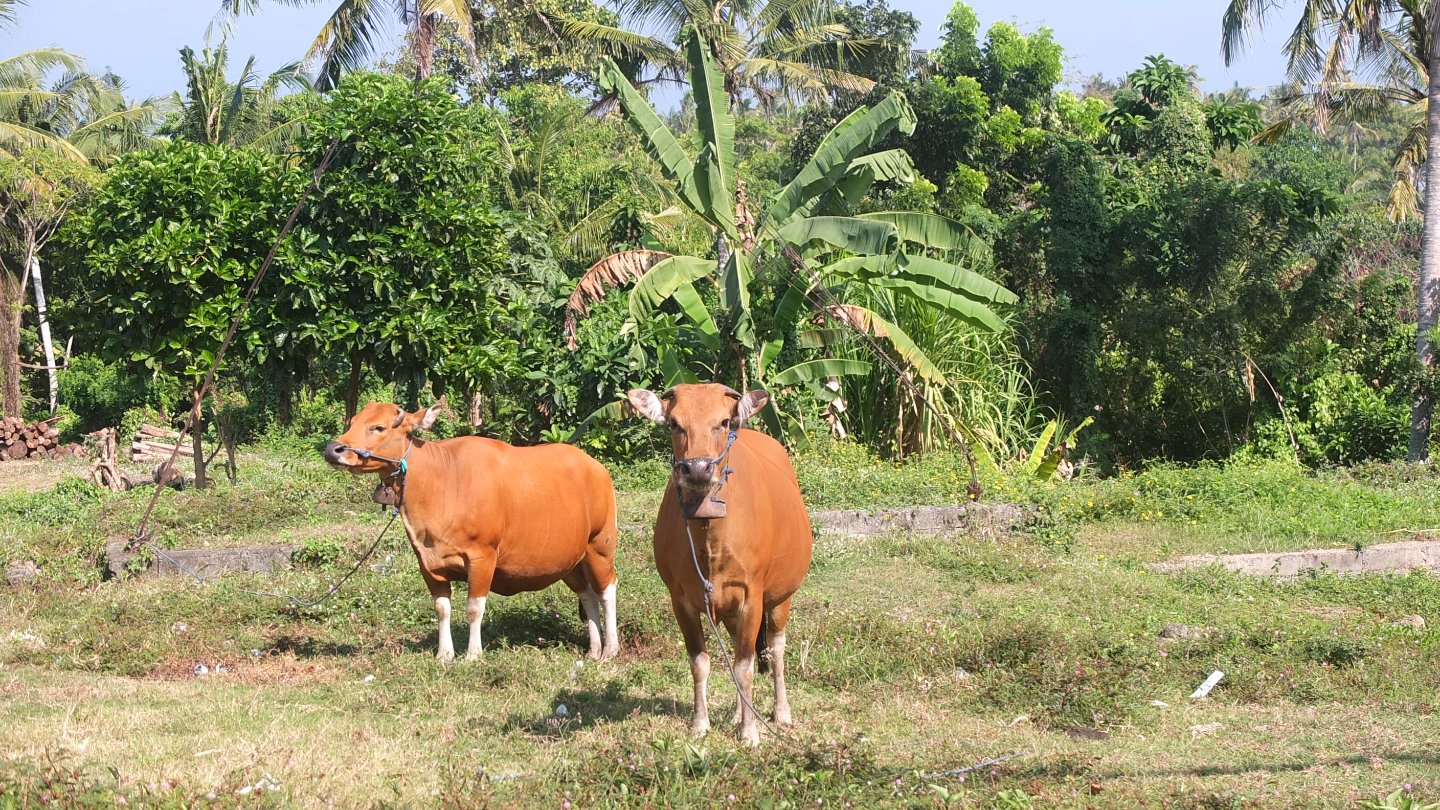 A short break next to curious cows. 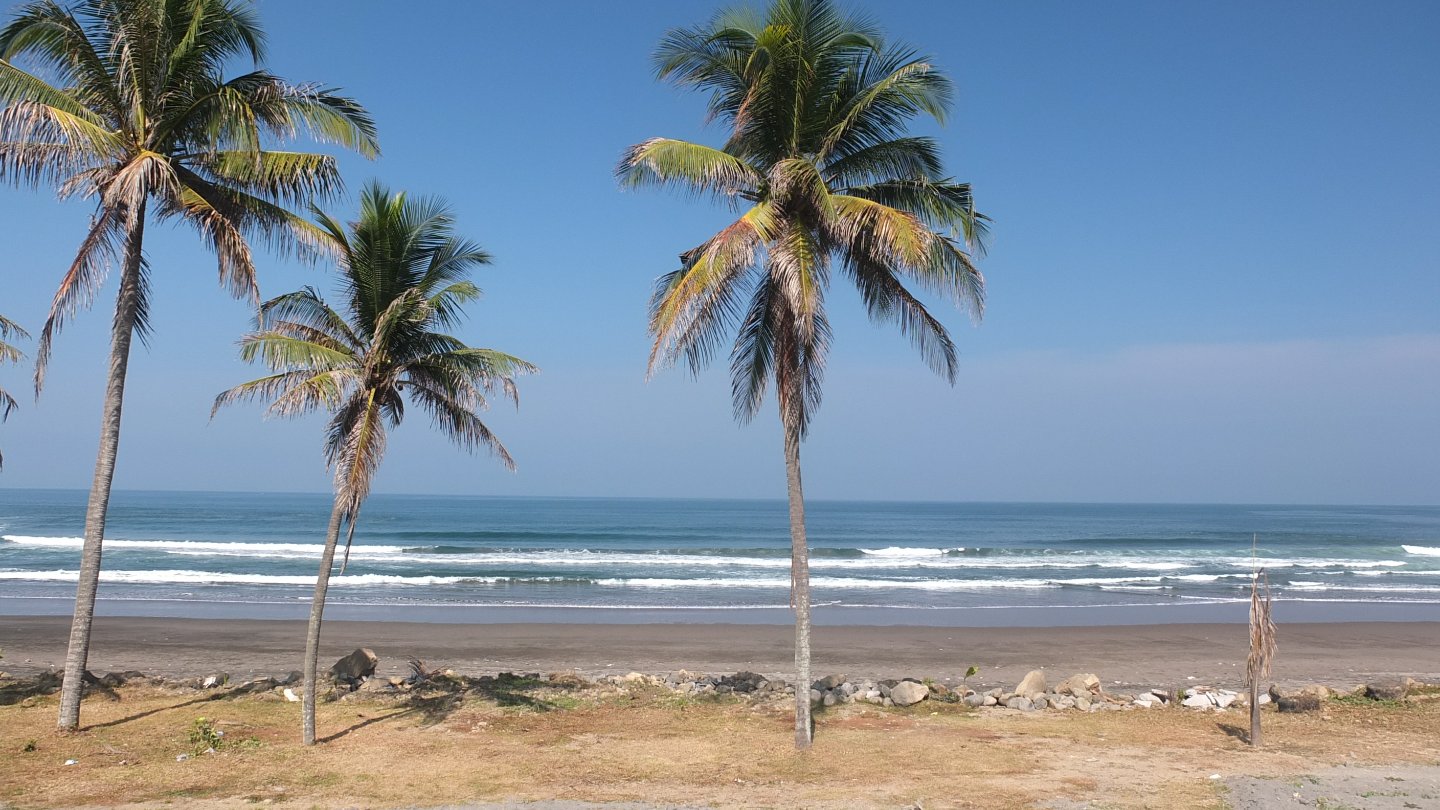 The beach and its palm trees :-) 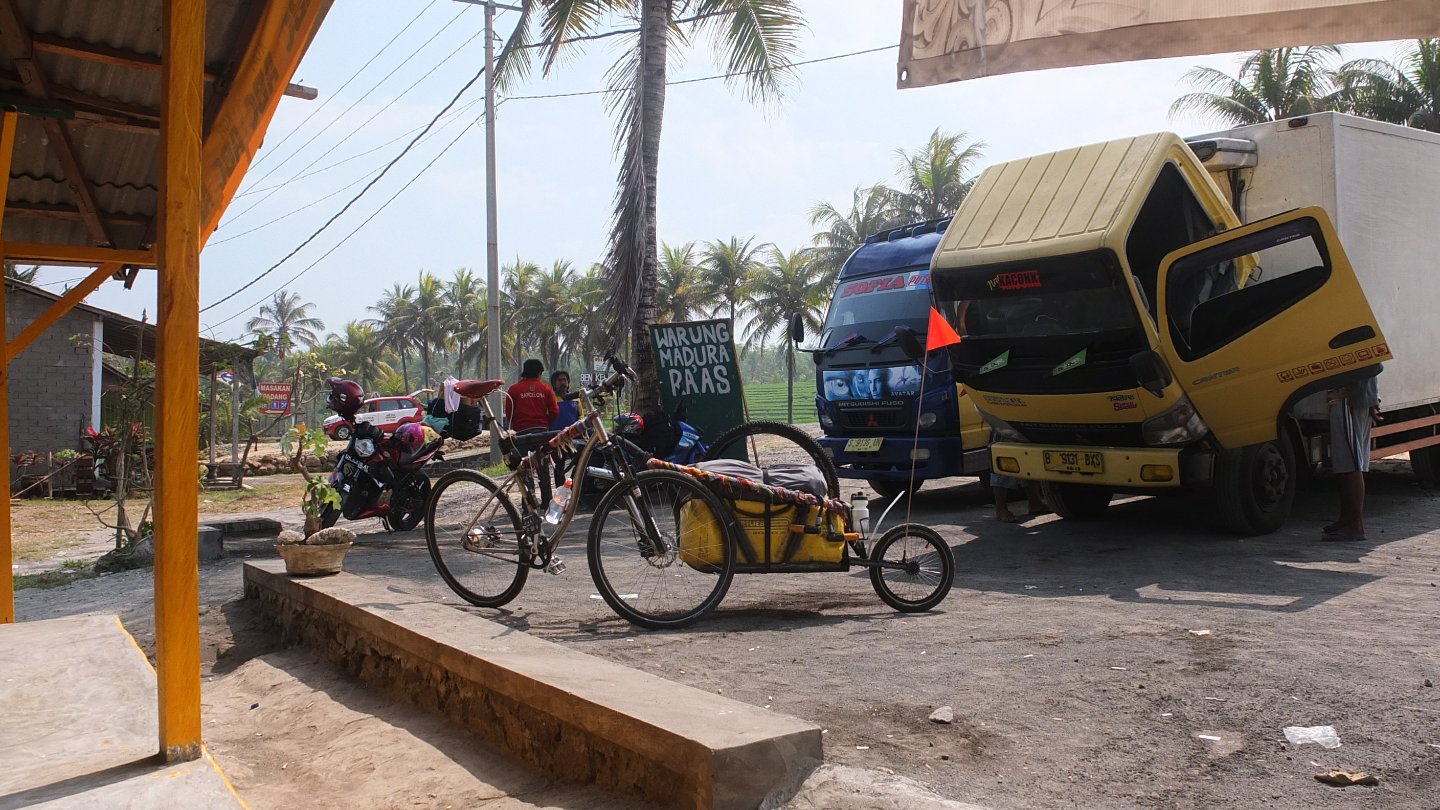 This is lunch time and I found a warung. This truck worried me. The guy started working on it so he put a tiny rock against the tire. If that truck wants to move  I’m not sure the rock will stop it. And if it doesn’t, my bike will be crushed. Maybe I should move it, just in case :-) 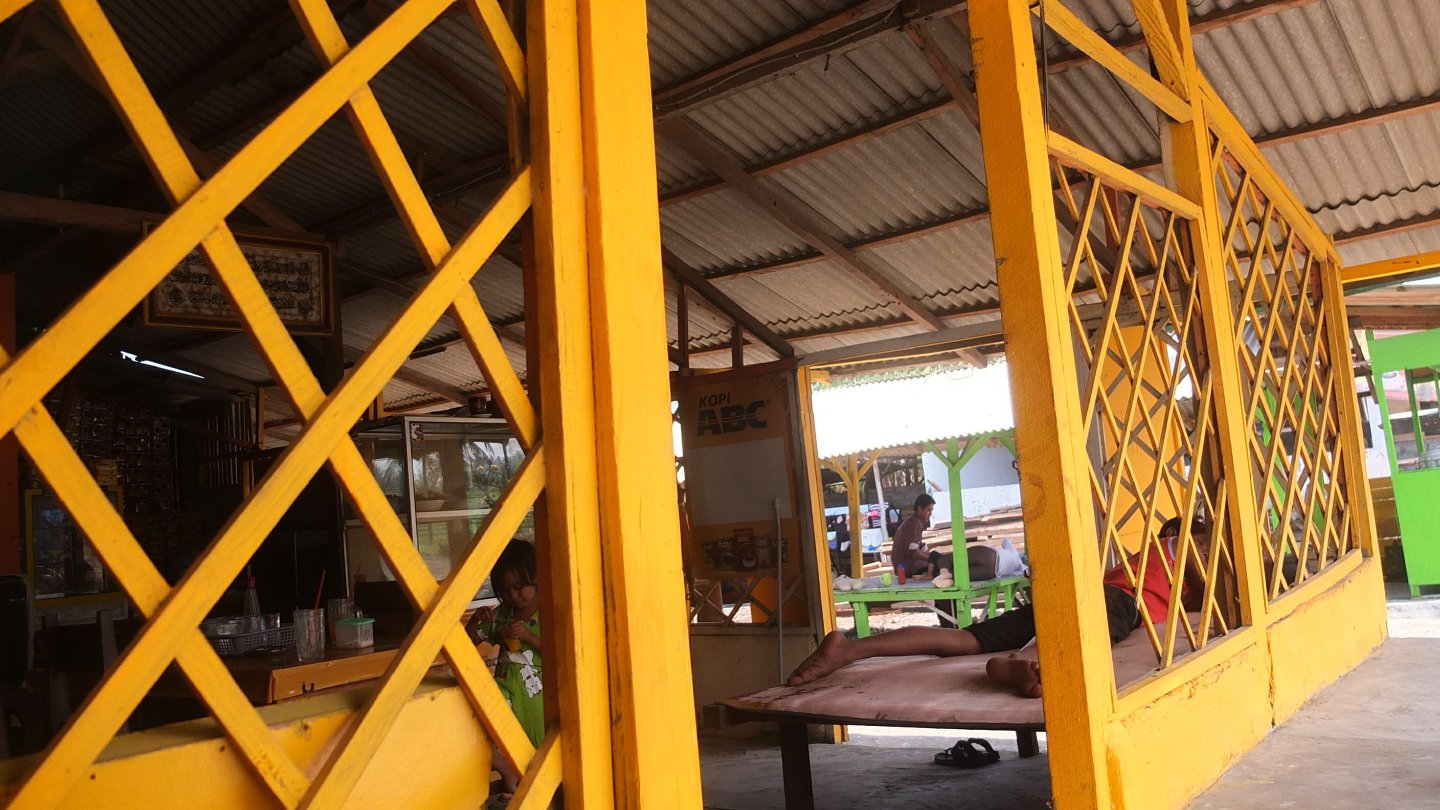 This is the warung. There is a bed provided :-) I was eating inside when suddenly I felt my neck getting more and more itchy until I realised the chair onto which I sat was covered with ants who start attacking me. They were all over my back, my neck, they bite me! Bloody ants! 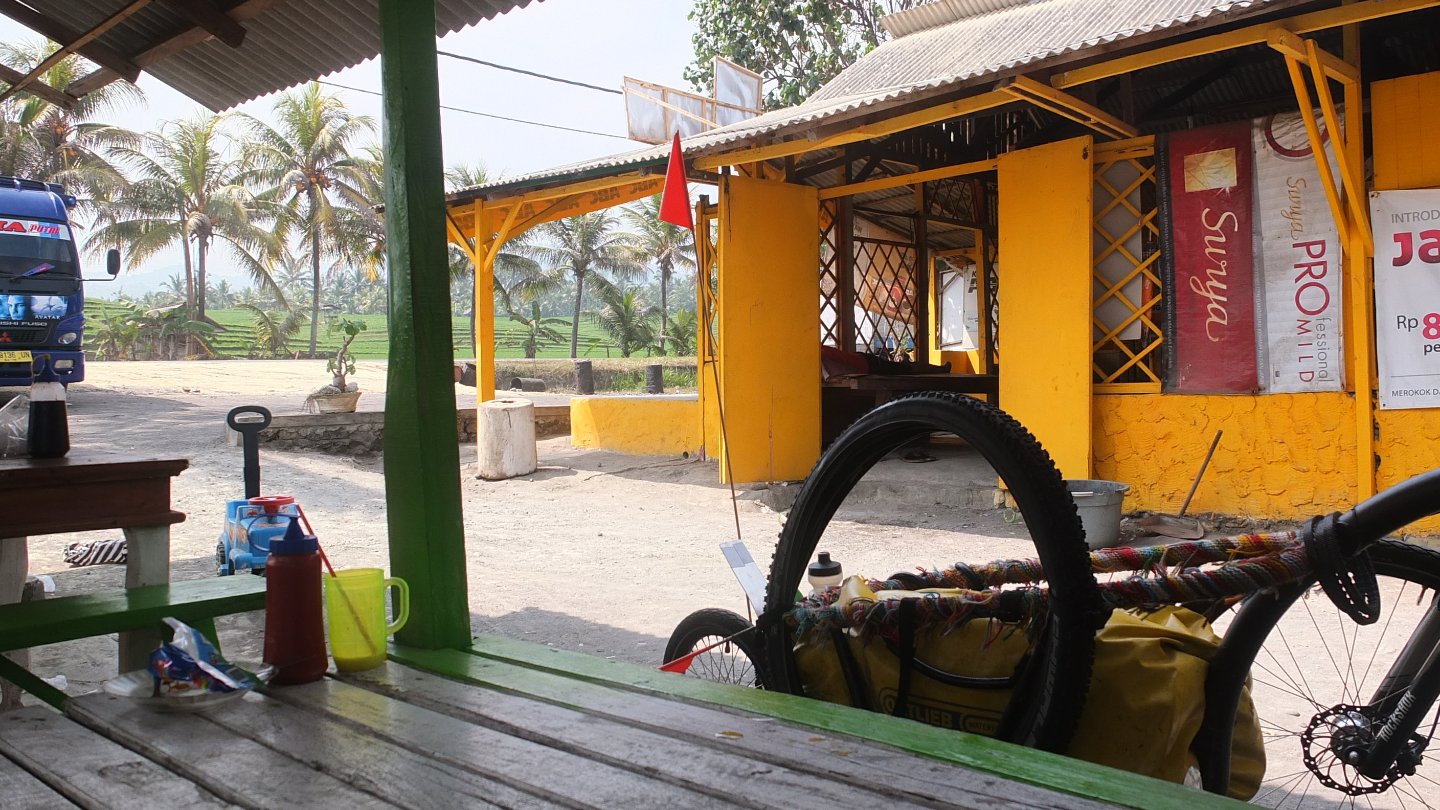 Finally I moved my bike and myselft around the corner and had a nap here waiting for the temperature to cool down. 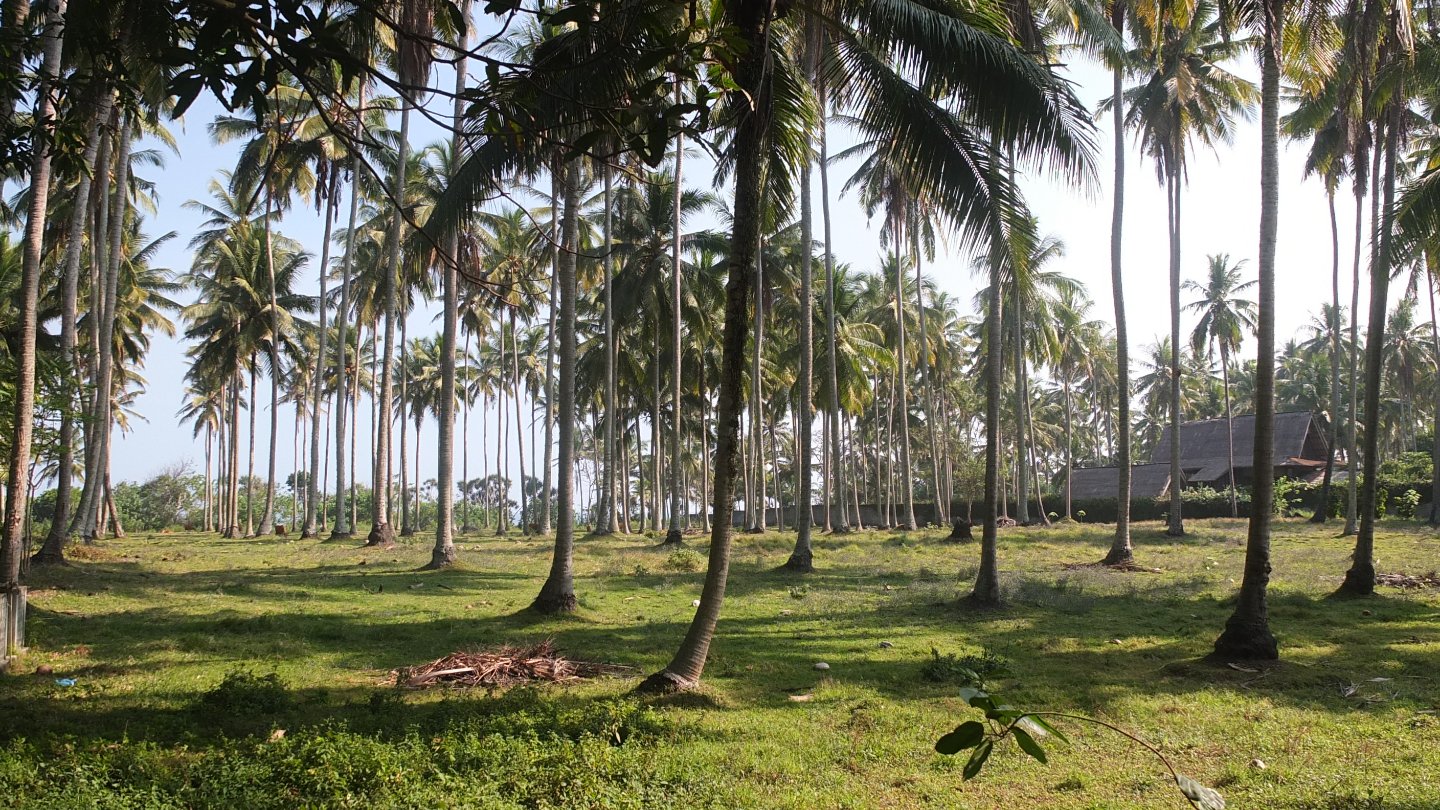 Later on, around 3pm I continued cycling towards west. This area is a coconut palm farm I guess. It would be perfect for my hammock :-) 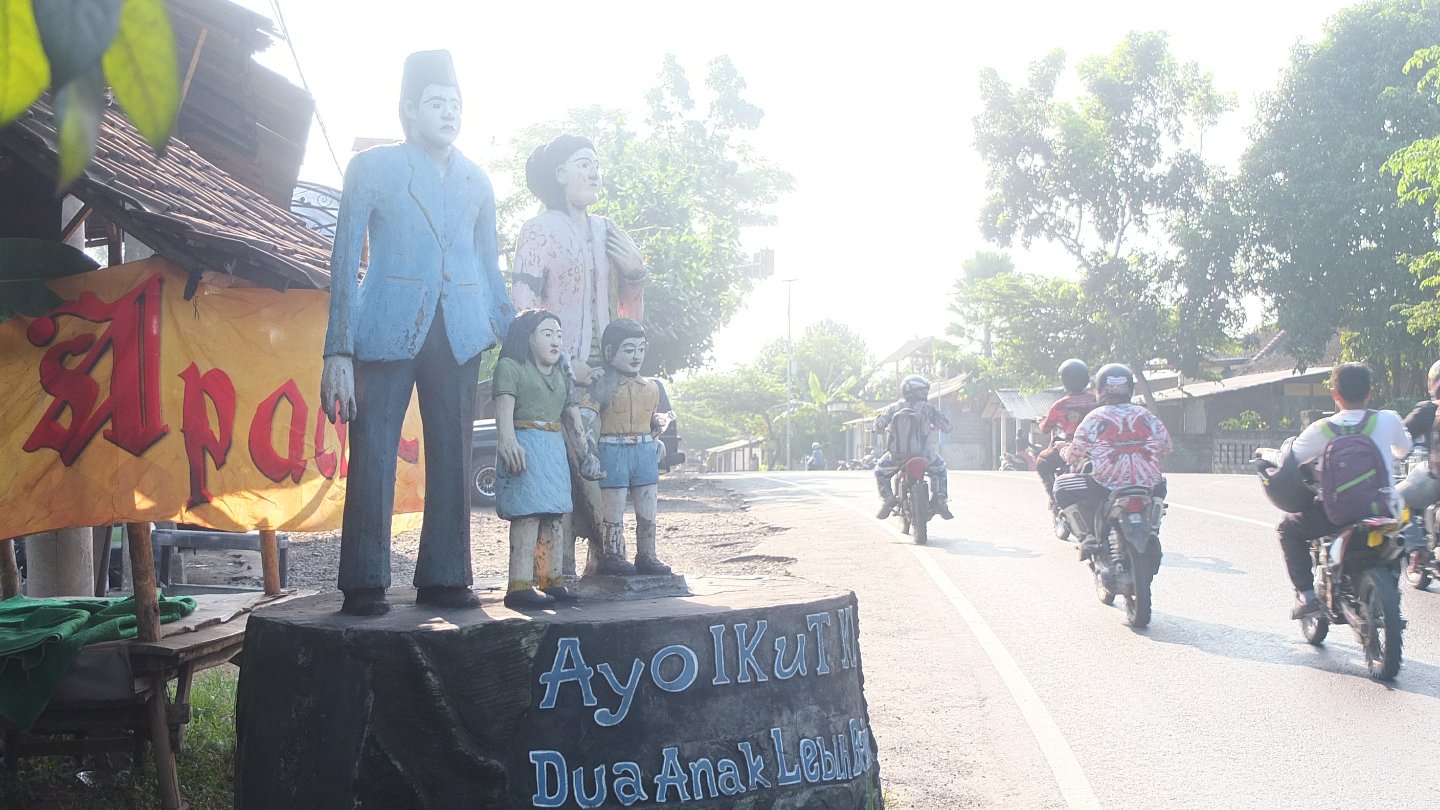 This is a town entrance I presume. Those sculptures are a bit scary though. 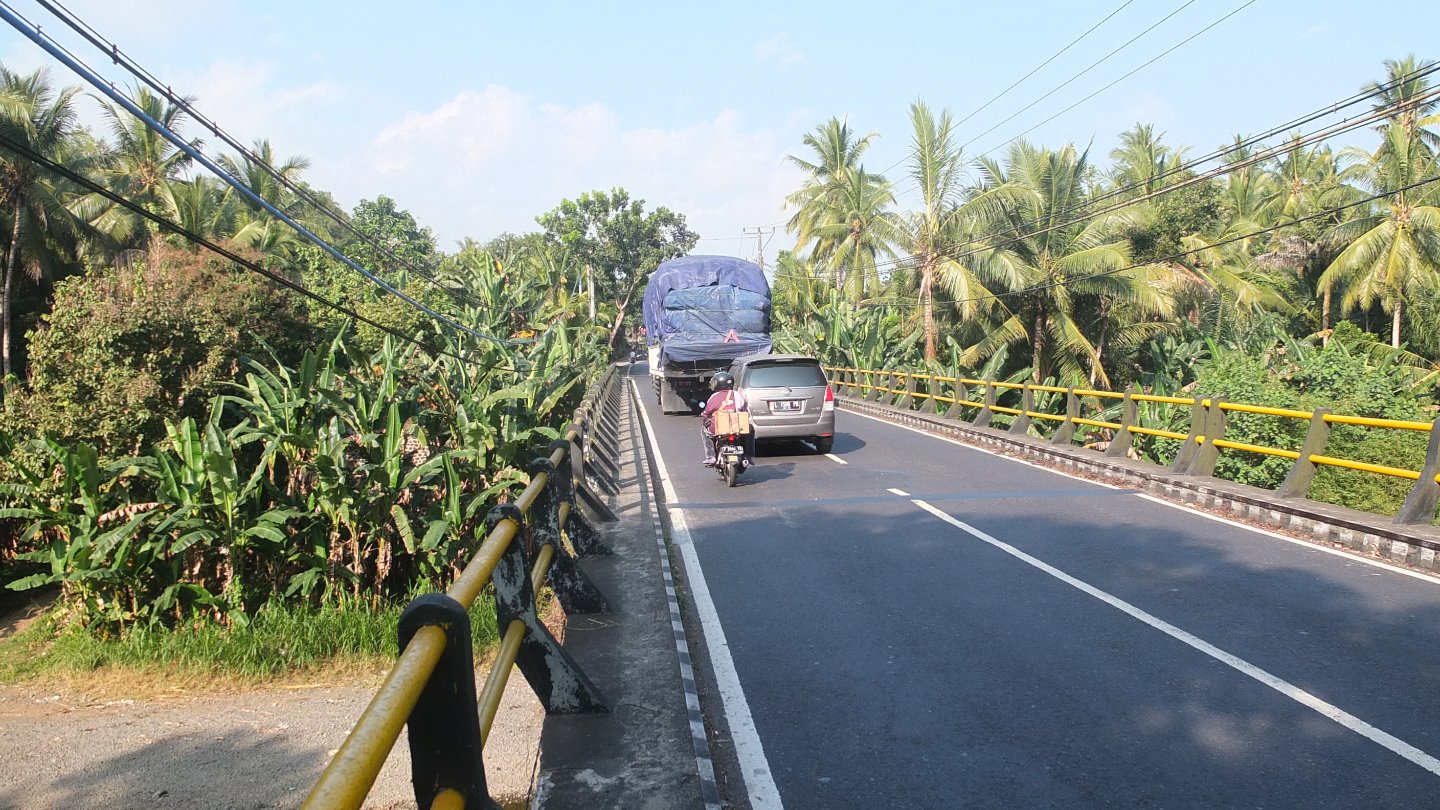 Continuing my way over a bridge I discovered…

…some guys who are cleaning their trucks right in the river! OK, why not… Do you know about pollution? 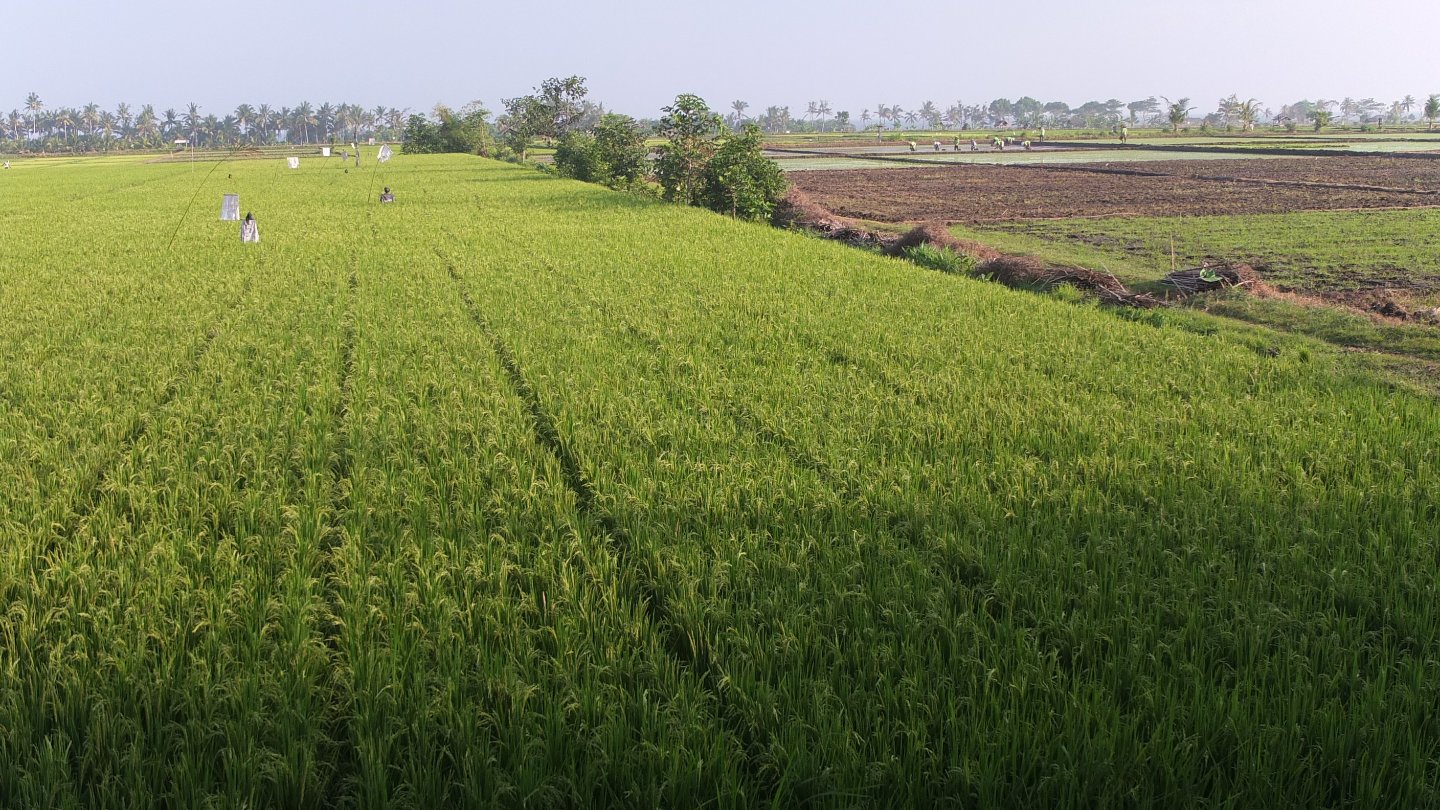 I’ve left the main road because I want to reach the coast for the night. It would be great to sleep on the beach between two palm trees :-) 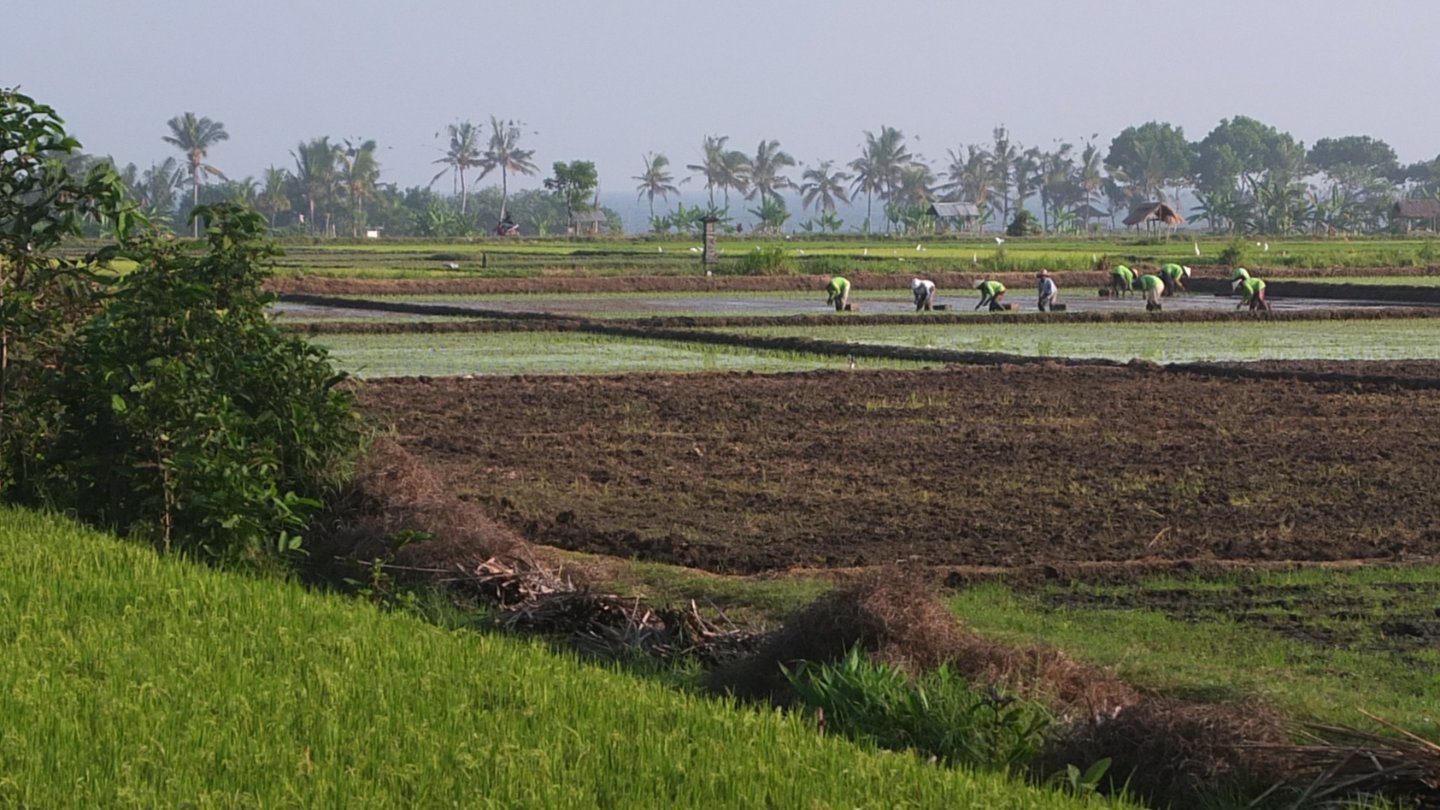 Indonesian workers over there. 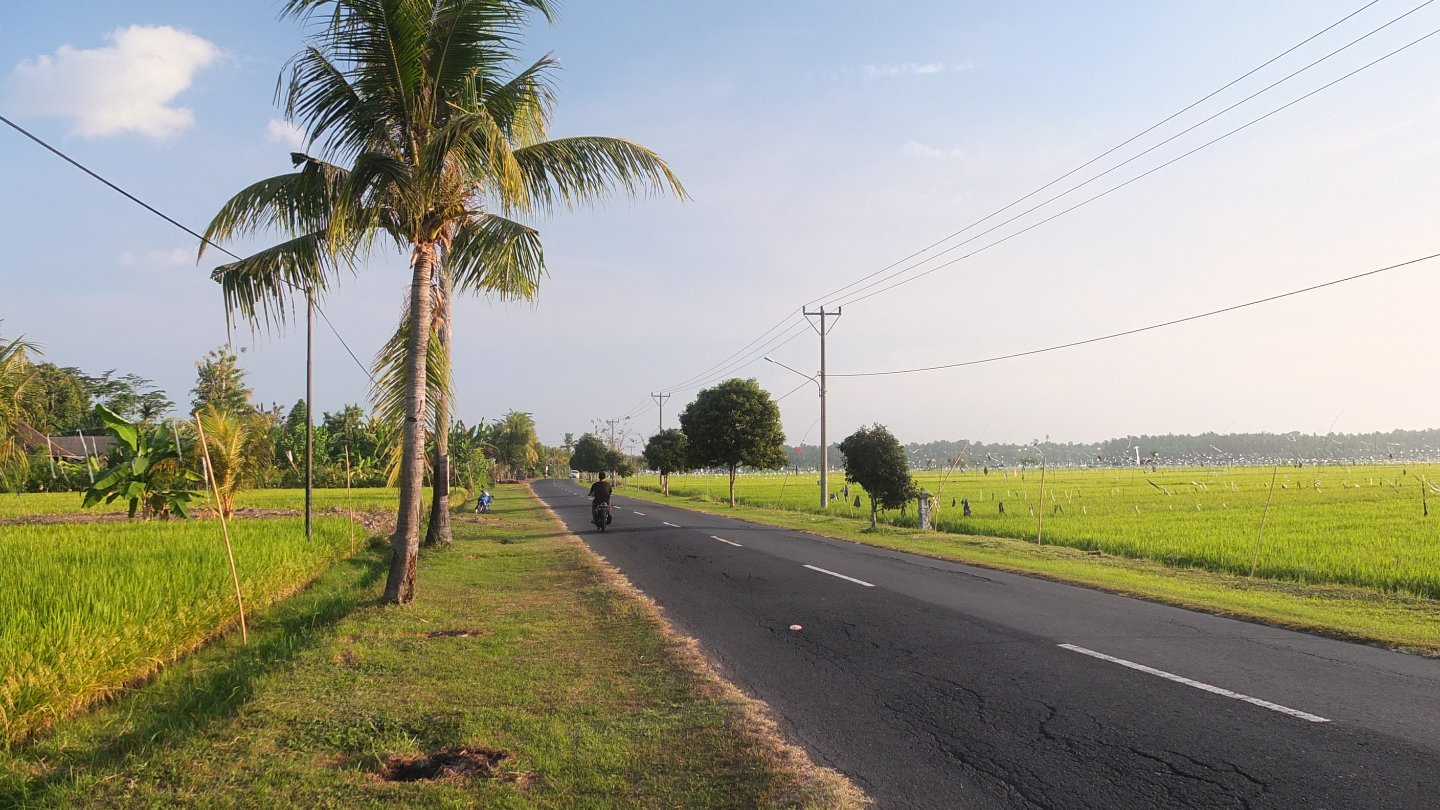 The road is much better now. 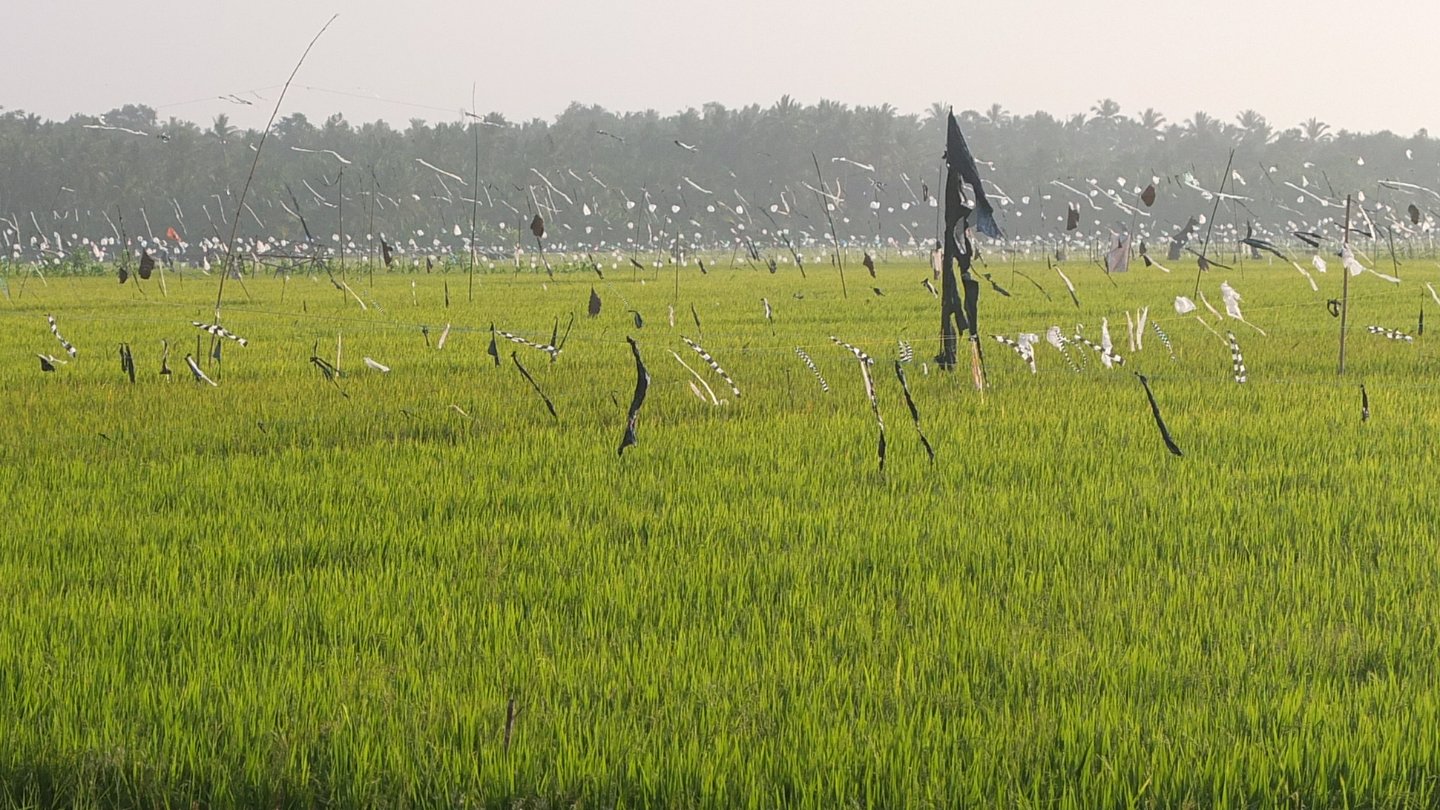 This is a bird protection and I bet it’s working well :-) I’ve seen a guy walking along the road and shaking each of those rope I guess, to  frighten the birds. 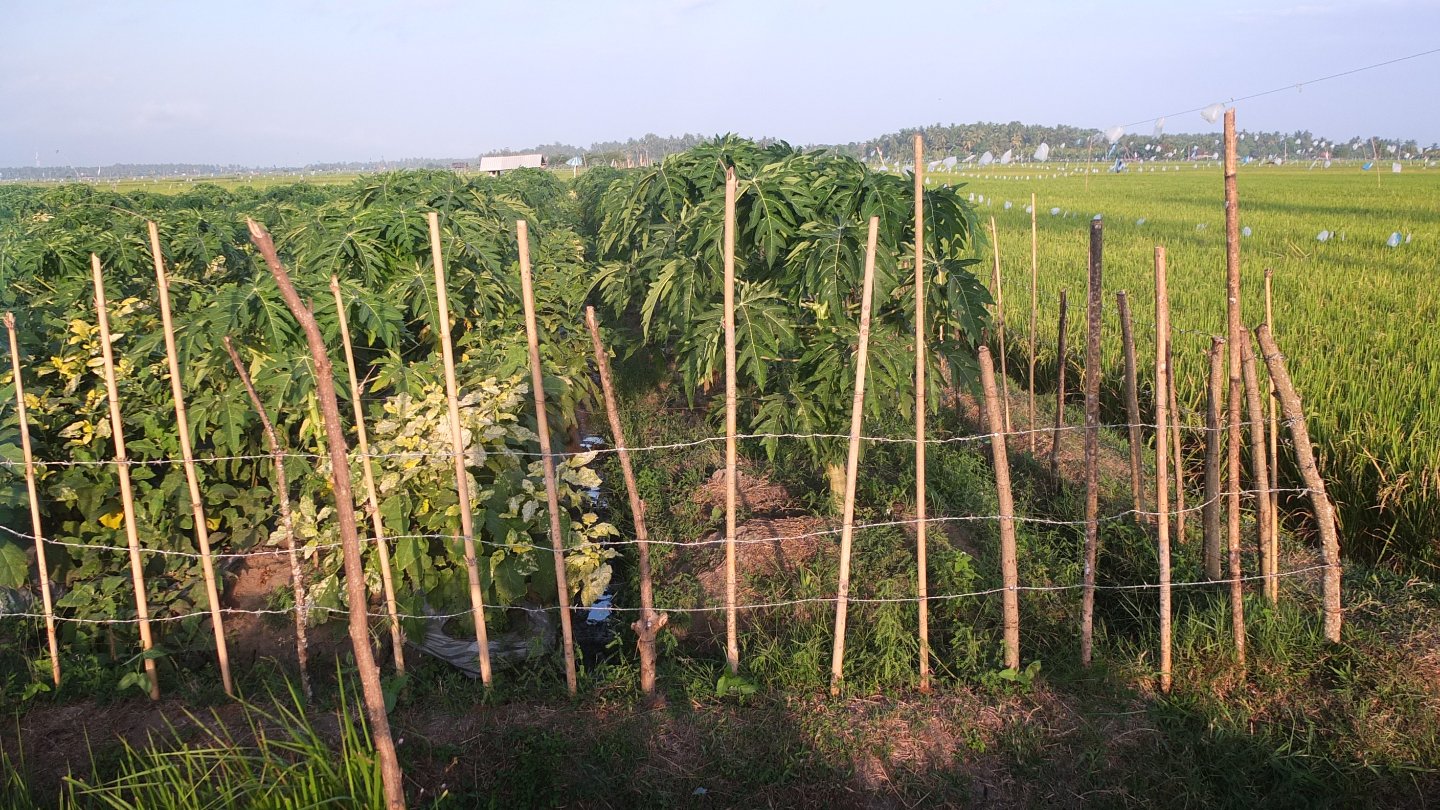 This is some young Popo trees. A real farm. 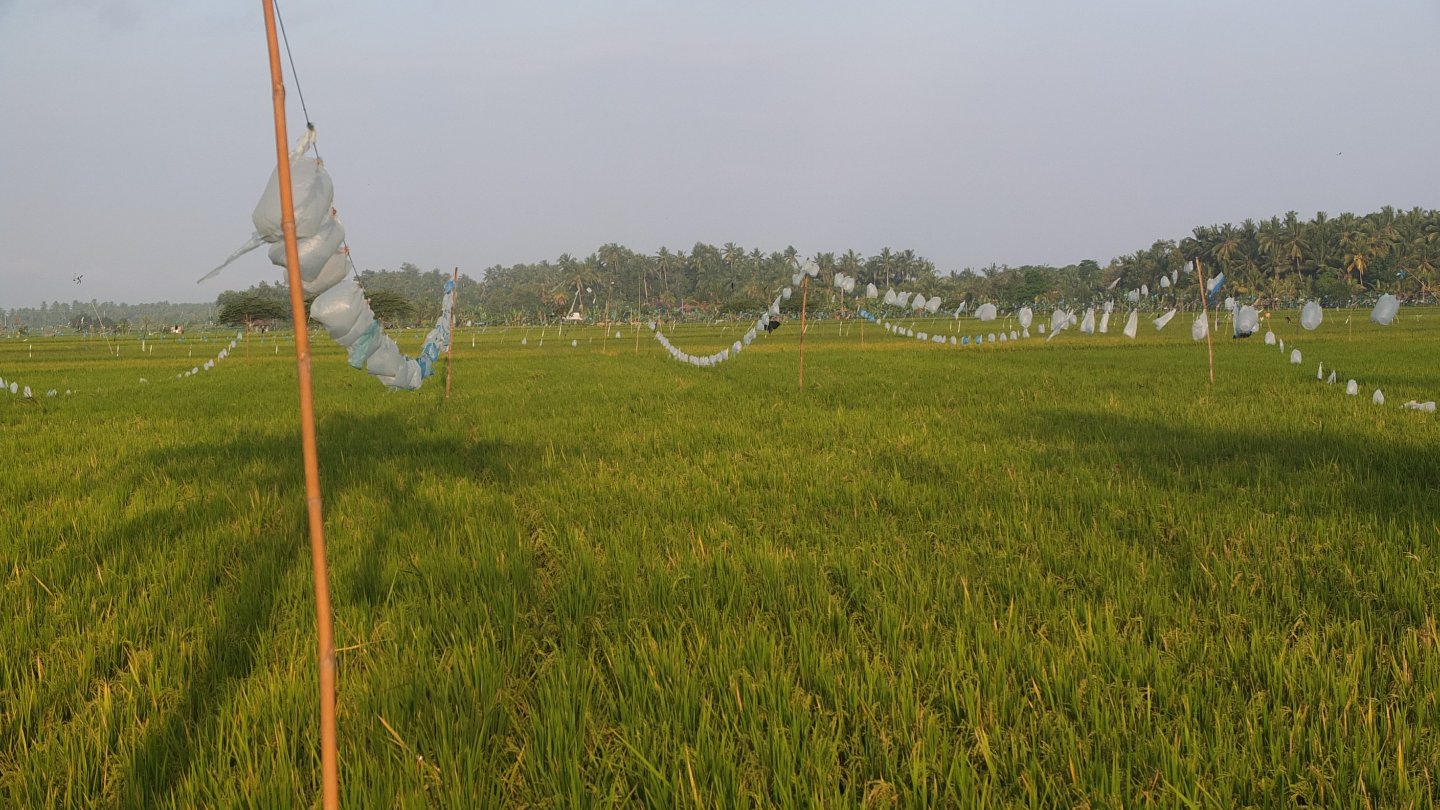 Some more “bird-proof” system: a rope with plastic bags attached to it, done! 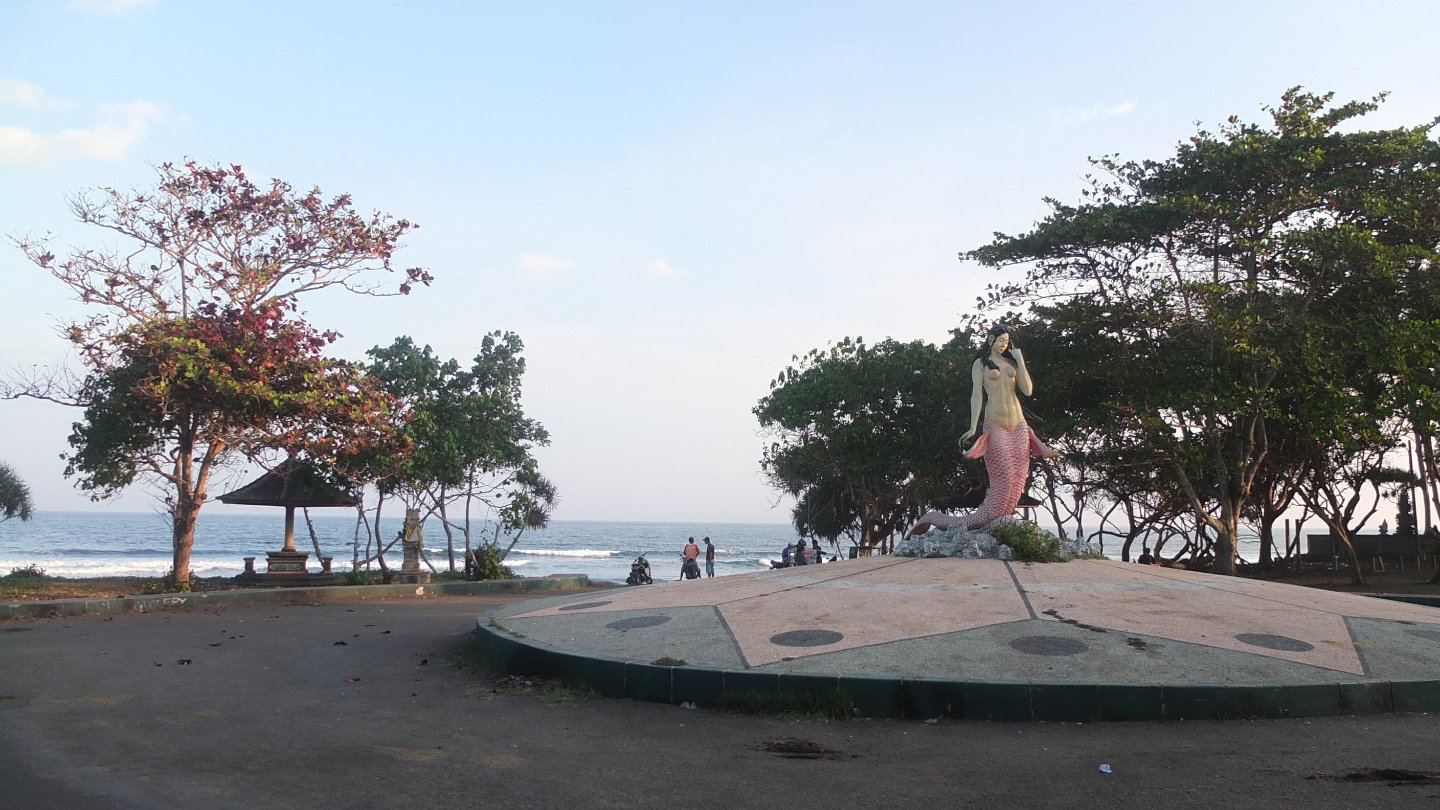 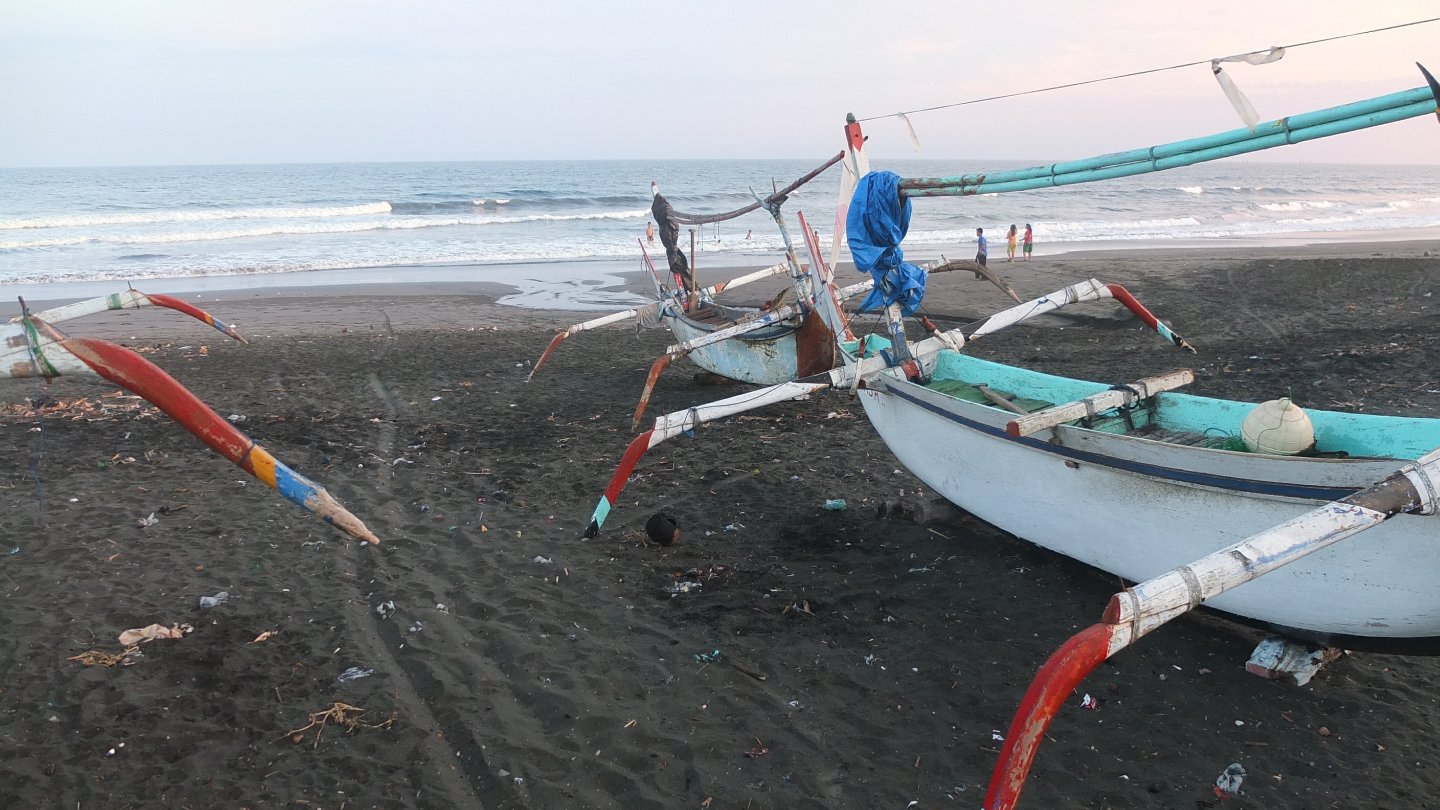 There is the same boats as we have seen before. 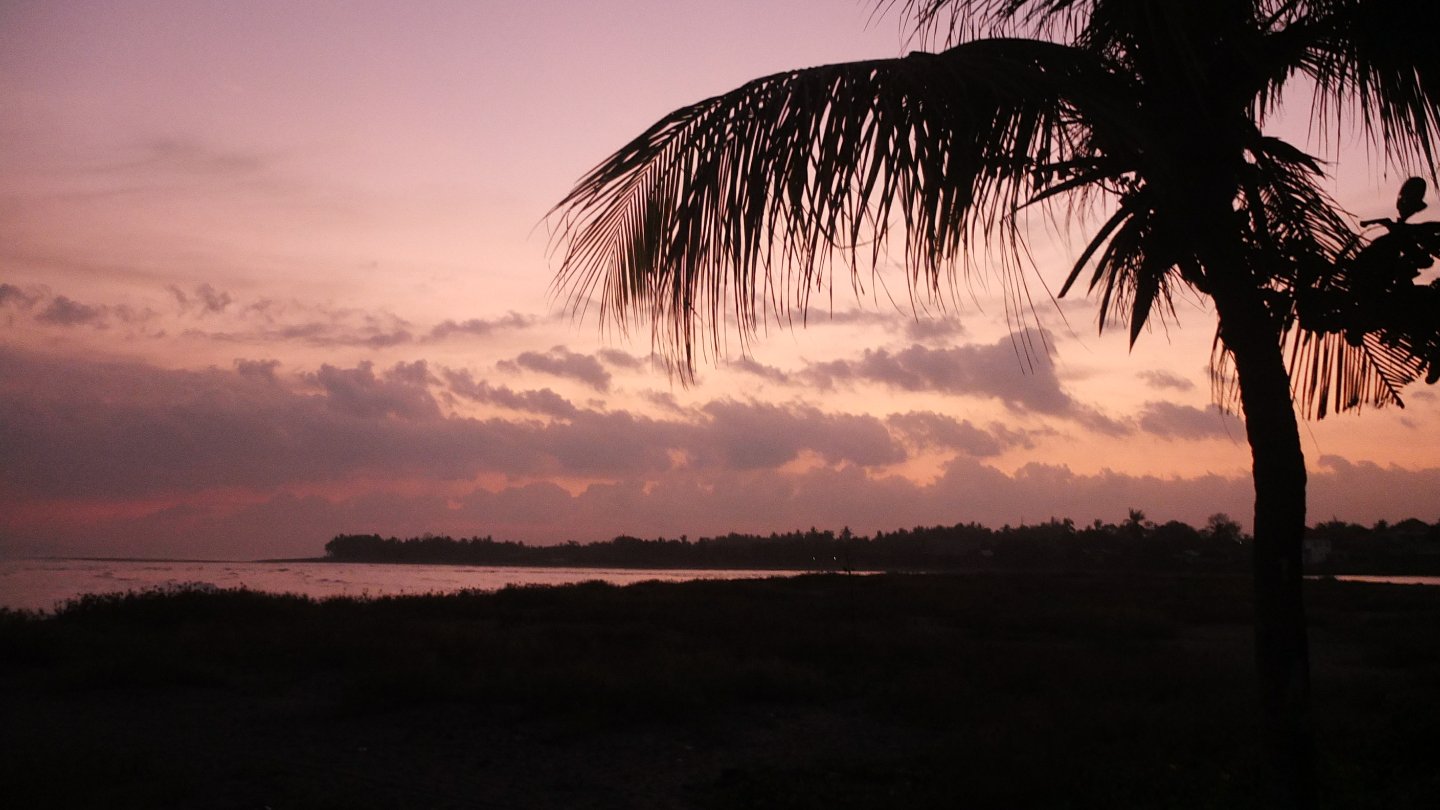 I was cycling on a tiny road, slowly when two guys on a scooter sloweddown nextto me and asked me some questions. Putu the guy who was not driving proposed me very quickly to eat with him at his house. Wow! Firstly we headed towards the end if this tiny peninsula (see map later) then we came back to his place. 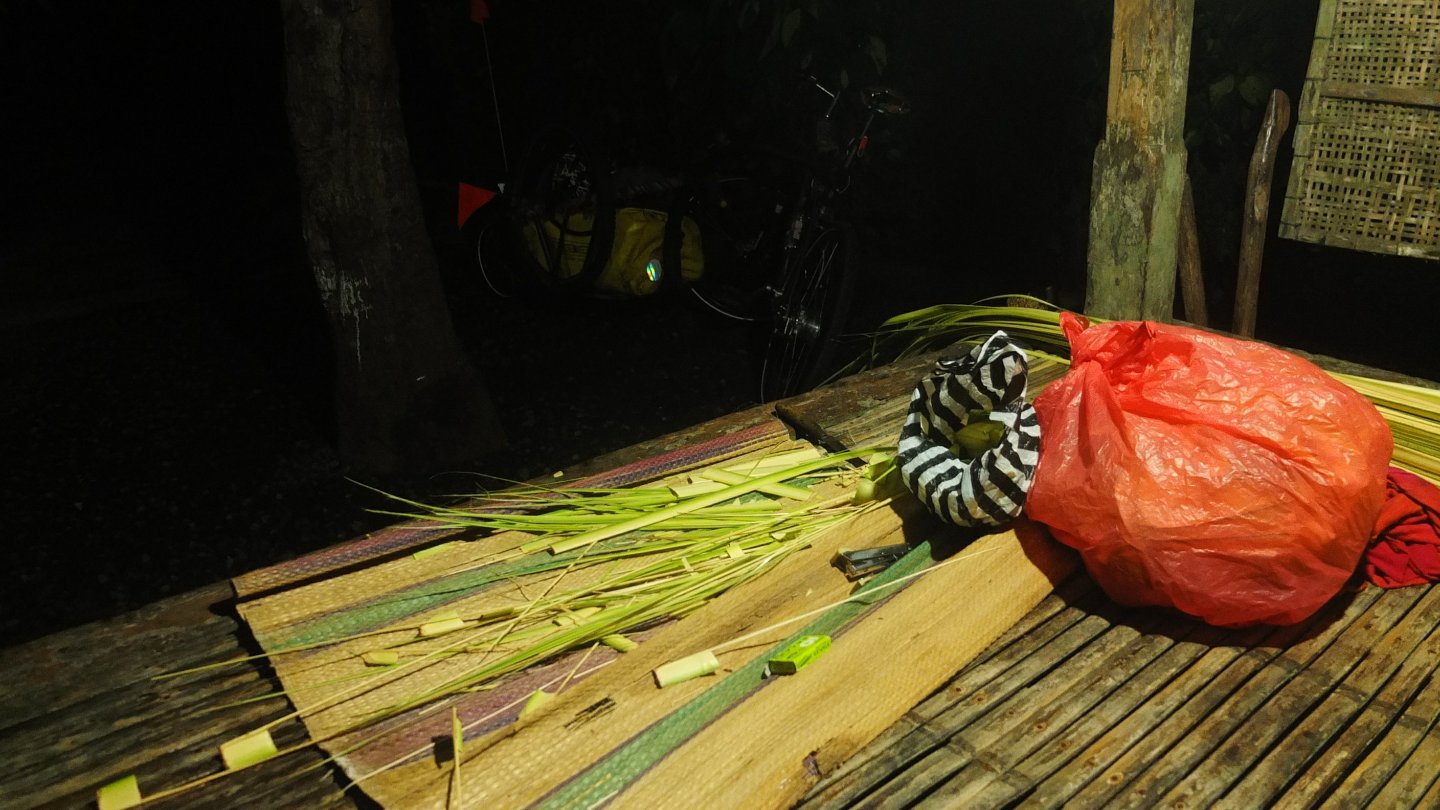 His name is Putu and his friend’s name is Made. In Bali, families use only four different names for their children. Source from Wikipedia: “The firstborn is “Wayan” or “Gede” or “Putu”, second is “Made” or “Kadek”, third is “Nyoman” or “Komang” (Man or Mang for short), and fourth is “Ketut” (often elided to Tut)“. These names are used for women and men.

When we arrived around his place, Putu offered me a noodles soup and a orange juice, then introduced me to his family. His uncle speaks a bit English so we could have a chat. I’ve tried to explain to Putu that I wanted to sleep in the bush tonight as I’m gonna do it every night. Of course for him I’m rich and he does not understand exactly why I’m doing this. They asked me how much is my bike, the flight to go from France to NZ or my budget for the next two years, etc… It’s tricky to speak money like this. For them, travelling is already something luxurious. My way to travel is the cheapest waya dnI don’t really know how to explain this. But then, Putu proposed me to sleep in his house, well onto his “bale”. It’s a kind of small platform made with bamboo where people stay to rest out of the sun during the hot day temperature. Tonight I will sleep on it with Putu. 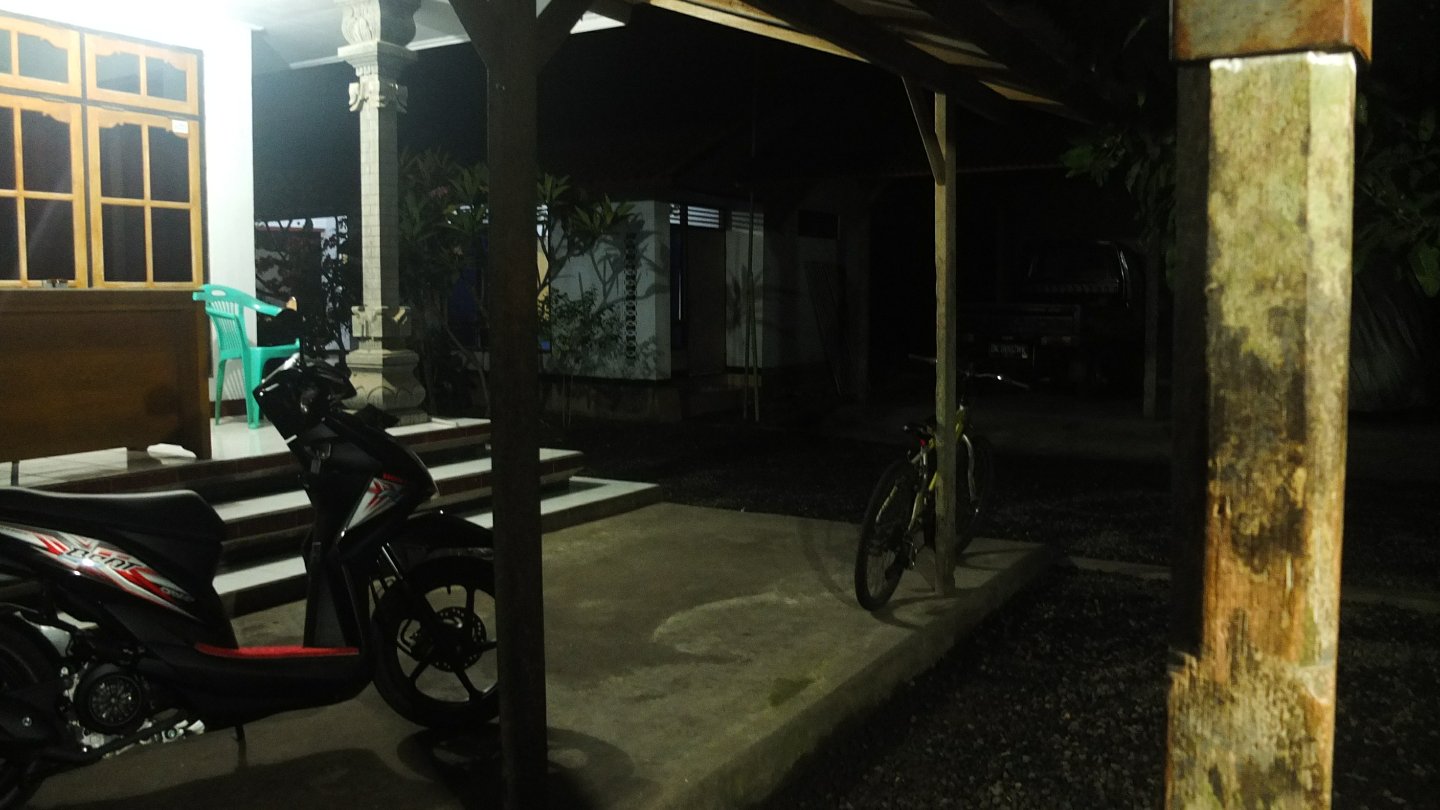 Putu is living her with all his family. Everyone has an independant room and they share the shower, toilets. His grand’ma is living not far from her. The family owns a small rice factory and she is living there by herself.

Before we slept, Putu proposed to have a look around. We took his motorbike, drove less than a minute and stopped around the corner haha :-) One of his friends and neighbour has a local shop (like him) and we had a chat together. Every one is also following an Indian show on TV. I don’t get anything of what they are saying in the show. Putu and his friends neither but they can read the subtitles. Putu speaks a little English so we can communicate so he does some translation for me :-) His friend offered us to drink some Ara Bali (Balinese cocktail made from coconut fermentation. Around 25 degrees alcohol). It’s good but I won’t drink a bottle. How to they make it? They set up a “system” (as said Putu) an a young coconut in the tree. 2 or 3 weeks later they pickup the coconut and it’s ready to drink. Interesting :-)

Soon all Balinese people are going to participate to a big festival called Galungan. It’s one of the major and biggest festival in Bali. To create a “Penjor” they take a long bamboo pole, decorated it and put it front of their house. A Putu’s friend who has a “scooter washing” business is going to make a few. Tomorrow morning he will show me how to make one. Well, I might stay to see that! :-)

What a day, how could I imagine something like this? I could not :-)