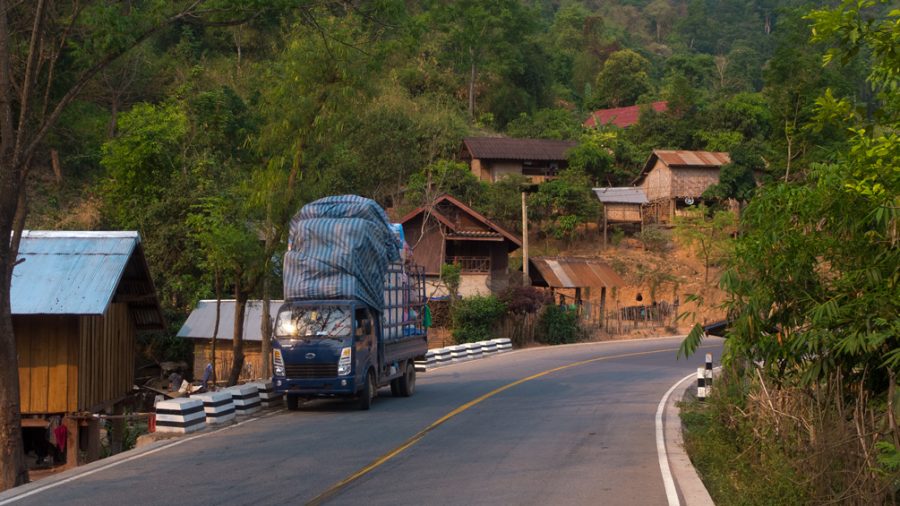 Today I’ve crossed two passes and done more kilometres than I needed to. In fact, I’ve forgot my camera in the restaurant where I had lunch… I’ve realised this once I was on the second hill, just few hundreds metres after I took that picture, rah! That’s annoying! I did not have choice than to come back and get it or I would lose it. That cost me 24km which is not the end of the world fortunately but still! 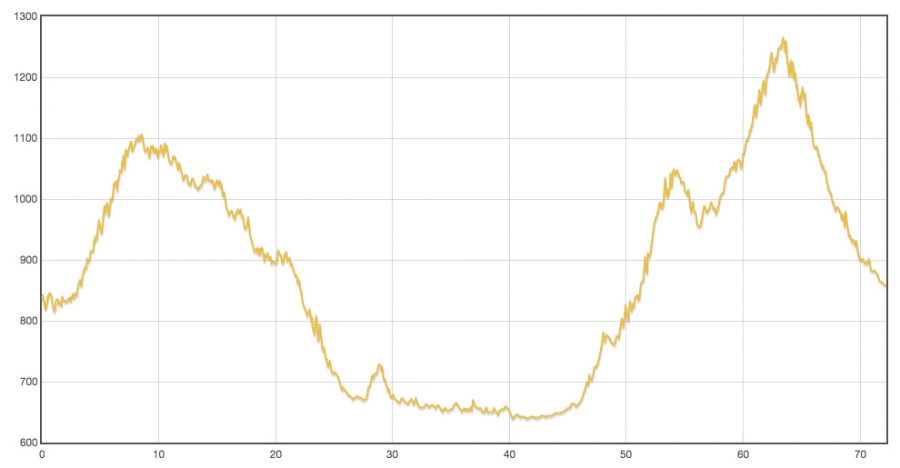 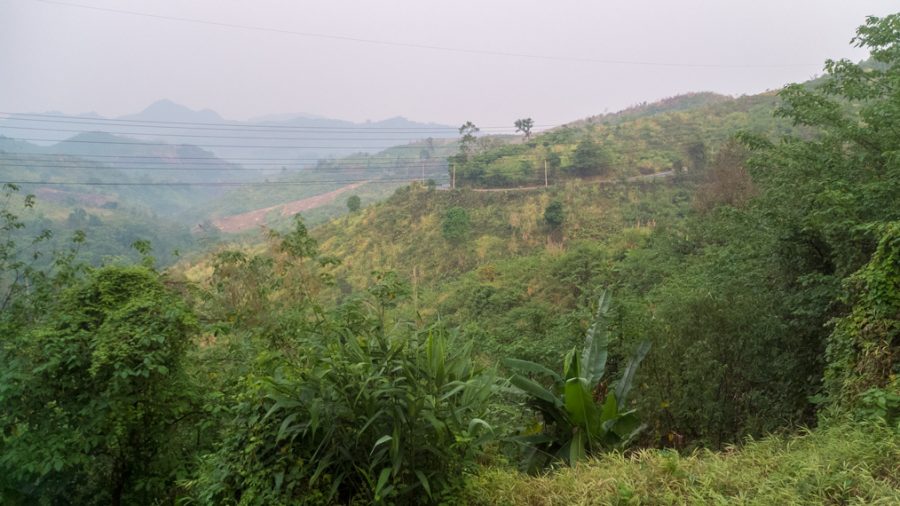 This morning the road is climbing steadily and not too steeply. There is not much traffic, all good. 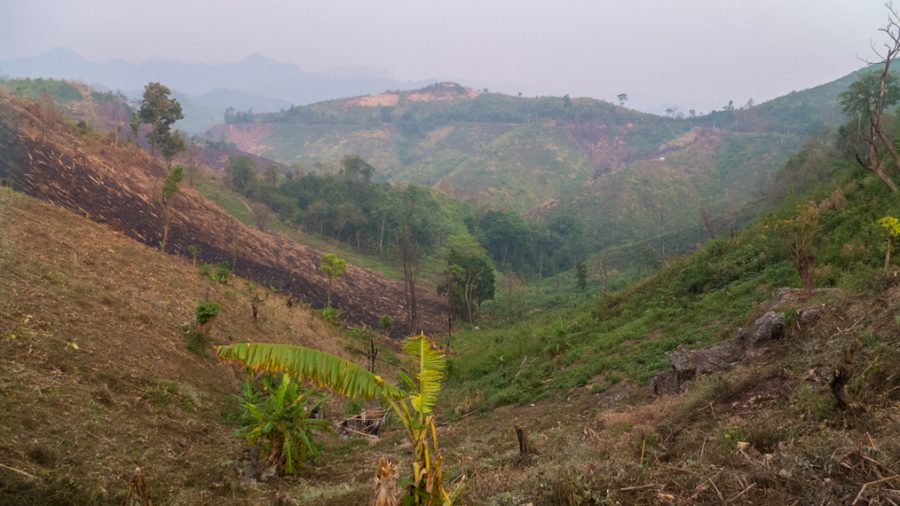 Each time I stop somewhere, I make sure I can see my progress :-) 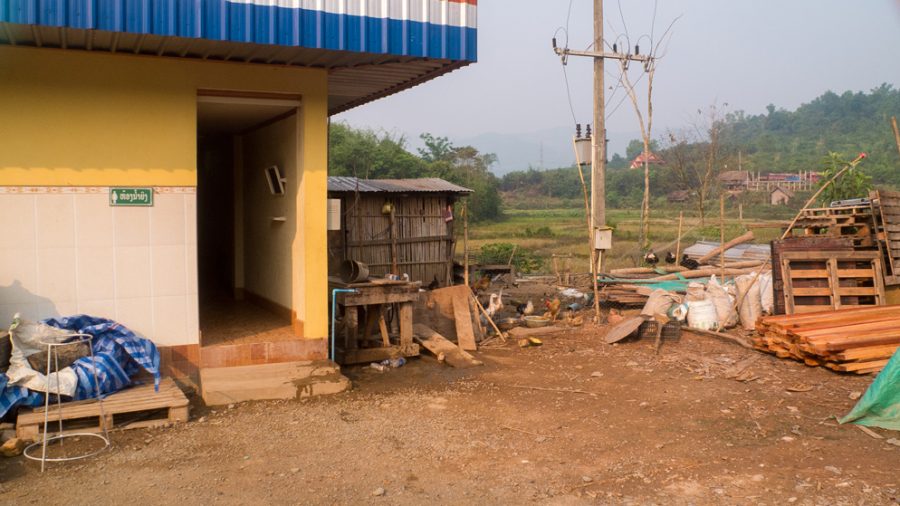 Down the first hill, I stopped at a petrol station to filter some more water. In Laos, at least in the northern part, most of the petrol station are owned by families. The shop where you pay is their house too. The toilets are not public but reserved for customers. In Laos, I still have the same ritual but this time I must ask the owner if I can use their toilets, that’s all. 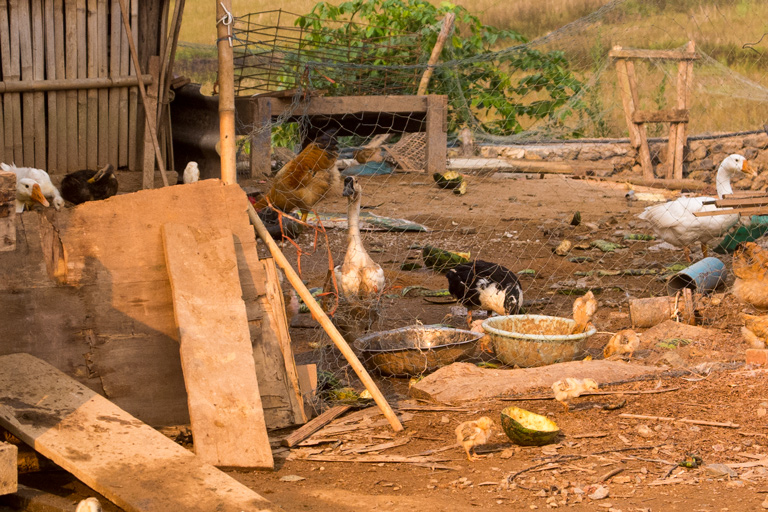 That’s why, on the side of this toilet construction, there is ducks, chicken and more walking around. 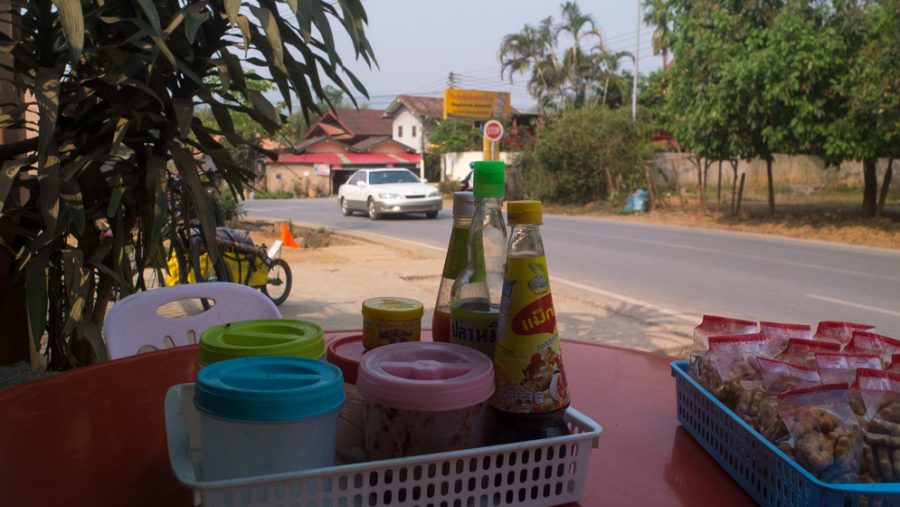 Later on, I’ve stopped around 11:00am in a local restaurant to have something to eat. 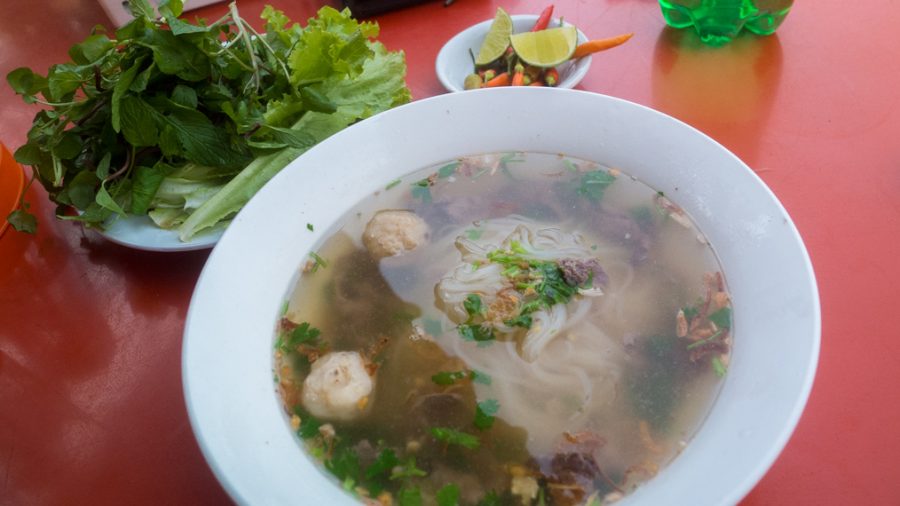 Since I got in Laos, the main food I eat everyday is noodle soup like this one. There is nothing else! Every single restaurant propose the same meal. That’s why I pay for a meal only once a day and for the rest I will cook. 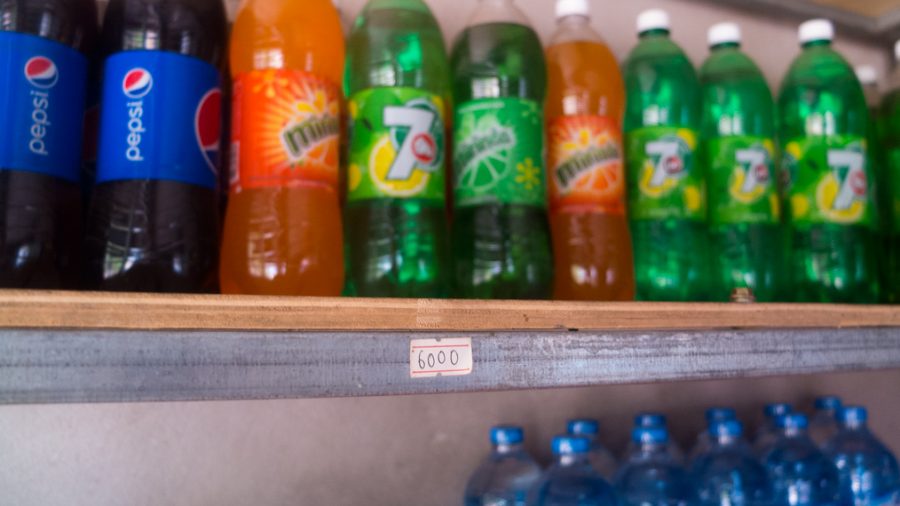 Since few days, I was looking for a new bottle to store more water. That restaurant is cheap, well I thought. When I got ready to go (and ready to leave my camera on the table) the woman asked for an unexpected price. In fact, the price for a bottle of soda was 10.000 and not 6.000 as it’s shown here. Grrrr! I feel people cheat on me… Earlier this morning, I stopped in a local shop and asked the price for a bottle. The guy said 80.000. Did I hear correctly? 80.000!!! I refused to pay that crazy price of course. Thinking about it now, that guy was thinking of 18.000 but he didn’t pronounced it correctly. So finally, 10.000 here is correct but still, why the price is wrong on that sticker? Anyway, let’s go.

I’ve left the restaurant (leaving my camera onto the table). I came across the town and knew I wanted to buy some glue but I didn’t. Further along the way, I thought many times of taking pictures here and there but also I didn’t. I thought “Well, it’s not worth it. Next time”. I’ve seen a huge house, like, super huge but did not dare to take a picture of it. It was actually pretty hot and I was focusing on finding THE spot where to have a rest.
Something like one hour later. I was climbing the second big hill of the day and didn’t find yet what I was looking for. I came across a tiny village inside the curve of the mountain and find it very cute. Let’s take a picture then :-). I opened the camera bag and surprise… nothing! Oh s***! It took me seconds to rewind the tape and see my camera having a fresh cocktail on that table in the restaurant. Someday, I feel like my brain is empty… What should I do? Leave it there and keep going like this? I’ve got my phone anyway and that’s one less electronic thing to charge. Roh no, I can’t do that. I cannot be that lazy. Let’s come back then… 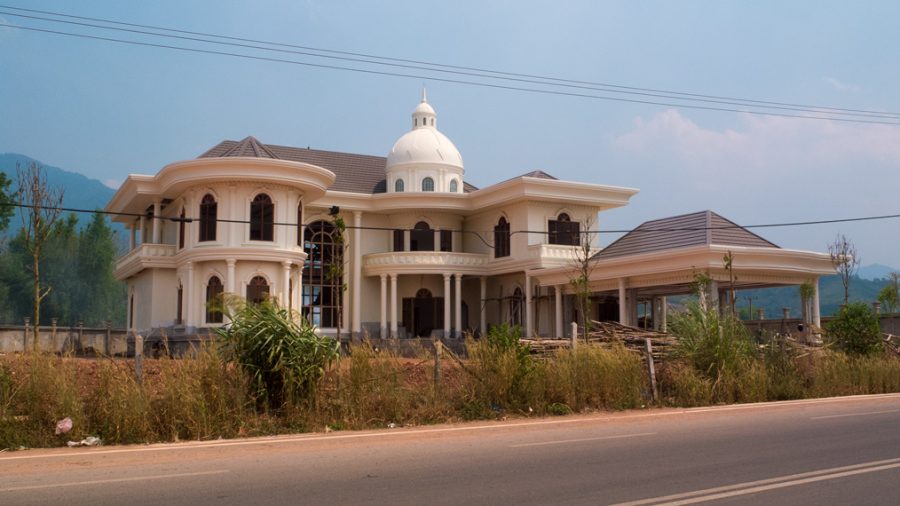 I believe it was a sign. When I was back in town, I did buy the glue I needed. I’ve missed few pictures on the way previously and the fact that I had to come back made me took those, well this picture. Remember the huge house I’ve talked about previously. That’s the one. Disney style! That’s very ugly actually. Now, let’s do the same road again but this time, I will take a rest before the climb.

After resting 3 hours on the dusty concrete floor of an on going construction’s building, I brought together all my courage and patience and start the climb for the second time. I think, as every touring cyclist, I don’t like coming back the same way and even worse, I hate doing twice the same climb! Arf! So that’s the cute village I was talking about earlier on this page. It’s nothing super fancy and I should have taken more than one picture but the atmosphere was good. I’m still in admiration of the way Loas people stack stuff in their trucks :-) 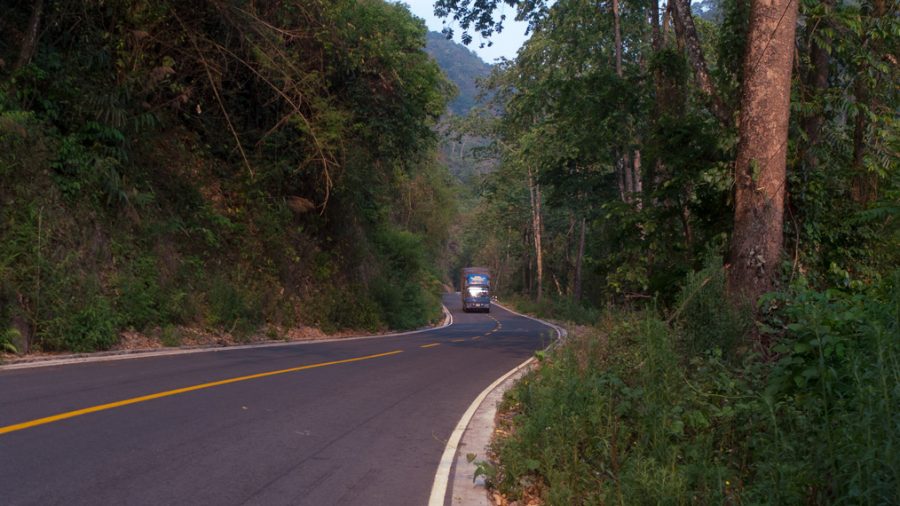 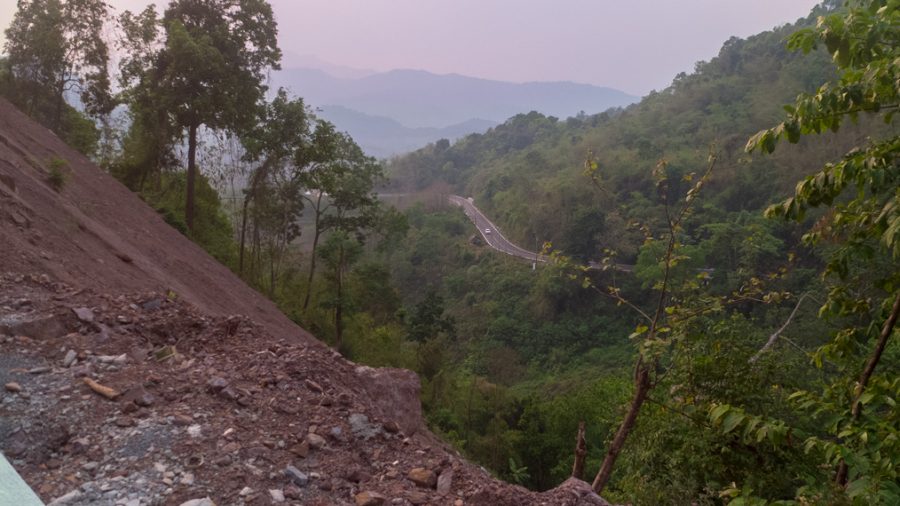 Few, it’s hot! You should put the heater on before you read these lines. Once you sweat you would get the same feelings as me :-) You would feel cycling on the same road! Haha. 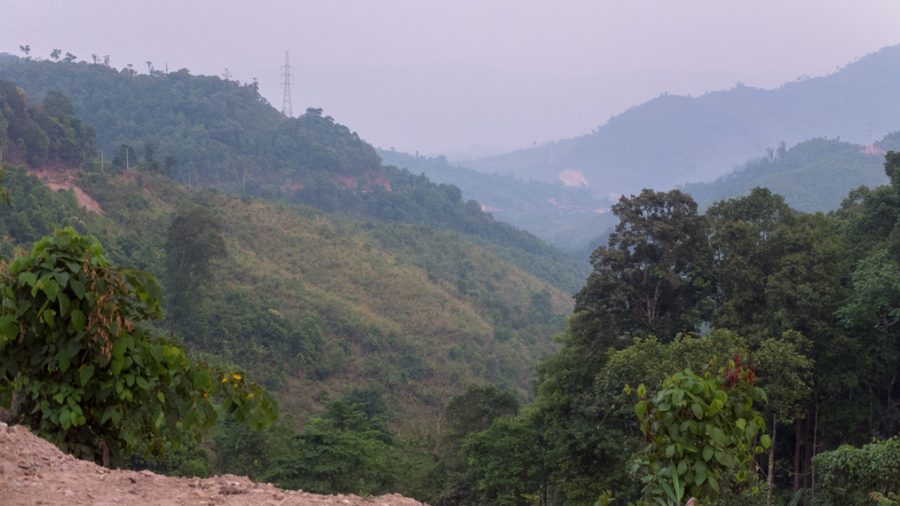 Finally I arrived on the summit! Few minutes ago, I’ve met another American touring cyclist who lives in Korea. He was coming from Vietnam and is on his way to China. I told him I’ve met another American cyclist yesterday who is going to China too. They have a gap day between each other but only him knows it now :-)
From now on, I should have downhill for the rest of this day. 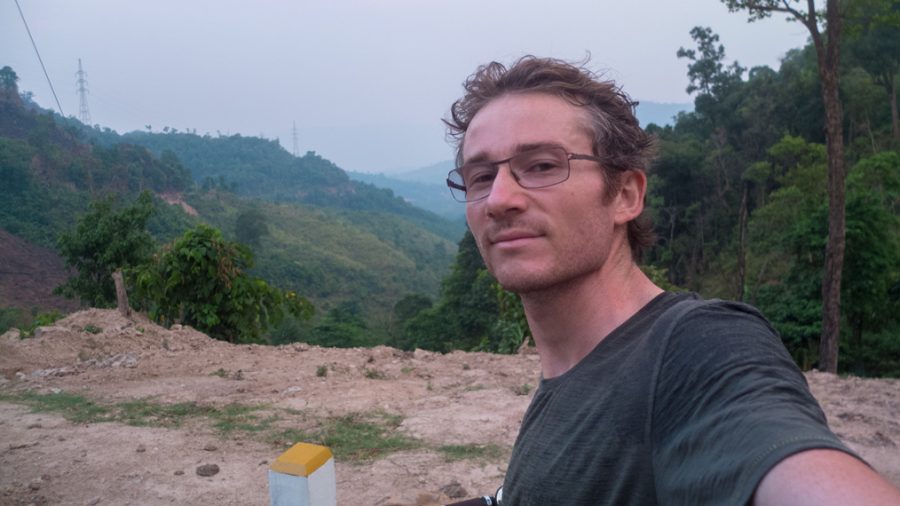 To finish that day, I offered myself a downhill. The next 15 minutes were great! At the bottom of the hill, I found a petrol station where I could have a shower (using the toilets as usual). Then, the goal was to find a spot nearby before I started sweating again. Sleeping not clean in a tent is sometimes acceptable but in a hammock it’s horrible. Contrary to a tent, there is more contact surface with the body and when you sweat it’s really not nice. Fortunately the road was going like flat or slightly downhill so I didn’t have to push so much. I arrived in a town, bought some more food and kept on cycling. That’s only after a short hill, still in that town, that I’ve found my spot for the night. It was a small land squeezed between two houses with a wall at the back. In few month, that will be certainly become a house but for now it’s still empty. Fortunately, there was not too much lights as well so I would be hardly visible.
There was no trees on the parcel but I’ve found the way to hang my bed anyway. The wall was something like 1.70m high and at some points, its skeleton (the metal bars) was sticking out. I chose the darkest corner and set up my camp for the night. During I was cooking my masterchef meal (dry cheap noodles) a guy came along. I said politely hello (it’s always better than to try hiding) and explained to the guy that I would leave very early the next morning. During the rest of the even before I slept I’ve seen few people staring at me in the darkness but nobody bothered me. I think they are more frightened than me. Good night!