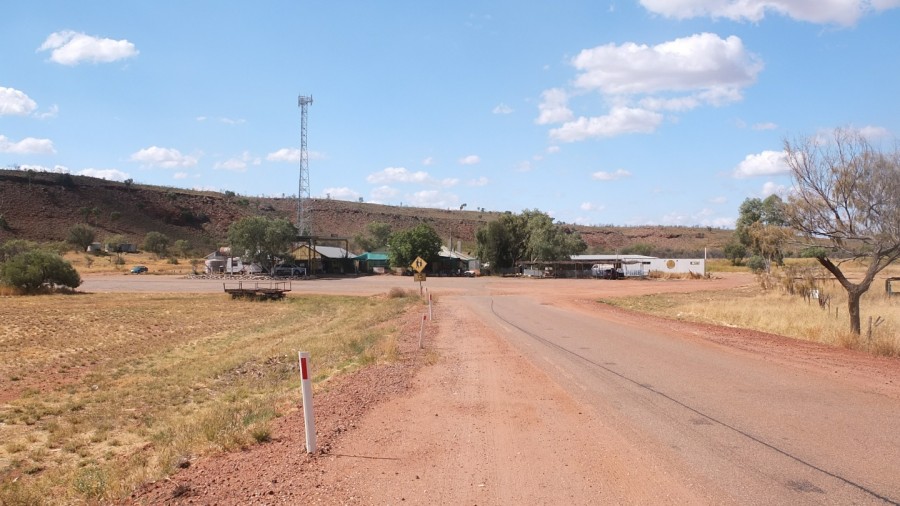 Today is another travel through not much. I’ve stopped for lunchtime in the only roadhouse along the way in Barrow Creek. The last few days, people told me about a famous bad story around this area. Years ago, a guy murdered a man and kidnapped his wife. Fortunately the woman escaped and this guy is now in prison. The police never found the man’s body. Good story, isn’t it? I’ve heard that story maybe three times during the last two days. Australians want (even enjoy maybe) to scare backpackers I guess. Anyway, Around 4:30pm, when the sun became smoother, I continued cycling for another 41km to reach the next rest area on Taylor creek.

Elevation part 02. My GPS run out of battery before the end of the trip so I had to stop and recharge it. This is why there is two parts. I could merge the GPS track but not the Elevation screenshots. 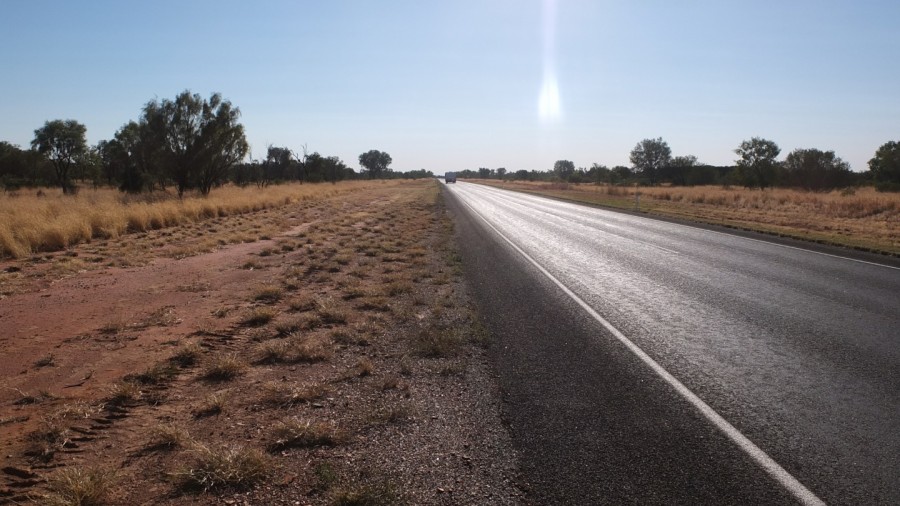 Let’s start the day from this morning, another beautiful hot day! 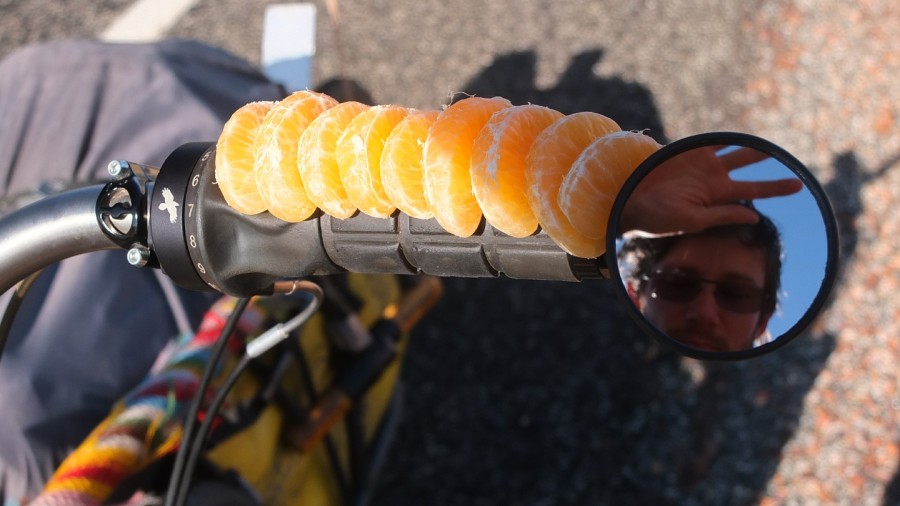 20km later, I’m having the first break of the day and a nice fresh mandarine offered by the woman yesterday :-) 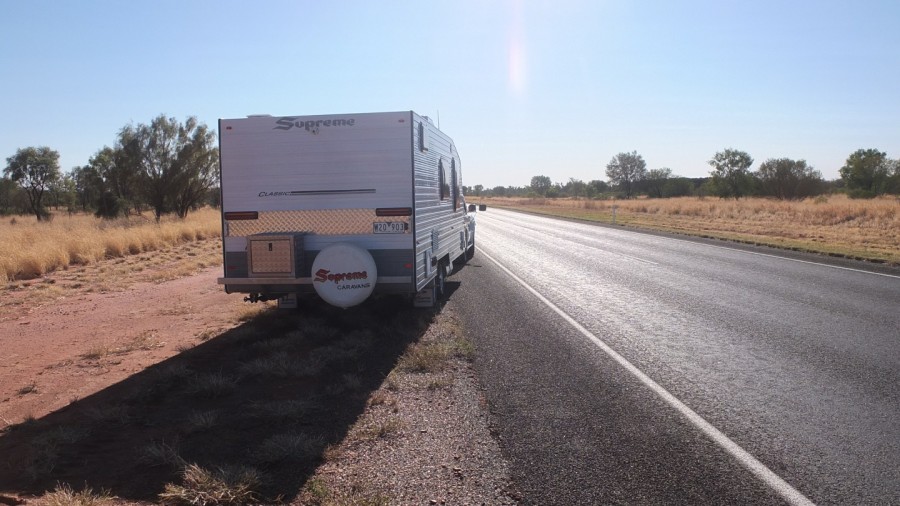 Yesterday, I met that guy who travelled in so many places in Europe. He proposed me to have a cup of tea this morning when we would see each other on the road. I think he did not realised that I’m cycling… I’m slow :-) It’s now 9:15am. I’ve started around 8am but they have certainly started around 9am. We concluded that it was a bit early and not the best spot for a cup of tea so he is now leaving. Maybe I’ll see them later today :-) 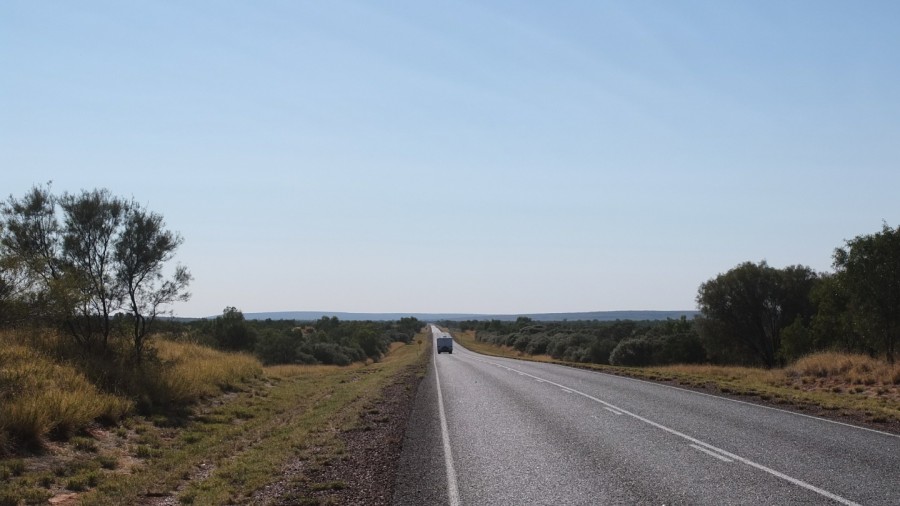 The road goes on, straight. 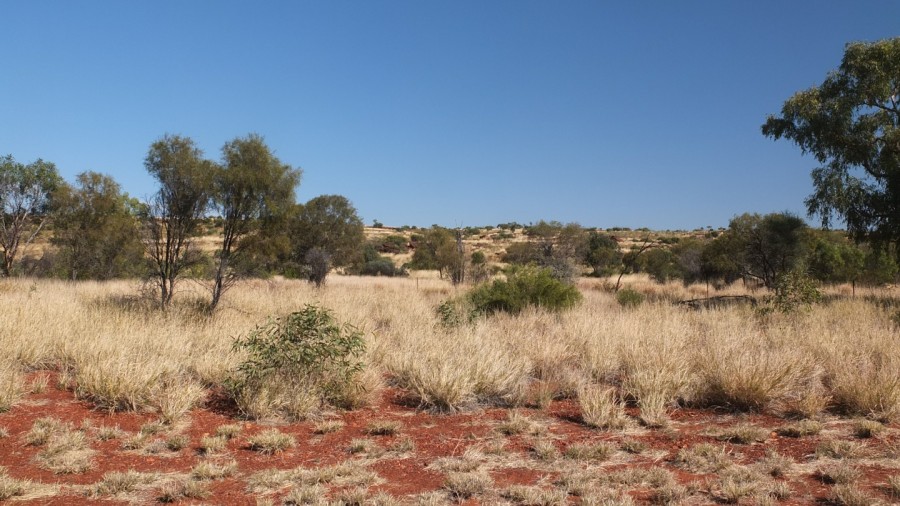 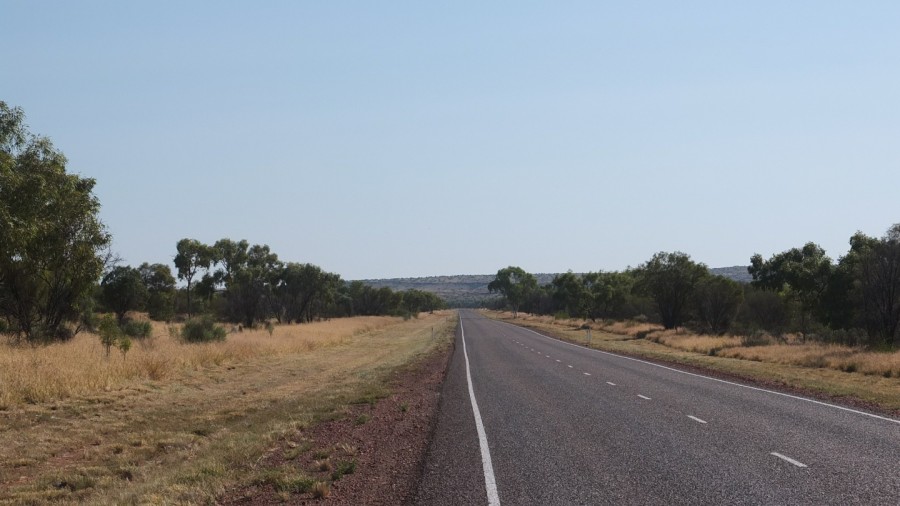 Hard to see on the wide view but there is some hills front of me! 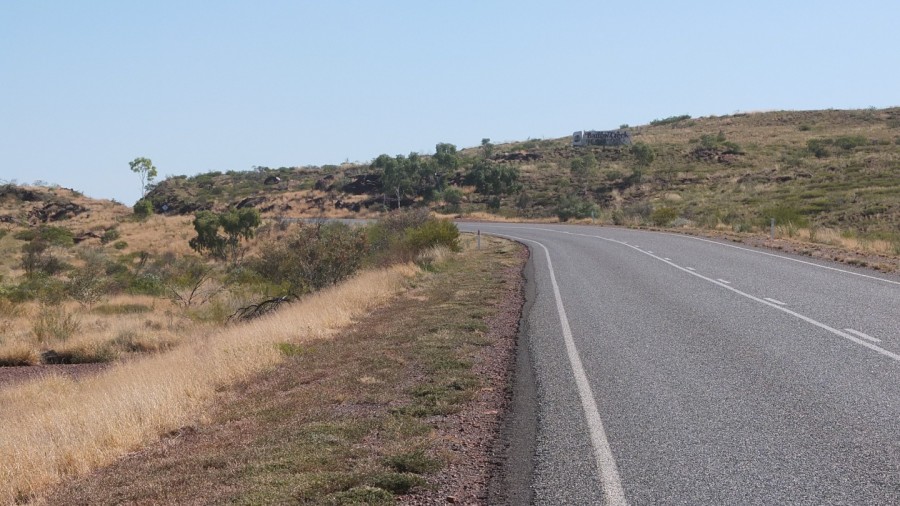 Yep, look :-) I’m not too far from Barrow Creek I guess because there is a sign there. 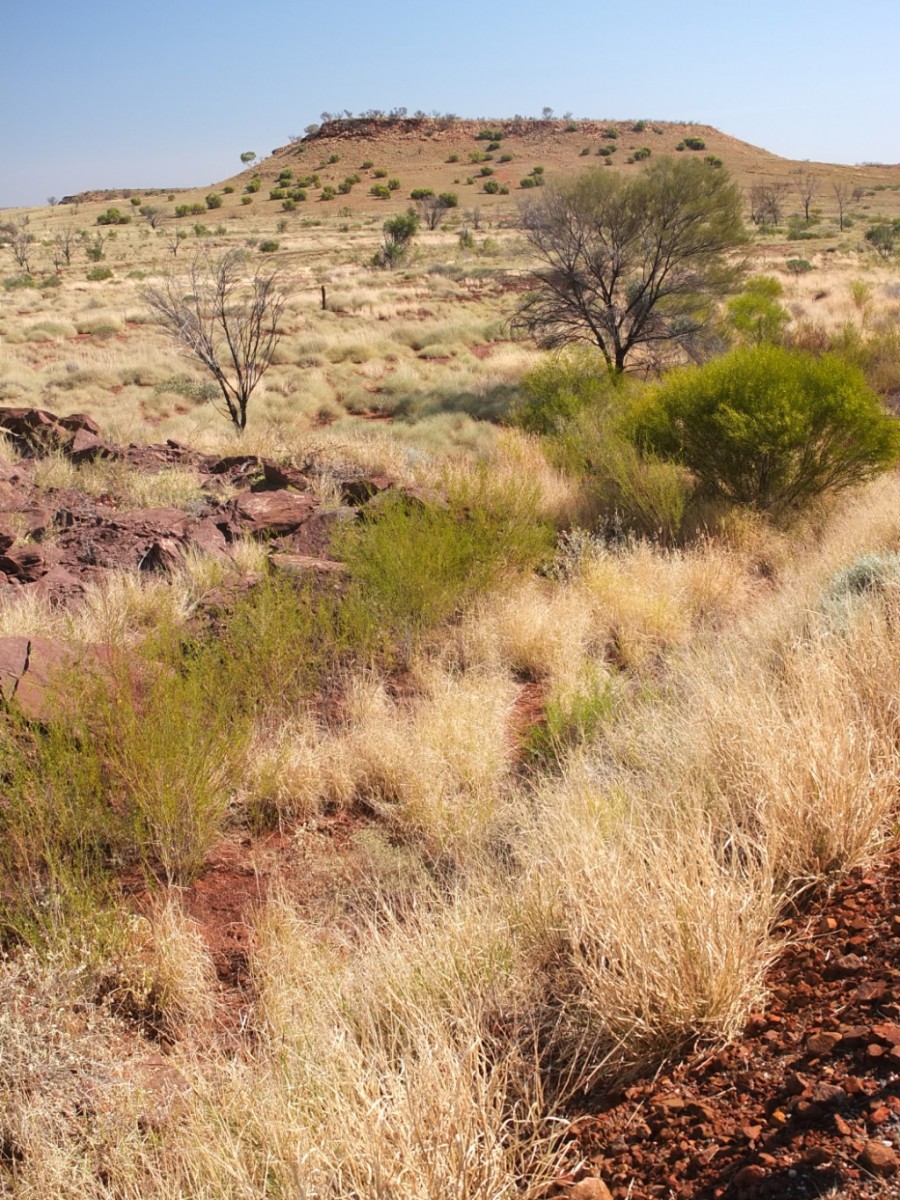 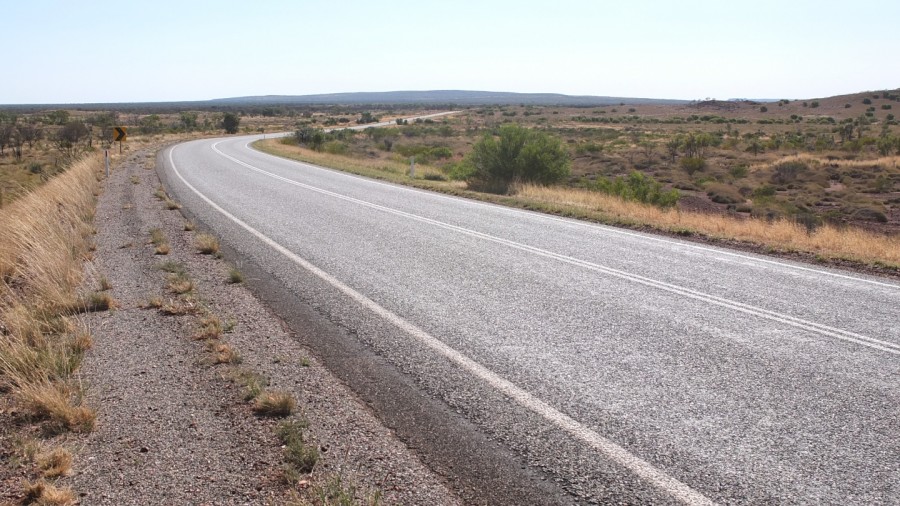 I will have a short break somewhere around before doing the last bit to reach the roadhouse. 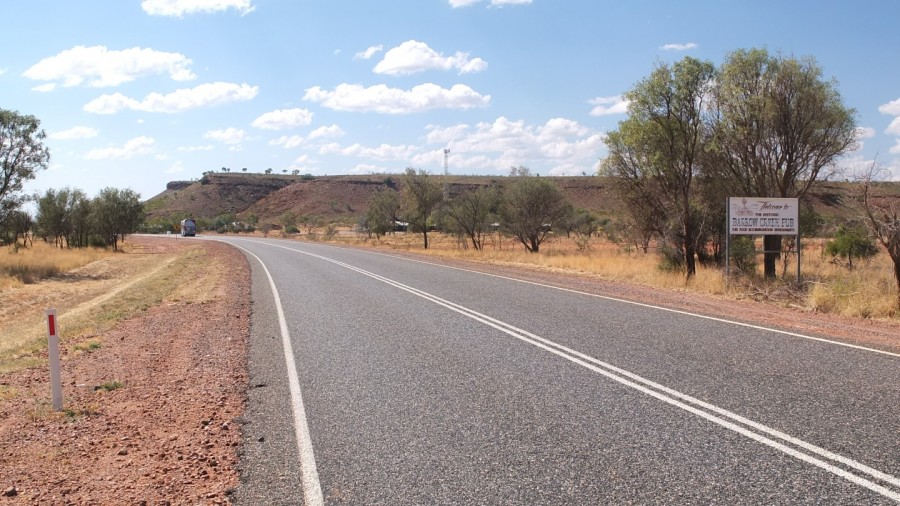 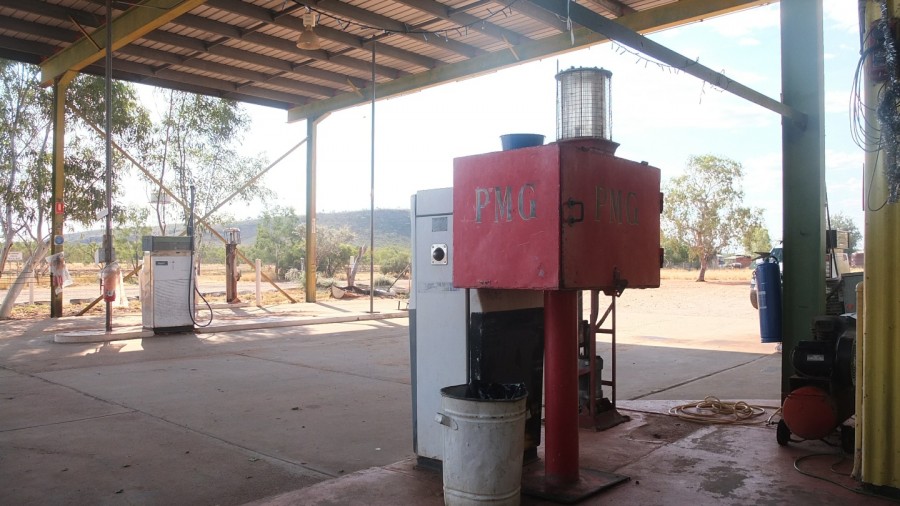 As every roadhouse, their main business is filled fuel tanks :-)

There is a tiny shop on the left side with crazy expensive stuff. On the right hand side, the main entrance of the pub which looks like a back door. I’ve seen many people coming here a bit confused like I was when I came here. 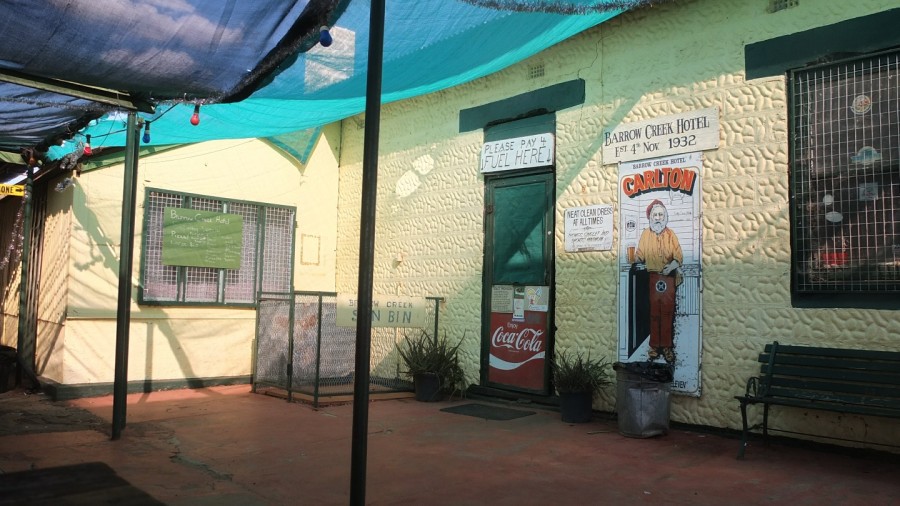 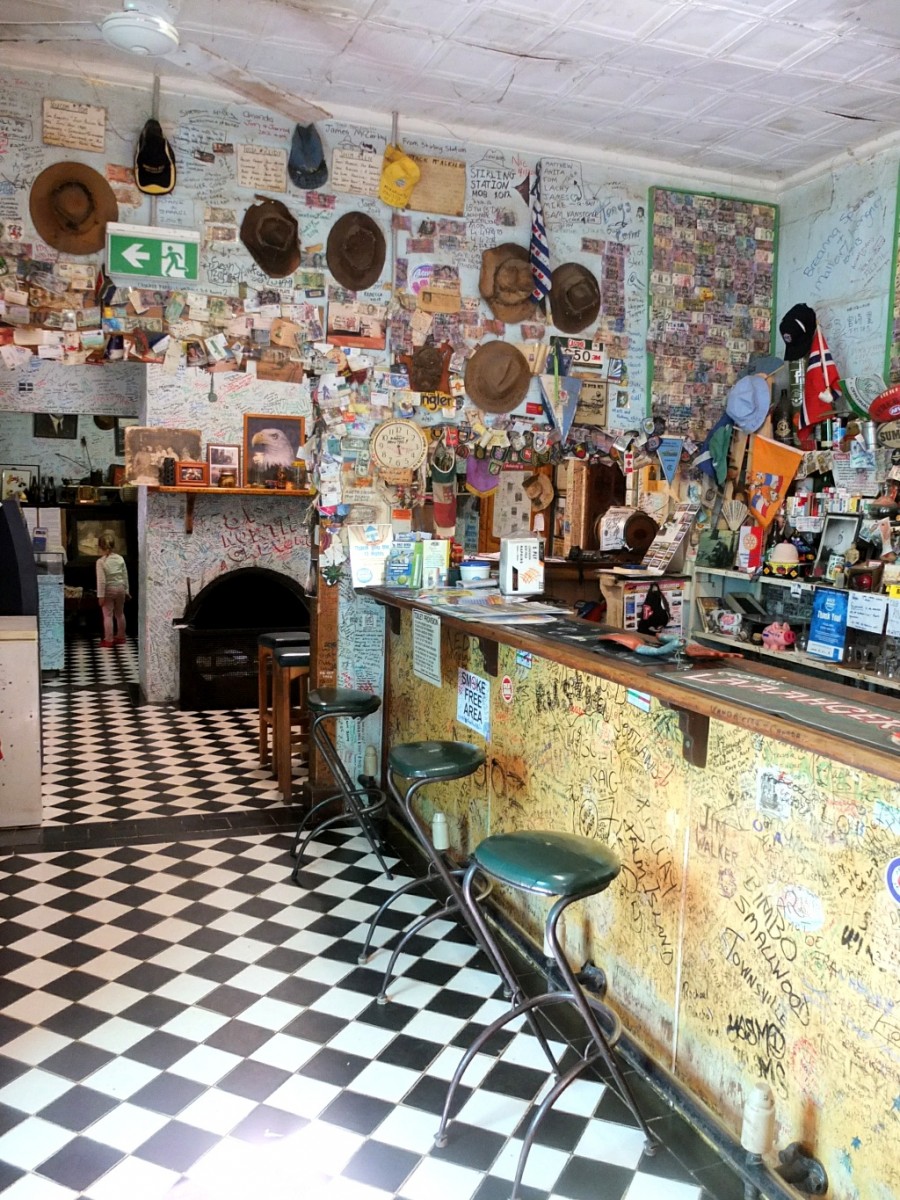 This place is crazy. 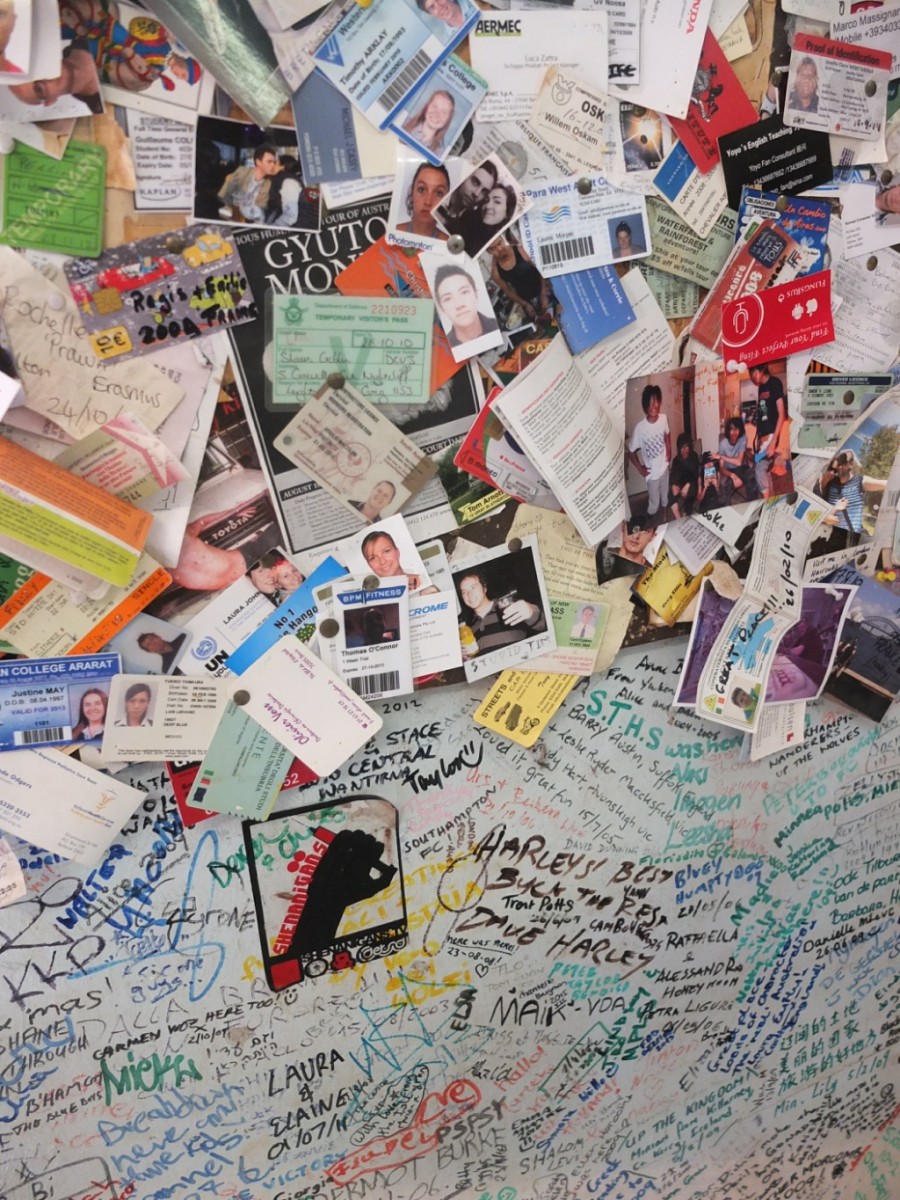 Every single centimetre of wall has been used by people to write, stick pictures or anything else. They even write on the fans. 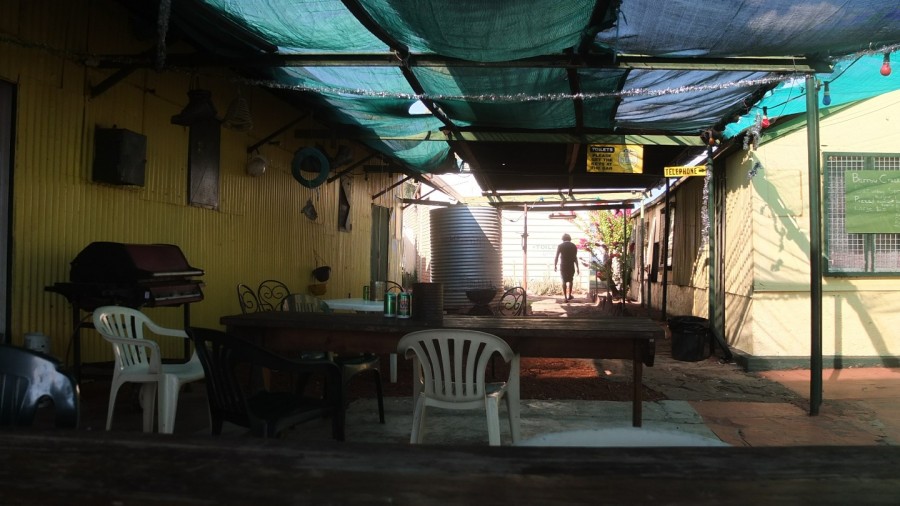 I’ve bought some chips again for 6 dollars! but well, that’s all I can spend here. Then I’ve cooked my lunch here. There was lots of Aboriginal here an hour ago but I think they left because they reached their limit of Alcohol. I’m not sure but it seems that pub around here sell a certain amount of beer to those guys. If they wouldn’t they all get drunk everyday. 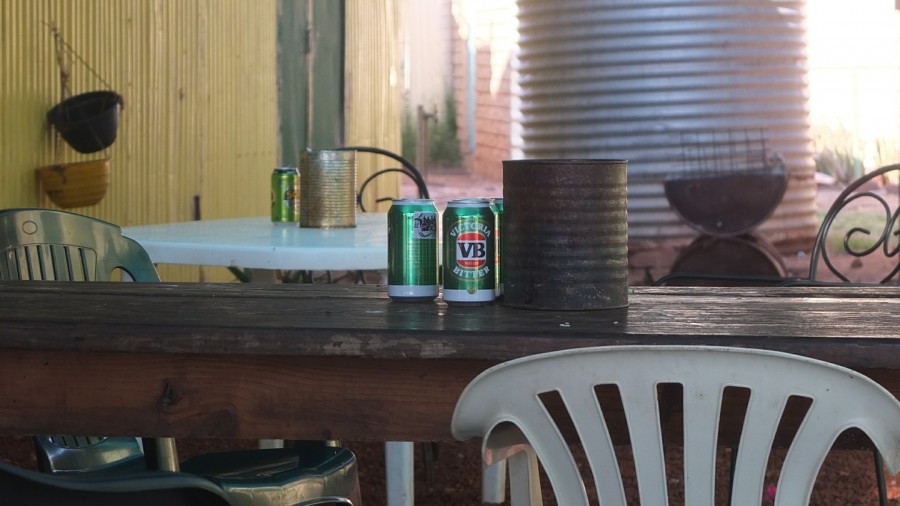 That’s all they drink, VB beer, $6 one can here! They are just wasting there life and health. And when they can’t drink, they smoke… So I guess they all drove to the next pub now. This few percentage of Aboriginal population create a bad reputation for the whole lot. Most of the tourists are scared of them. I understand why as they look like drunk zombies. I’m sure the communities who keep themselves out of this modern broken system are fine and very nice people. But these guys are lost and the Australian government is in such bad position to help them. I never talk with someone who has a good solution for them. 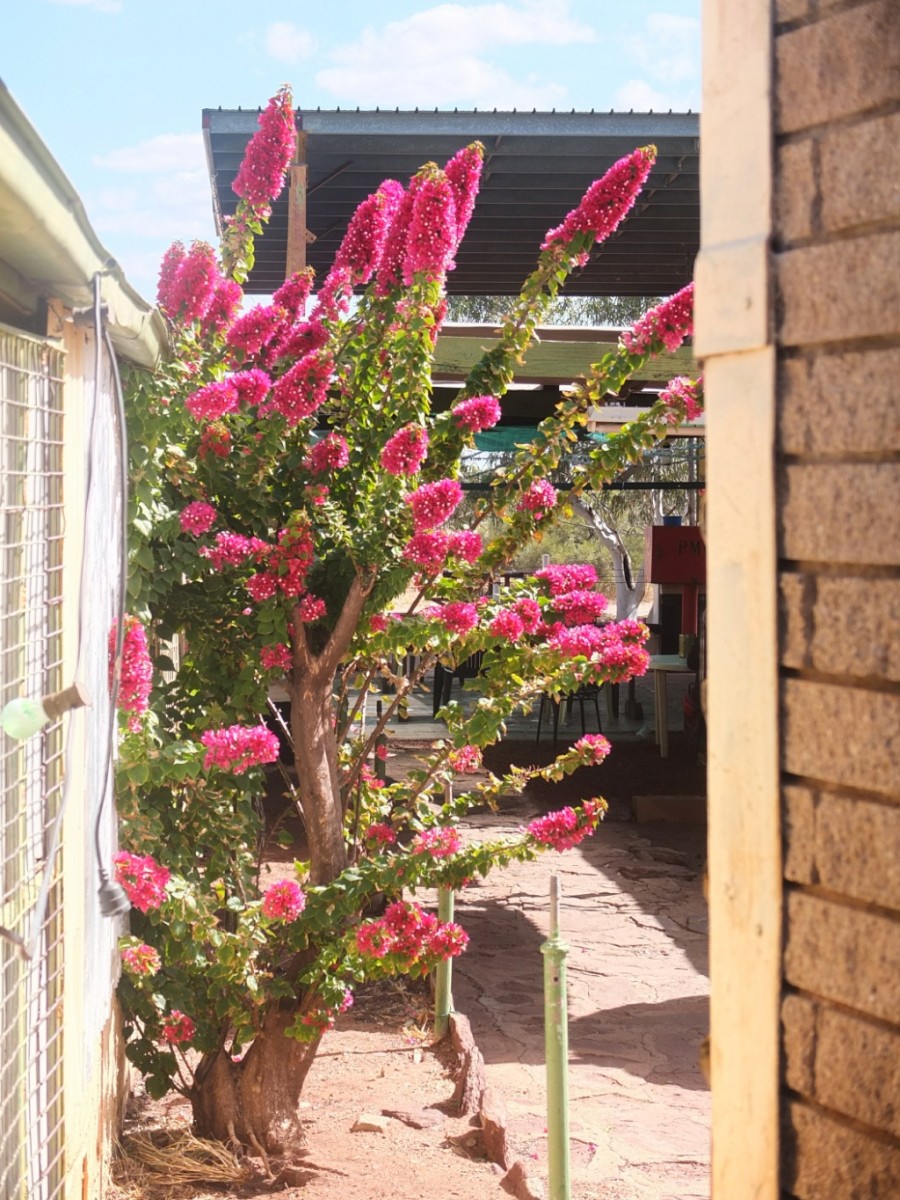 On my way to the loo, there is some nice flowers. No more details. Ah yes, the toilets here are in pretty bad condition. Nearly everything is broken and dirty. The owner makes certainly a good money (for $6 a small cup of chips) and they don’t care about the rest… 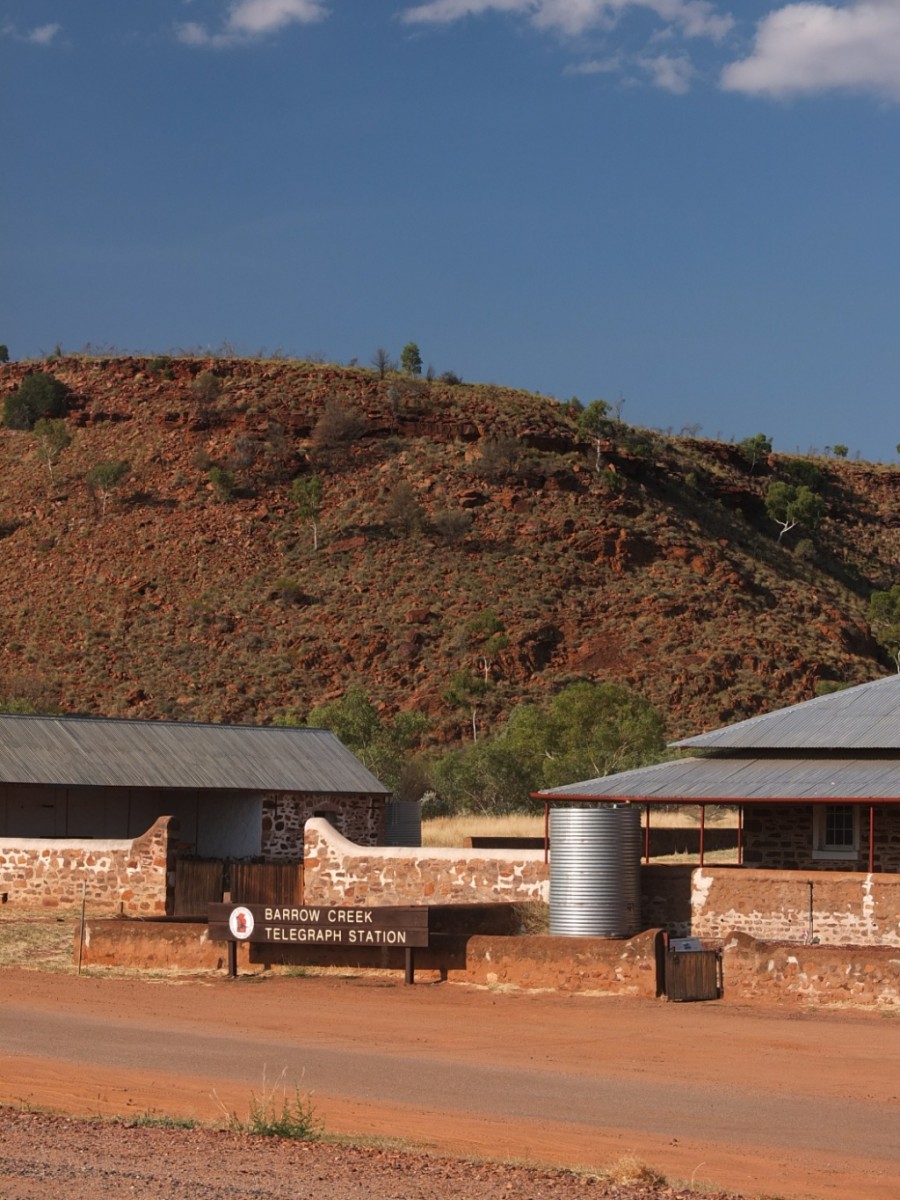 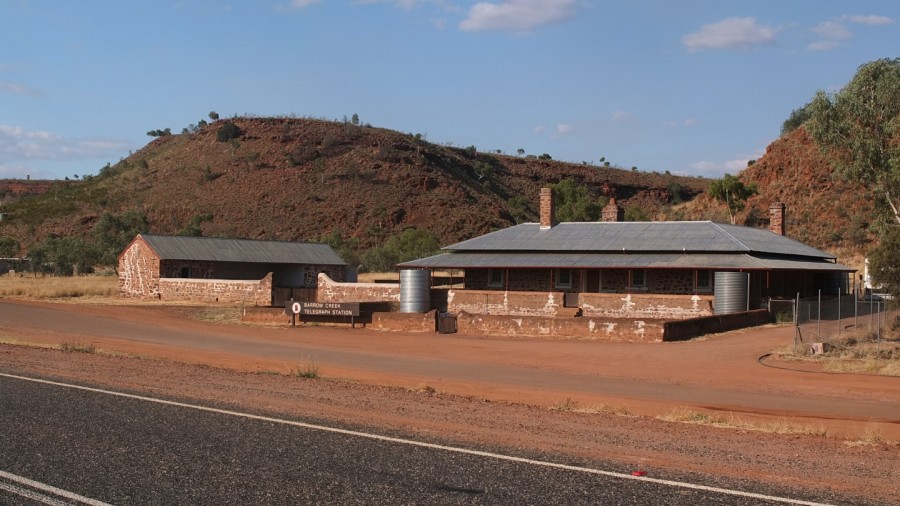 This is the historic telegraph station and it does not seems they do anything with it today. I mean like a museum or something. Every doors and windows looks like locked up. Well, I’m gone. 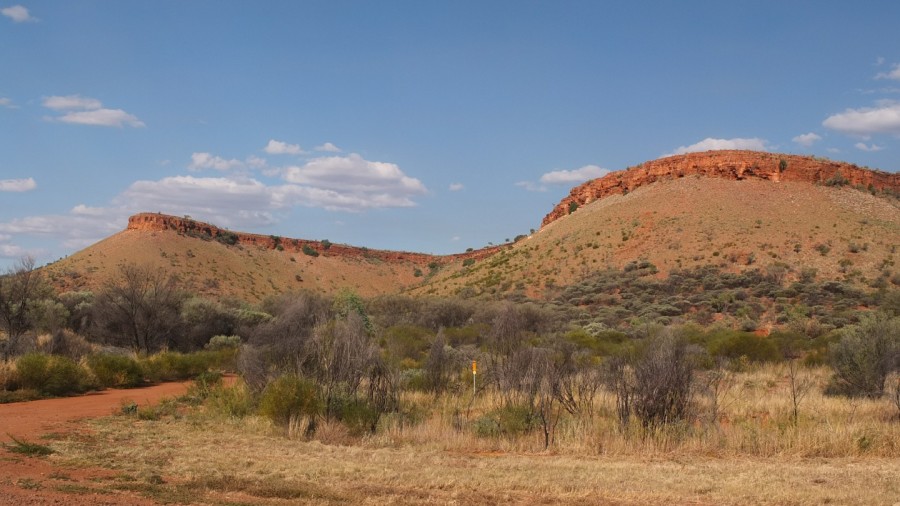 This is not too flat around here finally. 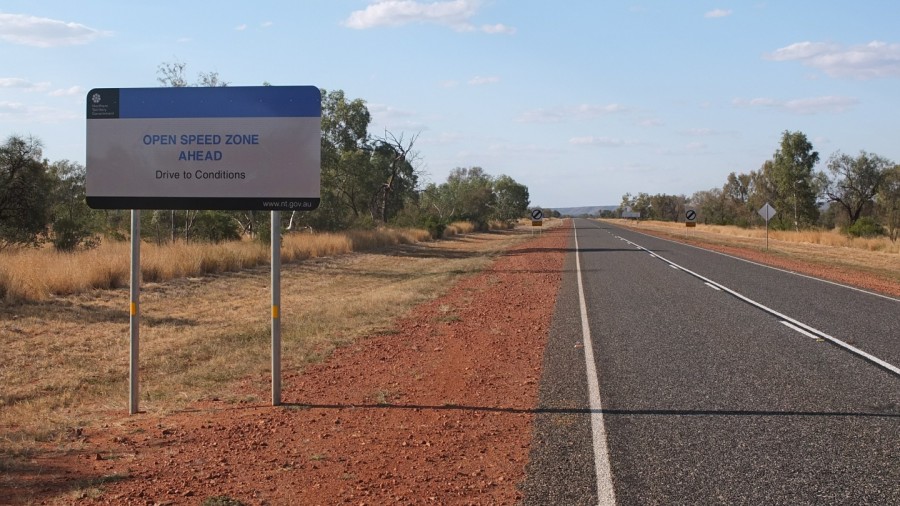 Sorry, I’ve spoken too fast :-) Note: In Northern Territory, parts of the road are Open speed zone. In fact, I understand that as it’s always flat and straight. The limited zone are 130km/h or 100km/h when in the other states, the maximum is 110km/h (if I’m right). I don’t feel unsafe at all in those area because travellers don’t drive too fast: Fuel is too expensive :-) 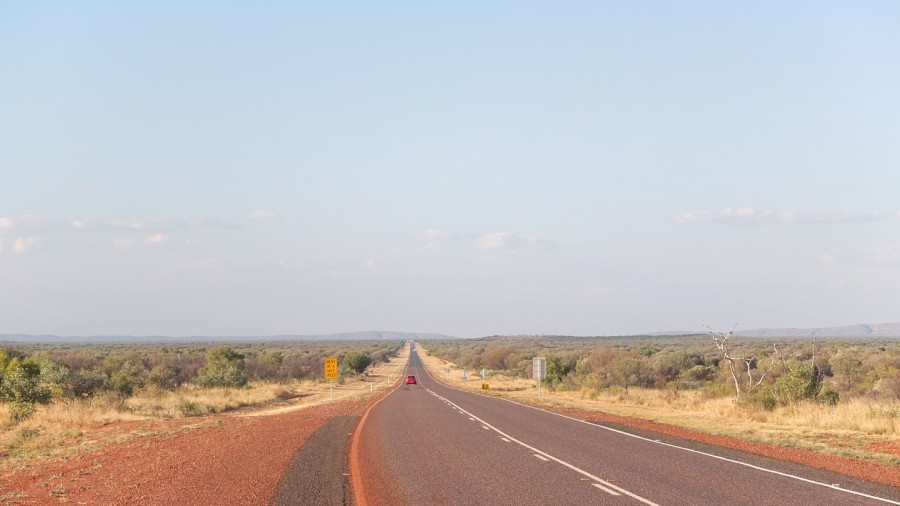 I’ve just stopped for 20 minutes to recharge my GPS. This is a NICE view :-) 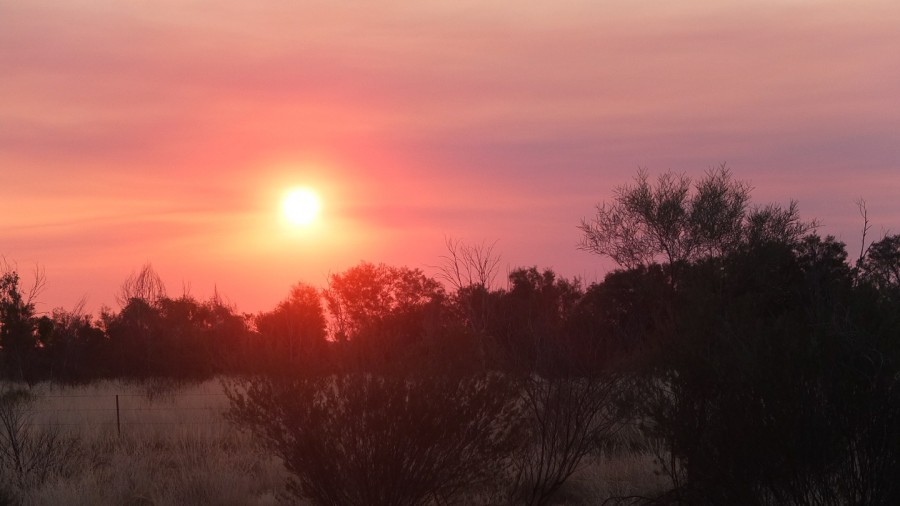 The sun is now quite low. Actually this is a very nice time to cycle. The tiny amount of humidity which comes out release a nice perfume in the air. The temperature is very pleasant and the wind is gone. That means: 25km/h! Ziouuu! 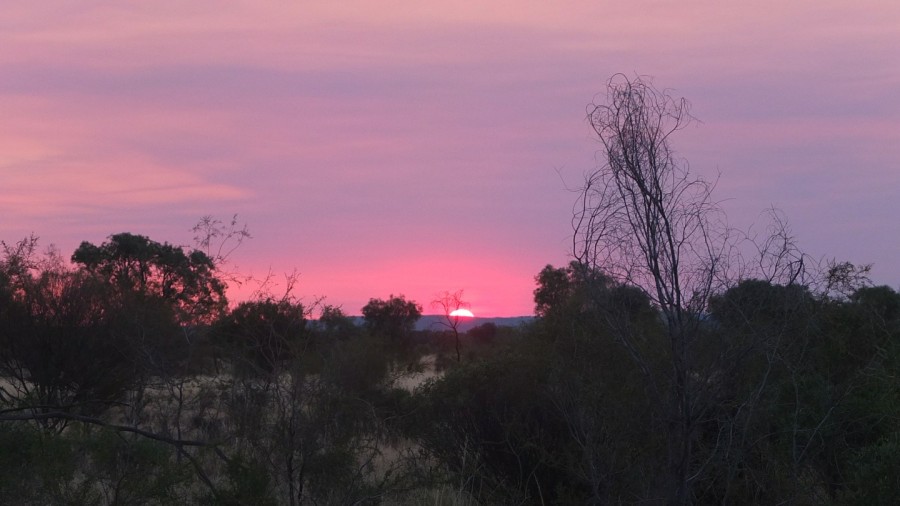 That picture does not represent the reality unfortunately. The sun is actually bright red! 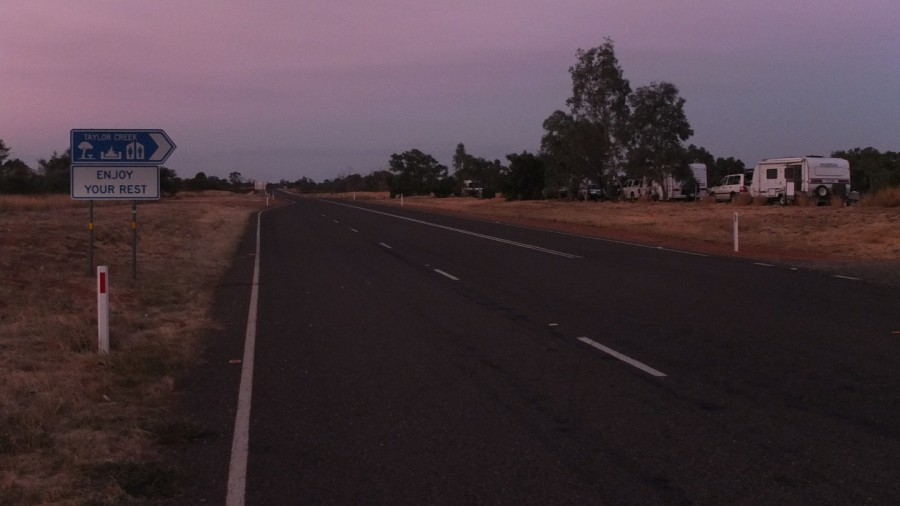 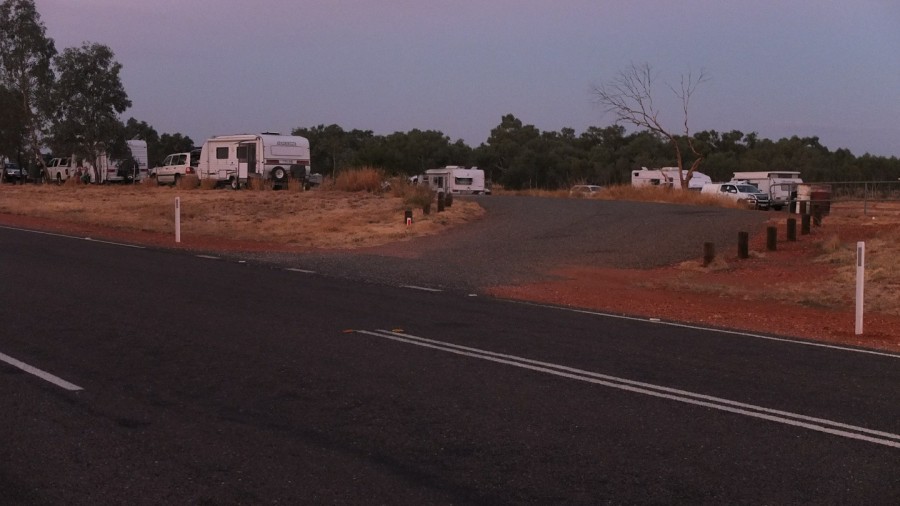 This place is packed!

I had to turn around a bit to find a spot. Then I met an Australian couple and a young Italian couple. We had a chat all together. That was nice. The Australian man put a bad subject on the table when he asked: “Do you know who invented the pizza?” haha. I thought it was the Italians. But he said it was the Frenchs. And then he said it was the Australians. He even cooked for us 3 slices :-) Finally I don’t know who invented it haha! Wikipedia gives the favor to the Italians apparently :-)
Finally, just before we got to bed he came back with that murder story and the movie Wolf Creek (Which is not too far from where we are now). Ah lala, are you trying to scare us?