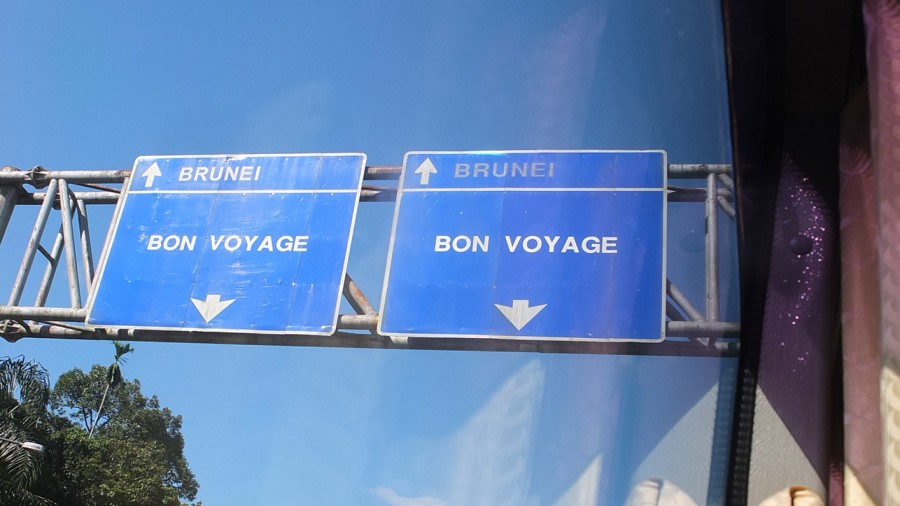 The next and last big step of our trip is to go to Miri from where we will fly back to Kuala Lumpur later. We also want to visit the Niah cave which is about one hour and a half from the same city. Today is a real mission. When we woke up this morning, we could barely walk. Our legs are all cramped from Kinabalu. We feel like we are 80 years old guys who struggle to go down a single step haha. This is so hard. First we walked to the bus station which was a painful start. The thing we did not realised yet is that to go from Kota Kinabalu to Miri there is 9 borders to cross. Yes, nine borders! Why? The first one is the one from the state of Sabah to Sarawak, in Borneo. The others are from Sarawak to Brunei to Sarawak again, to Brunei and finally Sarawak again. If you look at the map you will realise that Brunei is in two parts. As Singapore, this is an independant state. So every time we cross a border we have to get a stamp on our passport. Make sure you have minimum two pages free. Now that’s okay, but the worse is coming. Every single time we had to go down the bus and line up front of the immigration office. Every single time we had to come back in the bus. They forgot something… We are 80 years old today! we cannot walk! This is pain in the a**! Naturally we had some other stops along the road to have lunch or buy some snacks… Here we suffered again, life is so hard! haha. The positive thing is that our free Malaysian visa is 90 days again :-)

Once we got to Miri, the bus stopped at the “long distance bus station” which is 4km away from the city centre. We did not even have the time to get off the bus that taxi drivers were around asking where we wanted to go. We asked if there was any bus around. Their answer was “no”. “really? what a surprise…”. We finally met a nicer guy who showed us a shortcut to reach a petrol station nearby. “From there, you will find a local bus station”. “Oh, Thanks”. To get there, there was a tiny hill. We would normally not even notice that but today, being 80 years old, wow, that’s hard! haha.

The bus station was few hundreds metres from the petronas station. As soon as we got there, a bus arrived. Cool! The trip to the city centre cost us 1.40 ringgit much better than the 20 ringgit asked by the taxis. We walk less than a kilometre to reach the cheapest backpacker we found online. The “Next room guesthouse” which used to be called “Minda guesthouse”. The online informations are still wrong and show the old name. The price for one night, is 32 ringgit per person in a 10 people dorm room with aircond. That’s okay. It’s good to rest :-) Tomorrow, Niah Cave visit :-)