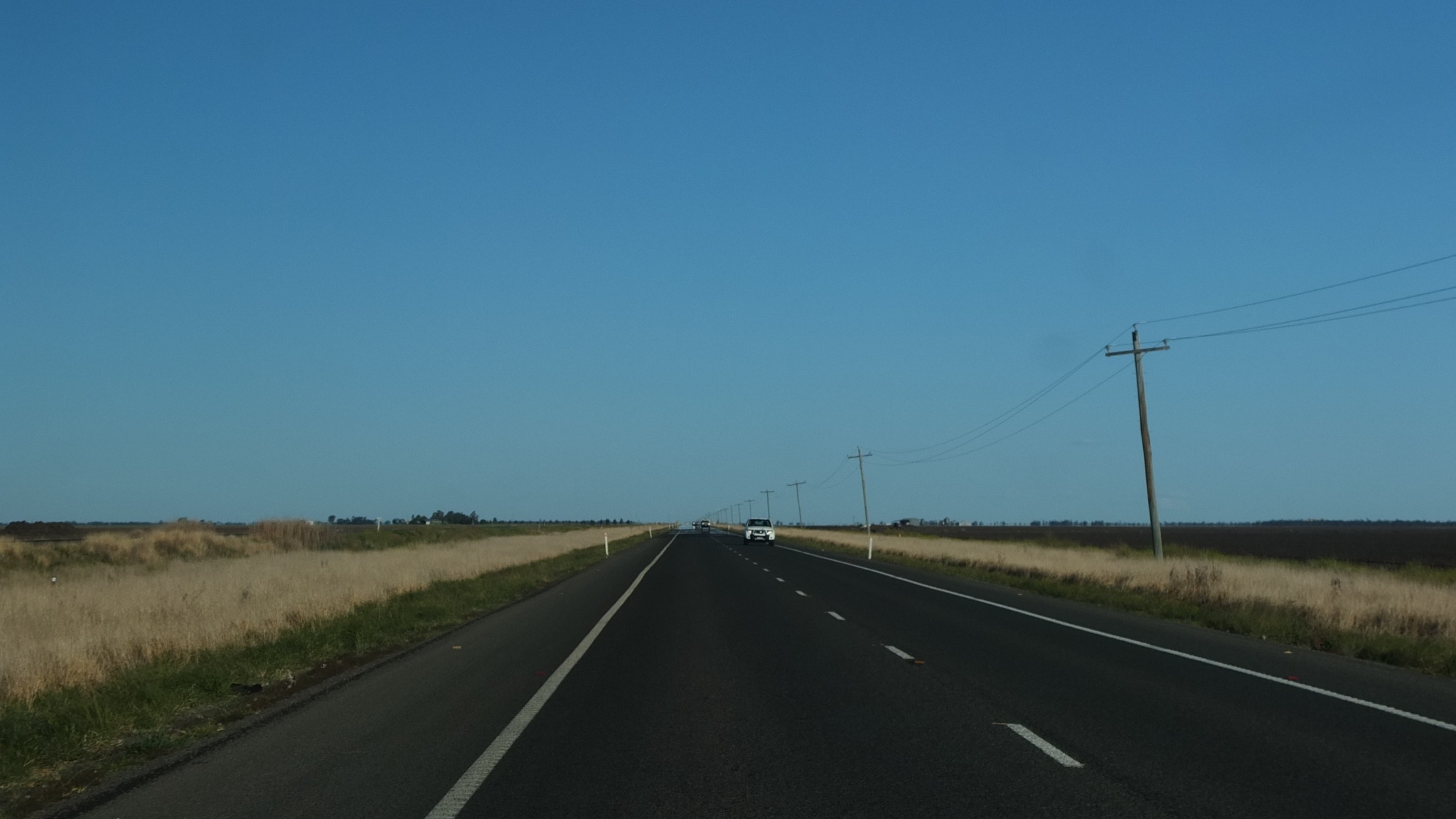 This is my third driving day and I hope I will reach a place near Brisbane. Tomorrow I want to be ready as soon as possible because I must leave that big city and find my way towards the south. It’s quite hot during the day and I have to say : I used the air conditioned… hooo bad! Anyway, it’s 8:36am and after a good breakfast I’m ready to go :-) 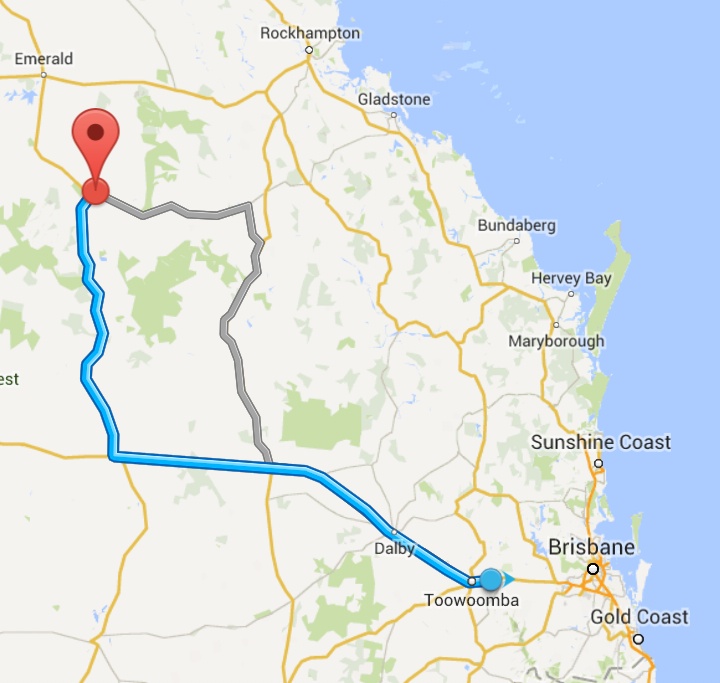 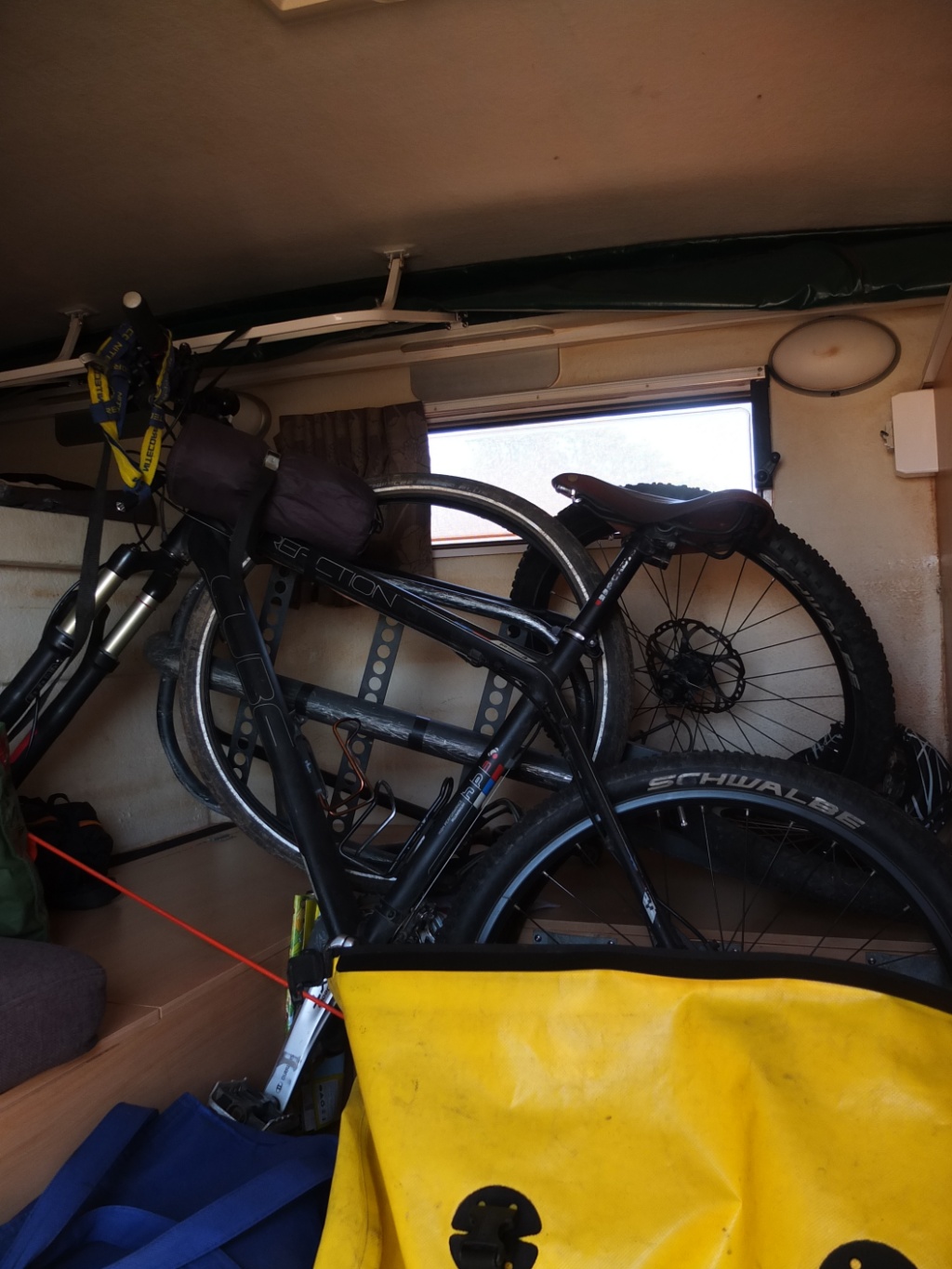 Ah, before I start driving let’s have a look inside this mini camper van. I had to separate the bike and trailer in 2 pieces because it’s quite small. But it’s working that’s the main thing :-) So here the living room. 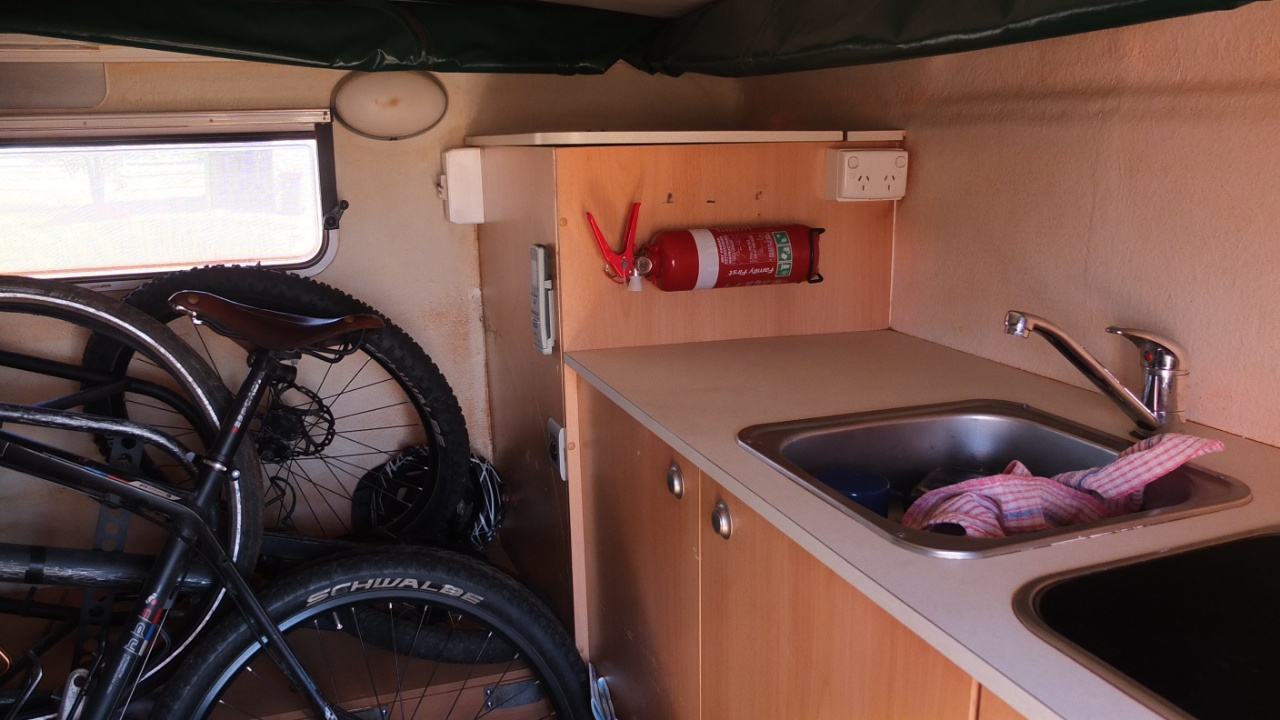 On the right side the kitchen. 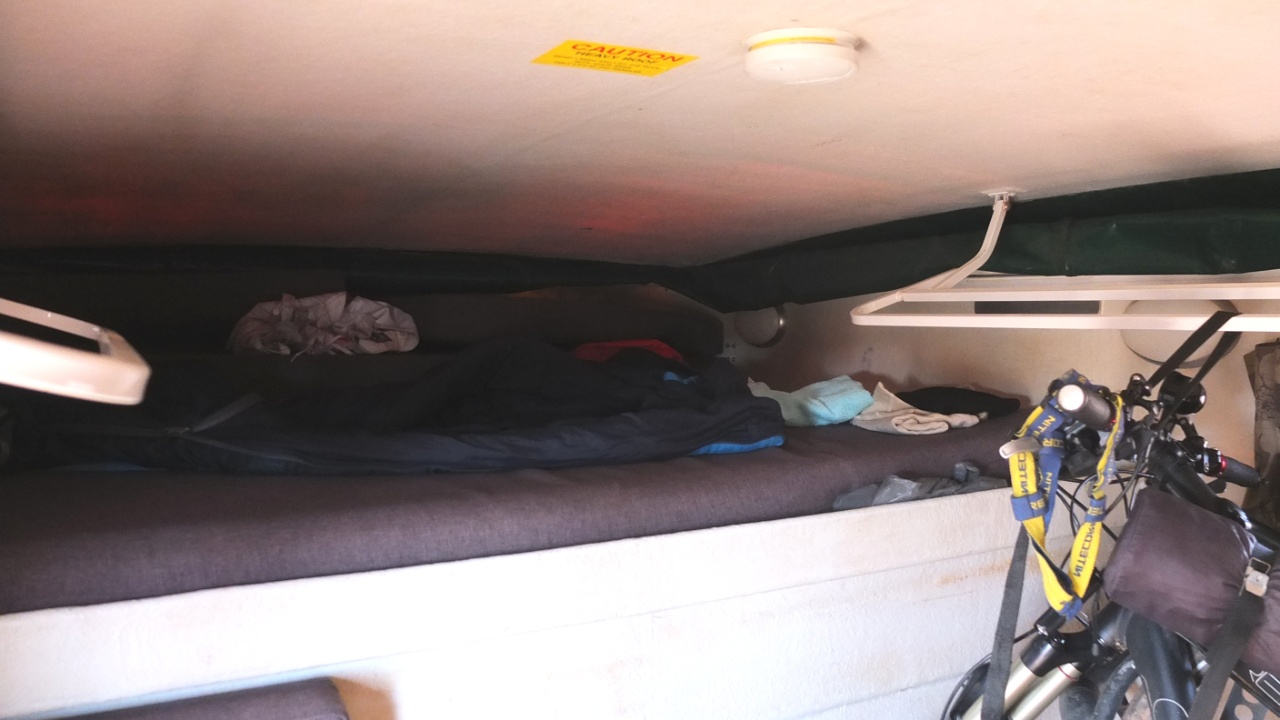 And then, on the left side the bedroom. Normally 4 people can sleep inside. 2 up there and another 2 in the living room :-) 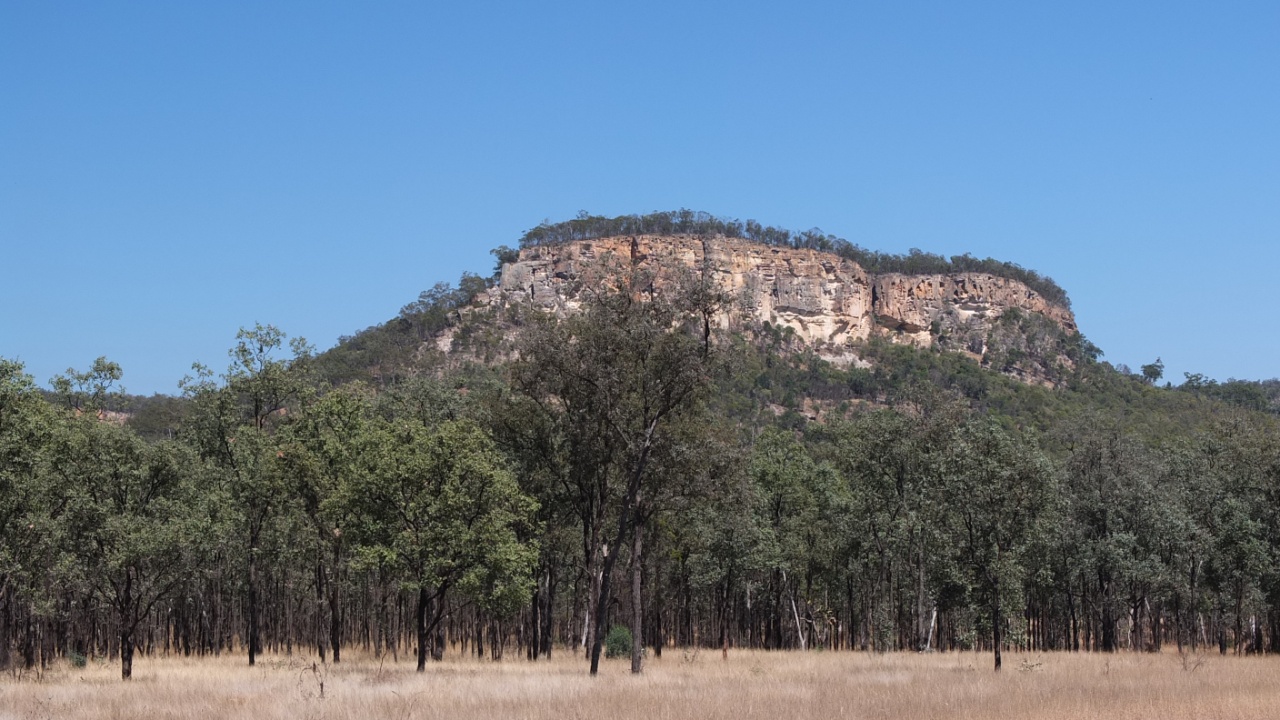 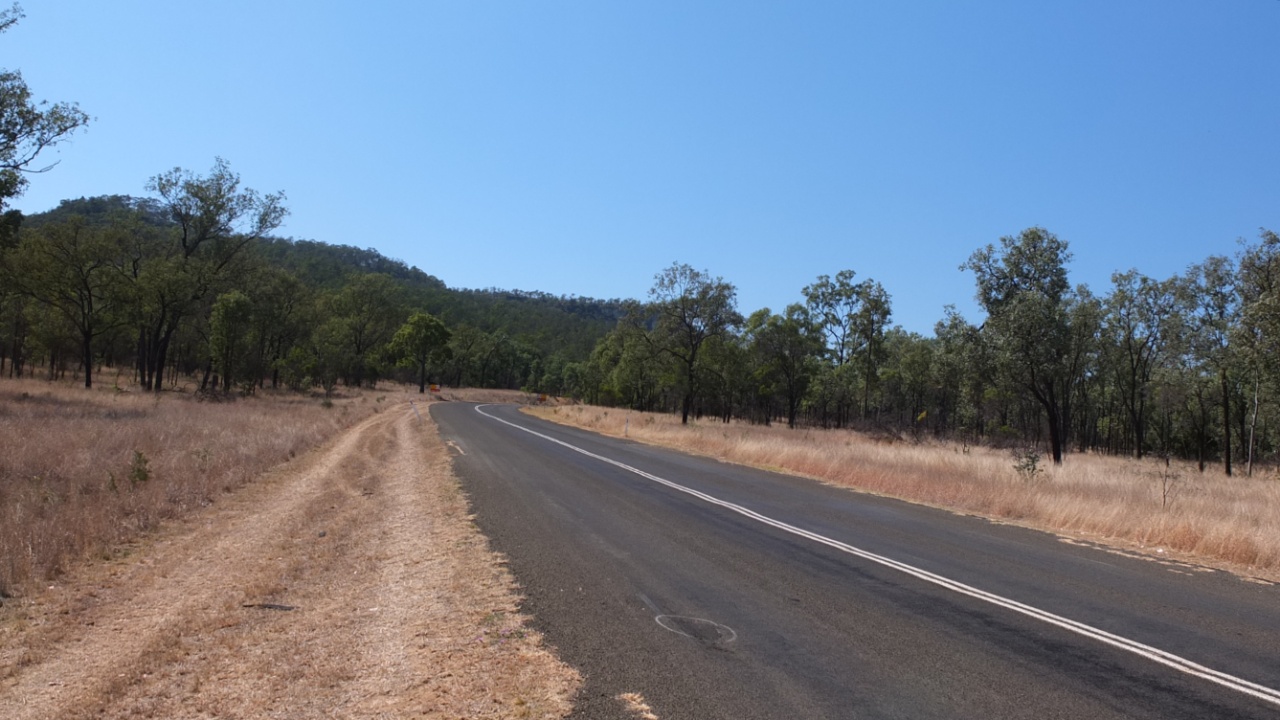 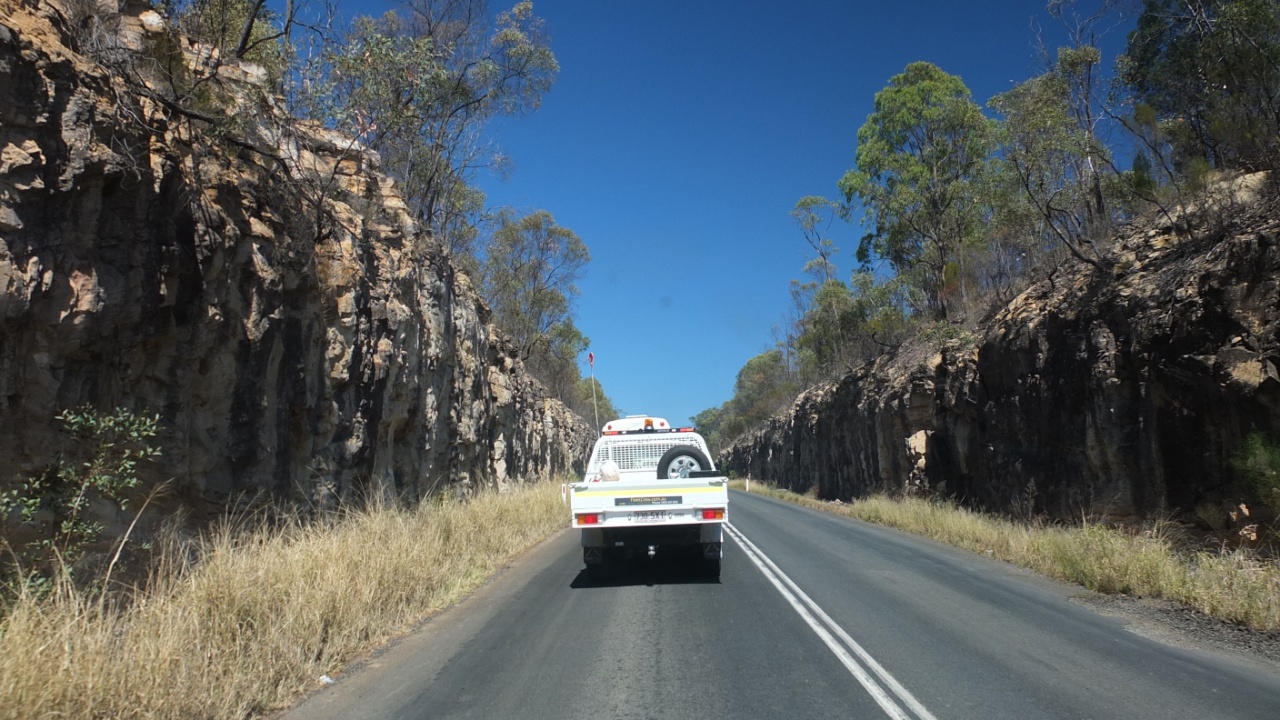 Rah! There is works all along this road and we are driving at 40km/h… At least this george is nice :-) 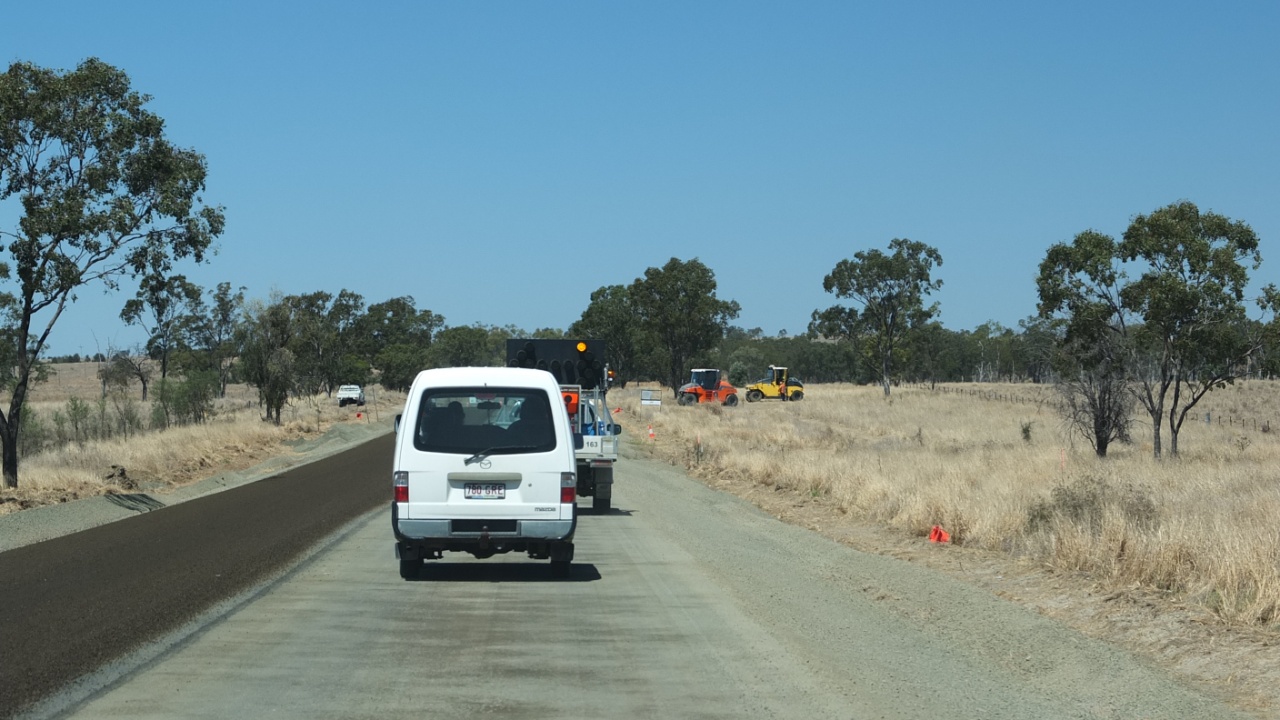 And again! Roads are so long in Australia and I’m sure when they will finished this one they will have to start from the beginning again! And it’s not like in France where we have 4 lines. It will be certainly so expensive here. 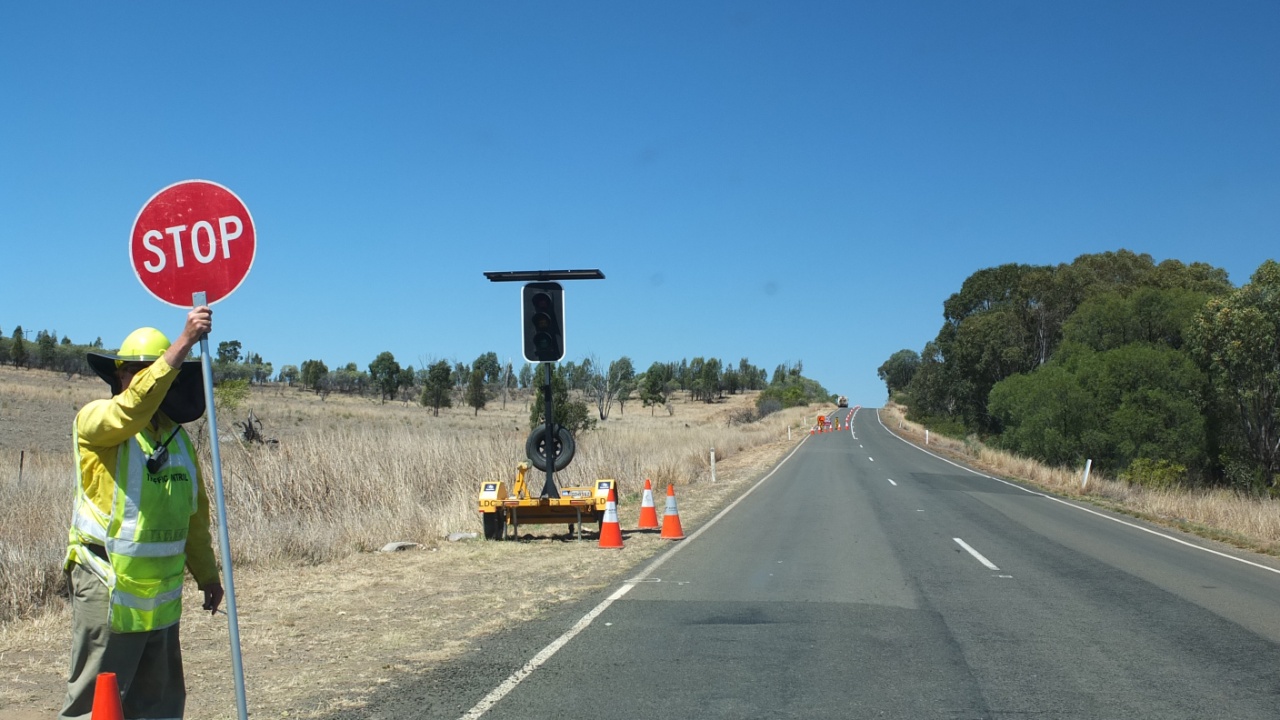 And another works part… I chatted with that guy. He lives in Brisbane and propose me to show me bats and other animals around the area. Hmm I’m sorry but I must cycle and find this bloody job! 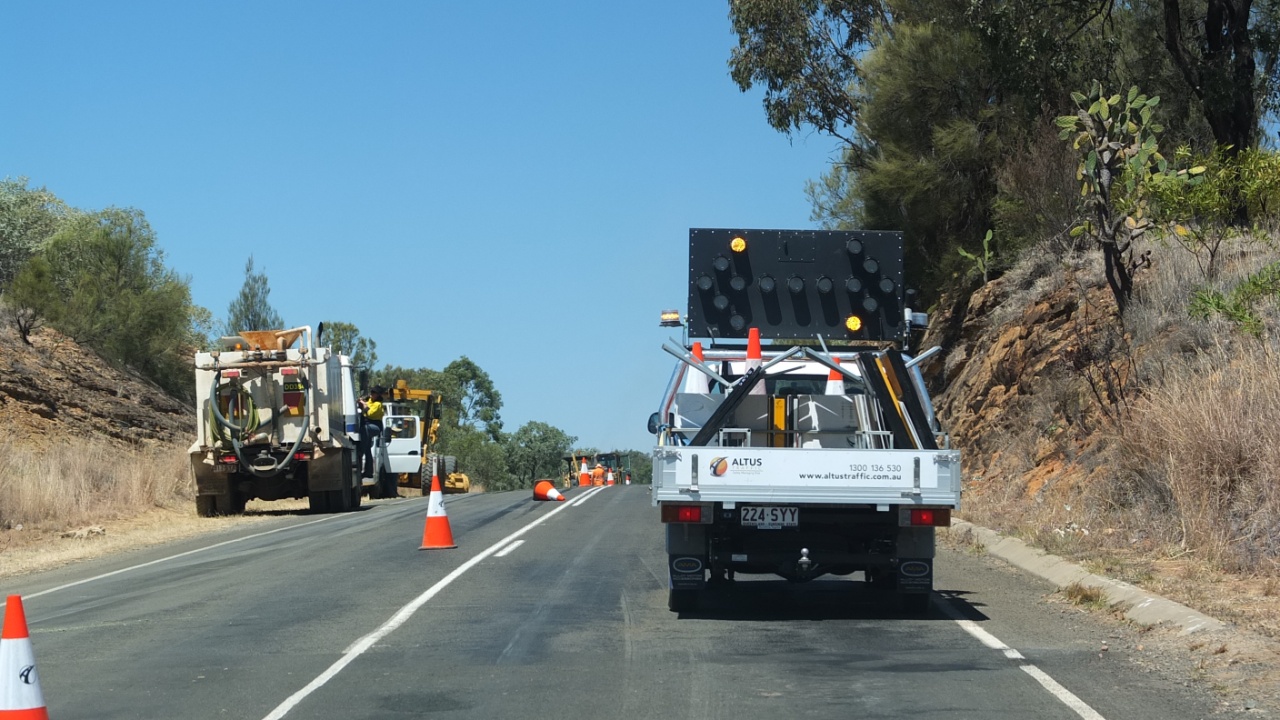 That’s strange. This car is leading us for the security stuff, to make sure we don’t drive at 100km/h and smash everything. We are not crazy!… ah but I forgot. French are in Australia … 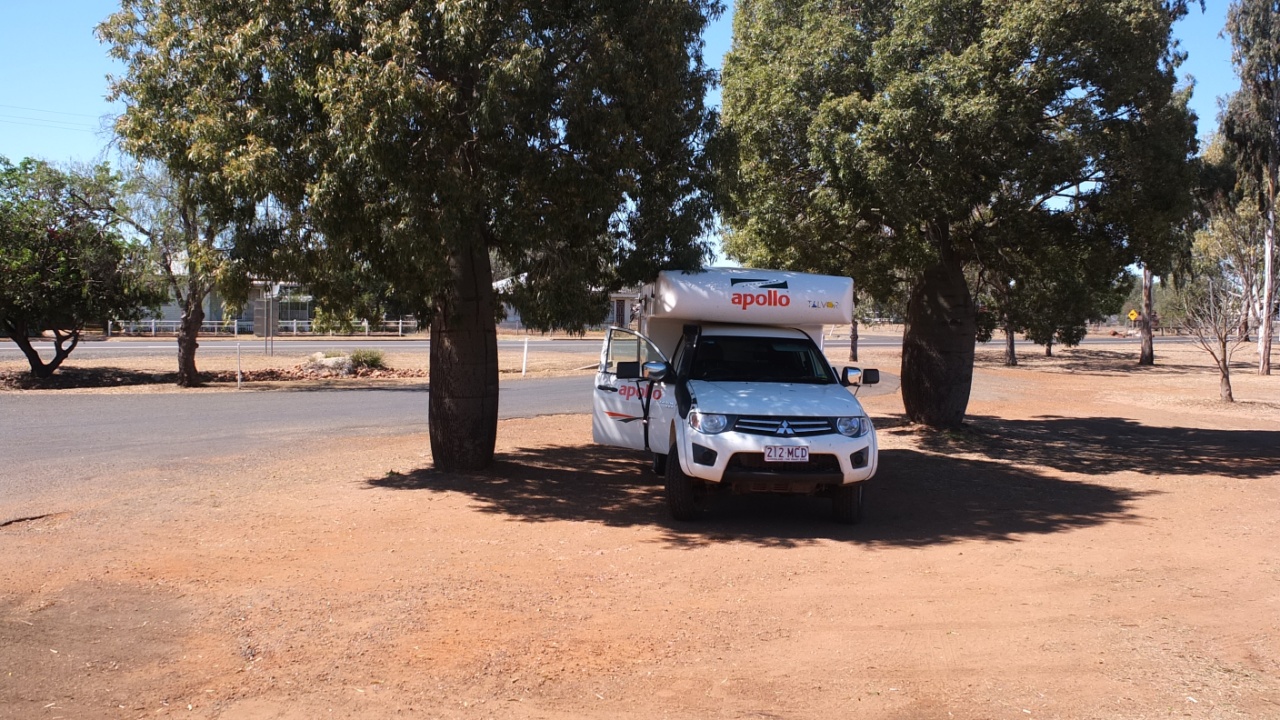 Fiou! It’s time for a break.
I found a nice shady place for the car. Very interesting isn’t it? Apollo. Reminds the company I worked with when I was in Napier (NZ). “Apollo apple”. :-)

I was looking for some petrol station but when I passed Roma (the previous city) there was the queue. Now I know the next petrol station is about 100km away and I have approximately 150km left. Should I come back or try? Hmm I’m going to eat and then I will decide. 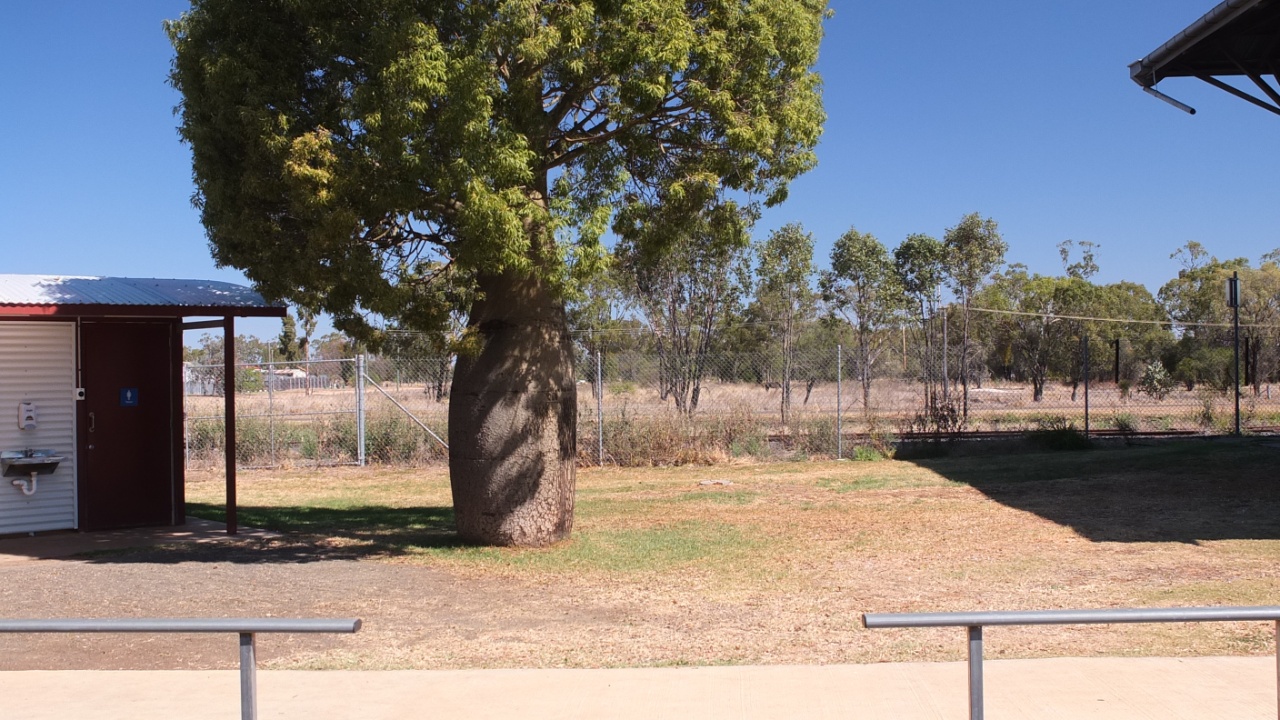 Those trees have an fun shape :-)

Ok, I decided to continue and stop at the next petrol station in Miles. I should have enough.
I’m driving at 95km/h without air cond’. I’ve closed the windows and… it’s hot now! I should drive behind a big truck and get sucked haha :-) No I’m okay. 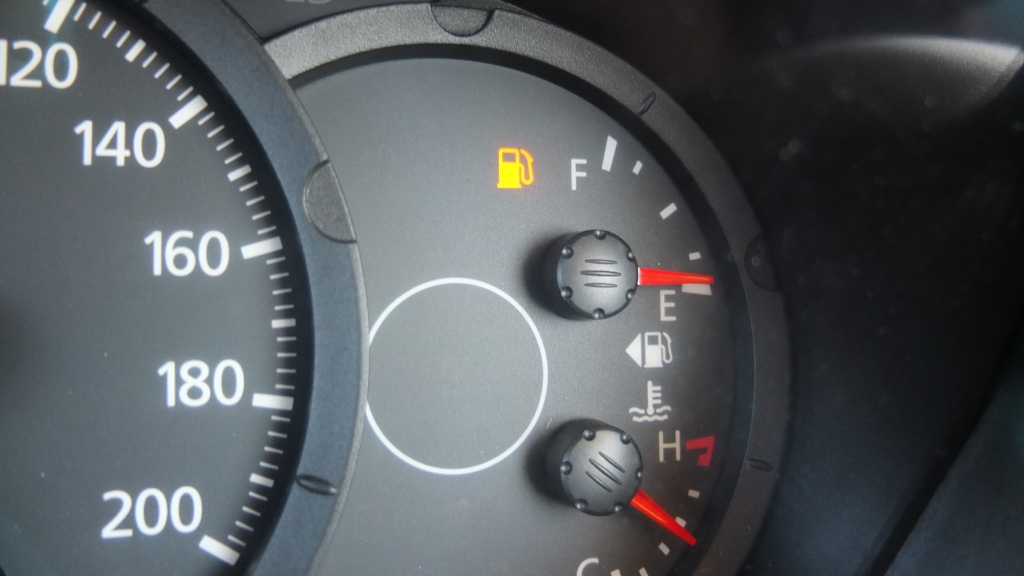 This road is the looongest road I’ve seen ever. There is even no end! Straight, boring and limited at 100km. What?! 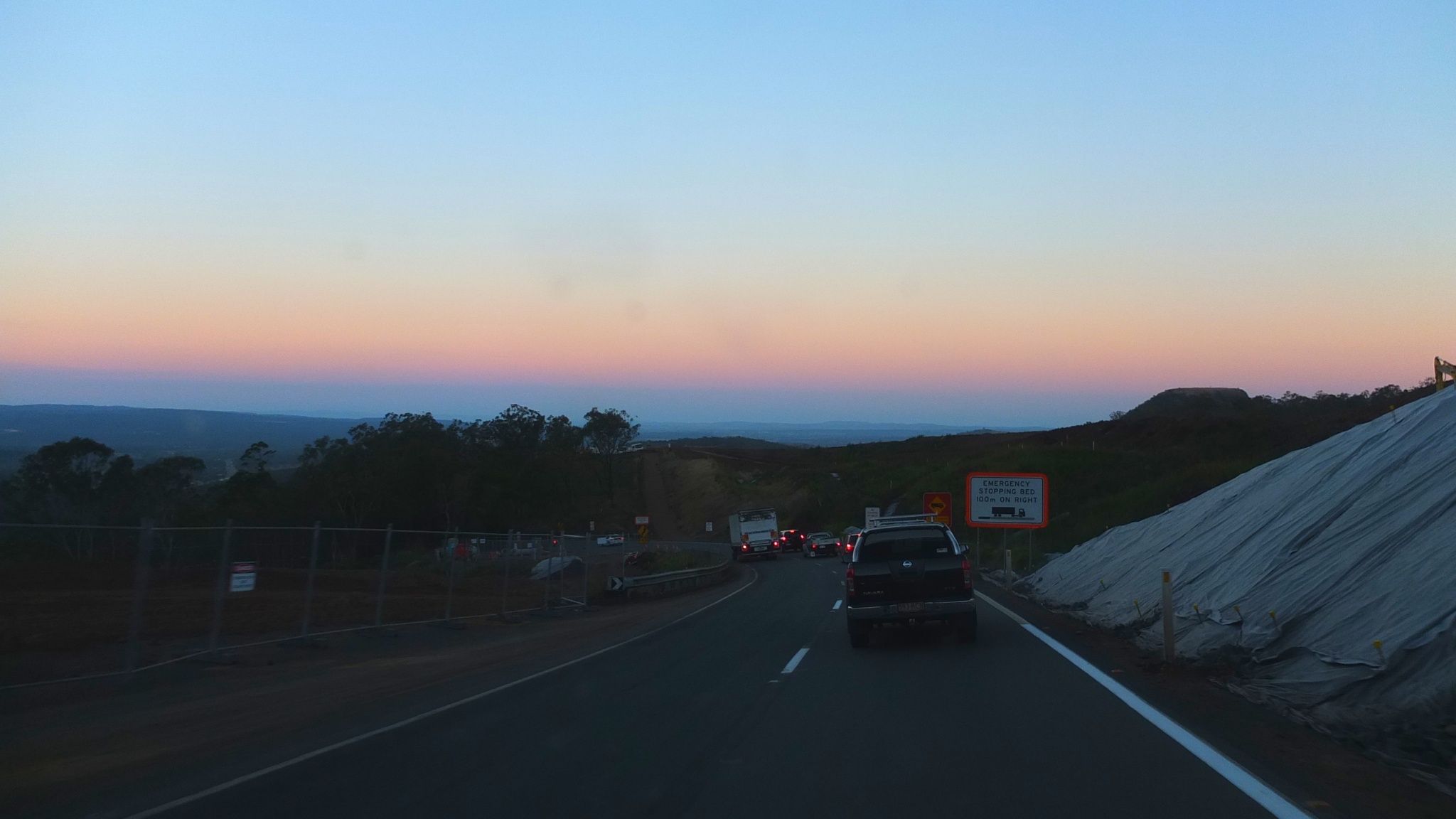 Oooh this is nice and the best view I’ve seen until now. I’ve passed Toowoomla and I’m going down this hill. I hope I will find a free place for the night.

Finally, after the hill I was engaged onto a highway but I’ve founded a rest area to park my car for the night. I will leave early tomorrow morning I think. I’ve got something like 100km to reach Brisbane where I will drop off the car and stick my bom onto my saddle again. Good night :-)