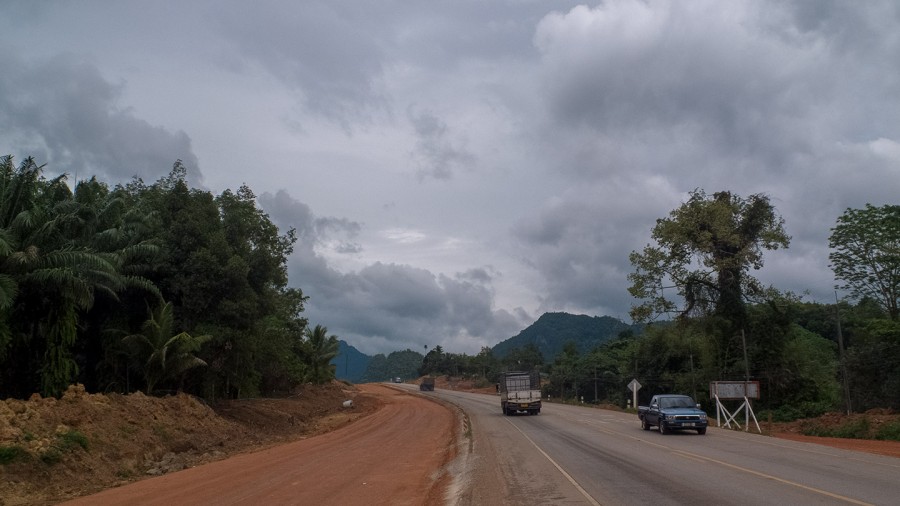 Normally, we would have been cycling to Ratchapraha lake together which is apparently a very nice place but I’m not in the mood to visit anything today. The only thing I’m thinking about right now is how I’m going to fix this hammock. If I cannot I will try myself. If that doesn’t work, I will be very sad and depressed. The weather is not very good today. That’s good because I can keep cycling between 11am and 4pm and reach Surat Thani today. Surat Thani is a bigger city so I hope I will find a tailor that is able to repair this specific material.

This morning, I left the camp, still furious (against myself). I left Stephane behind too and cycled as fast as I could. The first stop I made was for breakfast. A tiny place was offering food, something like noodle or rice. This is the kind of place I like because it’s mostly cheap and represent the real Thailand. There was only one long table where a woman was already eating. I sat on her diagonal and ordered “something” to eat: “I would like this one, like her, please”. I think they especially understood my pointed finger to her bowl then towards my mouth :-) The few people here were very smiley (compared to me). I was eating that soup, with noodle and other nice things in it when the guy who owns the place with his wife offered me a bunch of small banana. He mimicked himself the “strong man” to say: “This is good for you”. These were very delicious and special as well. They have little crunchy seeds inside (which I did not eat). I’ve never knew the existence of this kind of banana. Their taste is very close to the “monkey banana” I ate in Australia (Thanks Yoko :-). The few research I made online brought me there. They are coming originally from Philippines apparently.

Later on, I reached the next ‘T’ junction. Normally I would wait for Stephane so he can see where I’m turning but this time we are not going the same direction so it doesn’t really matter. And I’m still angry so I prefer staying alone. Soon after that ‘T’ junction, I stopped to verify something on my saddle. As soon as I started cycling again some guys seated around a table called me. I stopped again and joined them. They tried to ask few questions using basic english and then offered me a coffee. Okay why not. A guy seated on my right side was chewing something. Until now, everything is normal. But when I looked down to his hands, he had leaves, the leaves you find on trees. Heuuu, ok… The guy looked at me and gave me two of them. Then, talking body language, he mimicked the “strong guy” (again). Ok, so if I eat that I will be strong? Or maybe I should be strong to eat that? Well, let’s try… Mmmm, this has a nice taste of… leaf… beurk! (no I cannot say that). I must only concentrate on that strength I’m going to get very soon.

Soon after that, Stephane came along. The guys I was with called him (of course). Naturally, he received the same treatment. Coffee first, to start softly and then leaves, hahaah. The guys kept watching us as we ate. We tried to show that “Ho, nice, this is so good to eat raw leaf”. I think it did not work but they really enjoyed.

Finally, we kept on moving. We followed the same road for few more kilometres then Stephane went towards the lake when I kept cycling towards Surat Thani. 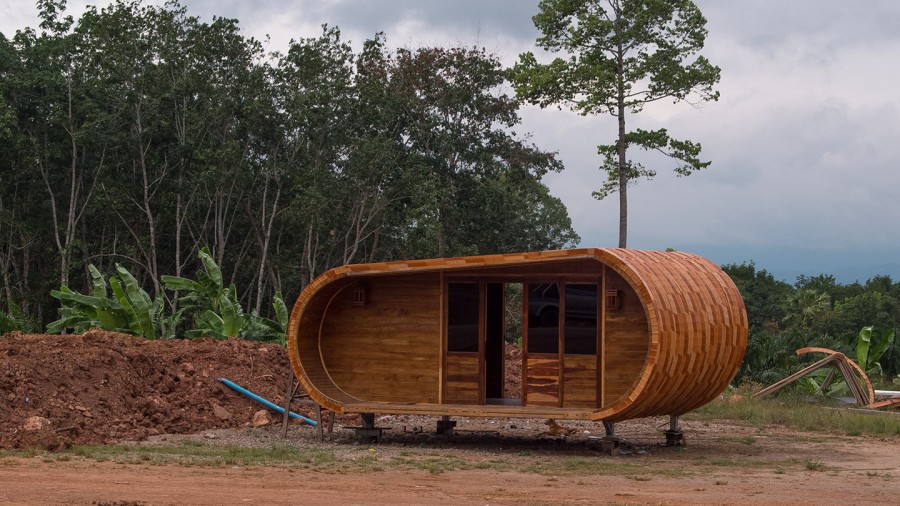 This road is not the best one I’ve been cycling on and the weather does not help to make it look better. Sometimes, surprising things happen along the road like this tiny house :-) A company, here, on the side of the road is making them apparently. Max, Marie? Are you interested? 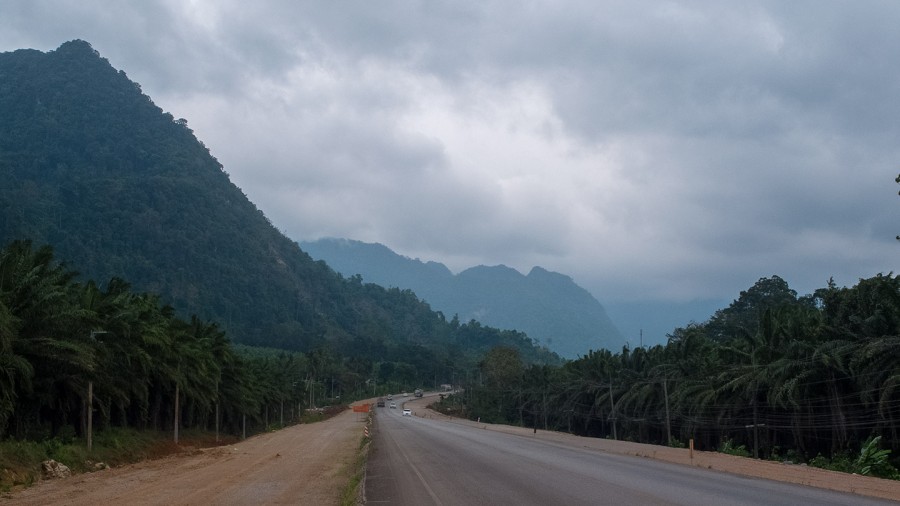 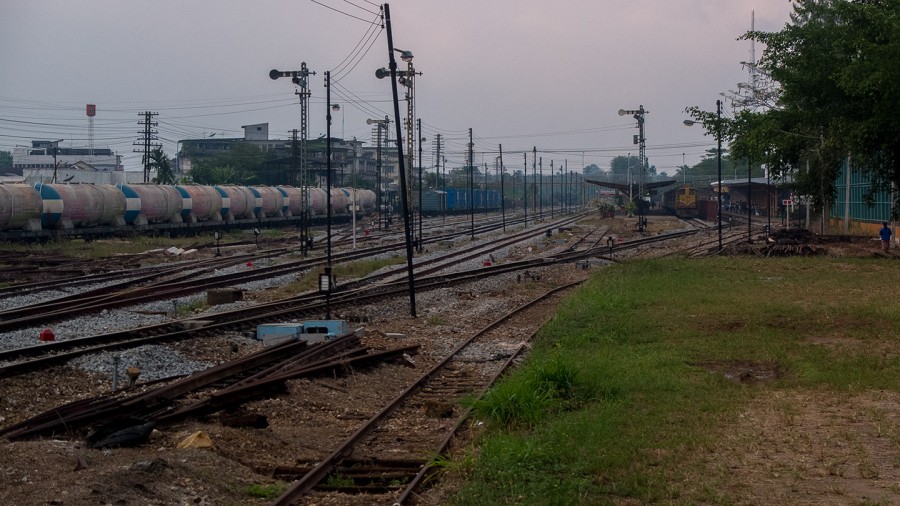 Finally arriving at the edge of Surat Thani after more than 100km few!
That’s the first time I see a train station in Thailand. I’m wondering how far north it goes because I did not see any until now. I’ve seen few backpackers too and I don’t understand why. There is nothing special here. Well, I don’t know very well the place but for now it doesn’t look wonderful. 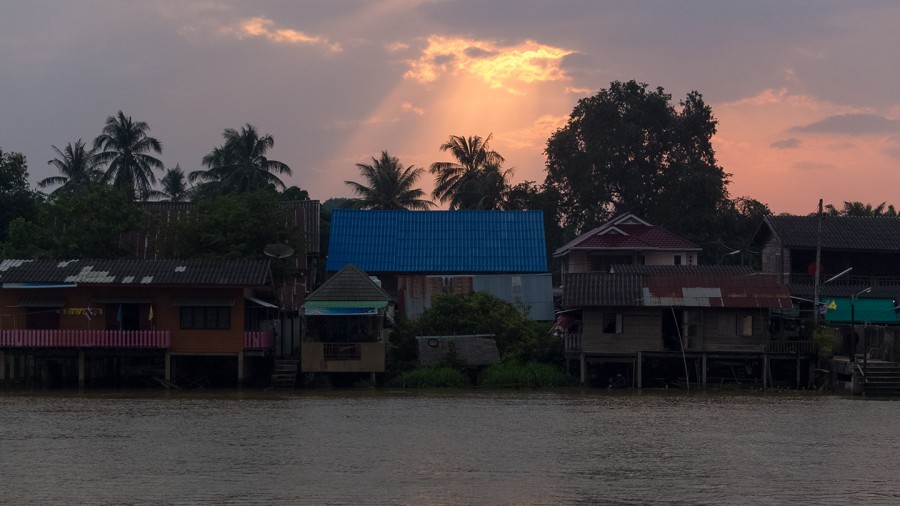 I’ve been lucky today until now. I’m now in Surat Thani for something special: finding a place that would repair my broken hammock. First I met a guy front of the train station. I asked him where I could find a tailor. Well, my phone translated that for me I should say. The place was not far away so I cycled there quickly. The first woman I met did not do this kind of work. I followed her in the street and she showed me another shop few metres further. I entered in that second shop and tryed to mimic again my problem. The woman said “no, no, no, fdslvnjfsvknjfovnfjnv jsn lfn sjlfsjdfn ldnf dljfn”. That’s what I understood… Maybe she doesn’t have the right material to fix this. I picked up my hammock and its bag and came back to her shop to explain that she could use the bag to fix the hammock. The bag of my hammock is made with the same material so it could work. But she said again “jsdlnsdj sdfjn jsdf dsfkn jsdk ndsjfn sdf ksddsk jd sjdsf jsdfk, no, no, no”. Ok… What can I do now? She has the sawing machine, she is fixing right now something for a client but doesn’t want to help me. I used the translation with my phone, nothing worked. She kept talking in Thai. I don’t understand you! Do you understand me? Nope… This didn’t work…

The shops started too close so I went to find a temple or some quiet place. I will come back tomorrow. Rah! I’m going to sleep on the ground again! Well, I still have my Thermarest short mattrees but it’s not that comfortable for sure! ‘Hope tomorrow will be better!

I found online a temple not far away from the city centre. I got nearby quickly. When I was ready to turn left towards the entrance of this temple I’ve seen a park on the right side with a nice shelter right next to a river. Monk wake up usually very early (like 4:30am) and some of them like praying too :-) Better sleeping in that park tonight :-)

I installed my stuff, attached my clothes line, set up my hammock to see again all those holes I made last night. How am I going to fix this…? I really hope I can… A guy popped up suddenly. He is my neighbour :-) We talked shortly, tried to exchange a bit more with body language and basic words. Then he left and I continued to do my stuff. Few minutes later, the same guy came back again with fruits, the one that looks like lychees called longan in Malaysia. They are one of my favourite here, thanks! This is a strange feeling that I’ve got so much bad luck yesterday and today, everybody is offering me some food. It’s like they know. We talked a bit more until some other members of his family joined us. They invited me to their home which is very near from here. Once there, the daughter used her phone to translate in english. Her younger daughter run to her room and came back with a translate book, certainly from her school. She was shy of course but tried to say some english words sometimes. The mother gave me some rice, and a fried egg, some water, a desert. I had my dinner before but I can always eat :-)

It’s very frustrating when we cannot talk normally to each other and ask only simple questions. They offered me to come in living room to watch TV but it did not seem to be the best idea. I was tired and she saw that because she said: “You. watch. TV. or. you. sleep?” I thanked everyone and came back to my shelter to spend the night. Wow! For the first time in two month, I’m cycling alone and the difference is huge! People react all differently when they meet someone alone. They want to help.