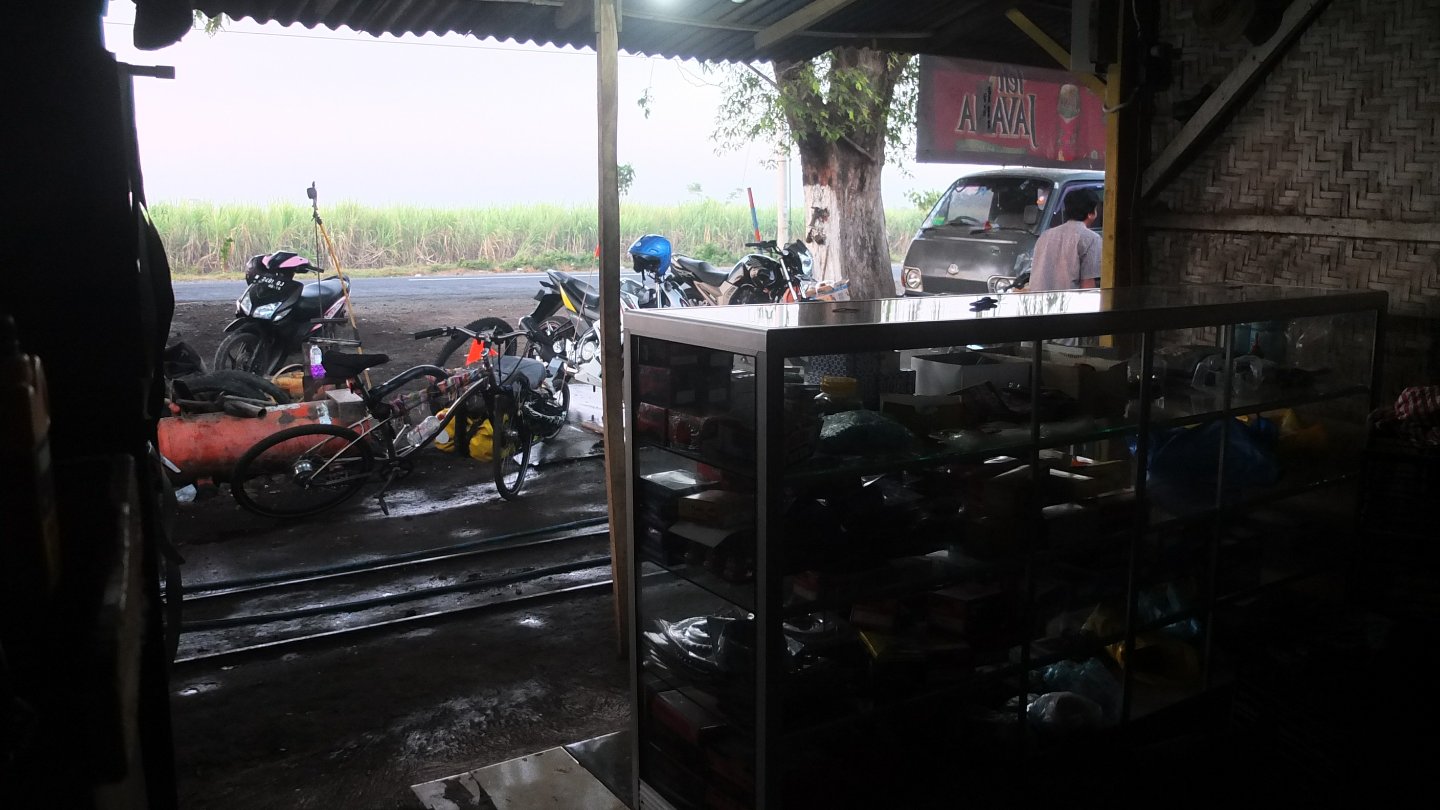 Last night was hard, hard on my back as I slept in a motorcycle workshop. I did not dare to use my mattress as some people sleep the same way like I just did but every night or at least very often. It was hard to get asleep at the beginning because of the constant traffic but after a while I got used to and released the pressure. The guys were very nice with me this morning and the manager of the next door warung wanted to offer me the breakfast. I must refused this offer after they did help me to find a safe place where to stay overnight. 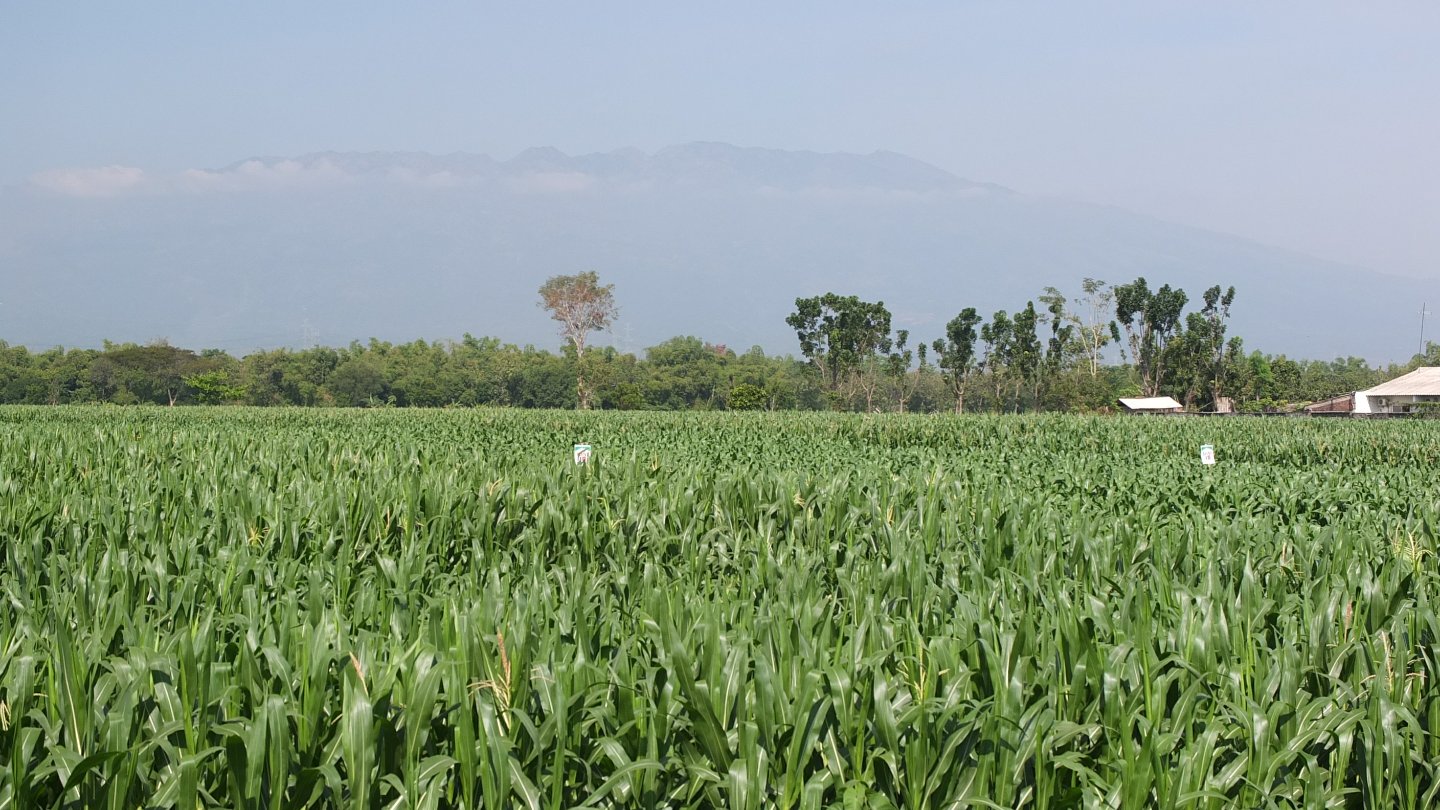 Here we go again, back on the wheels. I’m not sure yet and I’m wondering if I will try to get to Mount Bromo which is a point of interest I’ve saved on my map. The problem is this (the picture). This mount (gunung) looks pretty high! Actually I’ve been cycling on flat road nearly since Bali so I get a bit board, Some hills would be good! :-) 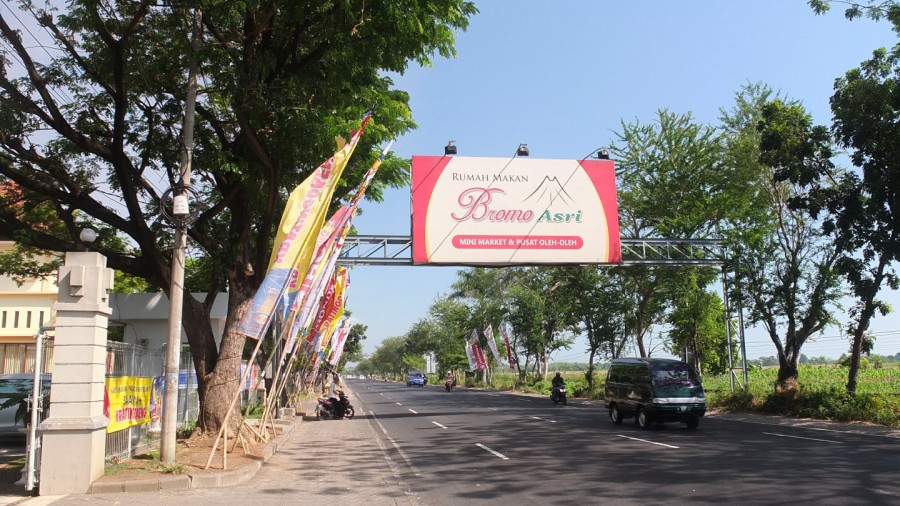 Bromo Asri. Seeing this sign rises my temptation to go there. And soon later, when I’ve stopped in a rest area to have a drink I met a nice Indonesian guy with who I’ve talk to for a while. I’ve asked him about Mount Bromo and he told me that is a very nice place to visit. It’s very toursity though but it’s nice. Hmm, I might do it. 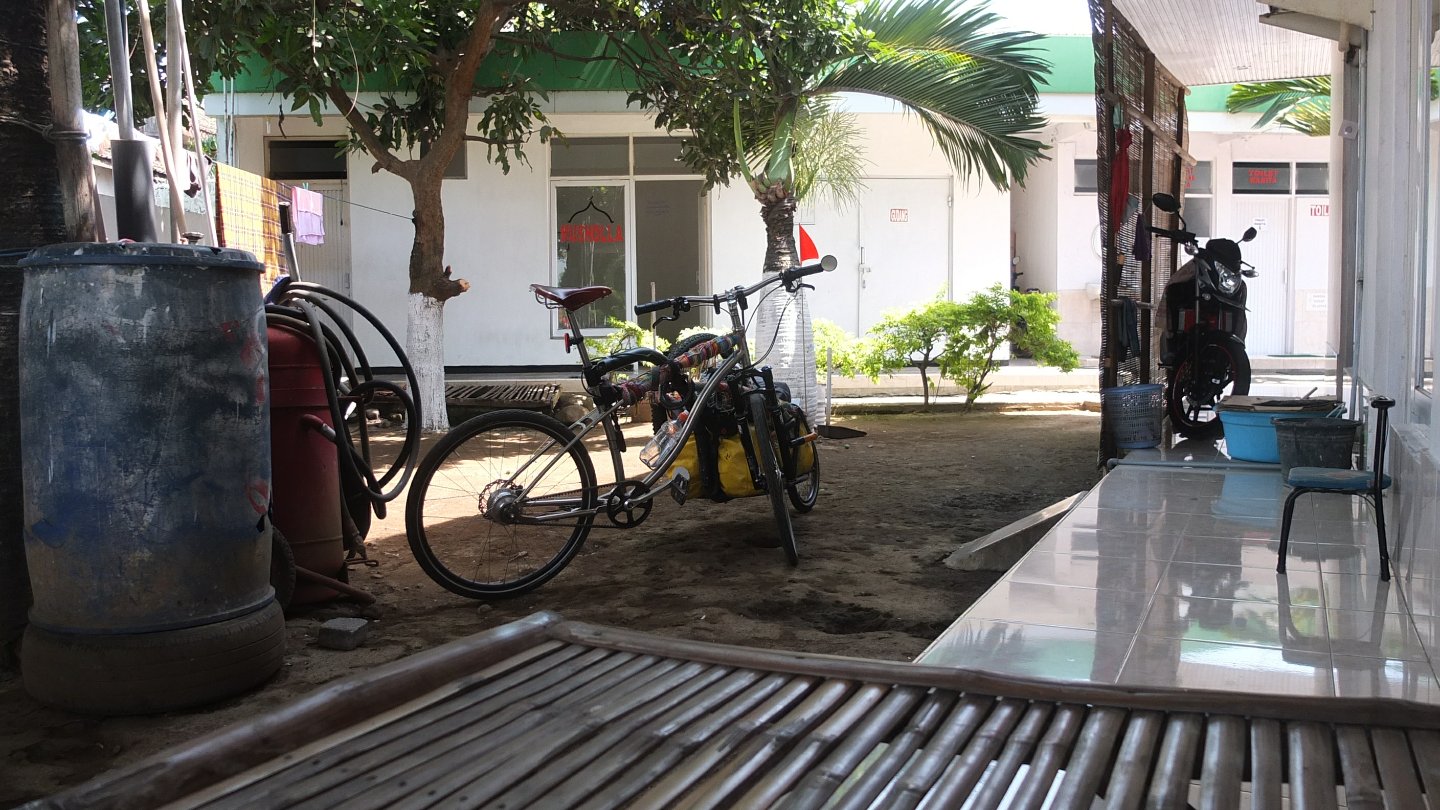 I’ve left the rest area and stopped maybe 10 minutes later with a bad stomach ache. I’ve bought some discount bottle of tea which was out of the fridge and drank the 3 bottles in a row. I think my body did not like it… Then I found this other rest area and bought a bottle a Coke to heal my stomach ache. The woman who managed the toilets place show me this spot behind the building where there is shade and a “bamboo bed”. it’s only 9:30am but very hot already. I will stay here for few hours I guess. 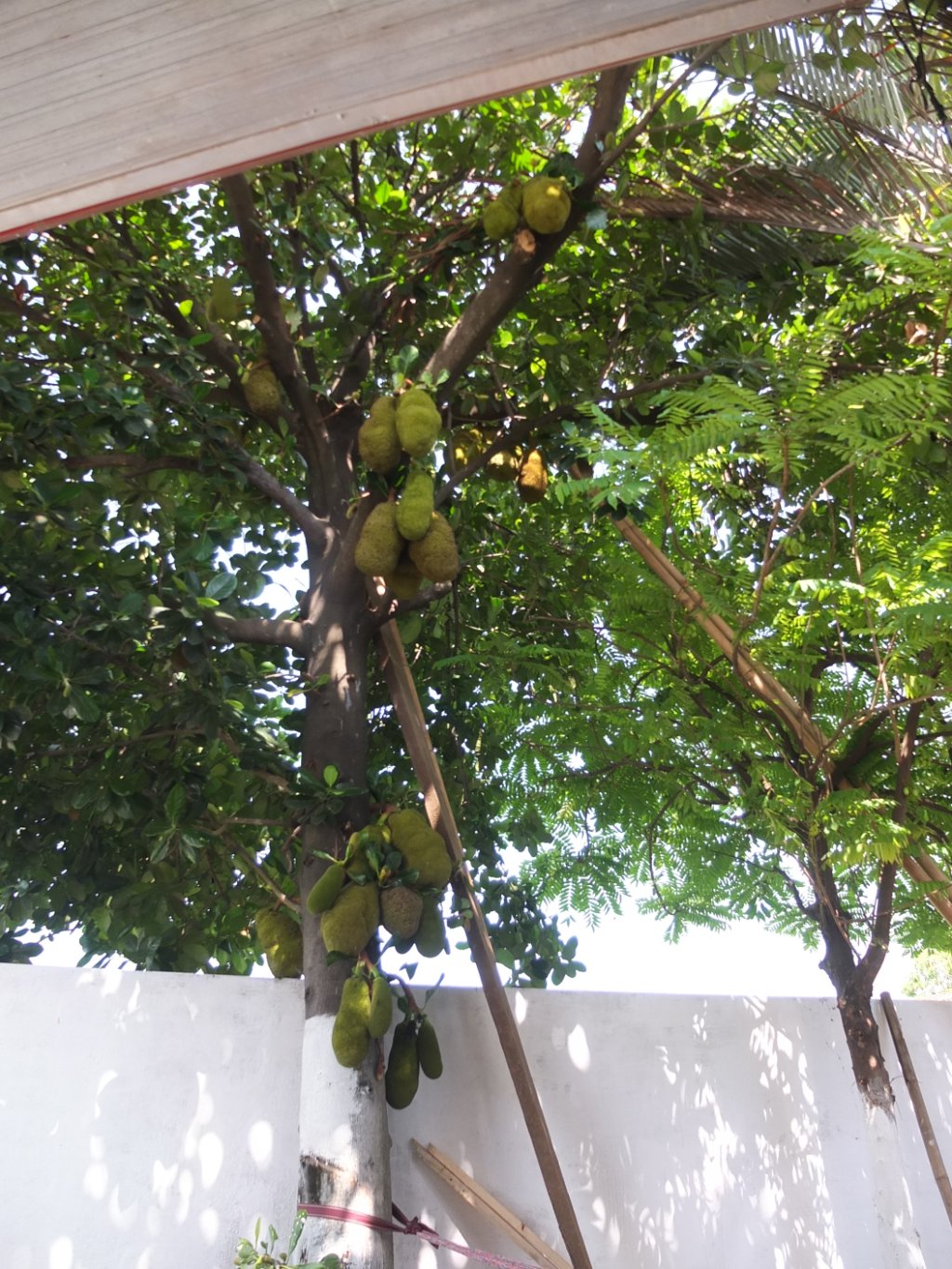 From where I am resting, I can see that amazing Jack fruit tree. 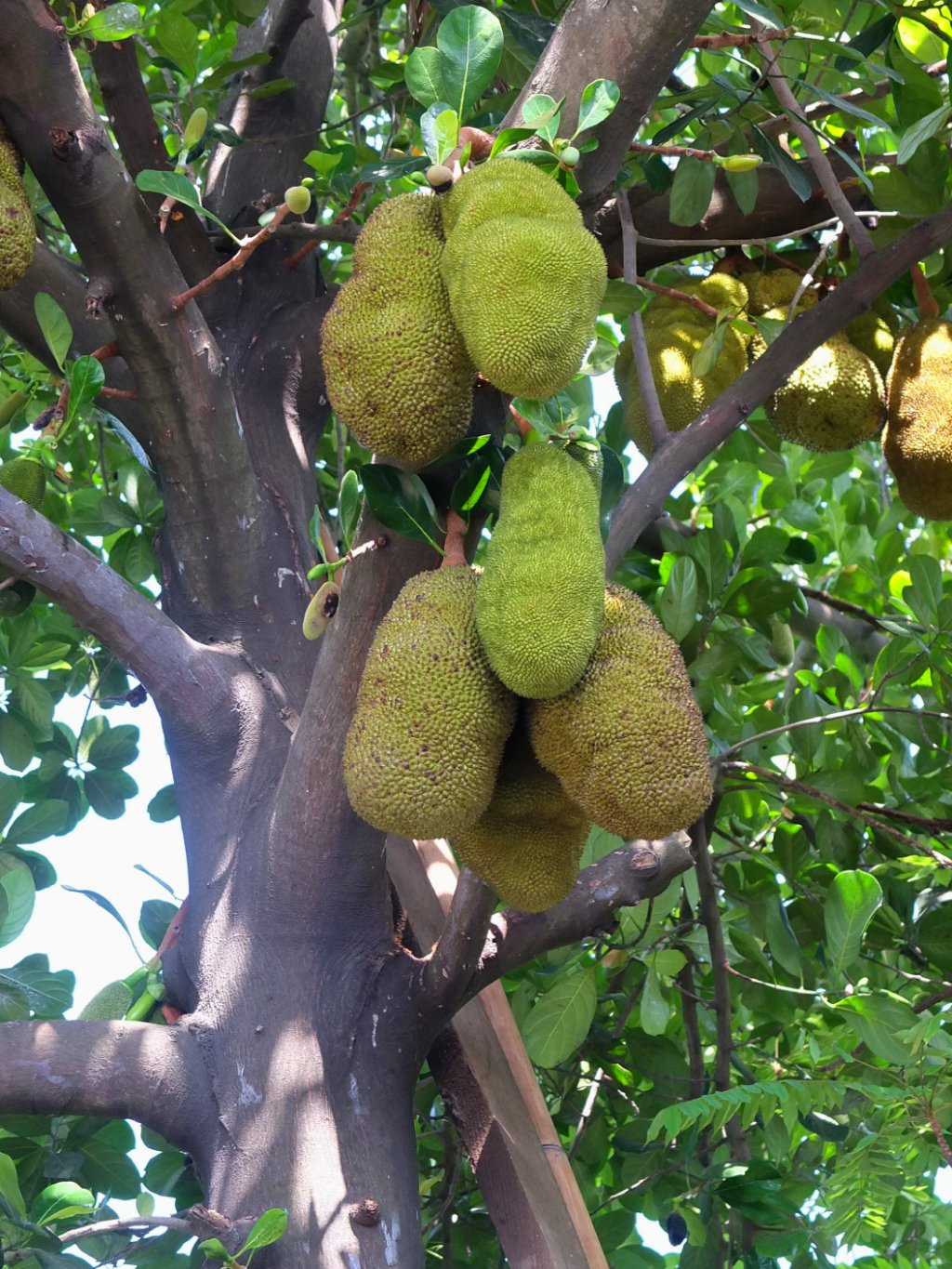 Look at the size of those fruits. Last time I’ve seen some was around Cairns (Australia) but I’ve never tried yet. 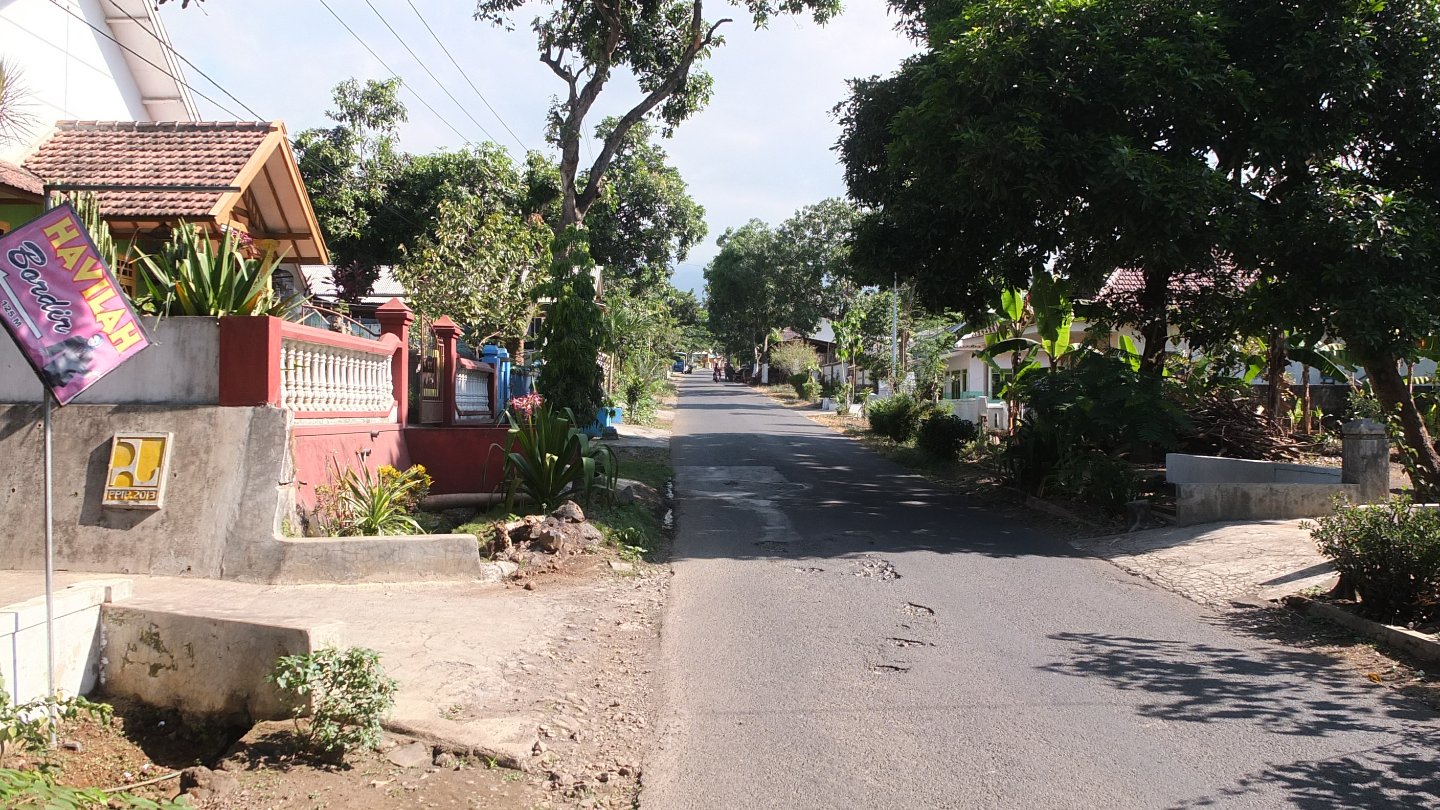 Here we go! It’s now around 1:30pm and I’ve decided to move on towards Mount Bromo. I know it’s going to be hard and will decide tonight if I will make it to the top or not. 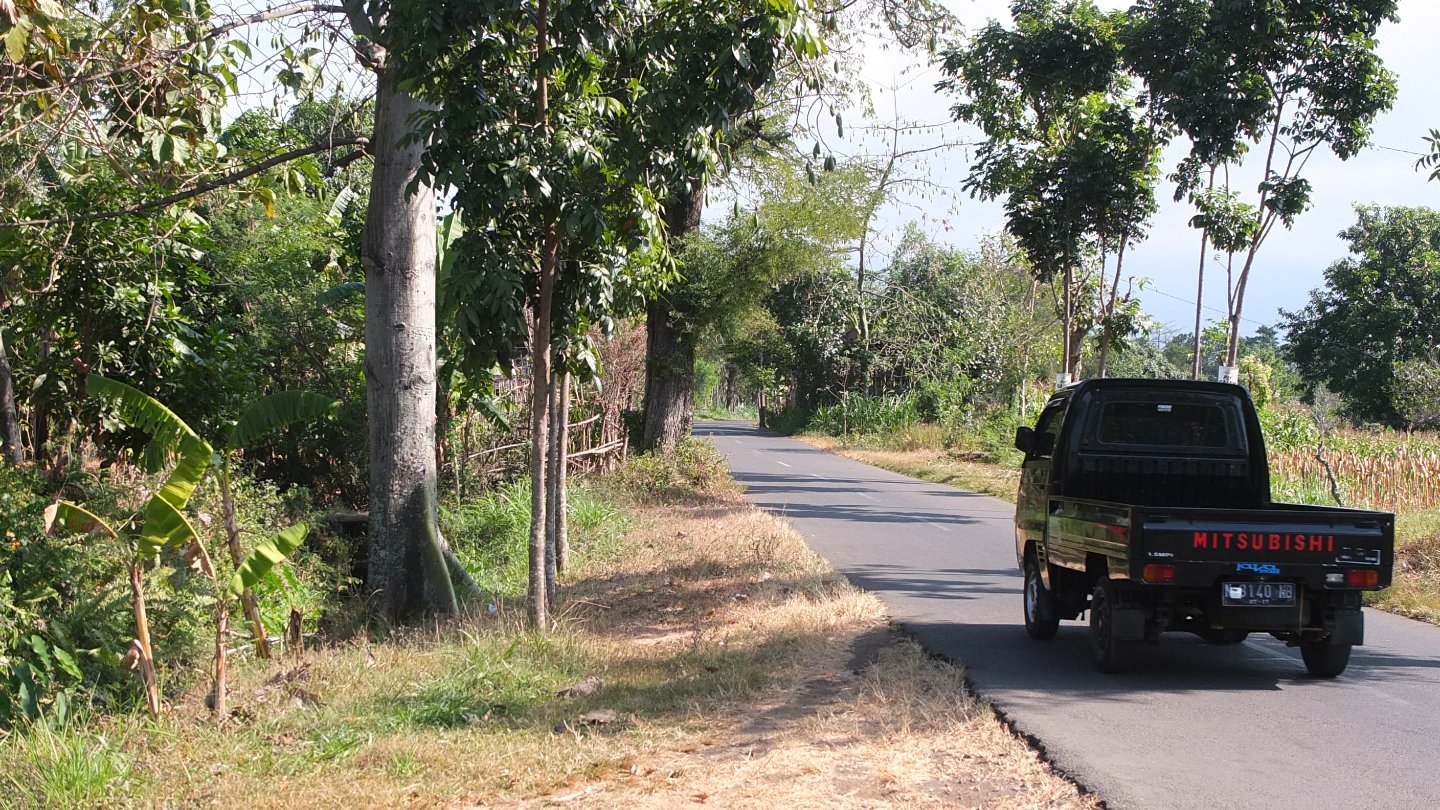 At least, if I know I can’t do it, I could ask some help to a mini-truck like this one. I would put my bike and trailer in it and reach the top this way. Nooo, it would be cheating. I prefer to suffer but be proud of doing it myself! ;-) 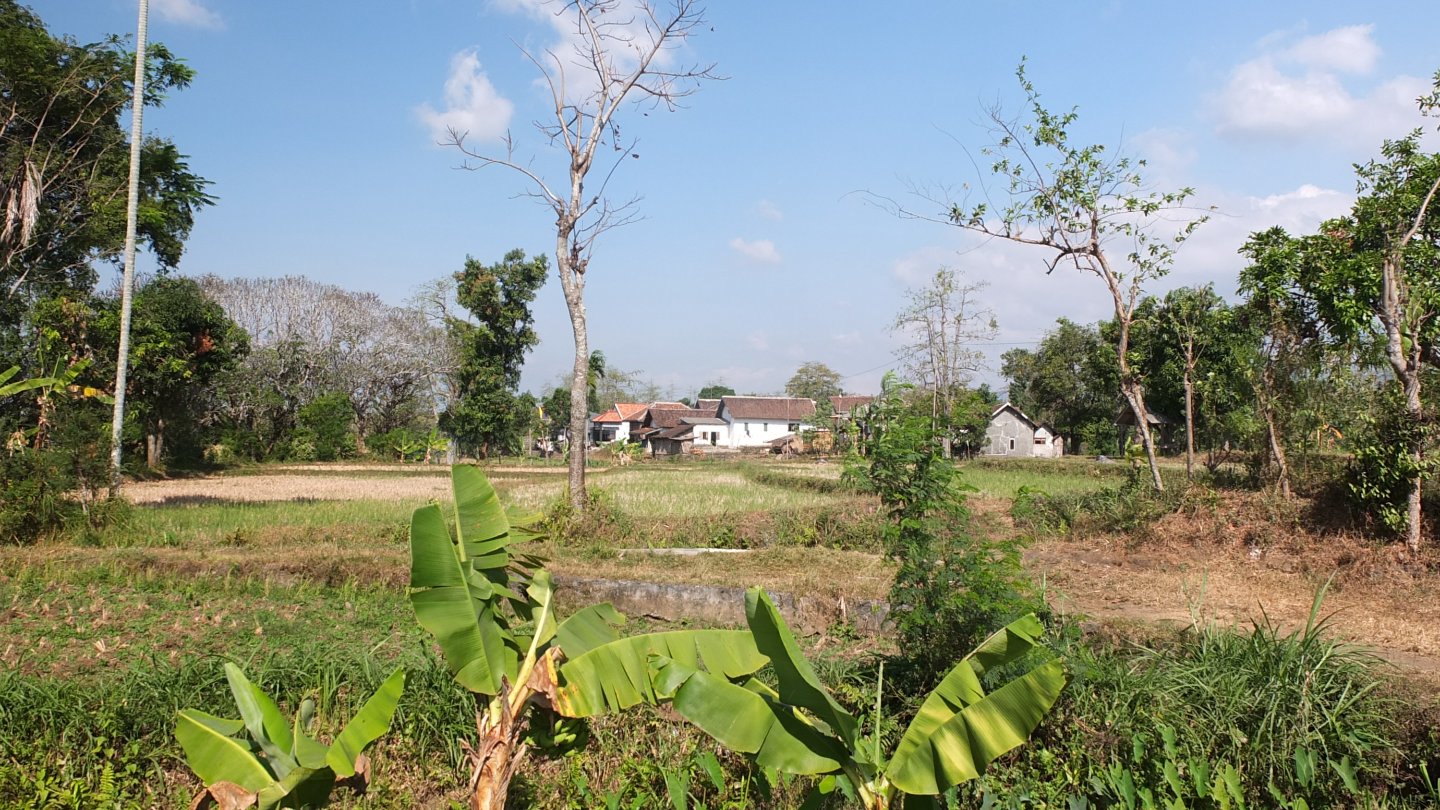 Until now the road is not too bad, I mean not impossible to ride regards to the steepness. There is some tiny villages along the road which confort me in the fact that  Icould eventually ask for a “taxi-truck”. 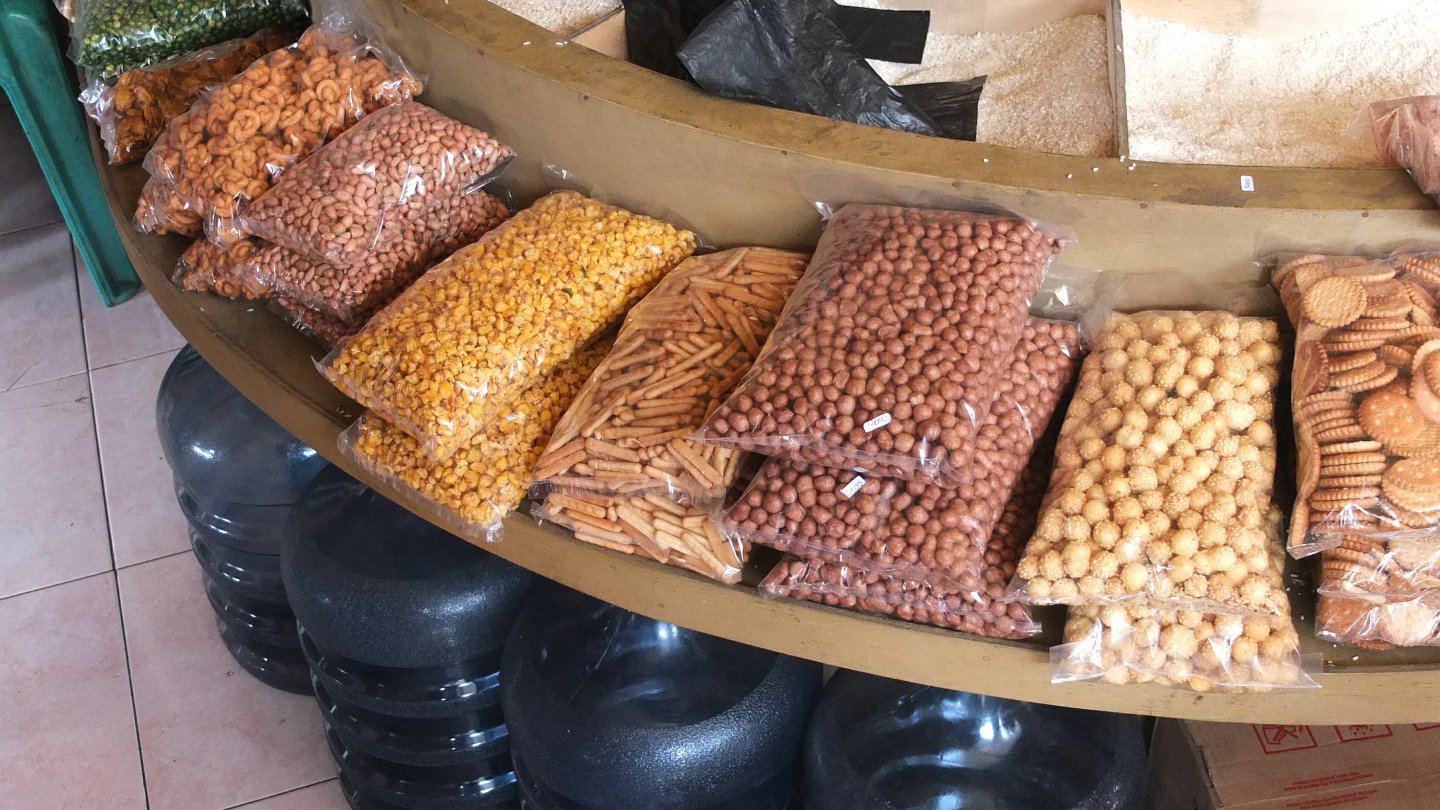 I’m having a break in a village along the road. Some of the shops like this on have lots o thing I’ve got no idea what it is but it’s looks colorful ;-) 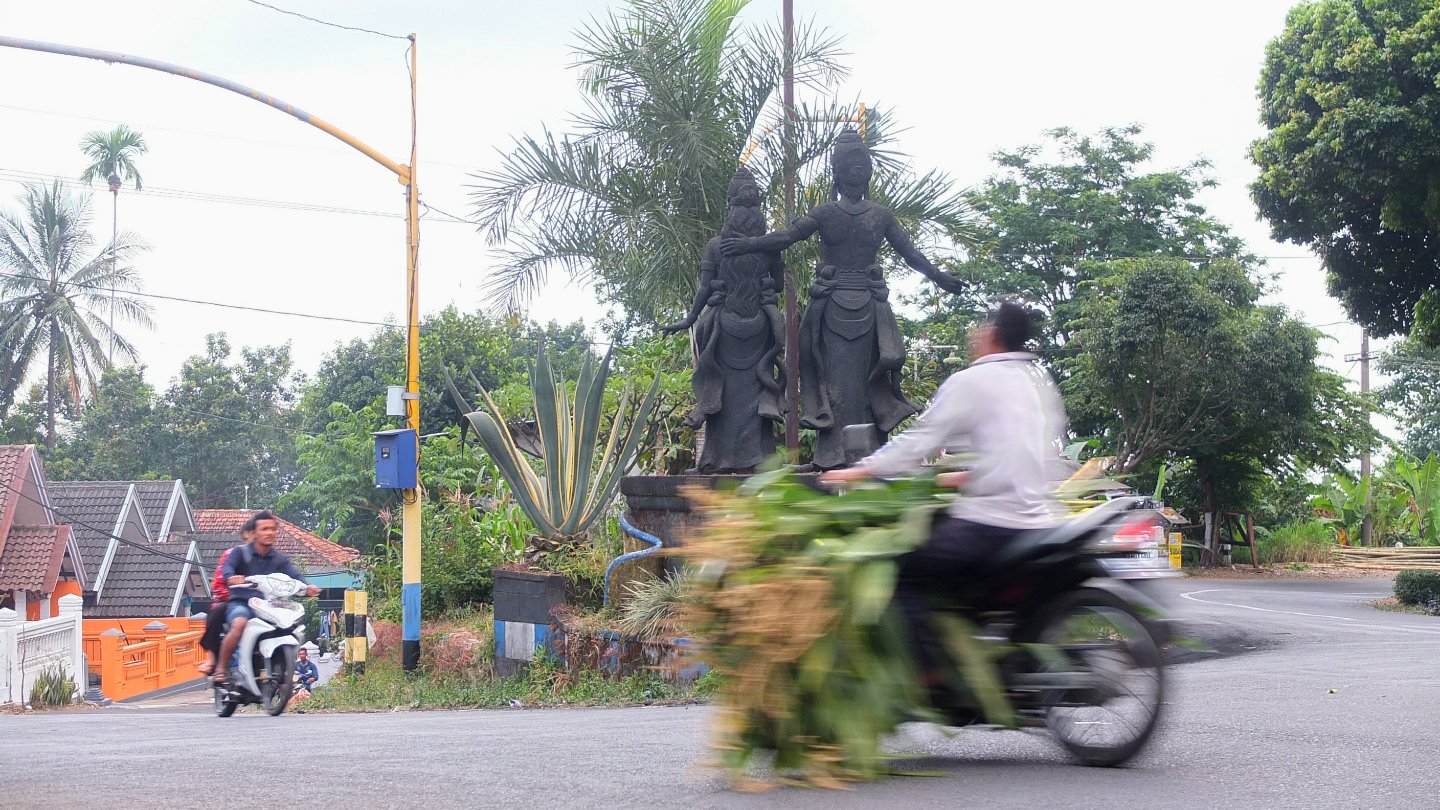 I’ve arrived to a major checkpoint. From here I could go back down to the coast by taking the road on the right. Or, I can continue climbing… I don’t know… I’ll have a break and will think about it. 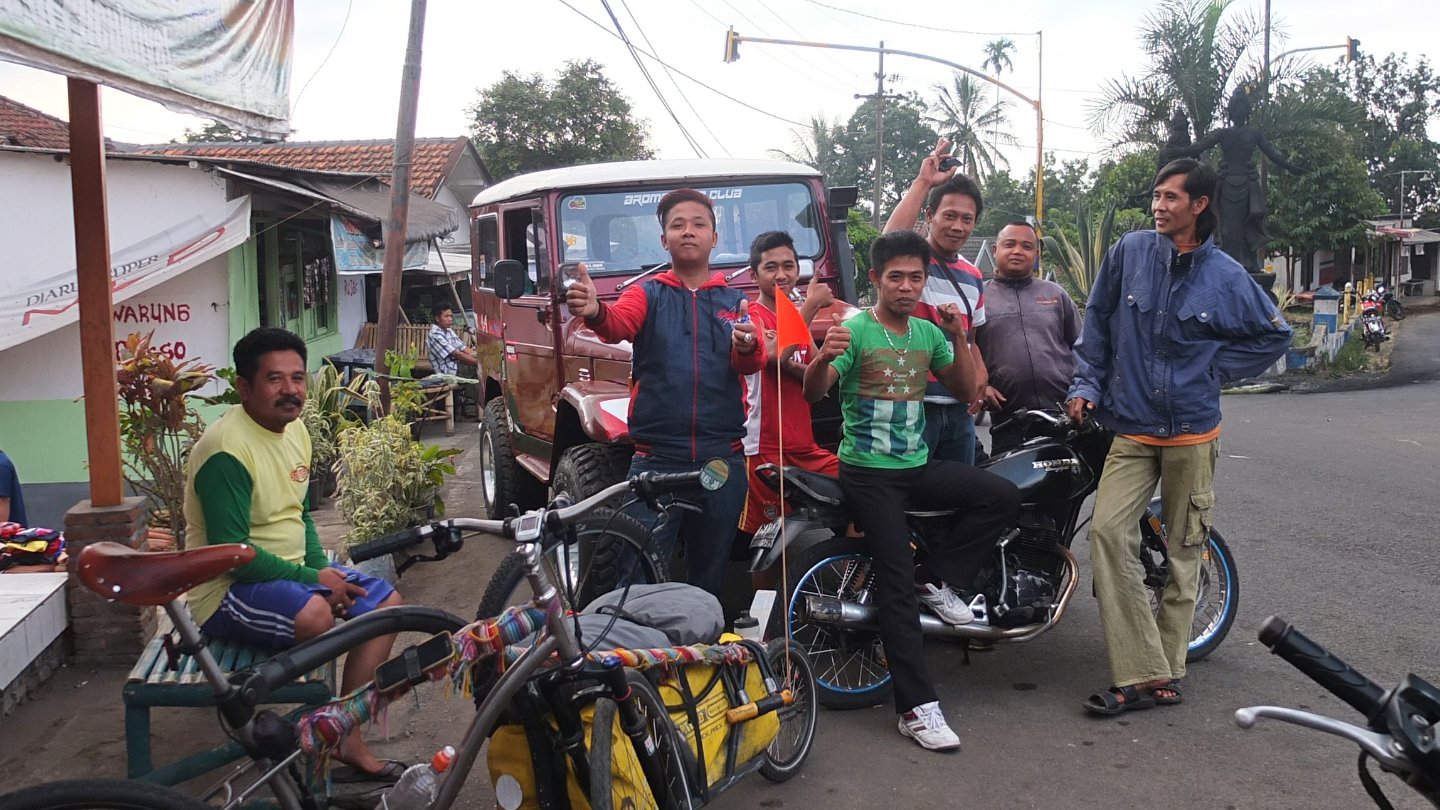 As soon as I stopped, a couple a guys came to have a look to my bike. Then  two more, then some motorcyclists stopped and finally we tried to communicate together. Someone bought some snacks and offer me some. Another guy bought a bottle of Javanese whisky that he mixed with water and we shared it. It was tasty but I did not drink a lot as I wanted to cycle a bit further today. Very nice people as always. It always reminds me what Balinese told me about Java and Sumatra people: “be careful there”. Until now I must be very lucky because I feel completely safe :-)

I’ve continued cycling for another hour. The road was getting steeper and steeper and I had to walk and push my bike many times. But I don’t mind, I will push as often as I need until I get there because now, I can’t come back. I will do it!

The other tricky part here is that it’s difficult to find a quiet spot where to set up my hammock. I’m sweating a lot so I don’t really want to sleep this way. I’ve started looking for a homestay until a guy who standed up front of a hotel asked me if I needed a room. I said no, I was looking for something cheaper, max 150.000IRD (15$AUD) for the night. That was a kind a mistake to say my maximum price. Straight away he told me that he had a homestay up the road and he pushed me there when I was pedalling. If I don’t find any “taxi-truck” I could still ask him to push me up to Bromo haha :-)

Few minutes later, we reached the homestay, I gave him the money and he left. I did not met any other person in the house and then thought: “maybe I’ve paid him and the owner of the house is going to ask me the same amount again! second mistake… I put my bags inside the room as recommended the “push guy” and when I was ready to go out for dinner a young guy came to me as asked me if I was ready for dinner. In fact, this homestay provided food. Wow! I’ve talked to the guy about the fact that I’ve paid already for the room. He was not surprised and said that everything was ok. Ok, I’m ok too then :-) Tomorrow morning I will start fresh! Fresh clean but maybe not freshly awake as it is the last day of the Ramadan and the same guys are going to pray at 5am or something. Good night!