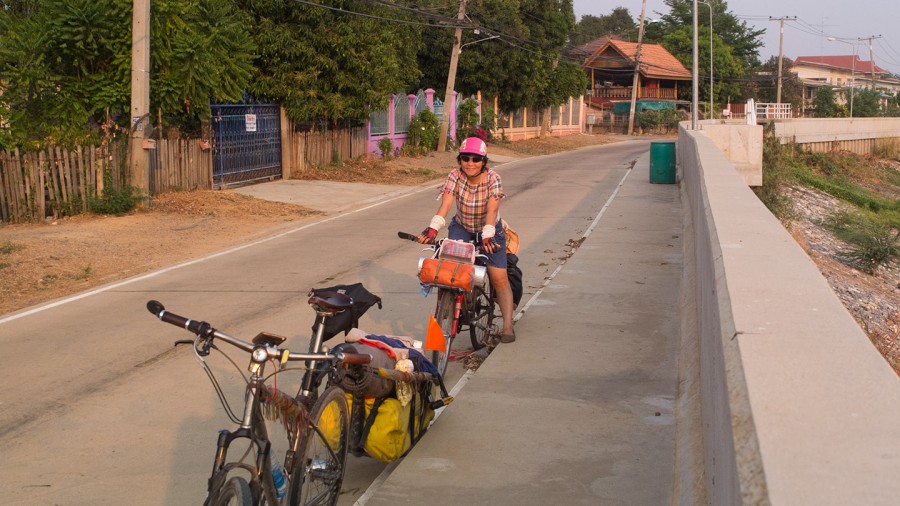 Today we haven’t ride much but visit some more places. We met many nice people today and enjoy the ride the Chao Phraya river during the second part of the day. Tonight we won’t sleep in a temple. We almost did it but finally we ended in a restaurant. No plan is the best :-) 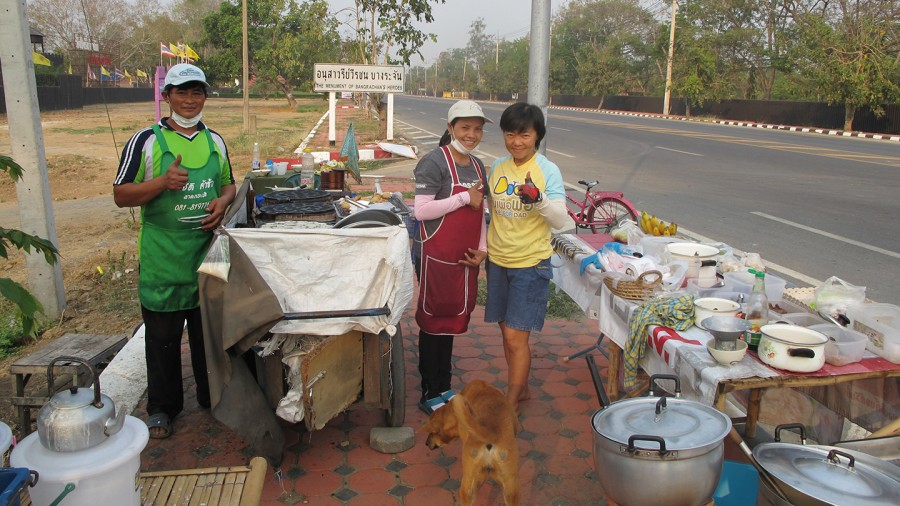 This morning we did not have time to cycle very far. We stopped few metres out the temple to check where we were going. At that same time, the woman with the red apron popped up front of us. “Can I take a picture?” She said that in Thai but I’m nearly fluent now so I understood haha. I’m joking, she said “bla bla bla photo?”. Then, she invited us to eat at her place and we accepted. She is a good commercial hey? 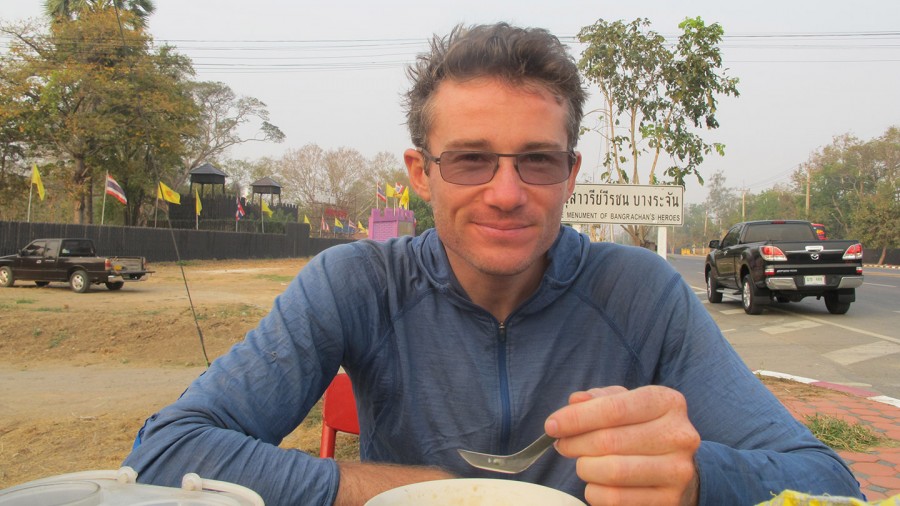 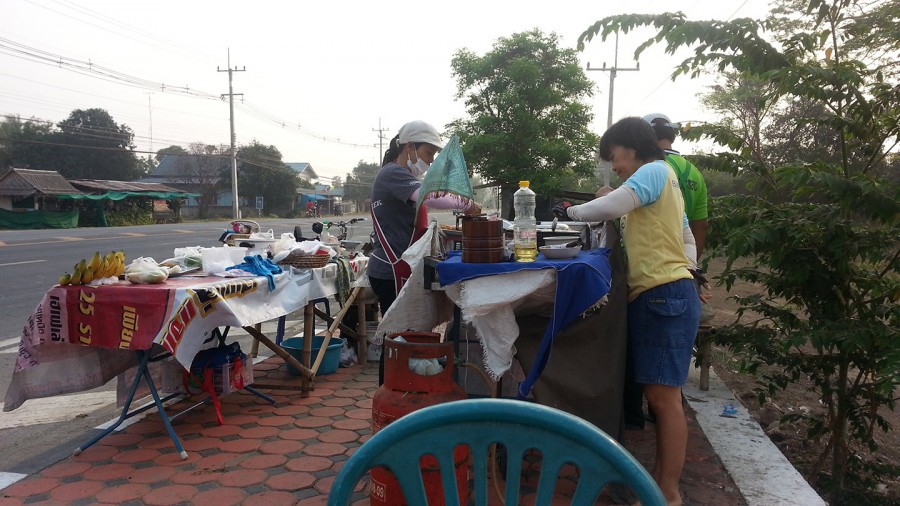 During breakfast Pita participate to the cooking.

She is a cyclist too when she is not working here. Every weekend she goes cycling with a group so of course the connection was easy :-) 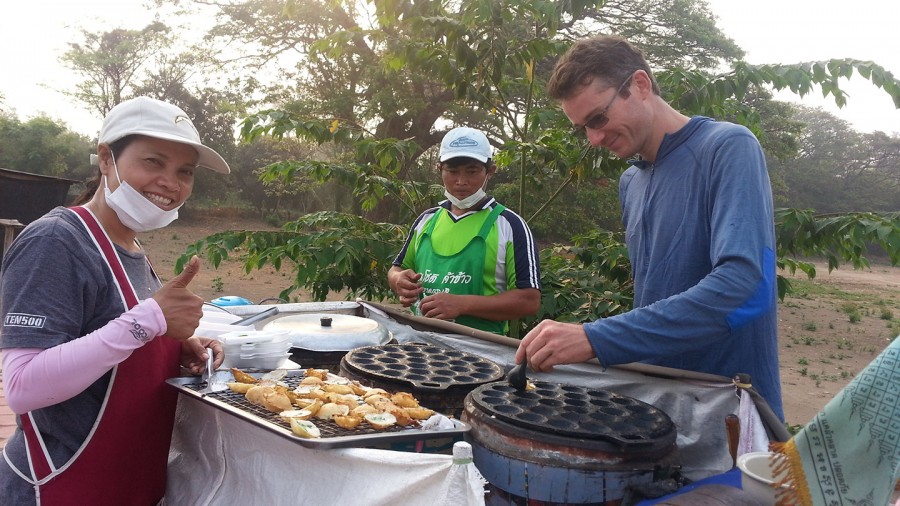 Ok, I will do the last one to try. 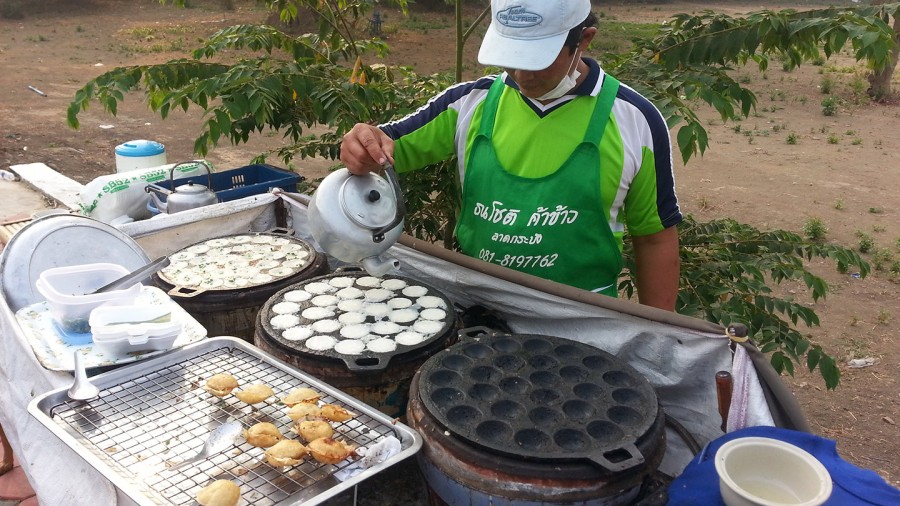 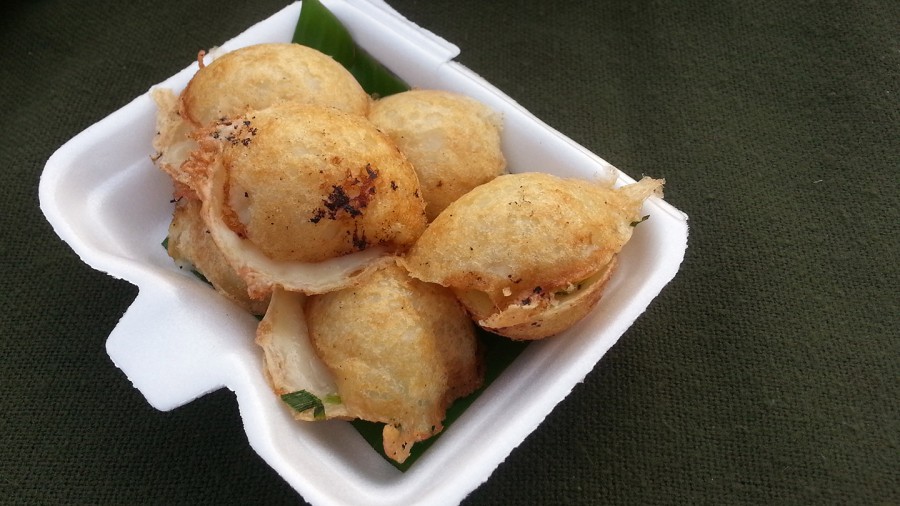 These are like mini crepes or mini something. It called Khanom Krok. It has the texture of a poached egg and it’s slightly sweet. I think there is coconut milk inside. Very nice. 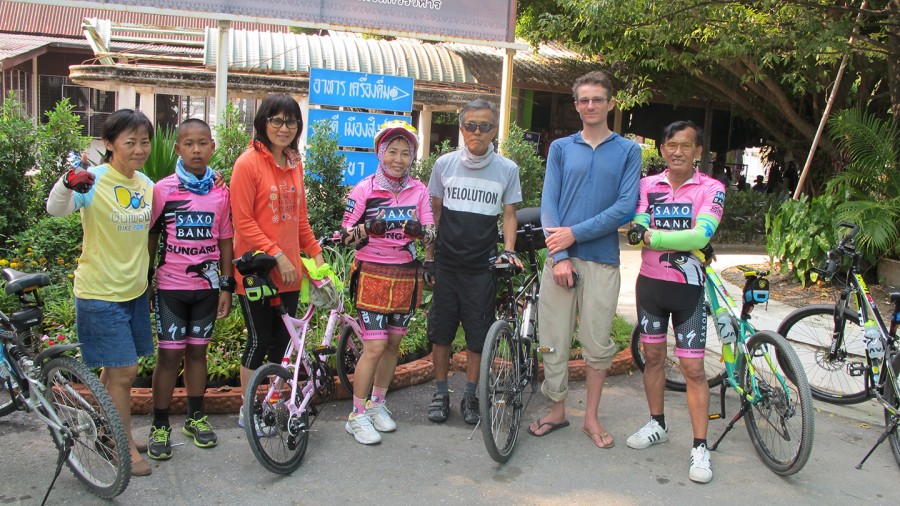 Later on, we stopped at a temple called Wat Pranon Jaksi for the first visit of the day. There, we met a group of cyclists. They are friends from school and organise tour together. Cycling is something very trendy today in Thailand. In 2011 the prince organised 2 events:”Bike for Mum” for the Queen’s Birthday (12th of August) and “Bike for dad” for the King’s birthday (5th of December). Since then, many people keep wearing that t-shirt when they are cycling. 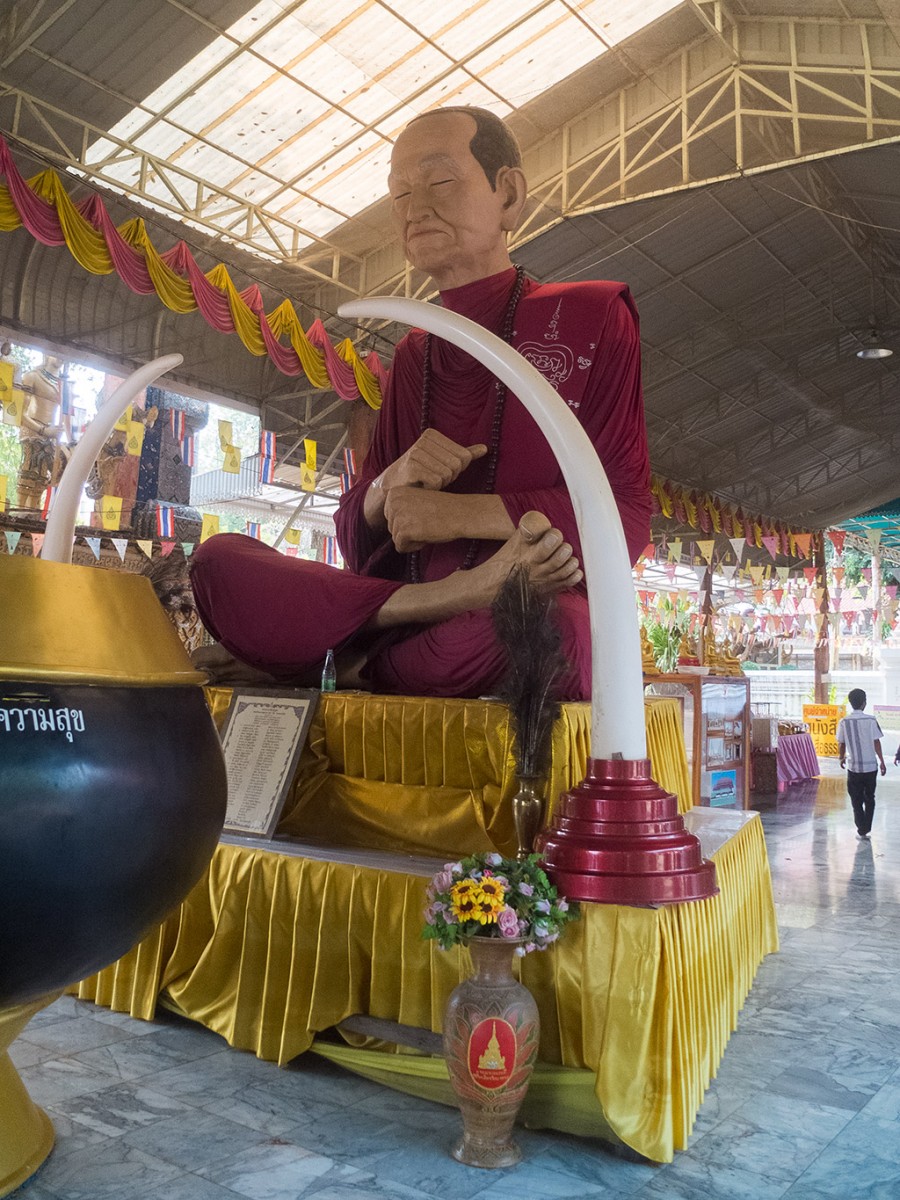 This statue is very well done made! He must be the chef of this temple. 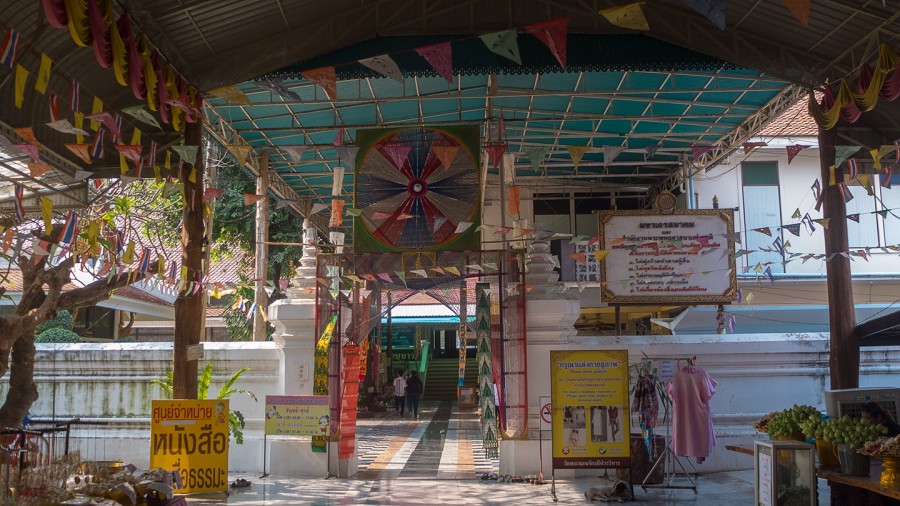 The entrance of the temple. 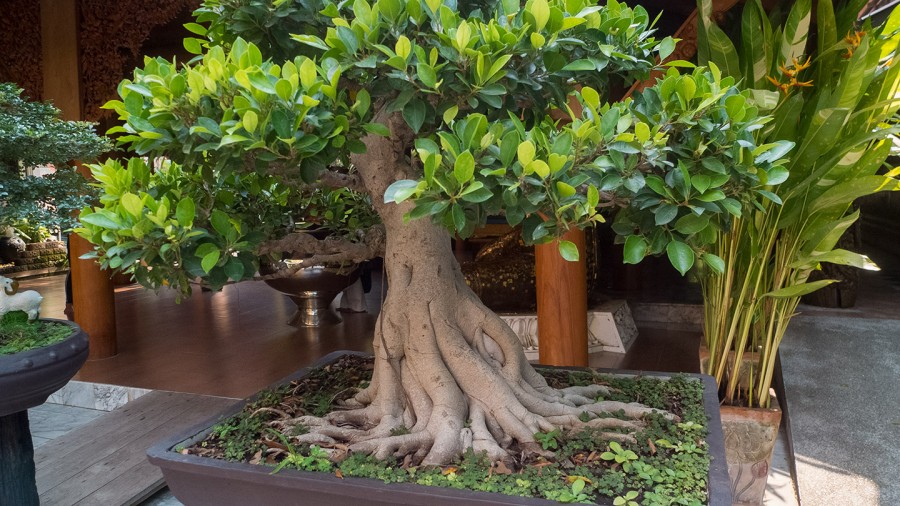 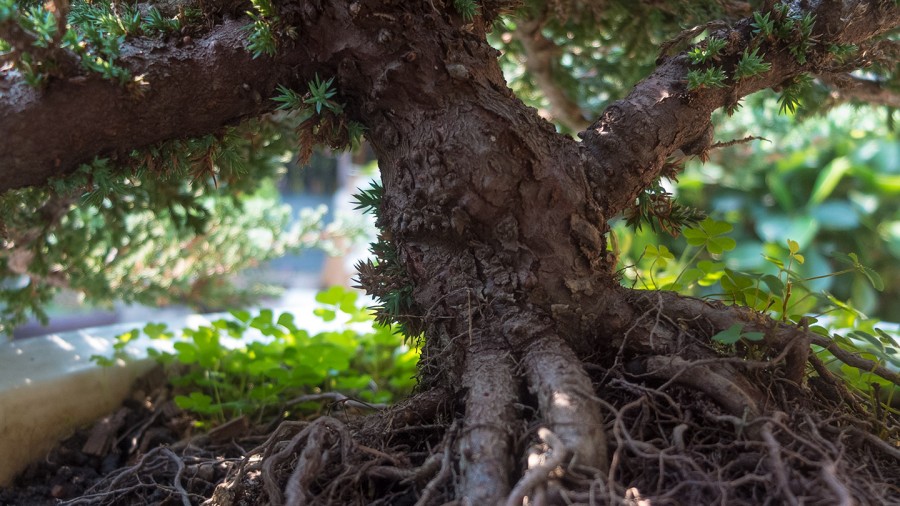 This one is nice too. 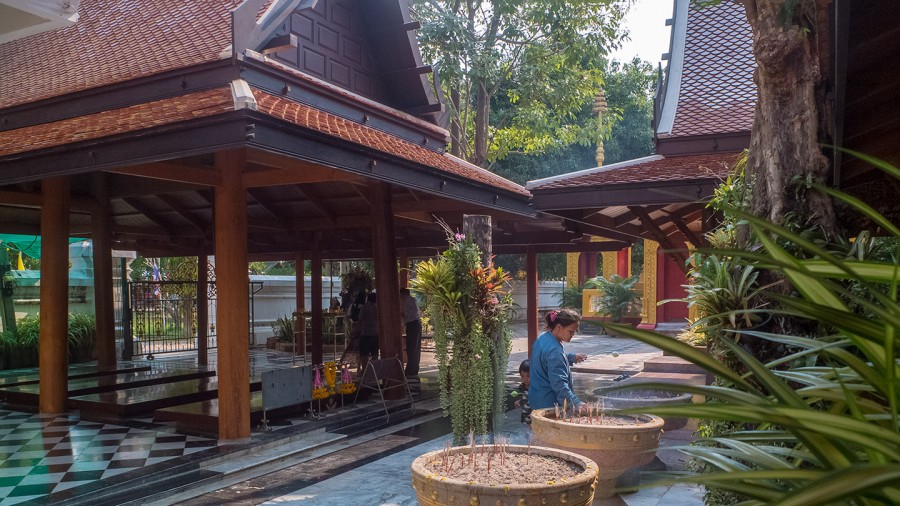 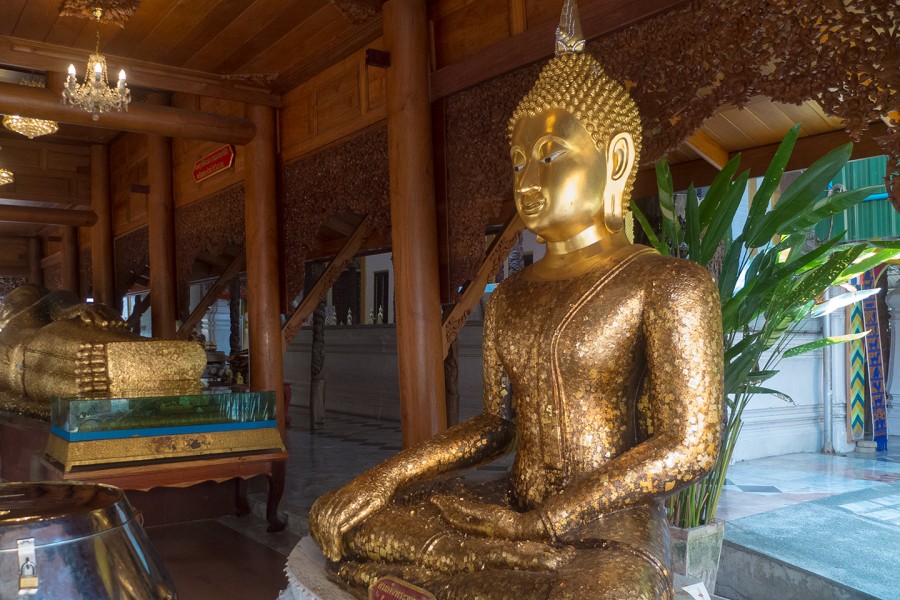 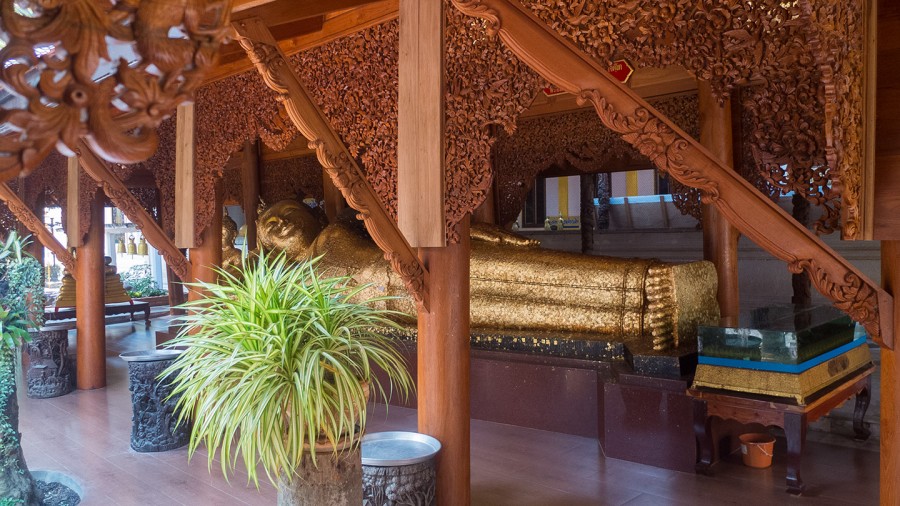 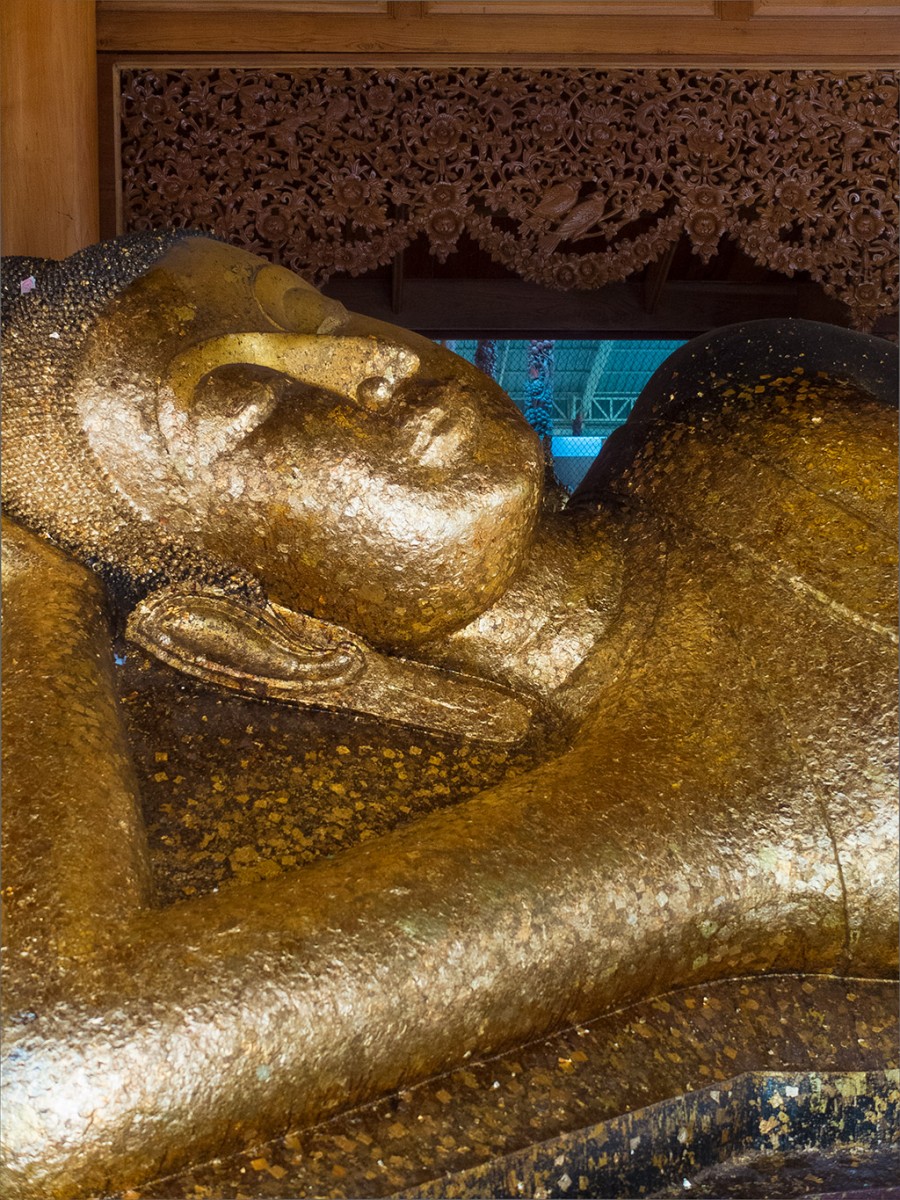 This Buddha is nearly completely recovered with gold leaves applied by the visitors. Normally, they are not covered that much. This one must be special or famous. 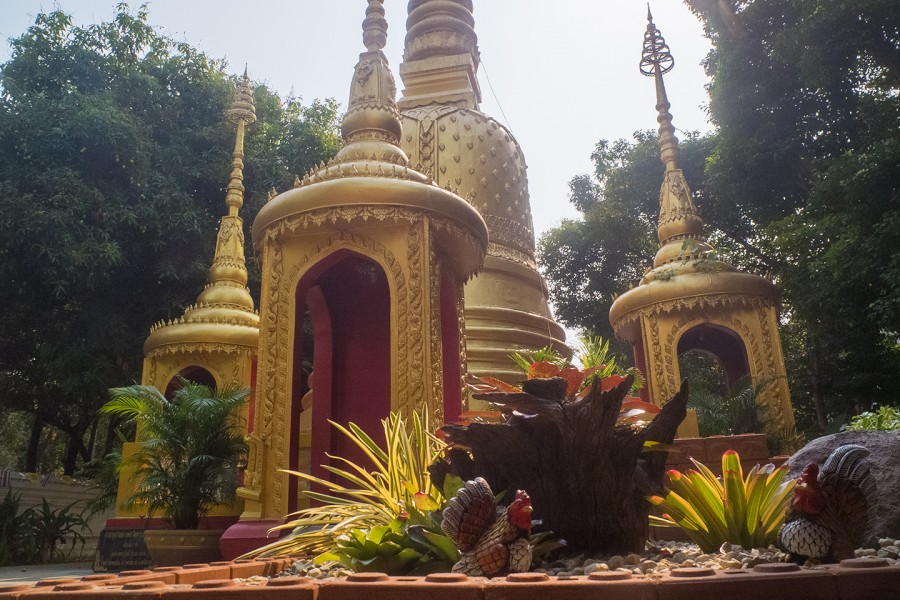 Pita stayed outside to keep a look on the bicycles. Someone told us to do so. But here I am in a place where nothing is written in english. So, ok, that’s nice but I’ve got no idea what it represents… 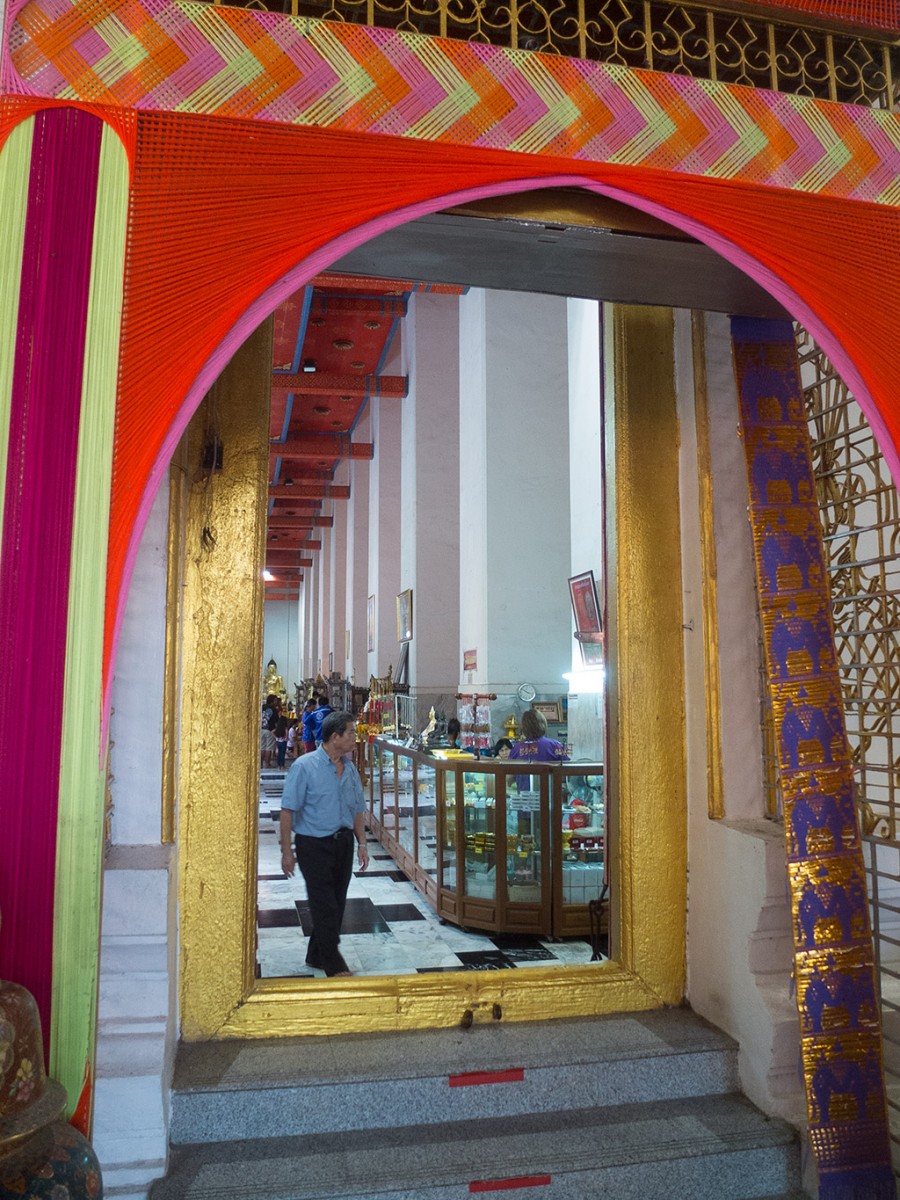 I got out when I thought I’ve finished the visit. We checked the bicycles again and decided to come together inside. Fortunately we did because I missed the most important part, this GIANT Buddha! Can you see it? Of course not, it’s behind those big poles. 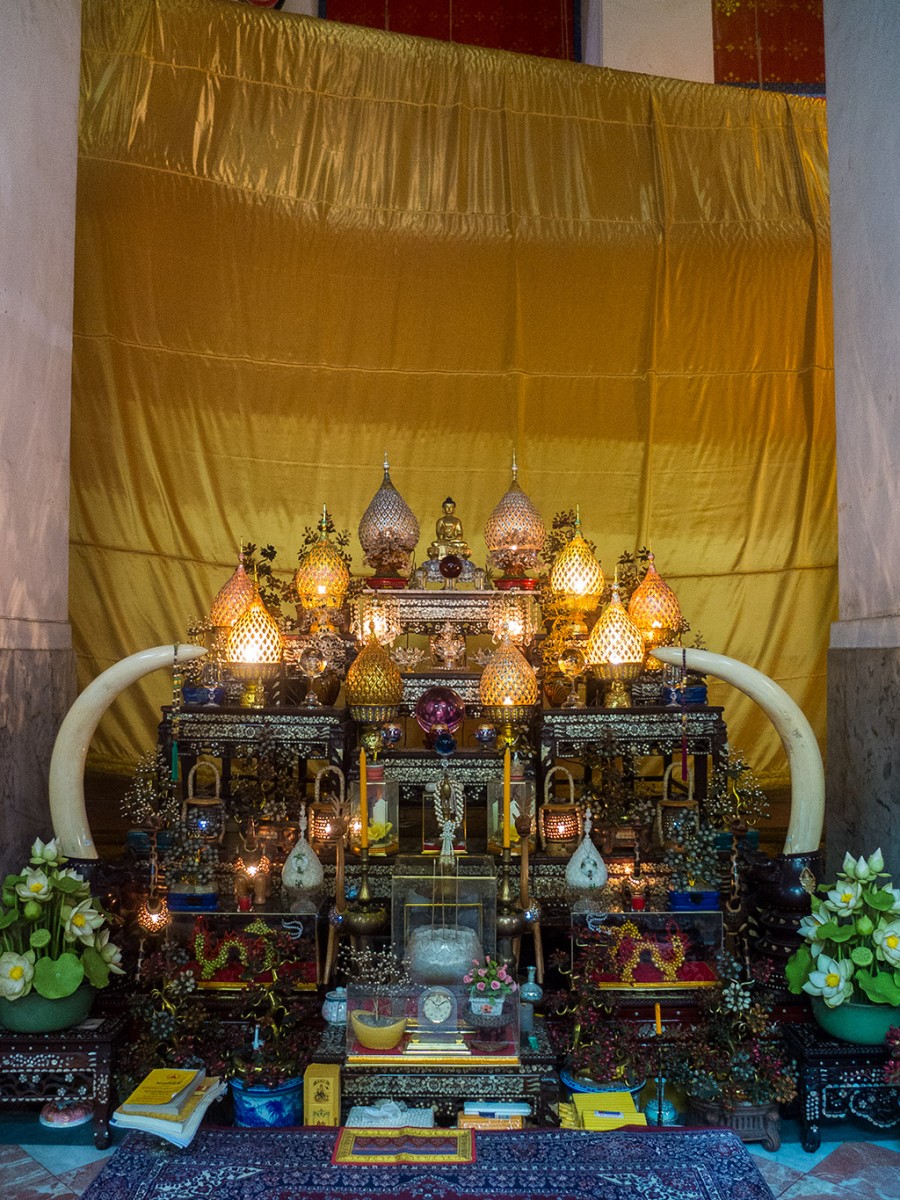 That’s one part of him. 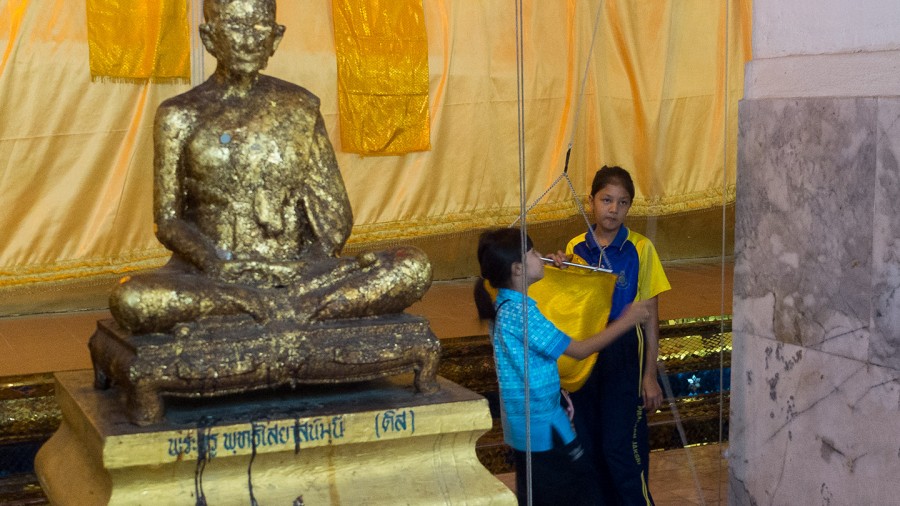 This kids are doing something I’ve never seen before. 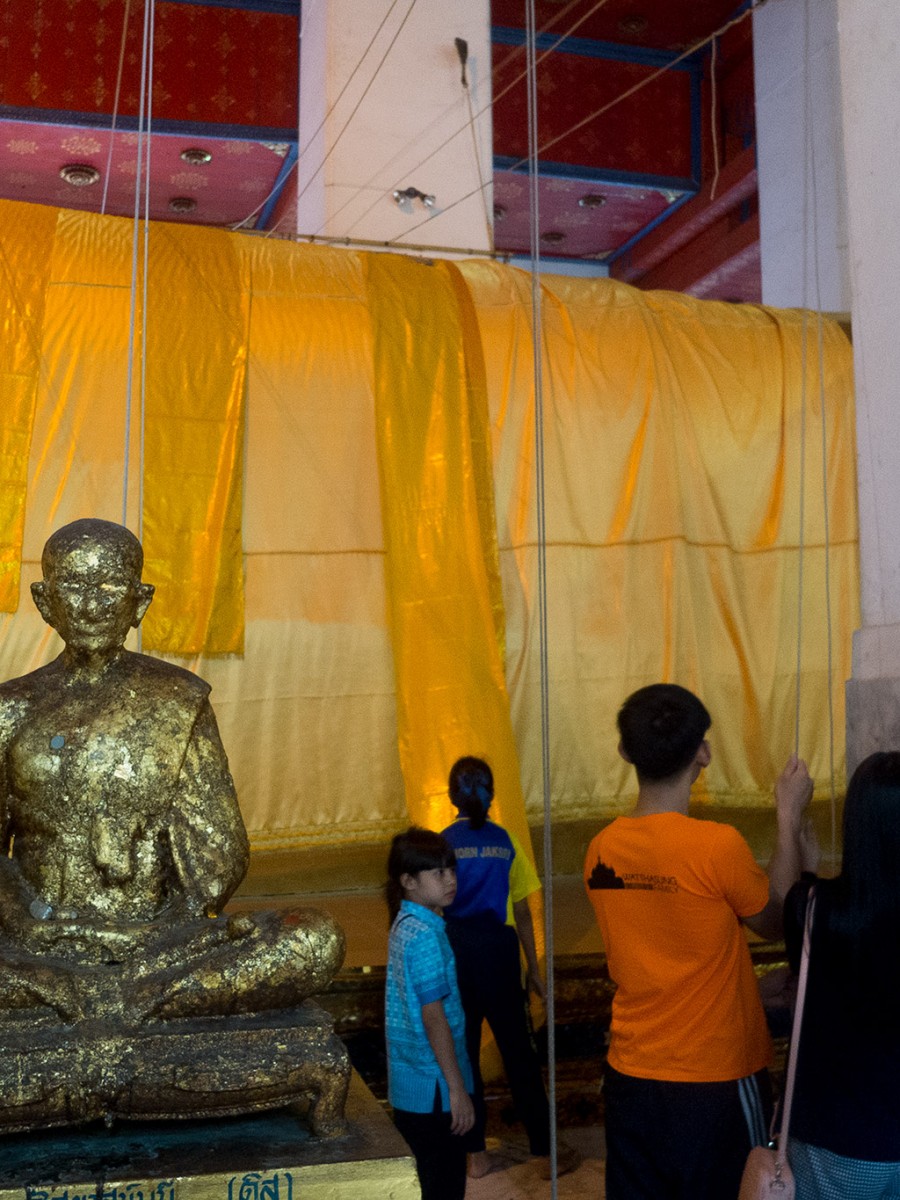 The same way as people offer food to the monks, here they symbolically offer clothes to Buddha. That’s the way for the temple to make some money too. 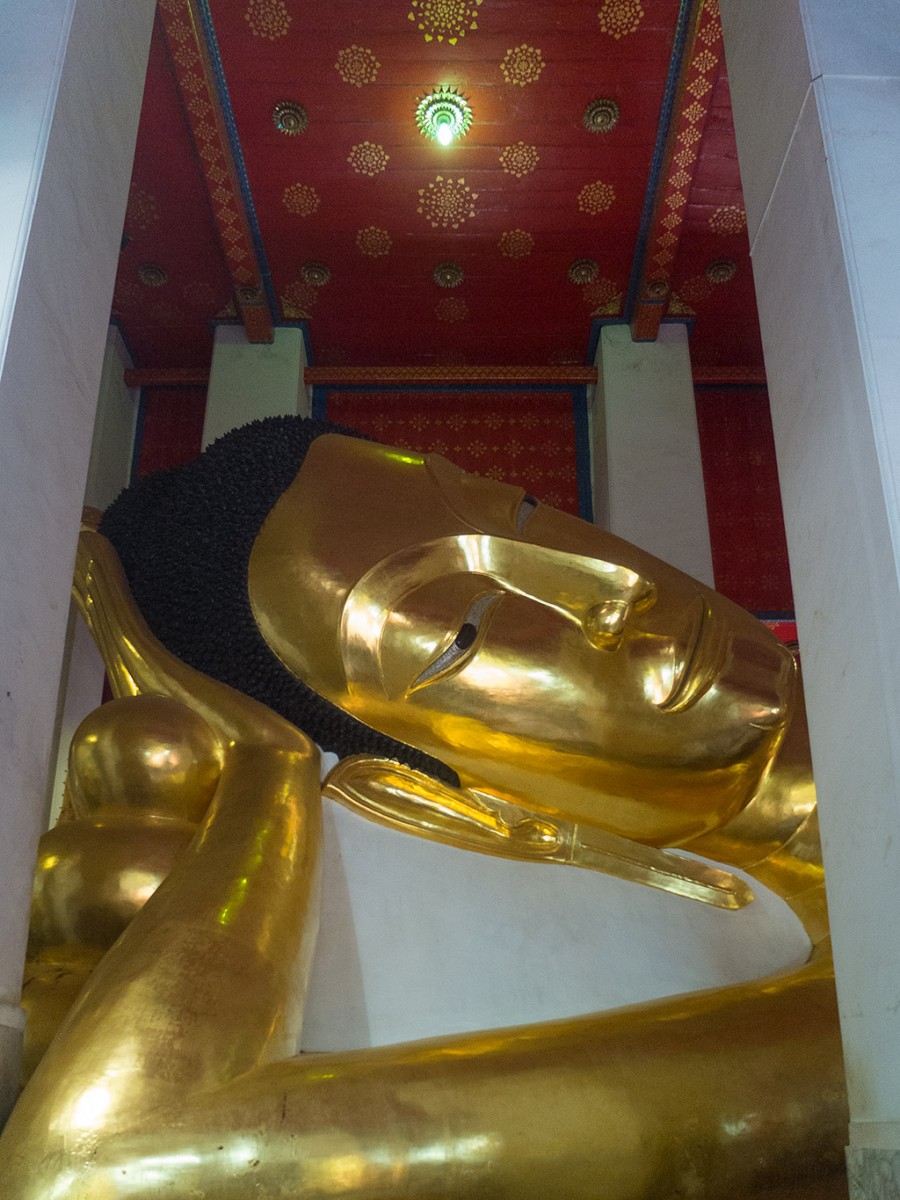 Any view doesn’t really help because of the poles but it gives you a taste of his hugeness. 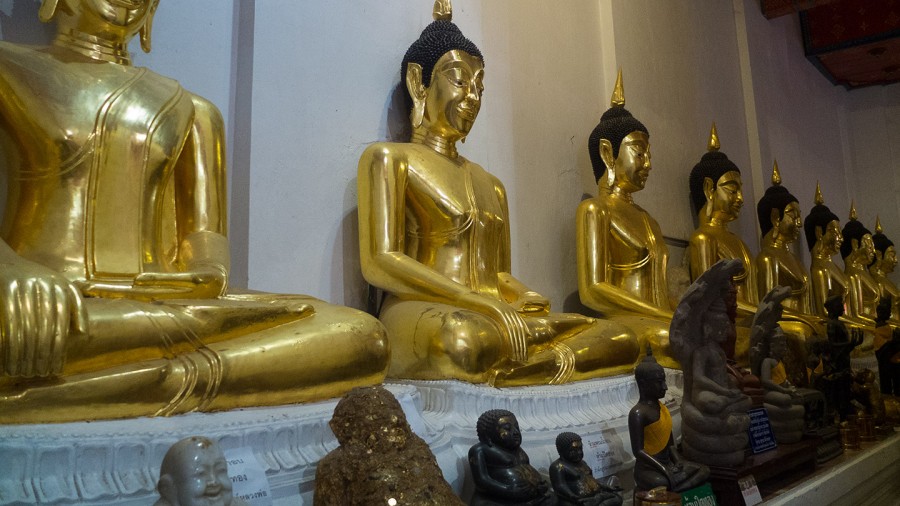 Having a look inside the temple. 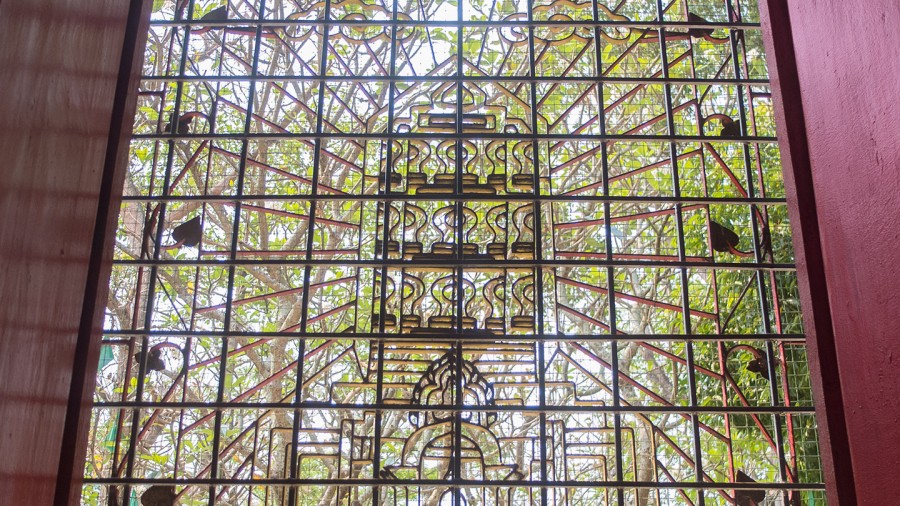 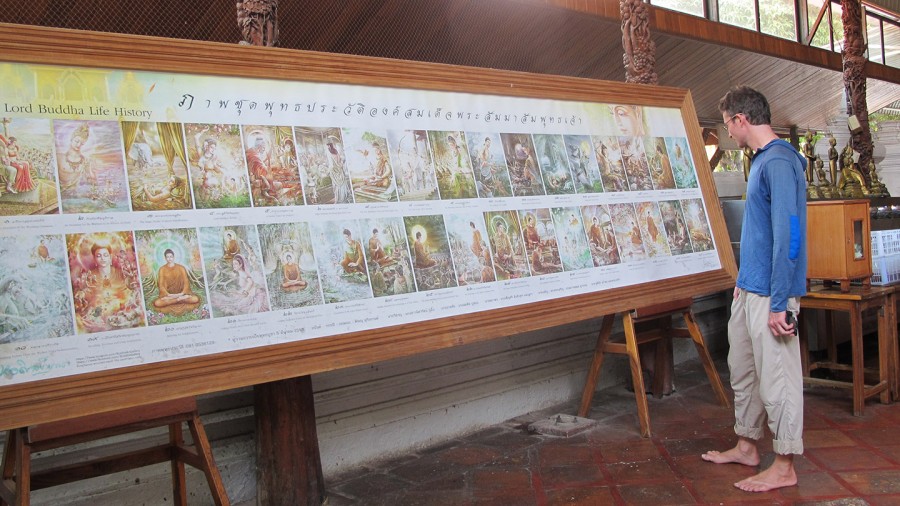 The Buddha story again. There is more details here but the images have faded out unfortunately. 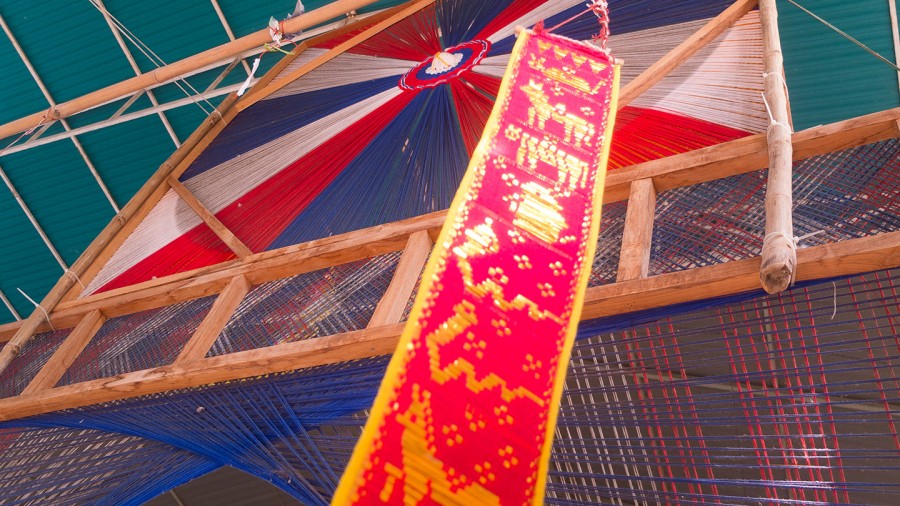 The visit touches its end. 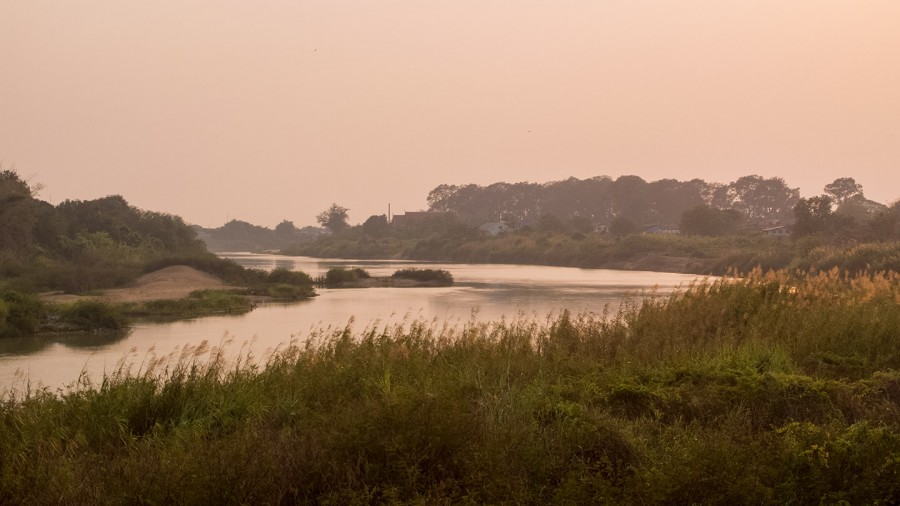 We have spent the next hot hours somewhere under the shade and now we are back on the road again. 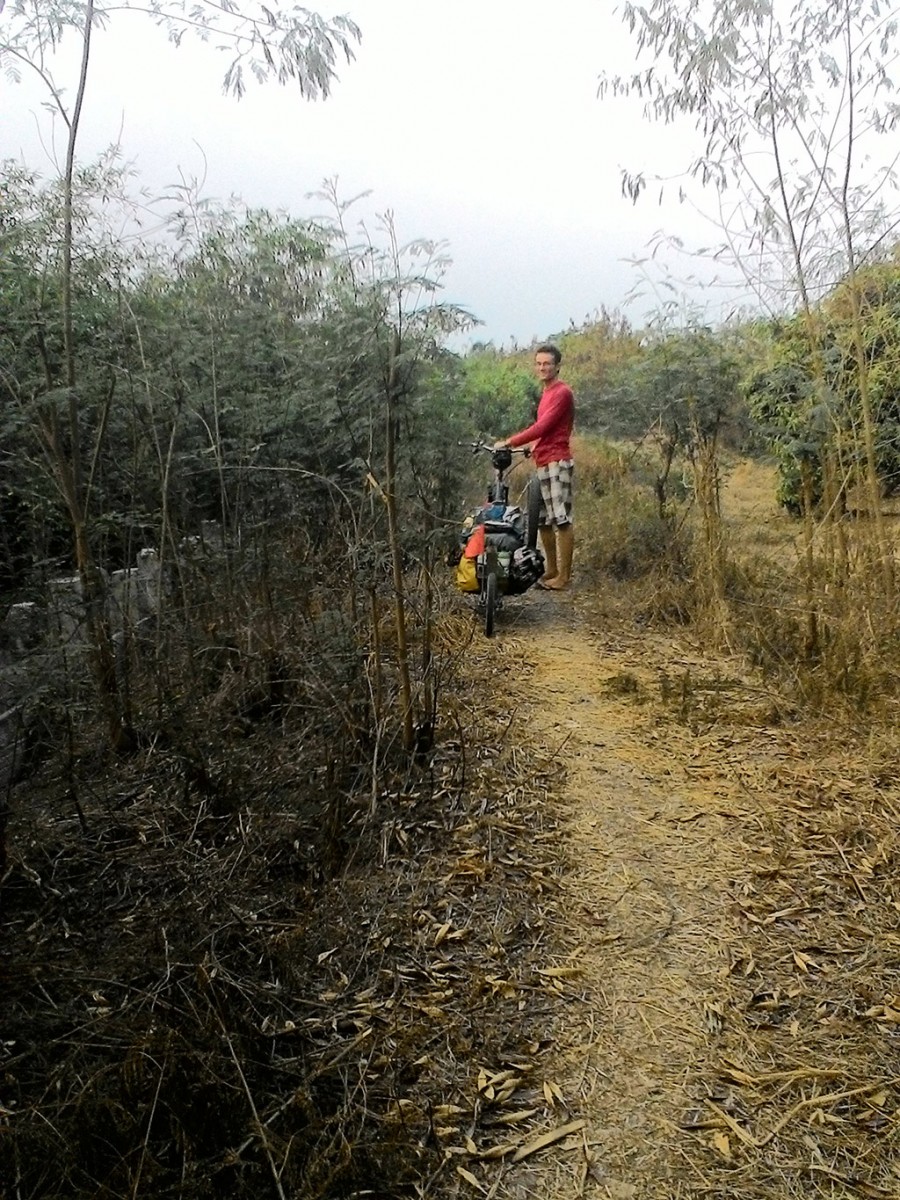 Oups… Do never trust a GPS completely. By trying to find the smallest and quietest track all the time sometimes that ends up like this… ;-)

After an hour more cycling on a real road we ended up in a town called Sin Buri. We got in the temple I’ve previously targeted on ‘Maps, met a monk who showed us where to sleep and take shower. Then we went out to find something to eat. We walked because I’ve just got a puncture (actually two!). We stopped at a place that looked like a restaurant but the couple served only take away and they had only one meal left. Pita explained that we were looking for a market that was supposed to be around. The man offered to drive us there.

As we were driving Pita and Tongkiat (That his name :-) decided that we would not go to the market but to a cheaper place. Few minutes later he let us front of that cheap restaurant and offered to call him back when we would have finished our dinner. Wow! For one time we decided to walk, we found a taxi driver :-)

After dinner we called him back, a minute later he was her, 2 minutes later we were at the temple. Pita and Tongkiat kept talking about our trip I presume when she came back to me: “This man invites us to his restaurant to sleep”. I was embarrassed for the monk who took the time with us but he came back and Tongkiat explained to him. The problem was solved. I put my bike at the back of his car (because of the flat tire) and Pita cycled to his place. Another minute later we were all arrived. The couple was very sweet. They offered some fresh water, made room for us in their restaurant, we had shower and toilets. That’s called being very lucky :-) Good night!