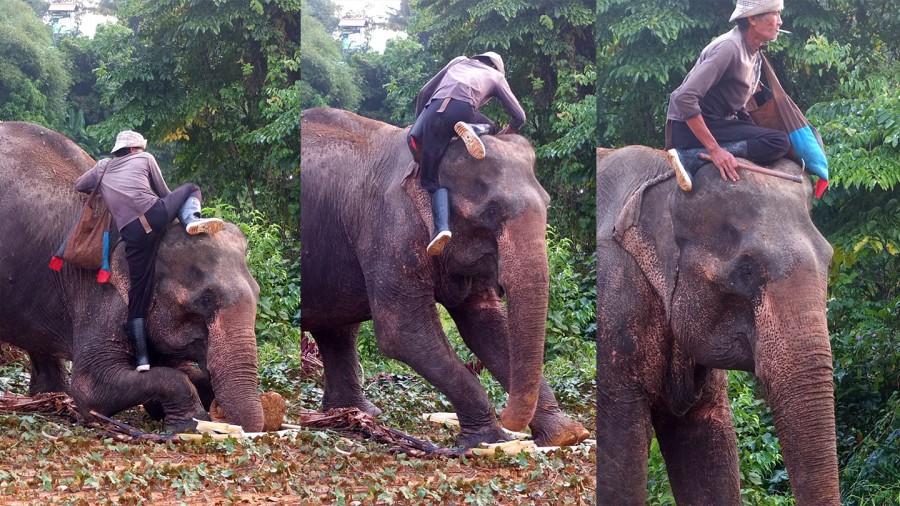 Last night was quite good in the Buddhist temple except I’ve forgot that monks wake up very VERY early each morning. At 4:30, the prayer started and last maybe one hour. At 6am when we woke up, we saw monks walking out of the temple to collect food for the day. When we left the place, the monks were not back yet but we could say “Kapunkaaap” to a woman who were sweeping the ground. The biggest surprise of the day was, very hard to guess, elephants! Soon after we had breakfast, we saw an elephant and it’s “owner” walking on the side of the road. There is a place called “Sangtawan safari” nearby. I imagine these elephants are accompanied outside daily to have something to eat and maybe to do some little work once a while. Today we did enter in the Phuket peninsula for real and saw even more elephants used for tourist trekking. Finally, we finished the day by camping next to the beach in a cemetery.

Very short video of the first elephant we have seen this morning (my battery run out of juice just at the wrong time…). 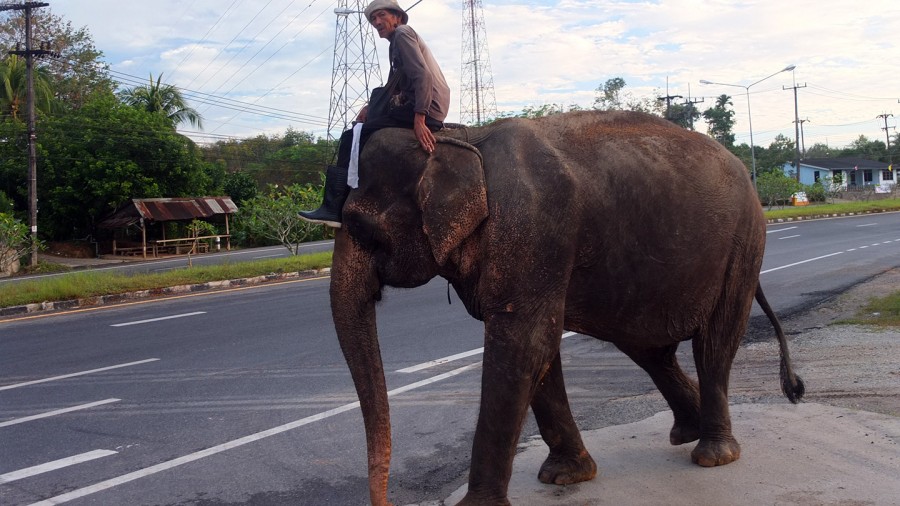 Few minutes later, we saw another guy with “his” elephant who works for the safari. 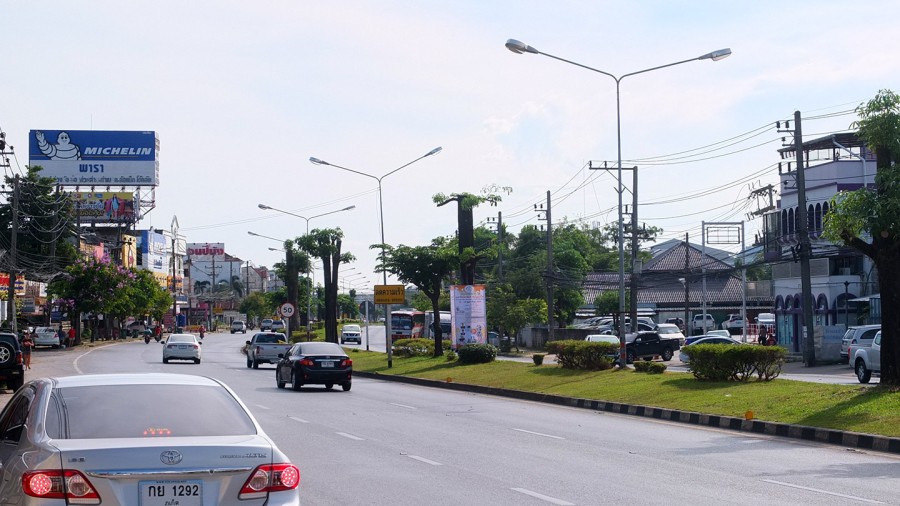 A look and feel of Phuket island. I’ve imagined something completely different. Phuket is actually much bigger than I thought. 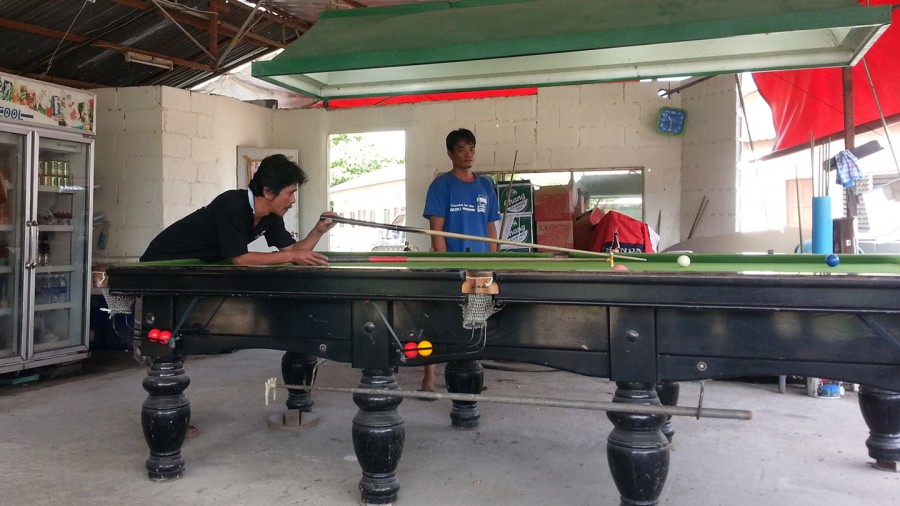 As the usual weather becomes very hot from 11am we stopped at a place for a little while. We found an hidden restaurant in a tiny street out of the main artery. Three guys are playing snooker. Wow! That’s the first time I see a snooker in a “bar”. Normally the smaller size are the most common. The snooker is to me the hardest pool game to play especially when your are not very fresh like those three guys haha. They are under alcohol and smoke cigarette after cigarette. The guy on the left side offered us to taste his Thai whisky which is very tasty. The bottle is filled with a certain kind of wooden sticks which gives that specific smoked taste to the alcohol. They barely stand straight but can keep playing. I’m pretty sure they started early this morning haha. They also bet nearly on every shot. Each of them has a plastic box with money. Since we arrived the guy with the black shirt lost all he came with, something like 3000 baht! ($120 AUD). Then he got more lucky and won some money back later on. They keep exchanging money between the three of them. Sometimes some of the people watching bet as well. Money fly all around here haha. We had our lunch here and stayed for a while until we kept moving towards the south of the peninsula. 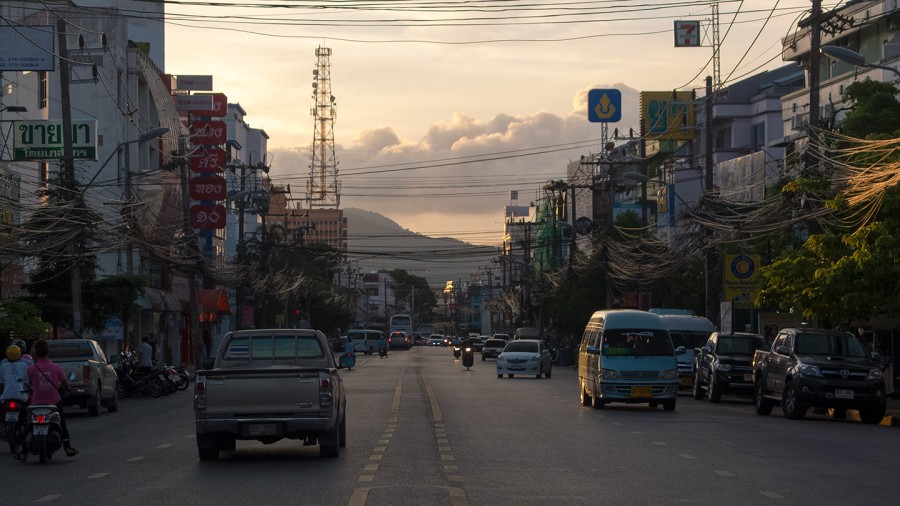 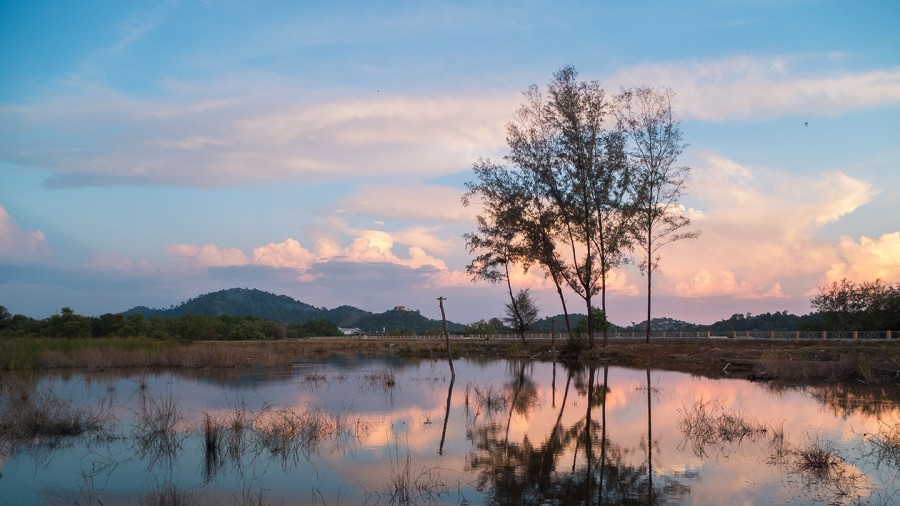 We are looking for a place where to camp tonight. 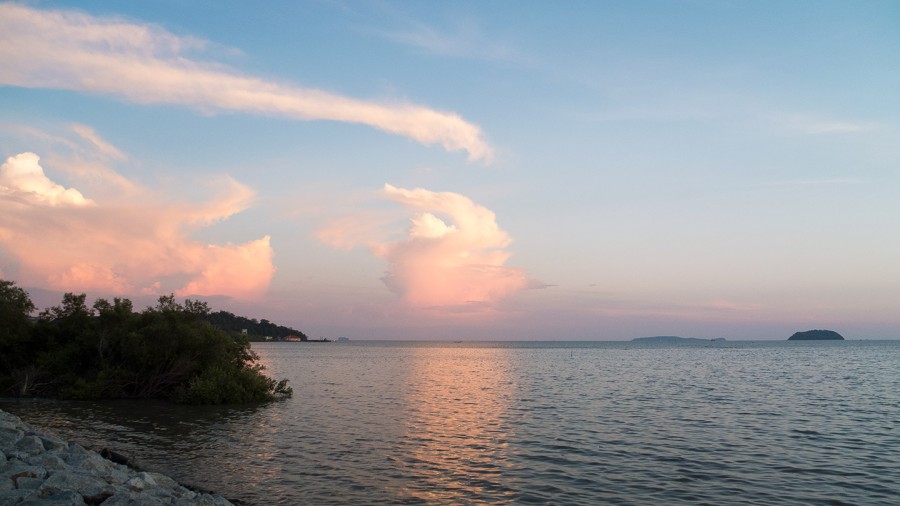 Nothing special yet but nice pinky clouds. 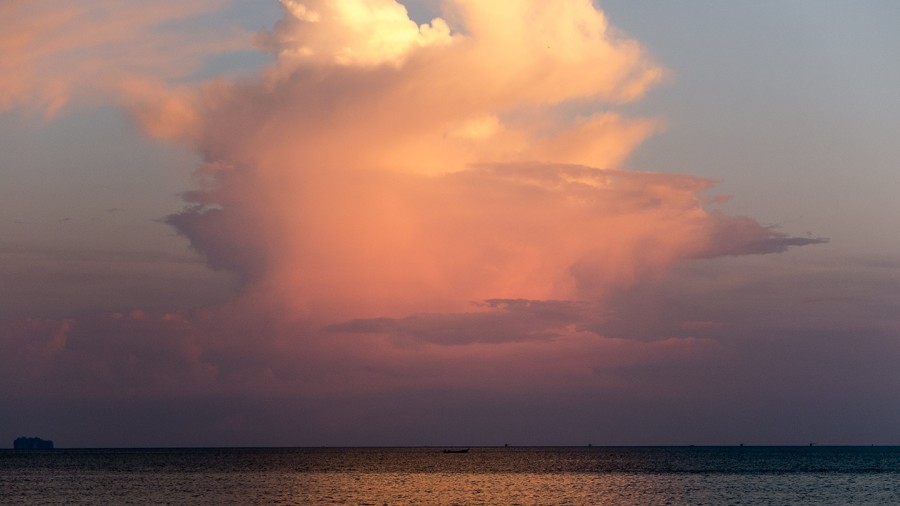 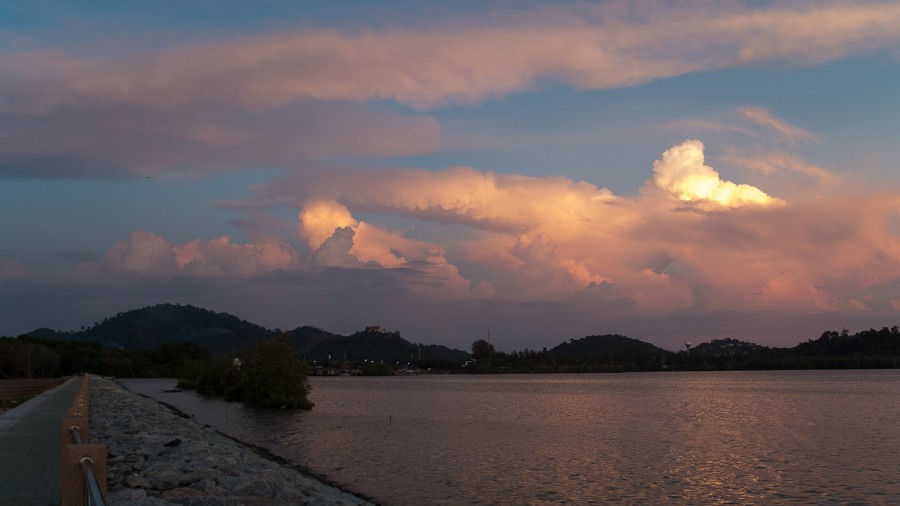 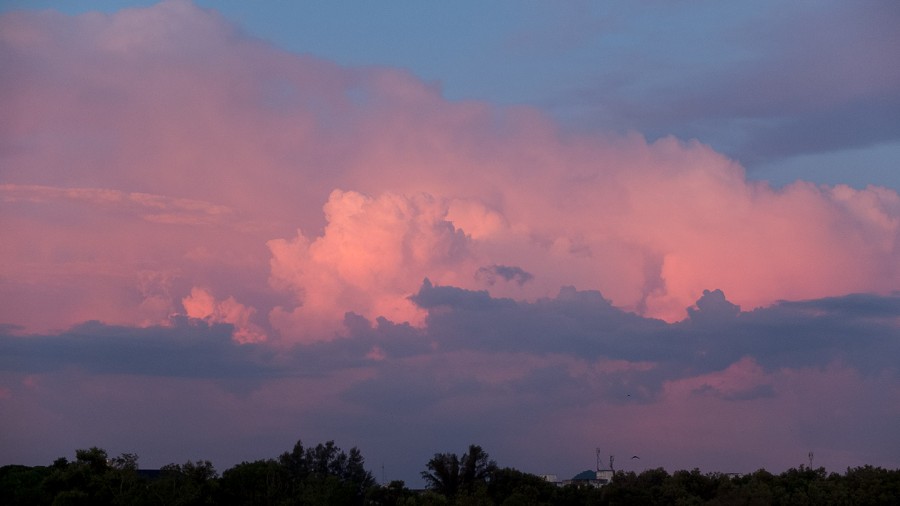 It’s getting dark. Let’s find something to eat and then we will come back here. It seems like there is far enough space here to not be disturb when camping. 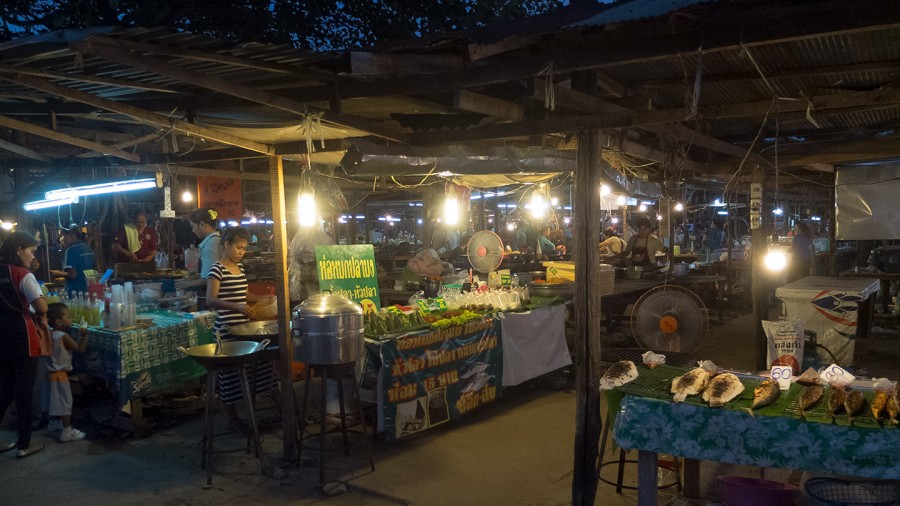 On the way back towards the city centre, we crossed again a huge night market. Unfortunately we cannot eat here. This is take away only (with lots of plastic around, bah!).

We came back to a restaurant I’ve seen earlier this late afternoon when we were simply cycling around ;-) It is a bit off the main road compared to the other. I like this :-) We got back there. The restaurant was dead empty at first but the staff was nice, especially the boss who had a big smile. When he saw us coming, he reached the front of his place and looked at our bicycles then he said: “Good! Good, good, good!”. haha :-). We chose our dinner, sat and enjoyed a fresh drink waiting for the main course to come. Quickly, more and more people arrived as our dinner. The food was good. I had some fish mixed with capsicums in a sauce served with white rice. All good.

When we finished, we standed up and walked towards the counter, well, the table where was sitting the boss. The guy said something first : “No, ok”. Uh?. Then he took his calculator and show us ‘0’. “no pay”. Really? again? The old man was really happy to offered us dinner. Sometimes we feel people treat us like tourist and rise the price. Sometimes it’s completely the opposite, the food is free! Kapunkaaap :-) Bye bye, Sawadikaaap (greetings).

I start to believe that there is an unseen force that balanced each day.

Finally we did not come back to the spot we found earlier and kept cycling south again. The road was mainly going downhill so we covered the 18 kilometres wanted in less than an hour. When we got close to the beach we were looking for, we found a short road that leaded us to a dead end. Perfect! At this end, on the left side, there is an access to the beach. On the right side, an opening through the wall where we discovered an old cemetery. For sure, it will be quiet here. Good night!