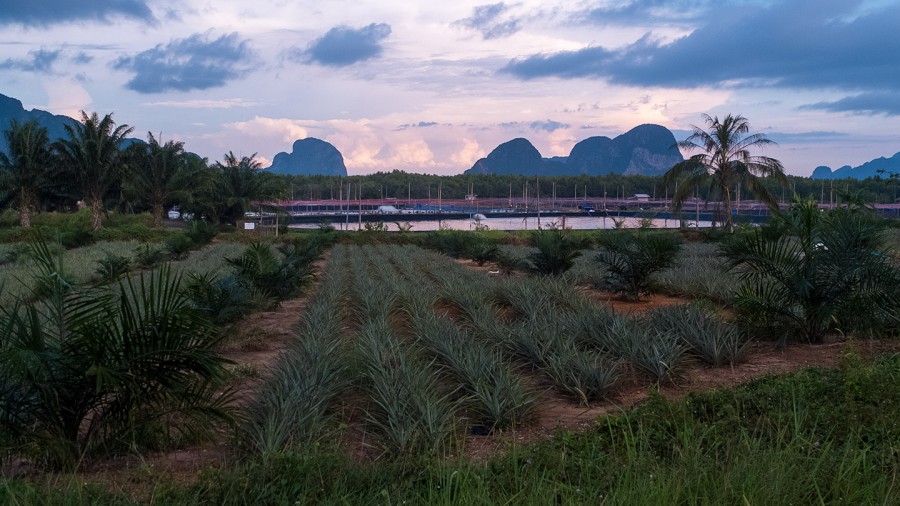 Now I’ve discovered how look pineapple fields I see them everywhere :-) Last night was not as we expected, it was nothing like peaceful. For the first break of the morning we stopped at a petrol station overwhelmed by american comics icons like Hulk, Spiderman and many other. That’s strange to have these here. For lunch, we found a tiny place along the road where a woman was cooking under a shed. One of them, the older, offered us the meal. Wow, thanks! Today, my GPS died… I had problems since I left Sydney. They got worse and worse until the end, today…We finished the day by visiting another huge Buddhist temple and slept in an other one where we got invited by a very nice monk. That’s the day of today :-) 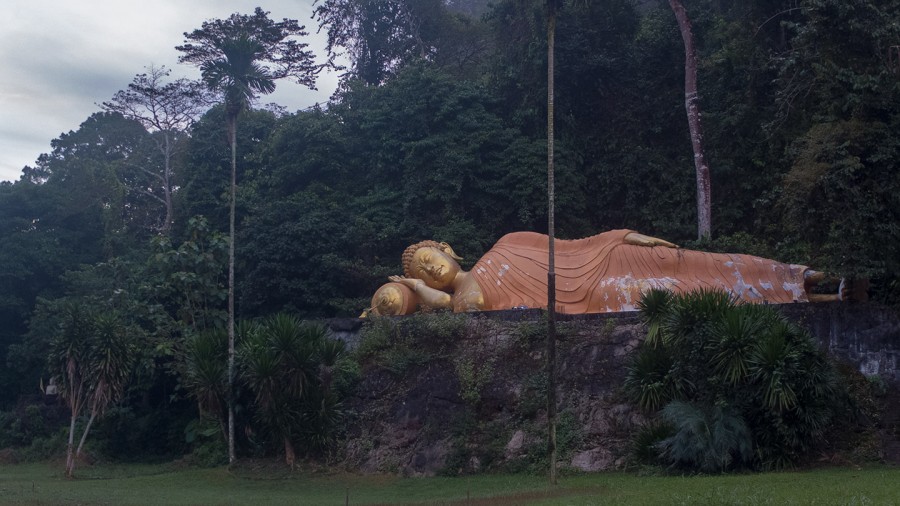 As I mentioned in the introduction, the last night was the opposite of what we expected. Once installed and ready to sleep, we realised that the forest in which we were staying was like haunted. Lots of inexplicable noises, like people walking, branches cracking, heavy things falling on the ground… On the top of this, there was some monkeys shouting and fighting not far from us. This noise pollution went on almost all night. Bloody monkeys! Apparently it did not disturb this sleeping Buddha :-) 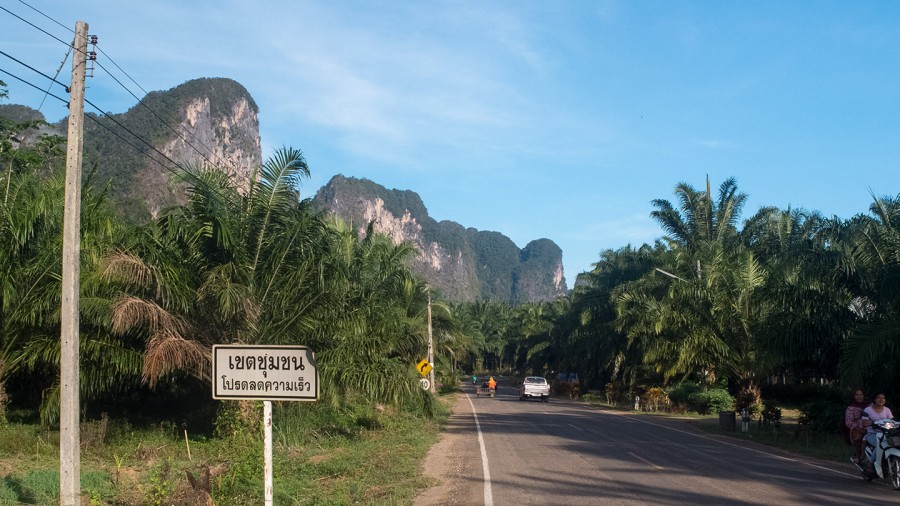 Back on the road. 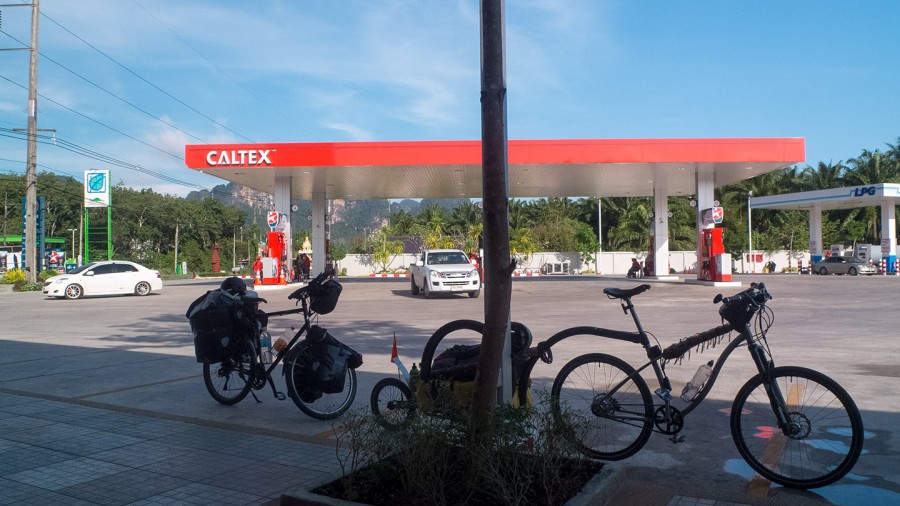 20km later we reached the highway again. Just there, a petrol station with shade, good :-) 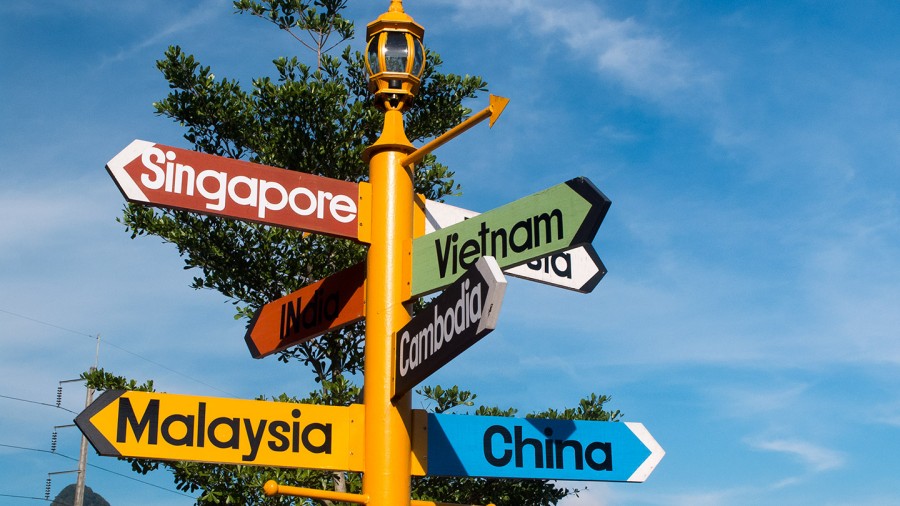 What this signs are doing here? Usually, I see them in touristy places but here? in a petrol station? My only guess is that’s the main road between Ao Nang beach (Krabi) and Phuket. The buses must stop here for a break so that entertains the public. 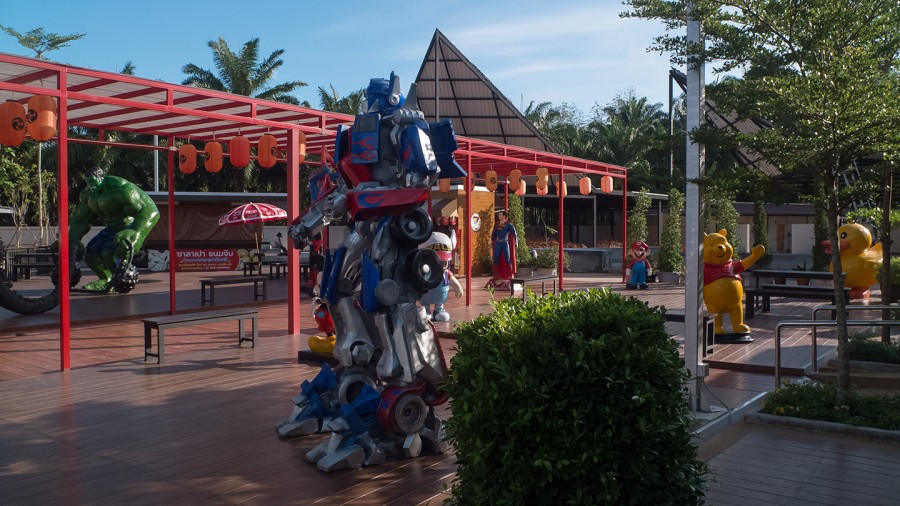 haha, seriously? Transformers, Hulk, Spiderman, Superman, Winnie the Pooh, Mario. Looks like US have taking over this place. I don’t like this. 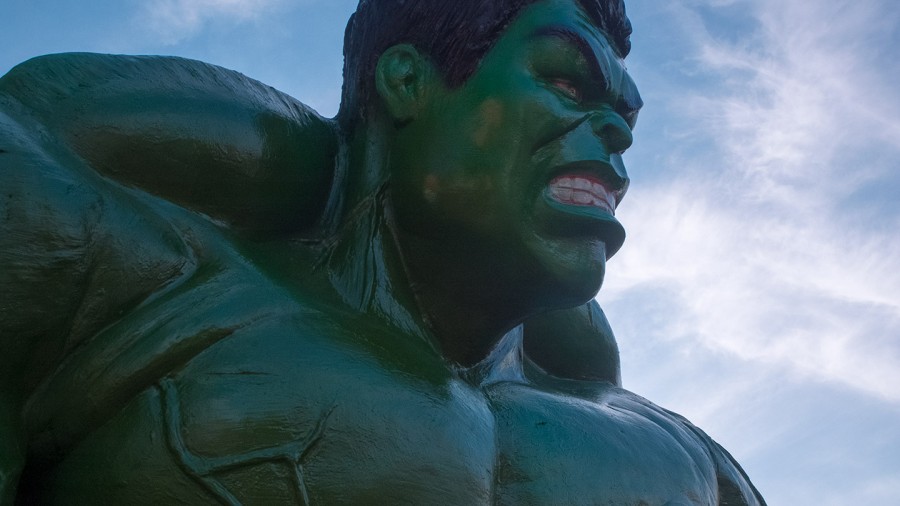 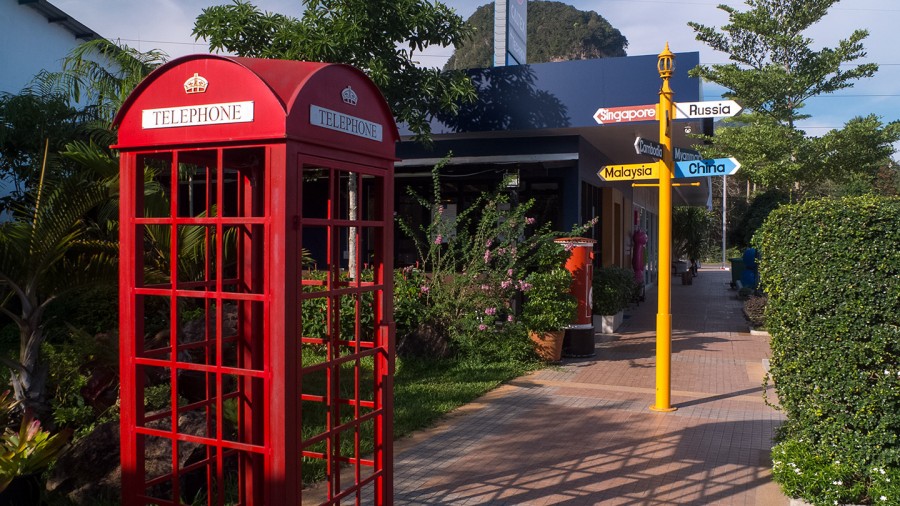 I missed this one: an english telephone booth waiting for selfies. 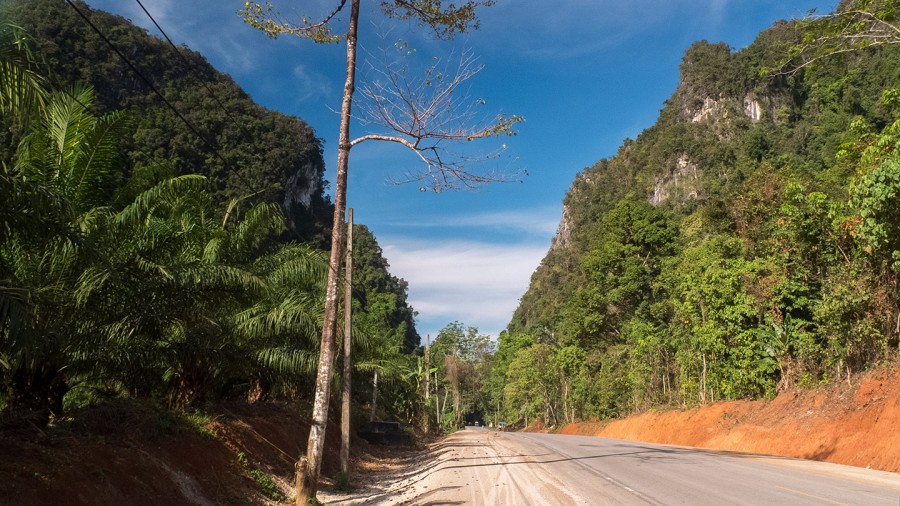 Later on around 11am, the heat became too much. We had to find a place where to eat something and rest. On the side of the road, there was a large car park with a local supermarket. Just at the end of that parking area, we’ve seen something that looks like a warung (I don’t know the Thai name ;-). There was only two tables: one for the kitchen and the other for the customers. First, we did not know if they were selling something. It looked like a bunch of women came here to have an advanced picnic. We tried to explain that we wanted to eat something. The oldest, with a big smile, shook her hand towards the two seats. Obviously, we could stay here :-) There was a dozen plates and bowls onto the table with different things in it like green beans, eggs, carrots, radish and other things that I could not named. The chef, brought us a plate each filled with noodle and some spicy sauce. Like many other people here, they asked “You can eat (spicy)”? Yes we can :-) I don’t know yet how do they eat here but if I see a dozen different veggies and spices on a table I want to try most of them. I took one, two, then three… The women looked at me waiting certainly for me to pick up the extremely spicy stuff. Each more thing I picked was following by a “Ooooh and some laughs”. We did not have any clue of what they were talking about but they did talk a lot haha. They might say: “these guys eat alot and spicy. How this possible?”. The secret: we are cycling ;-) The food was delicious. I wish I would take some pictures but Stephane would do the same too. I would feel like we are paparazzi more than cyclist travellers. So we kept the moment as it was and enjoyed. Then, the oldest decided to leave and paid our lunches. Really? sure? Kapunkaaap! (thanks in Thai, for men). Women say “Kapunkaaa” without the ‘p’ at the end. We finished our meal and 10 minutes later we were back on the road to find a spot where to avoid the heat and have a nap. 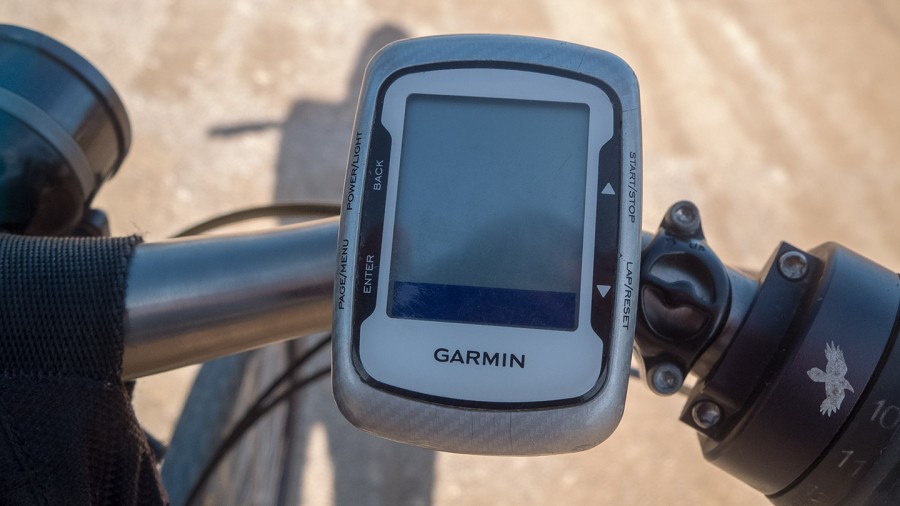 When we started cycling again, I could not turn on my GPS again… Rah! I think this time is the end… I will have to contact the customer service and expect they can repair it because the service in Kuala Lumpur was useless. 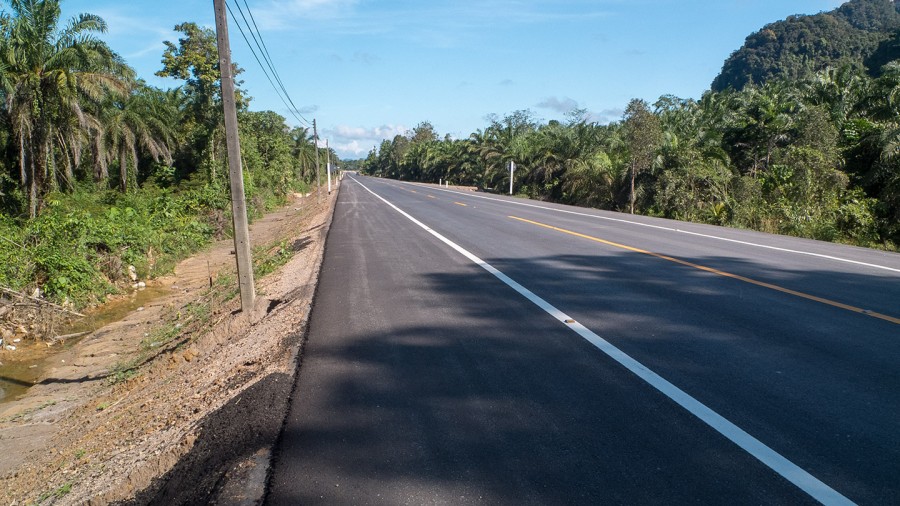 Few! This is so hot! Where are the nice shady spots? 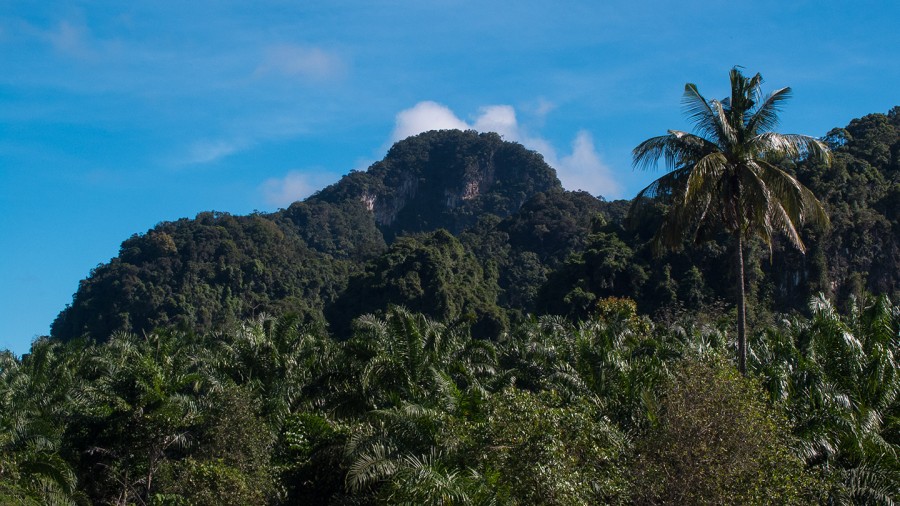 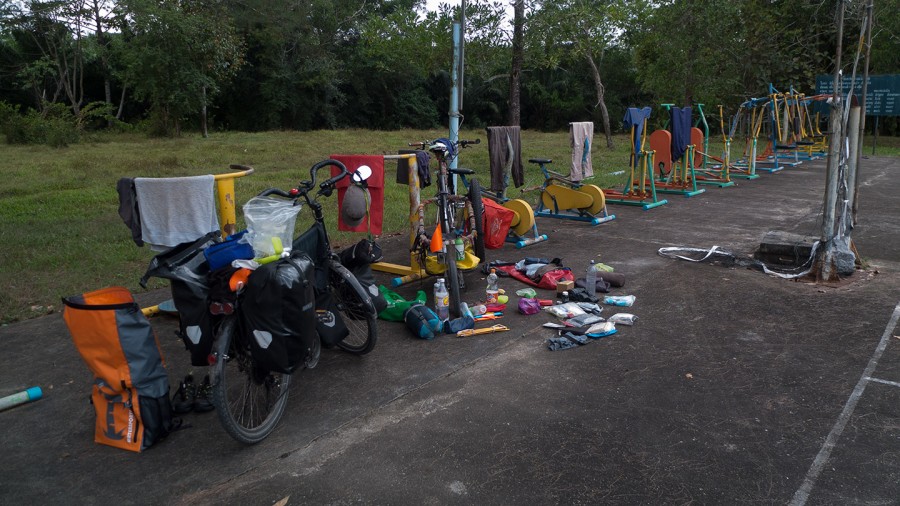 Finally, we stopped at a sport field. Villagers haven’t use this place for ages I guess. Every equipment is rotten. At least they are useful to dry clothes :-). I’ve completely emptied my bag to get rid off the humidity before it smells death inside.

The last break was ok but still too hot. The clouds plus the trees did not help fighting against the heat. Anyway, we are back on the road again. We are now cycling through farms area: Palm oil trees, fish farm and pineapple fields. 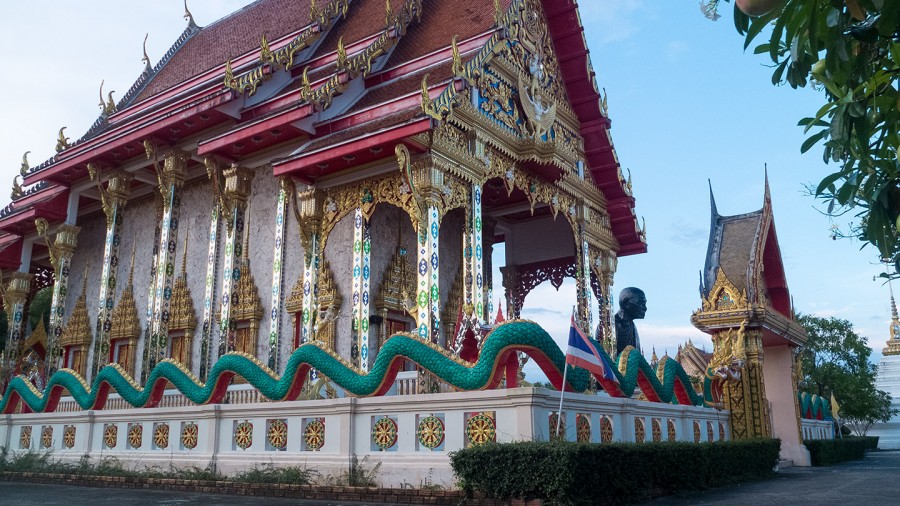 Along the road, we have seen this huge Buddhist temple. 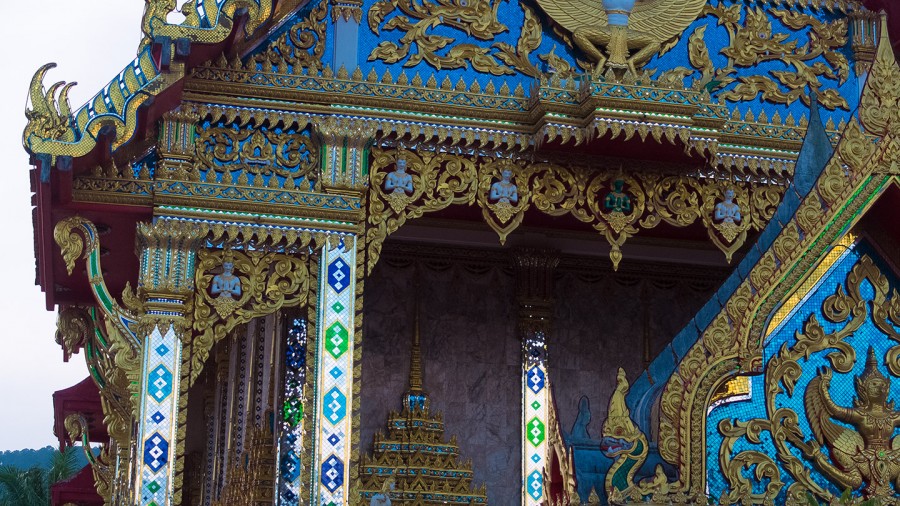 So much details… I don’t know how to take the picture. 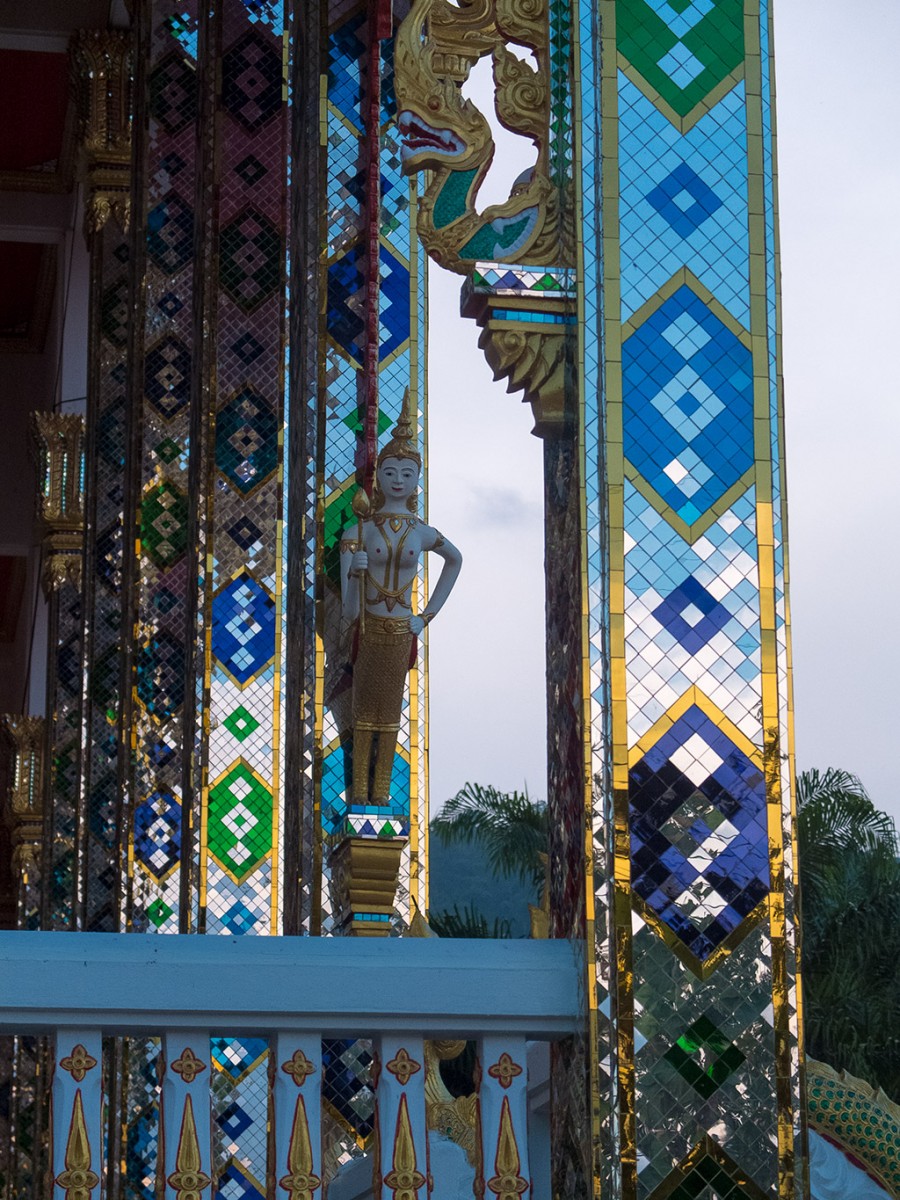 Most of the temple surface is covered with reflective tiny tiles that create patterns and graphics shapes. What a job. 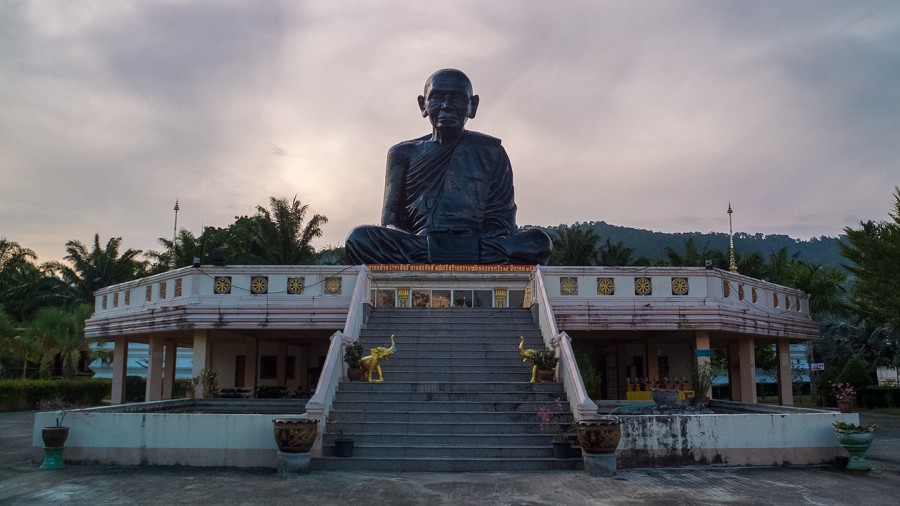 This is the one that makes us to stop. 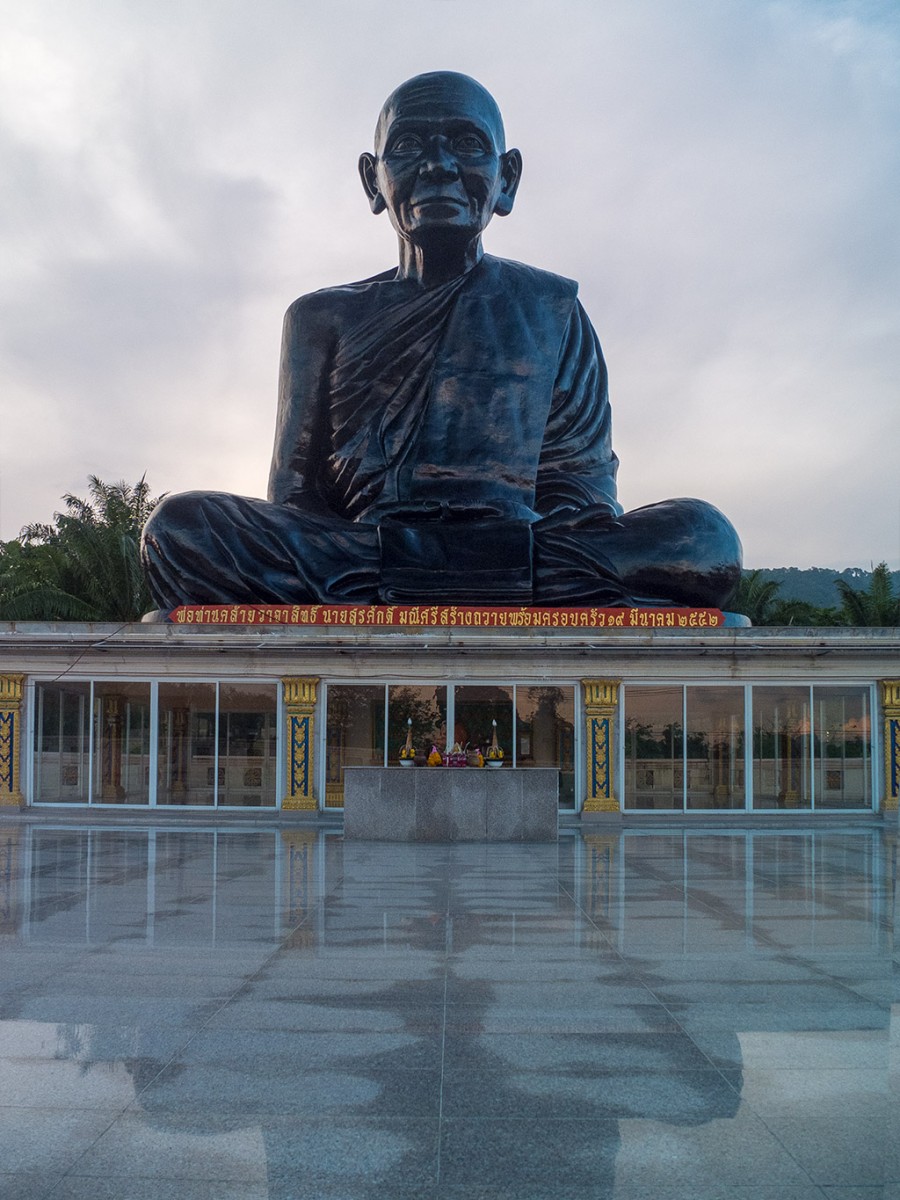 A huge monk statue! There is no subtitles so my guess is that’s the monk who chose the emplacement and built this temple. Maybe not… 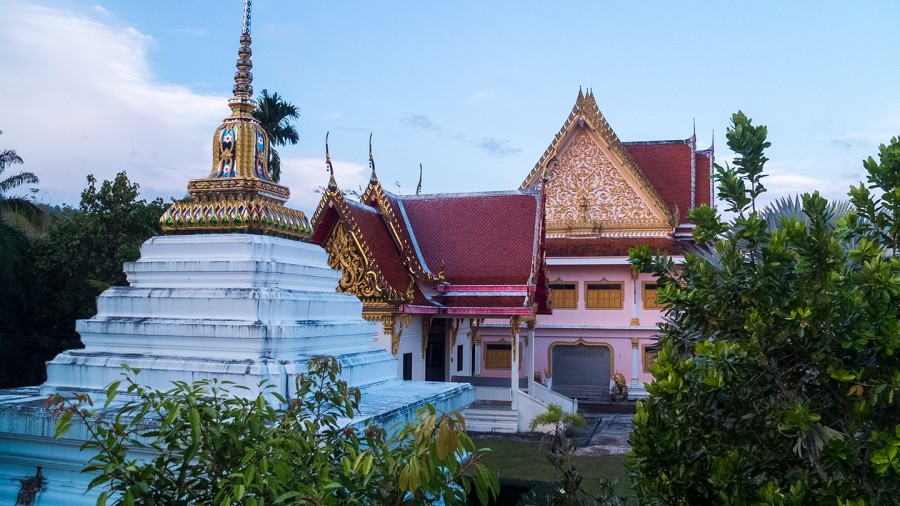 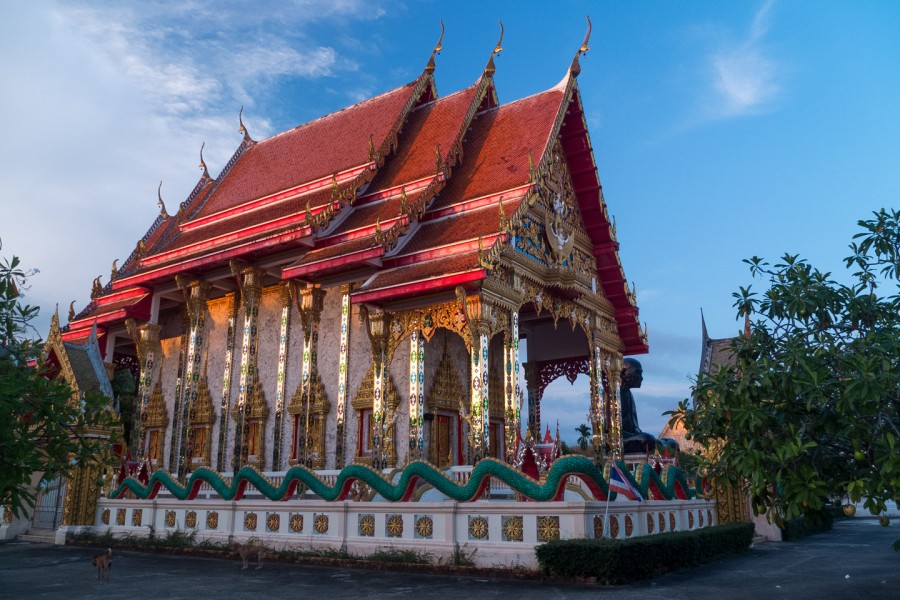 Back to the first one. The sun just got through the clouds letting the temple shining. 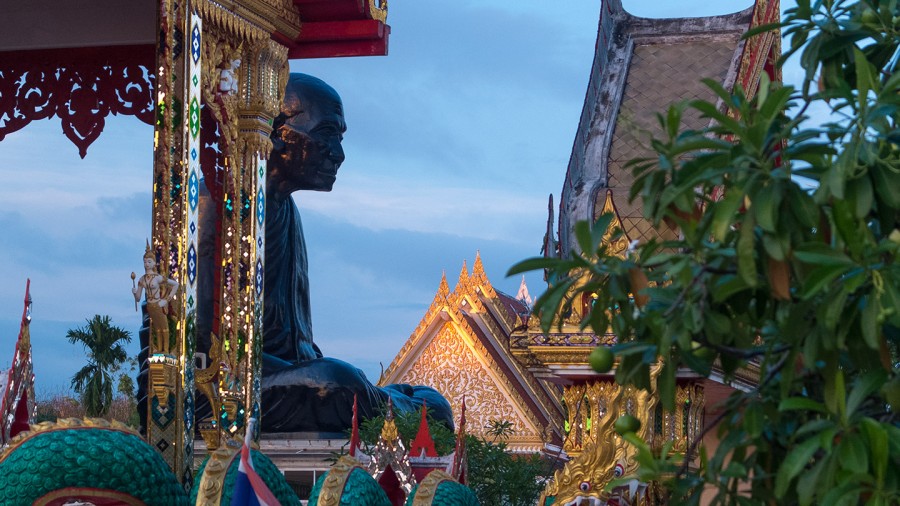 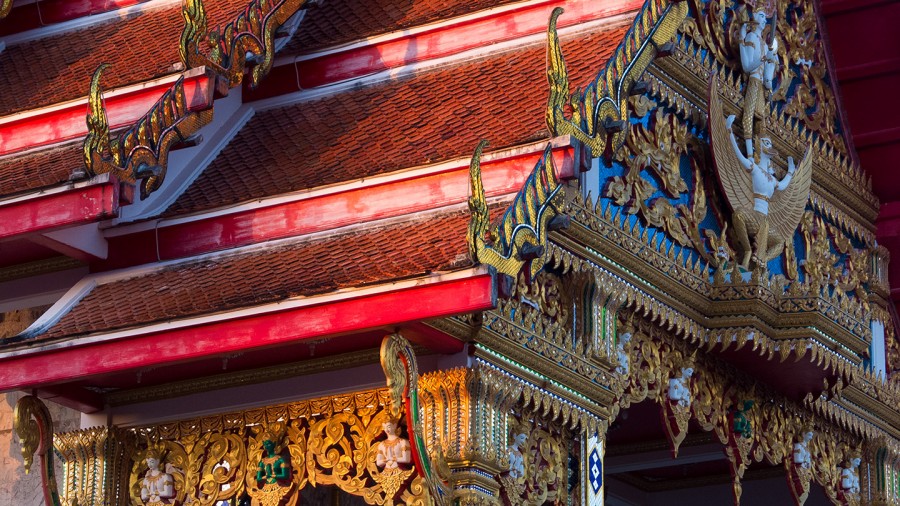 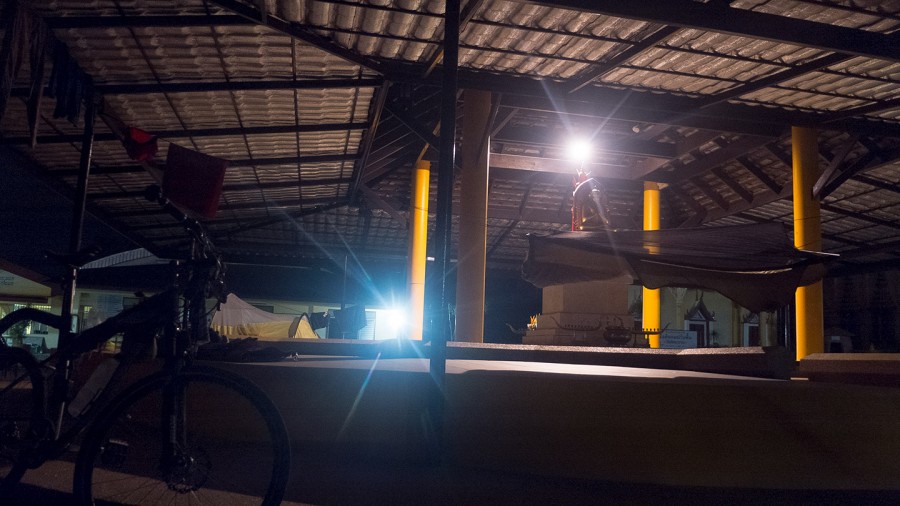 After the temple visit, I’ve spot another river on the map but we could not have any access to the road. Right after that, it became really hard to find a place where to eat. We had to cross the road and ask to a restaurant that was already closed but people still remained. A nice guy who enough spoke english redirected us to an open place. He also told us that there was a buddhist temple 100 metres further after the restaurant on the left side of the road. If we wanted, we could try to ask their if we could sleep somewhere. That exactly what we have done: dinner first and then direction to the temple. As soon as we got their, a dog started barking at us. Quickly after that, a monk came to us. We used body language to ask if we could sleep here. The monk said yes with no hesitation. He even offered water. Then he asked to follow him. He showed us a room with a coffee machine then turned on the light outside and headed to the washroom place. We have toilets, shower and a roof under which where to sleep. Nice :-) Good night!