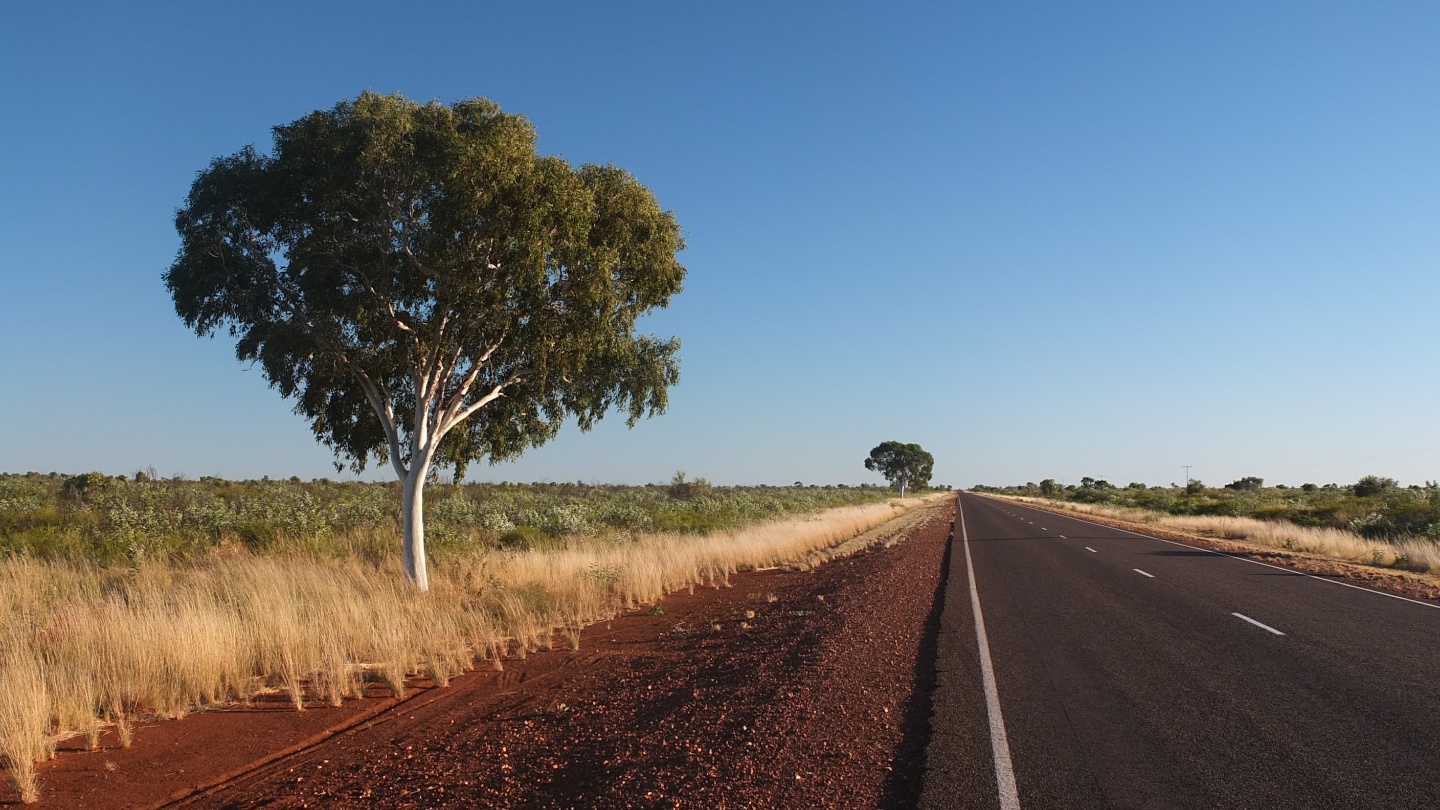 Last night was very good. I’ve heard someone driving around maybe around 9, 10 or 11pm. I was asleep and heard a engine outside. The car disappeared and it stayed quiet the whole night. BIG day ever today! I’ve never thought I would be able to cycle 150 on day but that’s it :-) I remember the day I met a german motorcyclist back on the west coast of New Zealand. He told me when I would be in Australia I would do 150km to 200km per day with a good tailwind. It did not happen very often though. I’m not trying to be as fast as I can as I’ve got time but after that lazy day yesterday, I don’t know, I feel like cycling :-) And look at that landscape! Amazing sky! Amazing straight road! Everything is perfect haha :-) 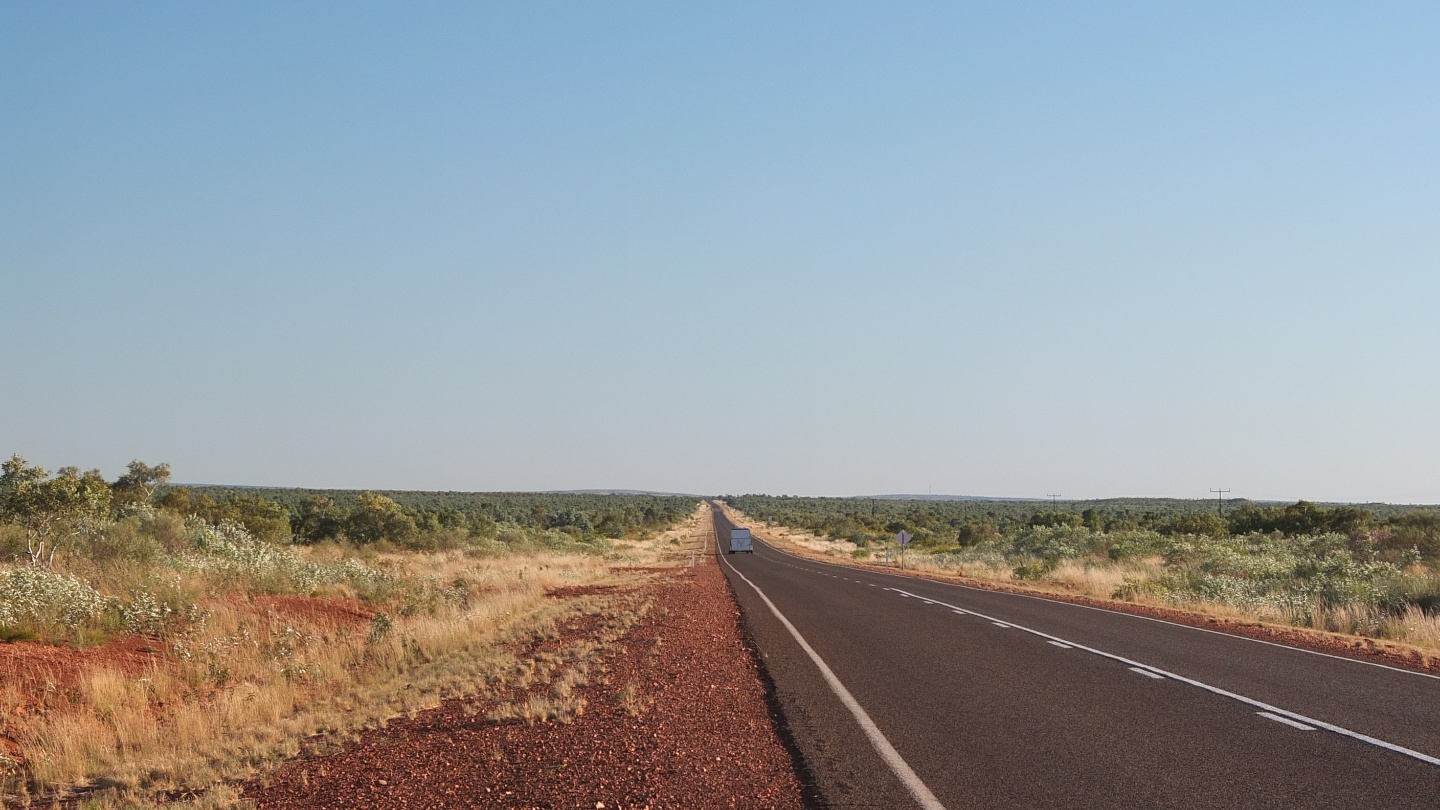 (That top picture was the first on of the day). A bit further the road is still endless, especially being on this tiny hill. 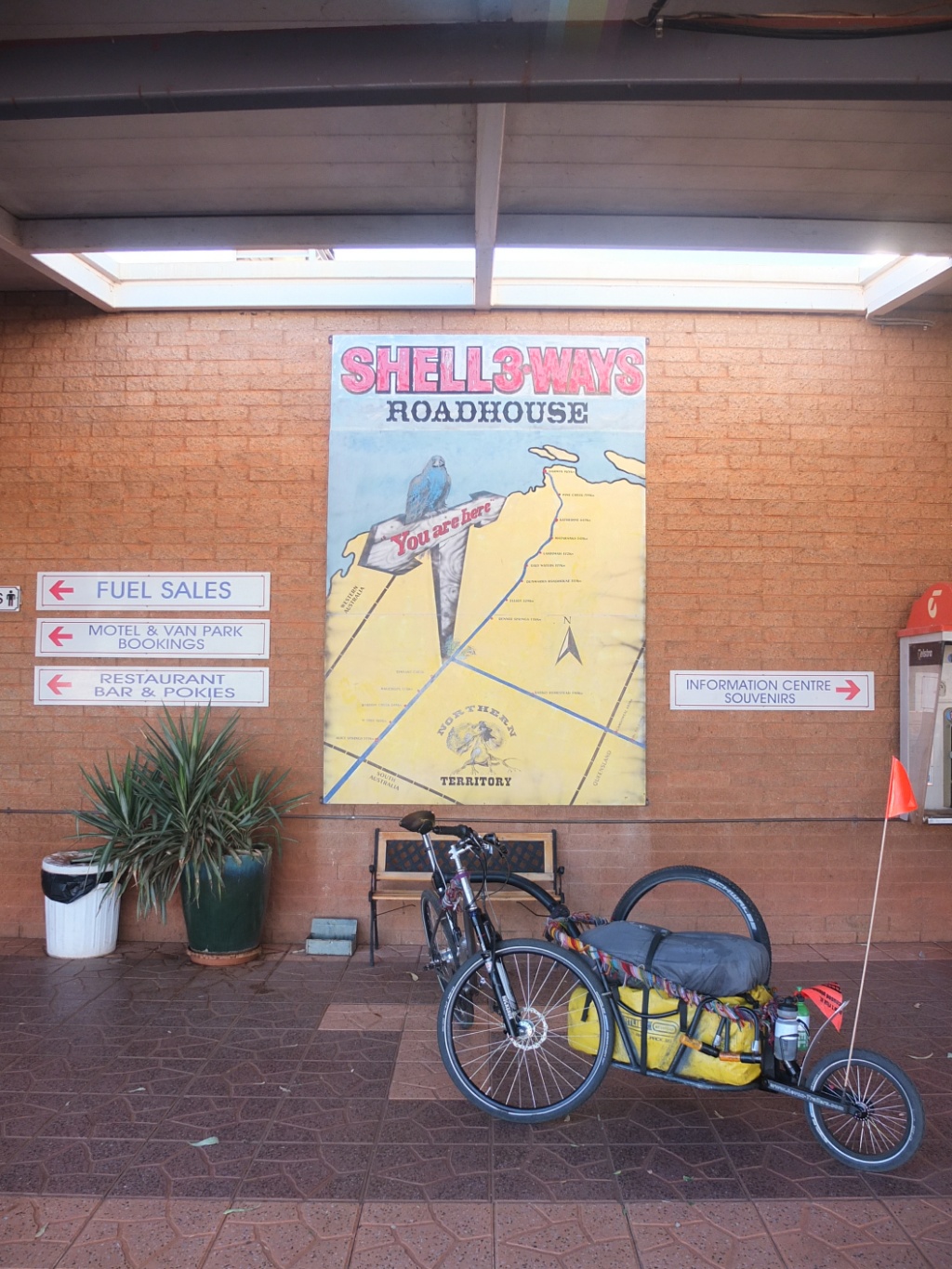 The first 14km are done and I’ve just reached the roadhouse called “3 ways”. From here, I could cycle east to Townsville I think, or continue to Darwin which is my way. This is why 3 ways, easy! 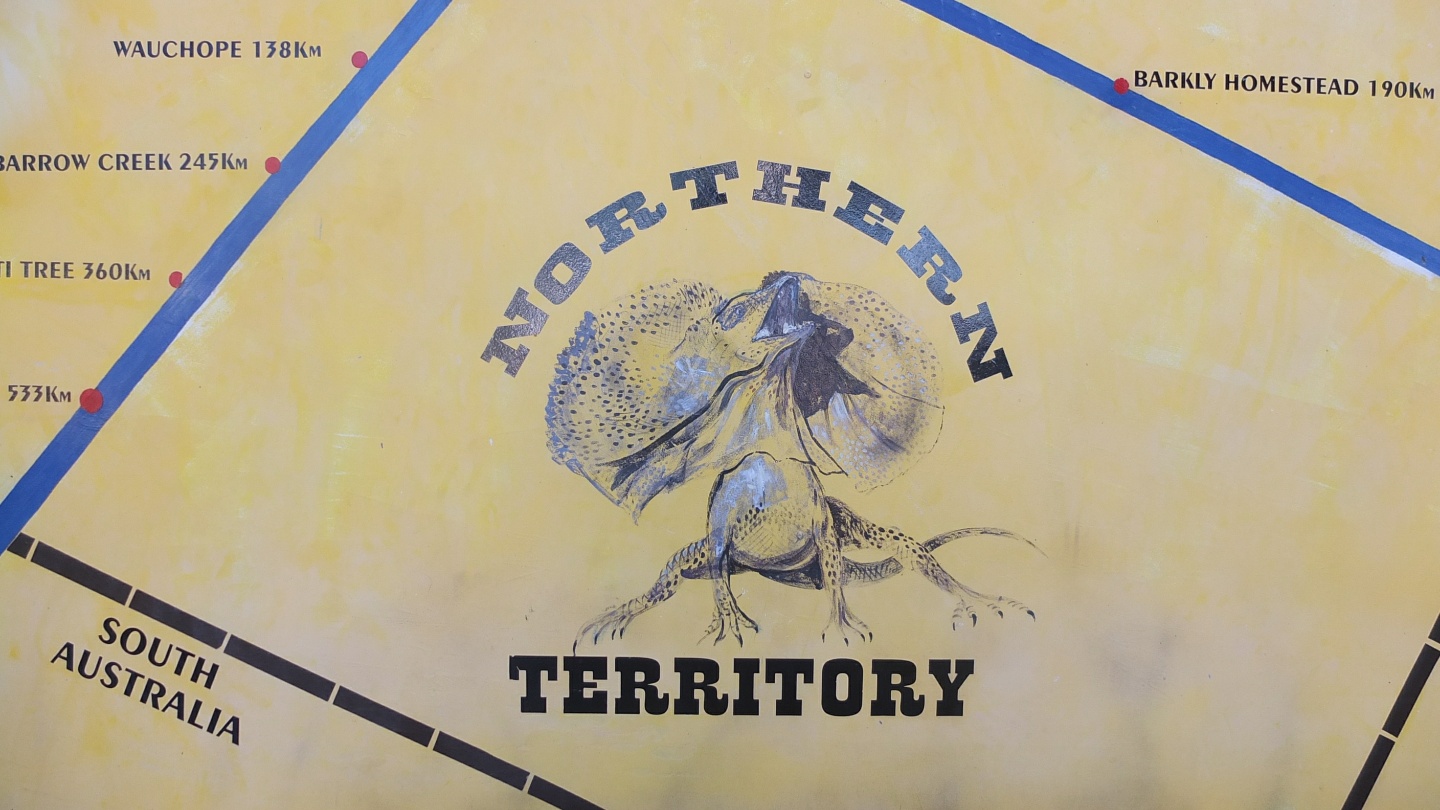 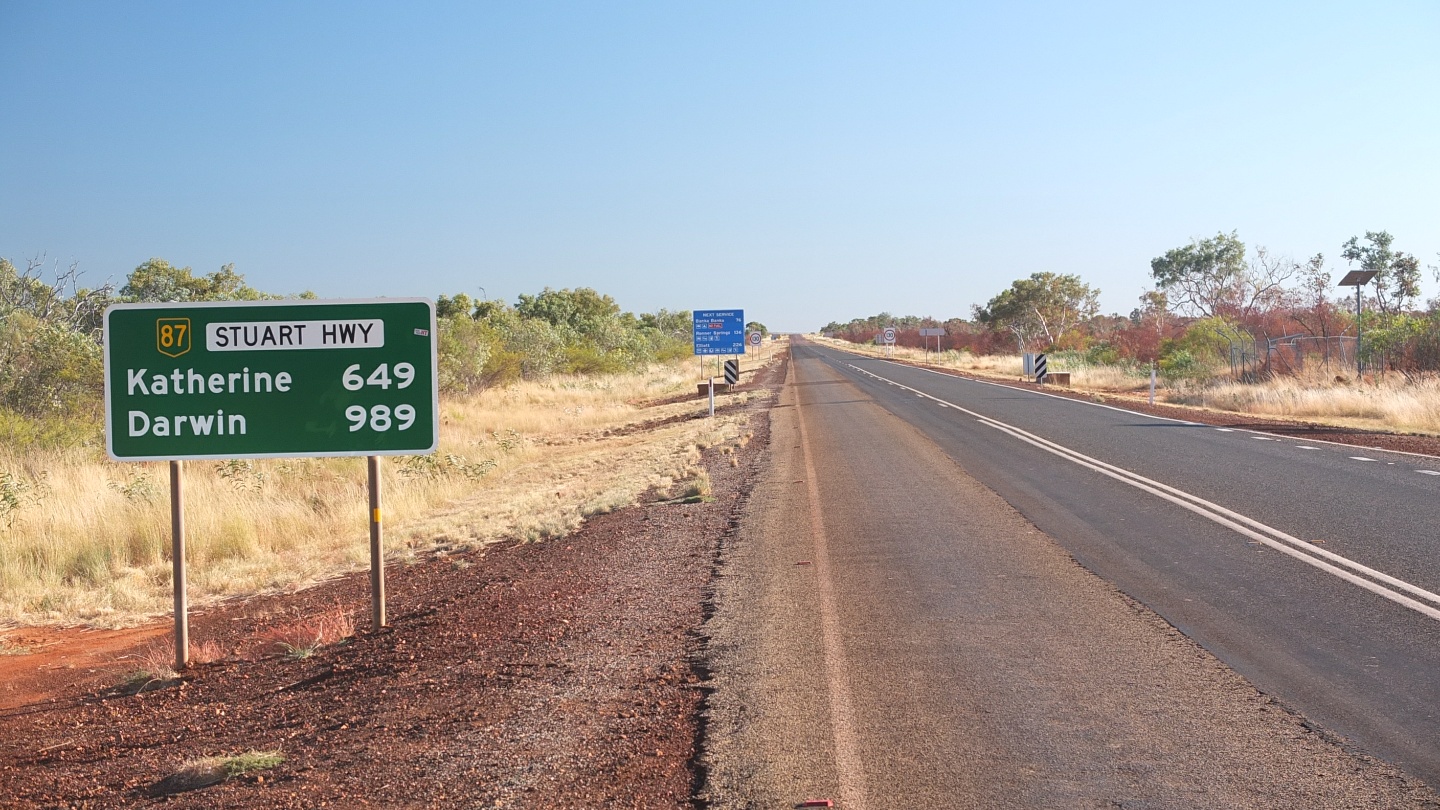 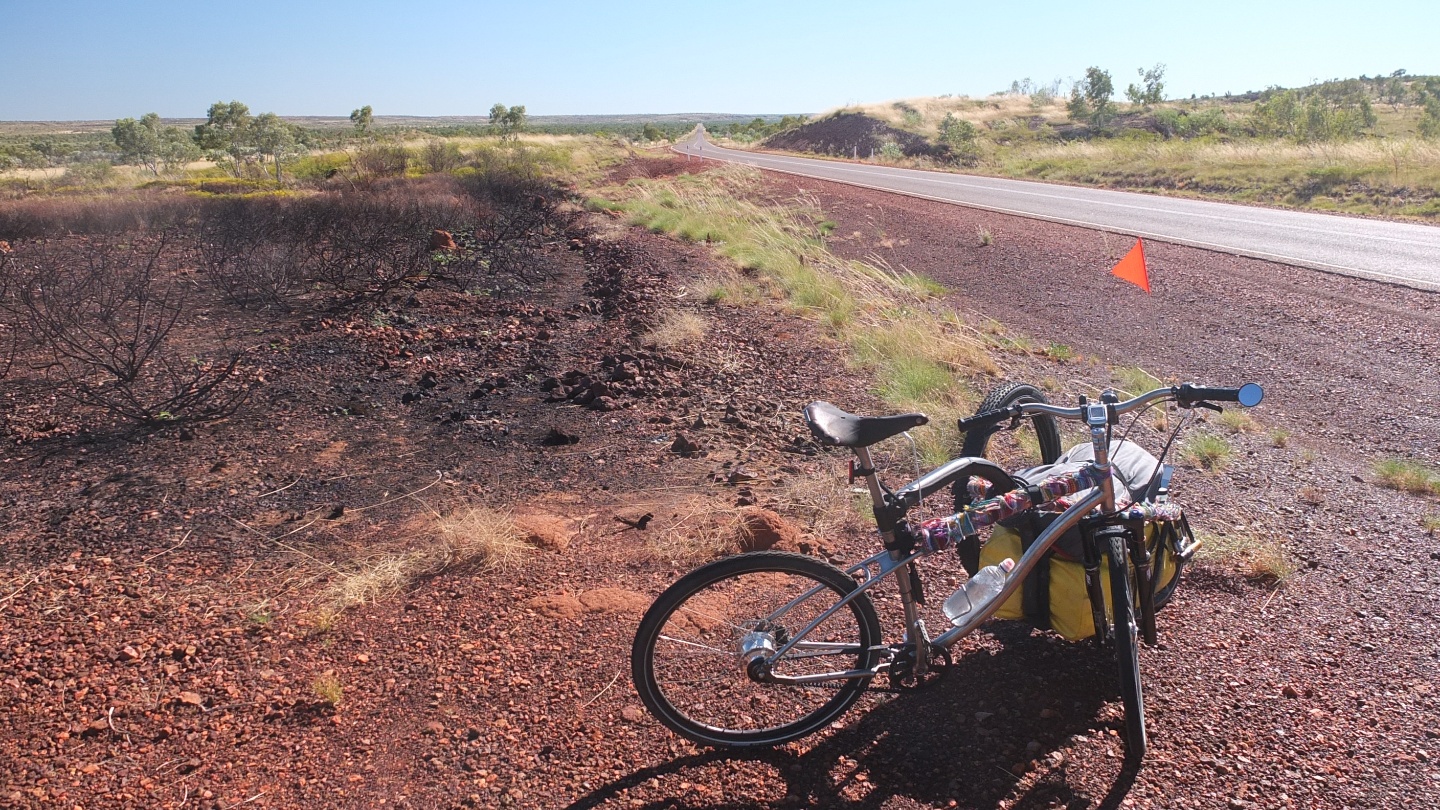 And that’s a break time. You can see lots of surface has been burn. I guess people, or farmers do that purposely. Bez (from the Uluru Tour) said that fires in Australia has always been natural and the land needs them to survive. Some seeds get release only when a fire pass through! 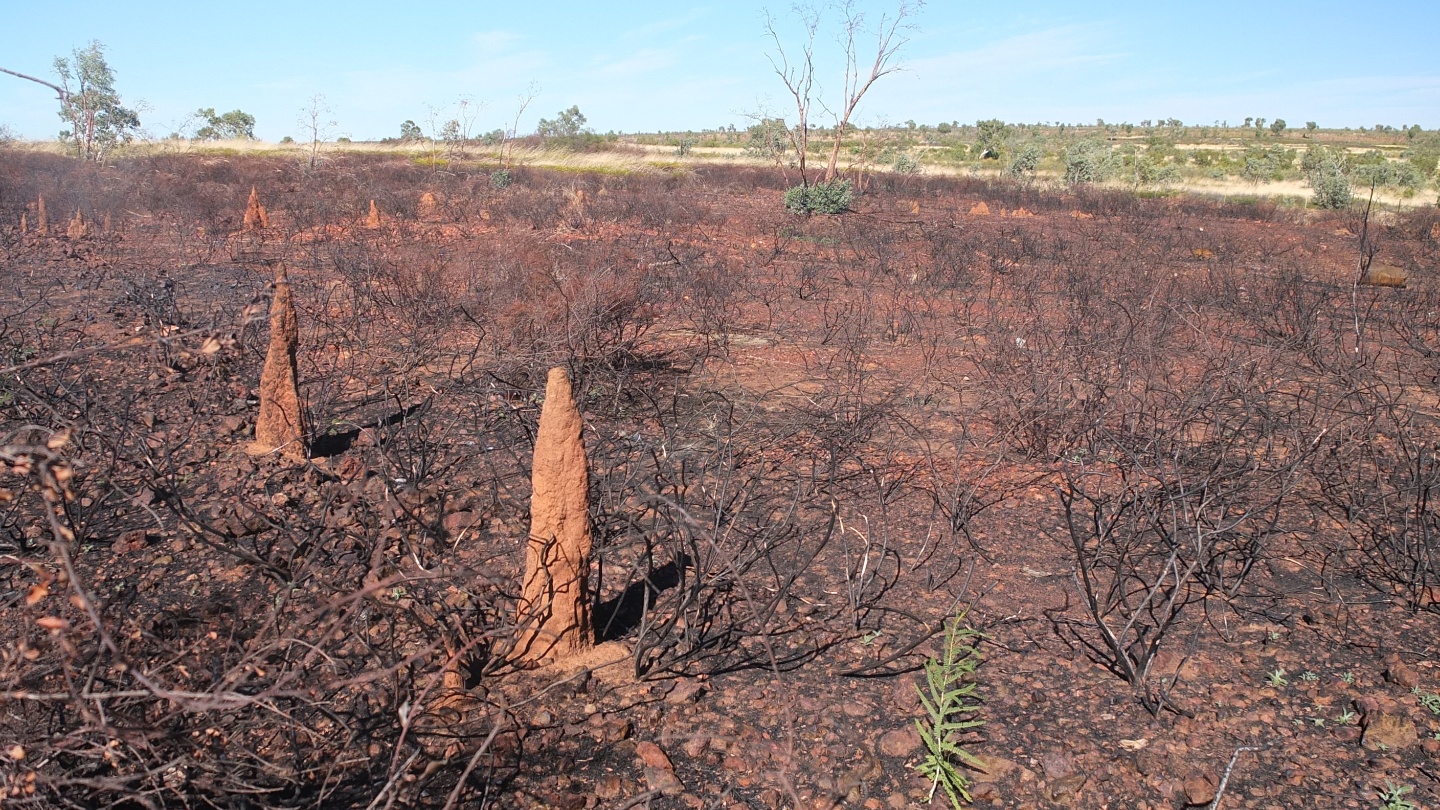 The termite don’t really care about fire apparently. Or maybe they built their home after it. 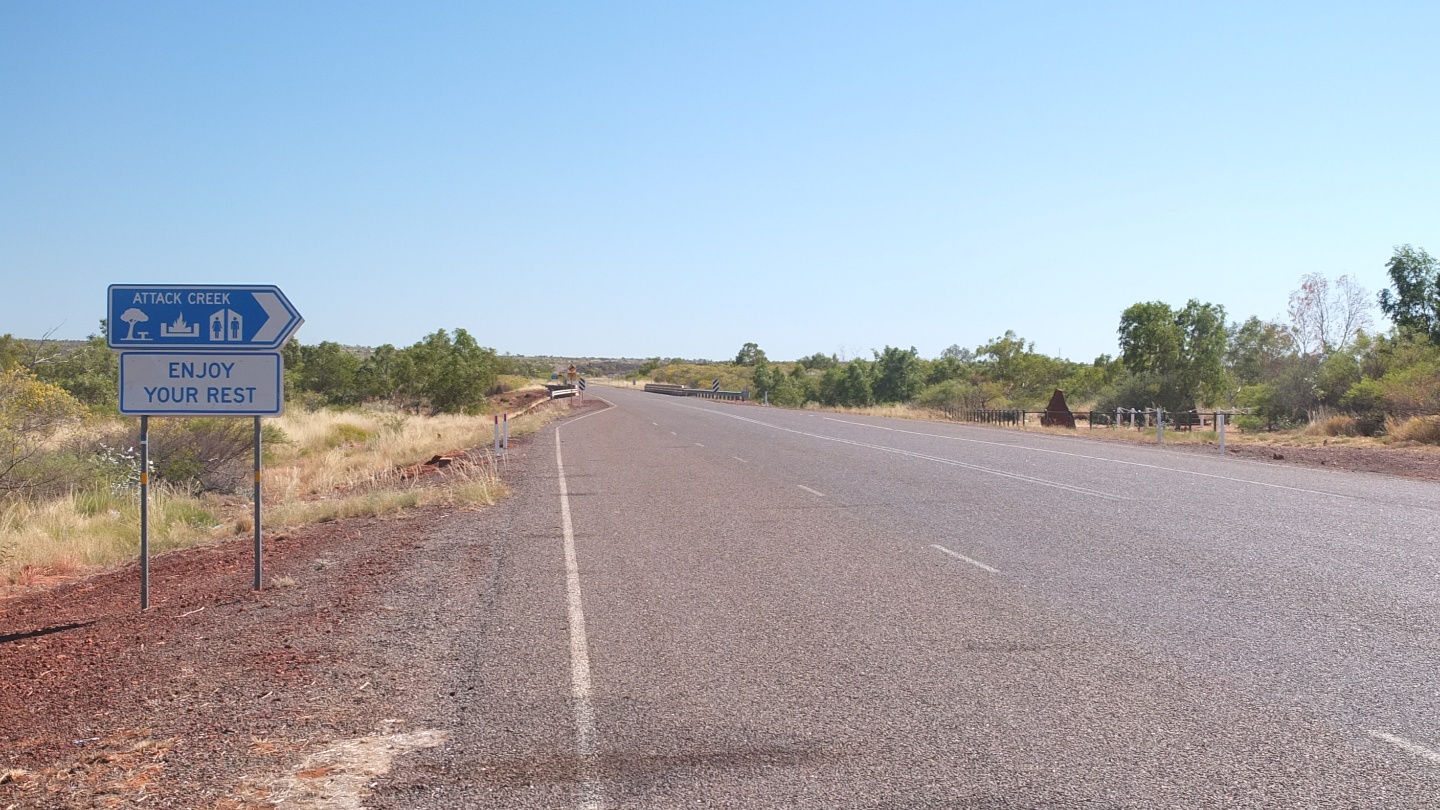 And that’s 60km. Attack Creek rest area. Yes, I will enjoy my rest, my lunch and maybe a night. Why that name, Attack Creek? When the white men were on expedition from South to north Australia, Aboriginal that never seen any white men plus on horses, contacted the communities around. They described the explorers troop as a white snake sent by their enemy to destroy them. When the whitemen came to that special place there were court in a fight. 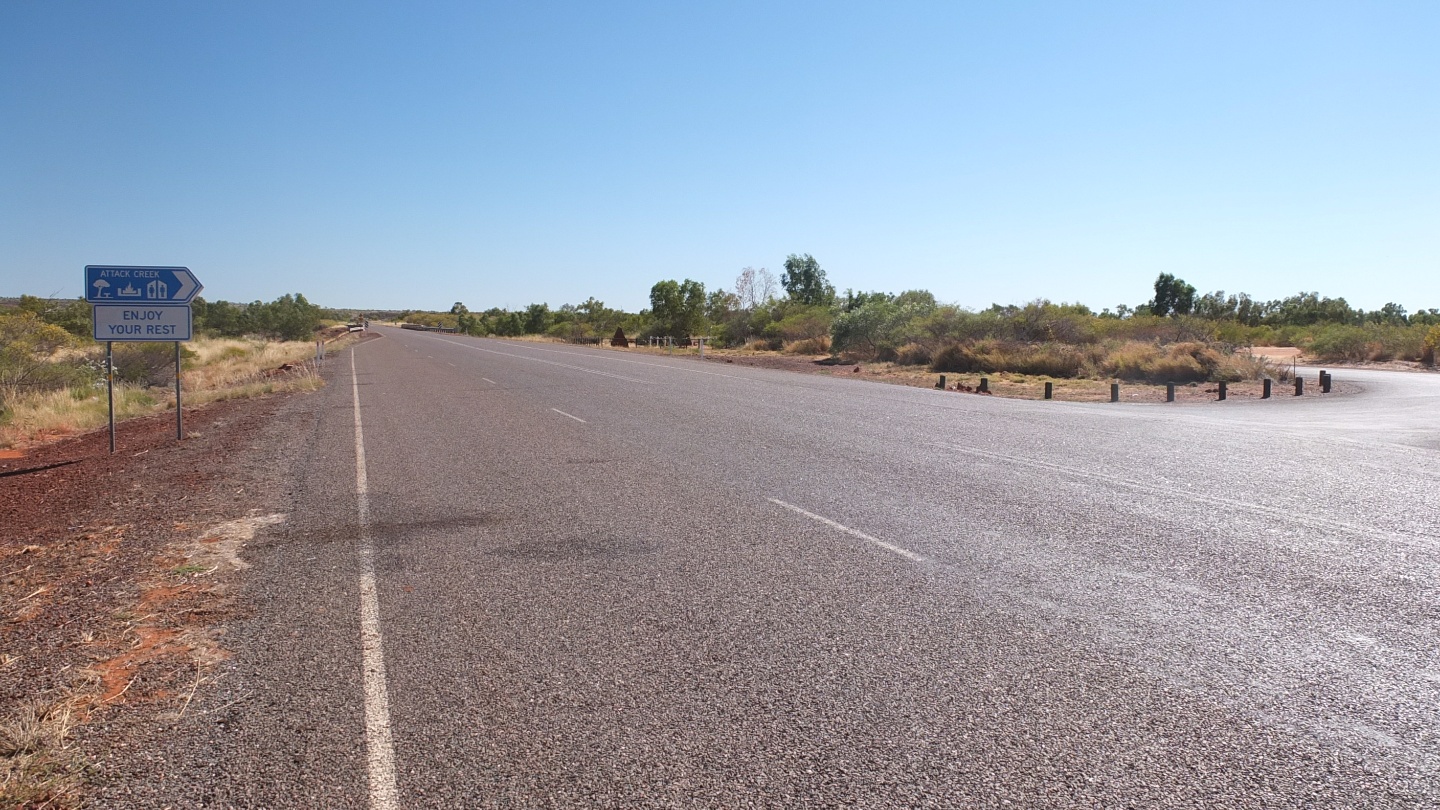 Just a wider view to see the rest area entrance. 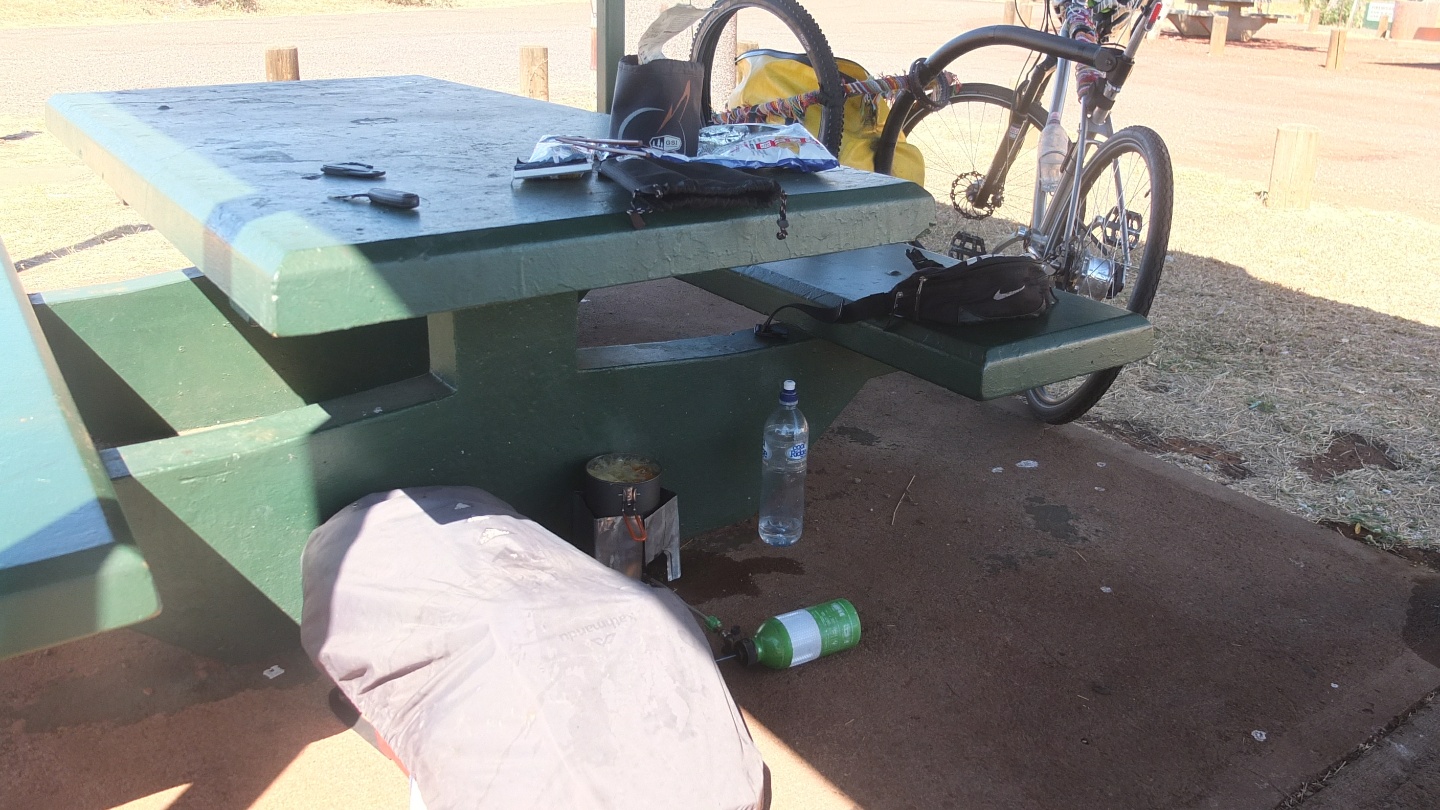 It’s still windy today and I’ve tried to get out of the wind for cooking. 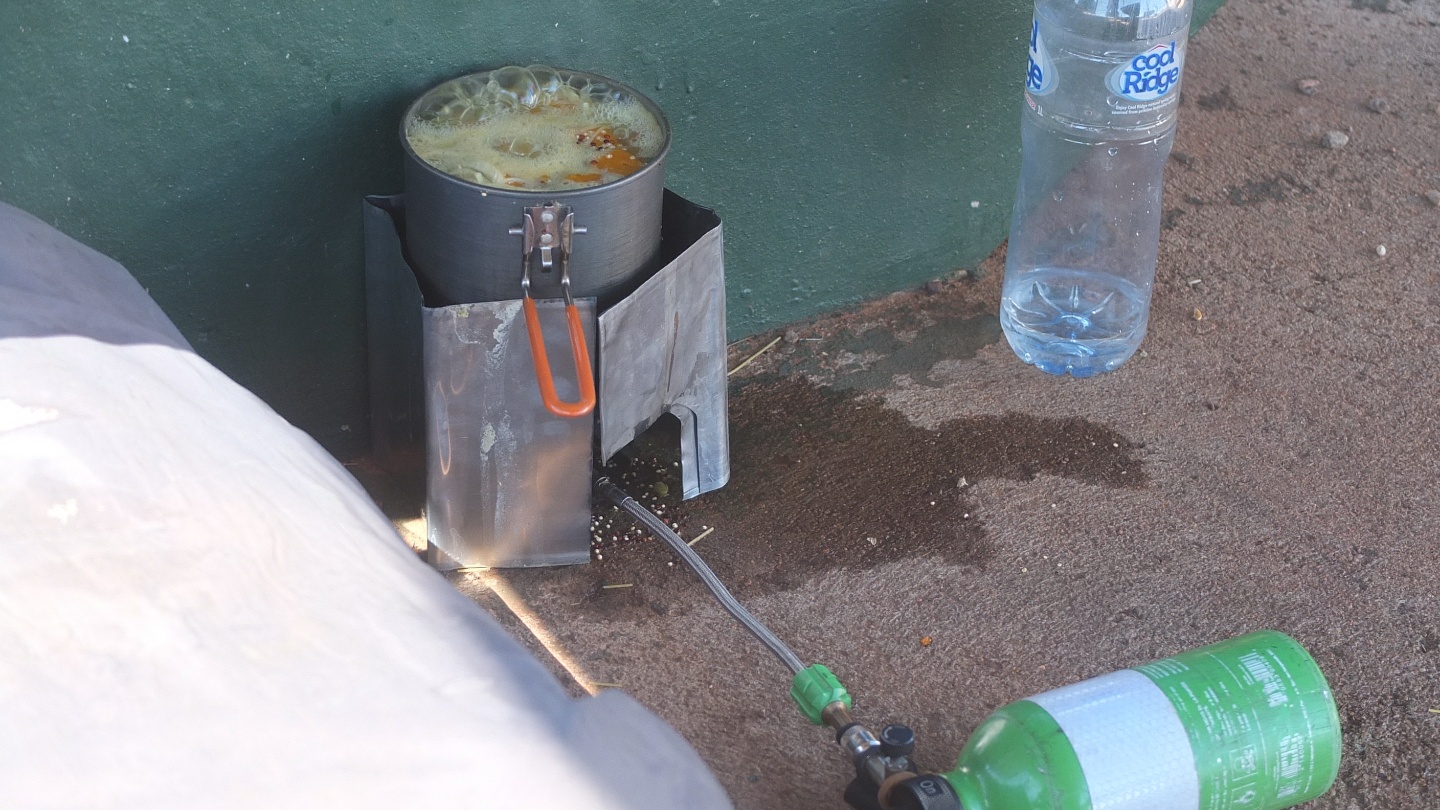 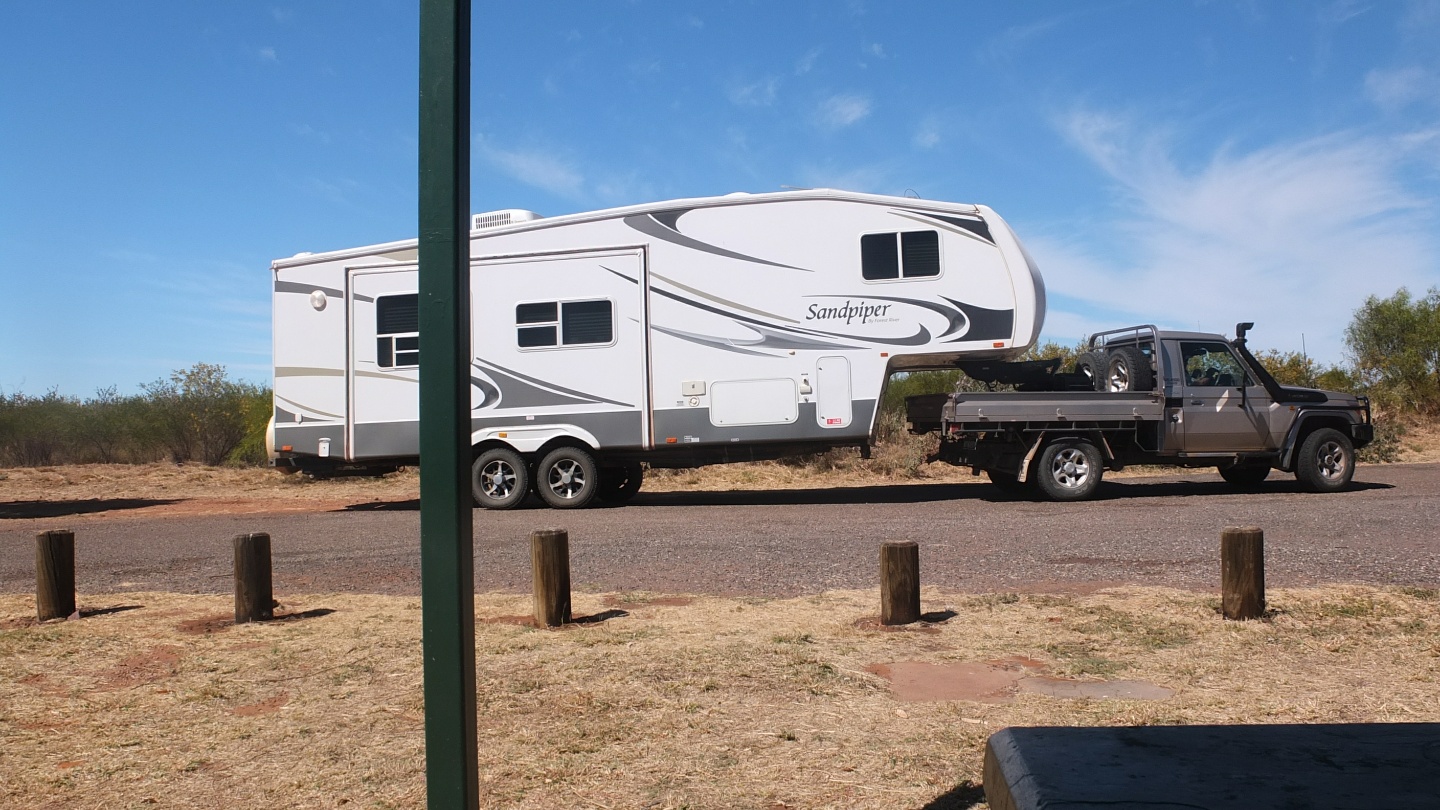 I can see some people who does not have the same standard for “adventure”. This caravan is huge! Even the side wall opens itself like a metre wide. Crazy! 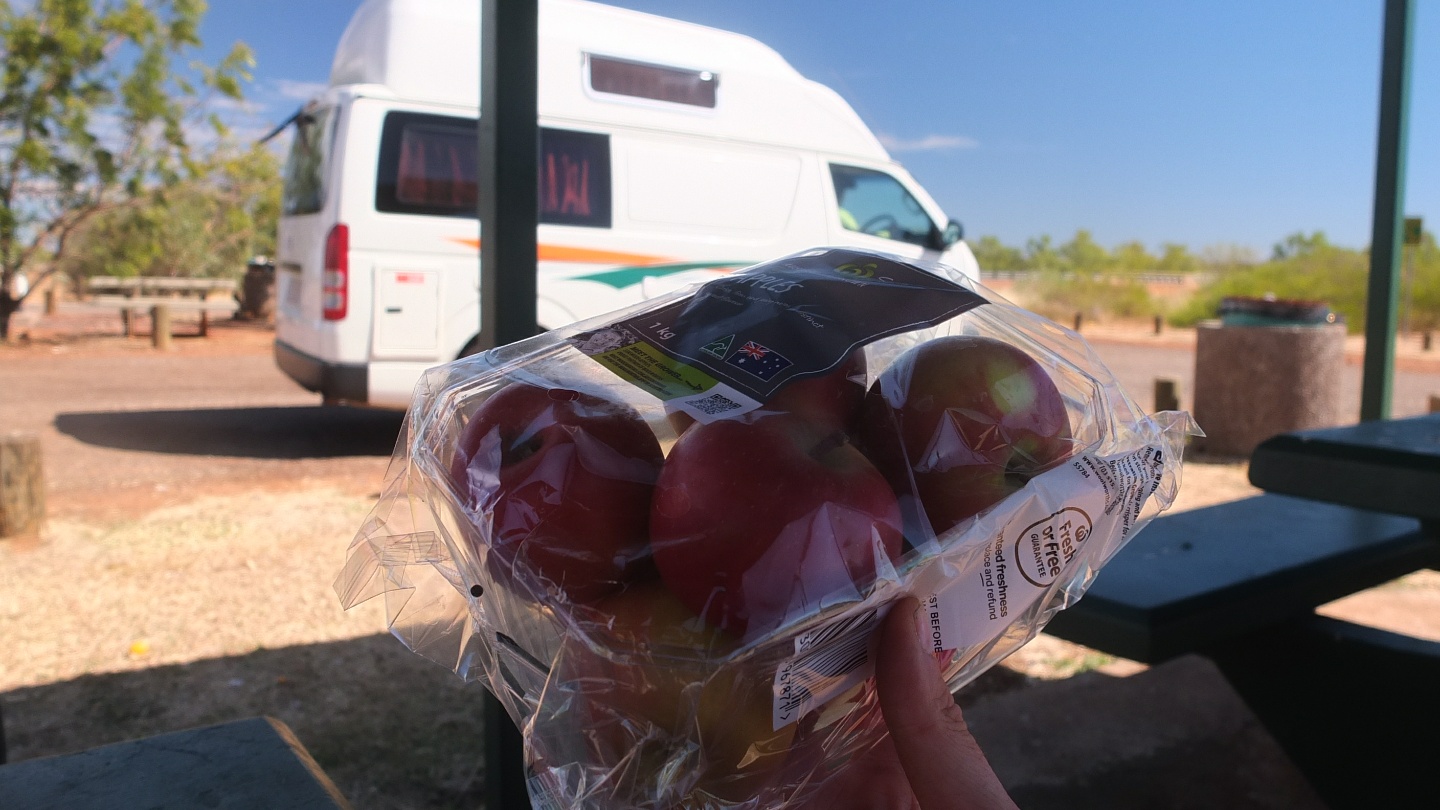 I was eating my delicious lunch when a couple came out from the rented van on the background. The woman came to me and gave me that kilogram of apples. They bought four packs like this and could not fit the last one. I don’t know yet if I will be able to fit that one in my bag but I will try! no waste! Those apples are very good, Fuji Apples. It’s like a mix between an apple and a pear. 70% apple, 30% pear. Kind of the opposite as the nashi pear. Thanks guys! 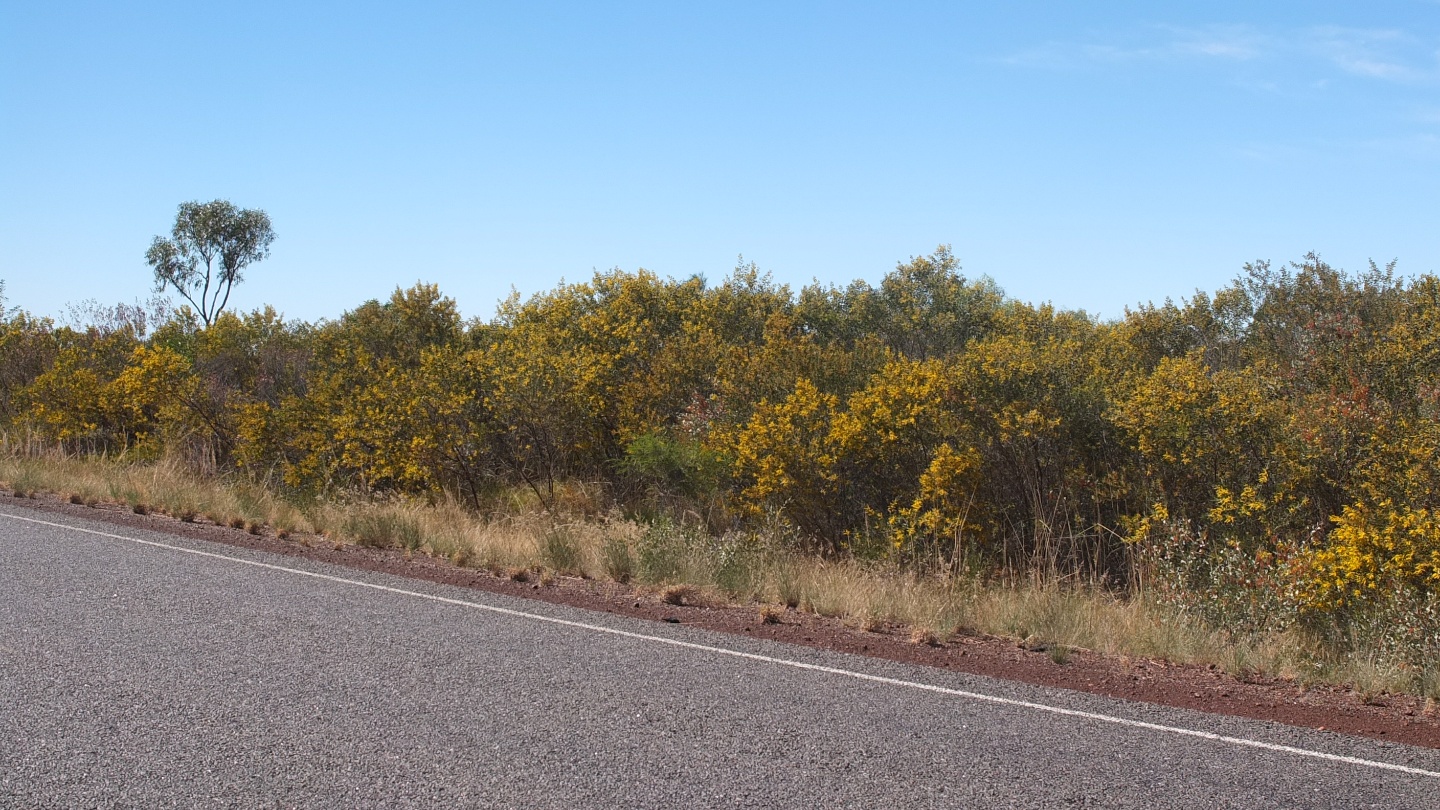 Finally, I’m on the road again. It’s only 2pm and I did not know what to do. I thought cycling would be a good idea ;-) And that rest area was dirty and dusty. I did not like it. There is lots of “Mimosa” along the road now, smells good :-) 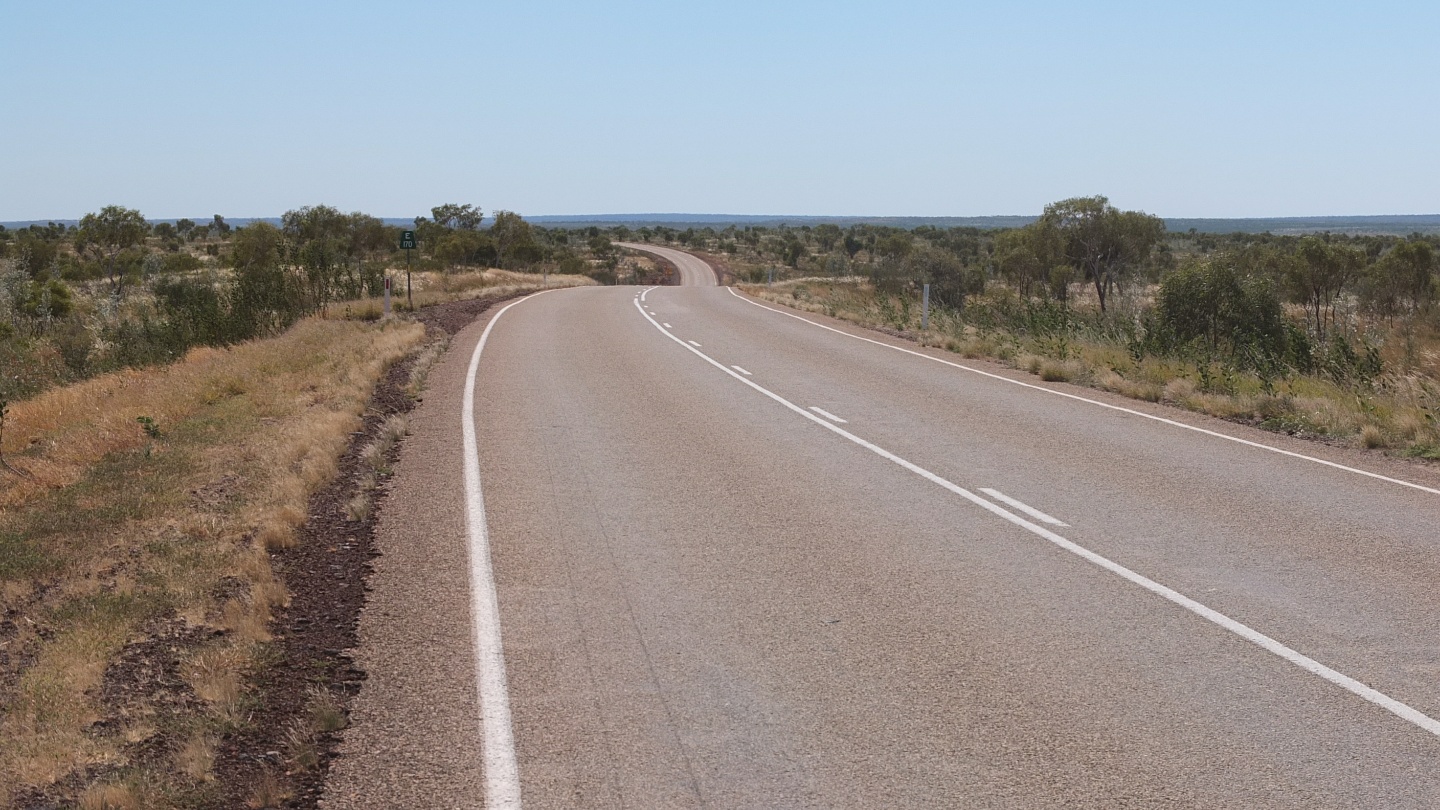 A closer look. That’s a bit hilly as well, better to appreciate the view. 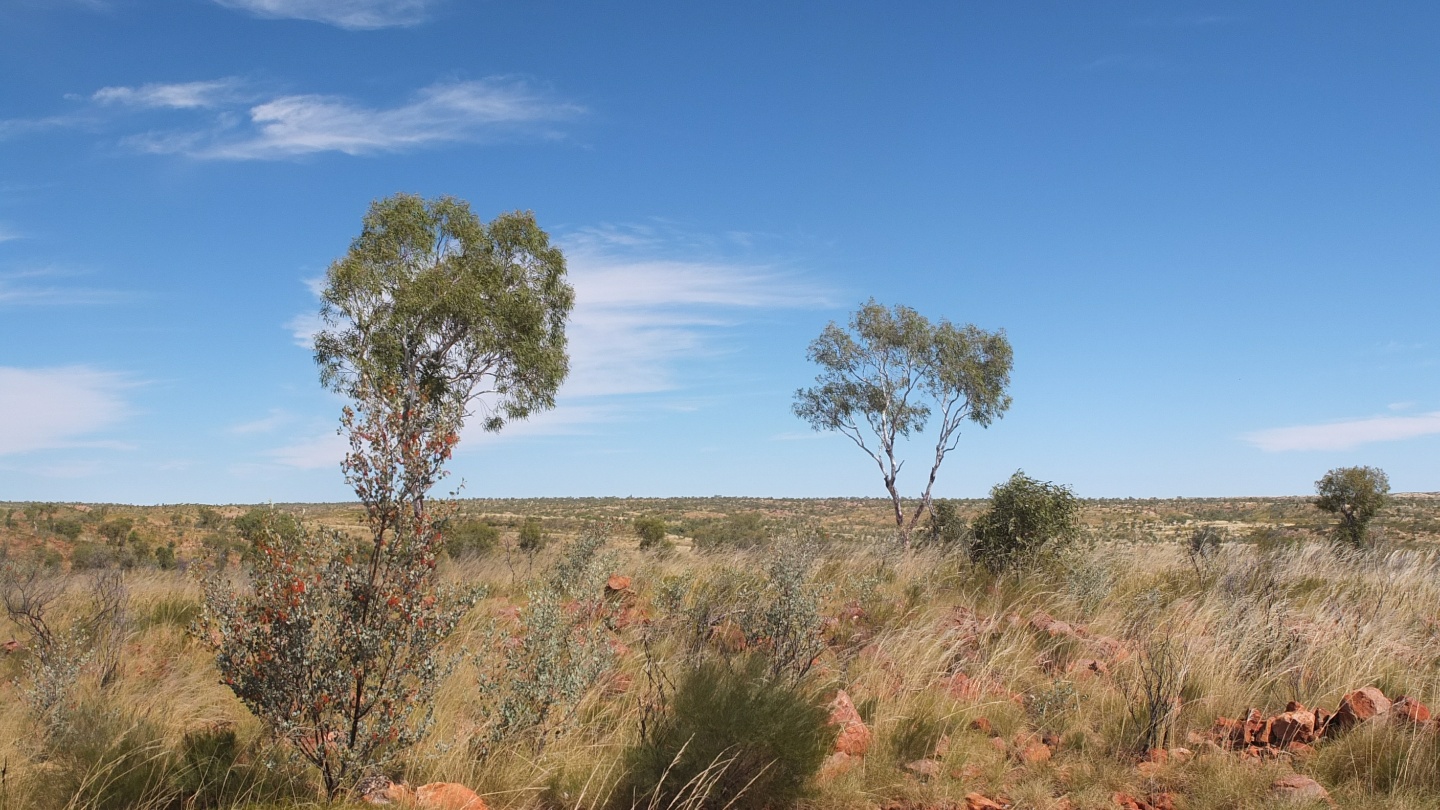 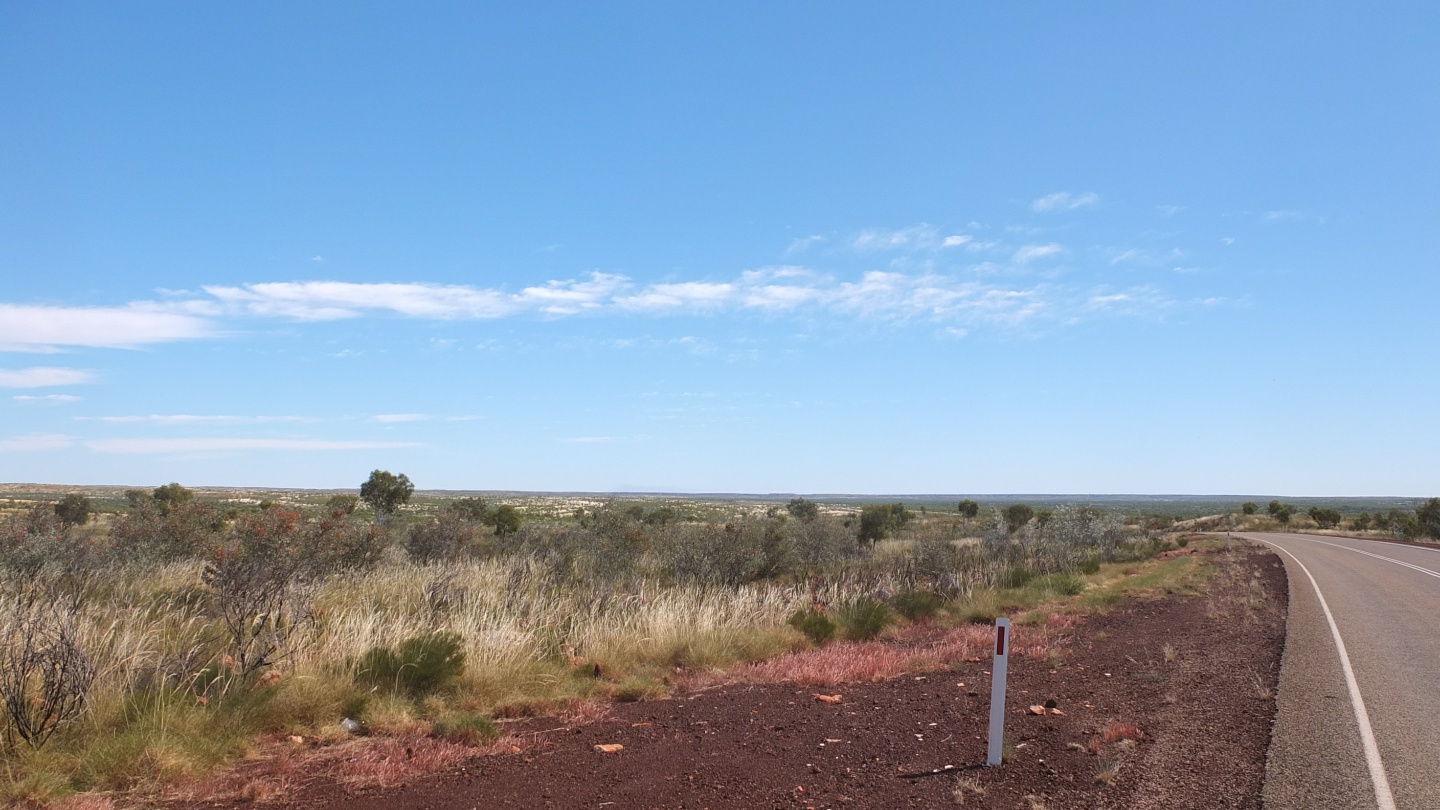 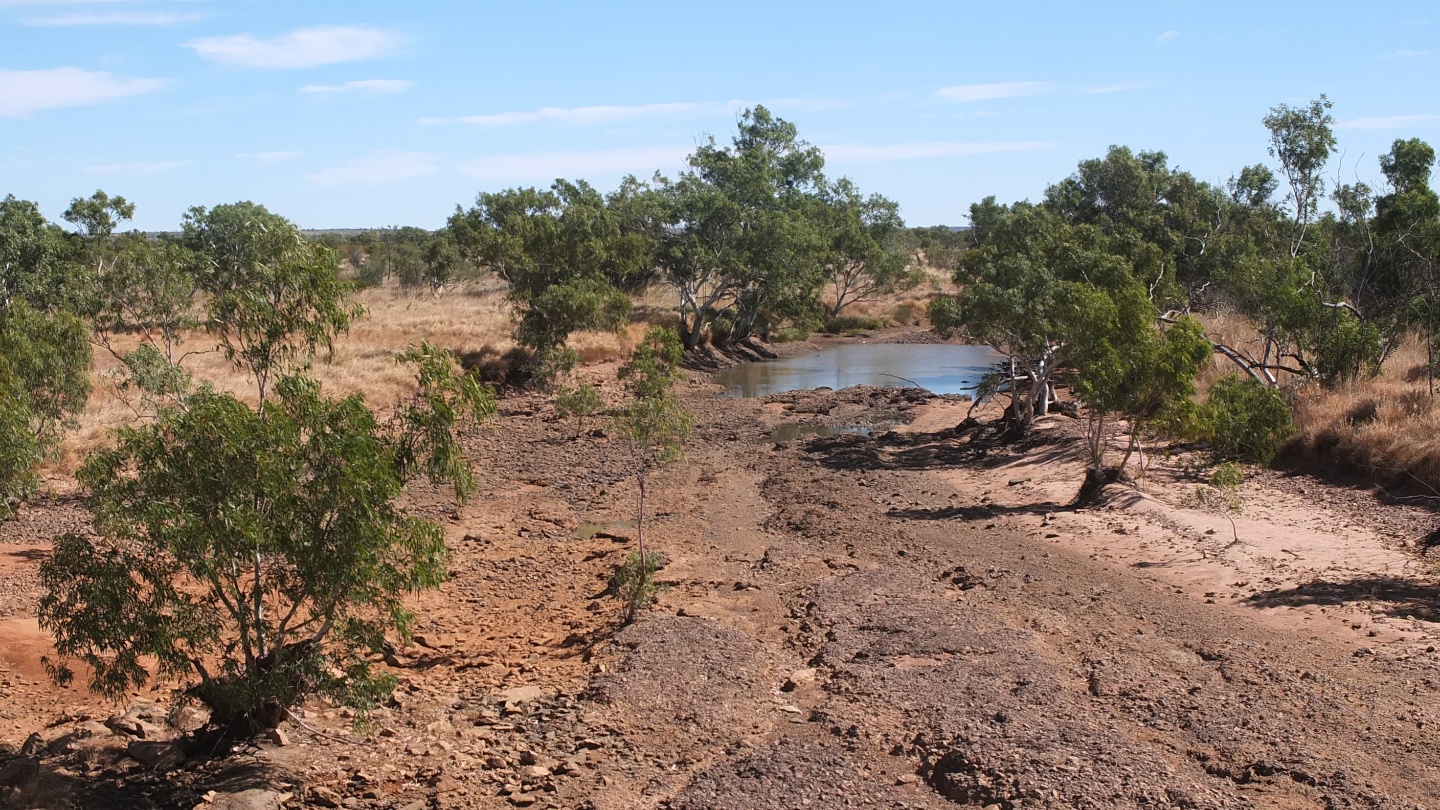 I’m now crossing a creek and like the Tennant creek, there is a bit of water in it. The landscape is definitely changing. 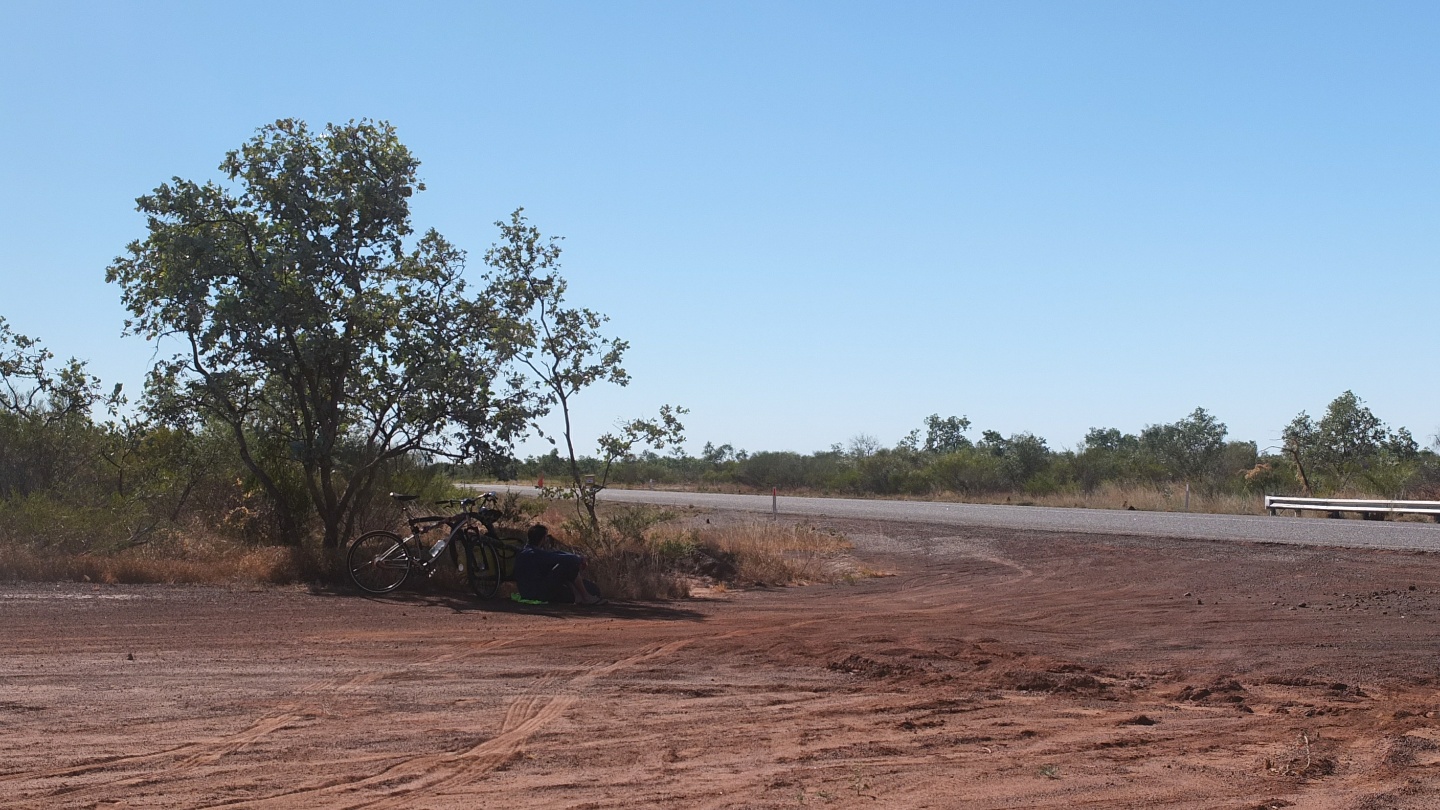 This is another break, 80km. Lucky I found some shade under that tree. 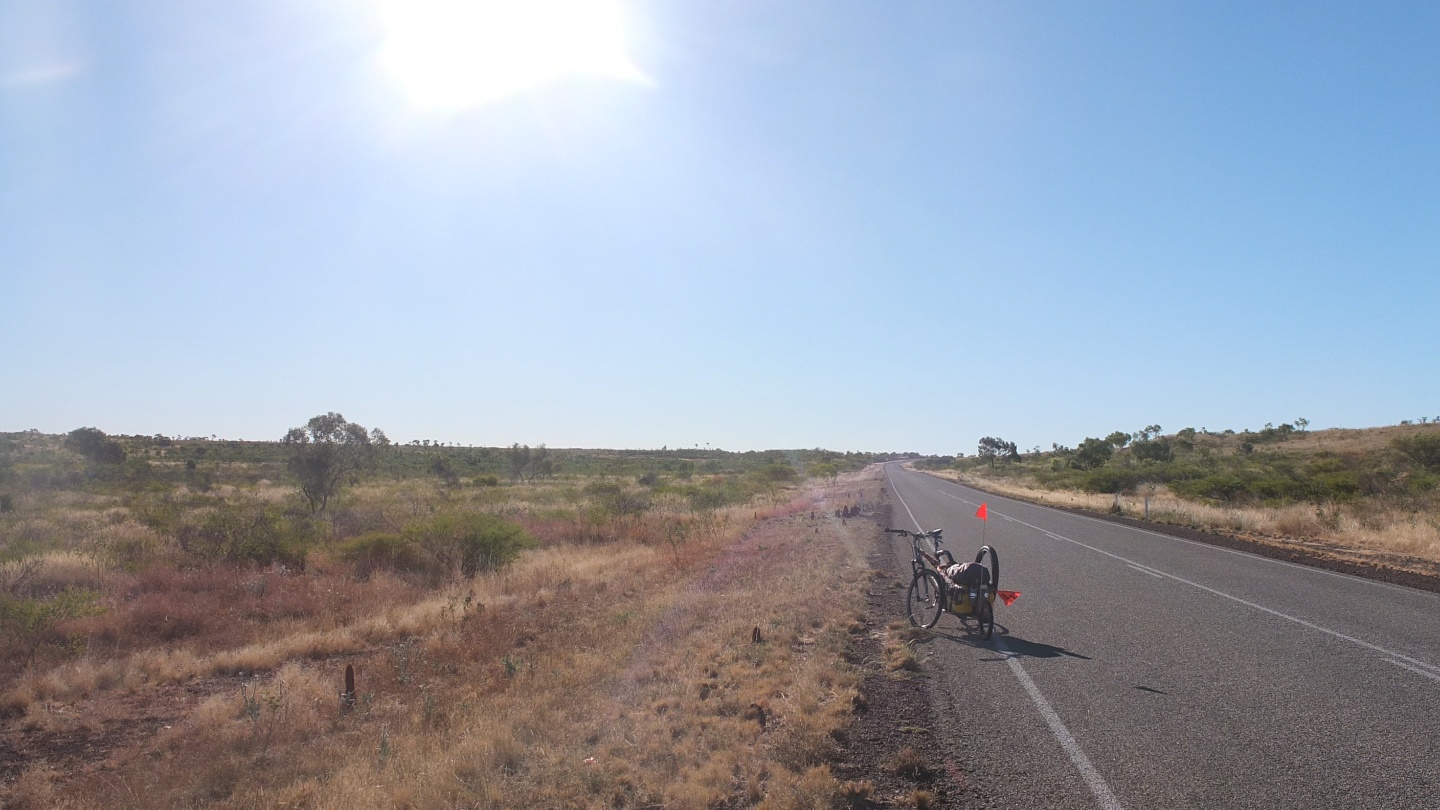 Back on the road! Wop Wop, wait a second, I’ve seen something interesting. 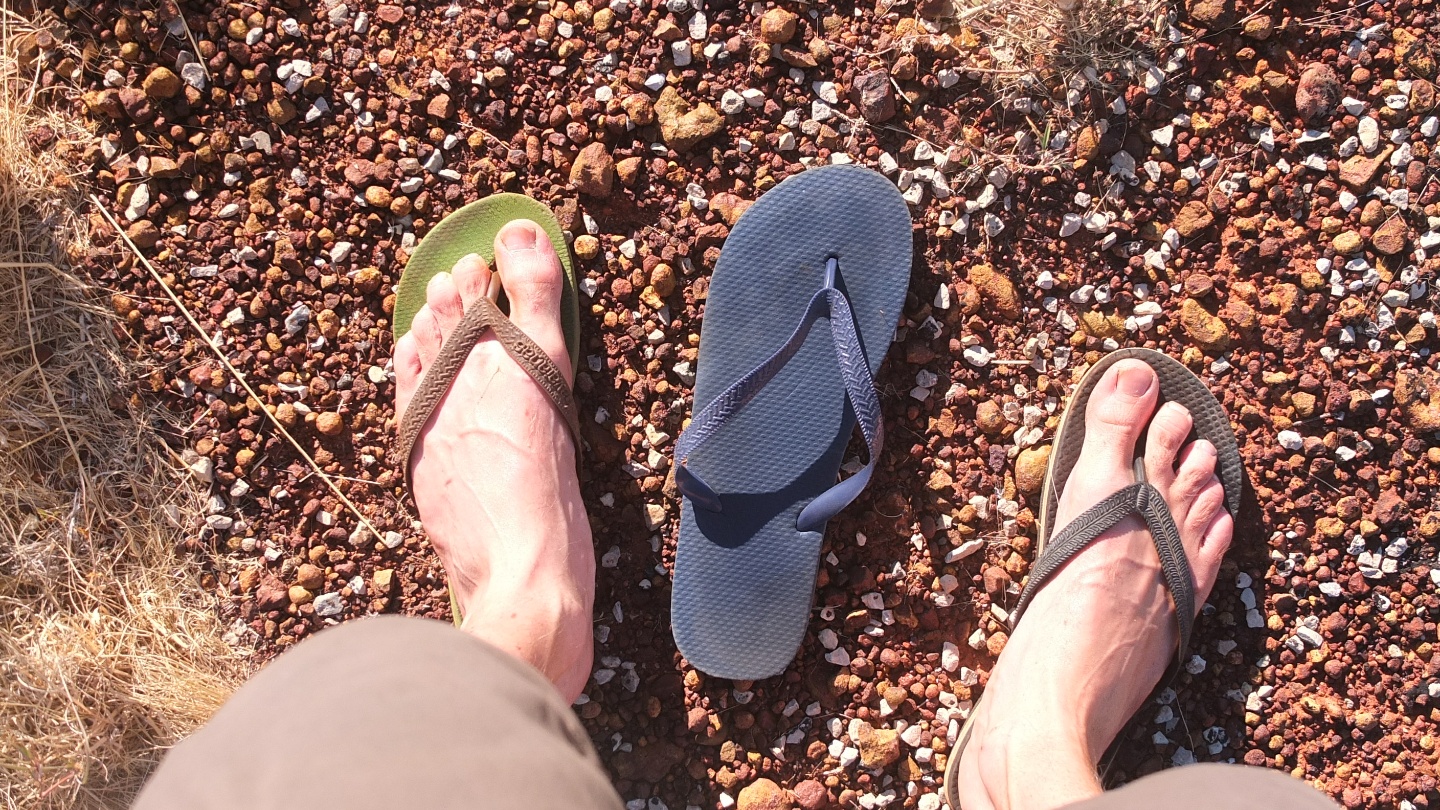 A thong! my size, the left one (the one I need to replace). Looks good! I will take it a do some walking test around before chucking the other one. If it along the road, there is maybe a reason.

On my 100km break, I was on the side of the road when a hippie couple, in an hippie van, listening certainly some hippie music passed front of me. The van slowed down and the woman shouted at me: “Are you okay?, Do you want some water?, a fresh beer?”. I shouted back: “Thanks. I’m fine :-)” The van went a bit further and turned around quickly, lifting some dust around. The couple came back to me and the woman said: “I’ve just said (talking to her hippie boyfriend), “imagine if we would see a push rider here. He would have done such a long way”. She looked at me and said “And there you are! Crazy! Do you want a fresh beer?”. ” Thanks guys, I’ve got plenty of water and don’t drink beer :-).” We had a short nice chat and they were gone. I finished my stretching quietly And I was back on the road. 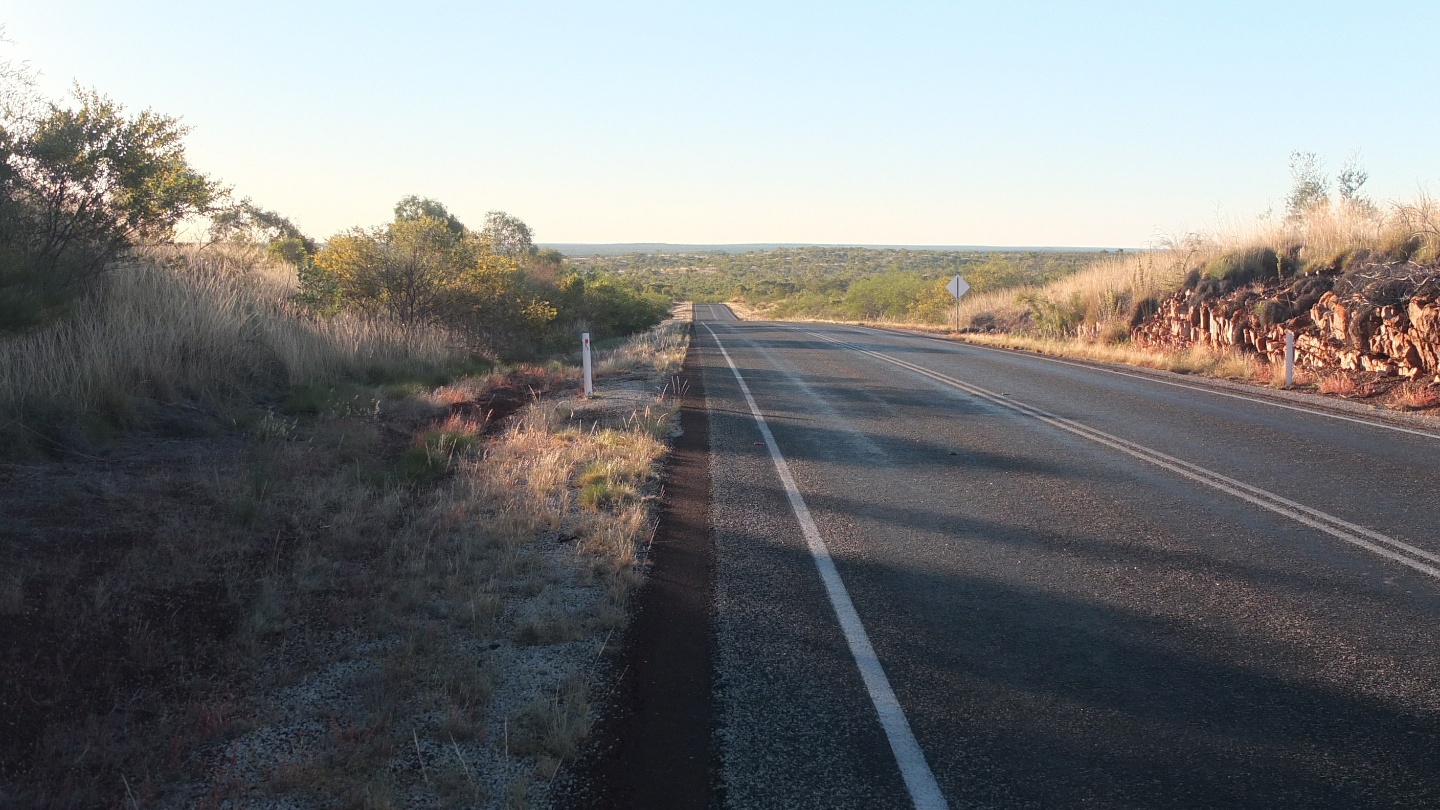 And few more hills :-) I’ve done about 115km already. I’m so motivated to break my record which is 121km. I’ve done that from Possum Valley to Freshwater and I did not have my trailer. I’ll smash my own record today, no doubt :-) 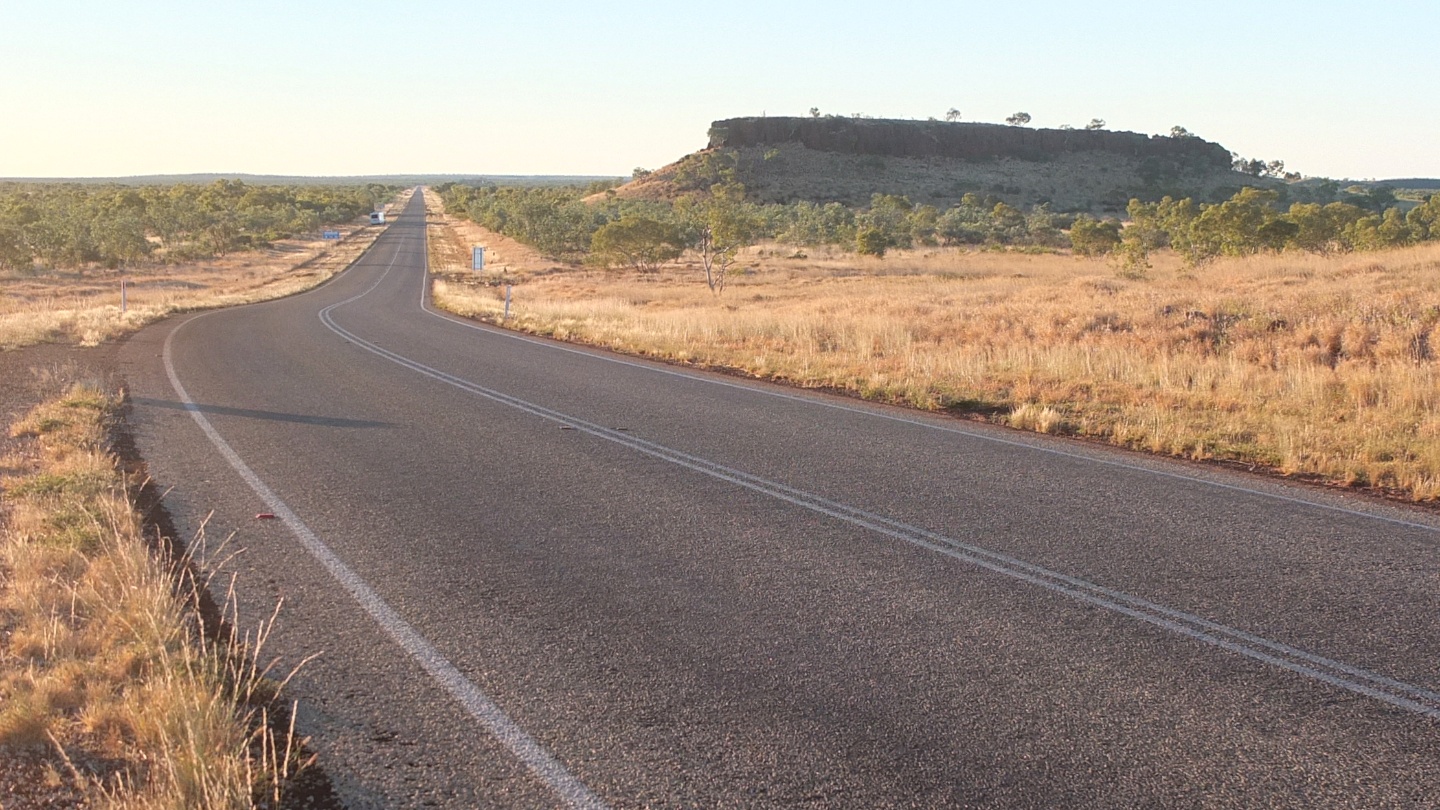 Ohhh, something different here. I’ve done 144km now! 6 to go and I’m in Runner Springs! Thanks to the wind today! 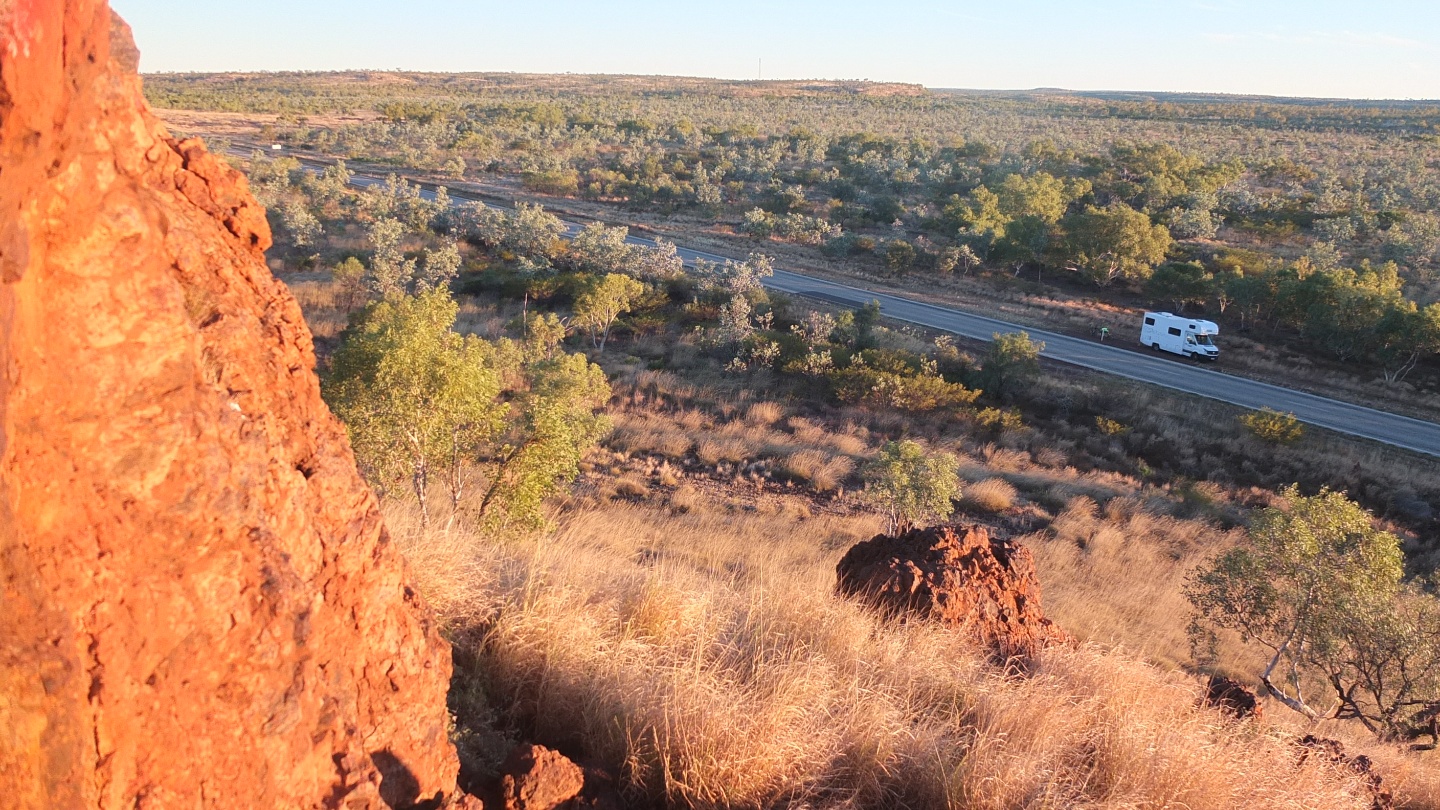 What happenning now? I was going downhill when a woman was like waiting for me just on the side of the road with something in her hand. I slowed down and she asked: 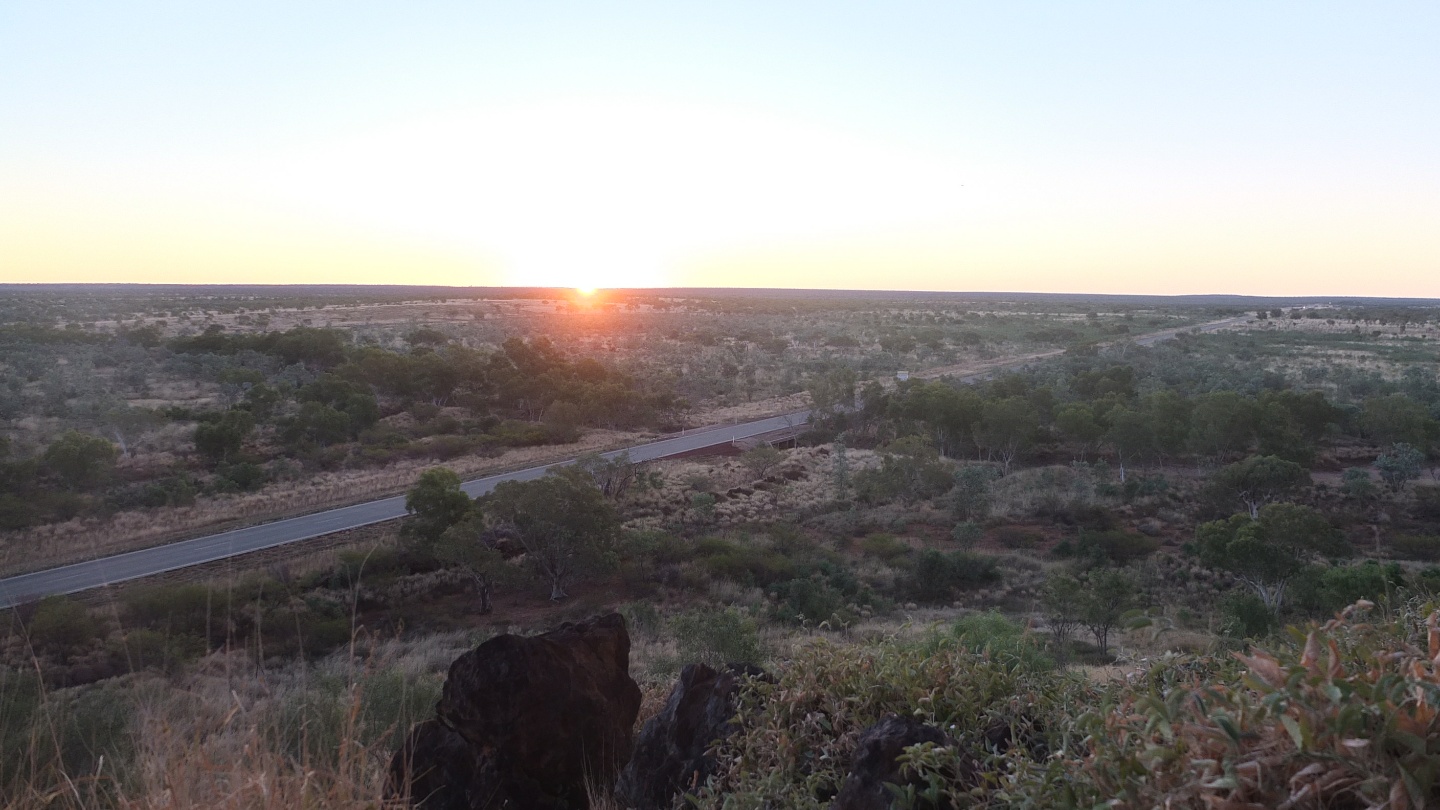 And here we are watching the sunset, having a drink and some chips :-) 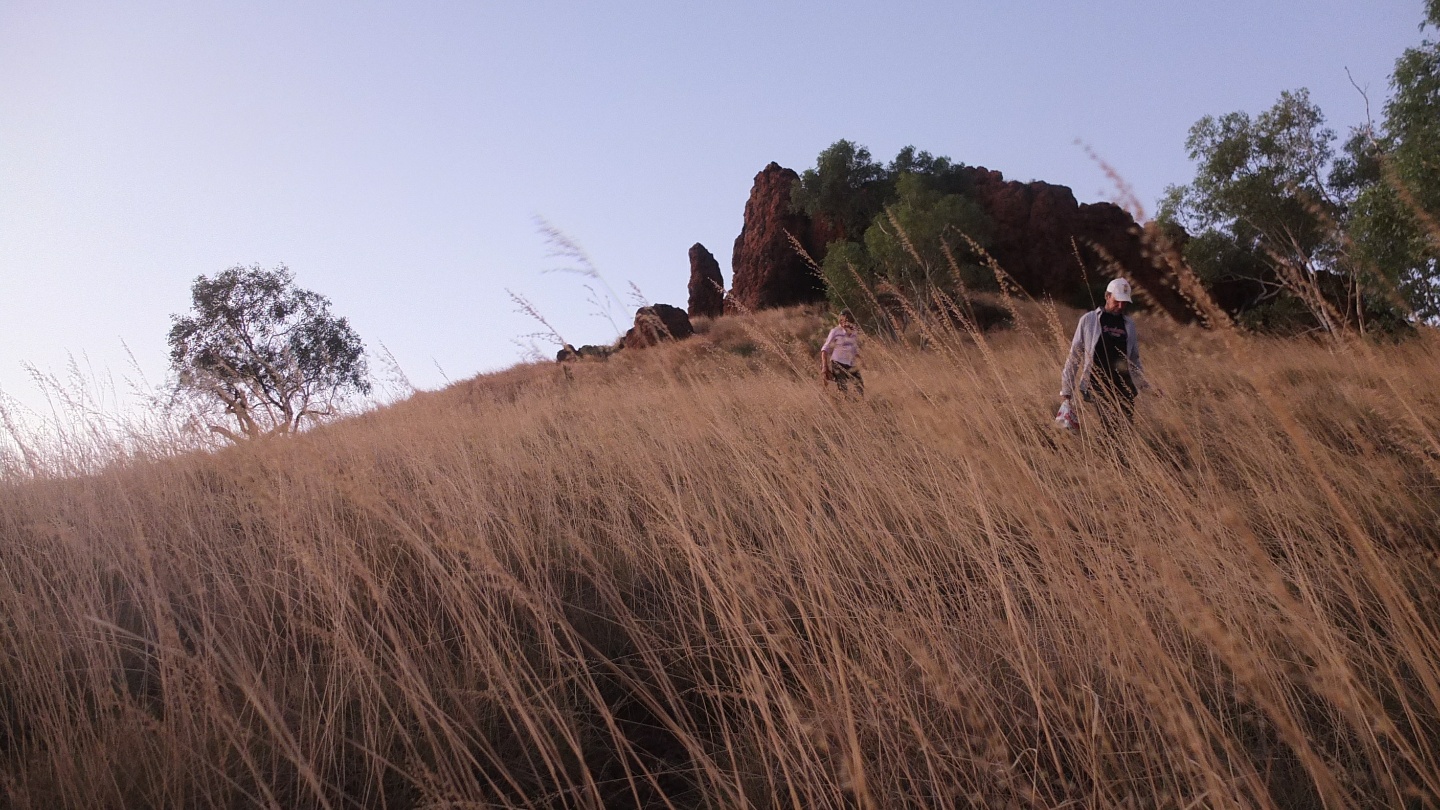 Trish, Henry and I are now walking dowon to our respective vehicules. They booked a night in the Runner Spring campsite and I don’t know yet where I will stay tonight. 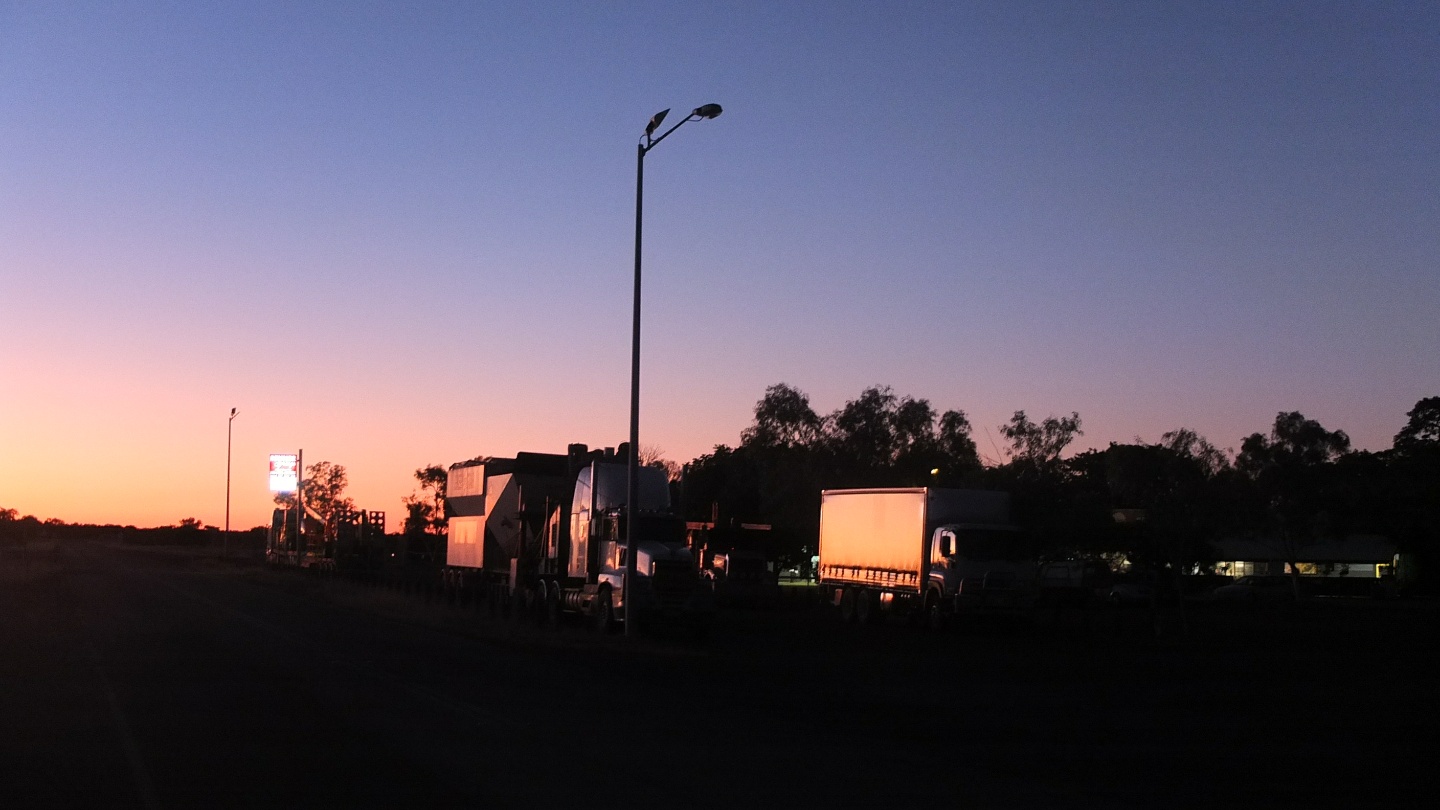 When I got there, this was only 5km, the light is low. I went to the roadhouse to buy some chips (I deserve that after 150km!). During I was waiting, I’ve seen Hendri again who invited me for dinner. Well, good :-) We have spend the evening in their caravan and they told me everything (too much to remember all) about Bali as they are going their for the fifth or sixth time! They know some words and basic sentences and warned me about things I should pay attention to like:

Later on after dinner, I came out of the campsite, got my bike and cycle just on the opposite side of the road where I pitch my tent for the night. I hope I won’t get disturbe by anyone :-) Good night!