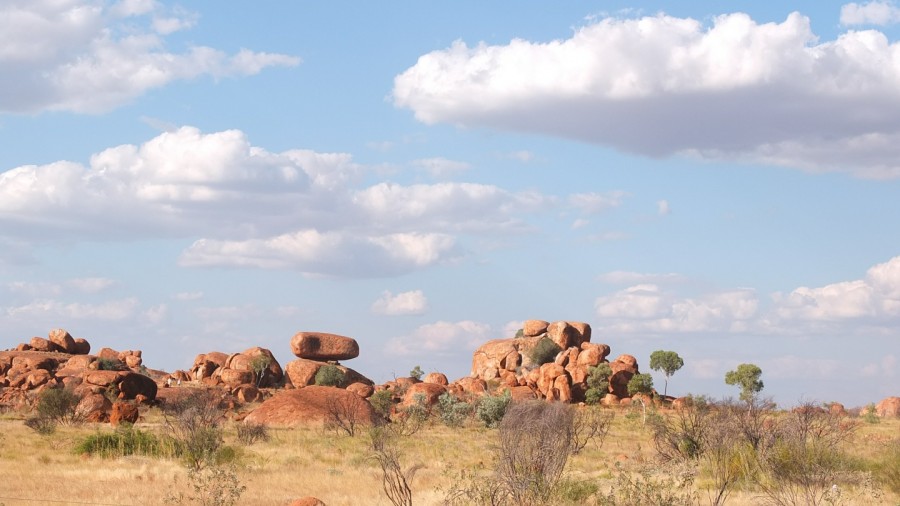 Pretty quick cycling today as I’ve got no wind to bother me and I’ve started early this morning to avoid the heat. During a long lunch time I got involved with an Aboriginal woman who wanted me to buy alcohol for her (with her money). Another guy came for the same purpose until I found the solution to eclipse myself and hit the road again. I arrived early in Karlu Karlu camping area which is a nice one from what I’ve read online.

Elevation. Looks like this road is mainly downhill? I’ve never felt that… :-)

I’m off and before 8am! This is very good. I wanted to start before the sunrise but it’s too quick. This morning I’ve spent my breakfast with the Australian couple. Wendy (the wife) made me some hot tea and gave me a packet of biscuits. She knows me well already :-) 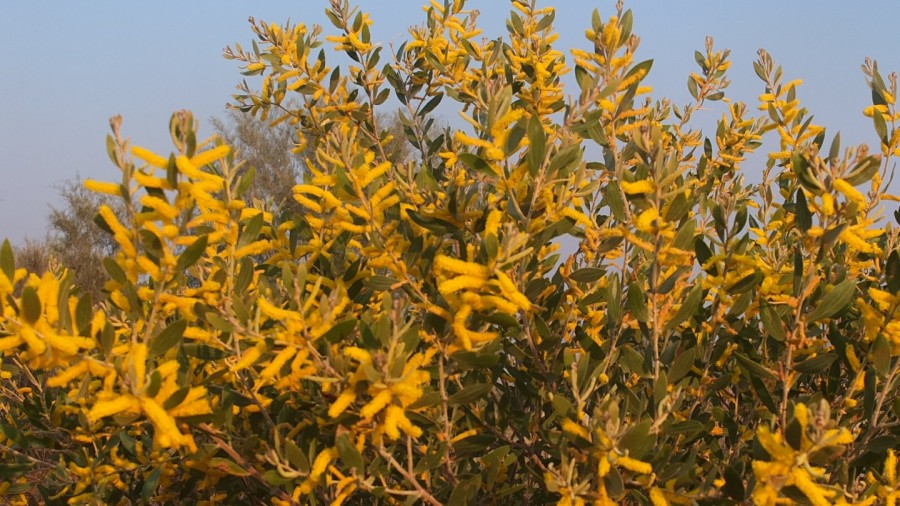 Along the road today there is a lot of Mimosa. I’m not sure if these are but they smell like mimosa. This is nice! 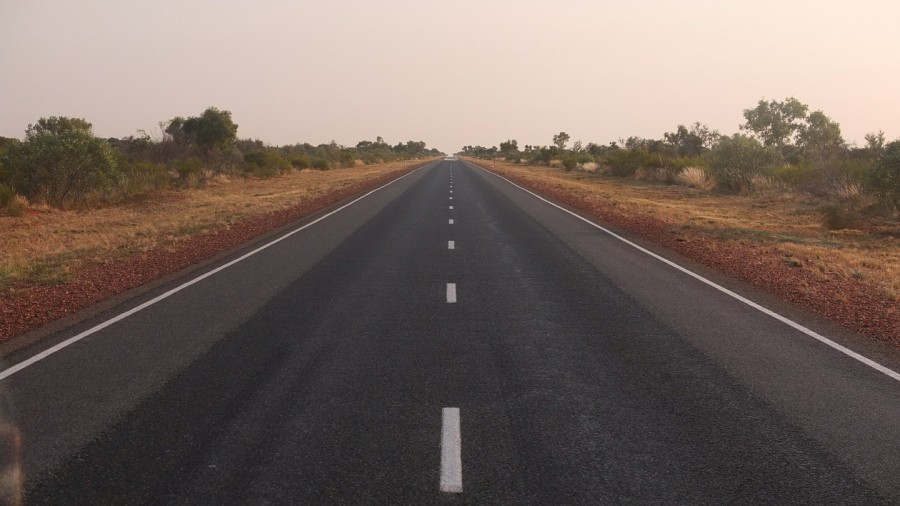 The first 20km break time and as you see, a very high traffic and lots of turns ;-) 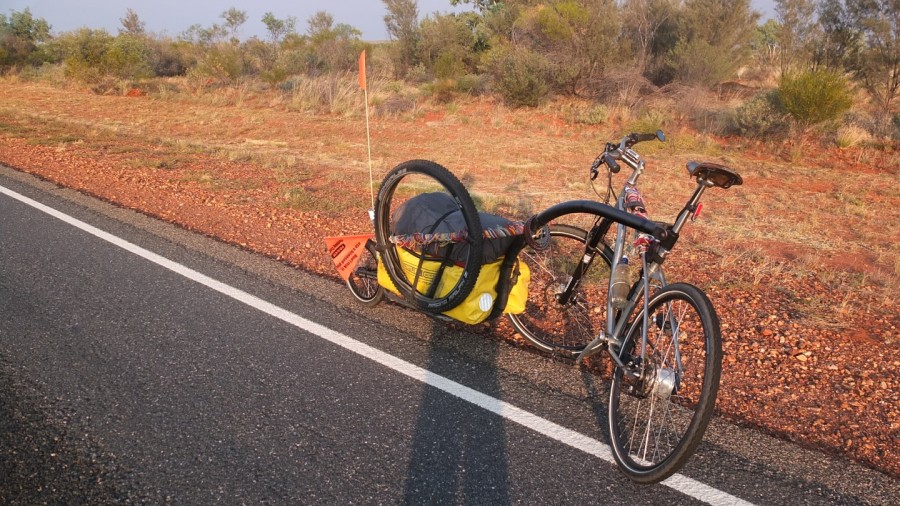 My machine is still working very well :-) I’ve changed the position of my tyres. I’ve wrapped the road one in the MTB as they are bigger. That way, I don’t bend them. 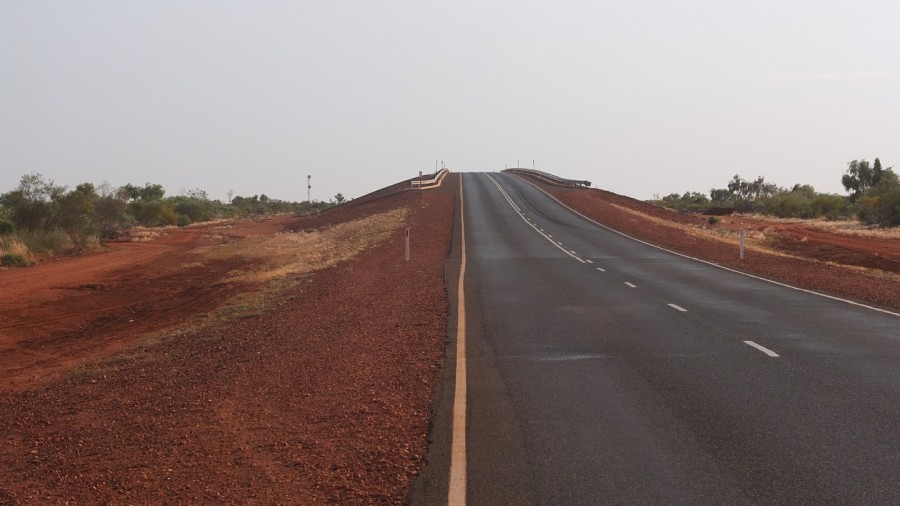 Nearly 20km again, on that looong empty road, there is a bridge! What?! haha 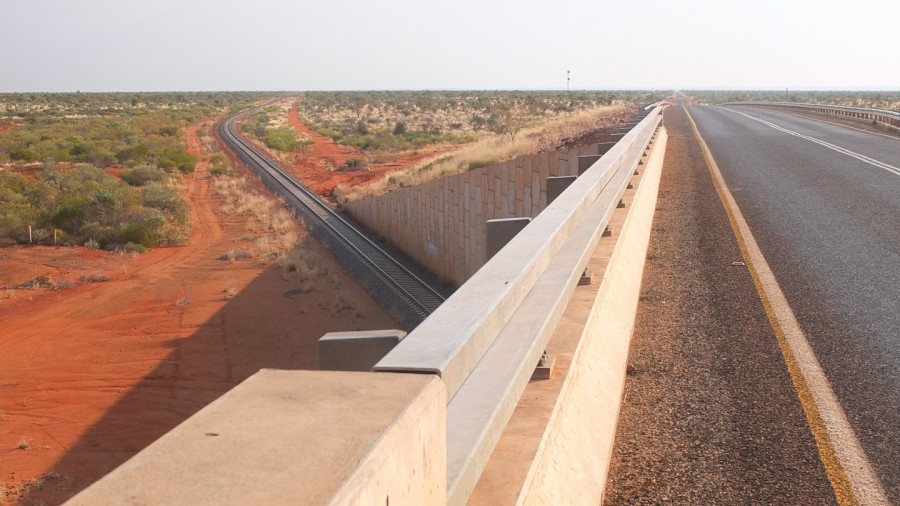 Yes! for the railway :-) Can you see the end of the road? So far away! 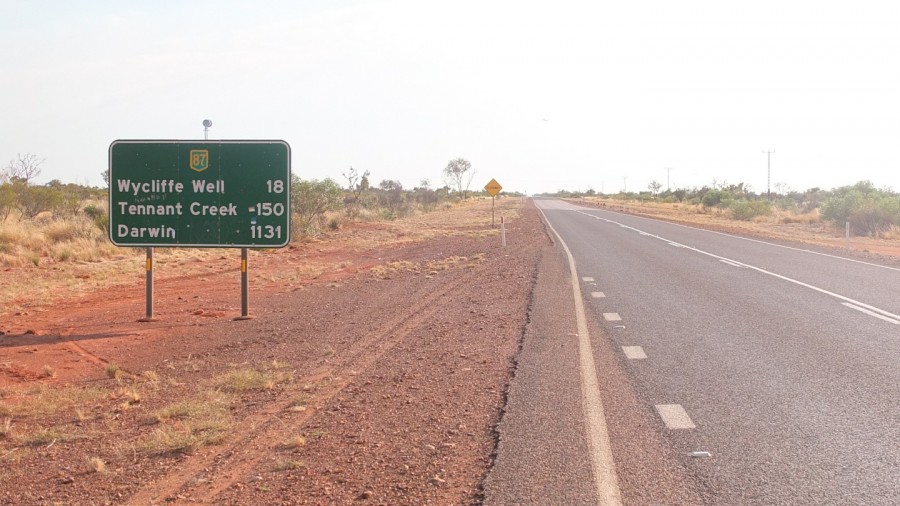 Darwin, 1131km. Too easy :-) a kilometre before the bridge I’ve seen 5 motorcyclists ride on the other side. One of them came back to see if I was fine, if I needed some tools. The guy is from Italy and his motorbike is loaded with stuff everywhere! Thanks to stop for me man :-) Even to come backwards for me! He also told me that he has seen 4 cyclists going to Darwin. One Japanese, one from England and a couple with Recumbent bikes. I’ve heard already about them when I was in Coober Pedy. At that time they were cycle back from Uluru. There is cyclists all around Australia :-) 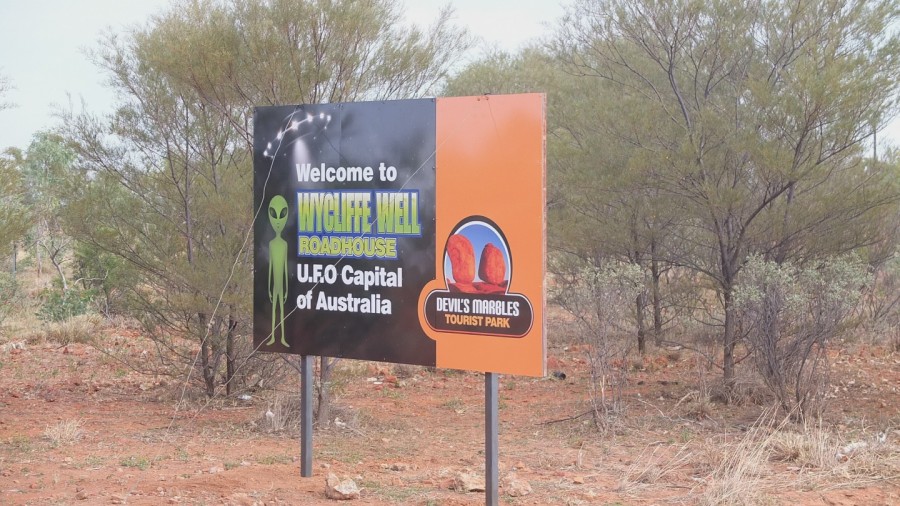 This is my next stop: the UFO Capital of Australia :-) 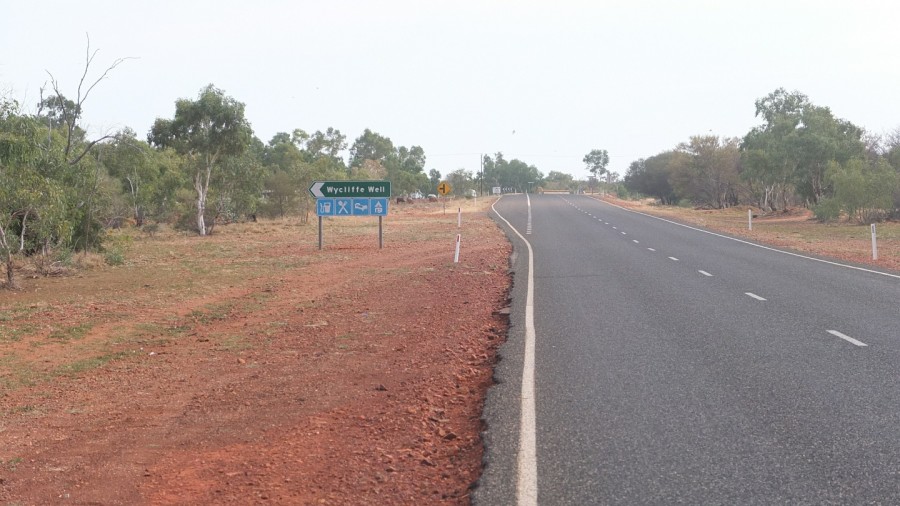 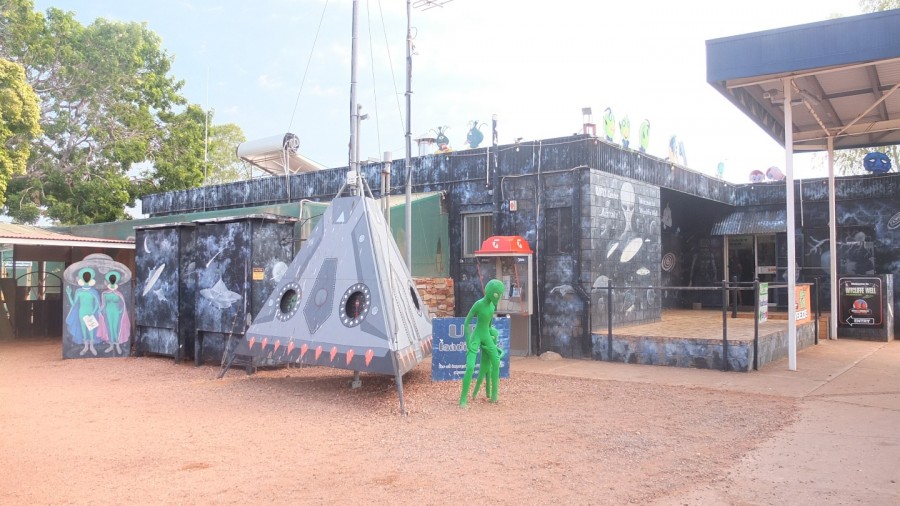 I’ve done 50km in 2 hours and just met the Australian couple from this morning. Wendy was so surprised to see me :-) “You are so fit, you are so fast!” hahaa. Easy when it’s flat! Hmmm, what is THIS place? 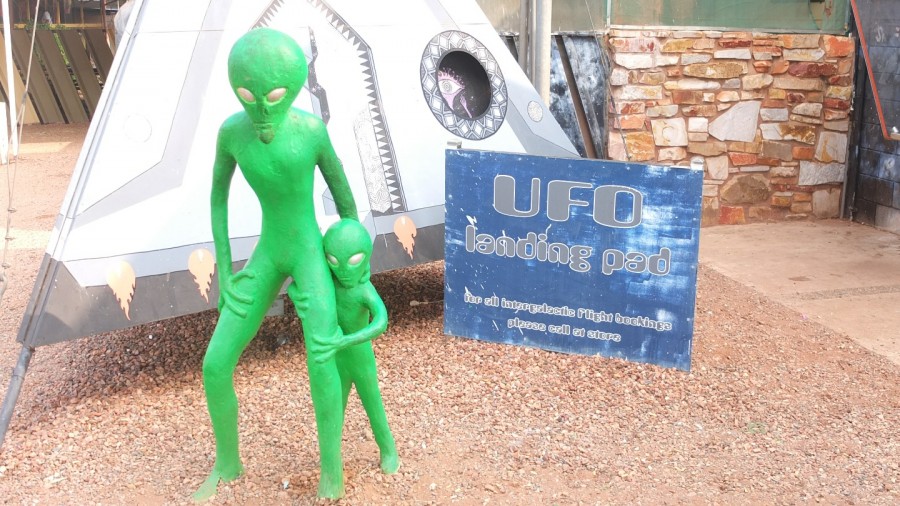 From what I’ve read around, this place is where they have seen the biggest amount of U.F.O in Australia. Well, I’d love to see one myself. 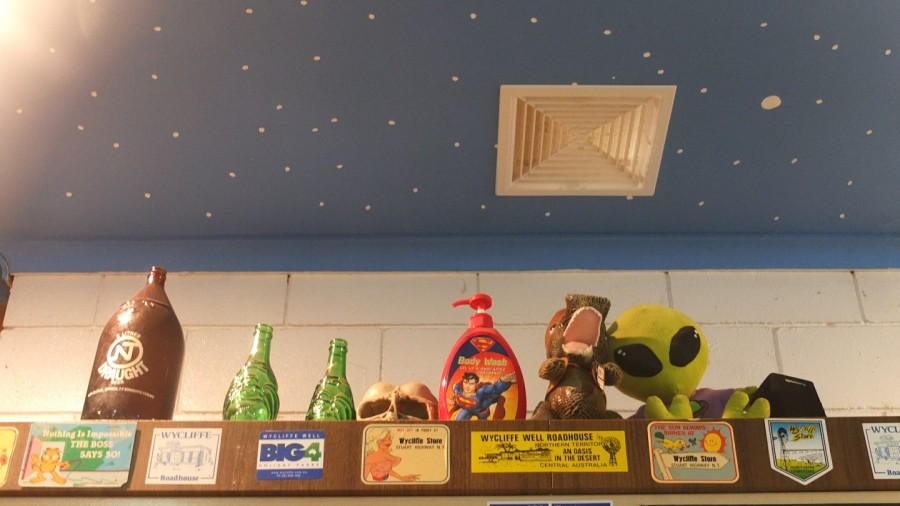 Even the inside is loaded with Alien stuff. They got a great tourist trap here. I’ve asked to a young woman who work here (certainly the owner’s daughter) how many U.F.O she has seen and she answer me with a smile: “a lot :-)”. 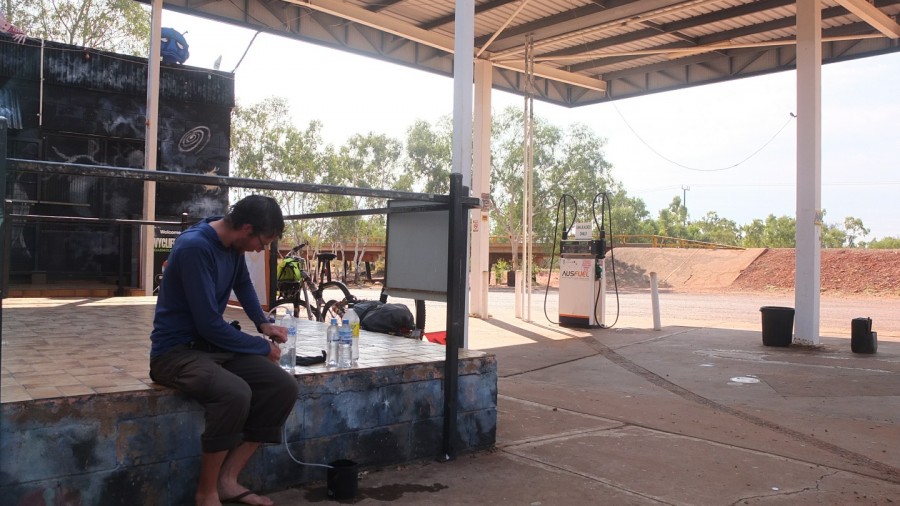 I did not see any U.F.O today but I’ve seen where I can get some water to fill my bottles. Let’s pump! 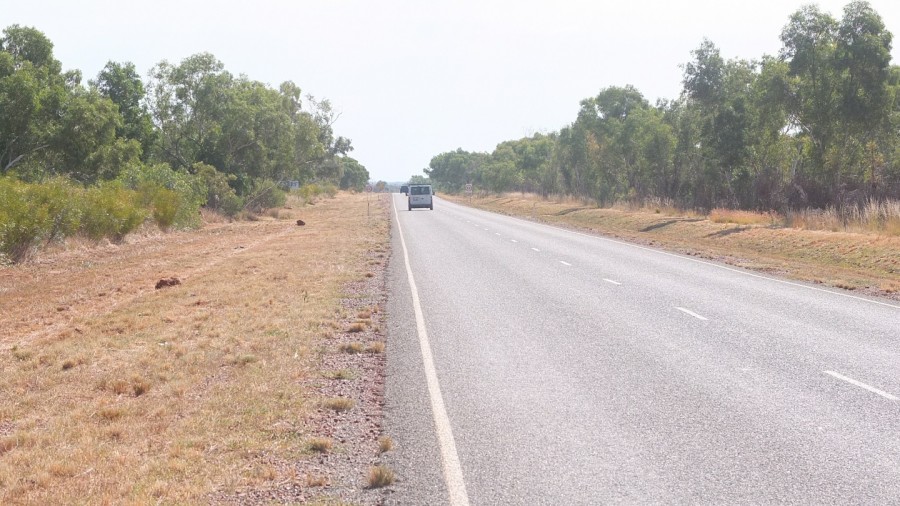 Back on the road for the second part of my trip. 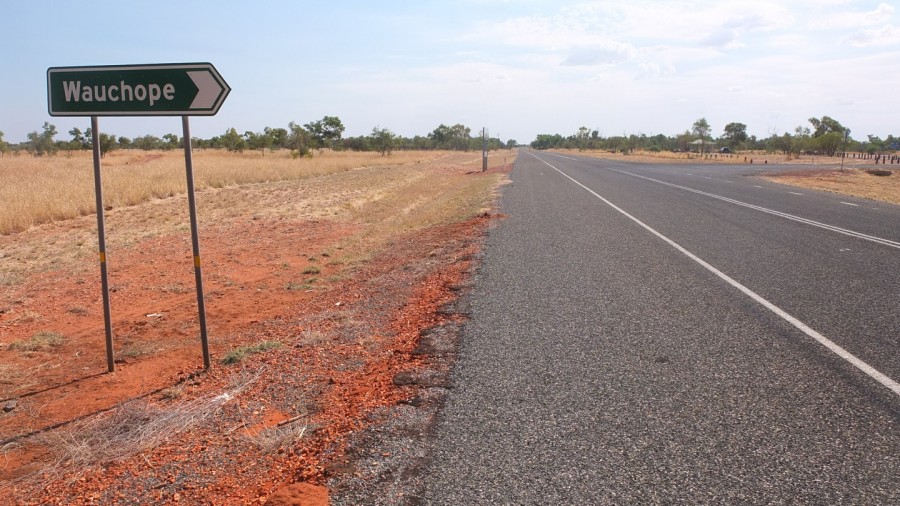 18km later, I’m coming to the second roadhouse where I will have my lunch. 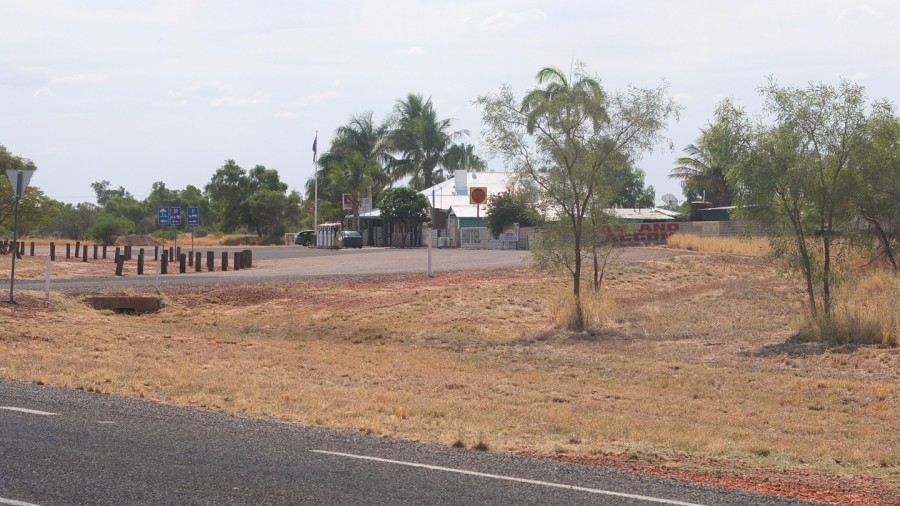 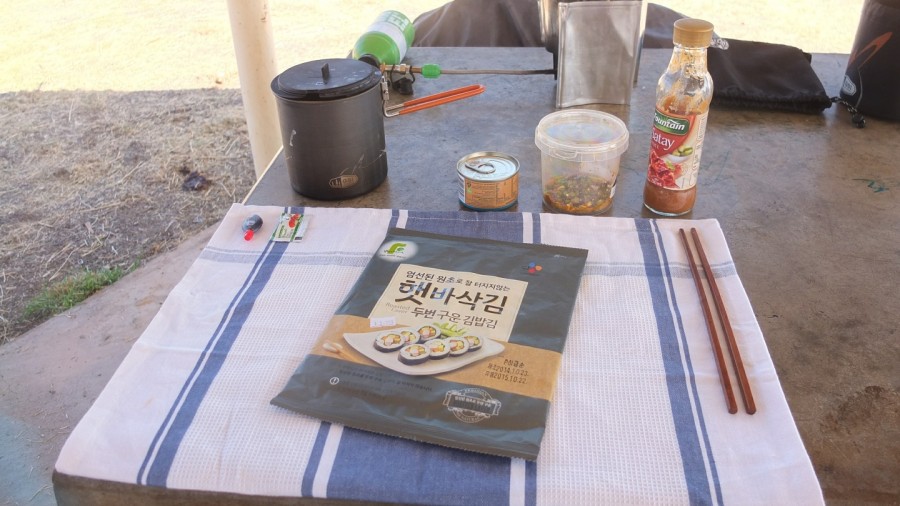 Today, I will make sushi with smoked tuna, a rest a mug beans I’ve cooked yesterday and some satay sauce. Miam! 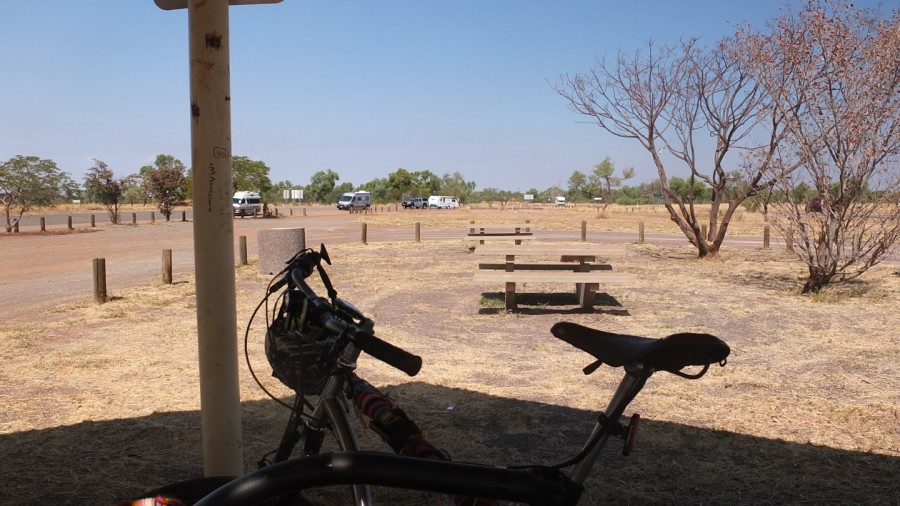 This is quite hot now. I’ve stopped cycling at 11:45am when the temperature was 34 degrees and it must be hotter now. I met another Italian couple driving down to Uluru. We’ve spent lunch together. Later on, an aboriginal woman called Wow-Wow (not sure about the spelling) came to us for a chat. But as usual, and unfortunately, 5 minutes later she asked for money to buy beer and cigarette paper. After 30 minutes, the Italian couple came back from the roadhouse and offer me an ice cream! So many people offer me food these last days. I must look very skinny!
They finally left the place and leave me alone with Wow-Wow who kept asking me for money every 5 minutes between the different stories she was telling me. Finally she went to meet someone else and came back to me. She asked me to take her money to buy her two beers and some cigarette paper. Like the other roadhouse, the guys there have a list of name and sell only a certain amount of beer every day. She knows perfectly the trick and ask to tourists like me to buy some for her. What can I do? I want to be nice to her and help her but on the other side I help her to drink and smoke more than she should. Plus, I’m so bad for lying. I don’t even know how to pronounce correctly the name of the cigarette paper brand… Well, I went to the pub, bought one can and the paper (she did not give me enough money for two cans). I’ve regretted that as soon as I got back.
Then, another Aboriginal guy arrived (already half drunk) eating corn out of a can and shouting “I’m hungry!” Then, he started to argue with Wow-Wow to share some beer. I understood that she explained him that I bought this one for her. Straight away I said I was not going to do that again.
I’ve changed the subject and ask Wow-Wow where I could get some drinkable water as previously she told me to not drink the water from the tanks. Good on her. She told me that I could get some water directly from the pub. I packed my stuff and went to the pub. The lady asked me: “Are you alright?” I’m sure she knew what was my situation (as simple as it is). I’m far to be in trouble but it’s not the best lunch time I’ve ever had :-) The woman from the pub was actually dealing now with 5 guys who wanted to buy more alcohol. They even have a special window with bars (like banks) to sell it. She is inside, they stay outside. It must not be fun everyday to deal with those “poor drunk zombies” coming from the bush to get even more drunk. I’m not against Aboriginals but those guys, doing their everyday job, have some hard time. 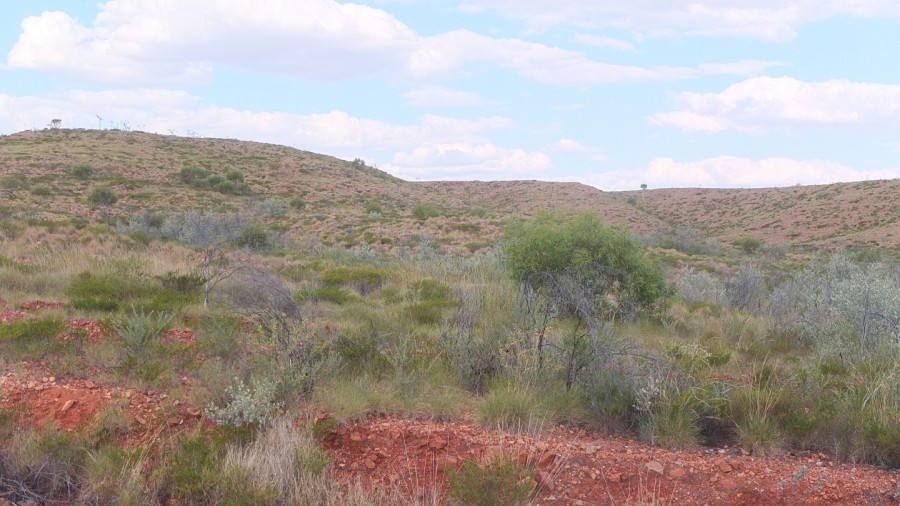 Well, I’ve finally escaped from that place and I’m happy to be on the road again for a maximum of 10km. 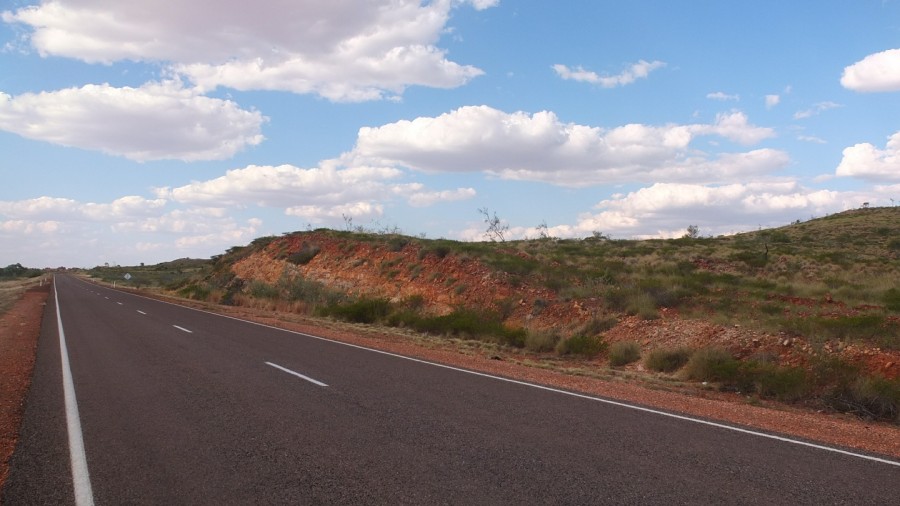 The area is a bit more hilly around. 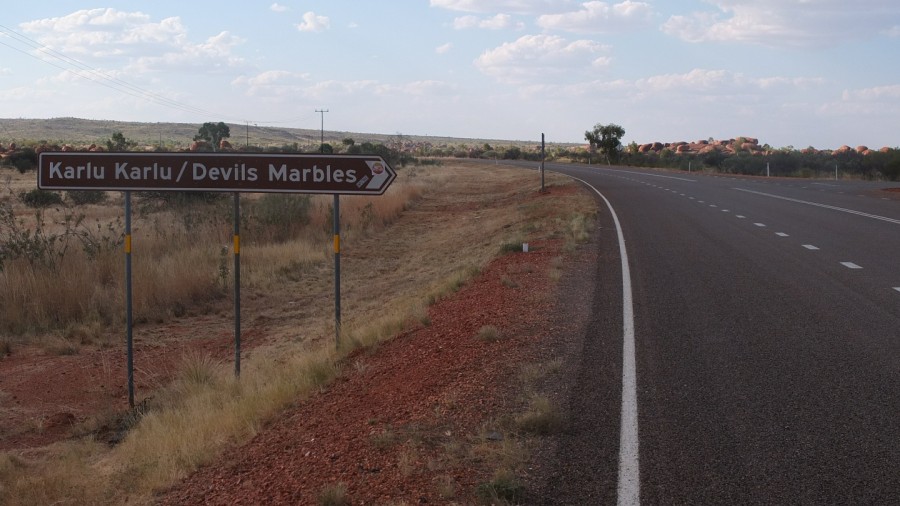 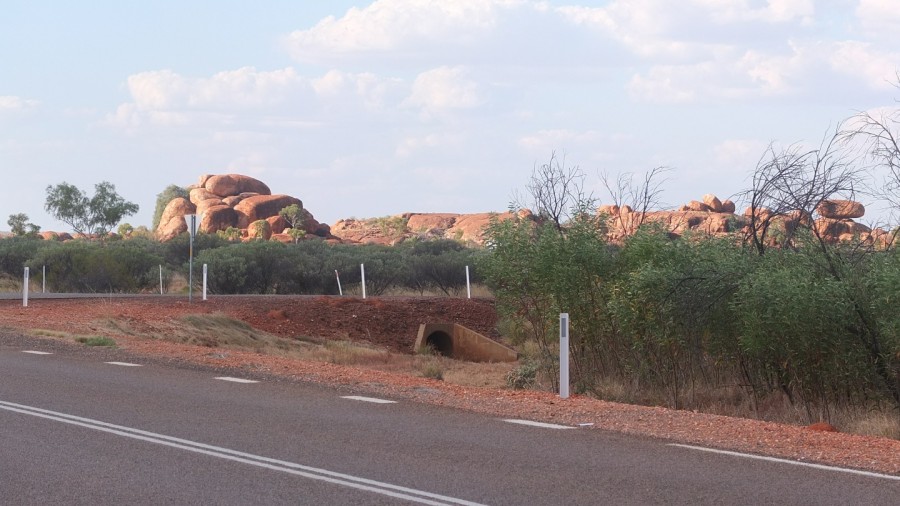 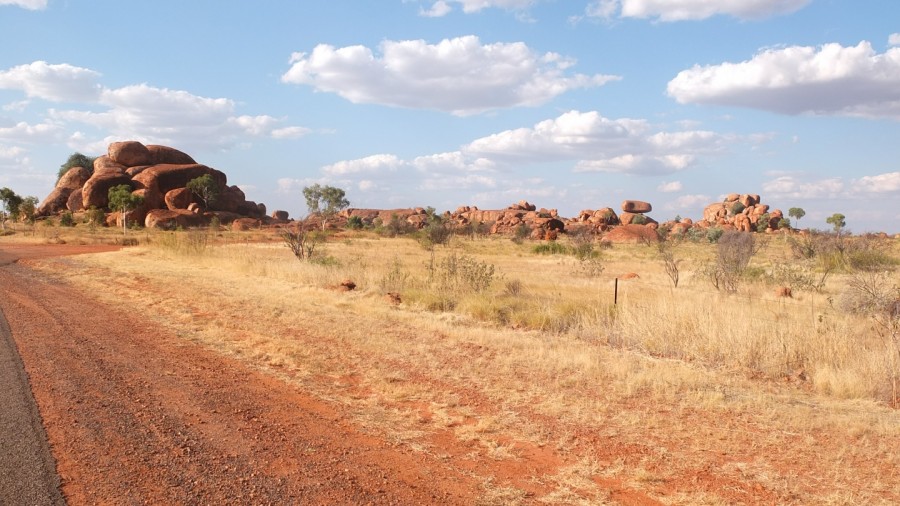 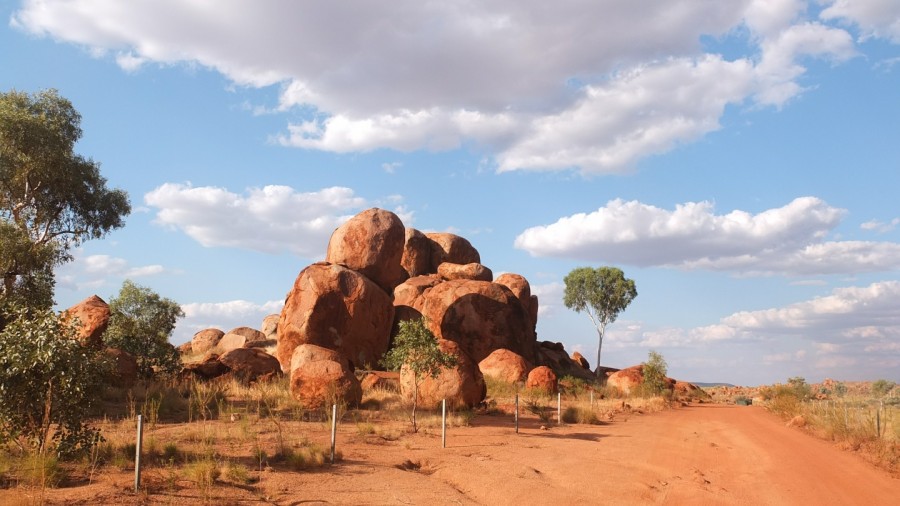 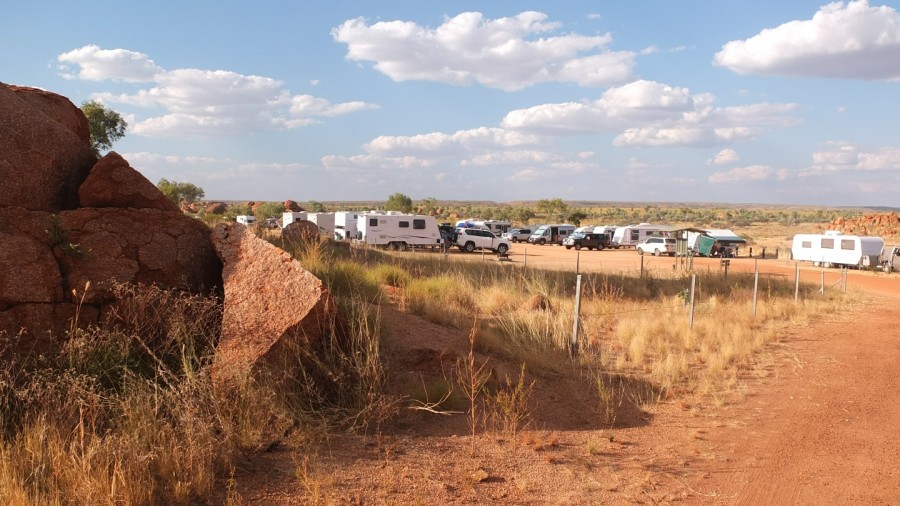 And almost piles of caravans! 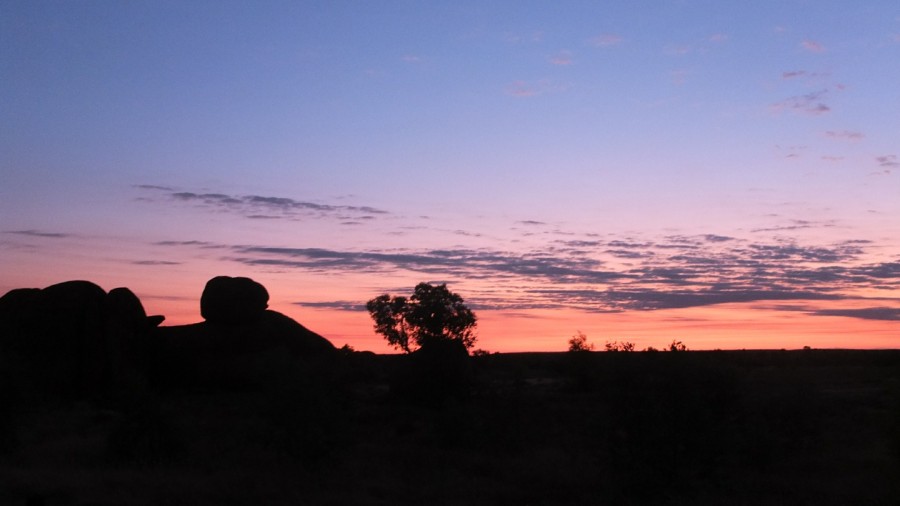 Again, finding a place where to pitch my tent was tricky but I could managed that :-) I’ve met Amy and Jude who are travelling towards Darwin as well. Not like the majority of the travellers here, they have a tent like me. They offer me a tea and I brung the biscuits then did our own stuff for one hour or two. I’ve fixed my front tyre again as the stitches became weak. Later on, we had dinner together, this time I brung the rest of the sushi I made during lunch time and they cooked some beans, mash potatoes and tuna, green beans. All together was lovely :-) Finally, we went to bed early. Tomorrow I will wake up before six, expecting to be on the road before sunrise! See ya :-)