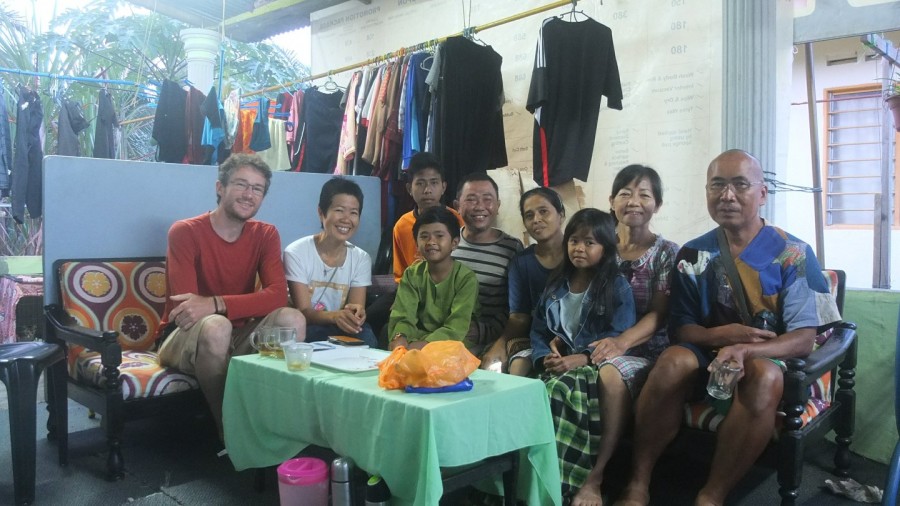 Today, we are going to cycle towards the west earlier than I thought. Arjan and Kate are worried about their appointments and the road we are taking now is longer than the one they usually choose. We decided to cycle through Kota Tinggi and join the west coast again. This was not my original plan but for now I enjoy cycling with them so I will follow (actually I’m the only one who have a GPS ;-) 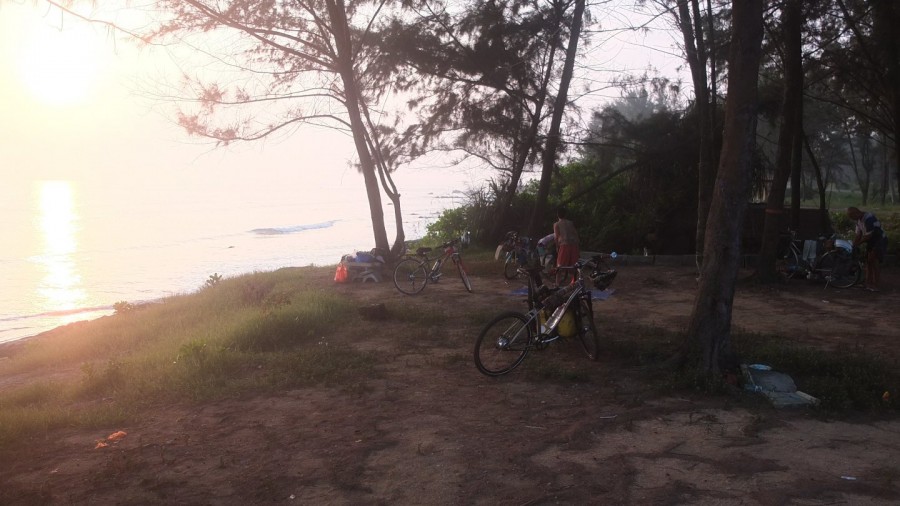 This is where we slept last night. It was very quiet and fortunately no rain came. Arjan and Pee Ta don’t have any rain cover on their tent so this is why they prefer to sleep in temples I guess. 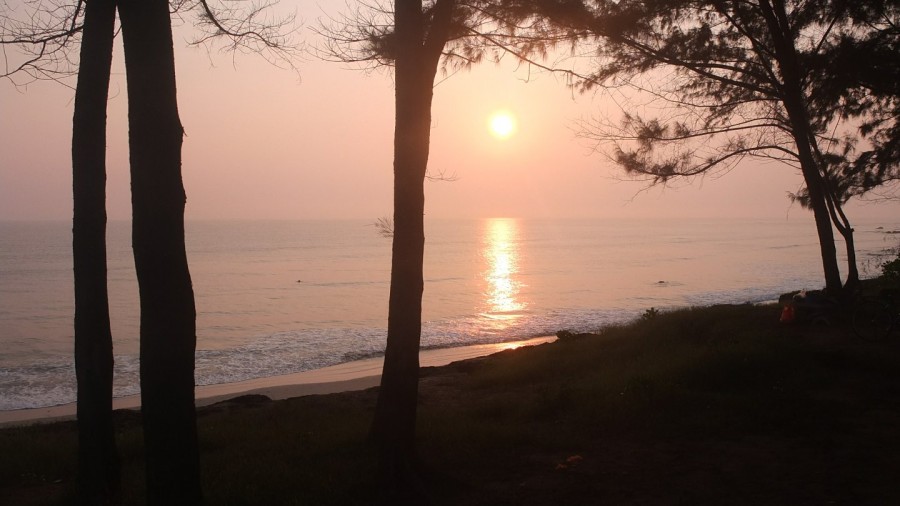 We can enjoy a nice sunrise over the water. 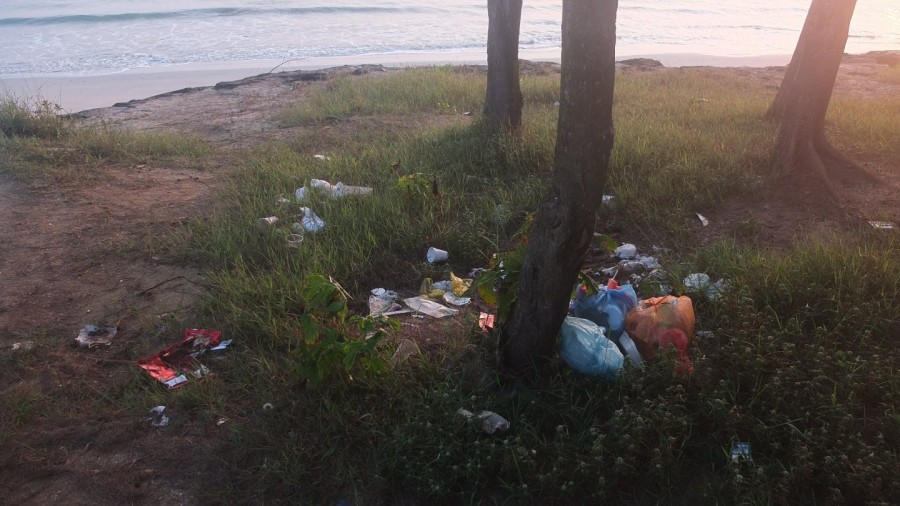 Yesterday, we tried to clean as much as we can but we did not have enough plastic bags to pick up all the plastic rubbish. Bloody plastic and humans! 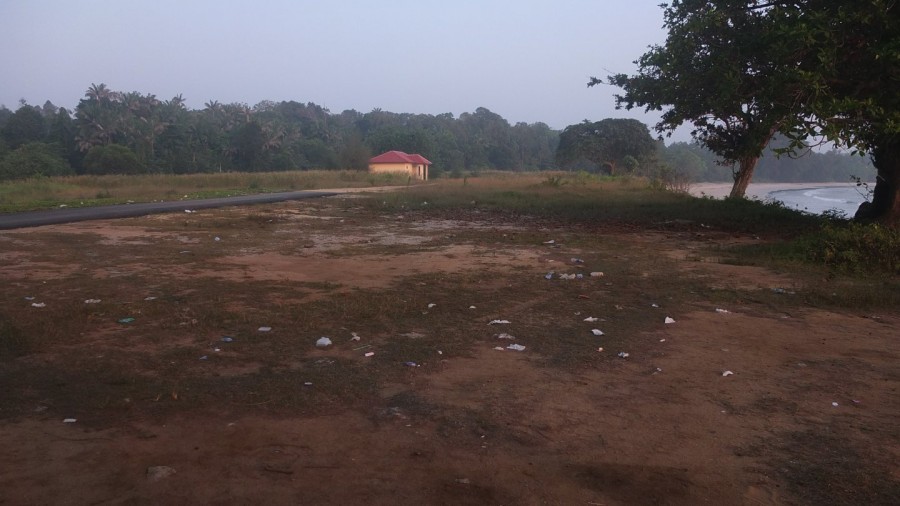 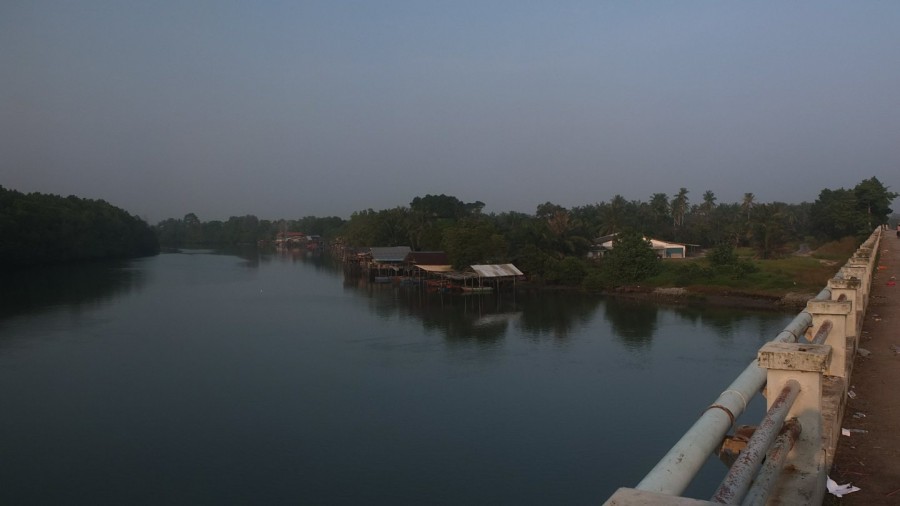 The weather is not with us for now… 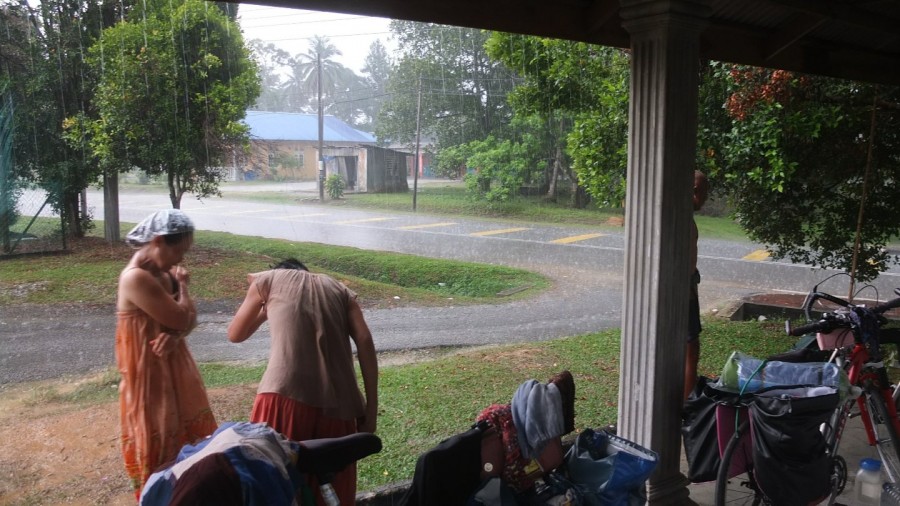 After few hours cycling, the rain started slowly. We’ve just pass front of a school and nearby there was this place: a roof and a large platform underneath. Few minutes later, the rain was pouring! I’ve never done that before and wanted to try since a long time. Having a shower under the rain :-) At first, I was the only one and then Arjan followed and then Pee Ta and Kate. Even when it’s raining it’s not cold and we have a roof to keep dry afterwards. 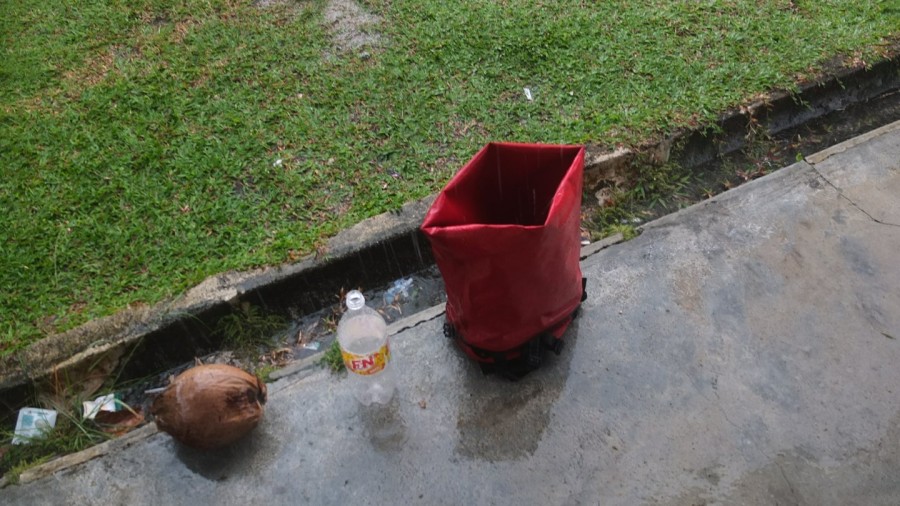 At the same time, I was collecting water from the roof to be able to filter it after that. Don’t miss any opportunity to collect water! 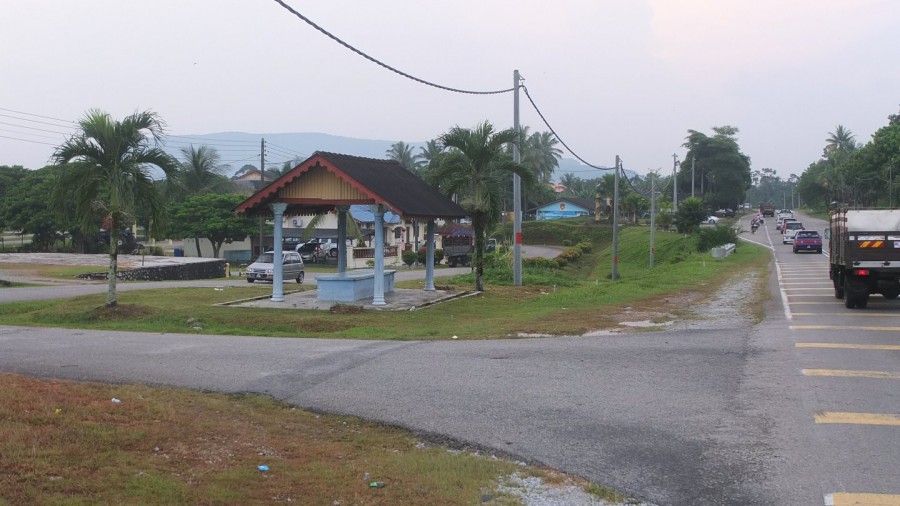 Maybe after an hour rainy break, we continued cycling towards Kota Tinggi. 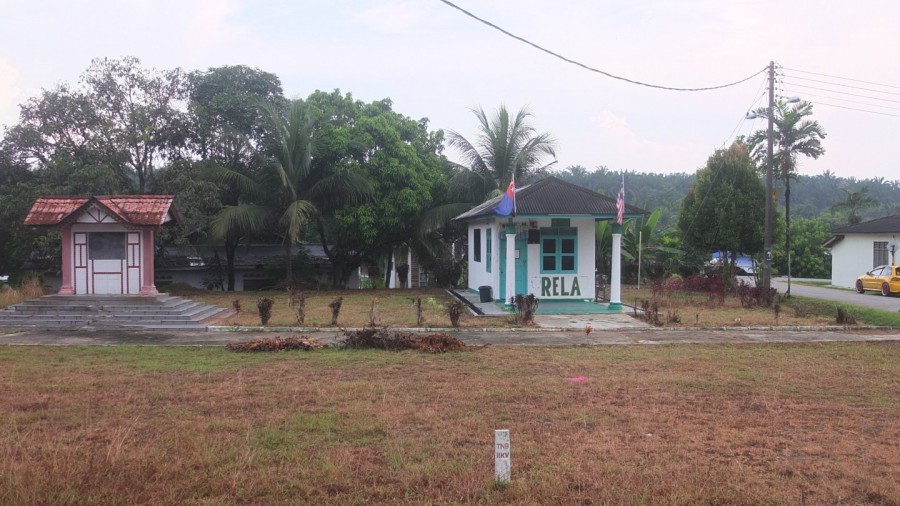 Are these houses? temples? 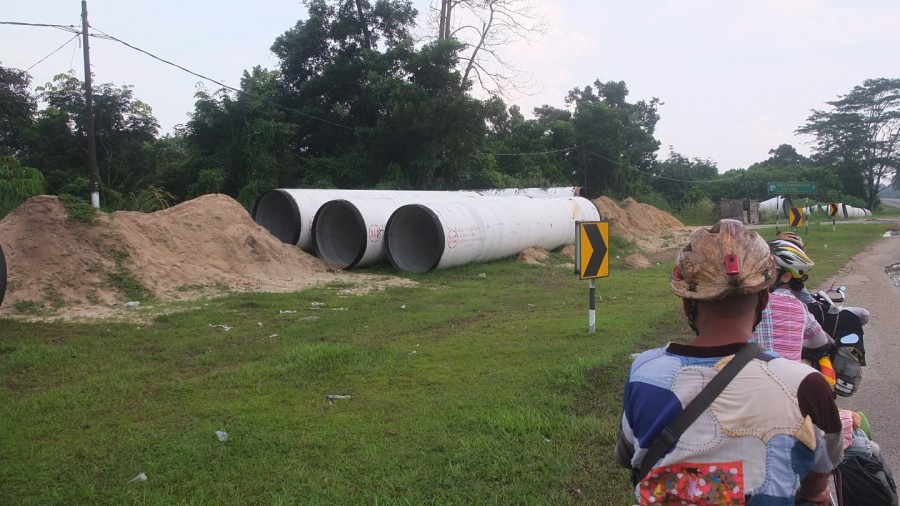 Hey! if we were now looking for a place where to stay for the night I would sleep in those tubes :-) We can fit a family in there haha. 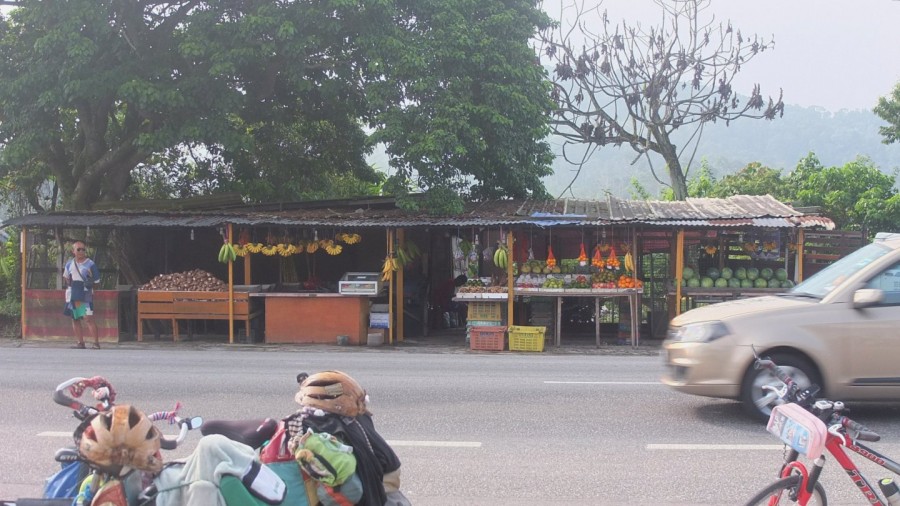 Short break to get some fruits. 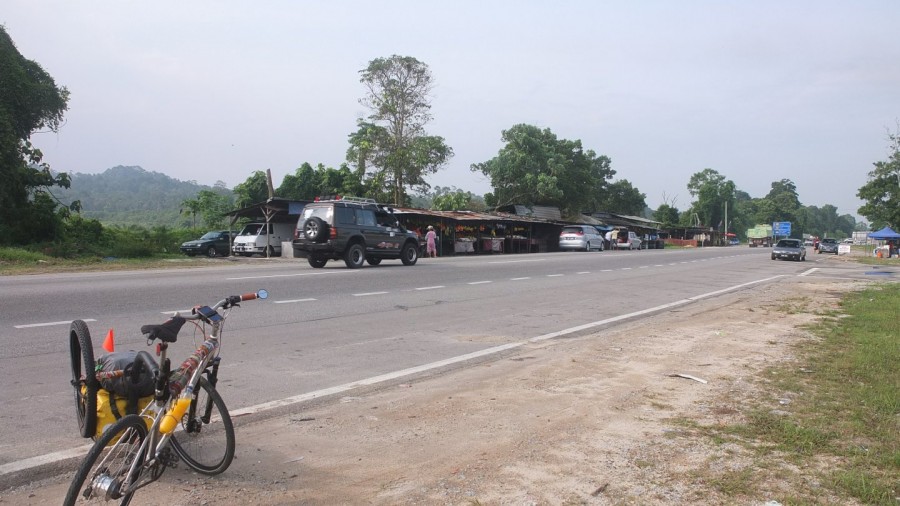 The road is a bit busy now but the worse is actually the smell. It’s a mix between haze, pollution and shit. Not the best though. 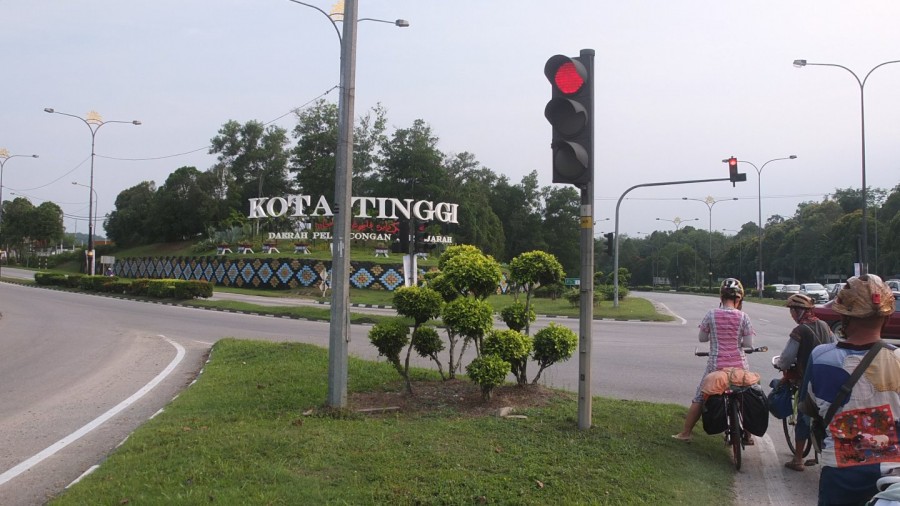 We are nearly in Kota Tinggi but we will get around the city to avoid traffic and more pollution. 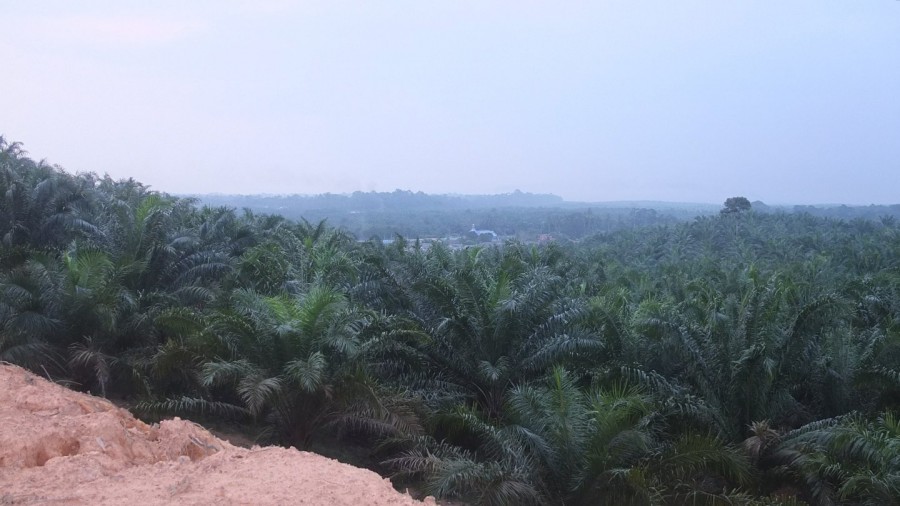 After Kota Tinggi we turned right to stay on secondary roads. This road is straight with many up and downs. Around, only palm oil forest again. I was looking for a spot for the night so we got off the road and found a huge empty field. When I arrived at the end of it we could see a bit further and even a village down the valley. Let’s have a look. 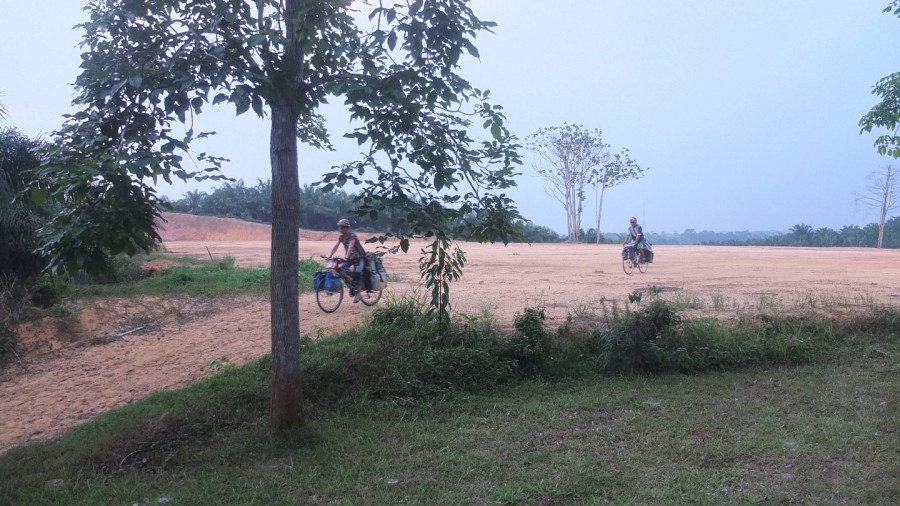 We are coming back to the main road to reach the village. 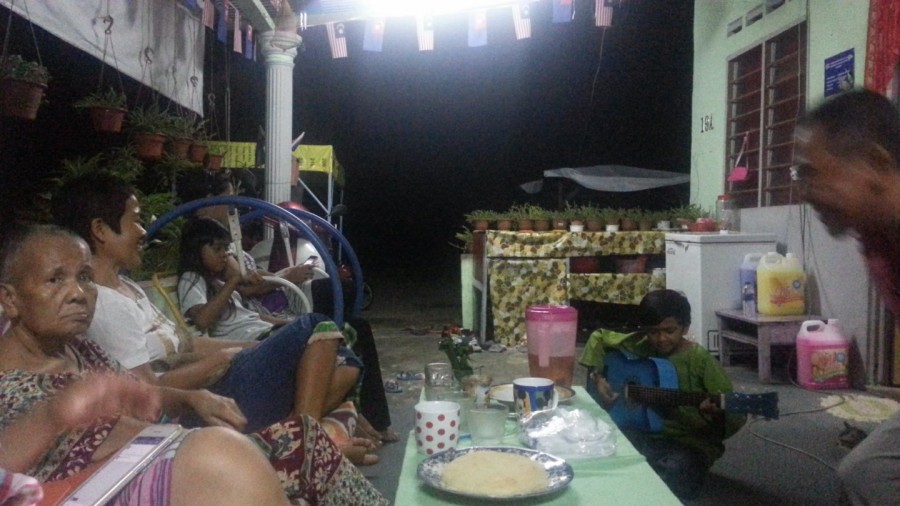 I knew there was a football field here (google satellite told me ;-) so we went to the place and saw a shelter, a roof and a concrete floor. I went to ask to someone if we could sleep here. The guy told us : “ask him, he speaks english”. He shouted something in Malay and a minute later a man came to us. He said we could sleep at that place, no problem. Then he invited us in his house, offered us to have a shower, some drink, some food. Kate had to explain that her and Arjan eat only one meal per day. A neighbour came in and offered us some more food too! 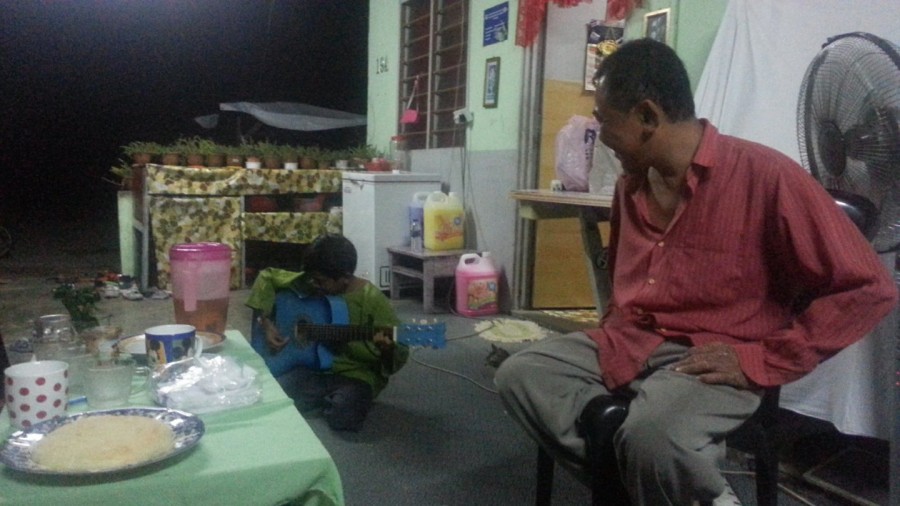 One of his son played a song for us. He was also singing. That was nice. His dad use to be a guitarist in a group when he was younger so he taught his son. The parents has 7 children and live and work at home. 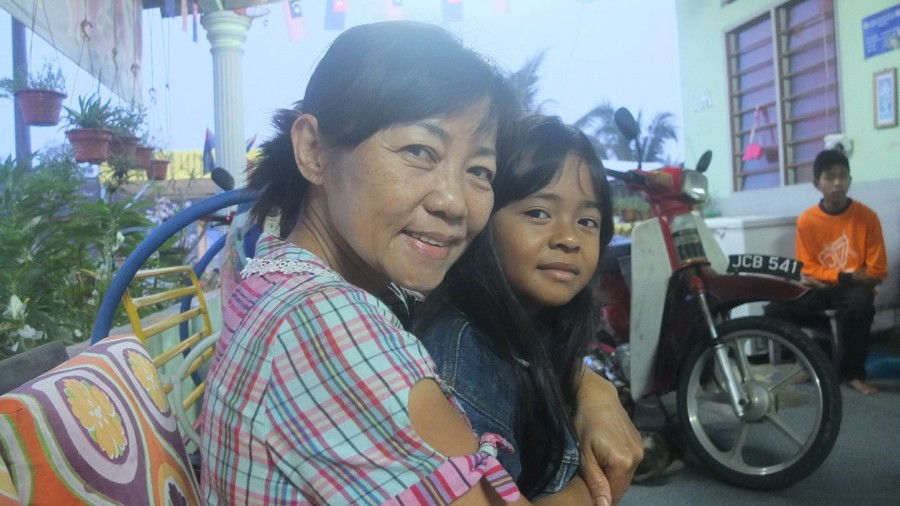 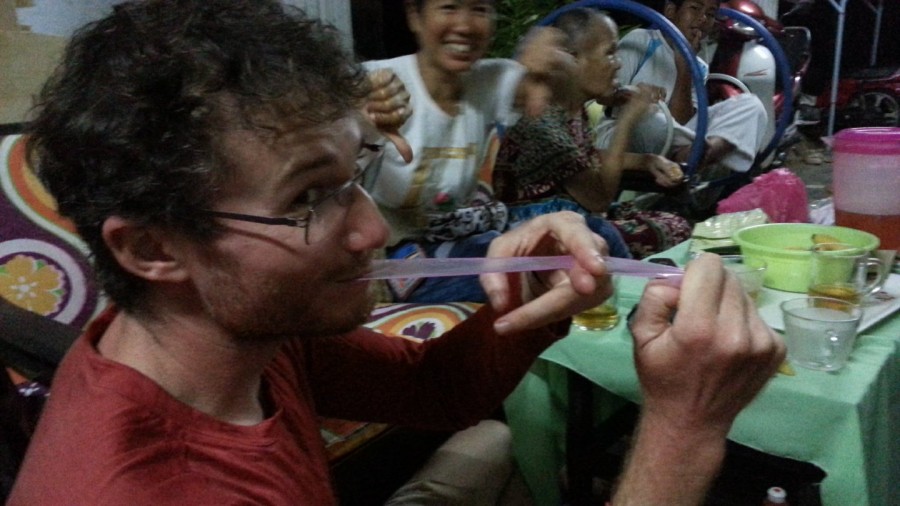 The dad kept offering us food. This time, they offered home made ice cream. I had to try :-) 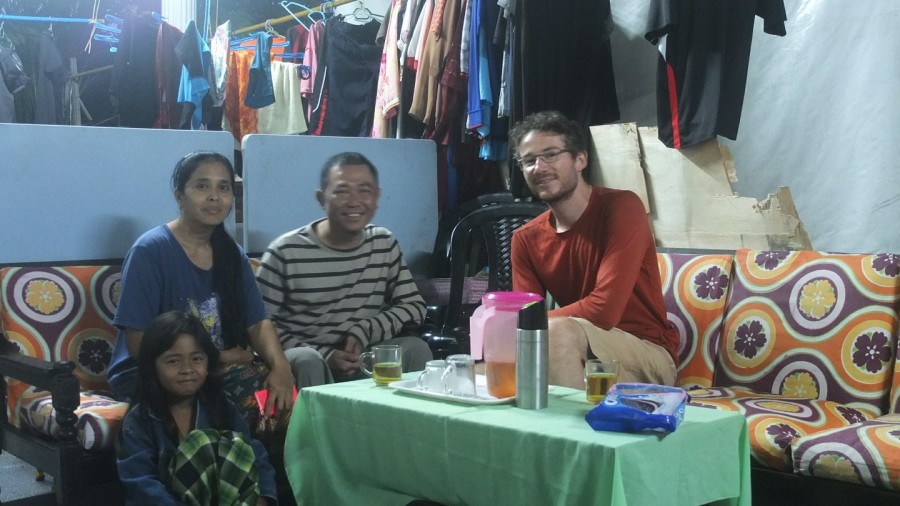 The parents and one of their daughter. They seems very peaceful and happy.