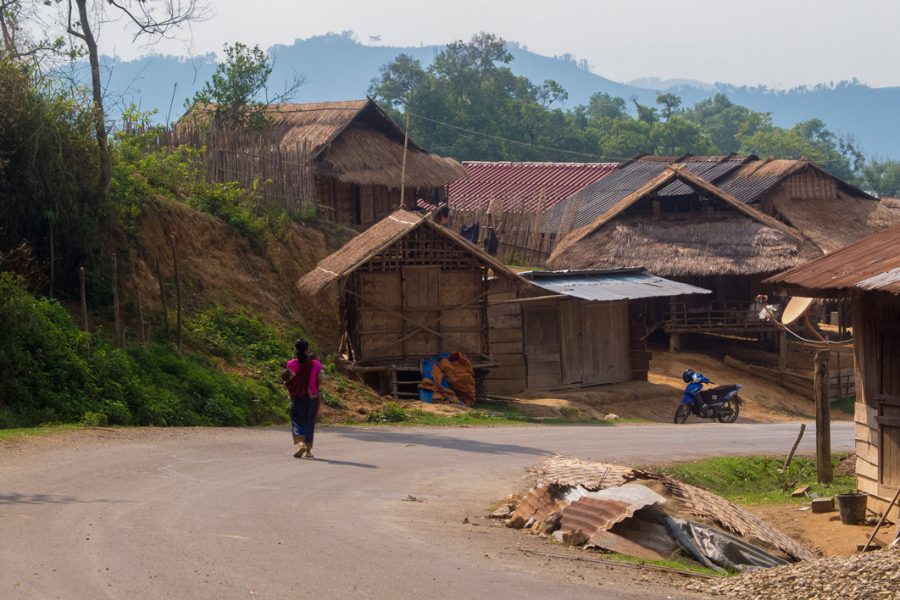 Arf! Another big day today. Right this morning, just after I left the village where I slept, I had to push my bike again and for a while. The first 400 metres climb was so steep! I was so tired too! Bloody hill! Once I arrived to the top, a roughly 6 kilometres downhill brought me back down to 600 metres high. I was in the bottom of giant bowl except that the next climb ahead was 1000 height difference… Every day I’m getting more tired obviously but every day the road becomes more difficult. At this pace I won’t be on time in Vientiane… These mountains (or big hills) are killing me! 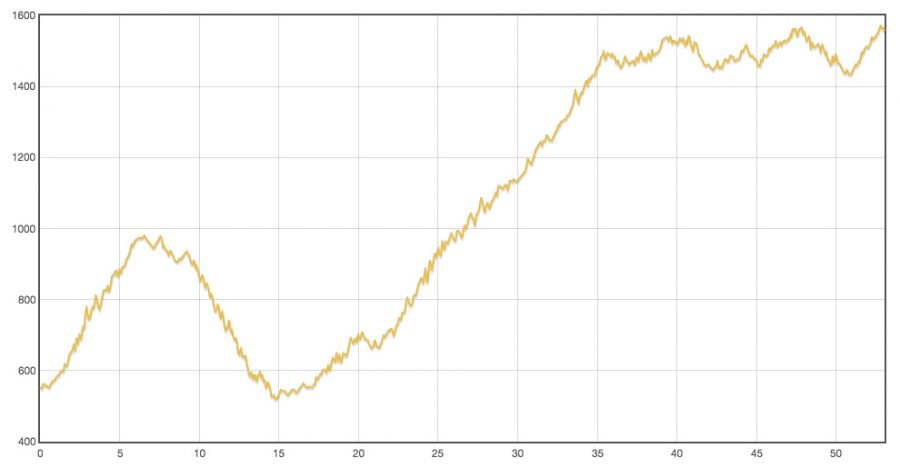 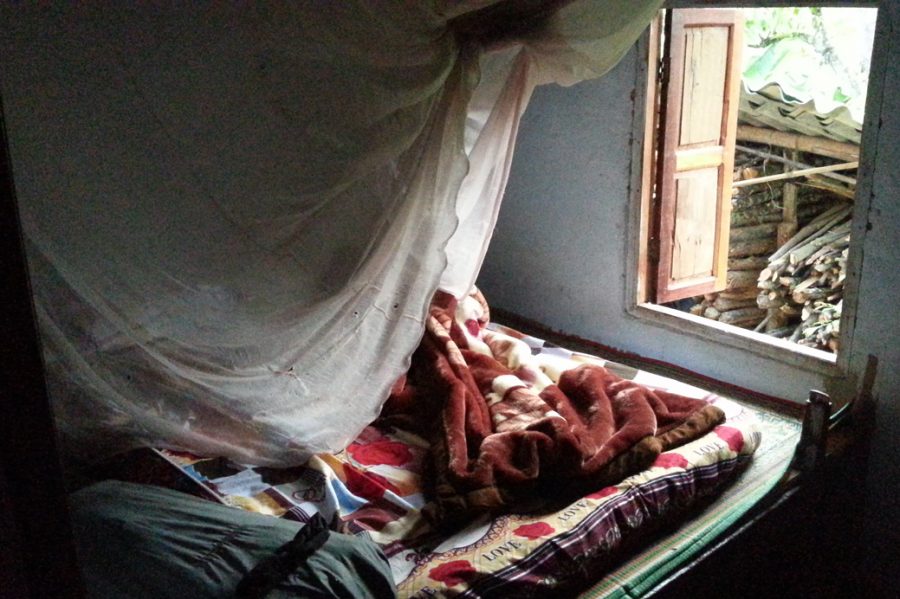 Back to this morning, this is the room where I slept last night. It was very basic but I don’t need anything better. The mattress was comfortable and I slept very well. 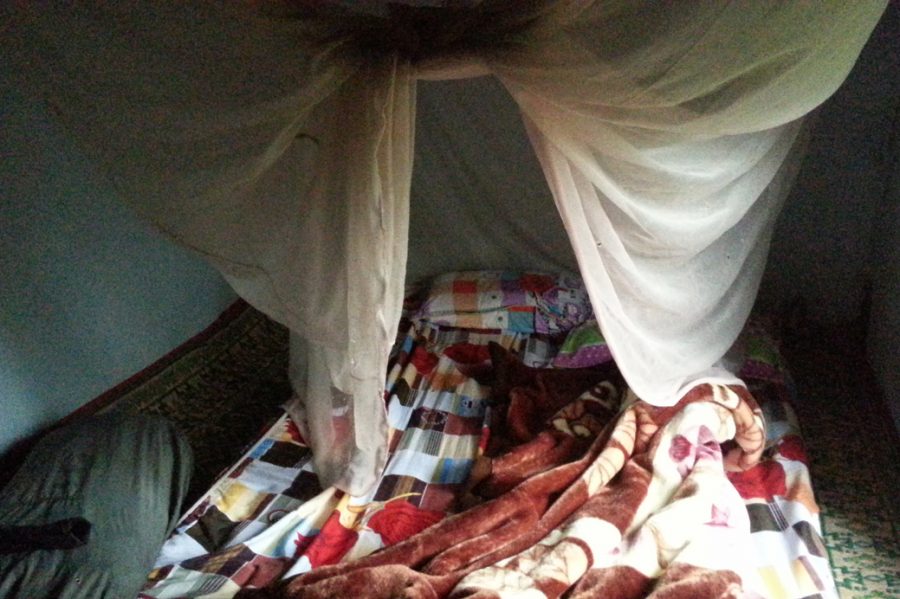 I was very happy last night to hear a storm hitting the village. I was comfortably laying in my bed without wondering if I would get a free shower or not :-) 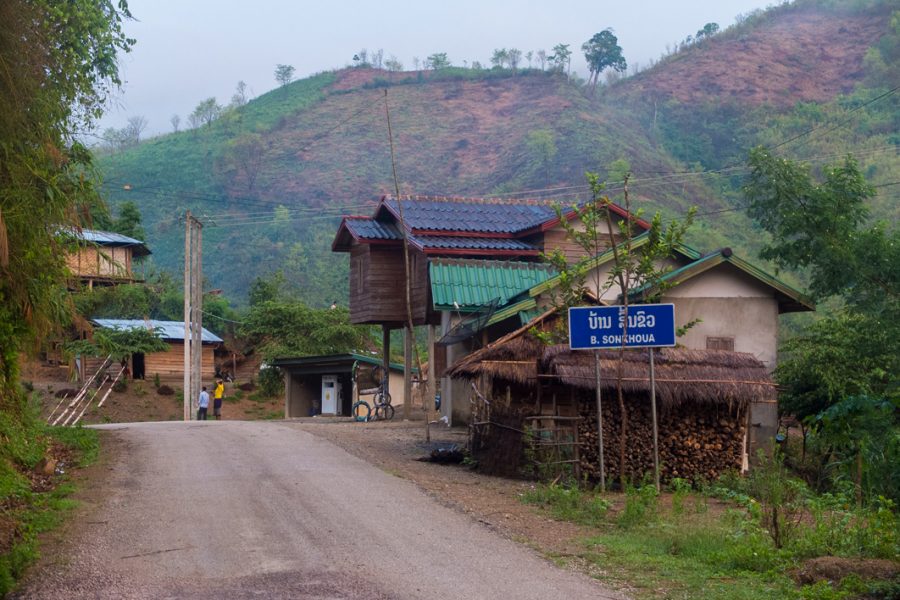 I got ready very quickly this time and left Ban Sonkhoua early. The bad surprise was about the price of the guesthouse: 15.000 became 50.000 Kip. Are they doing that purposely or what? Actually 15.000 Kip would have been super cheap, so I was half surprised. Anyway, let’s start this day. 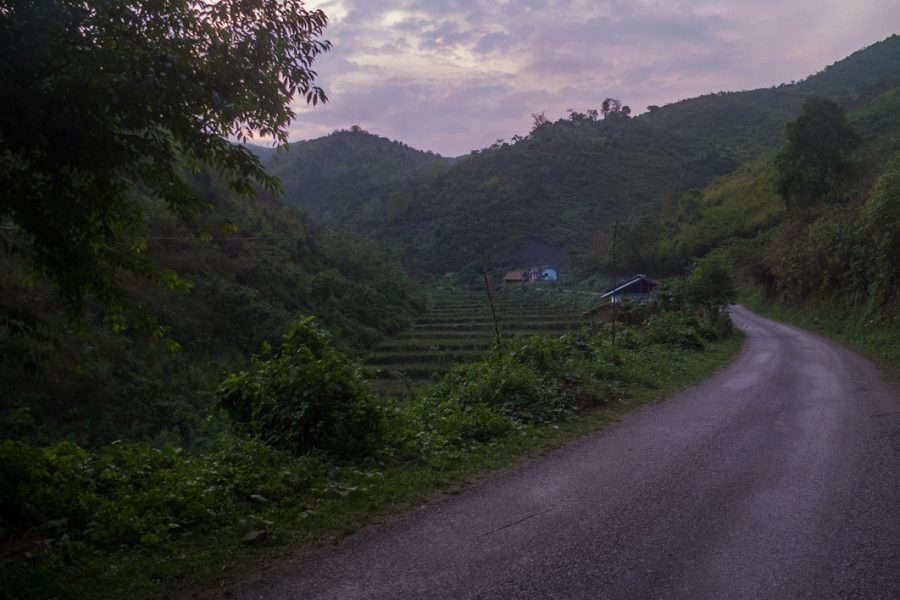 The sky is covered this morning. I hope rain is not coming back to soon. 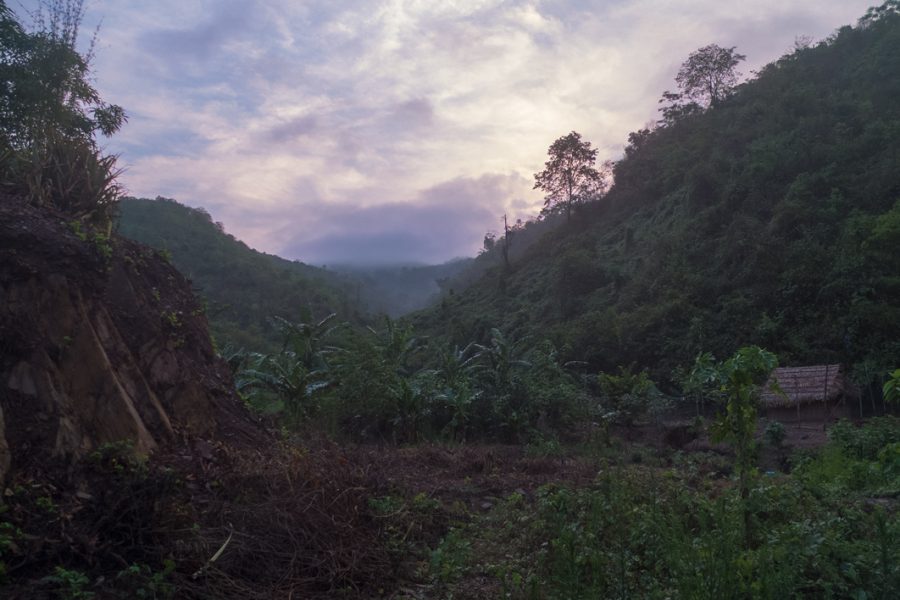 This is the last corner before the road starts going uphill. I had less than a kilometres to get warm… 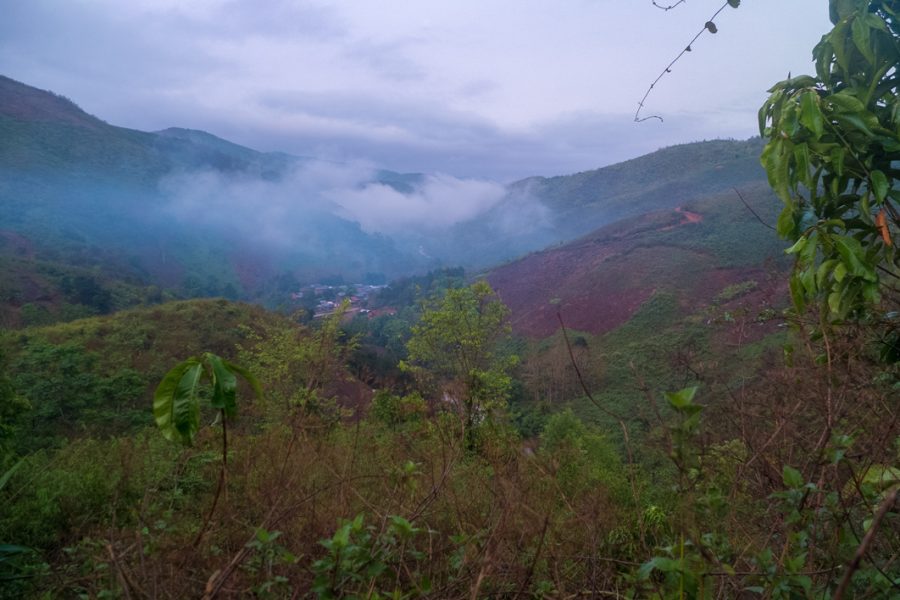 Few! I cannot cycle here! The road is just too steep. That’s the village where I slept last night. I’m struggling already. Looks like I have 6 kilometres like that… I’m not going to move very far today at that speed… 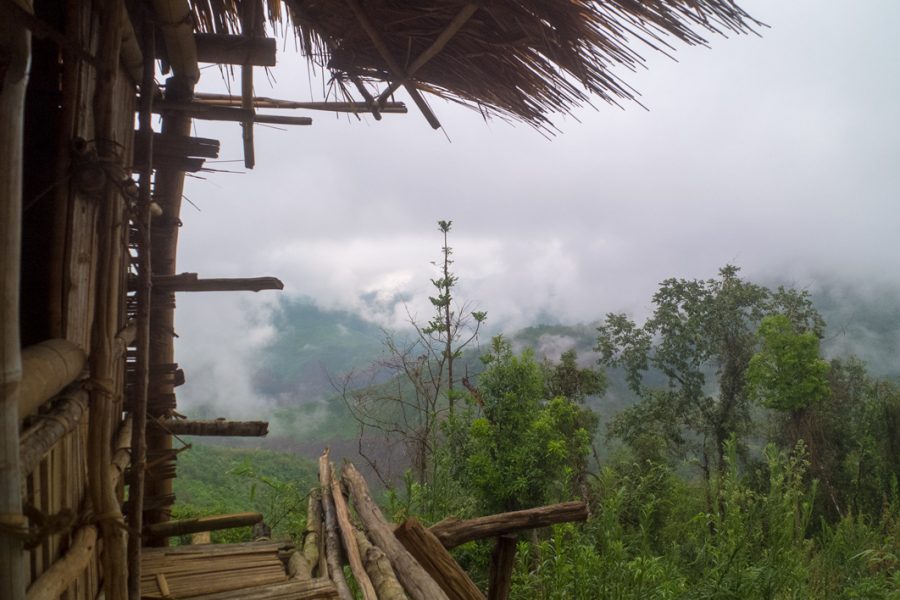 More than 90 minutes later, I finally reached the top. Well, I hope it is! 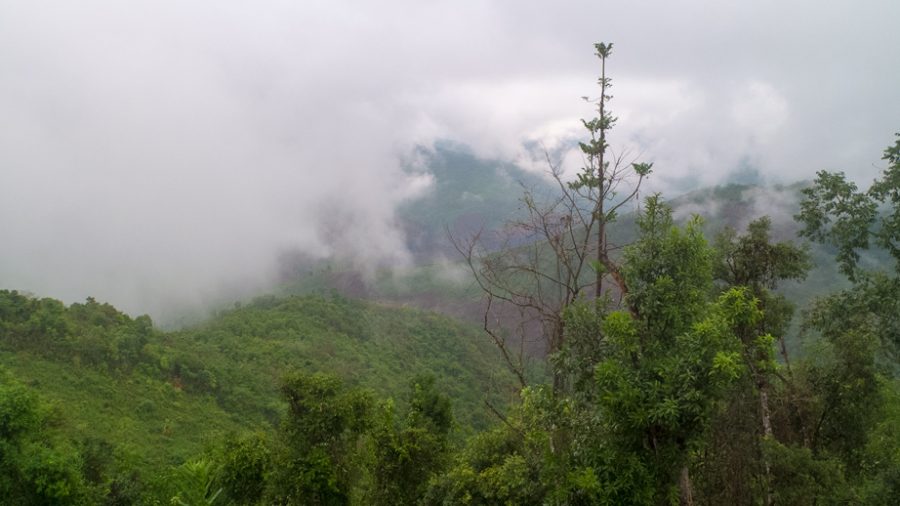 Clouds are very low again. I barely can enjoy the landscape. 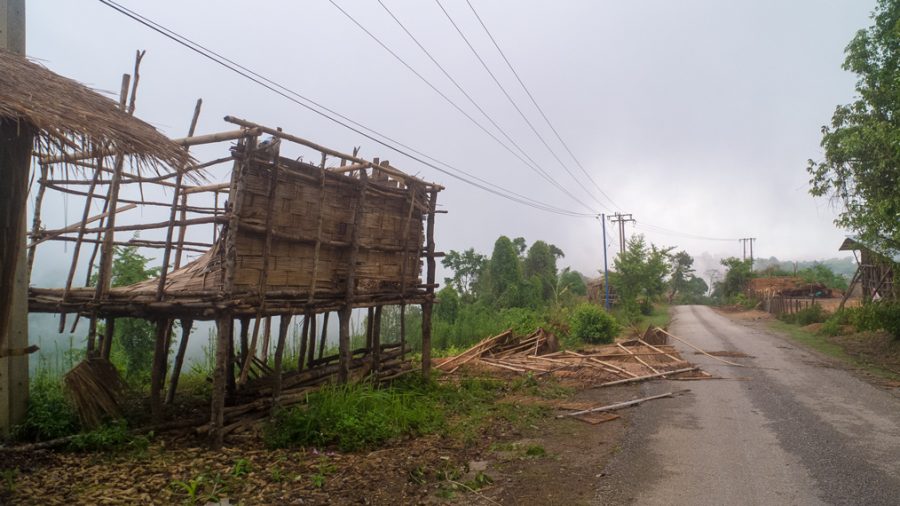 The previous storms have done their job apparently. Lots of sheds look like this here. 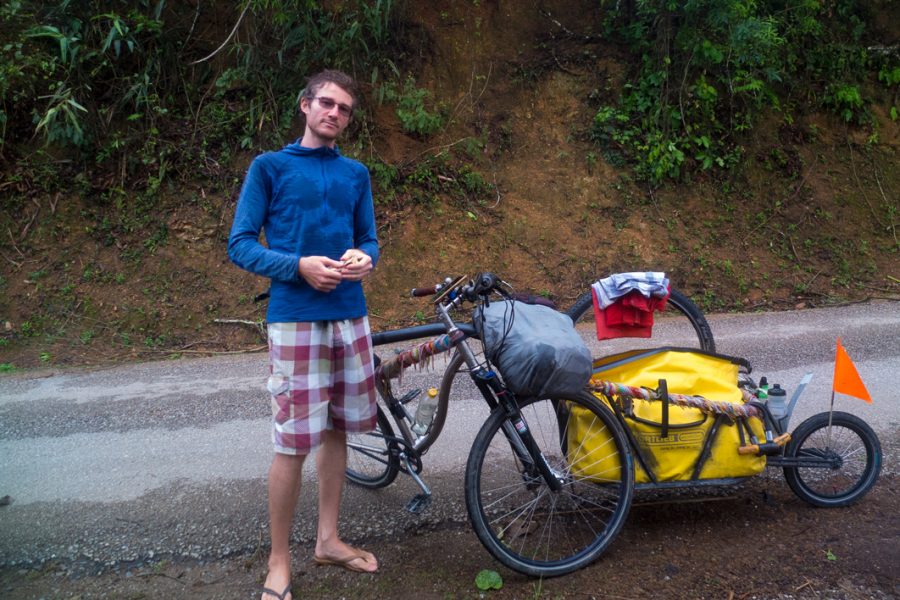 I’m good for a break. I’ve done 6km and I’m already sweating so much. 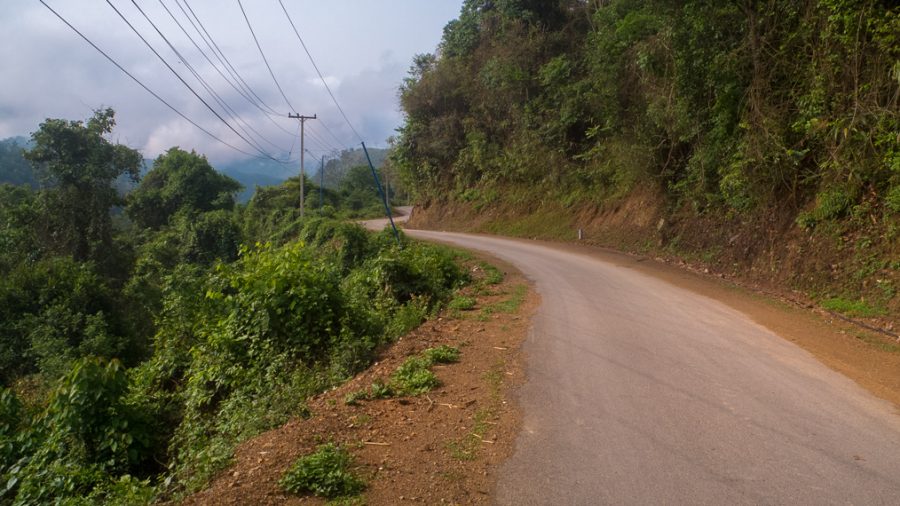 Finally the first downhill of the day starts. 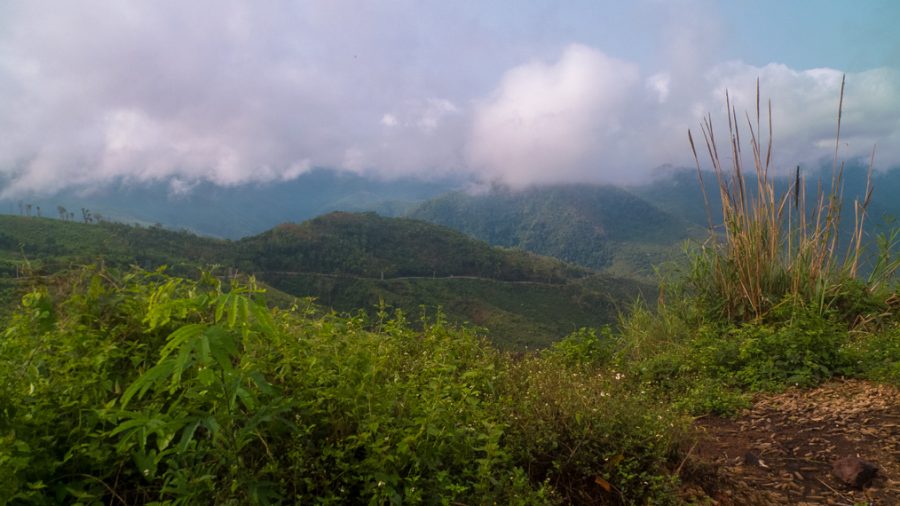 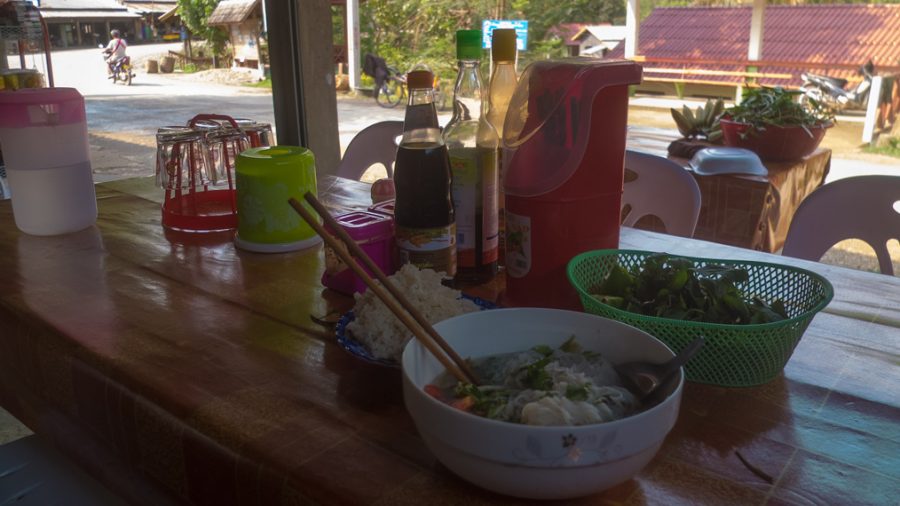 During the downhill, I was following a small tipper truck. At that time, I was ready to take the first opportunity to ask the driver if I could put my bike inside for the next long uphill. That way, I would accelerate a bit and assure that I would be on time. Unfortunately, when the truck stopped at the bottom of the hill, I asked the driver where he was going but he showed me he was coming back up. I don’t like to ask for help anyway.

Once in the village, I stopped at a restaurant to have some brunch (noodle soup? of course!). I expected to find another truck like the previous one but I didn’t have any opportunity… On the other way, I would feel ashamed if I would skip a part of this trip. I’m sure other cyclist have done some more difficult roads. Bah! I will do it then. Be strong!

Finally, I left the restaurant, ready to start this second big portion of the day. 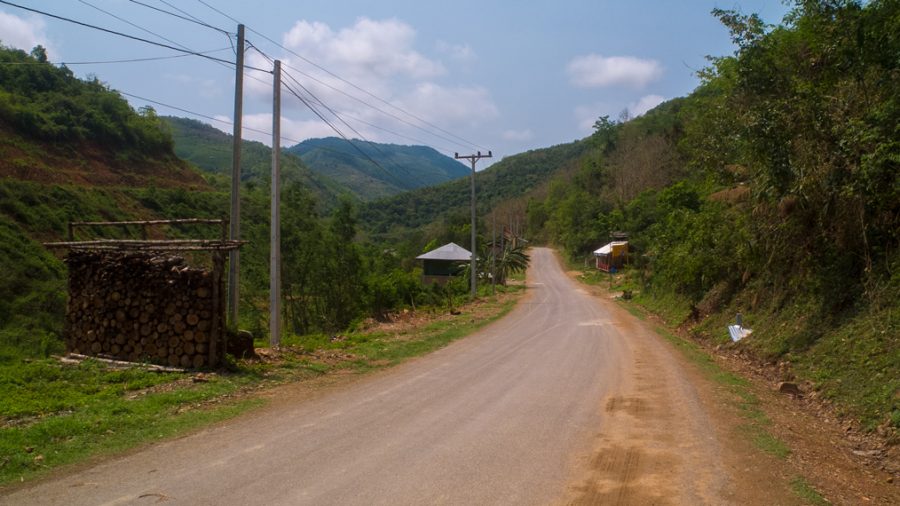 Just after a bridge, I met a guy, a military guy. First he asked me some questions and asked for my passport. Nothing was wrong and we kept chatting for a minute. He was the first guy I met who speak enough english! Just before I left he said: “From here, there is not much mountains”. I think this guy has never used a bicycle in his life. If you have a look again to the Elevation map, I met him just before the 1000m climb. “There is not much mountains”. Yes, of course! How come people don’t realise when it’s going uphill or when it’s flat. Maybe they want to be kind with me but this is absolutely not working at all! That’s even worse because then I have expectations. Especially when I’m tired.

I did not take any pictures during the previous 4 hours. I’ve been cycling (well, pushing) until 12:30pm and started again around 3pm. It was so hot! The idea catching a truck was still in my mind but I did not find the good opportunity. When I had my break, I disassembled my bike and trailer so it would be more convenient to fit it at the back of a truck incase I met someone. It would also attract the attention of people maybe. I expected someone would stop and ask if I needed help. I’ve seen dozen of cars but nobody cared, at all. I’m sure in Australia or New Zealand I would have met someone. Whatever, I put my bike back together and decided to keep on going under this extrem hot weather. It could be around 40 degrees, easily!

I’m now above the 1400m high. The road is now doing up and downs. Along the way, I’ve met lots of students (certainly on their way back home) who started to follow me. Me cycling uphill and them walking, we had nearly the same speed. We stayed together approximately during 2 kilometres until the next short downhill. Few minutes after that, I’ve seen many younger kids walking back home on the side of the road. Some of them were playing with little rocks, some other with some water. They took their time. When they saw me and when I arrived at their height, few of them, with a large smile started to follow me. As slow as I was, their short legs were long enough to follow me without running. Less than a minute later, that was about 30 kids who followed me, laughing, staring at me, smiling. We reached their home town together and house after house, like if I was the driver of a school bus, the kids left me one after each other. 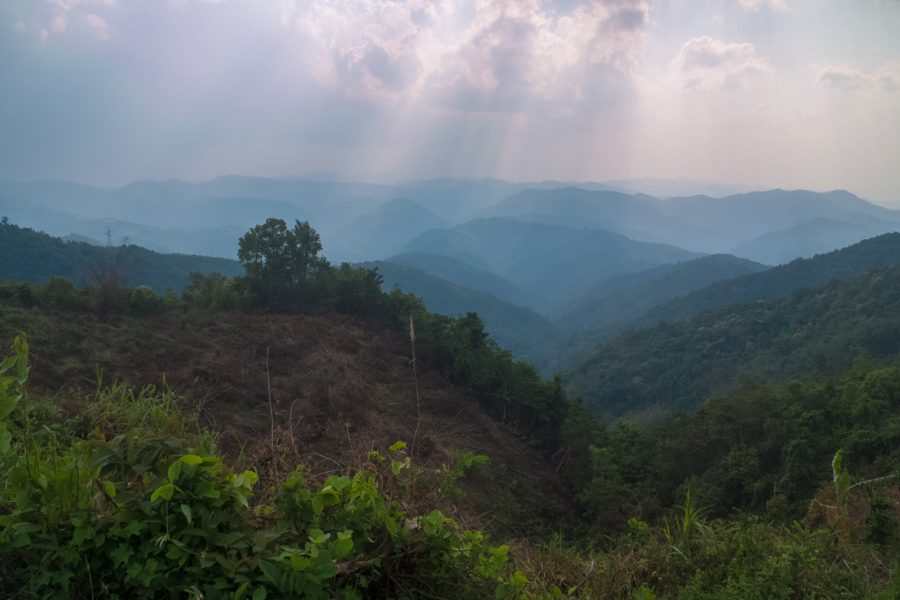 After that village, I said bye bye to the last kids and kept on cycling. I would like to do at least 50km today. Even if I was tired, the road was still easier than before. I saved some energy during short downhill and thought about the next one during uphills. 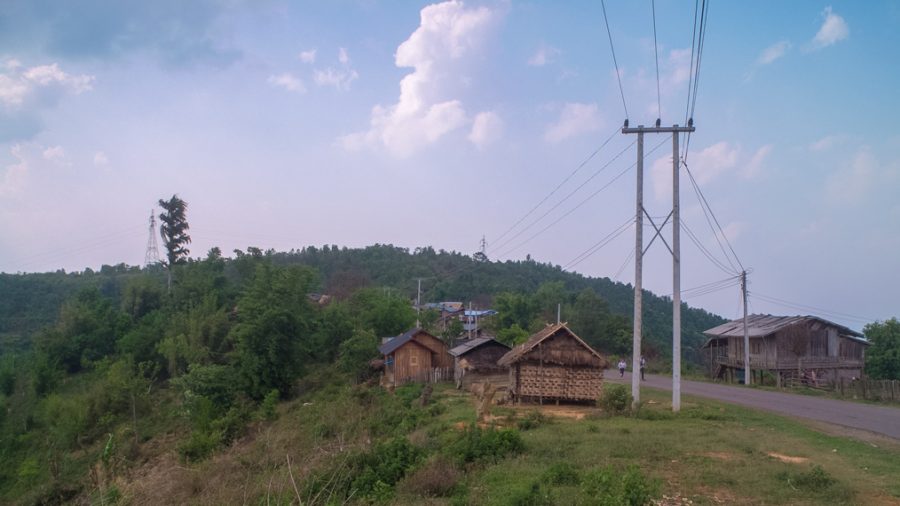 Like I mentioned before, on each flat section of the hill, there is always a village, like now :-) 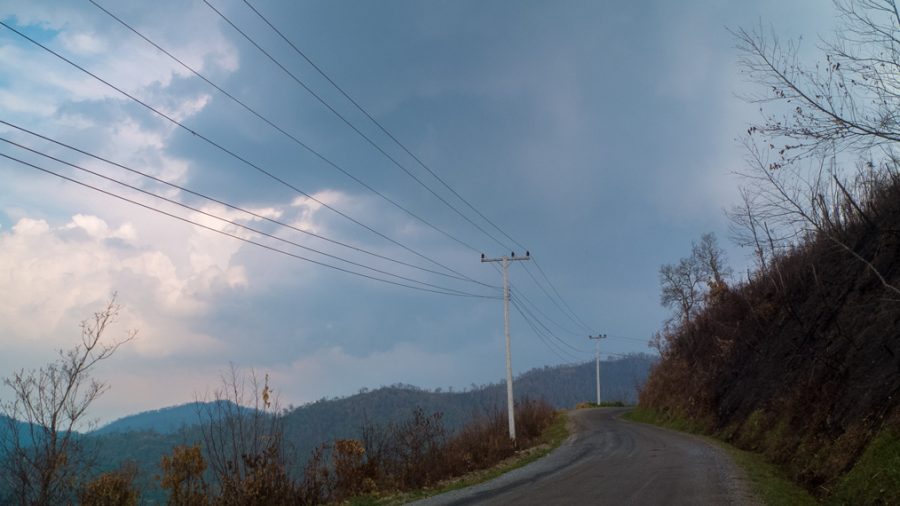 Looks like a storm is forming over there. That’s not good, not now! Wait a bit please! 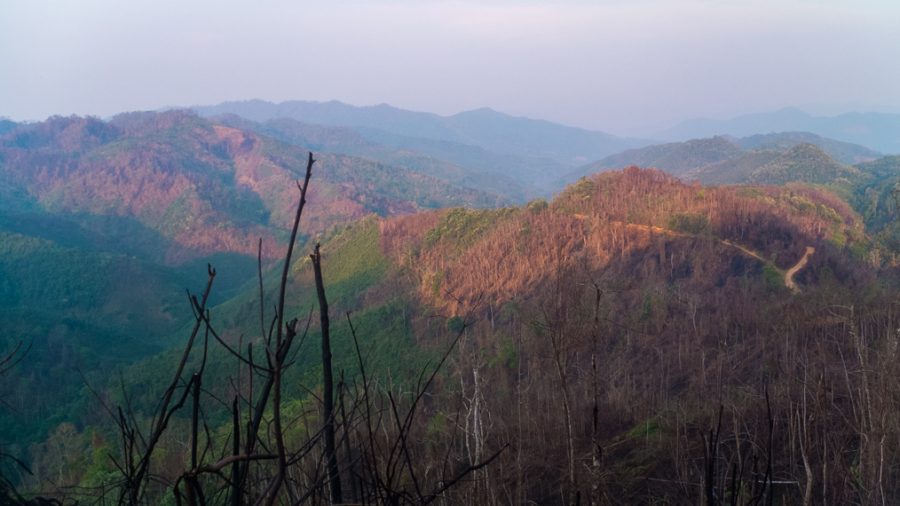 Most of the forest here has been burned down. The view could be nice but it feels more sad than anything else.

Panoramic view including the road.

This side of the valley looks better.

There is another village coming. Should I try to find a spot around this area? I’ve done nearly 50km now. It’s not that good but I could not do better… I’ve done my best!

Finally, I passed the village, had a downhill then decided to do another last hill before I reached another village again. I was lucky to find a fresh water source at its entrance and not far after that I discovered a good enough spot next to the road. Unfortunately, there was no trees but that’s not too bad. I know how to set up my hammock on the ground. I just hoped the next storm won’t be to hard on me… The best should be no storm at all tonight. The spot I found was not far below this platform. I did not see any light inside so I did not try to find someone to ask if I could stay here of not.
Later on, during I was occupied setting up my campground, I’ve seen someone looking at me 10 metres away in the dark. That surprised me first. I came toward that person who was an elderly woman. I supposed she was the one who lives down there so I asked her if I could stay here. Fortunately she said yes and kept looking at me during I was gesticulating around my camp. Later on, another two guys popup to see what I was doing. They silently observed me building my temporary home. Sometimes they would come closer to see better what I was doing. I finished when it was totally dark. I had a simple dinner and then went to sleep. Good night!