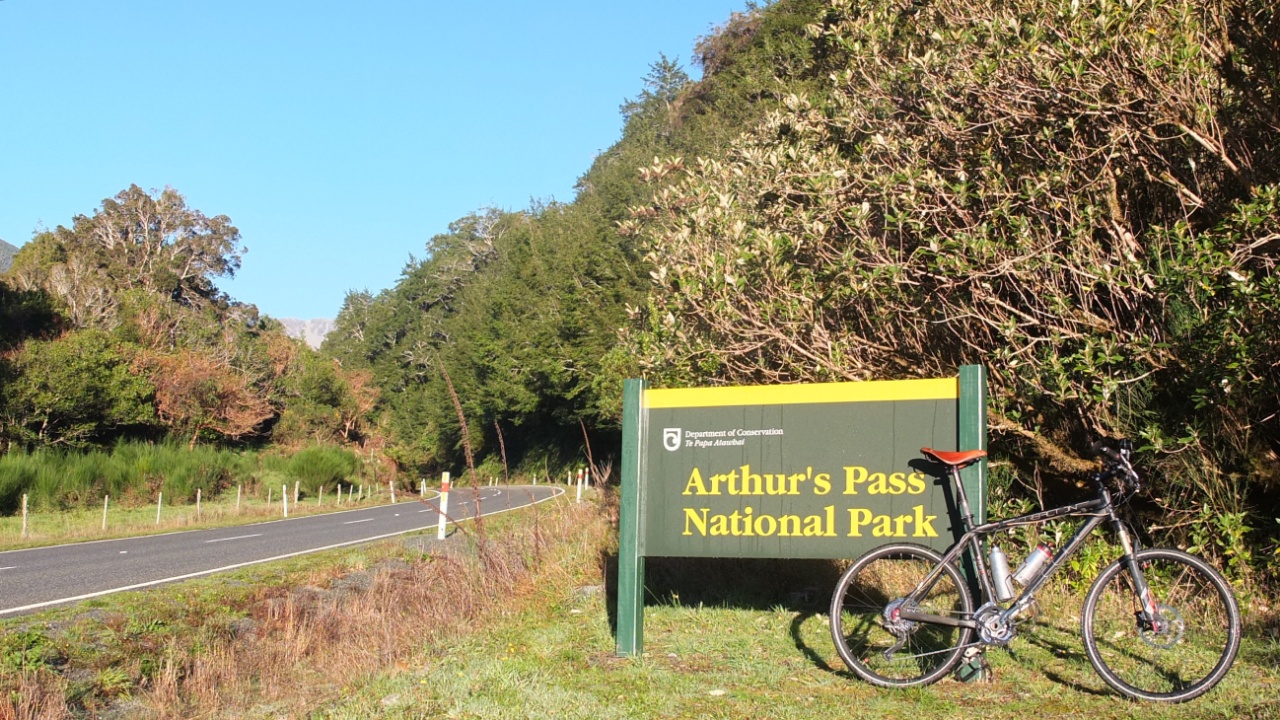 Today, I’m going to visit Arthur’s pass, then come back to Jacksons and finally take another road to go next to the lake called Brunner. That’s the third day without any cloud and certainly the best one the reach the higher saddle of southern Alps. I’ve hidden my trailer and I will come back to pick it up. That way, I will be much lighter to climb the 16% steep slope! Here we go! 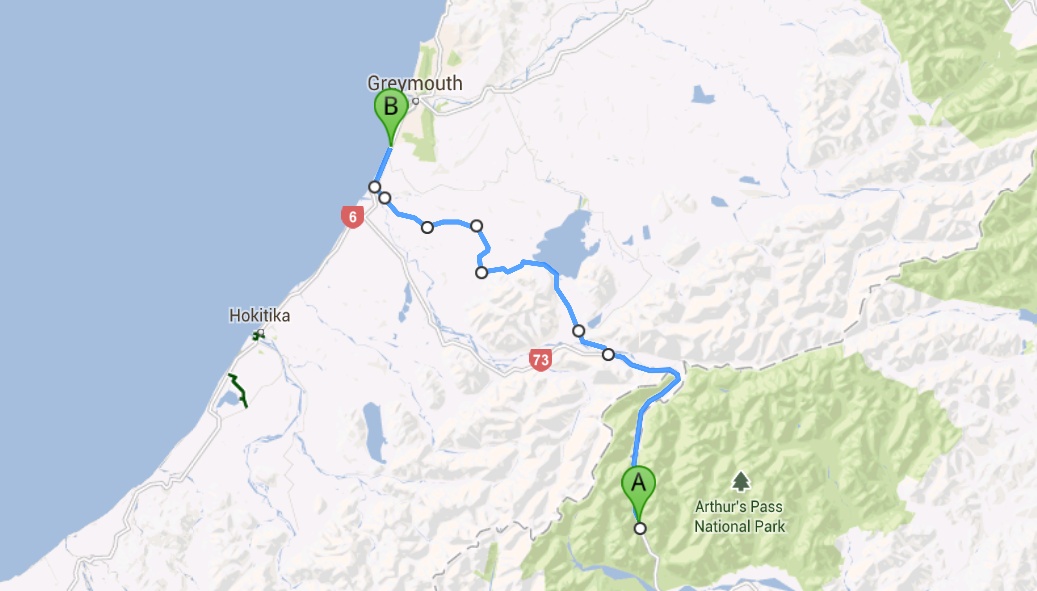 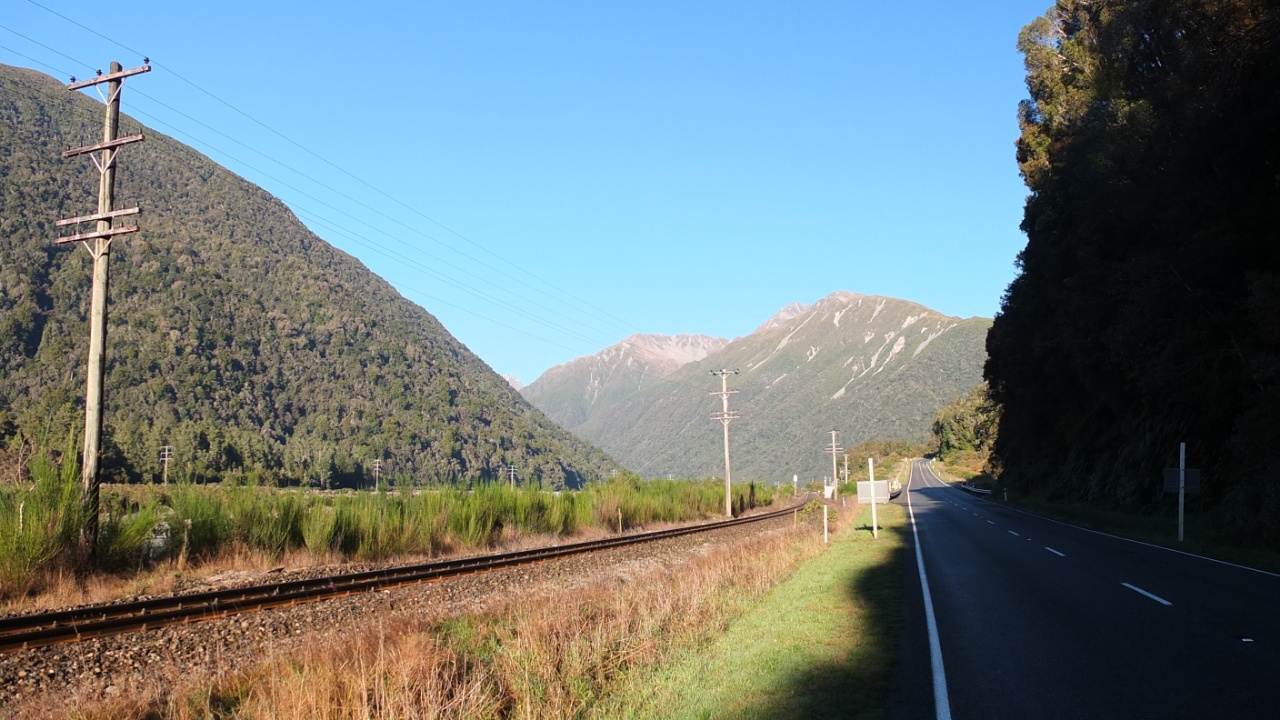 The road is not really steep now but it’s coming, I know that :-) 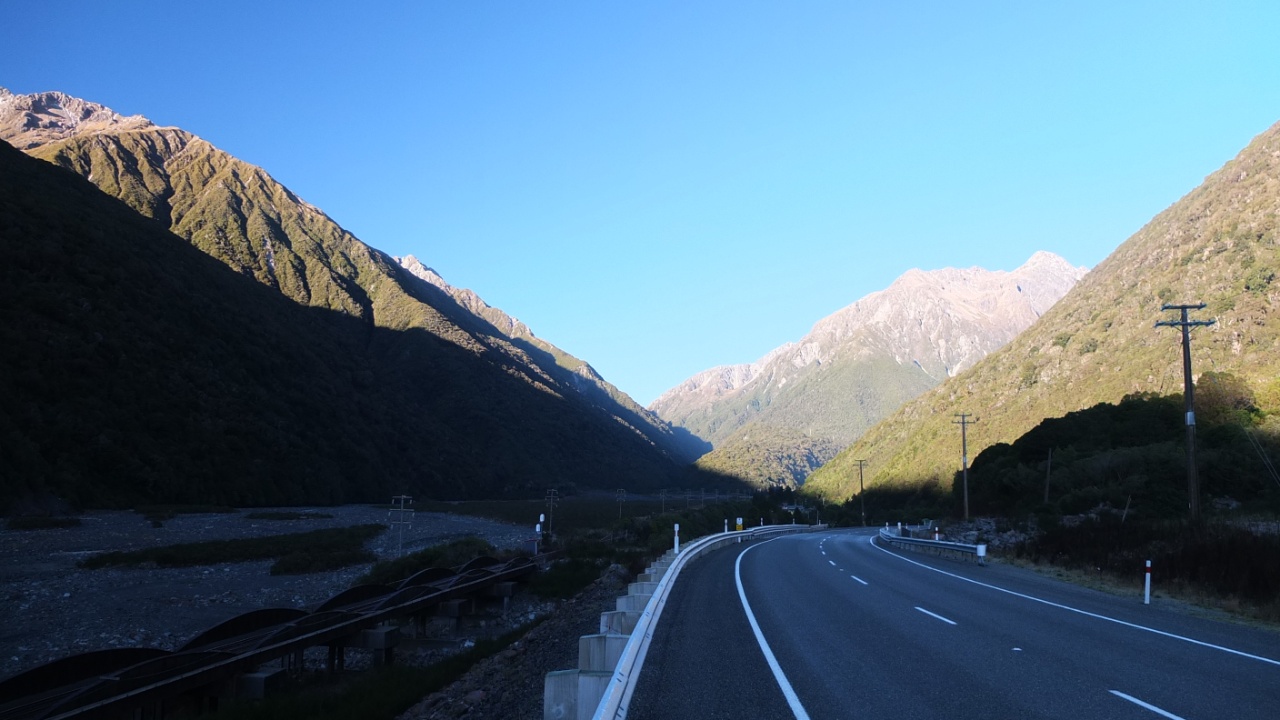 Hmm, it should turn right I think. 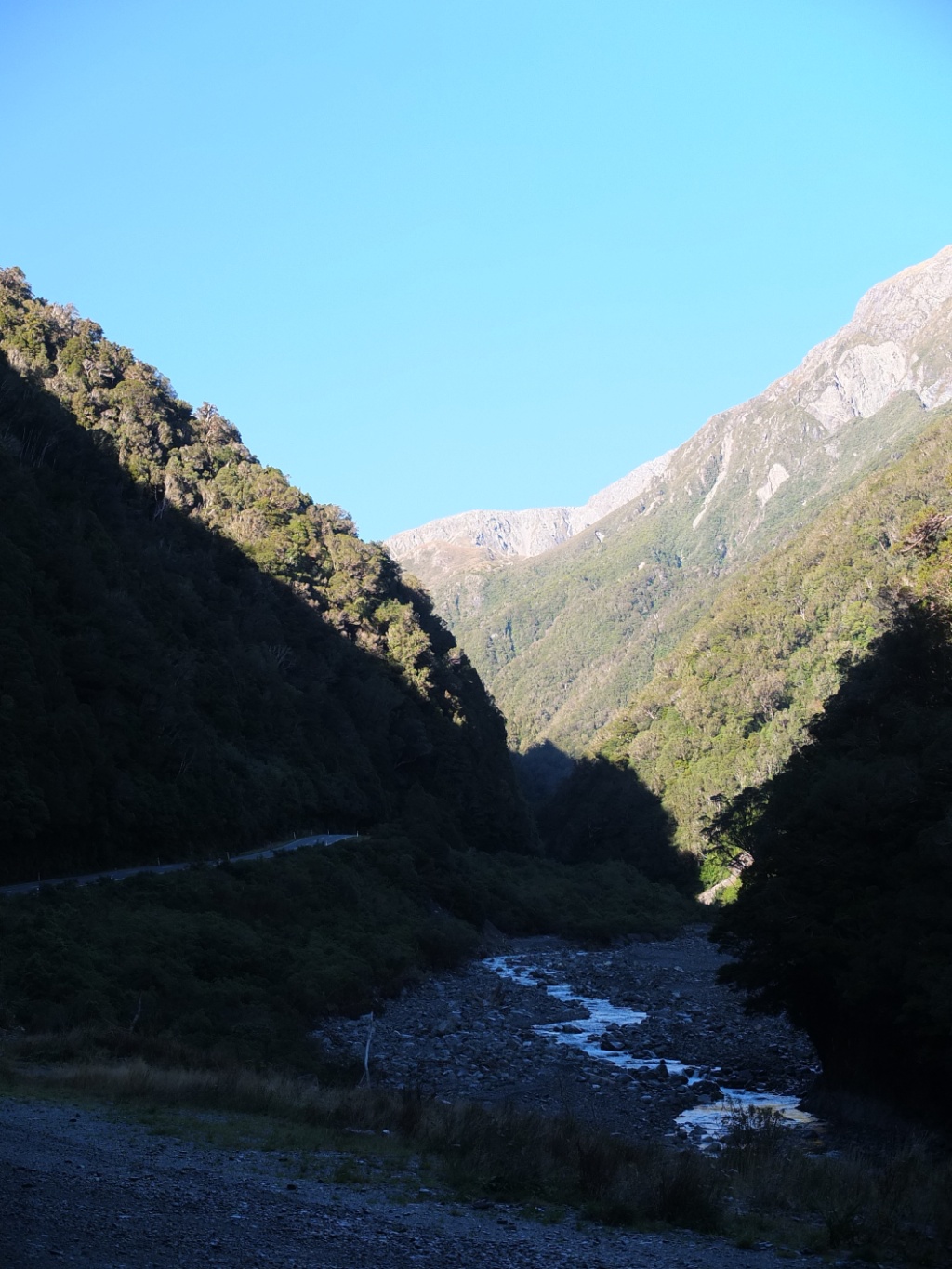 I was wrong because the road passed a bridge and I’m now riding through a narrow gorge. 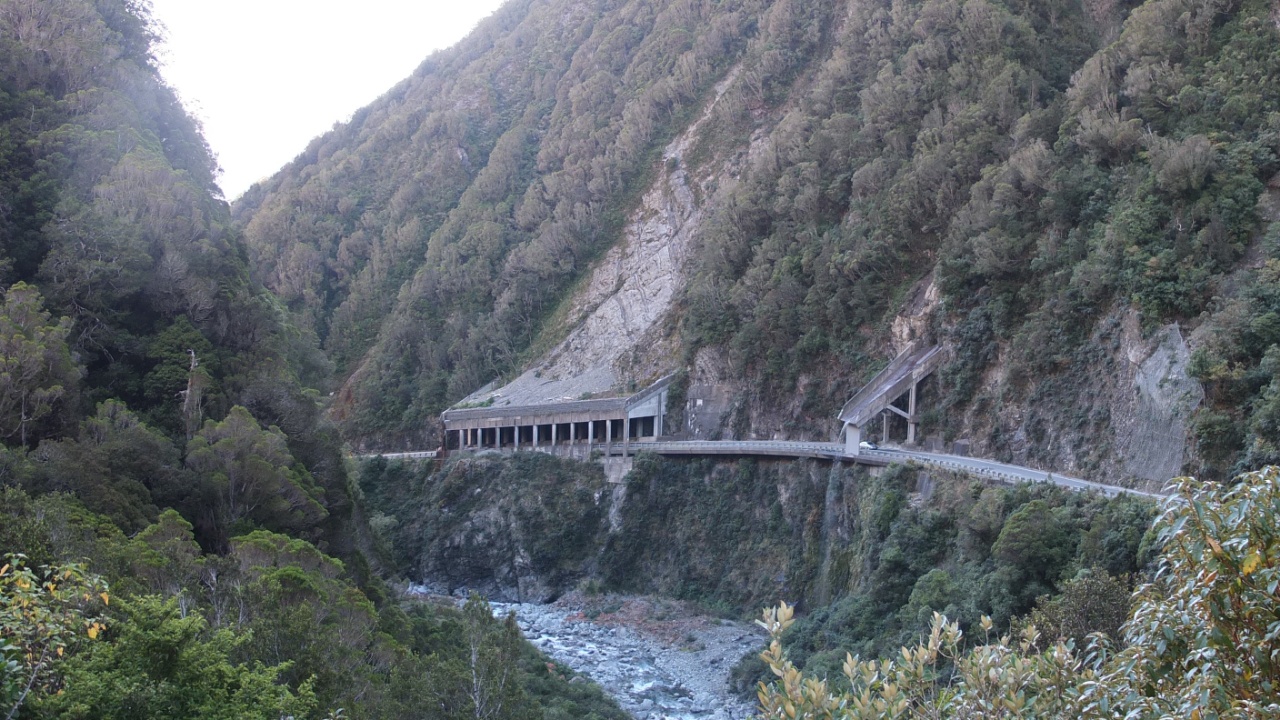 I’ve just climbed one of the steepest part but it looks flat in that picture… I will take a video of the way down later. It should be better :-) 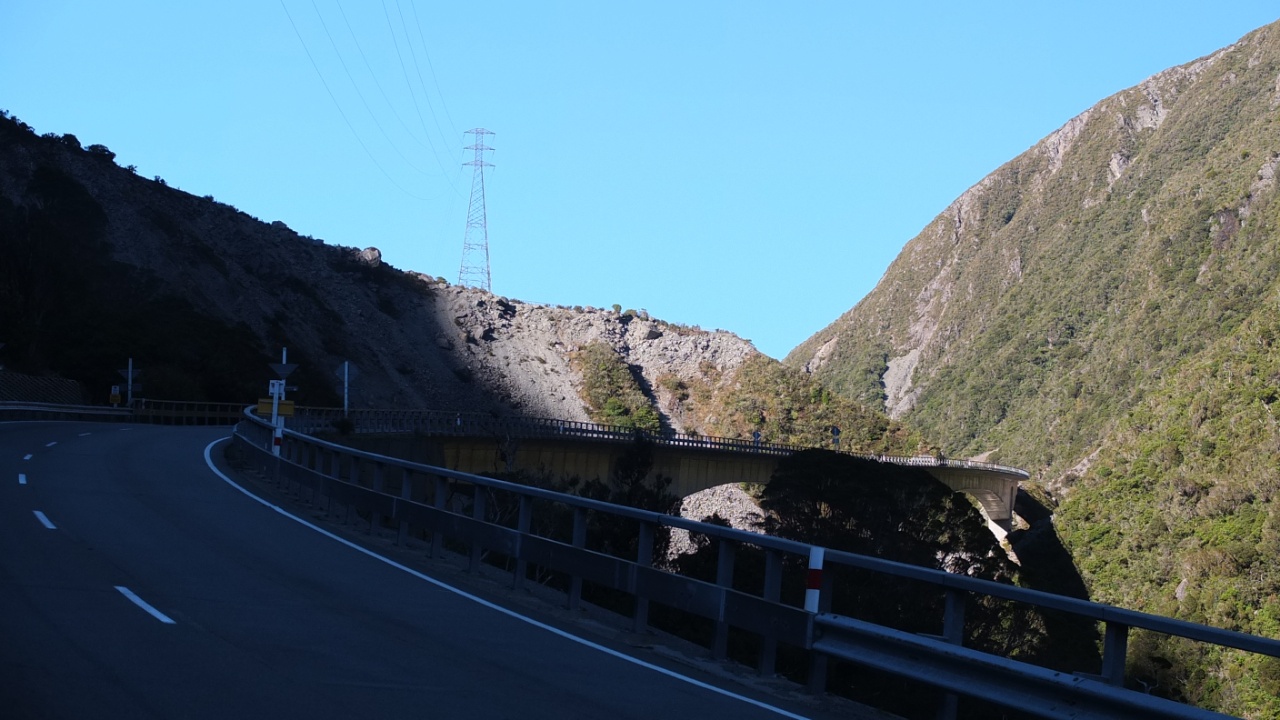 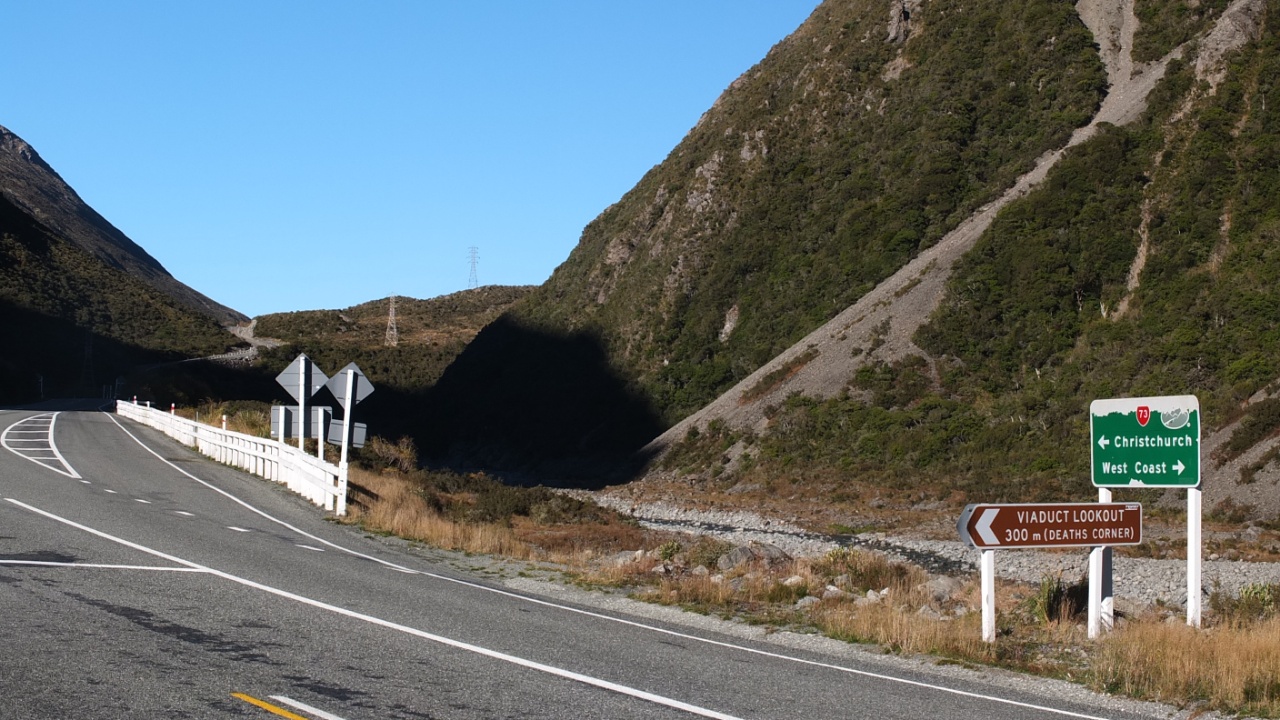 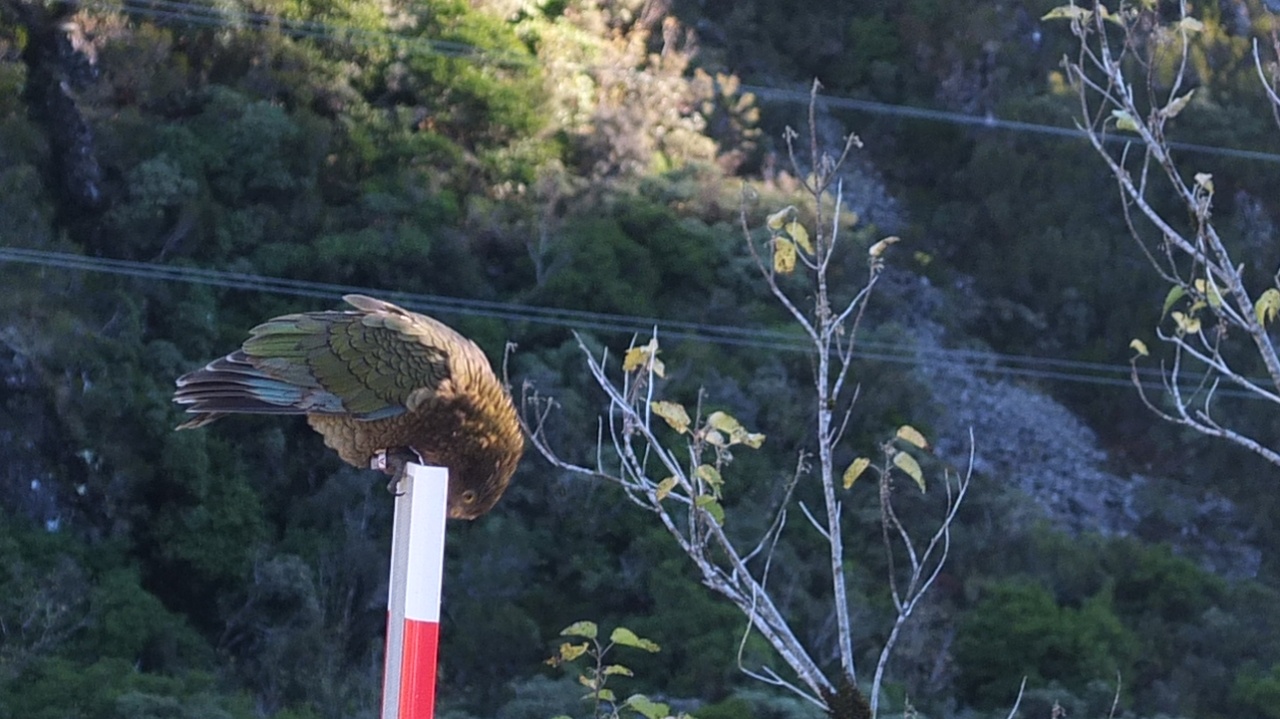 Kea! There is two and they came to see me. Remember? These are the birds who like to chew rubber and I have some on my (my tires). “Stay away from me ok birds?”. 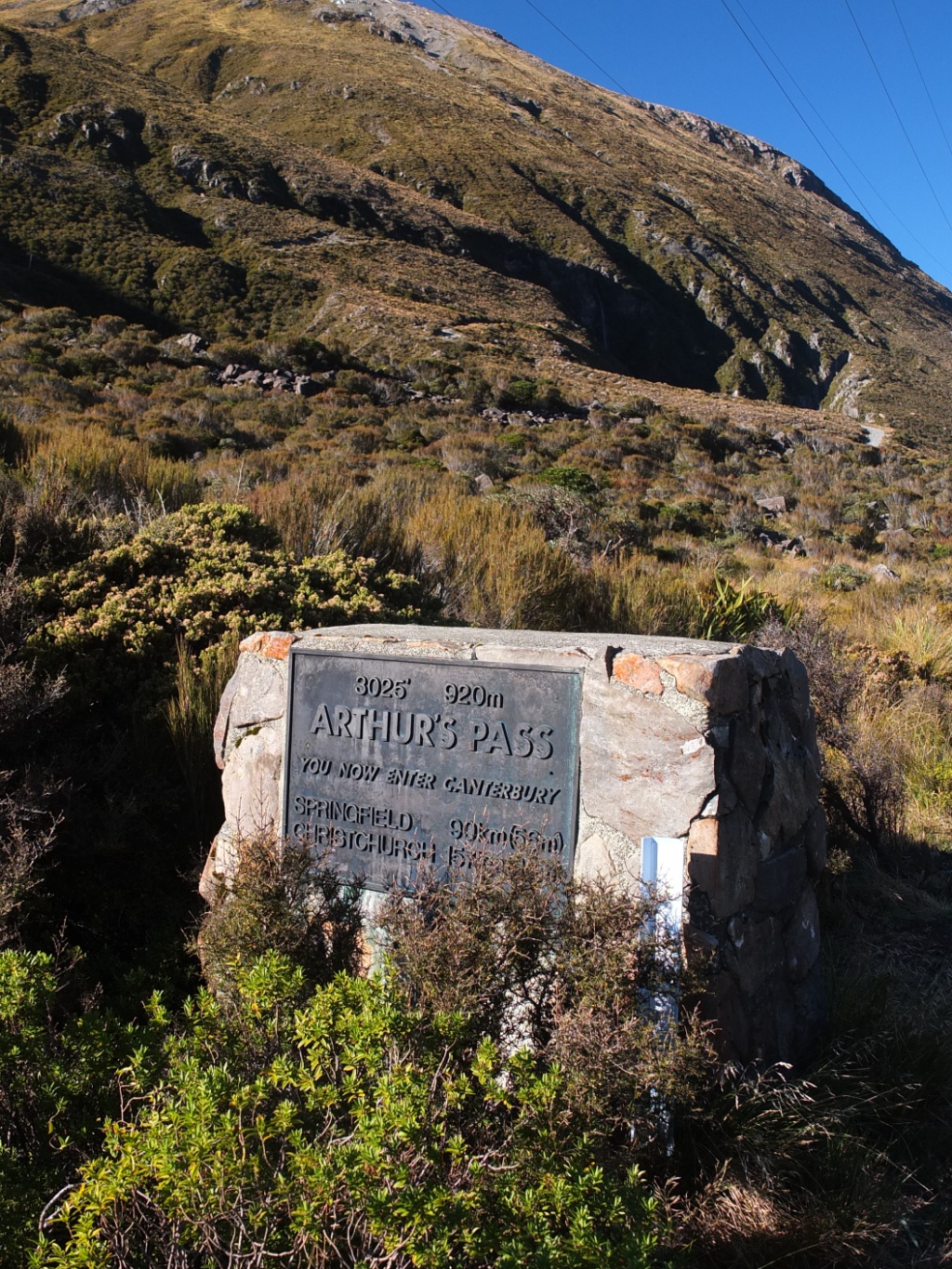 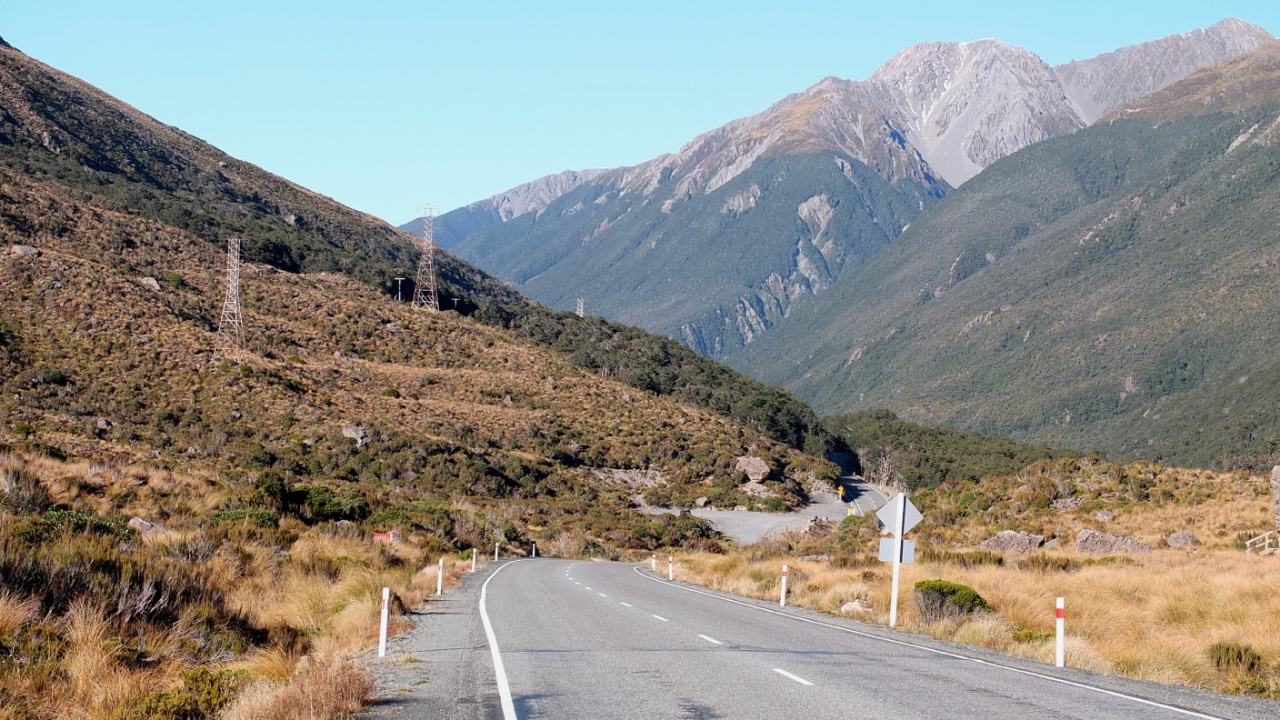 Hmmm, I would like to see the view on the other side or at least I could go to the village. Let’s see how look that village. 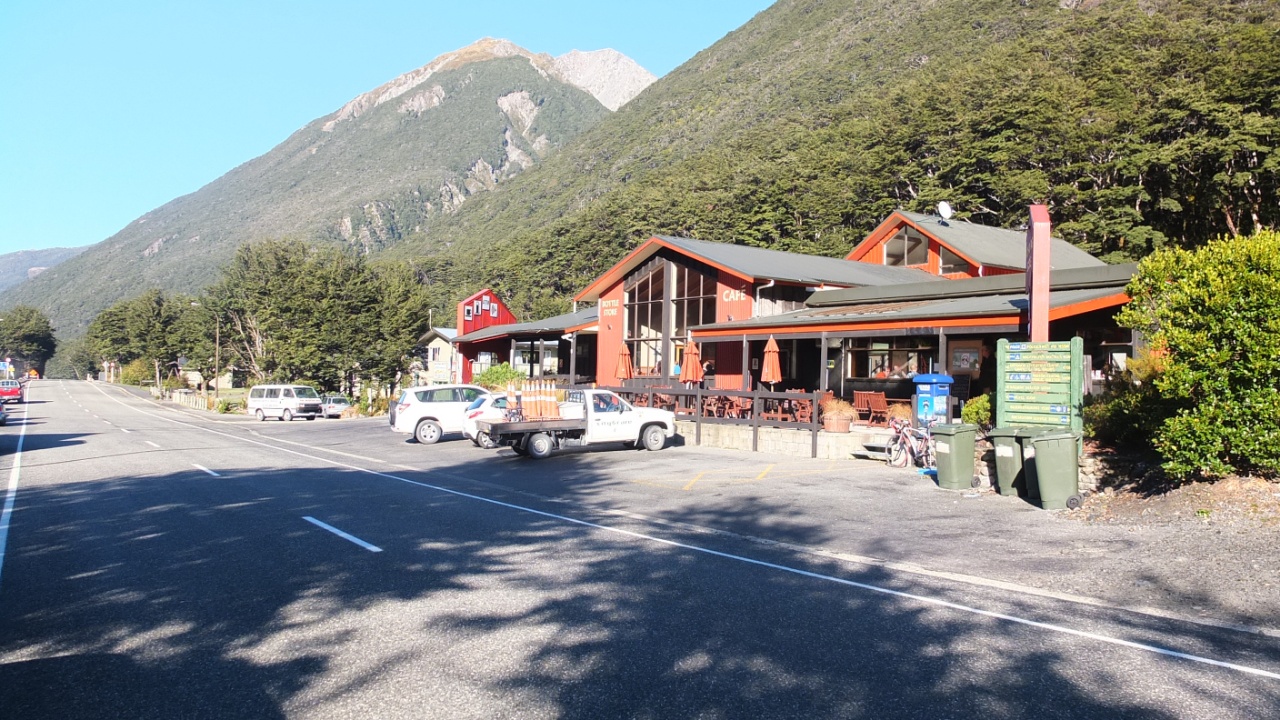 This is Arthur’s pass village, 250 metres down from the pass. 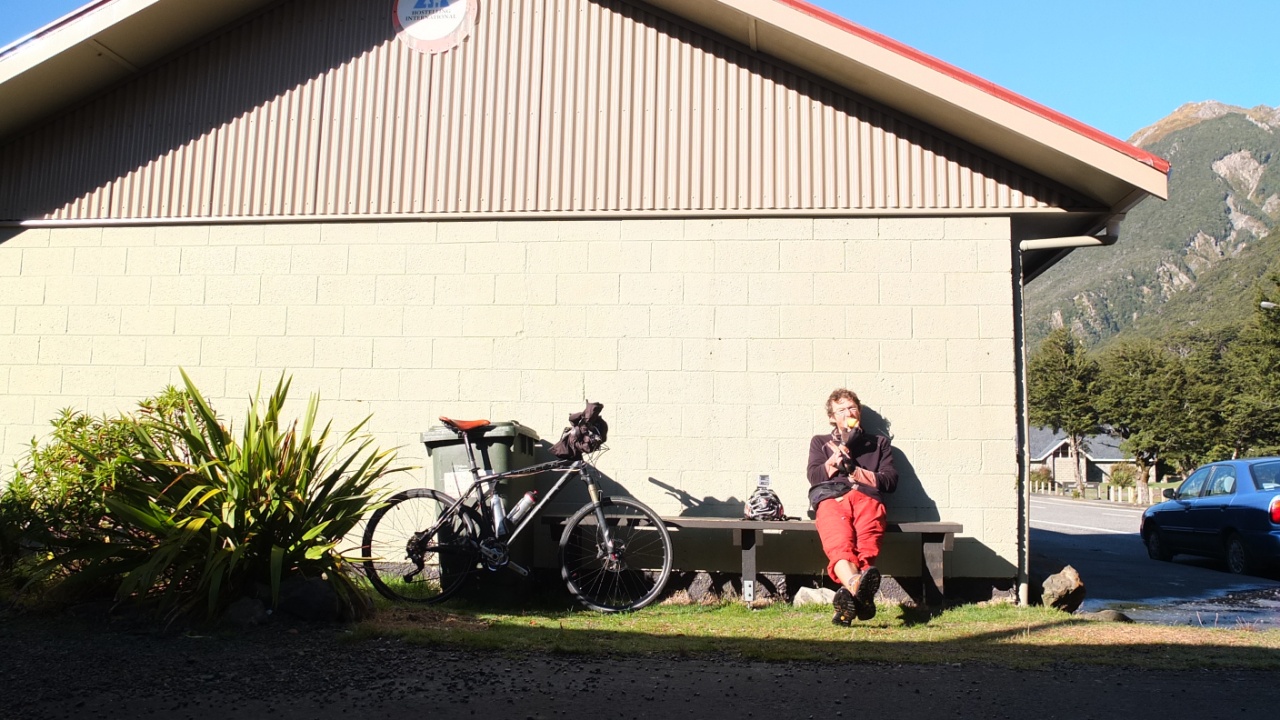 Break time :-) One apple + one cereal bar. The guy from the cycle shop in Hokitika gave me to cereals bar as a gift. It’s nice but he also told me that they are expired since one year… I’ve ate one yesterday already and nothing was wrong so, let’s have the second and last one :-) 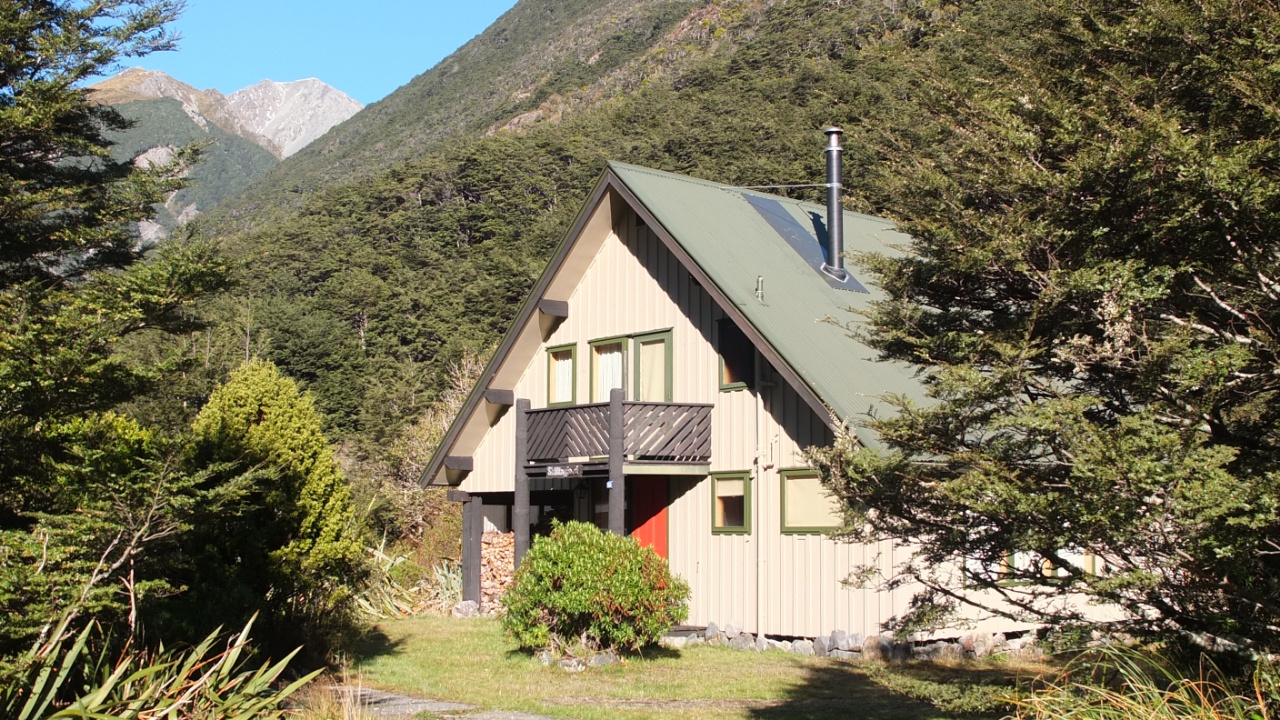 That’s was a short break but I want to keep myself warm because I have to come up hill again until I reach the pass and then it’s gonna be downhill all the way till my trailer. 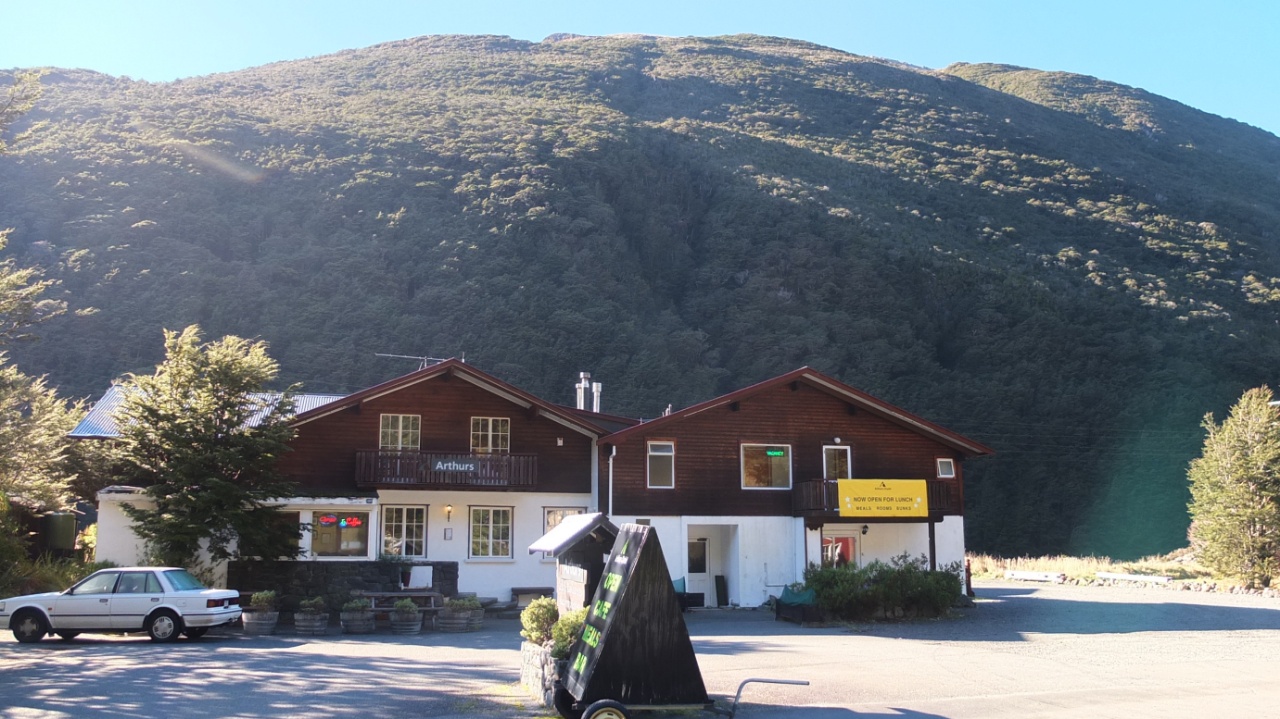 They build the houses and restaurant with alpine style. I’ve learnt few days ago that there is not any ski field stations within the village. So every time you have to drive to go to the ski area. The stations are certainly too small to have a village with hotels, shops and restaurants. 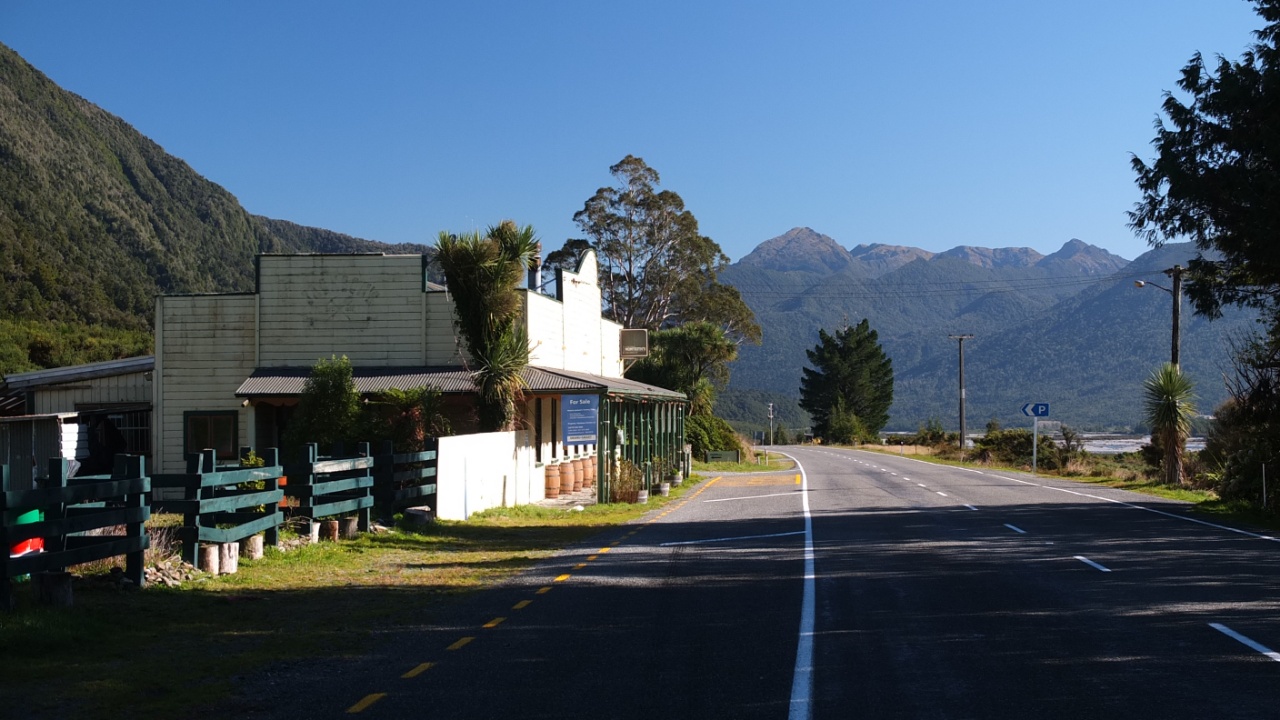 Fouah! The downhill was good and I’ve now reach Jacksons again where I’m going to have my lunch. I met a cyclist on the way down. He invited me to his home tonight. He gave me his address because he is much faster than me. I’m not sure if I will reach the lake today, I will see how I feel. 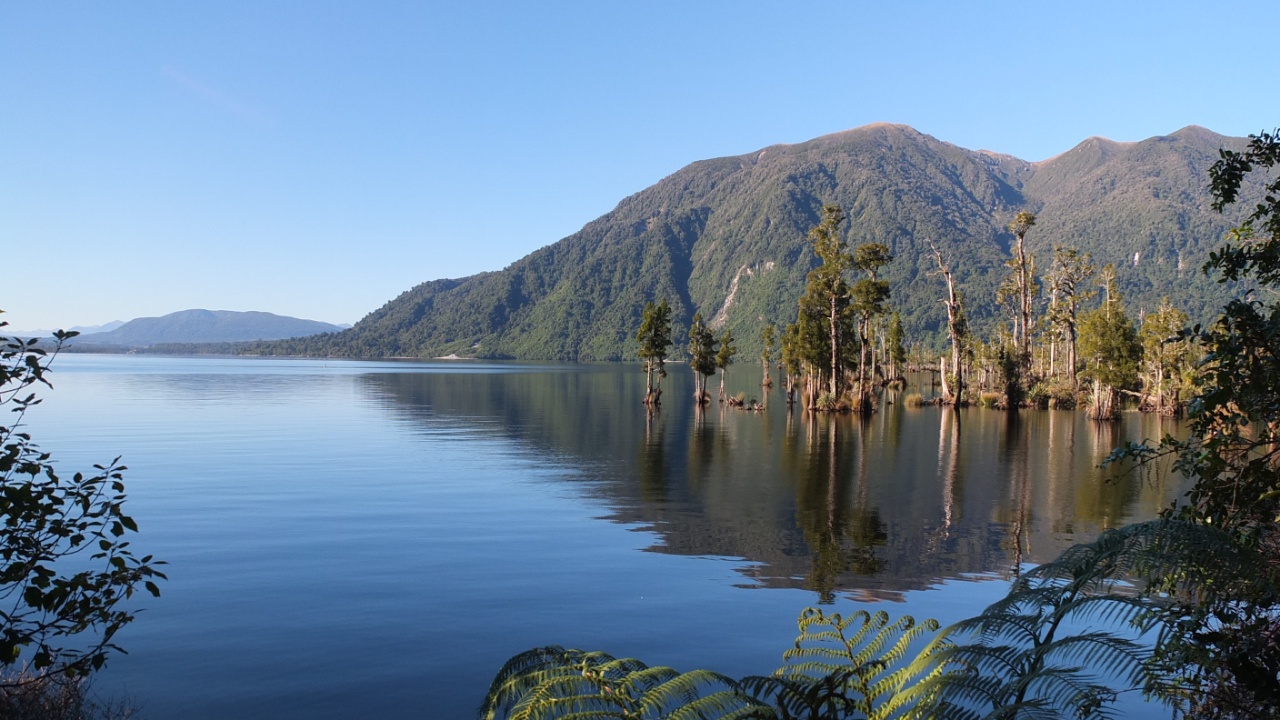 Lake Brunner! I realised that I’m on the wrong side… I’ve took the wrong road and I don’t feel coming back now… I guess I won’t meet the cyclist man again. Rah! Too bad… 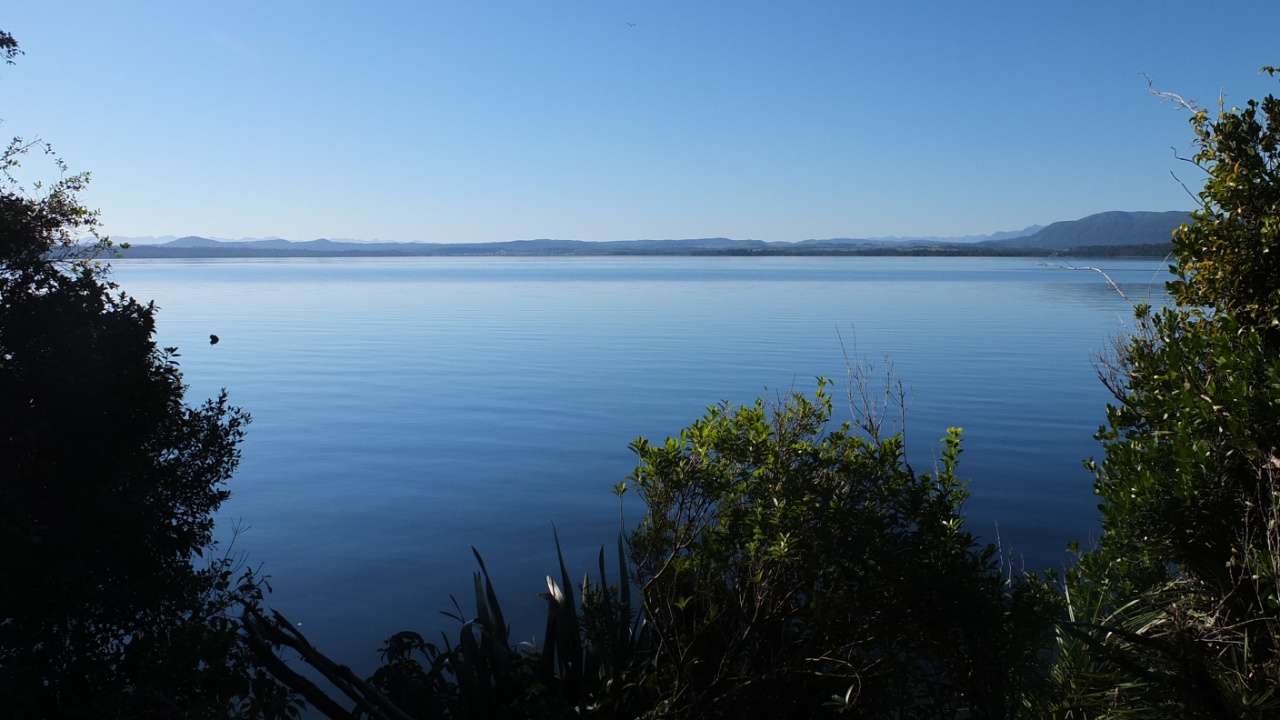 I should be there on the opposite side. If that lake was smaller I would have turned around and go the other way but that feels pretty far away now and I’ve done lots of kilometres already. I don’t have enough energy for today. 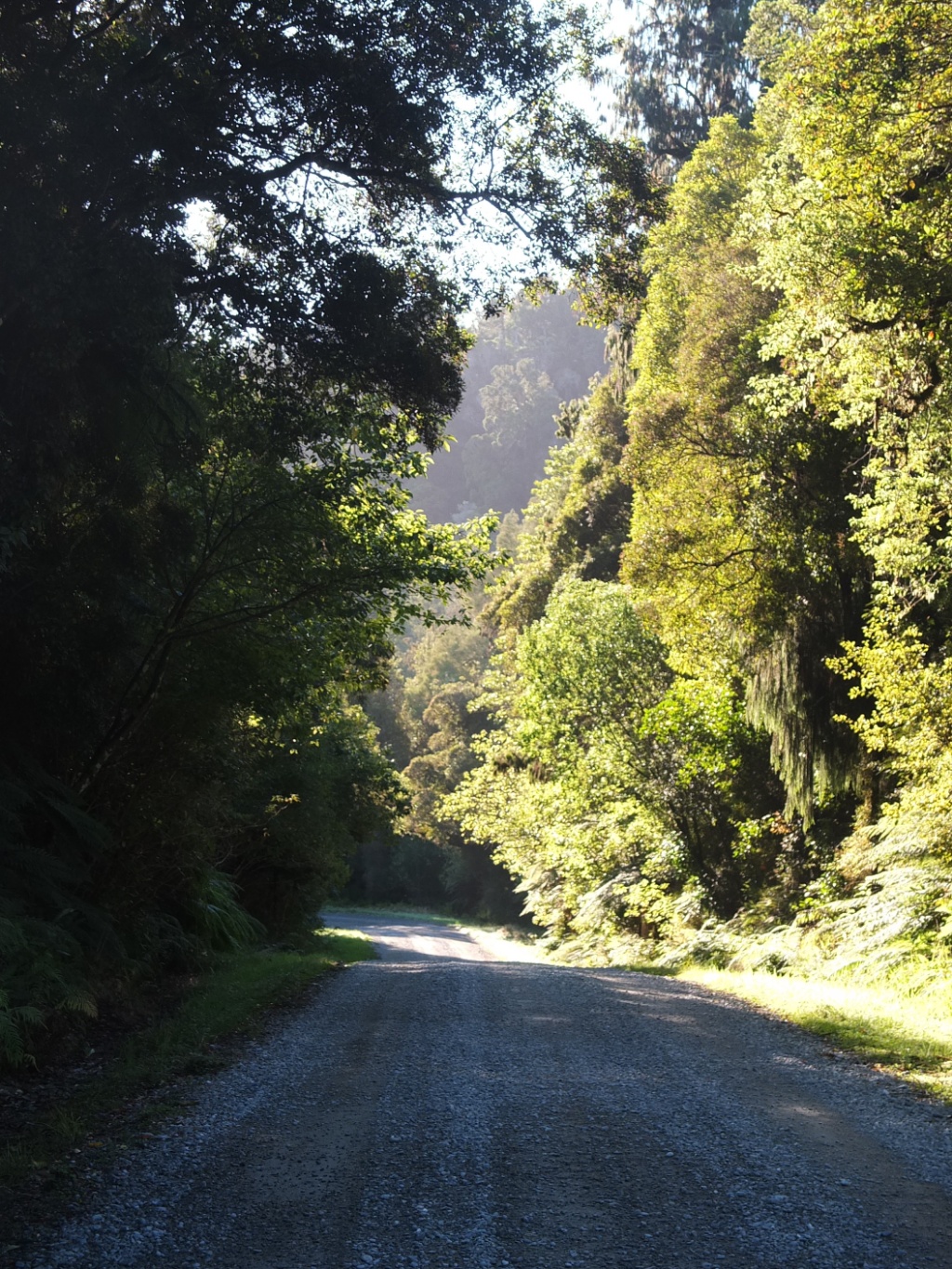 Finally this gravel road is going down! I was really getting angry. I’ve took the wrong road and then it was only going up hill during an hour maybe! I’m in the middle of nowhere and my last bottle of water is nearly empty. I’ve seen many information panels with the mention “poison, don’t drink water” so, no more water. And I need toilet! Rah! 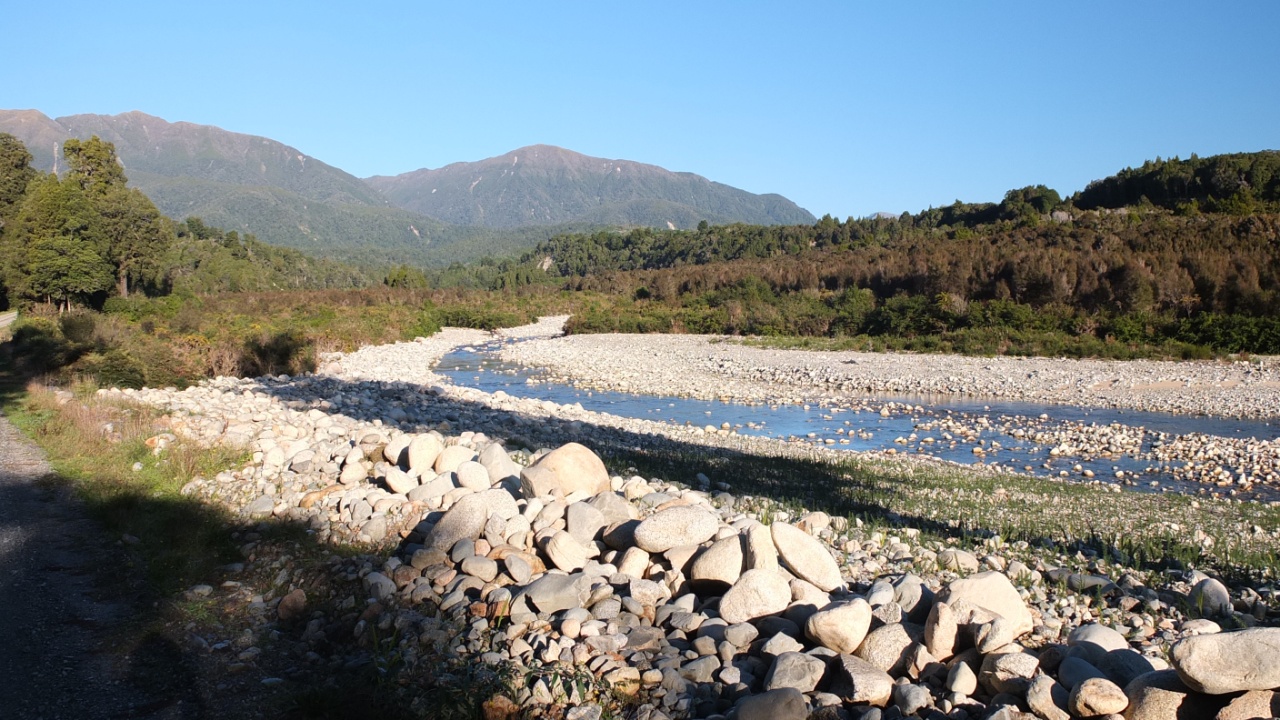 I’m now going downhill beside this river and I think I will be able to join the next city today, finally! 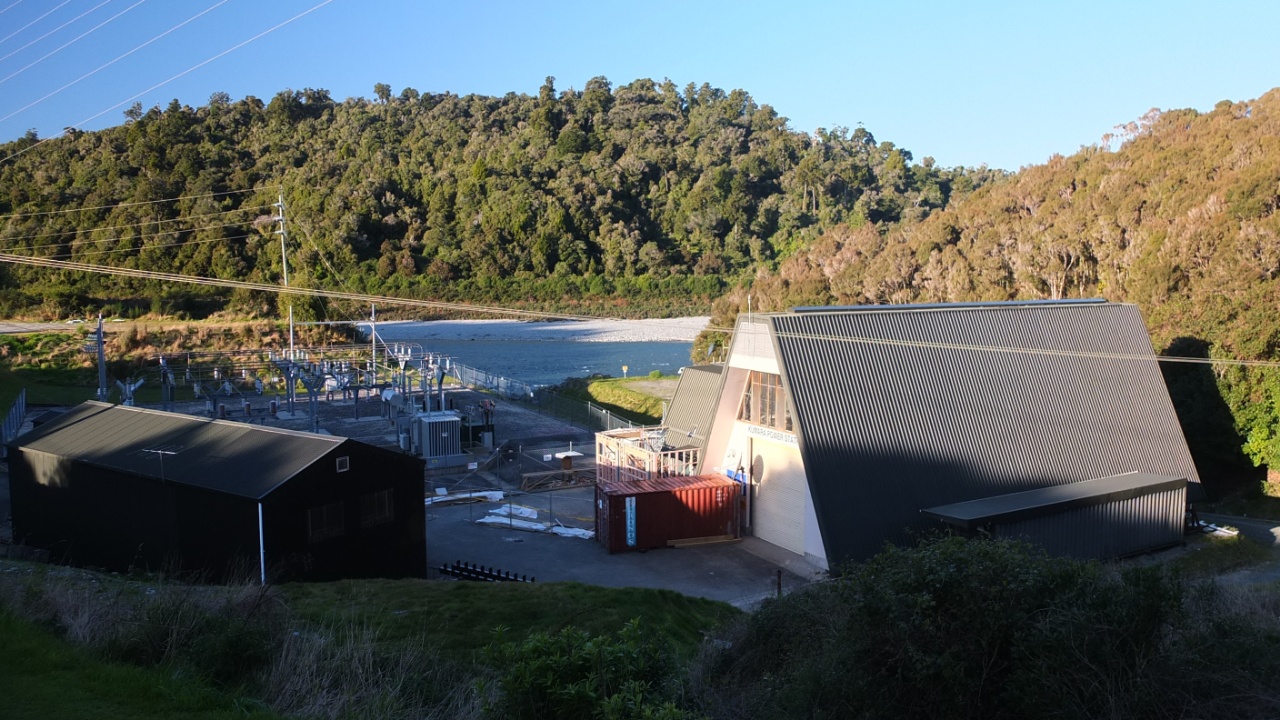 That’s Kumara power station. I’m not far from the city I think. Go! 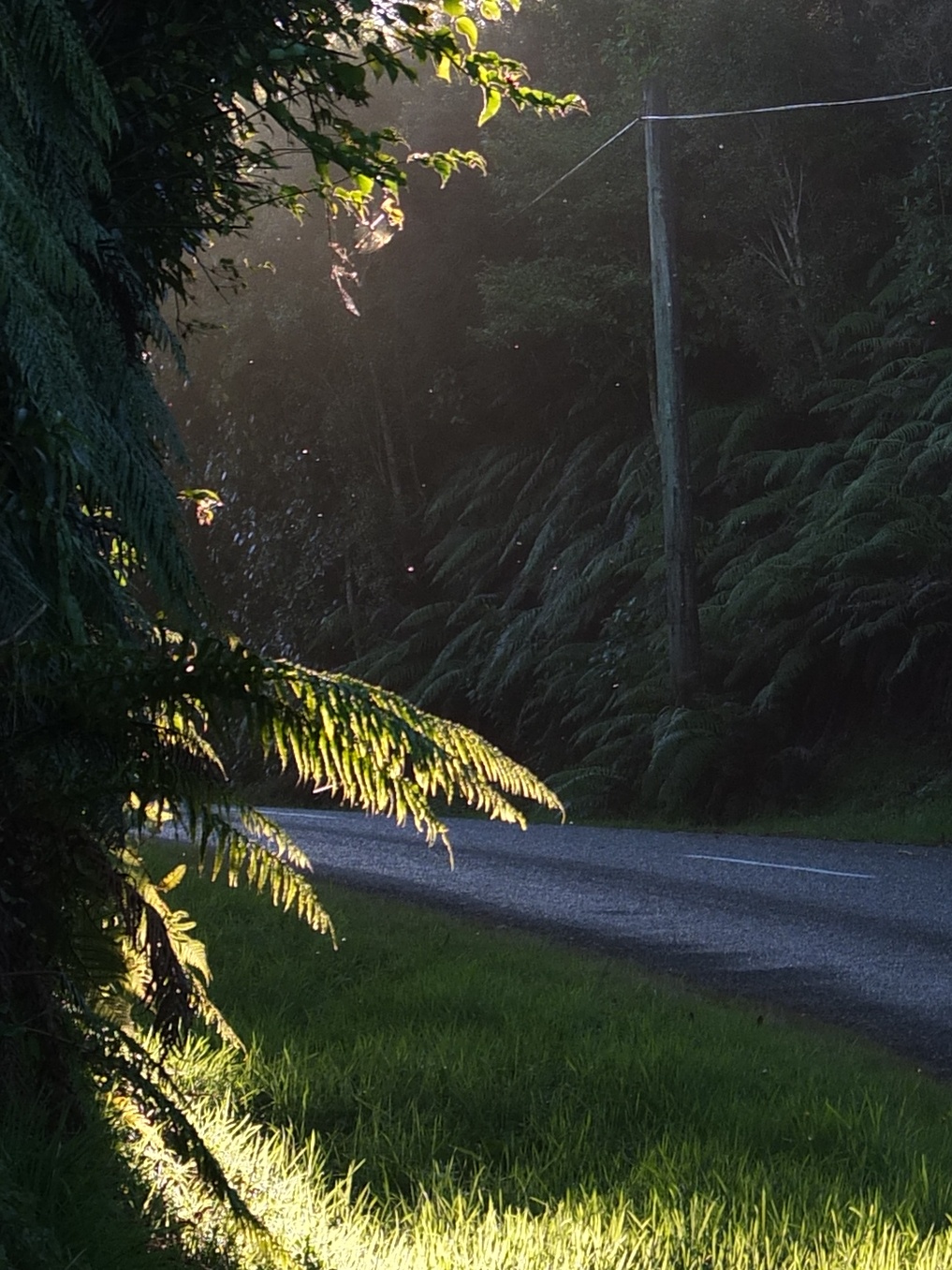 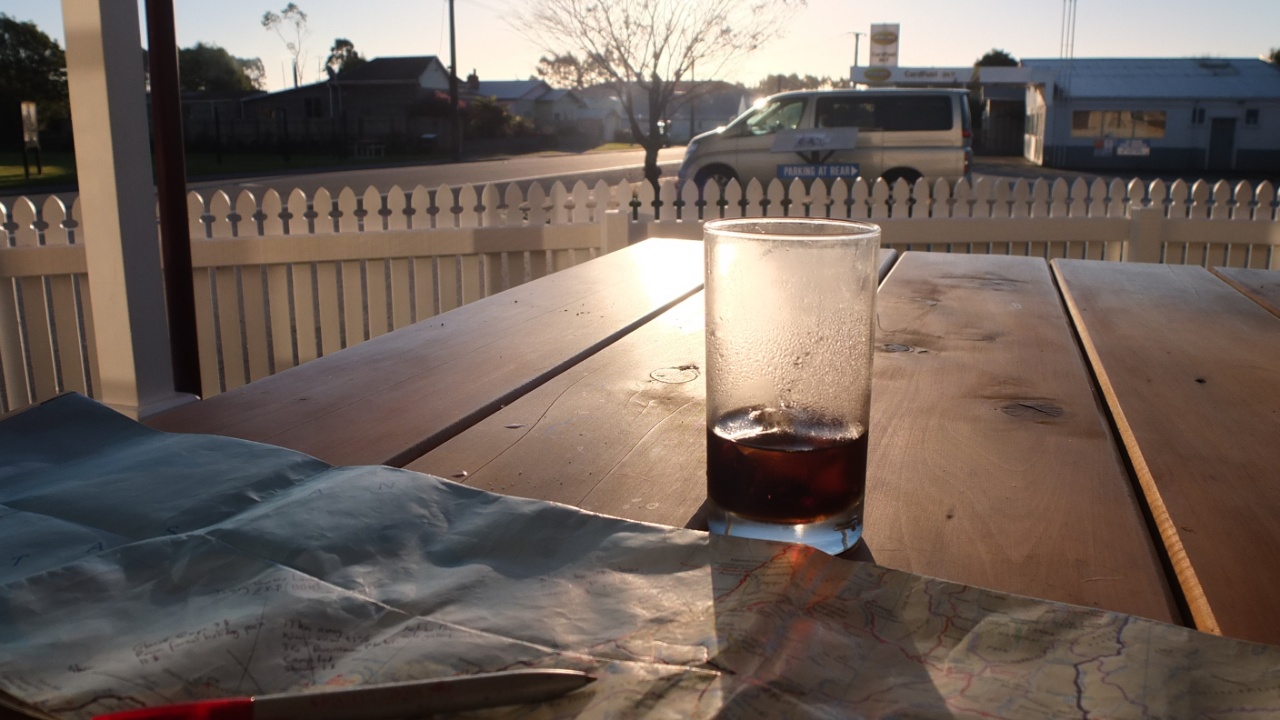 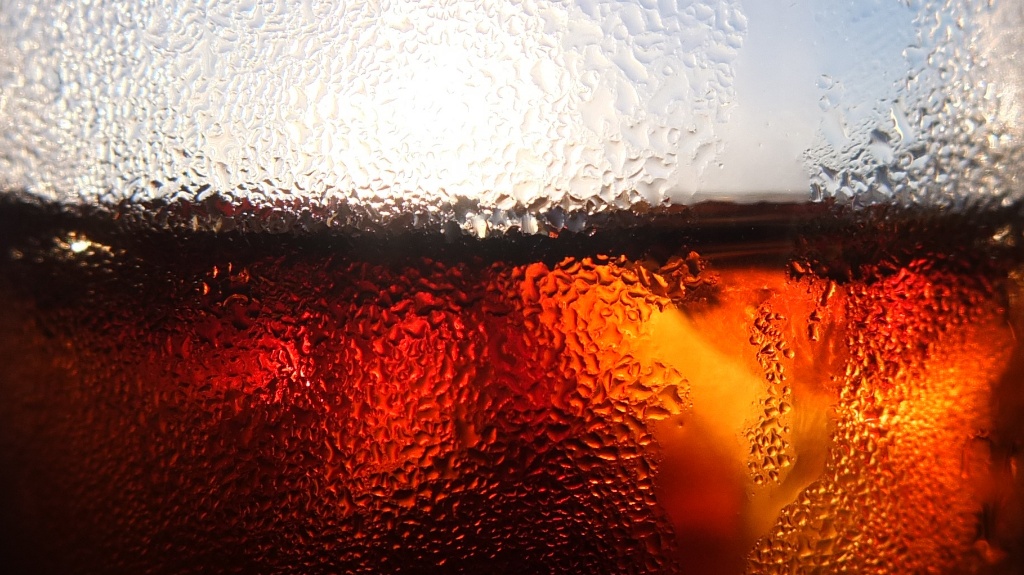 … a Coca Cola full of sugar and… 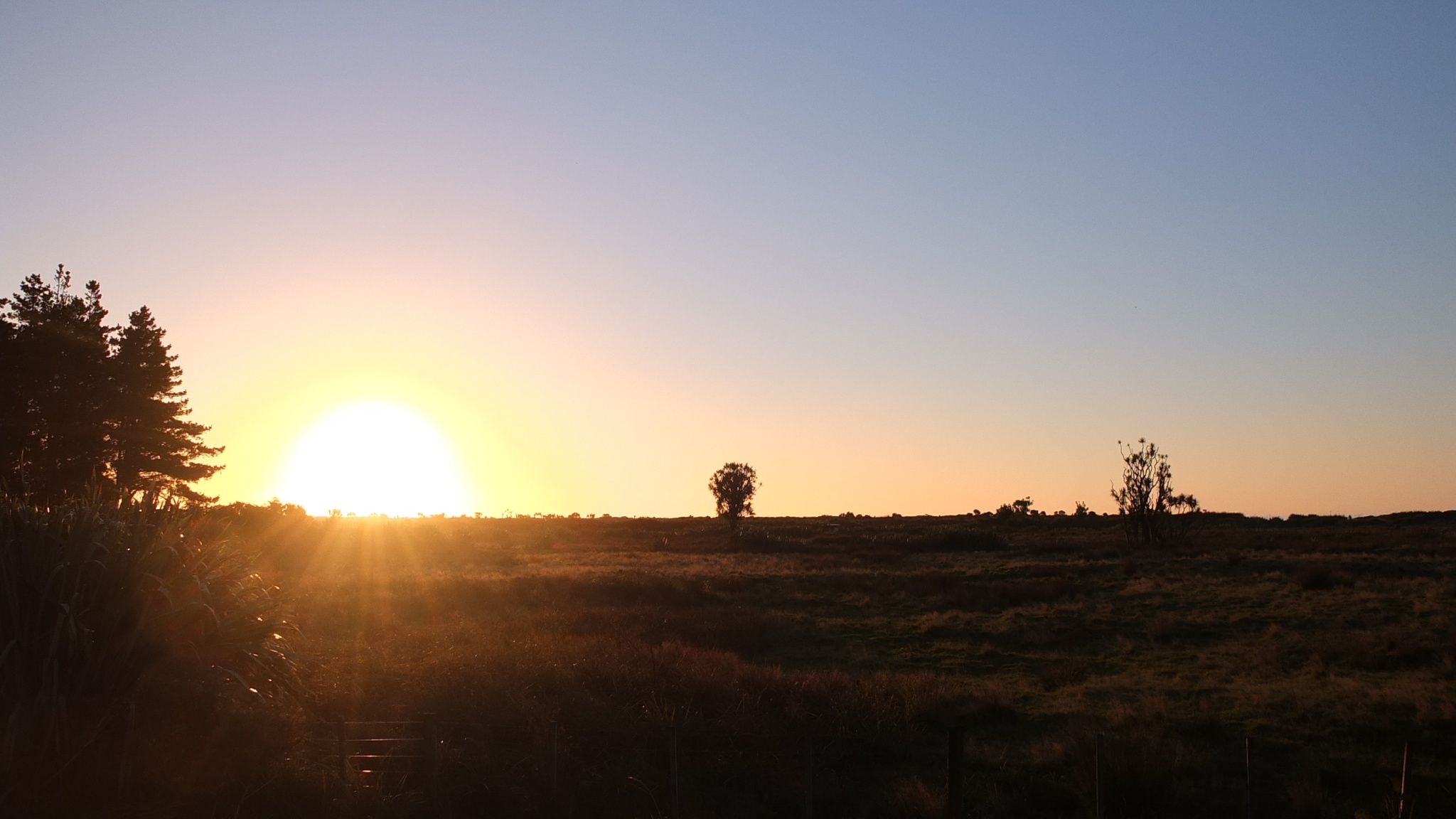 … let’s continue because I would like to see the sunset. I missed it last time in Hokitika. 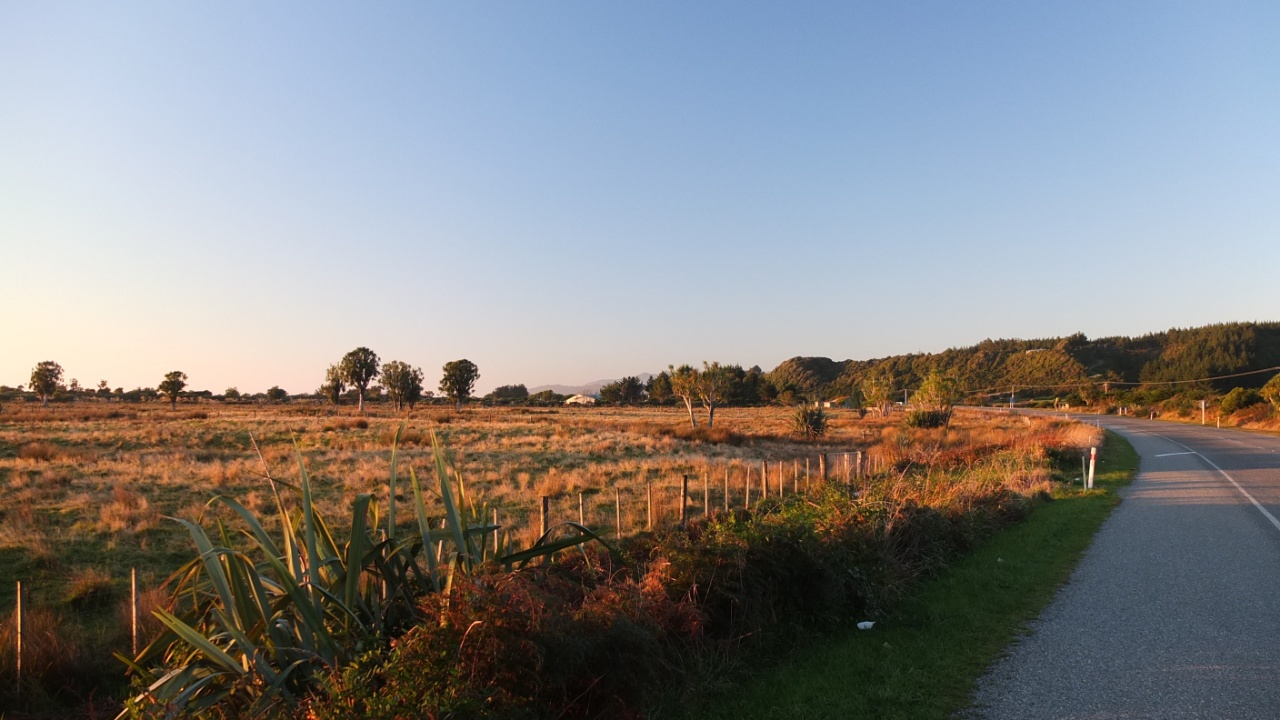 I don’t how I can continue cycling? I’ve made Arthur’s pass and more than 100km today! 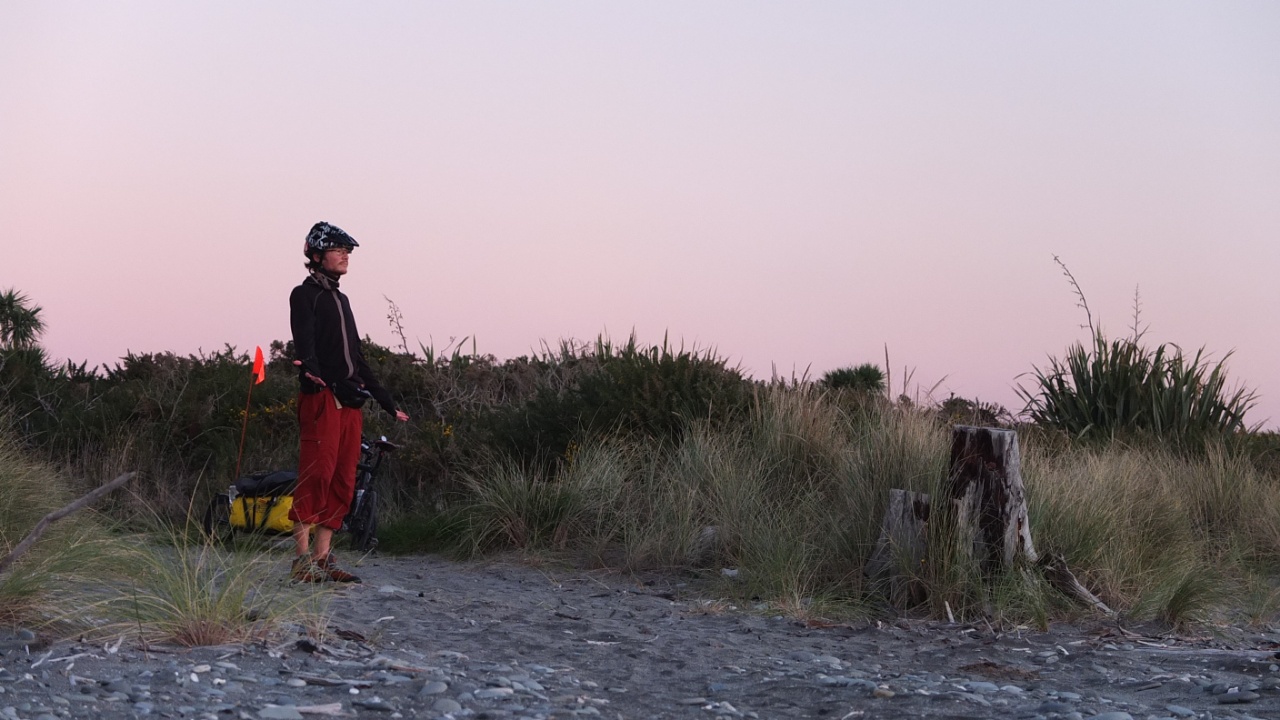 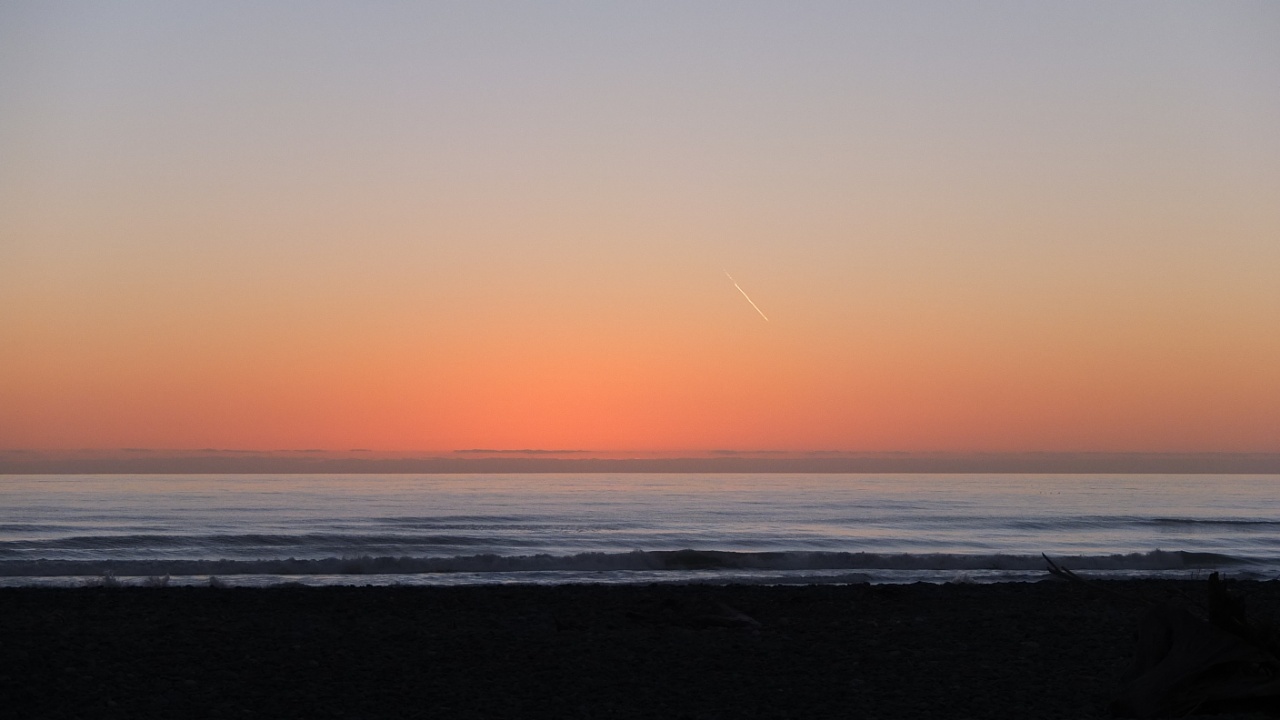 … too late… Again! OK, OK, let’s find a place to sleep before it gets too dark.