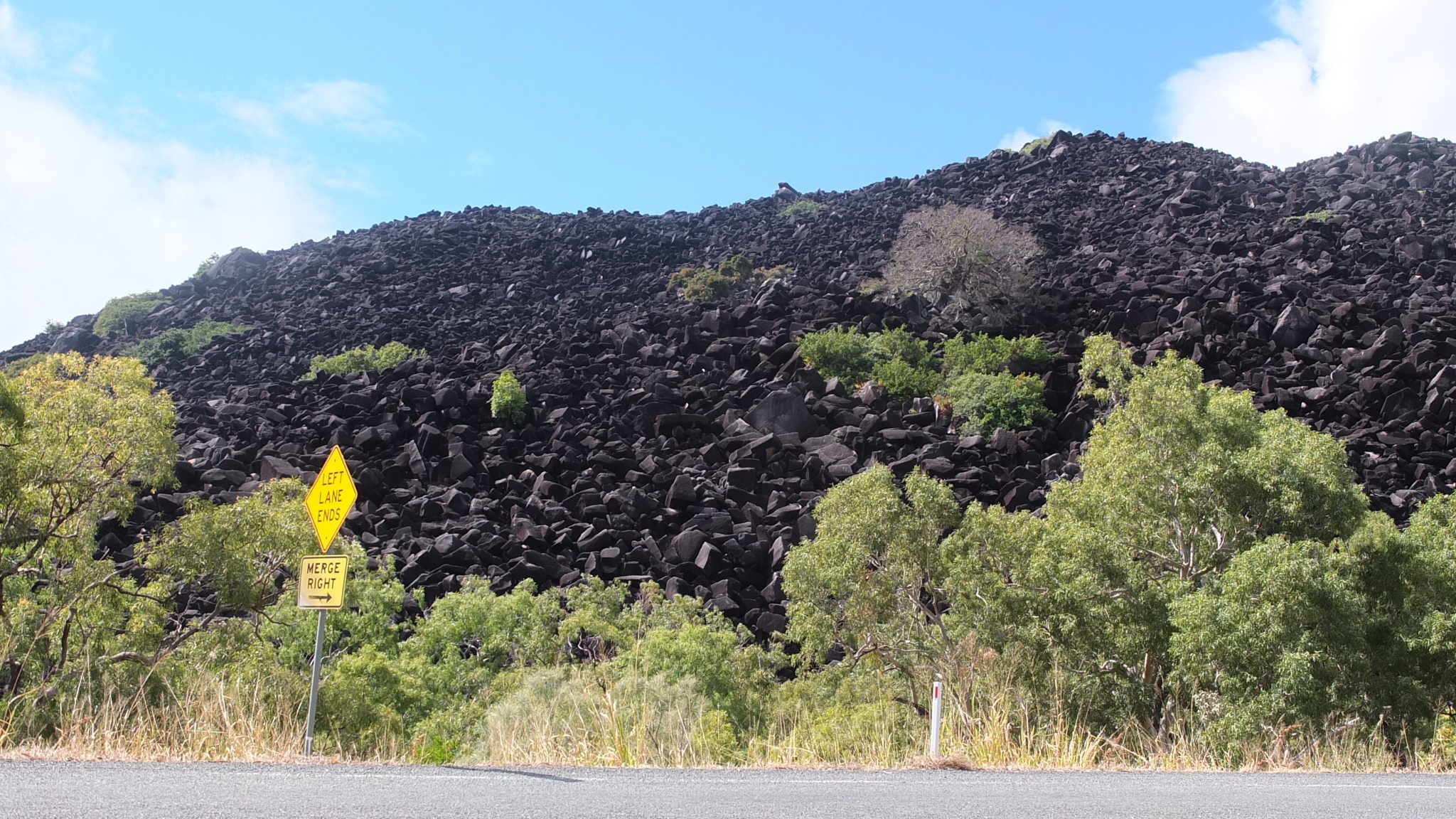 Today, direction Cooktown! Finally after all these questions I asked to myself, I’ve almost done everything I wanted. And it’s good because I won’t regret anything. Normally the road should be easier than yesterday. Since the different villages I’ve passed yesterday, the road was already easier and it’s normal I think because they need an easy access to carry bigger things. So I’m positive and hope I won’t have to push my bike as long as yesterday. I even pushed more than one year in NZ. Who said OZ is flat? 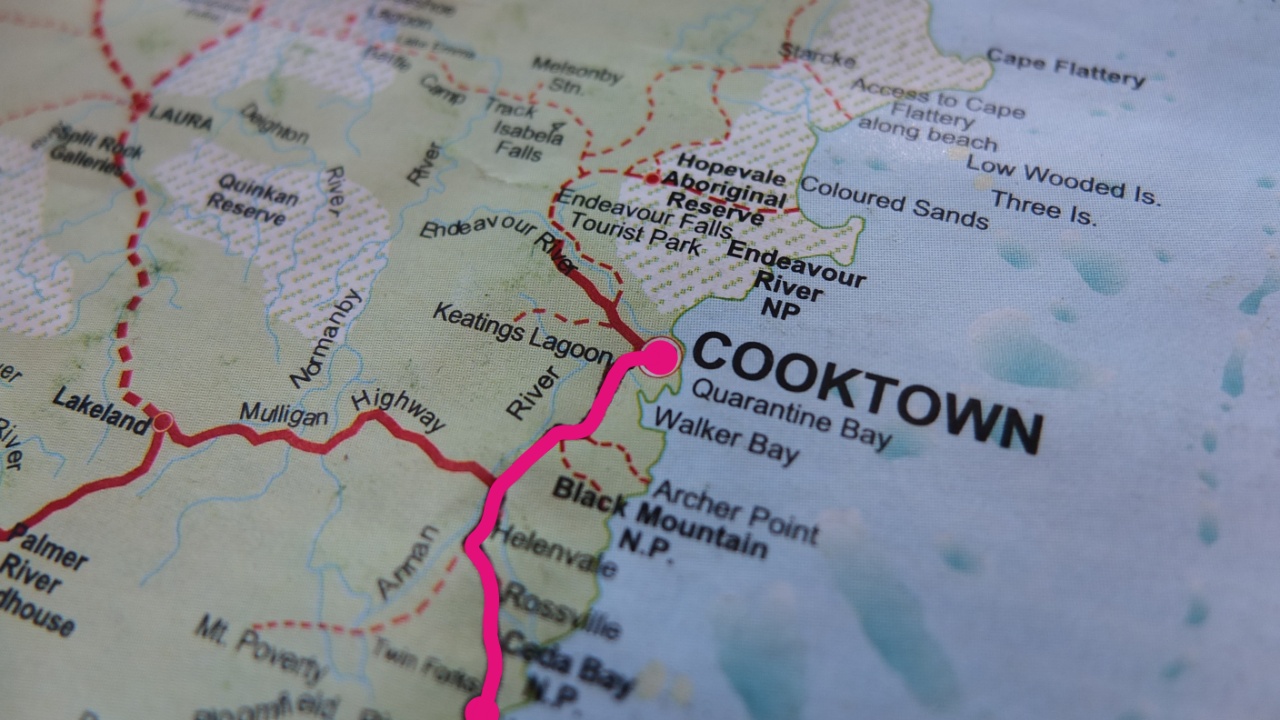 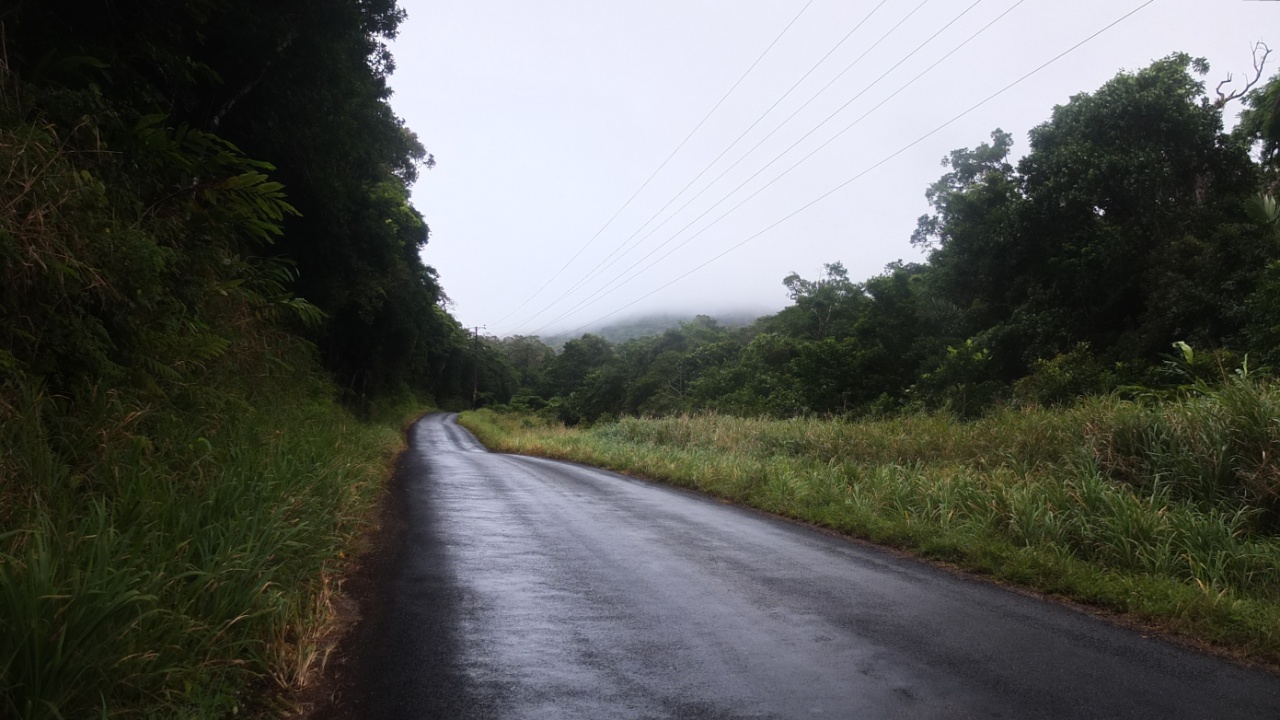 For the first time in 2 weeks now, it’s raining… I’m impressed! It’s not an heaphy rain but it’s raining! 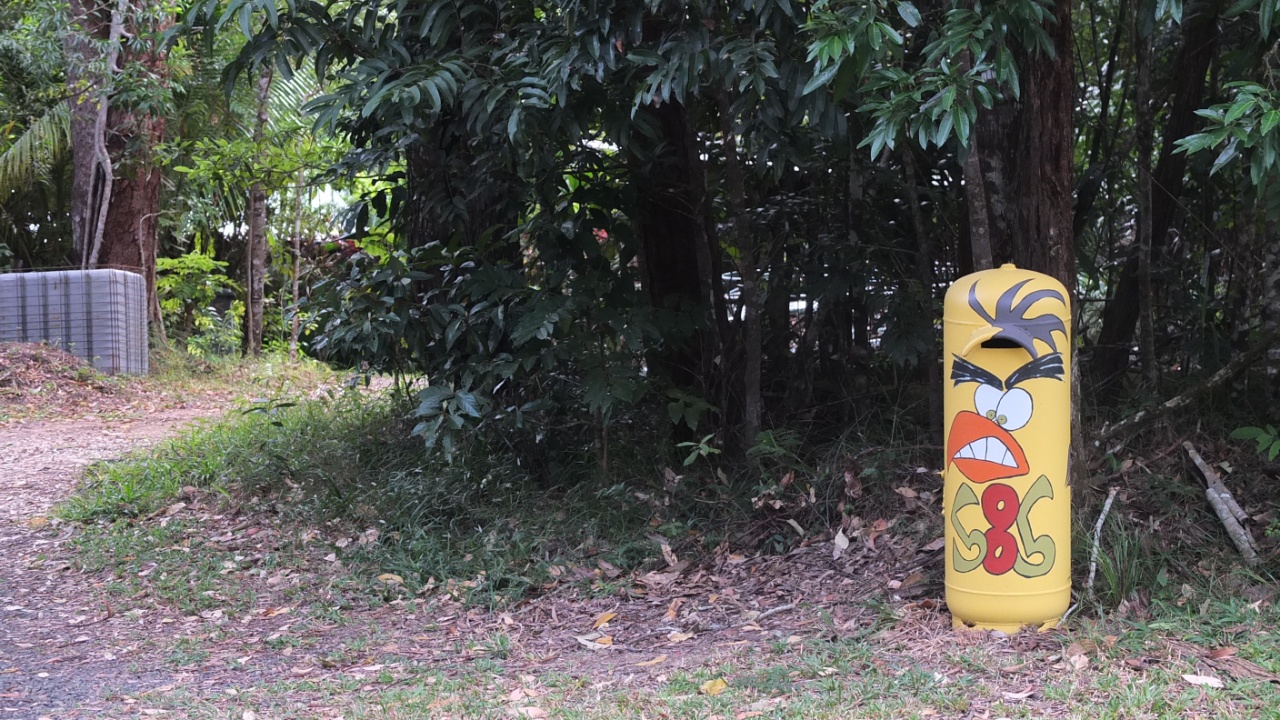 The rain has already stopped and there is the first fashion letter box of Australia. Who is going to win? 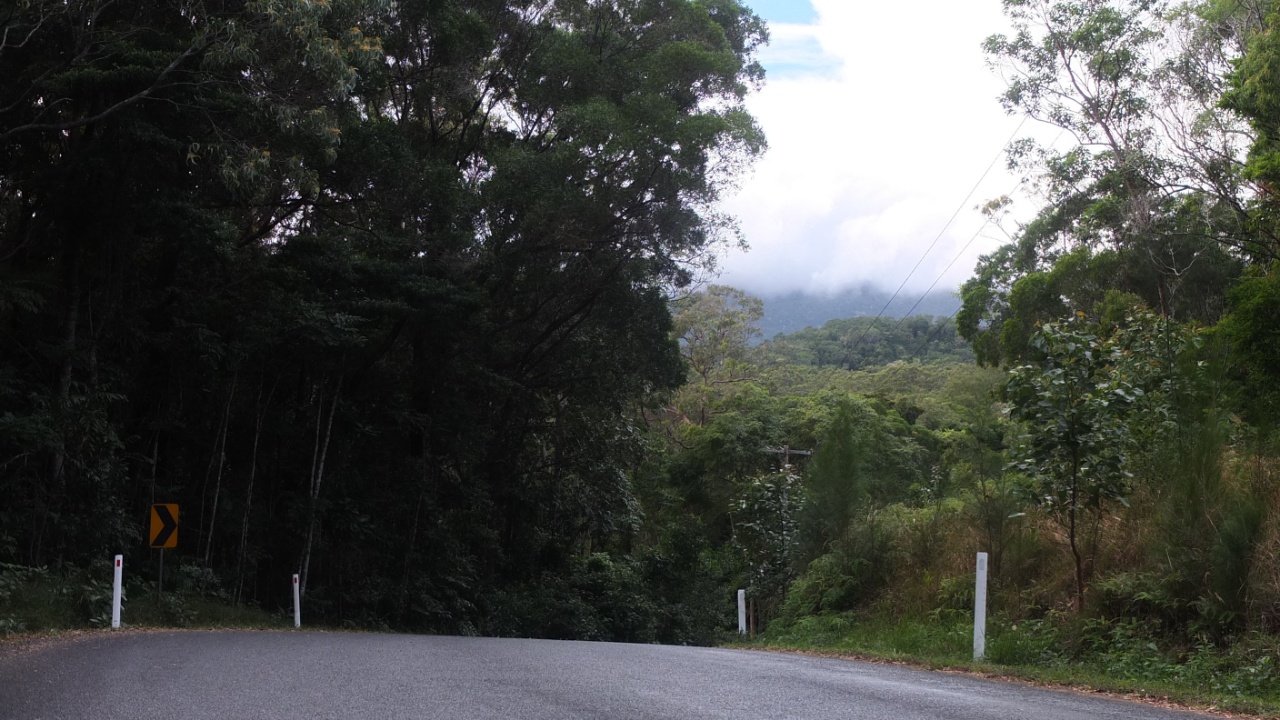 The bad weather is behind me. 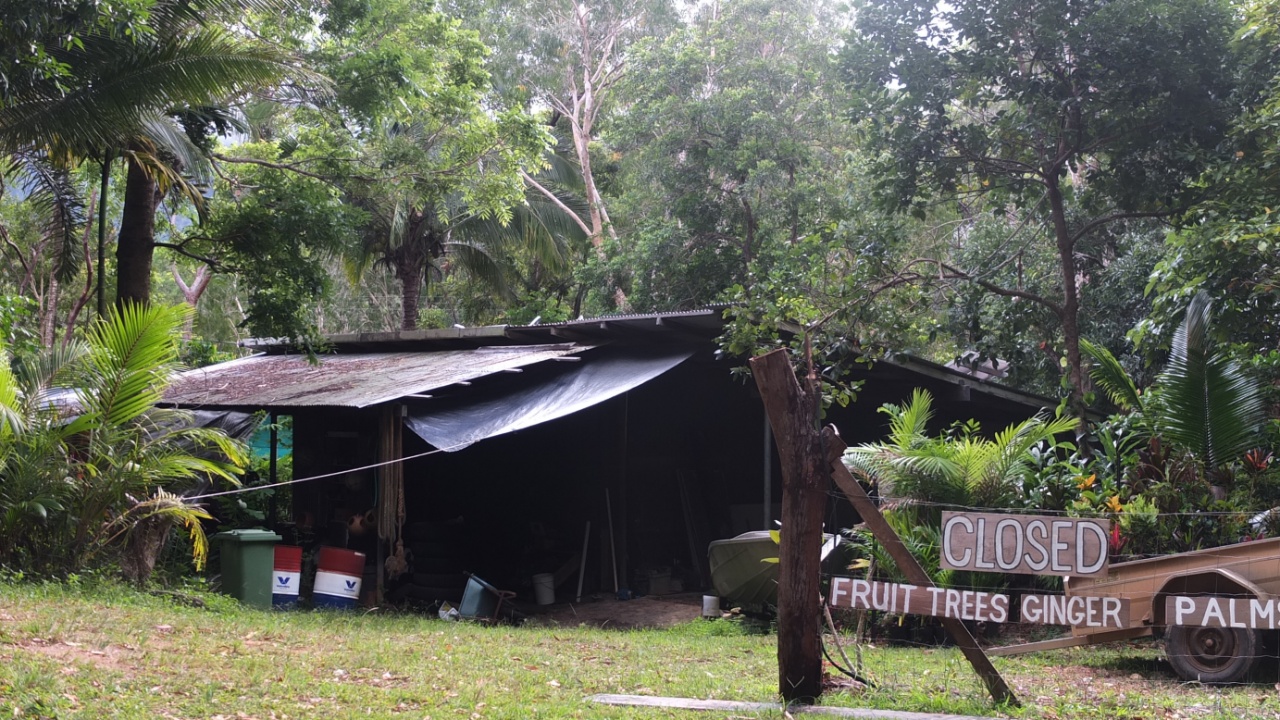 I feel I’m in a jungle with this stylish house. 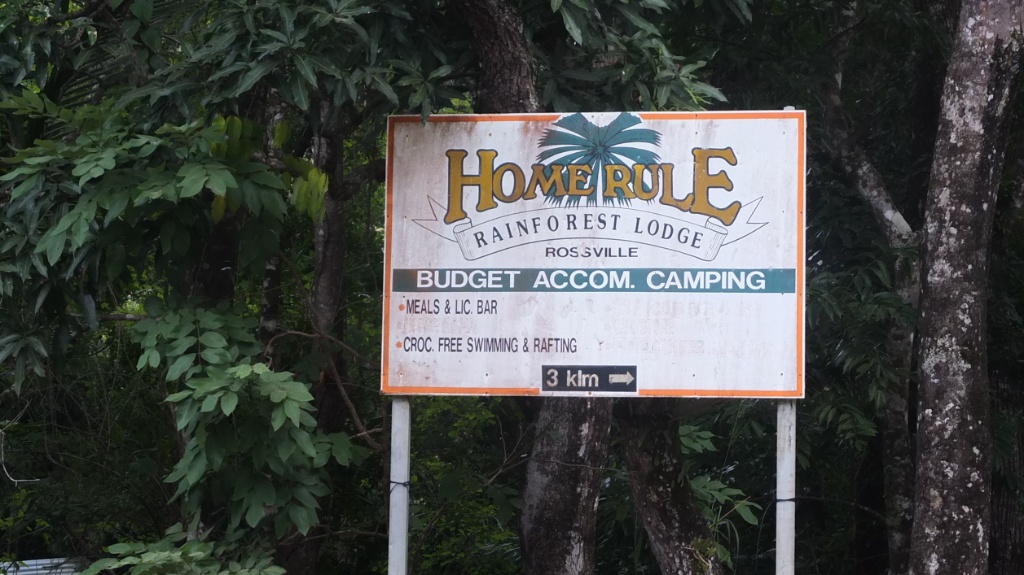 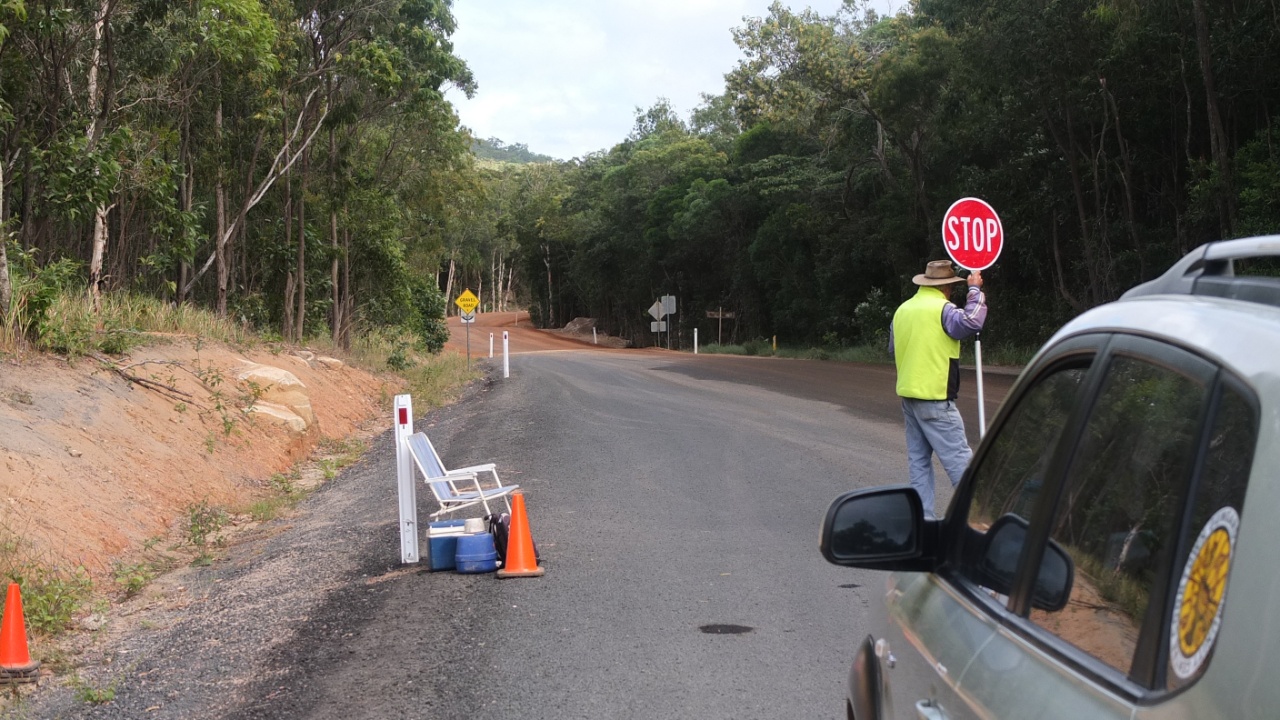 Hobo, some works are on the go. 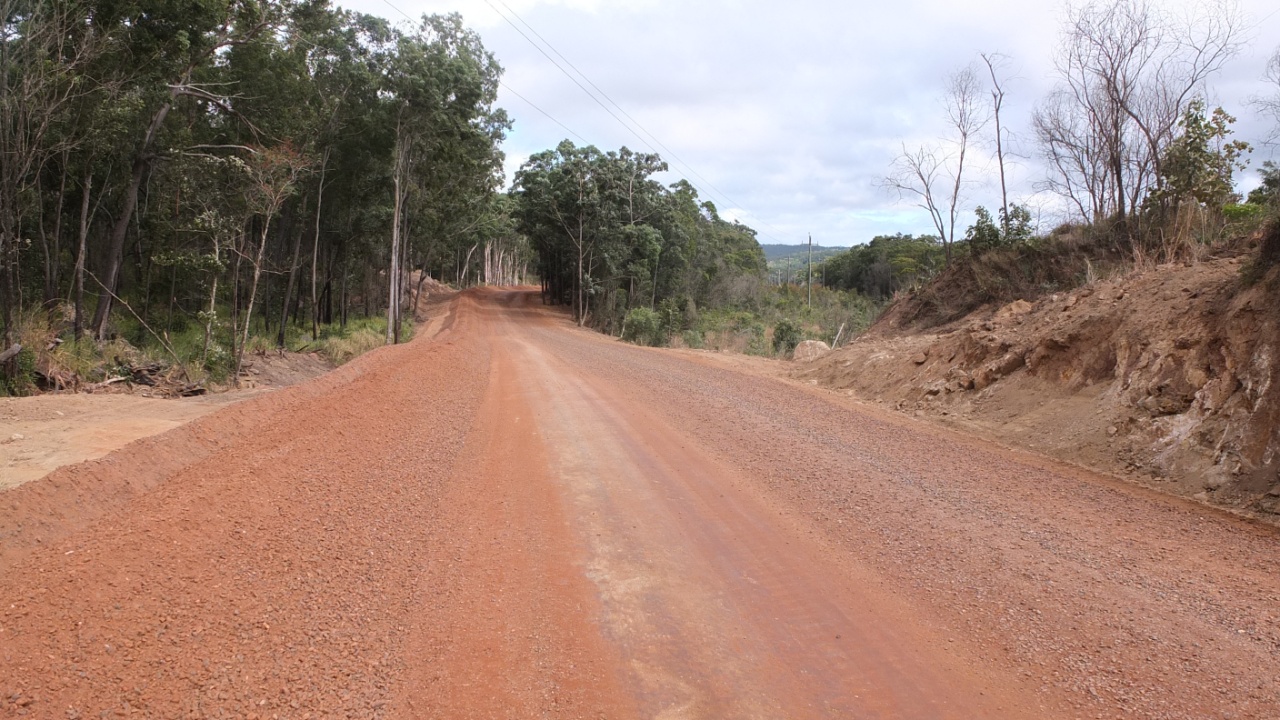 They are doing a good job, I like this road :-D 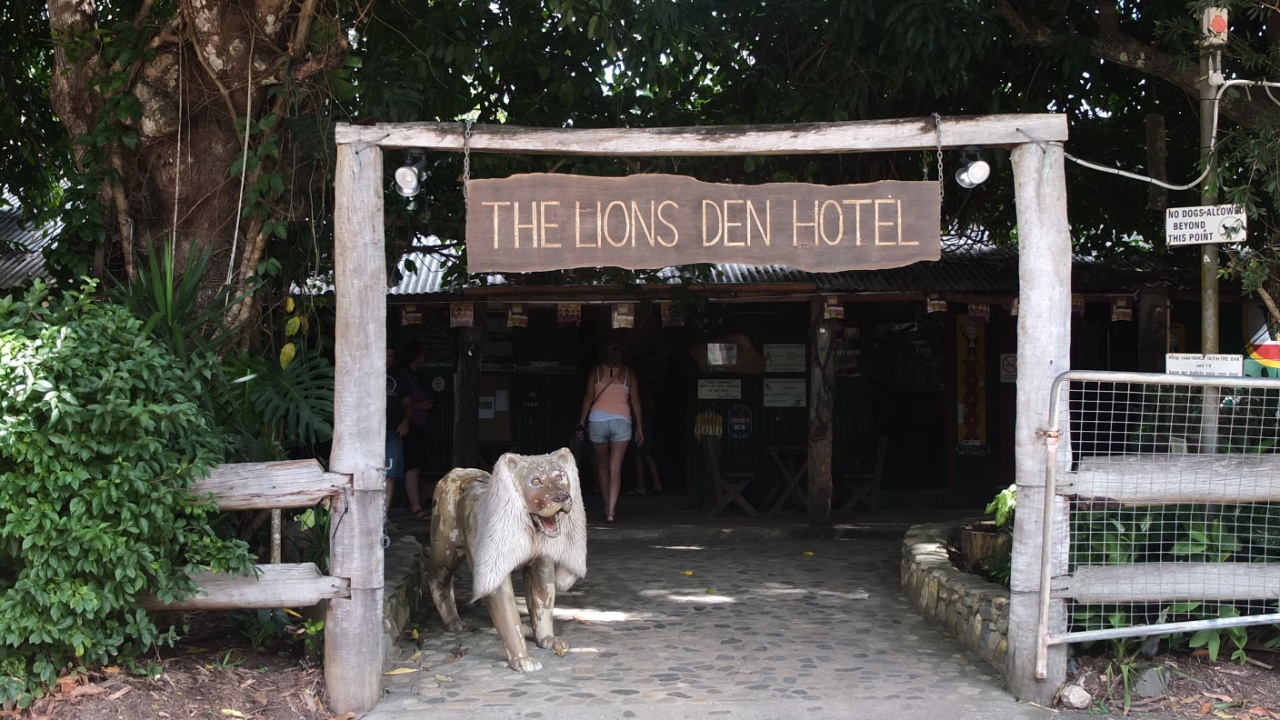 The famous “Lions den hotel”. I’ve seen exactly the same picture on a blog. But there is nothing more to take because it’s certainly an expensive place so I’m having a break outside, thanks. 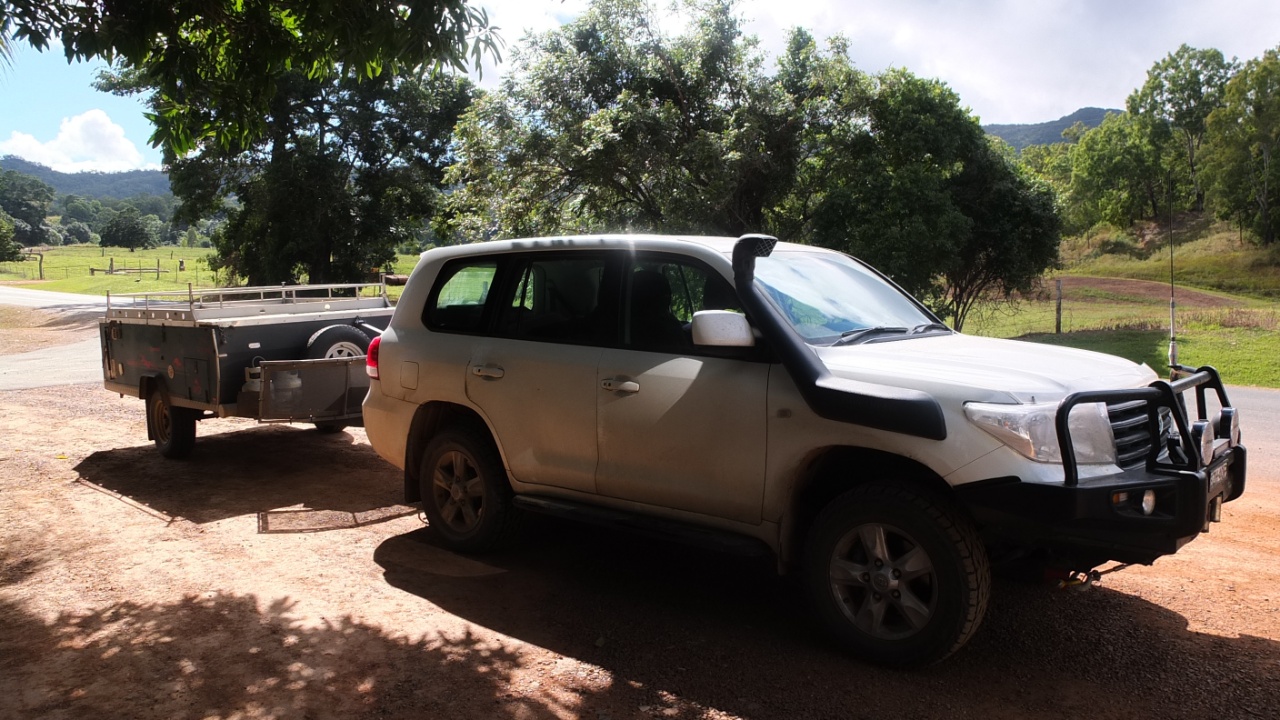 There is always a stylish 4WD around. 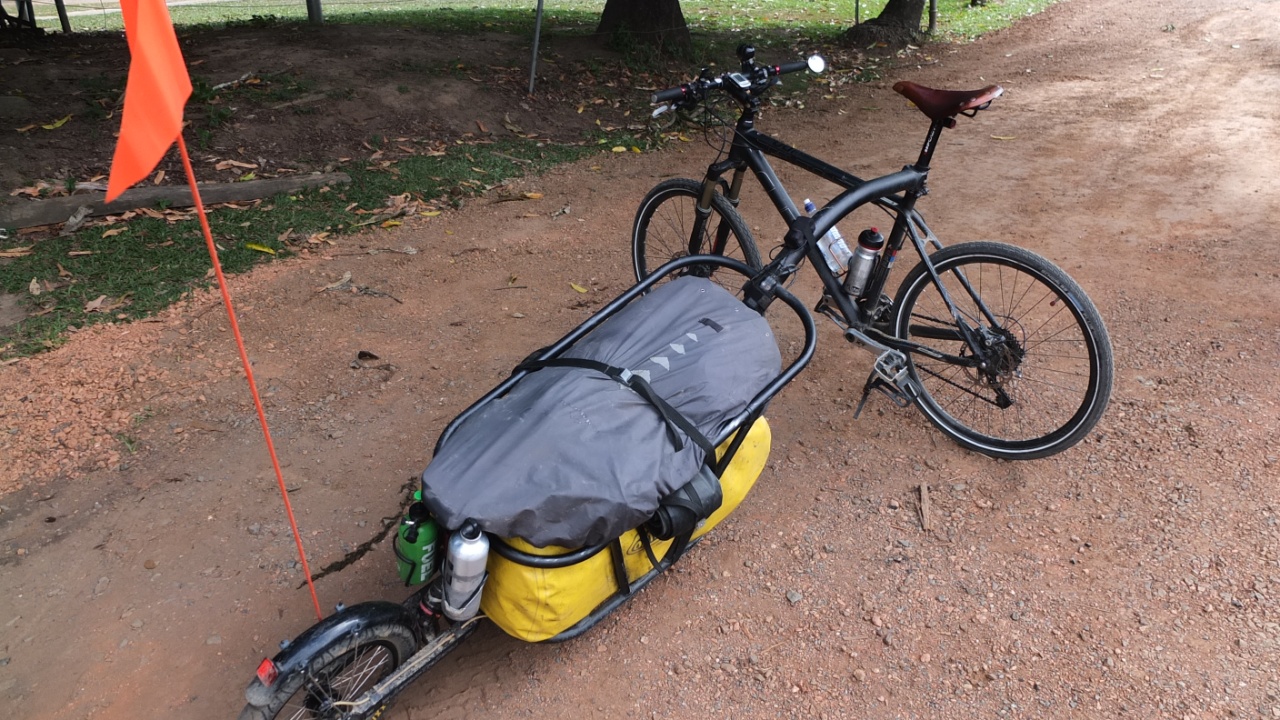 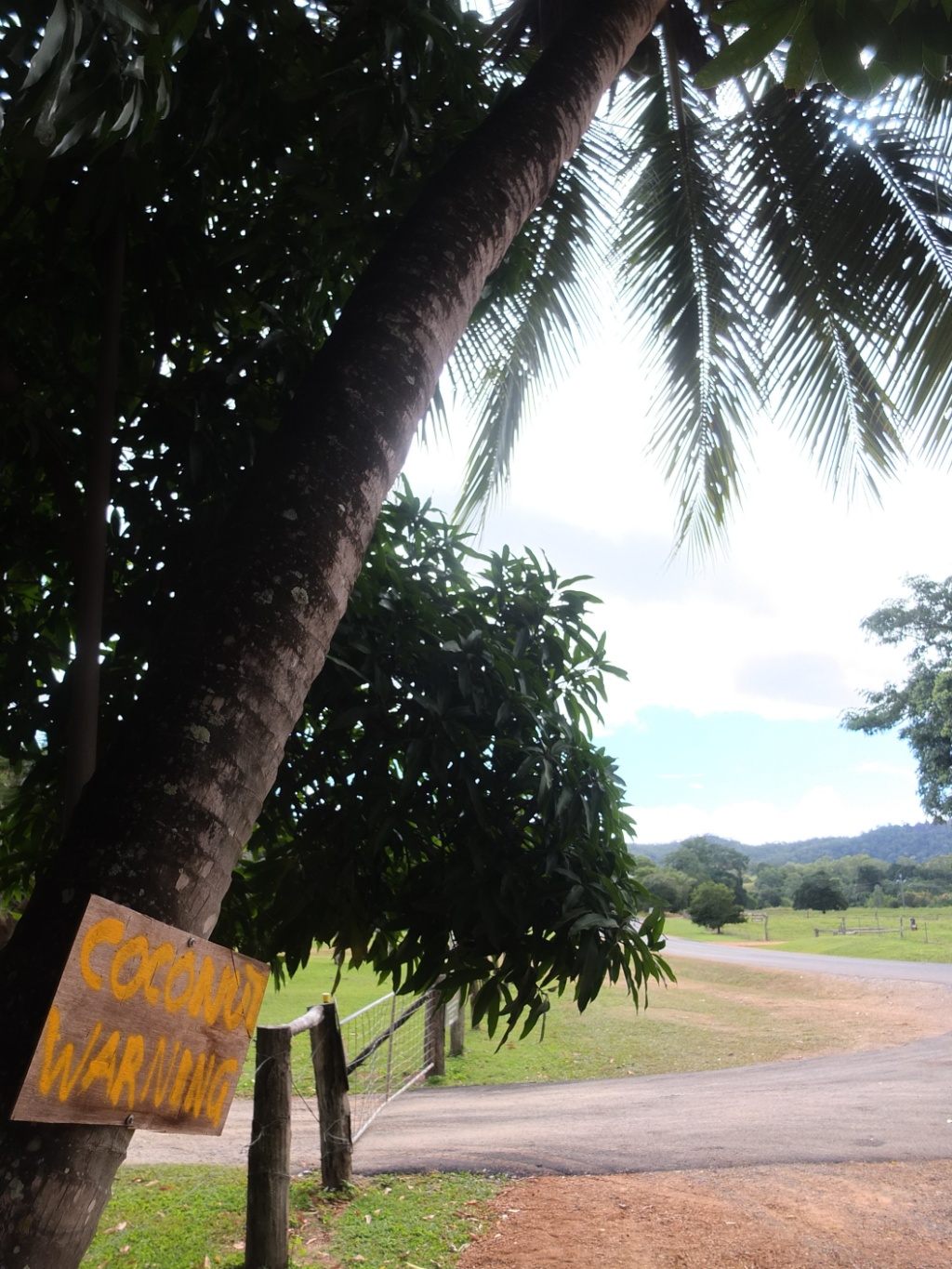 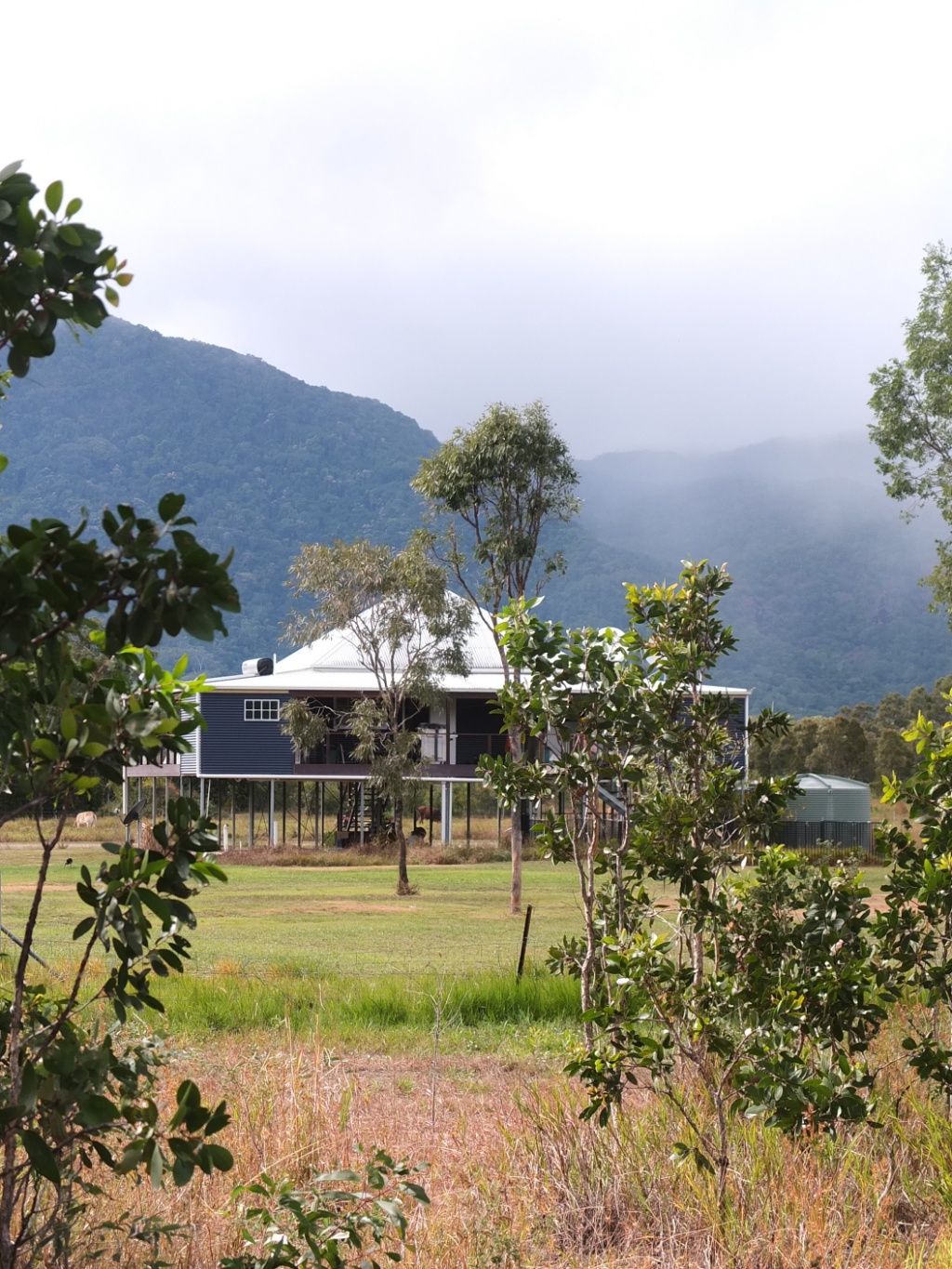 This area is certainly dangerous, it’s totally up to the ground. Crocodiles maybe! haha :-)

Arrived to the Lions Del Hotel. 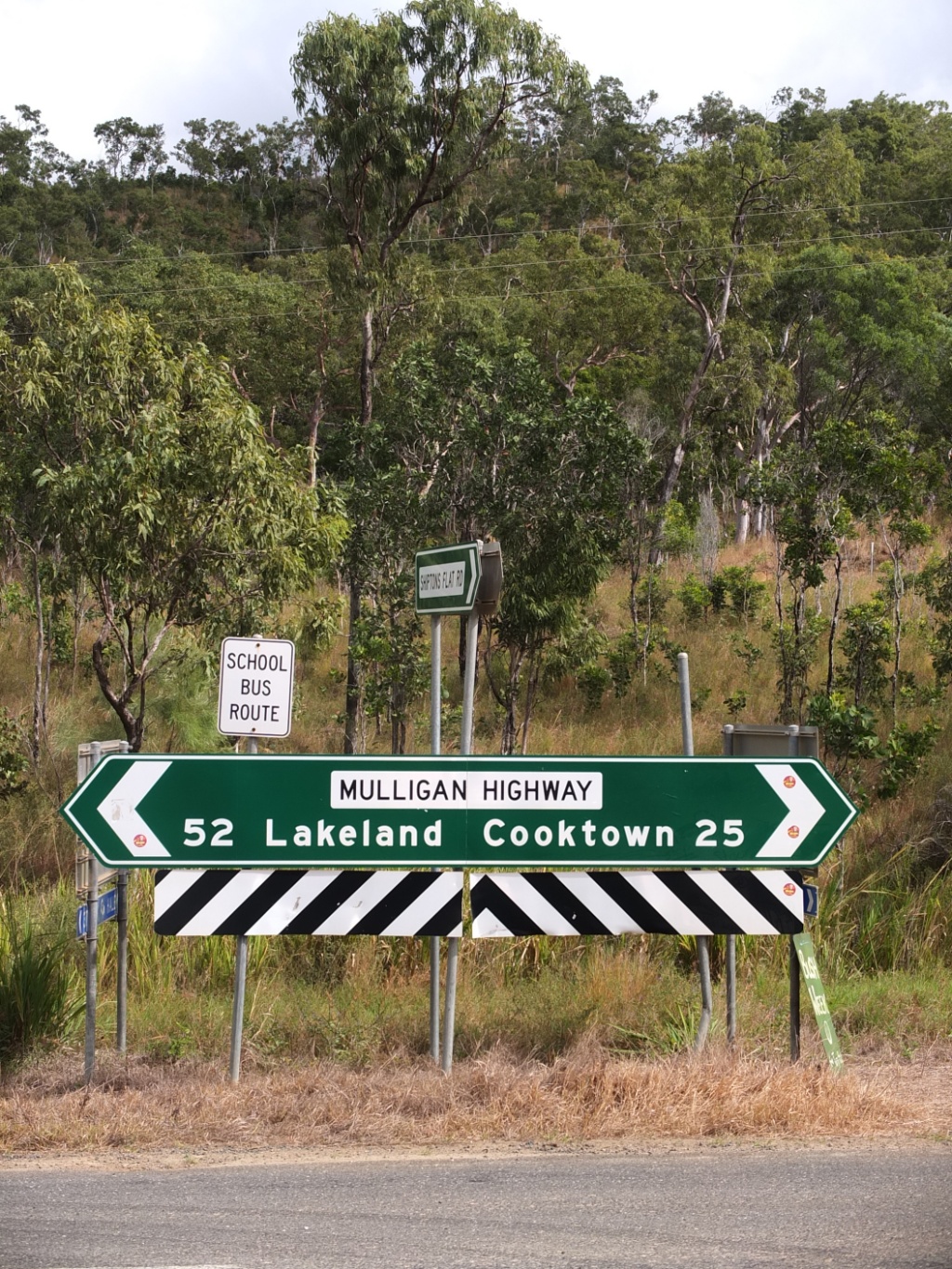 Hey, I finally reach the Mulligan highway! 25km more and I will be in Cooktown. 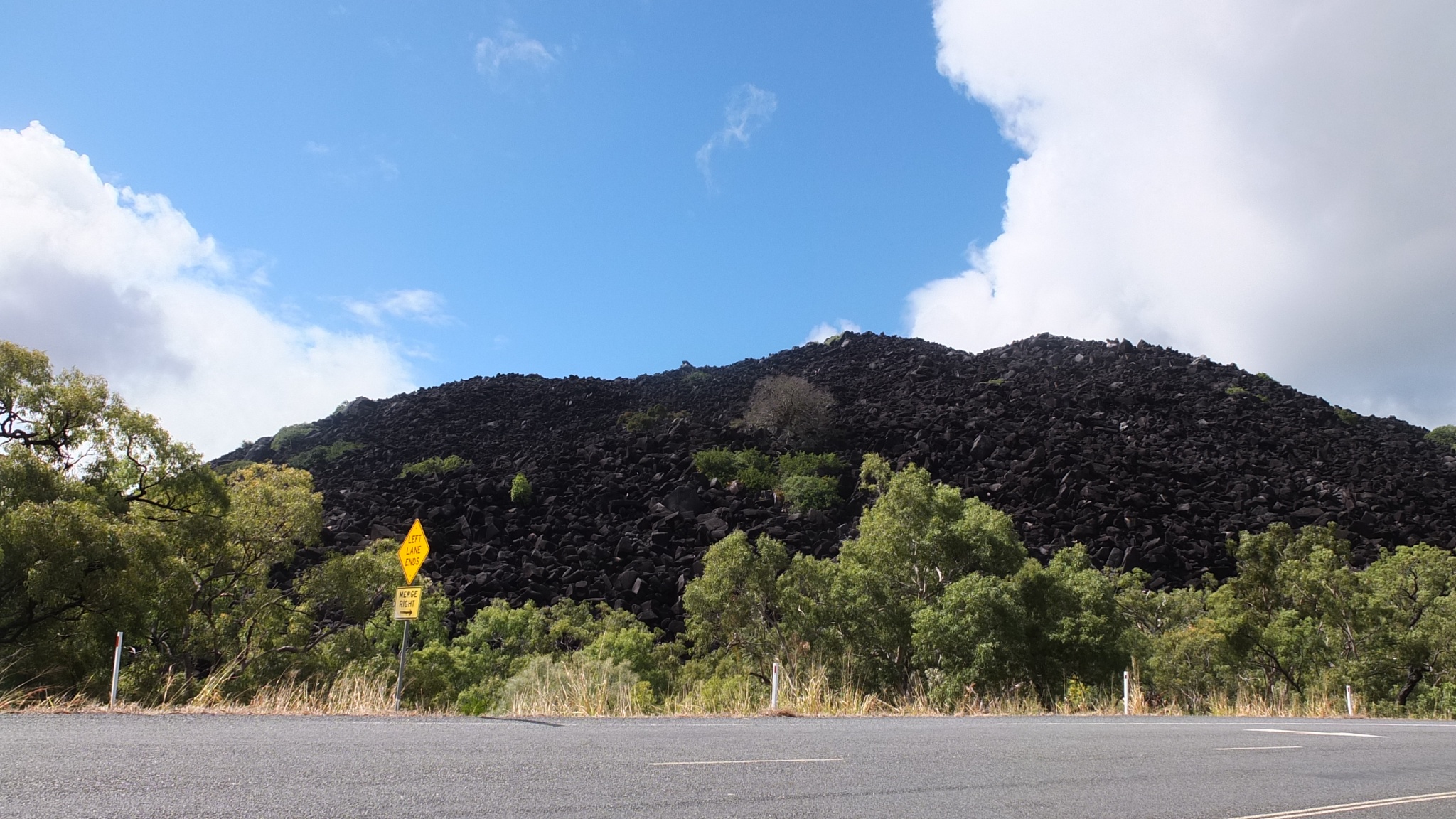 This car looks so small compare to this enormous mountain of rocks. 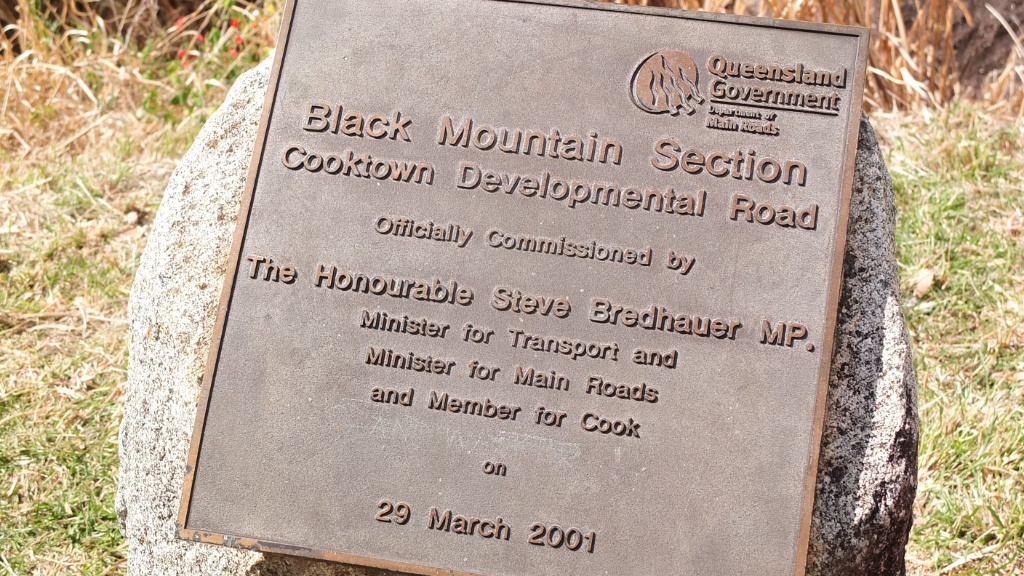 I’ve reached a lookout and there is some explications. Certainly interesting and useful. 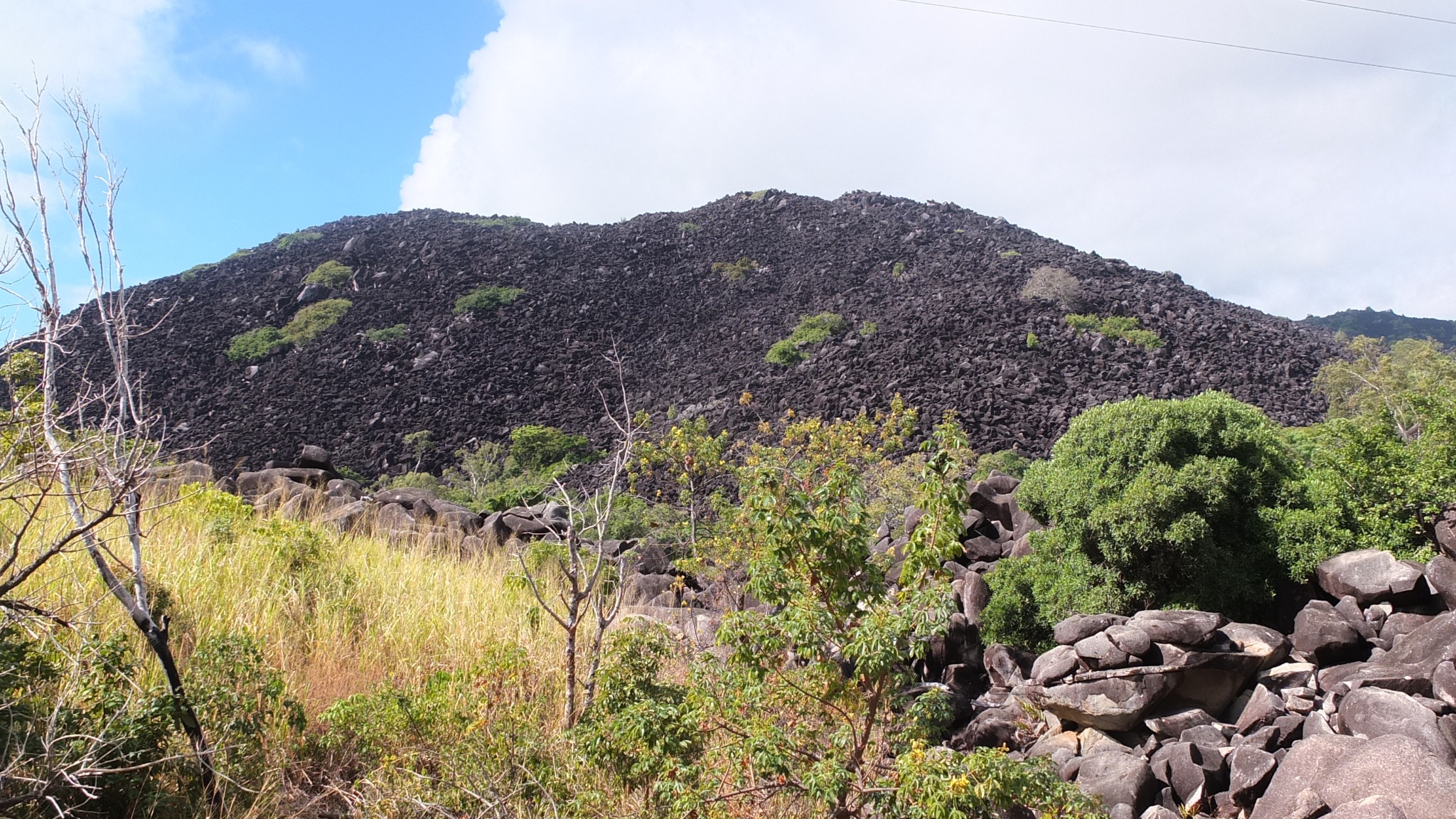 So mountain is called “black mountain” 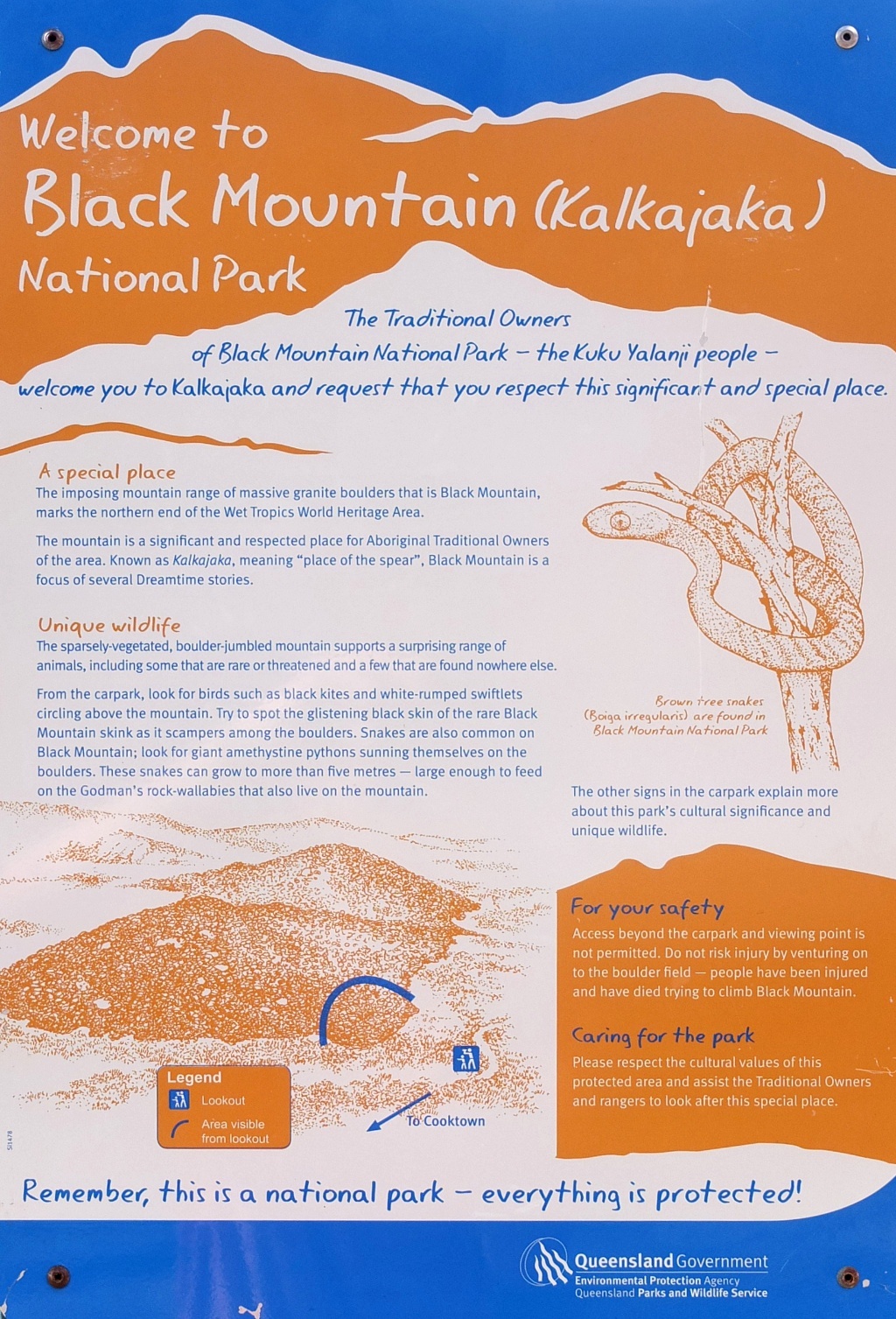 From here, we can see a really small part of it. 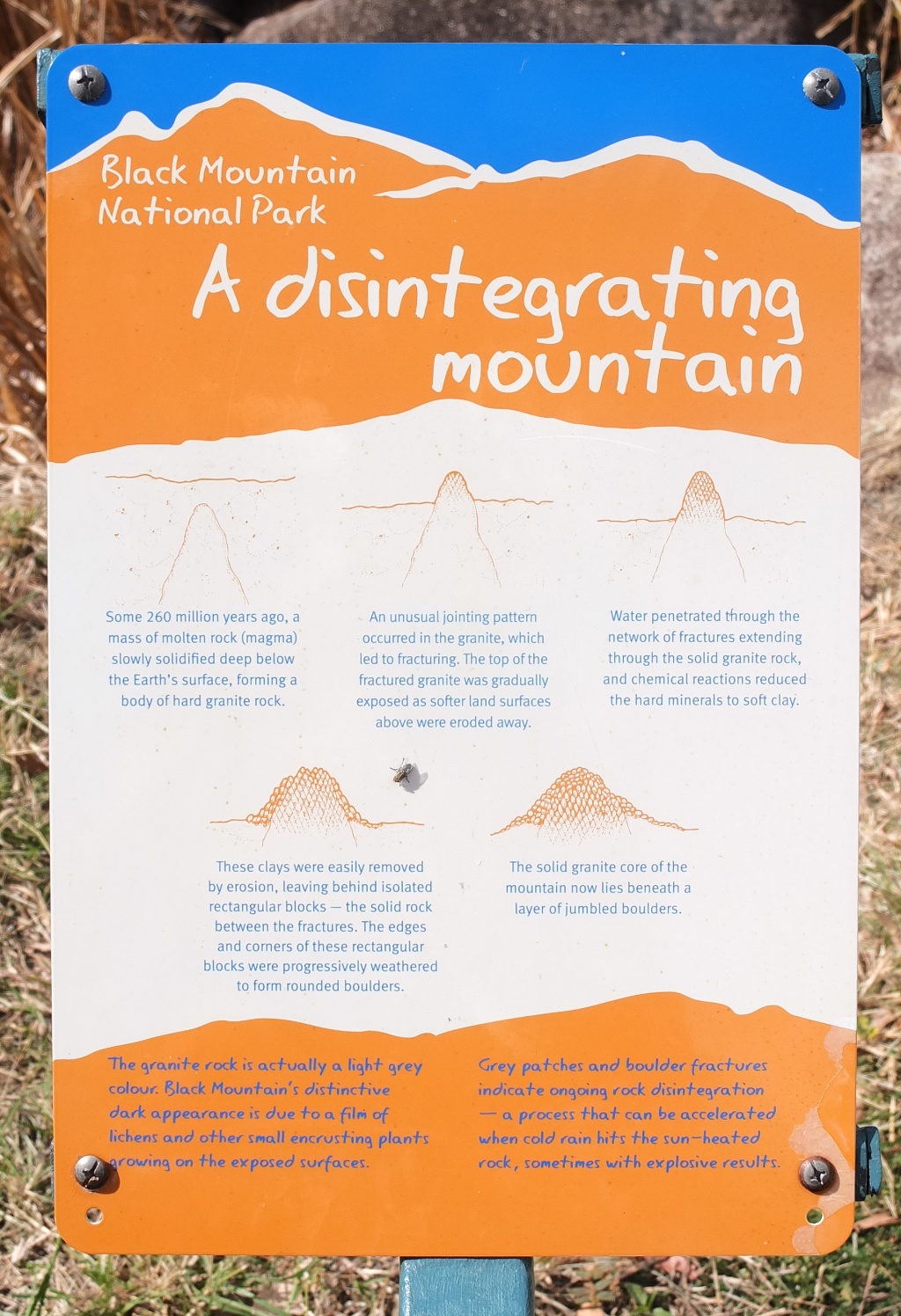 OK. It used to be a block of solidified magma below the earth surface 260 million years ago (only). It’s the work of fracture, water and erosion than let appears now this huge mountain of black rocks. Impressive! 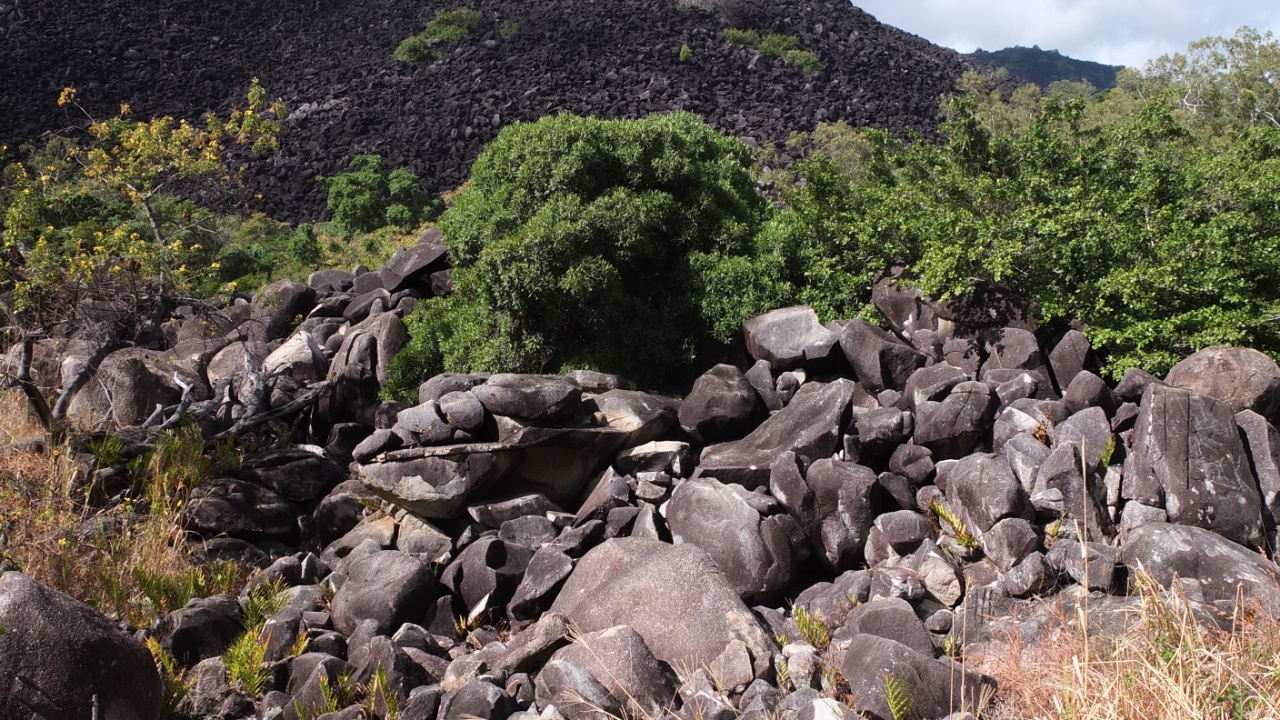 A last closer look. Apparently there is snakes and many other animals living in this area. 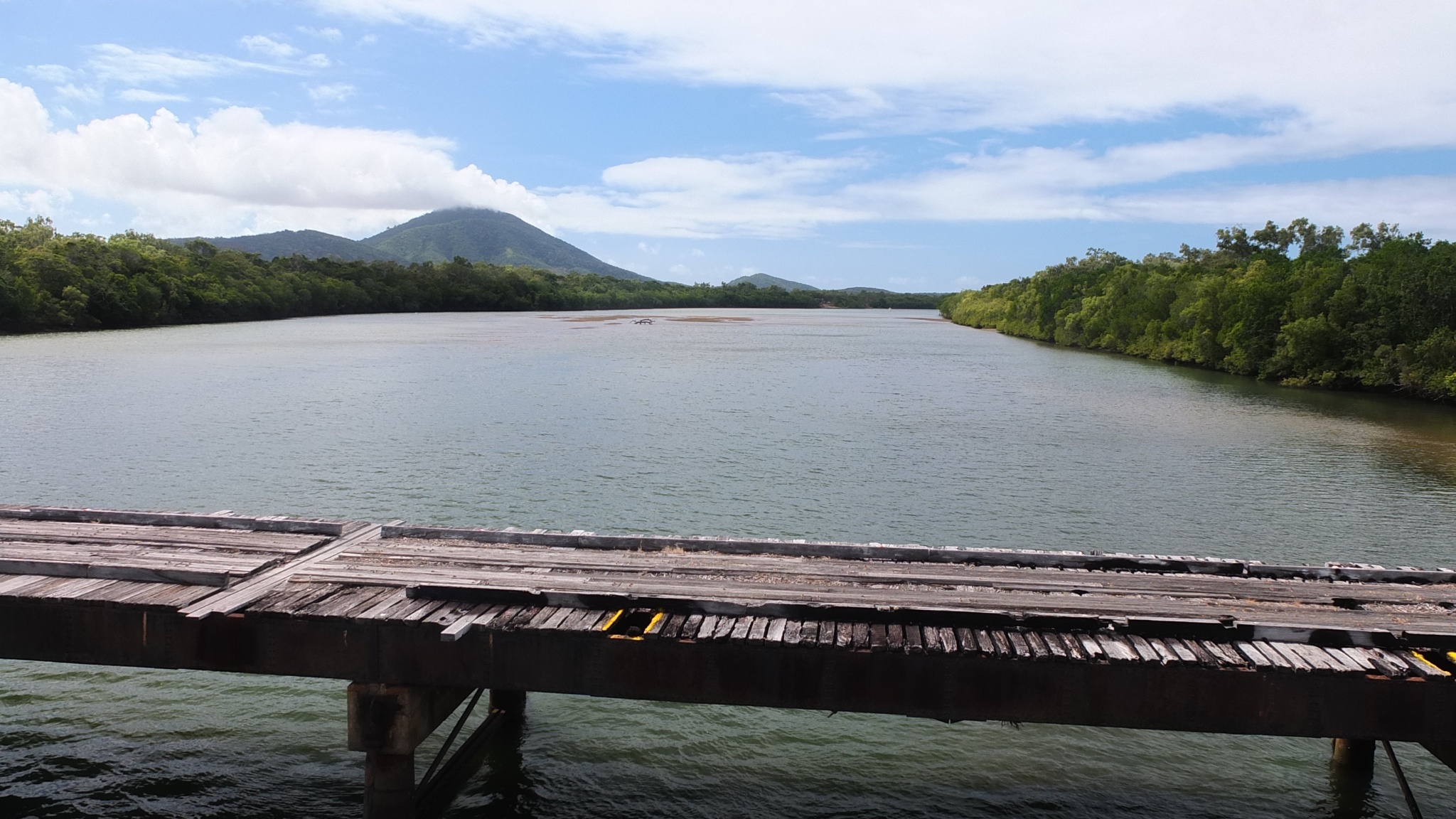 The highest mountain over there is called “mount Cook” but it’s not the same wonderful mountain as NZ. Much less impressive! 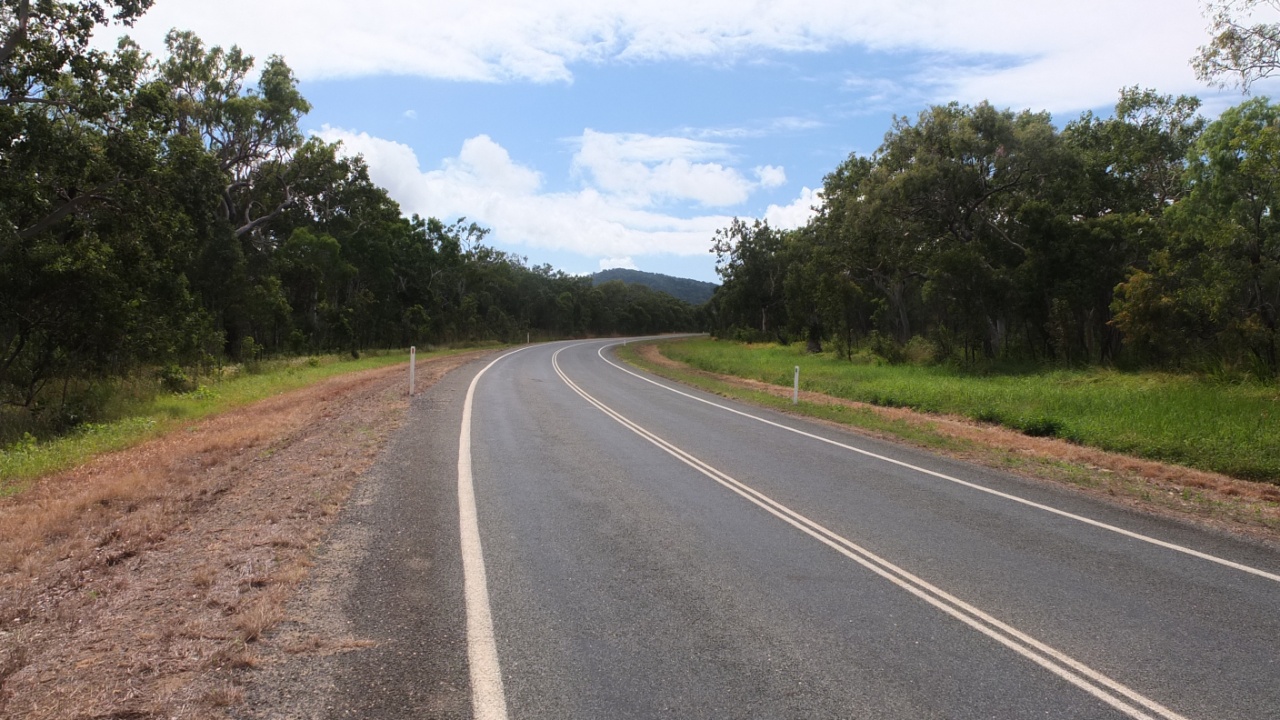 When am I going to arrive? I’m tired… 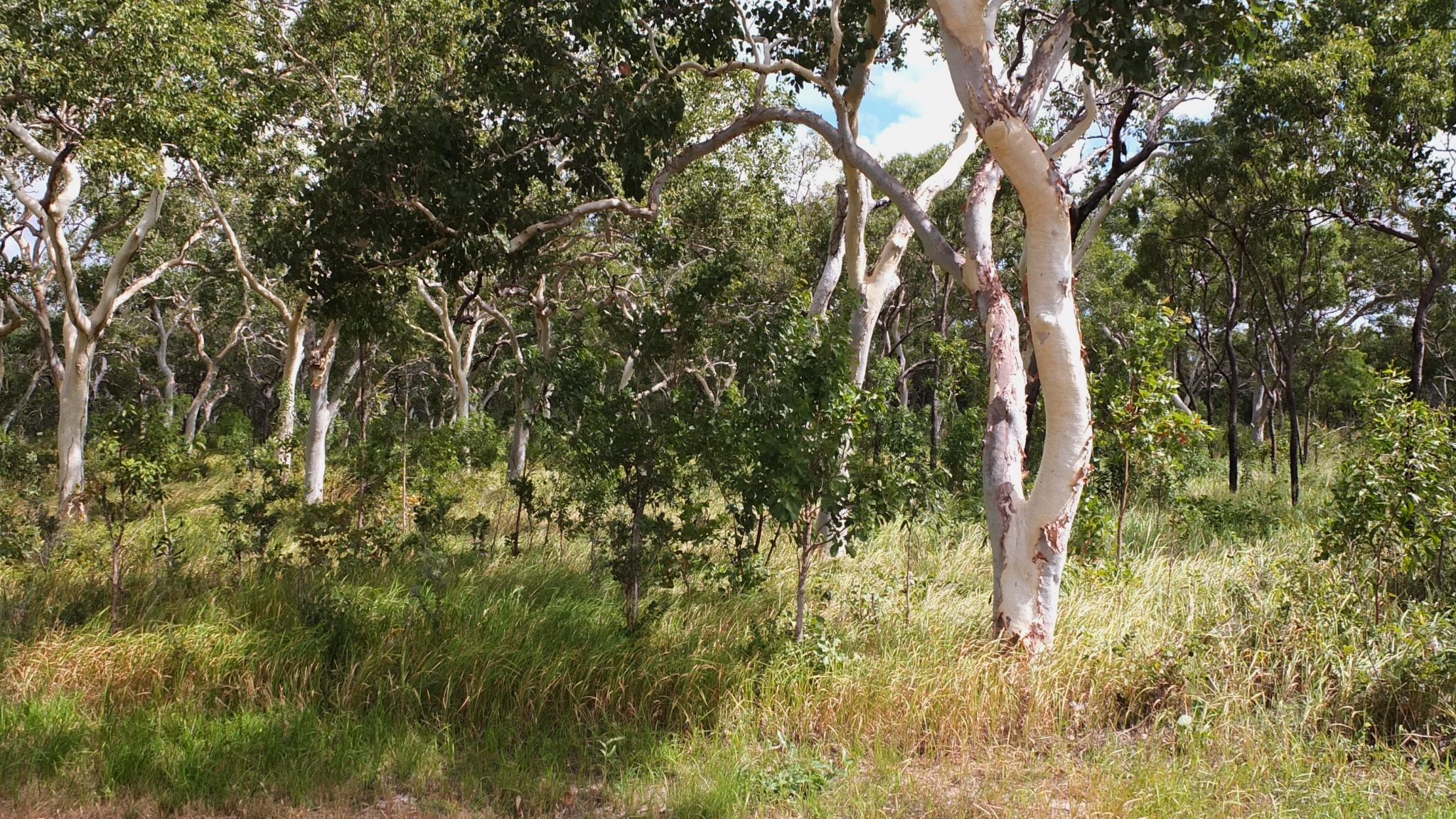 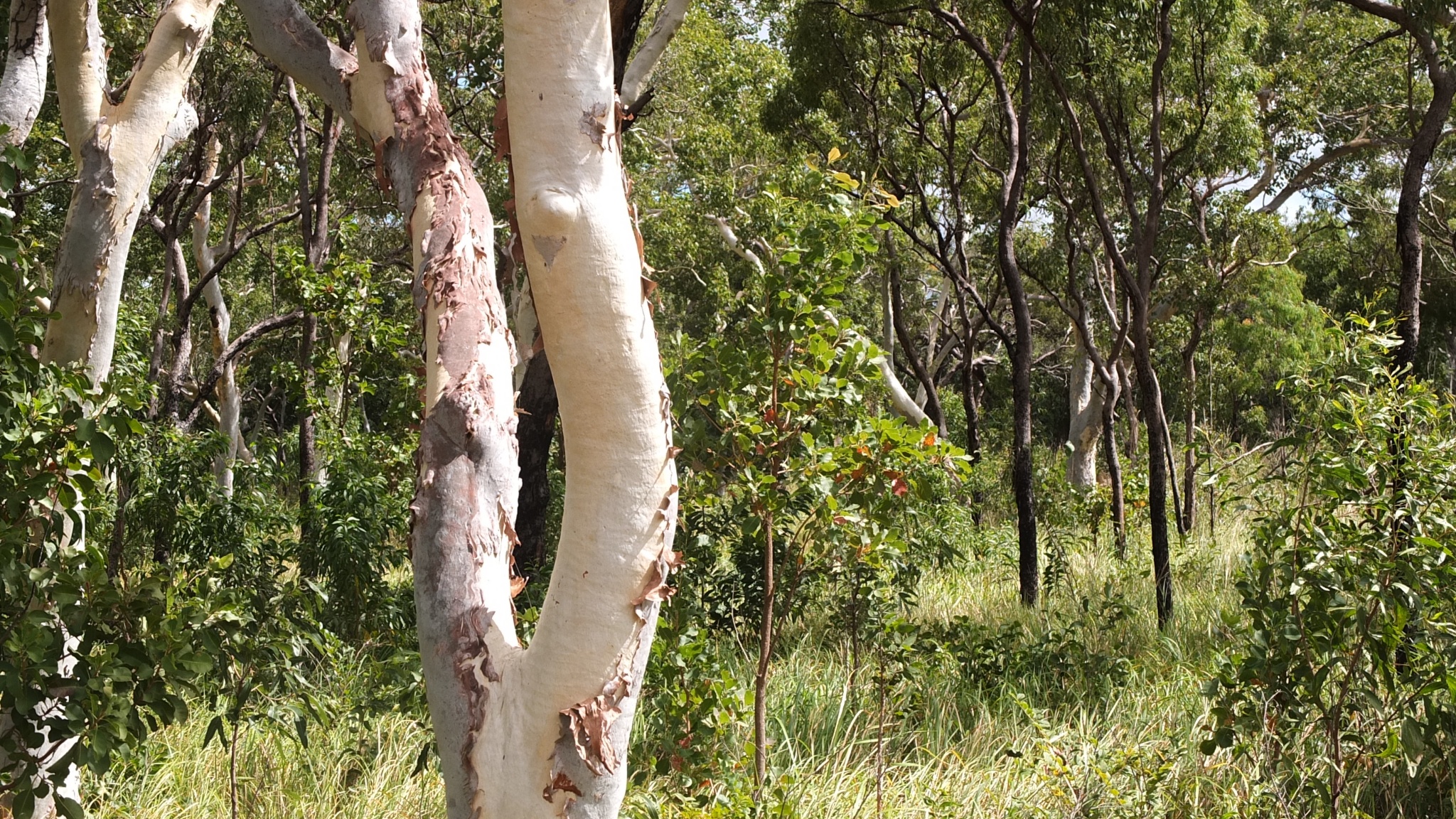 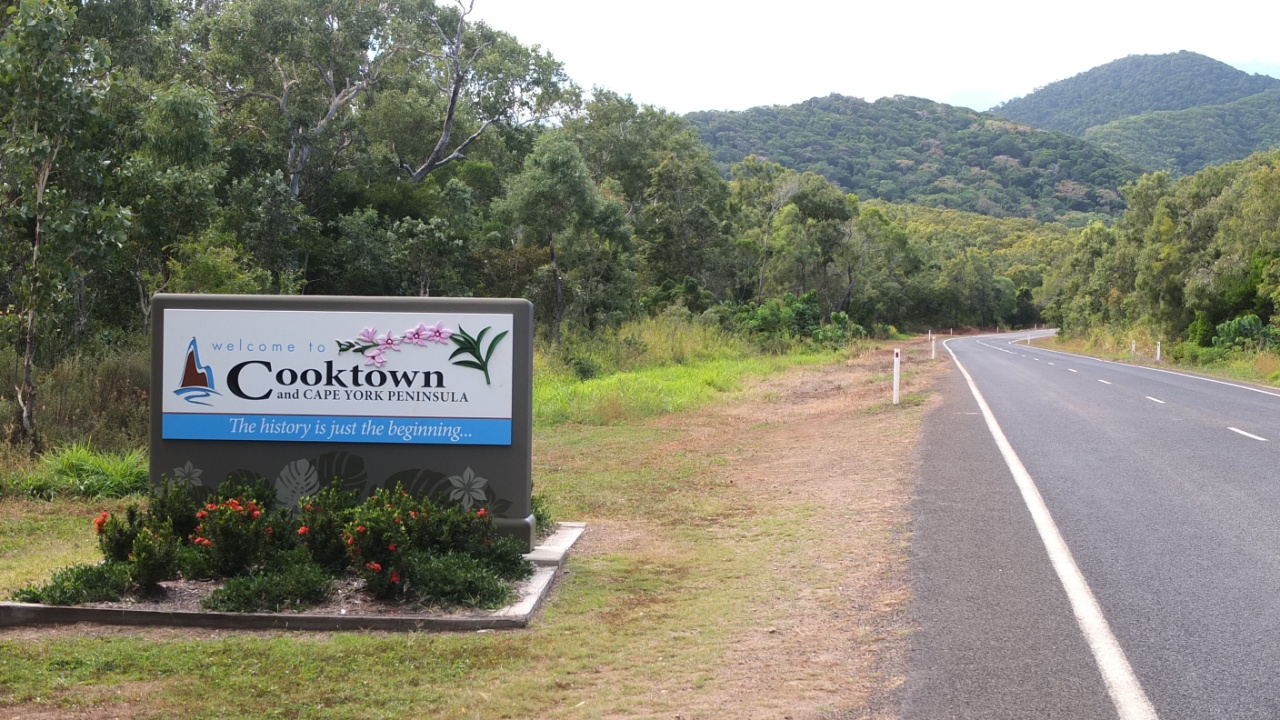 Aaah :-) thank you for the panel but where is the city? 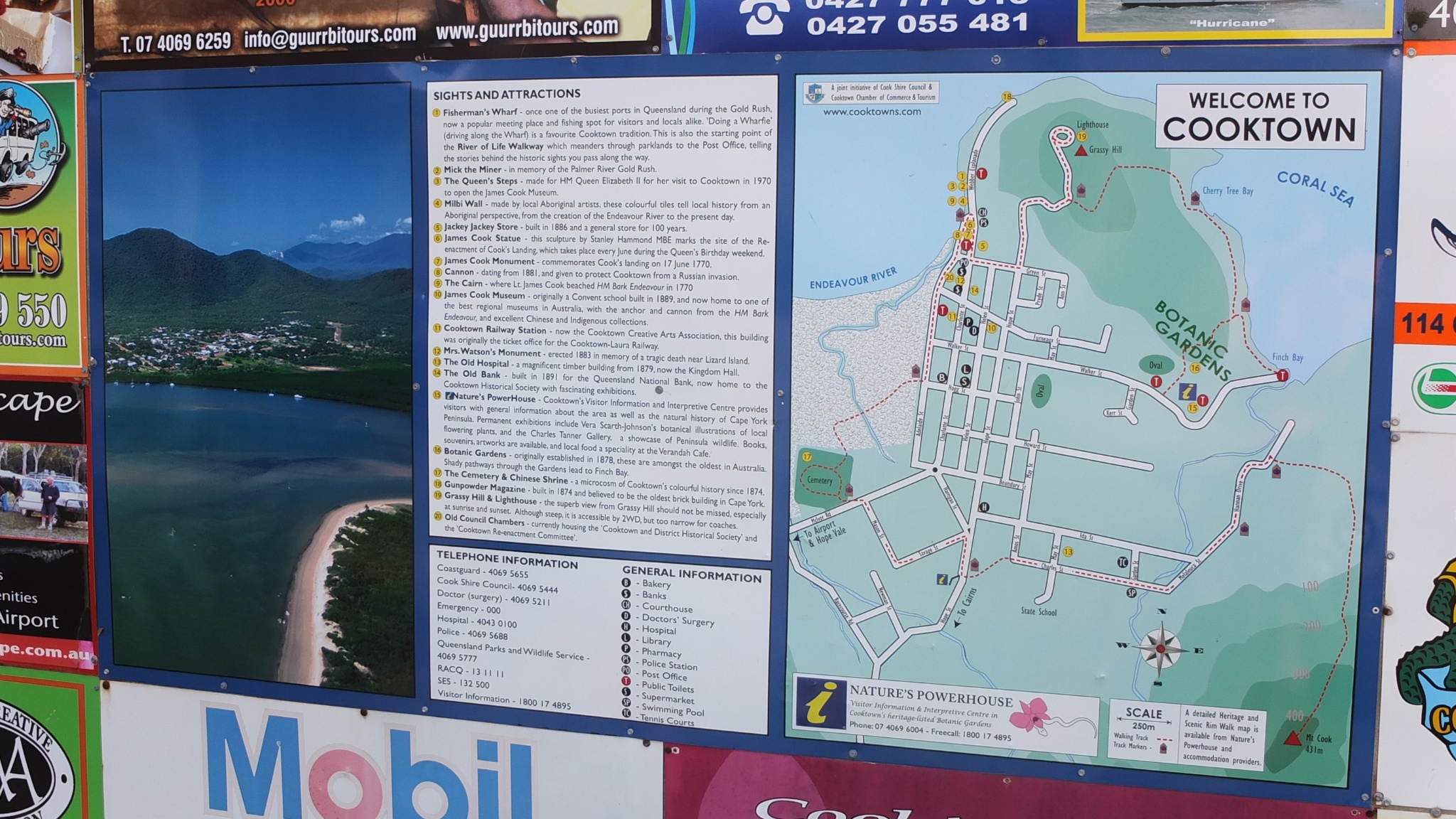 Fouaa! They put a long hill between the panel and the city centre it’s not fair! 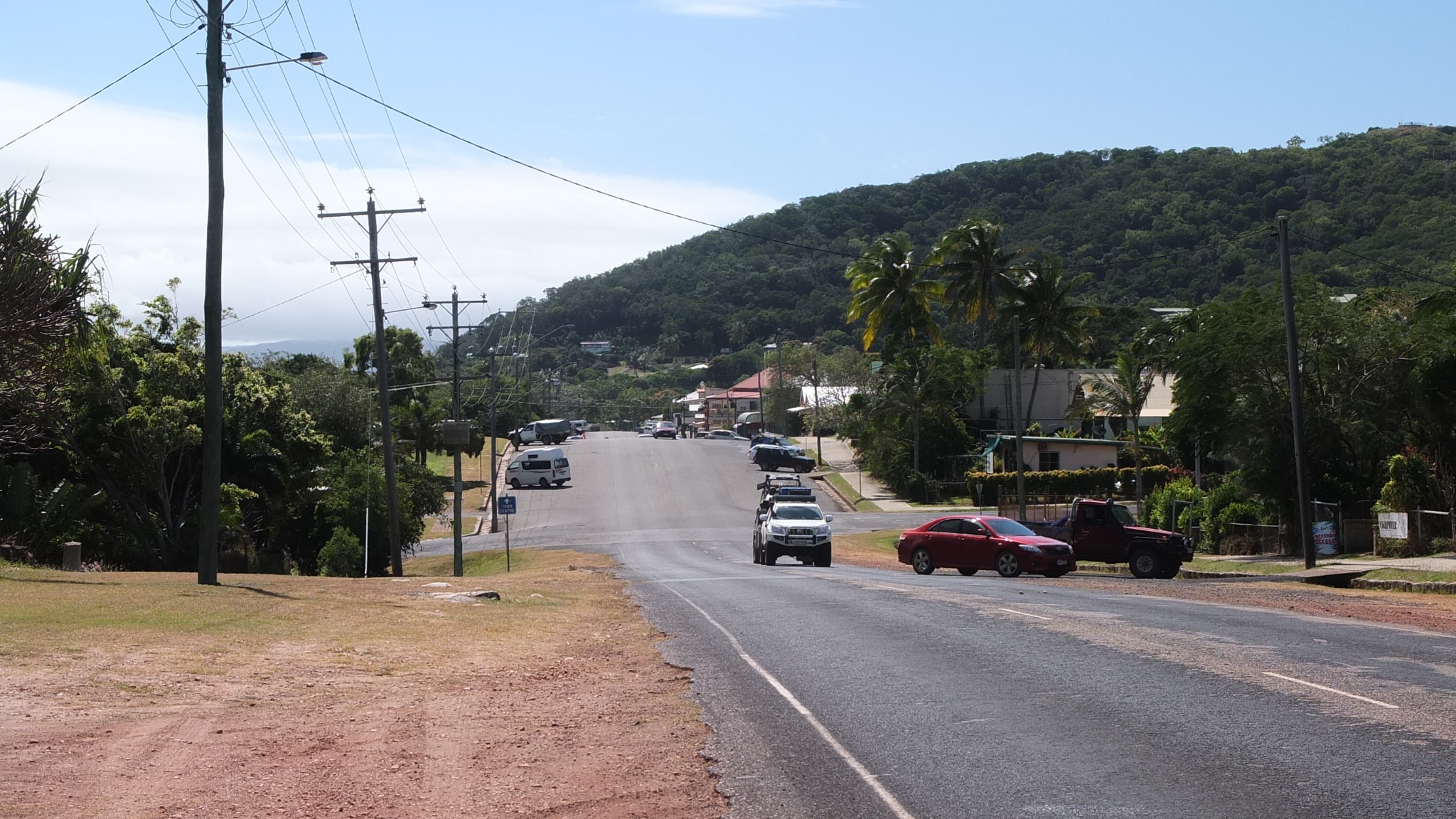 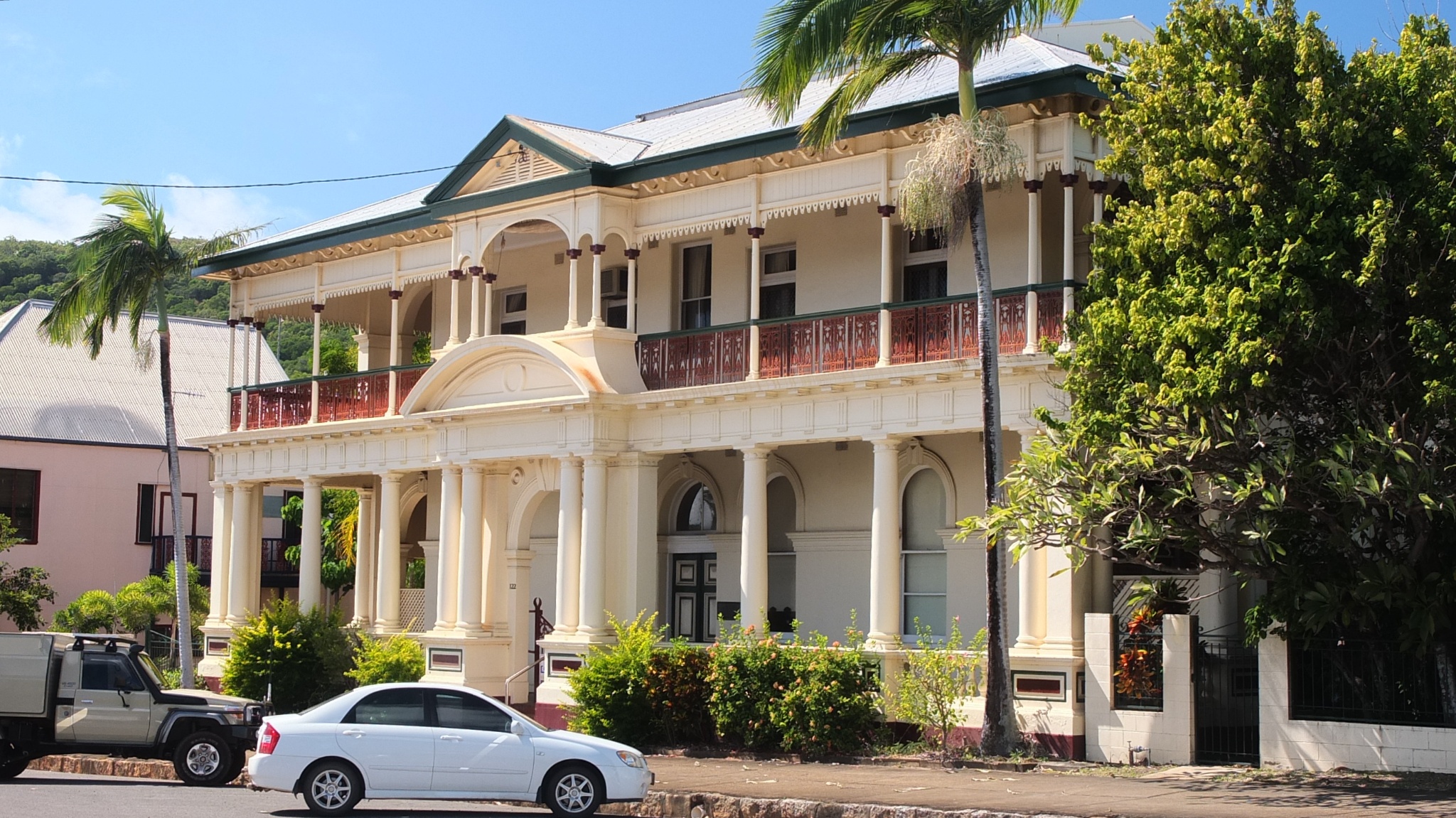 And this is Cook colonial building style. It’s nice.

Then I passed through the principal road and found a BBQ place with table, bench and toilet. It’s always a good place when I’m preparing myselft to clean my bike because I must do it! I was on gravel road for almost two days and my chain needs to be washed if I want to keep it as long as possible and by the way save my money :-) So, let’s clean!
During that time I meet Hane (I’m not sure of this name but I understood, heard it like this) This guy is 65 years old and he is travelling since 15 years! He has a bus which was modified to receive a car. And towed to the bus, he has his boat, a catamaran onto a trailer! Whouaaa! I would like to see that :-D.
He has done severals times the trip between Cairns and Coen, the top of Cape York. Now he his getting tired but he would like to do it one more time.
Hane is now sailing with a friend, Pamela. He met her 3 years ago. She is a traveler as well. She is around 60 years old I think but she said “age is just a number and I don’t mind”. She own an old ambulance that she use as a van, original :-) Because we are chatting about travel, I opened my new shiny (and big) map of Australia and Pam shows me all the roads she rode on. She done already the tour of the country and she has been in the center as well. She is originally hairdresser and travel actually with 15$ on her account haha :-) But she is totally Zen and even more happy to travel like this.
Hane and Pam are really nice people. They are actually waiting in Cooktown bay for a less windy day because they want to reach an island 60 mile away from here. It’s right, the wind is quite strong now.
Hane knows a friend in Cooktown and soon I’m going to met her/him as well :-)
A moment later a lady cone with a young fellow. I will call them Jerry and Tom because I don’t remember their name… I’be finally finished to clean my bike after maybe 1 hour and I’m taking a place around the table. Jerry tells us a part of the history of Cooktown but I don’t understand everything sorry. I just remember that Aboriginal people used to eat white and Chinese people haha :-) nice!
Later, Hane and Tom leave to buy some fish n’ chips and I receive an invitation for stay with them :-) Thank you. During that time I stay with Jerry and Pam listening the lady’s story. Pam talk about her “life” on the boat with Hane. He likes doing everything on his own and certainly sailed many times alone. With Pam on board he still doing the same haha. Pamela used to try to help him sometimes but now she understand and let him doing what he wants. She funny :-)
Maybe 30 minutes later, Hane and Tom come back with our hot dinner! Hmm :-) The whole thing is warp in two big piece of paper : the first one for the chips and the second for the fish, nice! And with that, 2 litres of coca-cola, the best ;-)
We finished that delicious meal and now everybody is going to come back in their home, boat or tent. But it’s night time now and I have no idea where to go. Tom indicates me a place on a park so I will try to hide myself there because I don’t have other options.
It was a really nice afternoon and evening and maybe I will see them tomorrow because I’m going to have a day off.