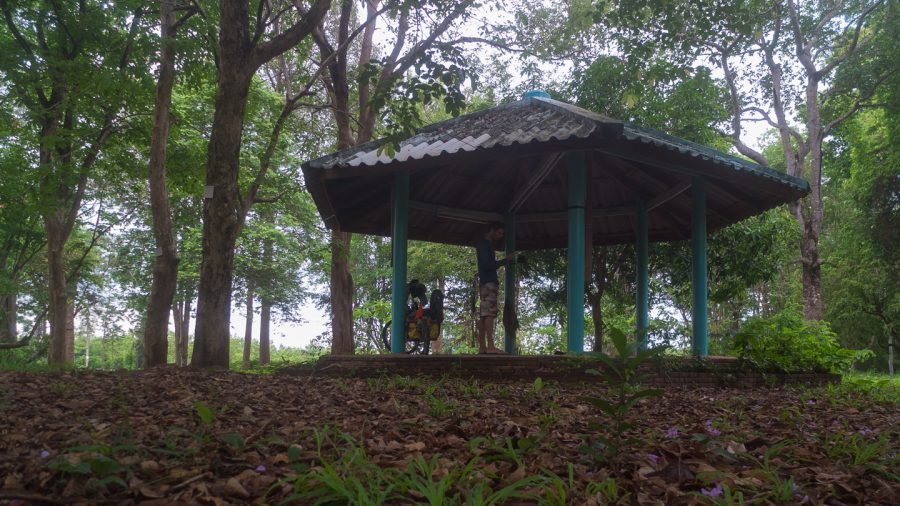 Today I arrived in Kalasin, the second biggest city in Eastern Thailand since I left Laos. Right at on the edge of the town there was another café along the road so I stopped there. Actually I’ve saved most of them on google map so I can easily plan my day. I know it’s not really adventurous but that’s not the goal these days. Mainly, I cycle between 30 to 60 kilometres per day, early morning and late afternoon and spend the rest of the day at my “office” :-) Because of this, you can still read what I’m doing AND I can update technically my website too :-) Anyway, when I arrived in Kalasin, I sent 2kg of stuff back to France. I feel much lighter now! No, not really… In fact, I don’t even feel any difference haha. 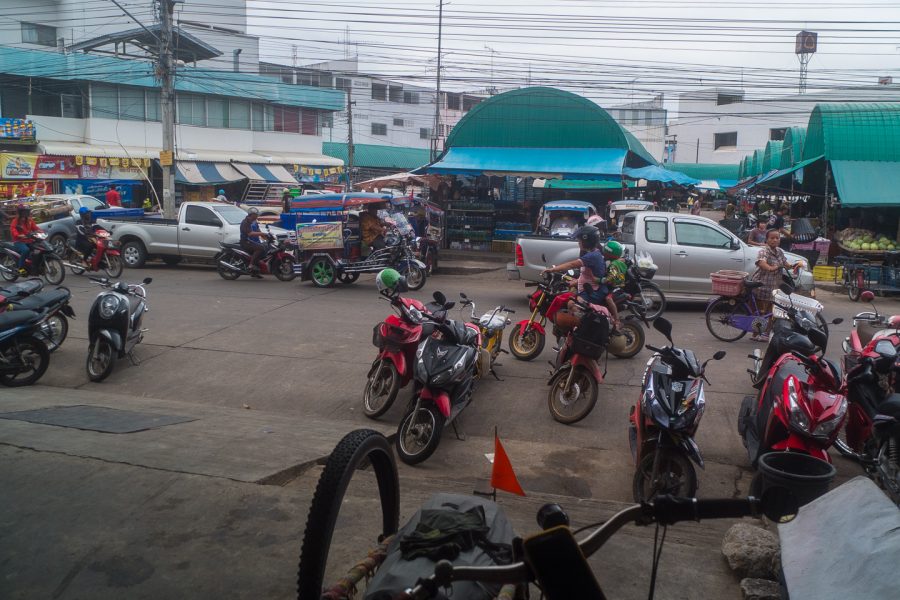 That’s Kalasin market. I did not take any pictures this morning. The road was straight and the sky covered, not the best situation to take pictures. 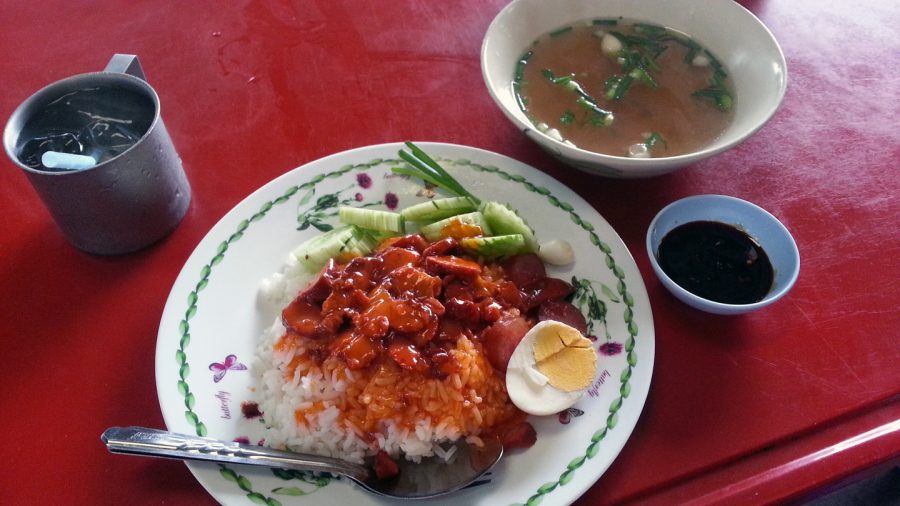 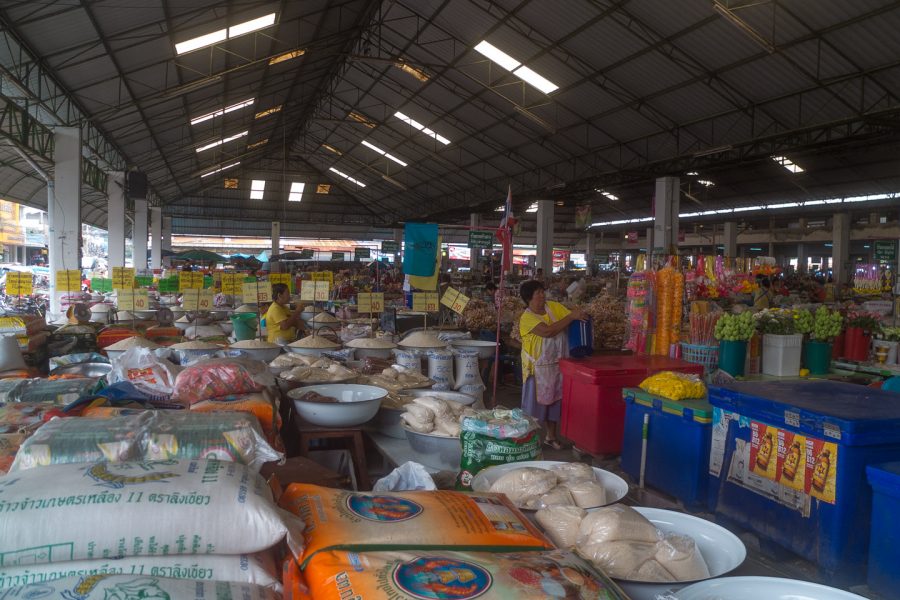 The market is huge but I don’t need anything, especially those heavy rice bags at the front haha. 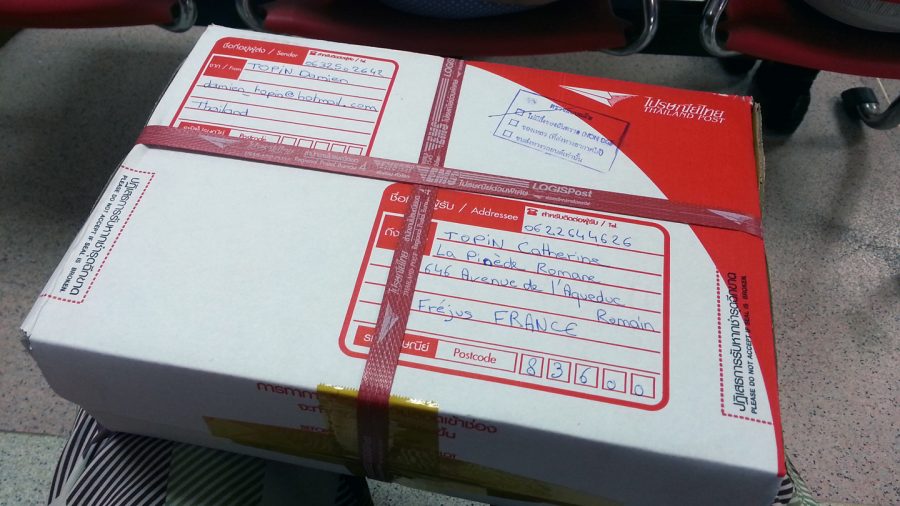 Luckily, there was an opened post office nearby from where I ate. I thought it would be easier to send a package from here more than from Bangkok. The service is very well organised here. In 20 minutes, I was done. Most of it was souvenirs given by people I met on the way since Indonesia. I can tell now, the post in Thailand is a lot cheaper than Laos. For example, when I was in Vientiane (Laos) I went to the post office to send 1.6kg to France by air (they didn’t offer ship). The price was 50€ ($75AUD). Today, I’ve sent 2kg (I’ve found some more stuff to send between :-) to the same address, by ship this time. The price was less than half (24€ > $38AUD). The ship/air way must make the difference. I’m glad I’ve waited to be in Thailand again. 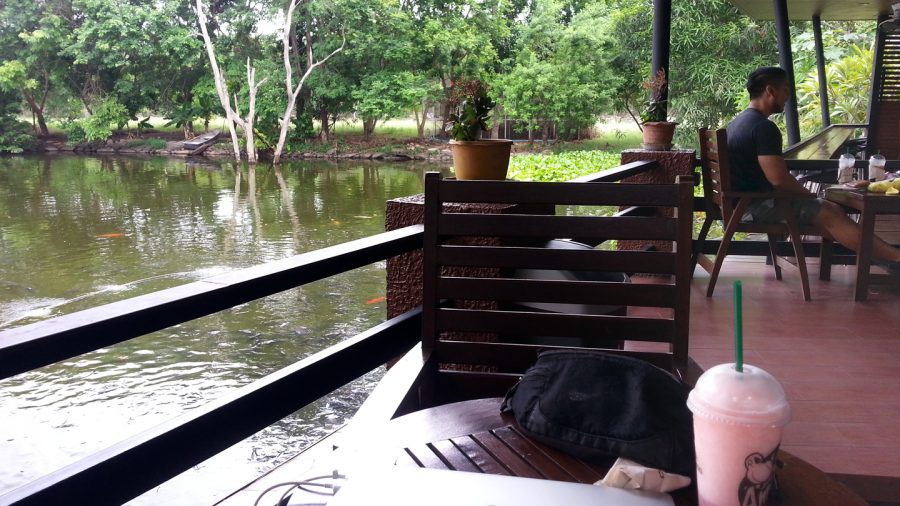 Shortly after the post office, I’ve reached the next PTT petrol station and once again, I’m in an Amazon café with SUPER fast Wi-Fi. If you come to Thailand, I recommend you to get AIS. They offered free Wi-Fi in many places and it’s very reliable compared to what I’ve tested in many other countries. An example? I’ve download a major update for my laptop (more than 6Go) in approximately 40 minutes! Good right? 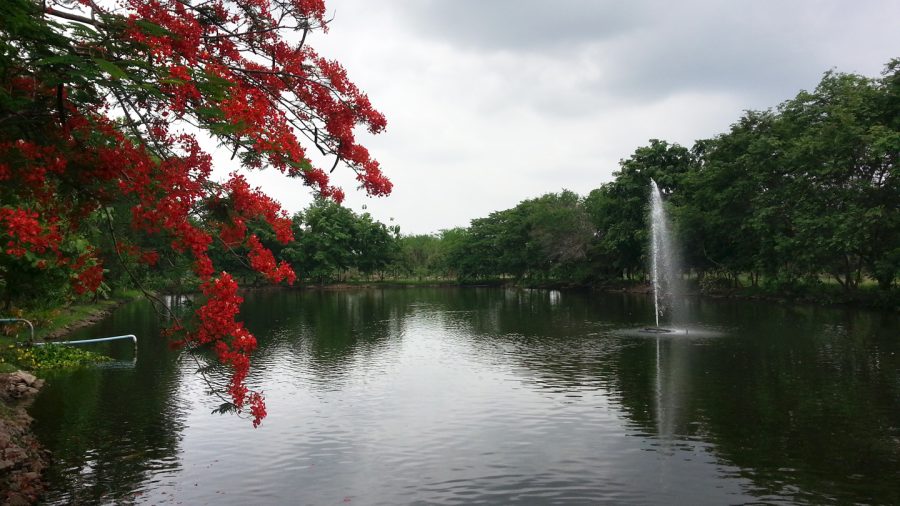 The view is not bad either from where I sit :-) 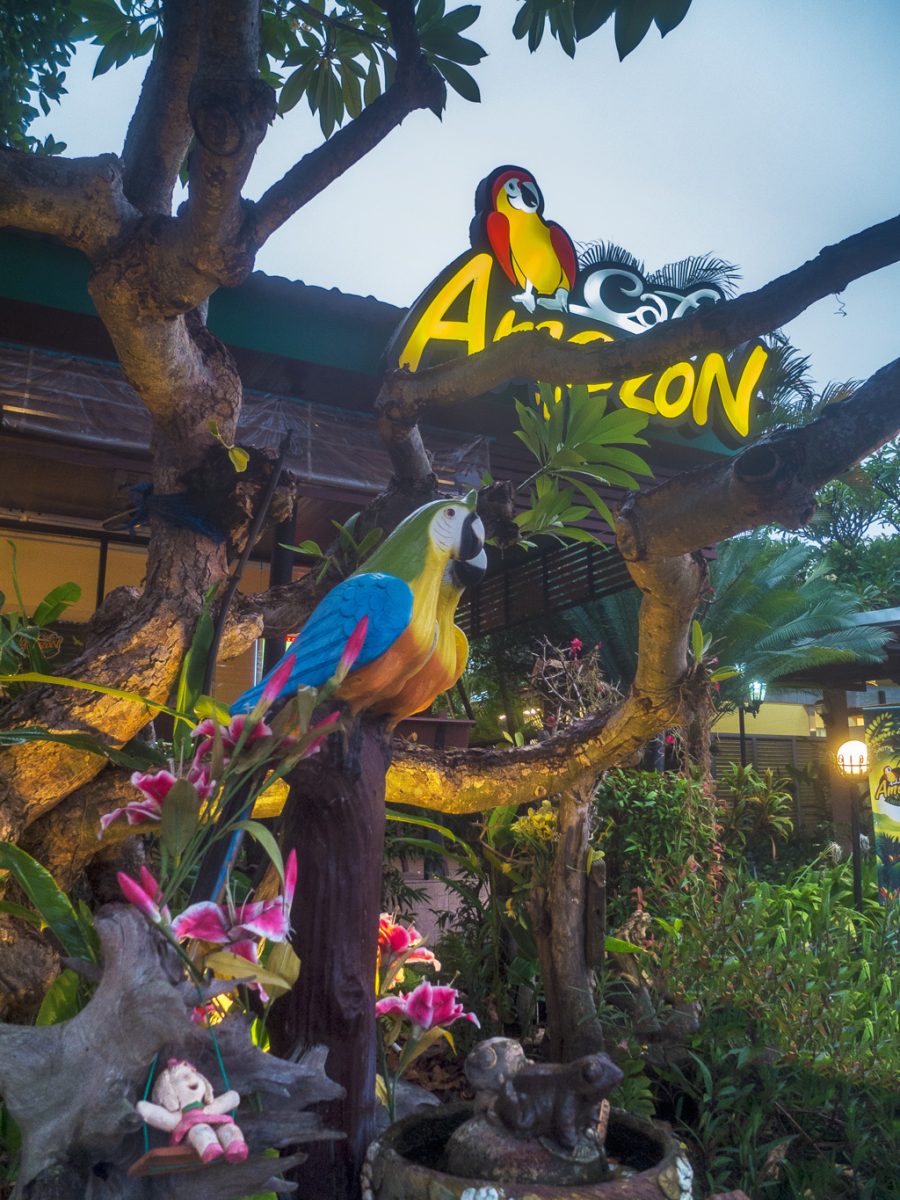 That’s it! I’m done for today with Amazon Café. 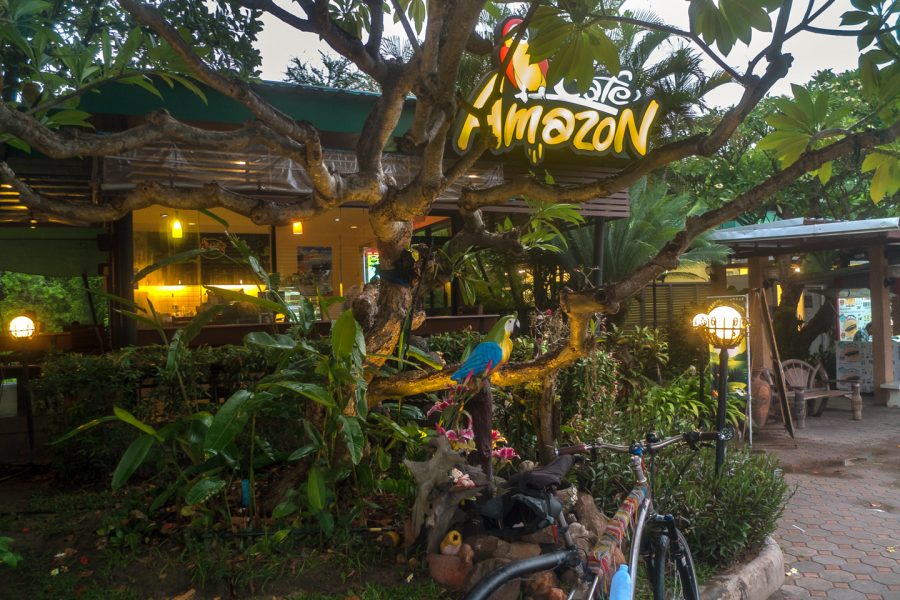 I’m ready to ride again for another hour or more before night. 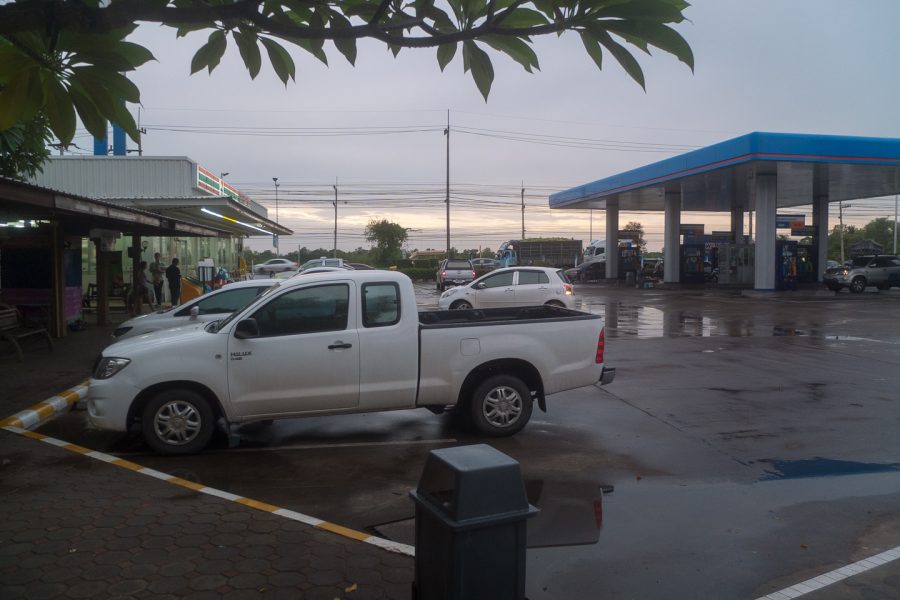 I’ve found on Maps that there is a public park about 20km away. The satellite view even confirmed the presence of shelters. Good!

Once I arrived there, everything I expected was on the spot. The only thing I couldn’t see from the satellite view is that under each shelter, there was large concrete tables and bench. I could have checked that with Street view though. Technology can be very handy :-) It did not prevented myself to suspend my hammock just above the table. I could even enjoy the view better than usually. There is always a solution :-)