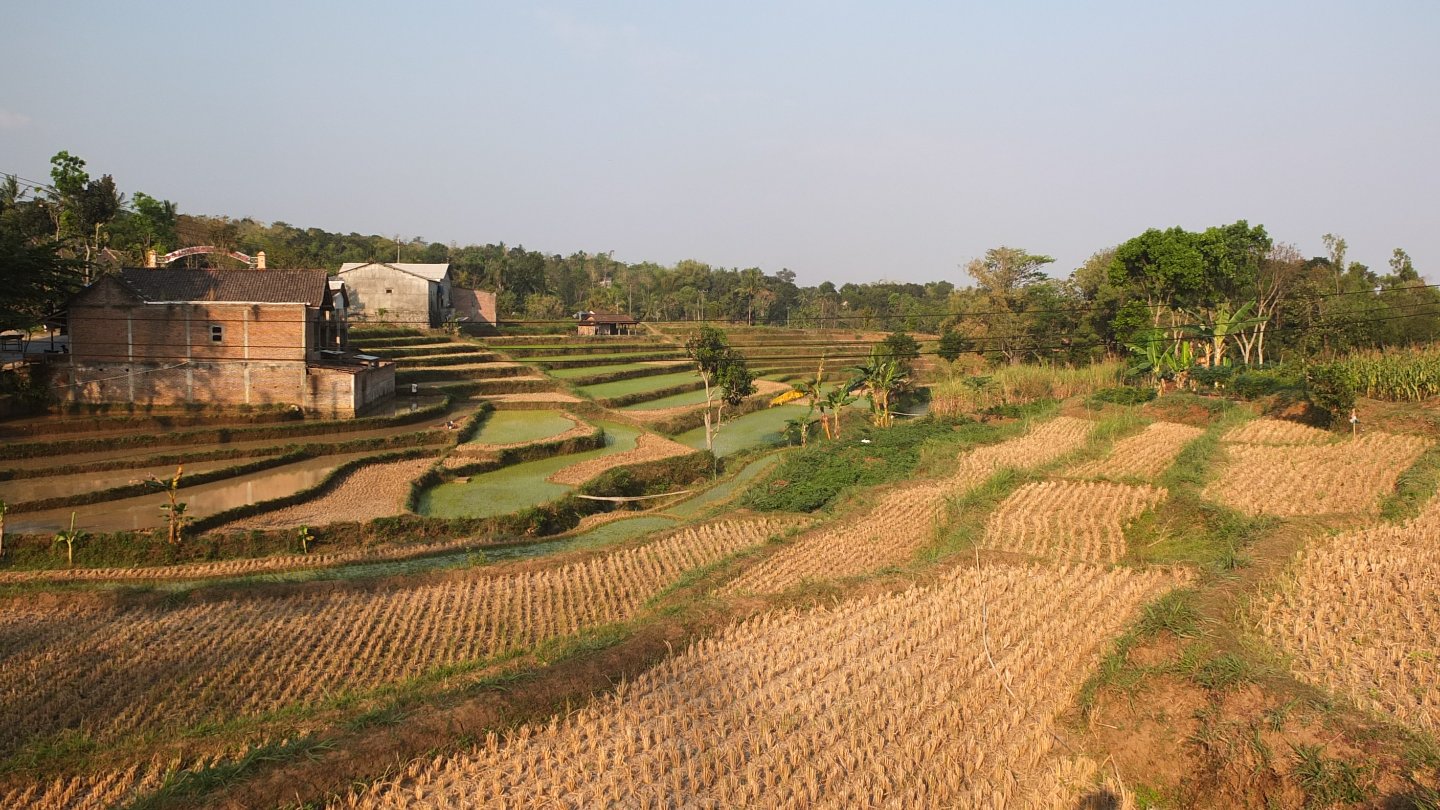 My target is to reach Borobudur which is a famous temple in the Yogyakarta region and the first point of interest when I started doing some research online back in Australia. so after I had to turn around Ngliman mount I can now head mainly west to that point. The landscape is not too flat, not too hilly, perfect to enjoy some good downhill and fast flat roads :-) The view varies as well and I’ve been crossing some rivers too. Indonesian people are still very kind and I’ve been invited again to spend the night with one of them. They don’t want me to use my hammock apparently :-) 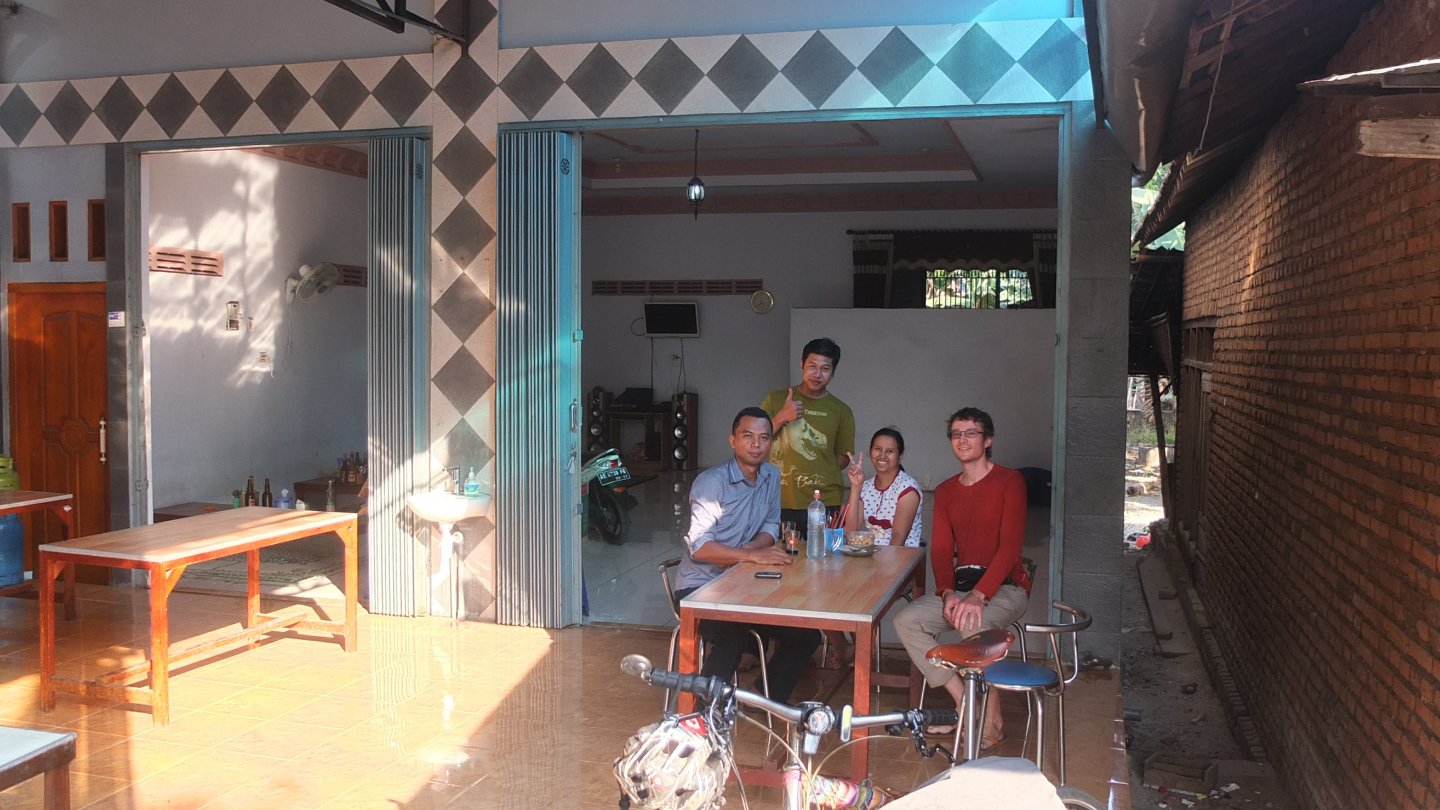 Before leaving this morning, Broto and his wife offered me the breakfast. We took some few pictures to remember each other and around 7:30am I was back on the road. 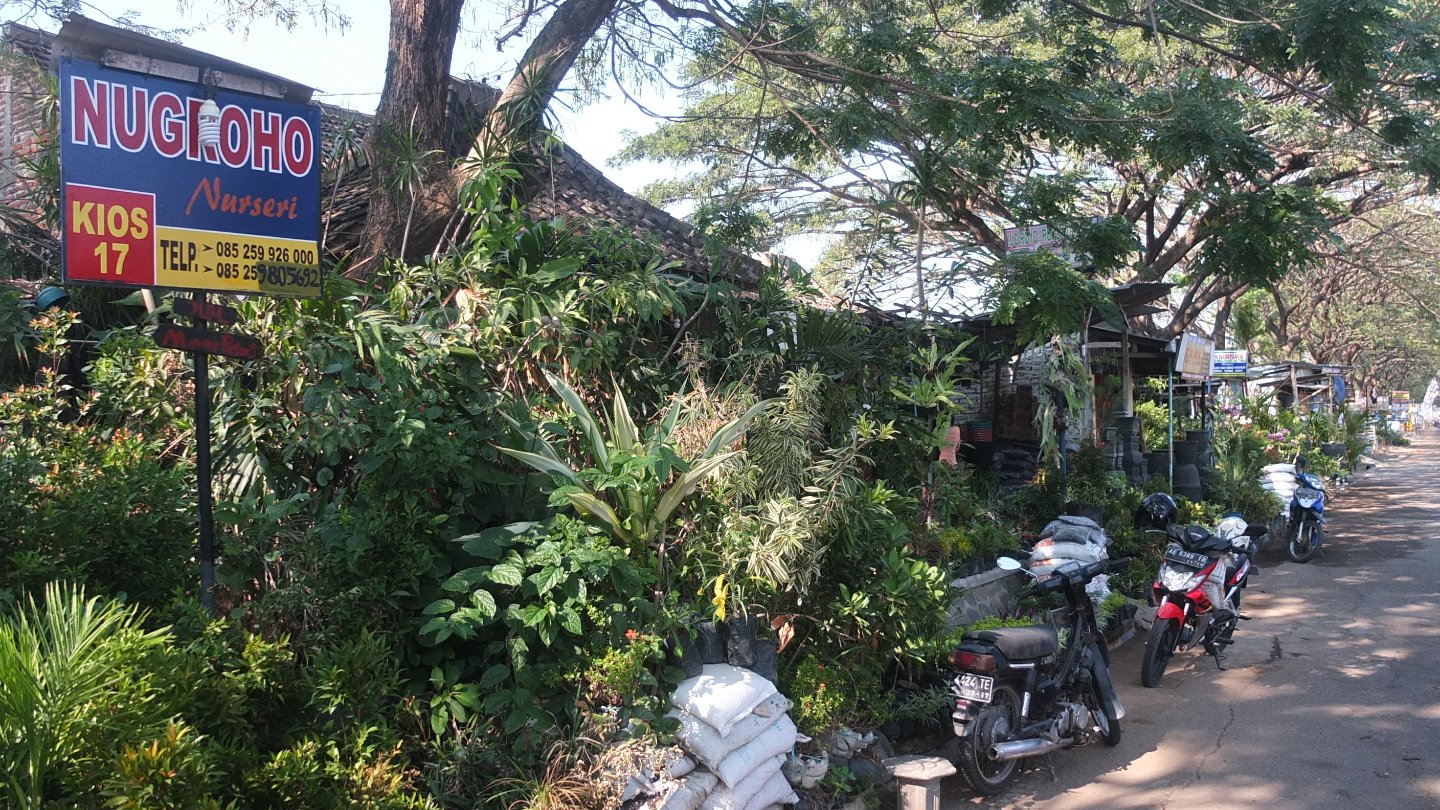 I’m approaching Ponorogo. The road so far hasn’t been really interesting. It’s straight, there is shops and houses all along the road so the landscape is a bit compromised. Fortunately, I still have my secondary activity which is saying hello to everyone who seems to be interpellated by what I’m doing and there is a lot. I can see some different kind of reaction depends of the kind of people :

I wish I could make a video with all those reactions because it’s quite funny and let me forget when the road is hilly or the temperature very hot like 40 degrees. 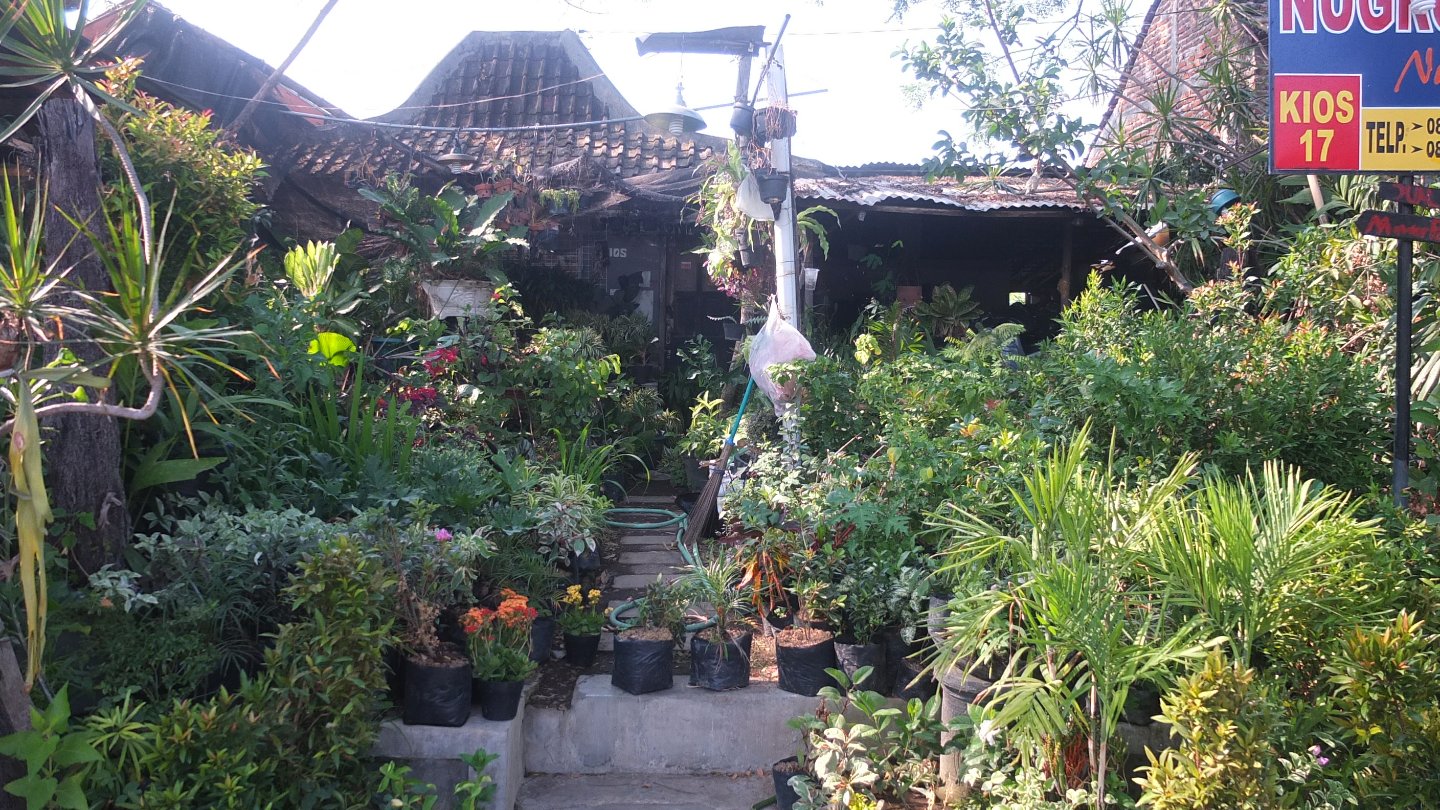 Just now, there is a section with nursery shops. It looks like a forest. Each of them has an entrance so you can expect to find the owner somewhere haha :-) 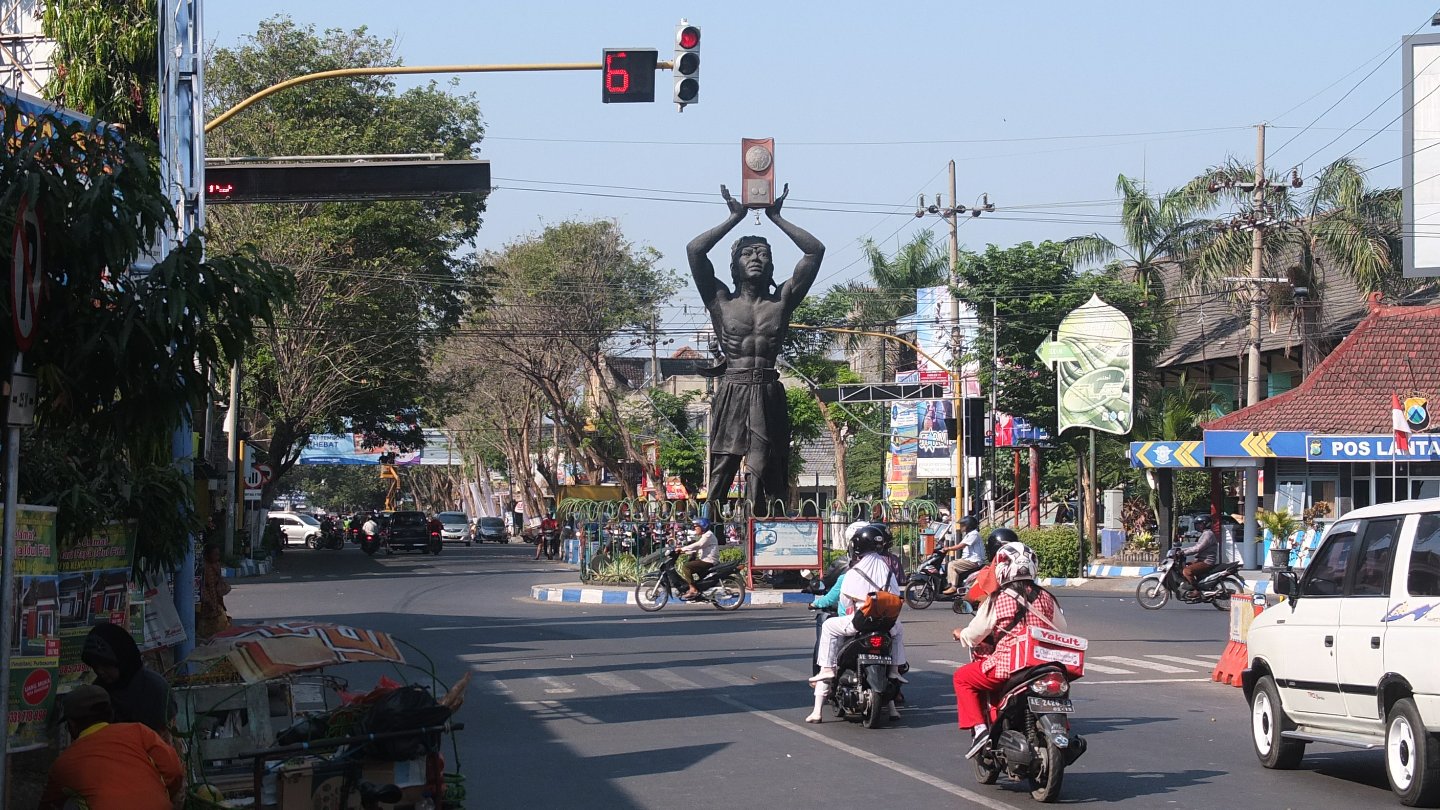 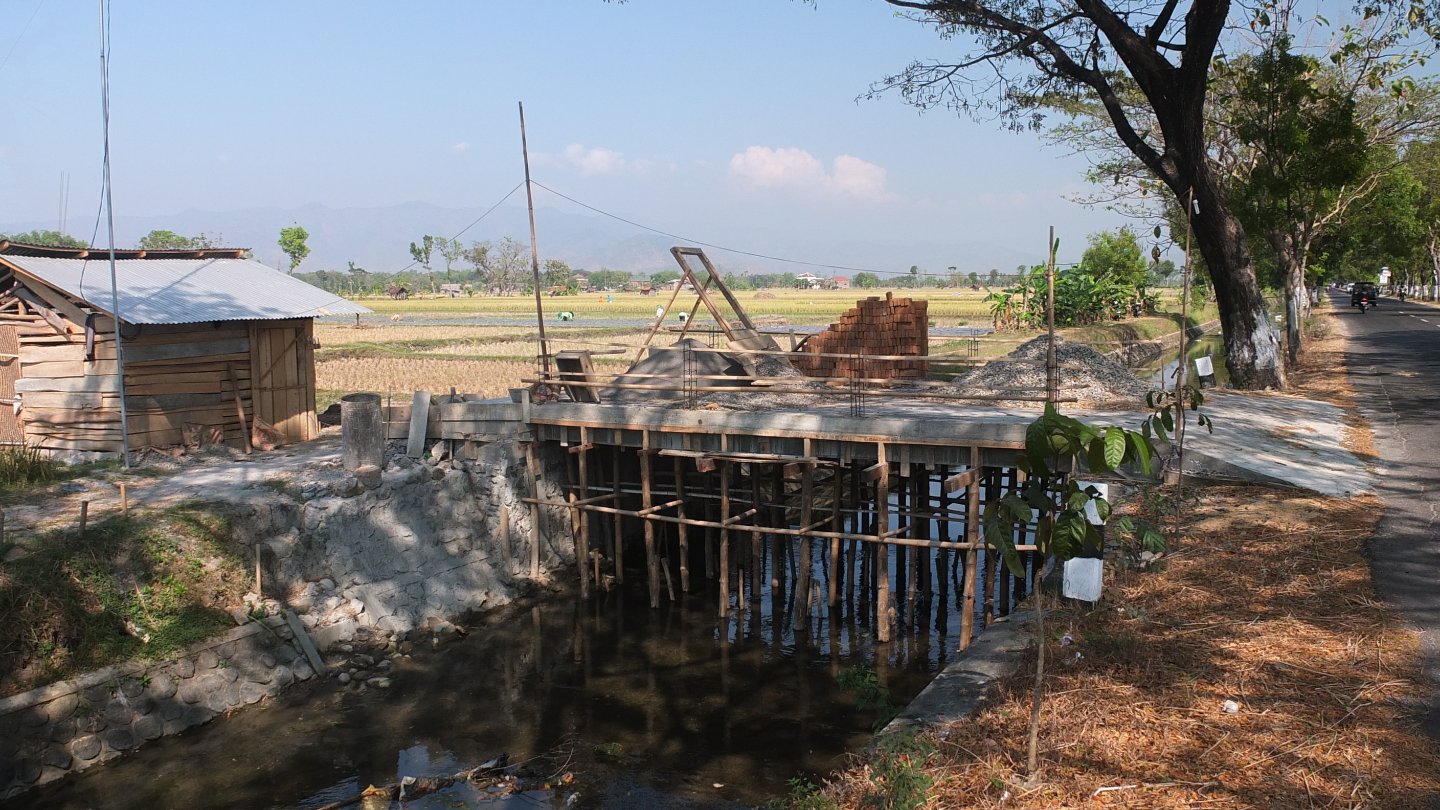 I’m out of town now. For now the road is still flat and I’m following a river. I like the constructions using bamboo. Bamboo is so useful here. They use it for everything! 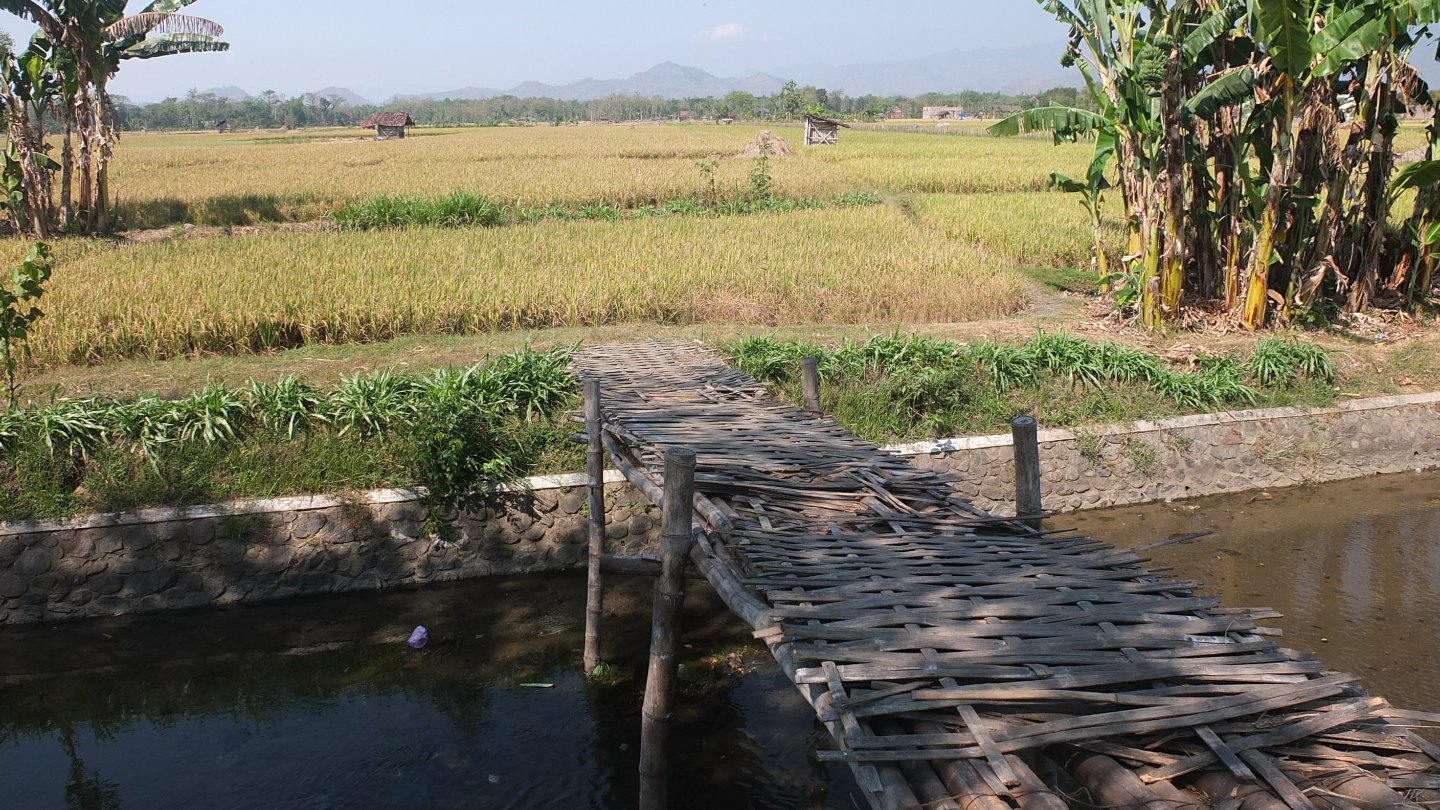 There is lots of old bamboo bridges like this but they tempt to replace them by concret now which is less charming. This one could be renovated a bit though. It doesn’t look really safe haha. 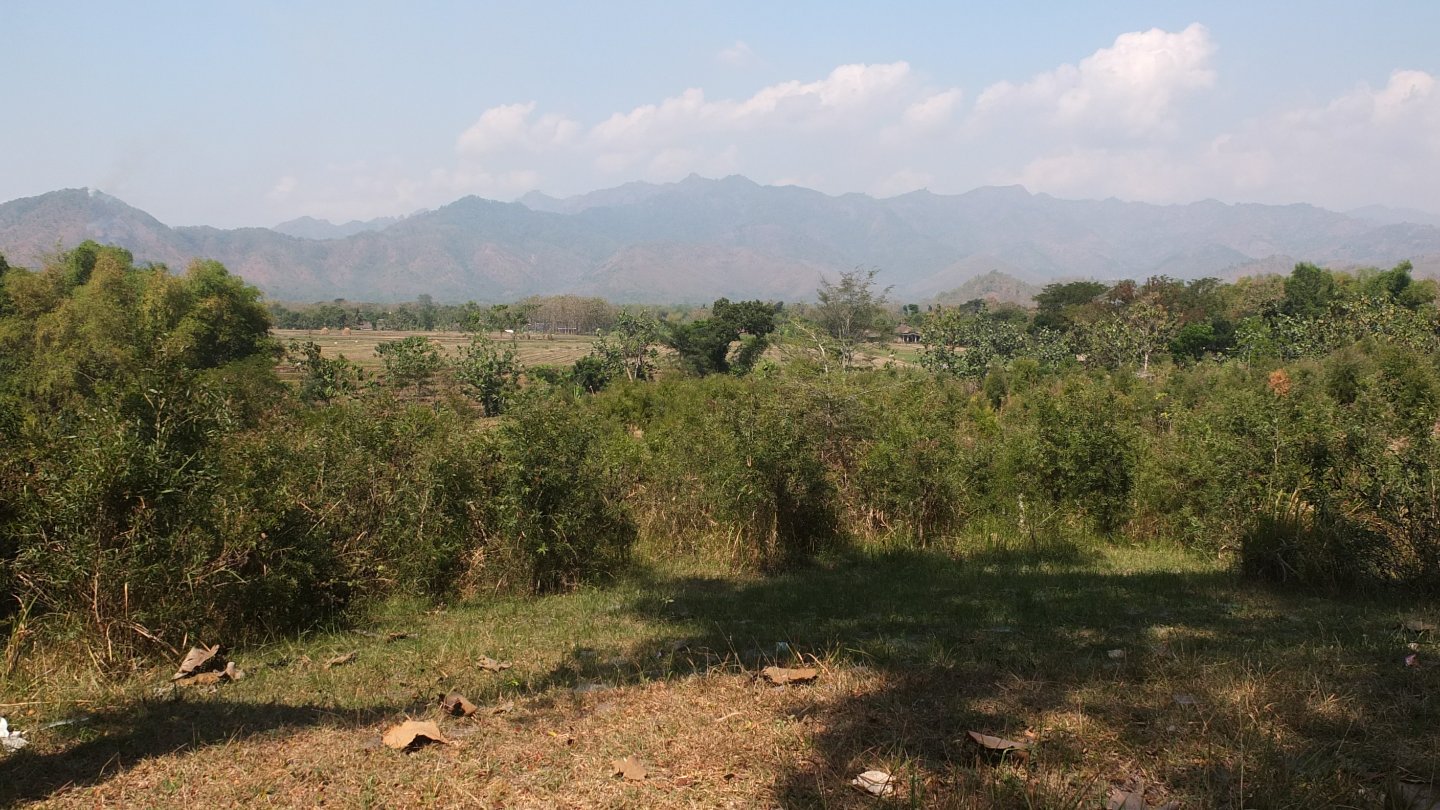 The road side lanscape. 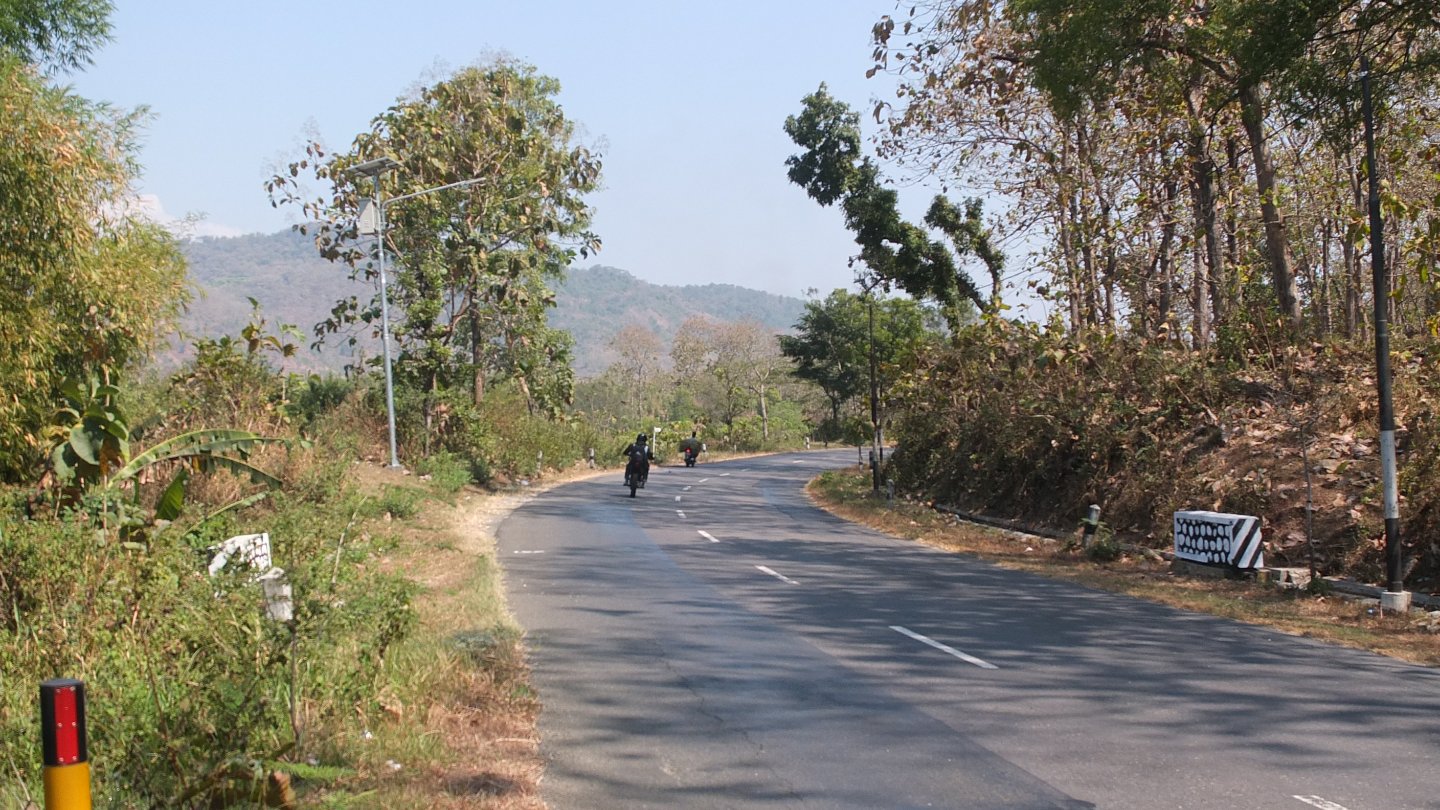 The hills are starting now. In fact the road is running between the mount Lawu and another chain of mountains on the south side (front of me in that picture). 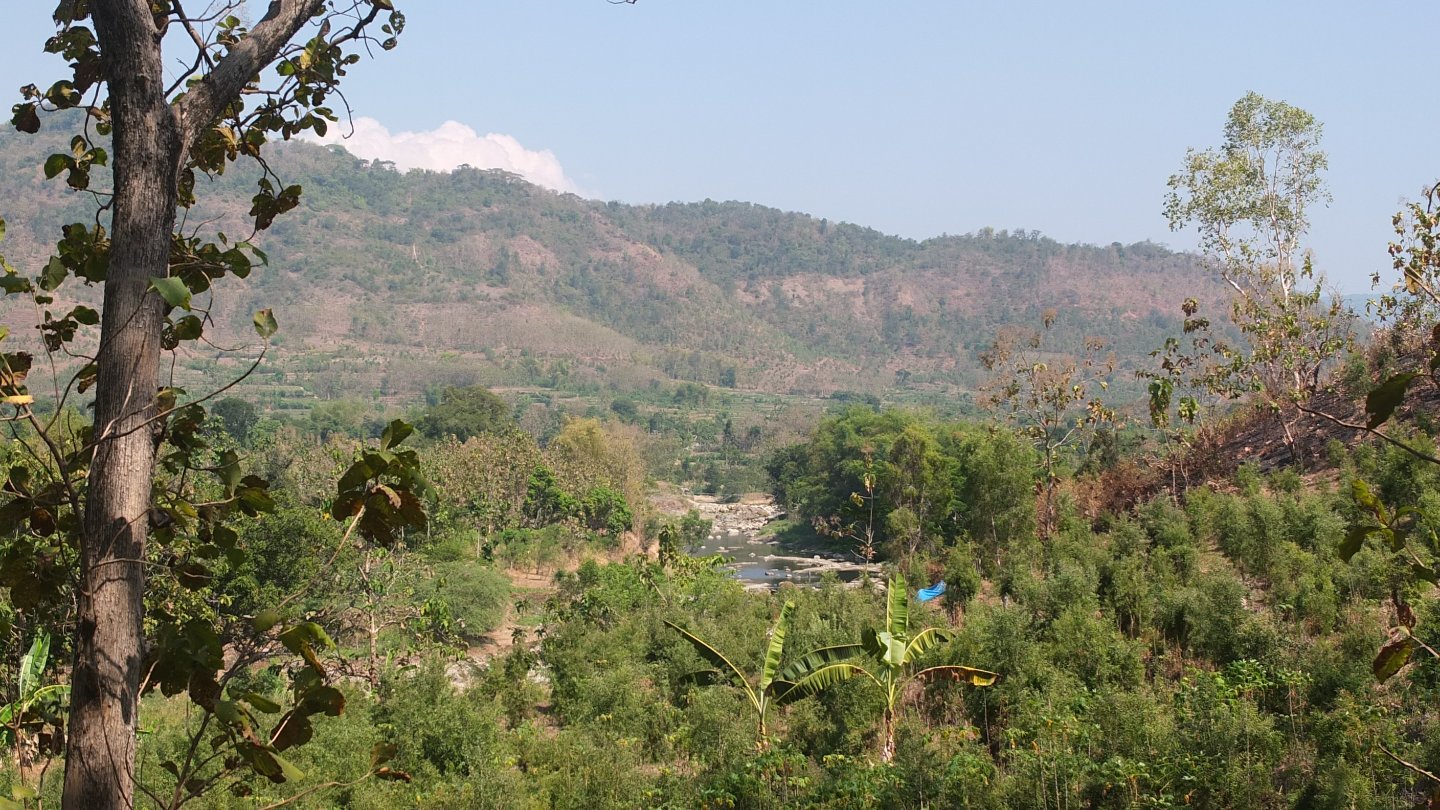 Their is a big river other there. 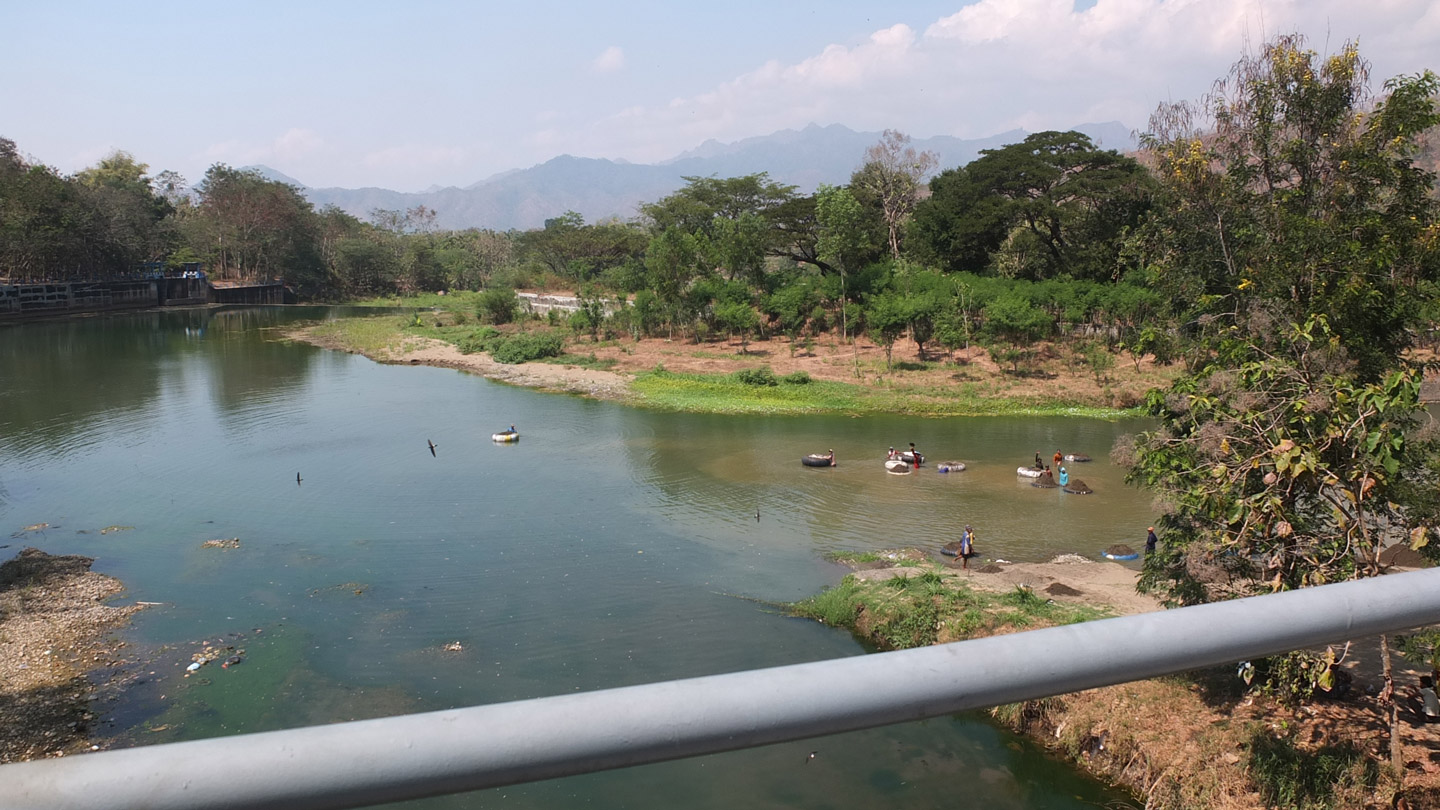 Crossing the bridge. The guys in the river shout some “halo!” from the river. 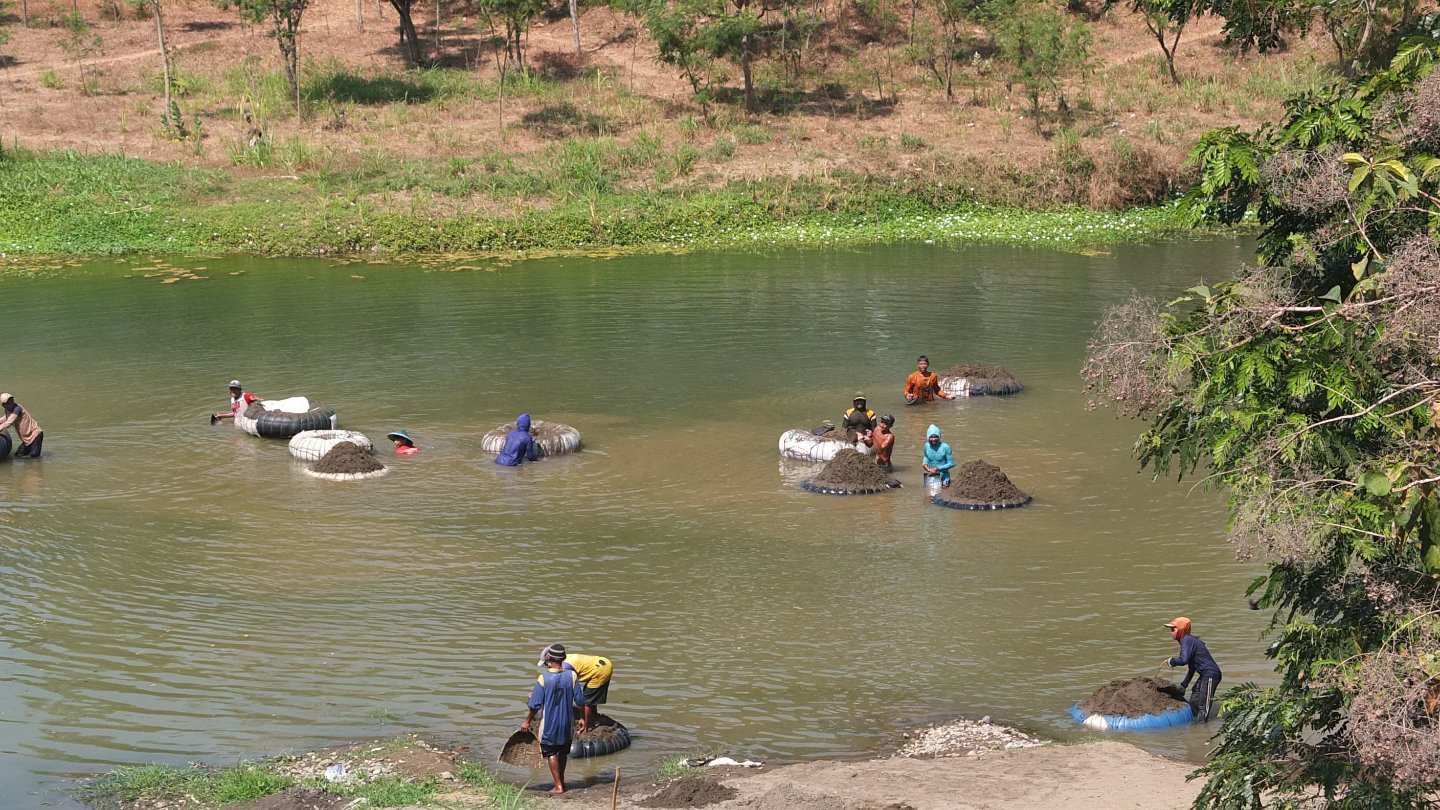 They seem to pick up dirt from the river by filling big buoy or maybe inner tubes from truck’s tyre. What a job. 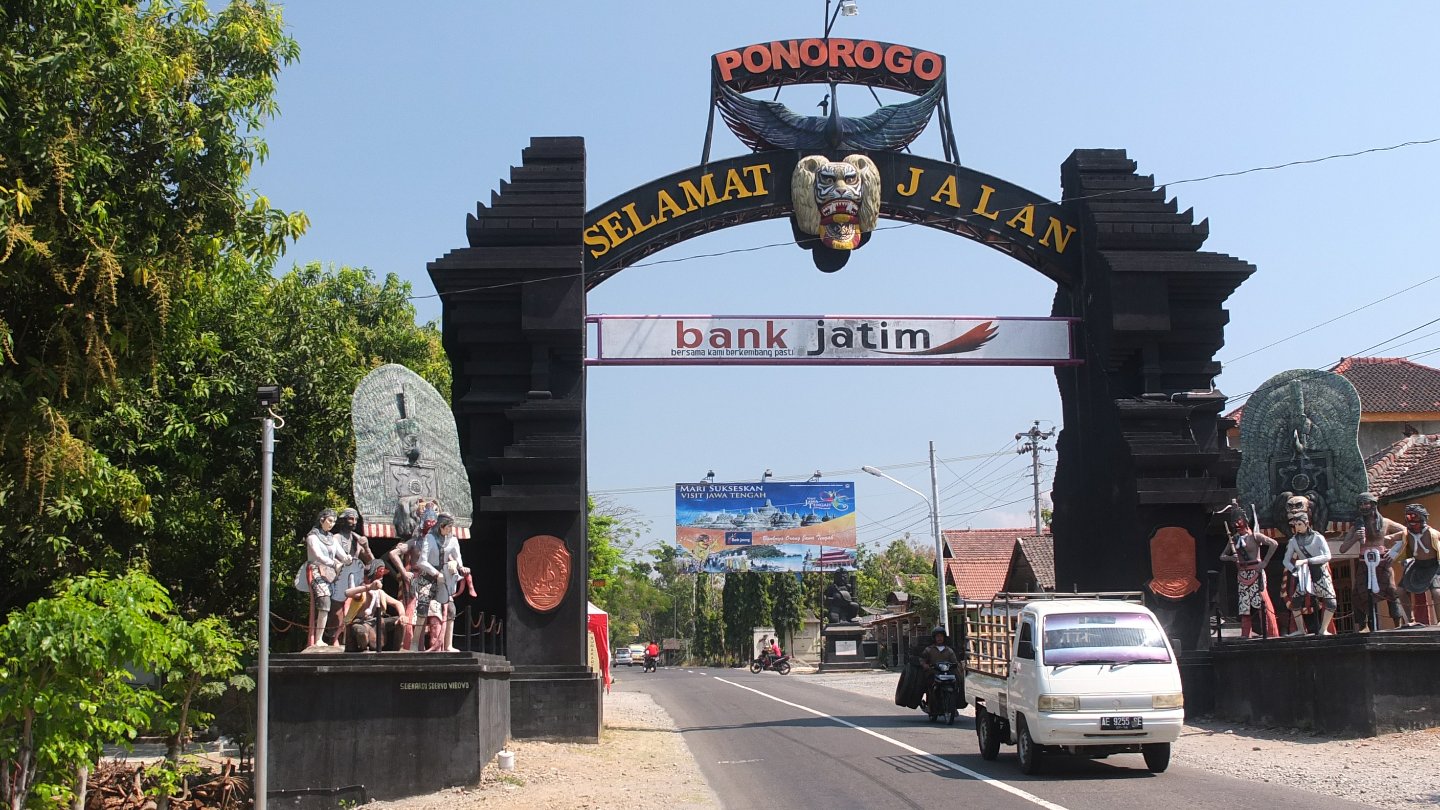 Hmmm, I thought I’ve left Ponorogo a while ago but this sign says selamat jalan which means Goodbye. Grrr, why there is a bank sign right under? I don’t like this. 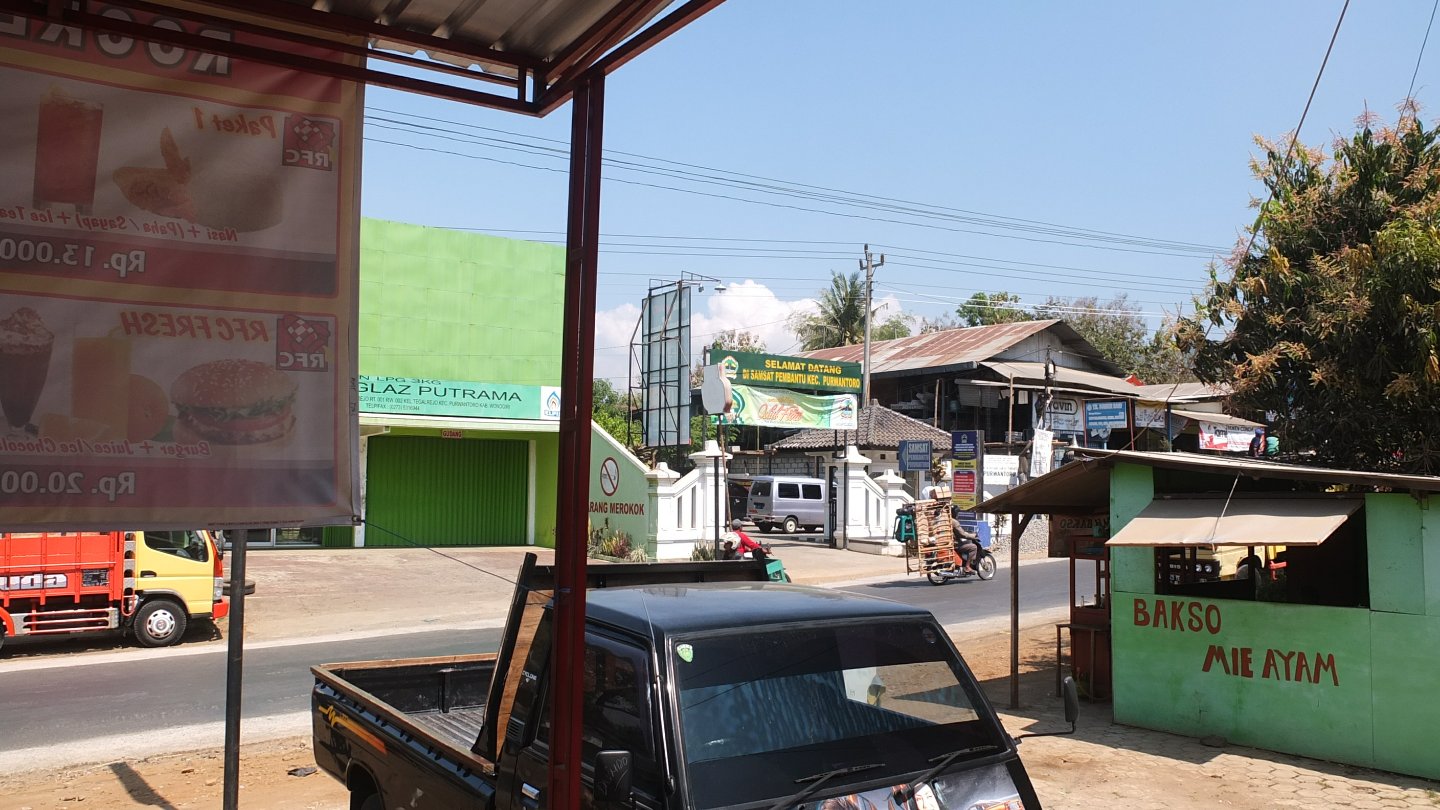 I’ve stopped somewhere for lunch. It’s 1:40pm and the temperature is unbearable. There is not much wind and I’ve been cycling uphill for a little while. I need a rest and some food. 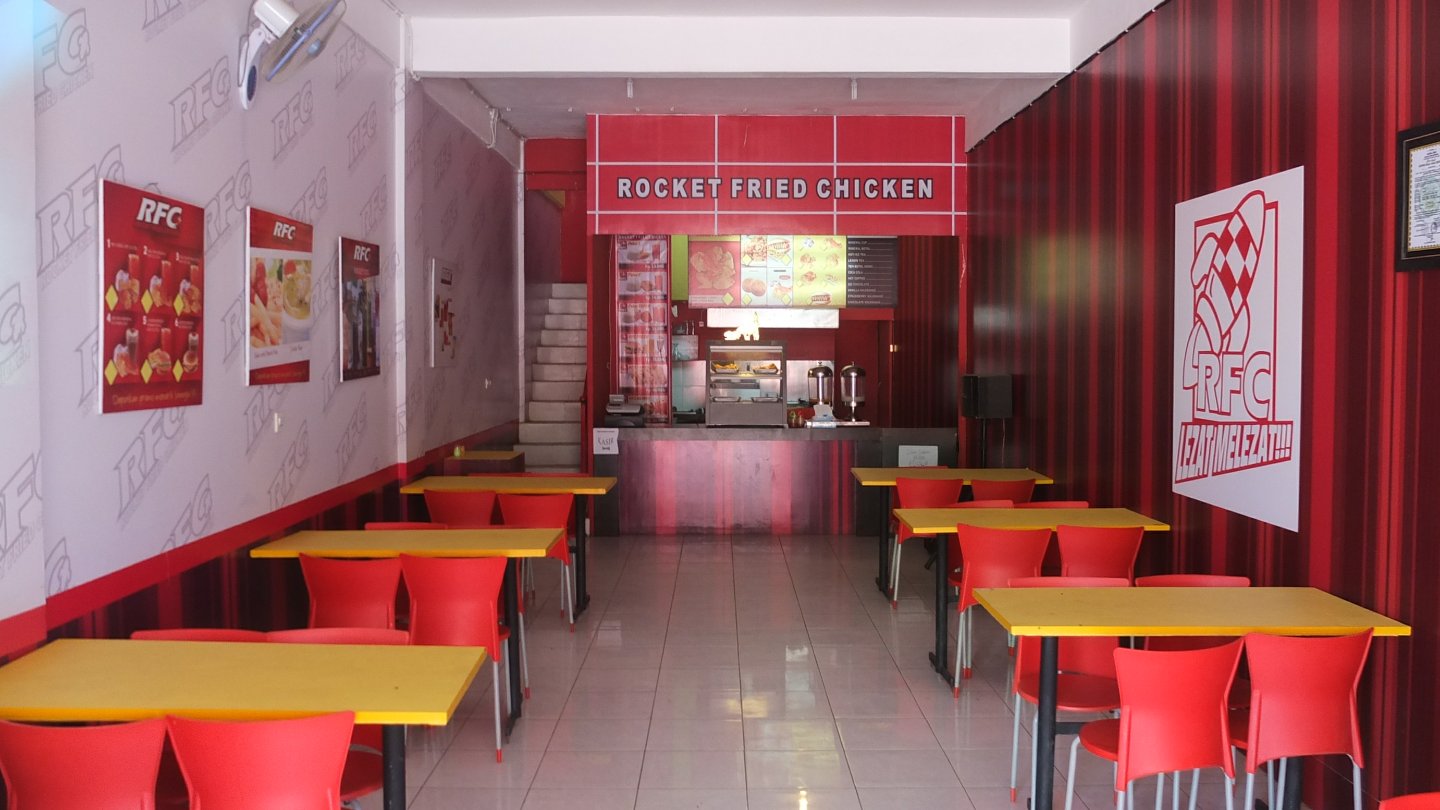 Well, that place was expensive and the quantities really small. I took a burger, the diameter was like 10cm. Then I had to get some hot chips separately. I could count them in 10s. I’ve spent more than 30.000IDR and I’m still hungry when normally 20.000 is enough to get a good meal in a warung. RFC is a ripe of for everyone. I know it’s still cheap compared to other countries but I get used to the prices and this one is expensive for the amount of food you get.

I’m surrounded by nice rice fields plateau and it’s not as hot now. 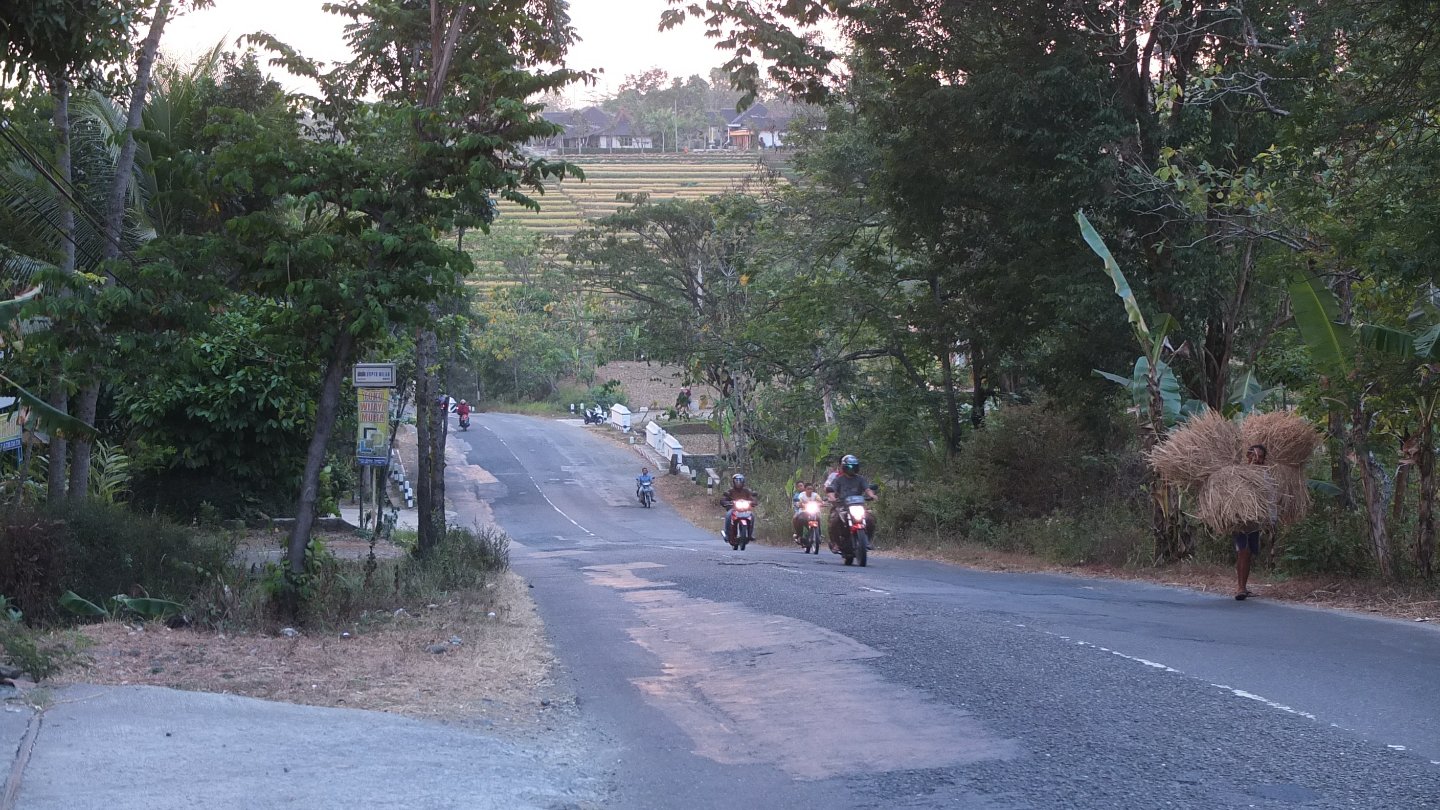 Why this picture? Look at the guy on the right hand side carrying two big bunch of straw. It must be hard. 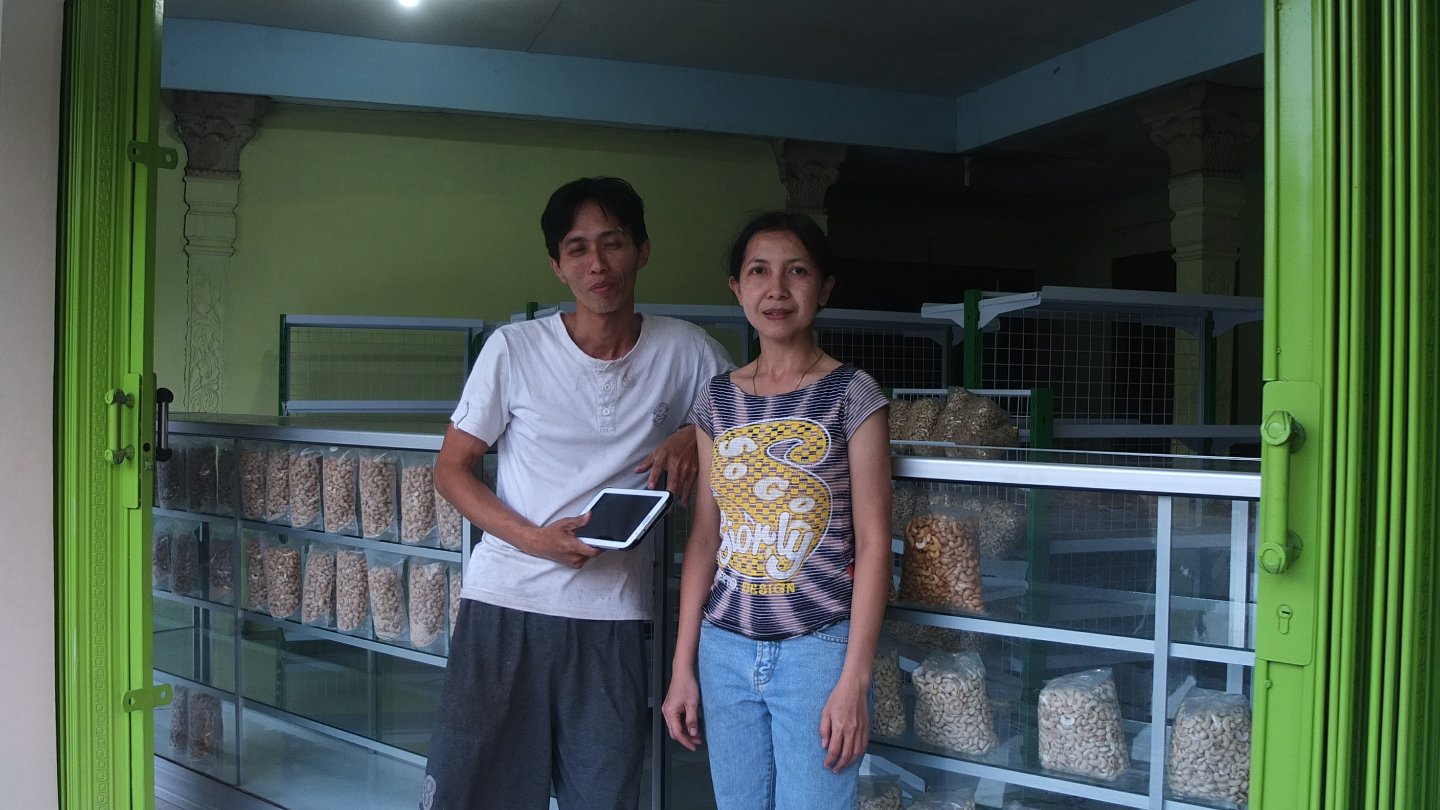 I was travelling through a tiny village when I’ve seen this little shop. They are specialized in Cashew nuts. 70.000IDR for 500g of organic cashew nuts. That’s a honest price I guess. As soon as the husband see my bike he took his tablet and took some pictures. I asked to have one picture as well :-) 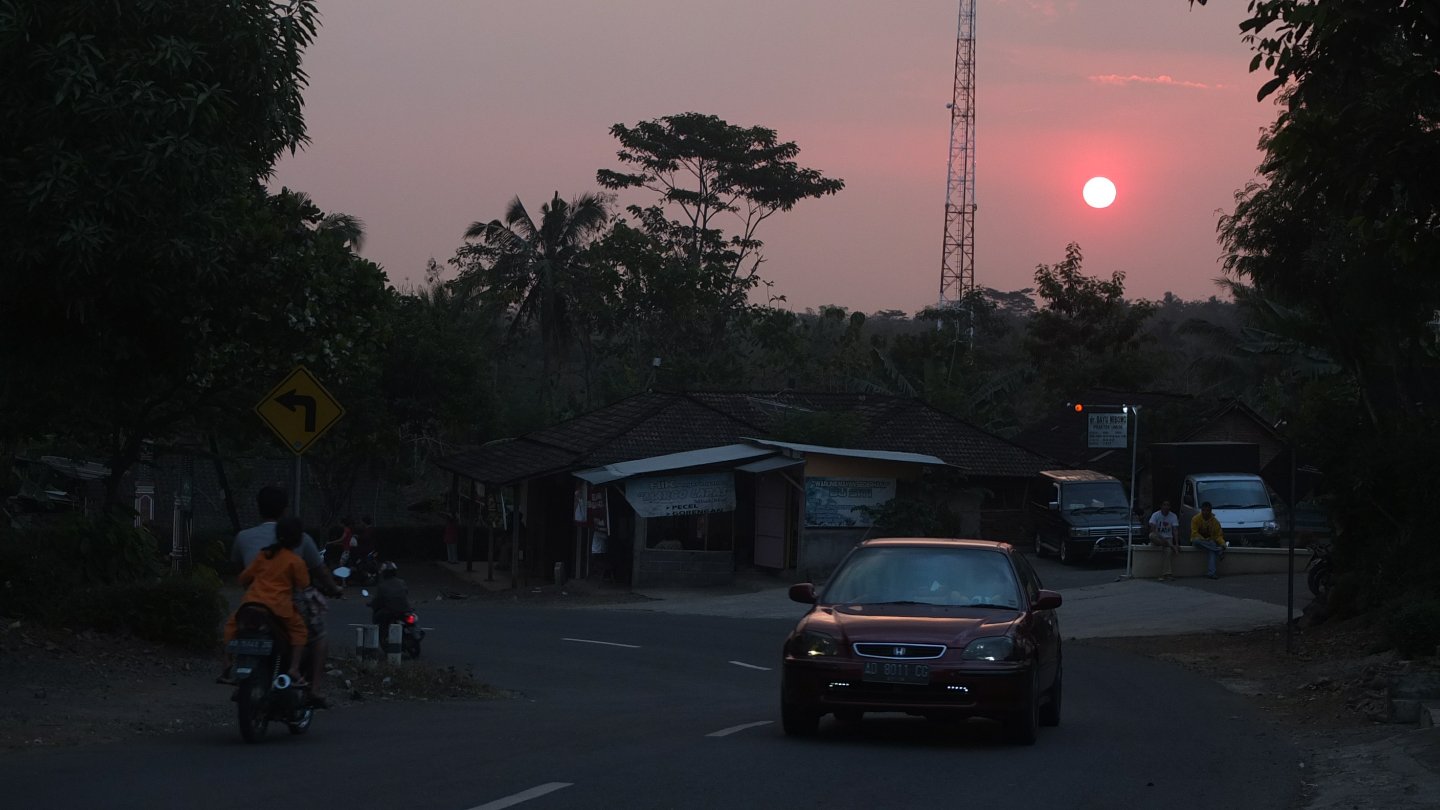 Wooooh, it’s getting dark… I must find a place where to eat and then another one where to sleep. It might be easy tonight because there is only small villages around. 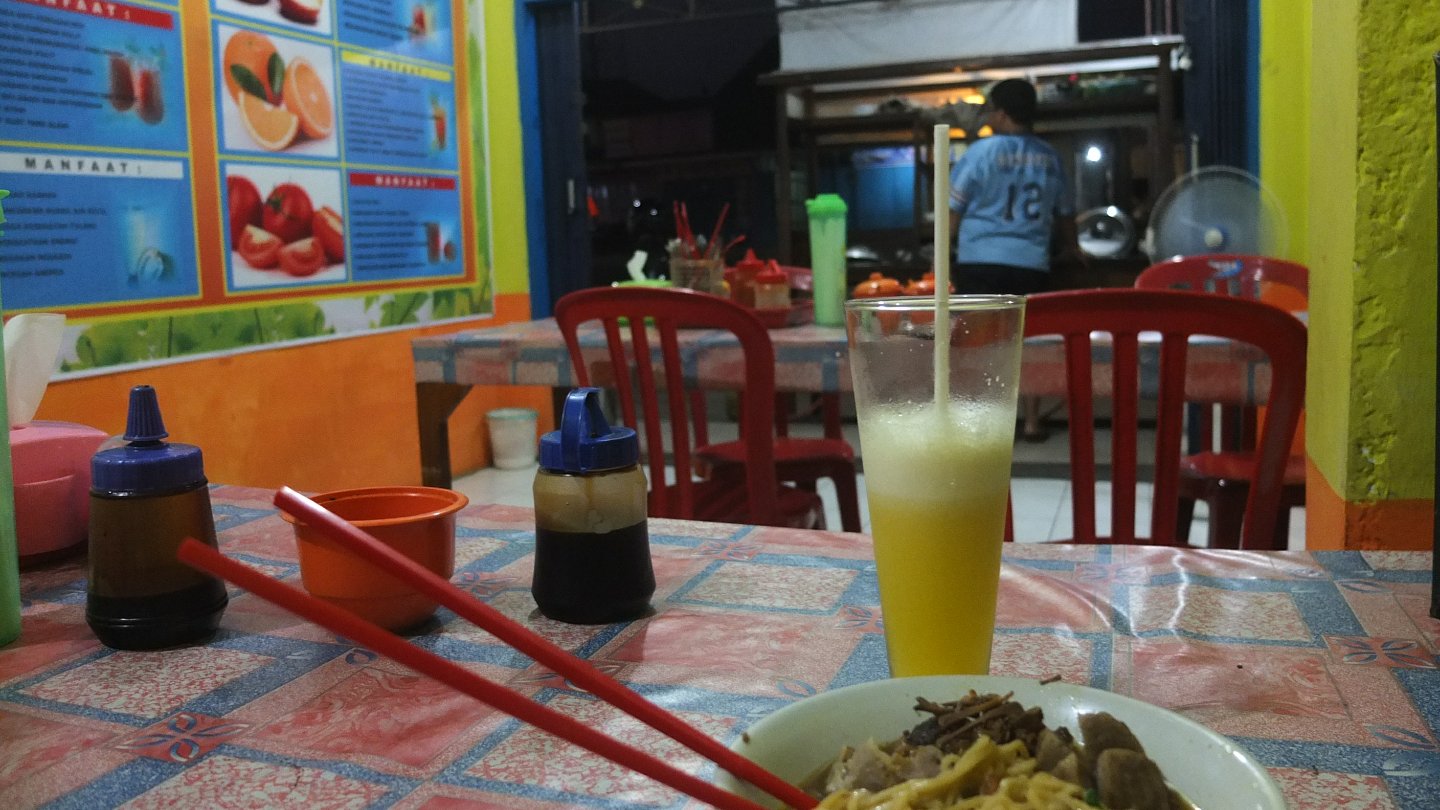 I’ve stopped in Sidoharjo, in a warung. They have chopsticks here! I’m happy :-) The family who runs the place is nice and I had a good conversation with the dad and his daughter Alisa. I should have taken a picture actually. 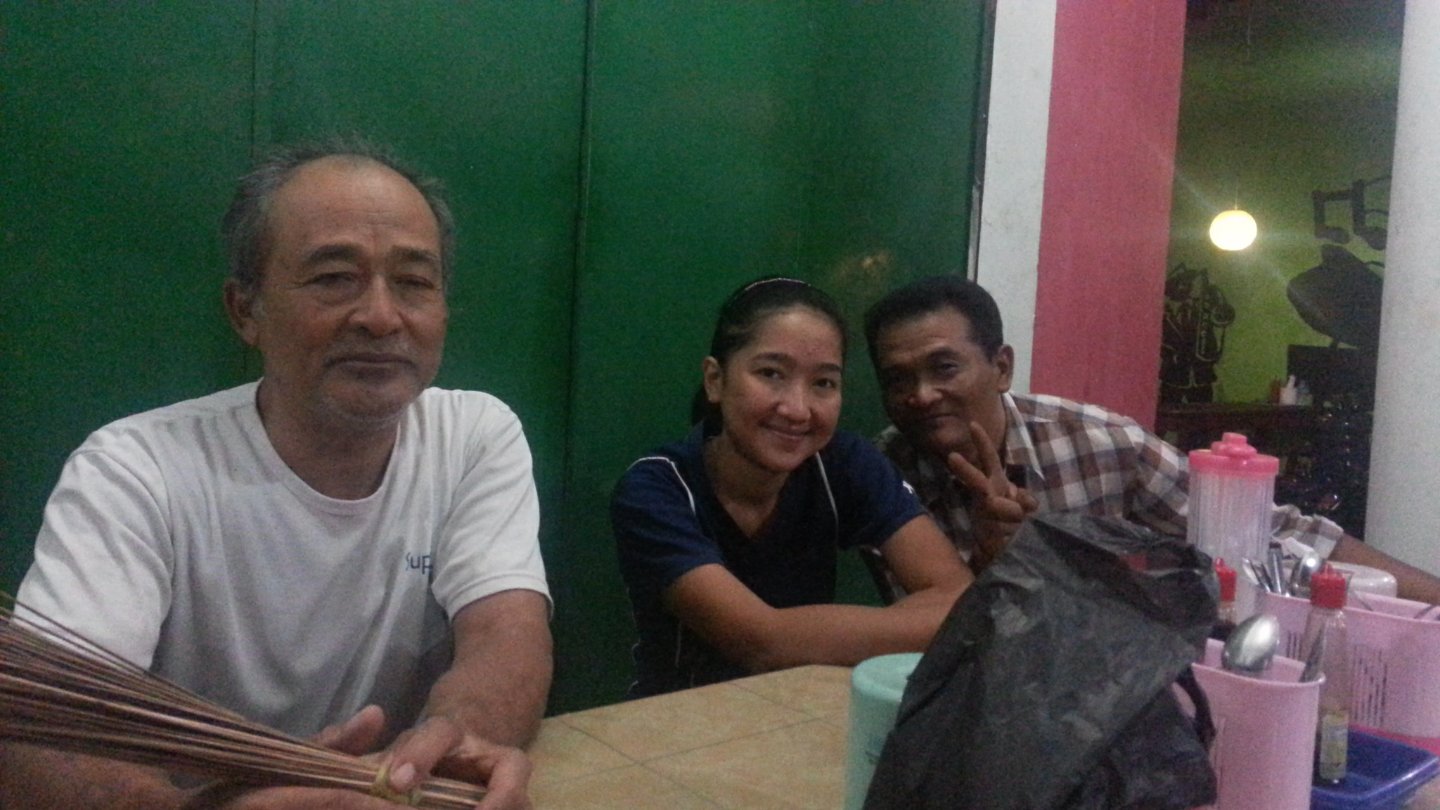 Later on, a couple from a warung next door joined us. They wanted to offer me some food as he is cooking Sate Ayam (Chicken Sate) on sticks. That usually smells so good when I pass next to a warung like this. But I just had a meal and was full. They insist and I finally got a Sate Ayam take away and a tea. Shame on me, I don’t remember any names now because I’m writing this post a week later. 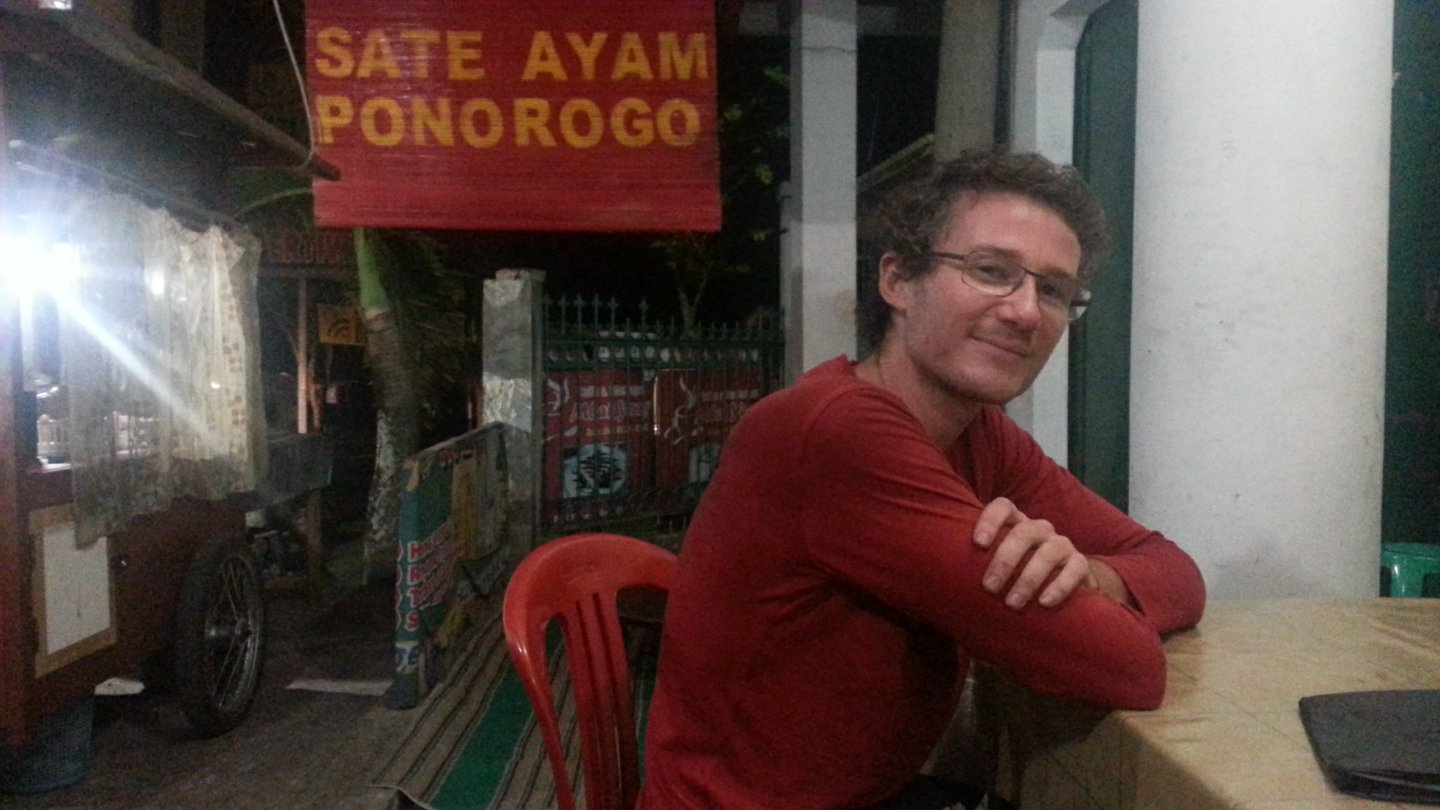 We stayed at their place another hour maybe. The young woman was frustrated because she could understand what we said but could not speak english. But we managed to understand each other :-) The man on the right hand side of the previous picture is the cook and the one who speak english.  He lived 9 years in Taiwan and speak 4 languages : Indonesian, Javanese, english and Mandarin. Tonight I’m going to sleep at his place. Thanks so much!