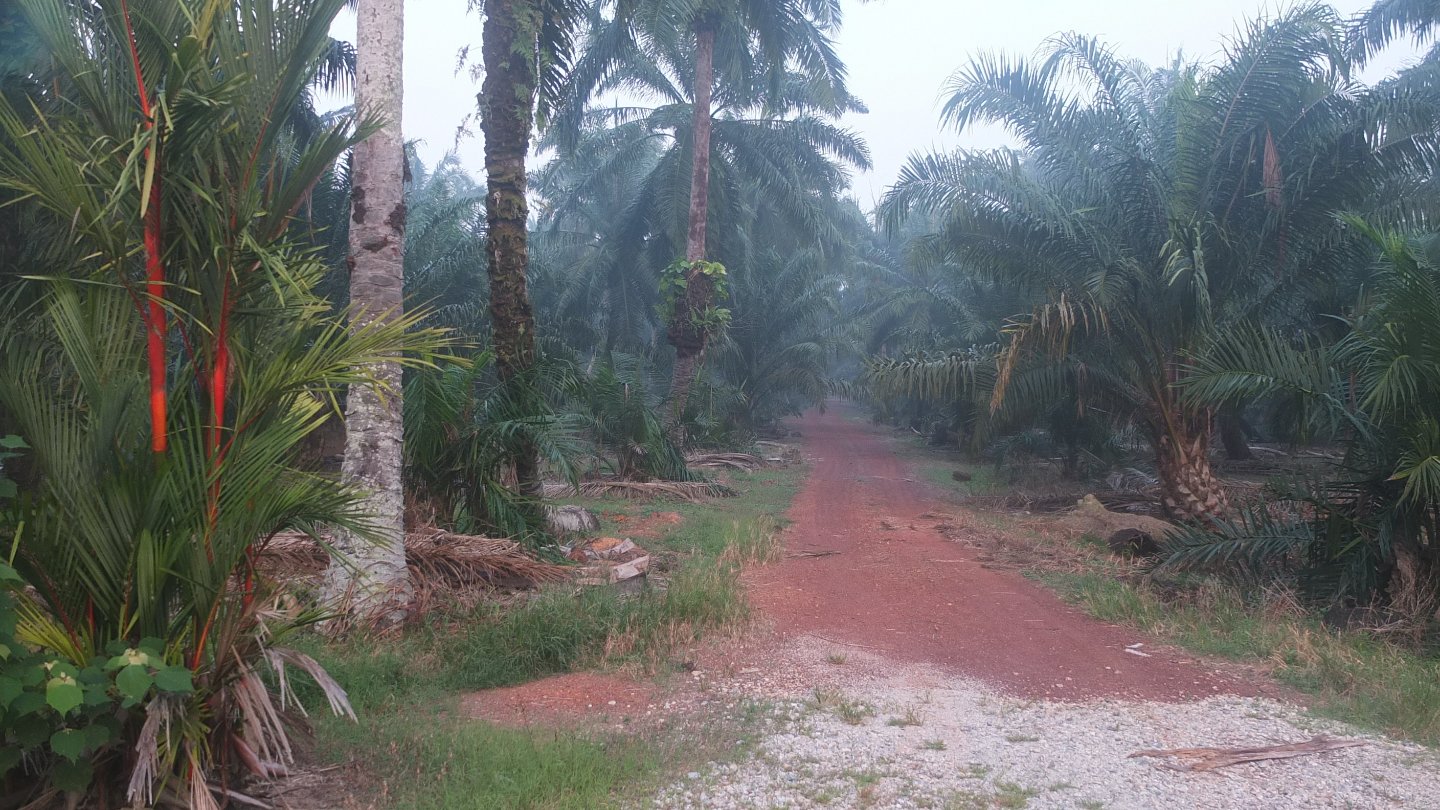 My first night in the bush in Malaysia was quite good, except the moon is too bright! I could not sleep because of this. My mask was somewhere in my bag but being too comfy in my hammock I did not want to go out again and let mosquitos enter inside. Today was kind of a short day cycling. I’ve done lots of things on the side like washing my clothes and go to the doctor again. I forgot something important, taking pictures! It happens… 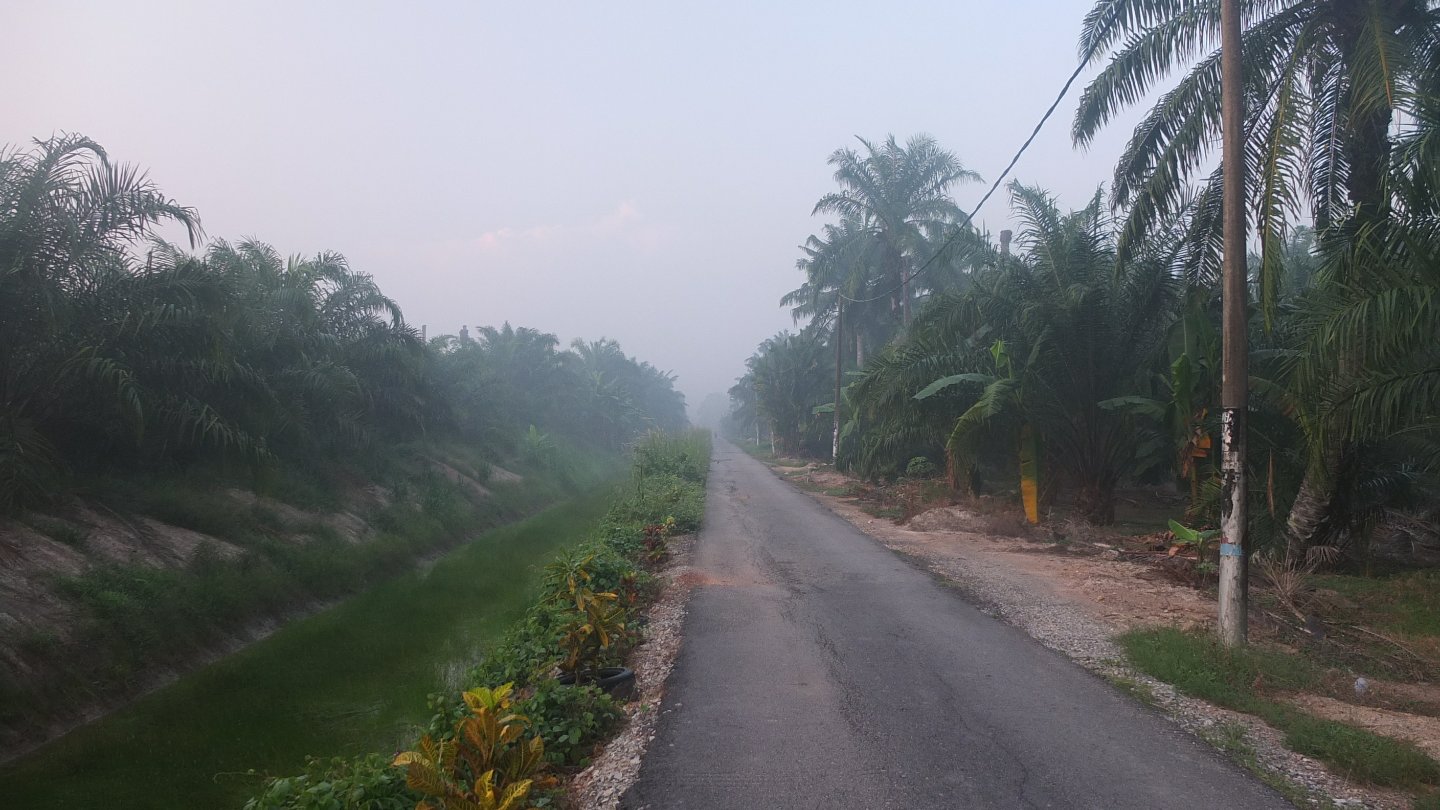 Yesterday night I’ve found a warung down this road which is coming back to a major road. I had my dinner and cycle around the block to come back here. Now, I’m coming back there to get breakfast :-)

So the plan for this morning is to stay on the main road which is not so busy. I’ve stopped around 9:30am to get a drink. The guy in the kitchen was making a kind a thin crepe that he was twisting in his hands to make it larger. Then he was frying the thing. The result looked good so I chose to have one plus another drink :-) A short time later, a guy came to me and said he will offer me my meal. Thank you :-) Malaysian people are much more reserved than Indonesian but they are as nice :-)

I came back on the road until it became unbearably hot and stopped just before a bridge that leaded in the city of Batu Pahat. Here there was maybe 20 different warung next to each other and a long and big roof was covering the tables and chairs. There was some public toilets too. Perfect place for me. I started washing all my clothes, put them on a fence under the sun next to my bike and went order some lunch. Then I worked on my blog for a while.

Finally, 4pm was coming and I was ready to go.

Something I never mentioned here is I’ve got a little problem with my left leg. I got some wounds from my bike’s pedals and another silly one when I hit a chair in Victor’s guest house in Malacca. I did not take care enough and it got infected. The left upper leg ganglion reacted. I’ve seen a doctor in Malacca and took half the antibiotics he pre-scripted to me so things did not get better. Today I still have this big ganglion, and even a second “ball” just above.

I must do something for this so I’ve cycle just on the other side of the bridge and found the clinic previously checked on internet. The main room was full with with patients waiting for their turn. I’ve waited maybe an hour and got out with new antibiotics, the one I should have accepted the first time. In five days, I will have to check again with another doctor. In Malacca, I paid 57 ringgit. Even the woman wrote on the bill “Fifty seven ringgit only”, haha. Effectively it was cheap for seeing a doctor + get medicine. Here in Batu Pahat, I paid even less: 32MYR! Almost worth it :-)

It was maybe around 6pm, when I left that city. This time I will avoid the main road to multiply the chances to find a good spot for the night. The road which follows the river down to its entrance is not the best road I’ve took until now. It’s actually industrial here. Fortunately, after around 7km, when I turned east, the landscape became the same as before again: Flat with palm oil trees all around.

As I anticipated, I found a warung on that secondary road and a spot where to sleep on a tiny road in the area. I’m going to spend my second night in a row in my hammock :-) and this time I’ve got the mask!