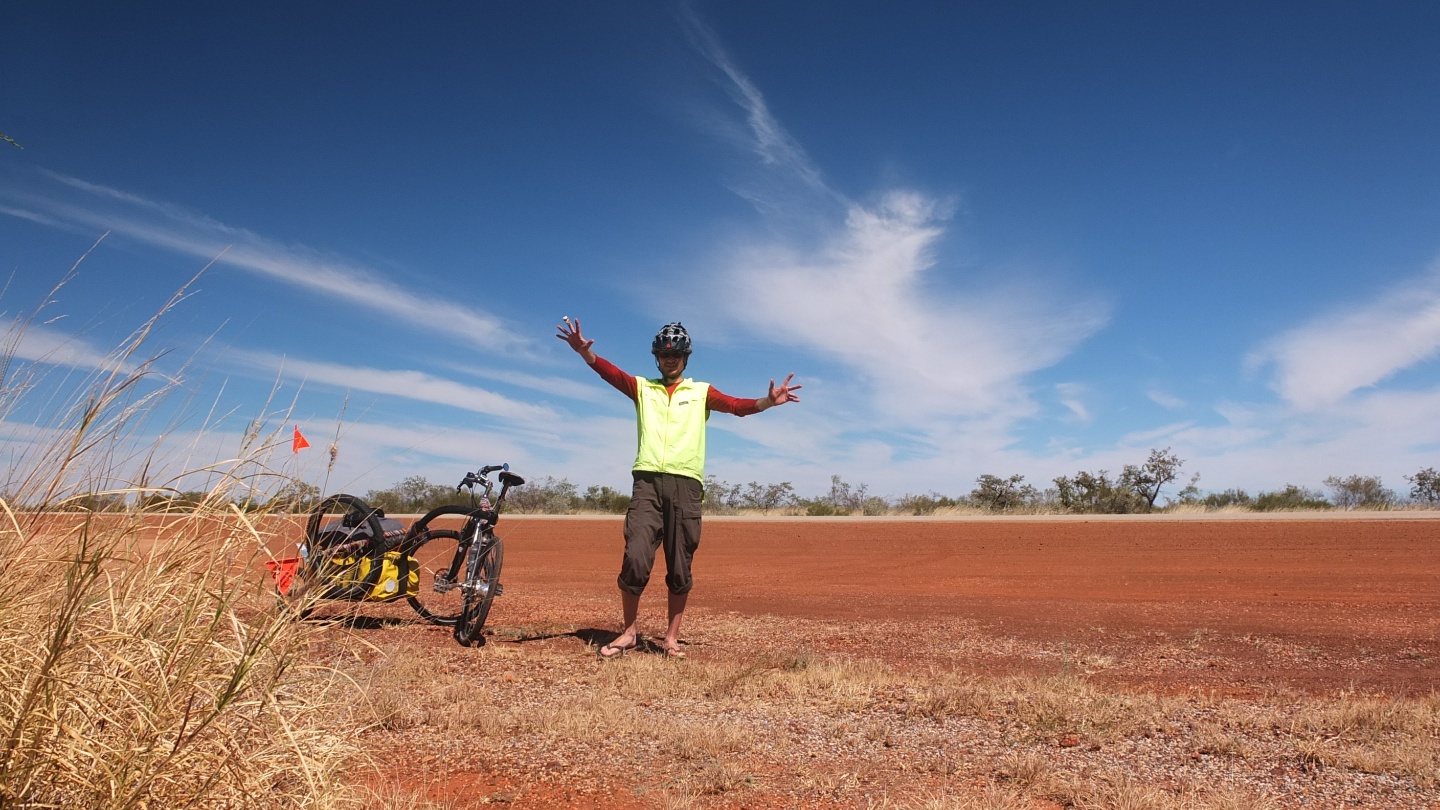 Today is the first day when I can ride some few hills. There is still some long flat bit but I can enjoy the view sometimes. I expect to ride at least until Eliott and then I will improvise. I will sleep there or continue a bit more. I’ve met another cyclist too today. An English guy, George. He decided to cycle when he was in Darwin and he is going down to Adelaide. It’s gonna be cold down there, good luck man! 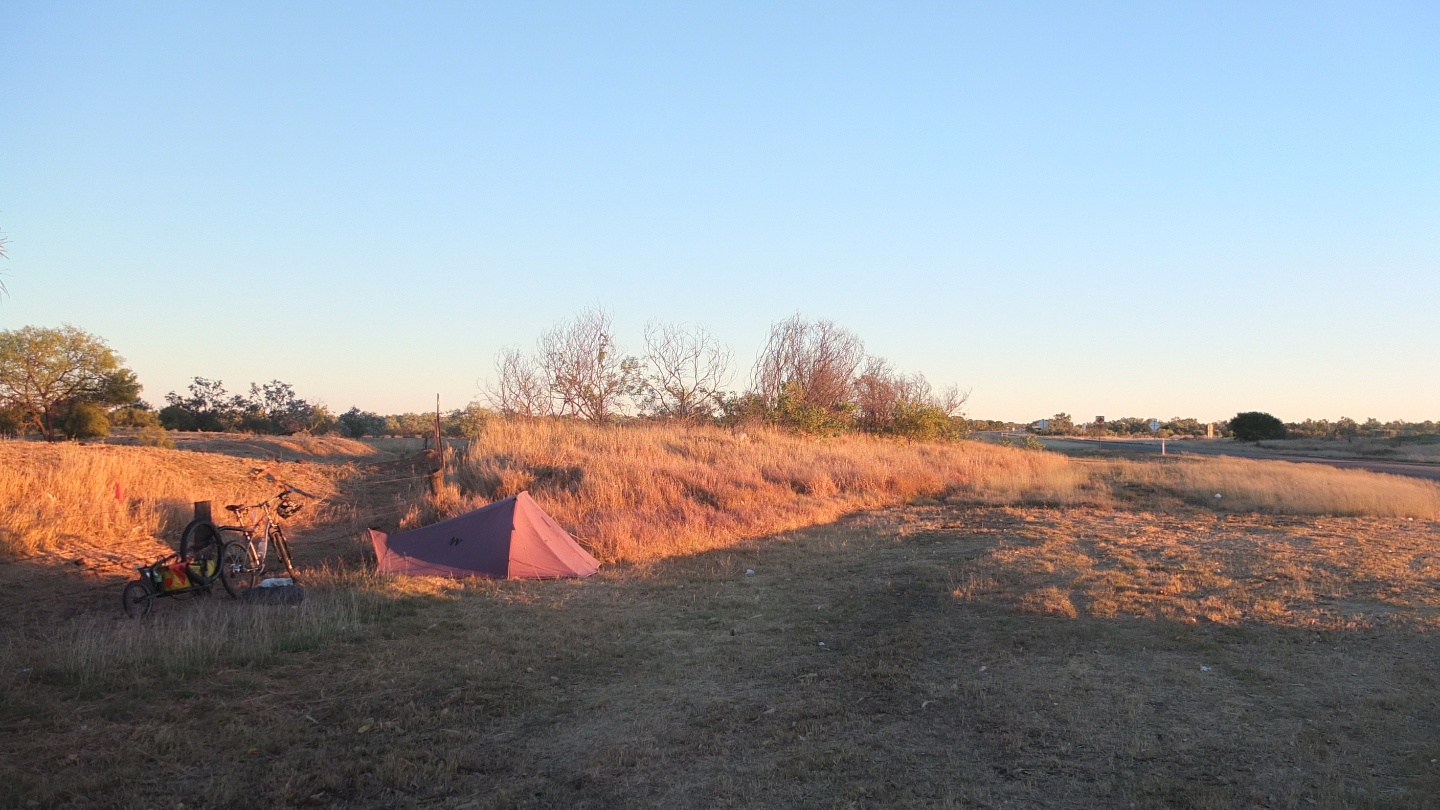 This is where I pitched my tent for the night. No far from the highway. I did heared few truck during the night but I was certainly too tired to bother. 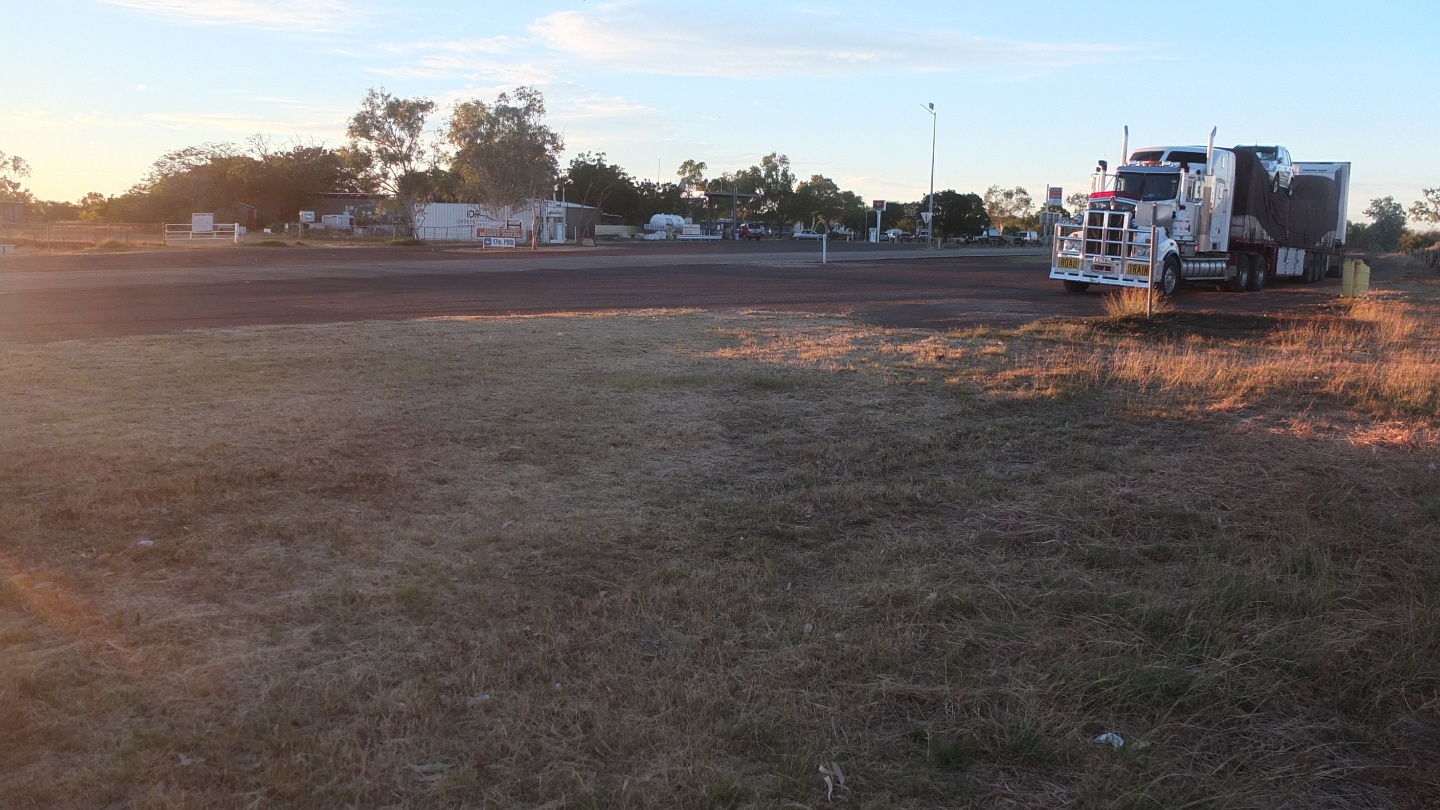 The roadhouse and the campsite are just over there :-) I know I can pay for a shower so I will pack my stuff, get a shower, have some breakfast and start clean today. 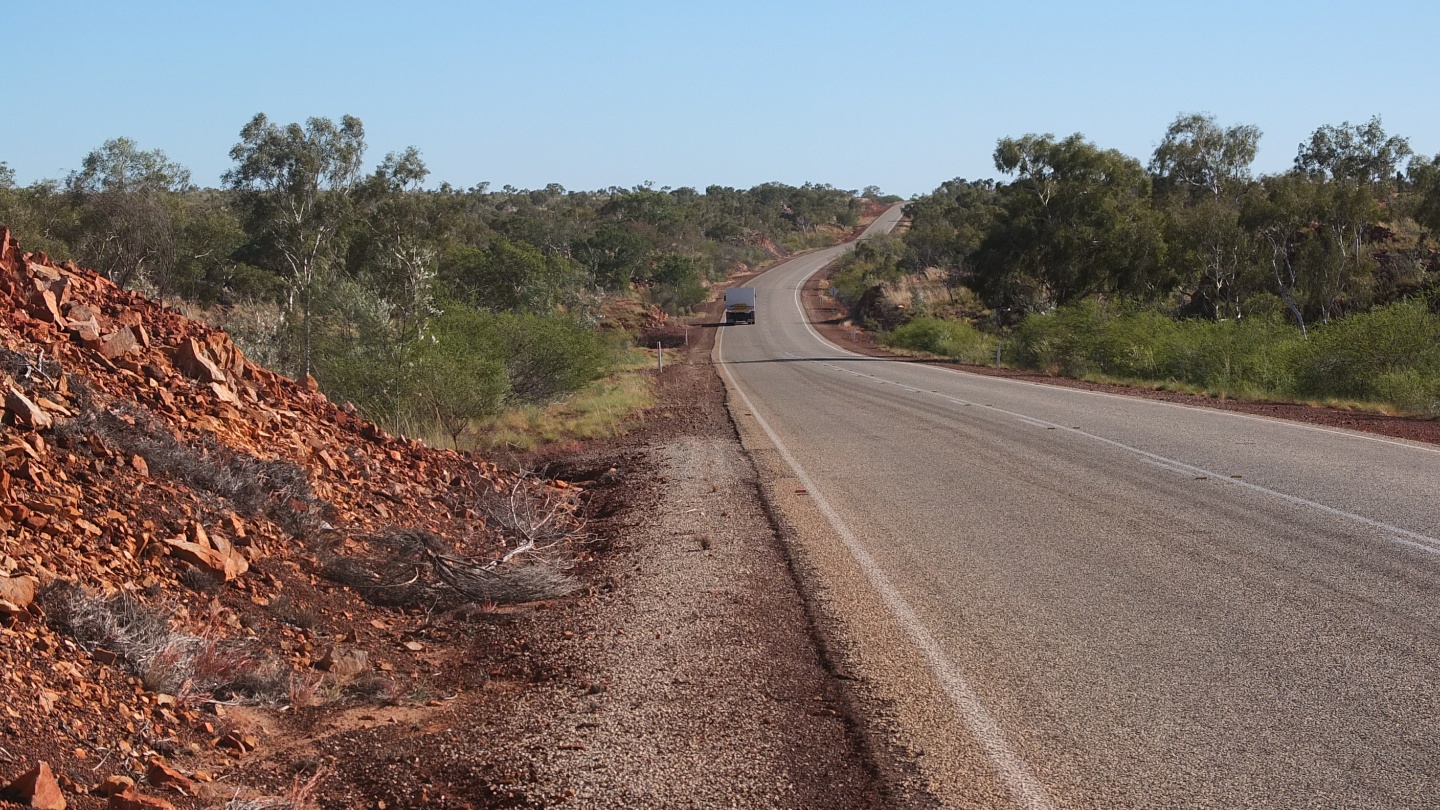 Finally the landscape is getting a bit hilly today.

Break time! Few minutes ago, a car coming from north did a U-turn a stopped close to me. Two friends, Woody and Joe, get out and proposed me some fresh water or fresh coke. I chose the coke for the sugar naturally ;-) Joe did cycle in Australia last year so when he saw me, he pull out of the road straight away. He told me a bit about the trip his has done between Broome and Perth. He asked his friend, Woody, to come with him but after 4 hours only the guy was done, exhausted haha. Joe’s wife think they are mad and offer them shirt on which it’s written “Crazy Bastard 1” and “Crazy Bastard 2”. Both of them are actually wearing that shirt and it’s pretty funny. Again, I heard about some other guys cycling towards Darwin like me. I’m not sure I will see them one day but it’s nice to hear from other cyclists! We wish to each other “safe travel” and they were gone :-) 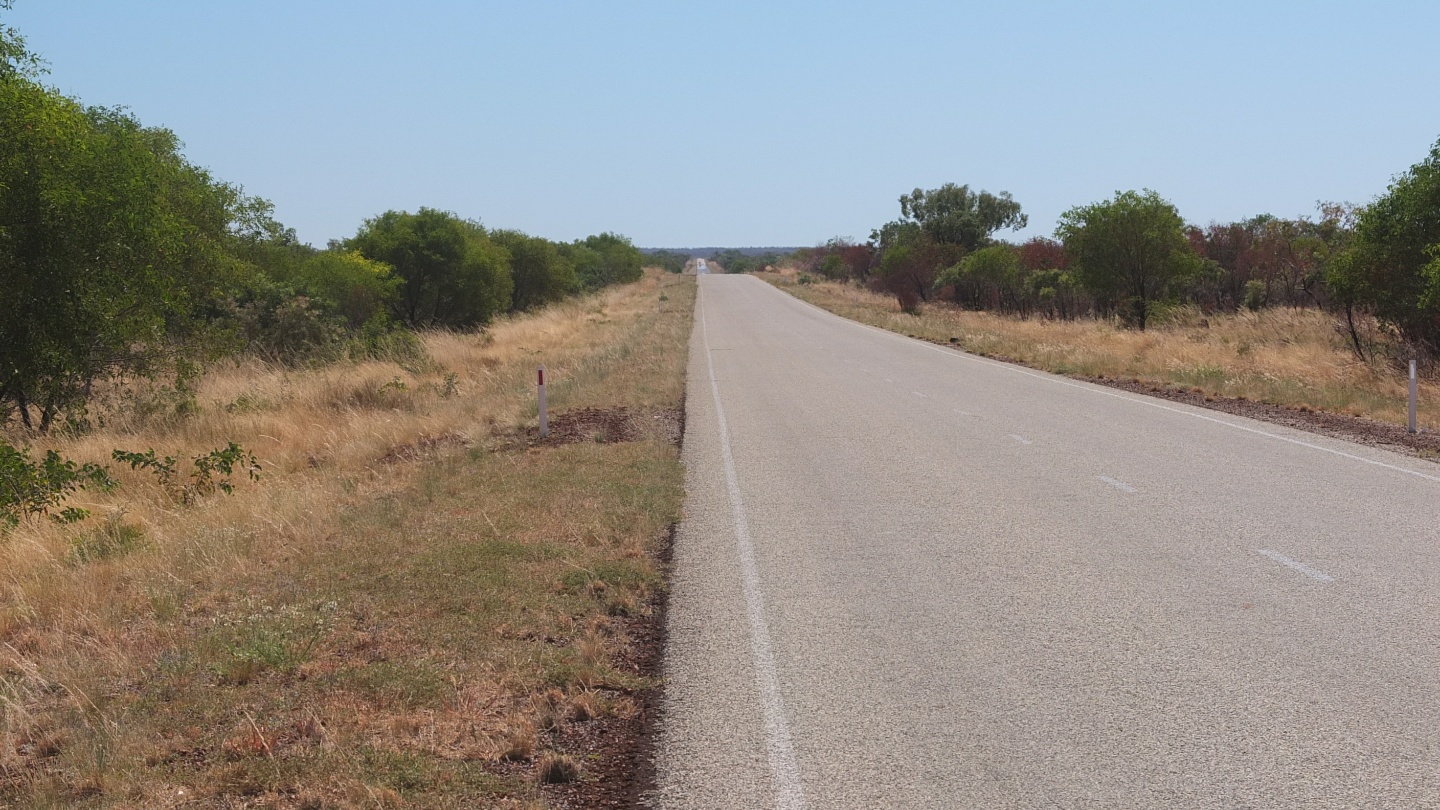 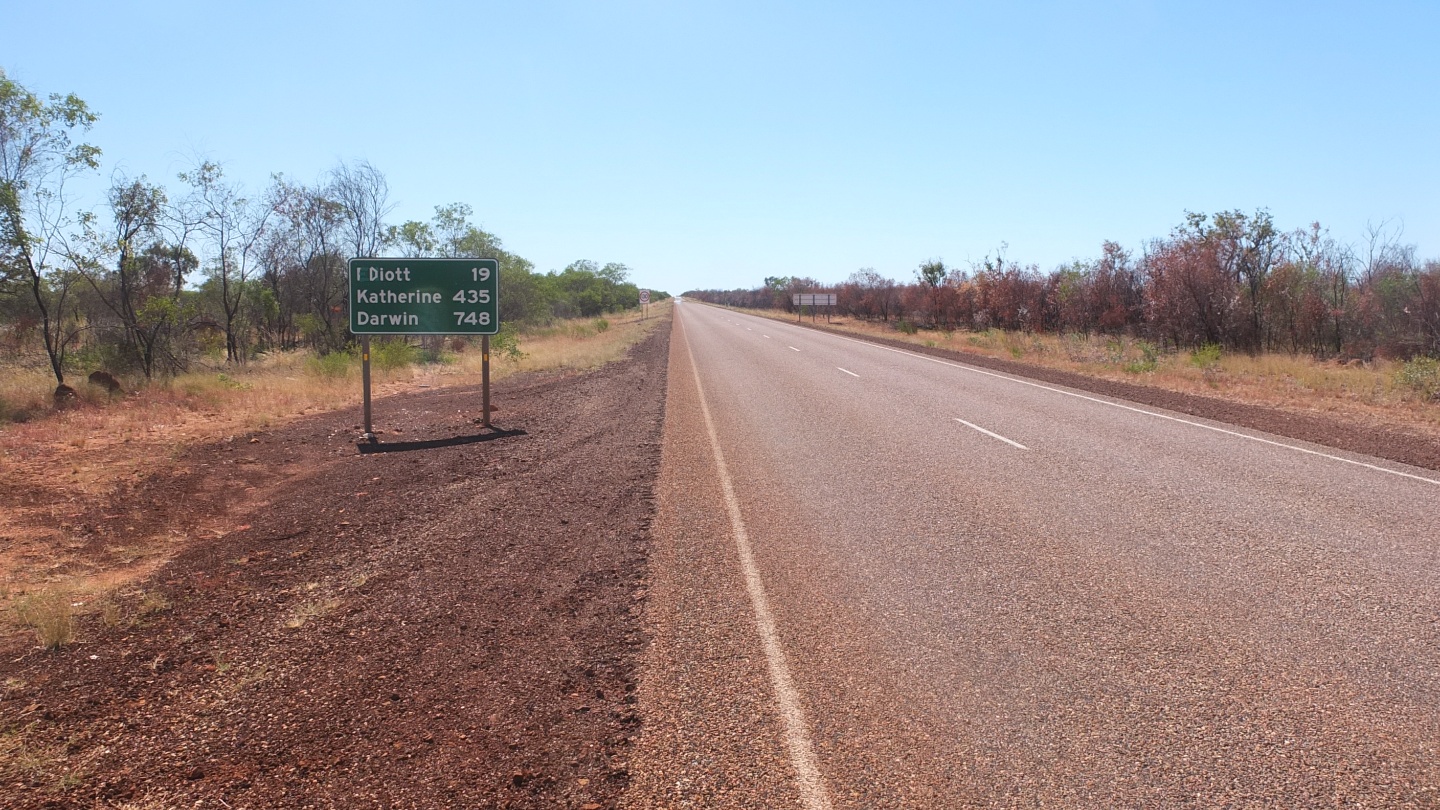 Elliot, 19km. I will stop there for a bit and then decide if I’m moving further or not. 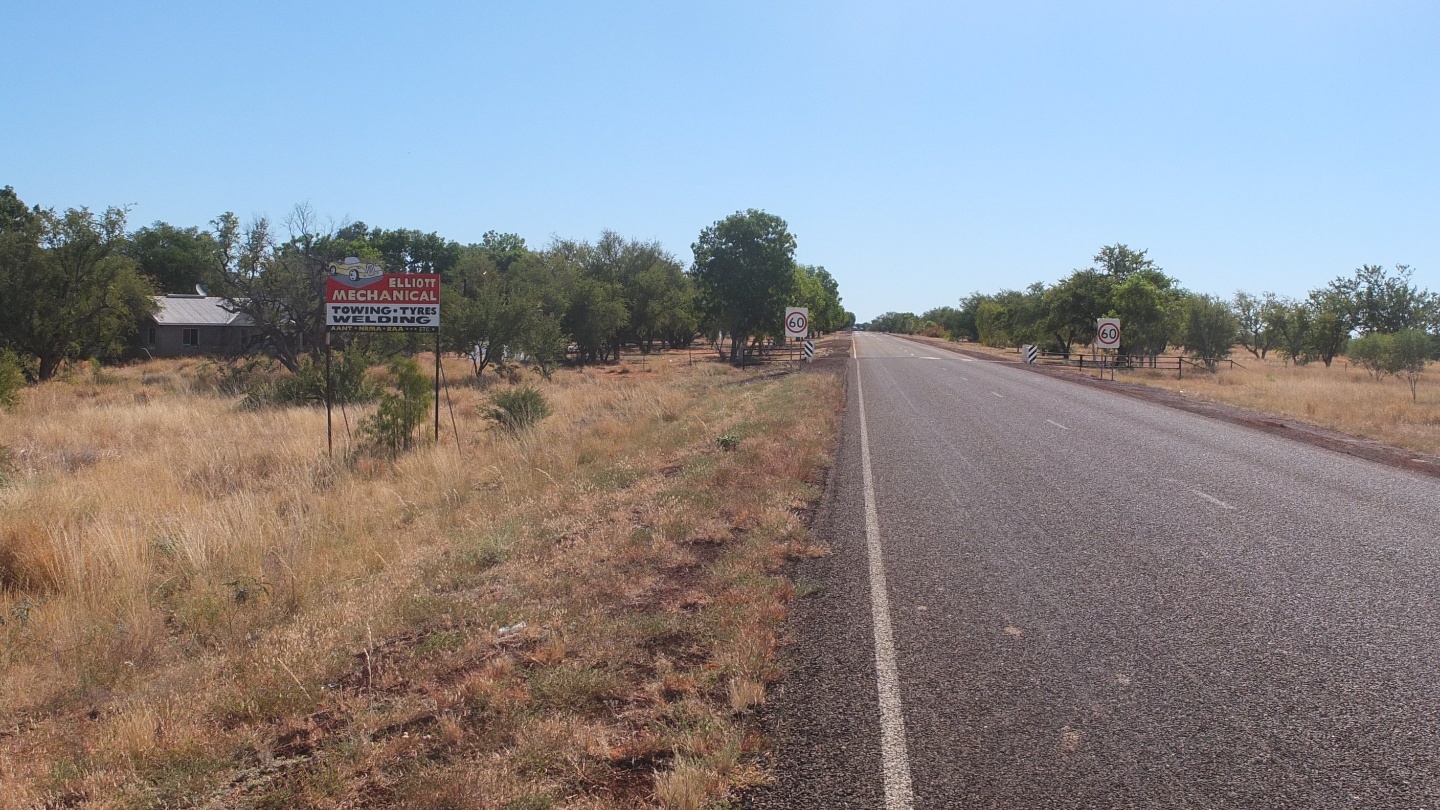 Getting very close. I’ve just met an English guy, cycling South! This guy had almost no gear as he decided to cycle when he arrived in Darwin. I don’t know where he was before, in Asia or somewhere else in Australia? He had a sleeping bag, some clothes, two big water bottles and few other stuff. Not even paniers to put his gear in. Everything was roughly fixed on the back rack of the bike. He told me that I was the first cyclist he met on the road when, usually he met cyclists in campsites. What?! He also told me he did not have a stove so he must buy food at each roadhouse which must be expensive! Crazy guy! He was in a kind of hurry when we met. In my case I’ve done 80km already. So our chat was short and we continued our way. 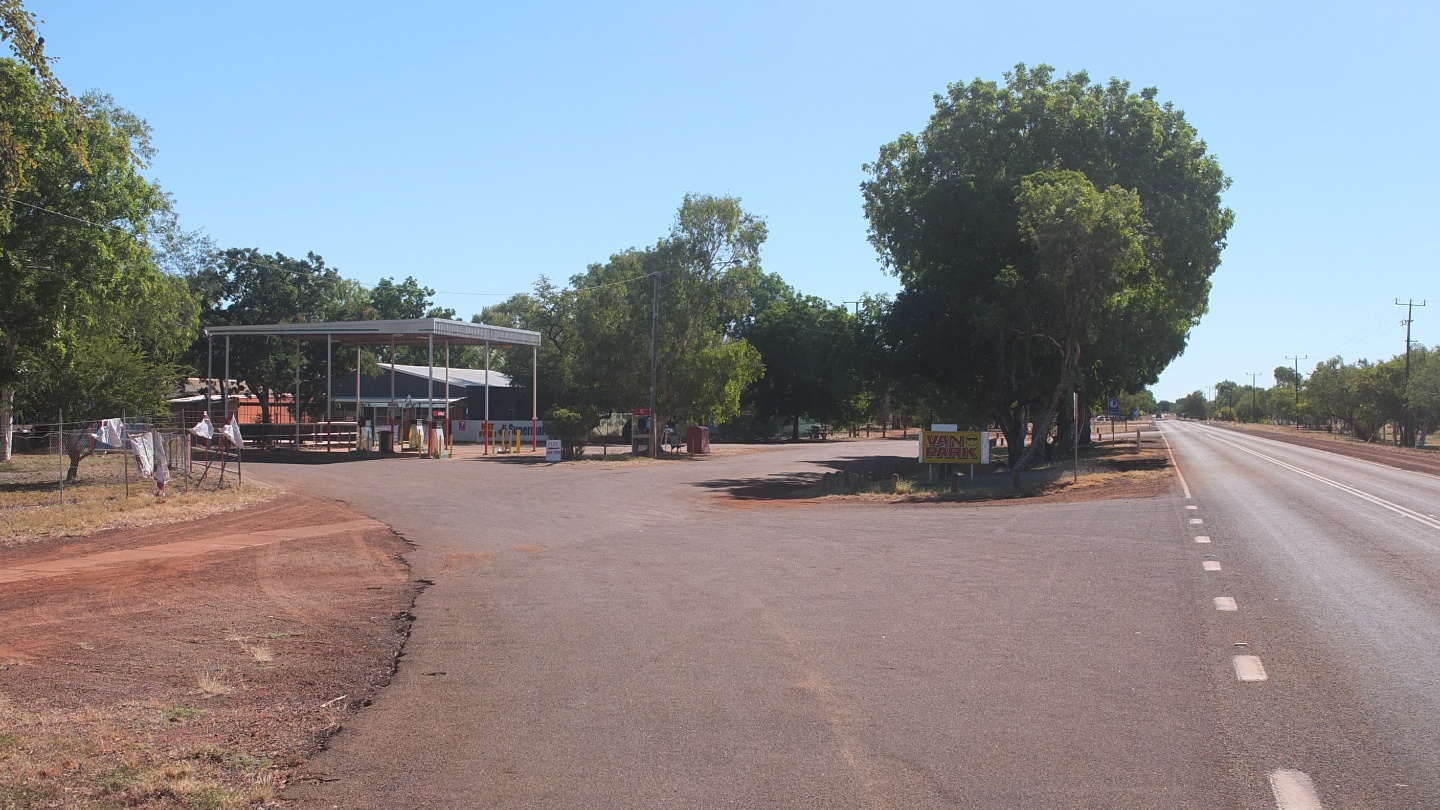 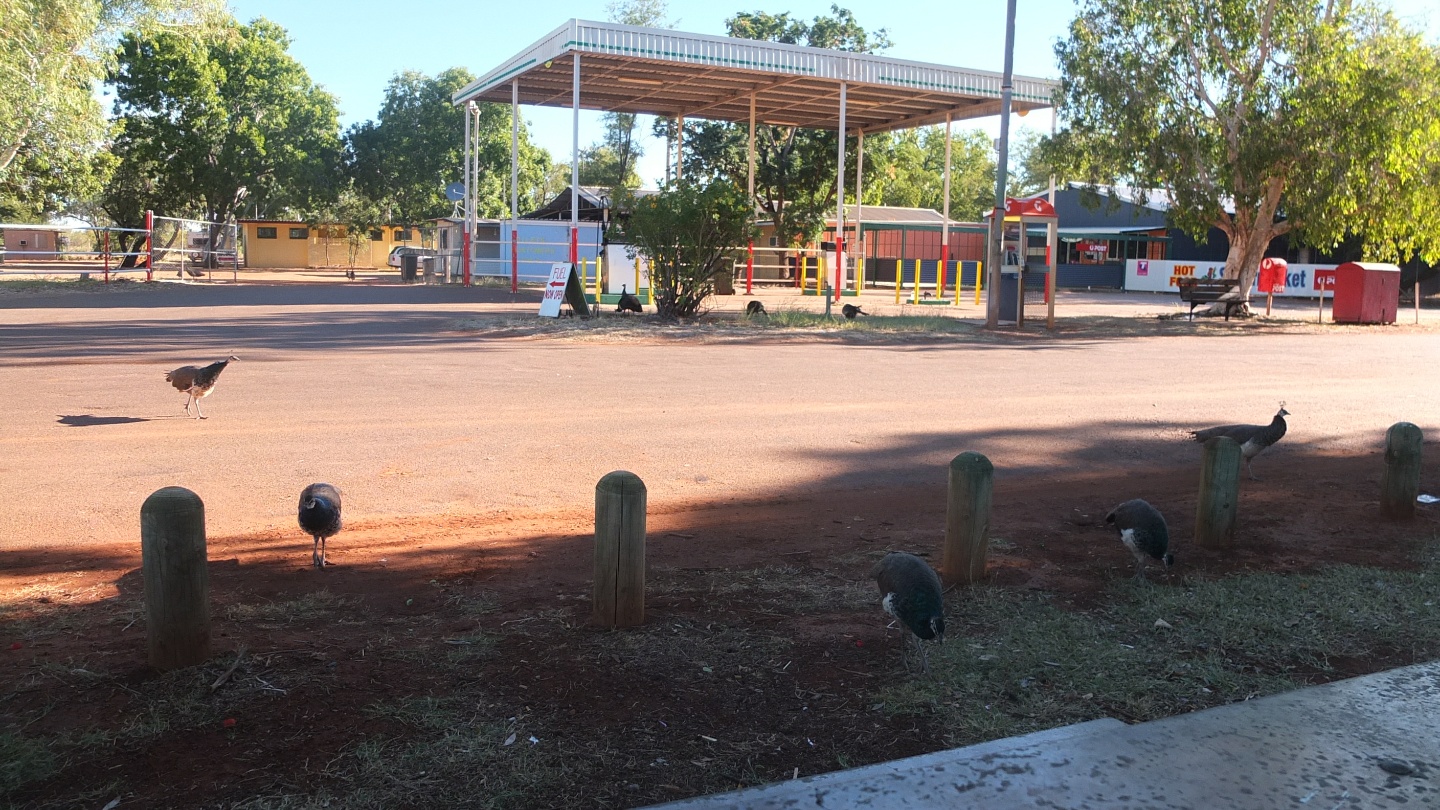 Glad I found a nice shady spot. This shot is so dear! I’m not hundred percent sure but I’ve seen a bottle of 2 litres of bad orange juice for… 14$40! What?! I’ve looked up and down to see if the price referred to something else but even that, anything around at that would be crazy expensive. In that case I always buy the smallest can of coke because the price is fixed everywhere or I buy an icecream for the same reason. 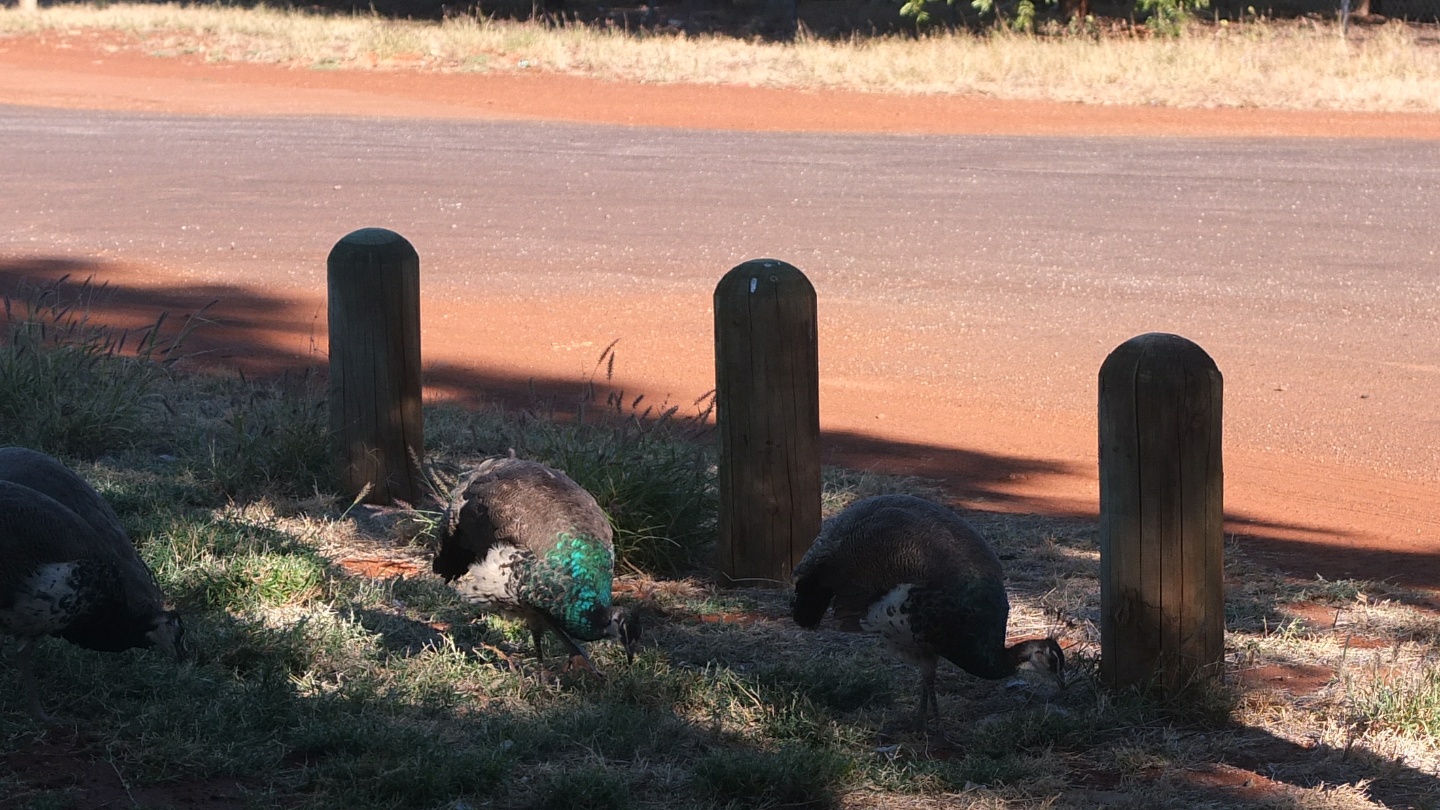 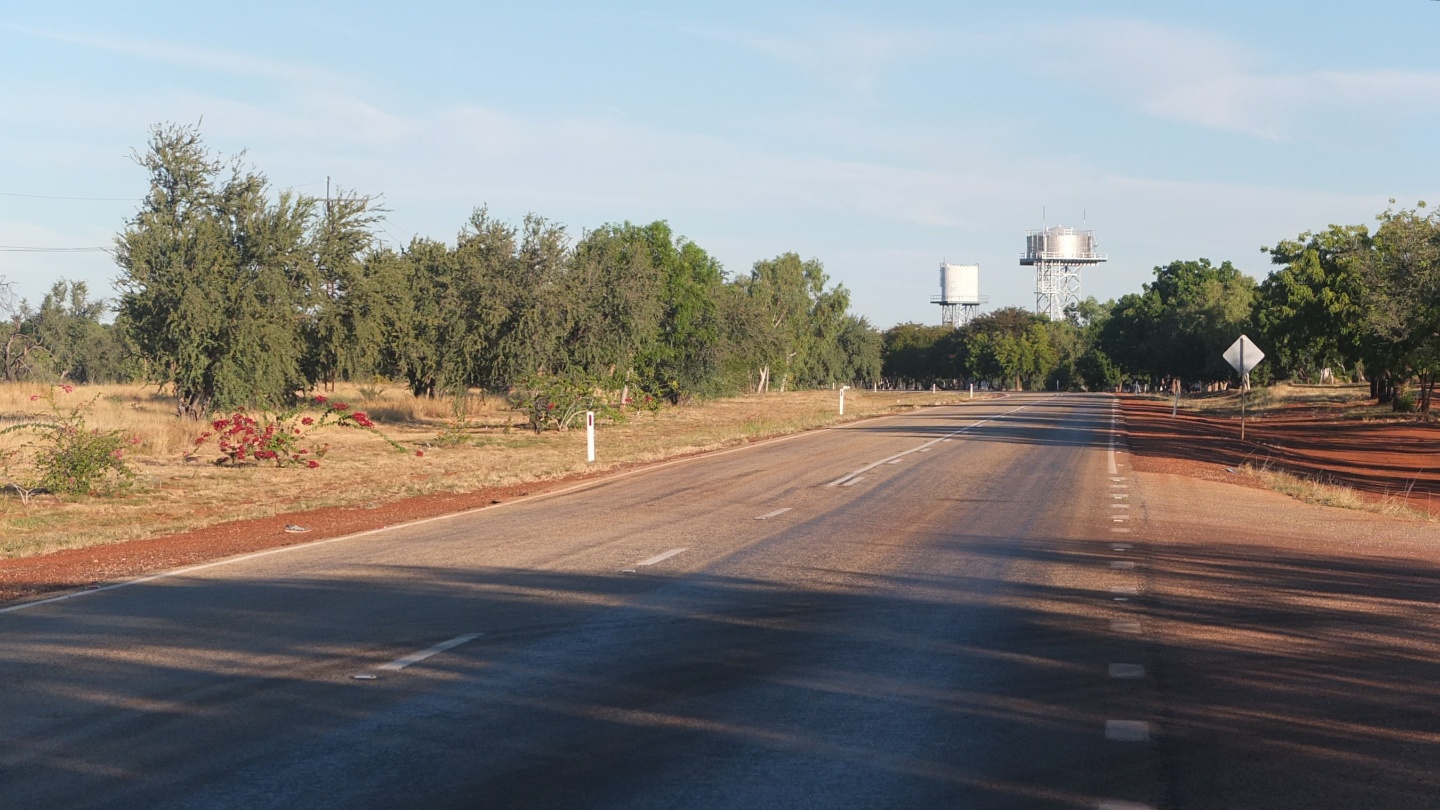 Finally, I’ve decided to push a bit further today. The English guy told me that there was a nice cheap campsite in Dunmarra, 100km from Elliot. I need a rest and that place sound good but I don’t want to do all of that distance tomorrow. This is why I’m back on the road! :-) 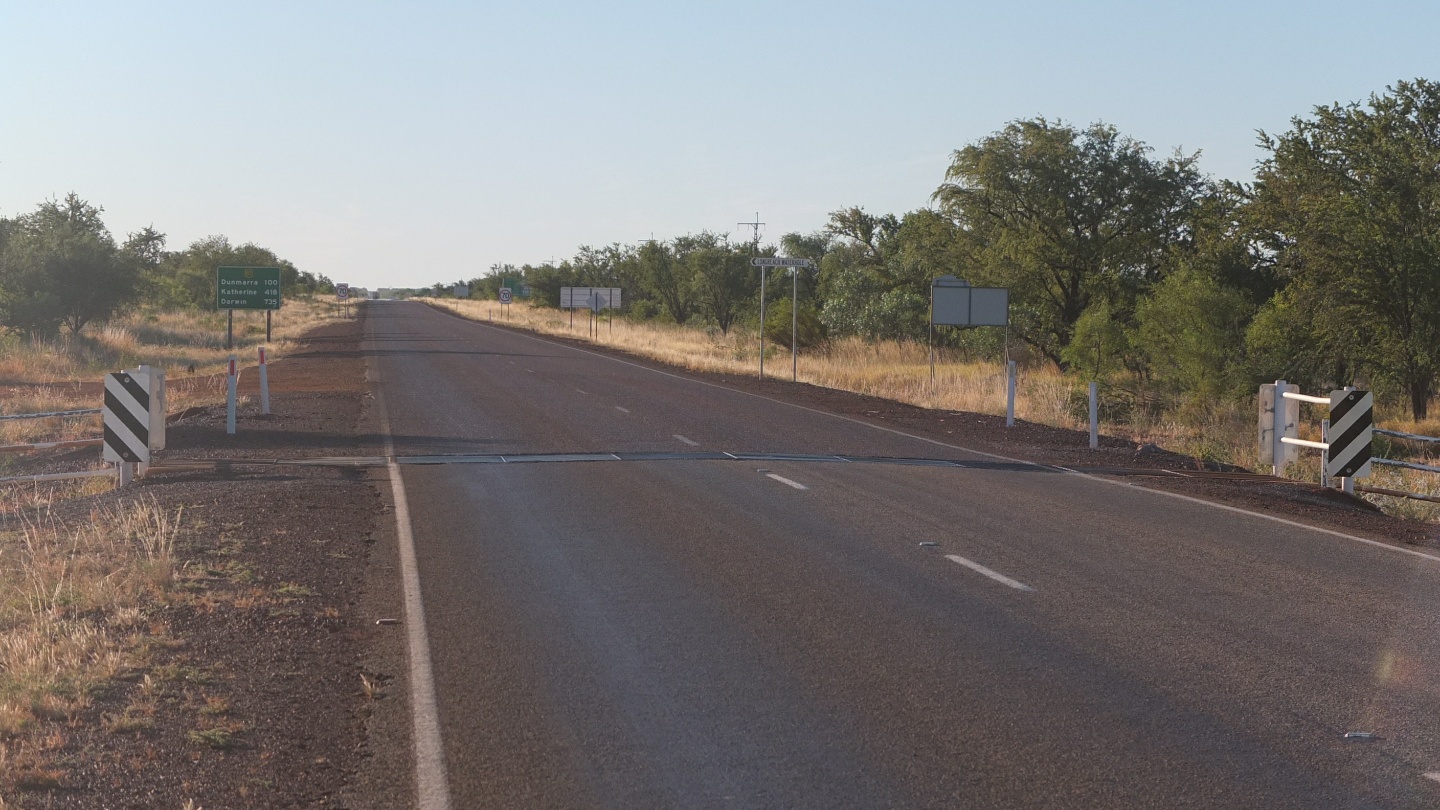 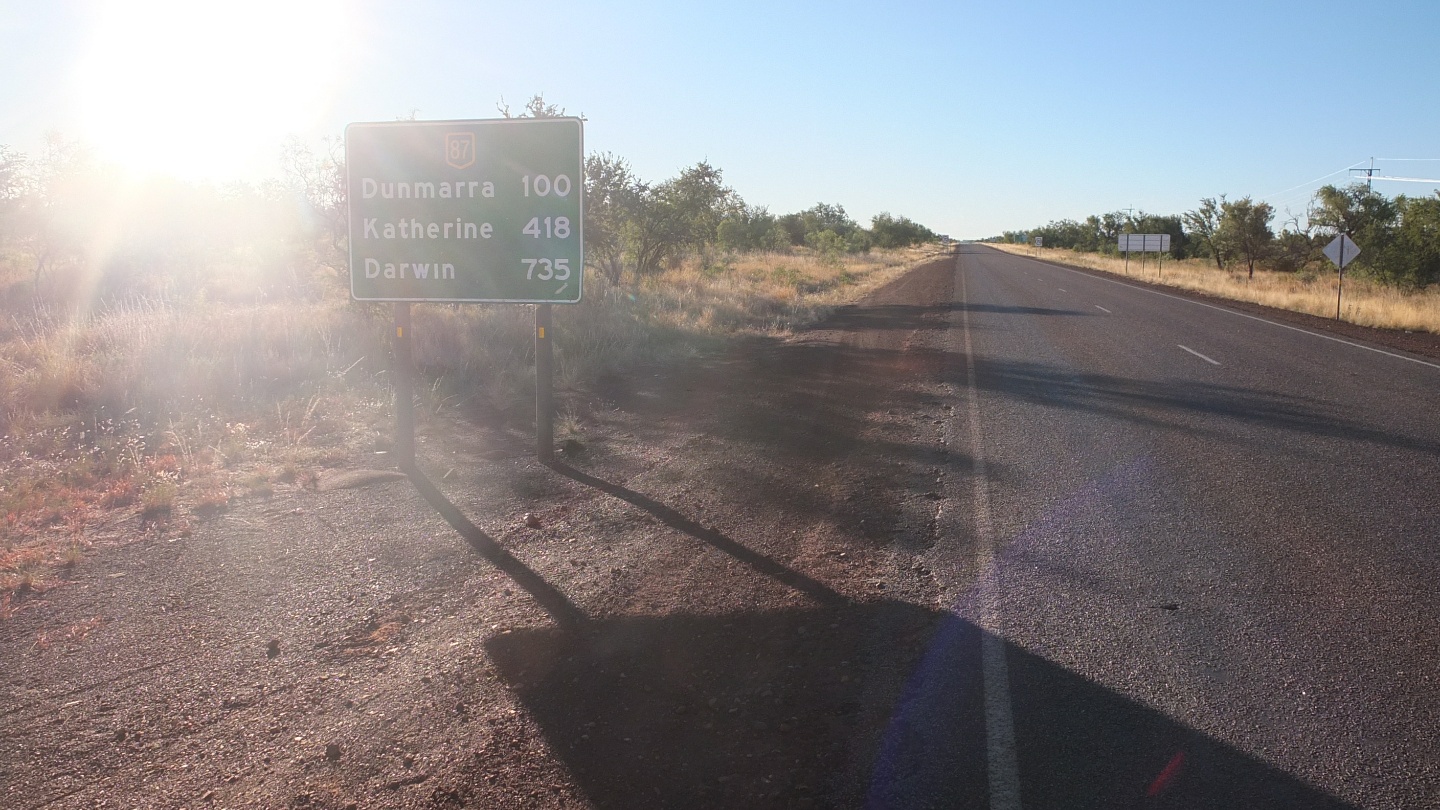 Yes, Dunmarra 100km. Would be good if I could do 15km or more before sunset. 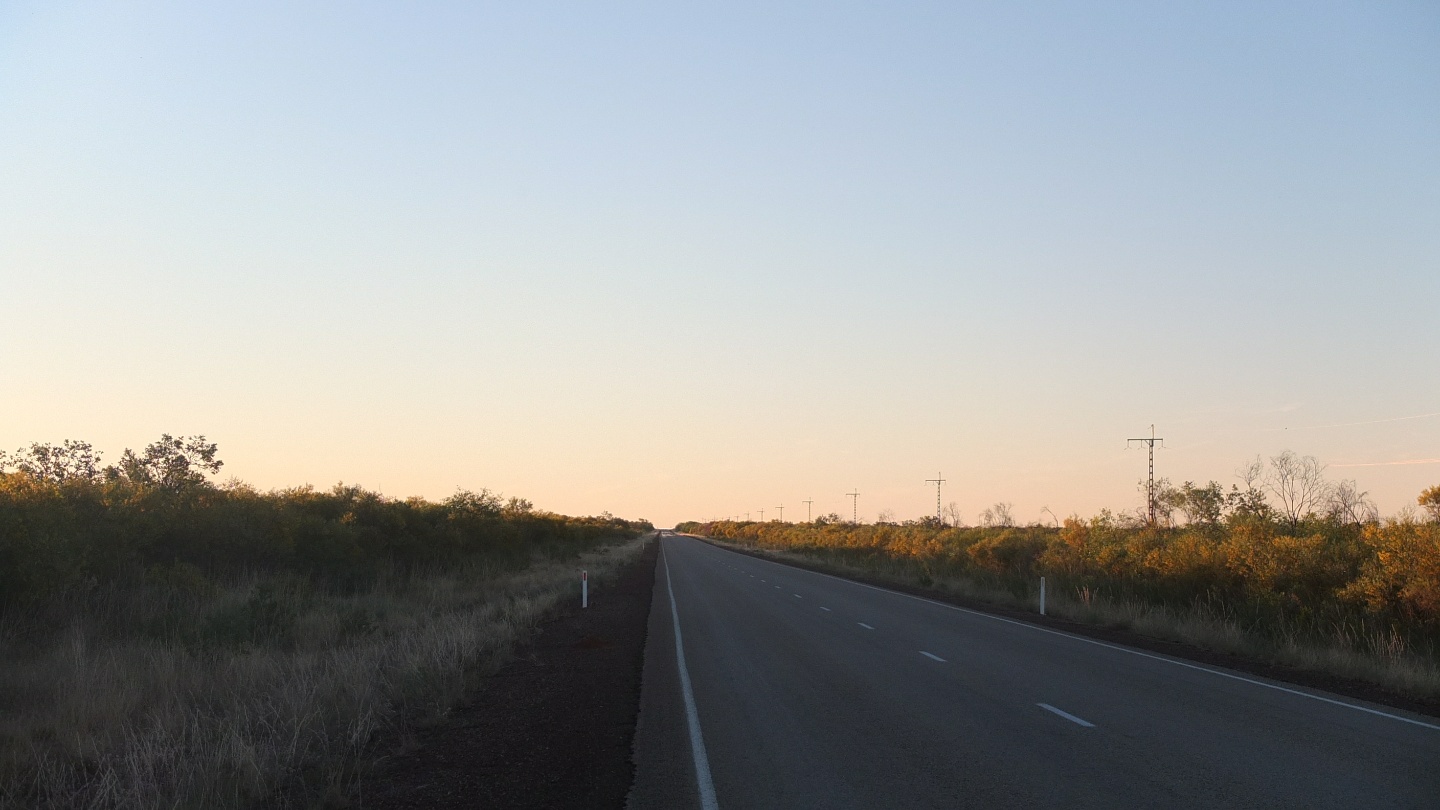 Rah, bloody road! I feel I’m only going uphill when it should be the opposite as I’m going to Darwin… What is that! 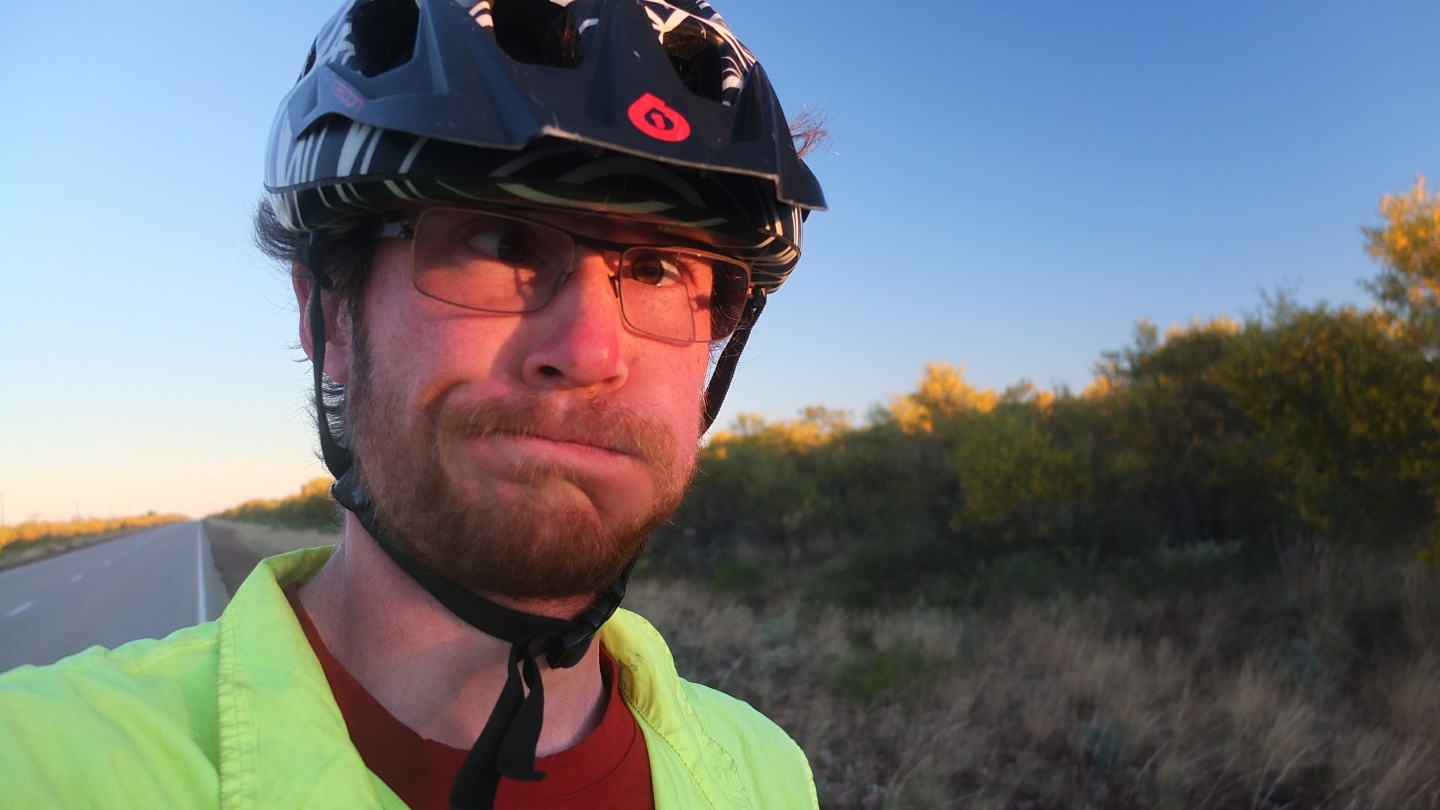 This road drives me crazy! 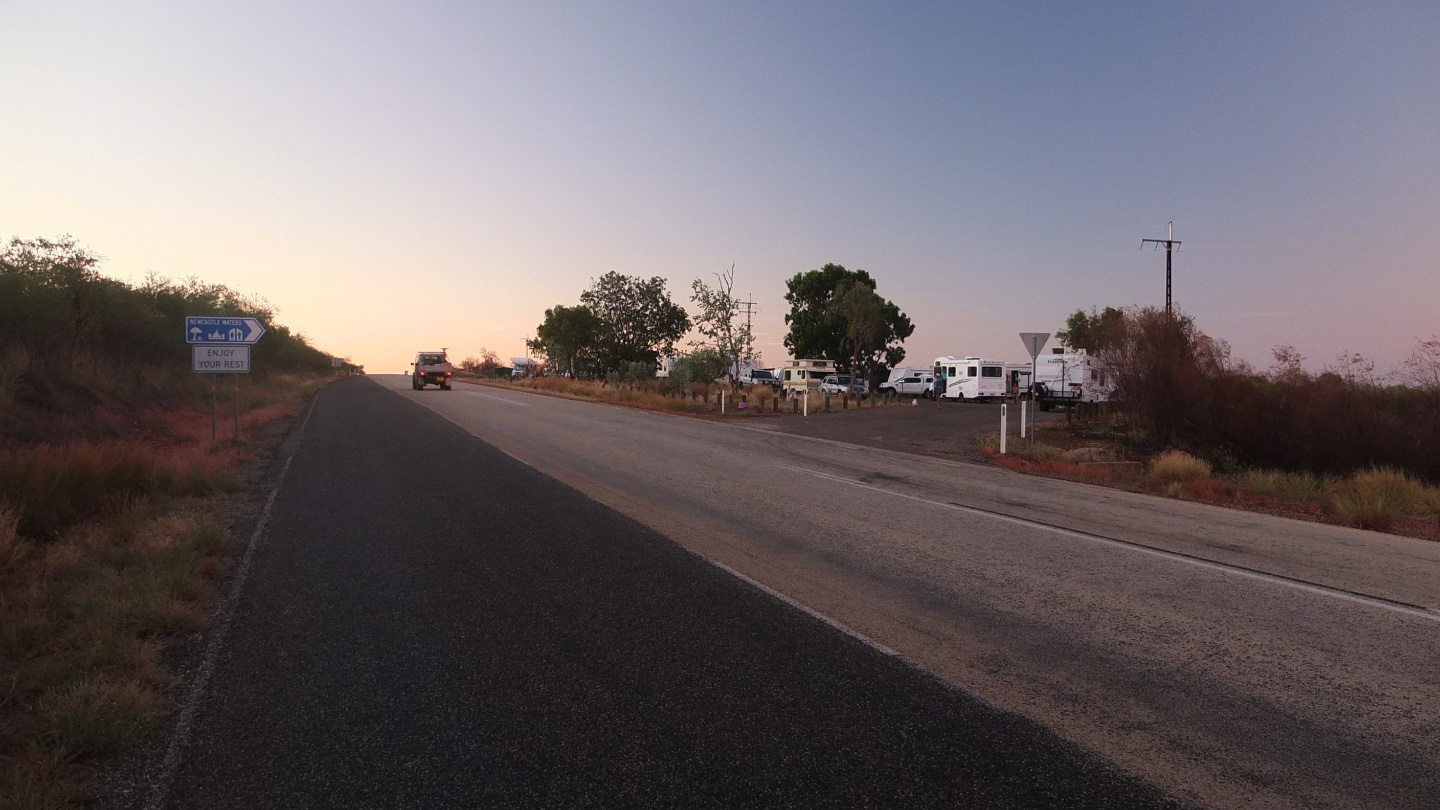 I’ve finally done 19km and reach a rest area :-) This is very cool! I think I will stay two nights if this one is better than “Attack creek rest area” which was really dirty. See ya!