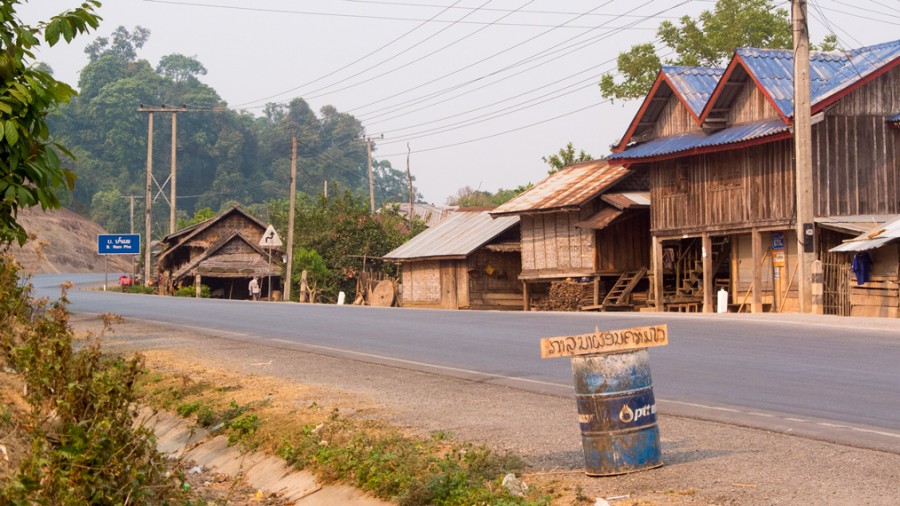 That second day in Laos is on the list of the toughest day I’ve done in my whole trip. The road is in very good conditions but most of the slopes have a 10% steepness (and sometimes more I’m sure). When the weather becomes hot it’s barely possible to push the bike. Fortunately, every uphill are following by nice downhills :-) Today I could observe with more details how Laos people live. Of course, their habitations doesn’t look as solid as Thailand but the people seem to live well. Especially the kids who say hello every time they see me and any cyclist I’m sure. Some of them run next to the road and raise their hands so we can do “high five” haha. 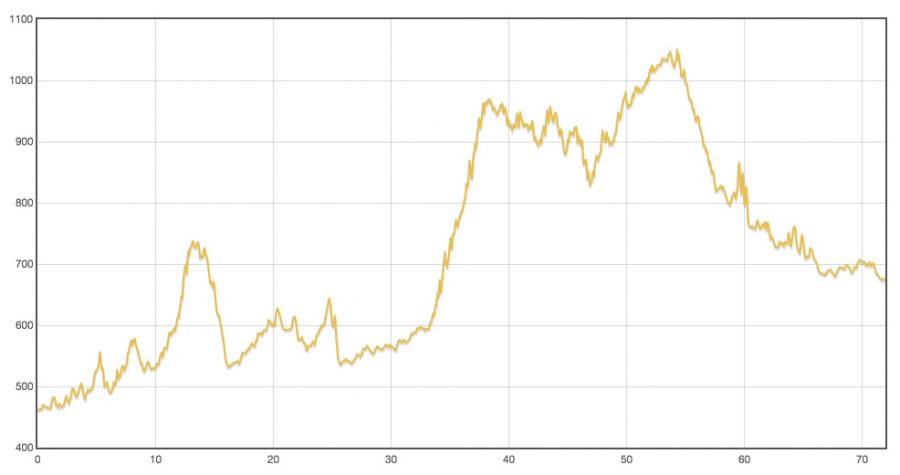 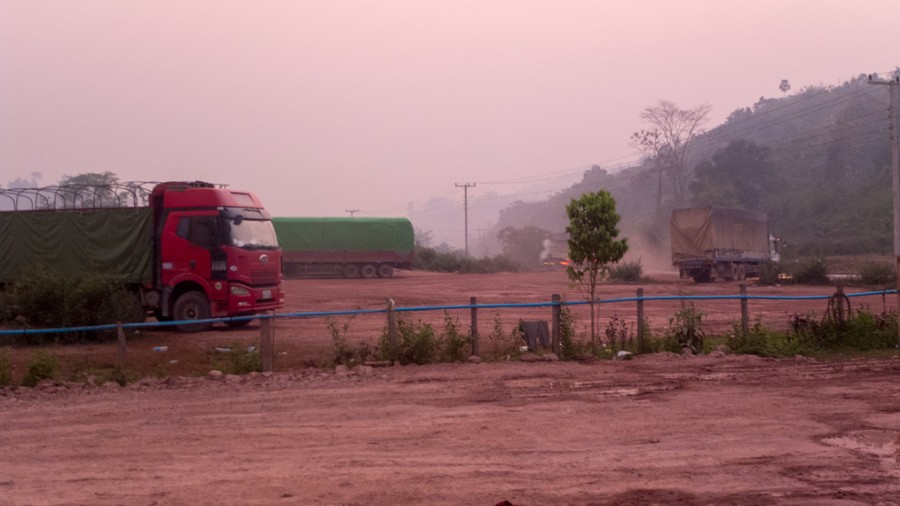 Back to this morning… I had a good night, very quiet. The truck driver are living earlier this morning. It tells moe that I should wake up even earlier than 5:45. 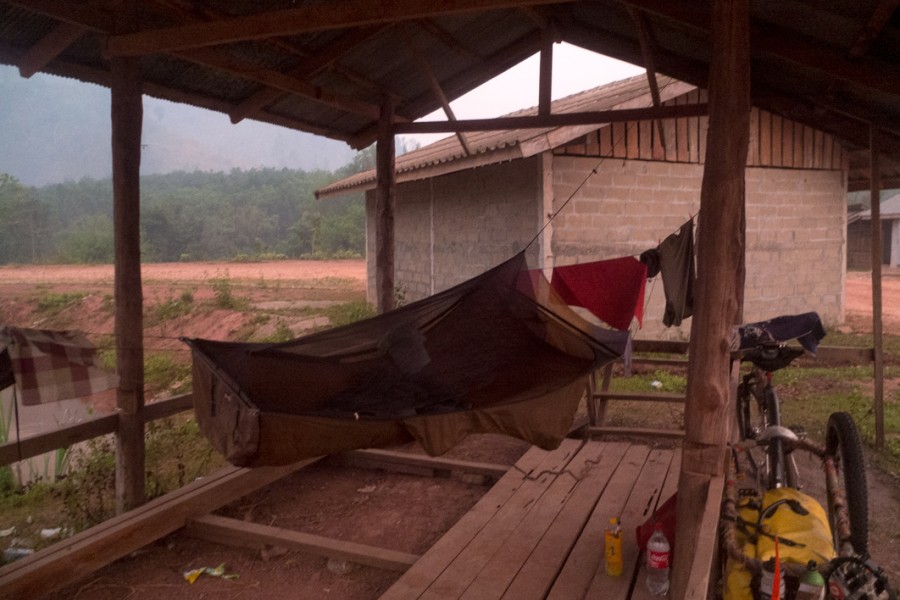 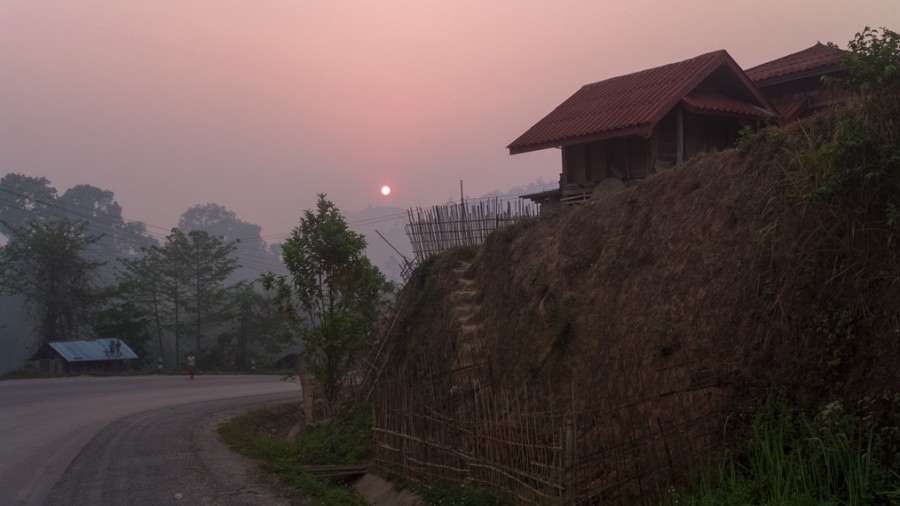 The sun is already above the mountains. It’s not very hot this morning. Chilly enough to cycle with a jumper. 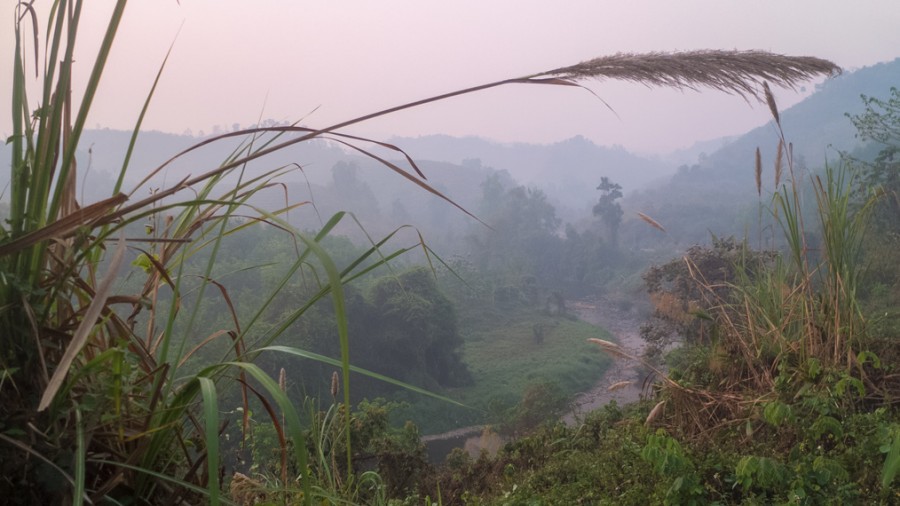 The view from the road down to the river. 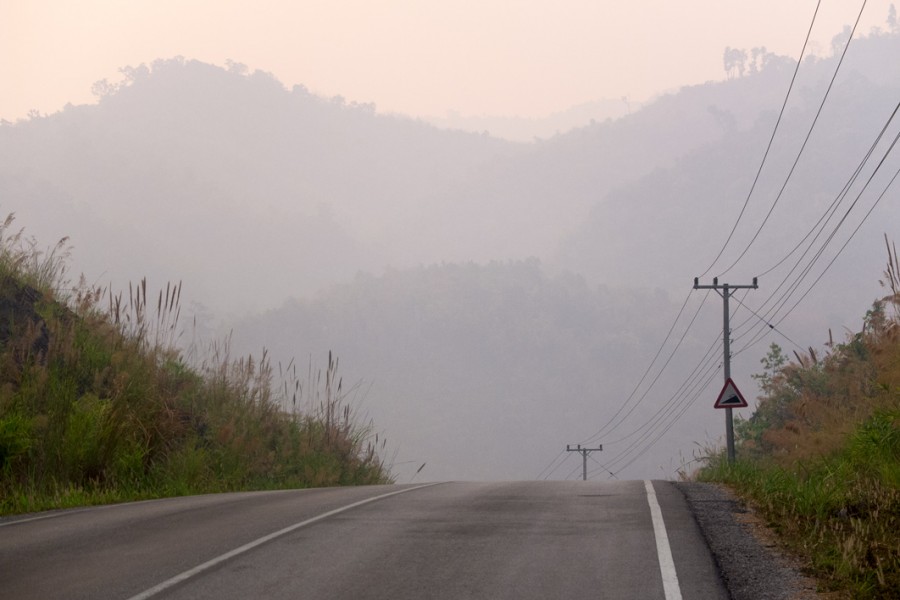 Once again, there is some steep hills I cannot tackle by pedaling. I’m nearly up to this one. Come on! 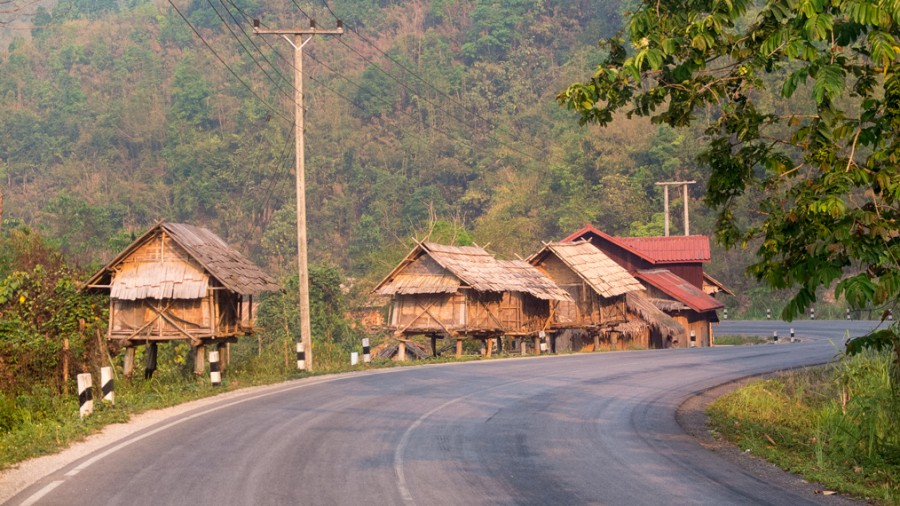 That’s where I come frome. There is plenty of tiny habitations along the road. 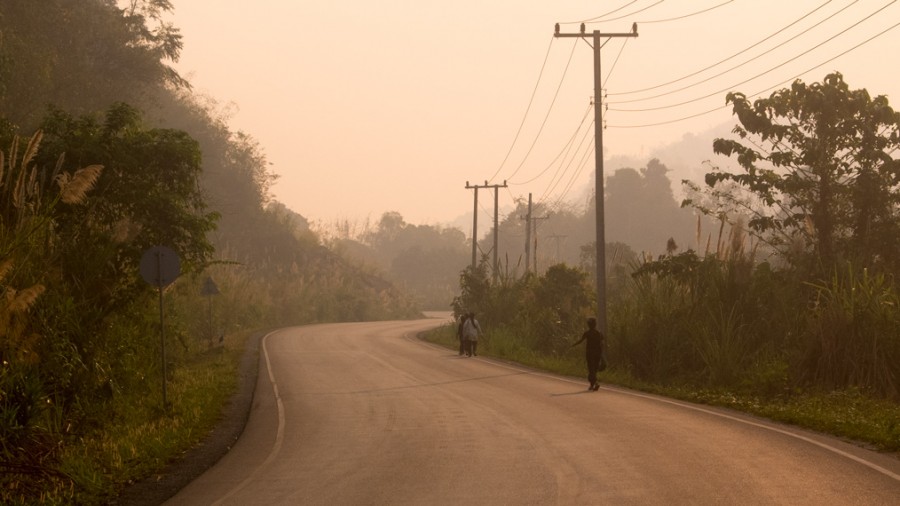 People are going to work apparently.

The biggest challenge of this morning was to find something to eat. First, I’ve seen what looked like a restaurant. I stopped and mimicked if I could get some food. I could see on the table 4 bowls with noodles inside. That was the base to make a soup or something I guess. The woman looked at me and say “no”. A boy came by, I mimicked “the same question” without any luck. Nobody wanted to give me food… I cycled a bit further and found another supposed restaurant. Same result, nobody wants to sell me food. What’s going on here? Finally few metres later, I saw someone eating a soup around a table. This time, don’t tell me I cannot eat because I would feel angry. The owner nearly invited me before I had the time to order anything. A minute later I sat around a table and a woman served me a soup with a very small amount of rice noodle, few piece of meat (well I thought it was meat) and some chopped cabbage. The soup tasted a bit weird (like dirt) and I was not very confident about the cleanness of the water they used to make it. I’ve avoid the meat, ate the rest quickly and left the place. The man was very nice and invited me to come back here one day. Thanks but that’s not really my way for now. Bye!
I will have to eat something else very soon because I’m still starving. 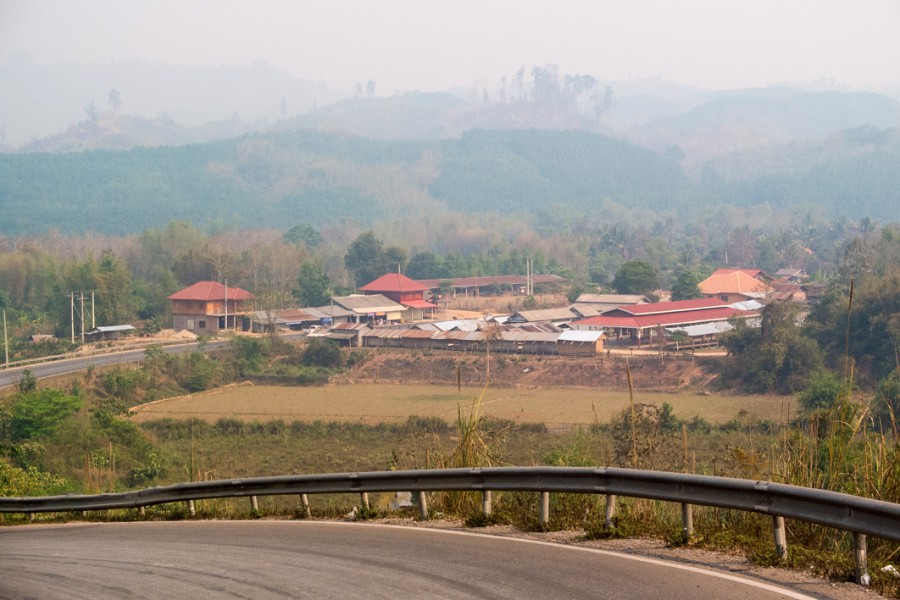 Maps shows me that there is a market there, front of me. It would be nice if I could buy some veggies and make my own food. I don’t know if I can trust Laos food for now. I’ve been sick one time and that’s enough. Let’s be careful. 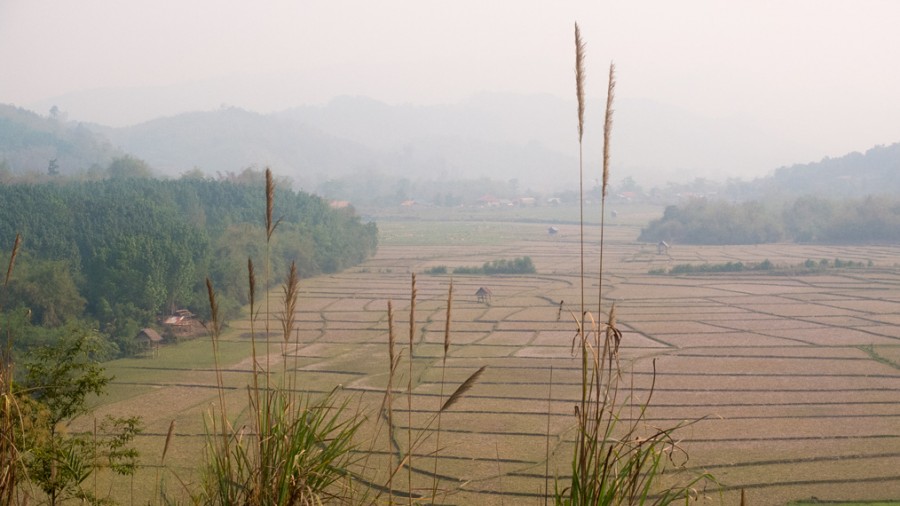 A closer look at the fields which look very organised. 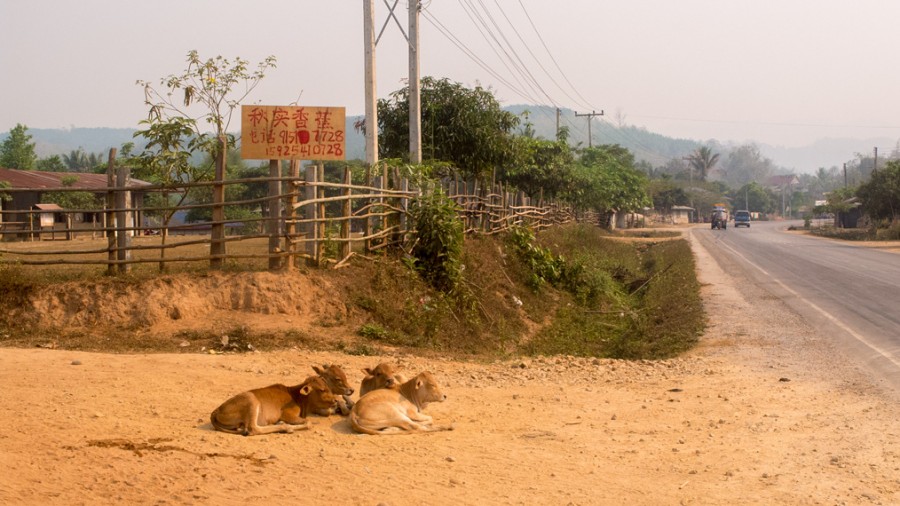 I’ve passed front of the market. It was closed. On the right side of the road there is a little shop. I will buy some cookies or anything that look nice. 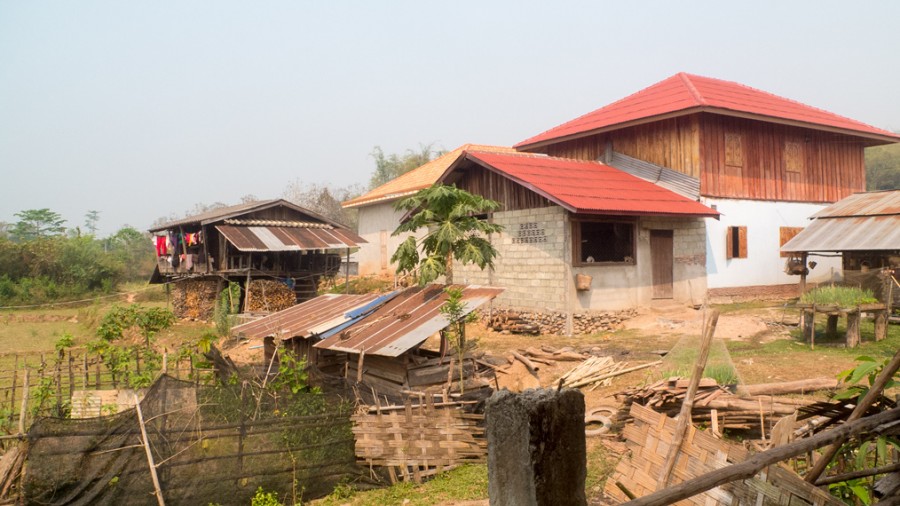 Haaa, I feel better now :-) At the opposite side of this village I’ve found a petrol station with toilets so I’ve topup my water. I’m getting organised again :-) 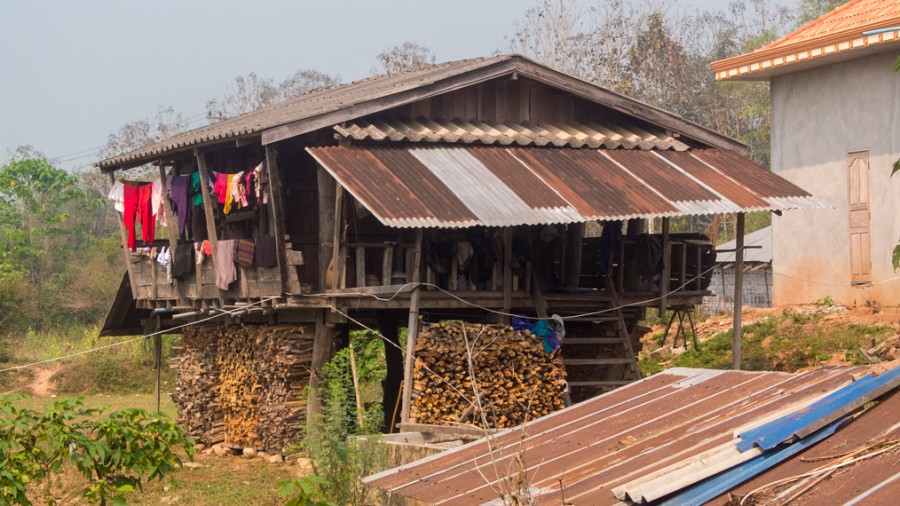 Regarding the amount I guess Laos people use this wood for cooking. It’s not that cold now and I’m not sure it will become anytime soon. Is that a typical Loas house? That’s one style at least. 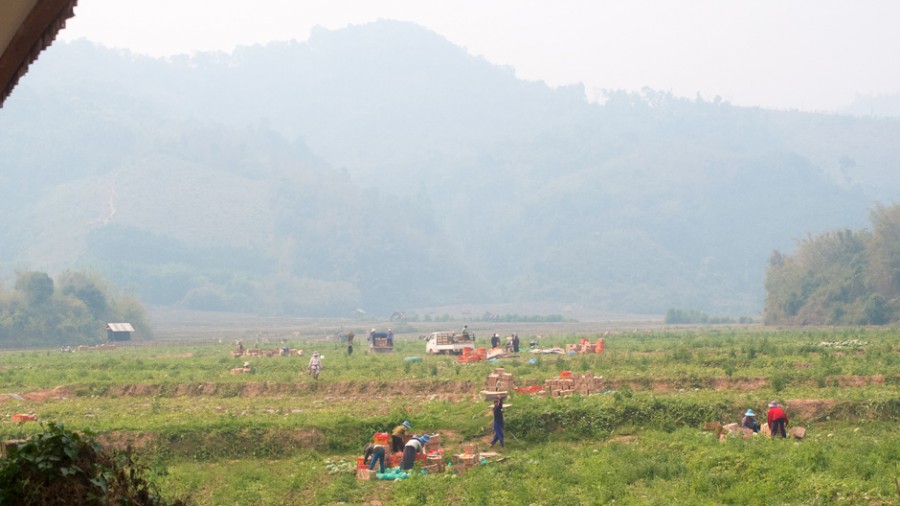 There is something going on there. 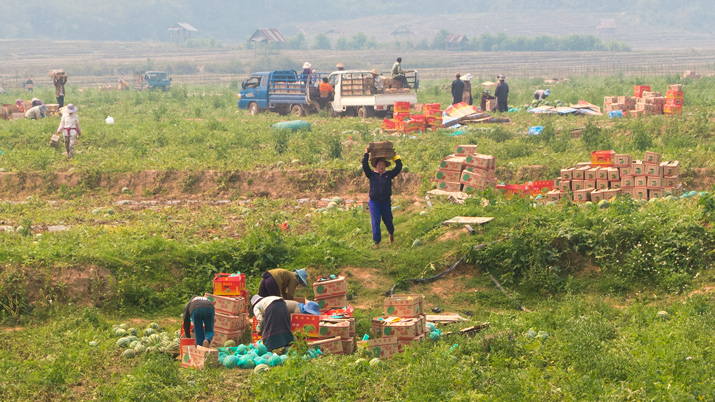 The farmers are collecting watermelons, a lot of them.

Now, I hesitate between two things. I know I have a long climb front of me so I could stay here until 3 or 4 pm and do it later this afternoon or I leave now (10:30am) and I will stop somewhere in the middle when it gets too hot. I think I prefer the second solution.

Once again, and I knew it, the road was steep. I could not see the end… I’ve walked for a long time, stopped under shades when I could. Around 12pm I had to stop. The only spot I could find under the shade was a water collector. At this time of the year I’m sure I would be safe :-) I tried to sleep for a while but around 2pm the sun found me. I did not have much choice than to continue the road so I kept on walking up the hill and cycled when I could.

Finally I’m on the top! Few! that was intense. There is a view point here apparently. Let’s have a look. 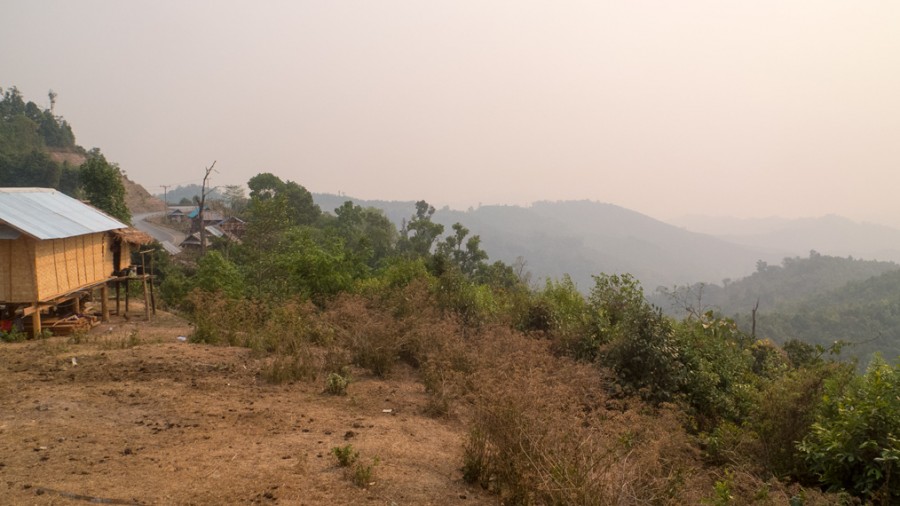 Wider view. I’m about 800m high. I wish I had my GPS to record the altitude and the road I’ve done today. That would be worth it :-) 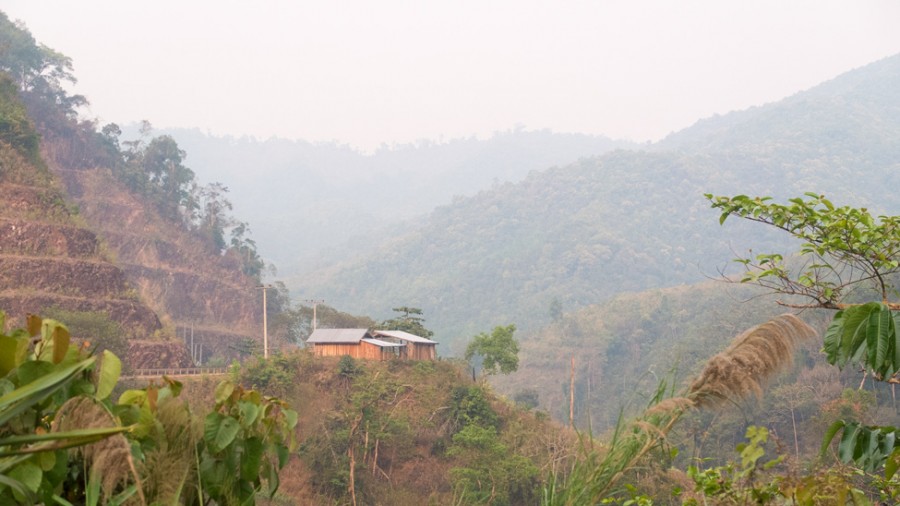 Oooh, the rest of the day is going to be happiness only :-) A looong downhill. 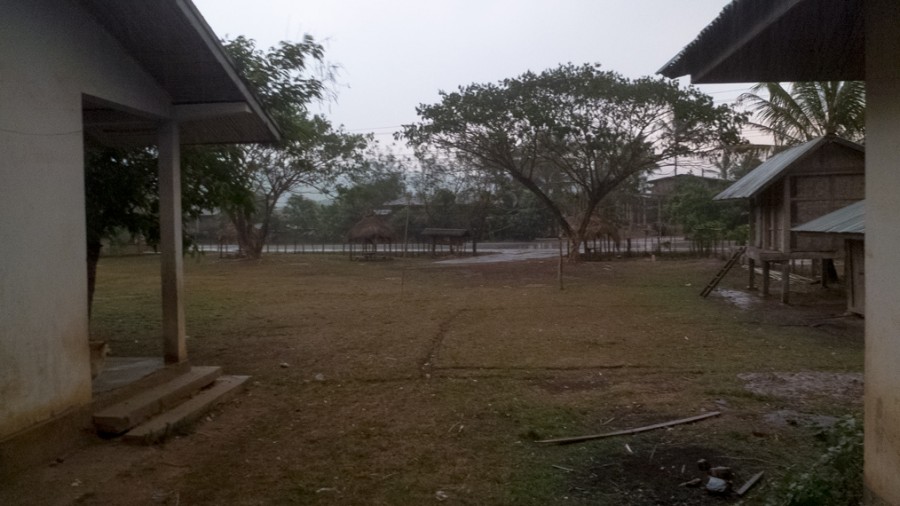 Late this afternoon, I’ve reached a town called Nam Fa. This place is squeezed between the mountains. First I bought some food because this is not as easy as Thailand to find some here. Then I started looking for a spot where to sleep tonight. I did not have to search very long. I found what looks like a school and at the same time saw a guy walking towards it. I’ve asked if I could sleep in the area and he said: “yes, yes, come with me”. Five minutes later, a strong wind shaked the town and less than a minute later, it was pissing rain. I’m VERY lucky I must say. 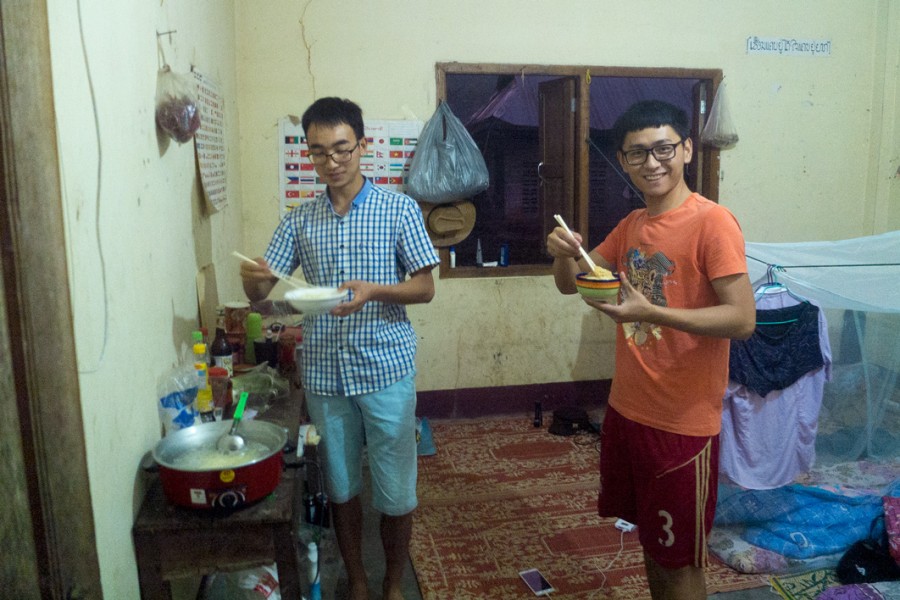 This is how I met Chiang and Tang. They are Chinese students who are staying 4 months in Laos to teach Chinese at school. They have been here for three weeks now. They live in that small room, have toilets outside behind this building. When I said I was going to Luang Namtha where I will stay for a week or more, they told me they will be there this weekend for the Laos New Year. I might see them again then :-) In fact, twenty of them are dispatched in the area. And all of them are teaching chinese to Laos students. When you look at the map, you can see that the China’s border is not very far. The influence must be quite strong here.

We spent a good evening together. Chiang and Tang don’t speak very well english but we could understand each other just enough. When I arrived, I’ve asked how I could cook dinner because I was starving but they offered to cook for us. At the end of this day, I was more than full. Thanks guys! After this tough day, I can only appreciate :-)

Good night and see you tomorrow!