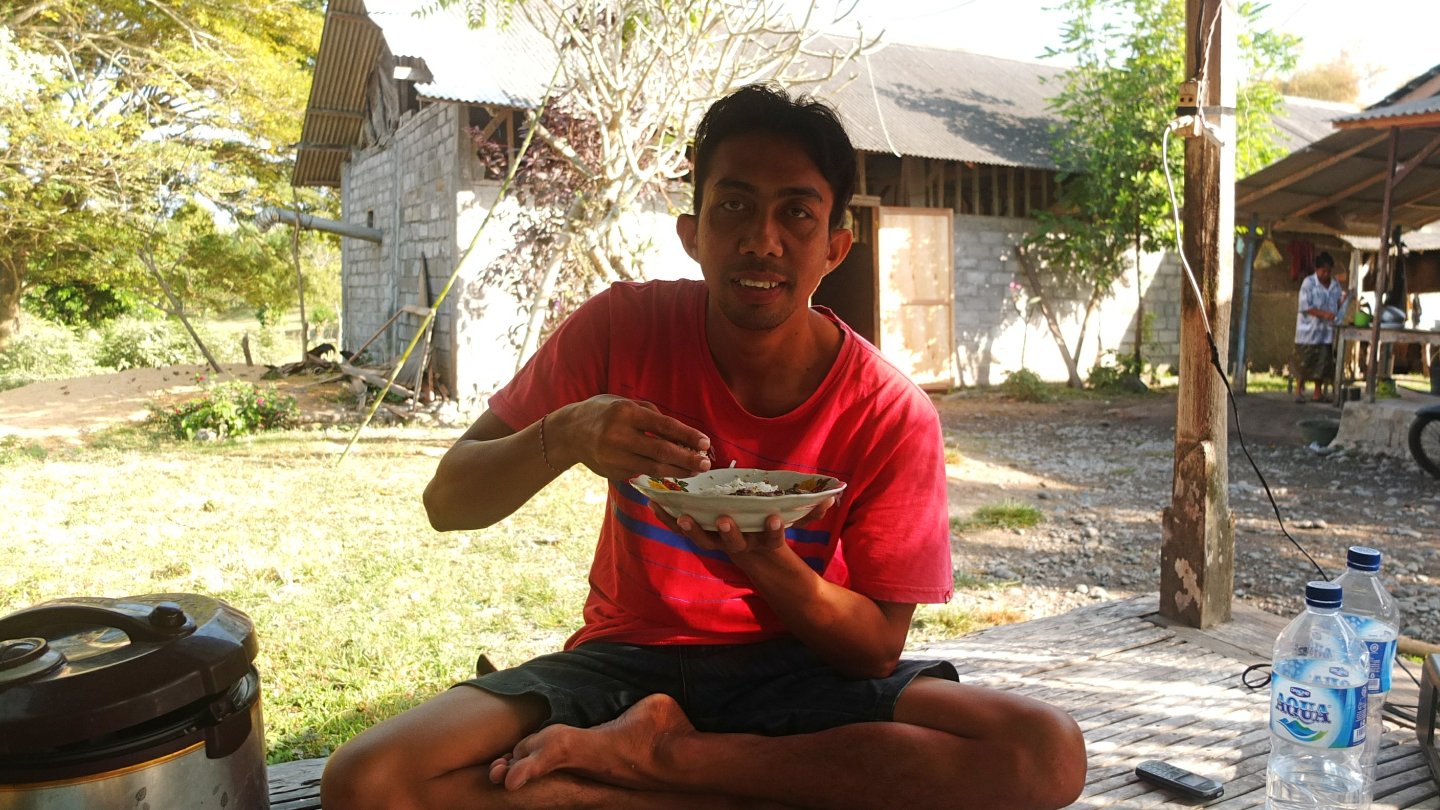 Selamat Pagi (good morning), We had a short sleep last night with Putu. I’ve used my mattress onto the bamboo floor but Putu slept straight on. I’m not used to like him. The night was not cold at all and sleeping outside was largely doable. Today I hesitated about staying one more night or not. Yesterday Putu asked me if I wanted to see how to make a Penjor and his uncle told me that I should stay until the festival. Finally at 2pm I was gone. 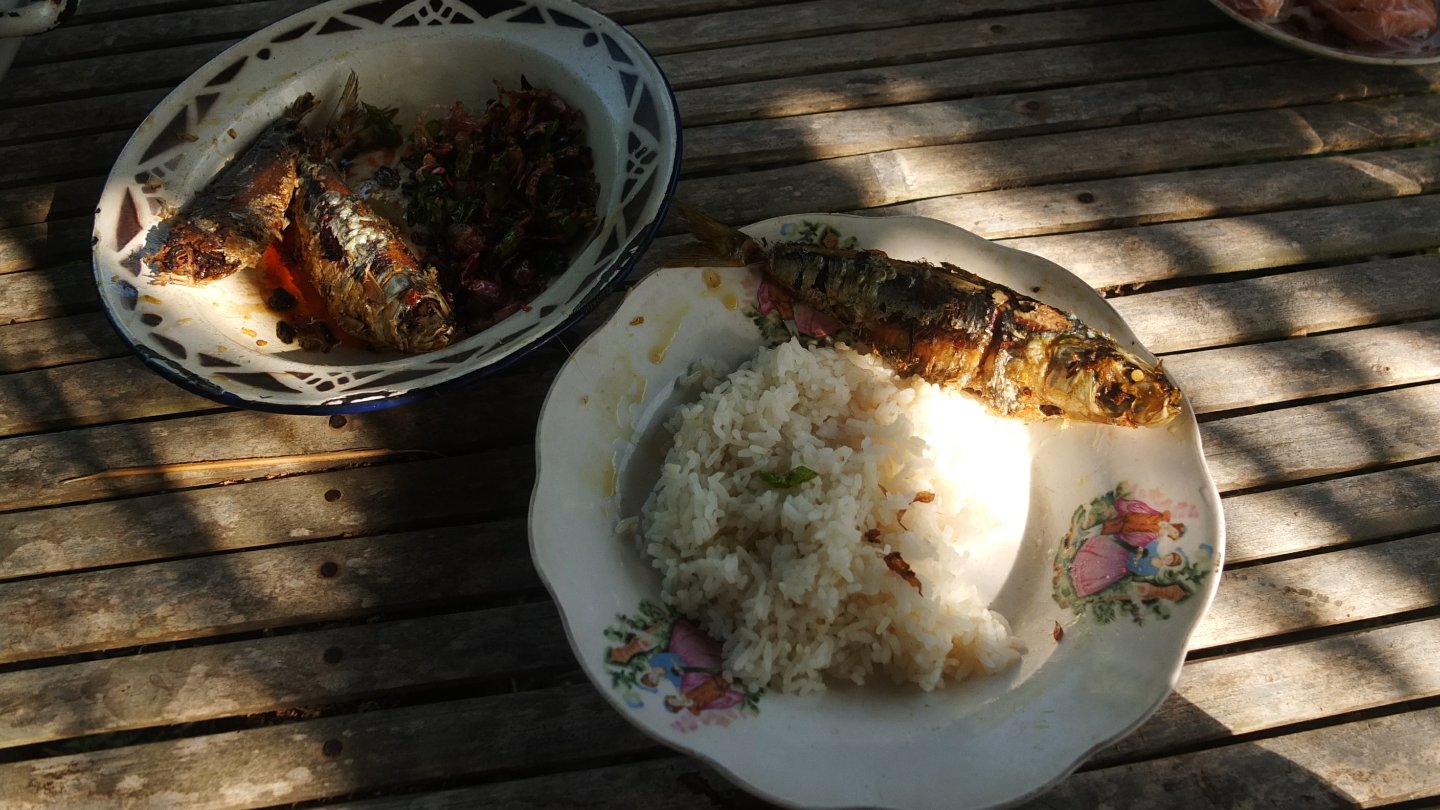 This morning we’ve started visiting his Grand’ma who live next door, probably 300m. Naturally we took the scooter to go there haha. His grand’ma served us breakfast: fried fish, rice and fried chili plus onions. It’s very good :-) They have plenty animals including their rice factory. Chicken, pigs, dogs, cats and maybe some I dis notre see. 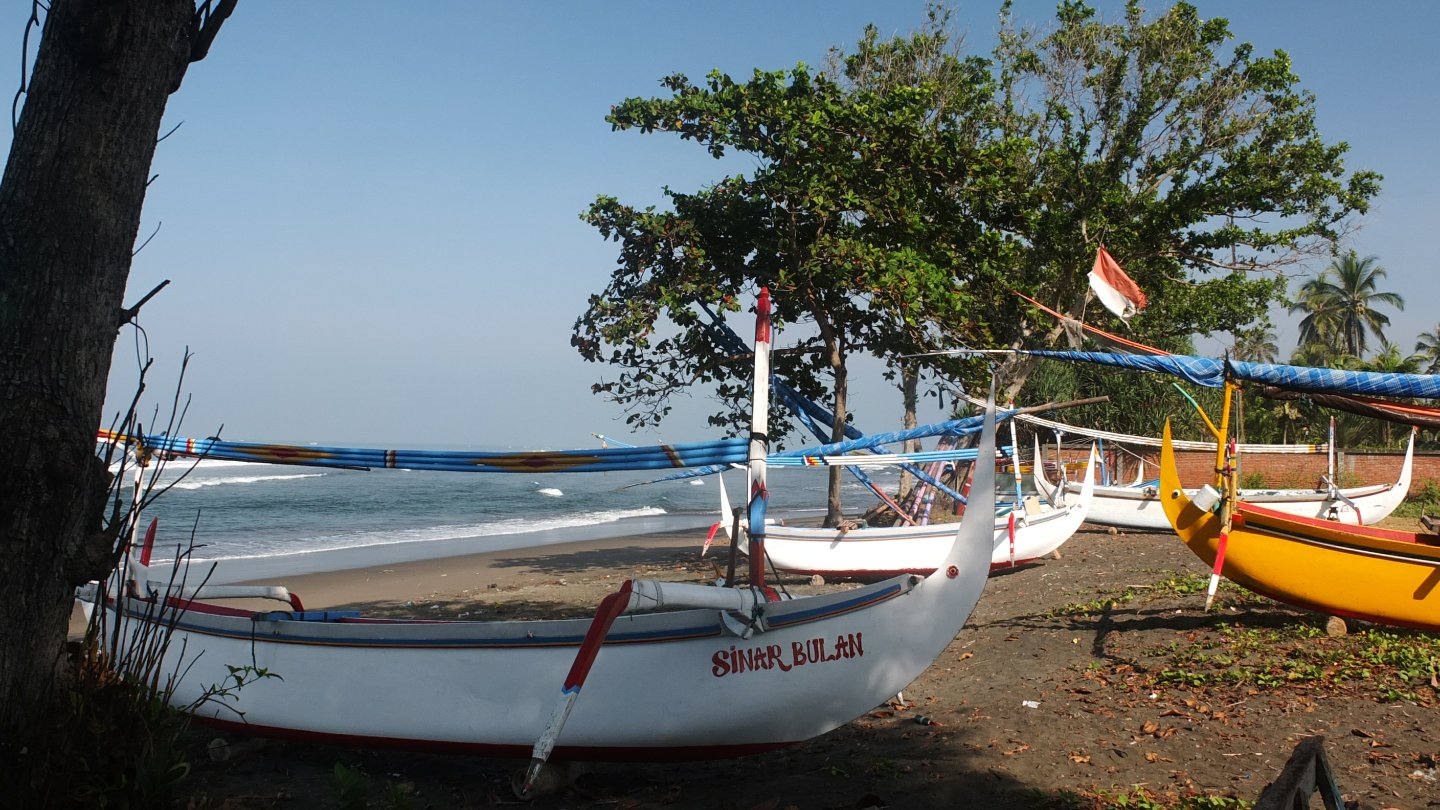 Then we walked around for a little while. We started by the beach. 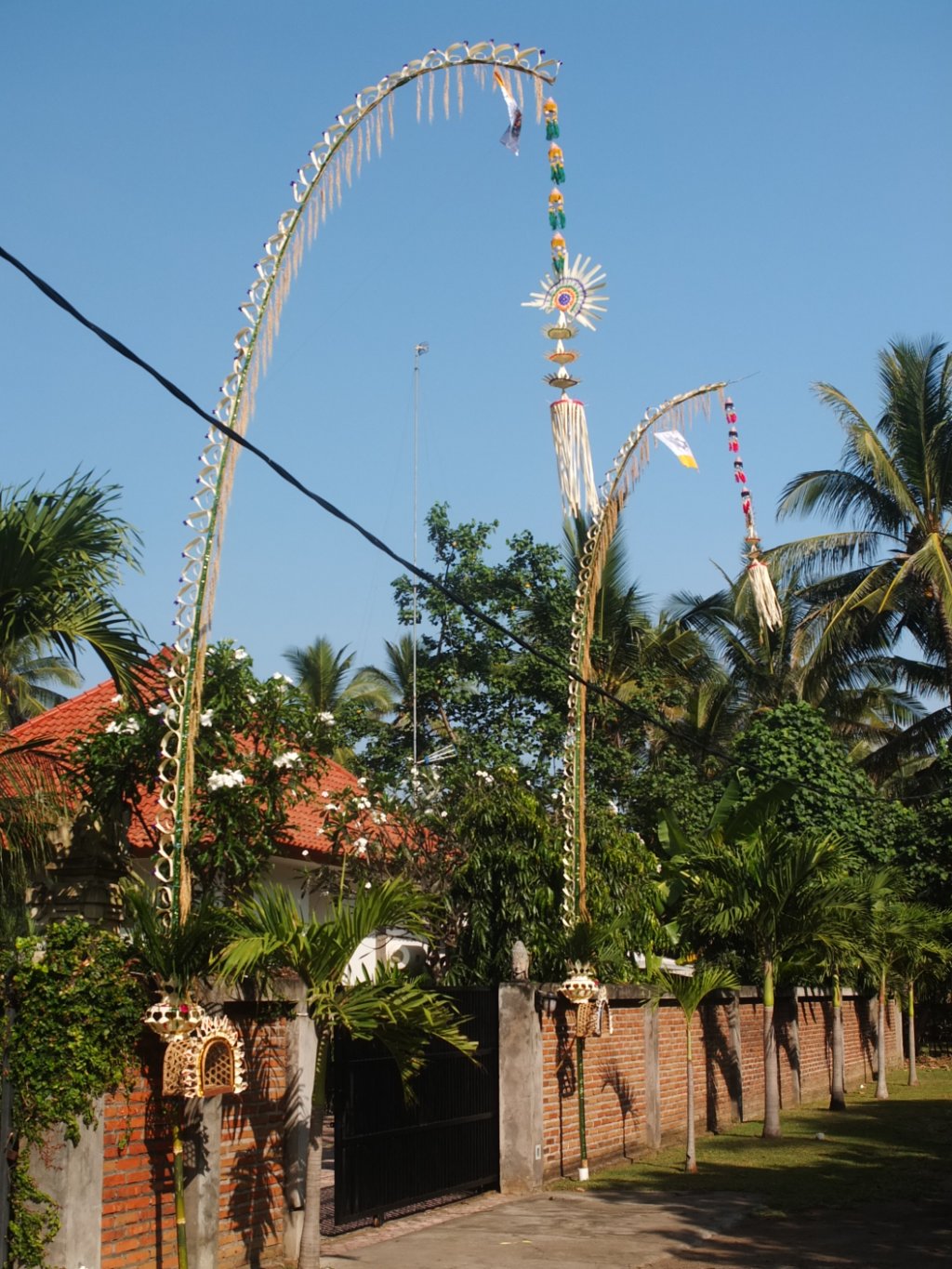 Then saw some Penjors already made.

Then we came back to his house and went to see his neighbour making a Penjors. Actually I did not see much because he was only doing the preparation. And because of his scooter washing business he stopped many times. I was very tired so I had a nap. Then we crossed the road again back to Putu’s family house. Finally Putu thought I wanted to leave. Maybe he thought I was voted because I was sleeping. Nope I’m just tired because sleeping at night is very hard as the Ramadan is still on going. The nights are very short like from 22pm to 5am. In Australia often I slept 10hours per night… Anyway, it might be a sign for me to move on. I’ve got a bit more than one month left in Indonesia and want to see more of it. 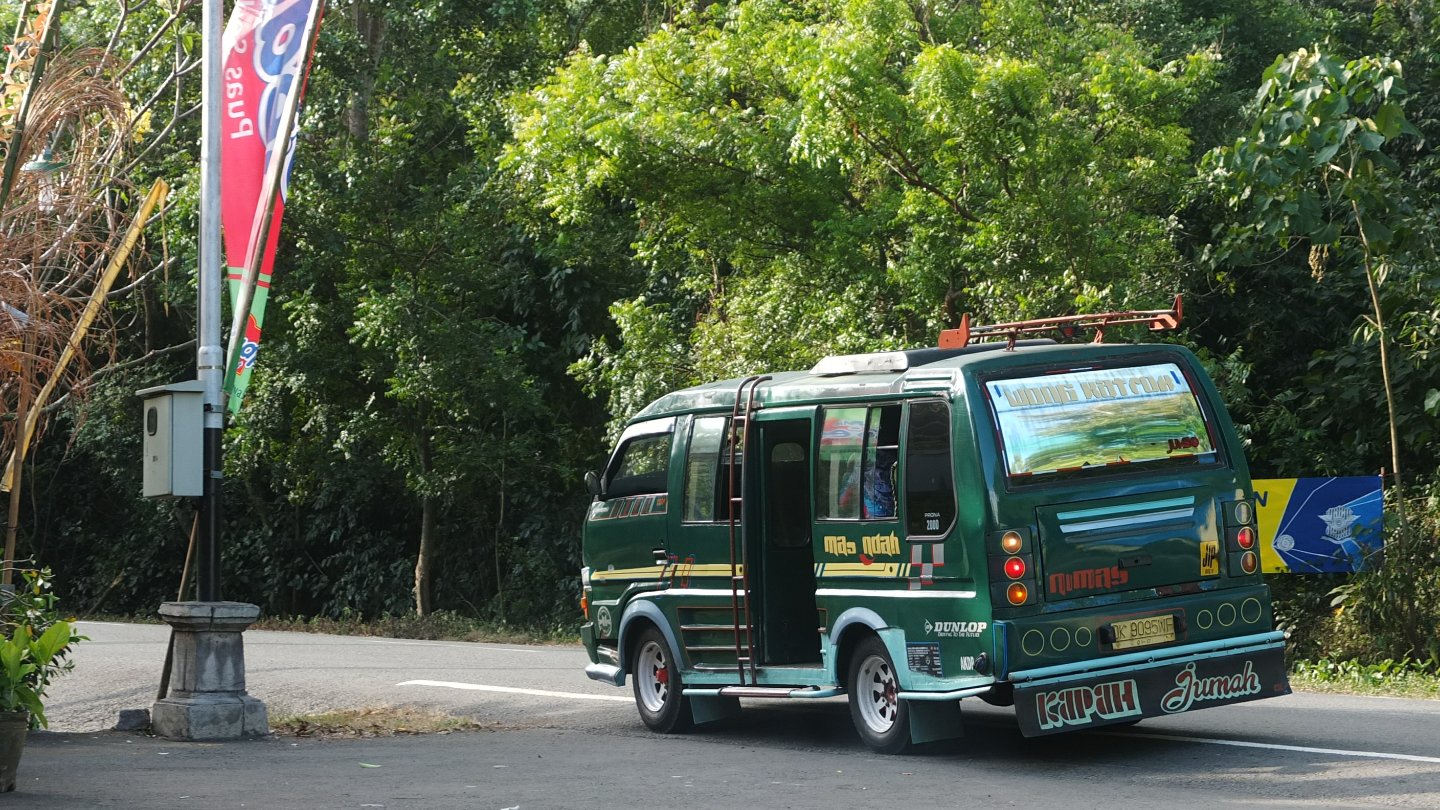 I’m back on the road though and just had a break on a tiny rest area. This van is actually a minibus :-) What a style! 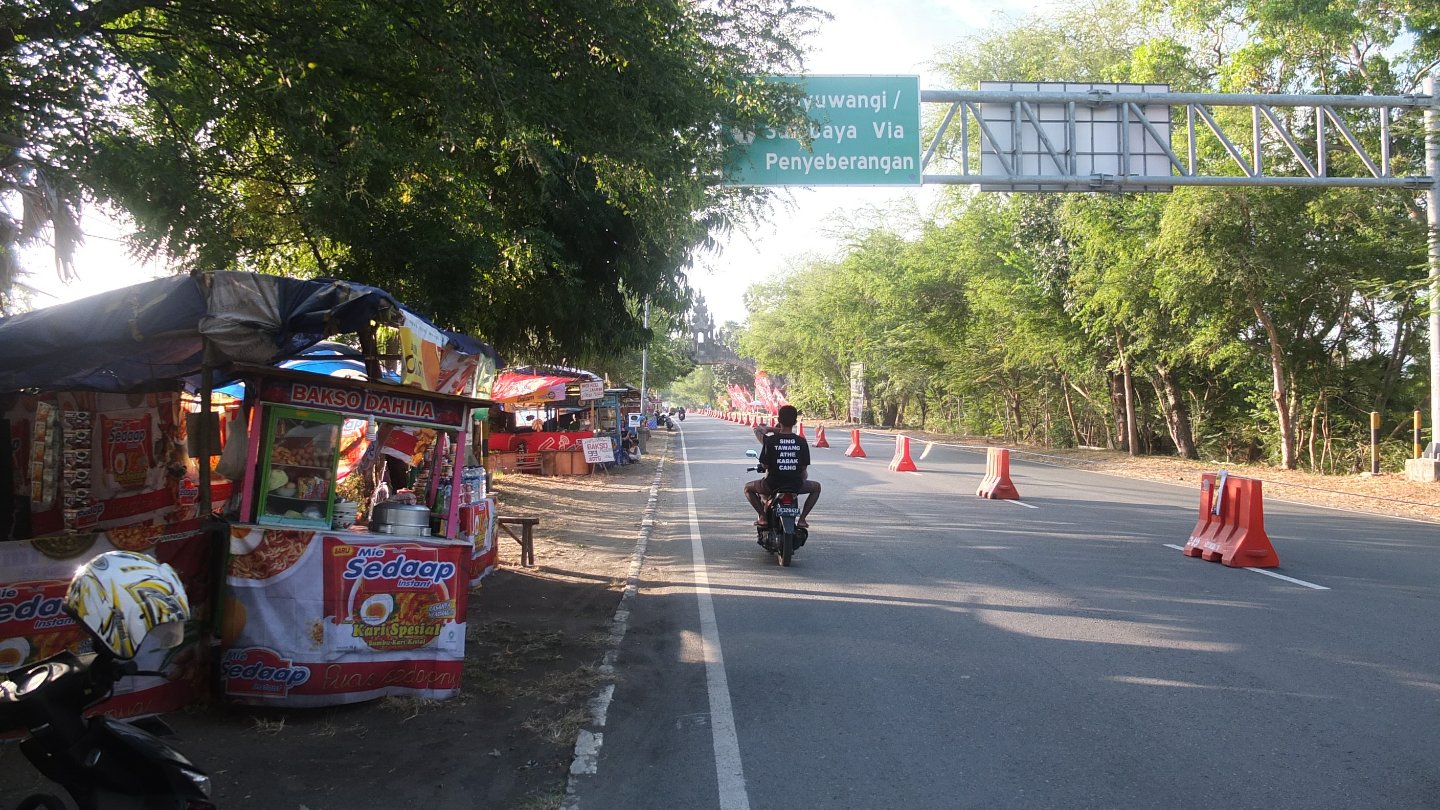 The road is slightly hilly all the way to Girimanuk where the ferry is. I’m nearly there now. The traffic is dense. The ferries run 24h/24 7days/7 so this place is always busy. On the left side there is warung after warung so I won’t starve :-) 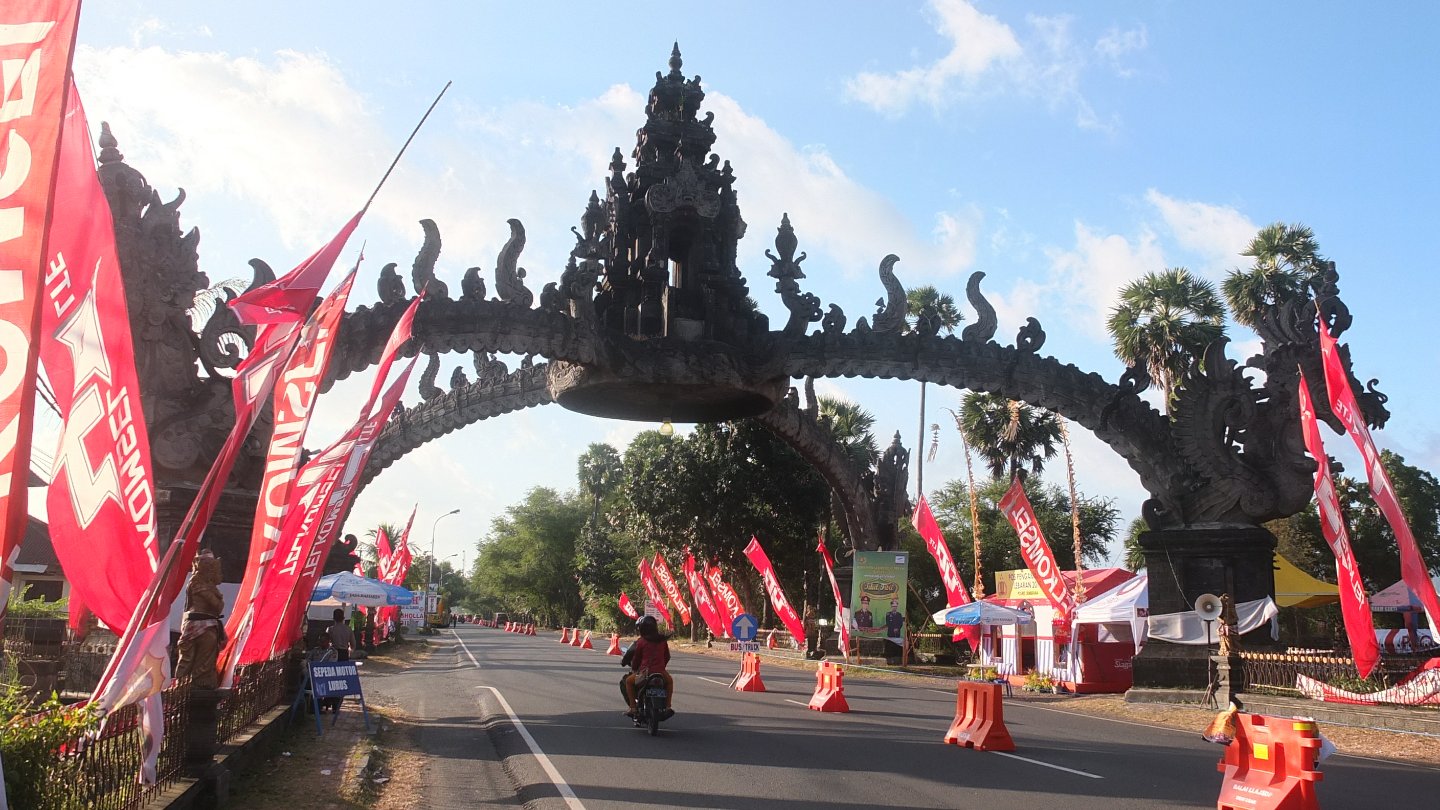 Wow, impressive sculpture! It must be the entrance of town. 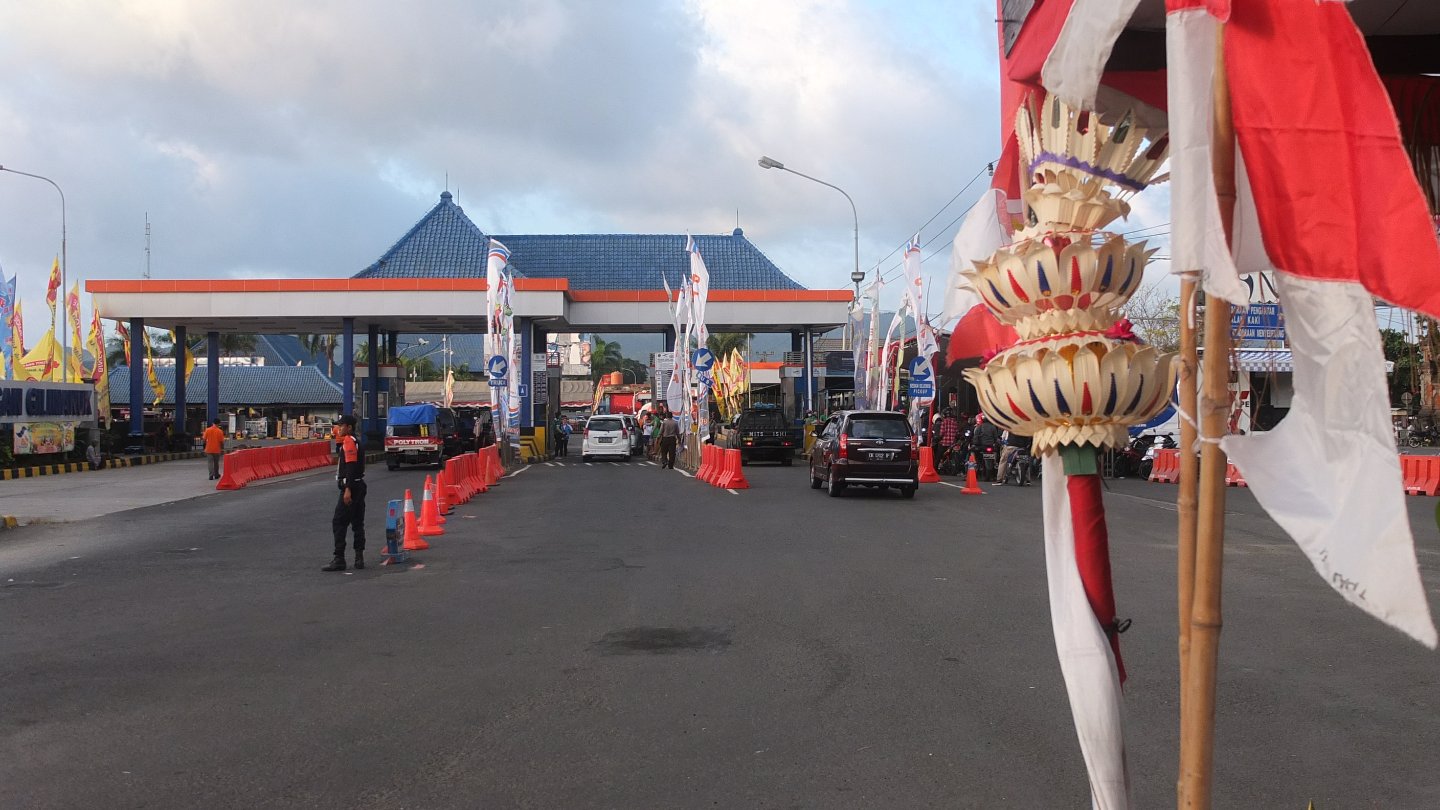 And this is the ferry station. Putu told me that when I get to Java to not arrive at night, it would not be safe apparently. 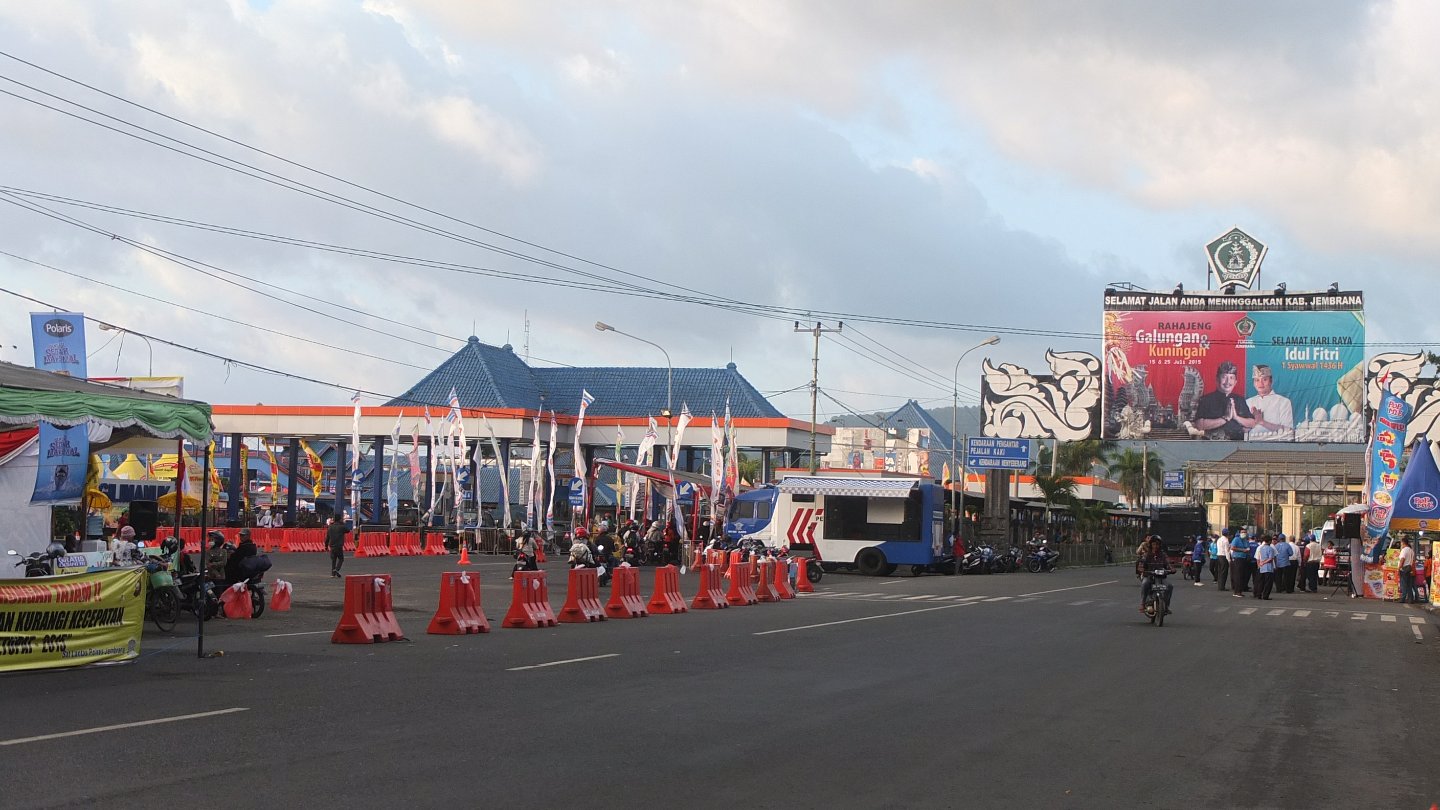 Now I know the way to go and now I’m going to find a spot for the night before dark. To get to the ferry, there is only one long straight road. Before a junction that allows car to go to Lovina. I’m going to go that direction to find a place for the night. 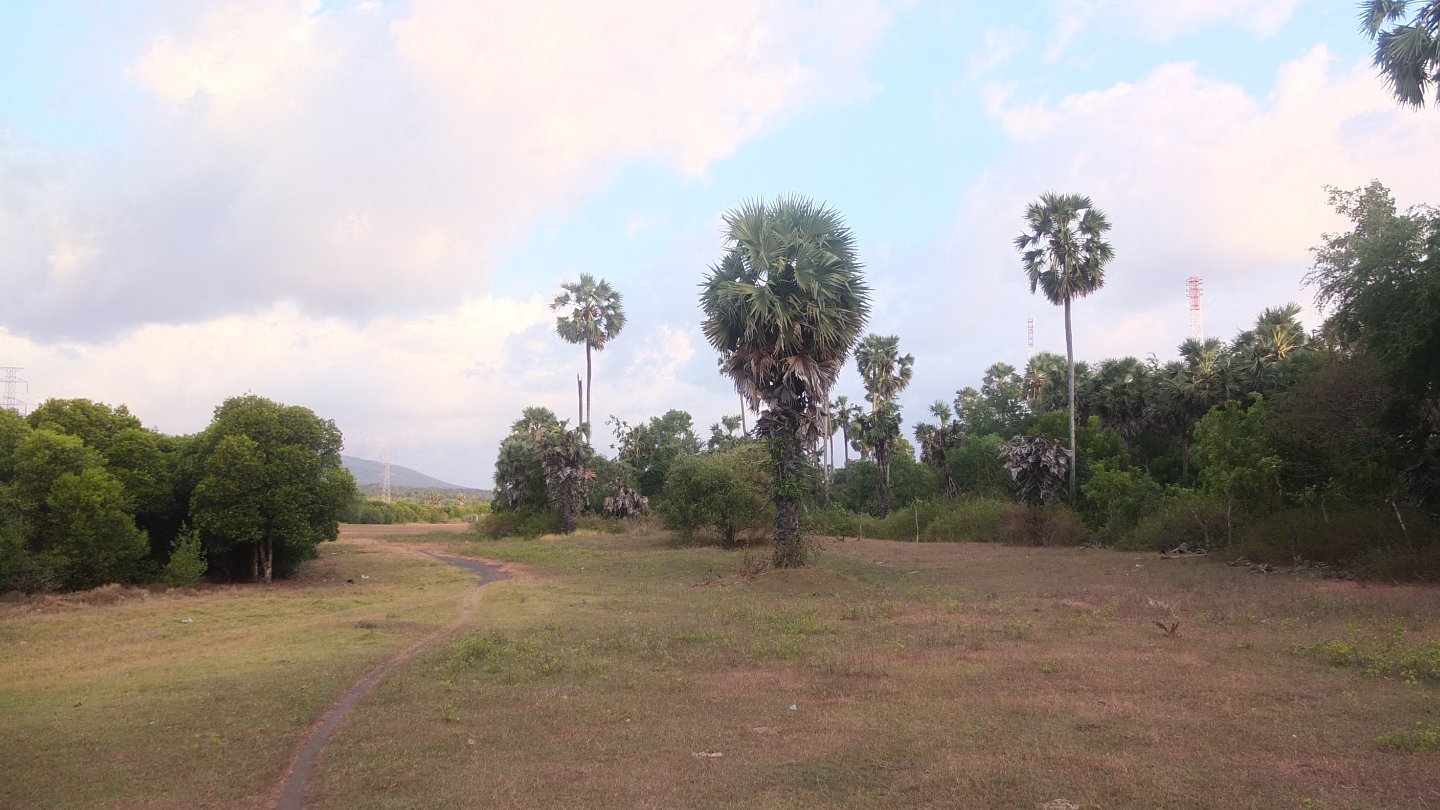 I’ve checked maps to see where there was green areas. This one is good. It’s actually next to that long straight road. The problem is there is not trees like I need for my hammock. When there is they are too far from each other. I will continue searching further. 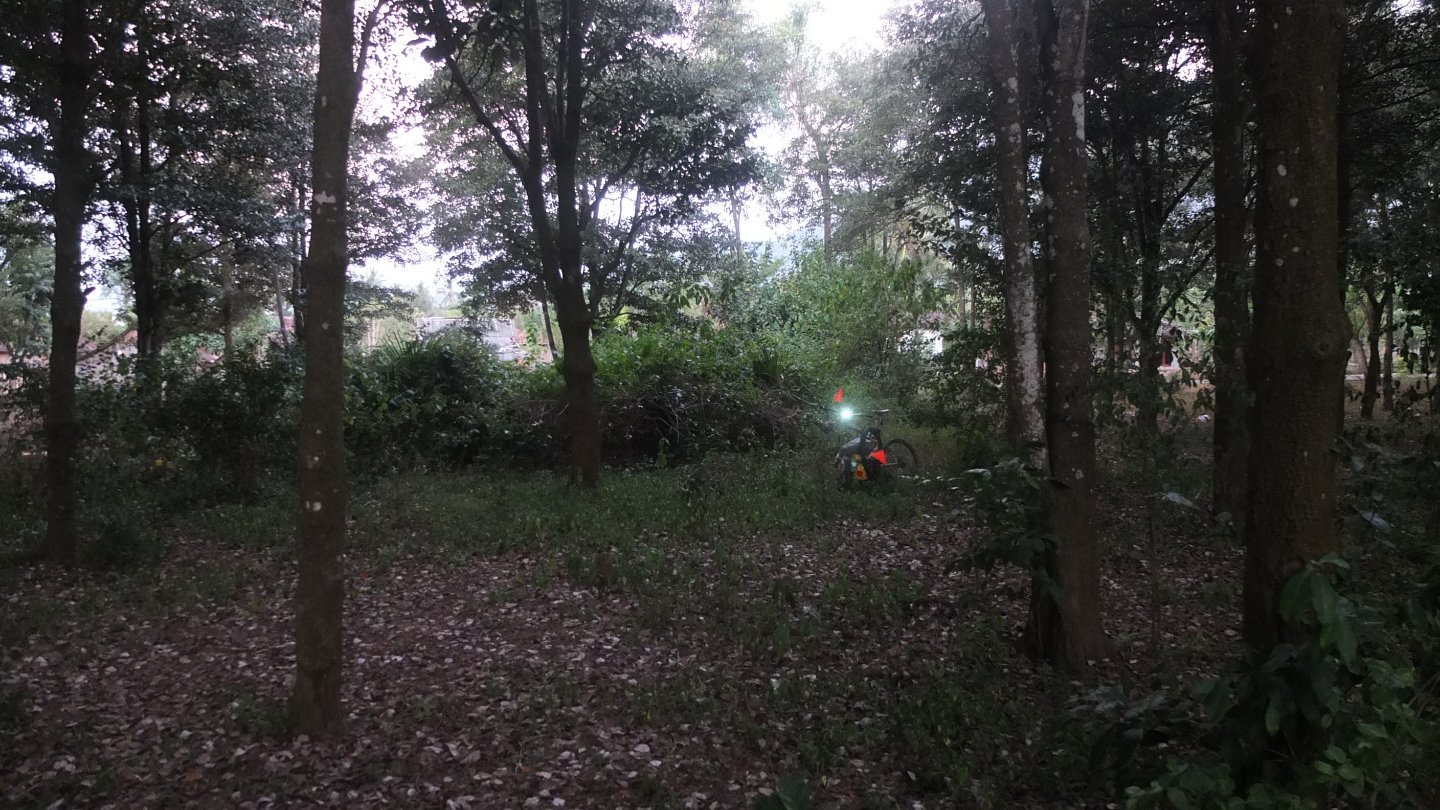 Finally, on my way to Lovina, I found a tiny road going off the main one. This spot will do it. On one side there is homes and the other is forest. This is the first time I’m going to sleep in my hammock!

Well, I thought I would sleep but I forgot something: around 7pm, one guy started to sing. Yes it’s still Ramadan. Then another one started, then another one and another one!… The worse is they sing independently for their local community. It’s loud and it’s just a noisy mess. I don’t mind religions but I would like to sleep at some point. Maybe I should cycle at night.