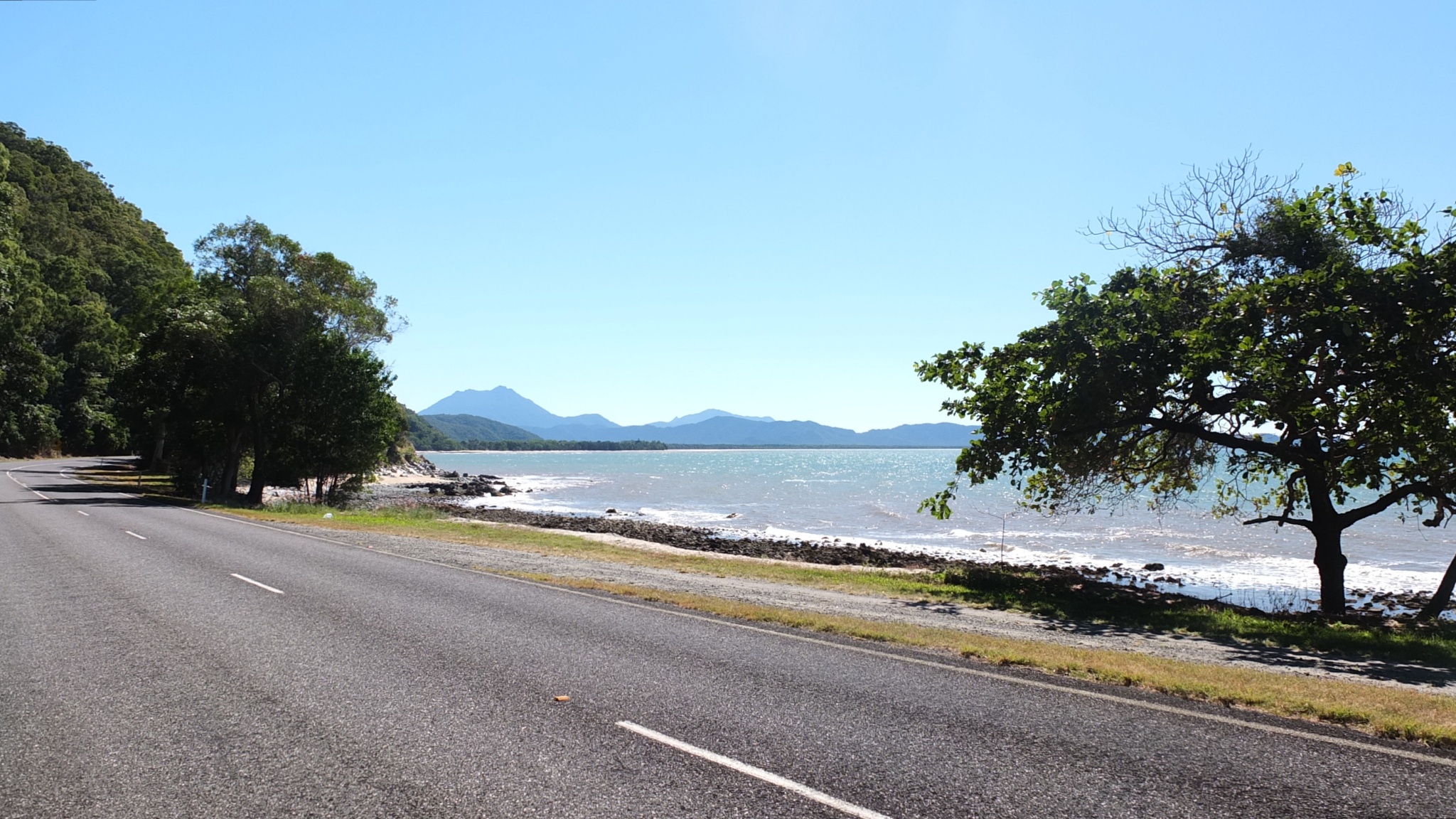 Today is going to be a surprising day but I don’t know it yet. Yesterday in Port Douglas, several people I met told me to not sleep in Mossman. There is plenty of aboriginal people and they usually fight against each other. It’s not safe and there is nothing special to do in this town. Well, I’m always listening carefully what tell me the people I meet but I like to see and judge with my own eyes. And I’m still hesitated to go to Cooktown as well. The road seems difficult. On the over hand I would like to visit Daintree. From there we can visit the rainforest and maybe see crocodiles! :-) So, at least I can go to Daintree, I must pass through Mossman, and then I will decide if I start my loop back or if I push to Cooktown riding by Cape Tribulation.

As usually the sun is here :-) 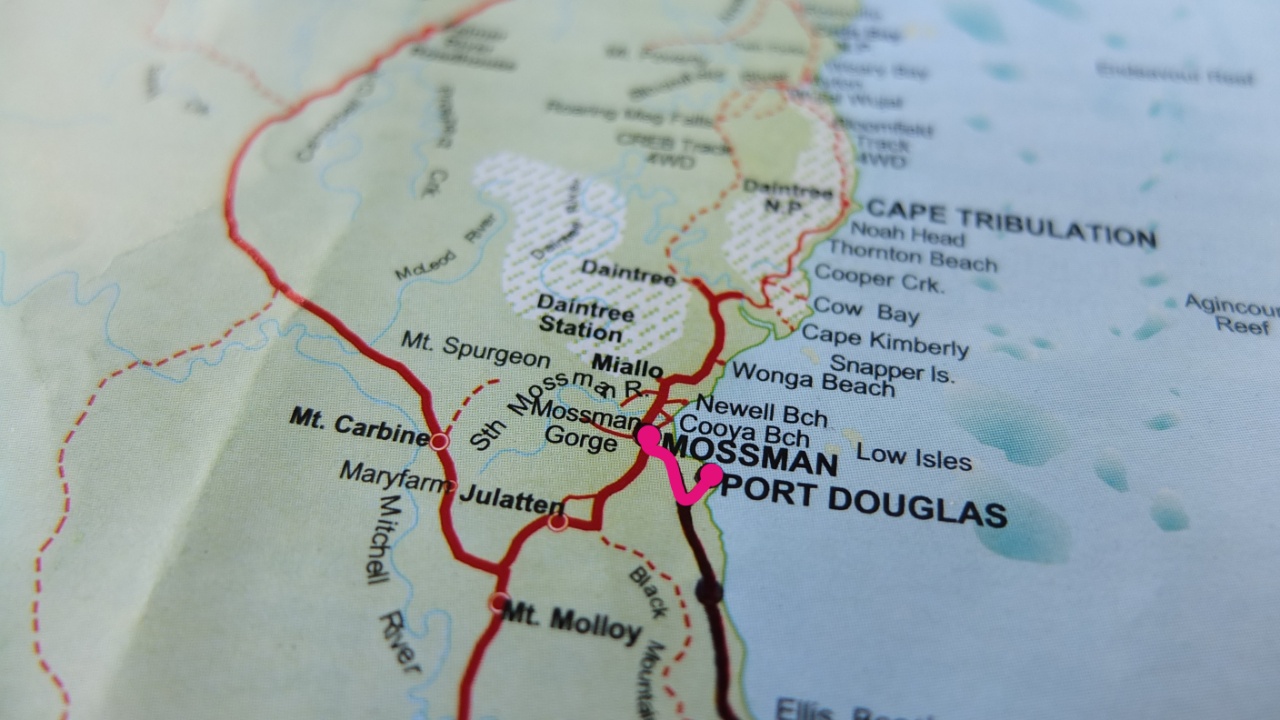 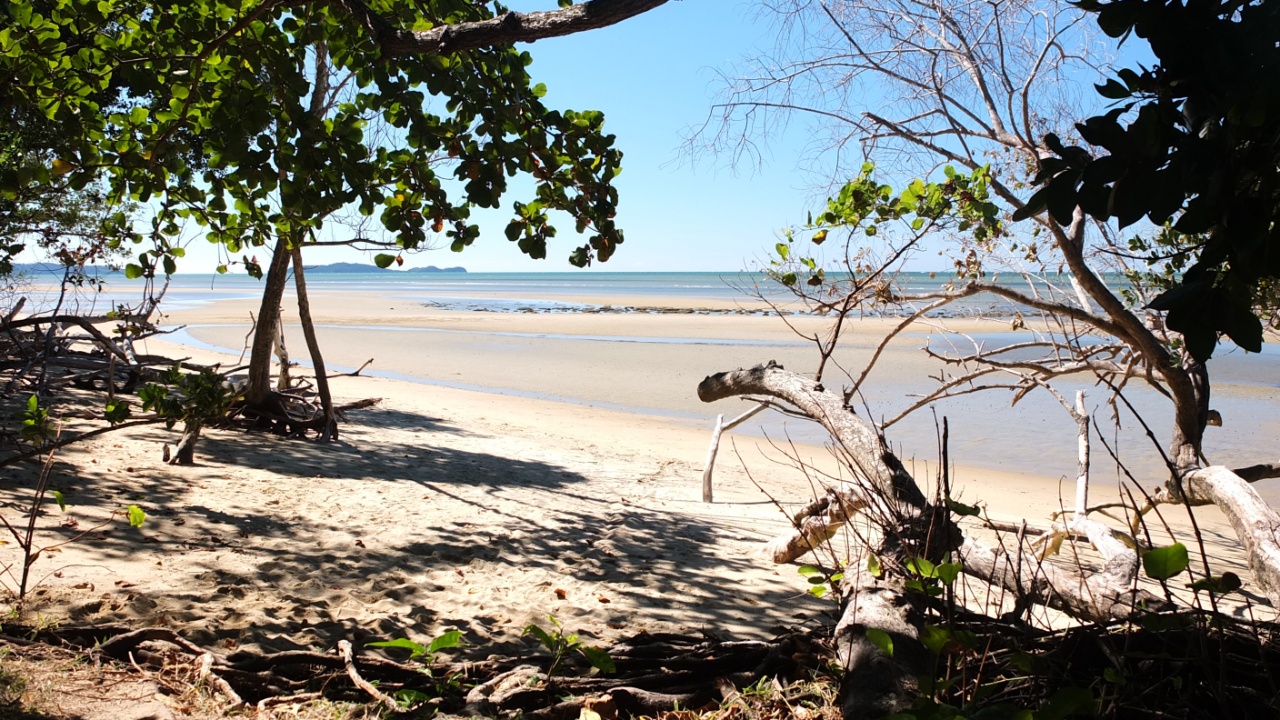 I’ve started a bit late this morning and it’s already quite hot. I’m on a “break area” few kilometers before Mossman. 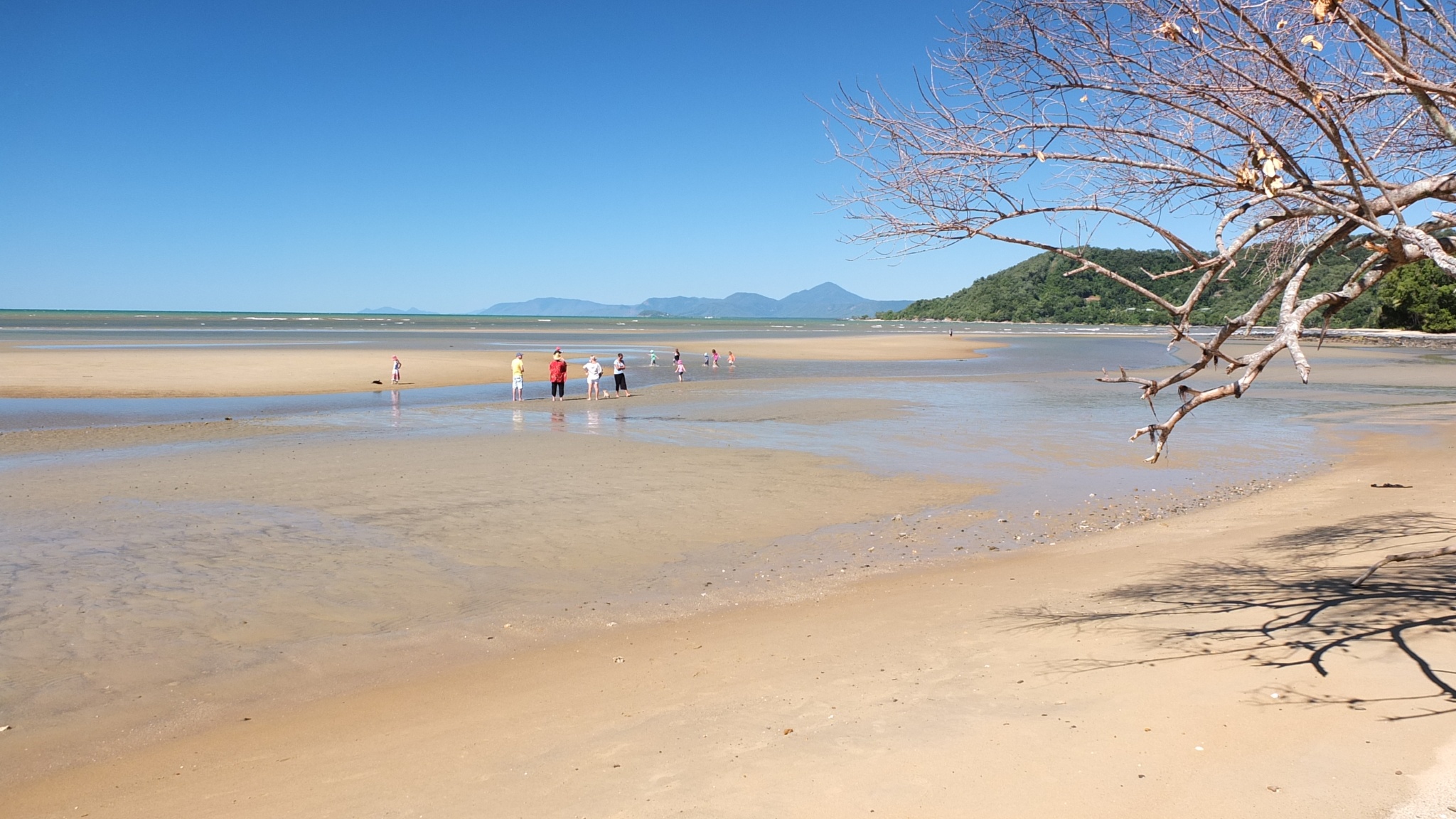 This beach is Wouhaaa :-D 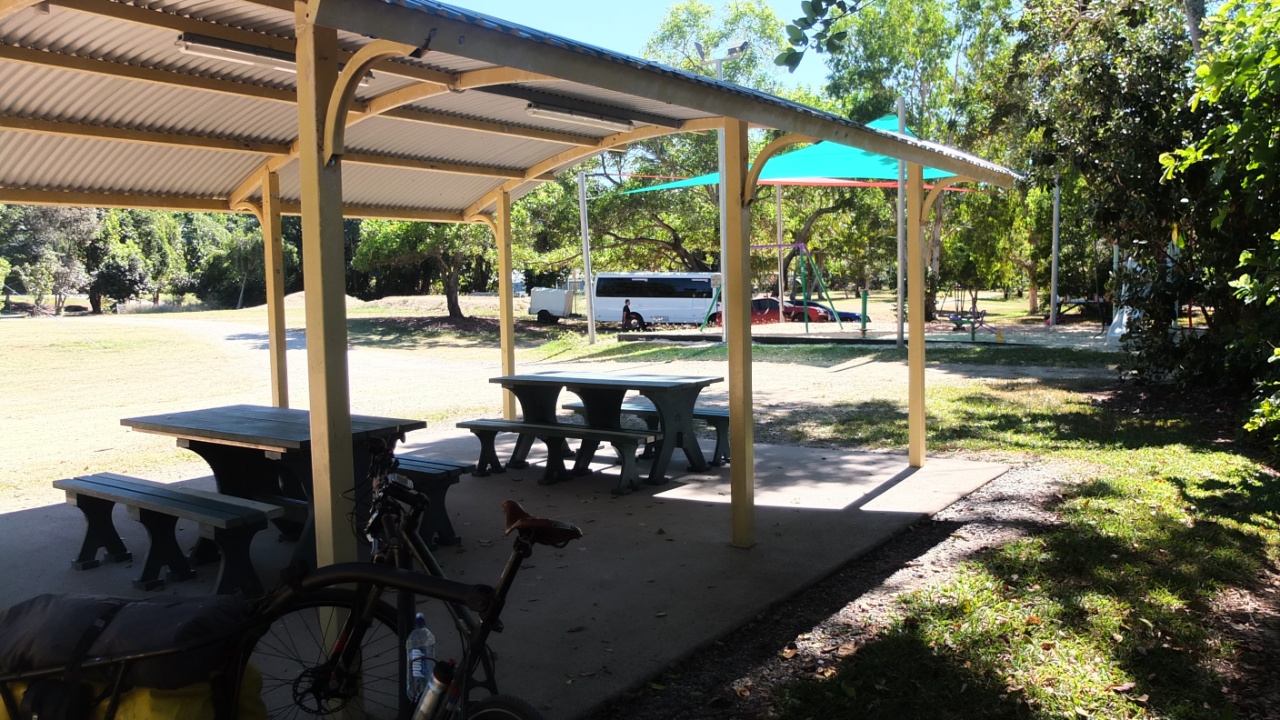 There is table, bench and shade. Perfect for lunch time :-) I’m going to wait until 3 pm or more to continue cycling. It will be much sustainable at this time.

And the story starts…
A moment later, an aborigine family comes and takes sit next to me. I’m repairing (again) a puncture. Then we start chatting and they ask me many questions. They seam friendly but one of them is really drunk. She found a piece of shiny golden “bolduc” on the ground and attach it around my head. OK, why not. I look like an hippie now haha :-) We continue chatting and other members of their family, or maybe friends, come and leave the place each minute. They introduce me and I try to remember all those new names, not easy with my golden fish memory…
Maybe 45 minutes later, Stella invites me to enjoy some time in her place : “It’s 5 minutes from here by walk”. Bah, why not. They repeated many times I look friendly and they respect me ’cause of my travelling style. They said : “we are nice people, friendly, and you will tell to your mum and dad that you met some good aborigene people in Australia, love and respect”. Yes of course I will!
We arrived to the Stella’s home and she offer some chips with a “French onion cream” (They use always the “French” word to show the good quality of the product. Well, I think it’s something like that. Do we have special “French” onions in France? I don’t think so..) Anyway it’s nice :-) During that time, three of the four sisters (I’m slowing learning who is related to who) are still drinking and smoking. Now, three of them are getting drunk I think but they are still very nice with me. Stella tells me :

Later Stella proposes to offer me something as a souvenir of them and brings me a gift. It’s a squared tissue with a illustration on it. This is the symbol of the fraternity between Australian and Aborigines. I think. Wouhaaa! Thank you Stella :-) it’s a good souvenir :-D “I will but it in a frame when I will come back in France :-)
Then, Julie went in the kitchen to prepare a typical aborigine meal with : rice, corn-beef, brocoly, carrots, noodles, potatoes and certainly some other things. They serve me but I’m the only one eating. I ask Stella why they don’t eat and she answer : “we don’t eat”. Oh?! It’s strange… The meal is really good and I thanks them for this. They told me the name but unfortunately I’ve forgot the name. They are still drinking, smoking and asking me if I want to watch the television, if I want to sleep here. I think they are so afroad that we think aborigine are not good so they do too much. After 20 times more, I accept the invitation for the TV. Maybe it’s not polite to refuse like I did until now…
We come inside and Stella open the sofa to make a bed and turn on the TV.

Finally I’m alone, inside, watching the TV during they are all outside drinking and smoking. Stella asked me maybe 50 times if I wanted the fan on, eat more or sleep.
Around 8pm when I was ready to sleep, everybody came inside take something to eat (finally) and watch the TV. The light was on and Stella told me : “if you want to sleep you can”. (Hum, well… how? Everybody is inside now, sitting on the bed and talking… how can I sleep like this?)
Around 9 pm, Stella proposed me to go to Julie’s house for a moment. Well, OK, why not. I don’t want to refuse proposition any more even if I’m getting really tired. The Julie’s husband comes with a car. I thought we were going in two groups but I’m wrong! We entered all together in the car, 7 people in the same normal car! And I’m sitting onto a young woman… what a shame! Fortunately we had less than a kilometre to ride but why by car when we could walk that short distance? During this incredible trip they put the music so loud, the speakers are saturated, it’s horrible for my ears…
We finally arrived to Julie’s house where I meet four new children. Julie was 15 years old when she had her first one! She is 36 now and 4 children to take care of, Wouhaaa!
We stayed there until 00:30 am and it was getting cold. Then Julie received a phone call from the police because one of her neighbour complain about the noise. She was getting angry and phone the police back to tell them we didn’t put any music as the person said.
Stella ask me one more time if I wanted to sleep. I answer her that if I could sleep now it should be great because I must cycle tomorrow. 10 minutes later we were compacted again in the car, crazy sound on maximum and came back to Stella’s home. She asked me ON more time if I wanted to watch the TV, turn the fan on’ or eat something more but I was okay. I simply desire sleeping Stella, nothing more :-)
Then she went outside again with her sisters and they left the place again to go to the city center. I could sleep a bit. Stella came back later. Maybe around 2 o’clock in the morning everybody was sleeping and the place was quite. Whouhaaa, what a journey! :-D