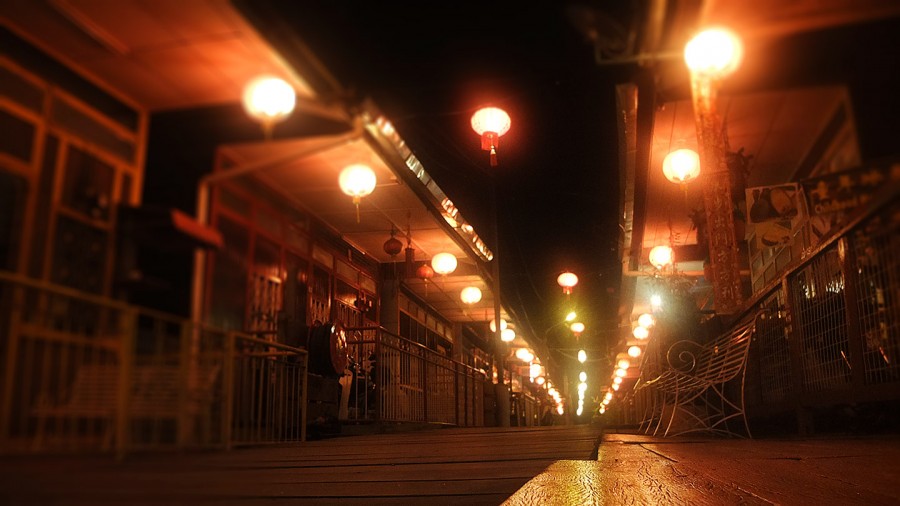 We did not see everything in Chinatown yesterday so we have a second round today. We have visited more Chinese temple, seen more street art and walk too much! Yes, I prefer cycling than walking. This is much easier :-) Tonight is the last day of 2015. We planned to see the fireworks. We saw it but not in the best conditions. Finally, this is when we returned to our campsite that the night really started. Always no plan is the best one :-) That worked for 2015 and it’s going to work in 2016, for sure! Happy New Year! 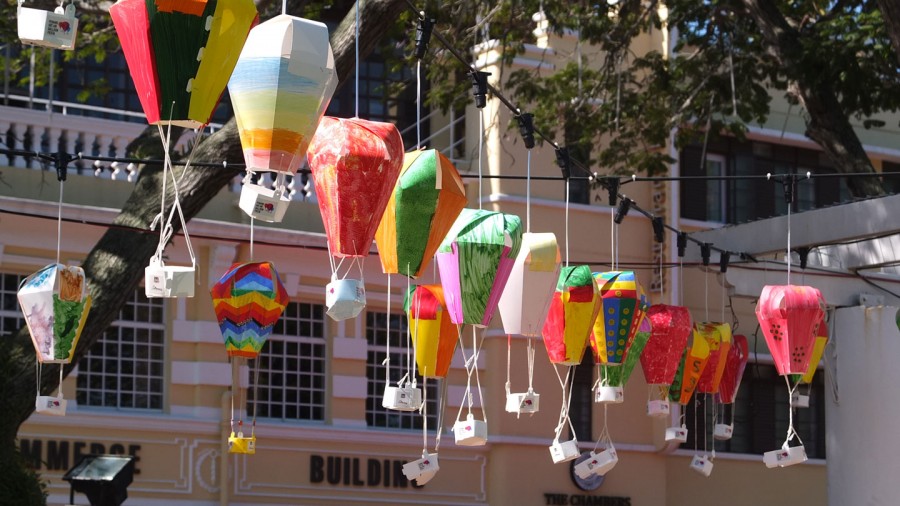 In february 2016, an air balloon event is organised in Penang. I wish I could see that. This must be so cool but at that time, I will be in Thailand. 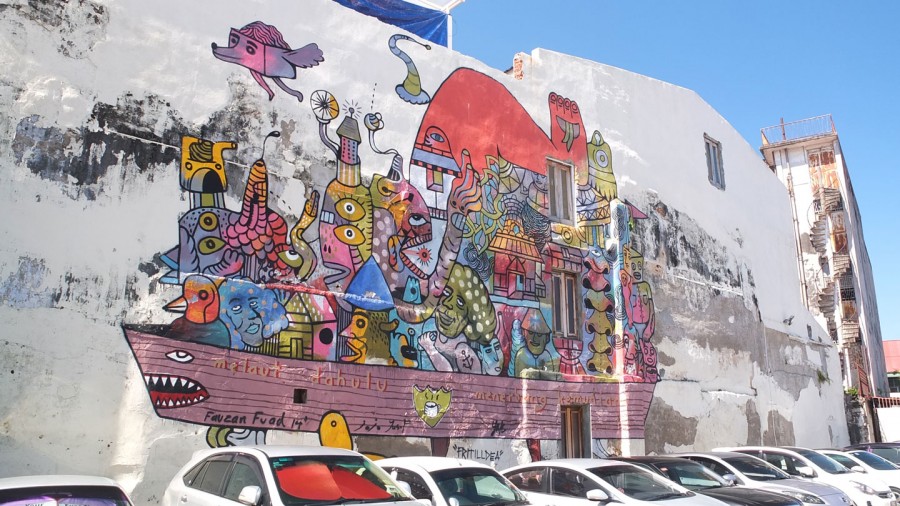 That a huge street art! 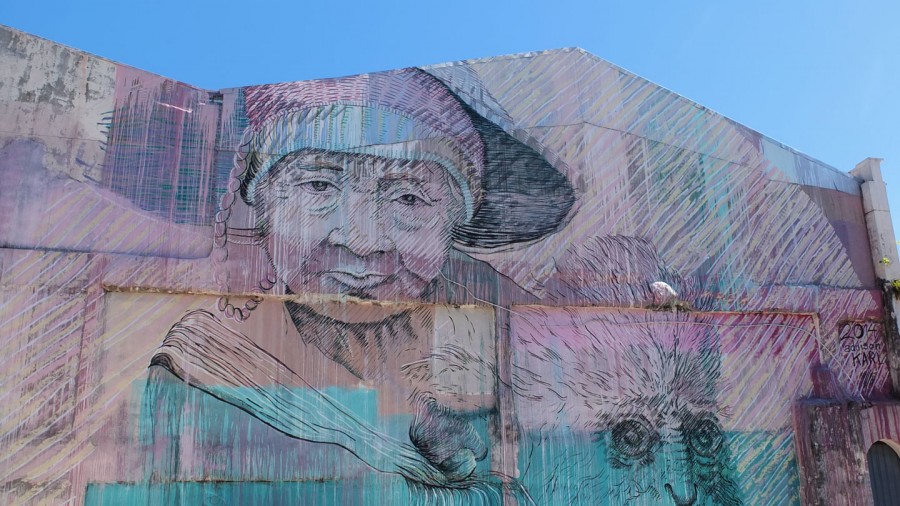 Just on the oppositite side of the “boat” this one. Very nice style. 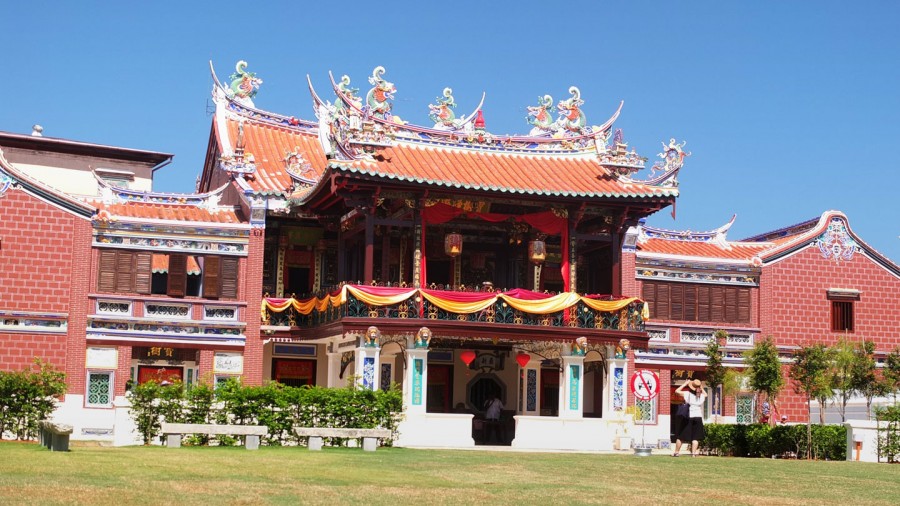 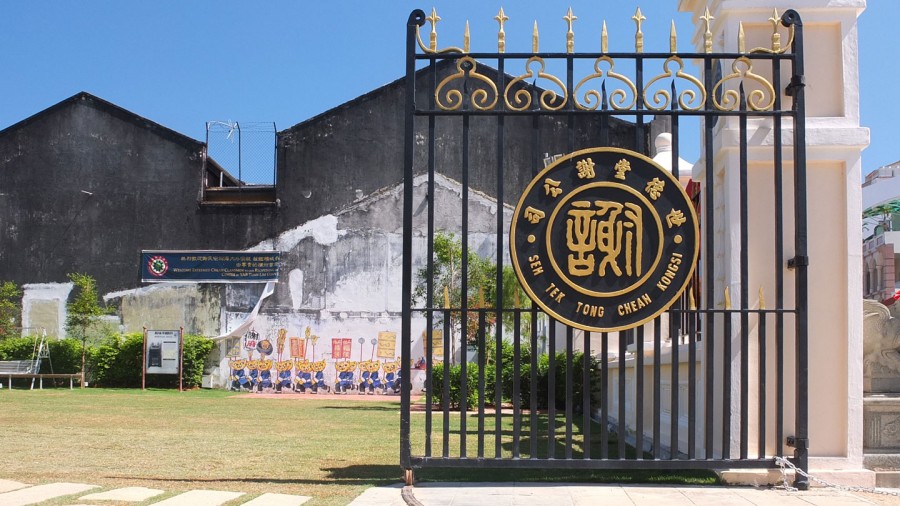 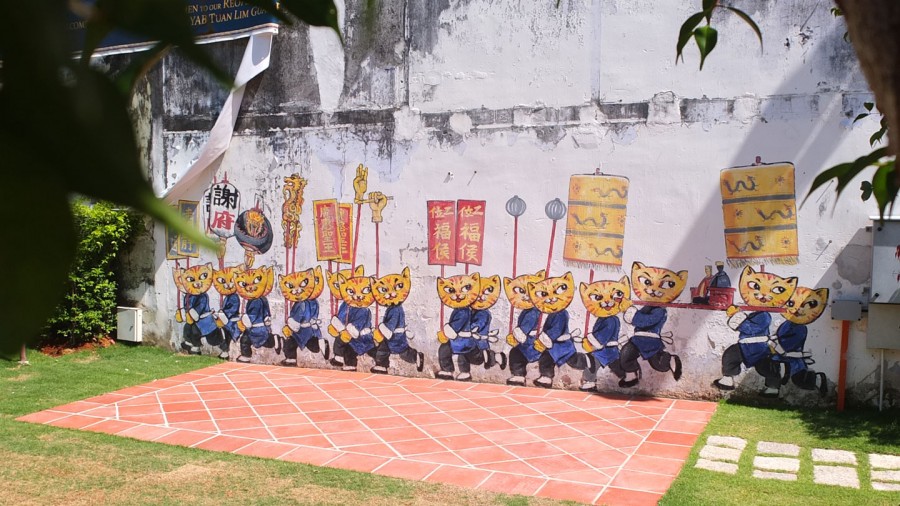 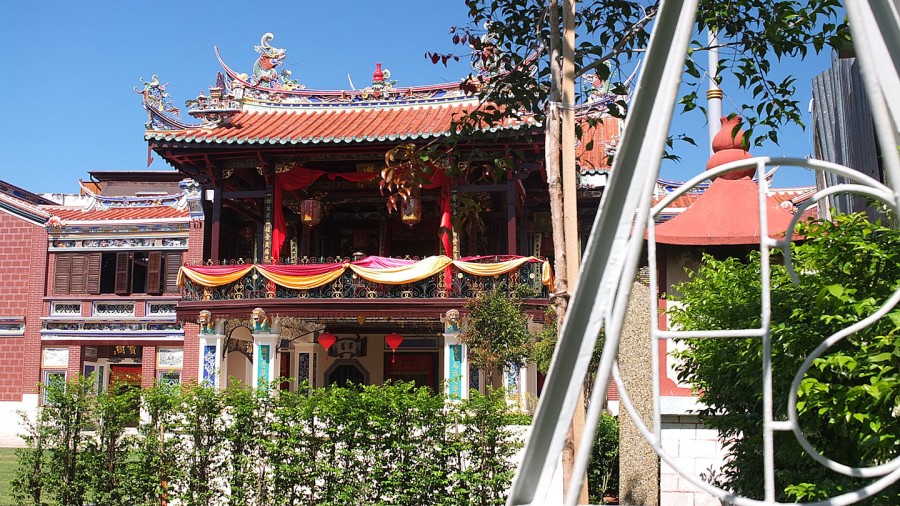 The same temple from another point of view. 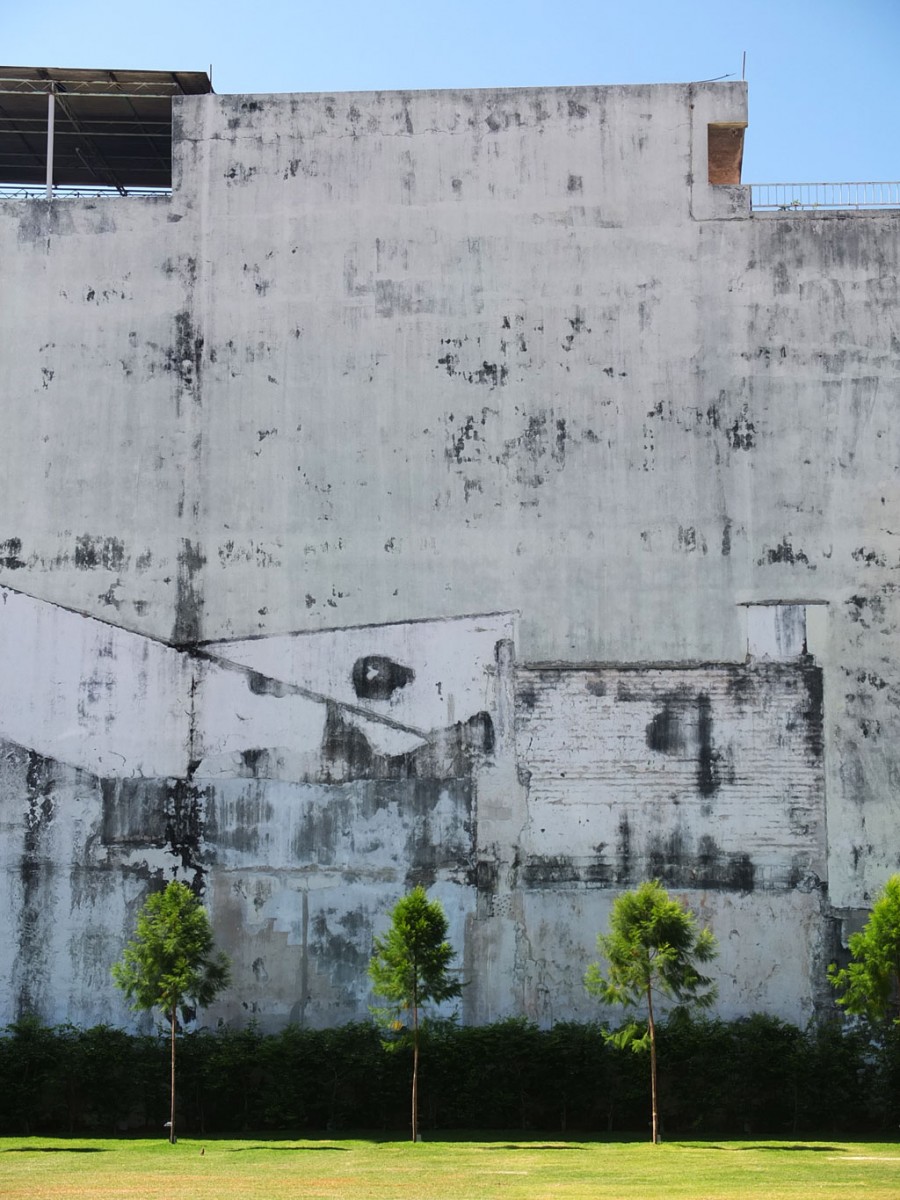 Looks like they get rid of a house or something here when we look at the marks on this wall. 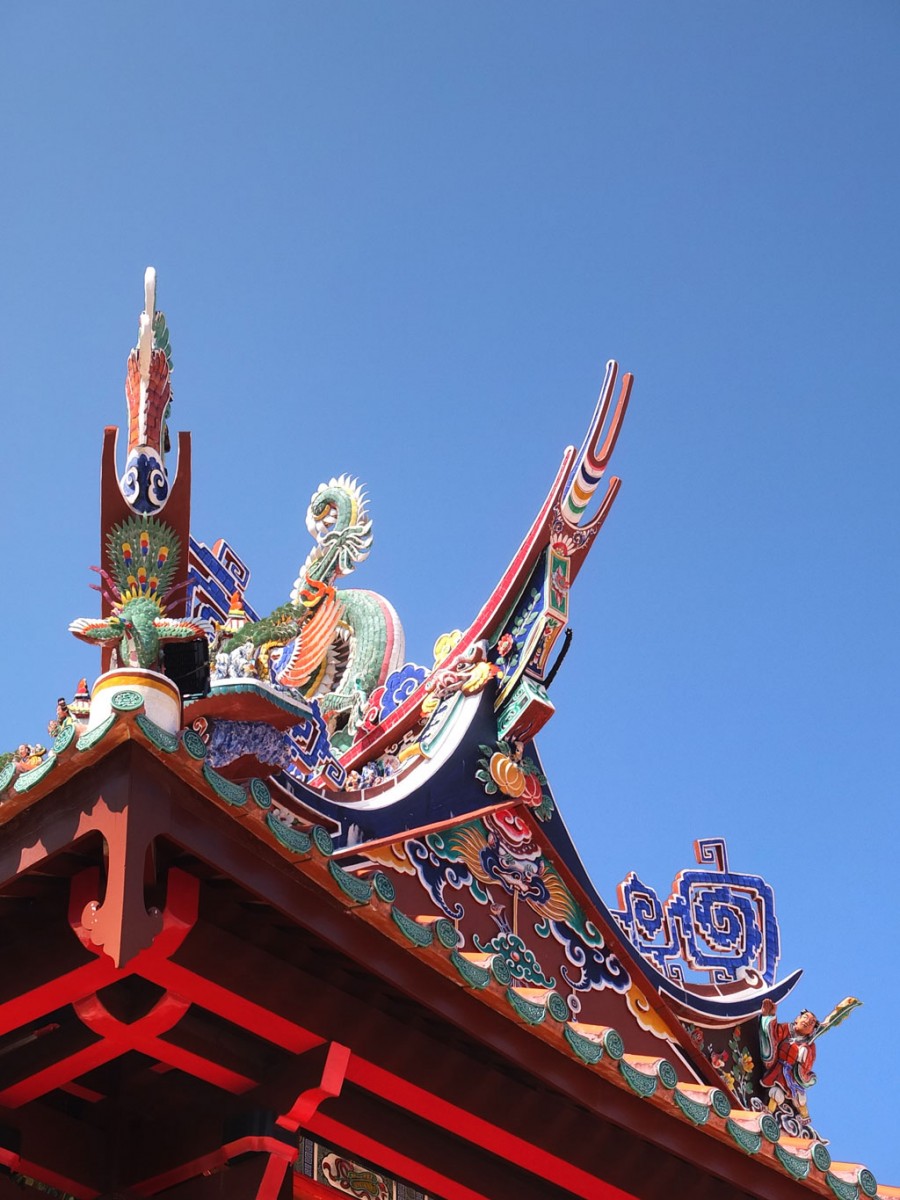 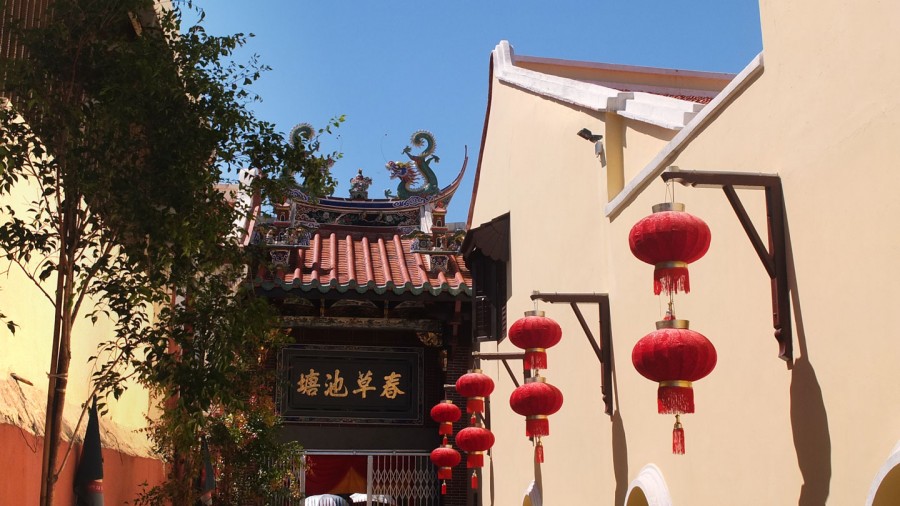 A chinese woman who apparently know them told me that the instruments was made in Switzerland. It’s called and Hang drum.

This is how Chinese enjoy New Year’s eve in Penang :-) 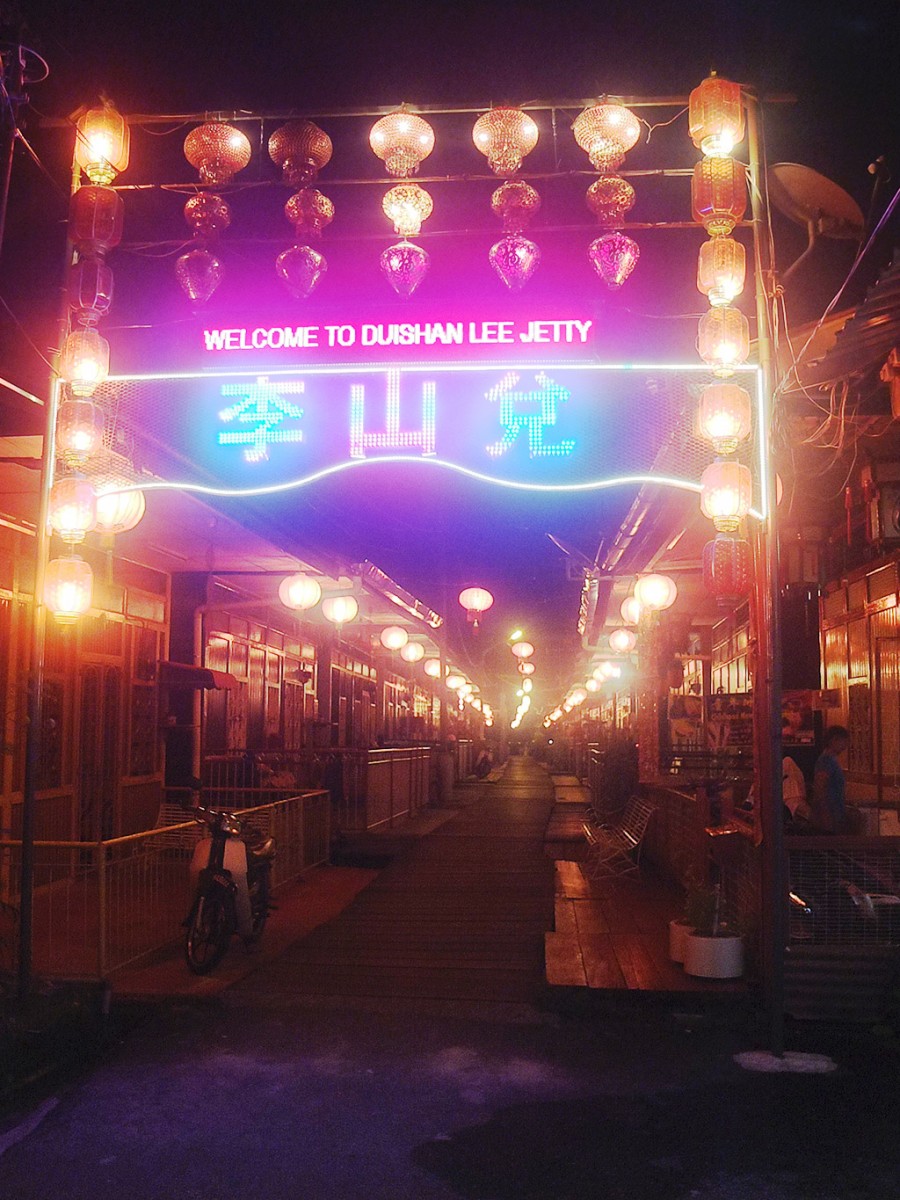 This later afternoon, we found a temple over the water that started to be illuminated. We are now looking for a nice point of view to catch it at night. We were cycling along a main street when we discovered this place.

That’s a pretty district, all built on the water. It’s surprisingly very quiet here. After few metres walking in, we can barely hear the cars behind us. 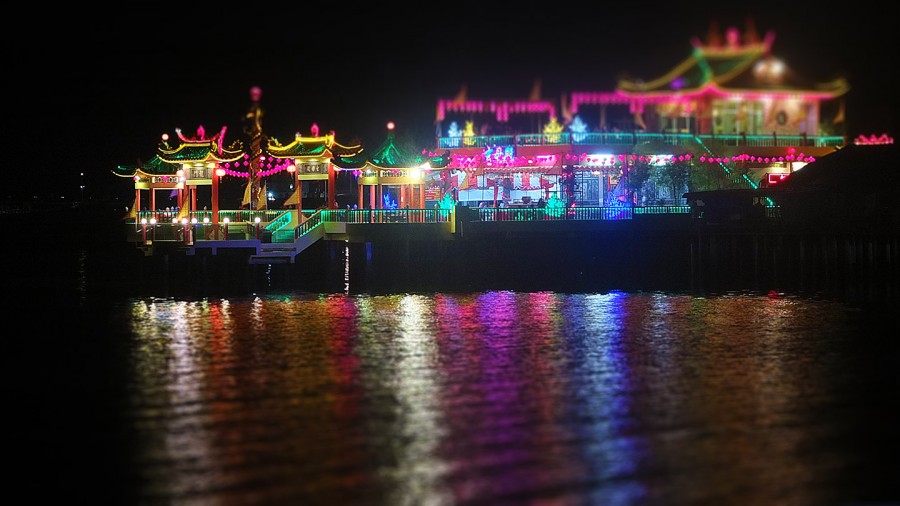 That’s the temple I was talking about earlier. I think it’s like this all year round, not only because it’s Christmas or New Year’s eve like tonight. Ah yes! I’ve forgot this, this is New year’s! 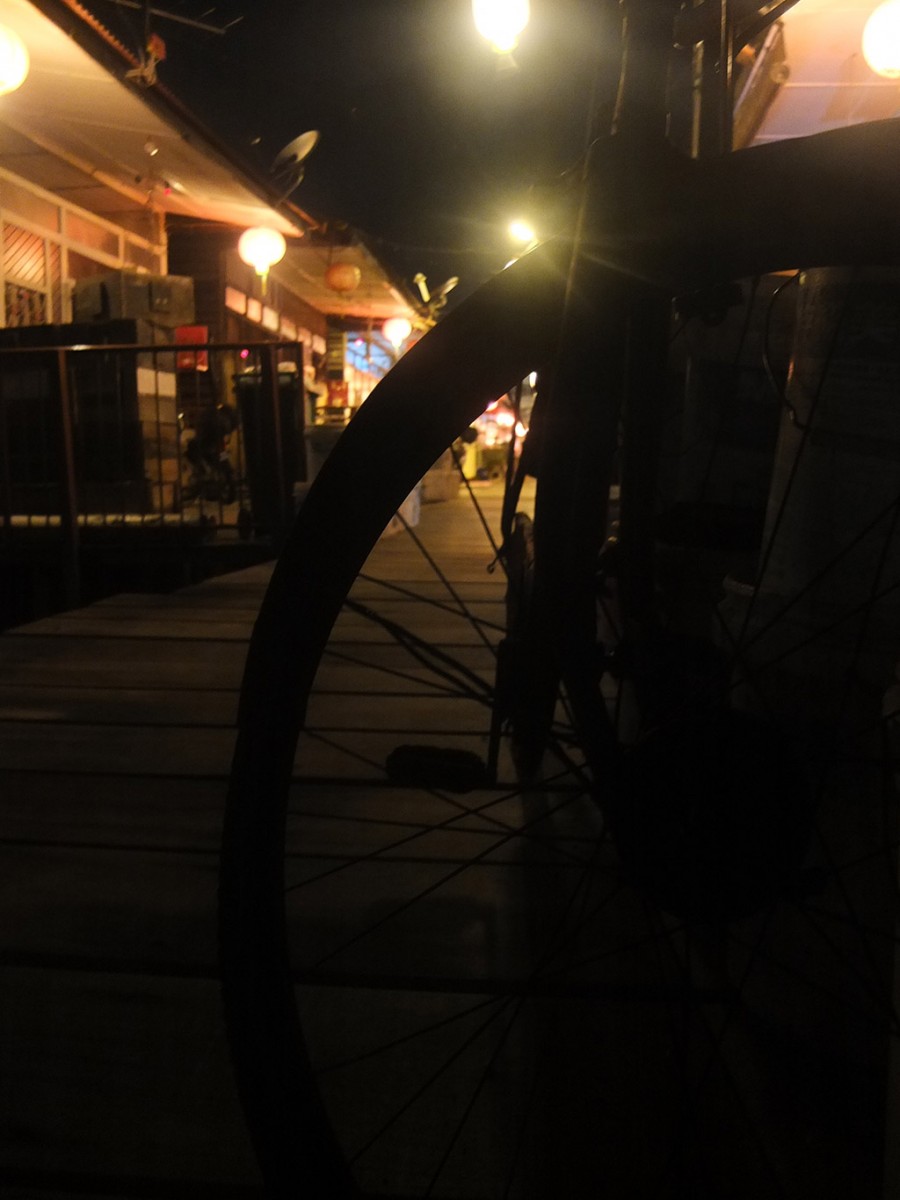 The same street through a bicycle wheel. 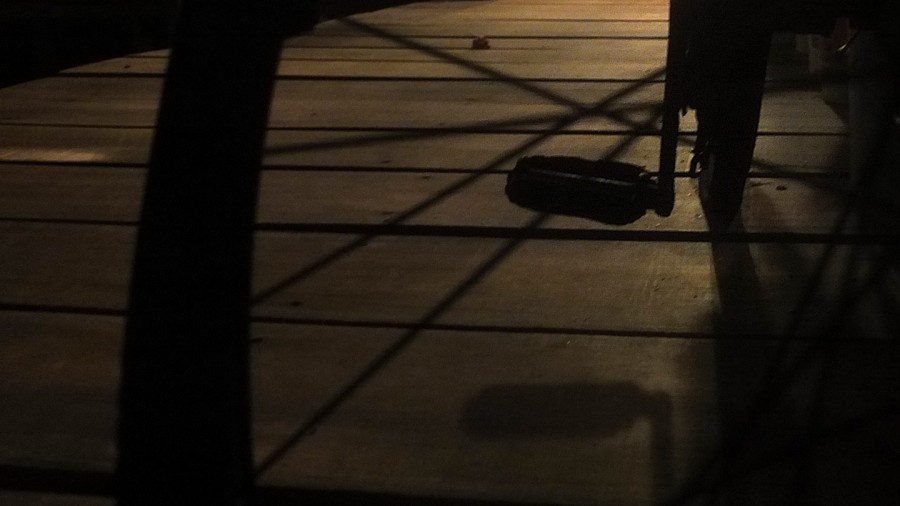 Finally, we found a cheap place where to have a drink and realised too late that midnight was coming very soon. We have planned to go next to a waterfront to see the fireworks. On internet, I’ve seen that there is at least 4 different spots from where we could see the fireworks. We asked to a guy where was the best place. He told us to head south, there is a beach 5 minutes from here. It’s now 11:49, we don’t have much time. As we were cycling towards that place, the traffic was already very heavy. Cars and scooters were queuing, horning, overtaking each other. Suddenly, we heard the first fireworks craking. They were behind us! What! The guy told us crap! We made a quick U-turn and cycled through the queue, towards the fancy explosions. We could actually see it from the road but it would be better to be there already. Quick, quick, quick!

Unfortunately, we did not have the time to reach the park up north next to the water that the spectacle was already finished. It last maybe 2 minutes max, very quick, too quick… This is at that time when the problem started. The traffic became very thick and it was very hard to make a move. When we finally reached the park, it was completely packed with people. No way, we would leave our bicycles here with all our precious things on it. We tried to leave the waterfront as soon as we could and finally were cycling towards the campsite using to roads further out from the water.

Arrived there, about 40 minutes later, we started to set up our campsite when two guys came to us. That was the guys that stay at the entrance of the “park”. I’ve seen few of them everyday. Normally, when I see one of them, simply I say “hello” but never stop. They did not seem to bother until tonight… The guys were very friendly. They were just a bit concern of seeing two cyclists coming every night in “their” garden. I thought it was a kind of public place but maybe it’s not.

After a quick chat, they invited us to join their crew. “ok, ok, we are coming, thanks”. Once their, we said Hi and “Happy New Year” to everyone. Most of the guys are around 50 years old. There was some drinks and lots of food. I had to accept a beer (unfortunately) but we had a good time with them. We stayed until 3am until we came back to our peaceful campsite.

Few, what a night! Happy New Year though!