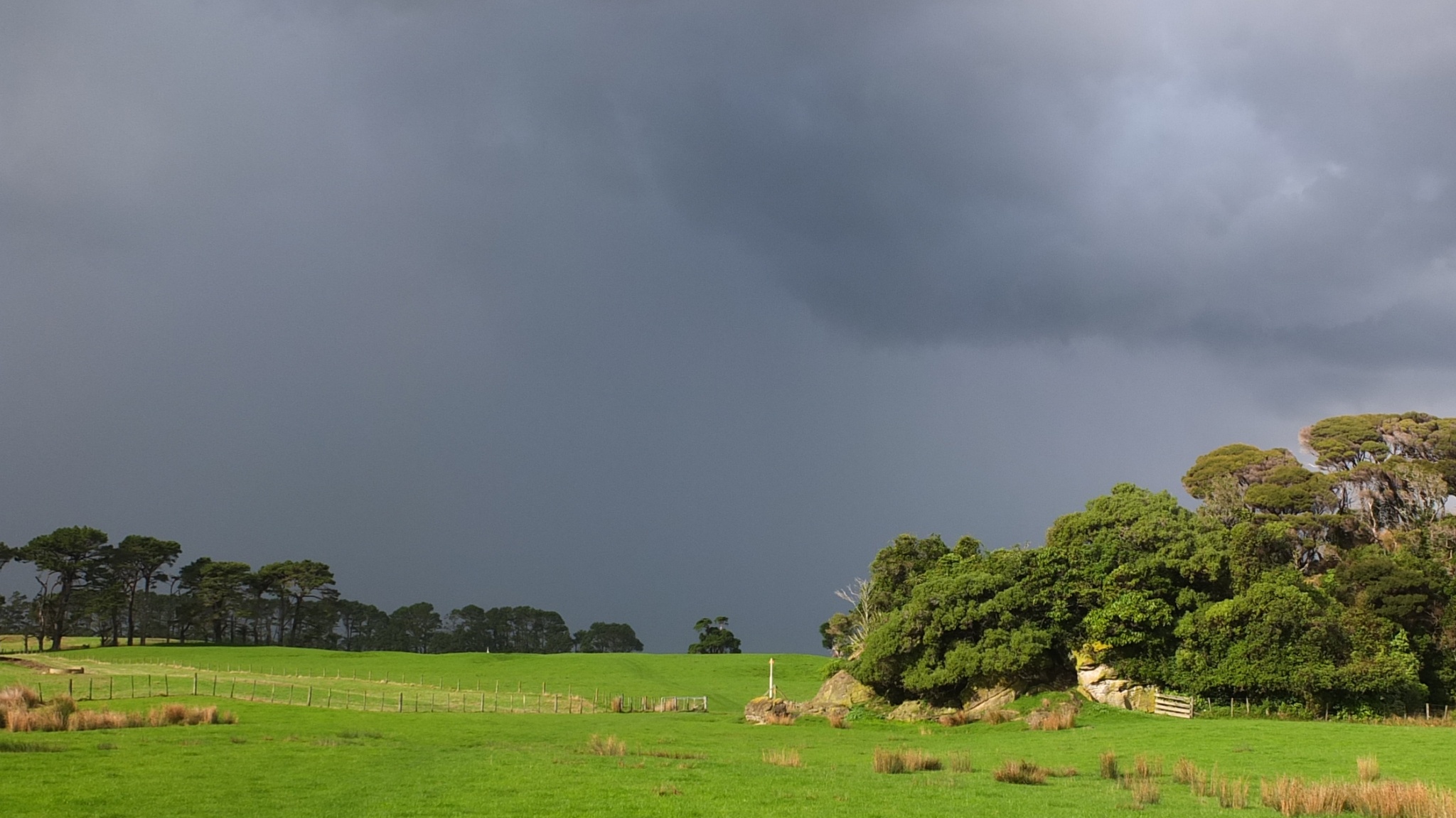 I was very VERY lucky since yesterday but the rain is here now. I’ve spent something like two weeks riding the west coast and I had 4 days of rain only. That was cool. This night and this morning the rain falls… I’m going to visit the top of south island and then heading southeast toward Picton where I will catch the ferry back to Wellington, if that rain stops of course… I think I’m going to sleep in a backpacker or a campsite tonight because I really need a shower, I mean, a total real hot shower! So I could change my clothes as well because I think I’ve got the same pants and T-shirt since…, yes since Fox glacier! Fiouuu! That’s not serious! Fortunately, I’m wearing merino! 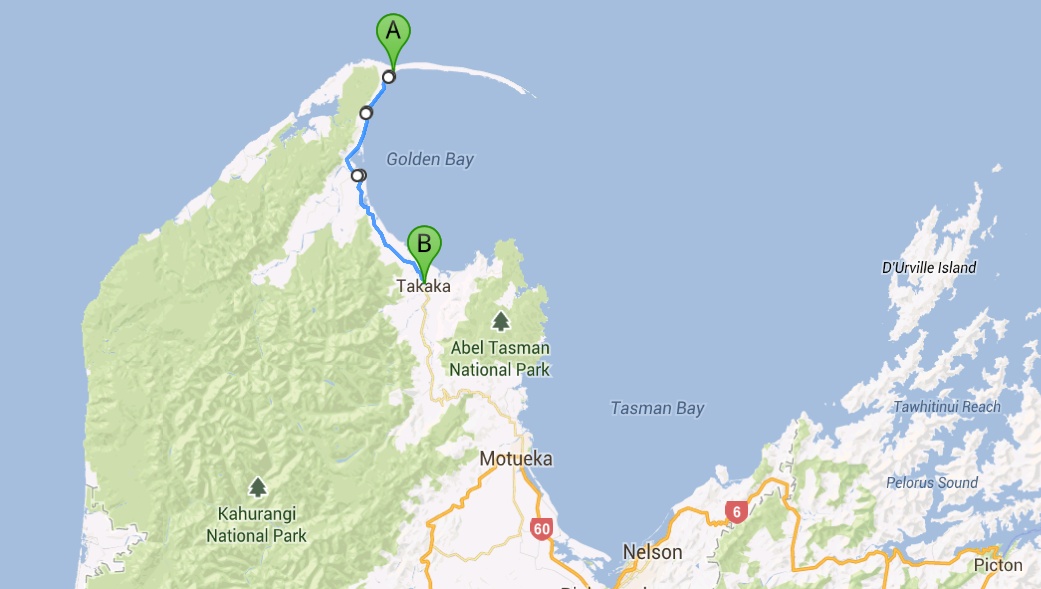 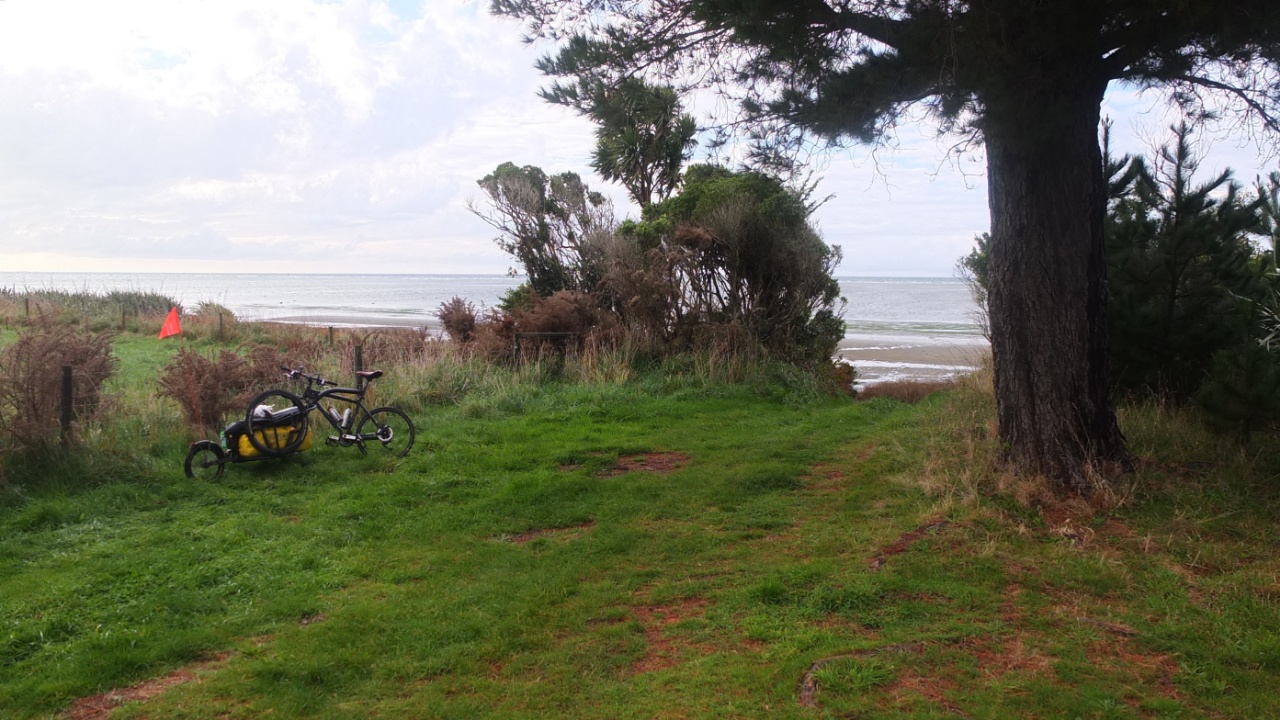 OK, it ‘s 9:30am now, finally the rain stopped or at least, it’s not as worse as this morning. I’ve just finished to pack my gears and I’m… not ready to go because I have a puncture… Why now?! I know I have another inner tube, I just hope I’ve repaired it last time. 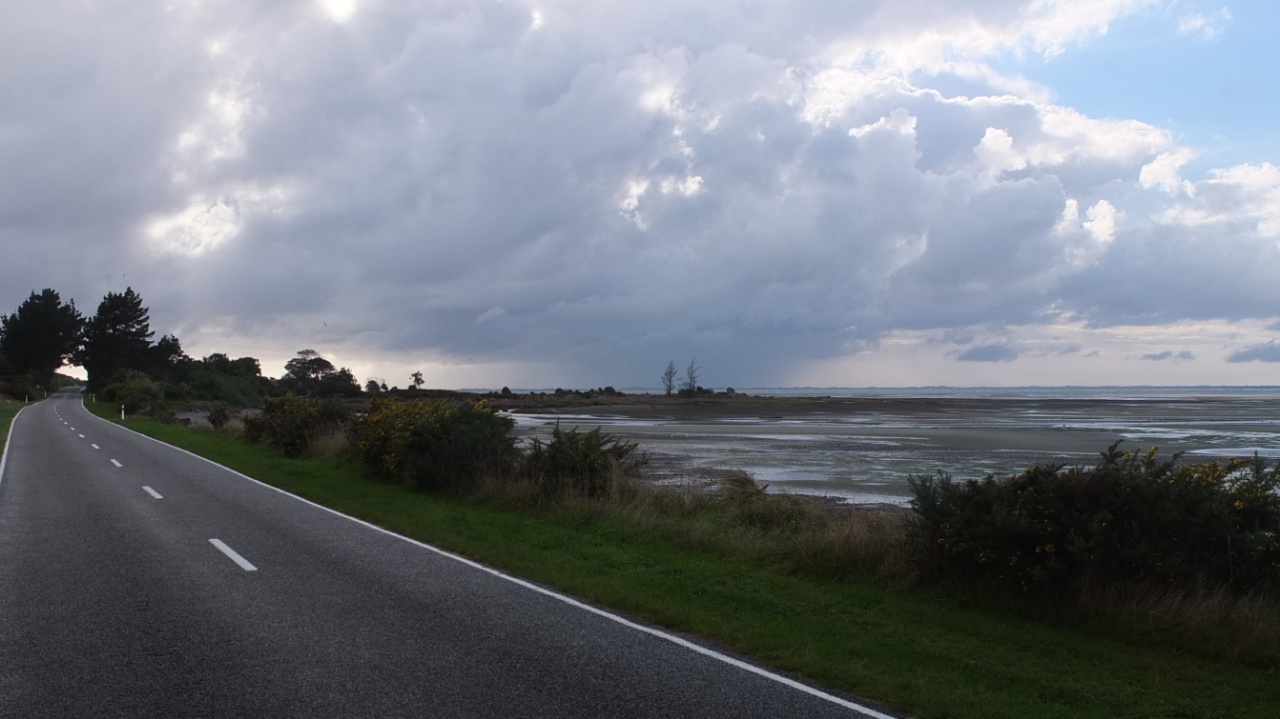 10:00am and I’m on the road toward the top of the top! I don’t like the dark area there. Looks like heavy rain… 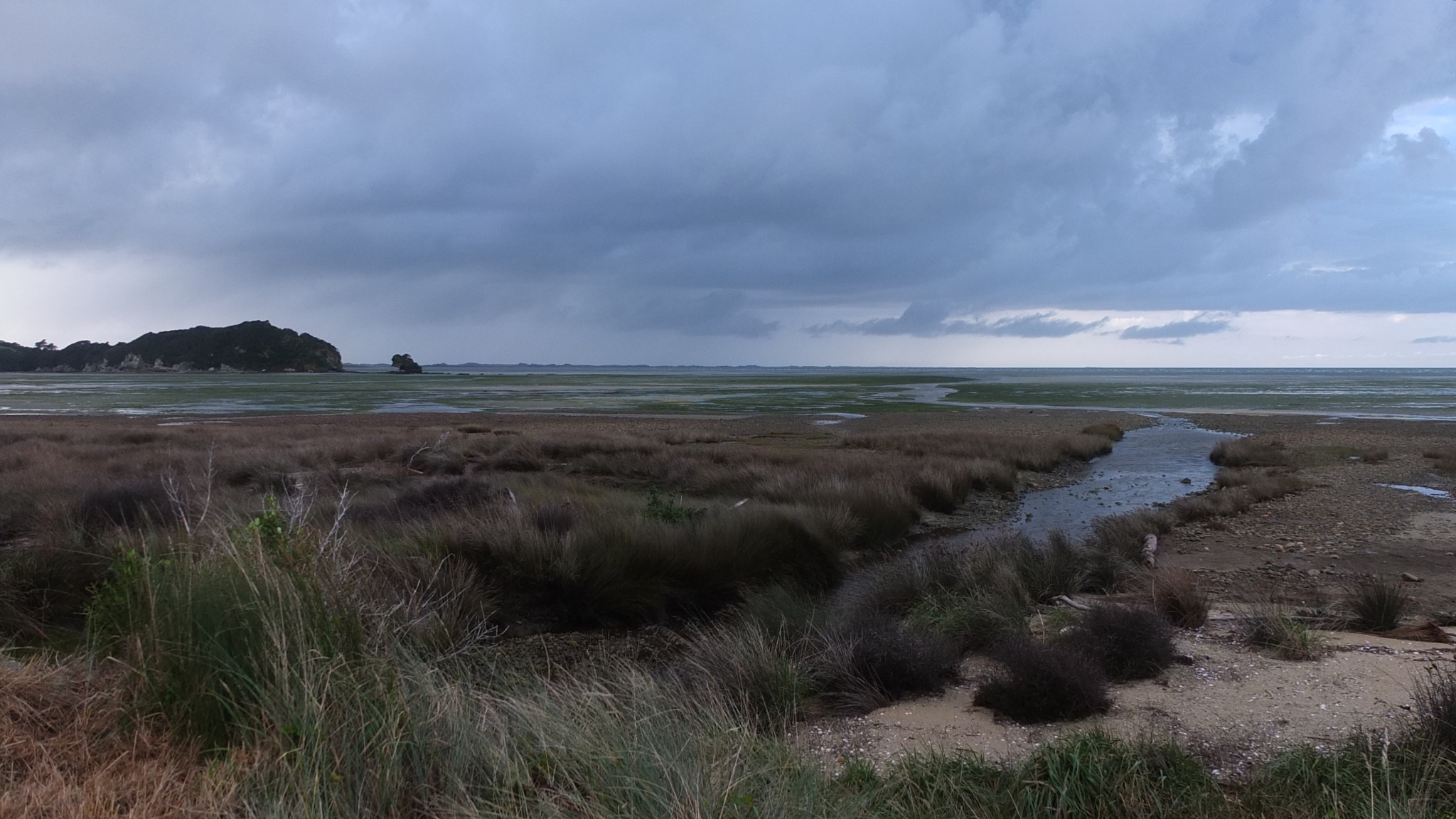 As the map shows it, the Farewell Spit is a long band of sand create by the sea currents. It’s distinguishable from here but I would like to get a bit closer. 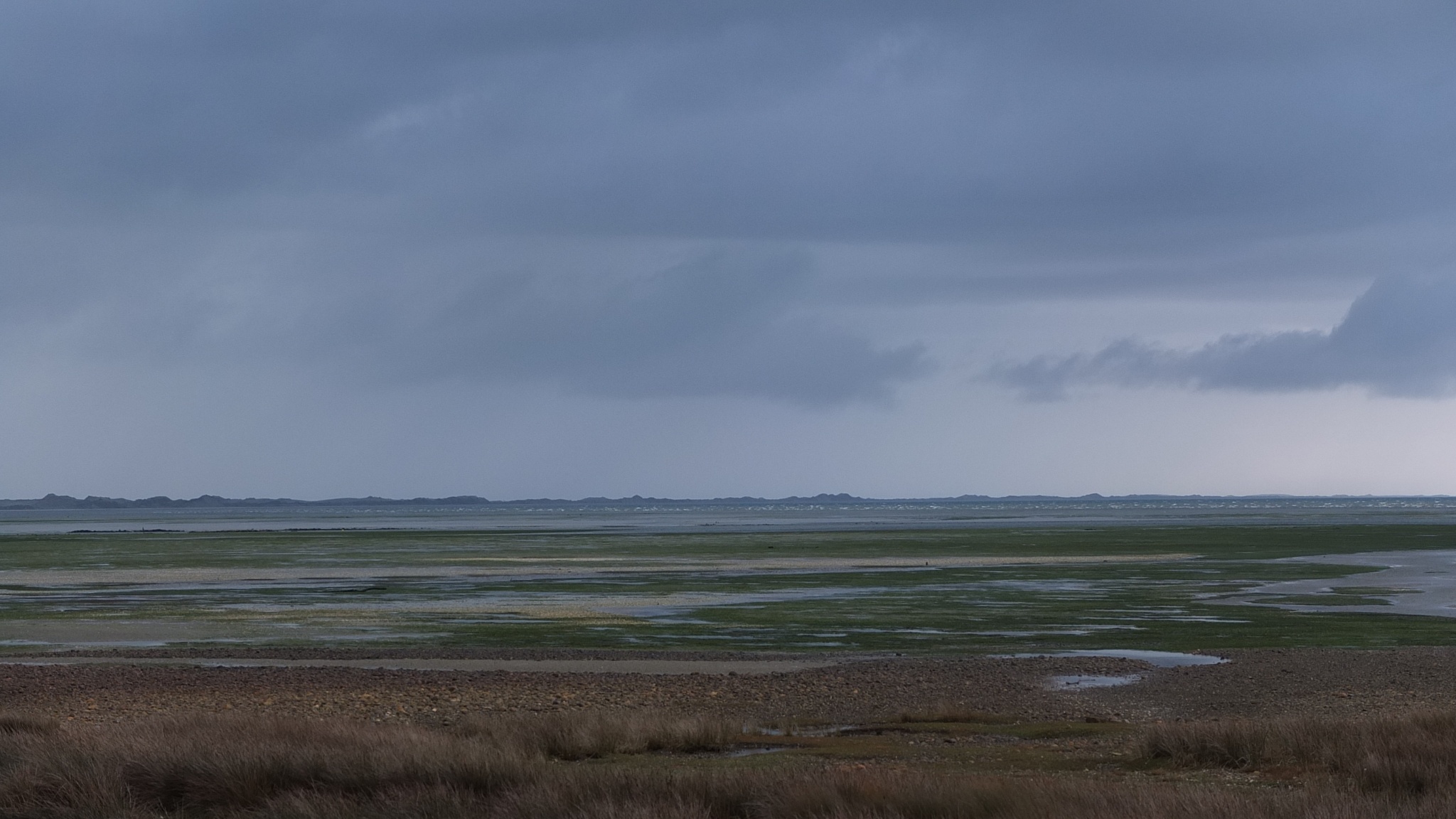 It s better by zoom but still far away :-) 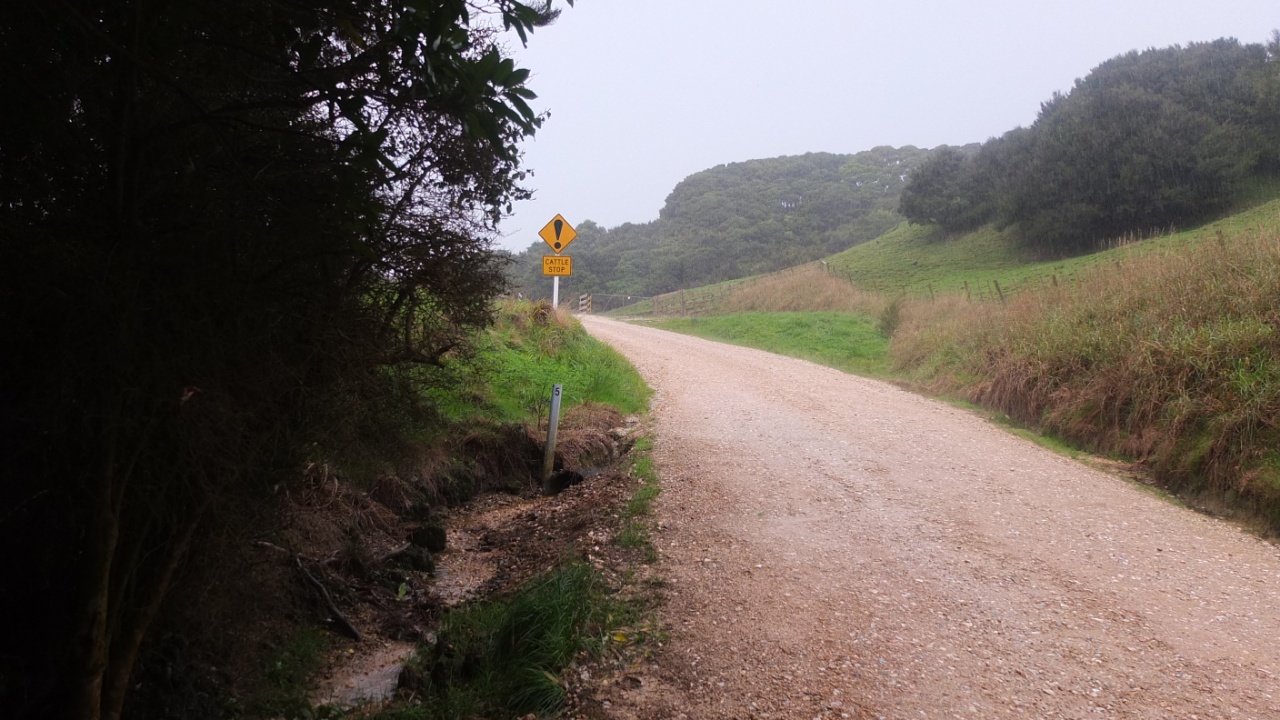 I’m not far from the car park but the heavy rain came back again. I’m waiting under some trees. The good weather left me, snif! 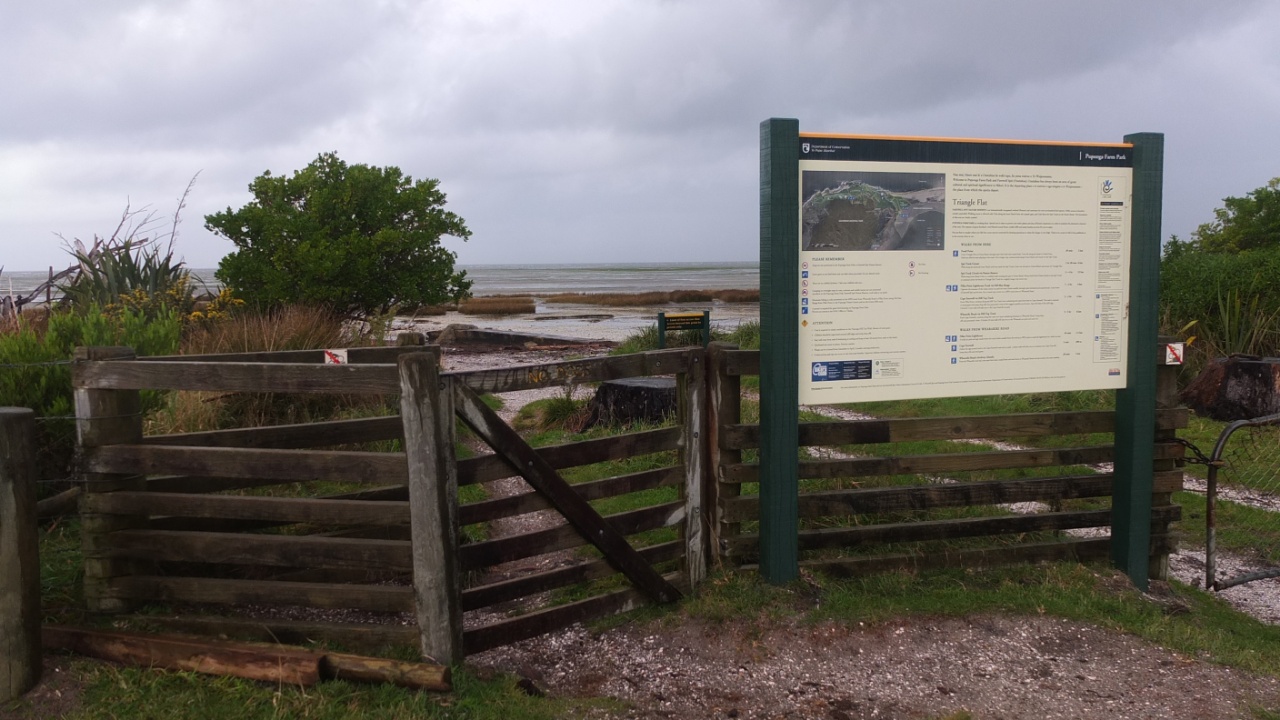 That’s the car park. From here there is different walks. Some short and some other longer. I don’t want to spend so much time because of the rain so I’m gonna do the shortest one to fossil point, 1h return.

Before, let’s have a look the Farewell Spit. It’s still far!

so, I’m on the track. It pass through land, between sheep, cows and birds. Hmmm, what these clouds look so angry? Dark? Full of water? I wanted a shower? I’m going to have one for free in few minutes! Rah! I forgot my shower gel! 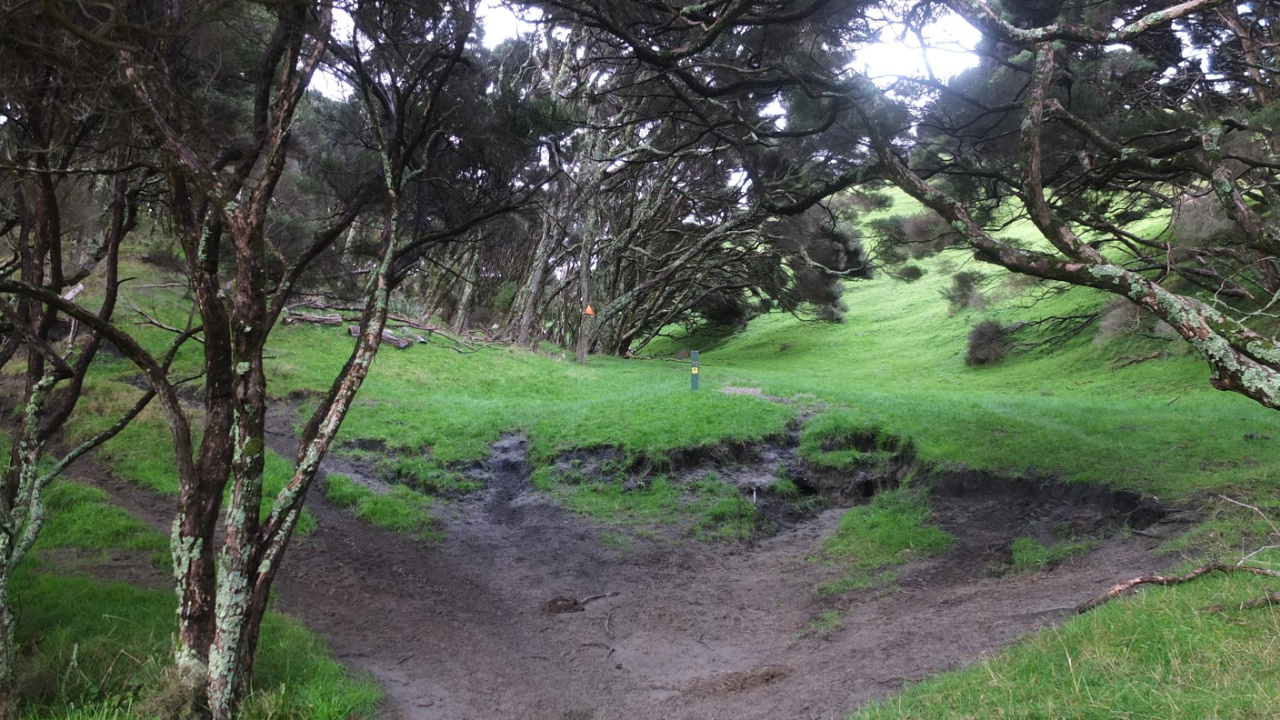 Never mind, I’m here now and I will continue walking until the point :-)

?!!! Pei-ru? You? Here? Whouaaa! What a surprise! On the top of the top of south island Pei-ru is here with a friend she met yesterday. I worked together in Alexandra 2 month ago and now we are on the same place here. There is nobody else! 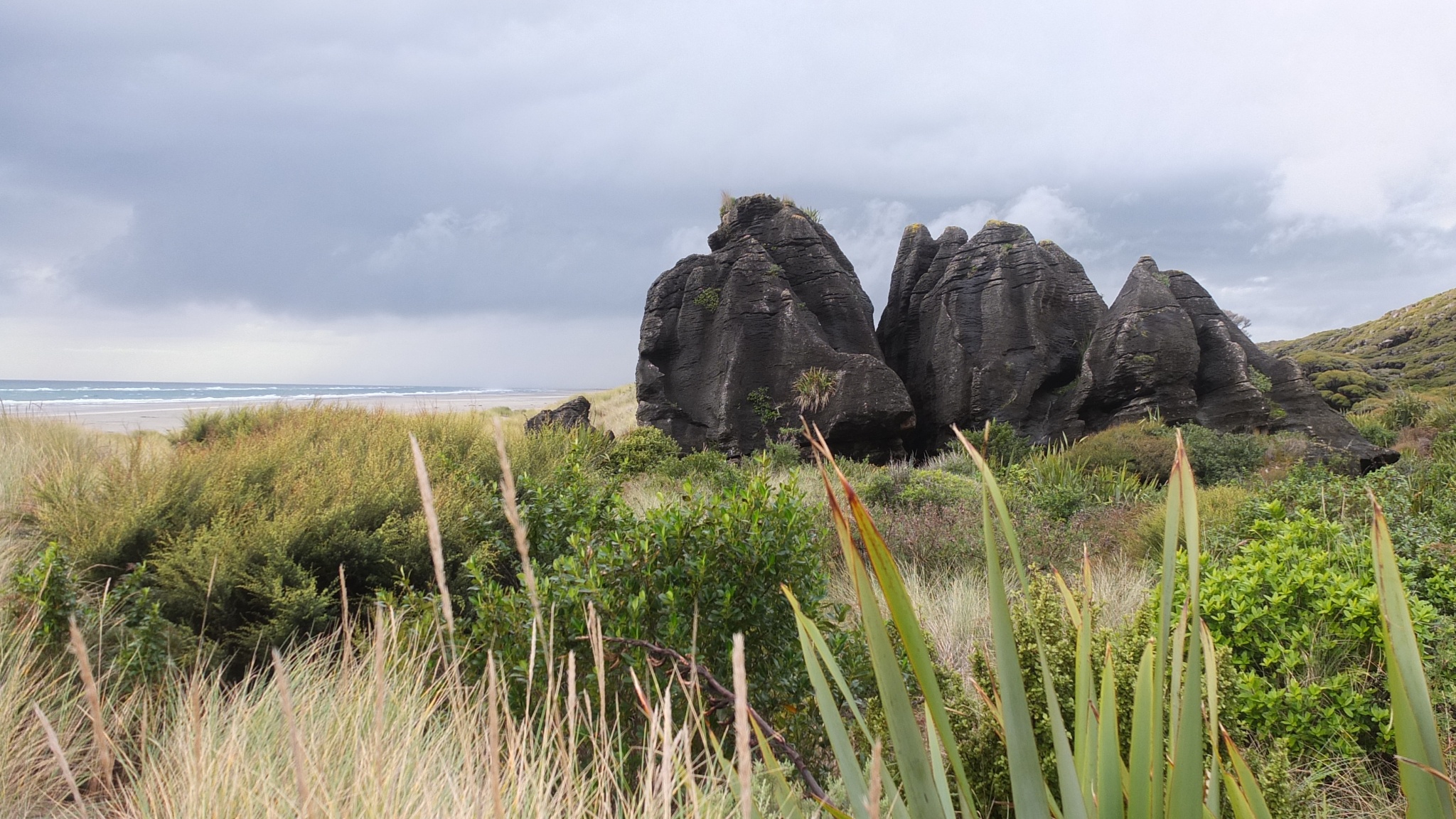 Like when I met “J-me the artist”, she was going back to the car park when I’ve didn’t see the Fossil point yet. So we said good bye and see you later maybe :-) Is NZ small or am I Lucy? 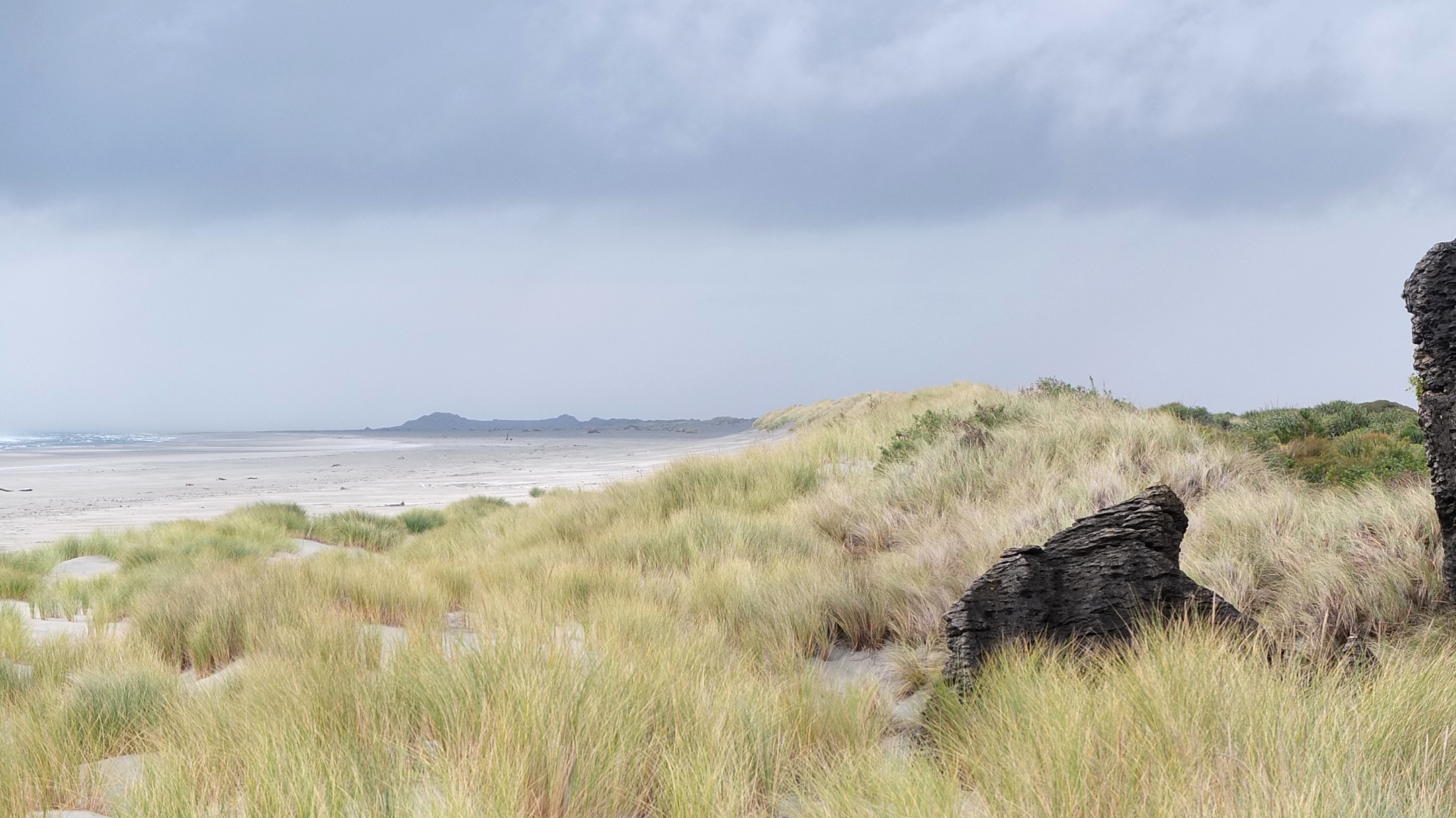 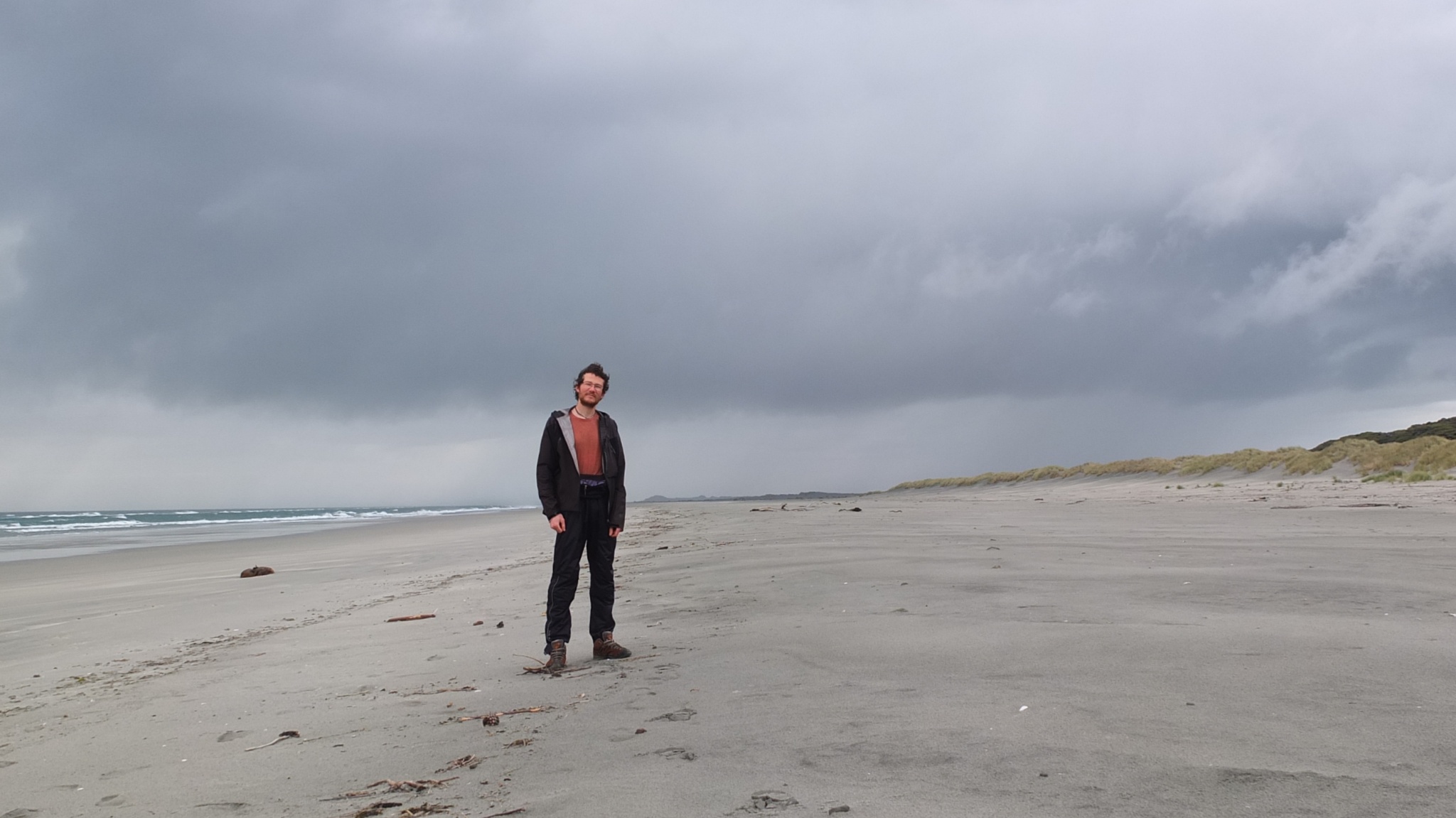 Fouah! What a style I have with my rainy pants under my chin and my dirty hair… haha :-) 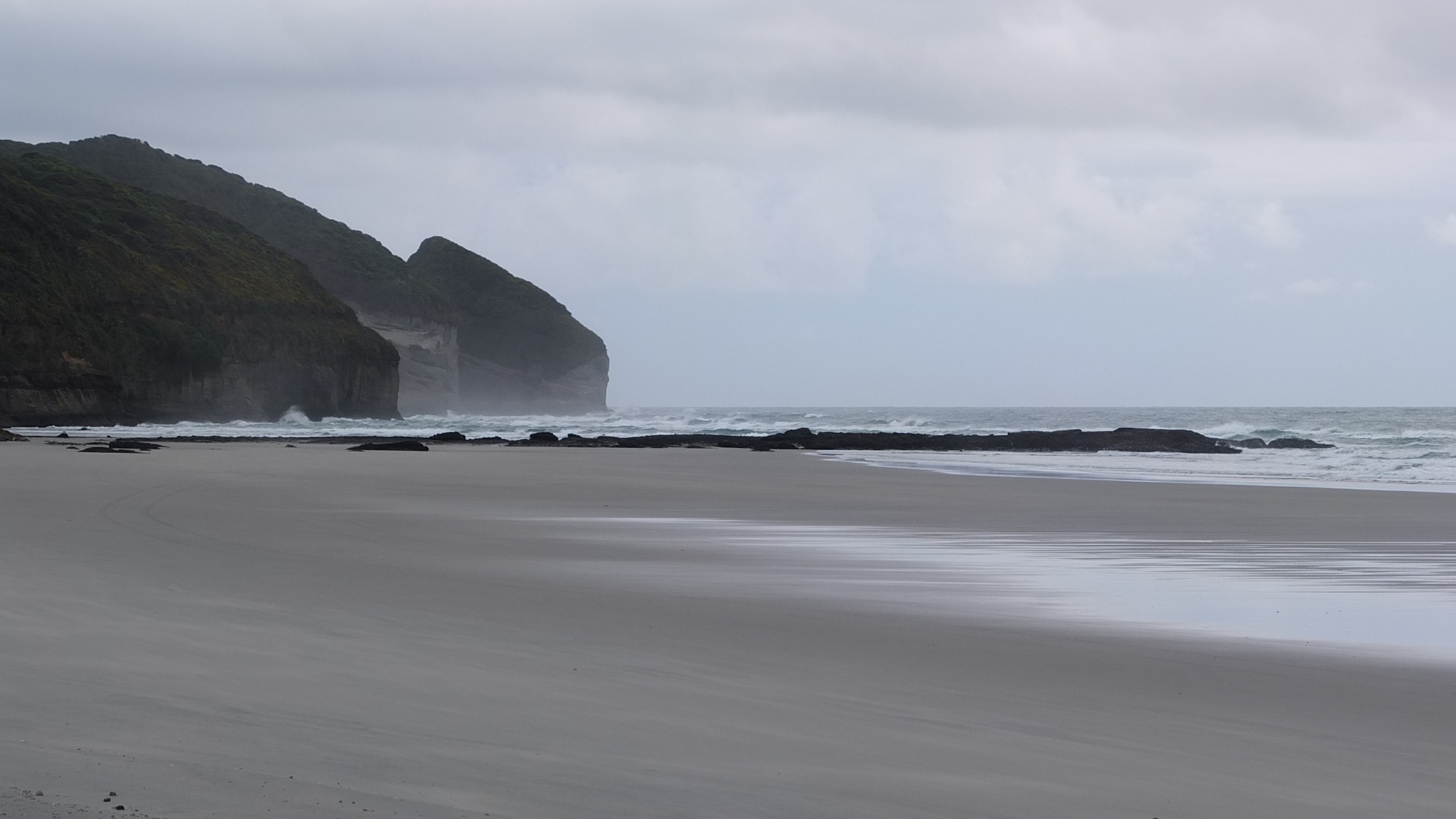 Looking toward the west.

And the rain came back again! I walked fast toward the car park where I’ve met Pei-ru one more time :-). After this good surprise, I rode back to Collingwood because this morning, when I was repairing my wheel, I’ve realised that yesterday, when I was changing my tires (to put my road tires back) I’ve forgot on the ground my caps (for the wheels). I was so angry to myself this morning and I know exactly where are they.
One hour later, arrived in Collingwood, I rushed to the place and there was nothing, rah! Somebody took them! I turned around looking on the ground, everywhere when a man yielded me. I came to me with a big smile and told me ” open your hand” I did it and he gave me two caps but one of them wasn’t mine. I said “oooh, thank you but there is only one, did you find one only? The old man looked in my hand and said “oh sorry I took the wrong one :-) ” Cool! I’ve got my caps again :-). Fiou!
After that I ate my lunch and by some more ships because I was still hungry. Then I left Collingwood behind me to reach Takaka before 4 pm. 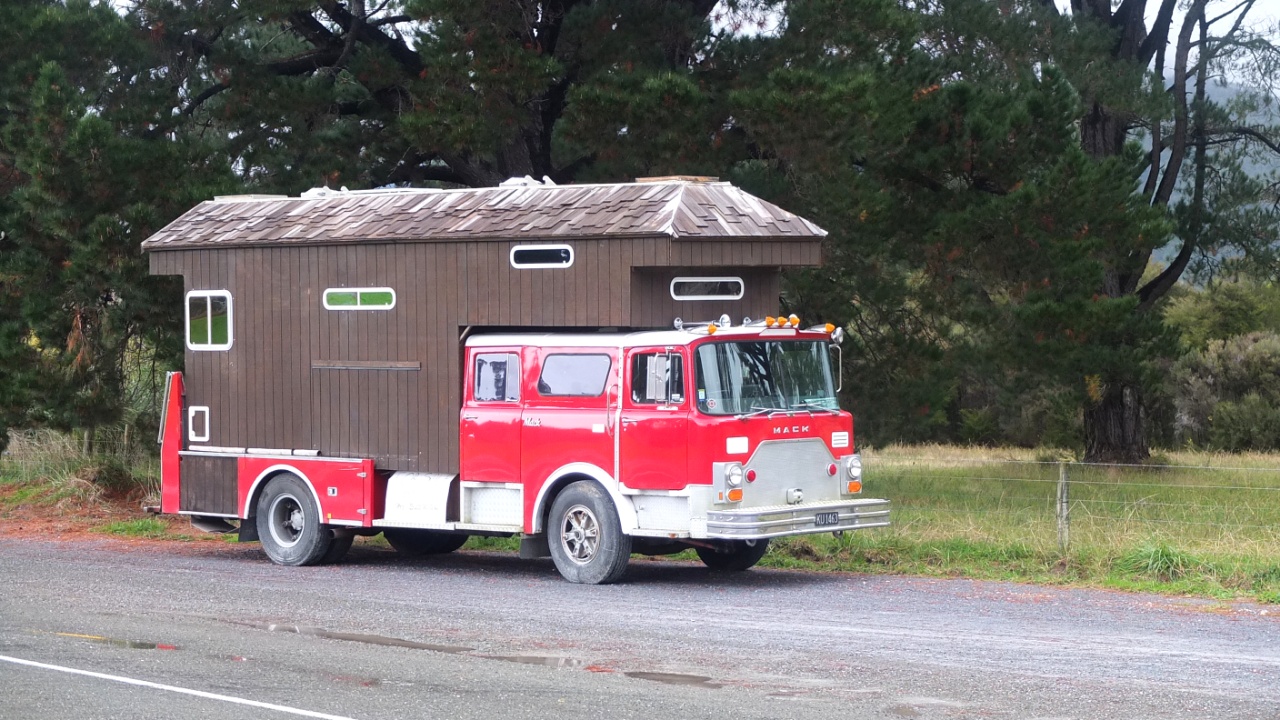 So, I’m now almost arrived and there was nothing special during my trip. Just that strange camping car made with an old fire man truck. Original :-) 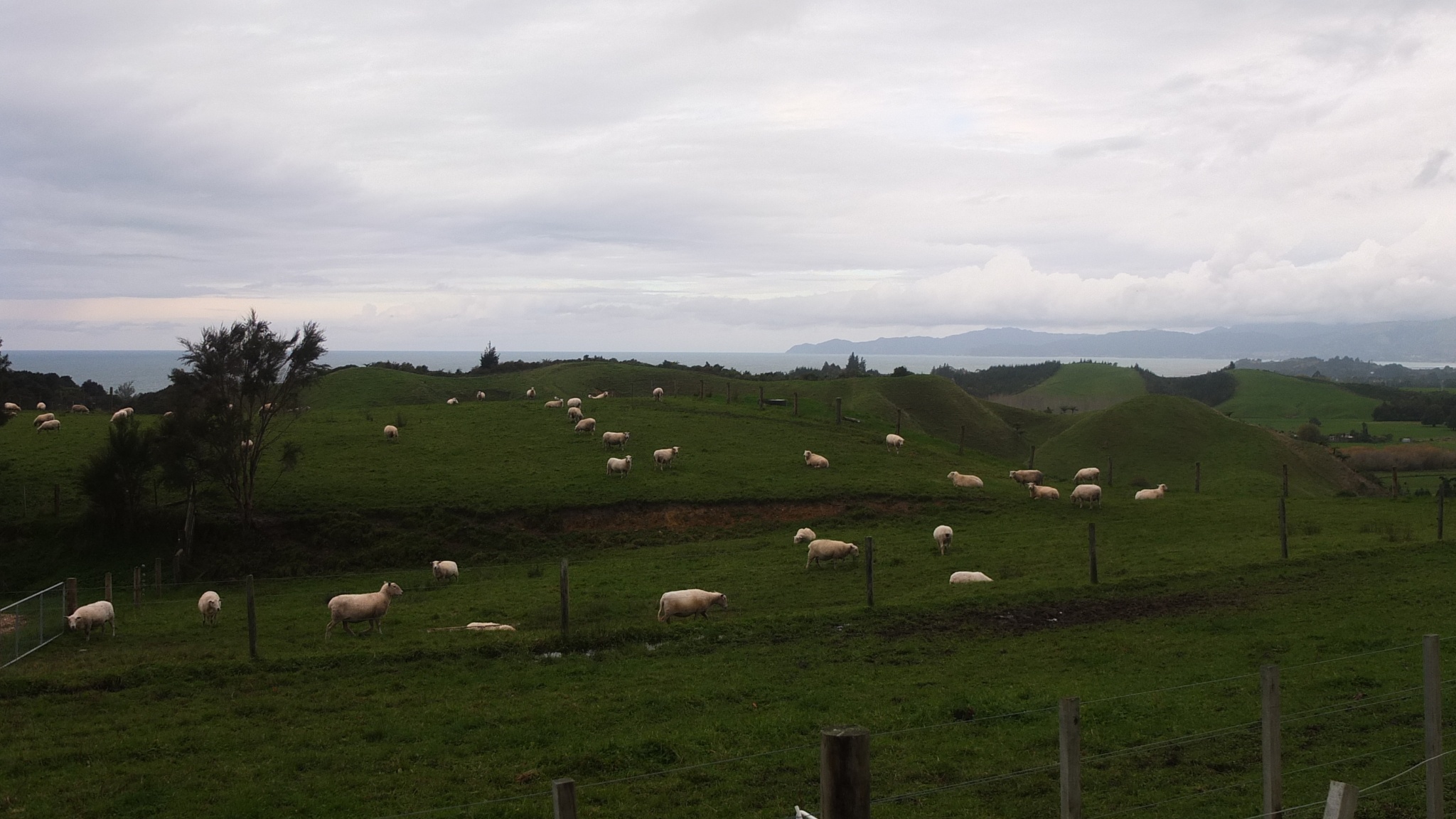 I’ve finally reach Takaka where I found a campsite. Since 5pm and until now (21:30 pm) it’s raining but RAINING! I’m not in my tent because I found a place where I can charge the Dene’s tablet and all my electronic stuff but I’m a bit worried about tonight. I had a very good hot shower and I’m gonna have a cold bath this night… Gloups! See you tomorrow, maybe… :-$