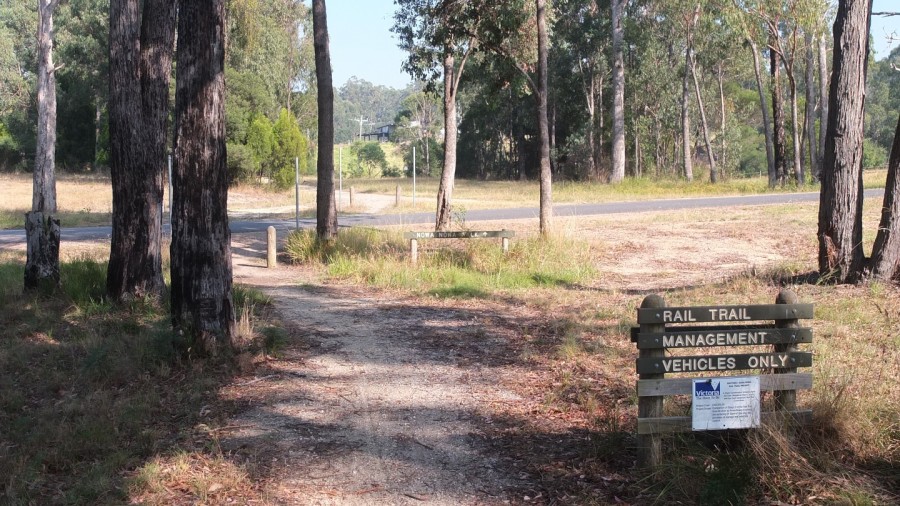 Okay, this is one more day added to my trip to Darwin. Everytime I meet someone and that person ask me where I’m going he/she repeats after me: Darwin!? Yes Darwin, the one on the top :-) At this time I feel I did not start yet but since few days I’m closer to Melbourne than Sydney and I can call this progress! Normally, I’m done with the hilly part of Australia, the rest of the road should be generally flat all the way. But we never know! 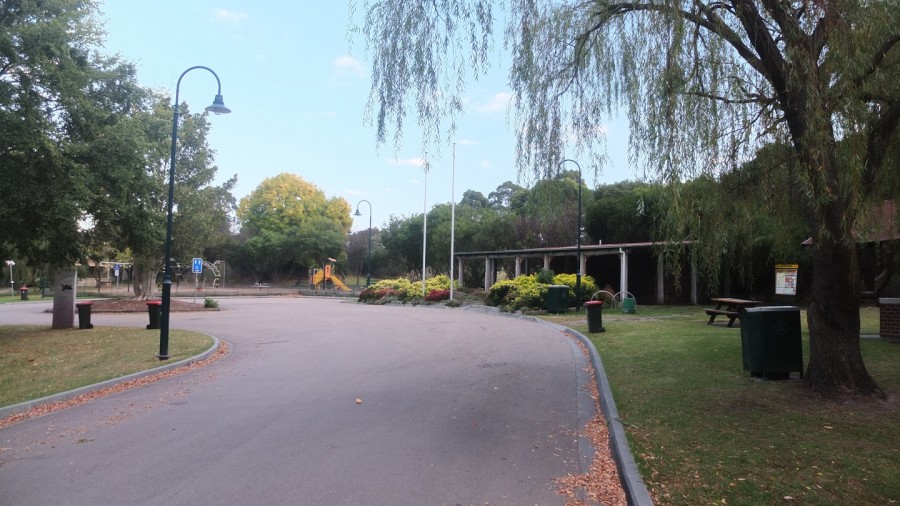 I left my “campsite” which was good apart a bloody dog who was barking to me every 2h. I think he was afroad and came to verify if I was still here. I don’t know where he was. In a garden? Free? I never came really close. 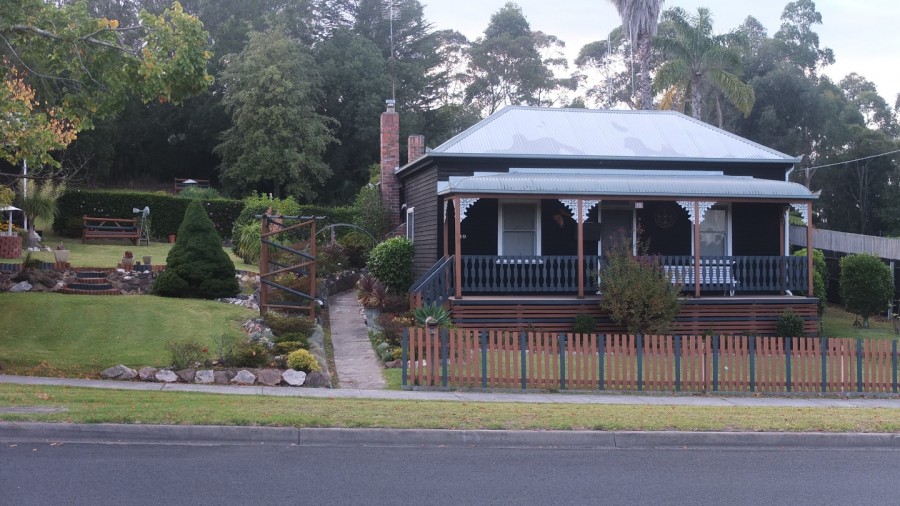 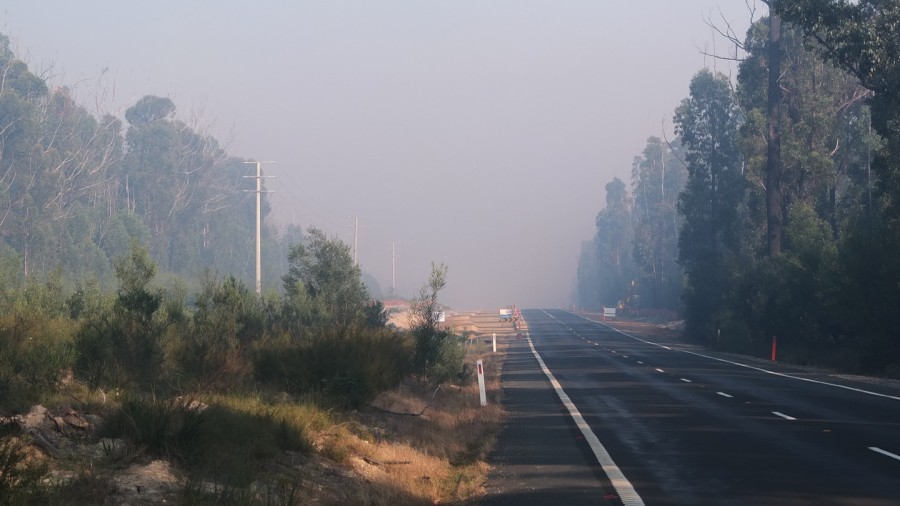 Houuu, since few kilometers there is a smell of fire. I don’t know if it’s a serious one and were it’s coming from but we don’t see really far. 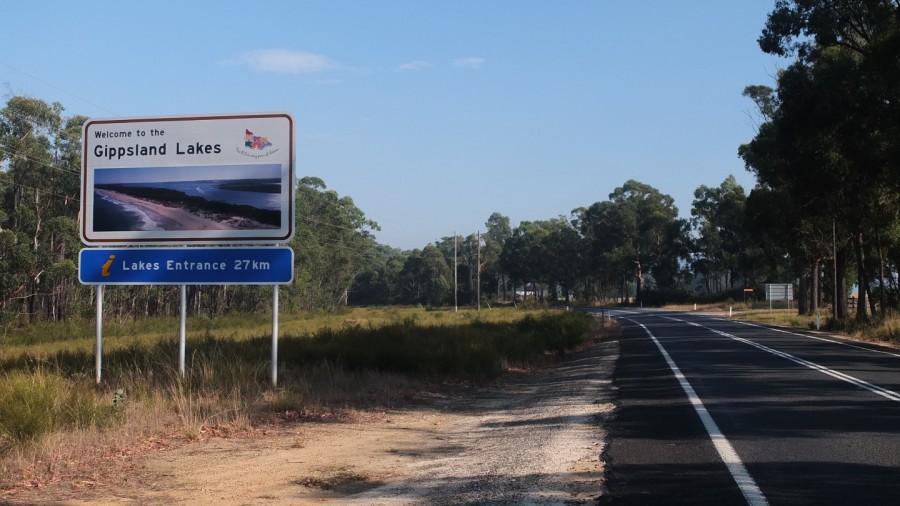 After 32km in about 2h, I’ve stopped next to a petroleum station where there was some activity. Some people were selling food to help the “fire men organization”, something like that. I could not resist and bought a bacon and egg sandwich. Then I was talking with a guy and he told me I could reach from here the rail trail which goes all the way to Bairndale. Good! I’ve seen that on the map in Orbost but did not find the entrance. Now I know :-) 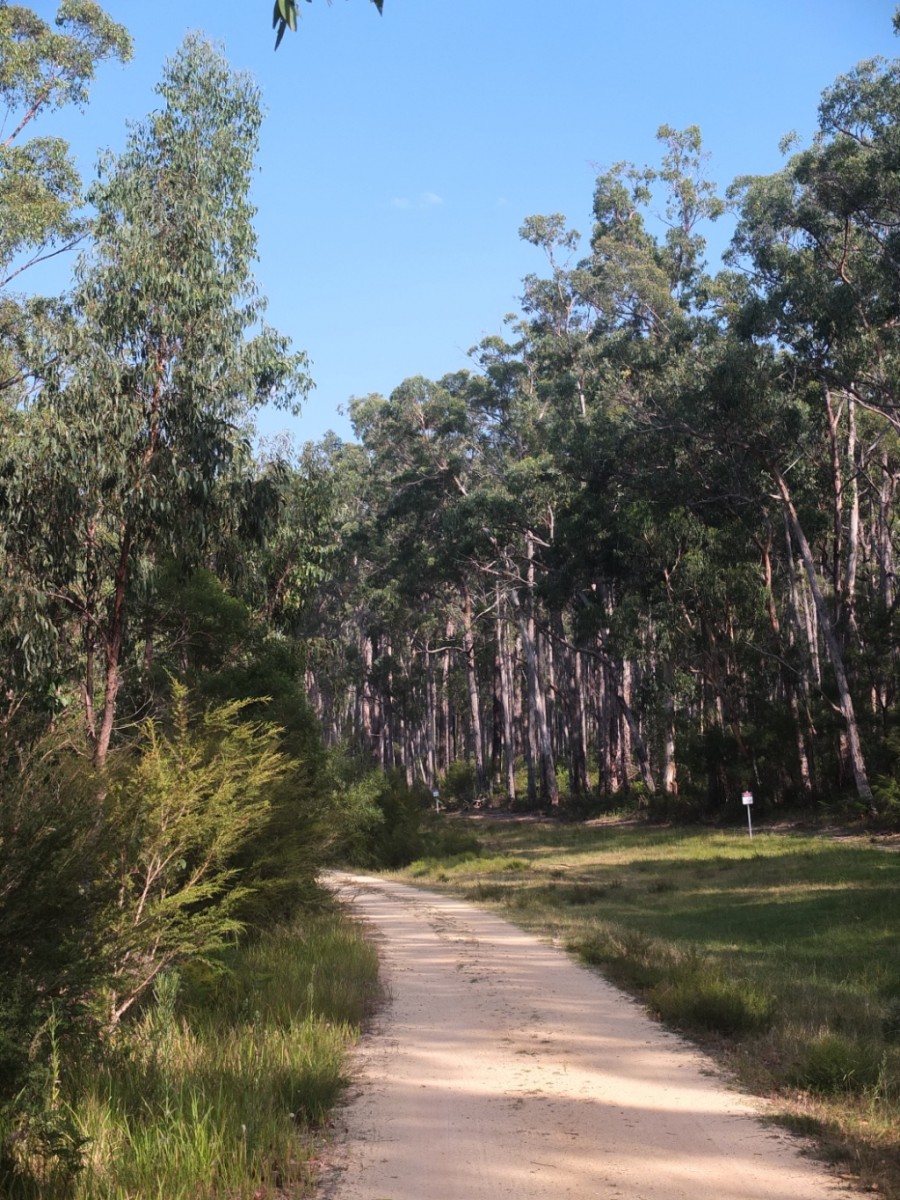 This morning the highway was quiet so it wasn’t really annoying to cycle on. And I was fast as well. Now, 10am, I’m happy to be on that trail. No cars, no noise, no pollution, good :-) 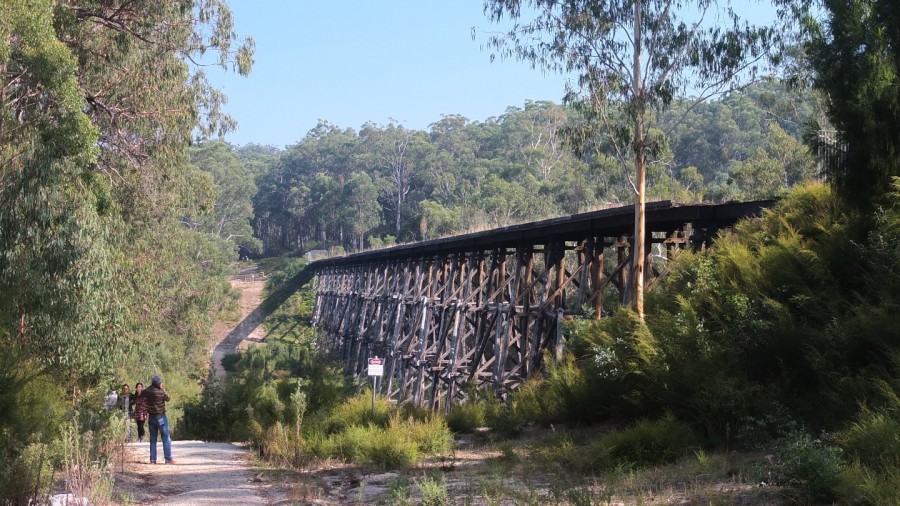 This bridge is close for the public now bit used tu be use by trains before. 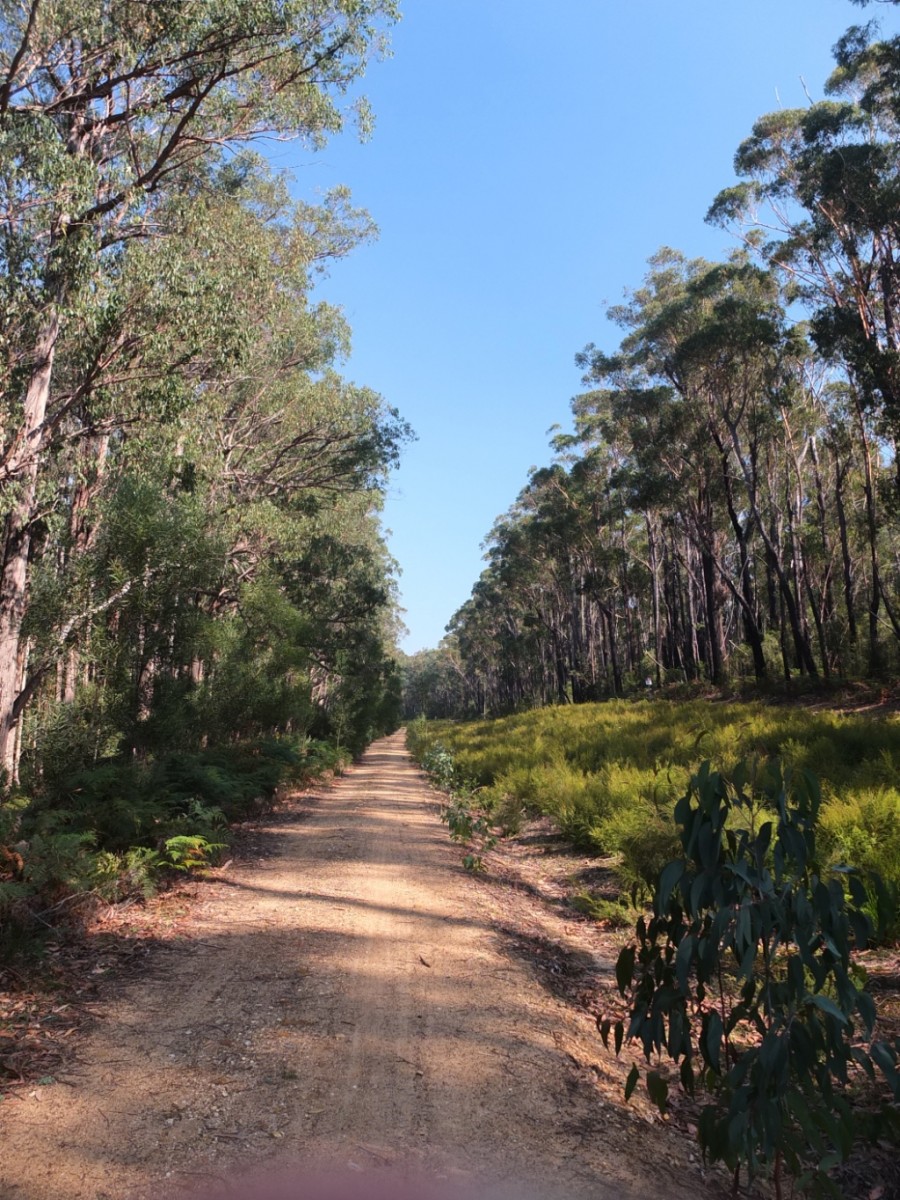 Video of the track. 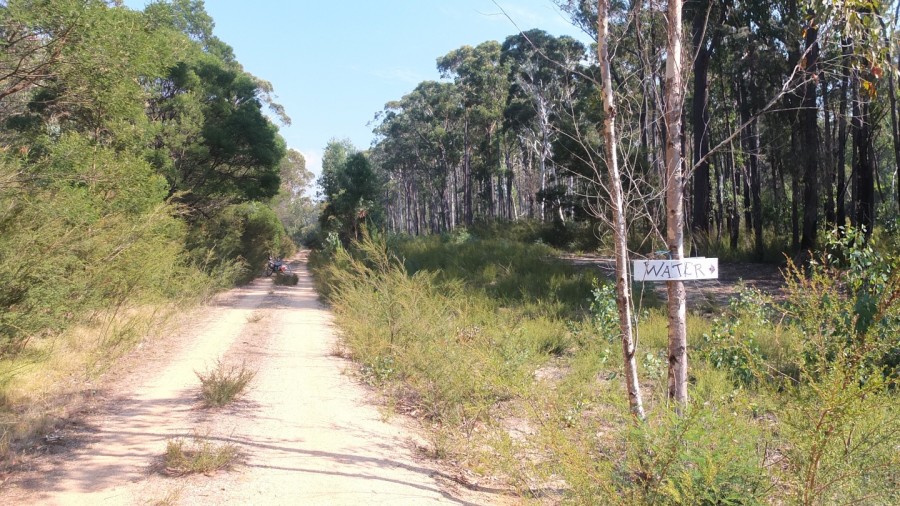 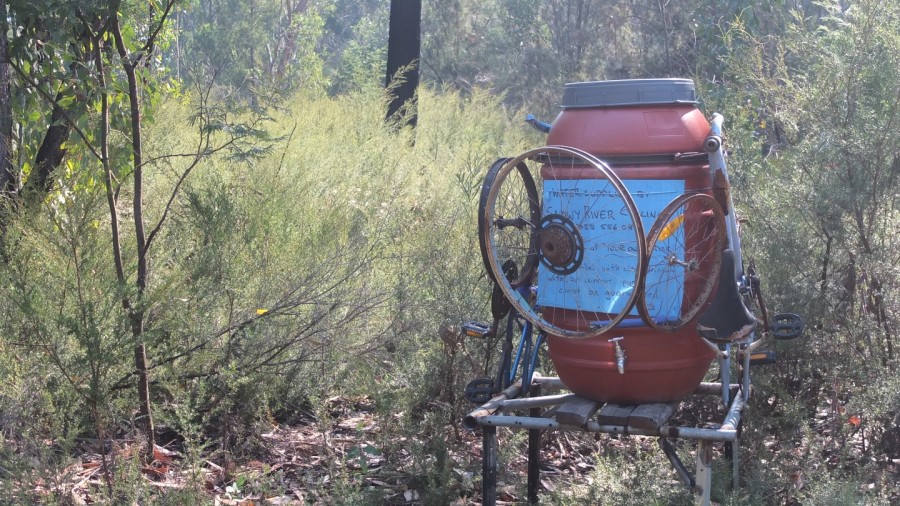 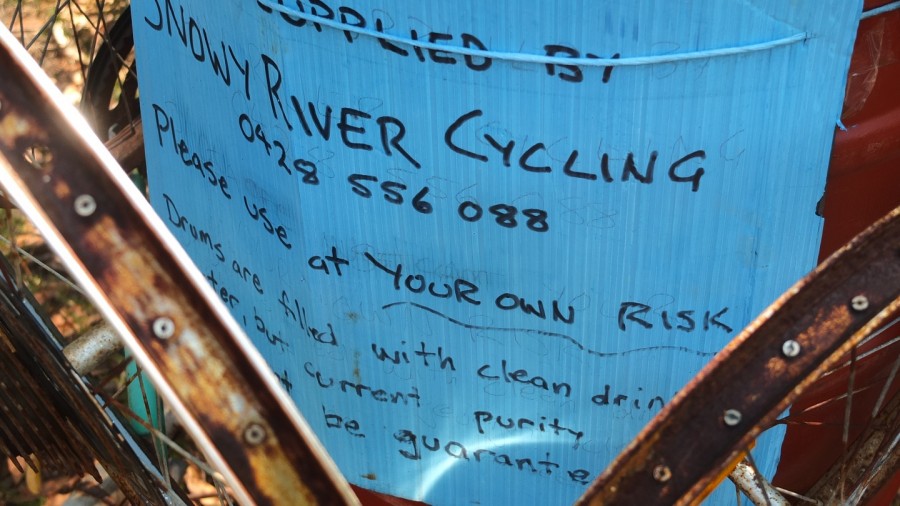 ok, I’ve got enough with me, I won’t try this water. 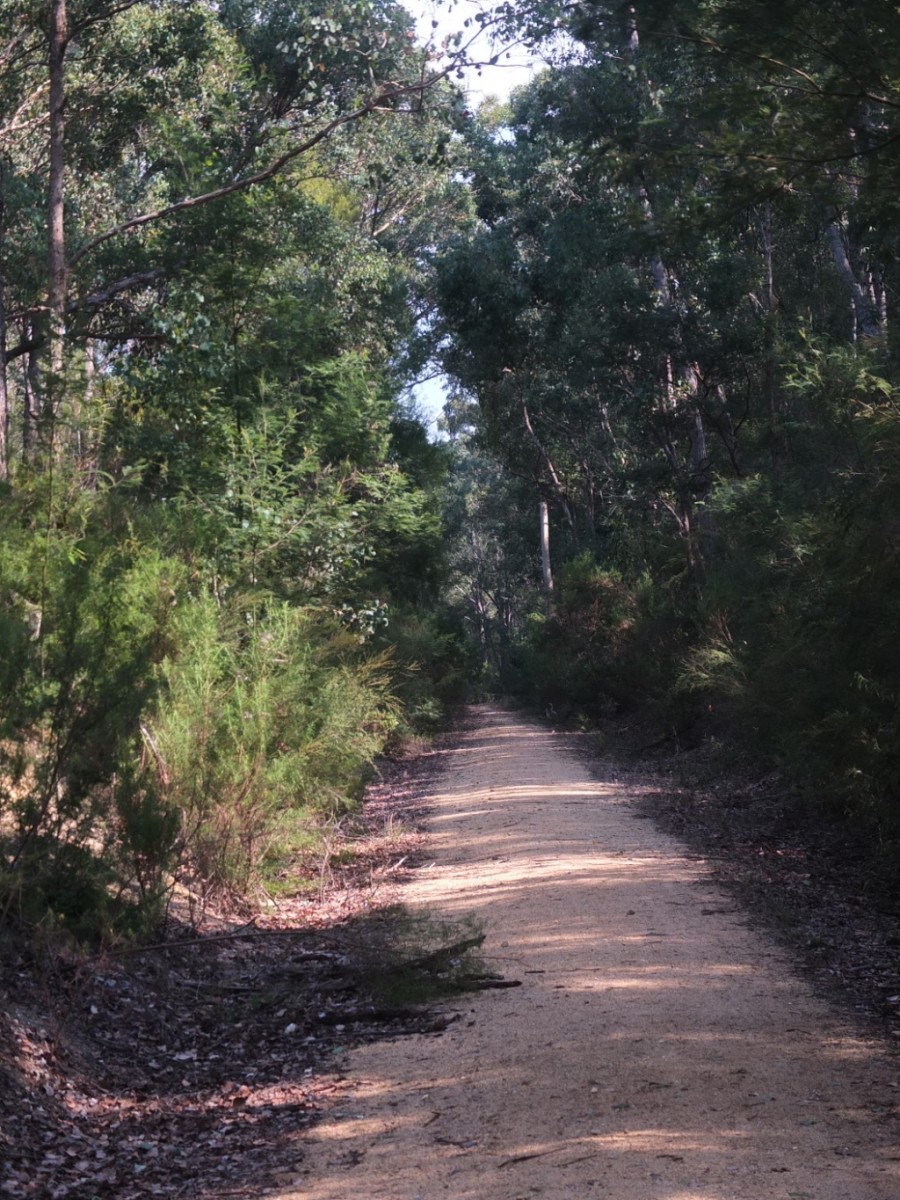 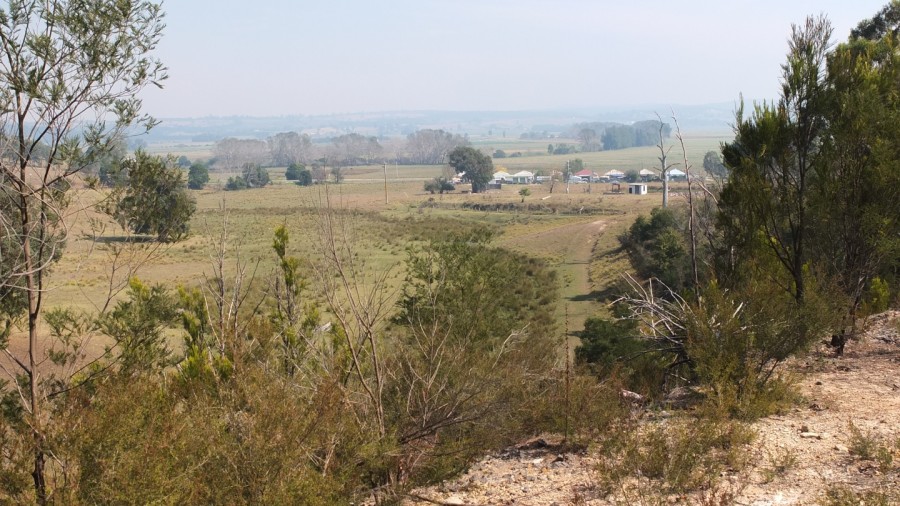 Finally, there is some kind of view on that trail… 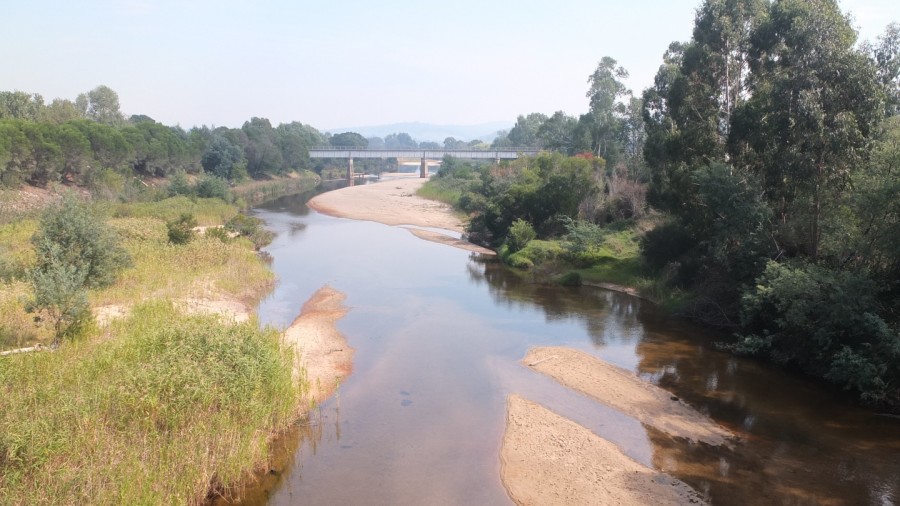 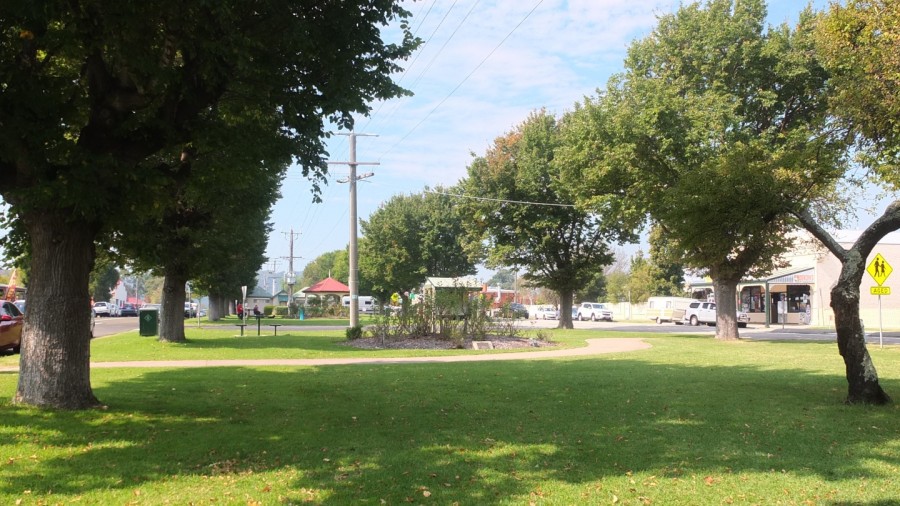 I arrived in Bruthen, cute touristic small town. It’s 1pm so many people having lunch now. Lucky I found a bench under the shade for cooking my pasta :-) 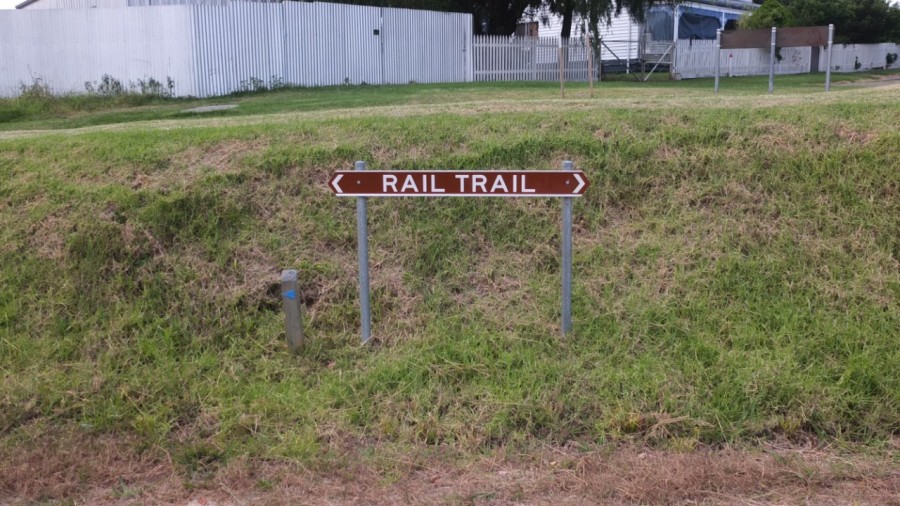 afteran hour or two of break I’m on the trail again. I would like to arrive in Bairnsdale this late afternoon and maybe continue a bit further. 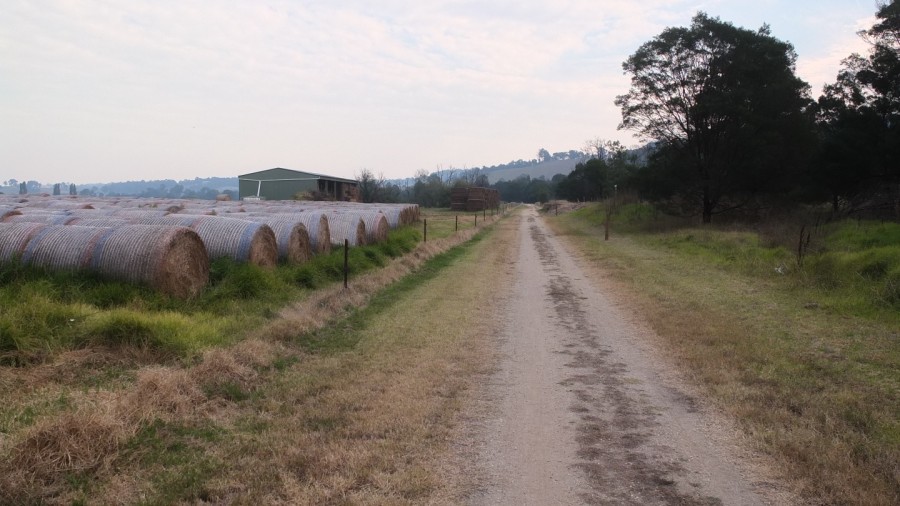 This part of the trail is more open and we can see, cows, hills, valley, etc 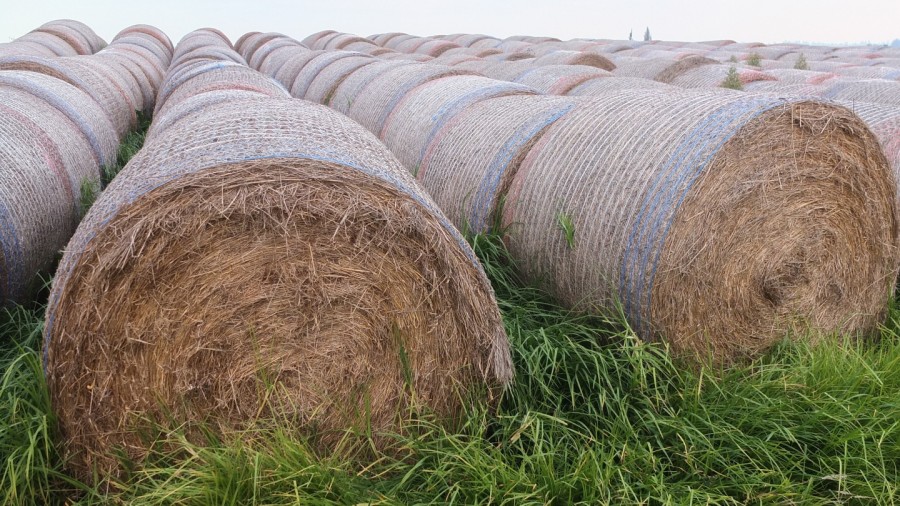 Some big bale of straw. 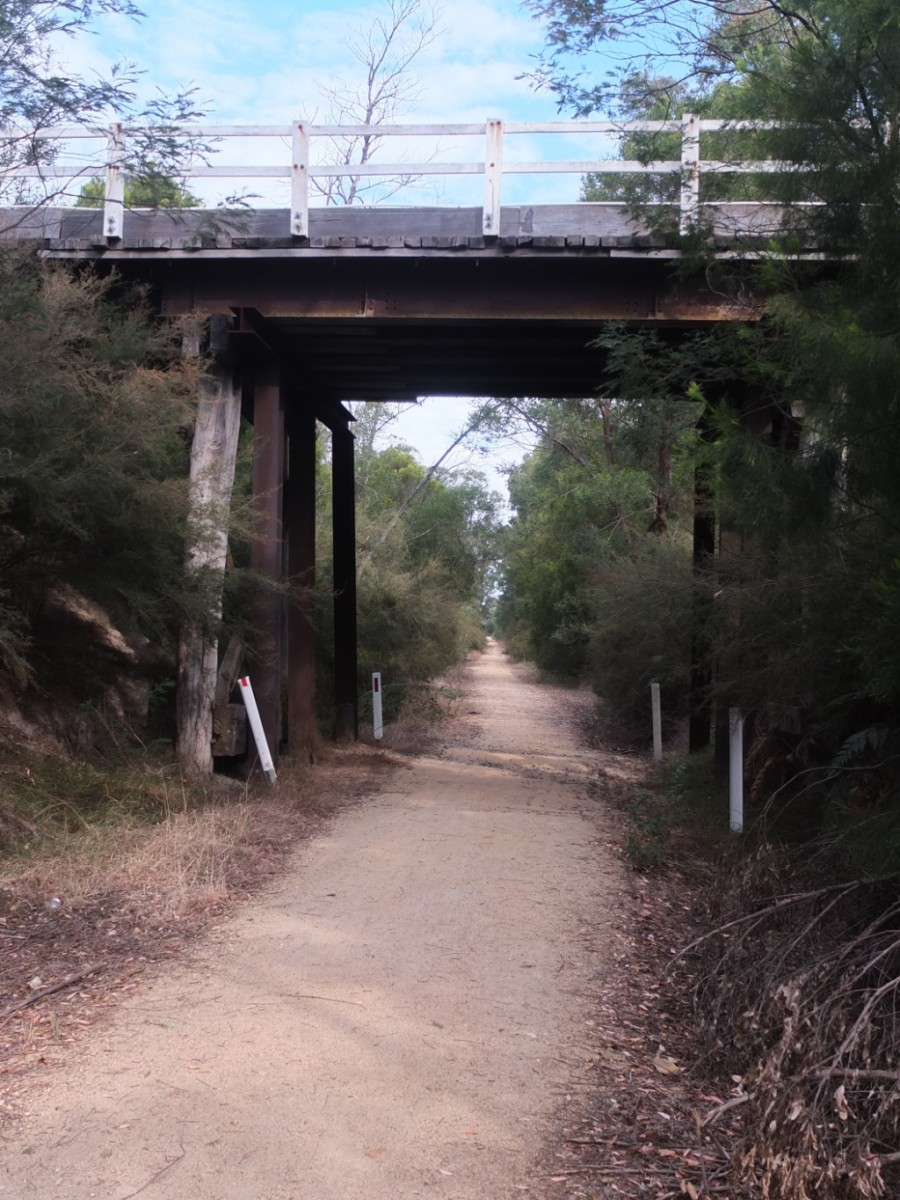 The track is repetitive but there is some obstacle which revive the monotony of it. 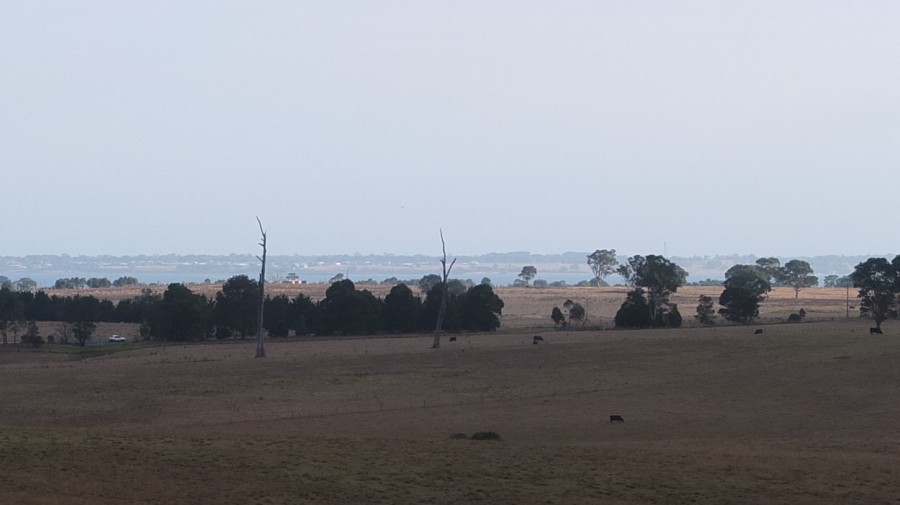 Aaah, finally, far away, I can see the ocean.

Ouuuh, I was lucky until here but looks like rain is coming… 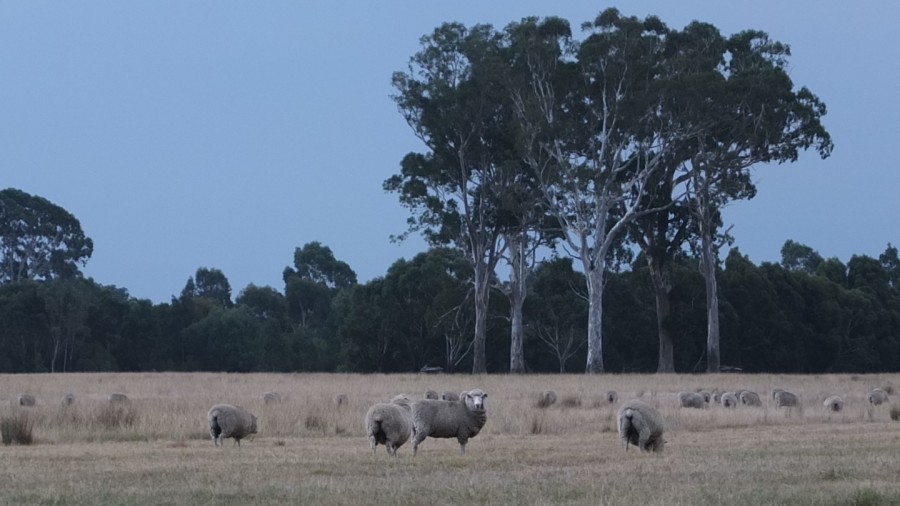 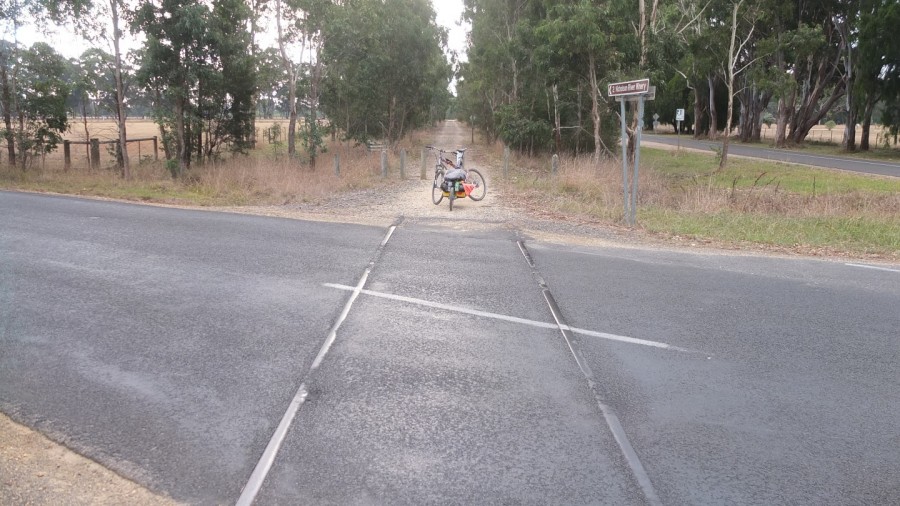 There is a lot of road crossing along the trail and this is the only moment you can realize there was a train before here. 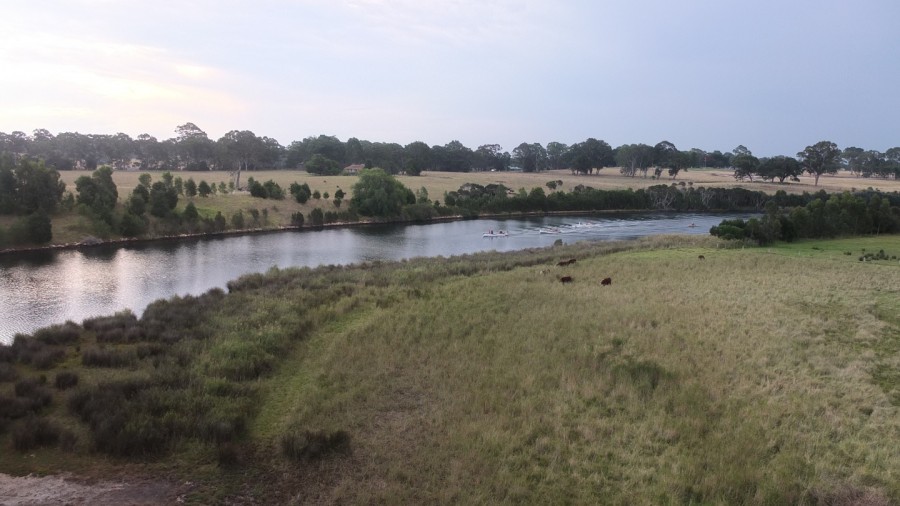 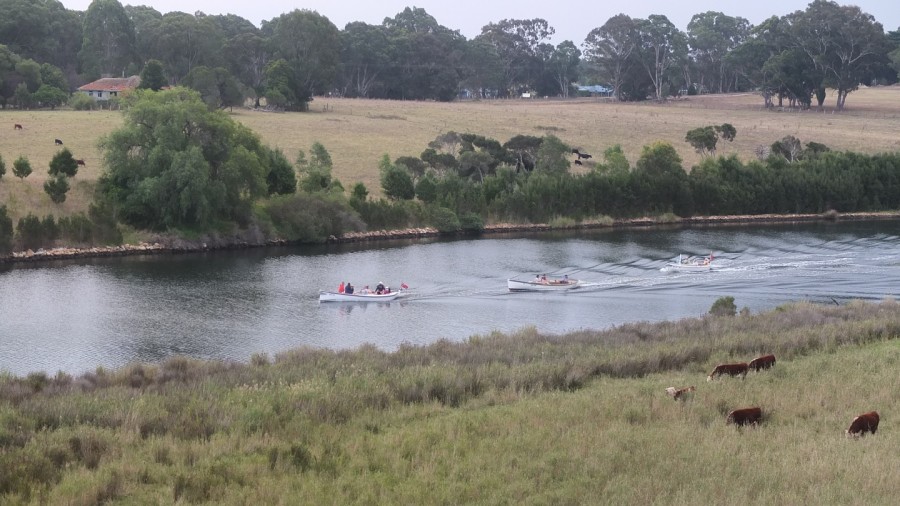 This is the Nicholson river. 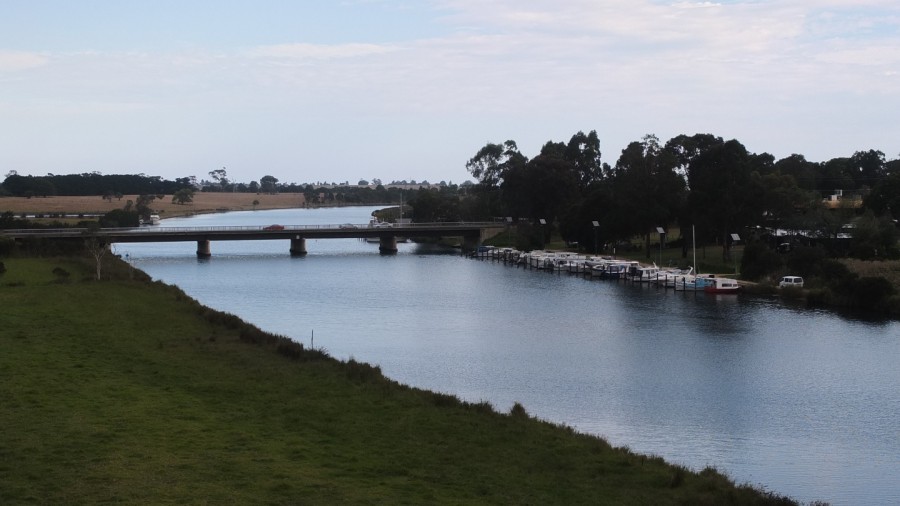 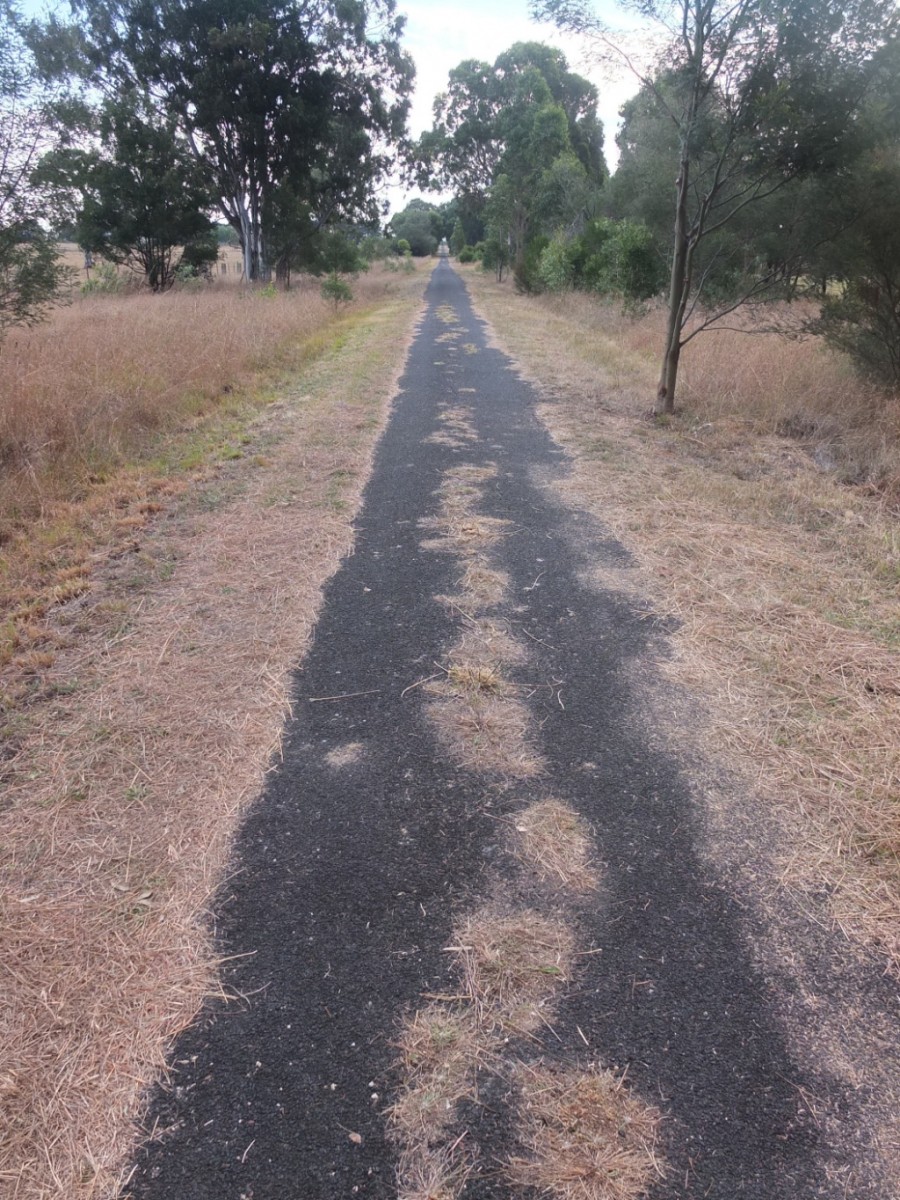 Few, that is straight and endless. 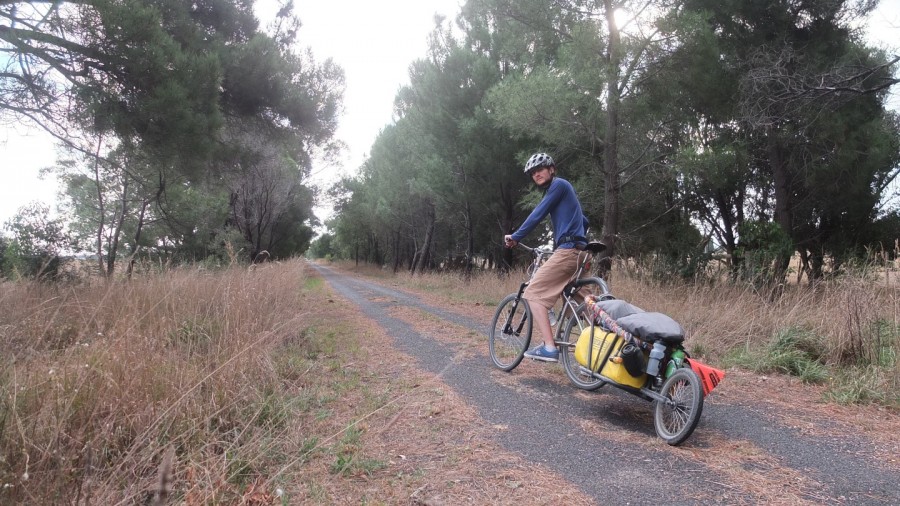 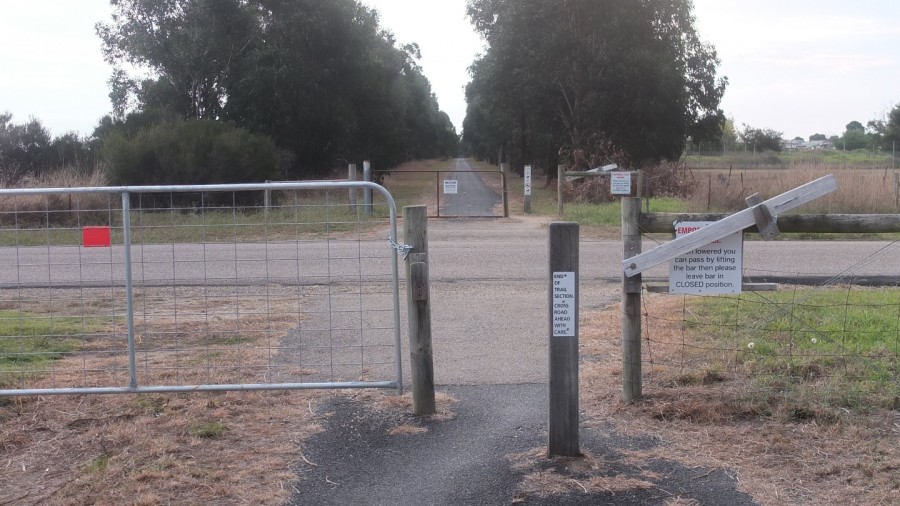 This “doors” are always tricky with the trailer but that’s OK. At least I don’t have to detached the trailer every time because it would be very annoying 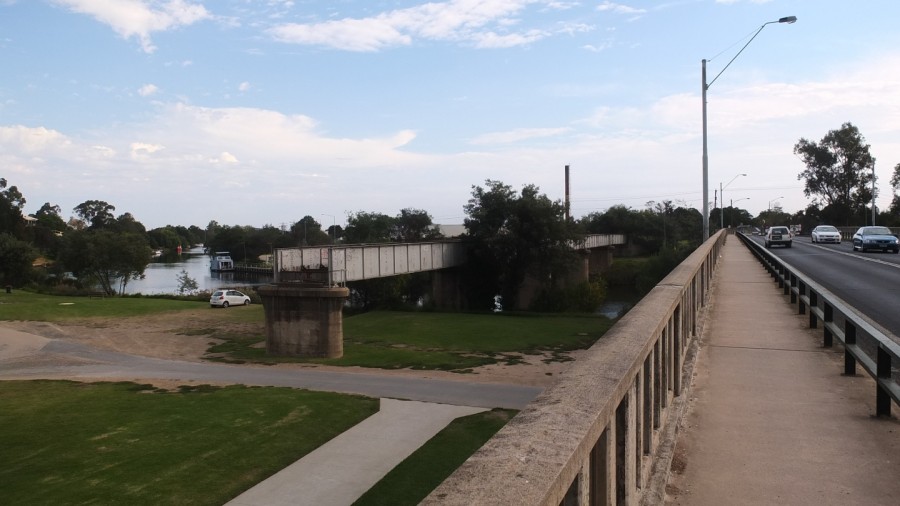 Yep, I’m here! Bairnsdale! I will look for a Mcdo and use their WiFi because my phone connection doesn’t work which is strange. This is a city, not a remote village so I should have a internet connection, even slow. I’m going to call Vaya (my phone provider) and find out. This is it for today. See ya :-)