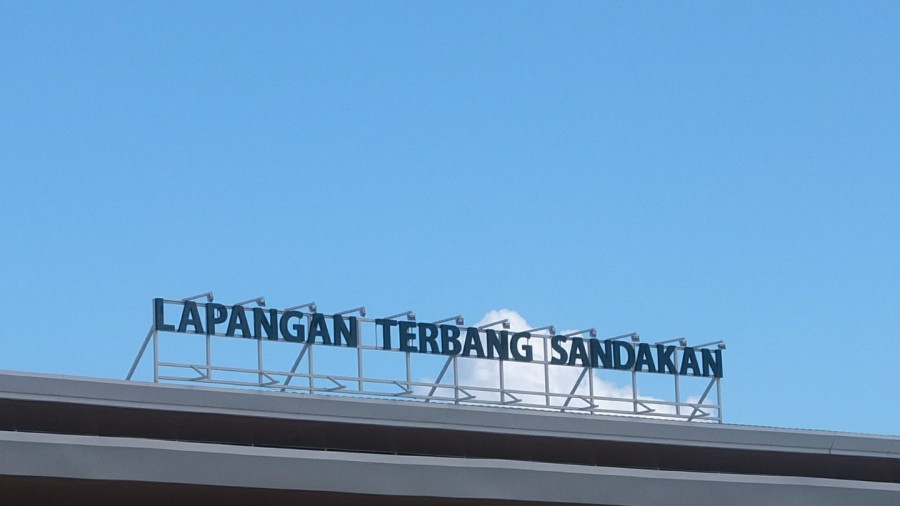 Here we are in Borneo! Rah, this is going to be different travelling without any bicycle. We will have to rely on public transports and I’m sure it won’t be funny everyday. Today, we want to get to Sepilok, a small village where there is a famous Orangutan Rehabilitation centre. We don’t know it but we are not going to meet orangutan the way we expected. This is jungle here! 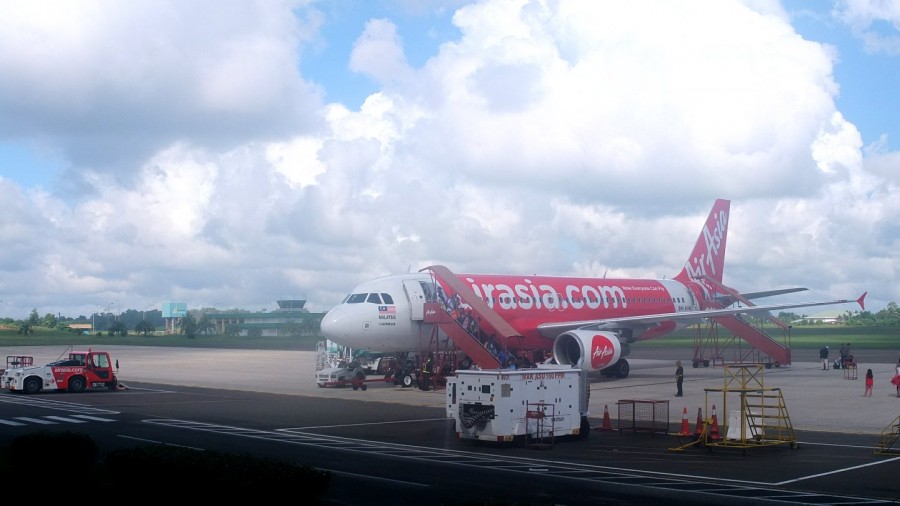 Compared with inside the plane, the atmosphere here is hot and humid. My camera gets misty. 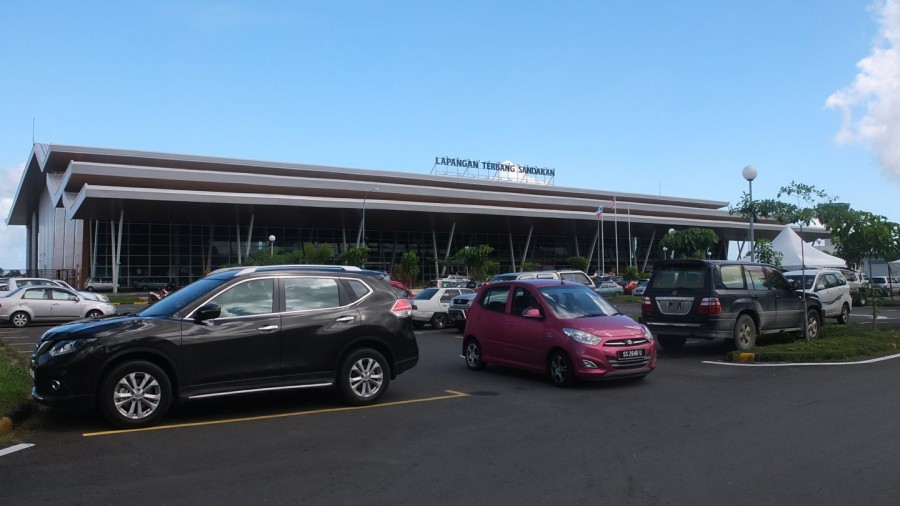 Okay, now the challenge is to get to Sandakan city using the cheapest transportation as possible. The taxi are waiting at the front of the exit to pick up travellers. Naturally if we ask “Is there any bus going to Sandakan?” there answer is “No, taxi”. Of course there is! Everything is online! We just have to walk about 5-10min until a roundabout at the entrance of the airport and a bus stop should be here. 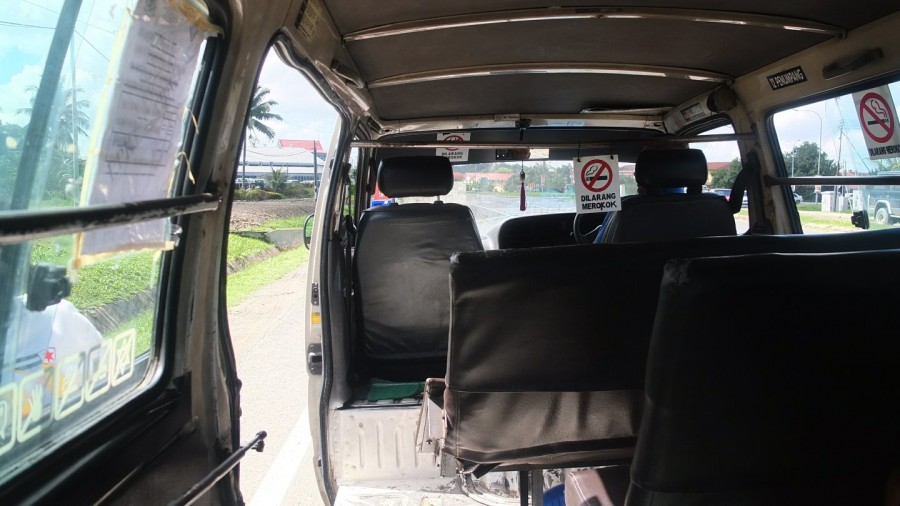 That was actually pretty easy! As soon as we got there, a minibus arrived and a woman invited us to get in. Cool! The price to Sandakan is 2Ringgit, perfect :-) 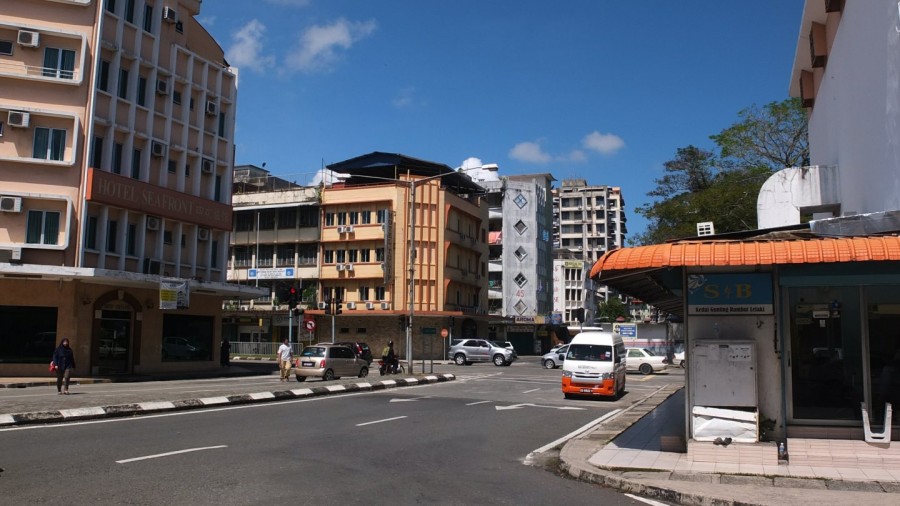 Once in Sandakan, we found a place where to eat something and then looked for another bus to reach Sepilok, our first destination of today. The previous woman told us to find the minibus number 14. Actually all the bus look the same (like the one on the picture above). They have lots of writing on it and it’s a bit tricky to understand where they are going or where they come from. We just asked around, try to meet someone who speak a bit of english. Finally we got in a bus that was going where we wanted to. We hope! 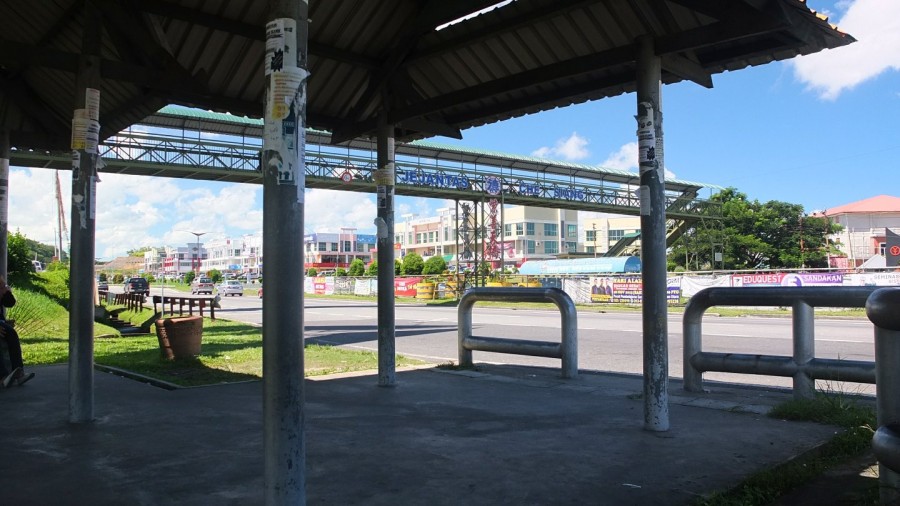 Before to get to Sepilok, we had to stop 7km later because Stephane wants to unlock his phone. A woman from a shop in Sandakan explained us where to go. The trip cost us 1.6Ringgit. Internet says that a trip “Sandakan > Sepilok” cost normally 2Ringgit so the rest of the trip to Sepilok should still be cheap. We waited, waited and waited again, no bus were coming. Sometimes we would ask to random bus if they would go to Sepilok. One guy offered us 40Ringgit for two to bring us there! I was not sure about the distance and the price but as we were nearly ready to pay I’ve seen a passenger smiling. When the driver told us the price, the passenger looked at him, smiled and said something in Malay like “Oh, your are going to make a very good deal with those tourists”. That was it, I understood this guy was ripping us off. I offered him 20Ringgit for two and he refused. We got out of the bus… What is that? Because we are tourists you multiply the price by 10?! No way!
Later on, we heard someone calling “Stephane, Stephane!”. We did not realize yet. Who knows us? Actually, it was the woman we met in the first minibus from the airport. She asked us our name and has a good memory apparently :-) She told us again to wait for the bus number 14. “Welcome to Borneo” she said and her bus left again. That’s very nice of her. Nice people here :-)
Maybe another 30 minutes later, a bigger bus stopped front of us. We asked the same question again to the driver: “Are you going to Sepilok?” An american guy hop off the bus and came to us: “Yes, this bus is going to Sepilok”. “How much is it?” 2Ringgit per person”. “Ah, cool :-)”. Few! 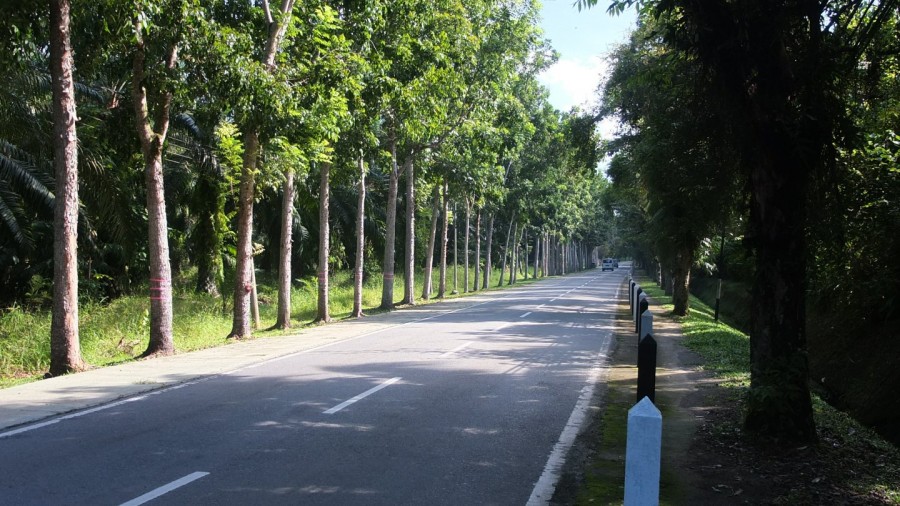 This is not finished! The park we are looking for is actually off the main road and those buses don’t go there. They drop us off at the intersection. From there is approximately 3km to get to entrance of the rehabilitation centre. Obviously, taxi are here too close the gap. That’s normally 2ringgit to get there. As no taxi show up, we started walking… About 1km from the entrance, a taxi slowed down next to us and I don’t know why we took it haha. 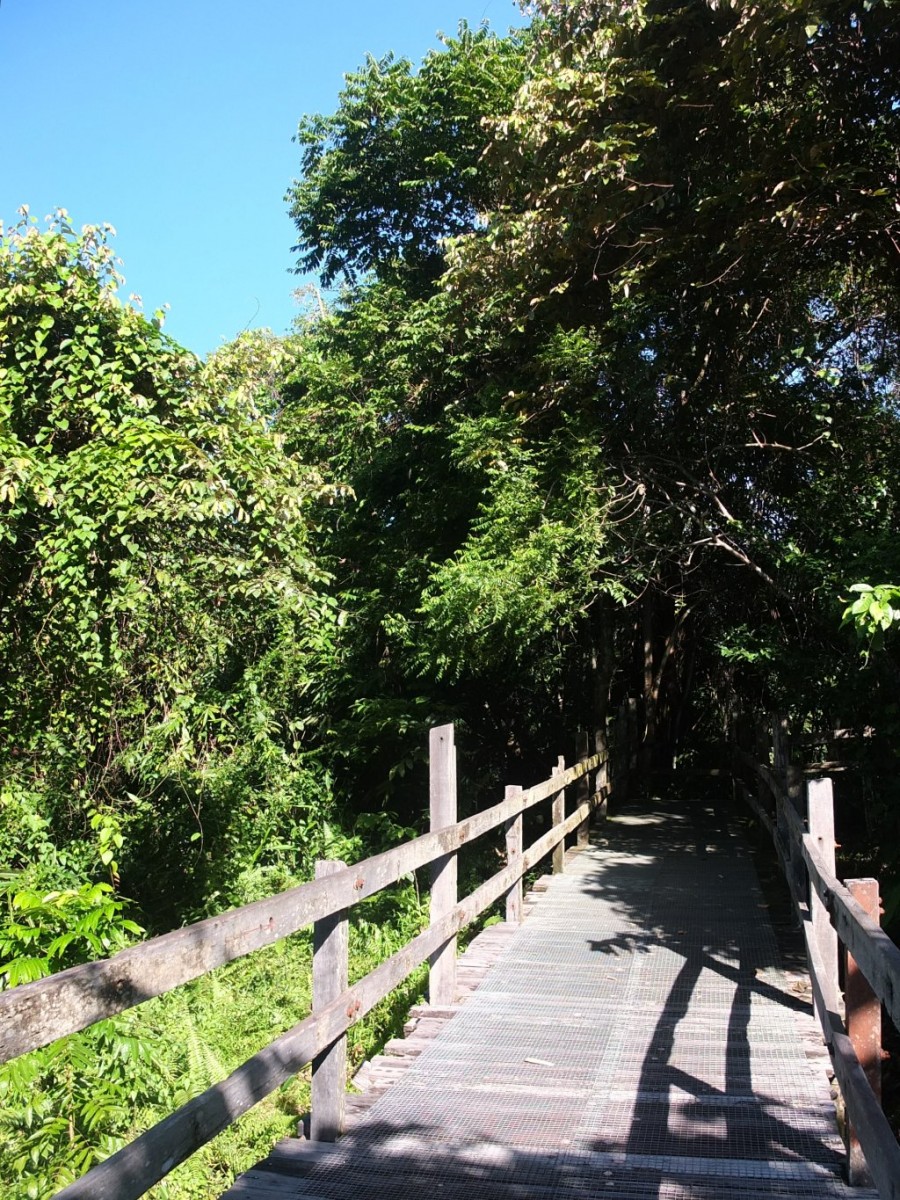 Unfortunately, that place closes at 4pm and we arrive 20 minutes before the end… On the opposite side of the road, there is a track that leads to another park: The Bornean Sun Bear Conservation centre. These bear are unique in the world and endangered. That’s a Malaysian Chinese guy who devoted his life to save these little bears and created this conservation centre here. Good on him! 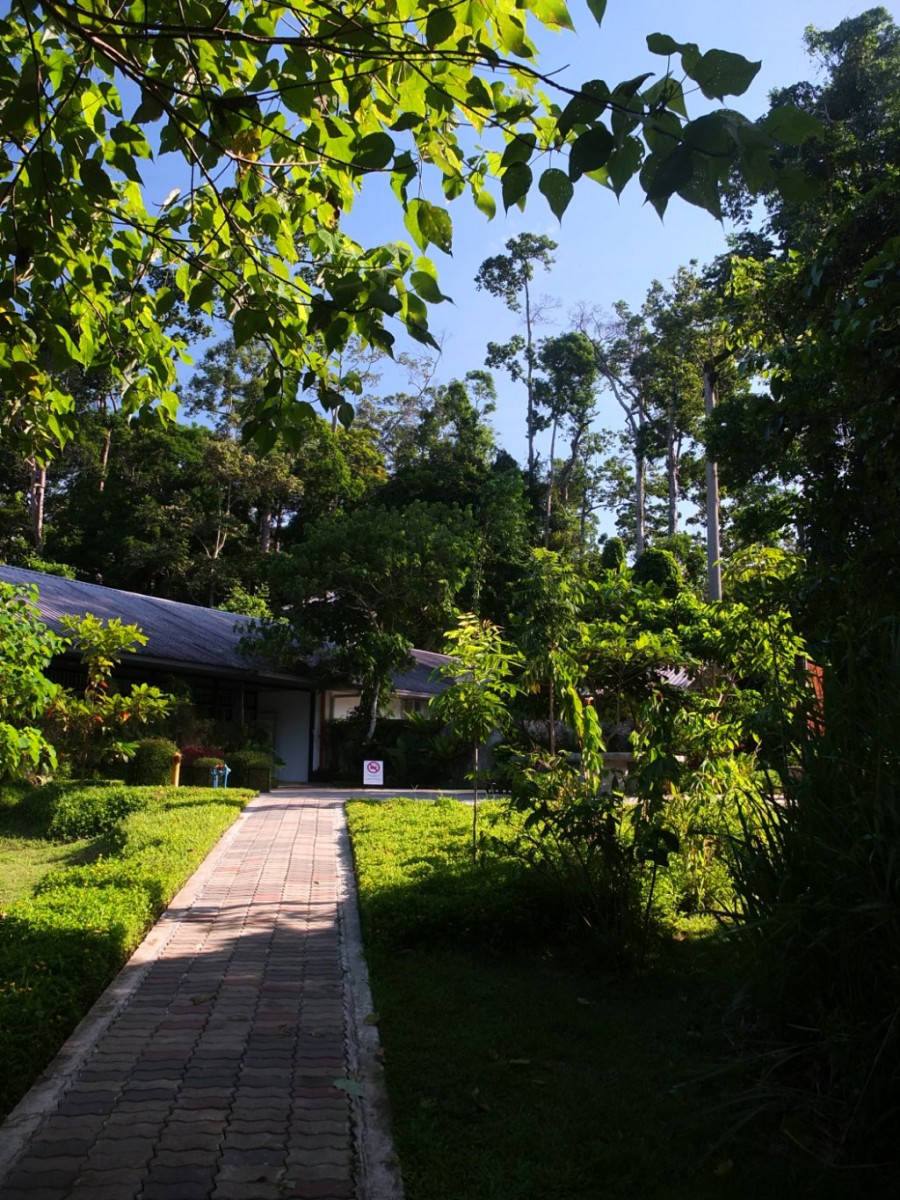 After few minutes walking we arrived at the main office. 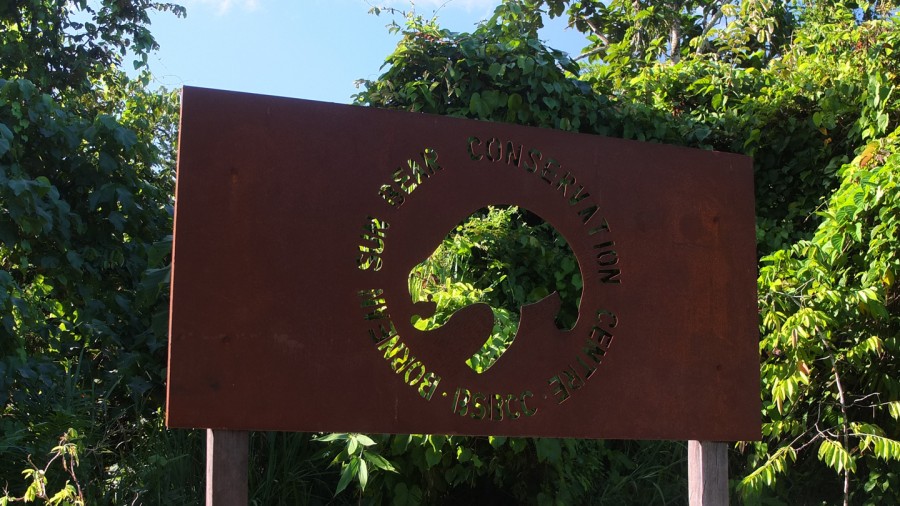 The entrance fee is 30Ringgit. This is their logo. There was a leaflet on a table that offered anyone to participate, and help saving those particular Sun Bear. Something we did not expect is we must pay to participate and it cost more than a thousand ringgit to stay a month. I don’t have the price in mind but it sounds a bit expensive. I’m wondering how many people have participated to those internships. We will see later if we go there or not because they are going too close very soon as well. 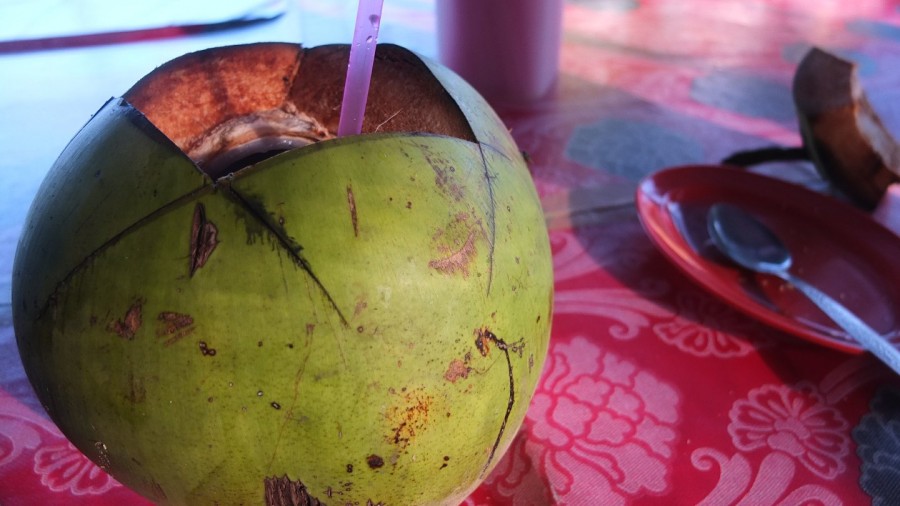 As we came out from the Rehabilitation centre are, we stopped at a warung to have some snacks and something to drink like a nice coconut :-) 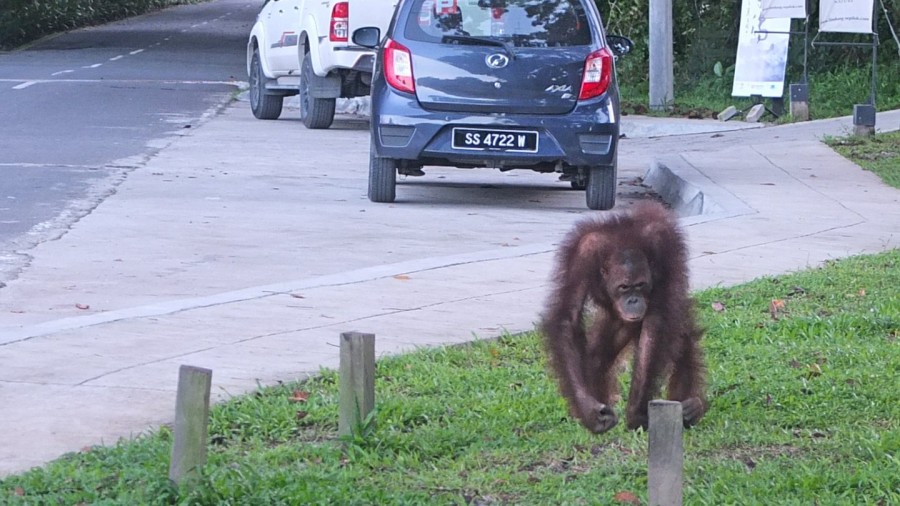 We were thinking of sleeping in the area tonight and tomorrow morning we would visit the place until… until an Orangutan came out by himself! The warung is about 200 metres from the main gate which was open. Suddenly we saw something that did not look very human but more like a monkey. That’s an Orangutan and he/she is coming straight to us! The woman who owns this warung (she actually lives here) got completely crazy. She throw coconuts and branches to the monkey who did not care at all. He/she stopped for a second and keep walking steadily and straight towards food! We had to leave the place. Few people came around and everyone looked at the monkey without knowing what to do. The woman was still shooting so loud!
Quietly, the Orangutan walk in the warung, got on the table and open a big plastic box. Inside there is packet of chocolate powder. He/she opened one of them and poured it straight in his mouth. Clever monkey :-) 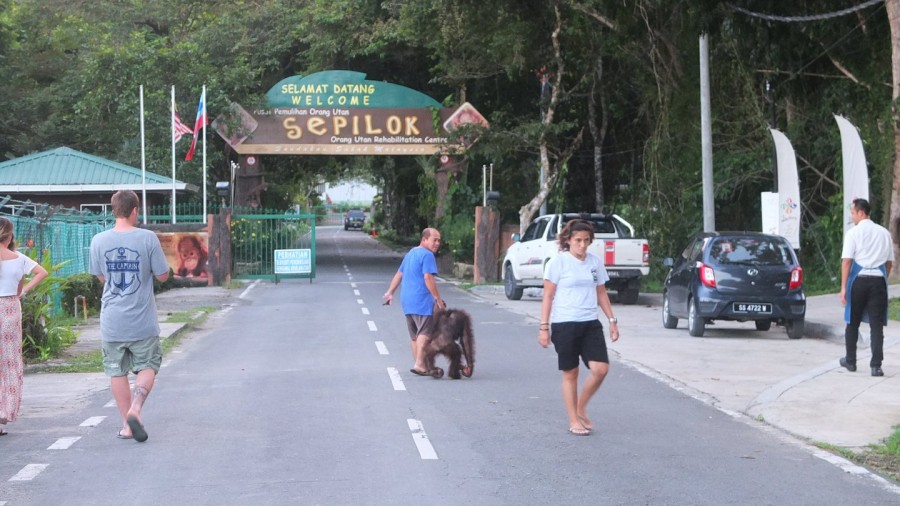 A minute later, a guy arrived. He seemed to master the situation as he went straight to the monkey and pull him/her by the hand. He had to be strong because the orangutan was quite happy having some snacks here. It might not be the first time obviously and after few more minutes, the monkey was back in the rehabilitation centre. Wow! what an animation! Maybe, this is not the best idea to sleep around here as offered the woman, the owner of the warung. We might find another place and feel safe. 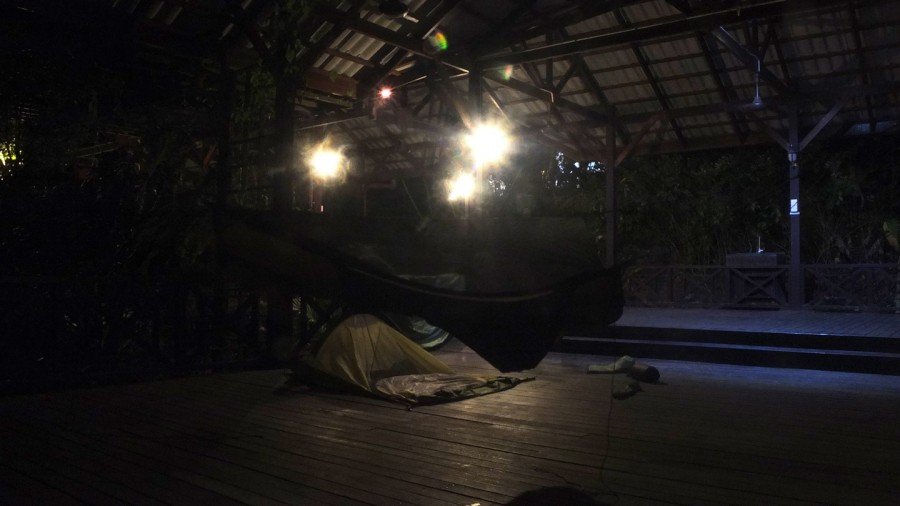 We stayed at the warung place until dark. The woman showed us a football field where we could sleep for free. We had a look first. The field was very muddy and I could not find any proper trees to set up my hammock. I came back to the warung and found another spot but that was just front of an restaurant… Finally, we met some taxi drivers who were waiting for clients to come out of that same restaurant. One of them indicated us where we could sleep tonight. He added that it is now the rainy season and when it’s raining it’s usually heavy. Better have a roof above our head. He called his friend and that was it. We just had to walk back down the road for about 1km and turn left then walk another 1km to reach a place that’s called “Rainforest Discovery centre”. When we arrived there, some guys welcomed us and show us where to set up our campsite. This is going to be a good night :-)