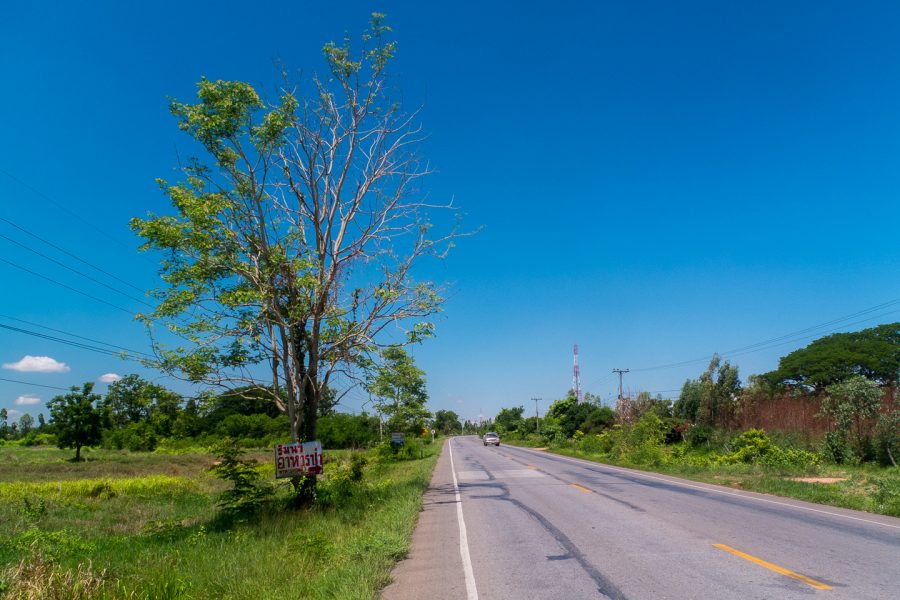 Beautiful sky today! I will have to stop definitely before 11am because if I don’t I’ll melt! Today I met Wimol! You never heard about him but I did ;-) He is a Thai guy we met with Stephane back in Penang (Malaysia). At that time he gave us his address and invited us to stay in case we would come around his living area. I absolutely didn’t know I would finally see him again. Wimol stayed an hour and came back to work. Me too :-) I kept working on my website until the sky urged me to move soon. Another 15km later I was laying down in my hammock in a peaceful spot. 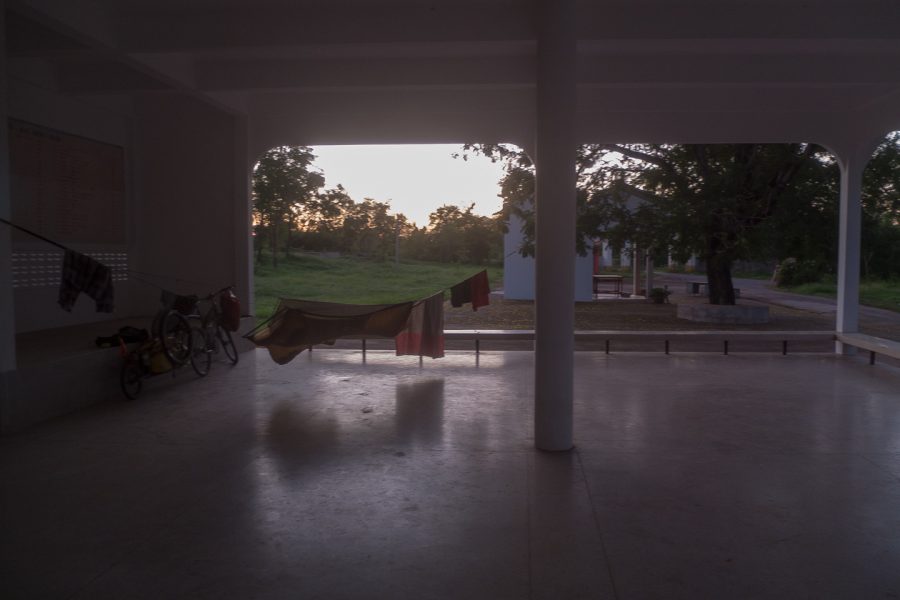 That’s where I stayed yesterday night and from where I pursuited those bloody dogs all night. Rah! They never surrender! Every 2 or 3 hours after I tried to kick their ass, they came back. These dogs are such coward. They stay far enough so I cannot reach them easily throwing anything that came under my hand but they keep barking and barking trying to say something like “move away, this is our spot”. 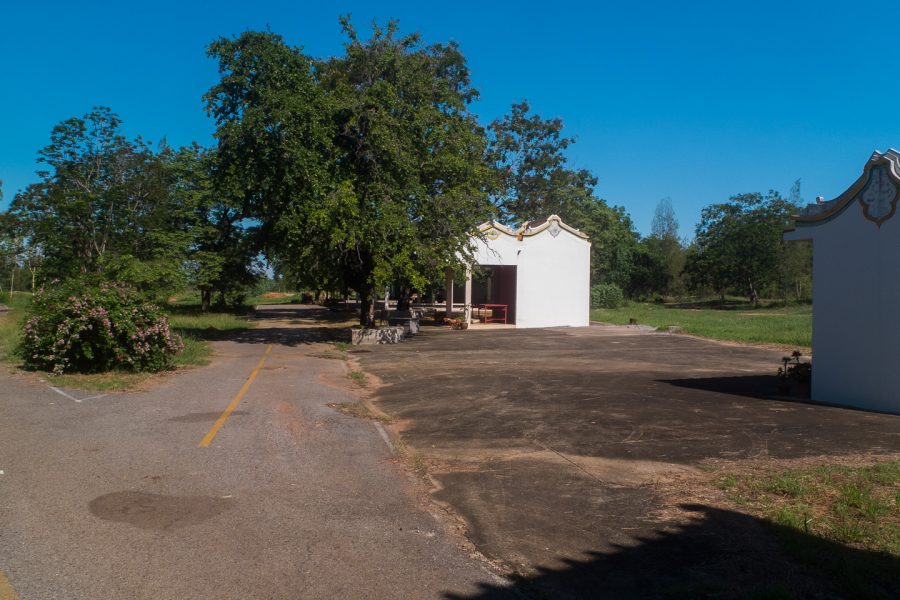 This morning, a couple of old chinese came by. I’m pretty sure they spend all their days here. This park seems to be abandoned and they took advantage of it. This is their garden. Well, I wish the dogs would have abandoned it too! As soon as the couple stepped in, the dogs followed and surrounded them (they naturally know them). Yesterday night, they would stay quite far from me when they were barking annoyingly but today is another story. Now they have their “Masters” with them so they feel stronger (bloody dogs!) They came a lot closer and barked at me again. I didn’t feel any serious threat as they run away as soon as I walk toward then. Such coward! Even the man told me to throw rocks to them. They run and stayed away for a little while then but they always came back…

I’m supposed to meet someone this morning so, during I was waiting for his answer, I washed my clothes, my hammock, cleaned my bike and let everything dry under this early and powerful sun. Every time I moved faster than normally the dogs would kind of wake up and annoying me again. What’s wrong with them rah! You can never be in peaceful conditions here!

Anyway, I’ve finally got some news from Wimol. We met in Penang when I was still cycling with Stephane. At that time, Wimol was hanging around with his pretty new bicycle with wonderful leather bags. With Stephane we had a real doubt if he was really travelling or just showing off. Wimol’s set up was perfectly clean, like new actually.
After a quick chat, he explained he was manufacturing those bicycle leather bags and was here to make new clients. He also told us where he lived and said we would be welcome to stay at his home if we would come around one day. At that time, I thought I would not visit this area of Thailand but we never know. And here I am today :-) Wimol lives very close to Khon Kaen so I contacted him yesterday night. I will meet him along the road soon. 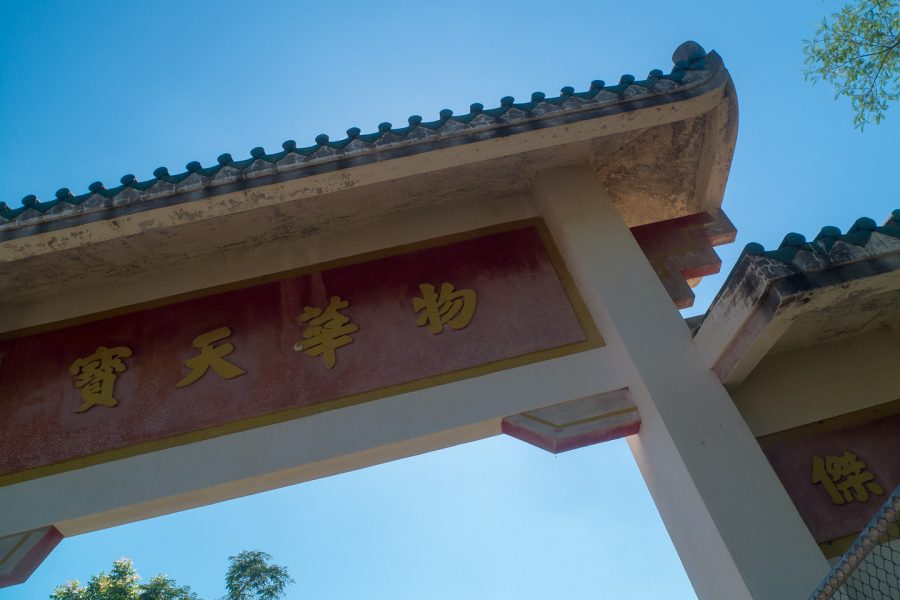 All my stuff is dry and smells nice now. I will meet Wimol very soon normally. He is working in a factory not far and will come by motorcycle soon. Bye! bloody doggy Chinese park. I have nothing against Chinese of course but from now, these dog feelings will be attached to it for a while. Rah! 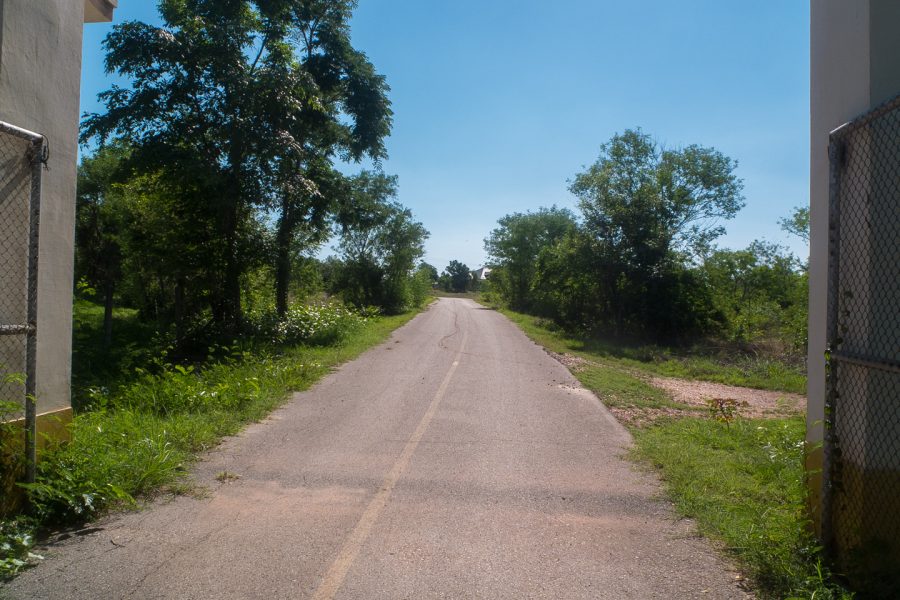 I cycled something like 1o kilometres and reached the next ‘T’ junction. Right there, there was a local restaurant. I stopped for breakfast then and texted Wimol. I had the time to finish my plate but still did not received any news from him. I texted him again saying I was going to cycle to the next… Next what? Guess a little :-) The next Amazon Cafe of course :-) The sky today is pretty bright so I prefered to anticipate.

Look at this :-) So blue and colourful landscape! 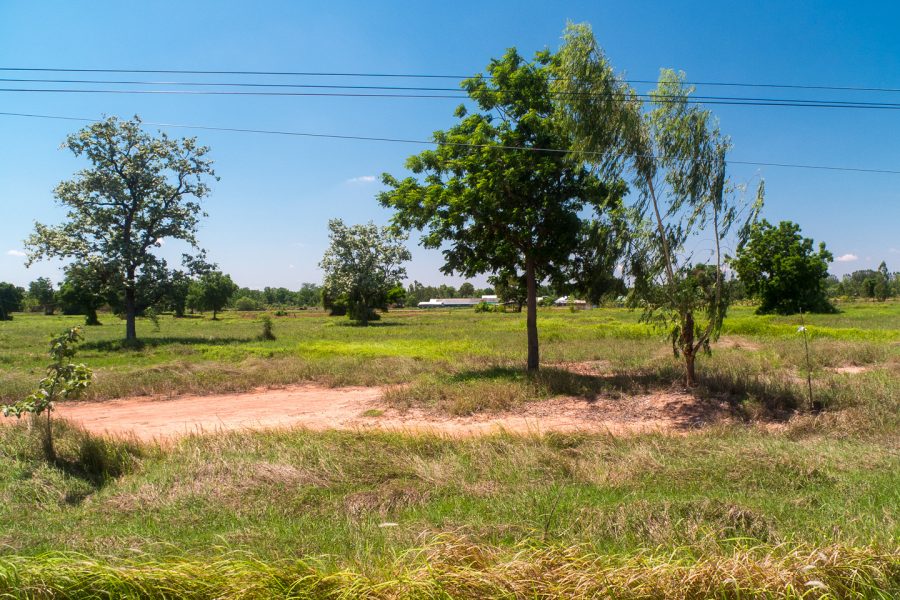 There is not much to see on the sides but it’s nice. The traffic is also not very heavy here. 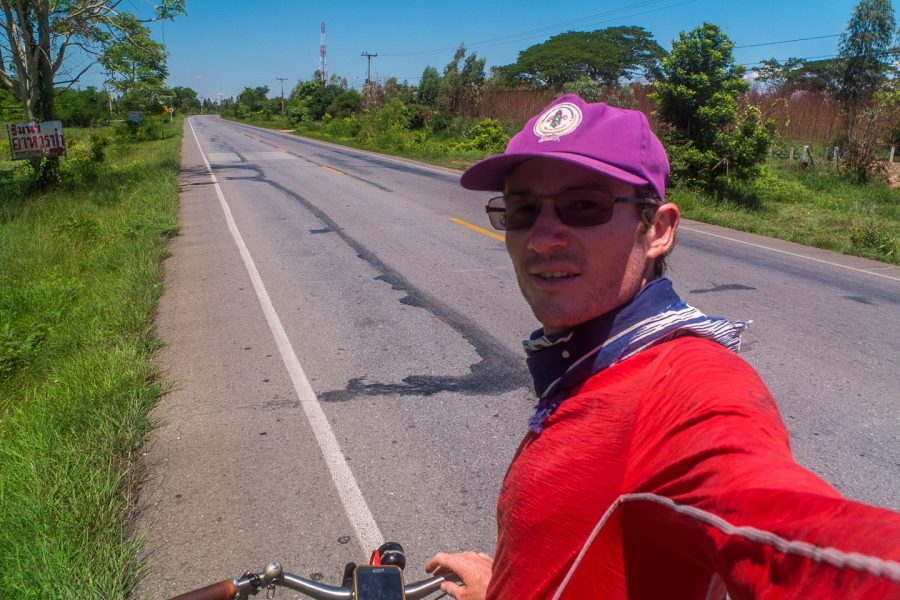 Hey :-) That’s my new hat. I found it on the road few days ago and for the first time today it’s very useful.

Finally I arrived at the next petrol station. During the last minute, a scooter was following me like few do everyday. Sometimes, they follow me because they will take the next turn and don’t want to cut me off I suppose (thanks for that). Sometimes they just follow me to observe. In this case, I feel like a monkey in a cage. Because of the traffic, they cannot always come to my side and say hello so they stay behind. I know that be that stills annoying me. I’m pretty annoyed these day isn’t it? ;-)
So this guy behind who was following me since a little while stated to annoying me, naturally. Actually he followed me even inside the petrol station! What’s wrong with this sticky one? Eh, wait a minute. I that Wimol maybe? Haha, of course it is! That was Wimol haha. I nearly forgot him when I was riding, concentrated on arriving before it becomes too hot.

We spent an hour at the café talking about cycling, his job, mine (when I have one). His english is limited and we don’t know each other really. But that was good to see him again. I did not even take a picture of us for the souvenir… I never dare to ask and do “selfie” like so many do every day. So that’s it. 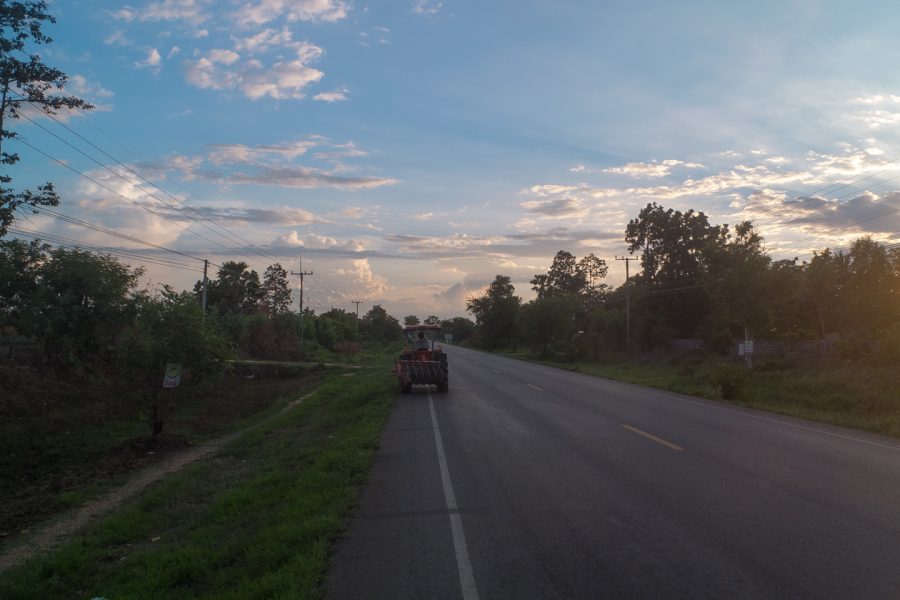 As you imagine, I spent the rest of the day at the Cafe and hit the road again late this afternoon.

I’m going to overtake this tractor! Come on! 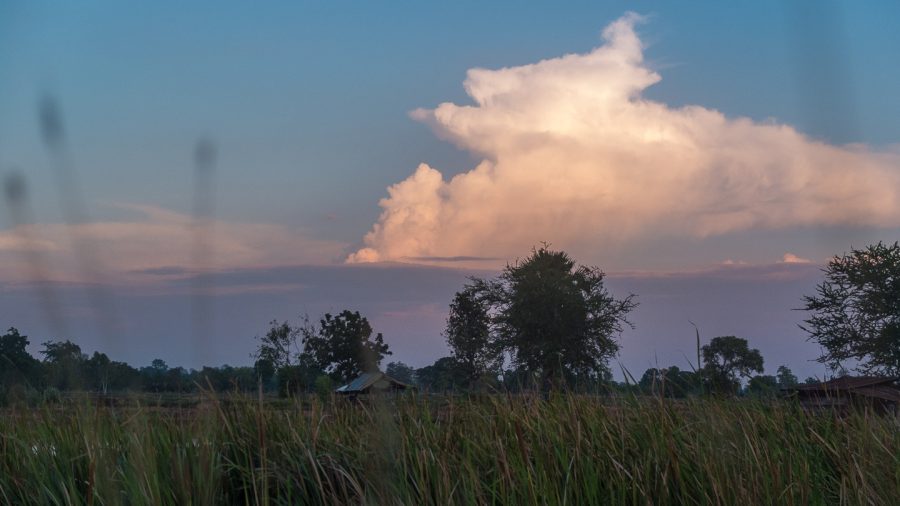 Later this evening, as I passed through a village I decided to turn off and see if I could find a nice shelter. I didn’t find exactly what I was looking for but at least there was no one around THIS time, especially no bloody DOGS. I’ve heard some of them barking from a distance in the dark (I’m pretty sure it was because of my presence) but they didn’t dare, or couldn’t get where I stayed, FORTUNATELY. More details tomorrow morning because it’s far too dark for my camera to catch anything now. Good night :-)