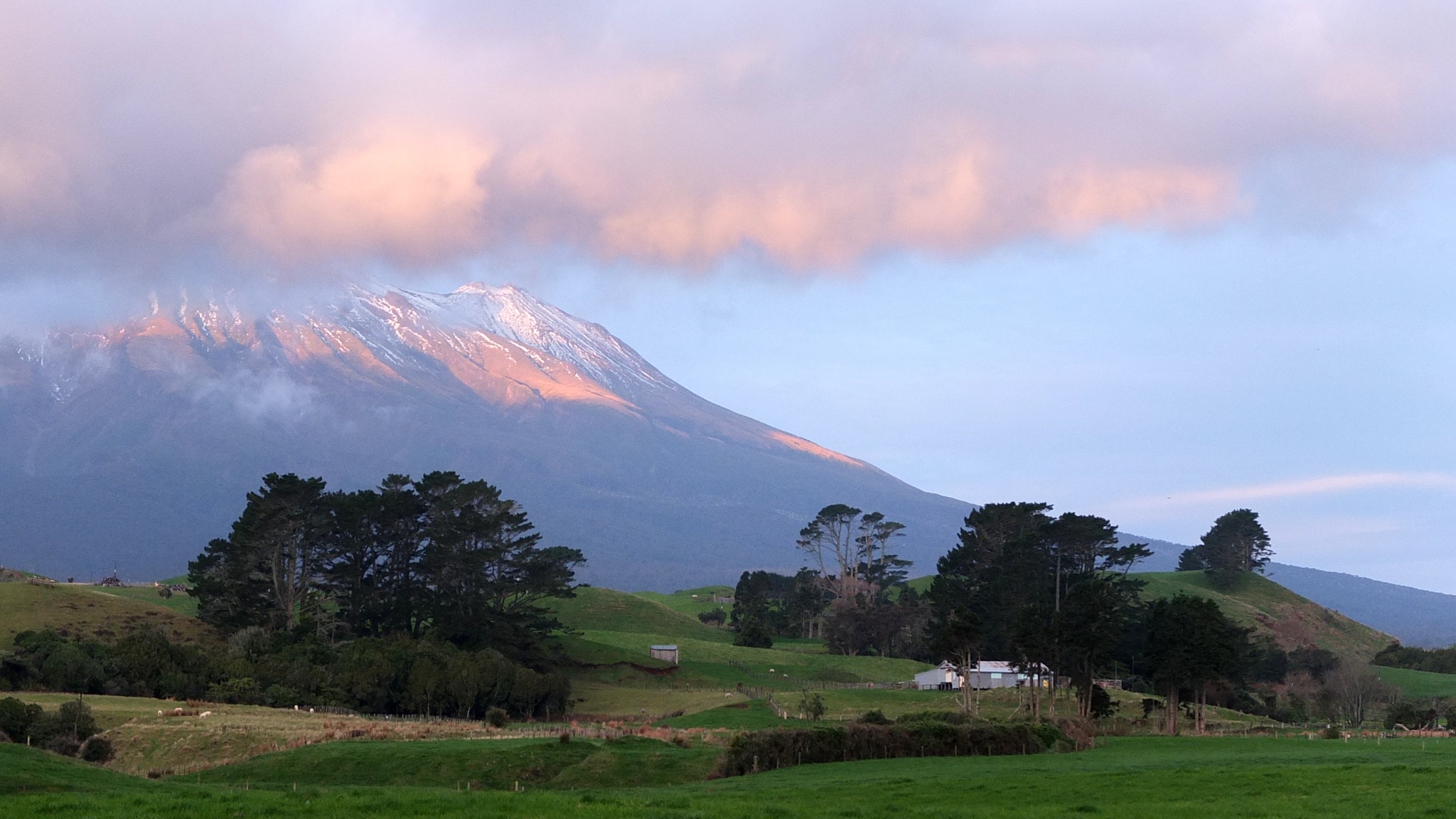 Hey, today I’m going to turn around Mount Taranaki and I will stop certainly before New Plymouth. It’s too far to do it in one day. But I’ve time so it’s OK. On gonna get my backpack I forgot in the bus yesterday and then I will be ready to start this day. 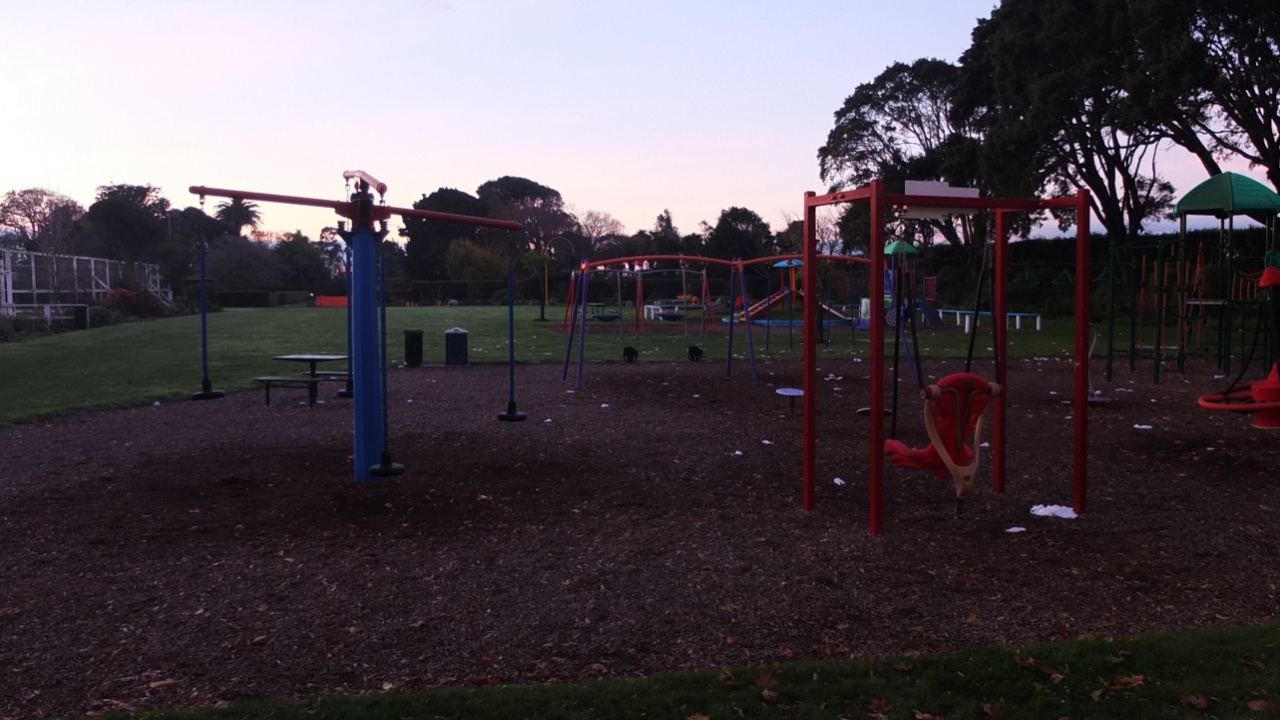 I’ve spent the night in this park next to an observatory. It was quiet and I’ve slept well :-) 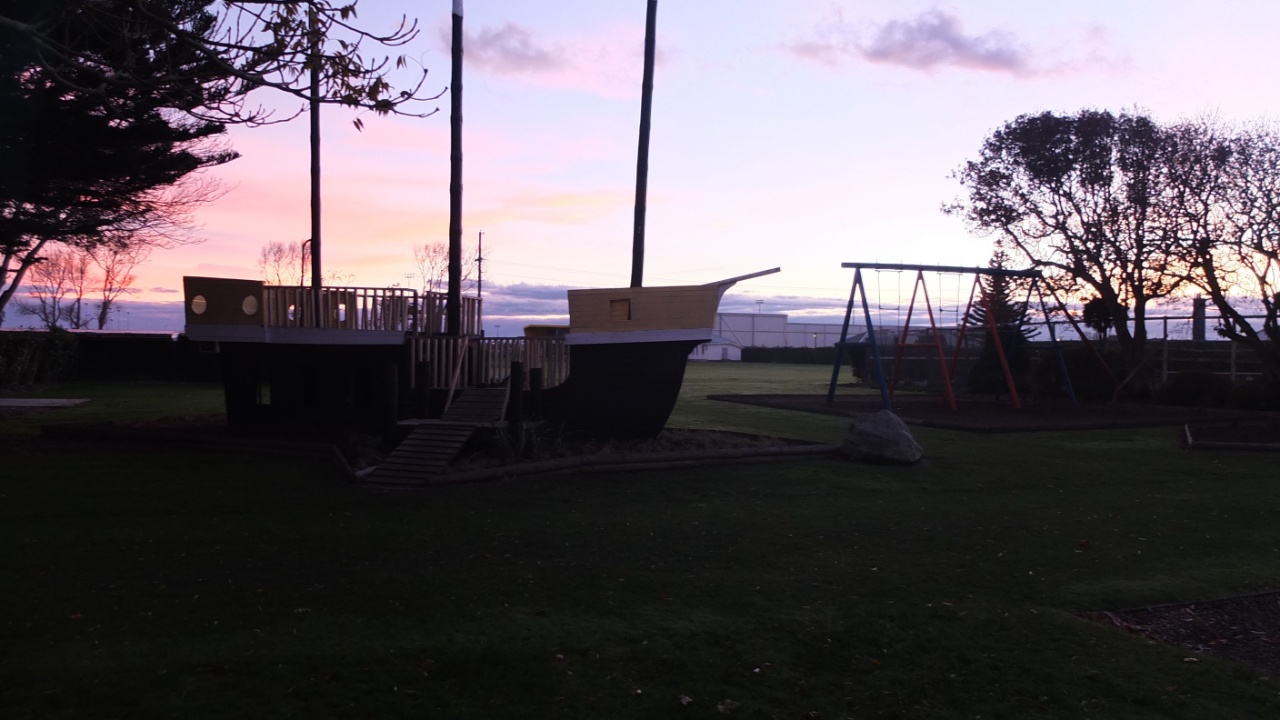 There is a nice playground for children here. They are lucky. 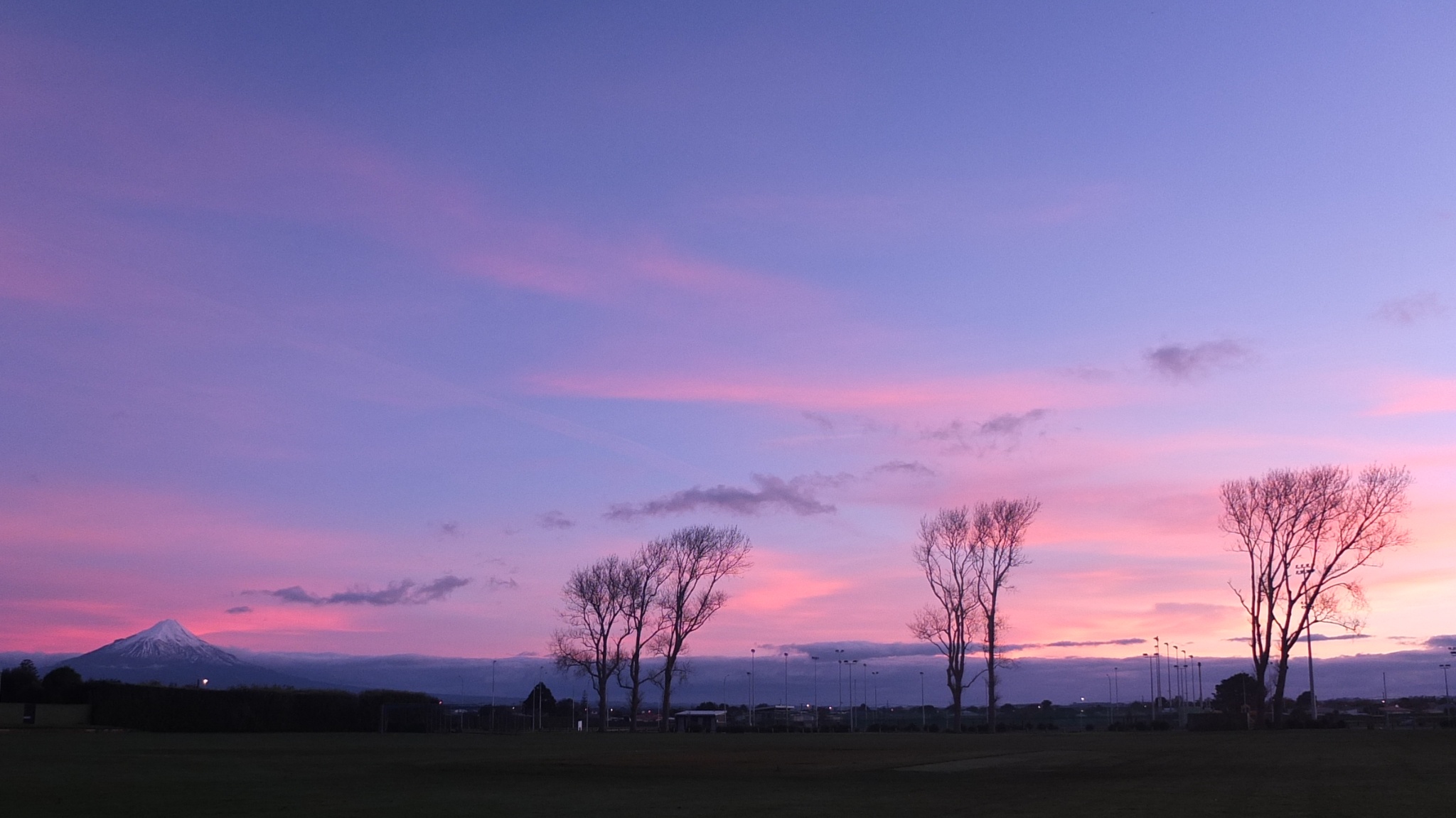 This morning the sky is plenty of colours :-) 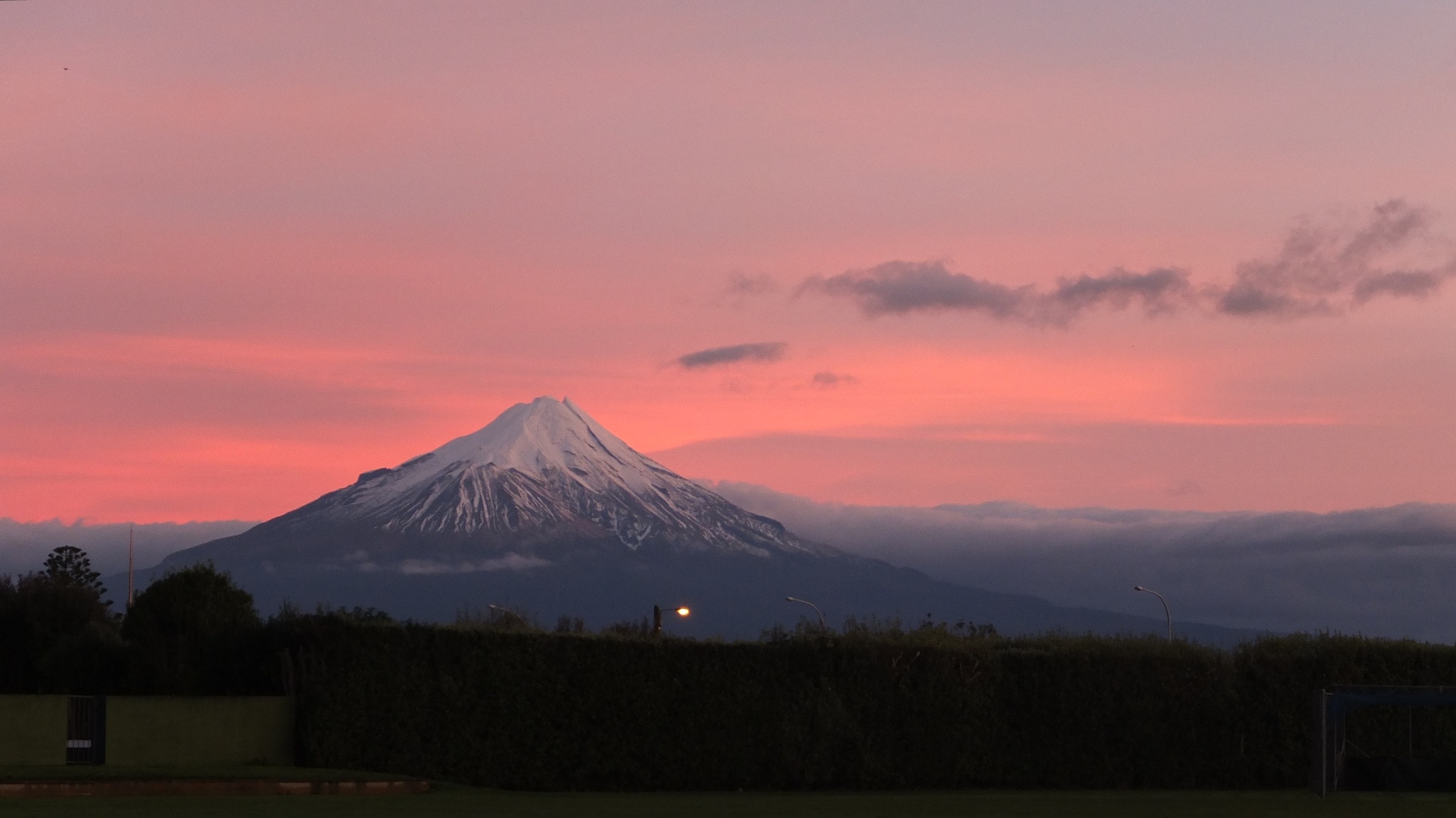 And mount Taranaki is still here :-) massive and wonderful! 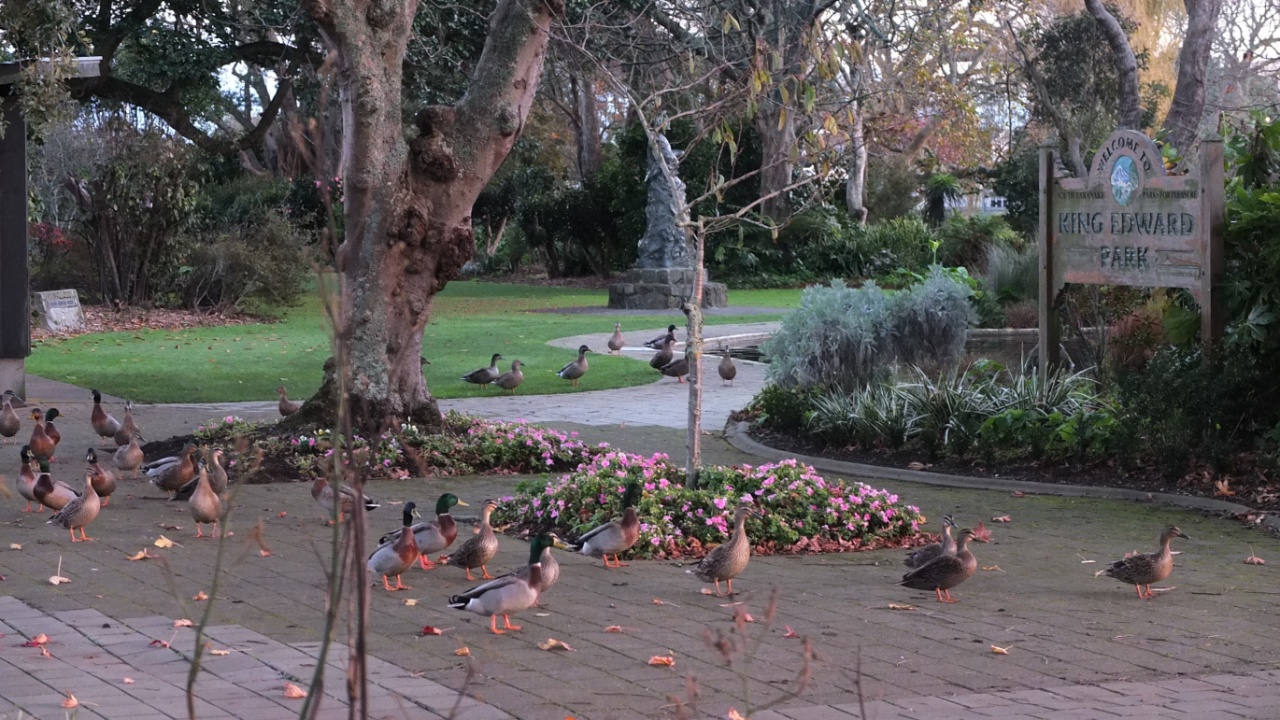 I’m now eating and cooking my meal for the lunch. I’ve got some company. 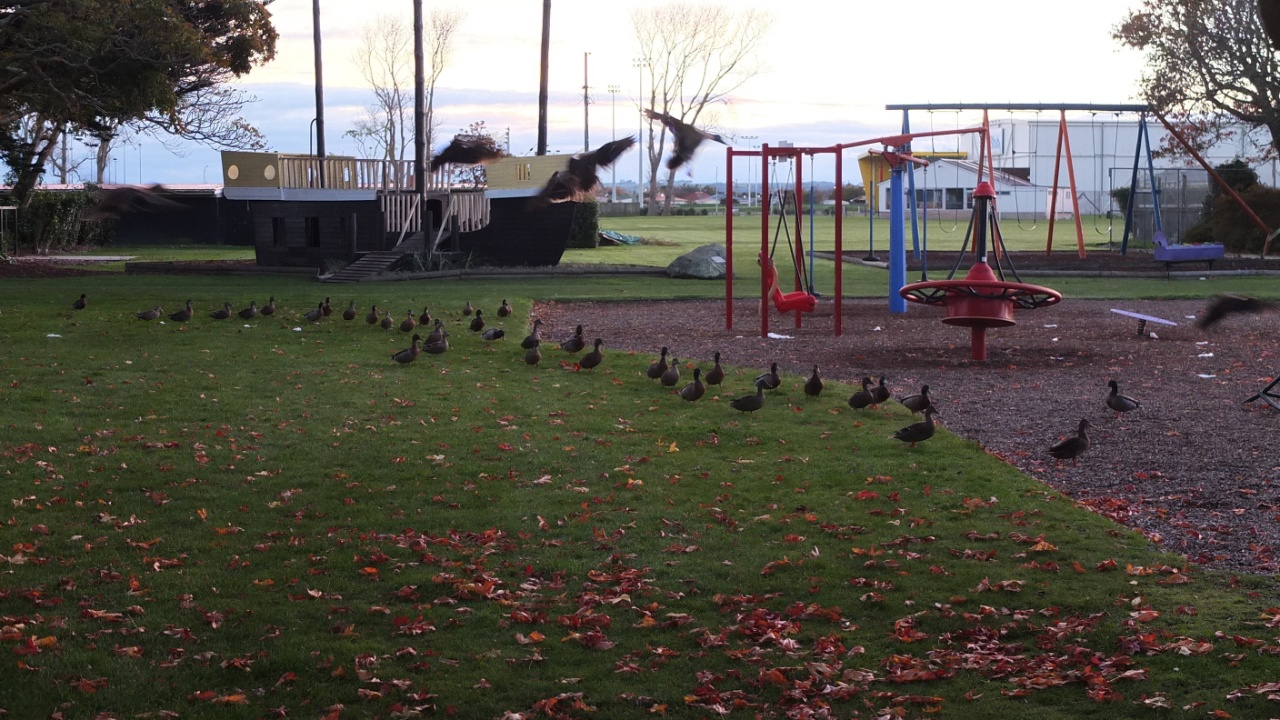 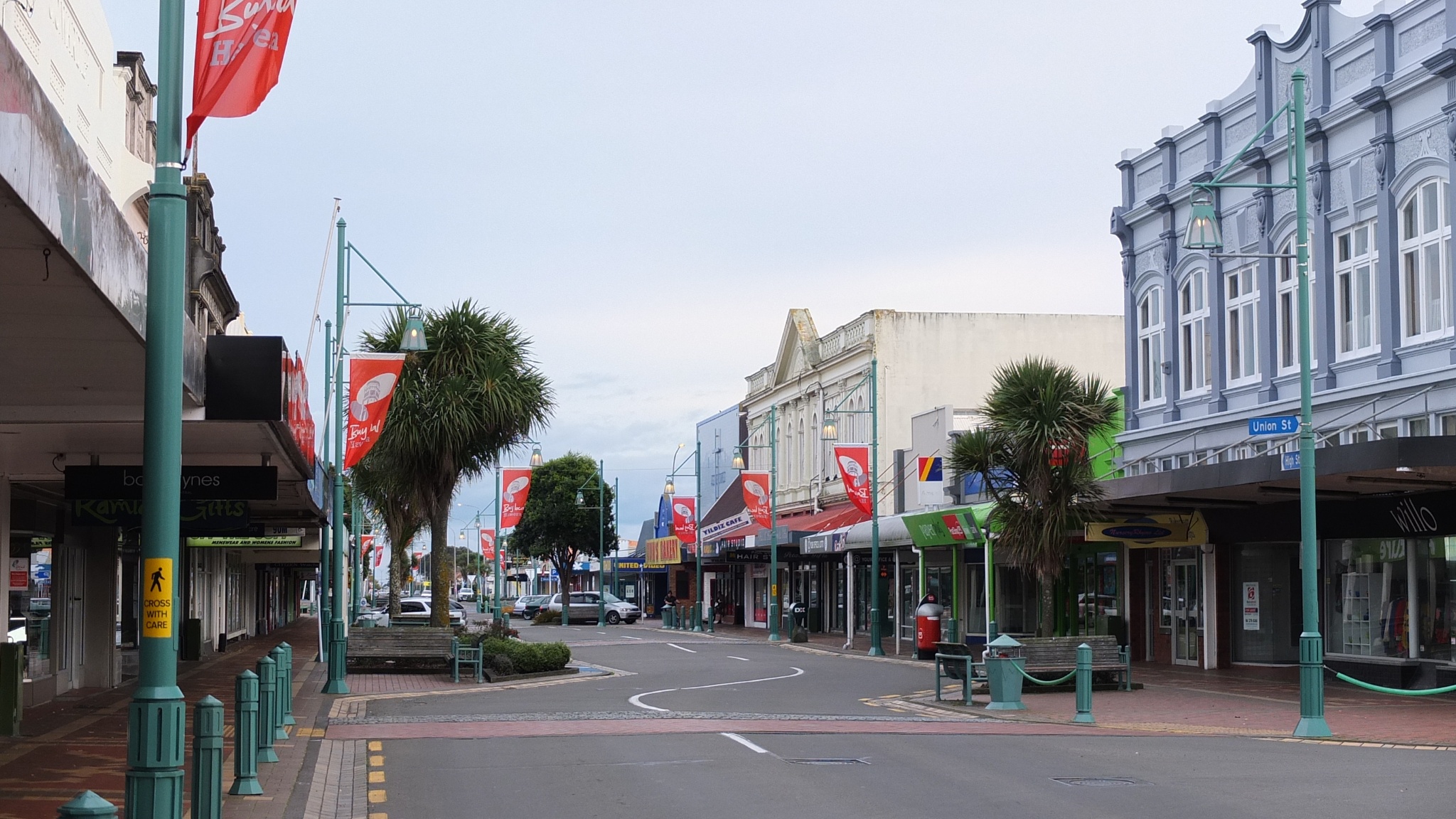 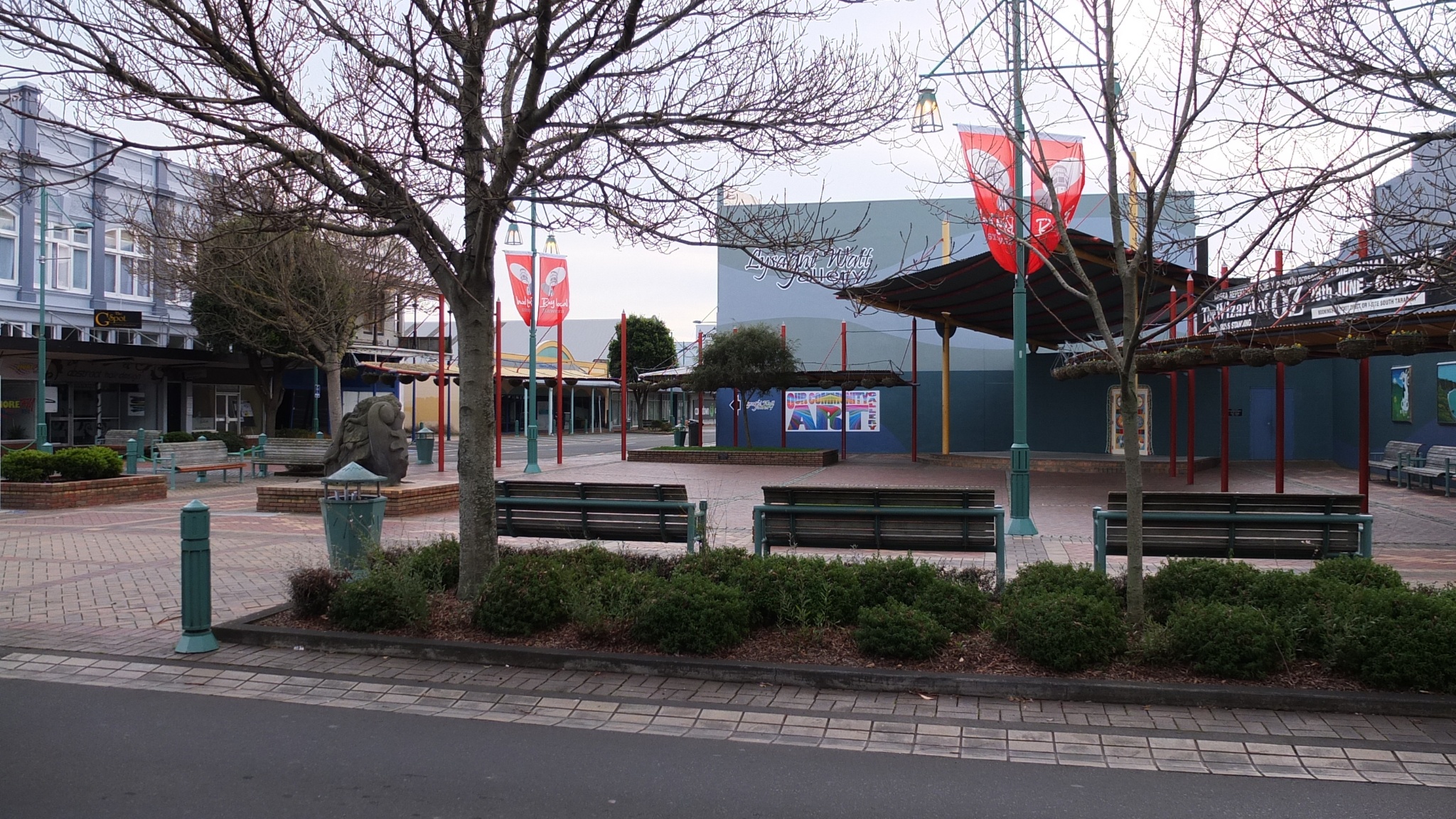 I’m passing the main street. We are Monday but everything is closed because it’s Queen’s day. 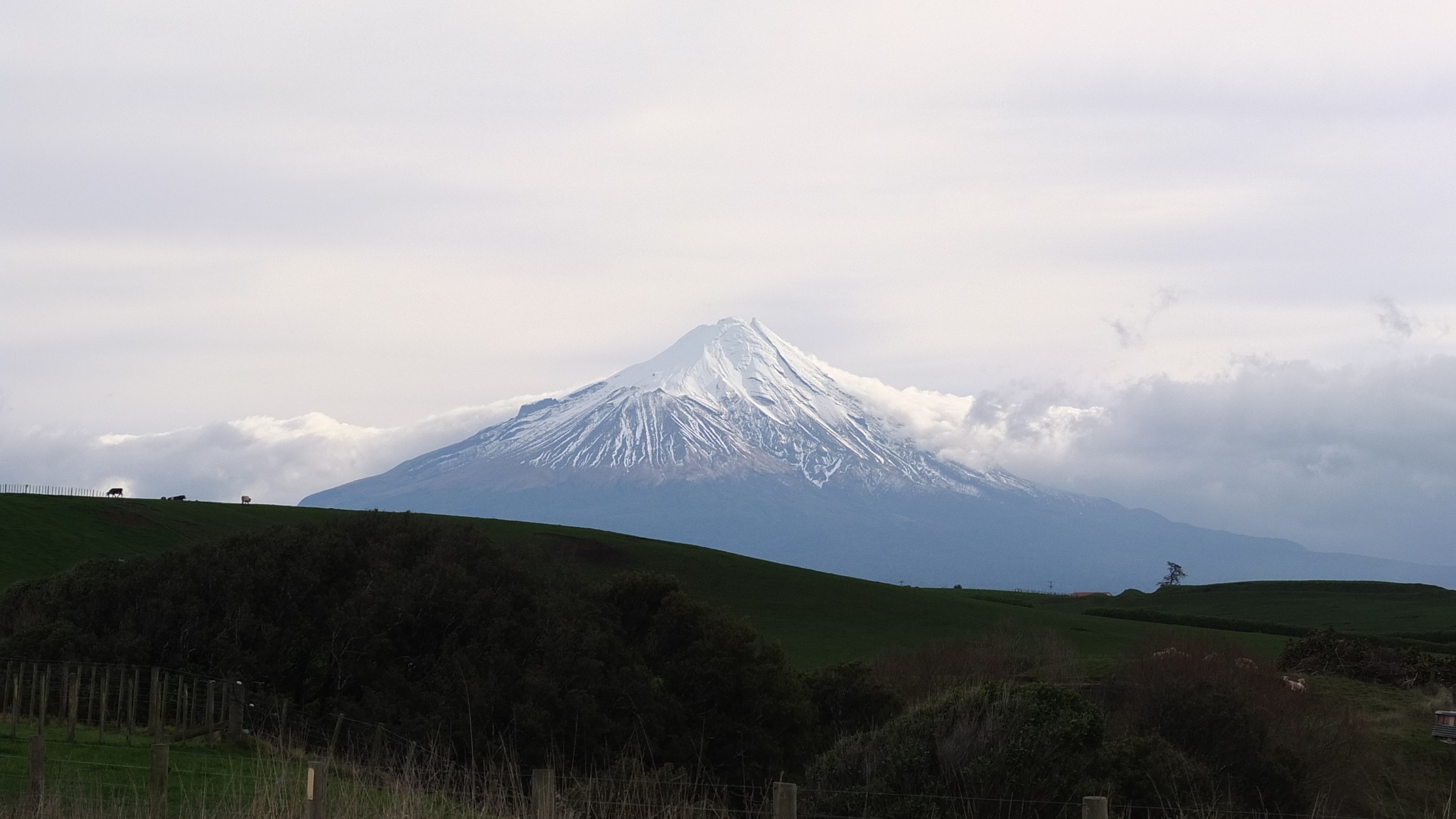 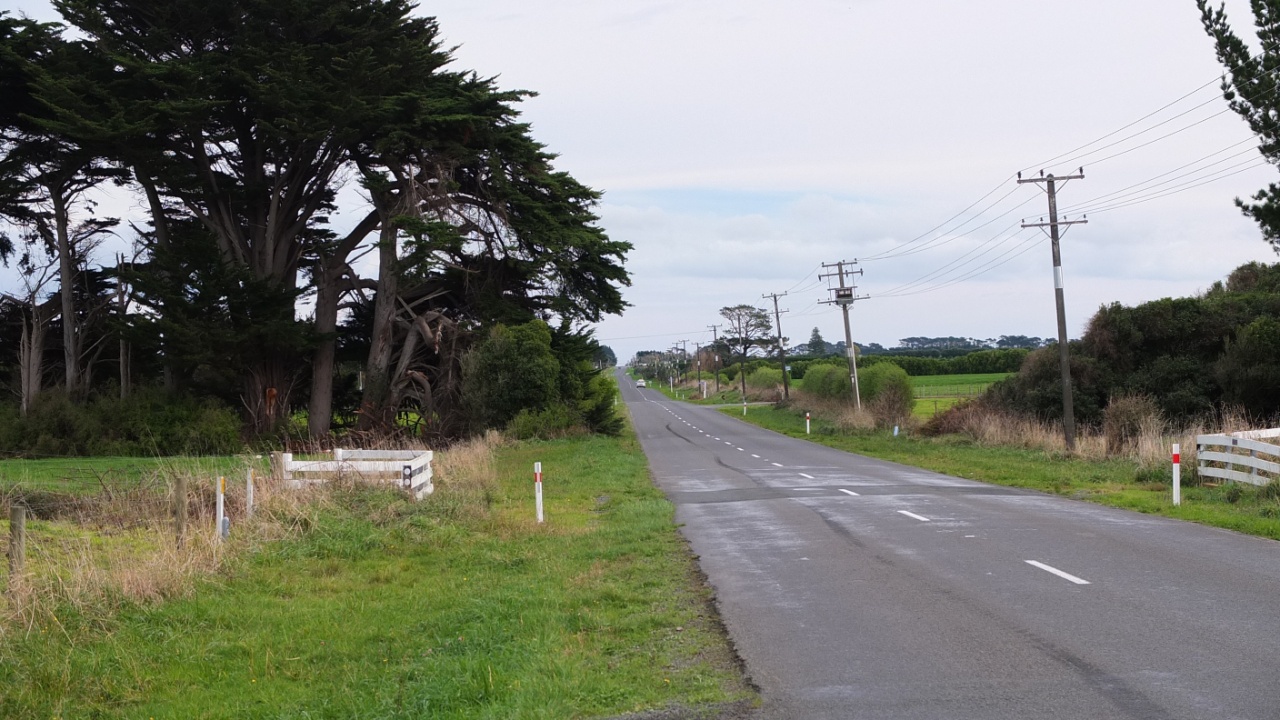 There is two main roads turning around the mountain. I don’t know Wichita one to use so I will slalom between both of them during the day. This one is found towards the see. 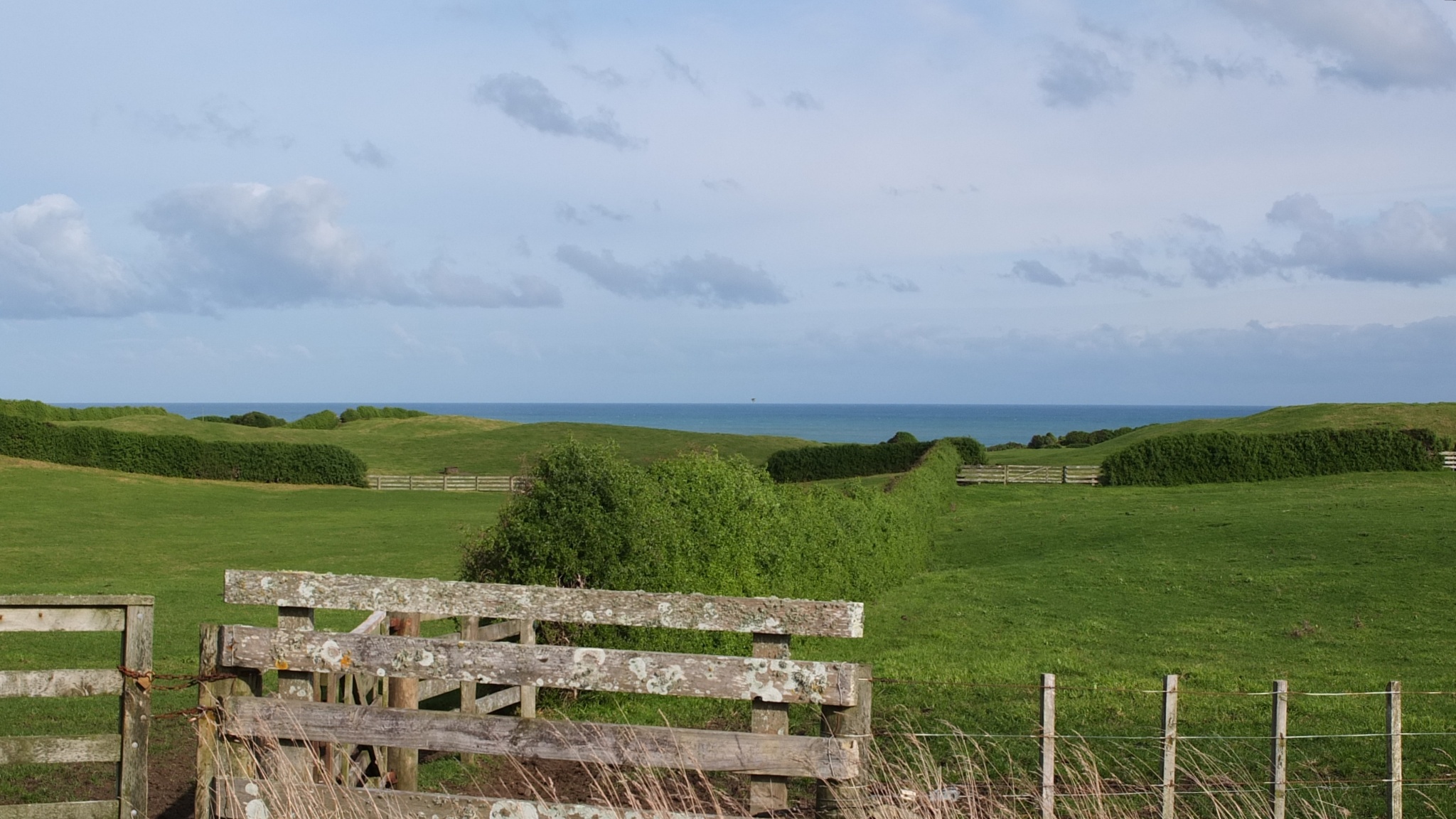 Yep, I almost arrived next the Tasman Sea. 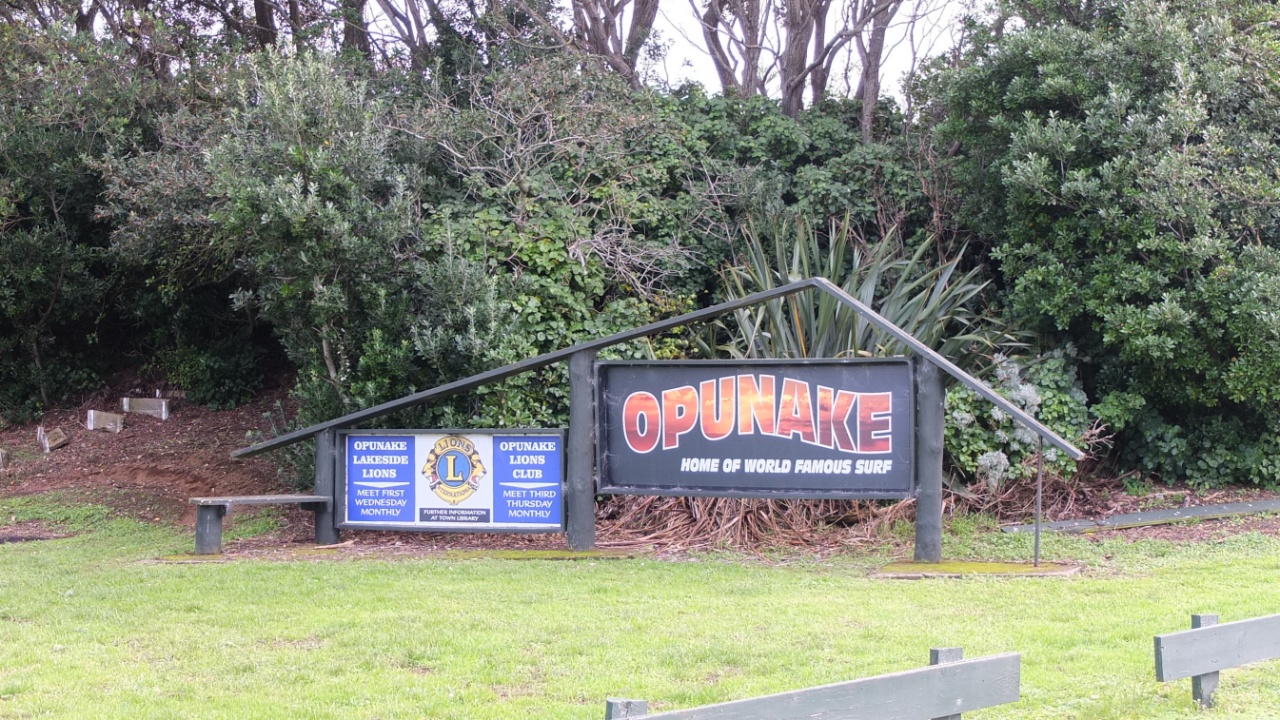 Opunake, a city for surfing. Cool :-) 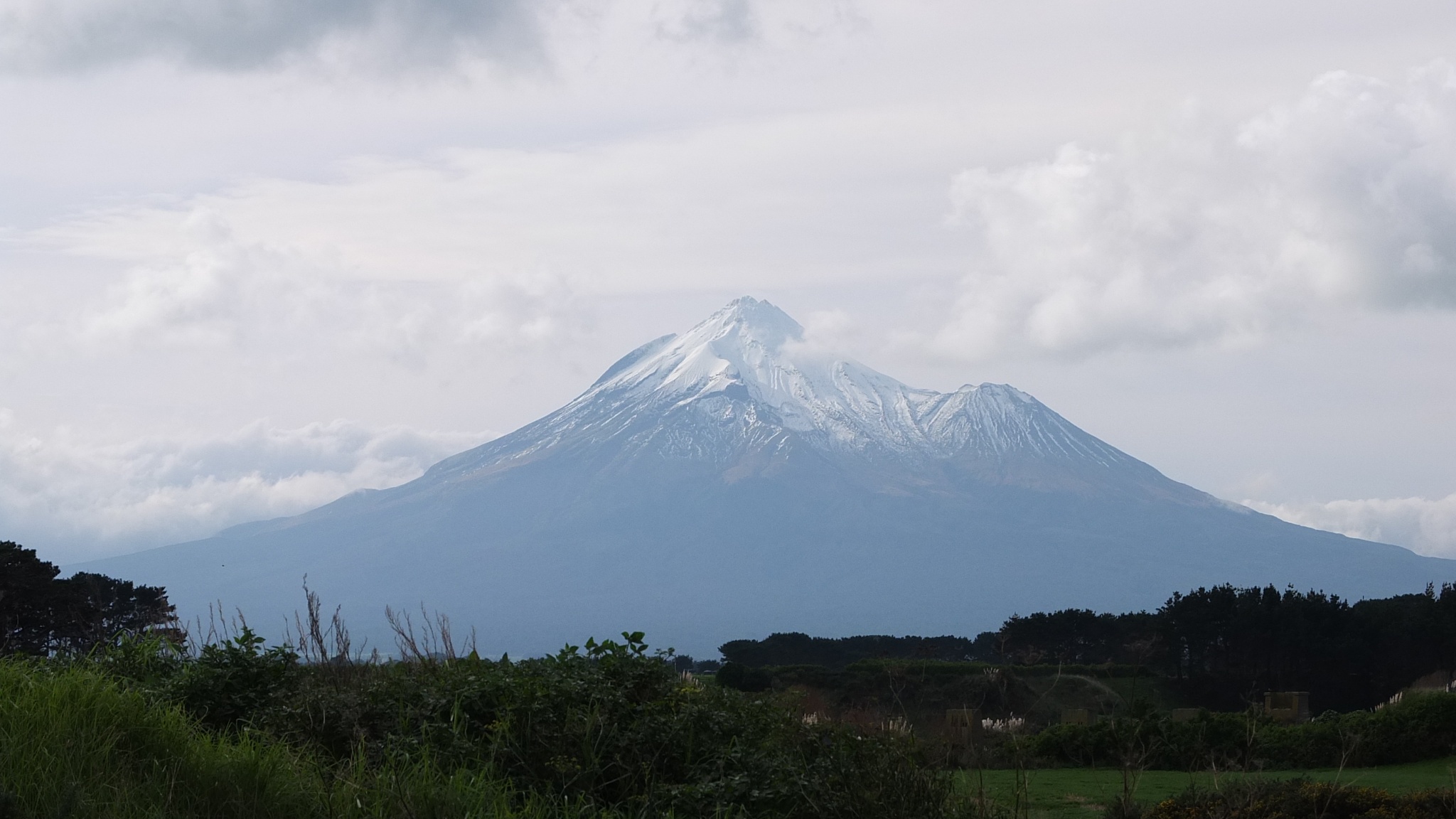 The Maori legend says that “Te Maunga O Taranaki” used to live in the center of north island with the others mountain God’s Tongariro, Ruapehu and Ngauruhoe. All of them felt in love with their neighbor, Pihanga, lovely in her green forest dress dominating the lake Taupō. The redoubtable Tongariro seemed to be her favourite. But how to stop a volcano who wants to declare his flame? One day, when Tongariro was missing, the audacious Taranaki tell everything to Pihanga. Then, a formidable dual shaken the earth, God’s got angry and the sky became dark and smoky. When the peace came back on the earth, Tongariro, considerably diminished in height but winner, was standing next to Pihanga. Taranaki, with so much pain moved from his natal place and reached the sunset. During his travel, he dig the bed of Whanganui river, like a natural and spiritual fence to separate himself from his enemy. When the mountain is cover with fog and thin rain it means that Taranaki hide himself to cry his lost love.
Good story :-) 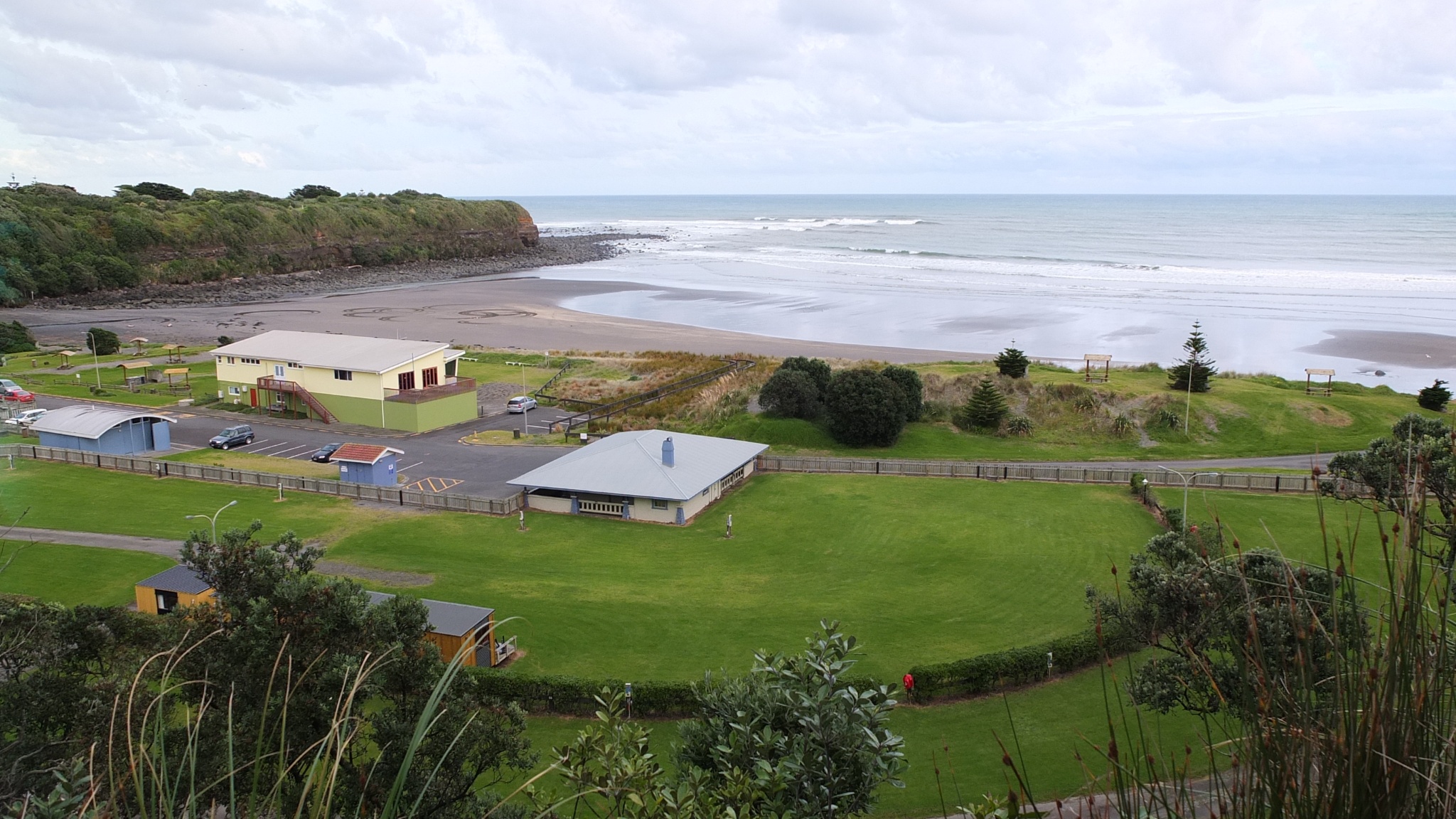 Let’s continue the visit now :-) This the beach of Opunake but I can’t see any surfer. What a pity! 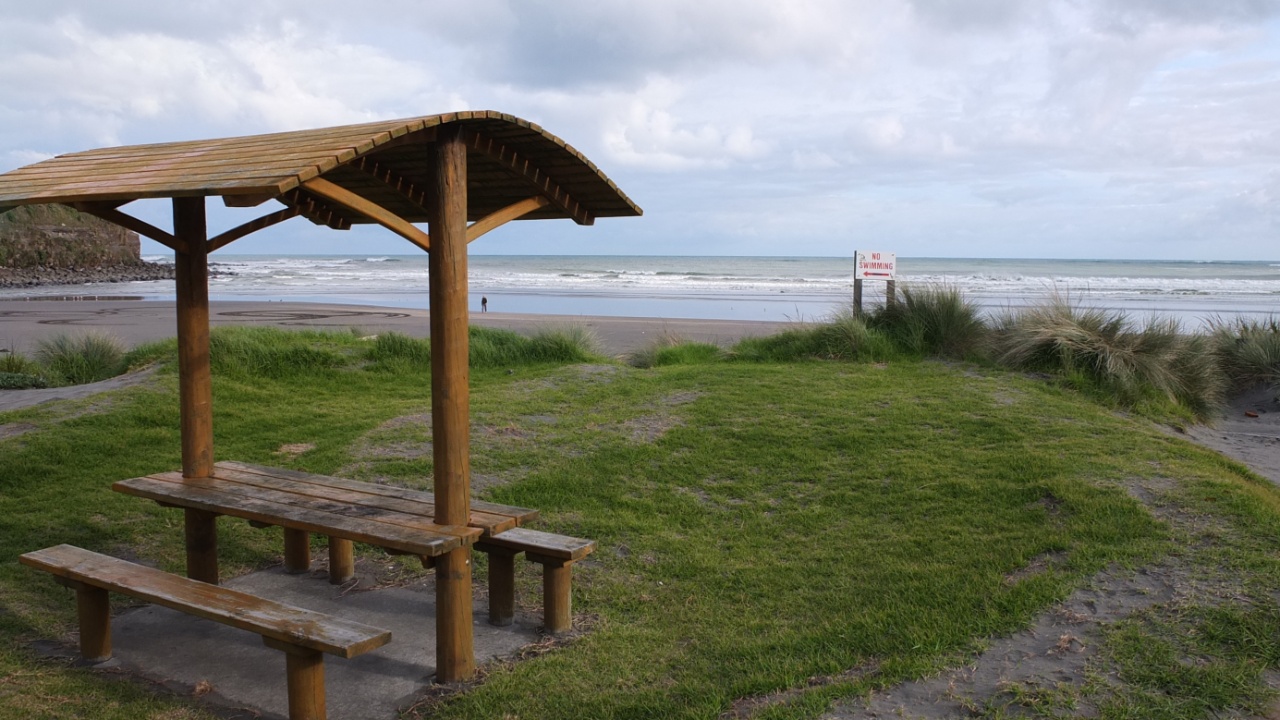 This is THE place for lunchtime :-) 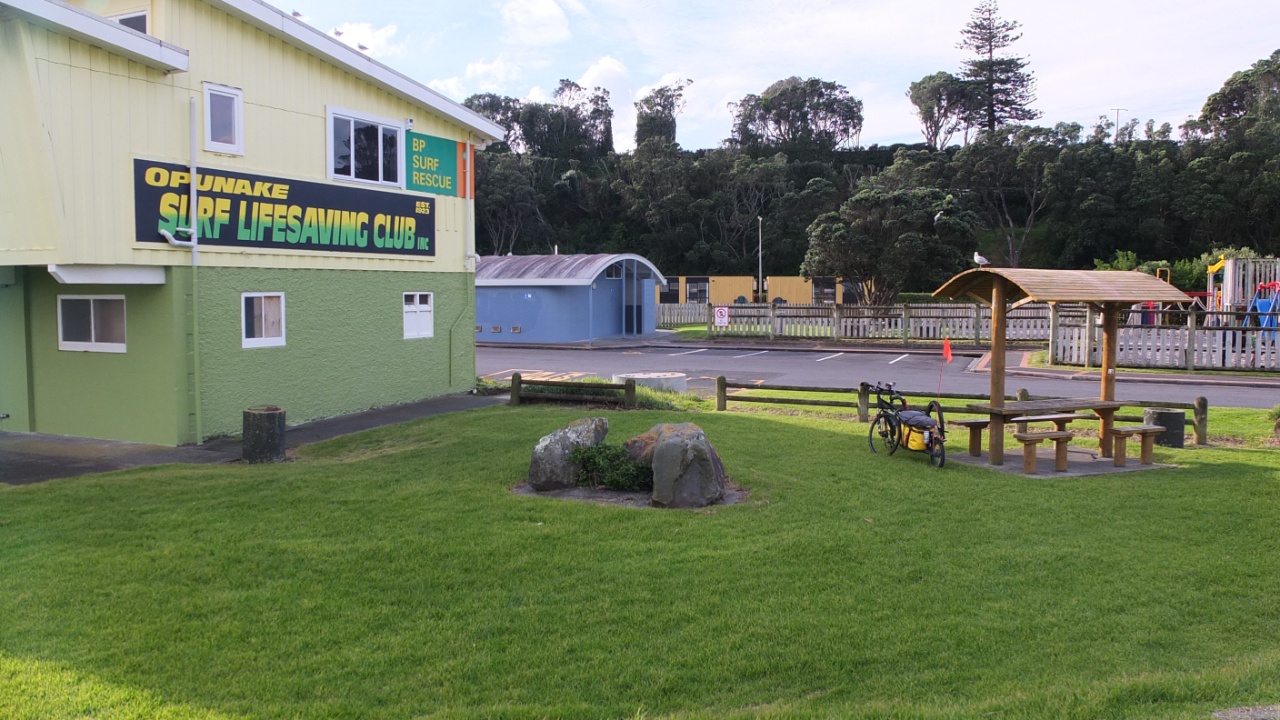 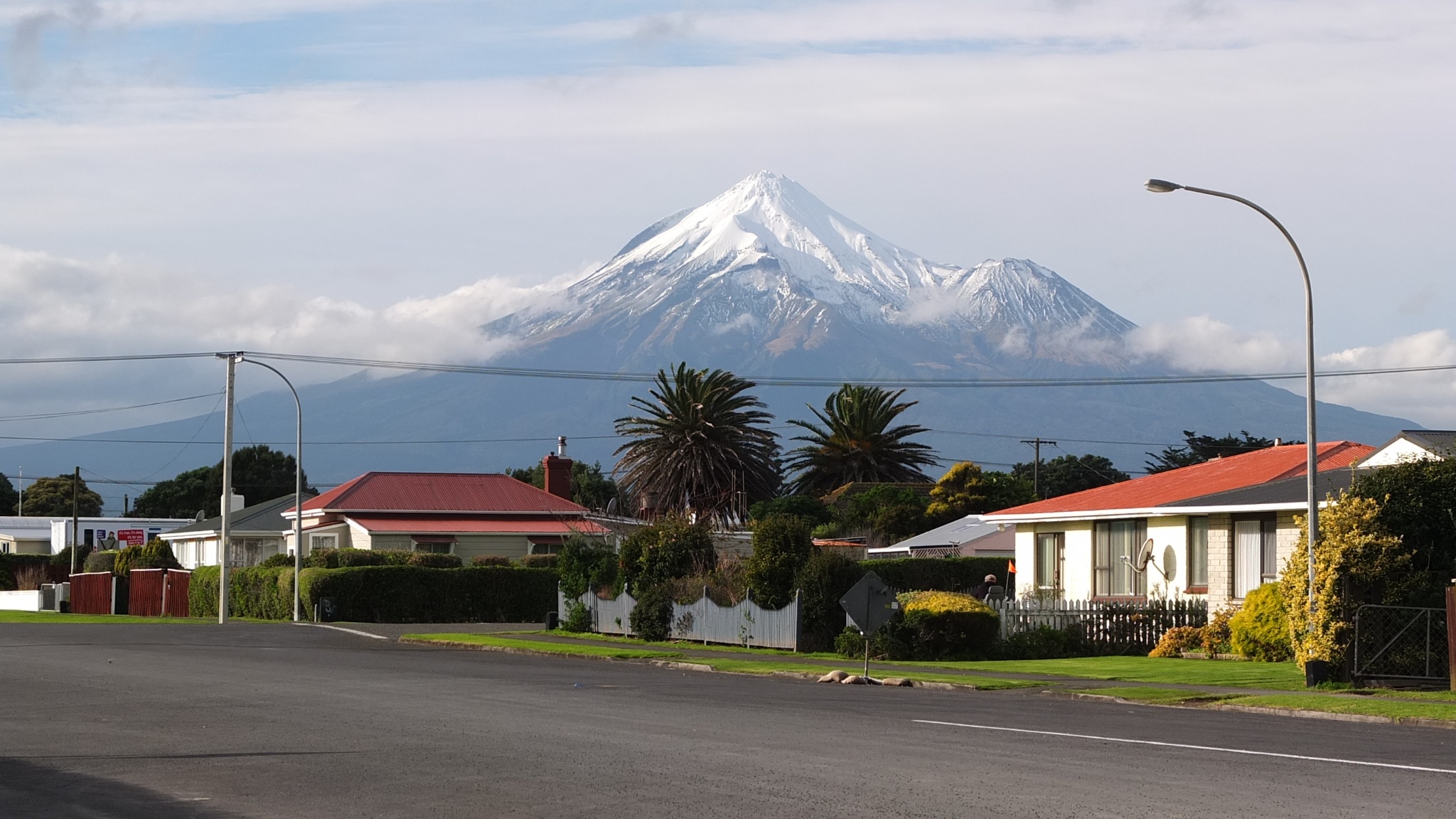 Even from opunake we can see Taranaki. 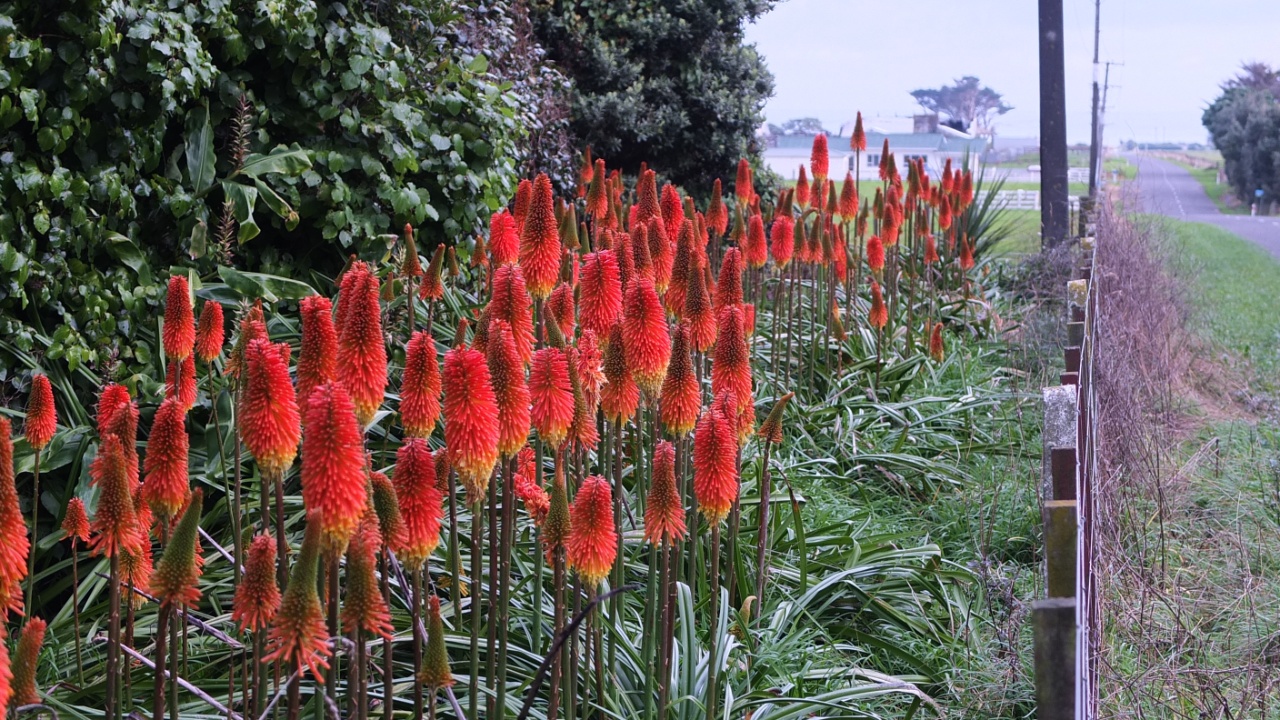 This is behind me. I’m now going back to the inner circle road to get closer to the mountain. 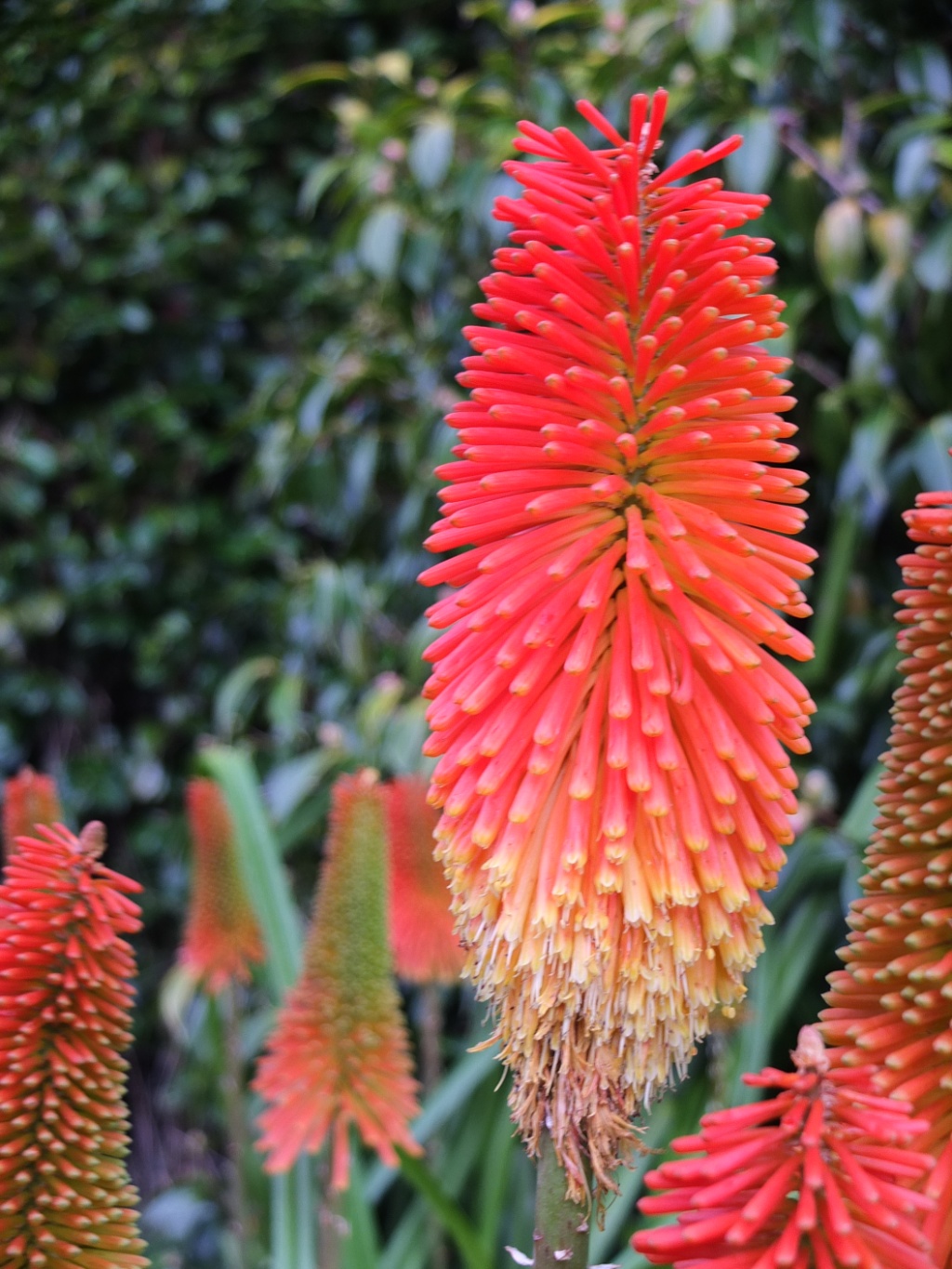 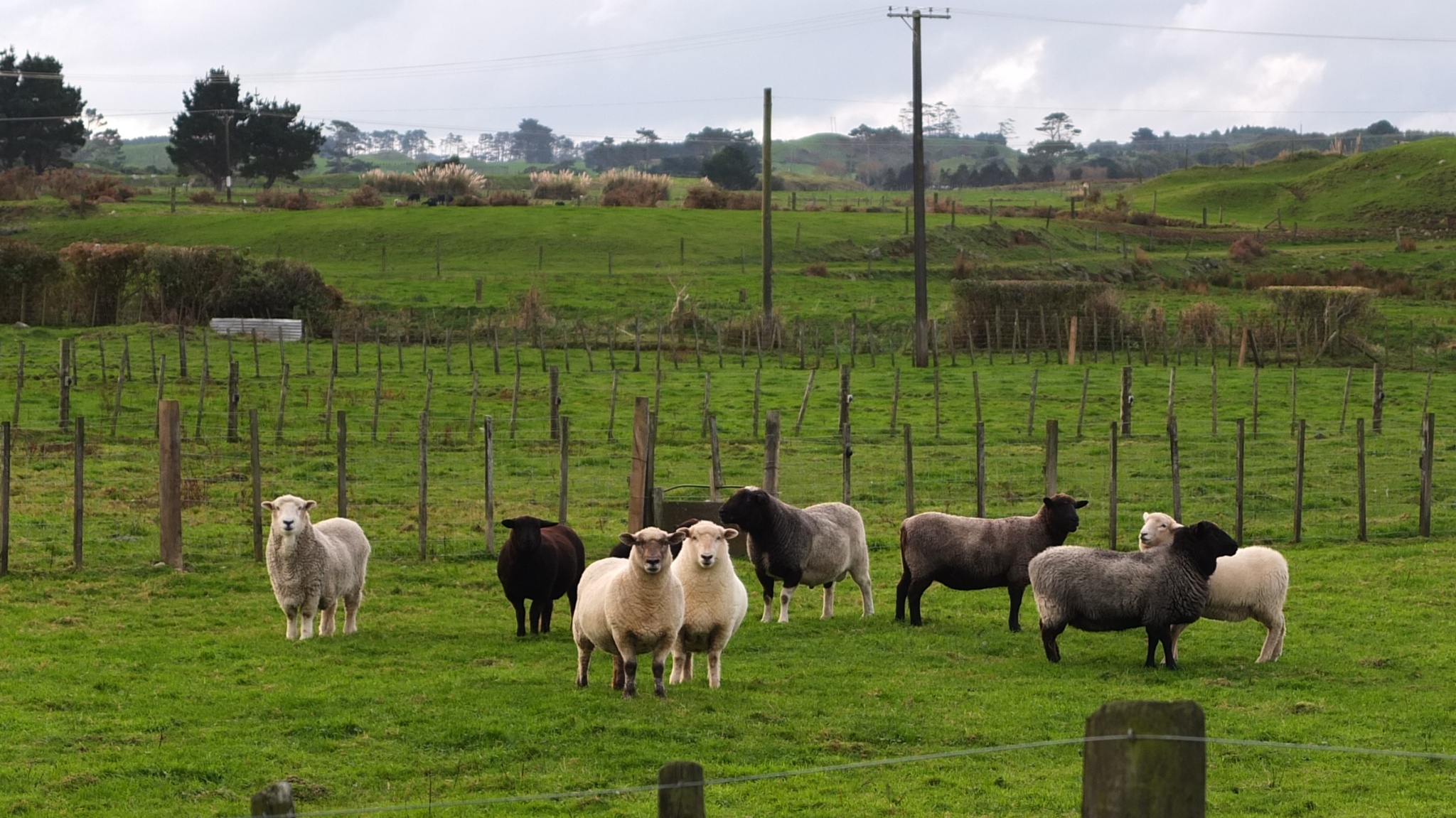 What did you do guys! You totally mixed together! 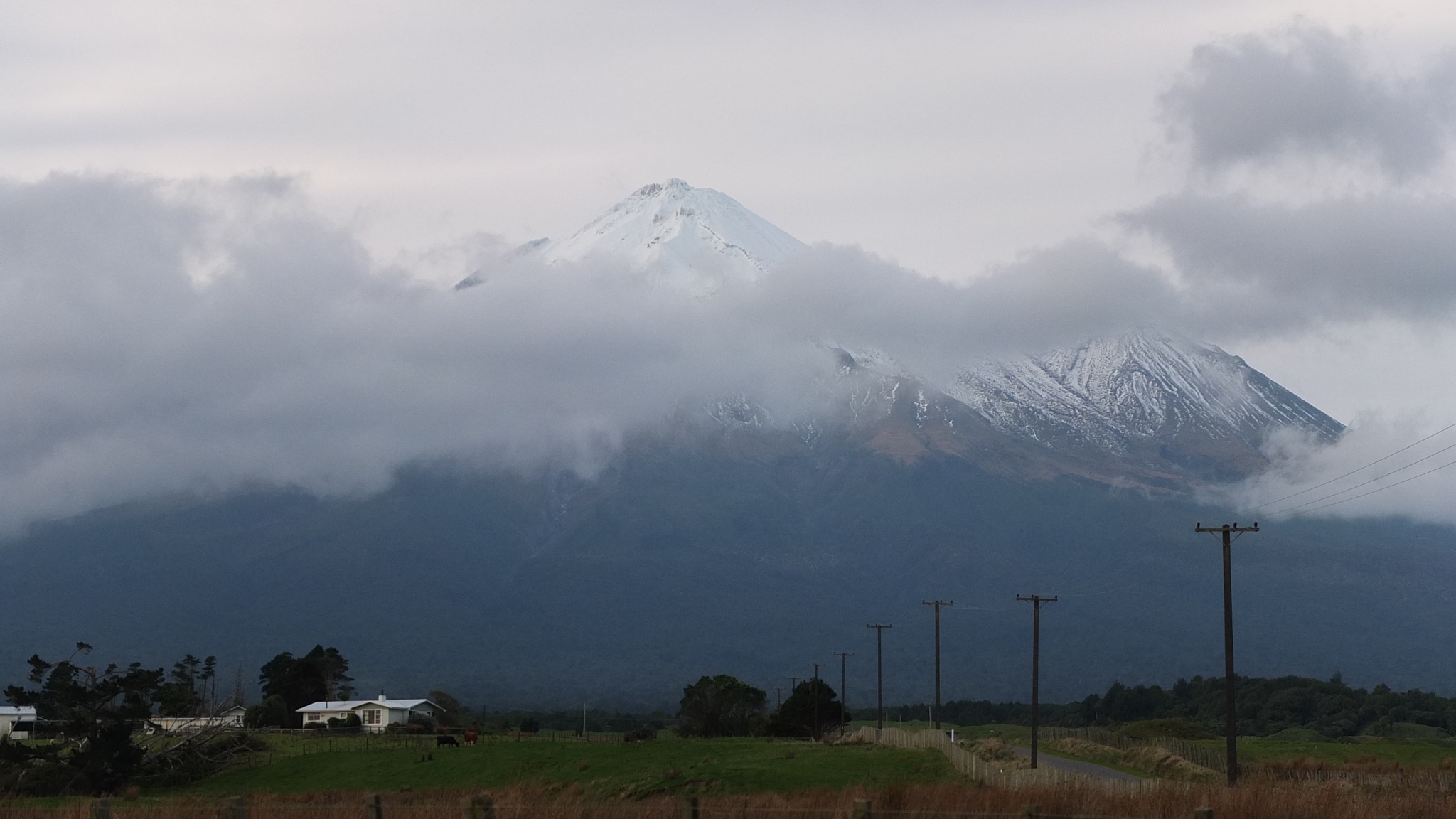 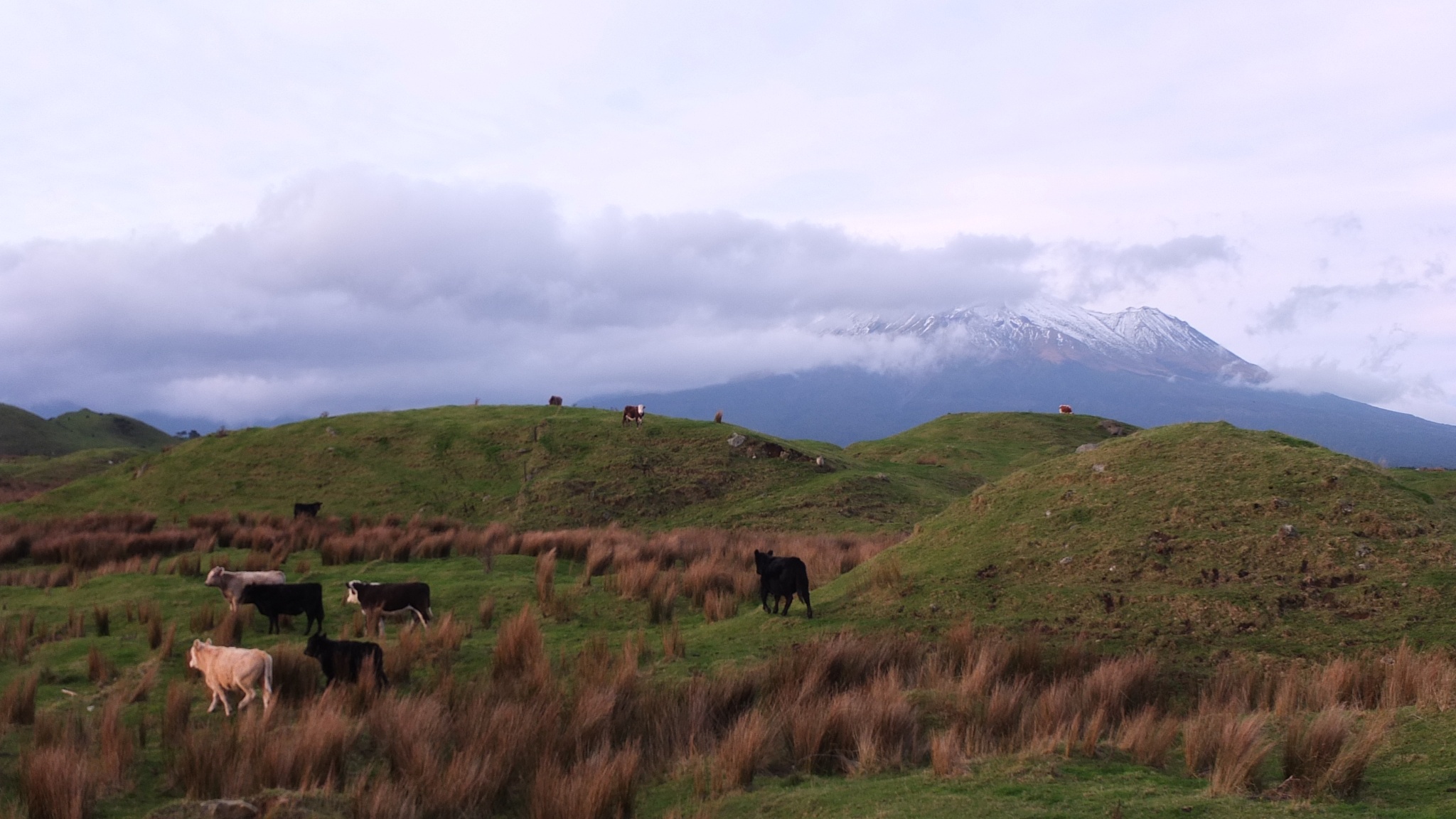 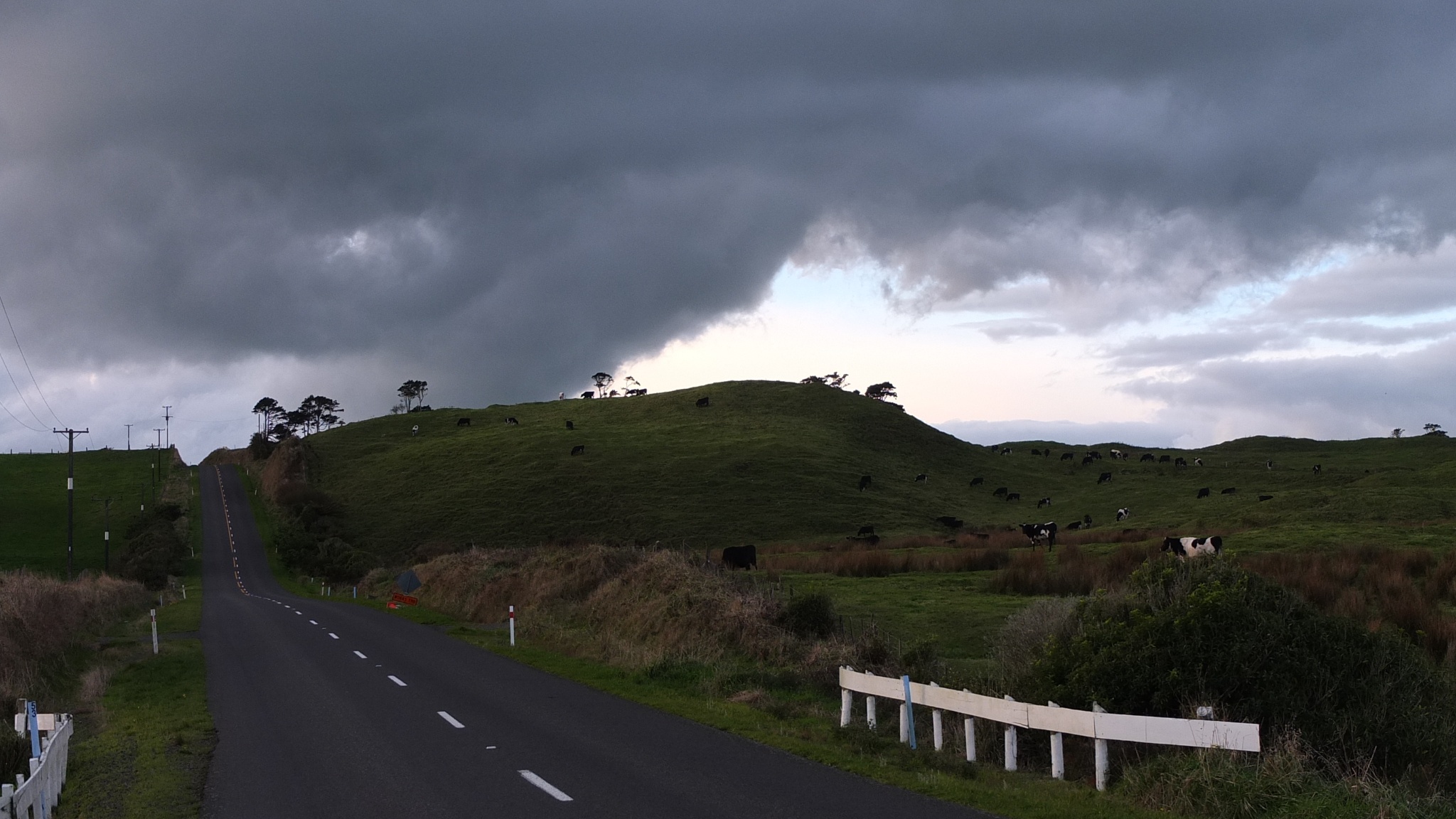 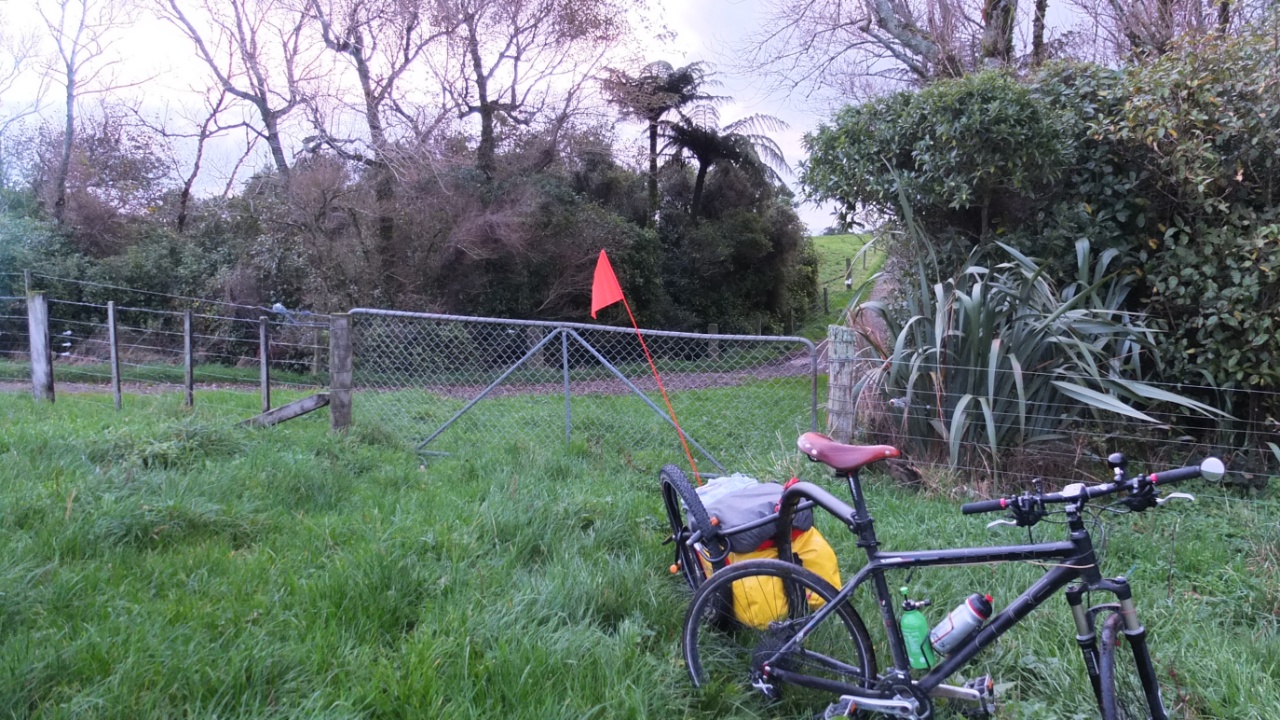 I was riding on the road thinking where to stop. I said to myself : at 5:30 I must find a place. It was 4:27. Three minutes later I looked at a field and this one looked fine. I opened the door, pass and closed it quickly. Then I ran behind the hill before another car appears. The first field was full of shit and I couldn’t find a flat area. So I opened another door and crossed this field where I am now. I should be alright for the night. 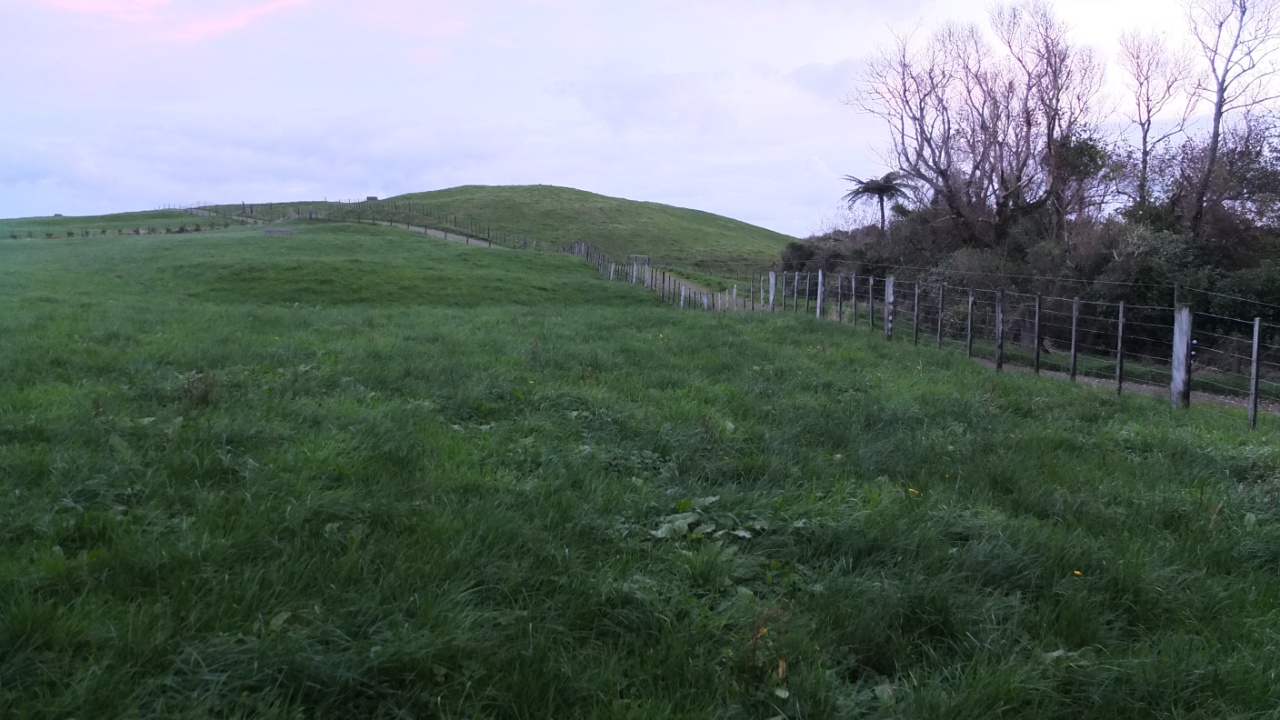 I’m in the middle of nowhere :-) Tomorrow I will certainly reach New Plymouth, the biggest city of this region. Good night!