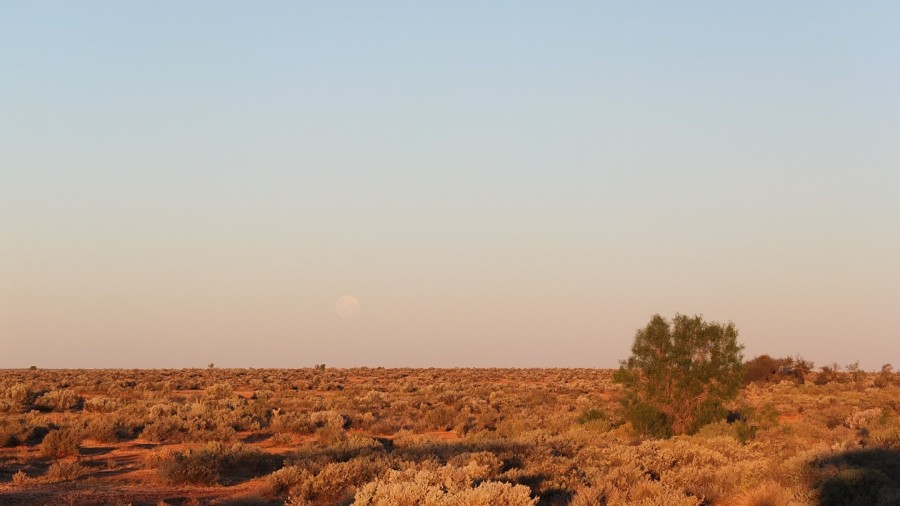 Today, I’m continuing this great adventure in the desert :-) I’ve got about 250km to reach Coober Pedy, the next big city which is far doable. I know there is two Rest Area with rainwater tank every 80km which is far doable. The wind is still against me. It’s light but it’s here. Anyway, I’ll make it. 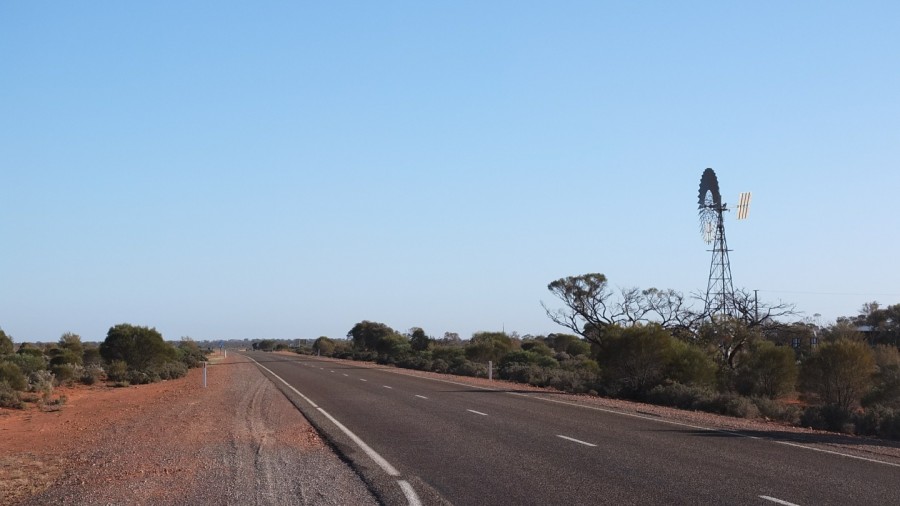 This morning I was ready at 8am just when an old local guy, a nice guy, came to me with his bike. We had a chat and I left finally later than I wanted to. But this is not a big deal :-) He had an old dusty mountain bike and a bag with him and he said, pointing the direction across the Stuart highway with his arm: “I’m going that way”. I looked at him a bit surprised and he certainly knew I would do that. I said: “There is not much there”. He told me that between the highway and the railway. Lots of stuff is left on the ground. There is generally rubbish but apparently, lots of useful things as well. So, he was going to pick up stuff, cans, glass and I don’t know what else. So on this picture above, I’m now going straight when I’ve seen him crossing the road and go on the left side through the bush. Why not :-) 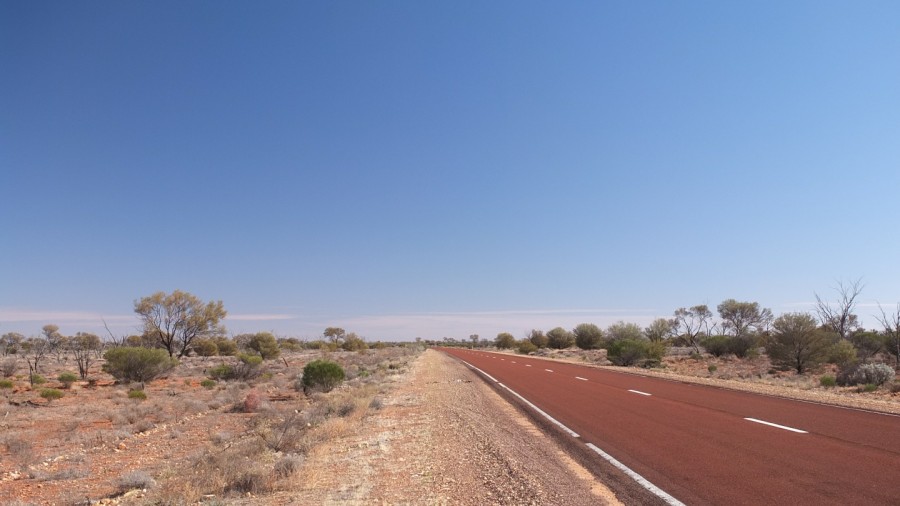 And again cycling on the desert :-) 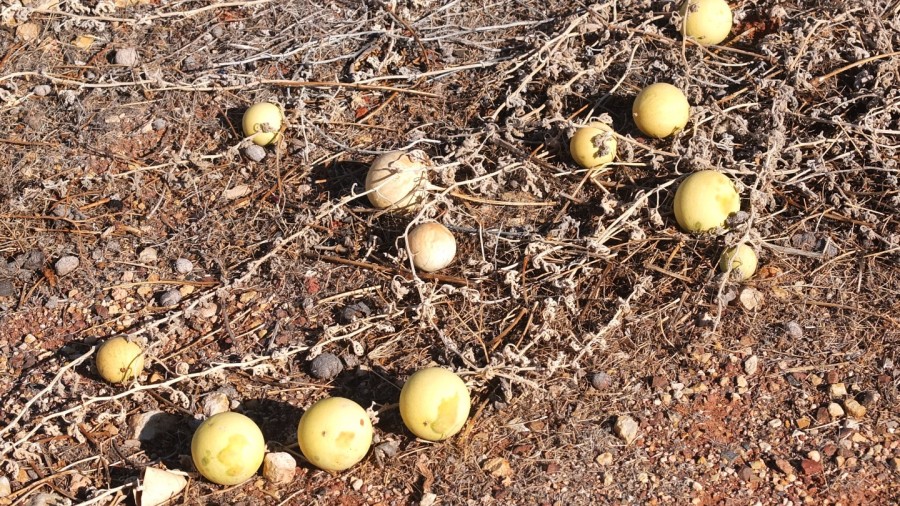 I’m wondering what are these… Fruits? Veges? eatable? 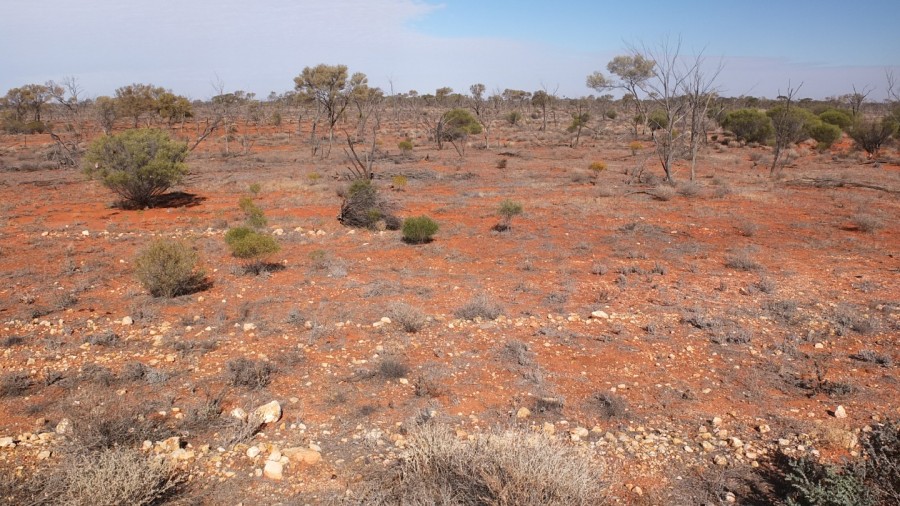 That’s the kind of view I’ve got today.

Houuu, there is a valley coming :-) 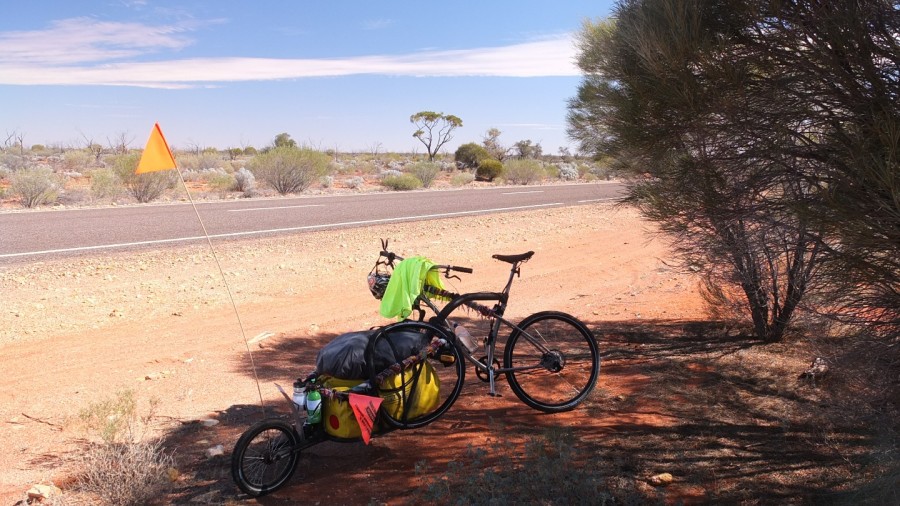 Today is pretty hot to every hour when I see a nice tree, I stop under to have a short rest. 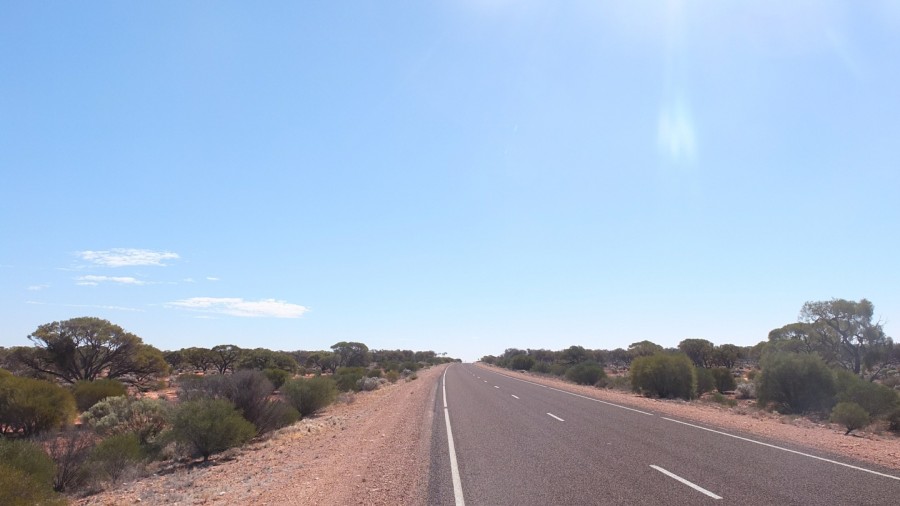 The landscape doesn’t seems to change a lot but it does actually. It come from really arid area with only short grass to other areas where there is short trees. Sometimes, trees gets bigger and then it’s coming back to nothing again. 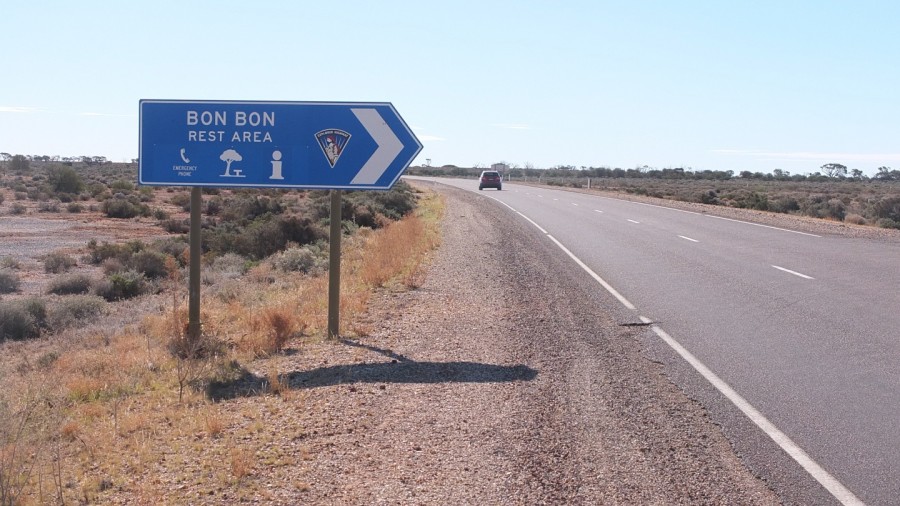 That’s it for today, I’ve done about 80km and reached Bon Bon rest area which has a water tank (with water in it I hope). 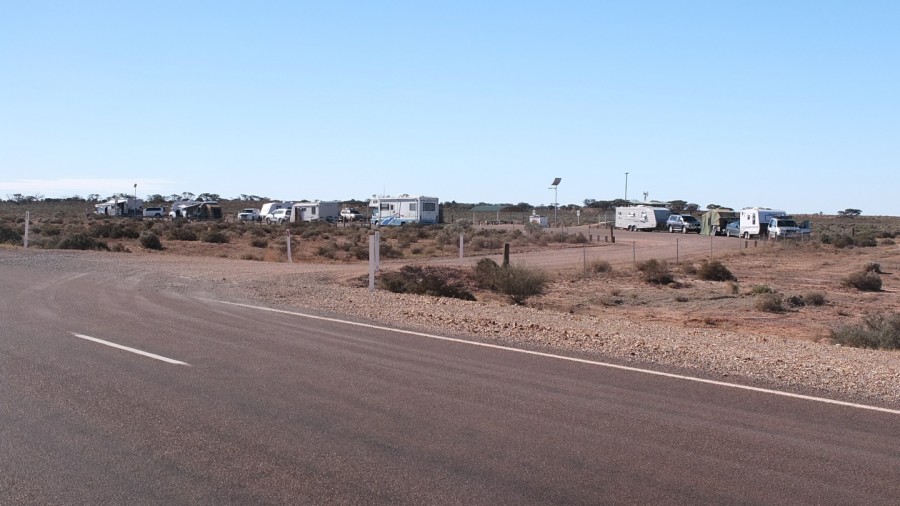 As I knew, it’s a common one and many caravans are there al ready. 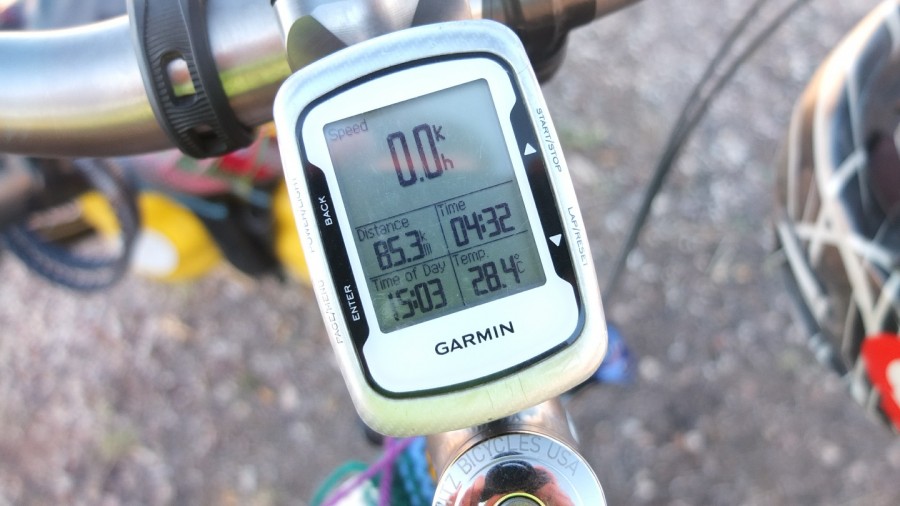 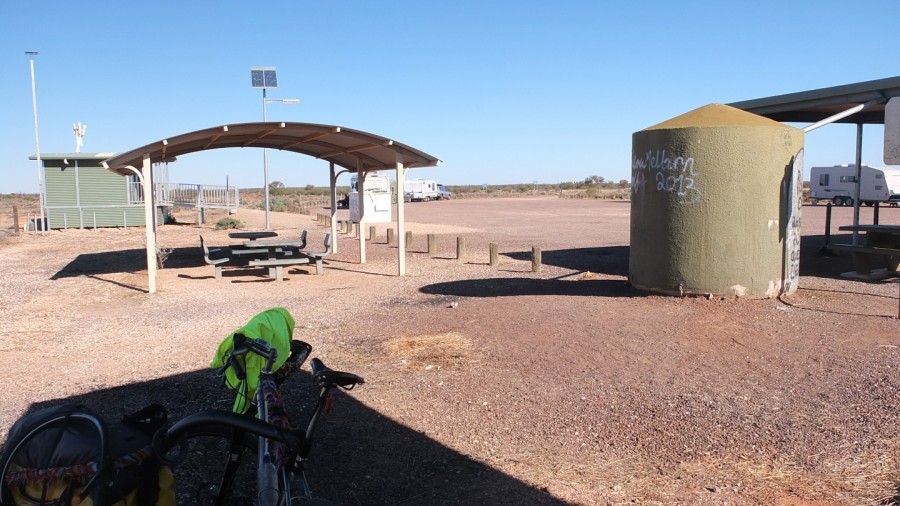 There is toilets, water and tables. Just what I need to feel in a five stars hotel :-) 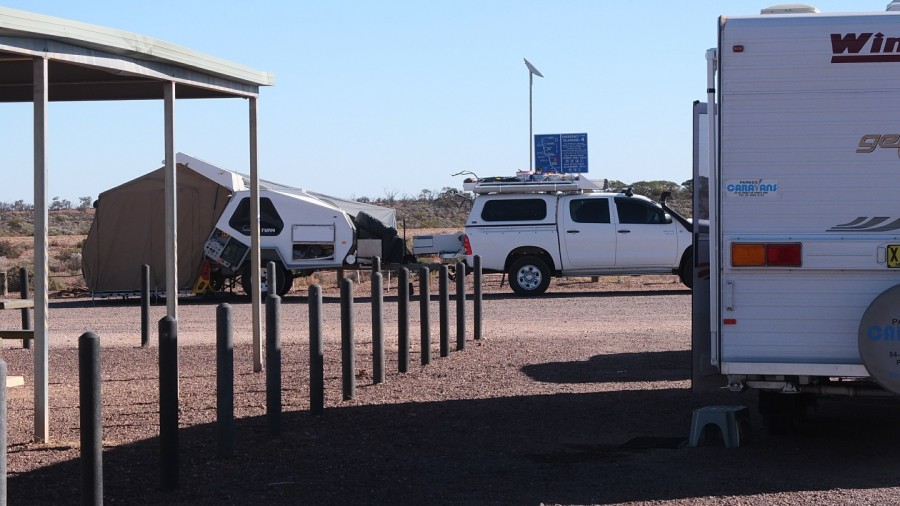 There is some impressive trailers here. 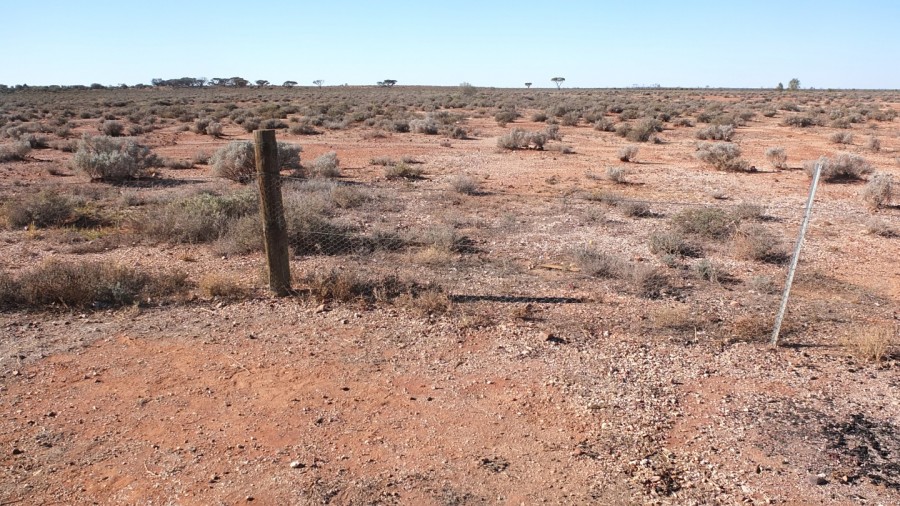 And this is my spot for the night!

Just now the moon is at the same height than the sun on the other side. 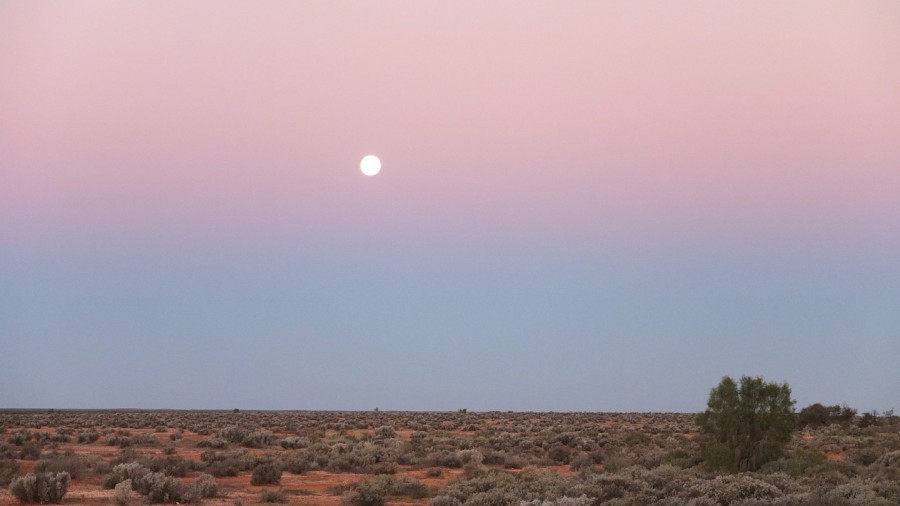 I’ve met quite a few people in that rest area. Just when I came in, 3 couples arrived and had a break. They offer me a cup of tea and some cookies :-) Then I talked a bit more with the guys who was staying here at night and finally after dinner, we stayed together around a fire with another neighbor :-) It was a really nice evening! Good night!