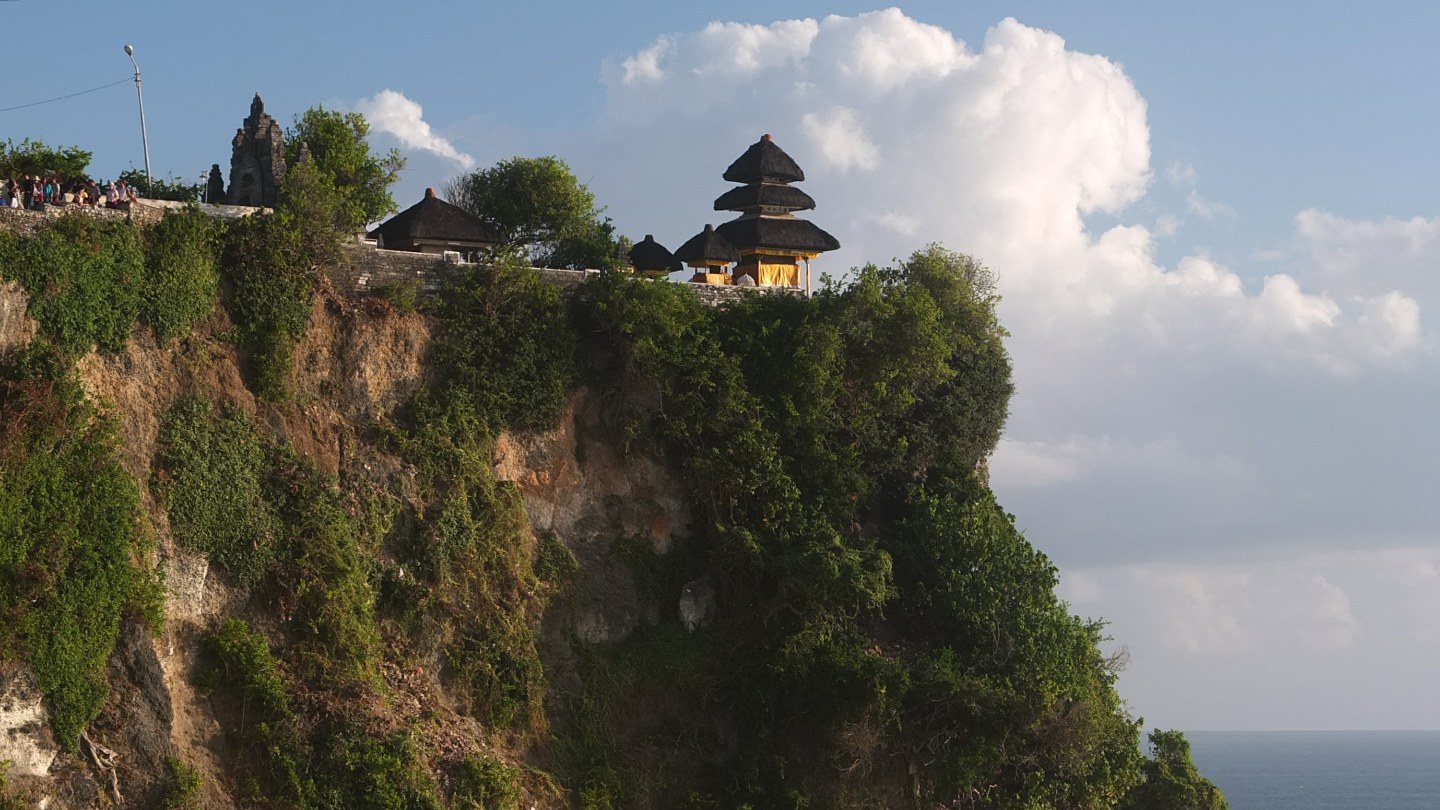 Last day with my family visiting Bali. Max and I stayed a bit longer and wander around the peninsula for few hours. We had a drink at the beach then visited the Uluwatu temple which is on the west side of the peninsula. There was some more monkeys who were more aggressive than the one we have seen until now. One of them stole the glasses of an asian guy! He came too close to the fence to take a picture. This monkey did not like it and grab his glasses. I picked up a empty bottle, bring it to the monkey to make diversion and take the glasses back but it did not work, unfortunately. Glasses lost… 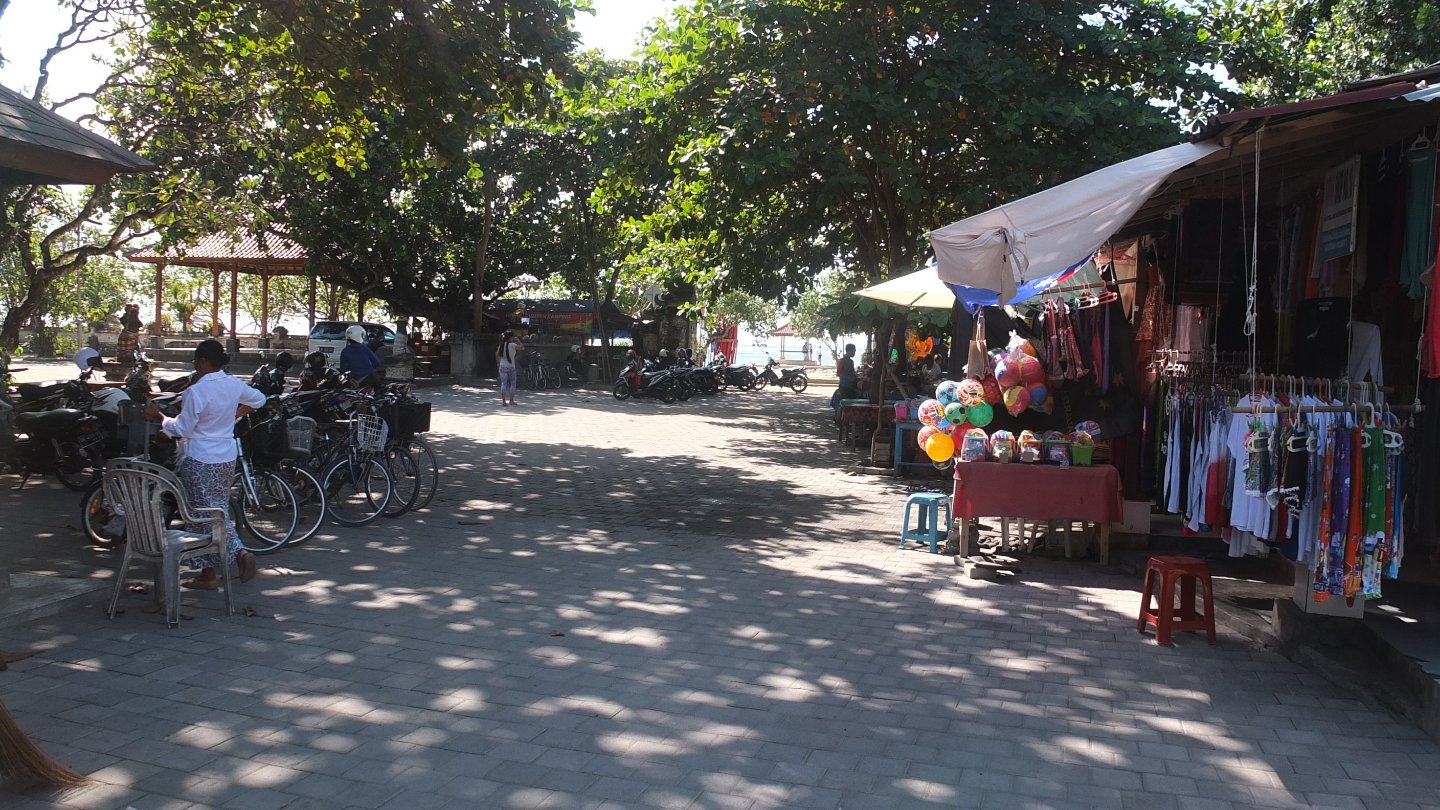 We are now driving back towards the airport. We have stopped for the first time this morning and we expect to see a nice beach. I’m still looking to buy inner tubes for my bike. The woman on the left side is renting bicycles. I’ve asked her if she is selling inner tubes. She didn’t really but tried to sell me one at 250.000IDR. Sorry? What! Another guys two days ago when we were in Candidasa would sell me one for 40.000IDR. I tried to bargain and she said “no, this price or nothing”. Okay, bye! Some people really abuse on tourists. 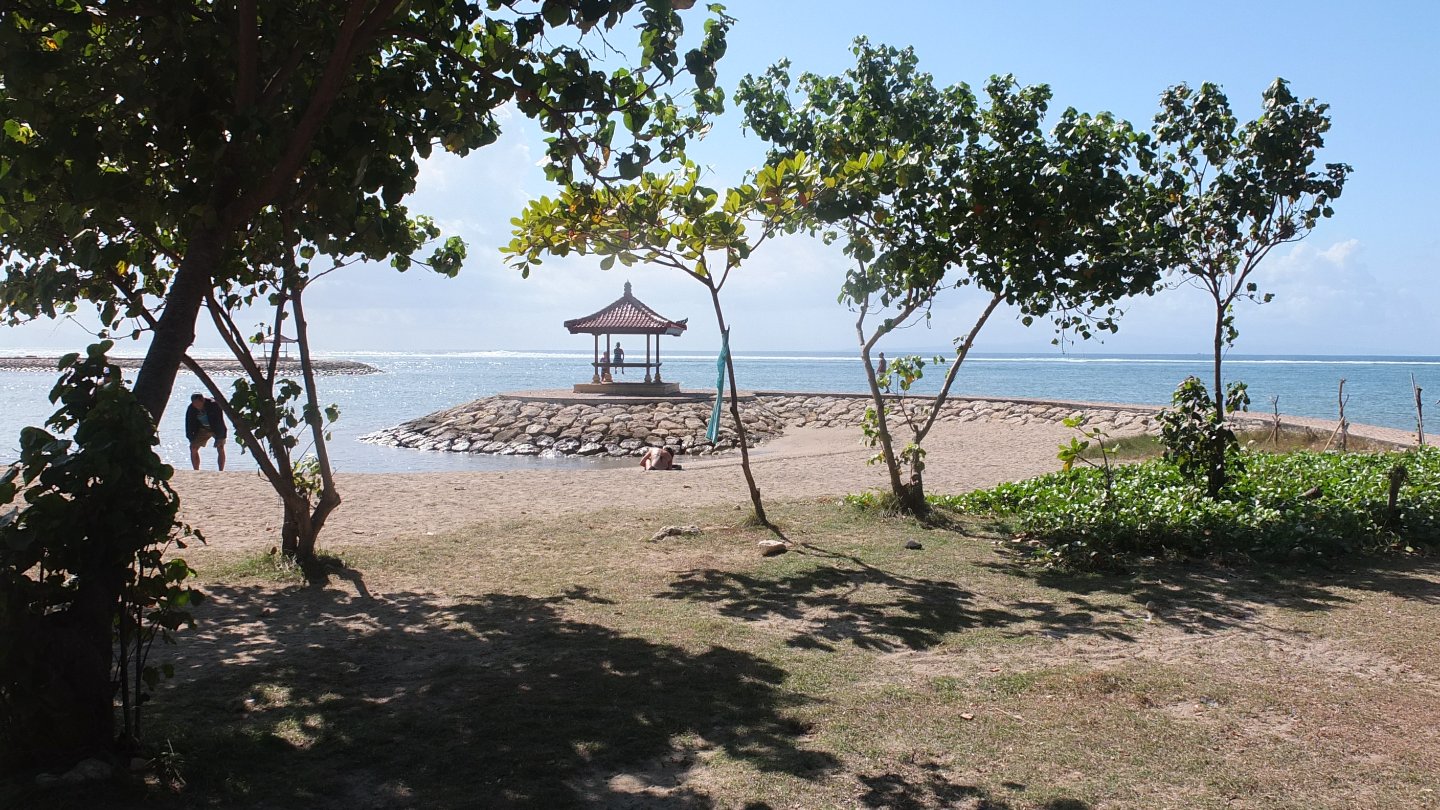 This is the beach of Sanur. 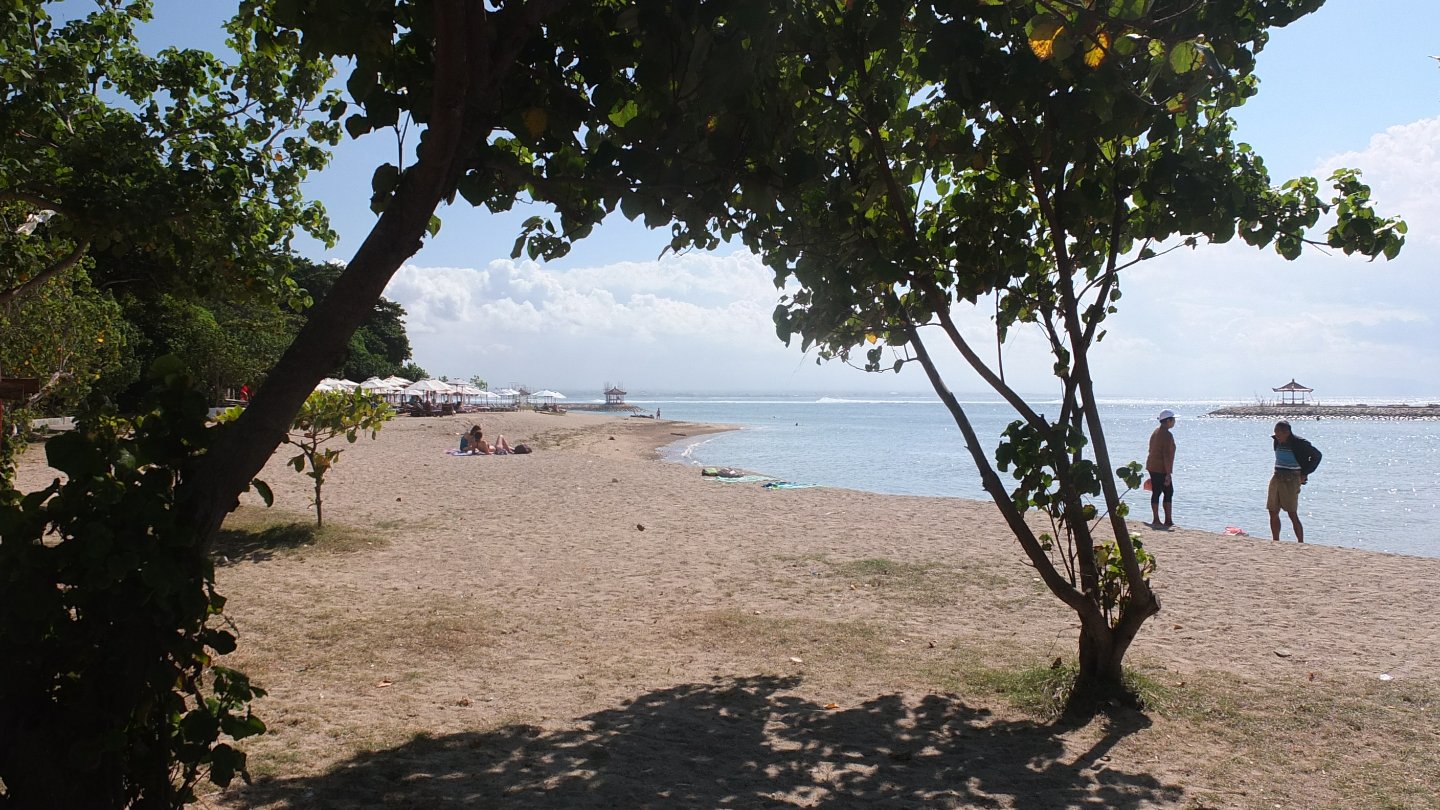 Not much people here. 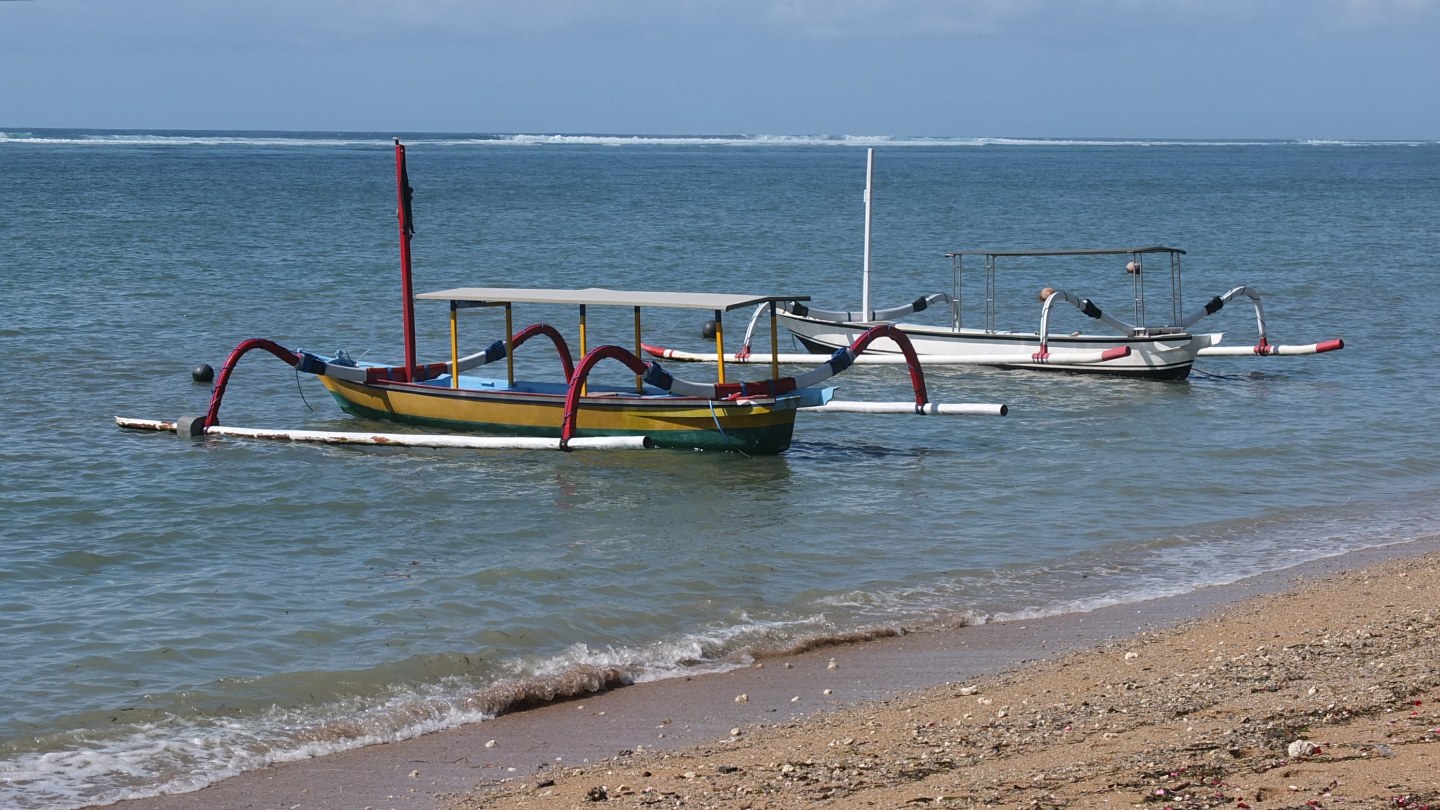 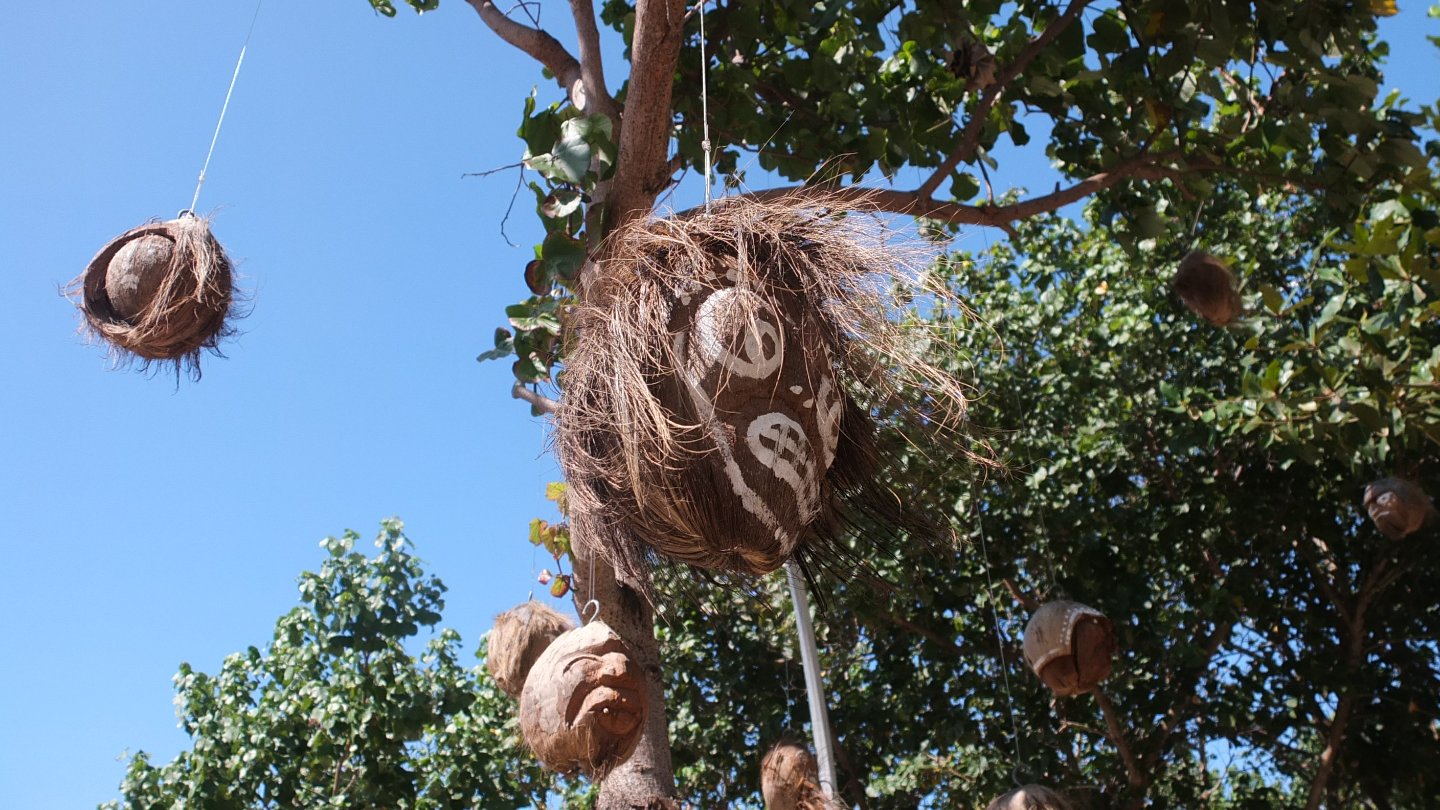 “Coconuts heads”. I don’t know what they are for. Decoration? For threatening the Devil maybe. 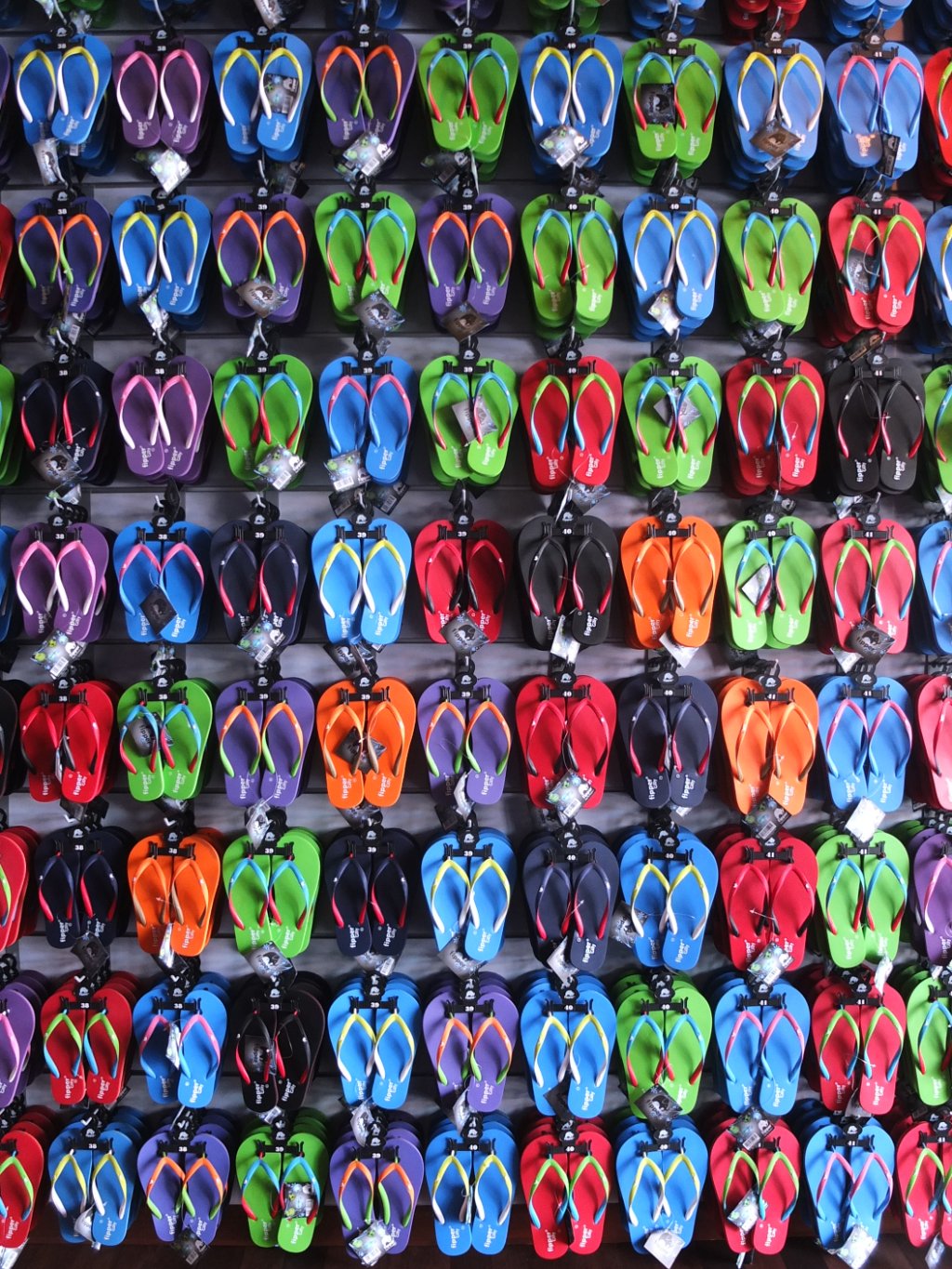 The tongs I bought a week ago are already done. The sole which used to be 10mm is now reduced to 2-3mm and it’s very uncomfortable for walking. It reminds me that this guy asked 400.000IDR for those! Such a rip off. We found the same shop again where Mum and Max bought some pair of “Flipper”. They have a huge amount of different colours and 4 different models and they cost 95.000IDR ($9.5AUD). I wish I could buy on left and one right separately but I cannot (or I should buy two pair). Thanks Gilles for this ;-) 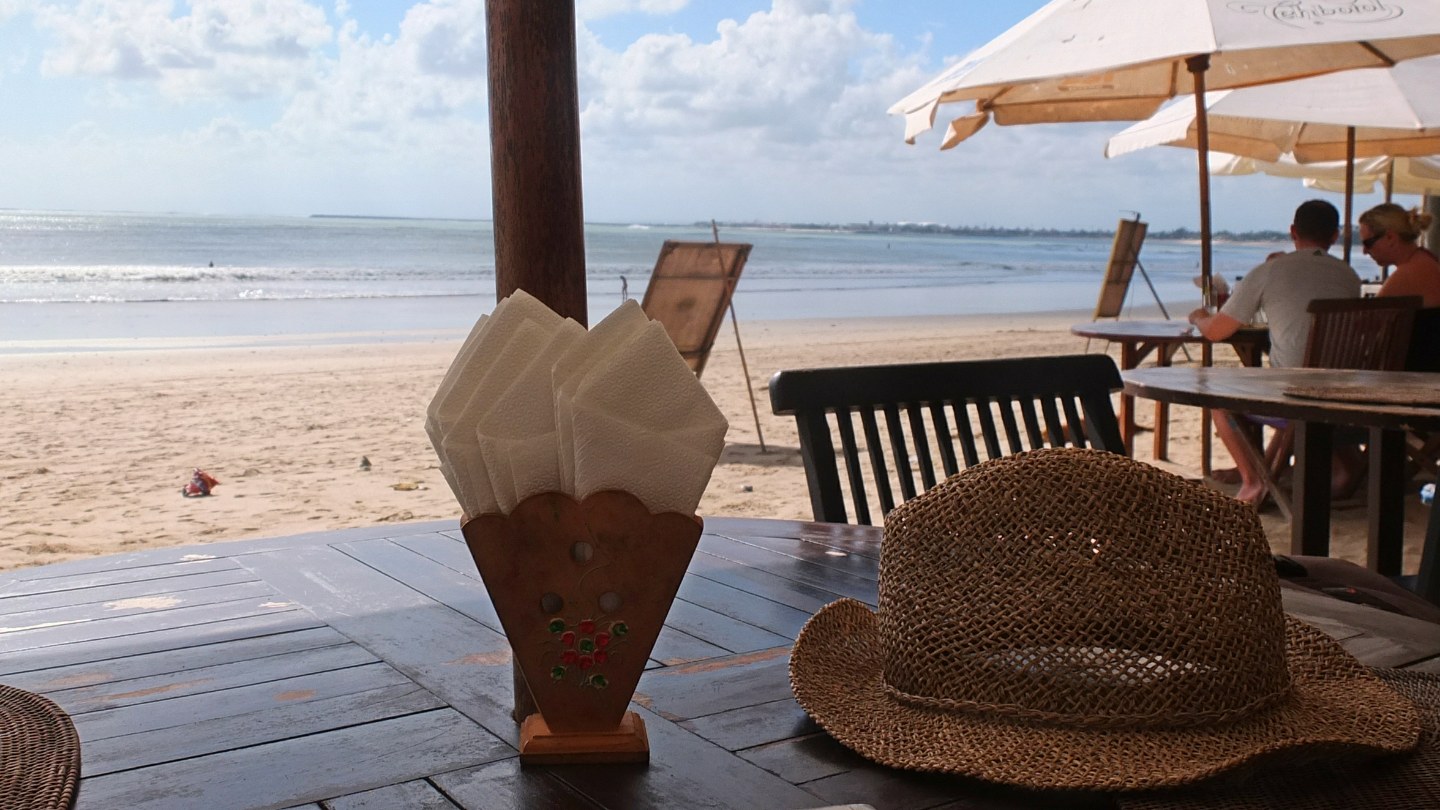 We finally went to the airport and let Mum and Gilles get their flight. Bye Bye see you later :-). Max is leaving in 4 about hours so we decided to have a look to the peninsula and found a spot where to have a drink first. 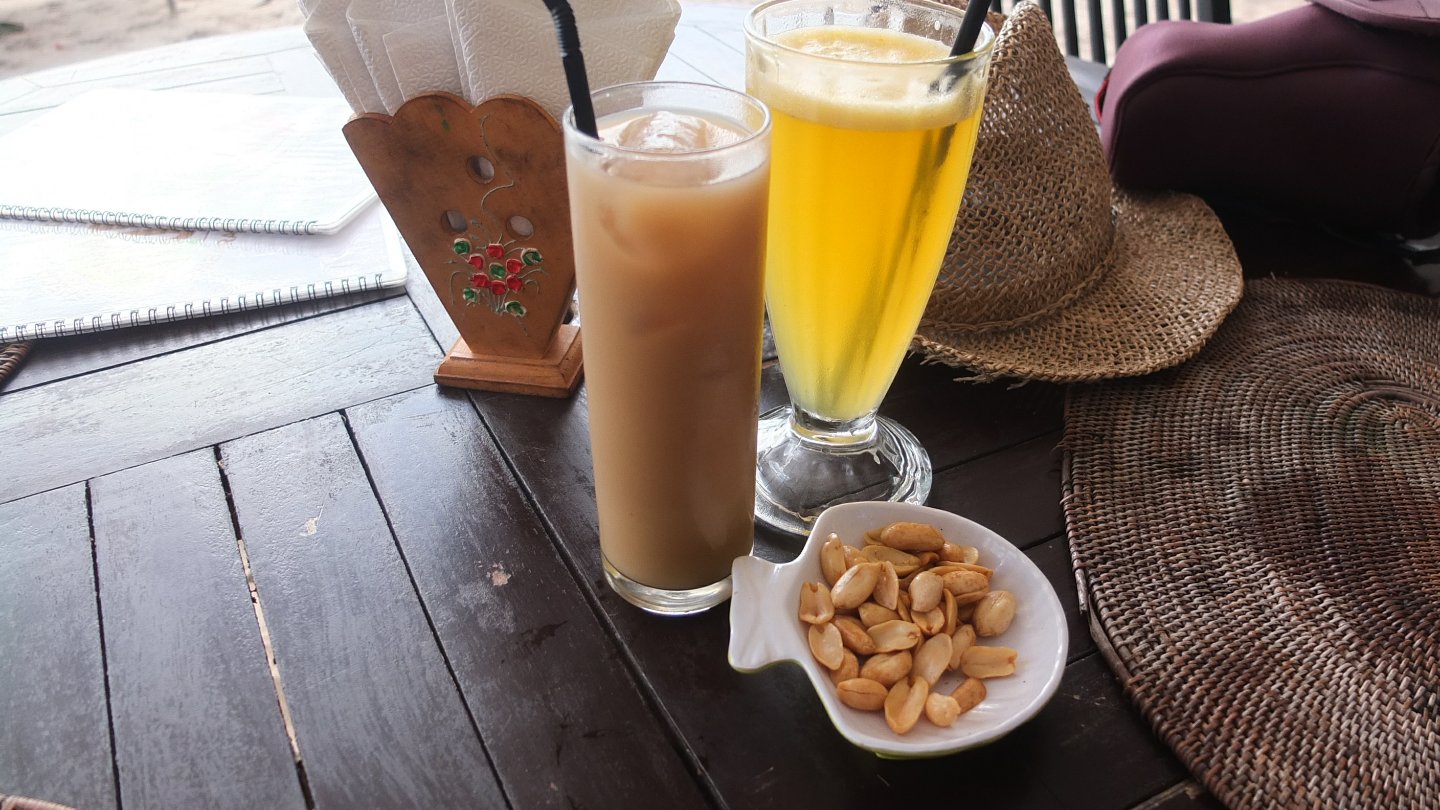 Look at this Gilles. During the last 10 days you asked for peanuts everywhere. This time, we did not ask for anything and here they are! ;-) The balinese peanuts are a bit different than the one we have normally. They are a bit more dry and more crunchy. Delicious! 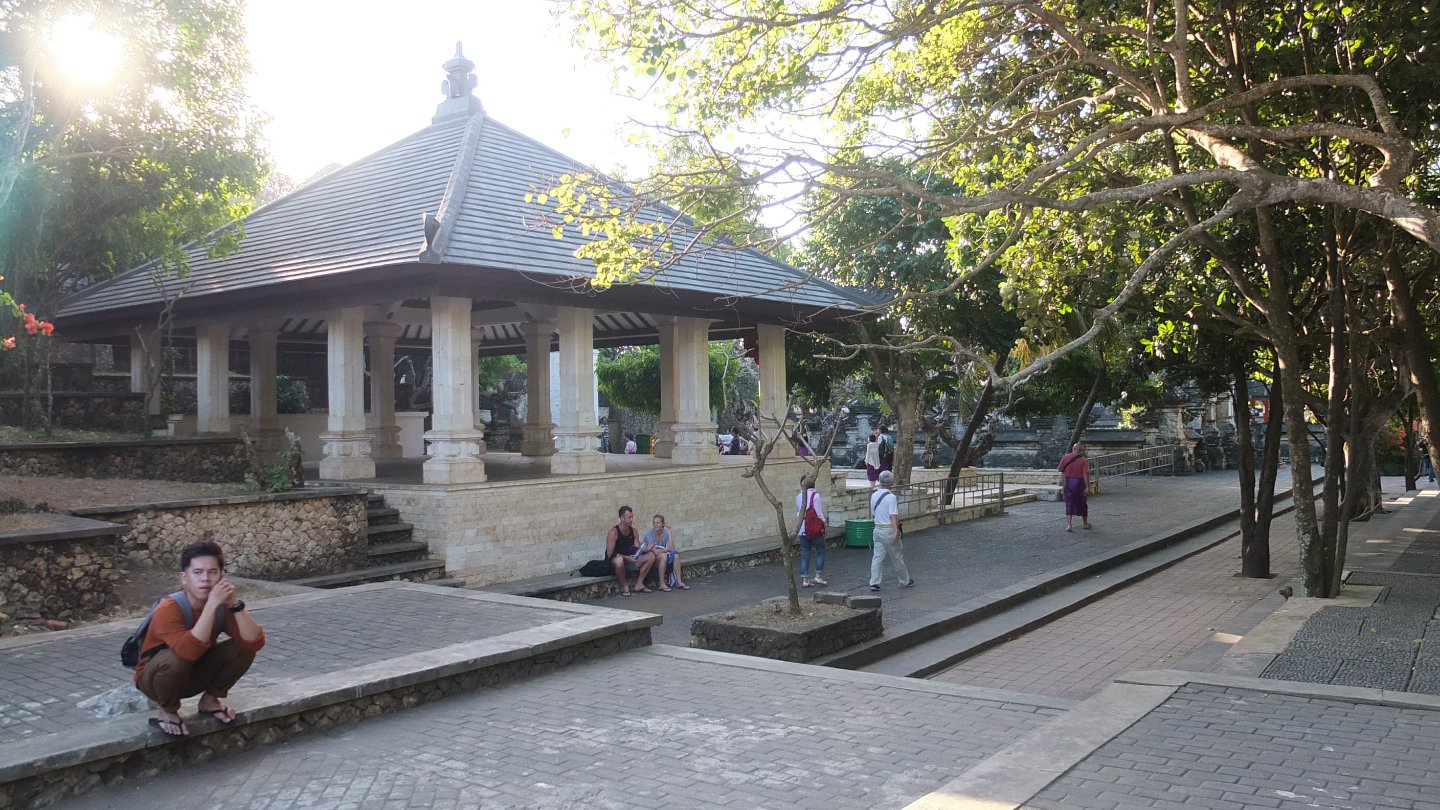 We are now at Uluwatu temple. It’s full of tourists here. 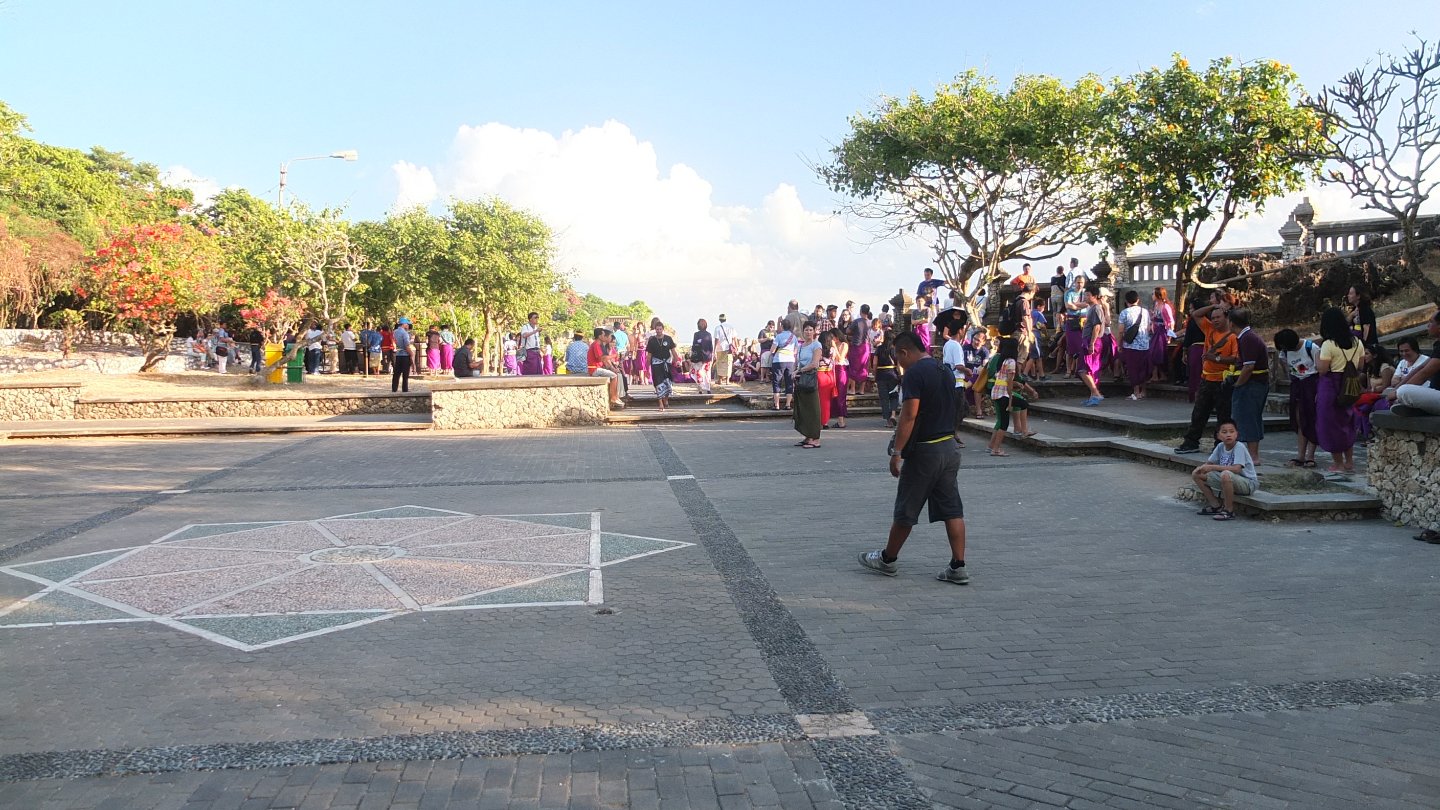 People in shorts must wear a purple scarf around their waist to cover their legs. (Just writing that and I can see that the guy front of the camera doesn’t have one haha). And if we have a pair of trousers we must wear a golden scarf around the waist. 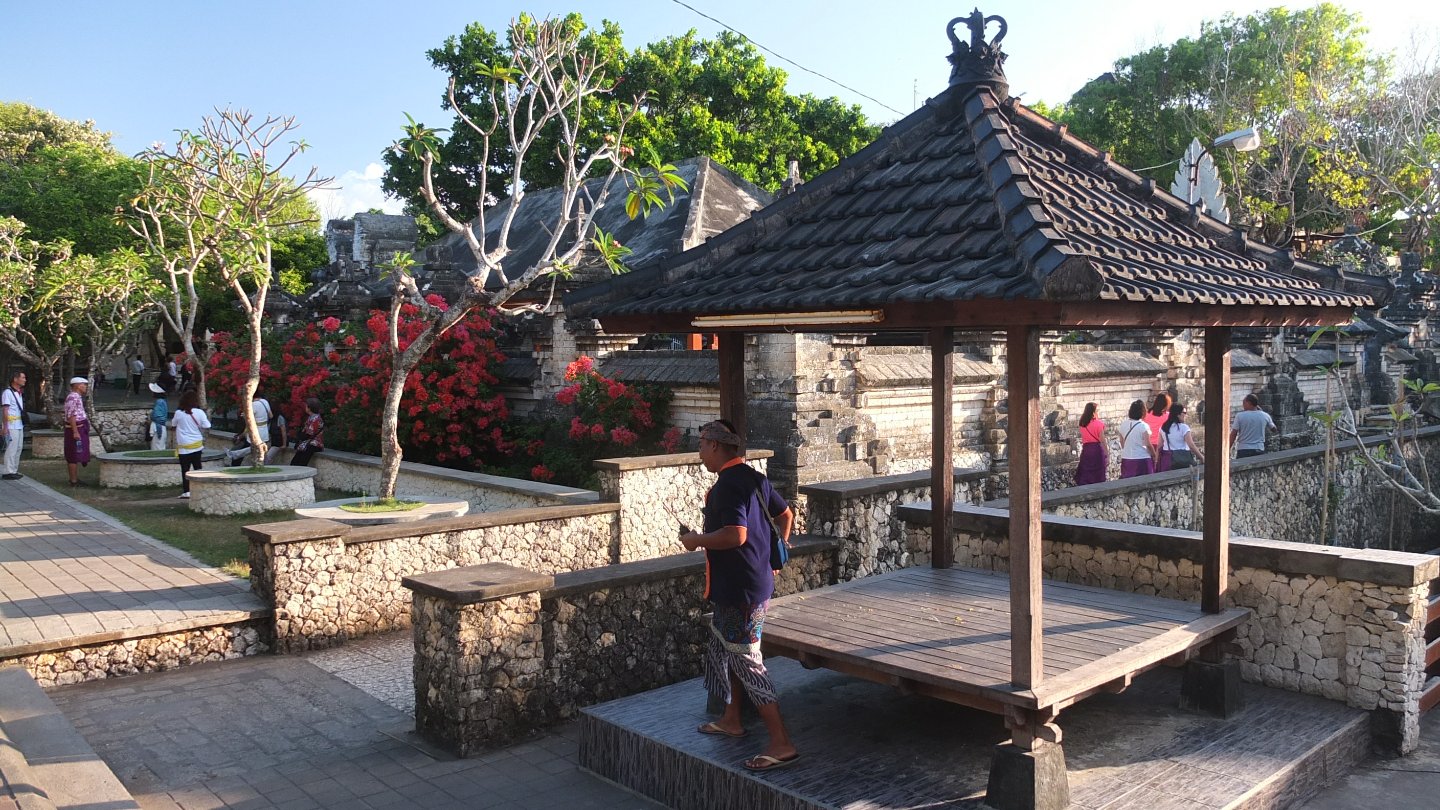 This is a part of the temple. 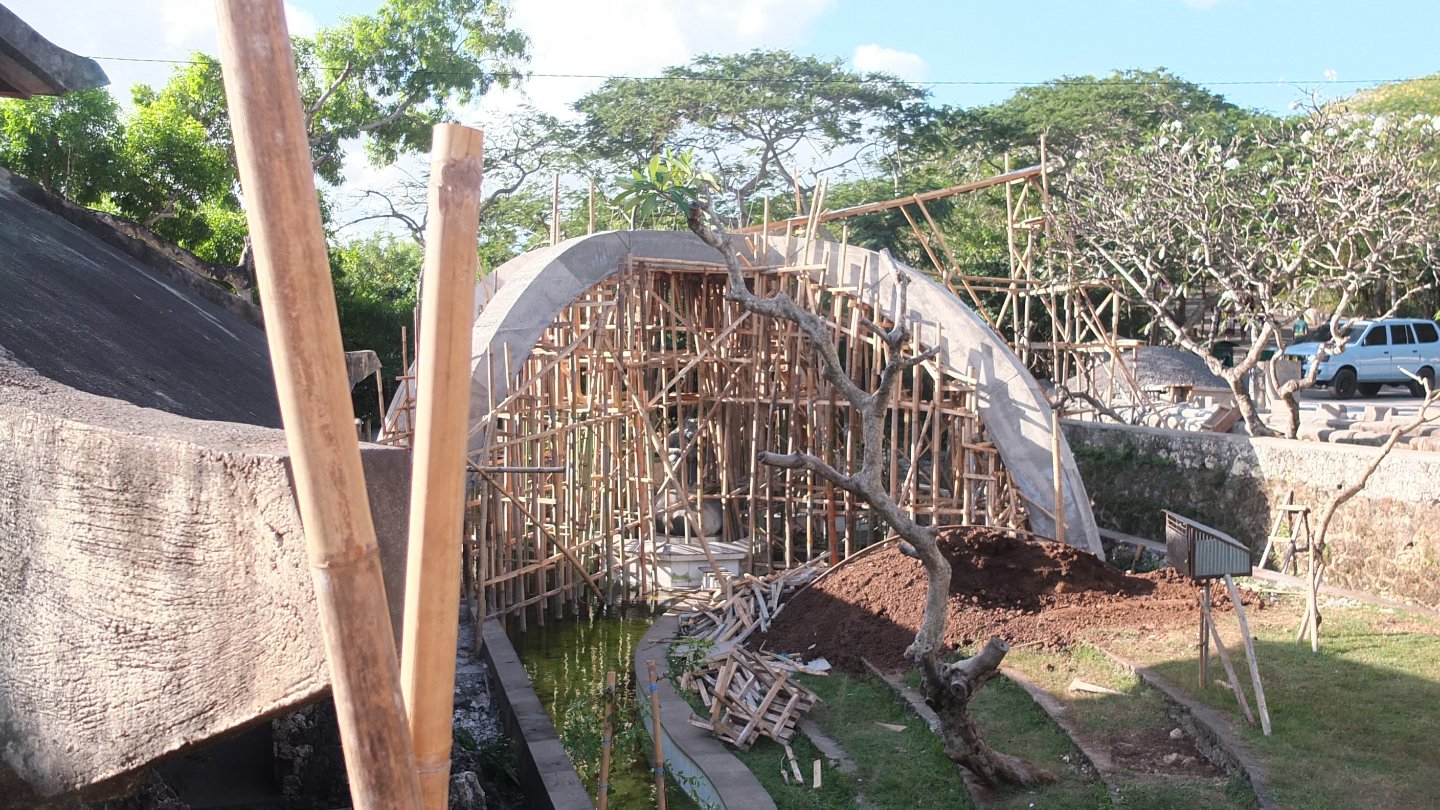 Here they are extending it. I like the bamboo scaffolding :-) 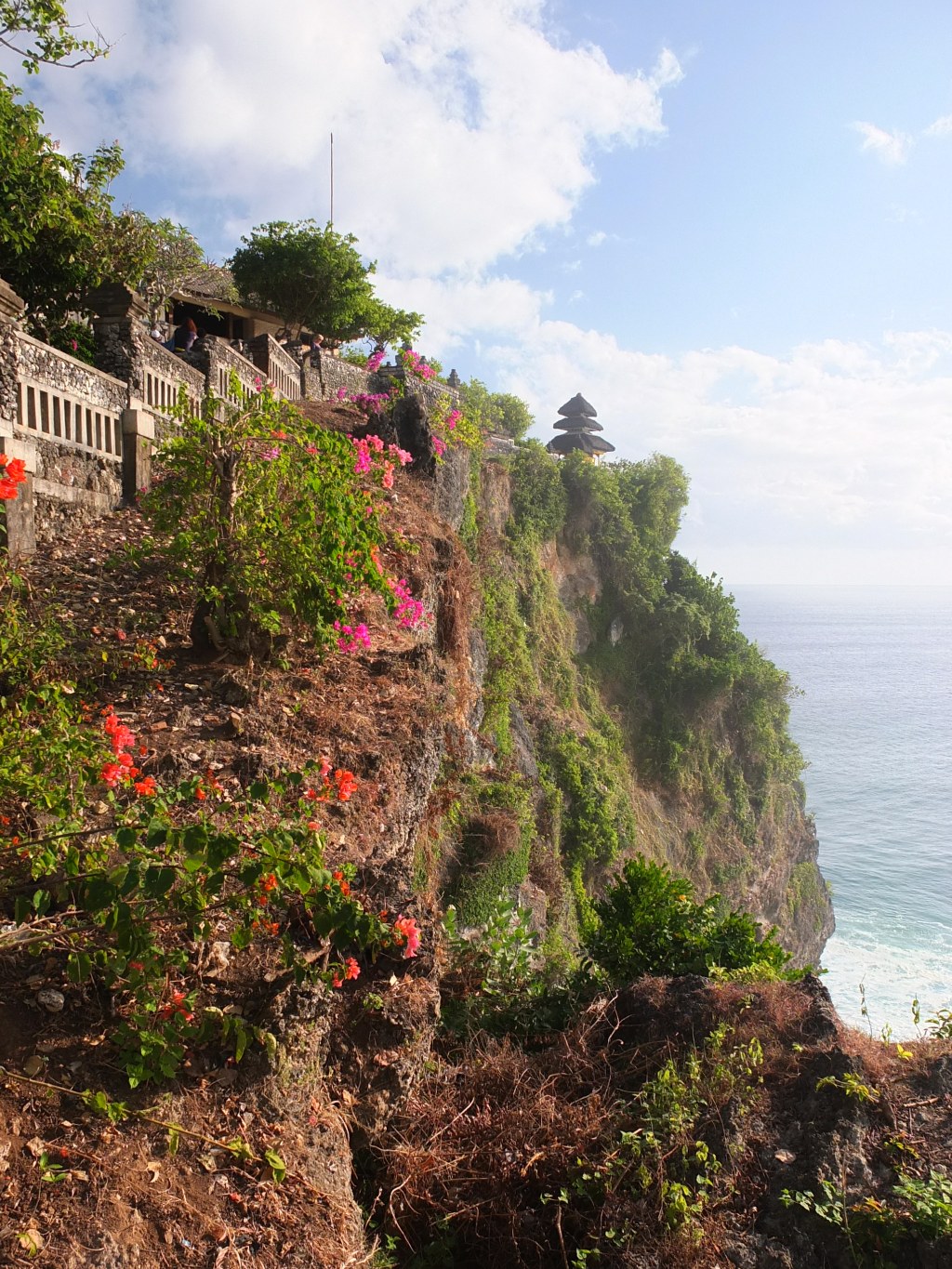 This is the main Uluwatu temple. The place is not accessible by everyone. They certainly keep this site for ceremonies. 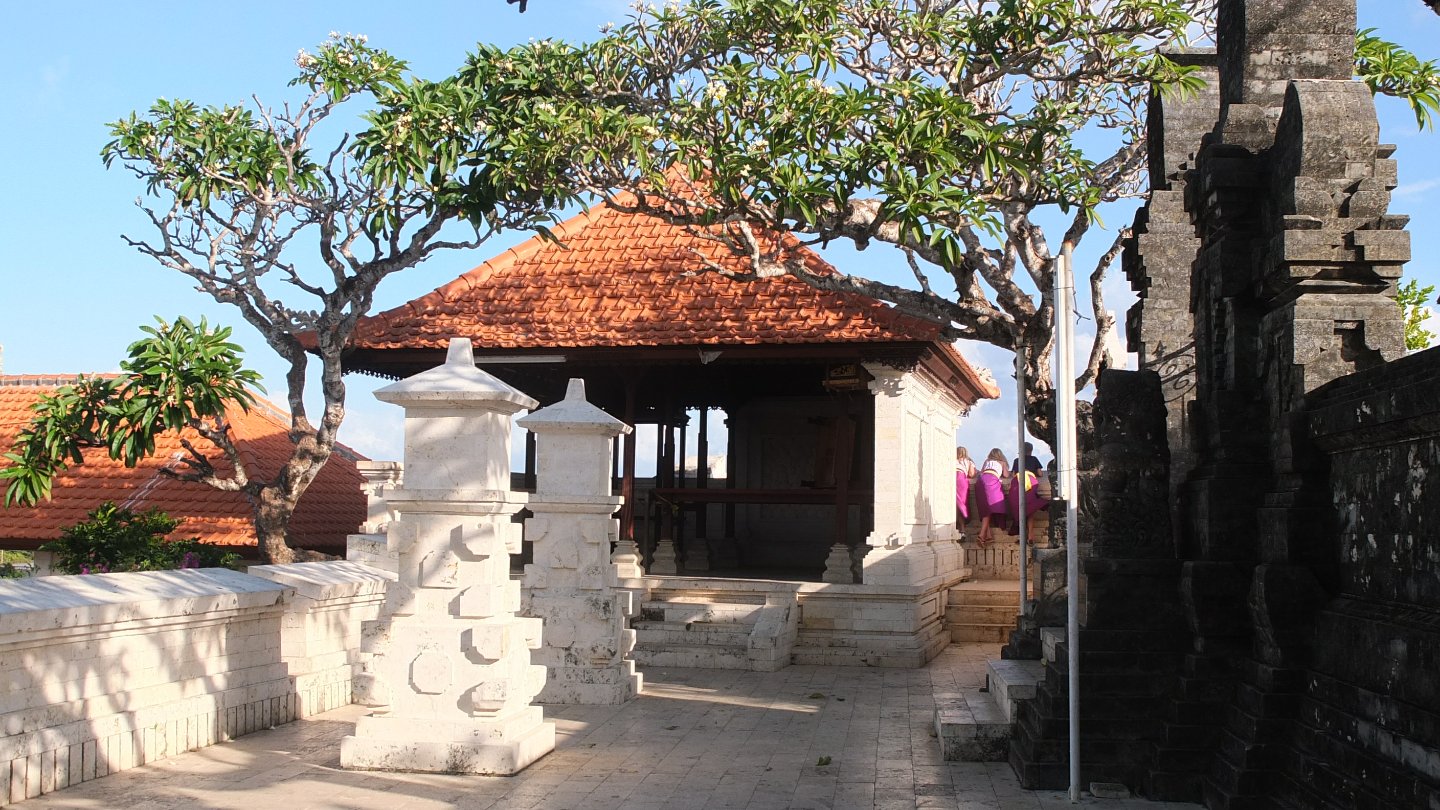 On the right side, the entrance that leads to Uluwatu temple. We are turning left :-) 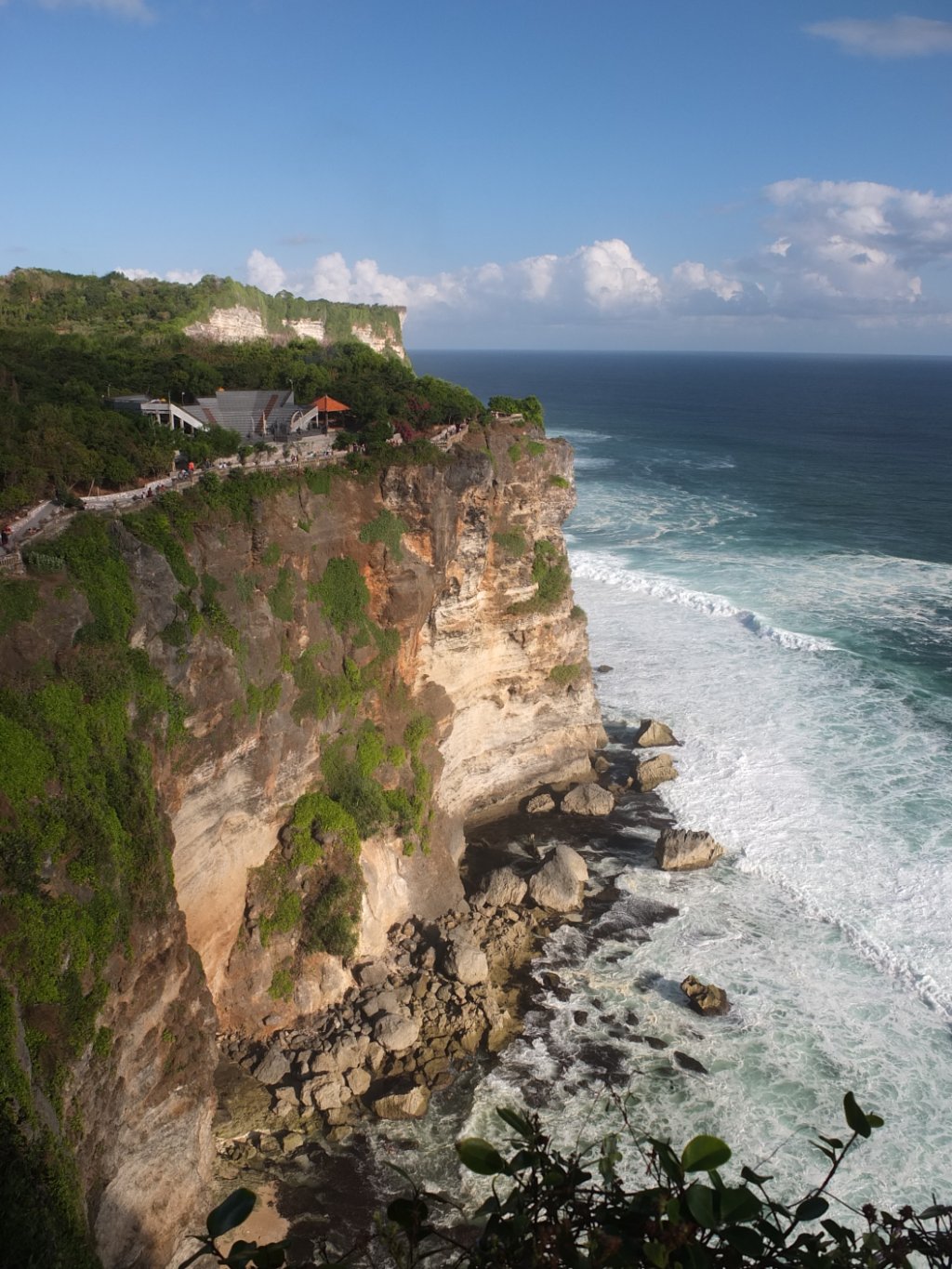 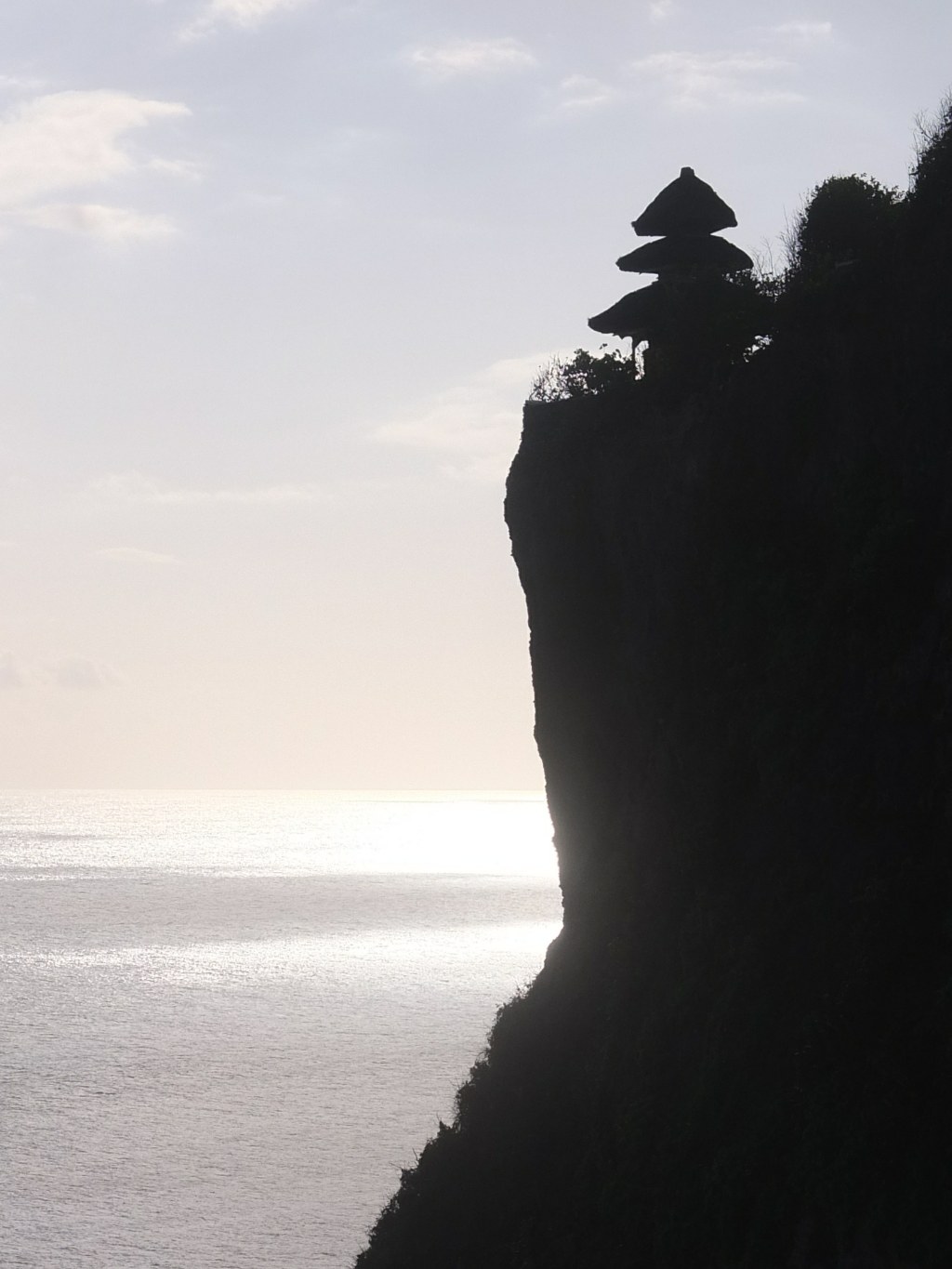 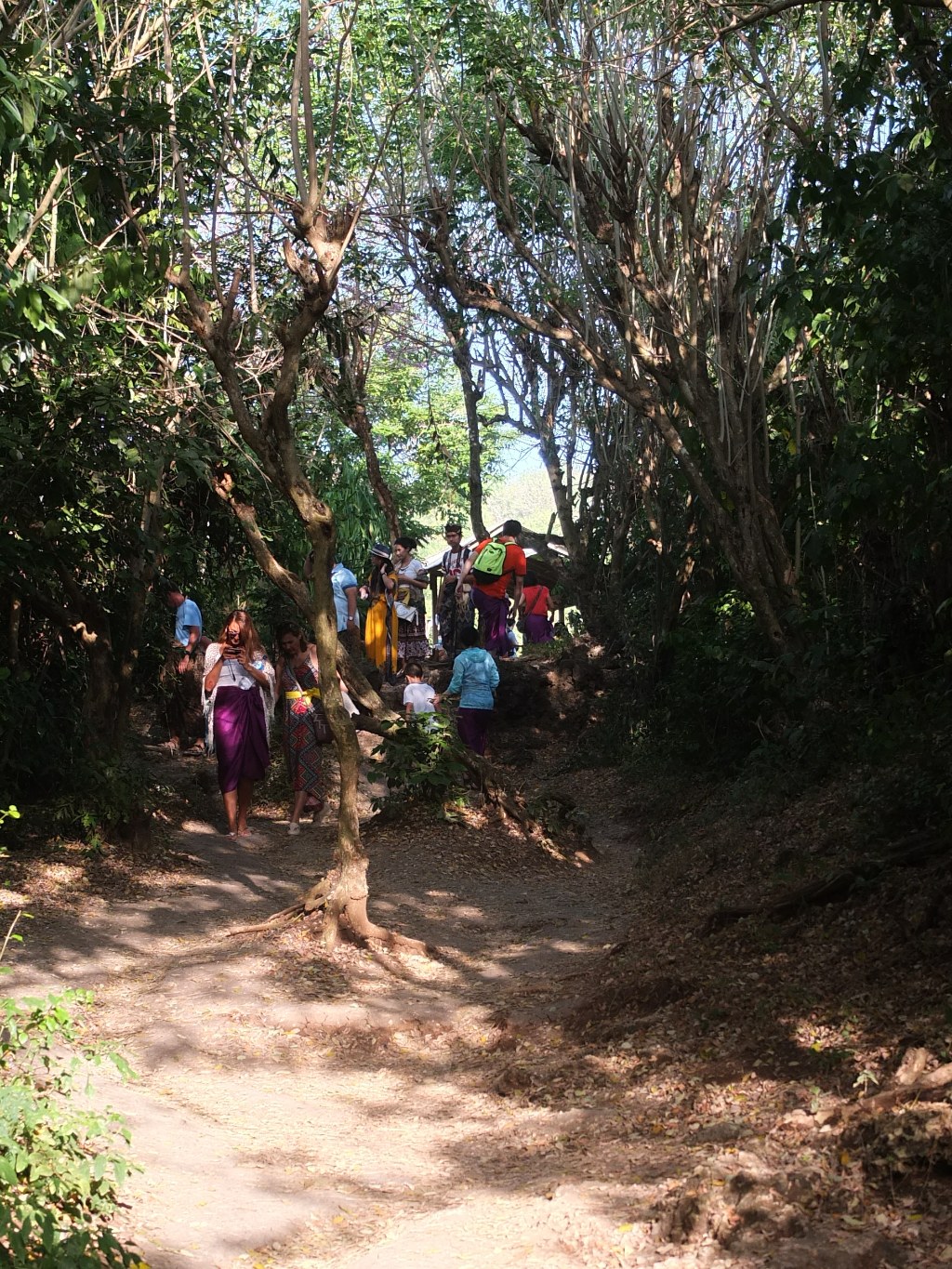 We continue walking along the cliff. 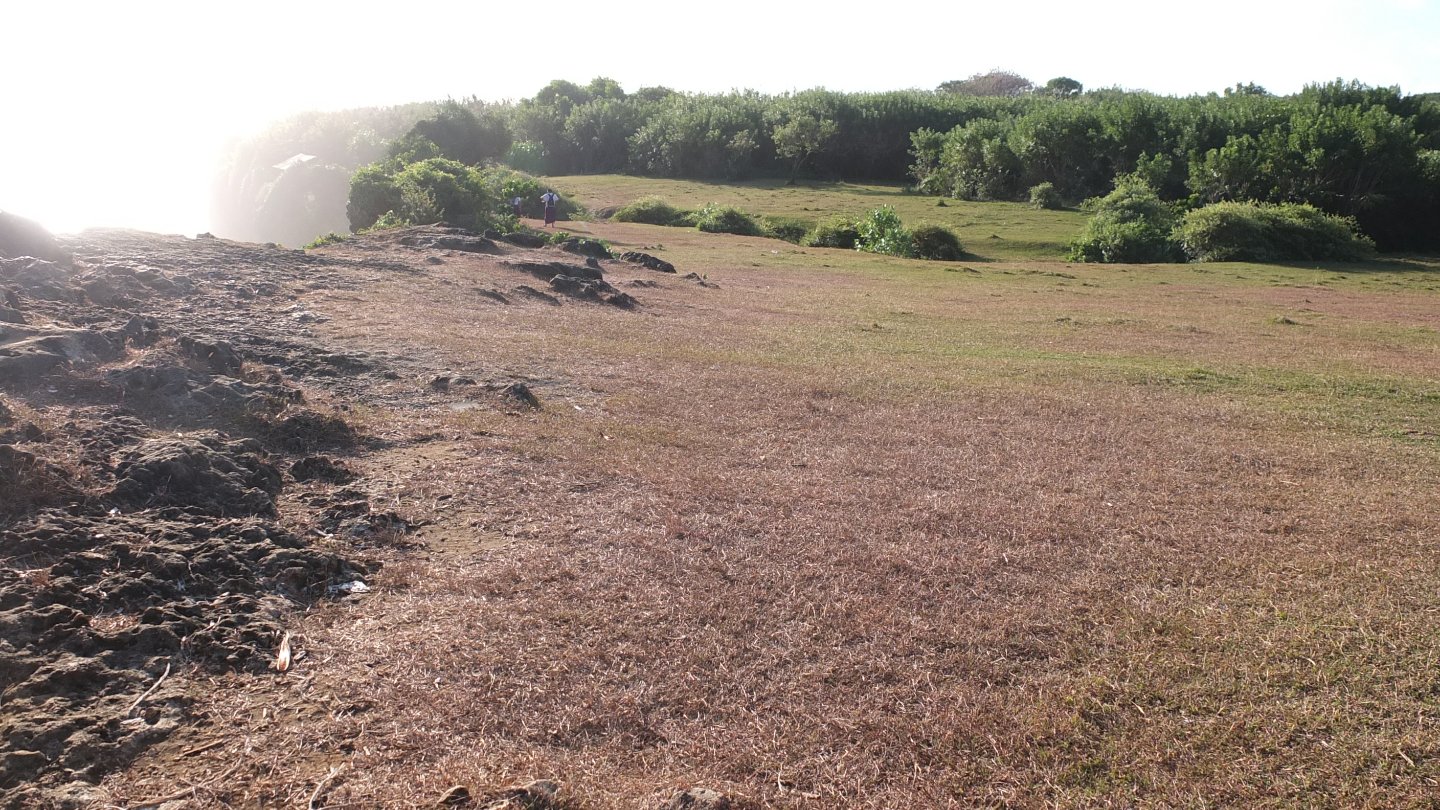 The cliff is right there. There is absolutely not fence or any kind of protection. It just relies on our self consciousness of what’s dangerous or not. Just don’t go too close, that’s it. Much better that to put a bloody yellow fence. 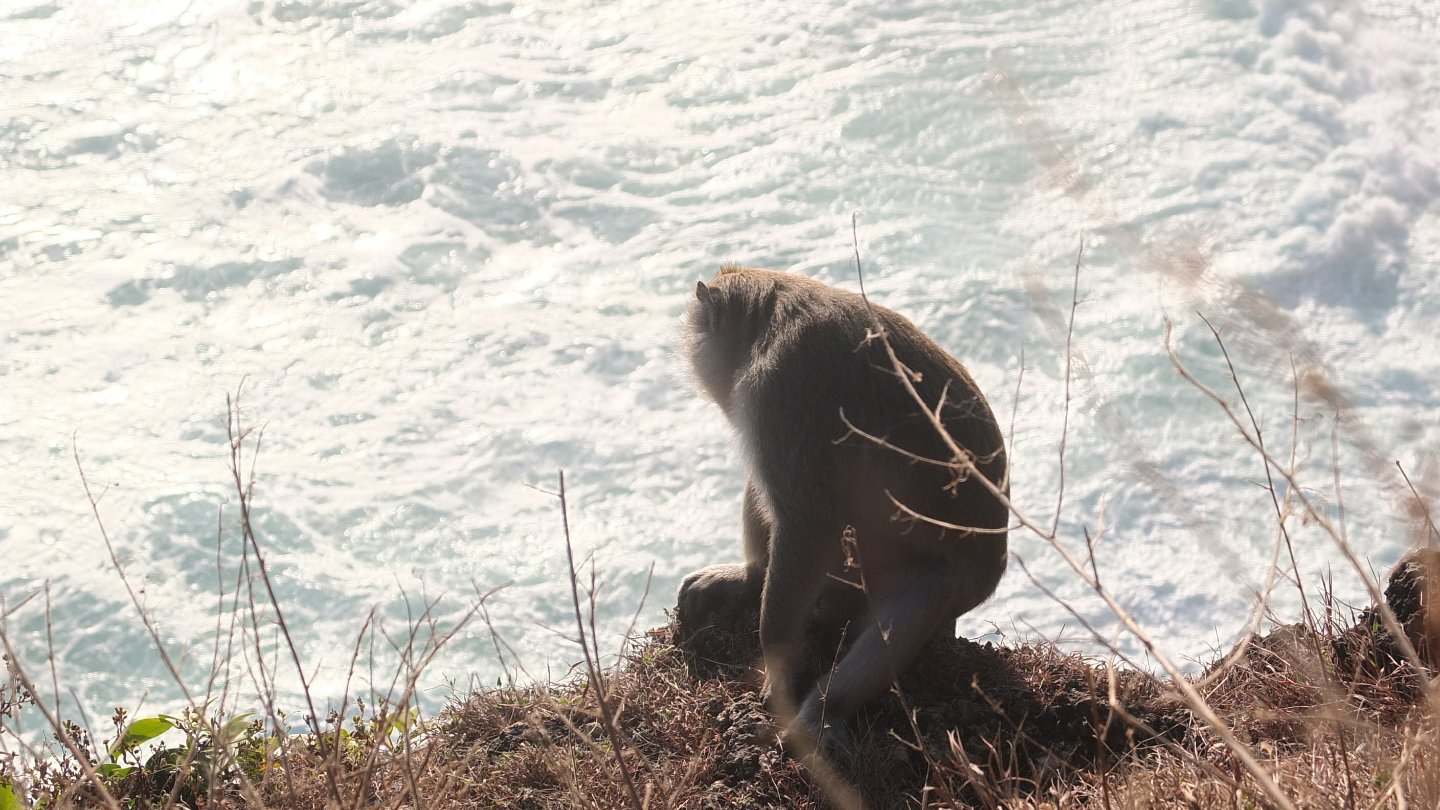 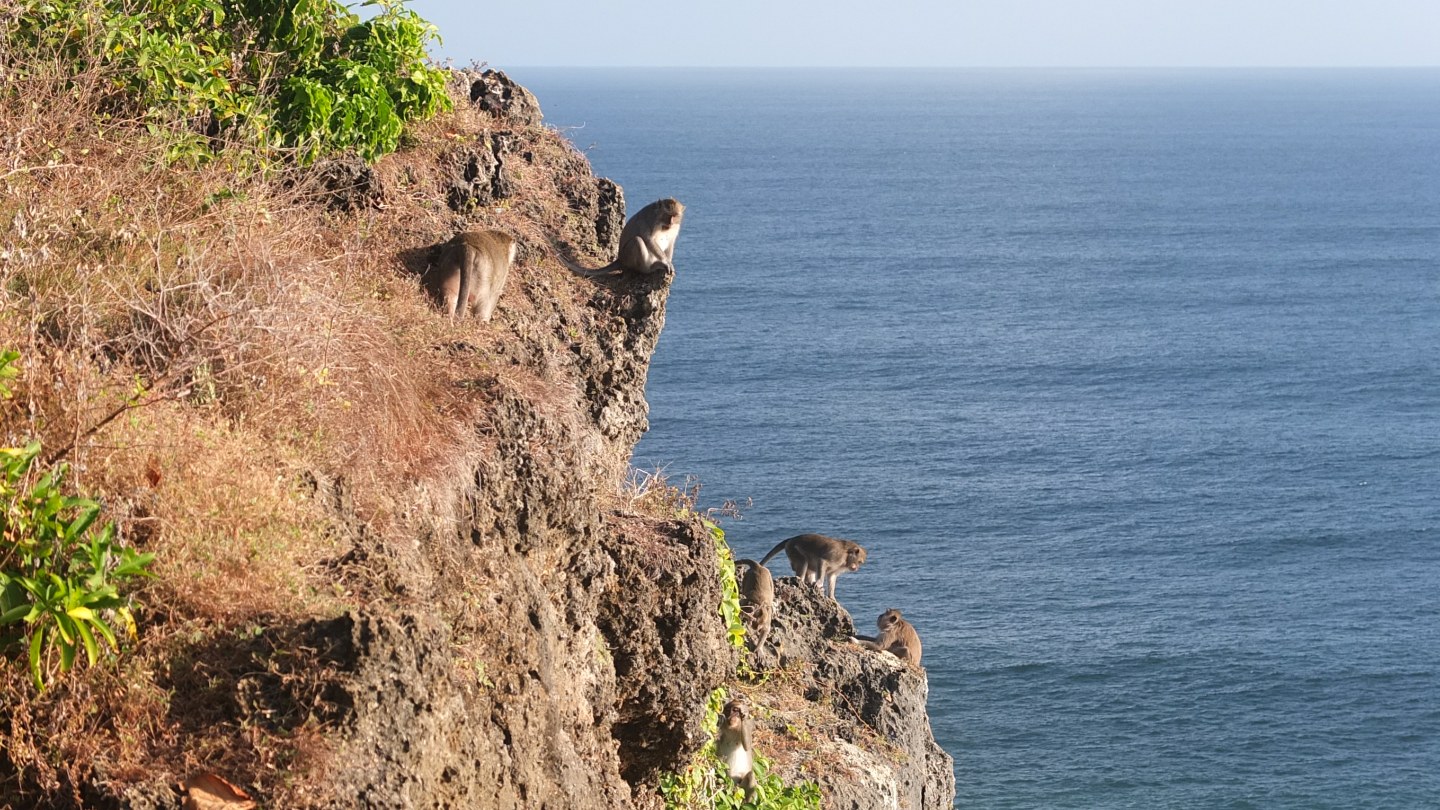 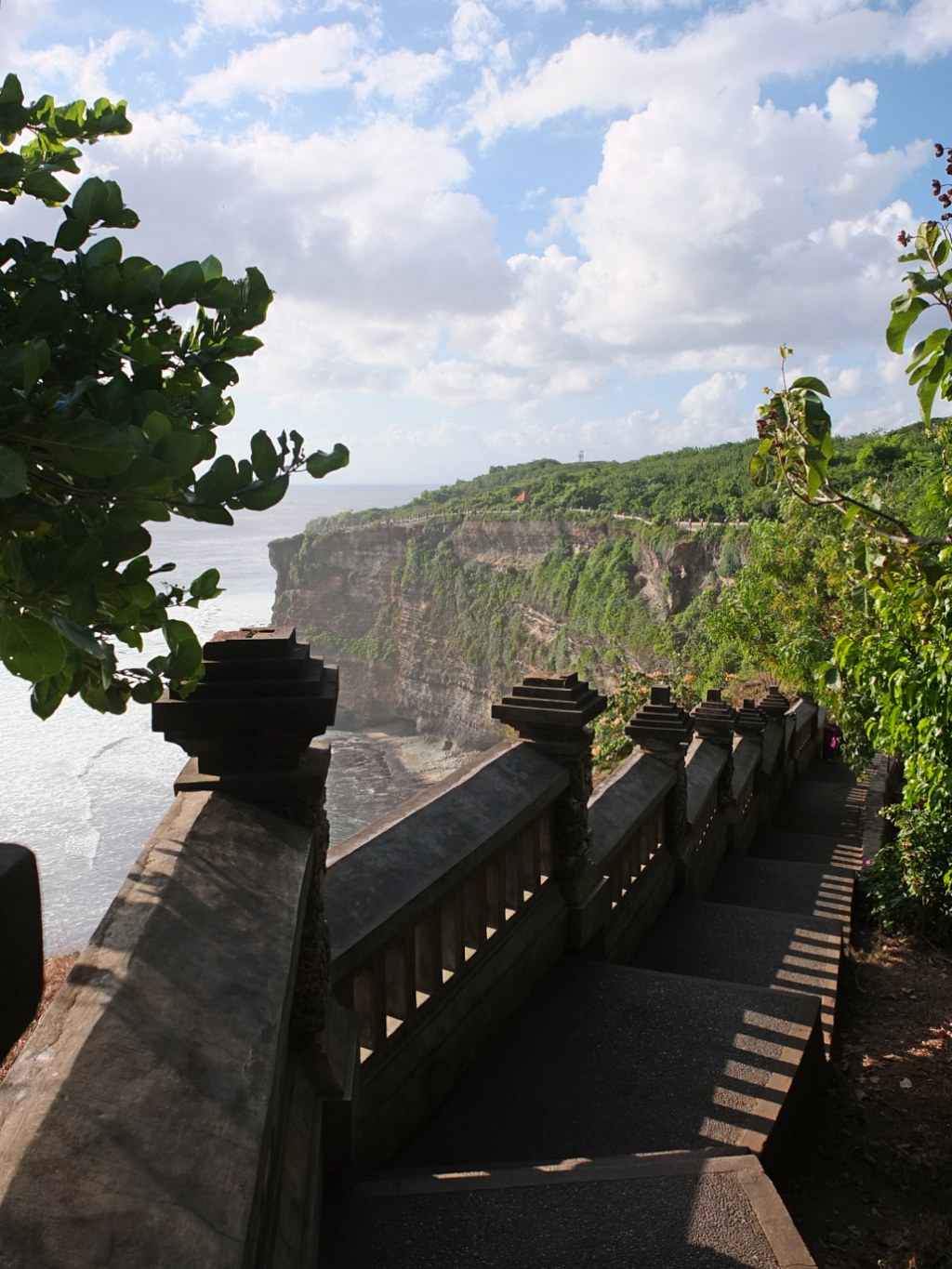 Now we walk on the other side of the temple. There is a point of view on the edge of this cliff. 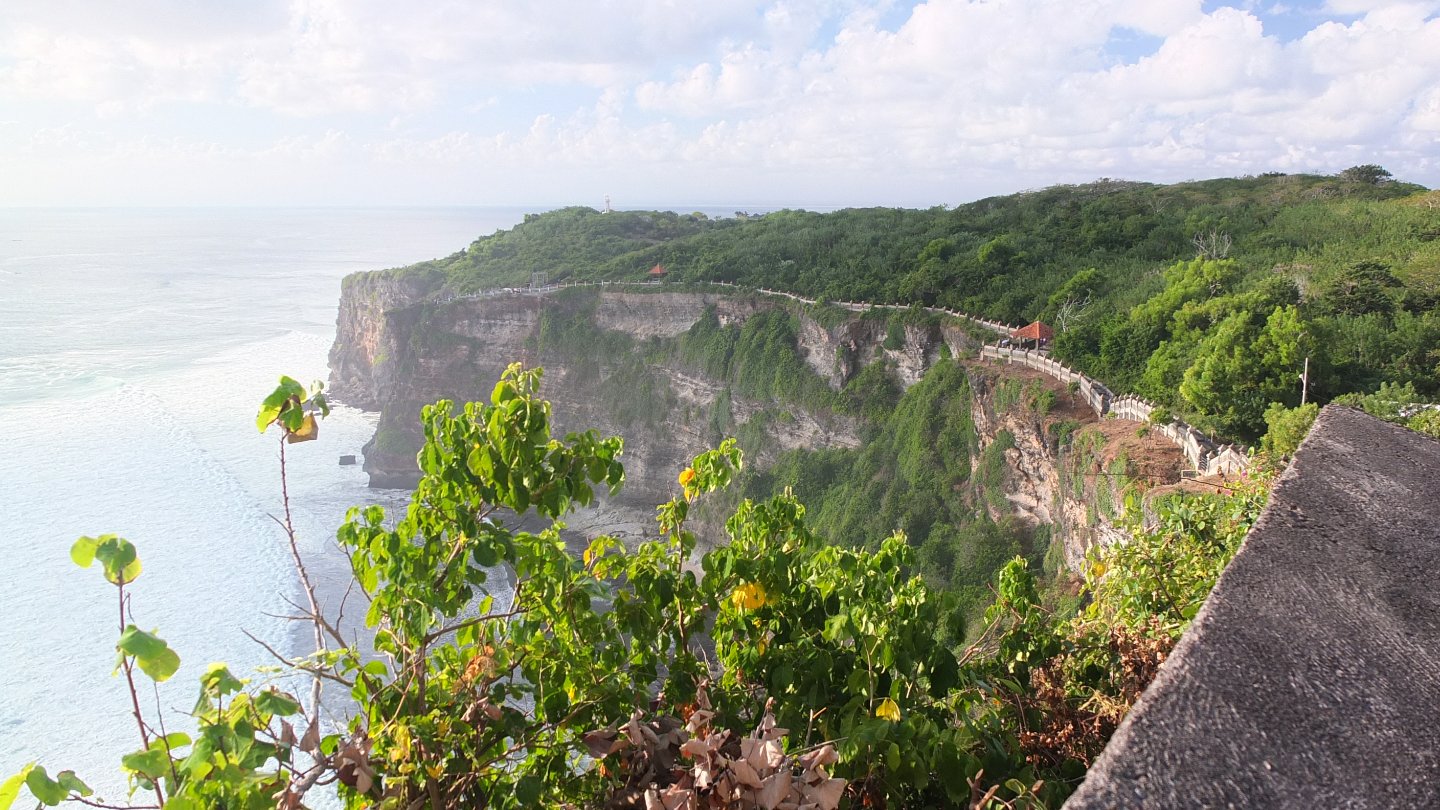 I won’t be surprised if in a 50 years range, this concrete fence fall down in the water. It’s already cracked in many points and the erosion is still doing its job. Just walk on the right side :-) 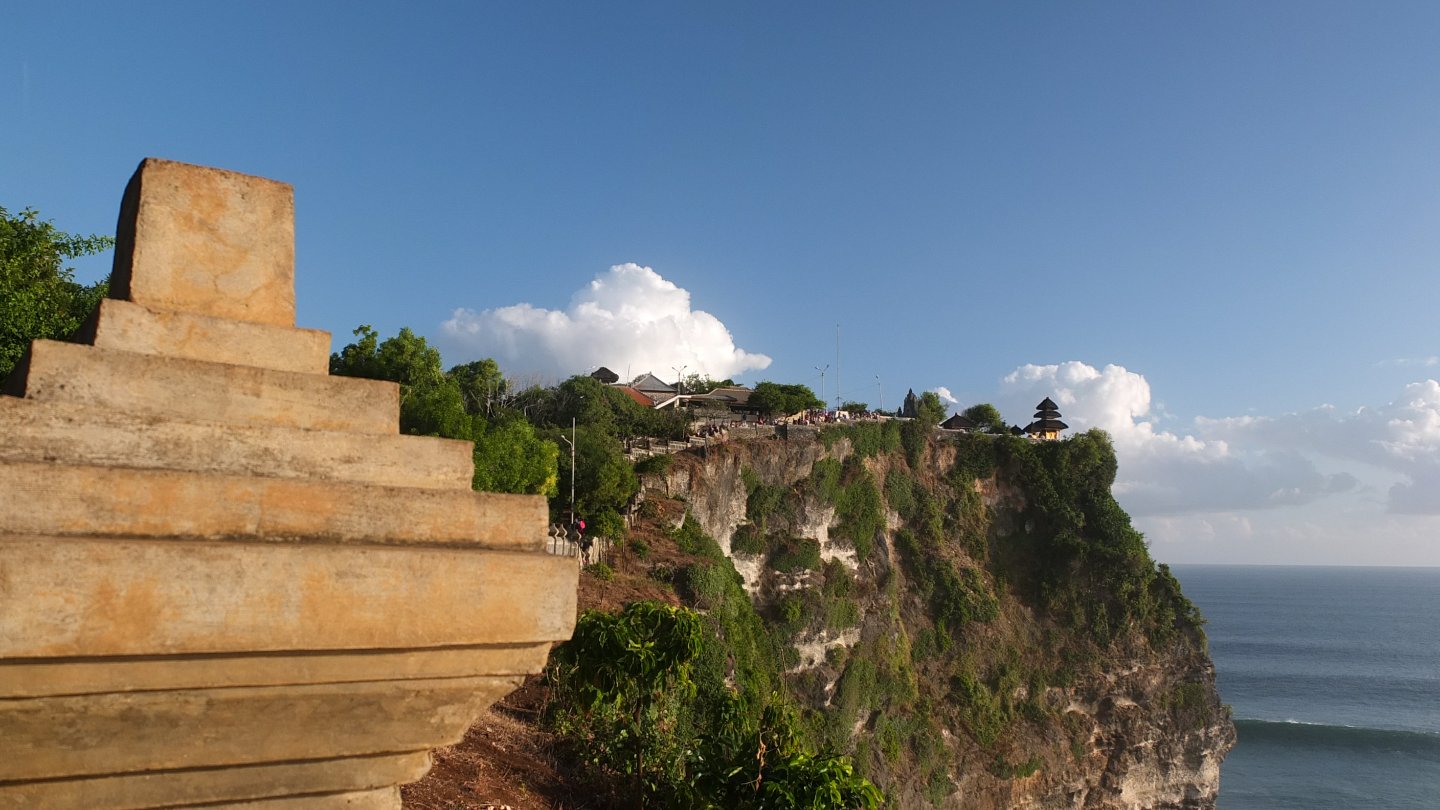 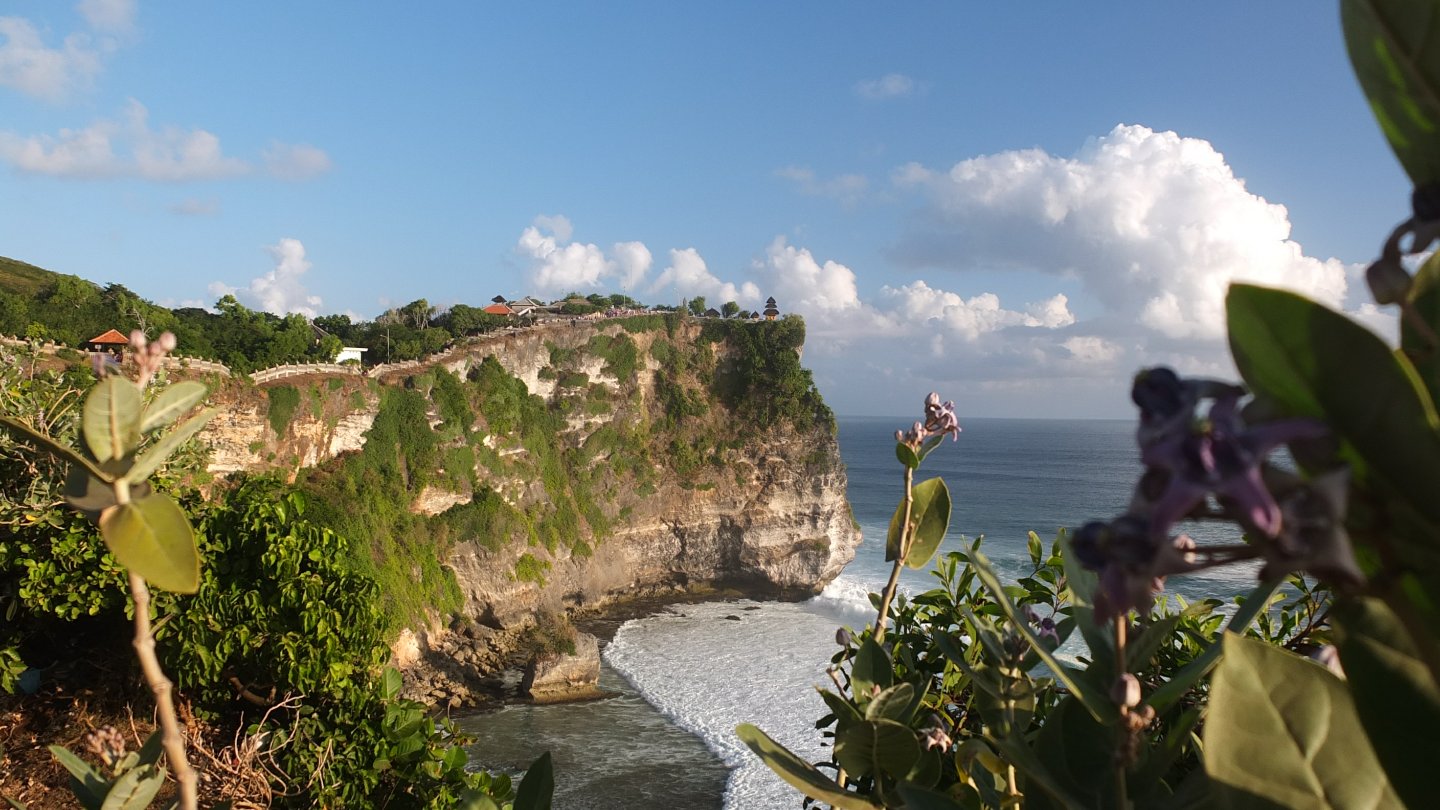 From the point a view. 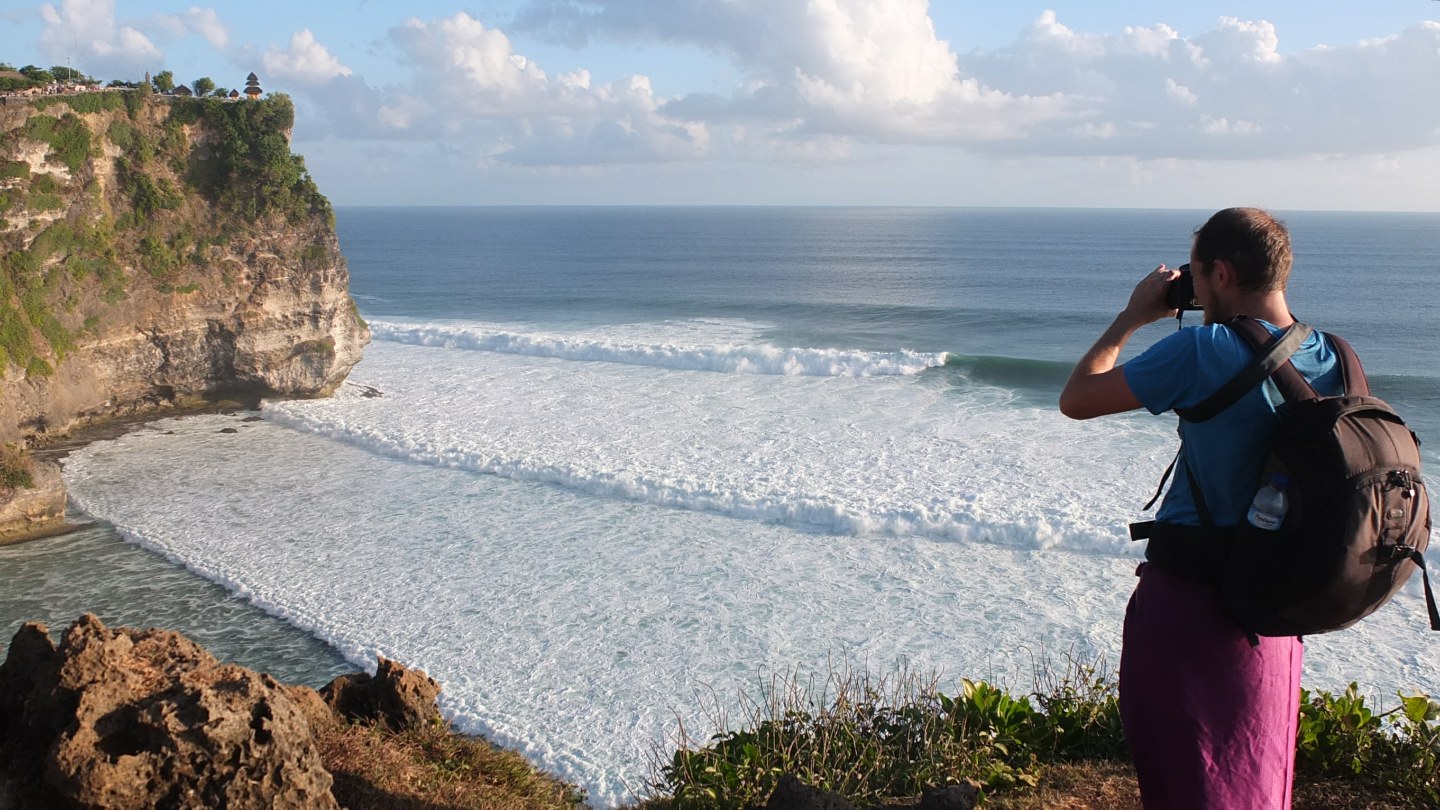 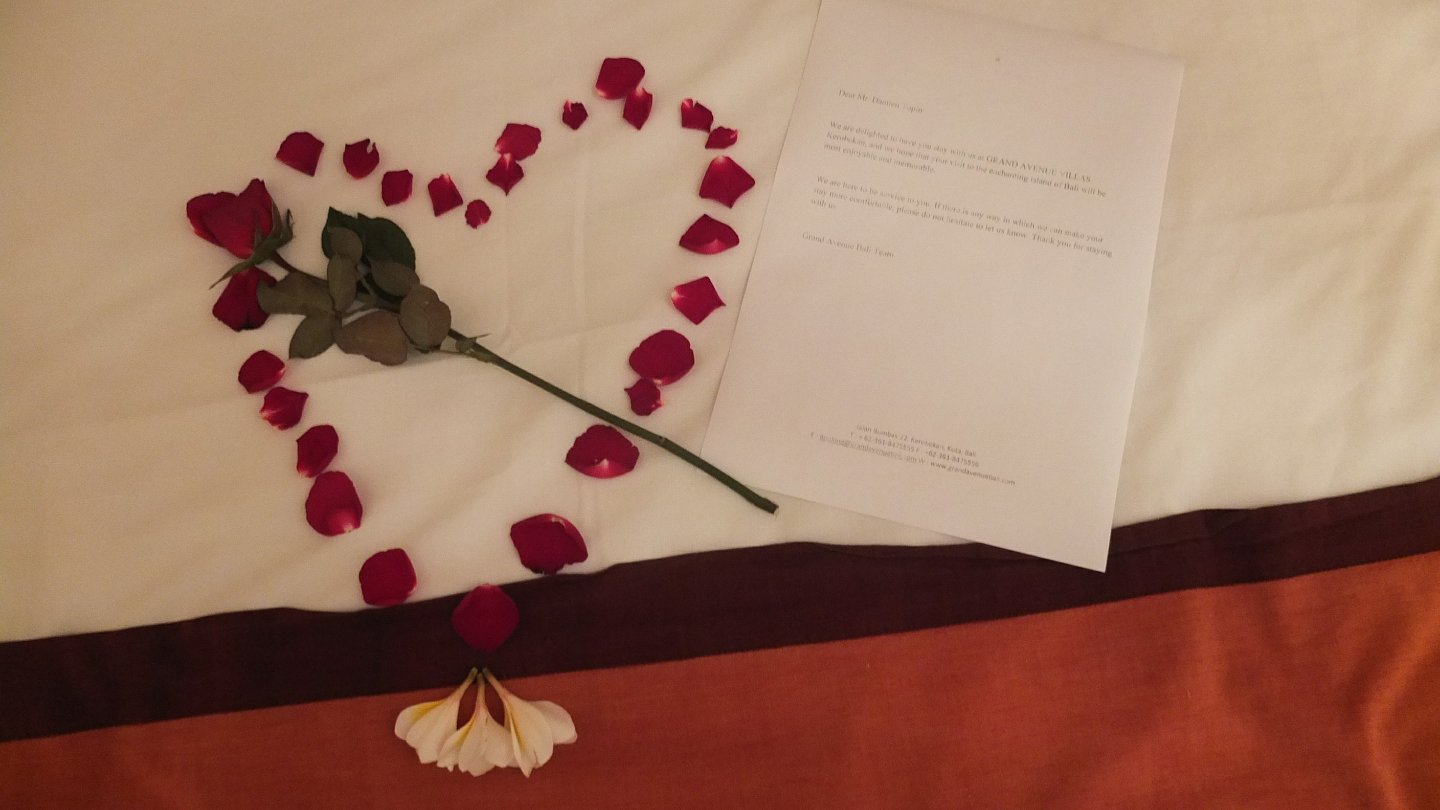 Finally, I’ve let Max at the airport and drove back to the same hotel where we stayed the first few nights. Originally I’ve booked one more night because they would have kept my bike for this 10 days period but finally I left my bike in Cecile’s house. I’ve paid already the room before she submitted the idea. The staff is really kind here. When I came back to the same room where I stayed with Max, they wrote a letter and did that decoration on the bed. Wow :-) Tomorrow I’m gonna met Cecile again and will stay there few days before my adventure starts again. See ya!