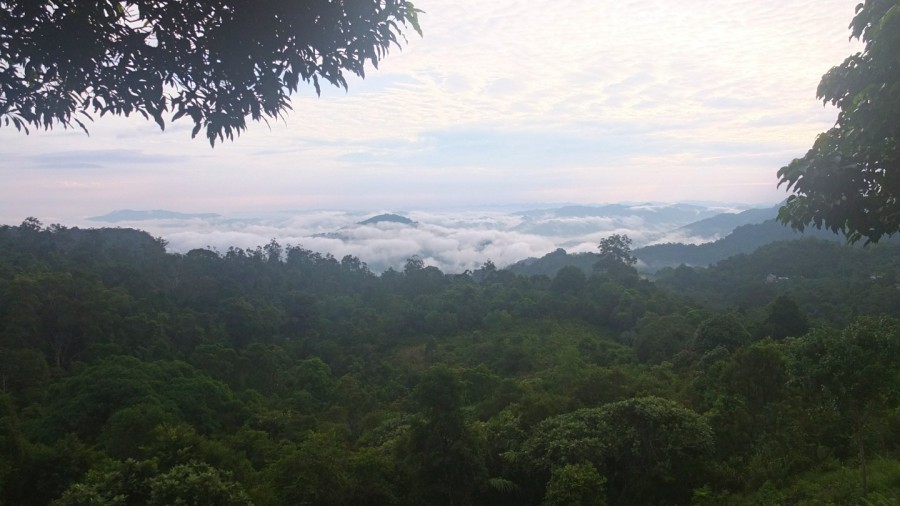 Few minutes after I’ve started this new day, this is what I’ve seen: a nice valley covered with clouds. I’m going to have some downhill for a while, this is very good! For lunch I’ve stopped in a warung and had a nap after that (in that same warung). Then I continued cycling up and downs until I finally arrived at the end of it. This was my last day in the mountains! 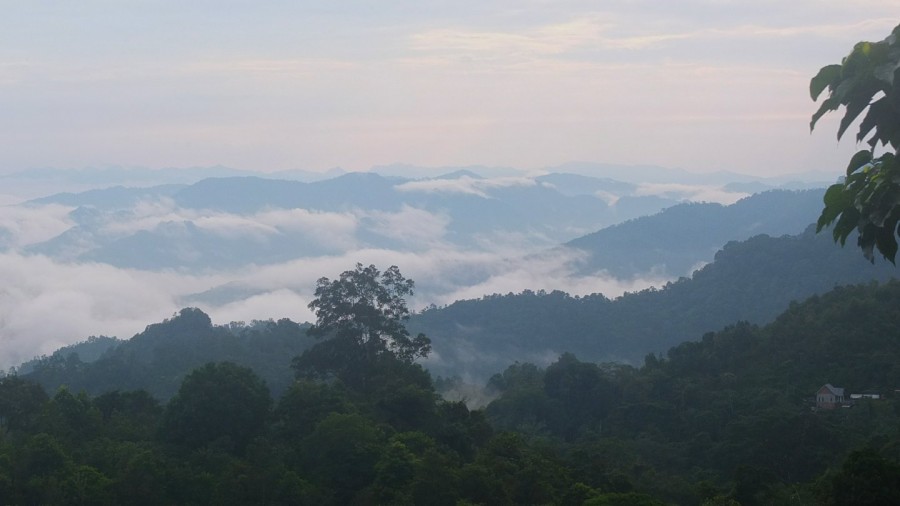 Another closer look at this wonderful morning landscape. 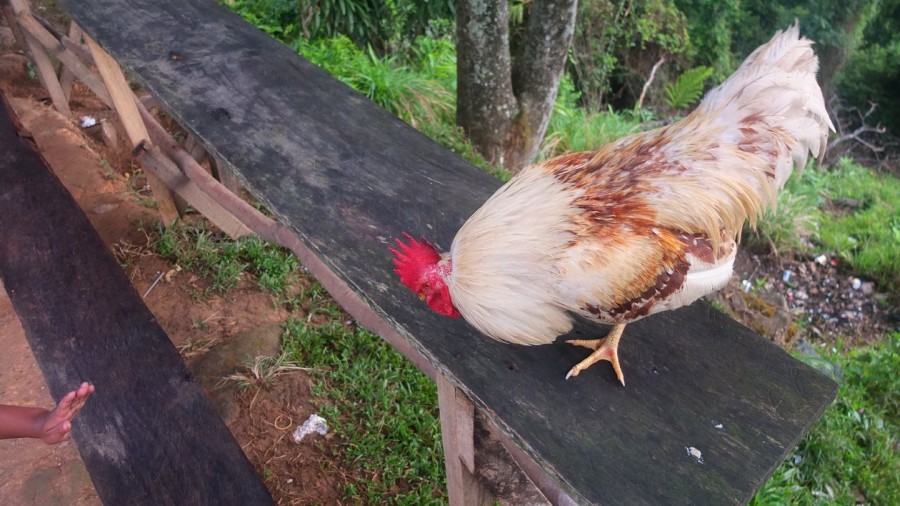 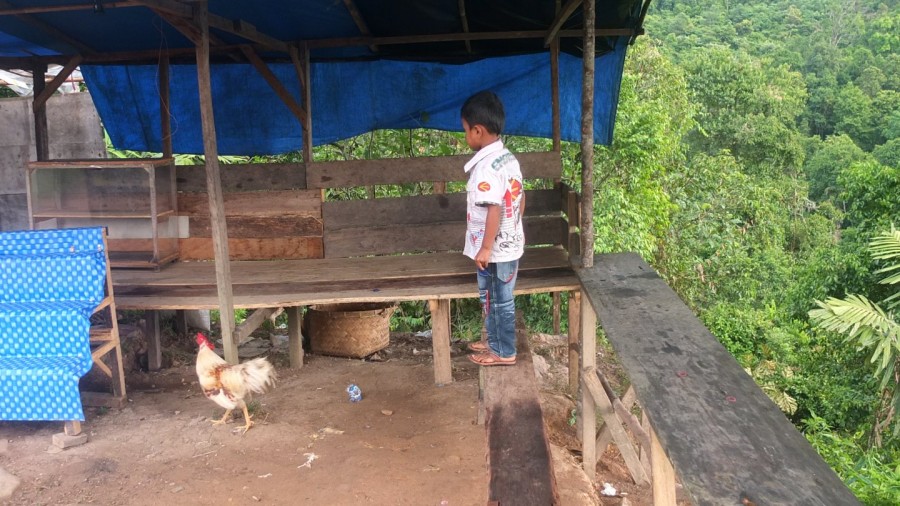 And it is in trouble with that kid who tries to catch him. Before I left the place, an old man came to me and looked at my set up. He shook his head to confirm that my set up was good then look at my hat onto the top of my trailer. He look at me and his body language told me: “your hat, you give it to me?”. Why? Why everyone wants this hat. It has been offered to me so I keep it. And a hat is useful anyway. 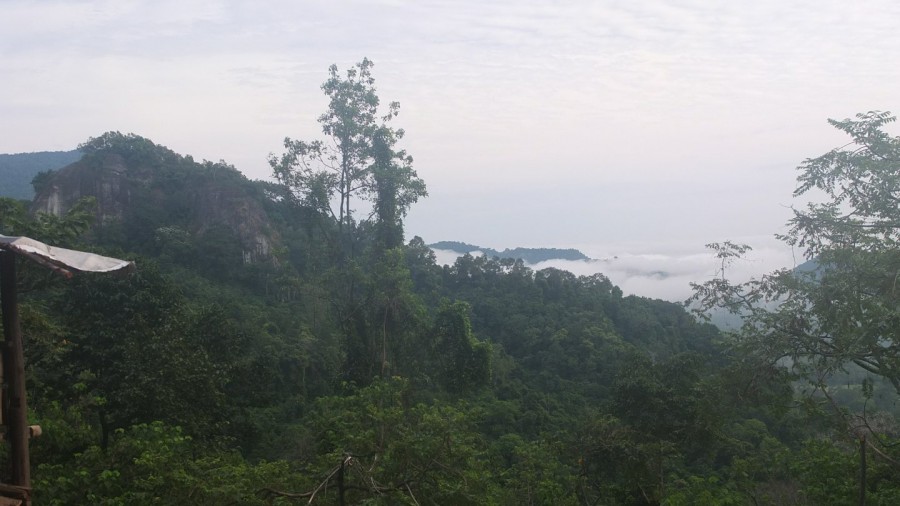 I continue the descent in the valley. 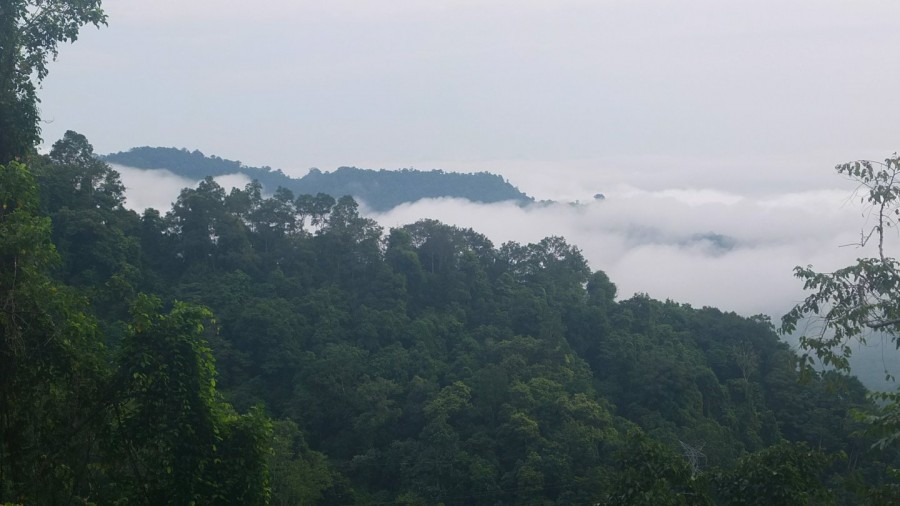 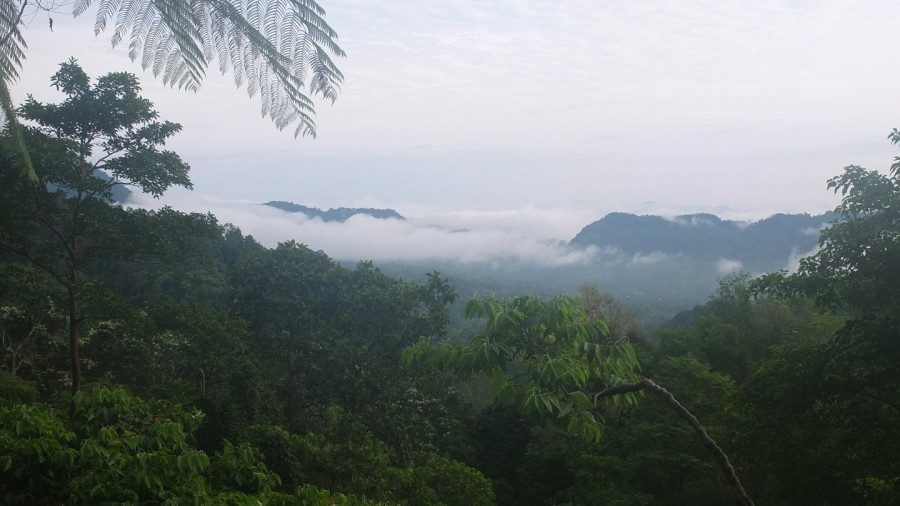 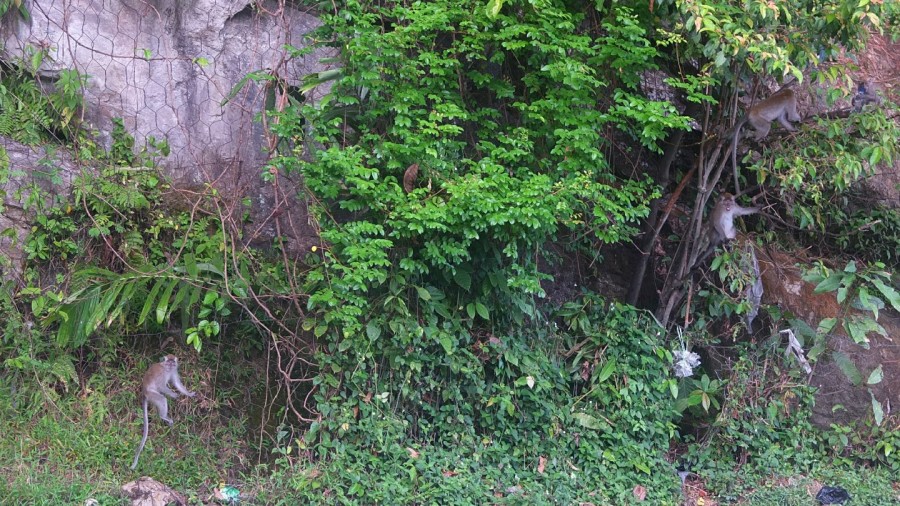 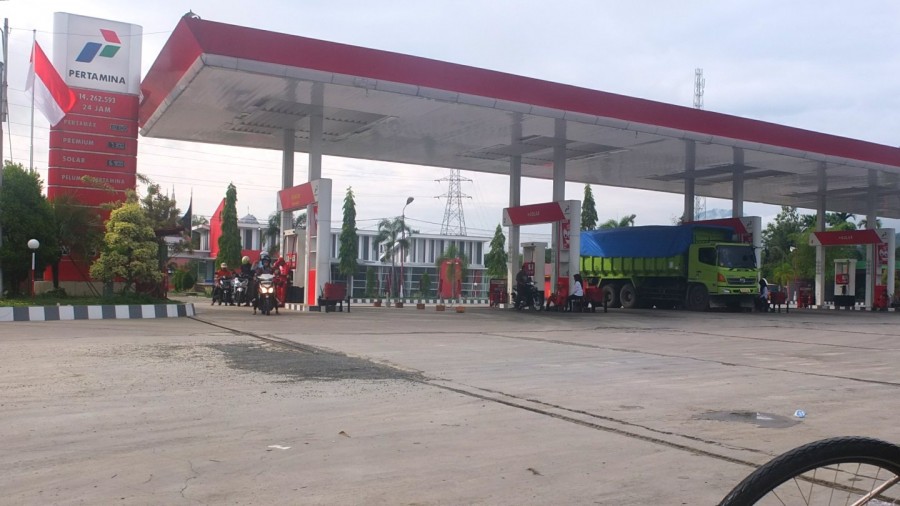 A short break to a pertamina gas station :-) 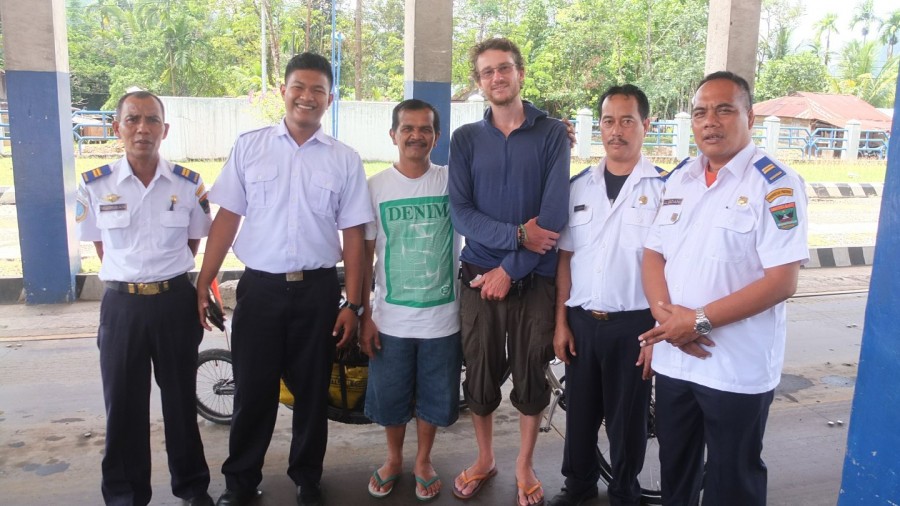 An hour later I stopped in a warung next to a place run by these guys. When they saw me having a drink they came over, light up their bloody cigarettes around me, and we had a chat. Their place is made for truck who pass through this area. They weight them and… I don’t know why because I did not ask. The youngest spoke a bit of english so it helped to understand each other. 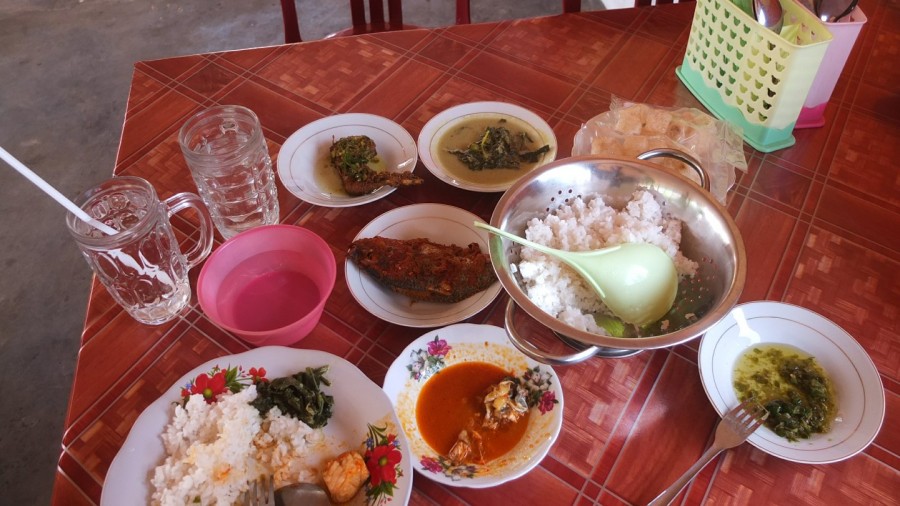 I’ve been cycling for another 30 minutes and this time stopped in a Warung. This is so hot now. Between 35 and 38 degrees if I remember! I did not really choose the meal today and I think they gave me as much as they could because it has been the most expensive meal I’ve purchase until now: 32.000 (3.2$). Still very cheap of course but normally I eat for 18.000 to 22.000. 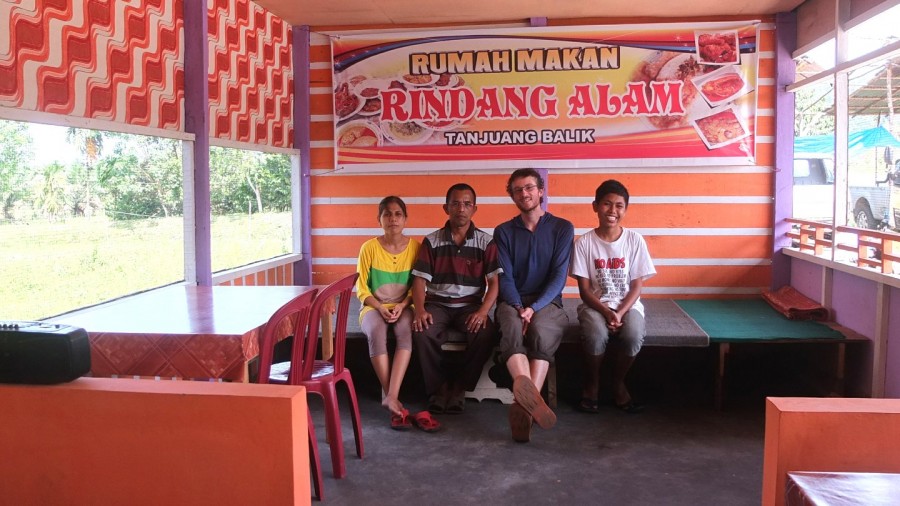 We took a picture with the family and then I had a 1h30 nap onto this bed. The mother came back from her home with a pillow just for me. Thank you very much :-) When I left the place the Father gave me one of his ring. Indonesian people loves big, shiny, golden ring. It might represent their wealth or something. I’m not sure. I really love bracelet but “bling bling rings” is not really for me. I accepted his gift and will keep in my bag later. Sorry I cannot wear something like this. It looks silly on me. 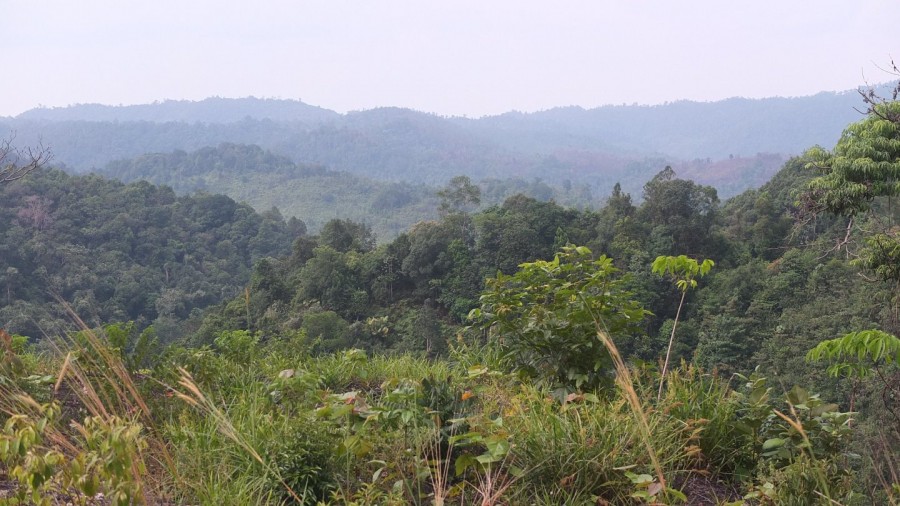 I’m cycling in the mountains with vegetations and trees all around. There is nothing else. 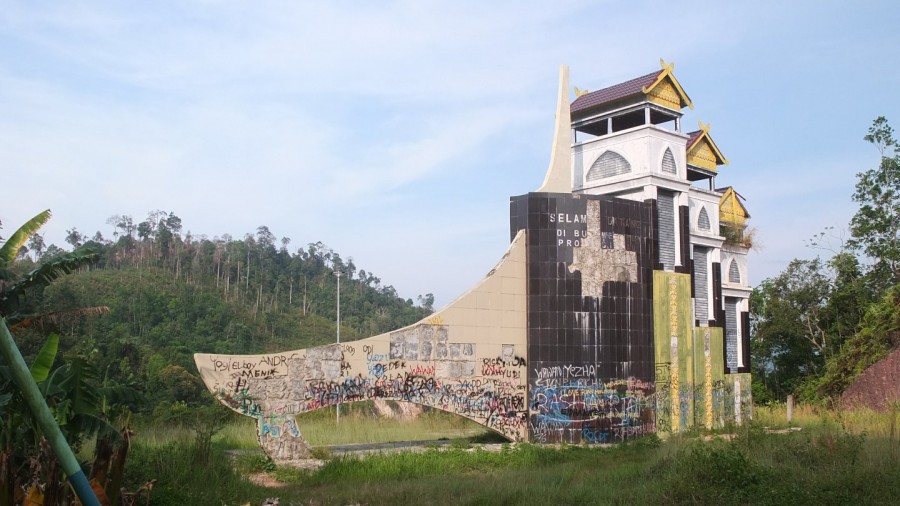 I’m going to leave the West Sumatra region and enter in the Riau one. 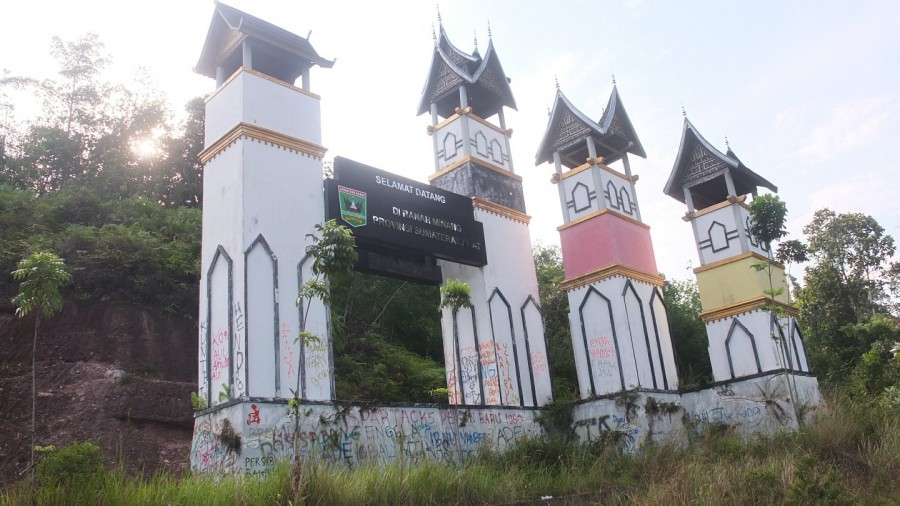 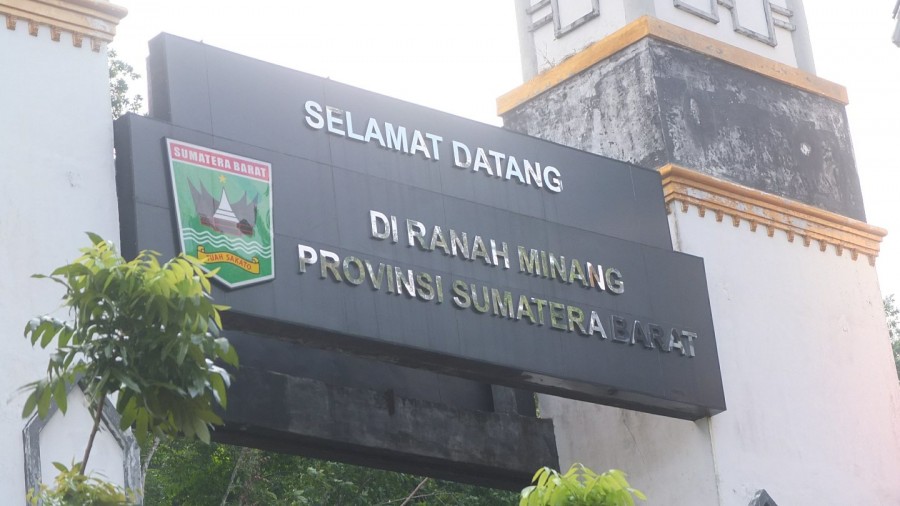 This is where I used to be. 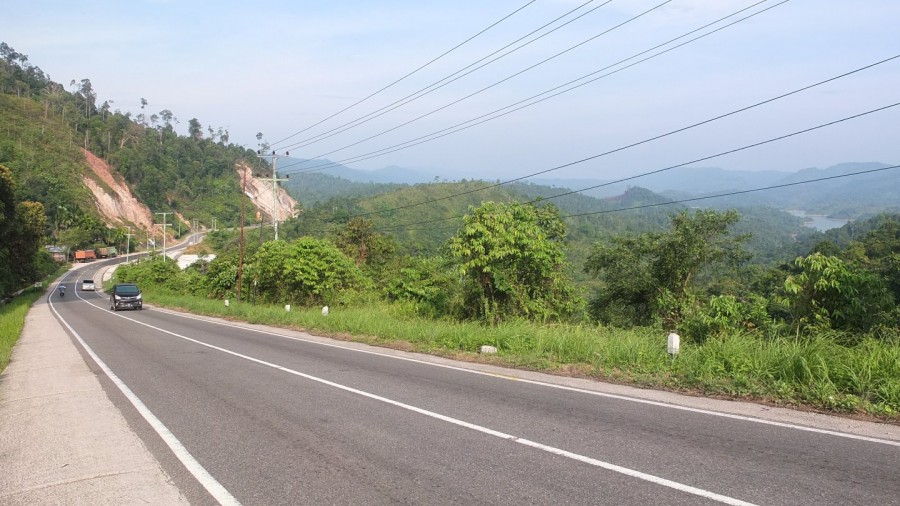 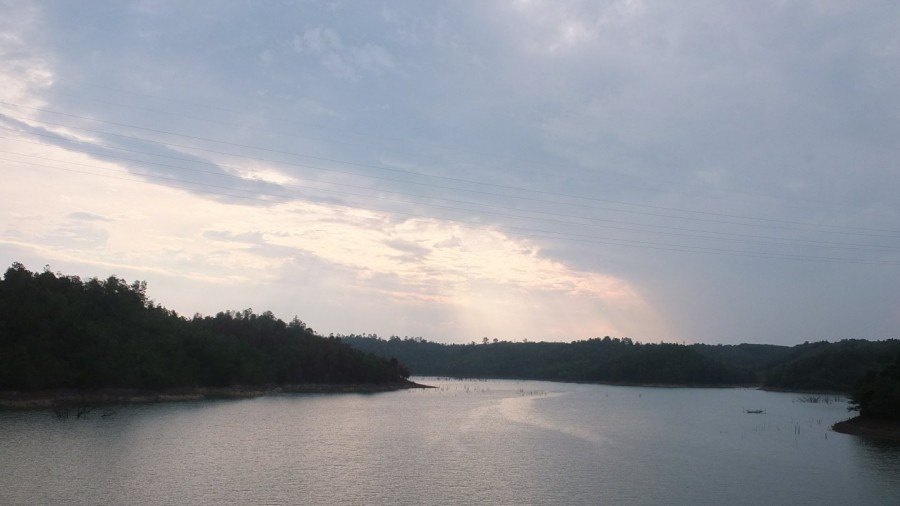 I’ve reached a wide river. Soon, I will have to find a place where to stay. 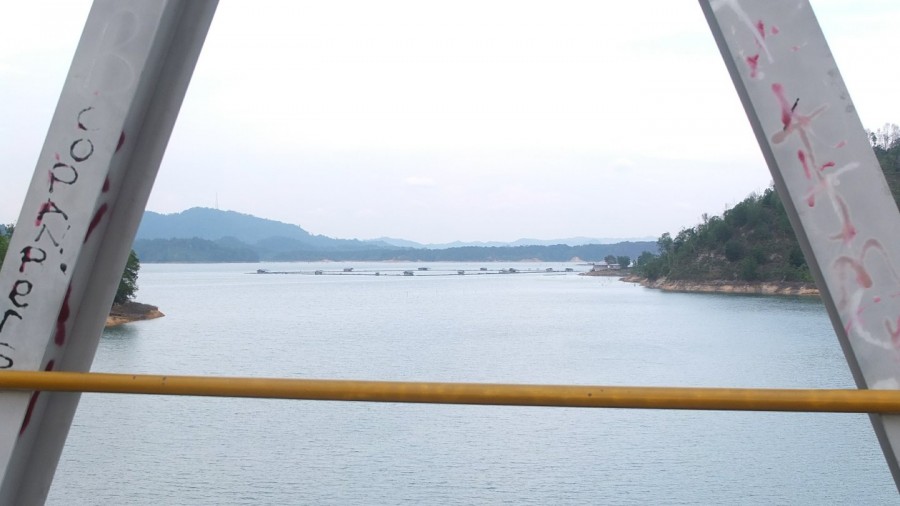 Every single time where there is water, there is fish farms. 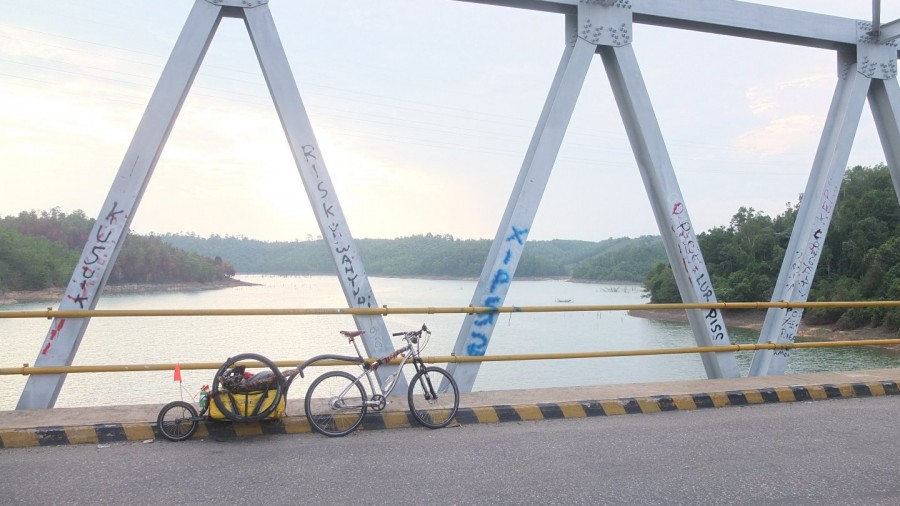 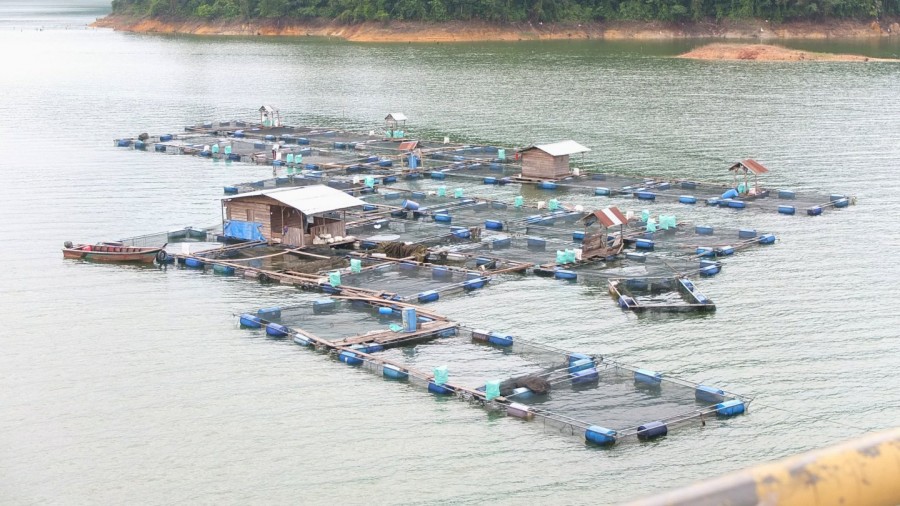 This is later on when I’ve crossed another river. See? fish farm everywhere. And the people shit in the water… Why did I think about this? I should stop eating fish now…

When I got to West Bangkinang there was a lot of warung along the road. I stopped in one of them and had my dinner. I ate my favourite one, Mie Goreng :-) The family of the warung let me take a shower at their place when I just asked for toilets. That was good to be fresh. Then I started look for a place where to sleep. I cycled maybe a minute or two and found just before another warung a tiny path going deep in the forest towards the river. I thought the spot was great but I did not want to bother anyone so I’ve asked to the place next door if there was no problem. One of the woman said “no problem”. She looked at me at the same time and saw my bracelets. “Can you give me one of your bracelet?” Why? No! Today everyone want my stuff!

Bracelets are the only things I buy as souvenirs.

Yesterday at the Warung place where I met the nice family, I particularly spoke with a little girl, maybe 14 years old. She asked many questions and I could easily see she was interested of what I was doing. So, I’ve decided to give her one of my bracelet. I had one pink and one green. I broke them up and create two new bracelets: one green with one pink pearl and another one pink with a one green pearl. I let her choose one of them and kept the second one. She chose the green one. That way we will remember this day :-) She was very happy with this and me too. I don’t like people who ask me to give them something with any particular reason, just because they think I have money and can buy some more later.

Well, let’s come back to the actual story. The woman said that there was no problem for me to sleep next to their home. This is not their garden. This is just a public path in the bush who lead to some other homes I guess. So, I started fixing my hammock and during that time, the members of the warung, were watching what I was doing. Until now, everything was okay. I thought I’ve found a good spot for the night until I tried to sleep. Around 11pm, they turned on the music loudly, then shouted in my direction: “hey mister”. Can you see that I try to sleep? So why are you calling me? They were not very respectful… They just wanted to take advantage of the rich white man who slept next door. I did not answer and they finally stopped annoying me. But the music last for a while and I had trouble to fall asleep… I hope my next night will be better :-)