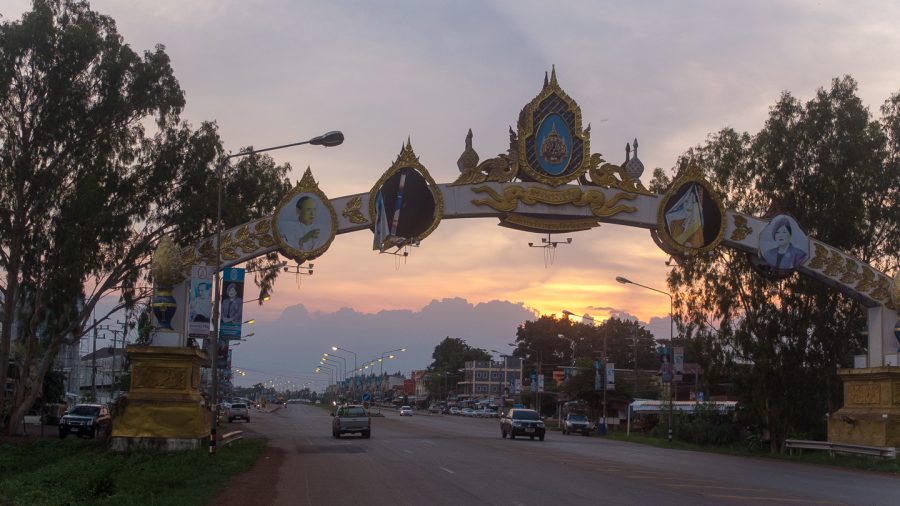 After nearly 2 months spent in Laos (my idea was to stay there only one month at the beginning) I’m back in Thailand for 28 days max, the length of the free VOA (Visa On Arrival). Most of the day, the road was flat and easy but I know some hills are coming soon. That’s a pretty easy day. I feel I came back to civilisation today. Laos was good, and Thailand is different. 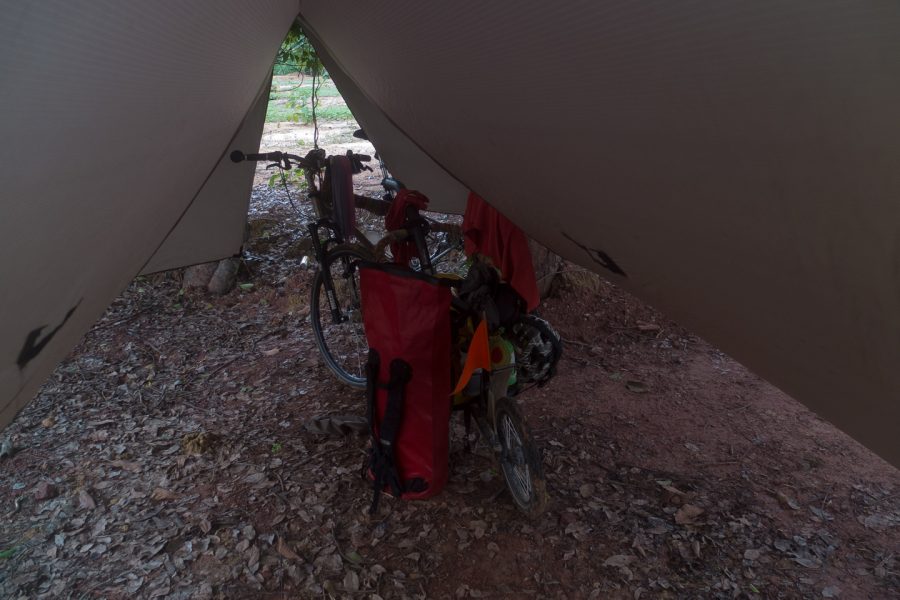 Back to this morning…
I’ve packed the hammock already and very soon I will be ready to go. 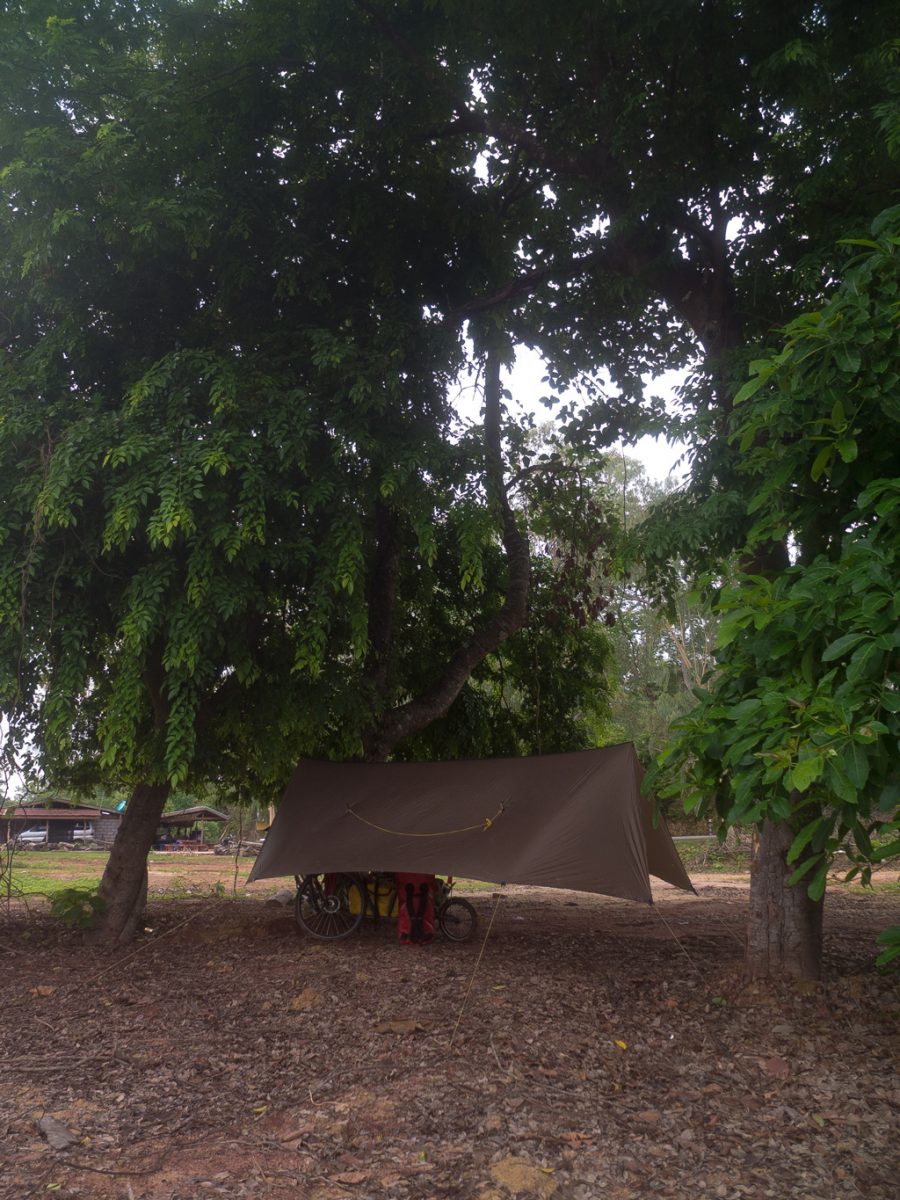 Yesterday night, I’ve been to a restaurant just on the other side of the road. The owner and her kids were very nice and certainly happy to host a stranger. I had my daily noodles soup for dinner. After this, I told them I was going to sleep between the two trees on the opposite side of the road. They had just the perfect distance between them to setting up my camp for the night was a piece of cake :-) 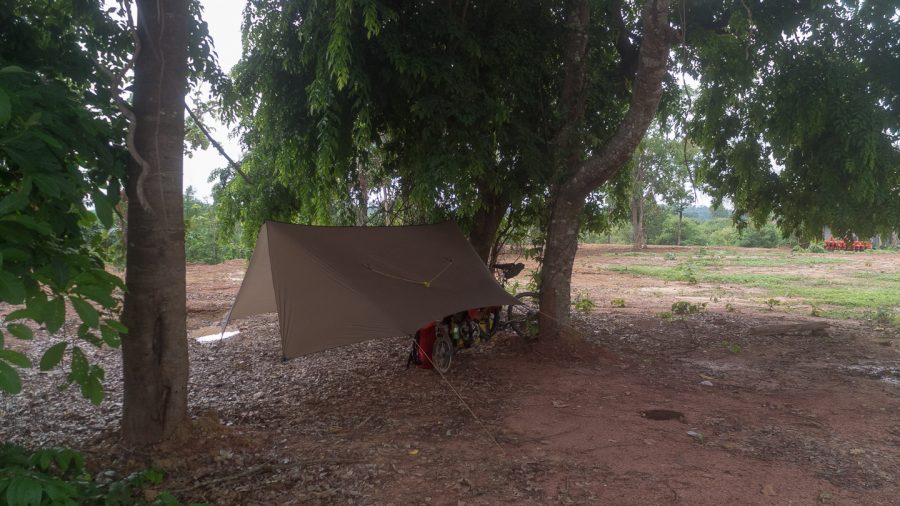 View from the other side. I’m going to have breakfast (noodle soup) at the same place as yesterday and then I will cycle backwards towards the Laos/Thai friendly bridge number 3. 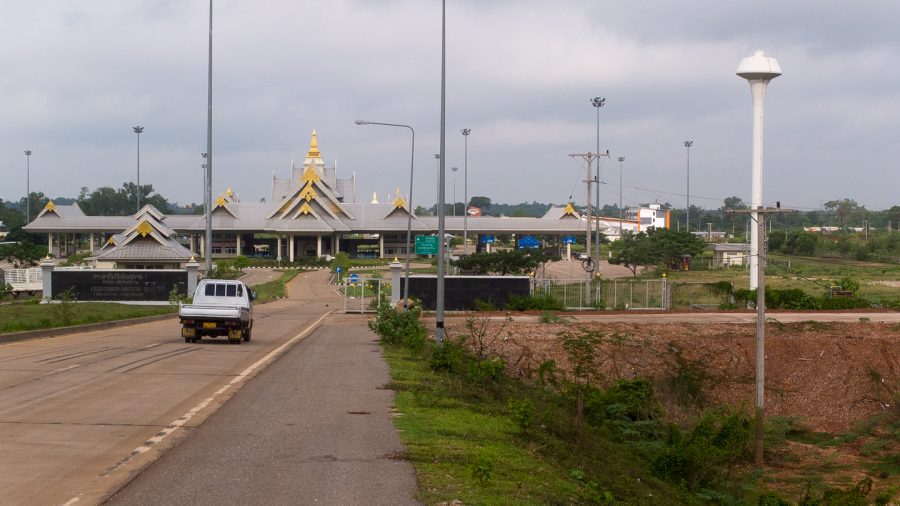 I’m back! but a bit late… It’s just 7:55am now. I’m pretty sure there is more than one bus per day. If I miss it, no worries, I have plenty of data left I can use before I cross the border. 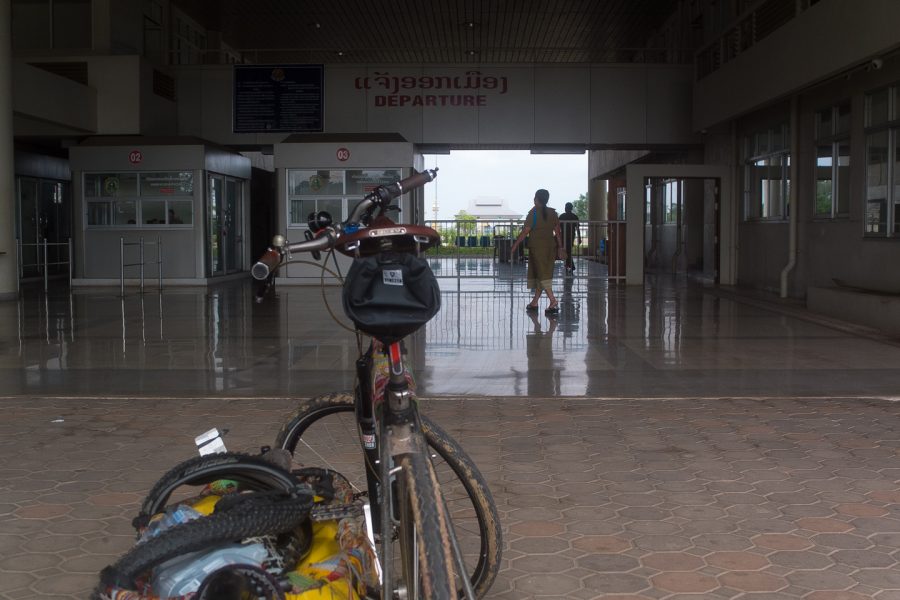 Ready to get on the other side :-) Actually I should have disassembled my bike later because now I have to separated piece to carry. That was silly… 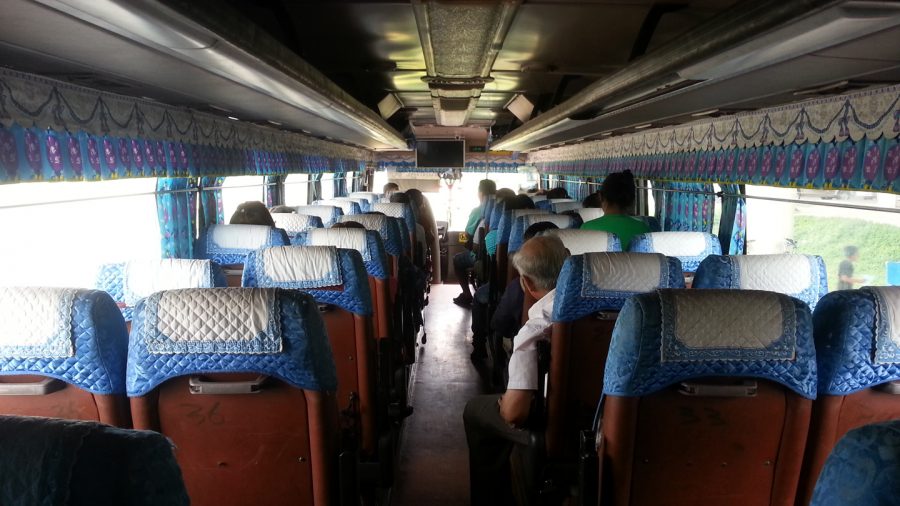 This time I didn’t pay for the bicycle! I’ve done three border crossing between Laos and Thailand and all of them have different rules. At the northern border, I had to catch a bus and pay 5 times more for the bike than my own ticket. At the central border next to Vientiane, no one stopped me when I started cycling on the bridge. I’ve seen the signs but nobody really bothered. Here, I must catch a bus but I’ve just payed my own ticket (70baht, 1.75€, $2.60AUD). I did not payed in Laos Kip because I already changed all my money at the local desk. 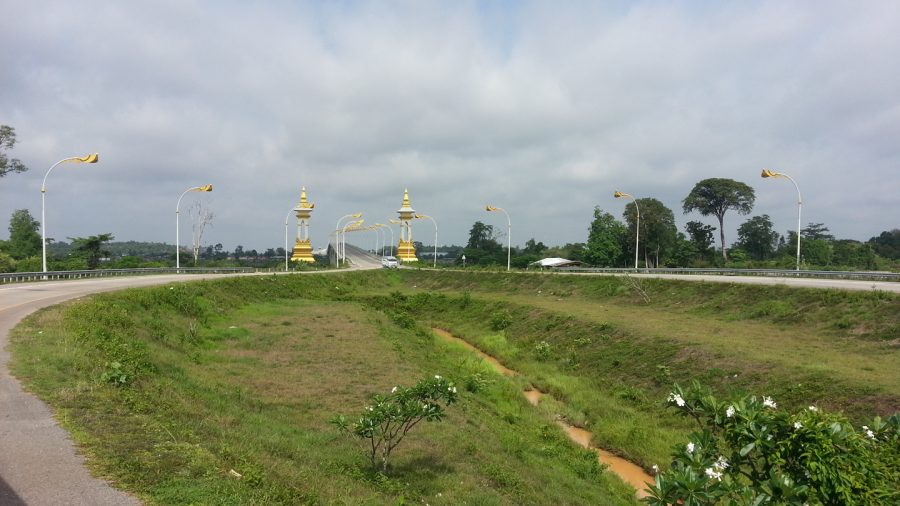 Let’s get to Thailand. 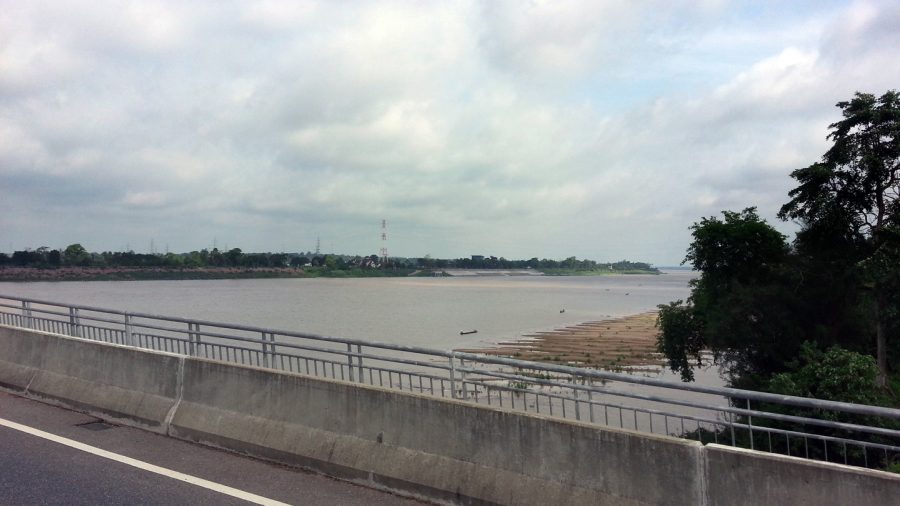 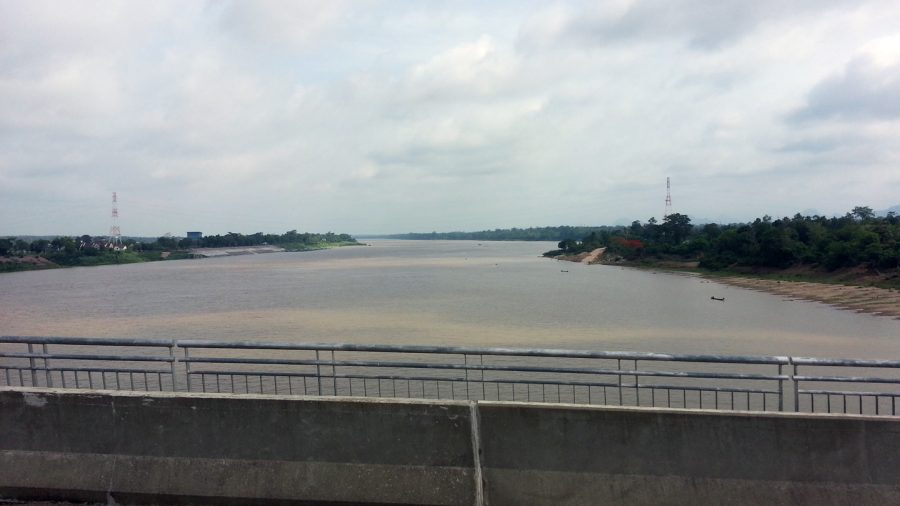 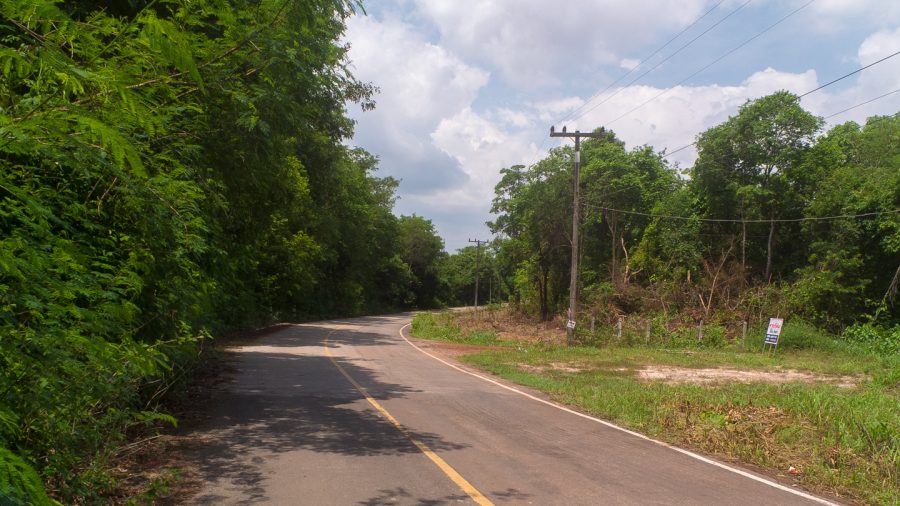 And that’s it. The crossing was pretty smooth. I filled again the same papers with name, surname, passport number blablabla and 10 minutes later I was on the other side with 28 days allowance for free :-) That’s very good! I’ve just quit the main road to get on this nice shortcut across the forest. The road and the weather are very pleasant. That’s a nice welcome :-) 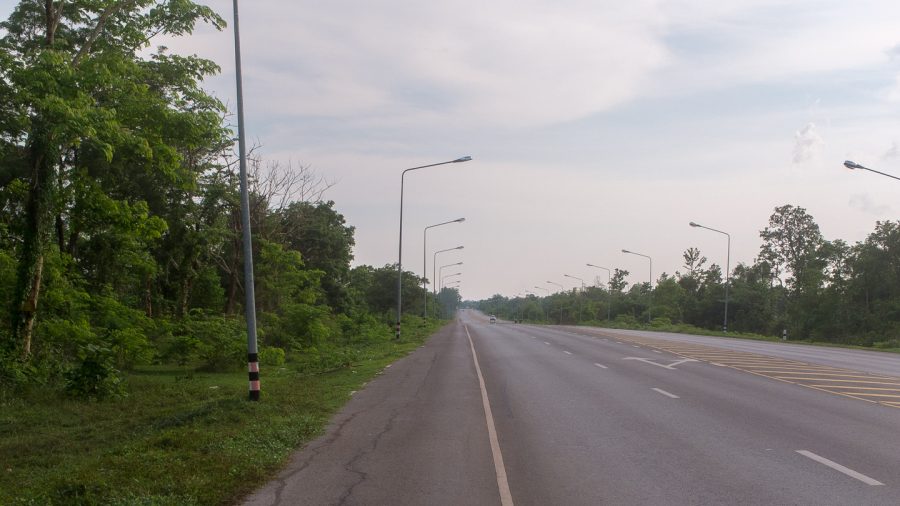 Back on the main road. Fortunately the traffic is very light. It’s wide, impersonal but Woosh! I’m so fast!!! 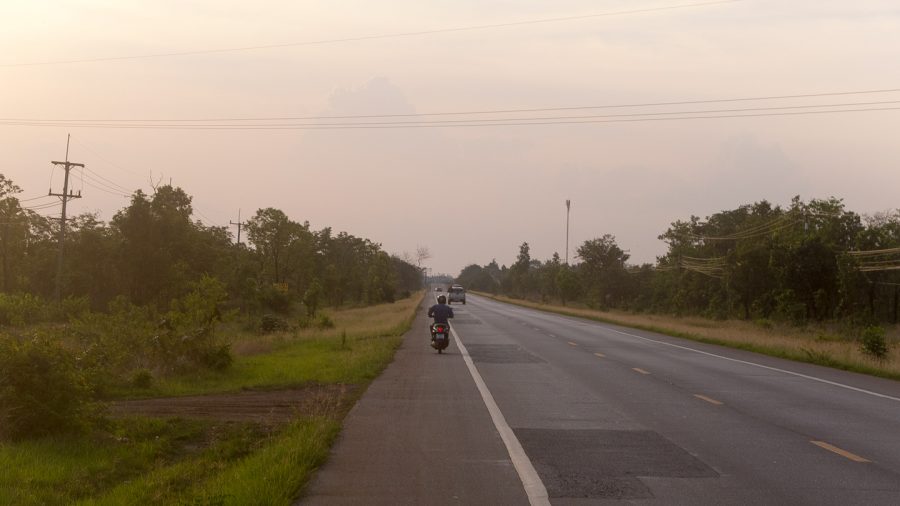 Do you think I’m going to overtake this scooter or it just passed me seconds ago? 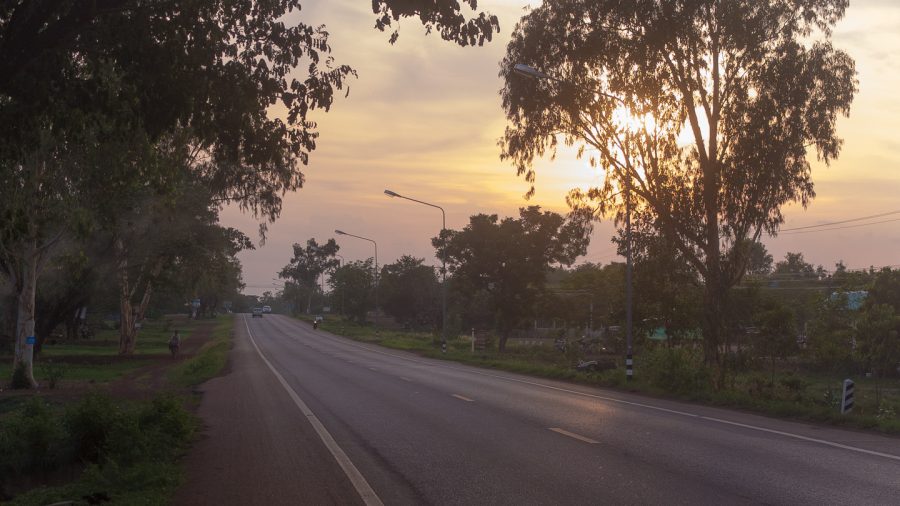 Soon I will have to find a nice and cheap restaurant.

Aaah, that’s where I will have my dinner for sure :-) 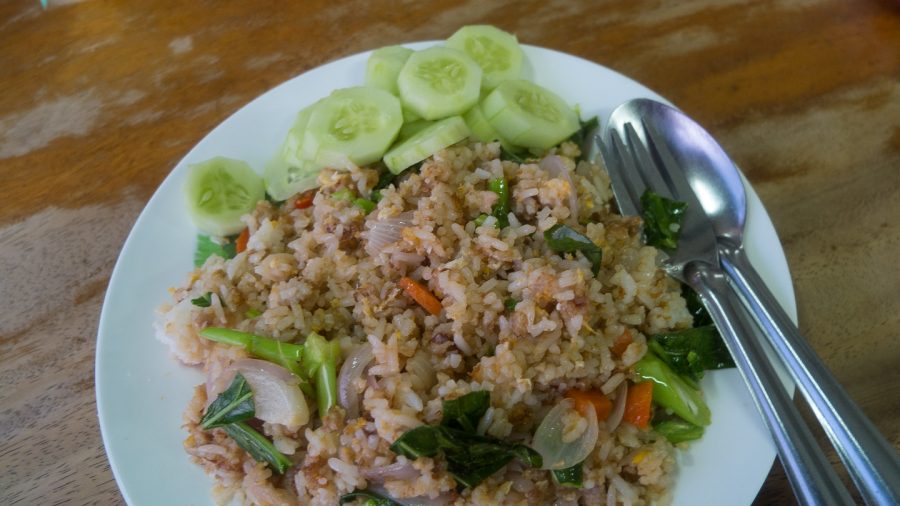 Huh? where is that noodles soup? Really? I can have something else? Great! Vegetarian fried rice then :-)

I had my dinner and then kept on looking for a night spot. Few kilometres later, on the right side of the road, there was a large empty field with toilets on one corner plus one tree next to an electric pole in the same area. I stopped there, walked around with the torch to check if I could make it until someone came by. The guy spoke few words of english. I explained what I was planning to do. Then another guy joined us. They certainly understood I was an honest guy because one of the guy opened the toilets for me and turned on the light. Five minutes later, they wished me good night and left. Cool! I’ve got water, toilets, shower and a sink to wash my clothes. That must be another of these 5 stars free hotels you can find along the road passed 6pm ;-) Cheers!