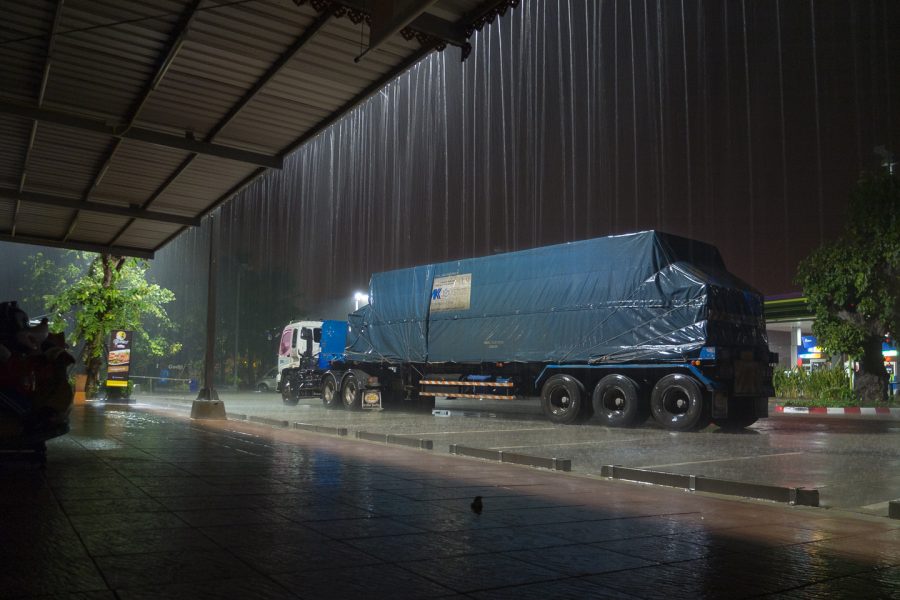 As planned, I cycled this morning towards the next checkpoint. Until now I used to travel from remote place to remote place and stop during the day in Café but now I’ve broken that pace. That’s why this morning I cycled directly all the way to the next stop so later this afternoon I will be able to sleep between petrol station again. Except that, that next petrol station had a very nice spot again. At the back of the area, behind the buildings, next to a lake, out of the noise and close to the toilets, there was a very clean shelter with benches. How to resist? I didn’t :-) 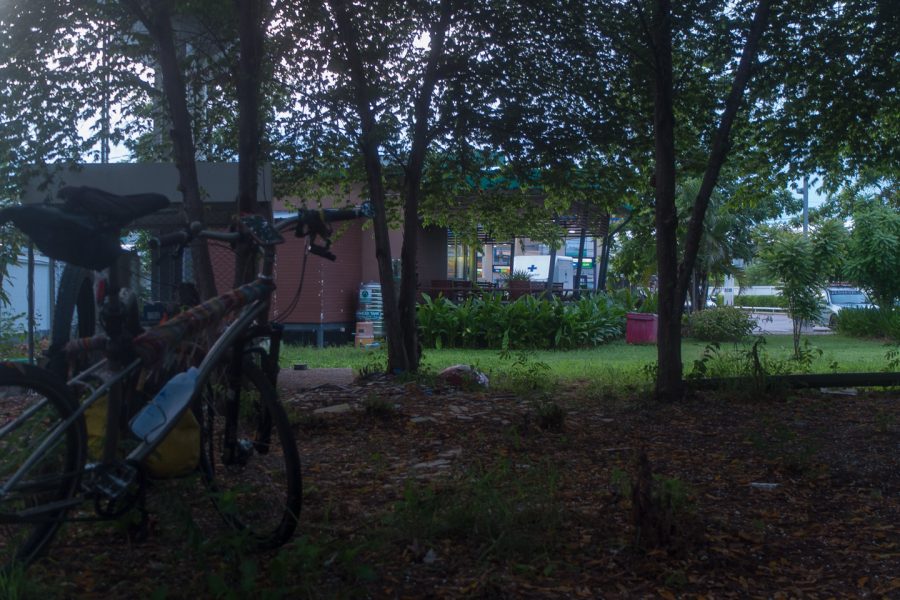 The picture is the one I took yesterday because it represents perfectly where I slept last night simply because it’s the same spot :-) 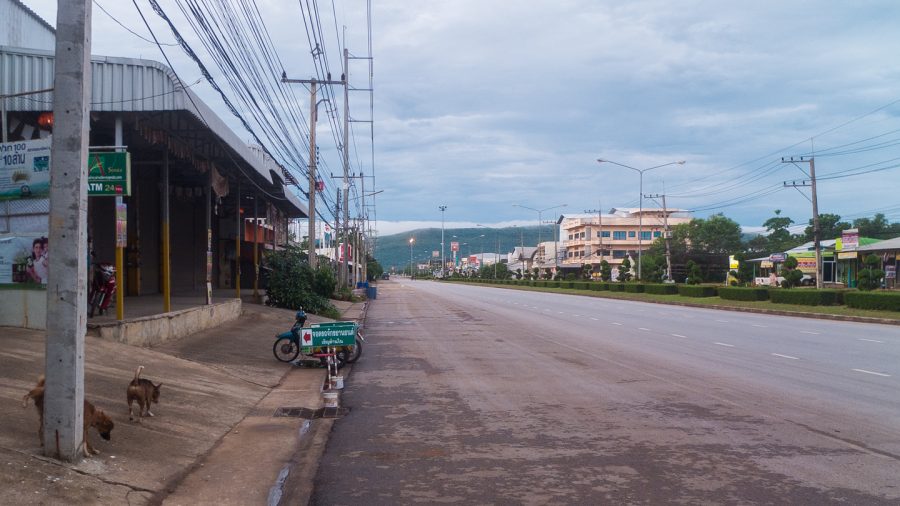 This morning I’m on the move! (Those to dogs are going to pursuit me very soon). 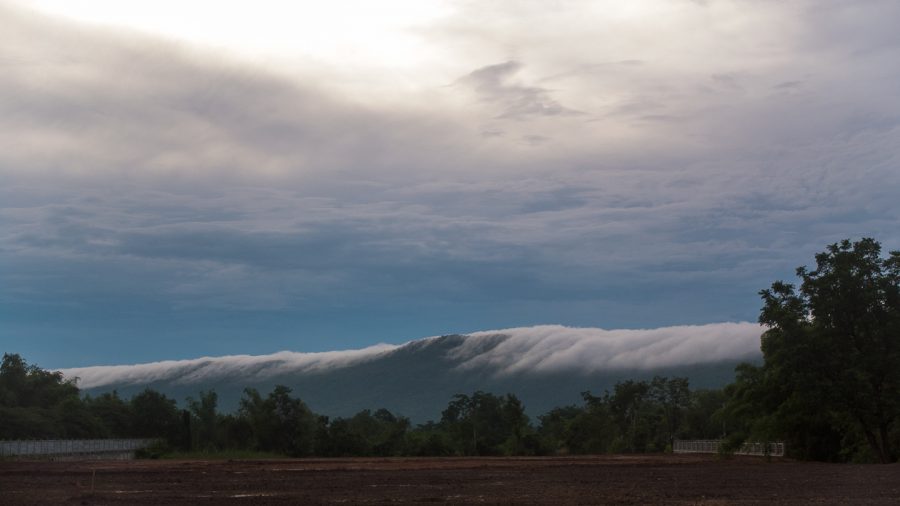 That’s a nice cloud’s wave going over this hill. 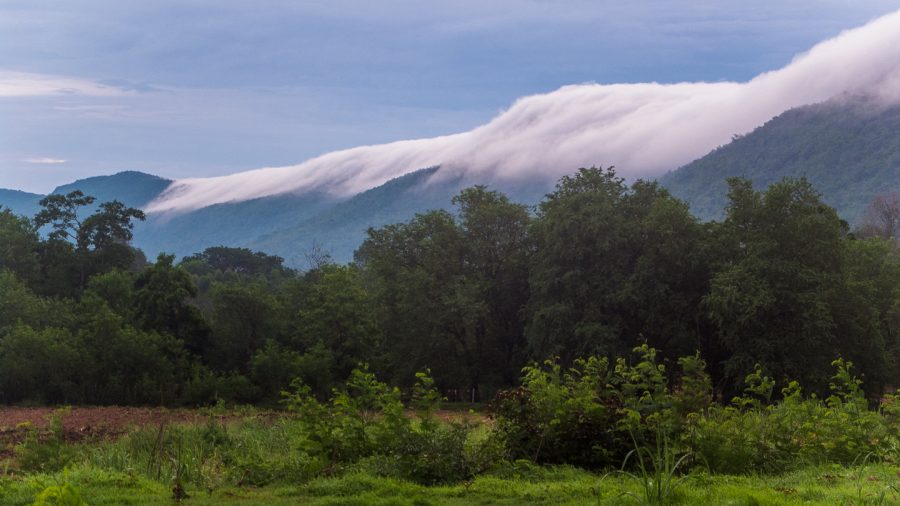 I could make a time lapse but I prefer cycling asI left only 3 minutes ago. I will see some more later I’m sure. Let’s keep on moving. 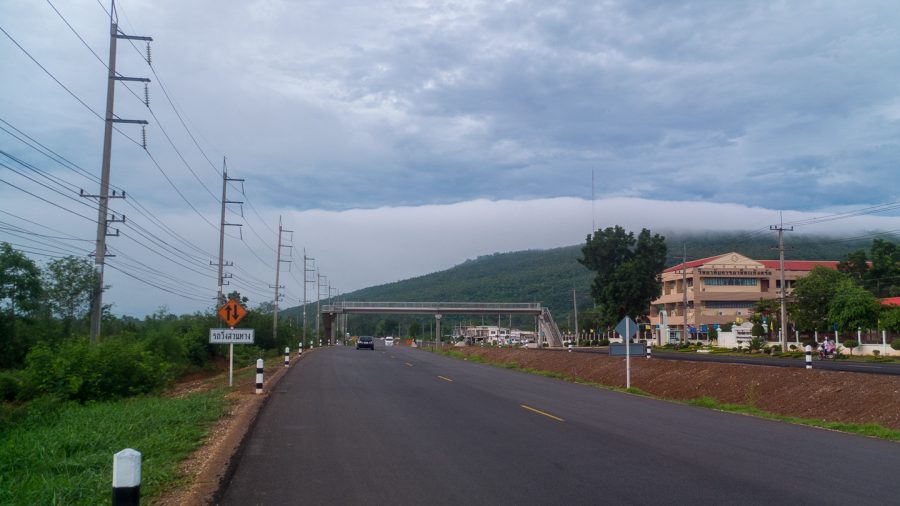 The sky has different layers of clouds this morning that creates an optical illusion. The down part are clouds going over the hill (see the right hand side). The top part are higher clouds. You cannot see the sky now. The only good thing is that it’s not hot :-) 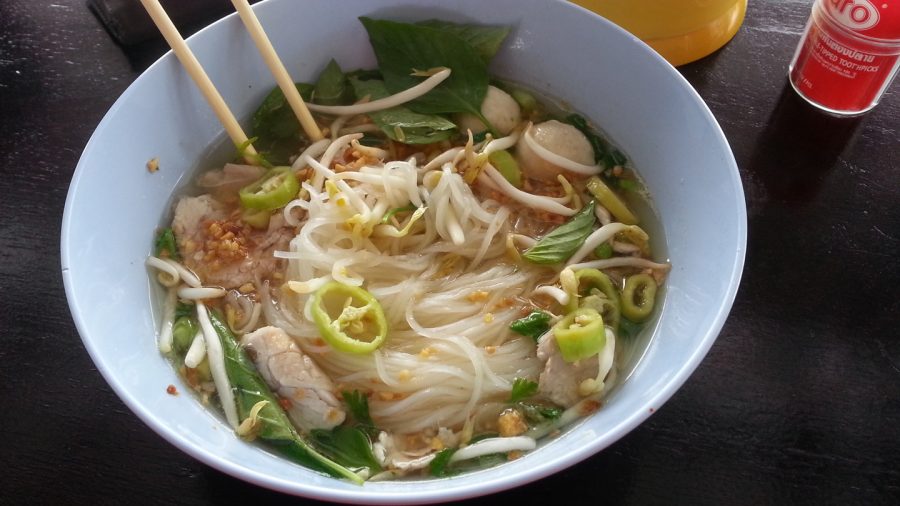 Breakfast time with a noodle soup. 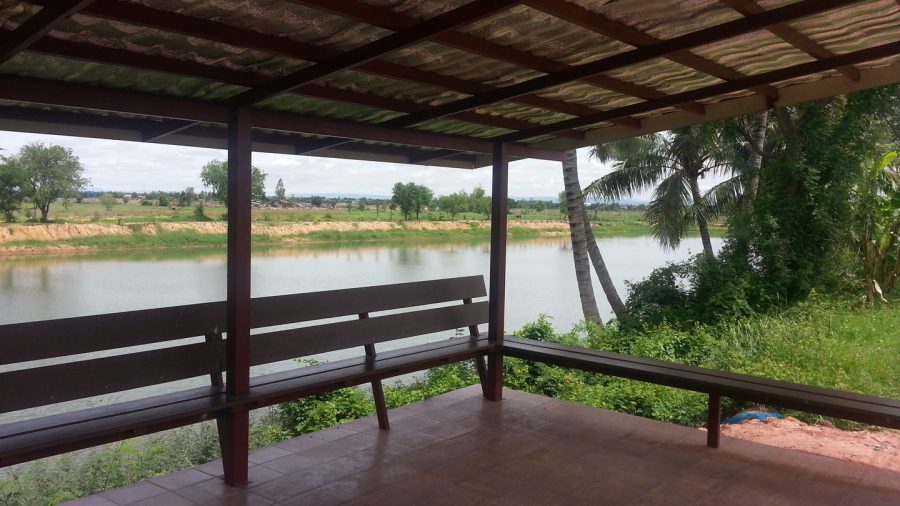 About 3 to 4 hours later, I arrived at the next PTT petrol station where I will even stay tonight I think because this seems to be a very good spot. That’s a nice and solid new shelter behind at the back of the station. I can even stay here to work this morning and will charge my laptop at the café this afternoon. 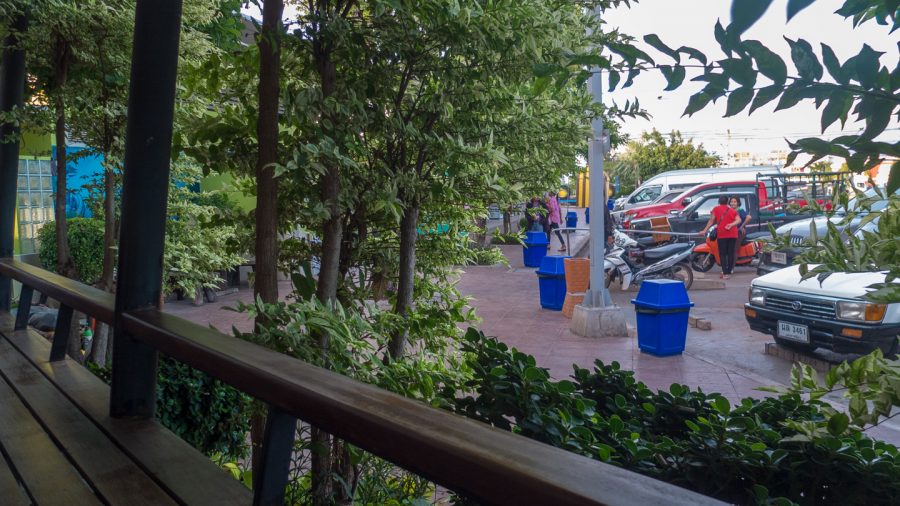 Lunch has passed. I’m now at the Amazon café. Very original I know but that what it is! :-) 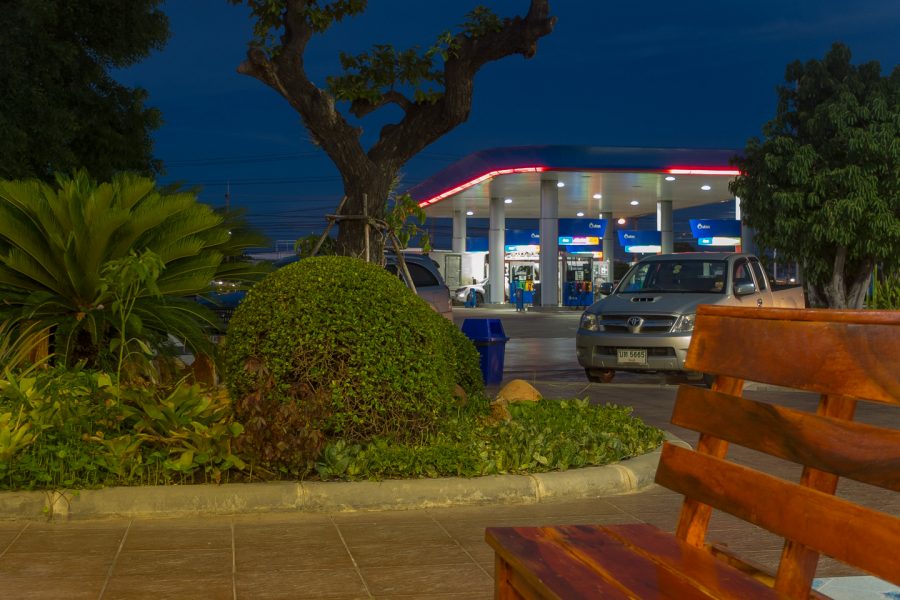 I stayed their until dark. 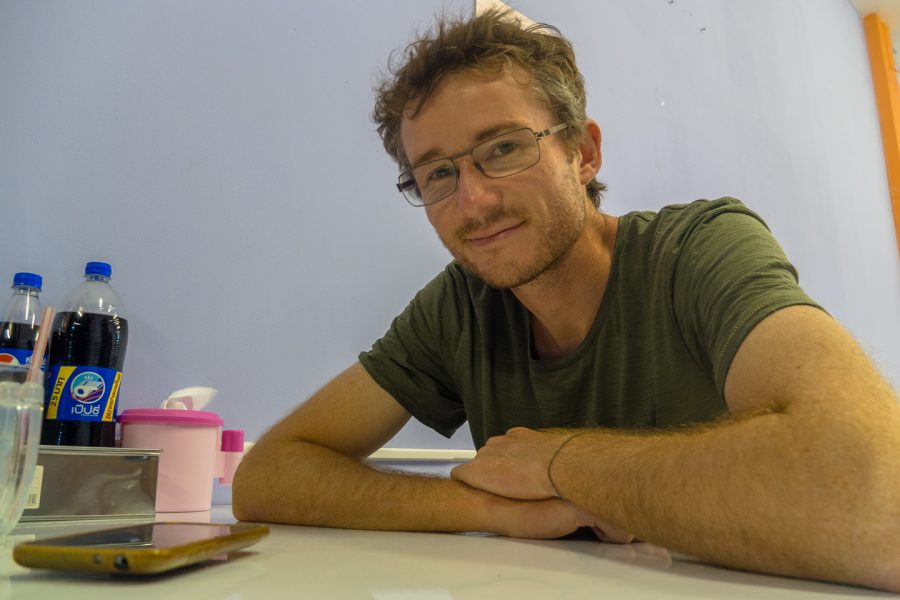 I didn’t want to cook tonight and came back to the same place I’ve been to few hours ago. I chose the same dish except that tonight the price was different. People are not the same who worked few hours ago. When I was ready to pay, the woman made a very short pause before she asked me for the price. This time, that was 10baht higher than for lunch! I tried to explained that I came here earlier and the price was 35, not 45. A customer who spoke a bit of english told me: “Egg is 10 baht, that’s why”. “But I had exactly the same meal few hours ago”. Fortunately, there was one guy who was still working here and confirmed he saw me earlier. Then the woman said. “Ok ok, 35baht, no problem”. So I guess, this one tried to rip me off but I nailed her, rah! 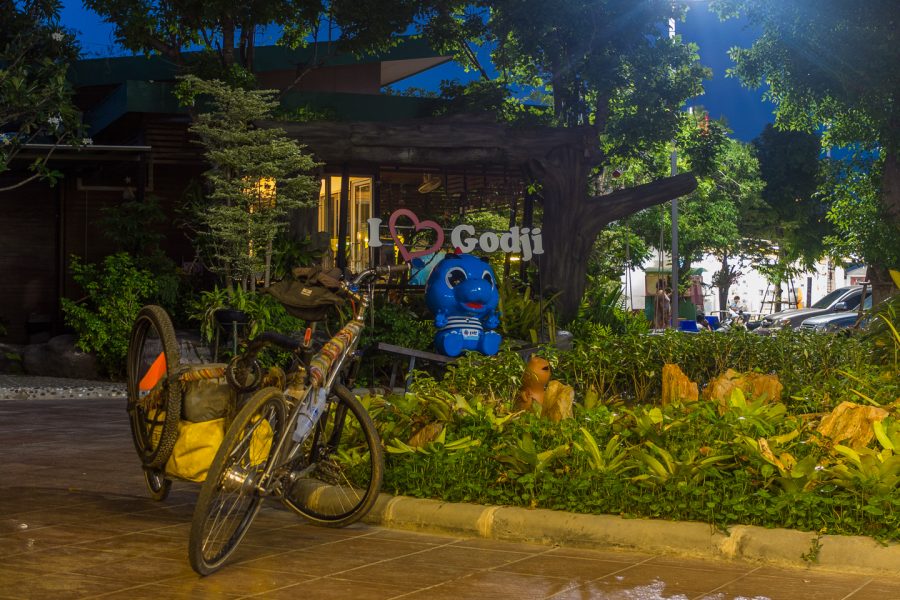 From where I sit I can still see the Amazon Café and my bike of course, always :-) 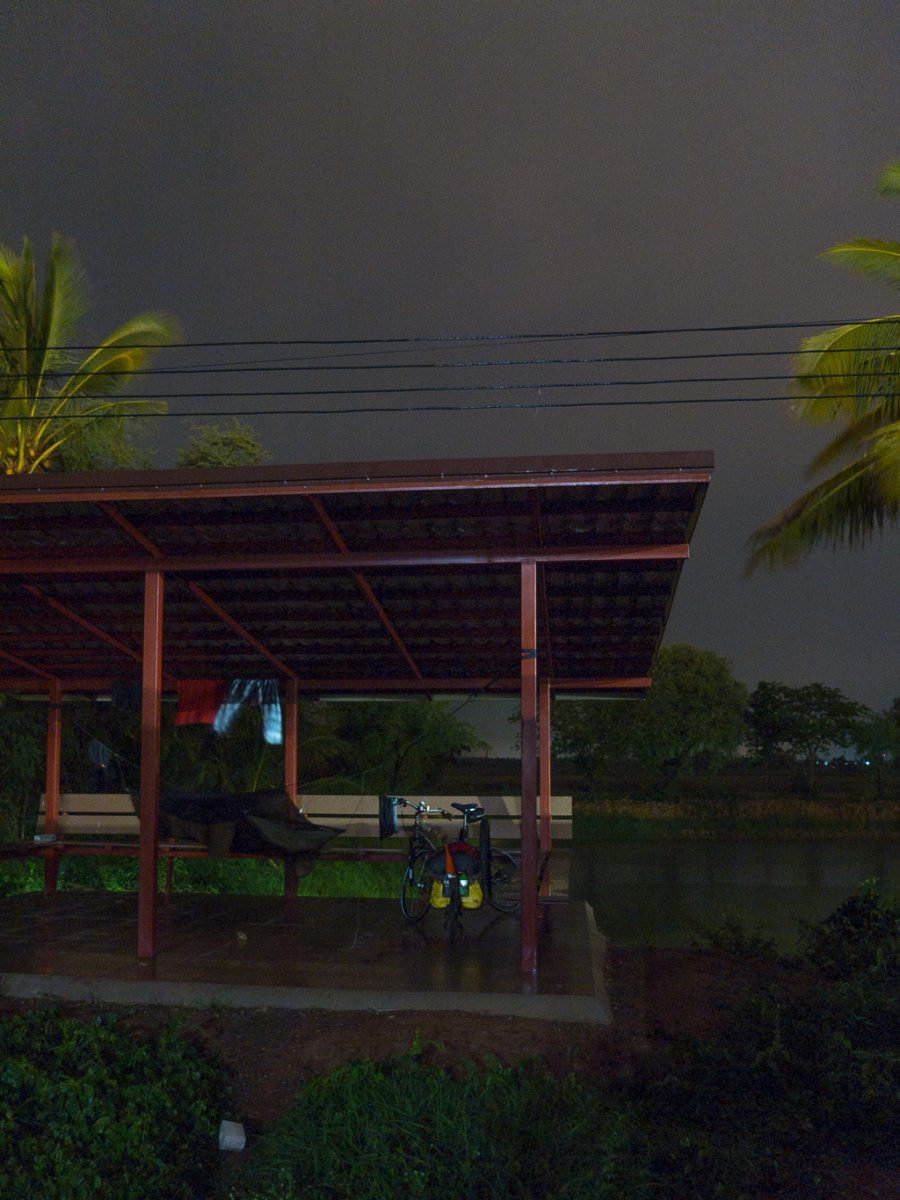 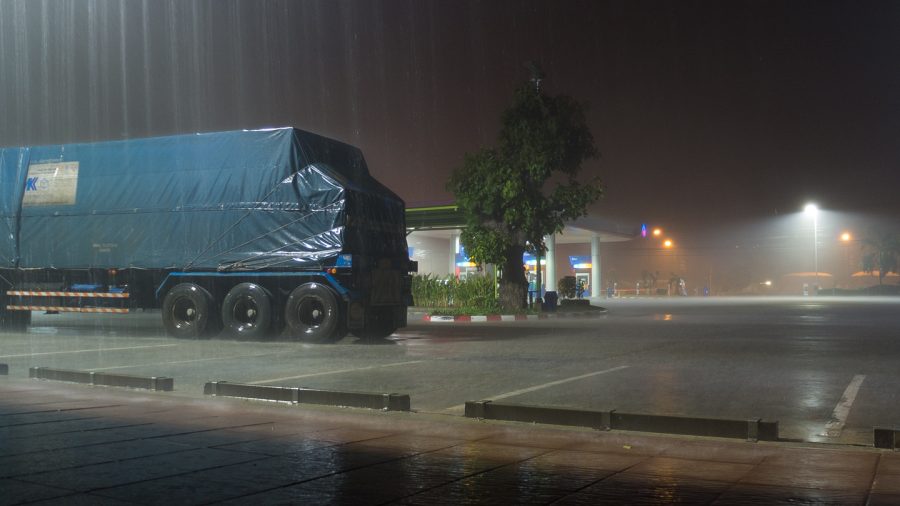 Around 11:30 as I was comfortably sleeping, the wind rose suddenly. That the kind of strong wind you know carries a storm. Now I get use to it. Without any wind, I would have stayed here but in this case I’m sure I will get wet. So I packed up my hammock, make sure everything else was well sealed and moved back to the front of the building to avoid the rain coming pushing by this wind. 5 minutes later, it was pouring rain. 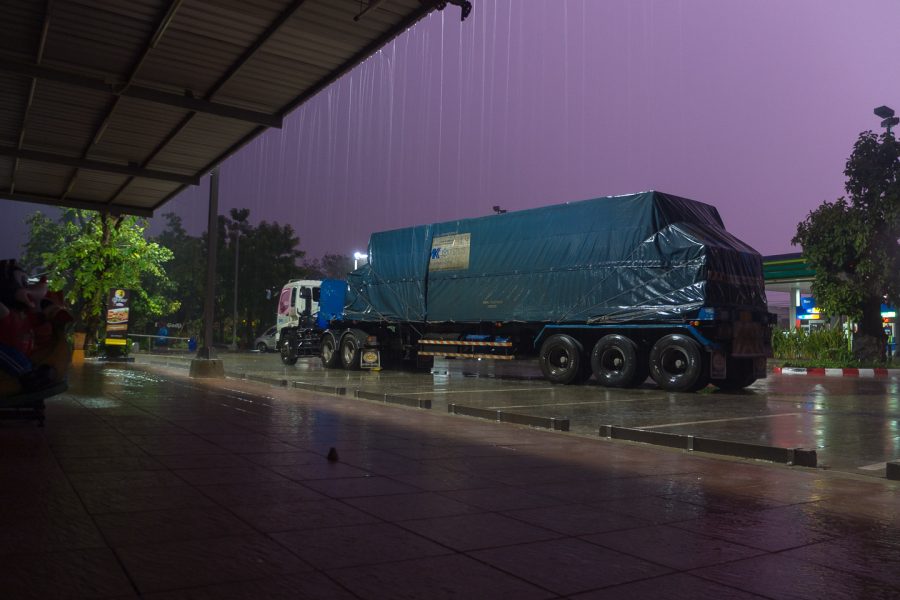 Lightings were omnipresent and light up the whole sky at a fast pace.

Once, the storm moved away, I came back to my spot where I left the bike and reinstall my bed. I could continue my night :-)