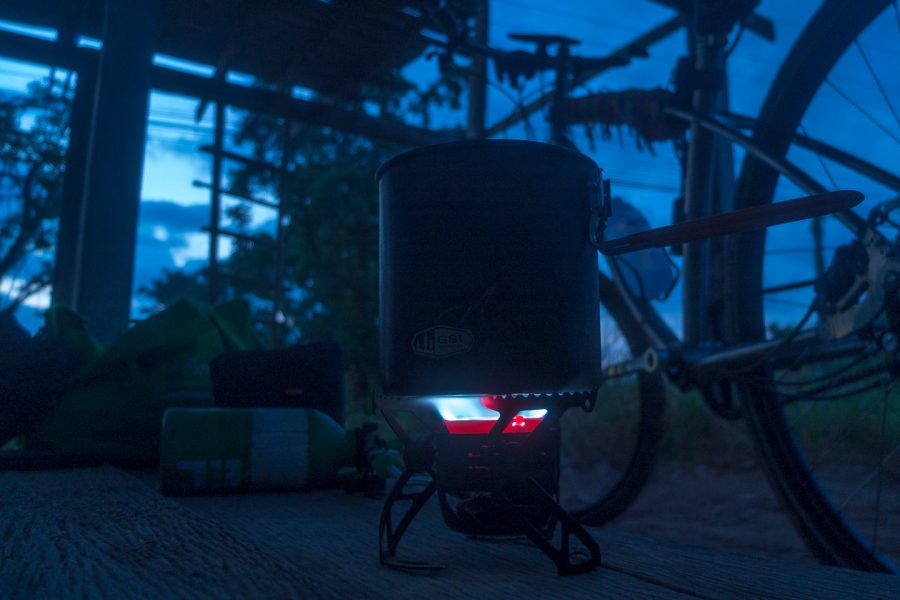 I’m not really in hurry these day: today is one of my slow record. Another easy day with no particular events. Last night was a lot more quiet compared to the Chinese temple so I could recover a bit. Once all packed, I cycled to the next PTT petrol station, stopped for the day until 5 or 6 when I came back on riding during late afternoon. I ended up in a half finished or half broken building with a remaining roof, the only thing I’m really looking for. I cooked dinner, browsed a little the news on my phone and slept. Simple! 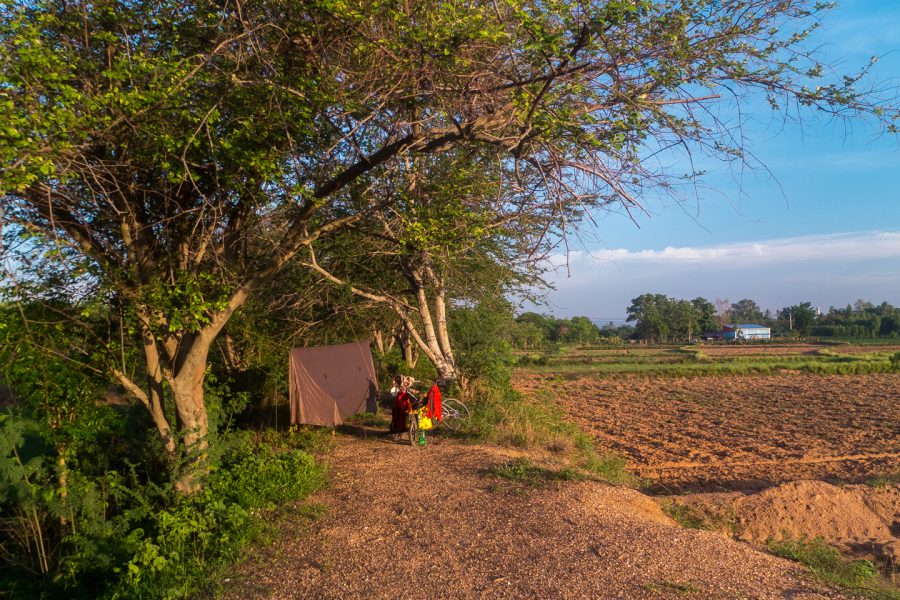 That’s where I slept yesterday night :-) Unfortunately, I had to set up the roof because I could distinguish dark clouds coming the same direction as the wind but finally it did not rain. I don’t like to sleep with the roof for many reasons:

All of those points are quite obvious and that’s why, when possible, I managed to find a place with a roof. In short, the less I use it, the best is it :-) 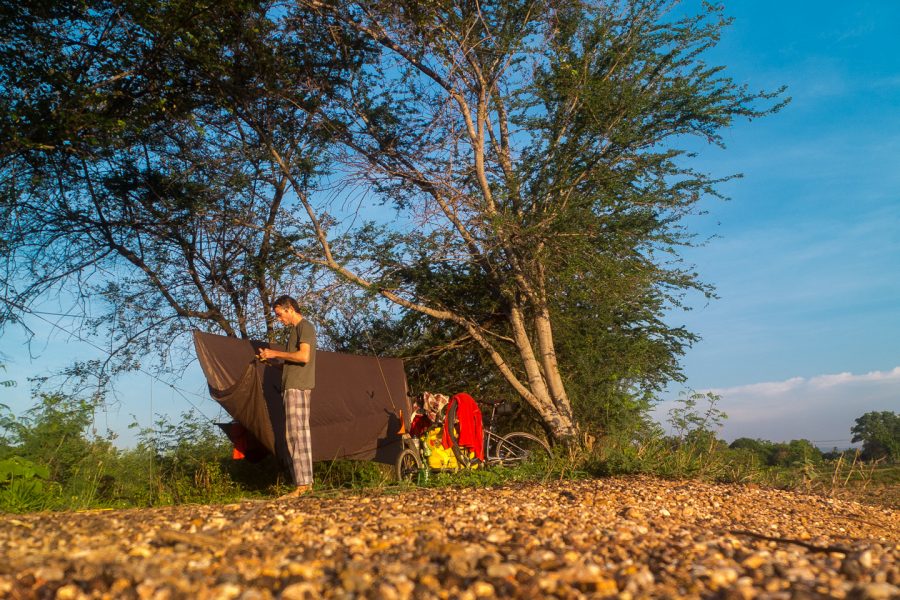 Let’s pack and go. I think I’ve said that hundreds of time already :-) What else can I say? Nothing? maybe… :-) 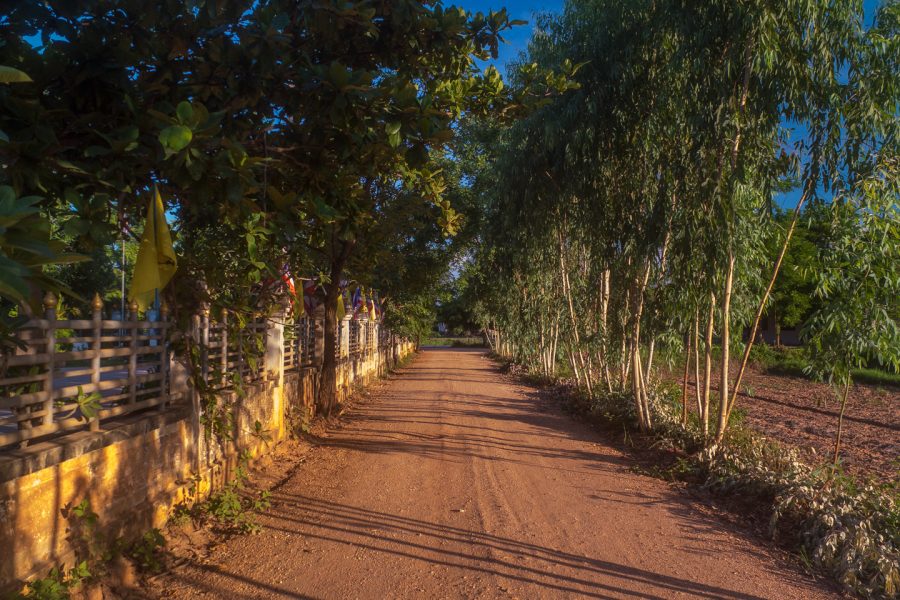 I slept only few hundreds metres from the road and that was enough to avoid the noise coming from it. 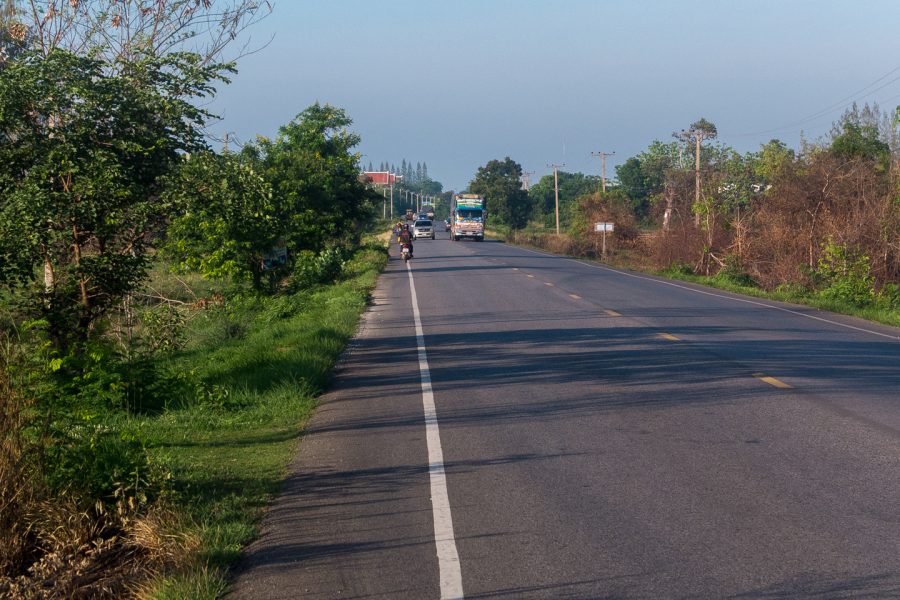 Amazon Cafe time! I won’t repeat again what I’ve done there as it’s all the same as the previous days but I will describe how to manage to stay clean every day for free. It might interested some future cyclist maybe.

Thailand is a hot country which make things easy. For example, in New-Zealand the weather is not as clement and taking a shower at night, in the bush, can be… cold! Since Australia now, I’ve had cold showers most of the time. But since Australia, the temperatures have been a lot more pleasant and even hot.
Coming back to Thailand, here, you can go to any public toilets (in petrol stations for example) and have a cold shower which is very nice. The way the toilets are set up makes it very easy to have a shower. There is always a big container with clean water next to the toilets and a big plastic bowl. You don’t need more than this :-)
Indonesia, Malaysia, Thailand, Laos, only few of the non touristic places use toilet paper so most of the time you deal with your hand (the left one) and water. At the beginning, you might think it’s dirty (especially when there is no soap provided so bring your own) but after a while you get the idea. Having the opportunity to clean yourself with water after each session is very nice (but it’s not ecological). You feel fresh :-)
Now, what I’m doing is, I even wash myself wearing my short and t-shirt. That’s a “technique” I learnt from a friend in Australia who used to do this when he was in the navy. Very efficient :-) In less than an hour, I’m all dry and clean, and my clothes too ;-)

I always carry at least one litre of water unfiltered with me in case I do a night ride and sleep somewhere in the bush or stay too far from public toilets. One litre is enough if you do it carefully and thinkfully:

That’s it, your are clean! At least, clean enough to sleep well. Of course that excludes to wash you hair. I used to wash my air during the day anywhere where I could find water and then at night that “one litre shower”. 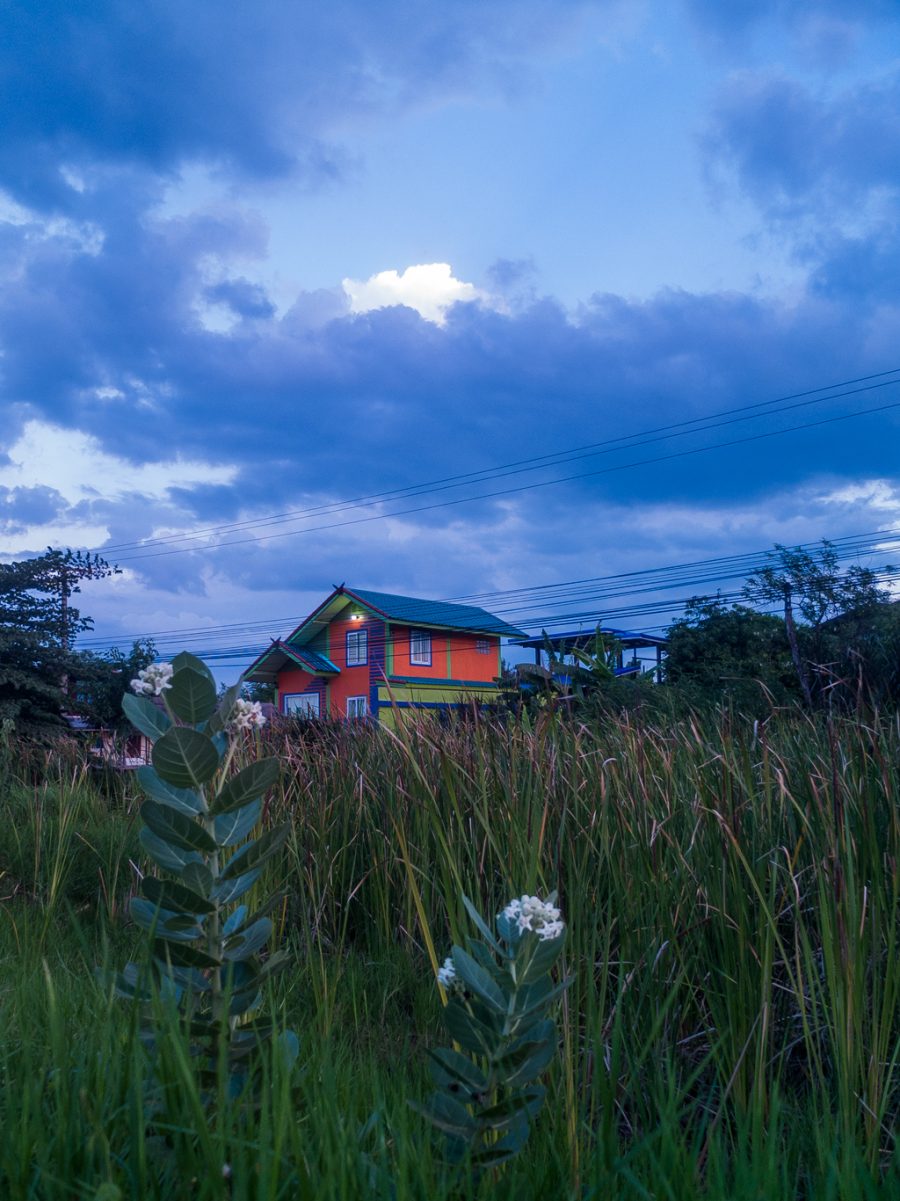 I’m ready for another evening ride again. I left 5 minutes ago and found myself stop again because of this house. That’s definitely a colourful one! 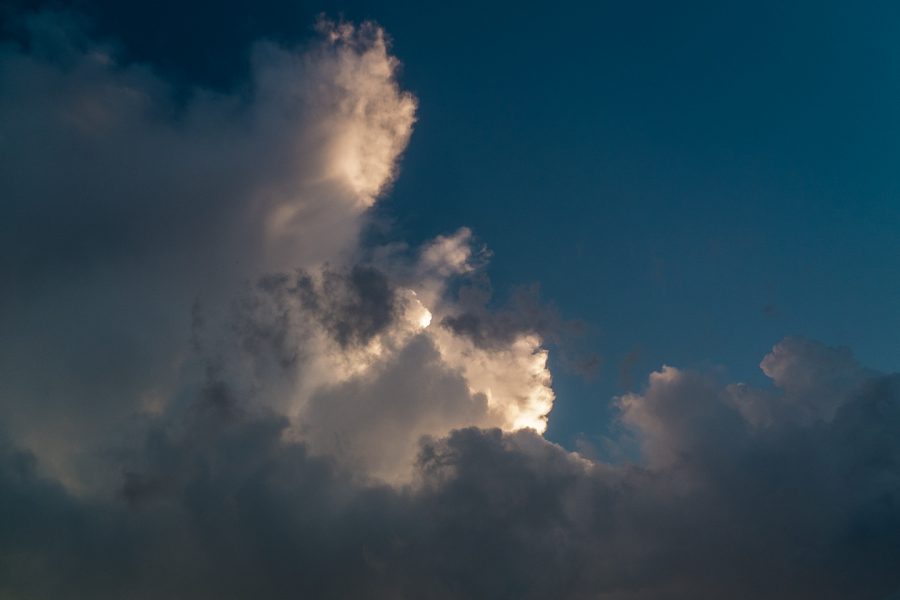 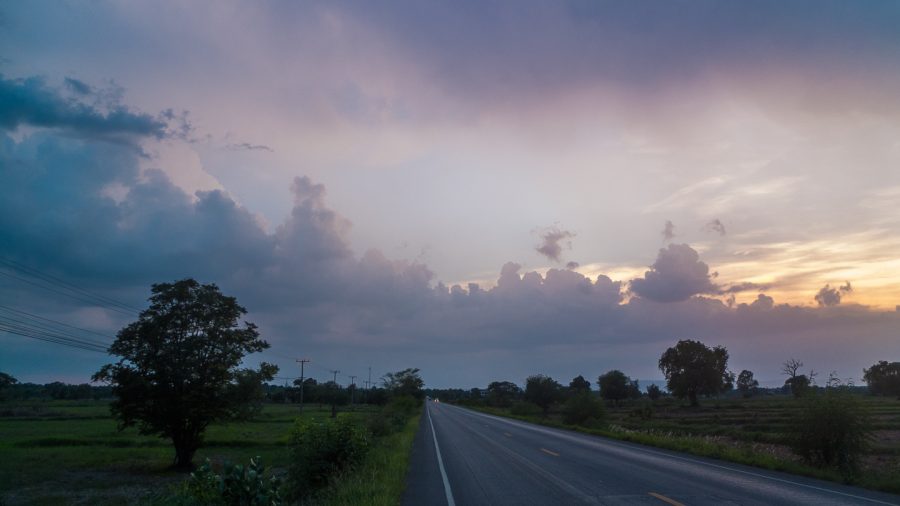 I’m not going the right way I guess. Come one clouds, move on. 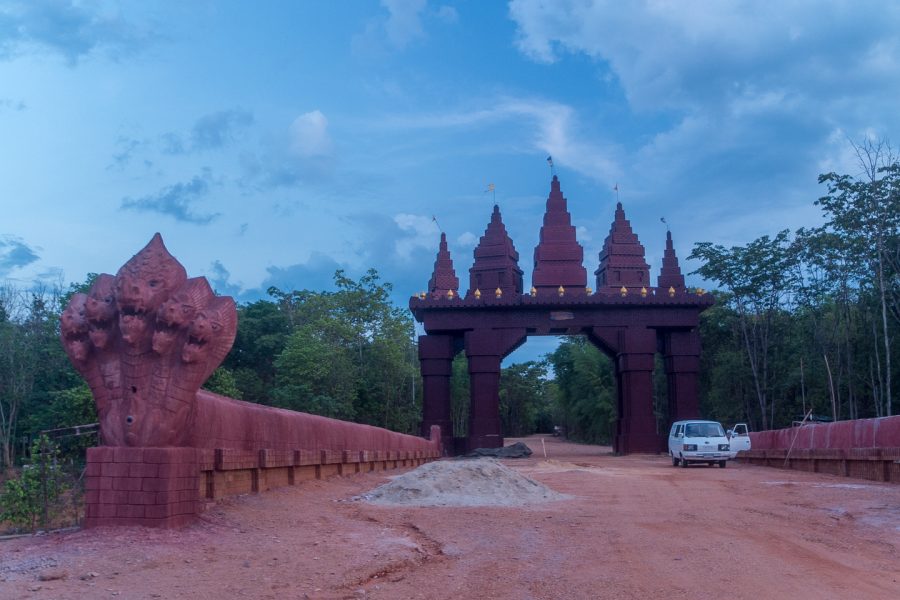 Mmh, that’s an interesting door, entrance, whatever. If it would be later I would have tried to stop here for the night. 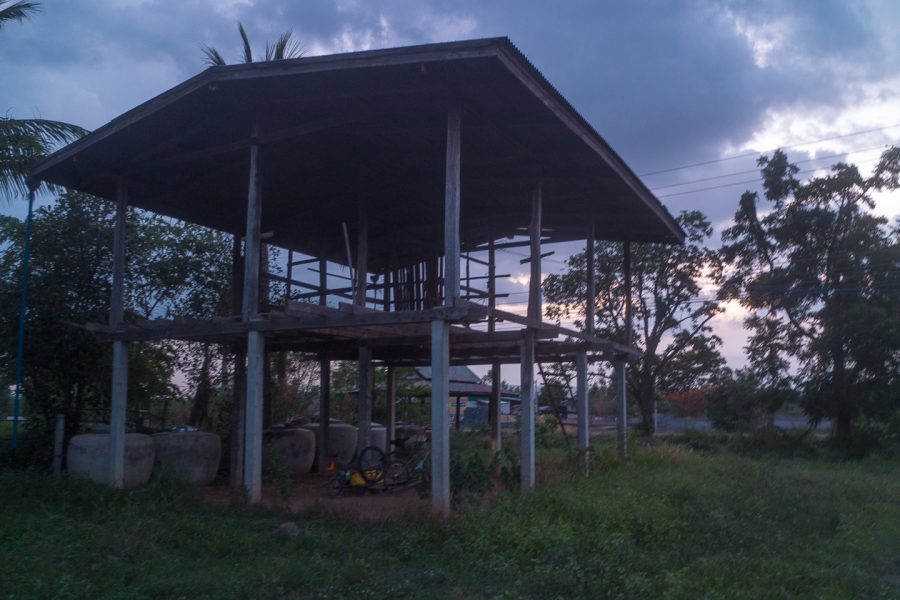 Finally I’ve found a good spot. I’m in a village where I I’ve seen that unfinished (or half destroyed) building on the side of the road. All I want is a roof, the rest I don’t really care. I just hope I’m not going to wake up some “4 legged animals” that I don’t really like in this country. For now, everything seems good. I’ll be as silent as possible… 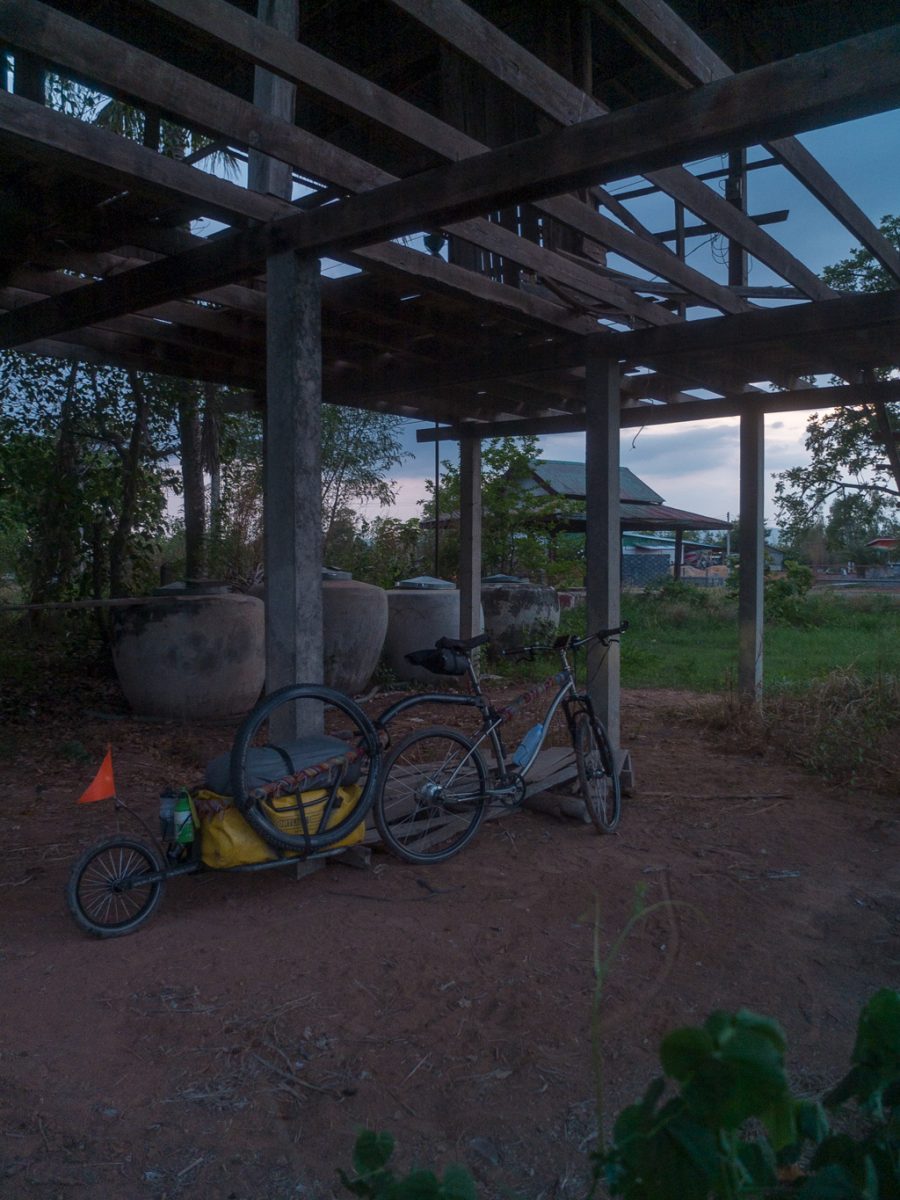 Lots of space, not dirty, lots of different options to set up my suspended bed, nice :-)

Let’s boil some water to cook some noodles for dinner. Since Laos, I’m cooking more often because the food was more expensive their. Few days ago, when I left the temple that rainy morning, a guy who worked there gave me two packets of noodles. That’s a free meal tonight :-)

After dinner: one litre shower, teeth and bed. See ya!